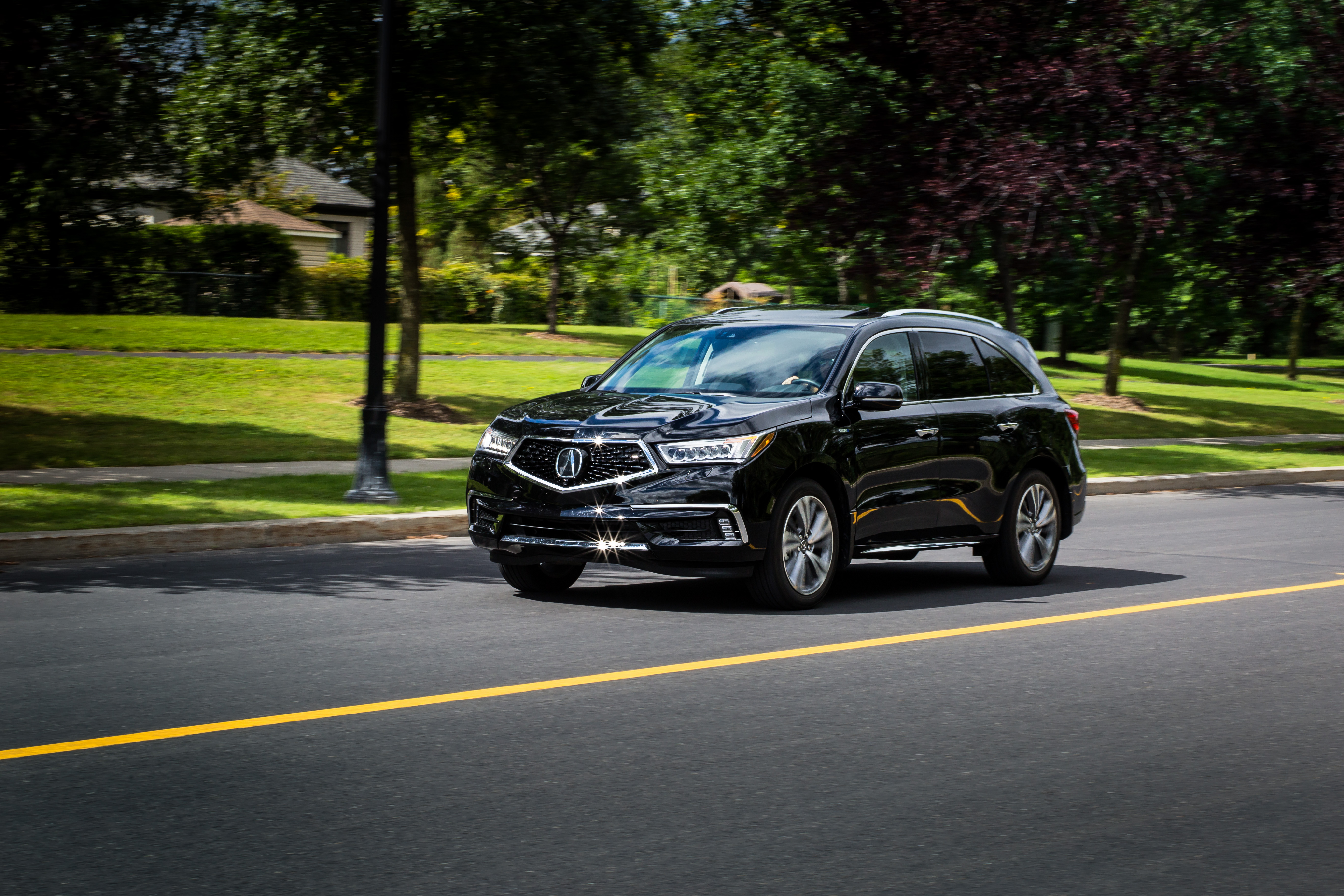 I’ve already said what has to be said about the Acura MDX. It’s a great luxury seven-passenger SUV, one of the rare examples out there that harmoniously blends day-to-day common sense with engaging driving dynamics, all while remaining competitively priced. If I had a lot of money to spend on several sports cars, and were looking for a daily driver for my family and I, I wouldn’t hesitate one second. I’d walk straight into an Acura dealership and drive out in one of these bad boys way before dishing out ridiculous sums of money on anything German or even Swedish. Yes, the MDX is that good.

But now, there’s a new, improved version of the thing. It’s called the Sport Hybrid, and it’s been crammed with Acura’s innovative triple motor, super-handling all-wheel-drive system, the same tech that allows the NSX supercar to blast around apexes. For the MDX, the goal isn’t just to improve its already impeccable road-holding abilities, but also to be a little more gentle to Mother Nature. But does it actually work? 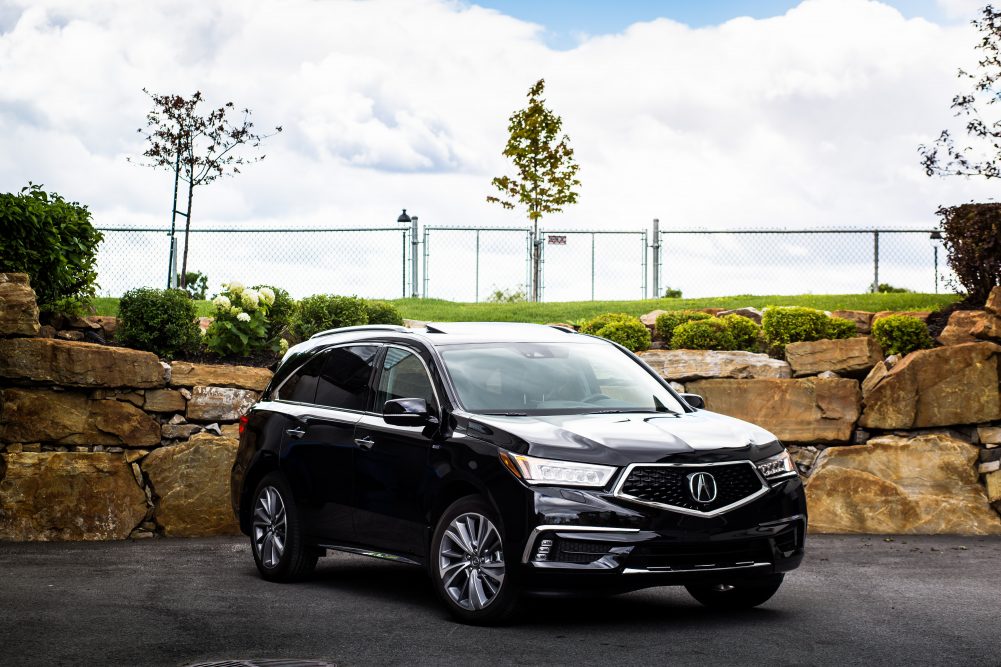 Aesthetically speaking, nothing really changes for the Sport Hybrid. Except for a pair of hybrid logos on each side of the car, and the SH-AWD moniker on the tailgate painted in blue, this is the same elegant, but also kind of dorky looking mom mobile we’re now accustomed to see crawling around Costco parking lots. The MDX was the first to inherit the Acura brand’s new pentagon grille, which is now also available on the facelifted TLX, with new, enlarged Jewel Eye headlights. It’s not that the new treatment worsens the vehicle’s overall appearance, it just gives it some odd, cartoonish demeanor that I somehow can’t help myself from smirking at. Perhaps things will change with an official, new-from-the-ground-up model. At least it’s more coherent than the previous chrome beak shield. 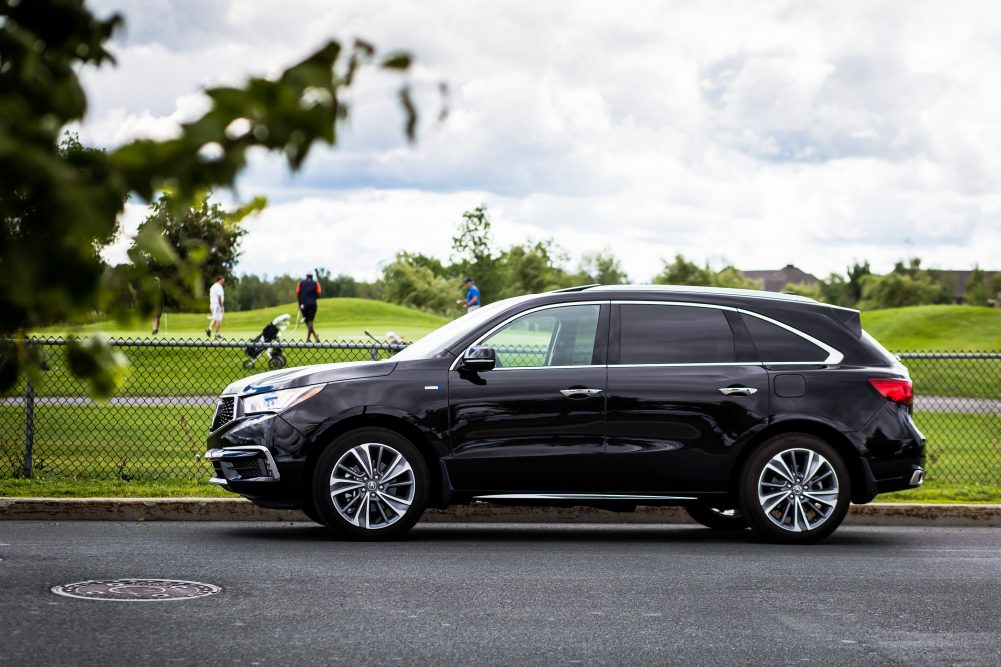 Where the Sport Hybrid truly gets its merits, is in the technology that was crammed underneath its body, with absolutely no compromise to cargo and passenger space. The only area where the Sport Hybrid suffers versus the regular MDX is in towing capacity. While the regular “truck” will comfortably haul around 5,000 pounds, or the equivalent of a small boat, the Sport Hybrid can’t tow anything at all due to its new drivetrain. At least, it’s not recommended. According to Acura’s powertrain development leader Ken Lantz, the majority of MDX owners don’t tow anyway. Touché. 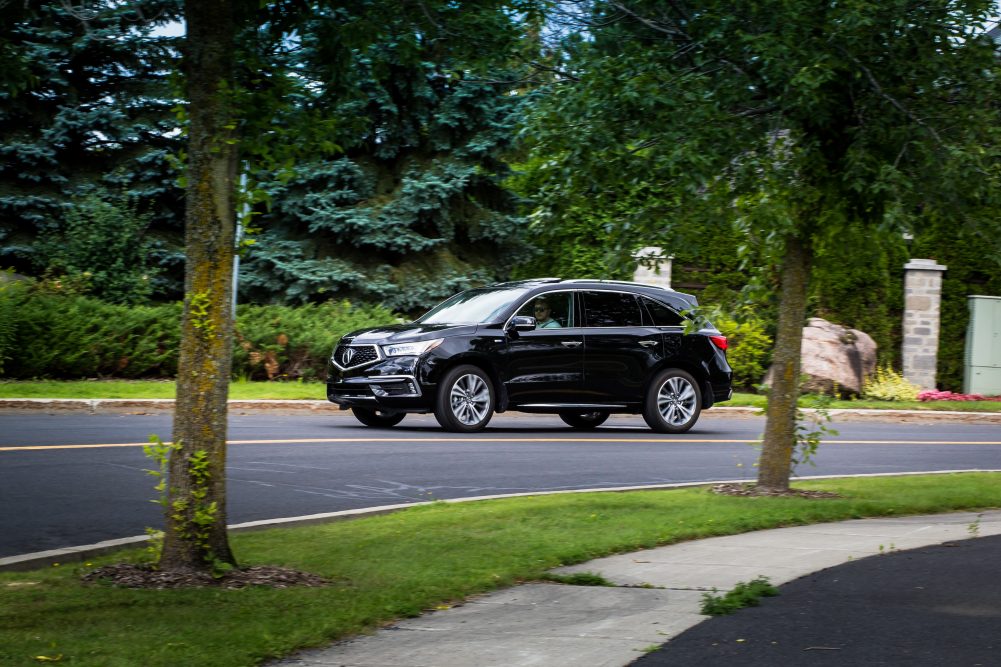 So, the Sport Hybrid gets a total of four motors to get moving, and no driveshaft is connected to the rear wheels. Unusual, yes, but it’s quite clever. The main engine remains a front-mounted, naturally aspirated V6, but displacement goes down versus the regular MDX at 3.0-liters, instead of 3.5. 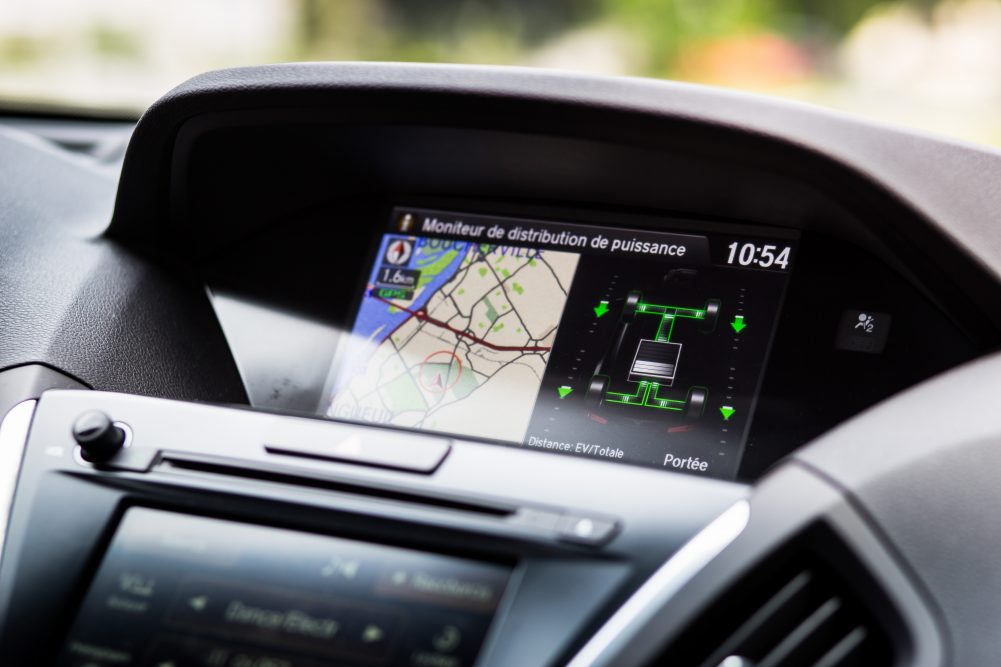 Squeezed between it and an all new, seven-speed, dual-clutch transmission sits a tiny, 43-horsepower electric motor, which has three roles: deliver additional torque, help smooth out shifts, and act as a generator. Out the rear, a Twin Motor Unit, which Acura acronyms TMU, packages a 36-horsepower electric motor on each wheel, which help the MDX get off the line in full electric mode up to about 50 km/h, and will take over during coasting speeds as the gas engine turns off. 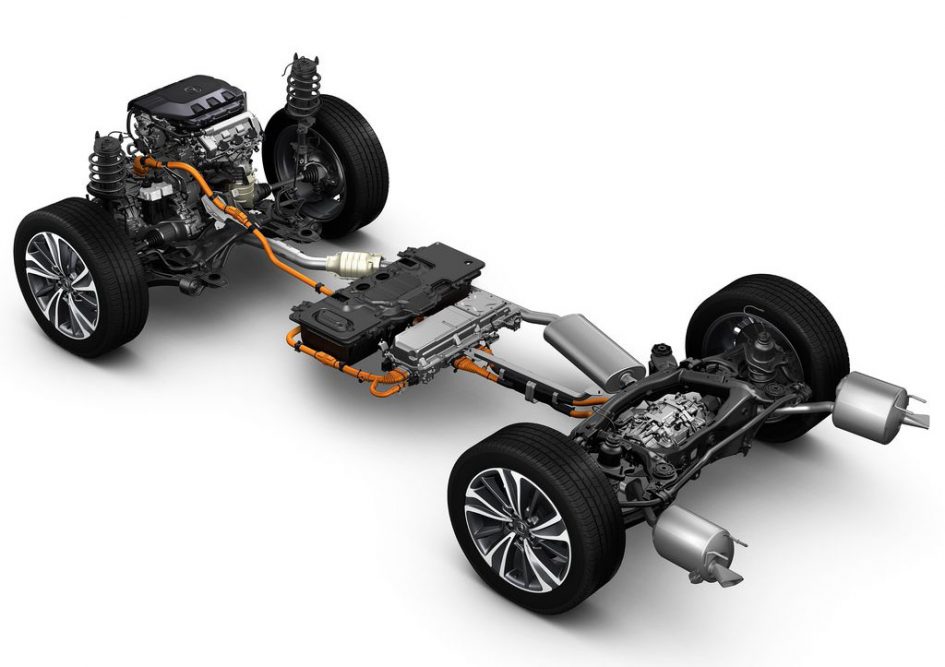 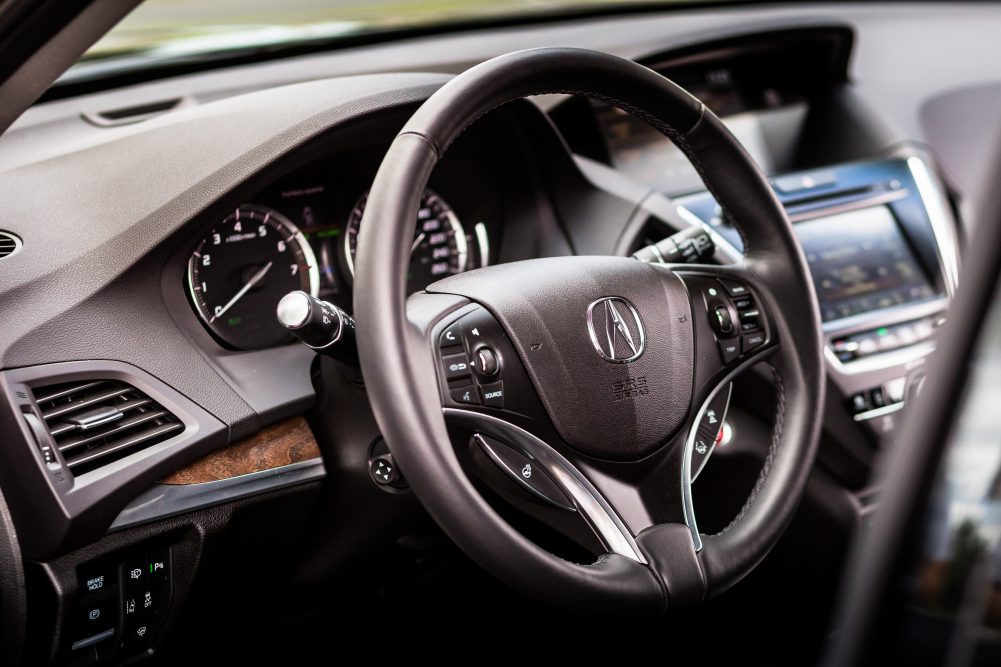 Behind the wheel, all this techno gibberish is utterly seamless, and rather effective. Not only does the combination of instantaneous electric thrust add an extra layer of vigor to the way the MDX hustles, handling is considerably improved. And the entire system works as a cohesive unit. Those rear wheels work independently to create torque vectoring all-wheel-drive, like what you get in a Nissan GT-R. When was the last time your read such a line in a crossover review? 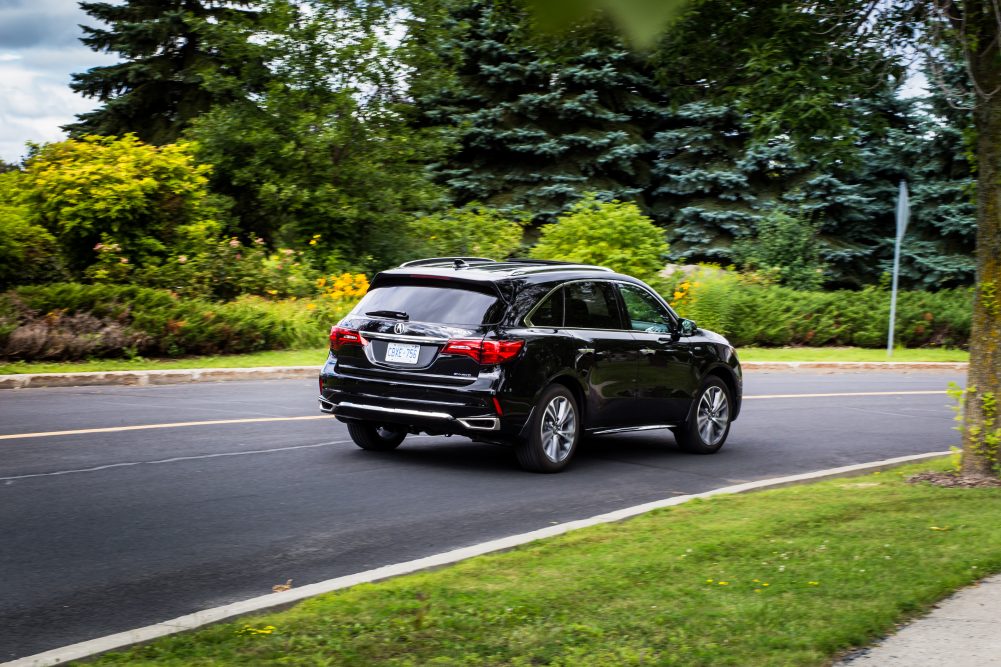 Each motor modulates its turning speed to effectively allow the rear of the vehicle to rotate according to cornering loads. In some instances, one wheel will even rotate backwards while the other turns forward. The end result is nothing short of impressive, and you’ll end up attacking corners with your 4,500-pound mallfinder way faster than you should, almost generating as much cornering G’s as some sports cars out there. 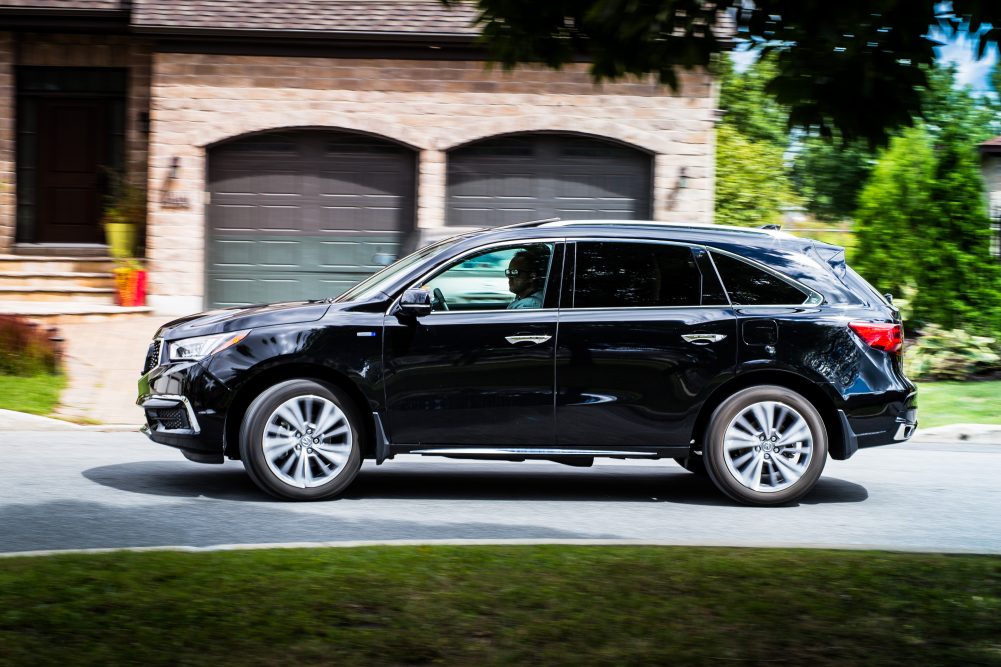 And the raspy, high-revving nature of the MDX’s drivetrain isn’t compromised either. Even if this V6 loses some displacement, it still loves to rev, growl in the low reaches of its rev range and bark entertainingly as the high cam lobes of the VTEC system kick in for maximum power delivery.But the area where I was the most satisfied with the Sport Hybrid, was the new, seven-speed dual-clutch transmission. My biggest gripe with all Acura vehicles of late, except the ILX, has always been the irritatingly laggy ZF nine-speed gearbox. That one’s gone in favor of Acura own design, and it does marvels. 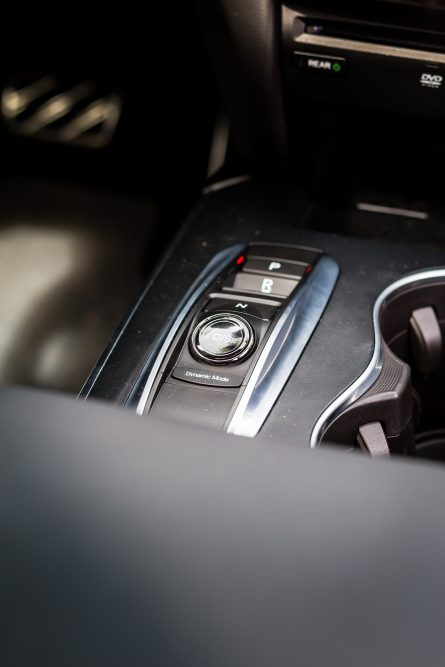 Not only is it quicker, more reactive and significantly improves the MDX’s overall reaction times, it seems perfectly tailored for the hybrid system. Sure, the dual-clutch is quick, but because it has electric motors bolted onto its wheels, the MDX gets up and goes before the transmission has even downshifted. It’s weird, but tremendously effective. 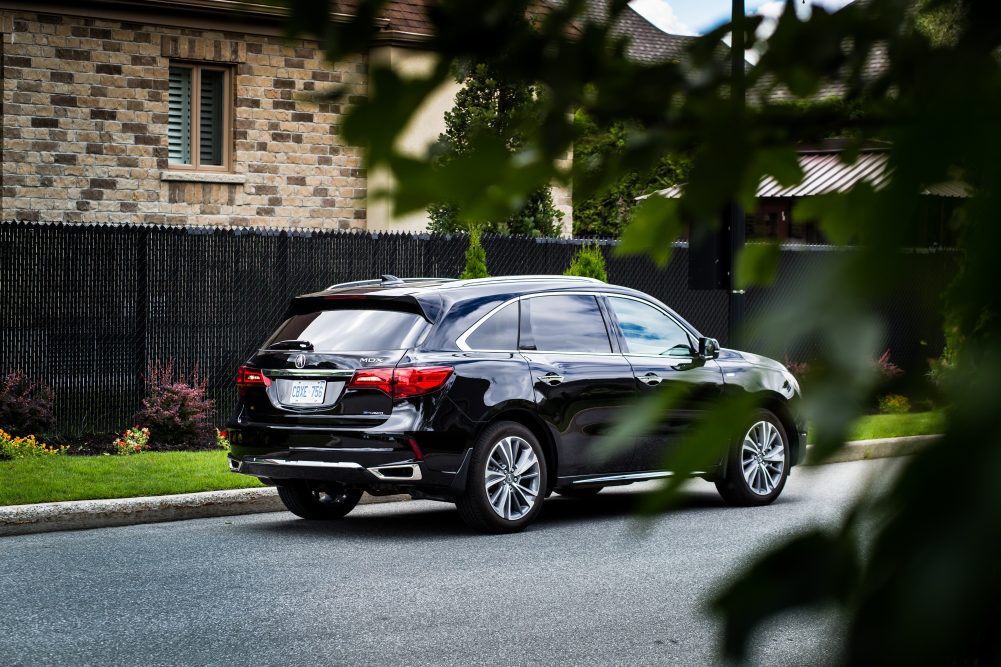 All this cool tech sounds like solid stuff during a sales pitch, and on paper, the Sport Hybrid succeeds at positioning Acura as a highly technical brand. But will it make a difference in people’s lives? And that’s where the Sport Hybrid’s premium price over a standard MDX gets debatable.

Yes, fuel economy is improved, but not drastically. Acura claims a conventional MDX will pull about 9L/100 km combined. The Sport Hybrid apparently inherits a 3L/100 km drop in city driving. During my time with the thing, the onboard computer had trouble staying under 10 combined. 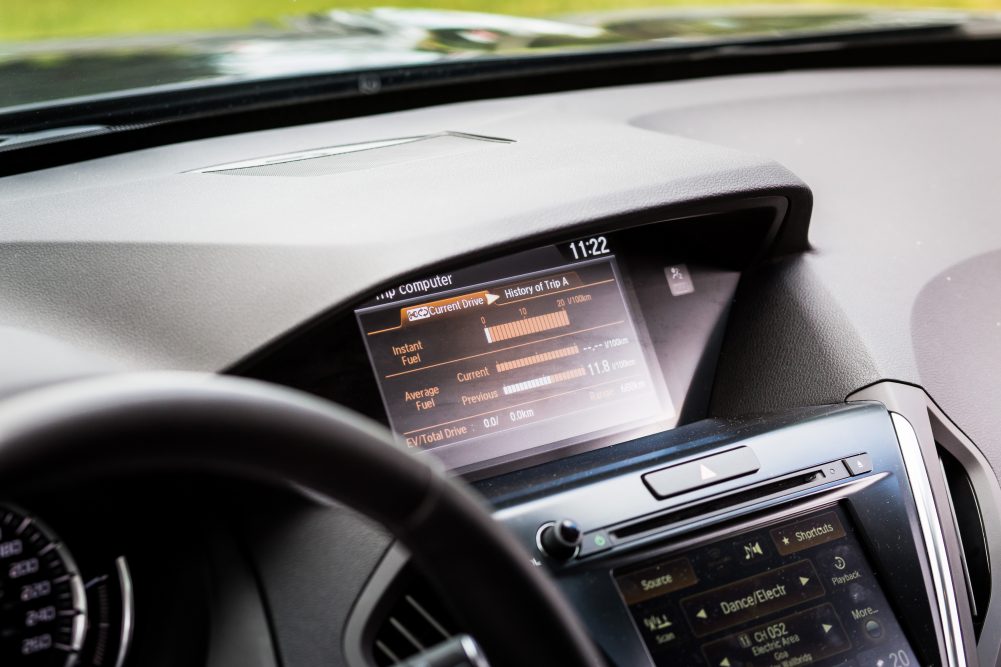 My theory is that the system doesn’t take the moments the electric motors are operating standalone into consideration. Nevertheless, I was expecting all this hybrid wizardry to improve fuel consumption by a long shot. Sadly, it doesn’t. 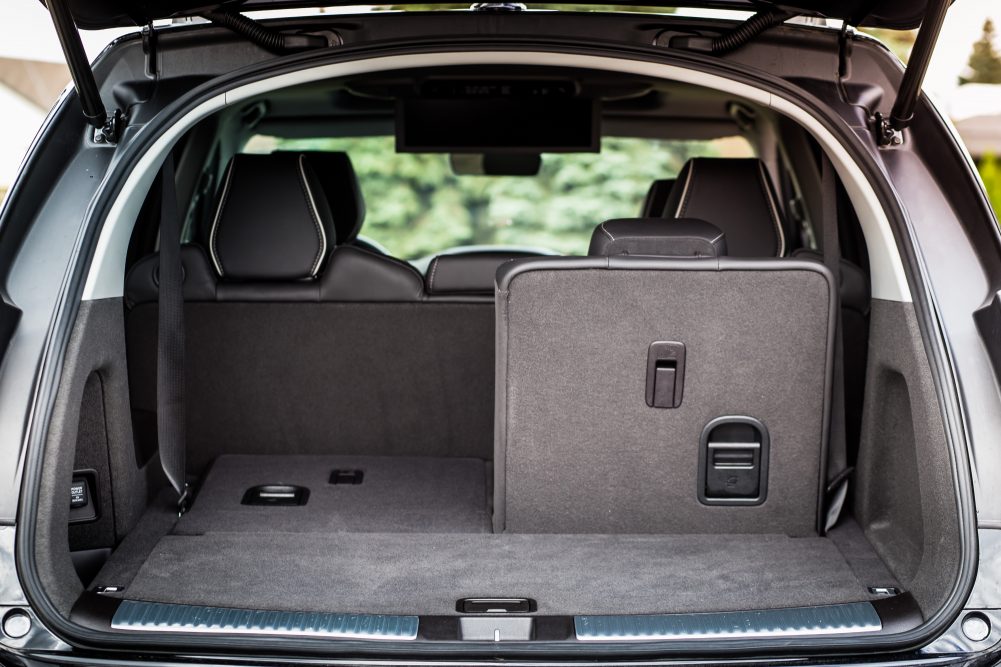 Cargo space remains intact, however, which is the area that matters most in this segment. While somewhat lagging behind competitors such as the Volvo XC90 and Infiniti QX60 at 68 cubic feet when all seats are folded flat, the MDX remains competitive in default cargo space with 15 cubes of space, and 38 cu-ft with only the third bench stowed. That’s identical to an Audi Q7. Third row ingress and egress are easily accomplished, thanks to a wide aperture, and that last bench will comfortably seat full grown adults. 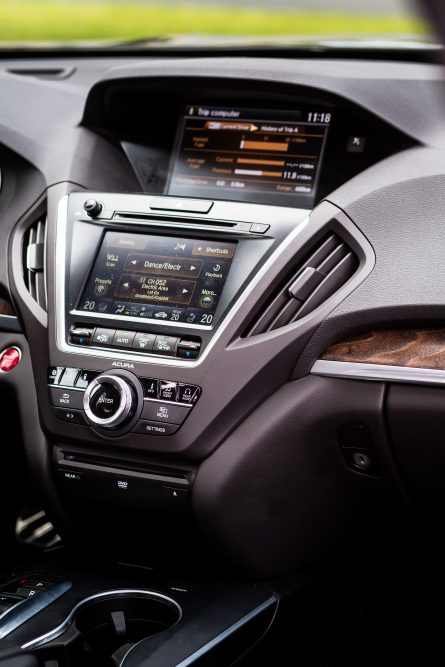 But my one major gripe with the MDX remains its infuriating dual-screen infotainment system that’s hard to get your head around. Not only does it duplicate information from one screen to the next, the system’s interface is dated and some of the menus are downright unintuitive. At least this one gets a volume knob, unlike Honda’s system.

As for pricing, the Sport Hybrid towers the MDX lineup as a “comes as is” and fully equipped model with an MSRP price of $72,191. That’s about four grand more than a fully spec’d MDX Elite. Considering the tech and performance you’re getting, and that its European competitors will still outprice it, the 2017 Acura MDX Sport Hybrid remains a good value. 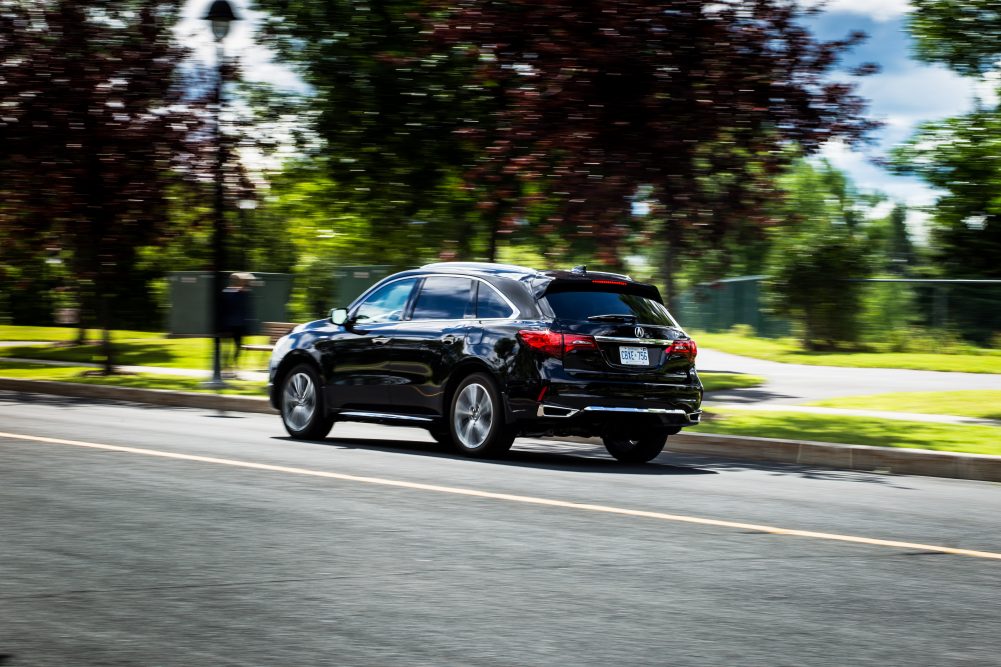 While the Acura MDX Sport Hybrid may not flash its hybrid tech in the same manner as the NSX does, it uses its newfound drivetrain in a way that will benefit consumers in the everyday world, all while adding an extra dose of thrill behind the wheel without costing them an arm and a leg. Sure, the technology could have been more significant at improving fuel economy, but it’s a technology that actually works at making the MDX a better vehicle than it already was, while not hindering too much the endearing qualities that have made it an industry favorite for so long.