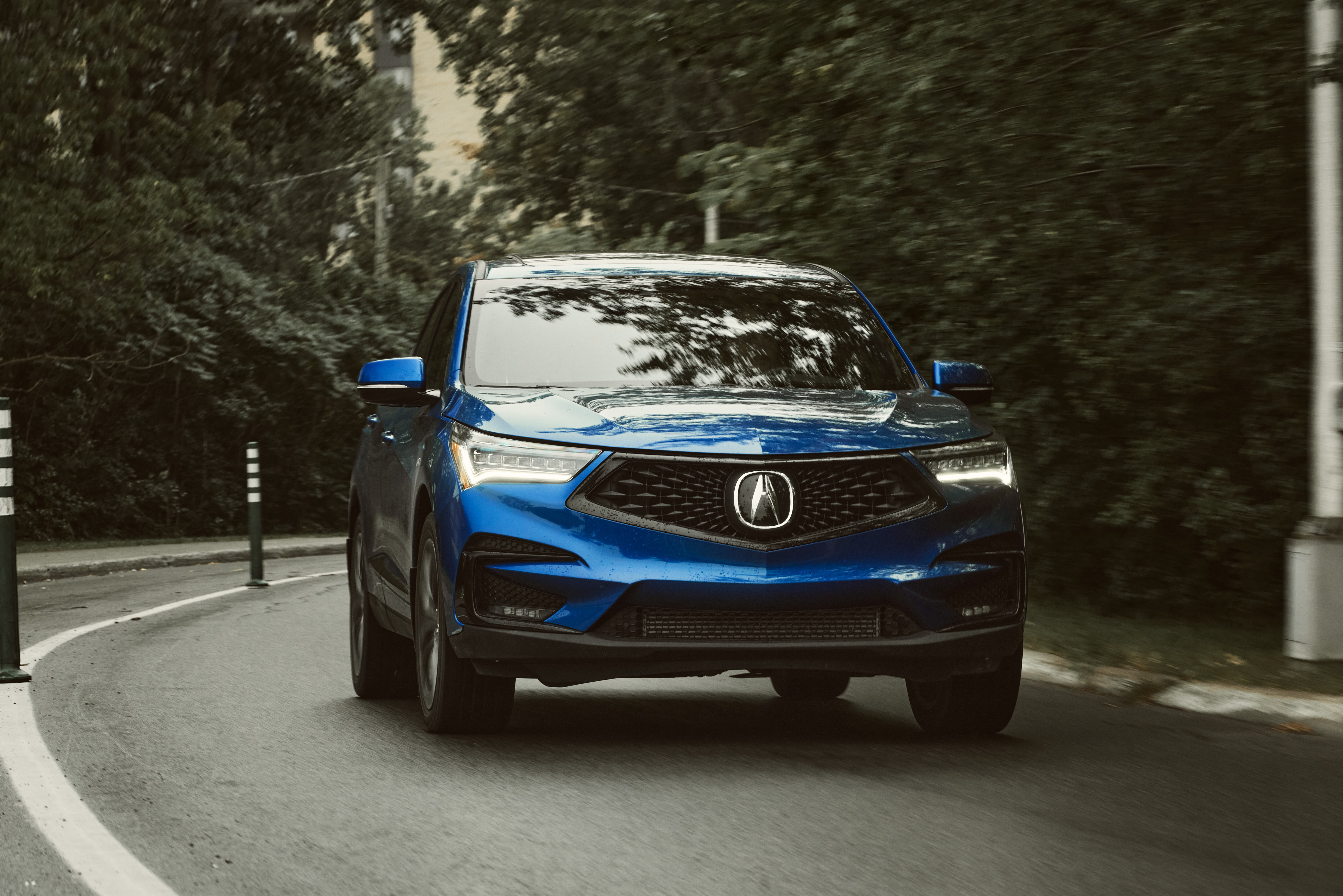 The 2021 Acura RDX is a very good premium compact crossover, proving that Acura masters this segment, but also that the Japanese can still engineer vehicles that are just as good if not better than the Germans. It’s the second time I drive this RDX, and I’m just as impressed with it as the first time I tried one. Perhaps, more importantly, is how much better it is than Acura’s own TLX.

A-Spec All The Acuras 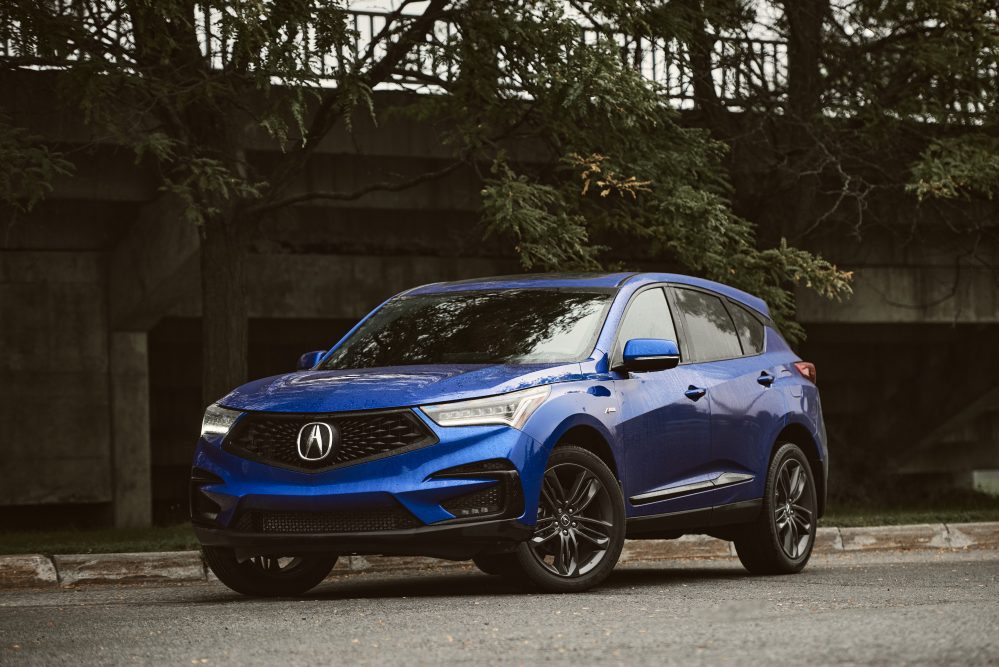 The model you see here is a 2021 Acura RDX A-Spec, which sits at the center of five available packages. While mostly aesthetic and not yet a full on high-performance Type S model (but that’s coming), it’s by far the RDX’s most attractive trim level, mostly because of its bright flashy colors – like this Apex Blue Pearl – but also because of the way it pops thanks to the sportier bumpers, wheels and grille. A-Spec is also the model Acura sells the most of. I mean, Acura, fuck it. Just A-Spec all your cars. 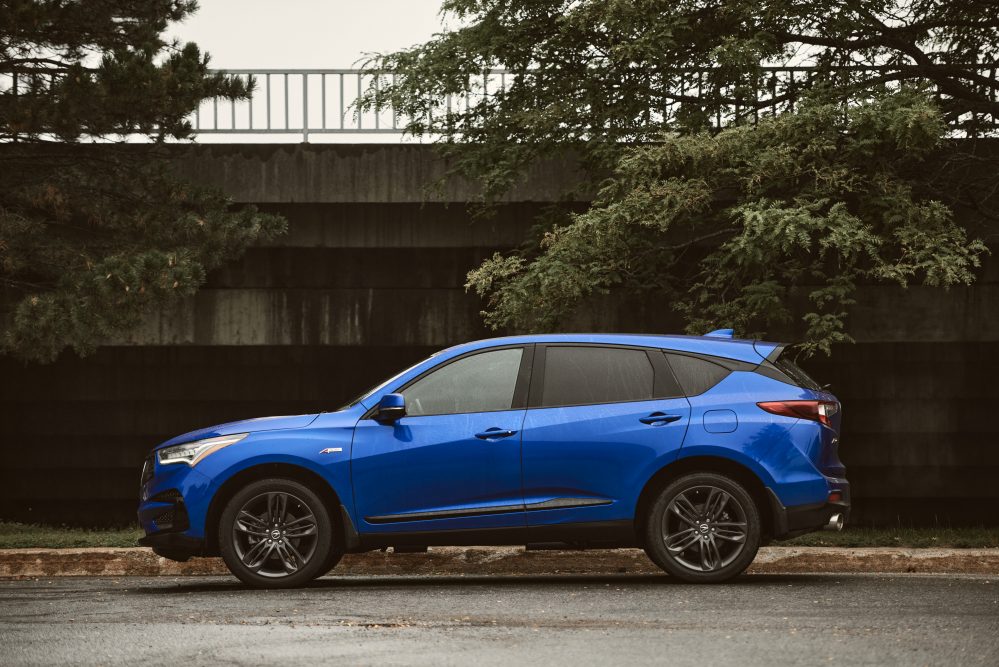 This is the third generation RDX, which hit the market two years ago as a 2019 model. It’s a much more serious affair than the last generation CR-V-based iteration, as it now rides on its own, bespoke architecture. Essentially the same platform as the TLX and the upcoming MDX, it was developed specifically for luxury cars alongside the NSX, utilizing improved stamping techniques and a more intensive use of high strength steel. 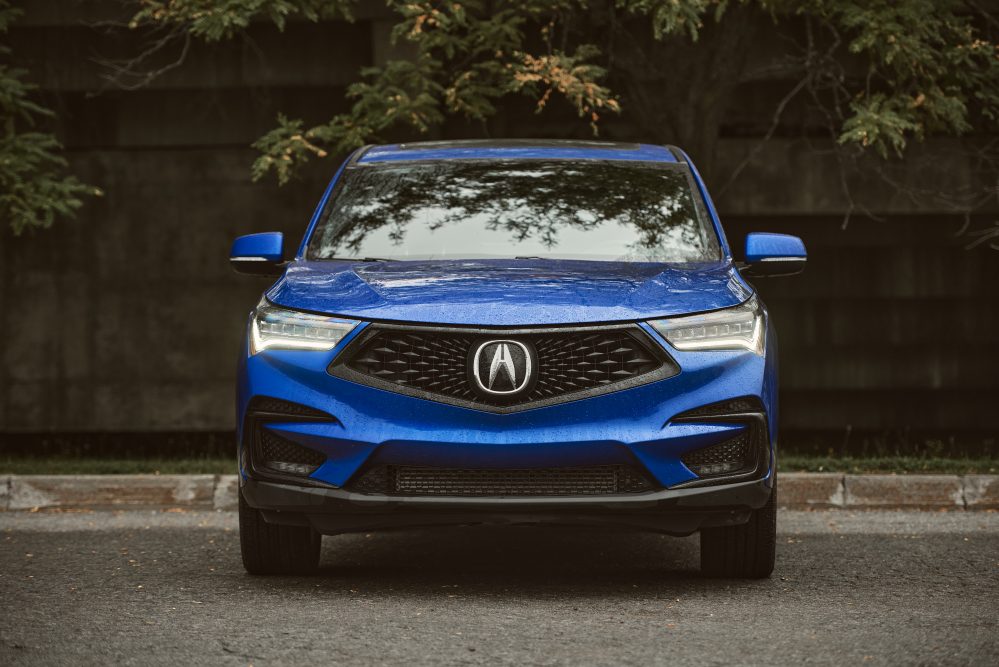 This all allows the RDX to finally be more than a luxed up CR-V, securing its space as a true premium SUV that offers considerably more substance in order to better compete against a segment of excellent machines, things like the BMW X3, Mercedes-Benz GLC and Alfa Romeo Stelvio. I also quite like the way this new RDX looks. 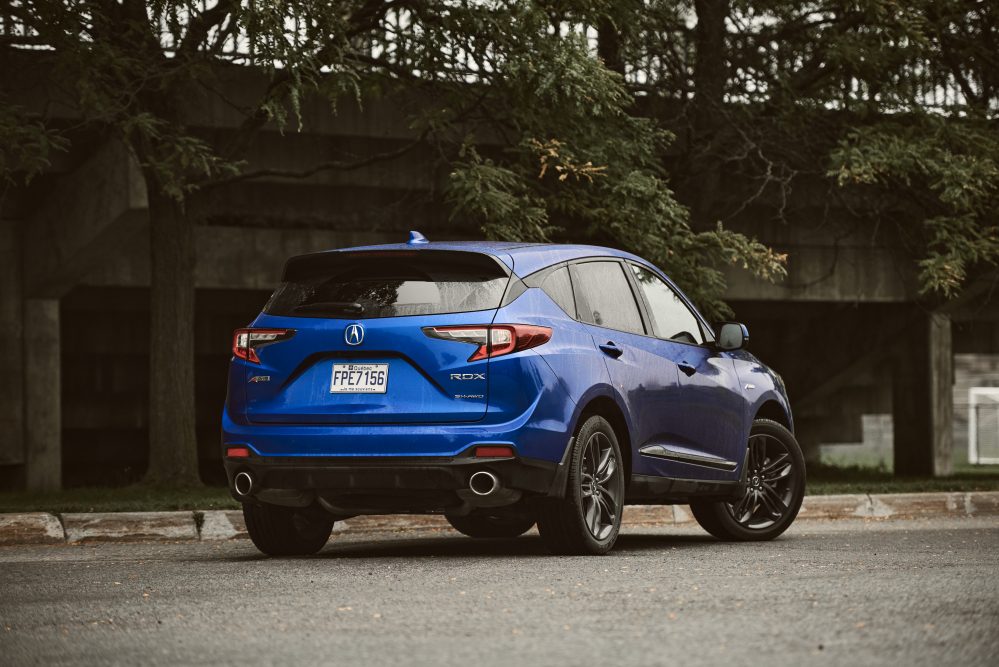 All trim levels are powered by a turbocharged 2.0-liter four-cylinder that’s shared with both the Honda Civic Type R and Honda Accord. It’s mated to Honda’s own ten-speed automatic gearbox, while Acura’s SH-AWD system comes standard. Power is rated at 272 horsepower and 280 lb-ft of torque. 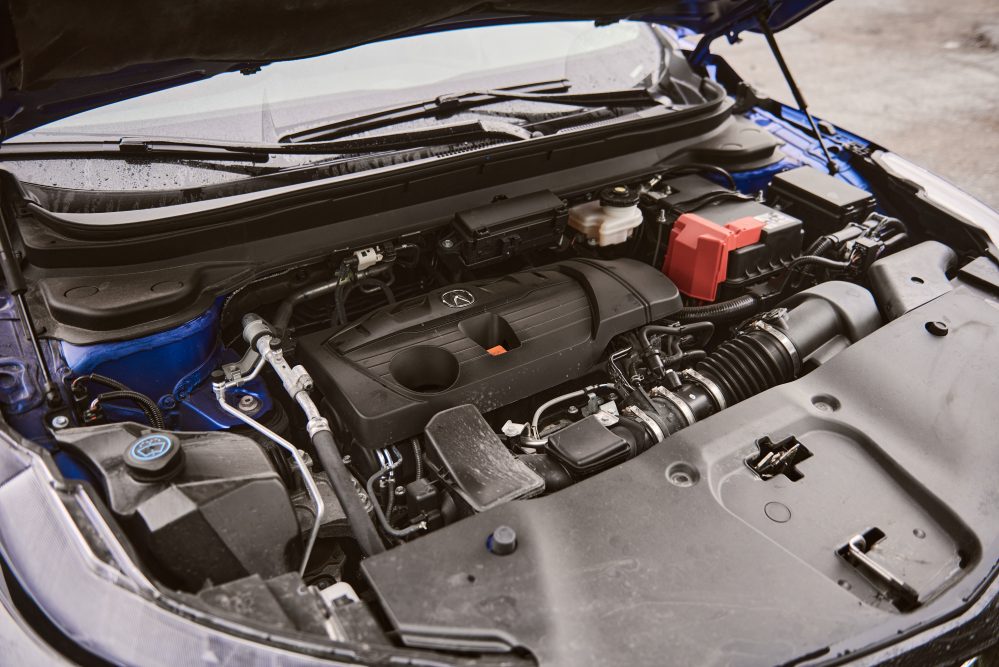 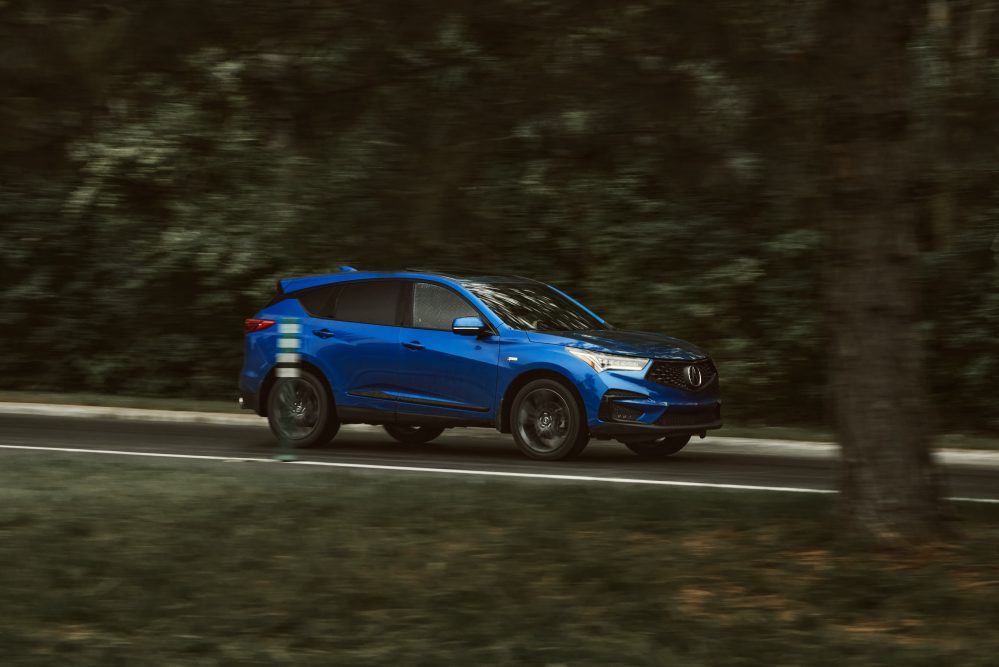 The 2021 Acura RDX’s standout driving feature is its impeccable balance and grace that allows it to carry speed and attack a corner effortlessly. When I say it’s better than the TLX, I mean it simply feels better tuned, and downright better sorted out, perhaps because it rides on a slightly shorter wheelbase than a TLX. 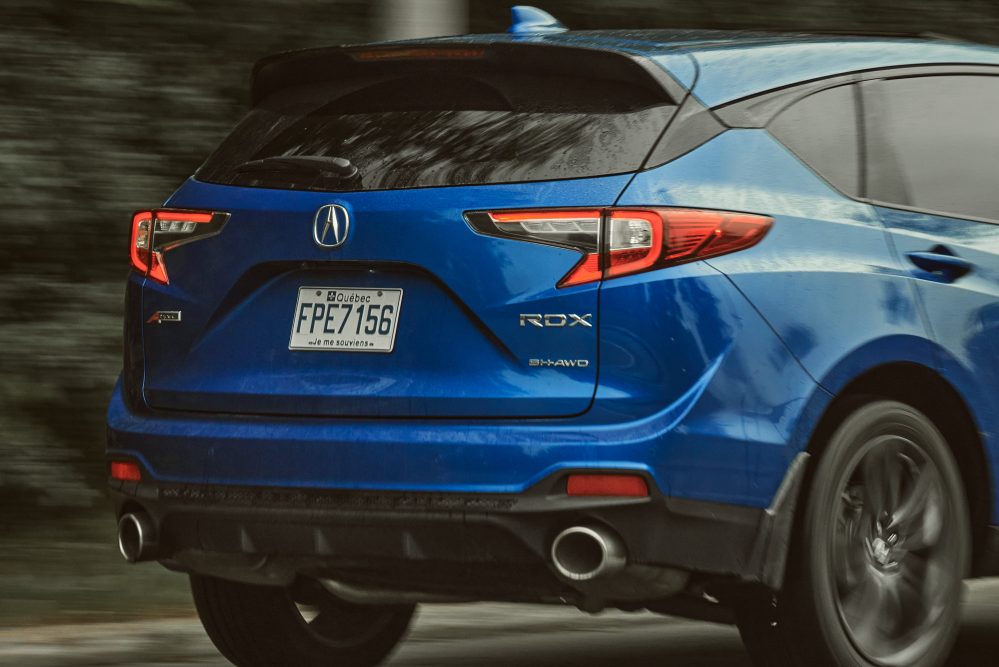 The RDX is athletic, and feels rock solid, capable of taking on an apex just as well as a German alternative, if not better, as the SH-AWD system downright claws onto the tarmac, yielding a surprisingly capable little SUV. Yet, the RDX is also always tame and never too over the top. 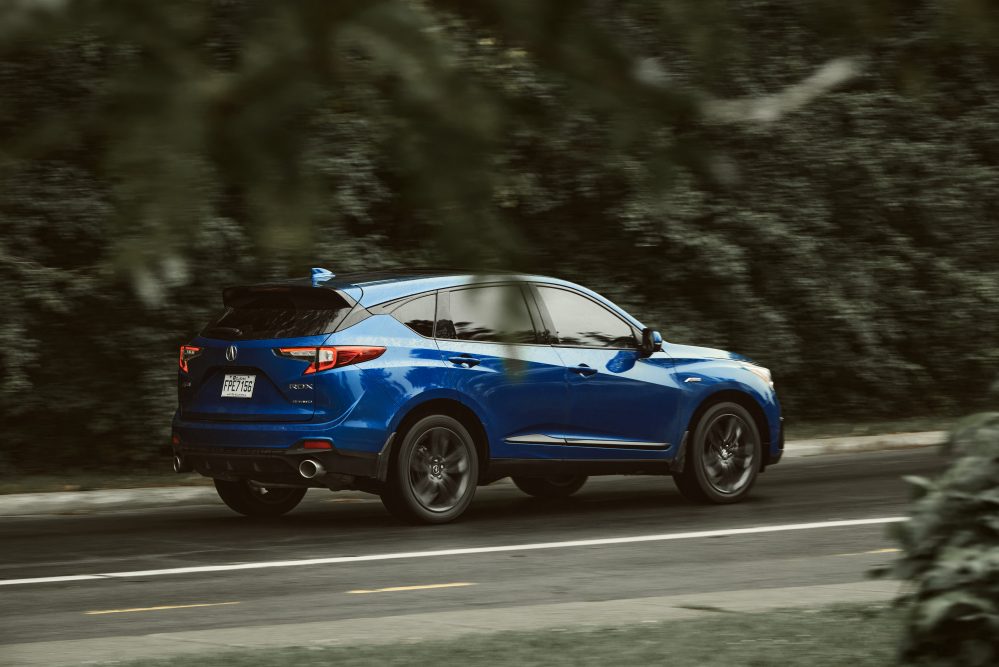 The turbocharged engine remains a peach, though, as it provides ample low-end torque while revving smoothly to redline, never floating or running out of puff. However, the available drive modes – controllable via the Dynamic Mode select knob, which can easily be mistaken for a giant volume knob – don’t actually change much. The engine also never sounds particularly good. Meanwhile, the gearbox works fine, but it doesn’t kick down a gear as quickly as the German opposition. 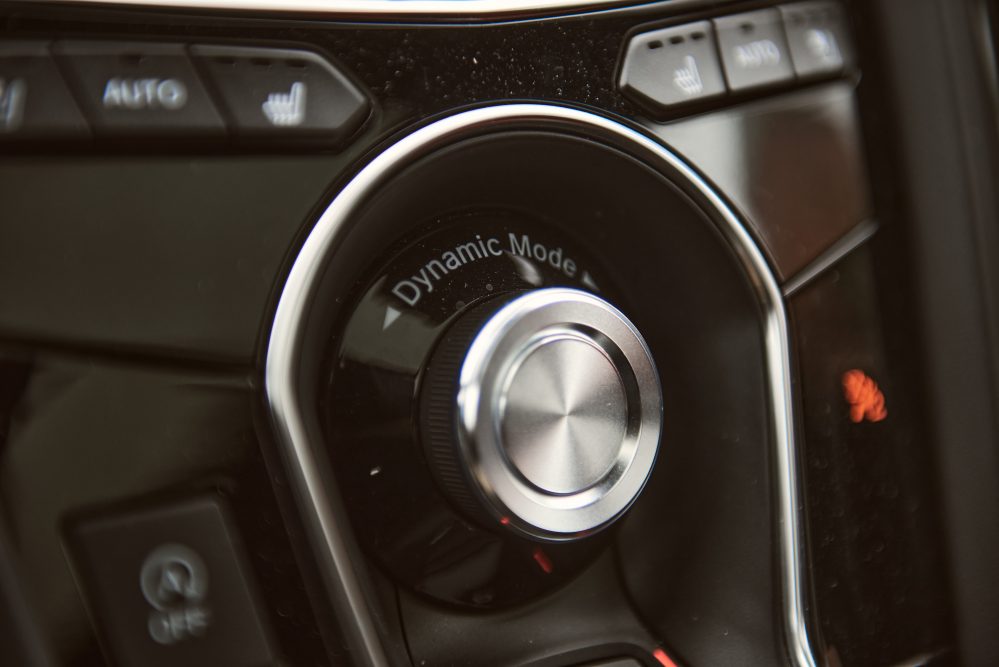 The RDX is quick off its feet, hitting 100 km/h from a standstill in 6.5 seconds, but it’s never lightening fast. The Germans and the Italians will definitely sell you a faster SUV, but very few of them offer this Acura’s graceful balance and impeccable build quality. 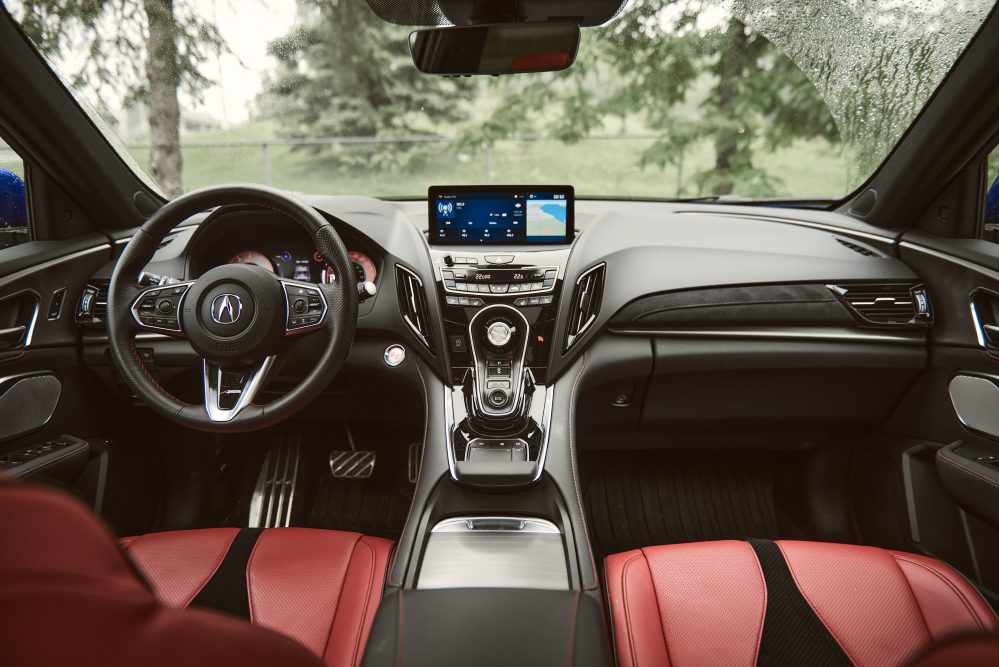 As a matte of fact, this current-generation RDX makes big strides in interior quality, harvesting a much more modern design than its predecessor, all while incorporating rich materials and attractive color combinations. That said, there’s a lot going on here, with suede like surfaces, leather and soft plastics contrasting one another with a lack of logic. But it looks good, while the seats feel absolutely amazing. 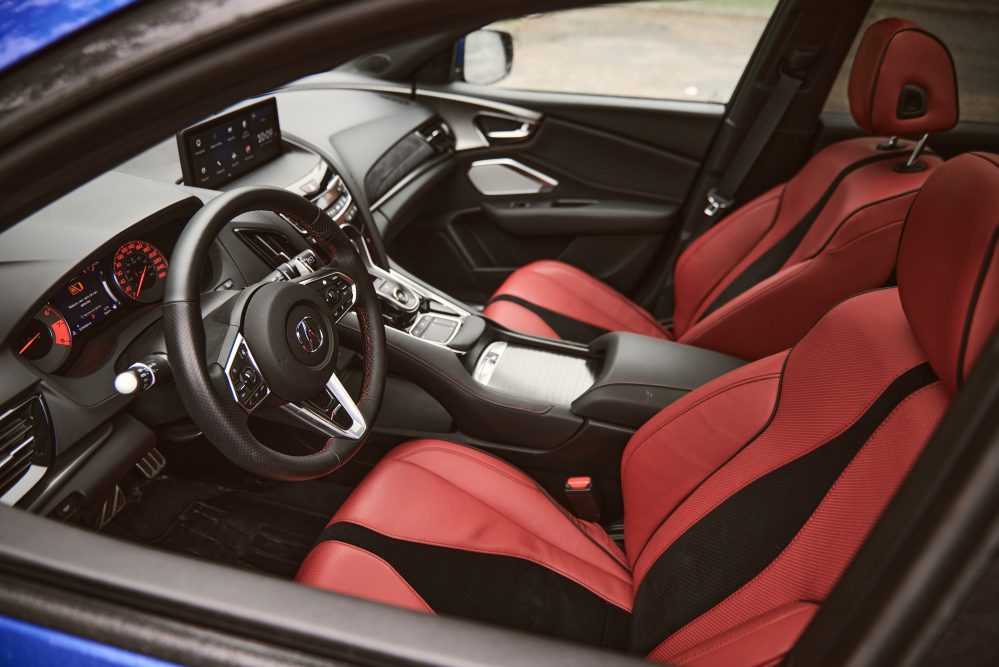 Where the 2021 Acura RDX sadly fails, is in cabin ergonomics, notably in its furiously unintuitive infotainment interface. There are two reasons why it’s a missed opportunity. One: the touch pad that was put there to operate it. And because the screen doesn’t incorporate touch controls, this means the pad is your only way out. 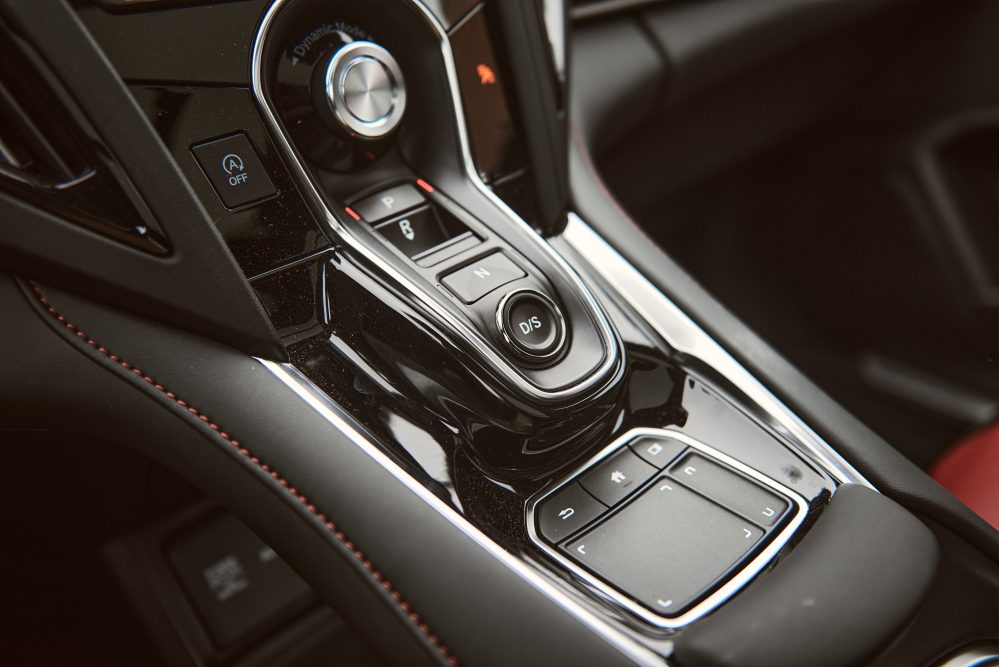 To Acura’s defense, once you understand the logic behind it (the location where your finger hits the pad is mirrored on the screen), it becomes somewhat manageable. But then the interface that’s connected to it, while much improved from its predecessor, is still a UX mess. 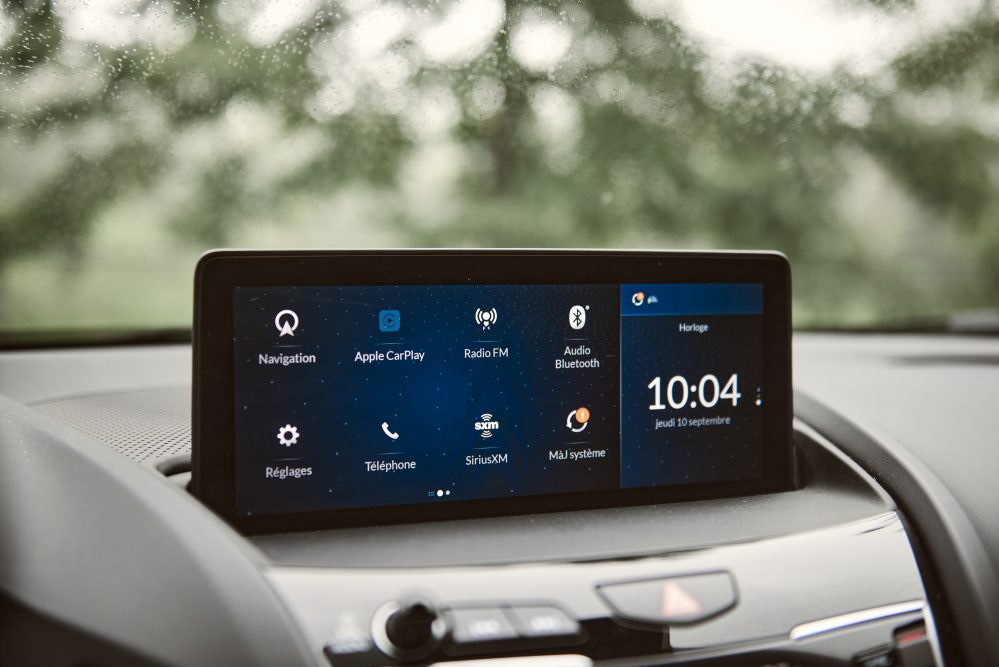 The graphics look good and the 10.2-inch screen’s resolution is top notch, but the menus are thick, with complicated layers before attaining simple commands. Menus have dead ends and sometimes don’t lead to what their title promise to be. The good news is this system connects quickly to your Android Auto or Apple CarPlay, so I recommend you use those for smarter ergonomics. 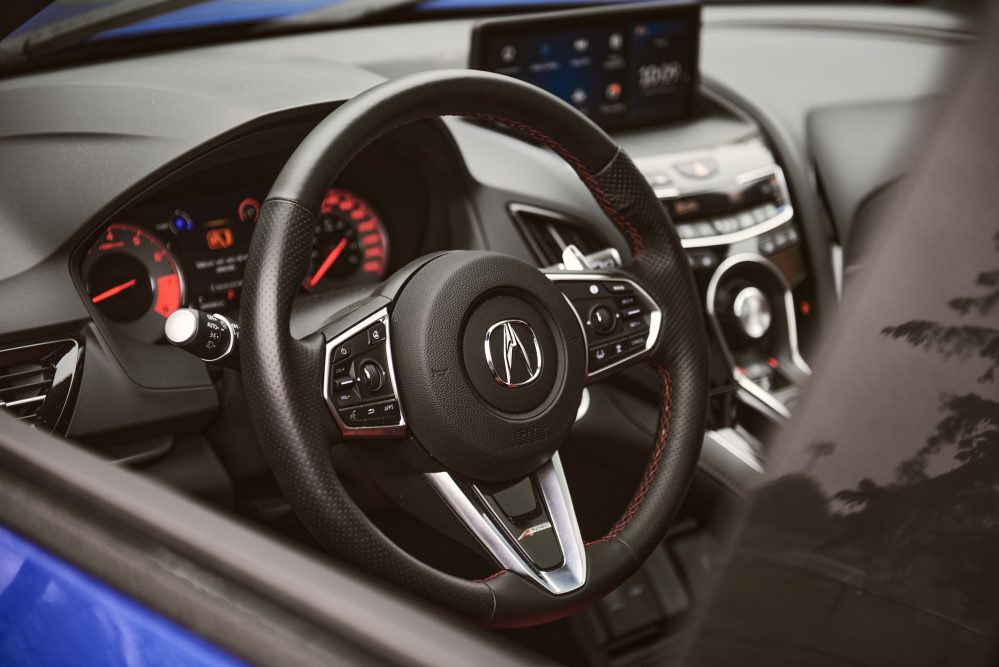 The RDX continues to play the David vs Goliath card by being more affordable than its European rivals, but also by killing them where it hurts: cargo space. Lower the rear seats flat, and the RDX will engulf up to 1,667 liters of your junk, which pulverizes both an Audi Q5 (1,503 liters) and Mercedes GLC (1,149 liters), while still staying ahead of both an X3 and a Stelvio (1,600 liters). 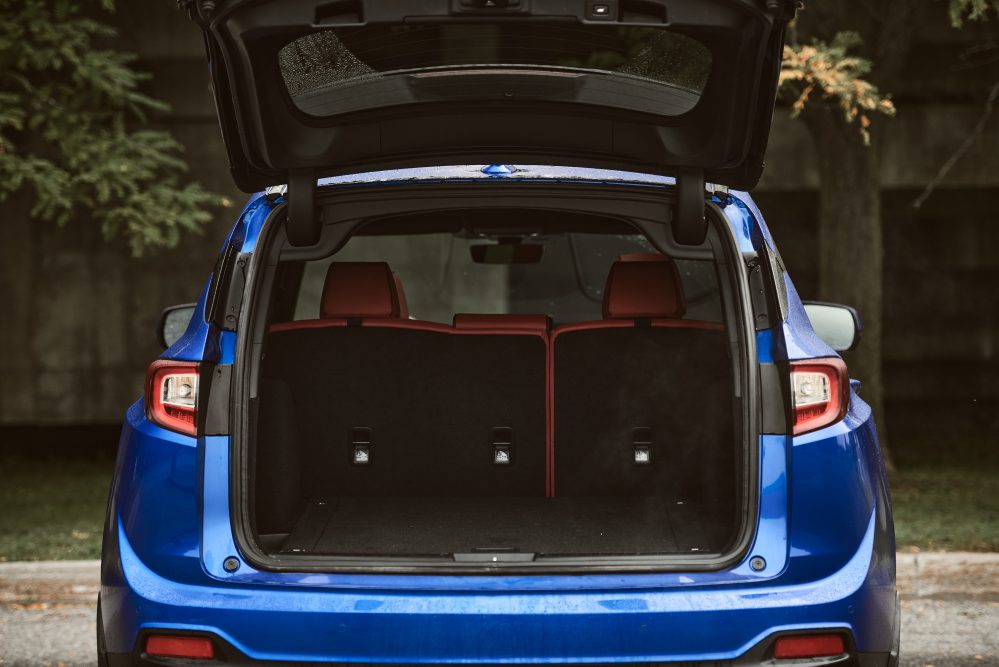 The 2021 Acura RDX really is the best vehicle Acura currently sells. Ironically feeling more at home on a winding road than Acura’s own TLX sport sedan, the RDX offers consumers a lot of substance for the price, class-leading cargo space as well as the expected mechanical brilliance and road composure of Honda vehicles. 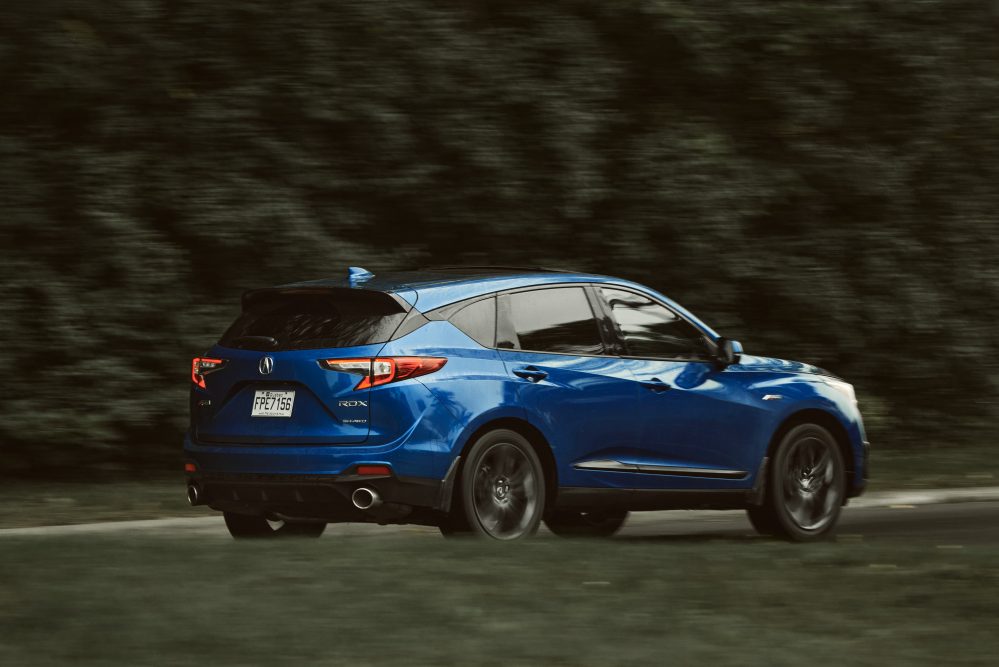 Honestly, except for that stupid track pad, which could throw off some potential buyers, this RDX has everything going for it, allowing it to punch hard while remaining the underdog of a heavily crowded segment. With 75,000 sold in the US and Canada alone last year – a record in RDX history -, it’s fair to say Acura has cooked up a nice little commercial hit with this one.