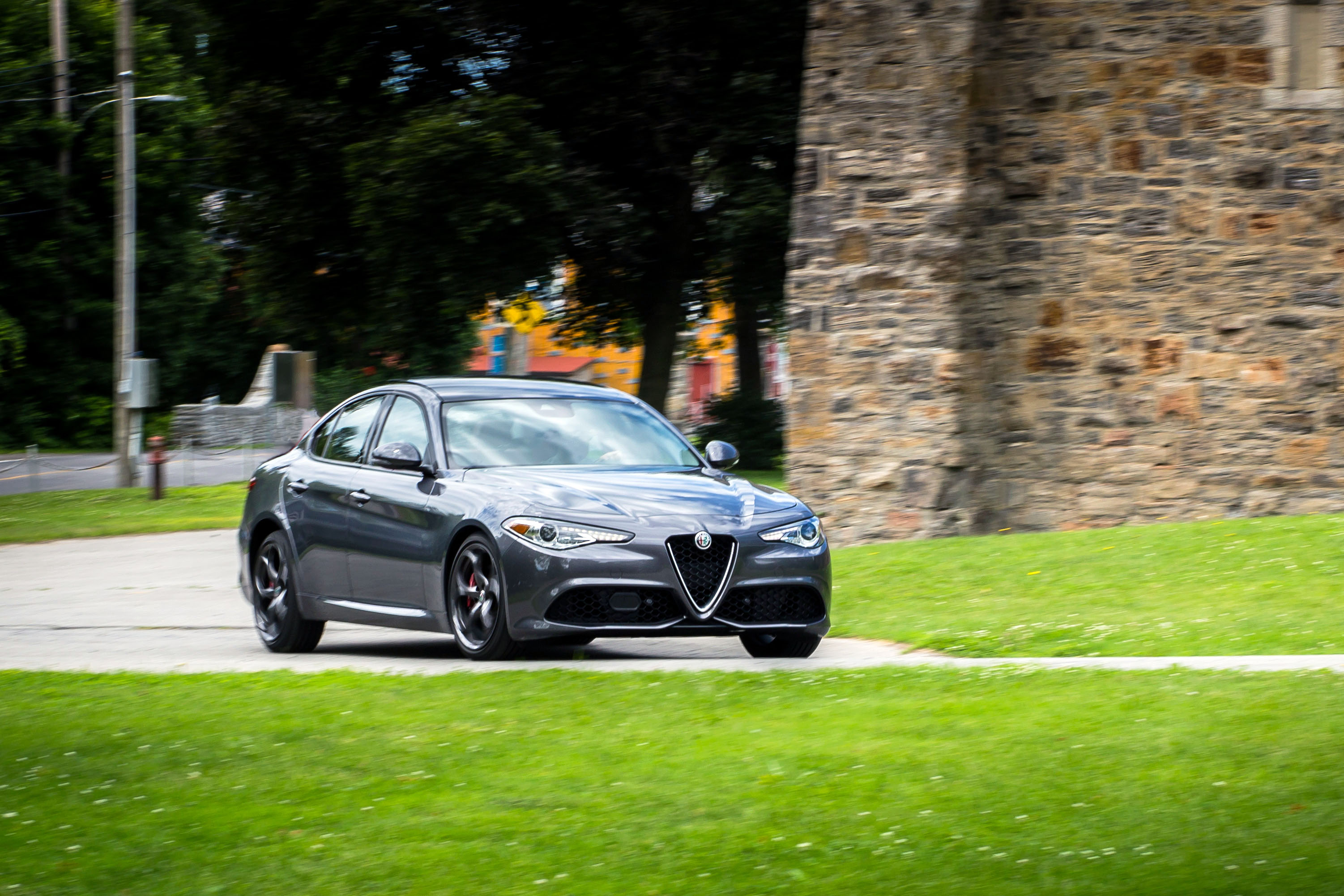 Obviously, if you’re into cars, you know about the Alfa Romeo Giulia. It’s the Italian sports sedan that’s been sent from the automotive gods to kick the BMW 3-series’ ass. After almost two years of Internet tease, in the form of YouTube videos and media stock photos, we North Americans can finally touch, taste, and smell all that is Giulia. This is the most highly anticipated automotive release of the year.

Of course, all the hype is around the Quadrifoglio, the top dog Alfa, the M3 fighter with its 505-horsepower twin-turbo V6. And to answer your question: yes, I’m going to review that one later, but only once all the automotive journalists here in Québec (that includes me too) have finished gnawing at the bone like a pack of hyenas desperately starving for their daily fix. Anyway, the one you see here, the Sport, that’s the Giulia people will actually buy. Which is why I was a lot more intrigued at how well (or not) it would do. 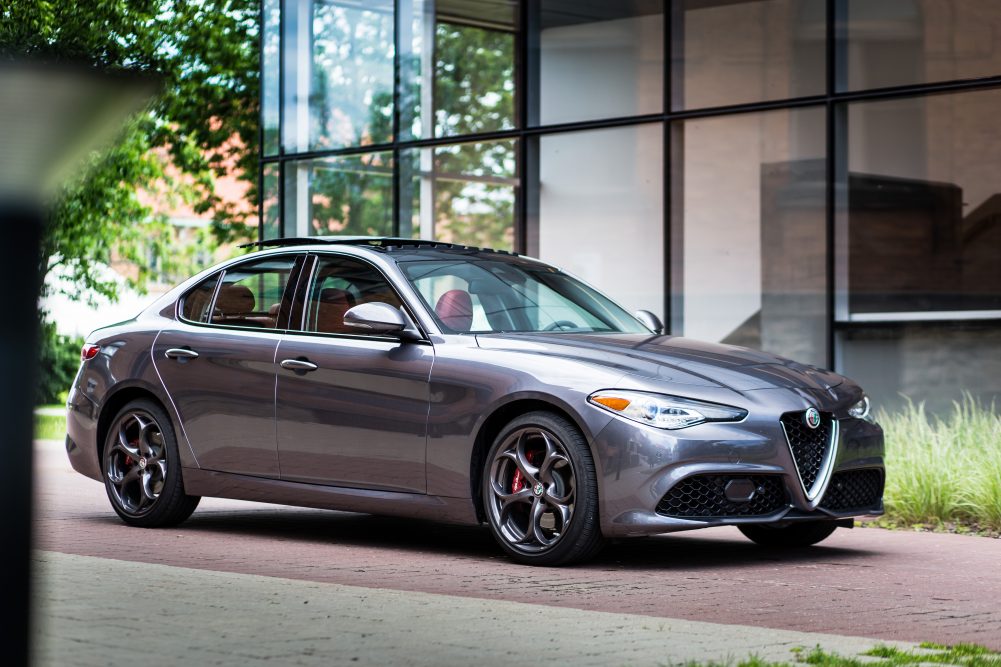 For the sake of this review, I’m going to do my best to avoid dishing out the traditional auto journo clichés about how the Giulia feels Italian and oozes with emotion and passion.  There’s no denying that this is an attractive car though, one whose crosshairs are aimed directly at, yes, the BMW 3 Series, but also the Audi A4, and Mercedes-Benz C class. If, like me, you’re fed up with seeing such cars on the road, then you might appreciate the originality of the Giulia Sport. What a breath of fresh air in this segment. 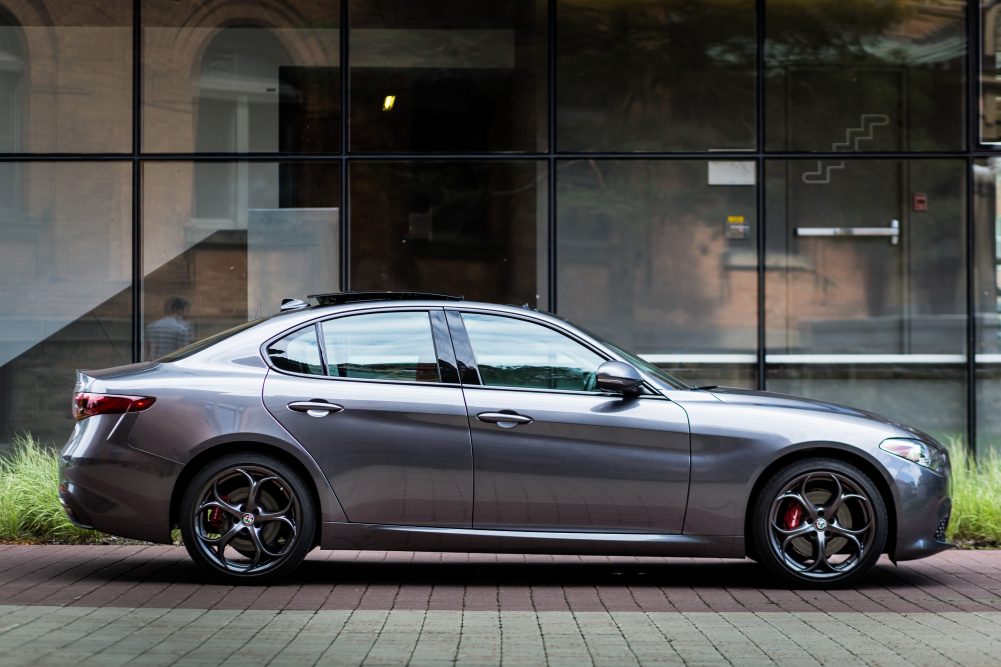 It definitely looks the part, and, well, very Italian – god dammit – with its curvaceous lines, tightly packaged proportions, short front and rear overhangs, squinting headlights and classic Alfa Romeo front grille. There’s a bit more flare in this design than what we’re accustomed to seeing in the segment. The Giulia looks like it’s ready to prance, all the time, that’s thanks to a low front and a slightly raised rear end. It’s a good looking machine. 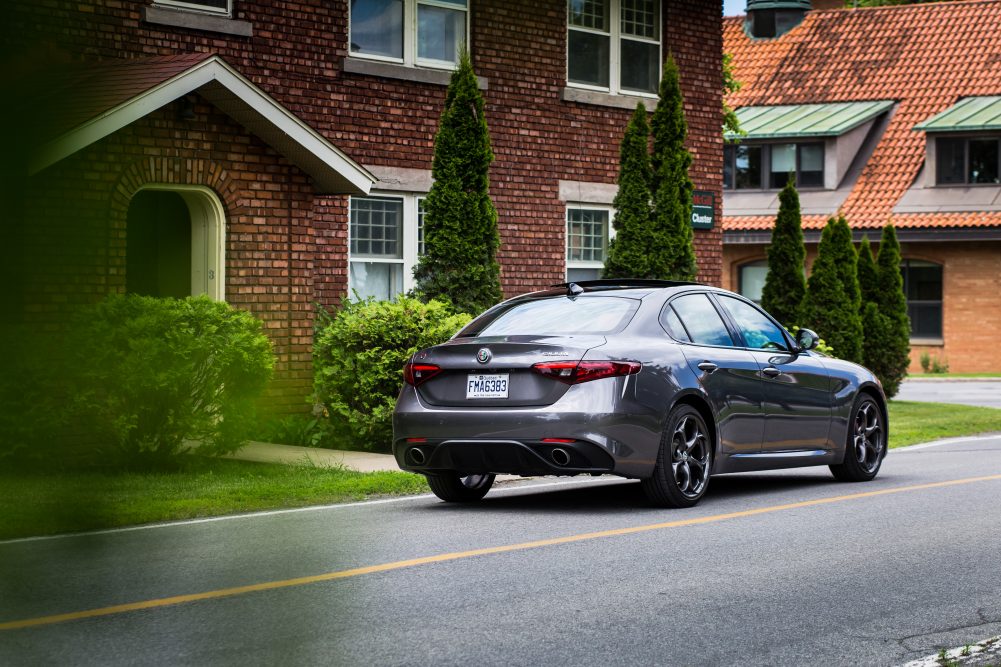 And in Sport trim, like the one you see here, the car inherits the Quadrifoglio’s larger wheels, with upgraded brake kit and rear valance treatment. You can even opt for a limited-slip differential and three-mode adaptive dampers for your baby Giulia.

See the Sport as an M-package on a conventional BMW 3-series. It’s mostly aesthetic, but it sure works at fooling people you’re driving the real deal. 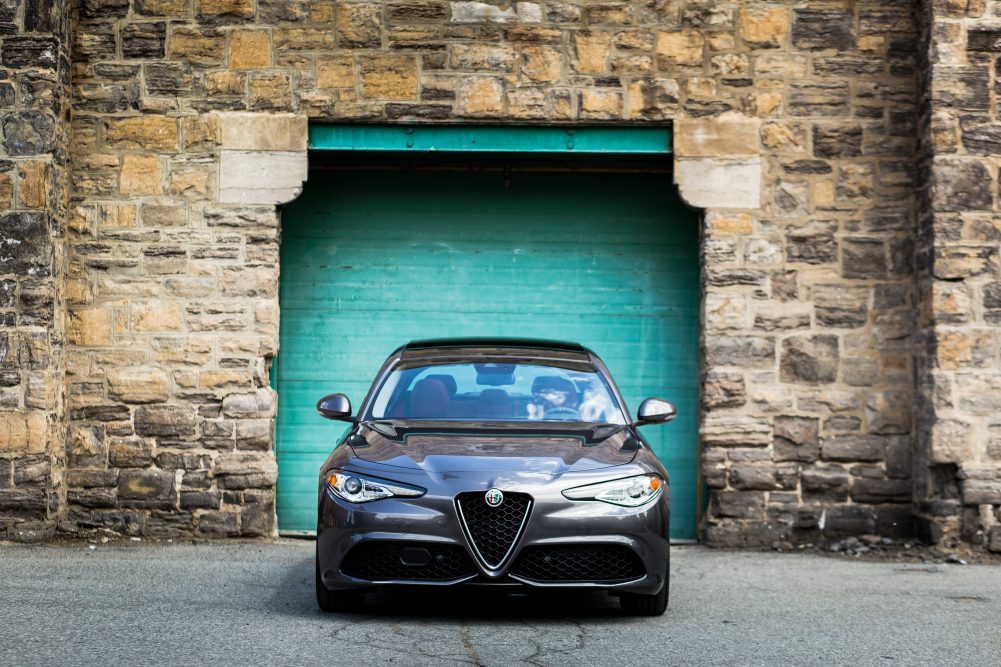 That Sport package certainly attracted a lot of attention. Actually, a base Giulia alone would probably be enough to gather crowds. Everywhere I went with it, I got positive comments. People pointed, thumbed me up, some came straight up to me to tell me they loved the car, asking for pictures. My shooter Myle and I even met a diehard Alfa fan, who not only owns an original Giulia Sprint, but invited us down to his boat house for coffee and a chance to shoot the car directly on his lot.

So much cult status behind a brand that’s been nonexistent on these roads for over thirty years.

Not A Parts Bin Special 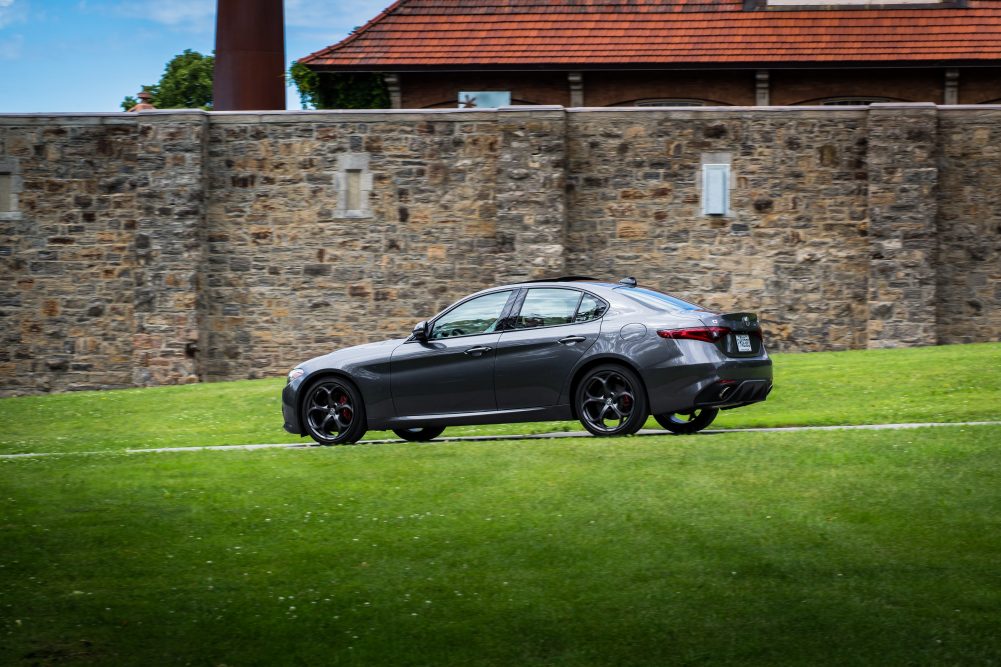 I must say, there’s something odd about asking for borrowing an Italian sports sedan from the Fiat Chrysler (FCA) headquarters. Like many, I too was worried the ho-hum versions of the Giulia would feel sorta like a remix of Chrysler 200 and Dodge Charger.

Alfa Romeo wants everyone to know that this is a real Alfa. If there are elements that are shared with a Pacifica or a Challenger, they’re well hidden. Only a few chimes and a massive key fob reveal a tiny bit of corporate sharing, but the Giulia, in all its forms, is all new, and all Alfa. 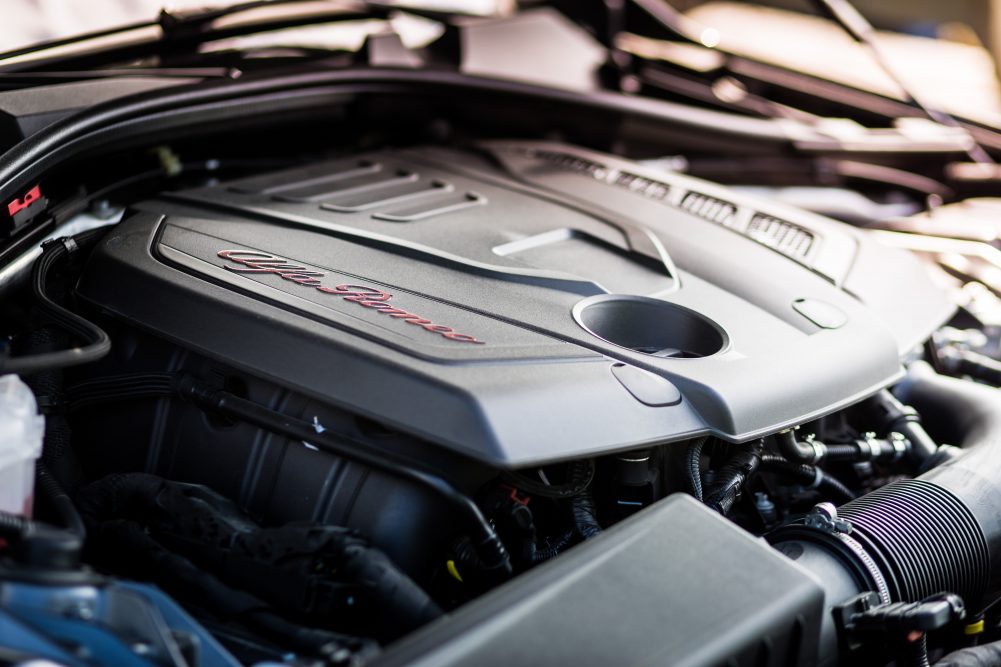 The Sport is somewhat unchanged mechanically from the base Giulia. Basically, all versions except the Quadrifoglio come with a 2.0-liter turbo four. It’s good for 280 horsepower, and 306 lb-ft of torque, says Alfa, with power going to the rear, or all four wheels. That one, the all-wheel-drive version, is dubbed the Q4, and it’s the one I had. 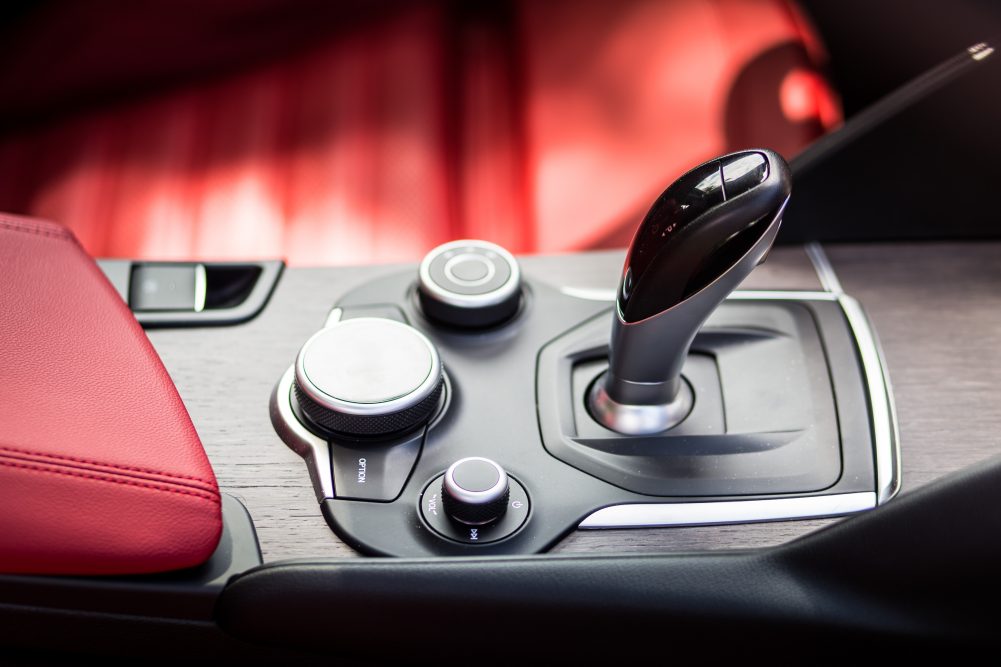 Only one transmission is available throughout the lineup, it’s an eight-speed automatic. Alfa does sell a manual Giulia in Europe. We don’t get it – large-ass bummer. A manual gearbox would make so much sense in this car, what gives Alfa? 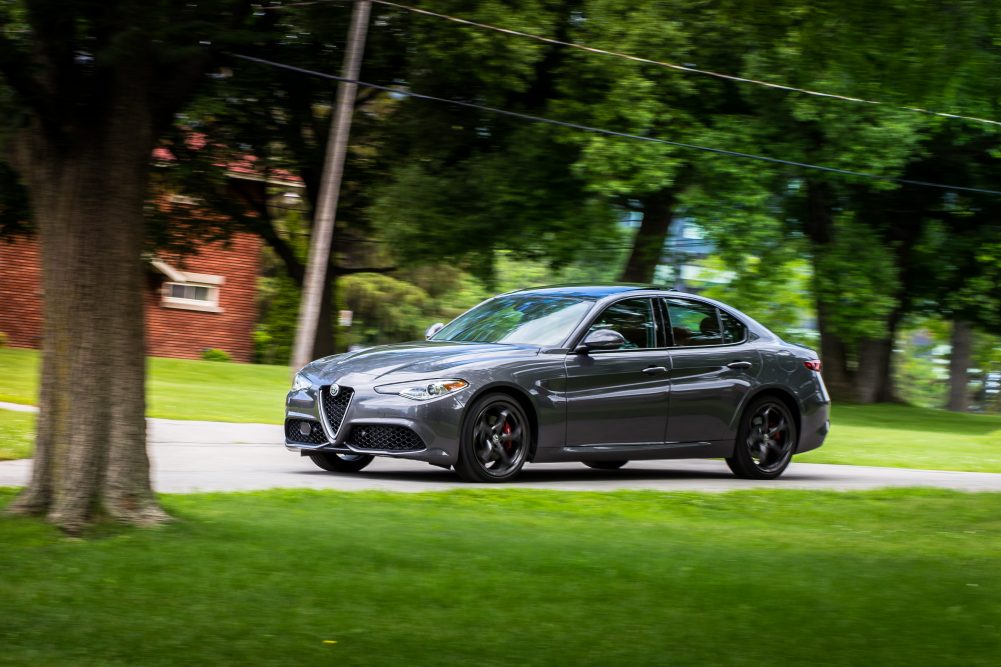 To Alfa Romeo’s credit, that automatic isn’t all that bad, as in: it’s excellent. It shifts fast, does what you want when you need it and disappears in the background, allowing you to focus on the drive. It also comes with oh-so-glorious and properly large column – mounted paddle shifters. But the largest merit goes to the Giulia’s steering. What a clever piece of engineering. I must say, it’s been a while since I put hands on a wheel so small and so quick. The Giulia isn’t only fun to drive, it connects directly to your central nervous system and makes sure you’re dopamine levels are constantly on point. 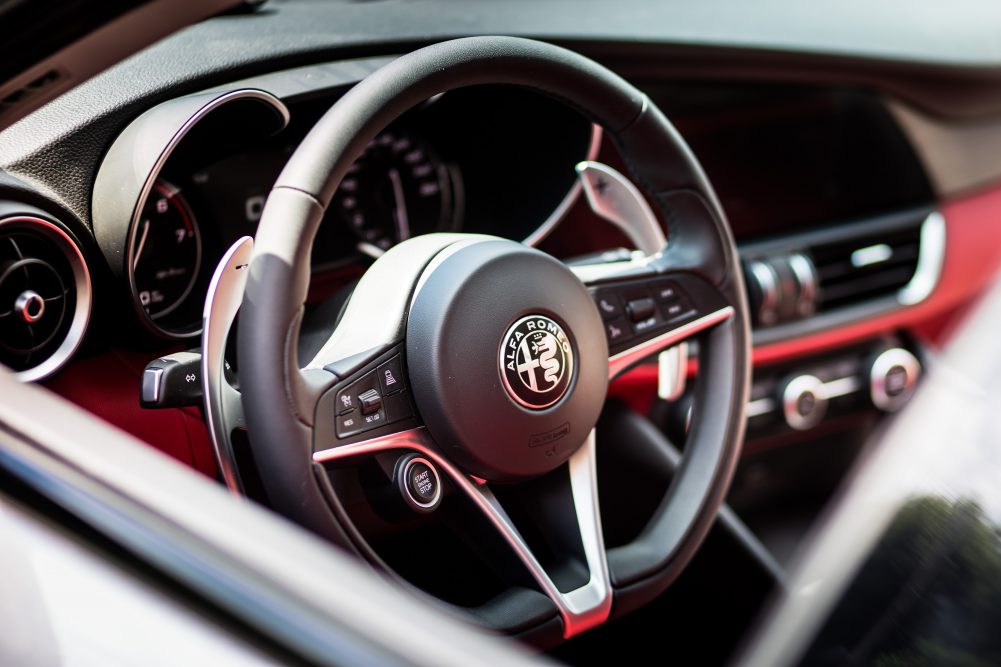 The end result of such a precise steering means the Giulia turns in with near Mini Cooper eagerness. But its chassis is also impeccably dialed in so the car glides gracefully over uneven surfaces all while destroying your lunch in a corner.

I was expecting a choppier ride than this, but actually, no. It’s smooth. There’s compliance in the Giulia’s suspension even a Mercedes-Benz C class has trouble reproducing. I’d know, I had a C300 4Matic lying around as well, but even when pitted against one of its main German rivals, the Alfa kept feeling damn good. 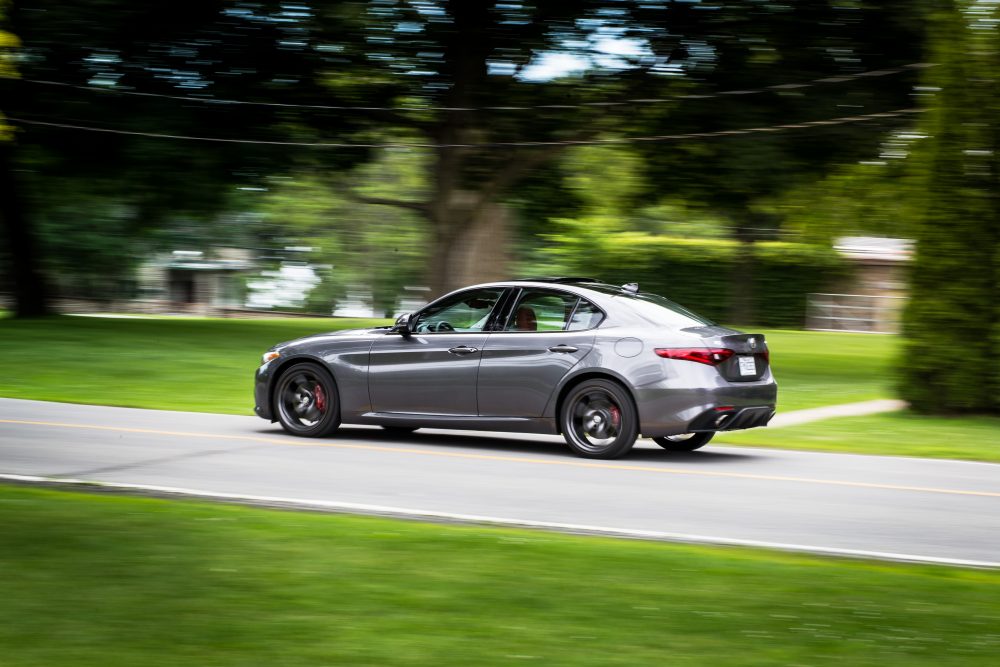 That turbo engine delivers ample midrange might, but it’s no signing chorus like the Quadrifoglio’s V6. This is a quiet, subtle little motor which requires keeping an eye on the tachometer if you don’t want to hit the rev limiter. Because you’ll never hear it bounce off. 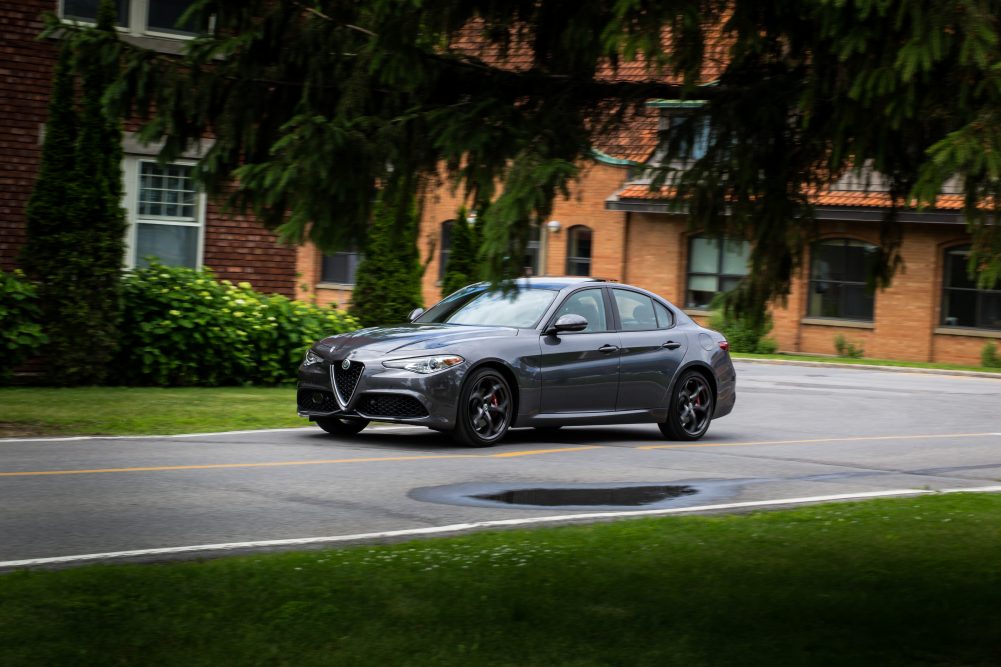 While the Giulia sends ample power to the ground, I mean, even in all-wheel-drive form, it’ll launch to 100 km/h in a brisk 5.1 seconds, the issue is that you never hear the car making a sound. That’s a serious disappointment in an Italian machine. Even the Germans have a bit of fun with sound symposers. But this baby Giulia, it’s mute as shit. 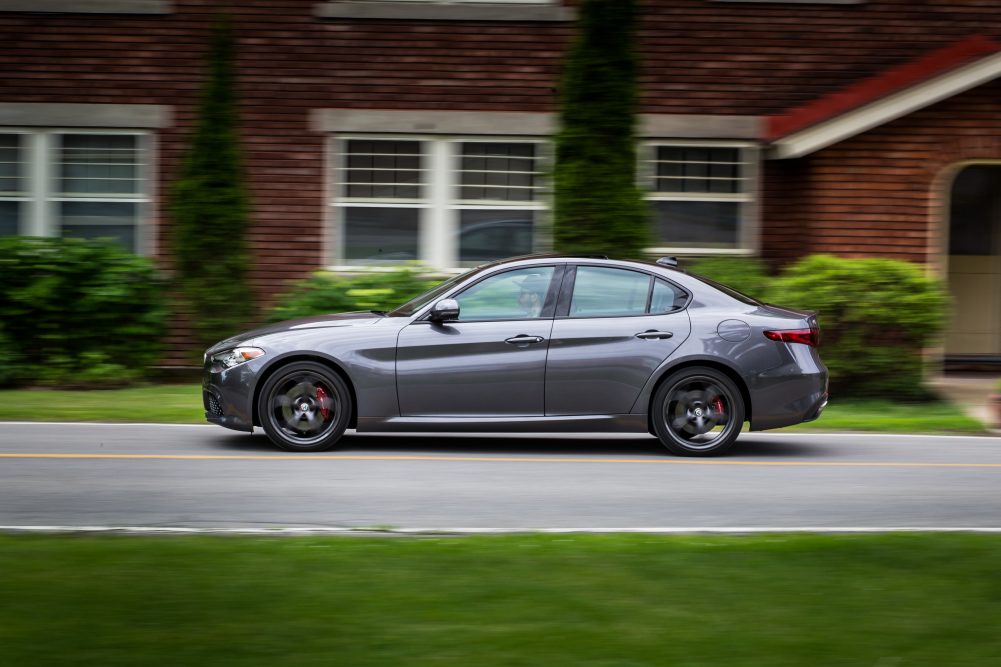 The Giulia gets its own, bespoke infotainment system, which not only looks absolutely gorgeous with its large screen elegantly integrated into the dashboard’s clean lines, but is also relatively simple and quick to respond. I’m detecting a bit of UConnect’s soul behind this interface. Wherever it comes from, it works. 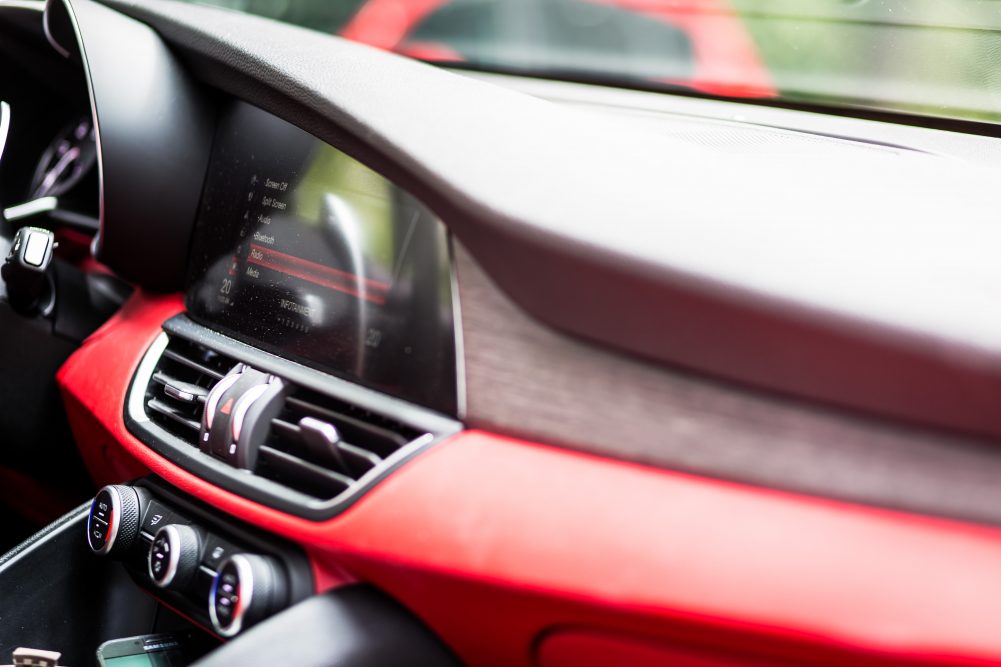 Like in the 4C Spyder, the Giulia gets the brand’s ubiquitous DNA switch, which significantly alters the car’s throttle, transmission shift points, suspension and steering response. Of course, this being an Italian car, there are no explanations as to what each mode actually does. You kind of have to guess your way through it by way of colors and letters. D seems to make the car fast. And it’s red. Is it Sport mode? I guess. 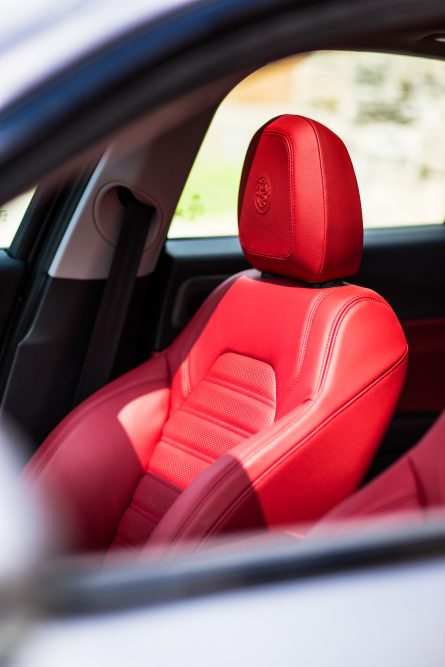 Other typically Italian quirks include a shift lever that annoyingly shifts itself into neutral if you happen to rest your hand on it too hard. Some of the car’s panel gaps are worryingly wide for this segment, and the rear seat is cramped compared to an Audi A4 or BMW 3-Series. 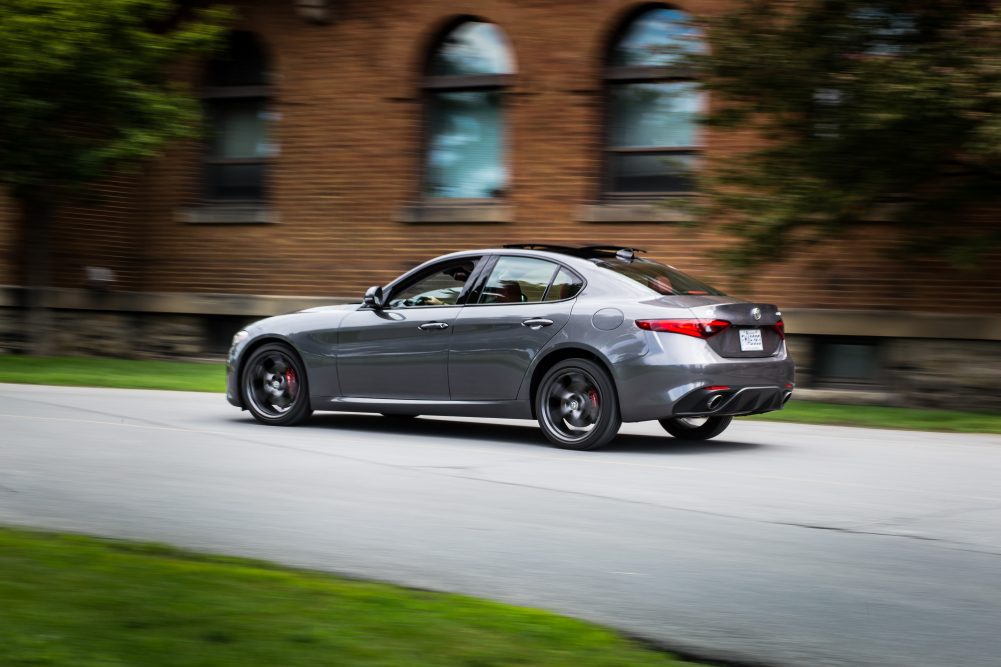 But overall, the Giulia’s interior fit and finish is impeccable, the dashboard is elegantly adorned with high quality materials while coming through as a fresh modern design, and those front seats, especially when painted red, look and feel absolutely phenomenal. There isn’t much about the Giulia I could fault; because at the end of the day, it’s a beautifully designed and highly emotional product that genuinely feels of good quality. 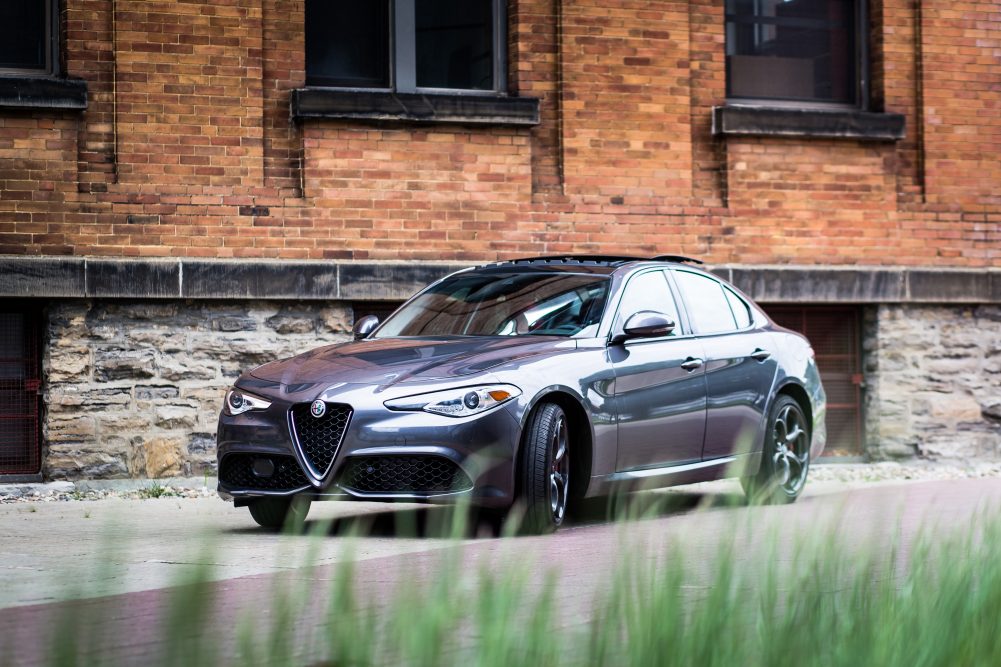 Pricing for a 2017 Alfa Romeo Giulia starts at $48,995. A Sport, with all-wheel-drive, dressed up in this color combo and the sick wheels and brakes, sells for $52,690. Sure, that’s uncomfortably close to a well-equipped Audi A4, a car with a much more established sport sedan reputation. But no Audi feels as desirable as a Giulia, and an A4 is certainly not as unique as this. 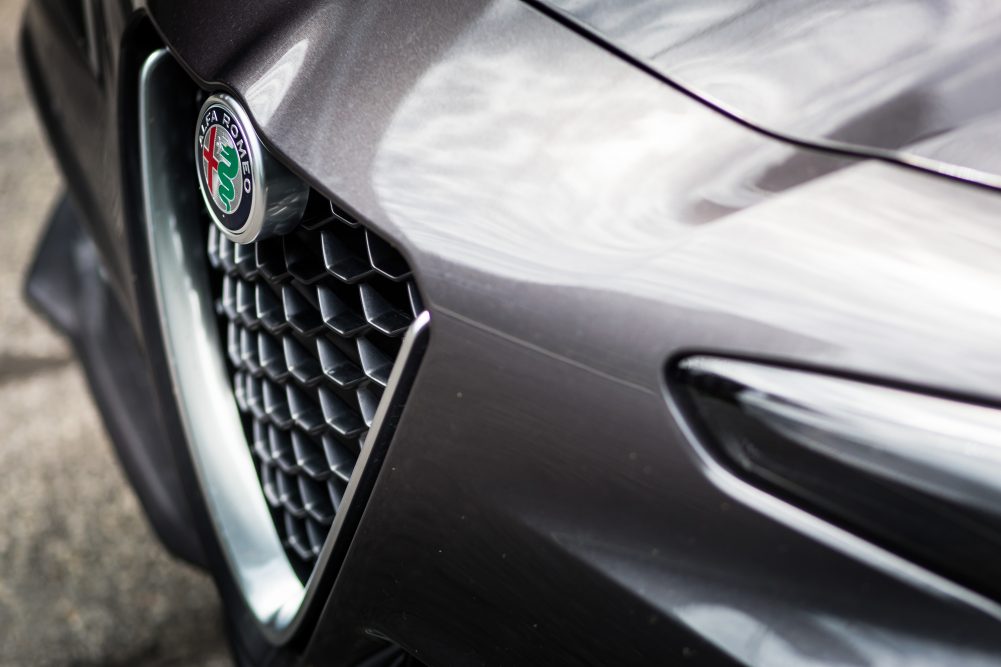 I came out of my time spent with the Giulia realizing it isn’t necessarily as stereotypically Italian as we all expect it to be. It rather comes through as a new and unique take at the compact sports sedan. The 2017 Alfa Romeo Giulia Sport stands out of the crowd not by trying to be German, but by attempting to be the best version of what an Italian sports sedan should be. And for once, it doesn’t need to scream its lungs out or blind us with flashy colors to achieve its goal.