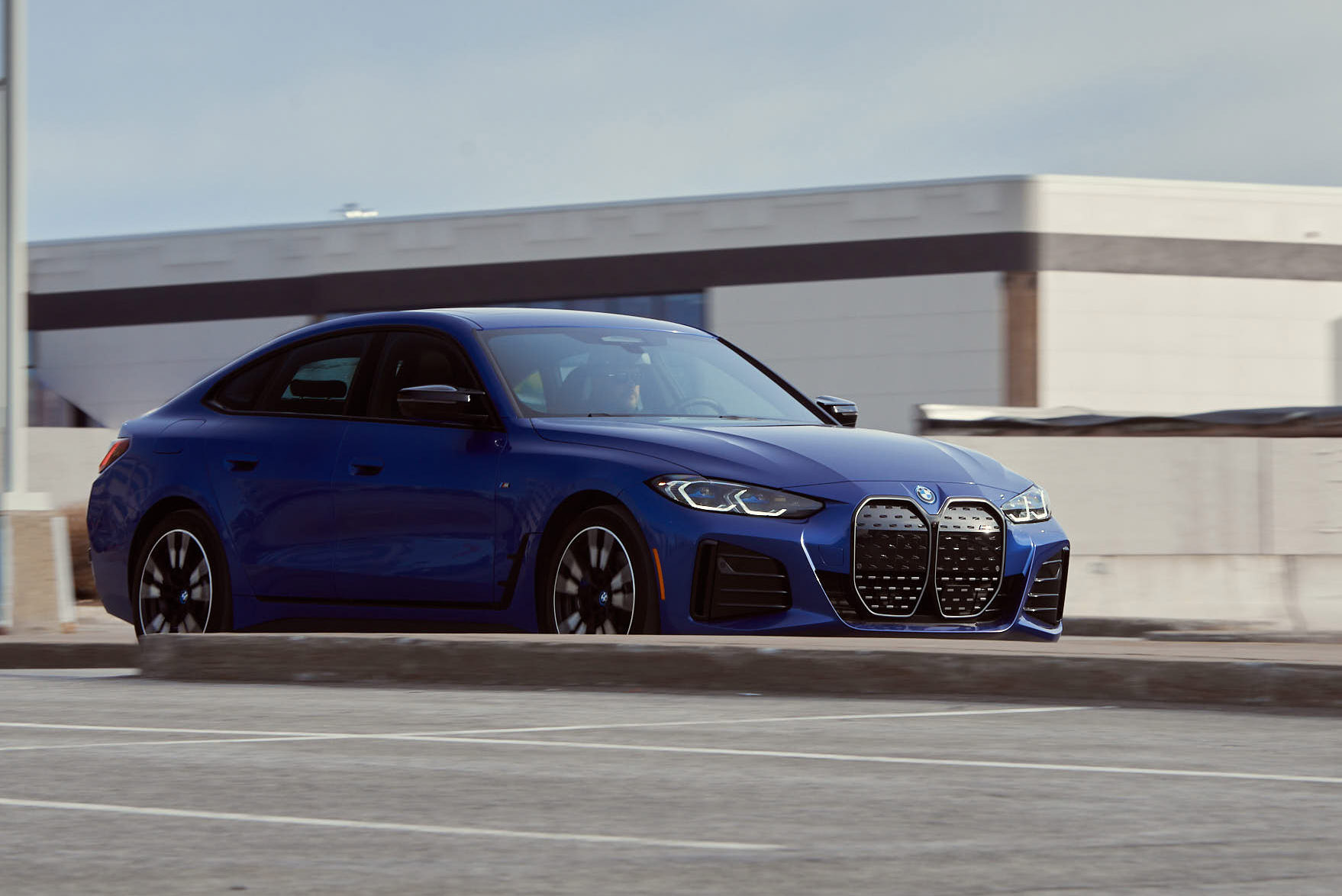 No, the BMW i4 M50 isn’t based on BMW’s all-new dedicated battery platform. That’s actually reserved for the iX crossover. I filmed a YouTube video on that one if you’d like to know more. The i4 sedan is actually based on the 3 Series and, subsequently, the M3. In other words, although it’s electric, it doesn’t drive like most electric cars. The i4 drives more like a proper sports sedan. It drives like a BMW. 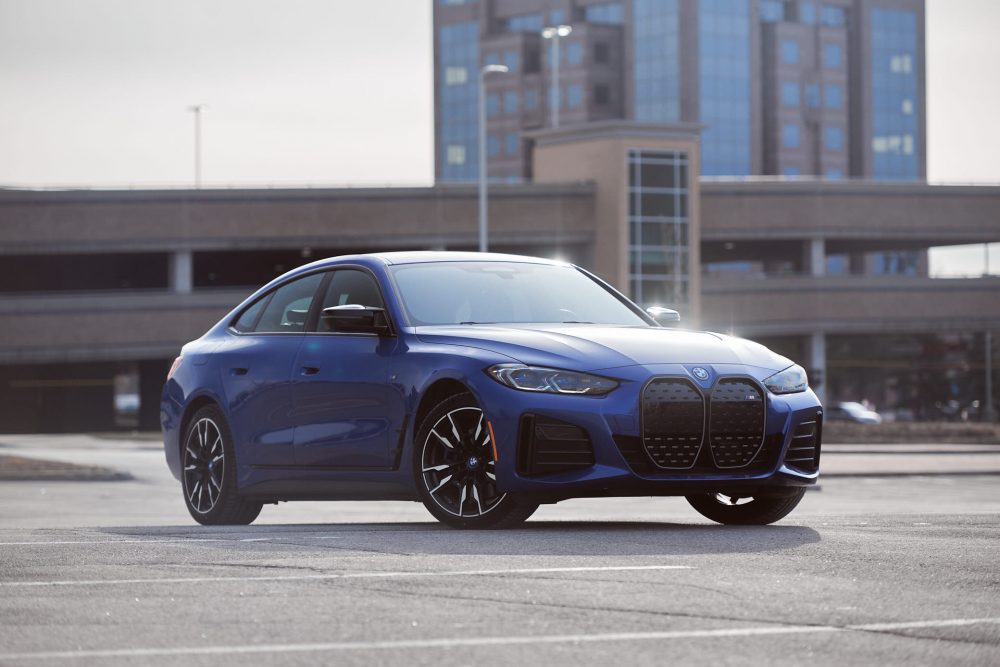 And BMW didn’t even try to make the i4 look any different than its other sedans and coupes, which I like a lot. This means it wears the same massive schnoz with complementary nostrils that look foolish but are somehow growing on me. What I particularly appreciate about the 2022 BMW i4 M50’s design is that it doesn’t look like it’s electric. Except for the lack of visible exhausts, this could be mistaken for any other BMW sedan. 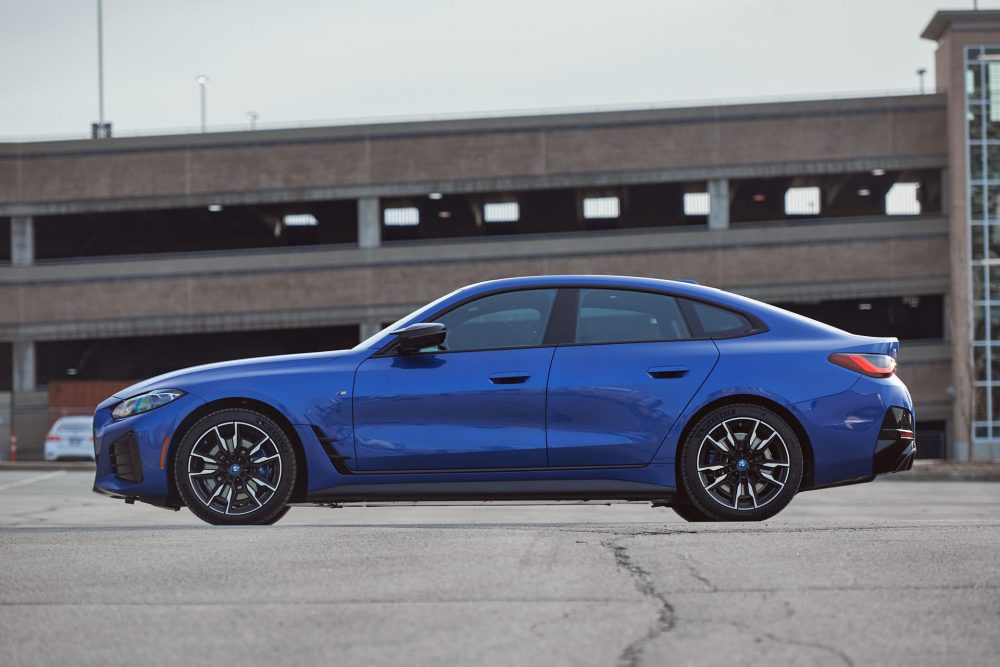 As a matter of fact it’s an exact clone of the 4 Series Gran Coupé BMW sells in the US, but not in Canada for some reason. Interestingly enough, to build it, BMW didn’t utilize its all-new dedicated EV platform, but rather a modified version of the existing CLAR modular architecture that it also uses for its other cars. Pretty much everything at BMW these days is based on this platform, from sports coupes like the M240i, to large SUVs like the X7. Even the Toyota Supra is based on it. 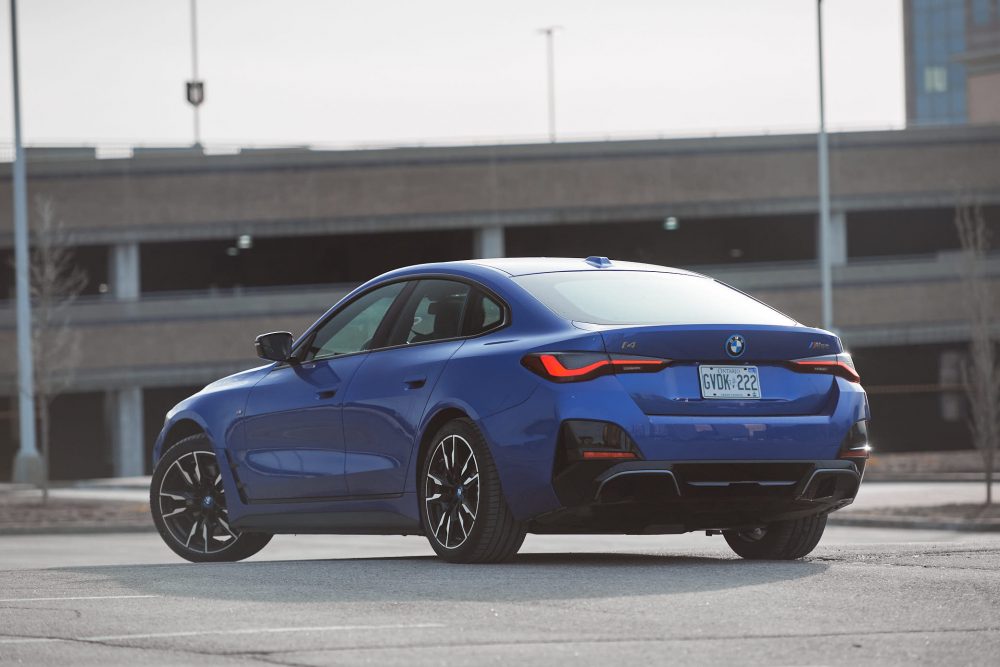 Underneath the i4, however, lies an 81.5 kWh battery (you can see its underbelly in the side profile shot). In the M50’s case – the i4’s high-performance variant – that battery powers two electric motors installed on each axle. The total combined output is rated at 536 horsepower and 586 lb-ft of torque. Big numbers that allow the i4 M50 to actually be quicker than an M3. 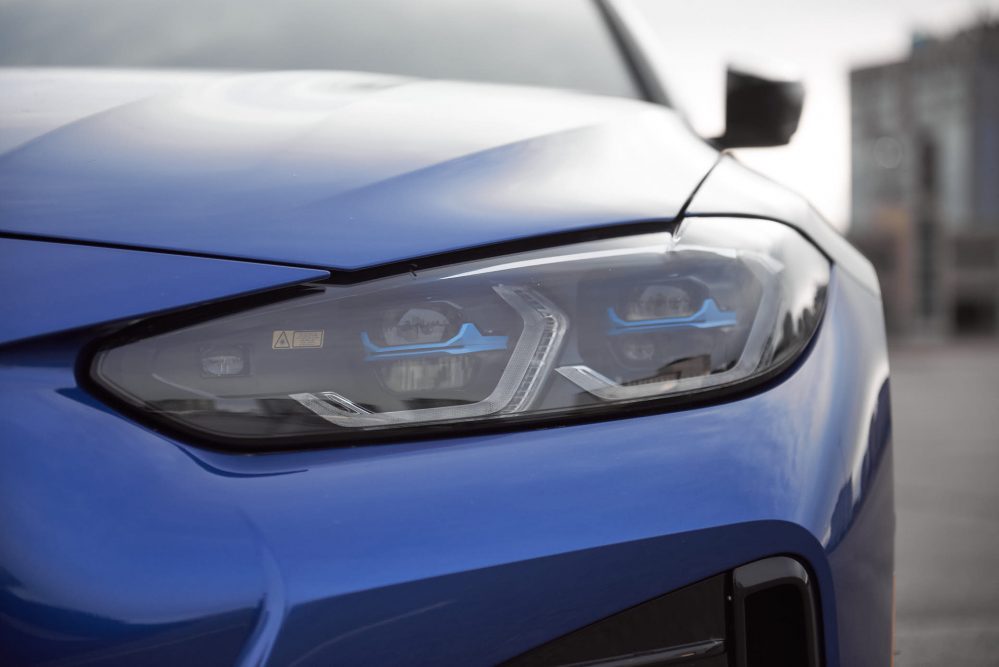 BMW claims that the i4 M50’s 0-96 km/h acceleration time, when using launch control, is of just 3.4 seconds, a full 0.8 seconds ahead of an M3 equipped with a six-speed manual transmission. That’s impressive considering that the i4 weighs in at a whopping 5,063 pounds, a full 1,243 pounds more than the M3. Range for the this car is EPA-certified at 365 km. 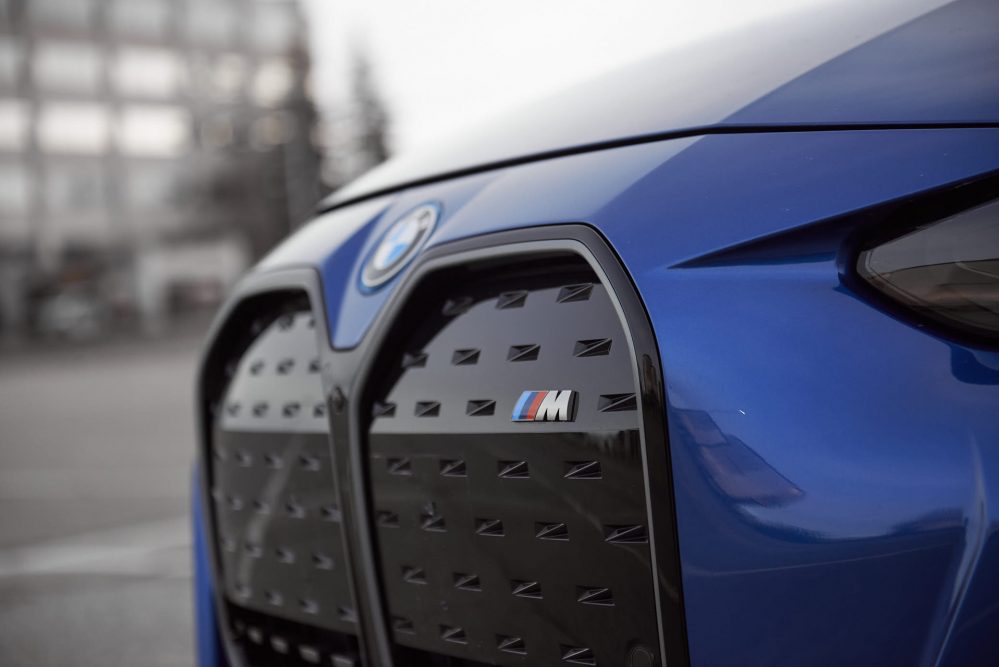 Pricing is, in typical BMW fashion, not cheap. The car itself kicks off at $72,990, which in itself isn’t too bad considering a Tesla Model 3 Performance is about 10 grand more. However, my tester, due to BMW’s ridiculously priced options, like the $5,750 Premium Enhanced Package, stickered at a steep $87,035. 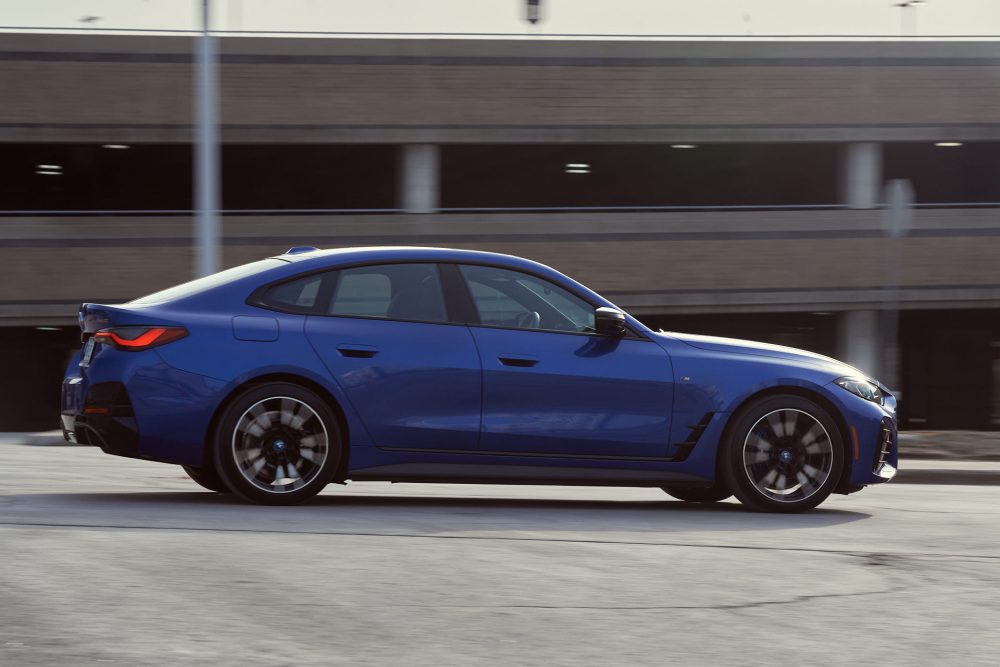 I was zero surprised by the i4’s performance when I stomped the throttle. After all, this is a BMW with an M letter slapped onto it. This i4 doesn’t disappoint. The M50 is blindingly quick, to the point of humiliating older supercars. However, what I wasn’t expecting its driving feel to be this good. 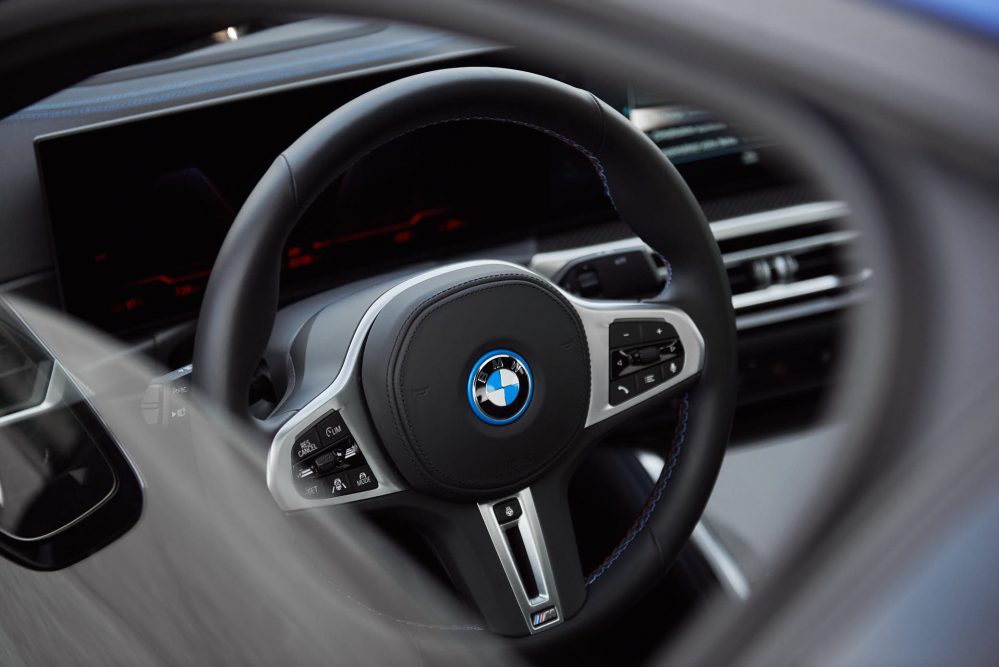 Let me be clear: the i4’s handling isn’t as polished or as analog as the M3’s, but it’s not necessarily bad either. Yes, the added heft and the way that heft is positioned in the car has huge impacts on its agility. The i4 is thus a much slower car to react, literally feeling overweight each time you ask it to do something.

Punch the accelerator pedal too fast with traction control turned off and, yes, it’ll kick out, but not in a smooth, graceful way like in an M3, but rather in a frantic, uncontrollable, almost robotic matter. You need to be much more alert when throwing this thing into a drift sequence. 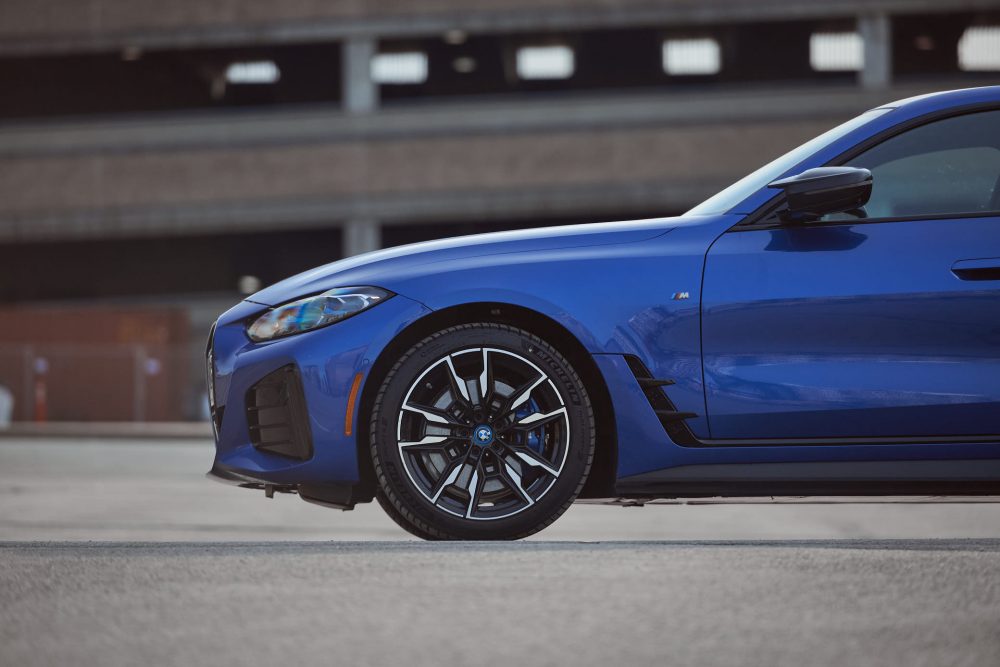 Hey, at least, it slides, and that’s where the i4 really distinguishes itself from other electric sport sedans. It has character. Between a Model 3 that does everything clinically too well without much drama or personality, and a Polestar 2 that’s built like a brick but performs poorly at the limit, the i4 is well balanced, polished and thoroughly thought out. Like the Polestar, it feels like a quality item, yet it would have no problem dancing with a Model 3 on a twisty bit of tarmac. 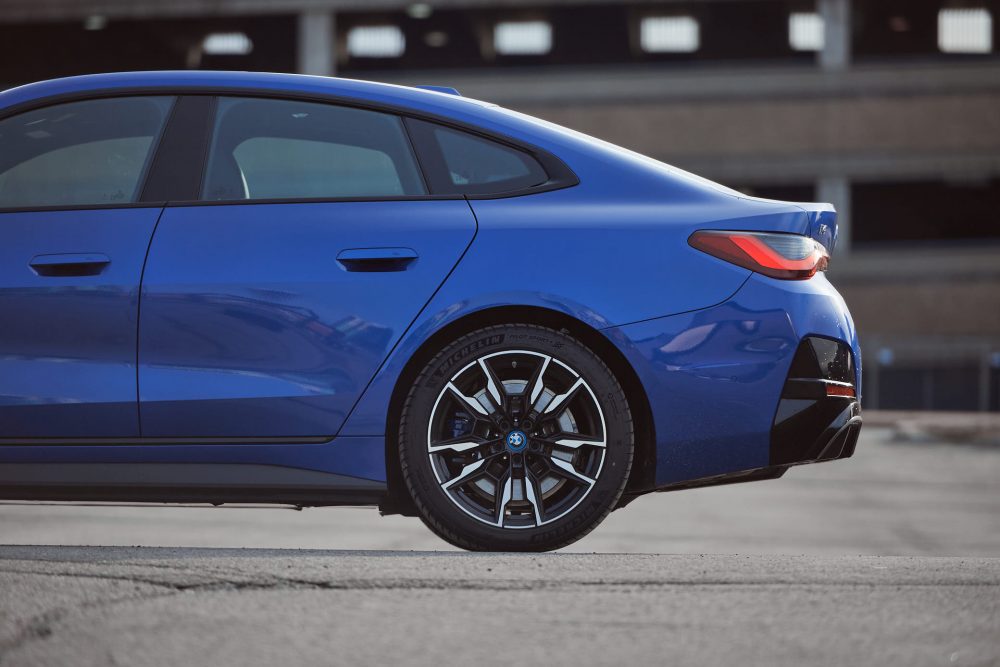 It’s mostly the grip balance that shines through the most here. While yes, entering a corner fast will require you to dial things back a bit due to all the weight that’s being thrown around. But flooring the accelerator pedal while coming out of a corner will grant you immense and usable grip. The i4 catapults itself out of an apex. The abundant torque acts as a slingshot to quietly propel you out of the curve. What’s especially appealing about this process is that like BMWs of yore, it’s all done with grace and composure. 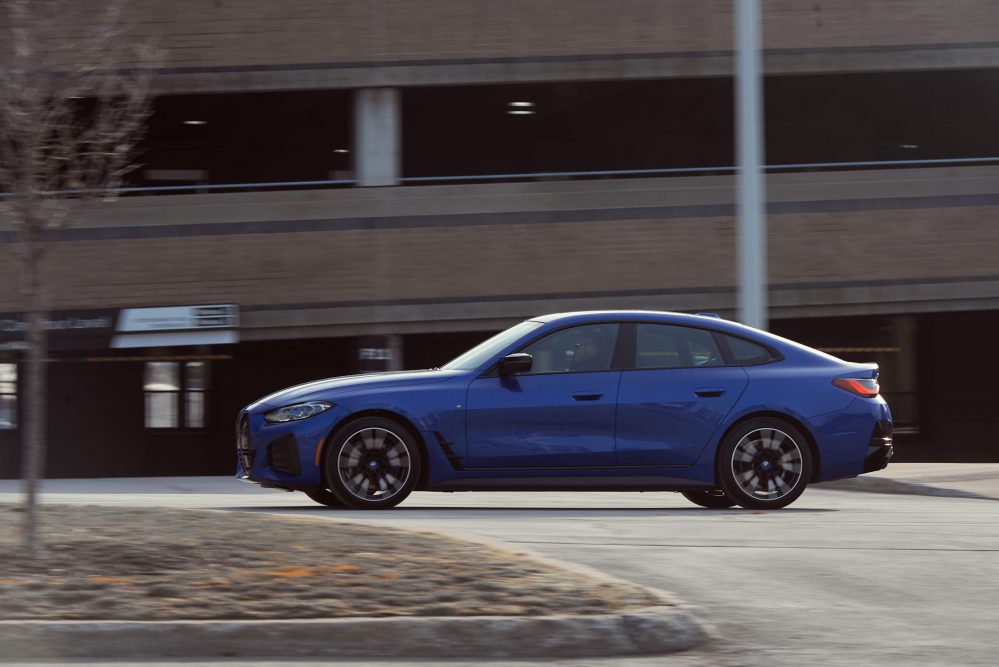 Another thing I’d like to point out is that while BMW advertises 386 km of range, I actually did better than that. During the week I had the M50, I averaged an energy consumption average of 20 kWh / 100 km. Based on that metric, my i4 exceeded 400 km of range on a single charge, all thanks to its very efficient Eco Pro setting. 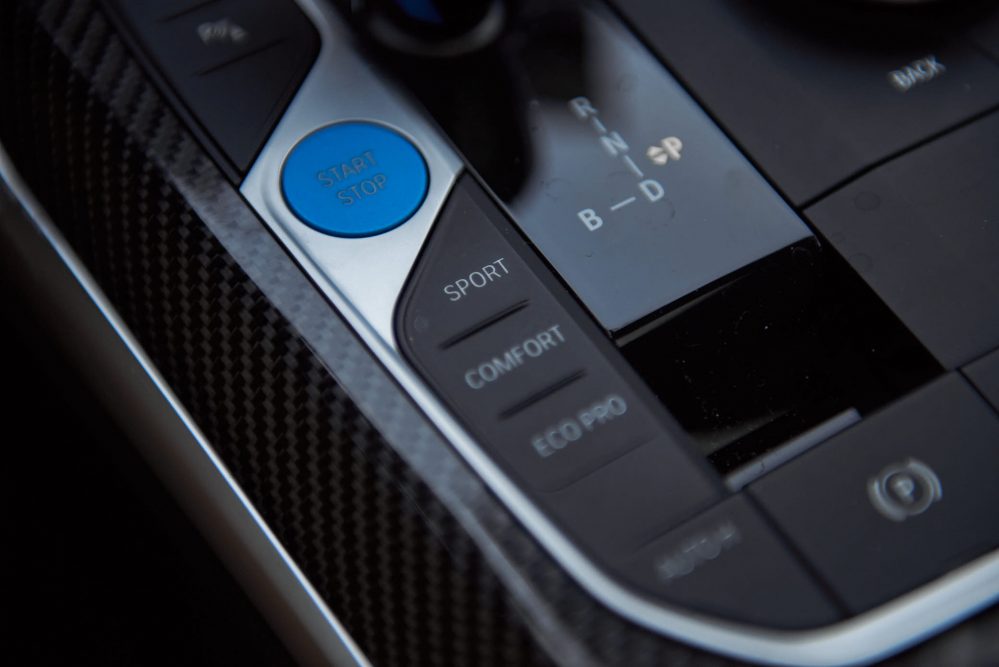 There are only a few downsides to this car. Unsurprisingly, the steering wheel has no feel whatsoever. Actually, the entire experience behind the wheel of an i4, while fun, is always highly synthetic. It also gets considerably less range than the base, rear-wheel drive models.

I personally don’t mind the Hans Zimmer-composed soundtrack. I find it rather cool actually. But if artificial spaceship sounds aren’t your thing, you probably won’t appreciate the fact that the pumped in audio in an i4 M50 stays on when in Sport mode. 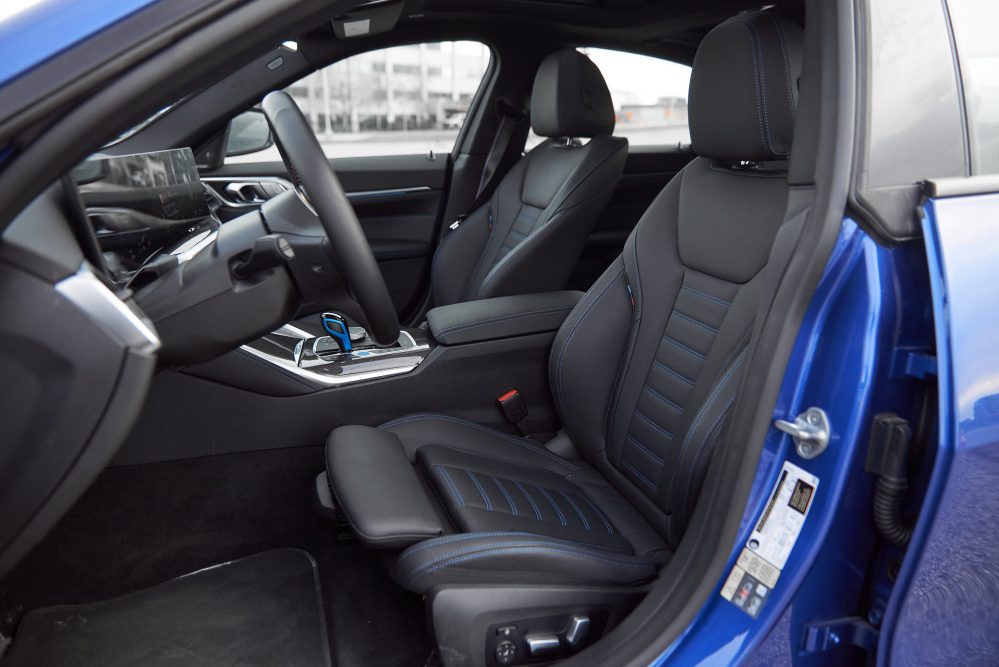 Getting inside an i4 is a little awkward due to the small front door opening. Climbing in the rear is an equally frustrating affair, especially if you’re tall. While it its a long car, the i4’s cabin never feels spacious per se. It feels snug and not particularly roomy in there. 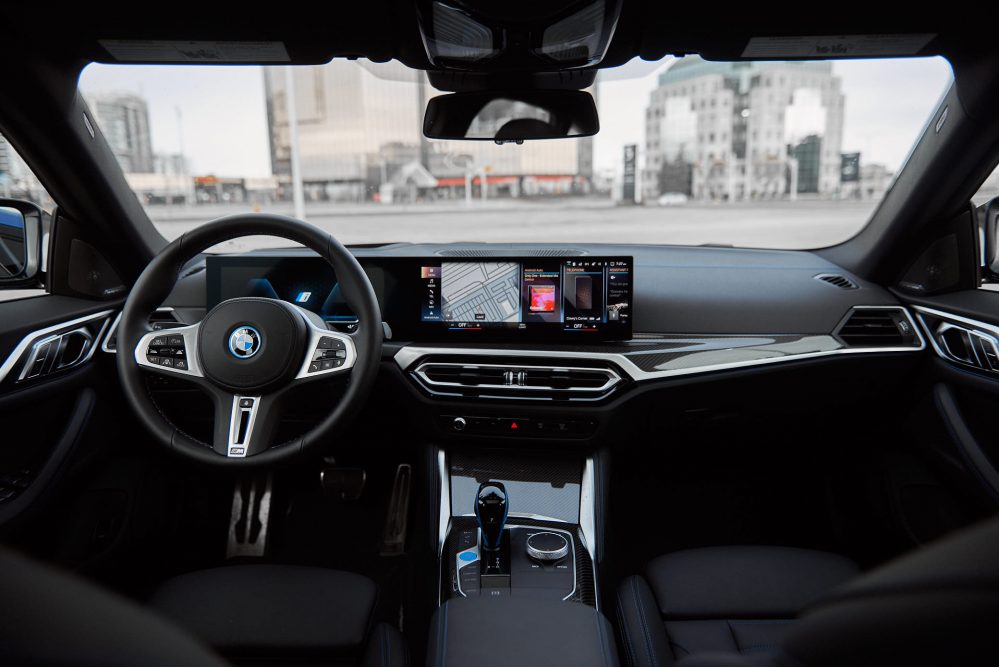 Unless you take a peak at one of its readouts, the i4’s interior never tells you it’s powered by something else than gasoline. There’s an actual gear lever parked next to BMW’s typical kn0b-operated iDrive infotainment interface. While more modern thanks to a new interface, this system continues to shine due to its excellent ergonomics, making it one of the best systems in the industry.

As for the rest of this interior it’s typical modern BMW, with the fully digital (and customizable) instrument cluster that’s now encapsulated inside one large screen, and the physical volume knob for the audio system. 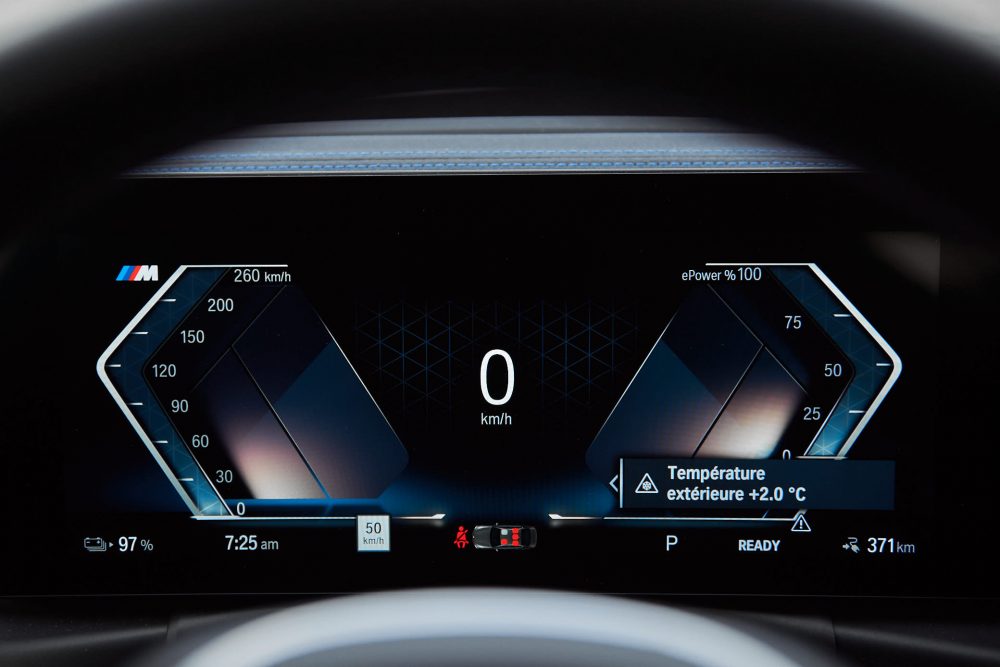 Build quality and the overall quality of the materials used in a 2022 BMW i4 M50 is second to none. BMW kept an understated approach here, a typical trait for this carmaker. While esthetically pleasing to the eye, this cabin never screams at you. It’s beautifully tamed and always understated. 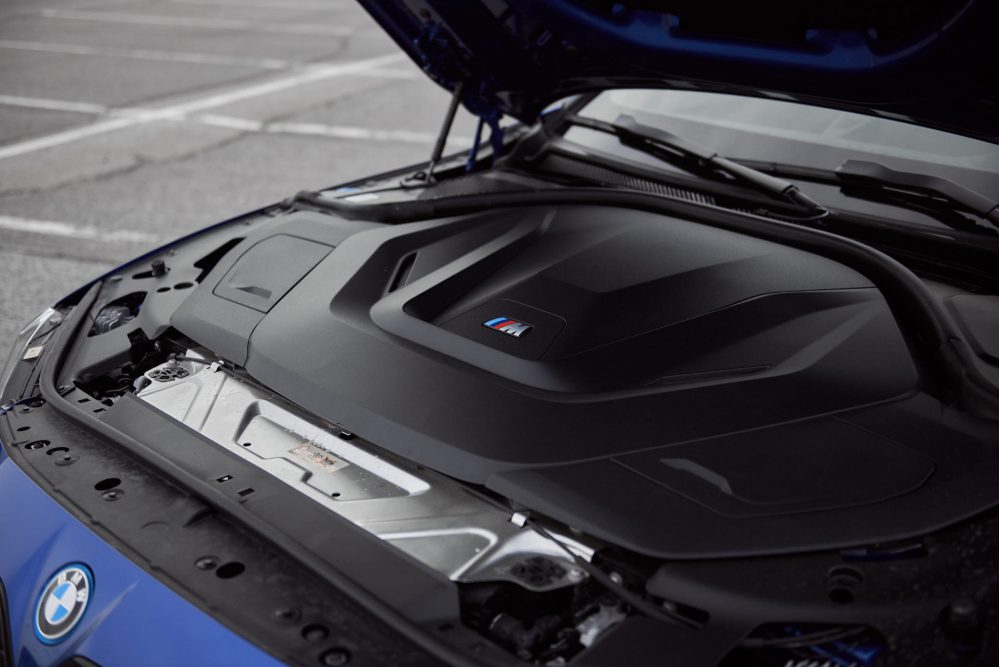 Having a sportback configuration at least gives the i4 a bit more cargo space than a conventional 3 Series. When all seatbacks are folded flat, the this electric sport sedan will engulf up to 1,290 liters of your gear. That’s more than a Kia Stinger (1,132 liters). The i4, however, has no frunk due to the fact that this platform was engineered to house a thermal engine up front. 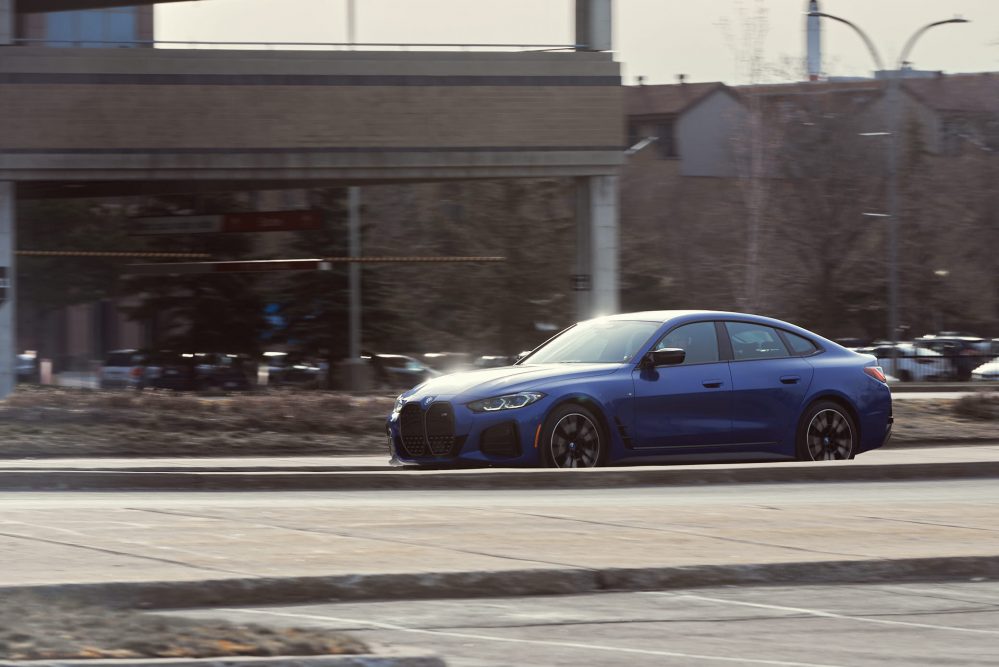 With the 2022 BMW i4 M50, BMW not only shows how seriously it takes electrification, but also that it can continue to build seriously capable sport sedans, even without the presence of an inline six underneath their hood. It may not be as mechanically engaging as an M3, but the i4 is simply faster and more efficient. Perhaps, more importantly, is that it’s good enough to give the Tesla Model 3 Performance a run for its money.