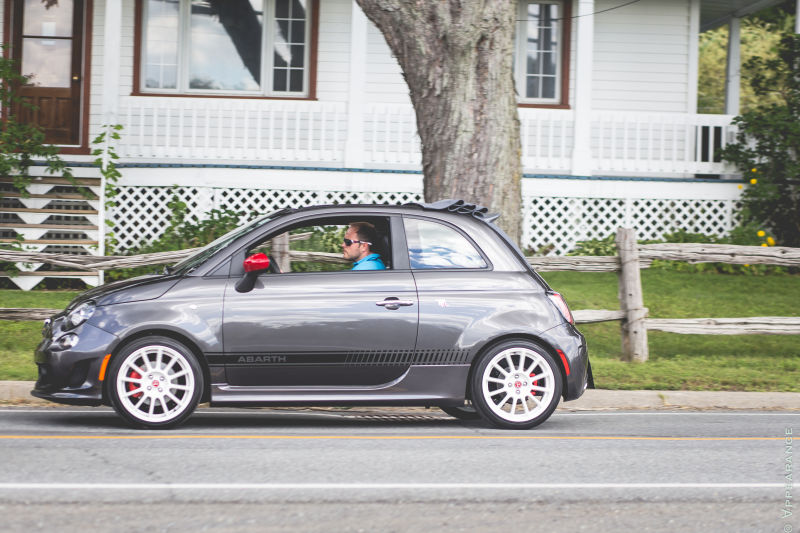 As far as hot hatchbacks go in North America, none is more bonkers than the Italian Fiat 500 Abarth. Every time I see one on the road, it makes me smile. It just looks so damn cool. So, when my friends at Lasalle Fiat offered me the keys to a fully loaded cabriolet version on a hot summer’s day, I just couldn’t say no to a test drive.

For those of you who are still wondering what Abarth is, they’re Fiat’s performance division, essentially the equivalent of what AMG is to Mercedes-Benz. Abarth’s roots (pronounced “æ- bart”) trace back to the early days of the Italian automaker when Carlo Abarth would build performance exhausts and race cars. 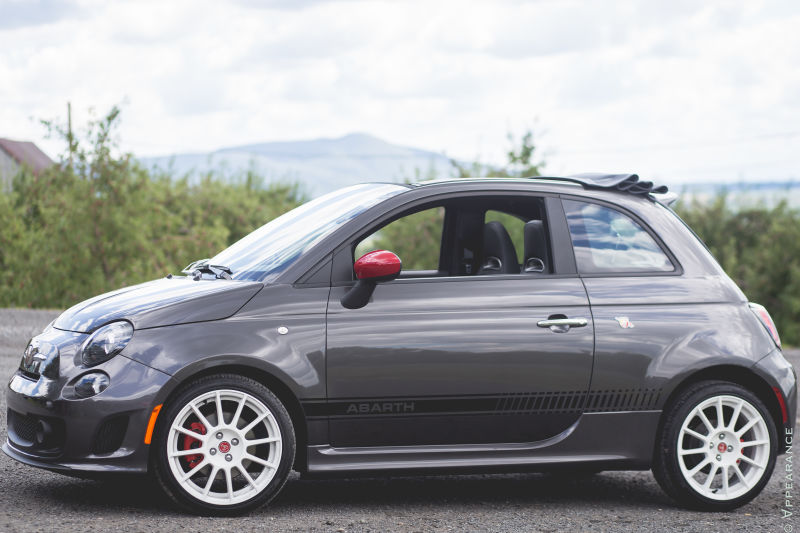 Let’s all be honest with ourselves here, as car junkies, there’s not much about the Fiat 500 that attracts our attention. Yes, it’s cute and stylish, but apart from being purchased by women and homosexual hairdressers, it’s not exactly going to set an enthusiast’s hair on fire (pun intended).

So, the Abarth then. Why should you care? Well, for starters, it’s a 500 that was lowered, stiffened, reinforced from pretty much everywhere, and fitted with humongous (for its size) 11-inch brake rotors, forged aluminum wheels, and sticky Pirelli P-Zero tires. 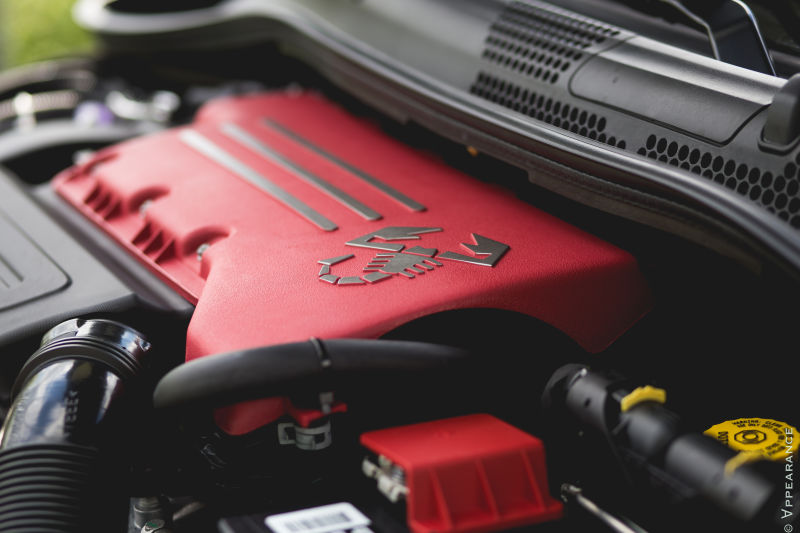 Then, they rip its guts out and stuff a 1.4 liter, multi-air, turbocharged, twin-intercooled engine under that tiny hood. The whole thing is bolted to a close ratio 5-speed manual transmission (an automatic is available) that drives the front wheels. The result: 160 horsepower and 170 lb/ft of torque in a car that only weighs 2,500 lb.

And it definitely looks the part too. Up front, you’ve got smoked headlights, a chin spoiler, and a reworked front fascia to accommodate those twin intercoolers, so it’s no longer saying “hi” with a grin, but frowning like a pissed off clown or something. 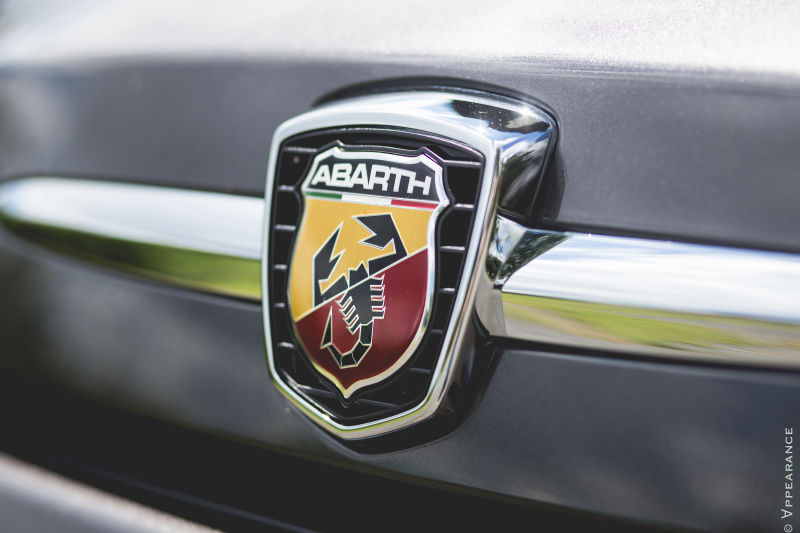 You then get an Abarth racing stripe slapped on each side, scorpions painted all over its body, supportive bucket seats with red stripes, twin exhausts, a rear wing and diffuser. My tester was equipped with the optional white 17-inch wheels and red mirrors, which contrasted well with the gunmetal paint, making the car look even more wicked.

The Abarth basically looks like a Fiat 500 that spent the weekend in hell.

It Tries Desperately To Be A Ferrari 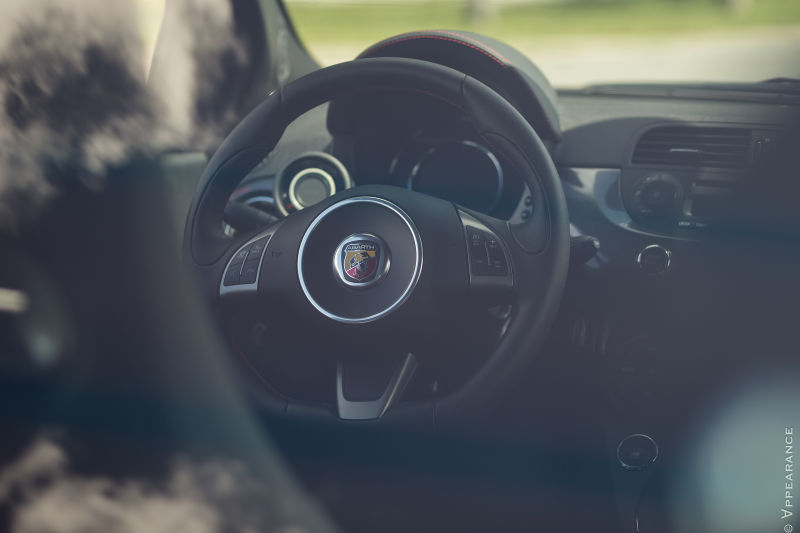 Hop inside, slide into the beautifully-designed leather seats, turn on the ignition and…holy shit! What a sound!

Seriously, this little car sounds properly loud. It’s the meanest thing I’ve heard this side of a Hellcat.

There are no mufflers under there, so it’s pretty much all straight exhaust from the engine. You’re immediately greeted to a deep burble; give it a few throttle blips and it’ll pop and burp like a drunken, farting dwarf.

In front of you, you’re presented to a simple, yet functional gauge cluster, a nice, fat steering wheel, aluminum pedals, and a protruding boost gauge. The interior is rather stylish too with red stitching here and there and an overall eccentric design. It’s quite a nice place to be and most importantly, I never felt cramped in there. In fact, the 500 feels much bigger than it is.

Not sure about the rear seats though. I’d only recommend them for people who have no legs.

But yeah, this car tries so desperately to be a Ferrari it’s ridiculous. 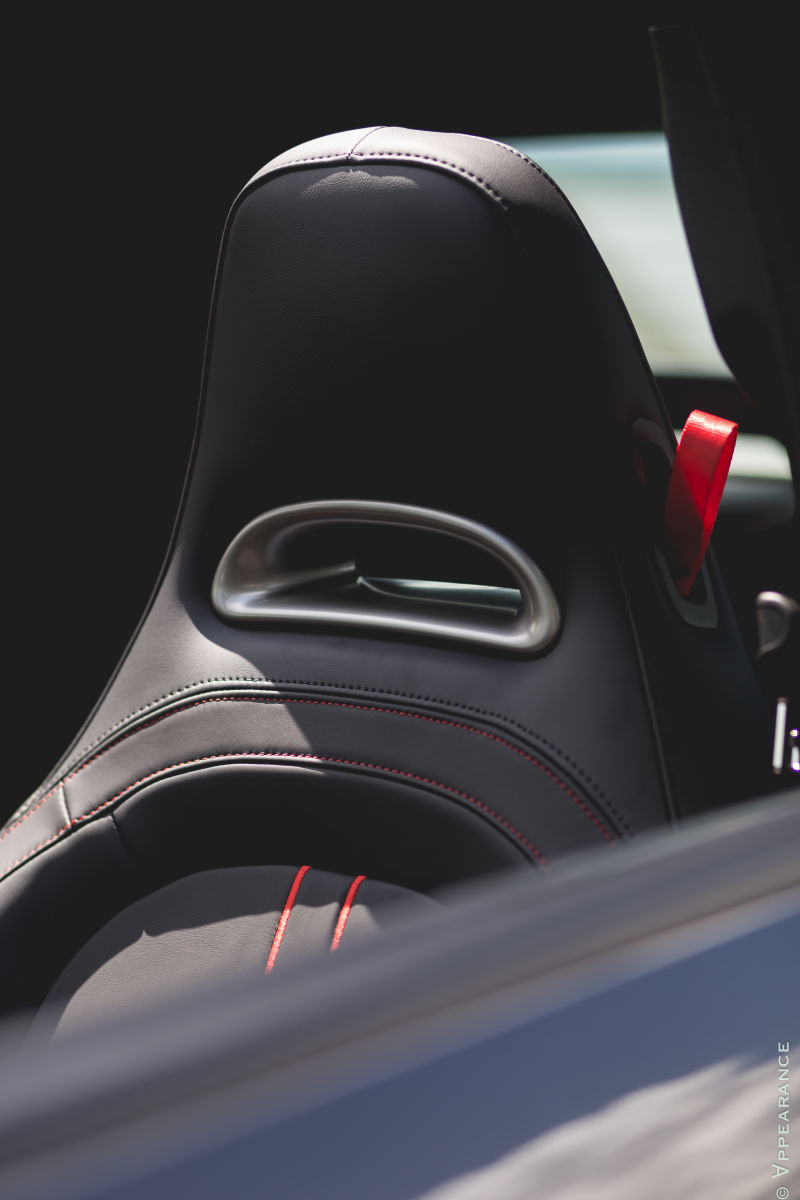 On the road, things become even more bonkers. The suspension is nice and stiff, but not so much to crush your spine. It’s actually rather compliant. The steering wheel, a fat chunk of a thing, with a flat bottom, feels great to grab and, with a shortened steering rack, is quite responsive with just a tad squishy to make it livable in everyday driving.

Then there’s the ergonomics, which are a whole different set of LOLs. Since the car is shaped like a peanut, and everything is built upwards to maximize interior room, you’re sitting high and straight, feeling like you’re on top of a tripod. It’s a rather unusual seating position, but it definitely works. I do wish the steering wheel had a telescopic adjustment though, it just always felt far from me. 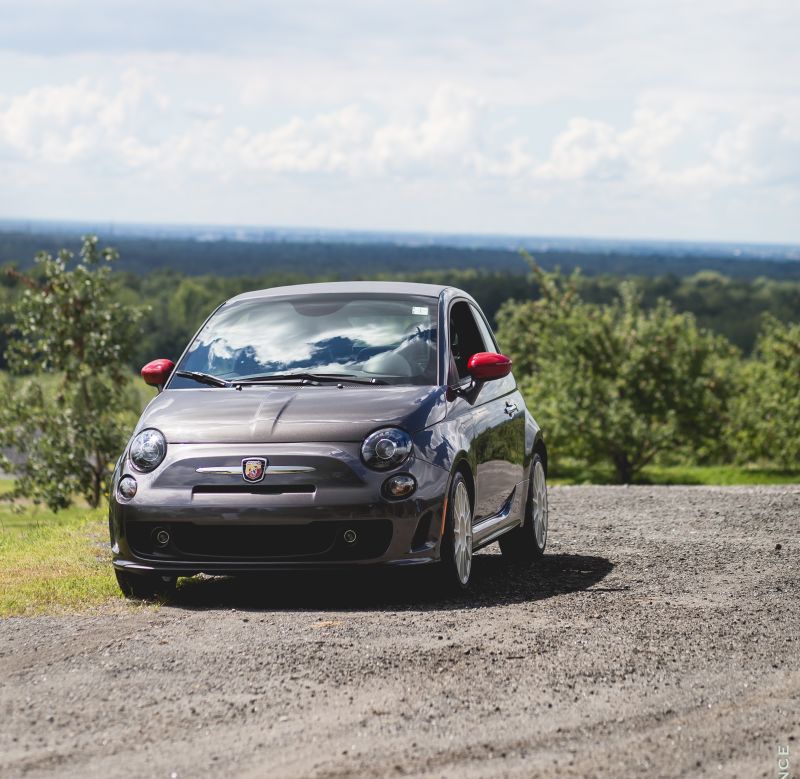 There’s a high dashboard with, frankly, ok build quality, and the window sills are high, which help make this car feel bigger than it is. Right under the HVAC controls sits a big, fat, leather-wrapped shifter, whose shift action is satisfying, but not yet on par with other offerings (VW, Honda). There’s just no mechanical engagement when rowing through the gears.

That high seating position though, well it further increases the feeling of speed, and I’m totally ok with that. 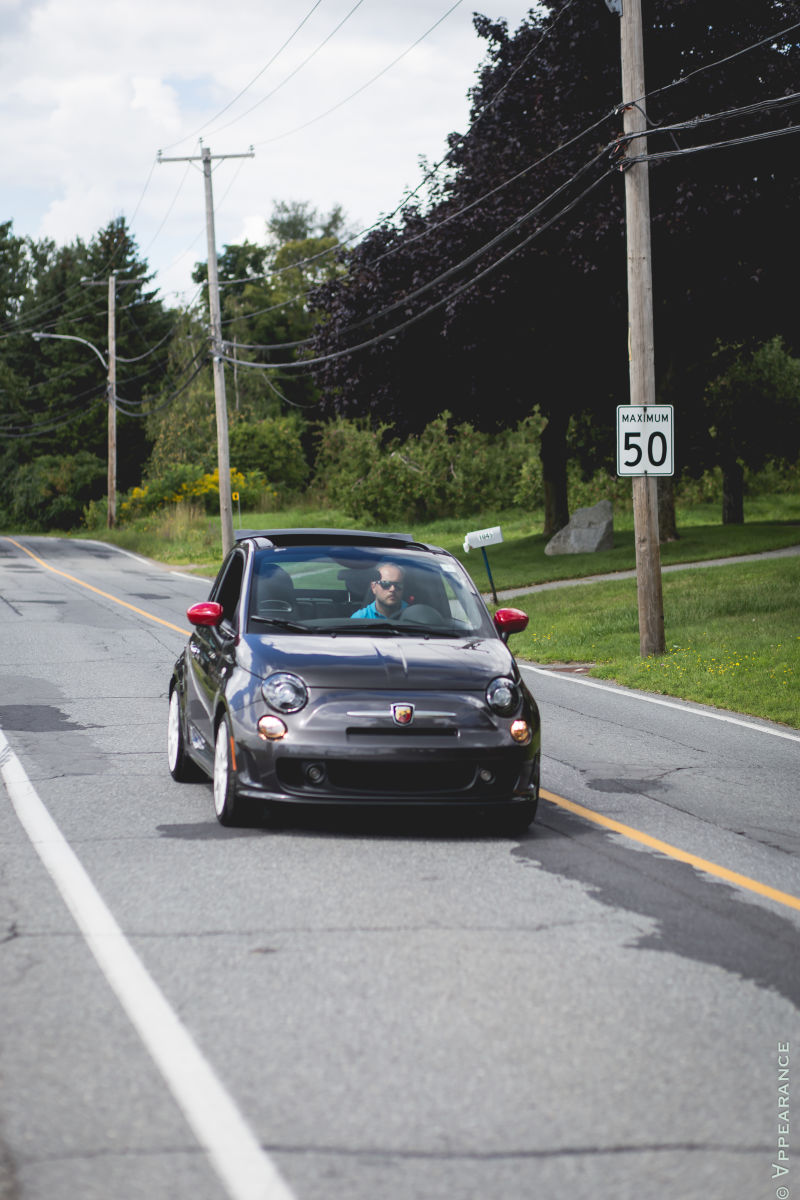 As you’re driving down the road, laughing your brains out from hearing those obnoxiously loud whooshes and pops coming out from underneath this micro machine of a car, you get the sense that everything about the Abarth was designed to make you smile. It’s just oozing with character.

Smash the throttle, wait a bit … wait some more, and you’re suddenly shoved into your seat as the turbo spools to 18 psi of boost (!!).

Keep the revs past 3,000 rpm though, and it will actually fly, delivering strong boost all the way to its 6,500 rpm redline. There isn’t so much actual power, 0 to 60 comes in about 7 seconds, but it’s the way the Abarth delivers that power that is truly engaging. It sounds pissed off, especially when you floor it at low rpm in a higher gear. It growls and gulps, commanding you to wreak havoc everywhere you go.

Every time I’d come to an intersection, I’d blip the throttle just for shits and giggles. 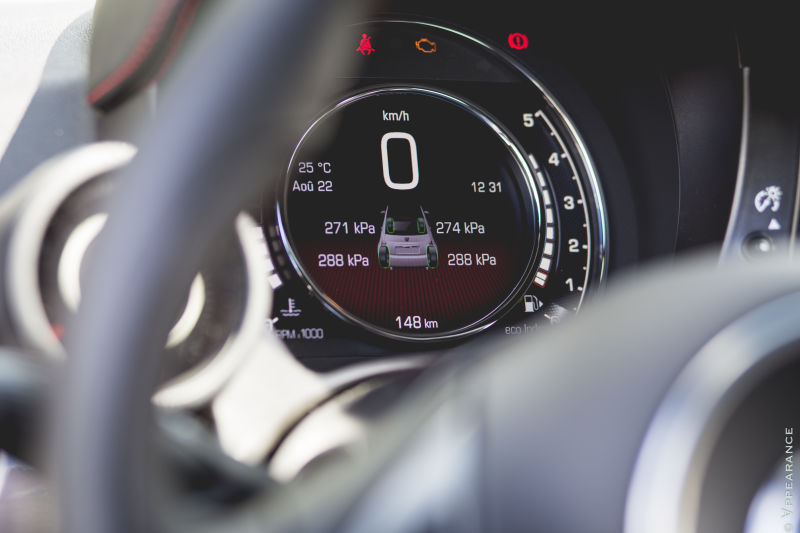 On a performance standpoint, it’s obvious that the people at Abarth know what they’re doing. In the bends, the tiny Fiat’s lack of weight and stiff suspension transcend to a nice planted demeanor. There’s body roll, of course, but give it the mickey, and it sticks to the road. In sport mode, the steering reacts instantly to your inputs. In the bends, it’s surprisingly tractable and the puny wheelbase makes it feel like a go-kart. This car actually feels wider than it is long.

Enter a corner too fast, lift off the throttle, and the rear suddenly wiggles around, demanding slight throttle input to bring it back into place. It’s all very forgiving and frankly quite entertaining.

Brakes are spot on too; they bite with authority and never showed any sign of fade.

Great Hardware On The Wrong Chassis 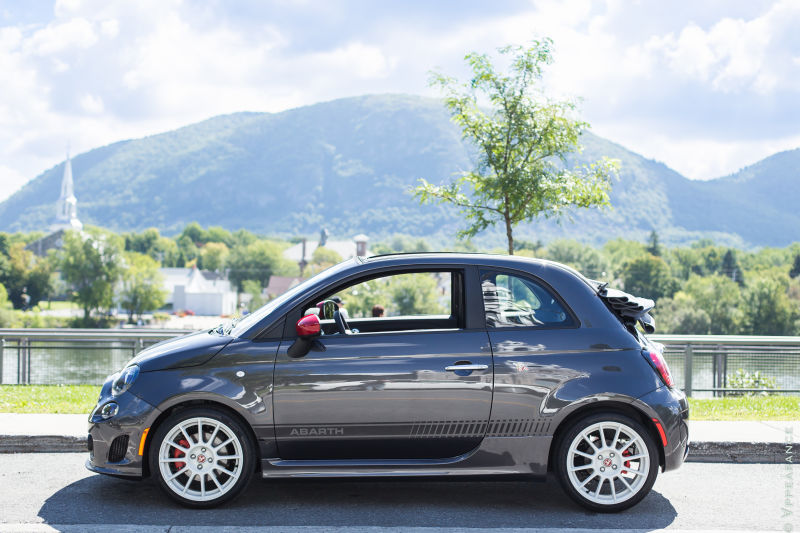 Unfortunately, this is where things tend to go a little south. You get the sense that the Abarth has all the right ingredients to be a truly competent machine, but that its chassis is simply unable to follow.

For instance, on several occasions, under hard braking, you feel the whole car shift forward and become seriously unstable, as if those fat brakes were too much for the car to handle.

Same thing in the bends; when driving over uneven surfaces during spirited driving, you can literally feel the whole car flexing under stress, preventing the driver from really pushing this thing to its limits. There’s just always a sense that the suspension and tires are willing to take more, but that the chassis fails to deliver.

And that can become somewhat scary.

Then, there’s the engine. Yes, it may make all sorts of cool noises and offer plenty of boost, but that turbo lag causes flat power spots and unpleasant surges at times, especially at low rpm. If it wasn’t for that snail under the hood, the 1.4 liter would be useless.

There’s an overall sense that, compared to some of the competition, the Abarth lacks refinement.

Should You Buy One? 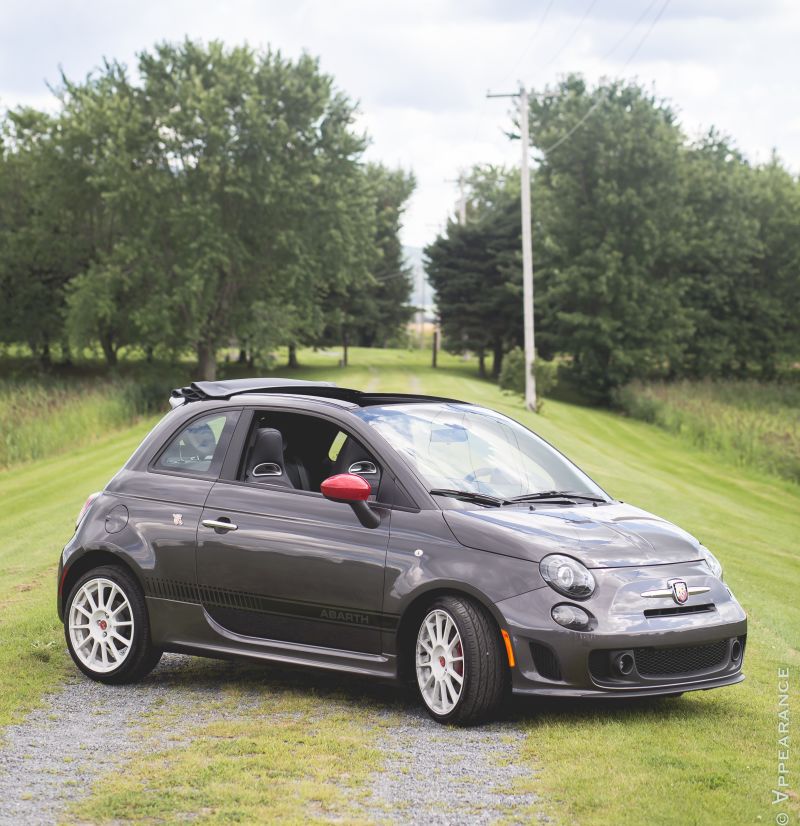 I really enjoyed this car, I truly did. Quirks aside, it’s a playful and rather competent little machine. It made me smile every time I looked at it, people gave me great comments, and it made me laugh out loud maniacally every time I drove it. Any car that does this wins a place in my heart.

Would I recommend the cabrio with all the added goodies like my tester had?

Because at $26,495, the little Fiat suddenly becomes rather expensive, putting it awfully close to an entry level Volkswagen Golf GTI, which simply doesn’t make sense.

However, at an entry price of $22,495, the Abarth is a compelling argument. Yes, it sits in the same price bracket as the stellar Ford Fiesta ST, which offers more refinement, power, and two extra doors, but the Ford lacks something the Fiat 500 Abarth is dripping with: character and soul, and that my friends, is something you just can’t explain on a spec sheet.

+
+ Filled with character and soul.
+ Fun and engaging to drive, all the time.
+ Looks seriously cool.