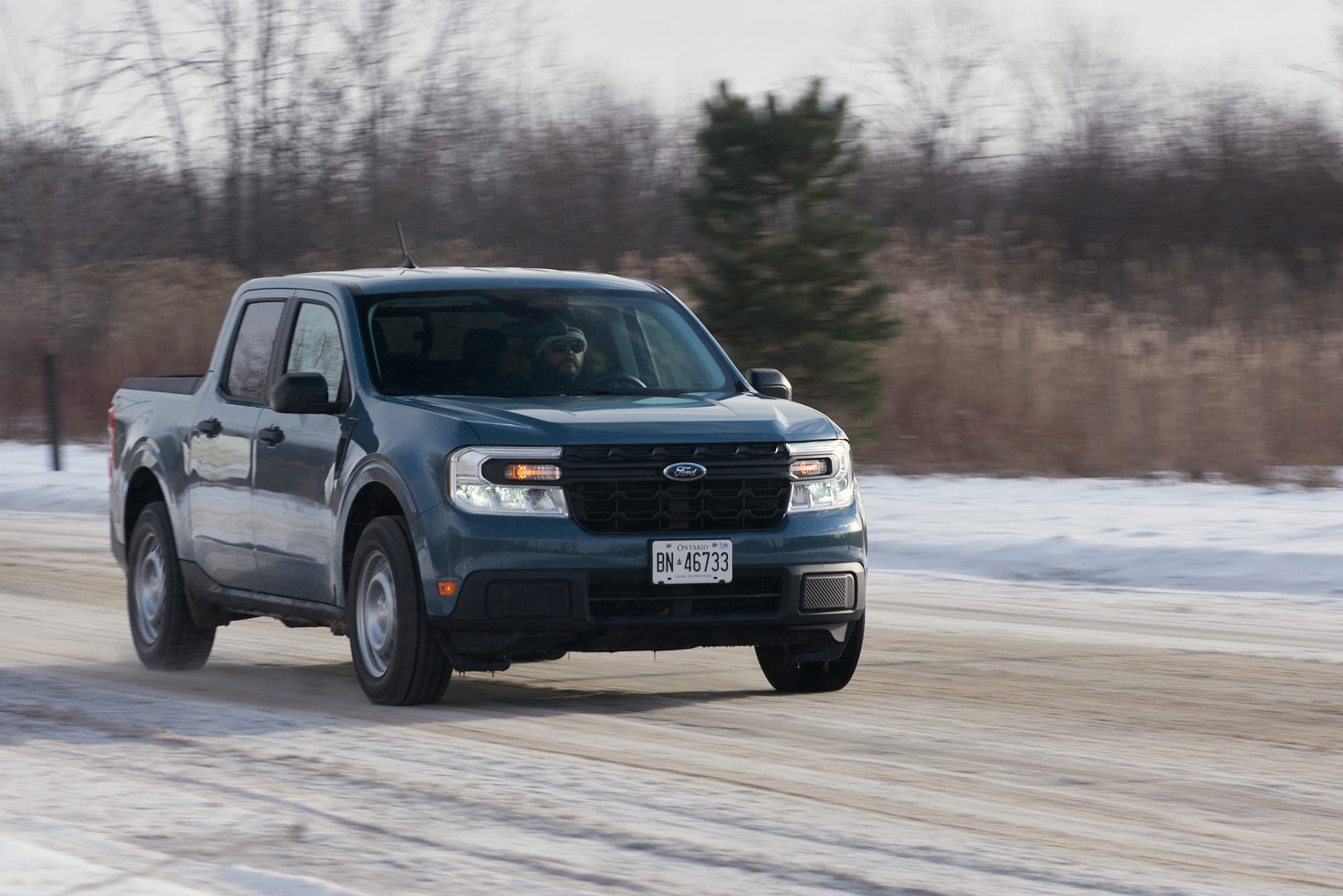 The 2022 Ford Maverick kicks off at $25,900 here in Canada. Ok, fine, that’s a lot more expensive than a 2011 Ford Ranger sold new at $11,999. But in today’s money, anything under 30 grand is considered cheap. Hell, Honda Civics are 35k these days. So the fact that Ford was able to pull this off is an accomplishment all on its own. Plus, the Maverick is just cool, period. 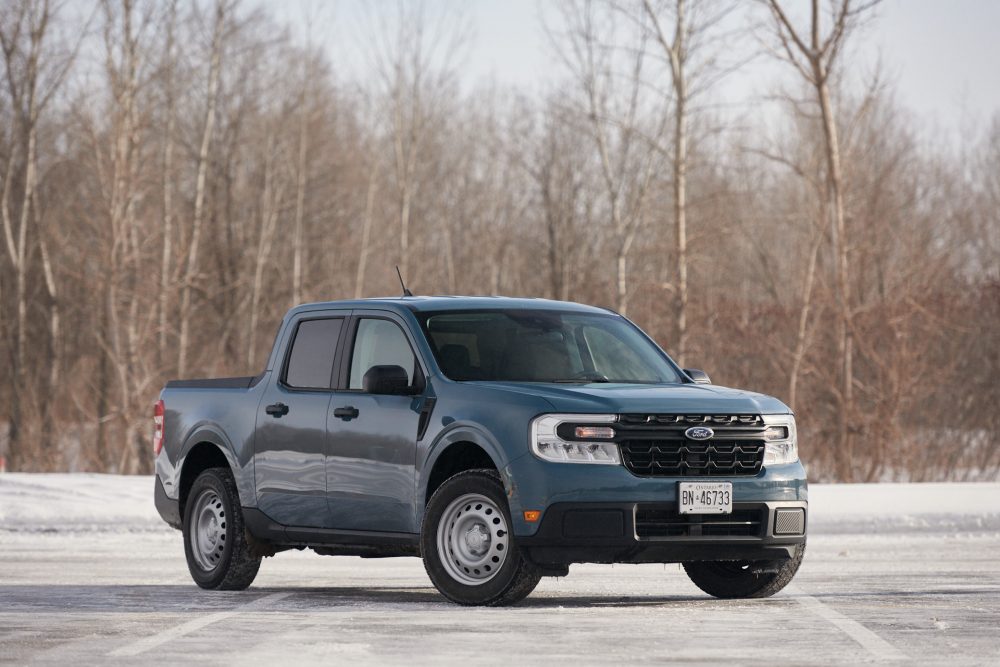 I realize that not everyone likes the way the Maverick looks. They accuse it of being too cute, too cartoonish and too, well, carlike. I say that’s precisely where lies its charm. This is basically the emoji of a Ford F-150. Check out the steelies on this badboy! 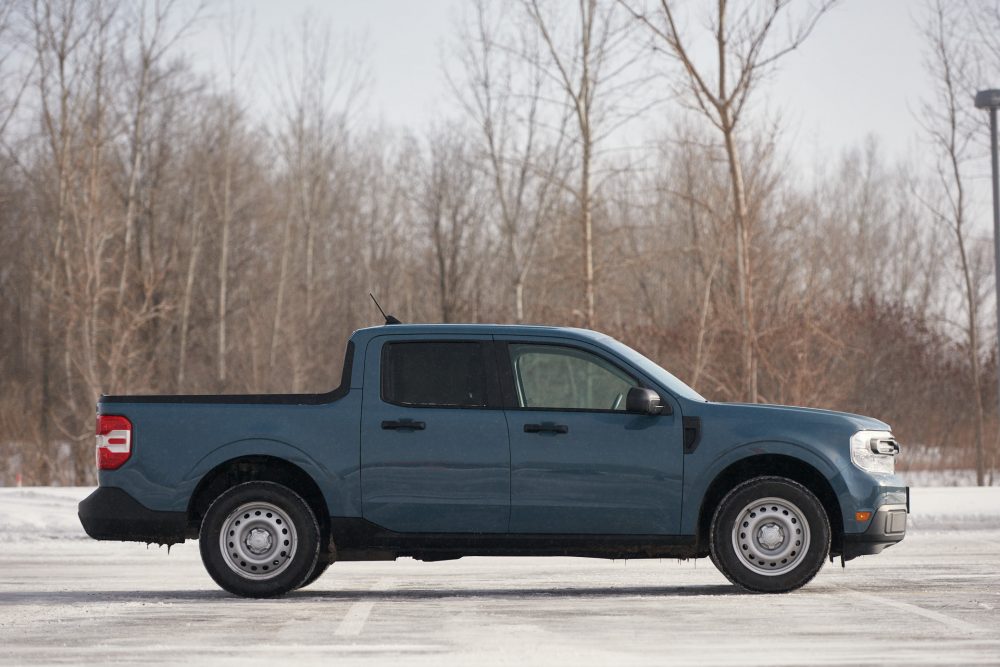 Yes, the 2022 Ford Maverick is super tiny. And yes, it’s built on a car platform. A compact car platform as a matter of fact, one called C2 over at Ford. It’s that same platform that underpins the Ford Bronco Sport, but also the European Ford Focus. LMAO. Mind you, the Maverick isn’t the first unibody trucklet. Honda’s been doing it for quite some time now with the Ridgeline, and Hyundai now sells the Santa Cruz, which is essentially a Tucson with a bed. 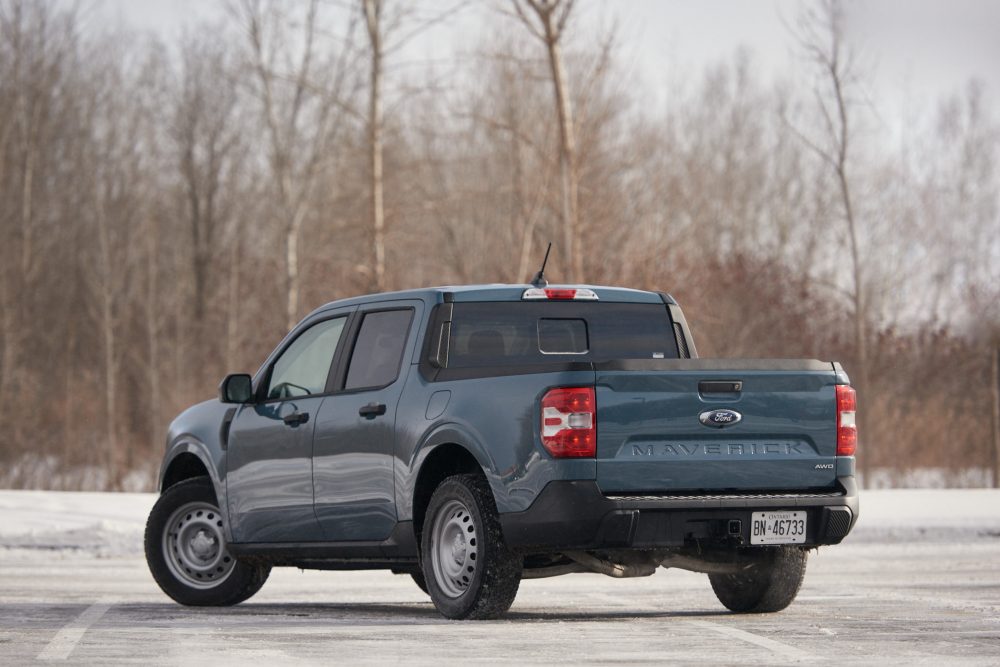 The Maverick slots underneath the Ranger within Ford’s truck lineup. And with the EcoSport now gone (will we even miss it?), the Maverick is now Ford’s most affordable vehicle. It only comes in one configuration: four-doors with a 4.5-foot bed. Two engines are offered, the first being a 2.5-liter hybrid taken from the Ford Escape. It’s good for a combined 191 horsepower and mated to a continuously variable transmission (CVT). It also only comes with front-wheel drive. In that spec the Maverick will tow up to 2,000 pounds. 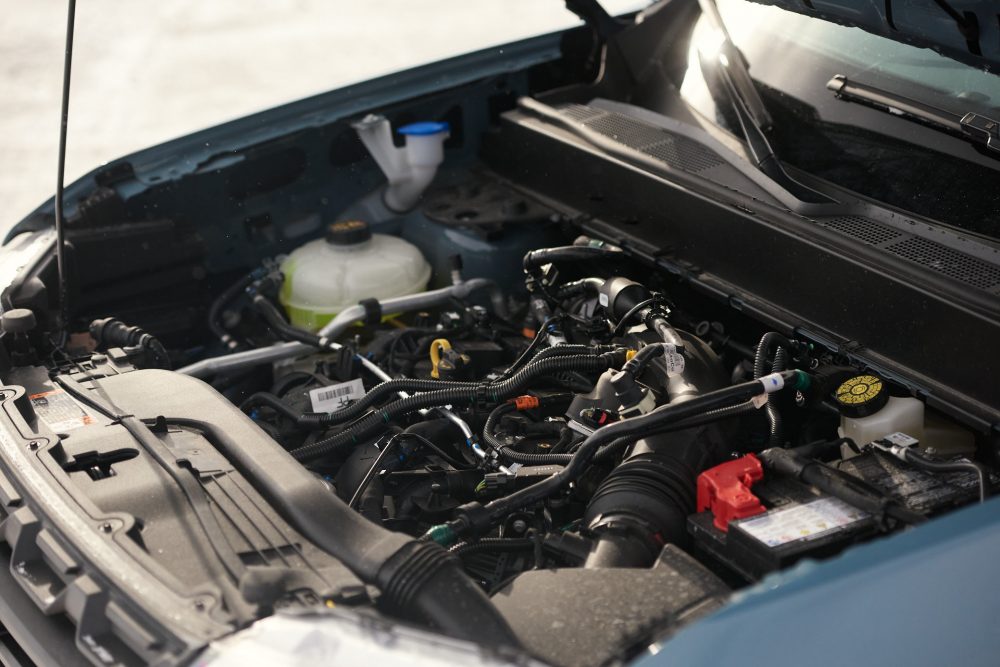 My tester, a base XL, was fitted with the optional turbocharged 2.0-liter four-cylinder. It’s the engine I would get due to a much more substantial 250 horsepower and 277 lb-ft of torque. It also ditches the stupid CVT and replaces it for an eight-speed automatic gearbox. Opting for this drivetrain will automatically grant you all-wheel drive, as well as a 4,000-pound towing rating, as long as you tick off the $800 towing package. 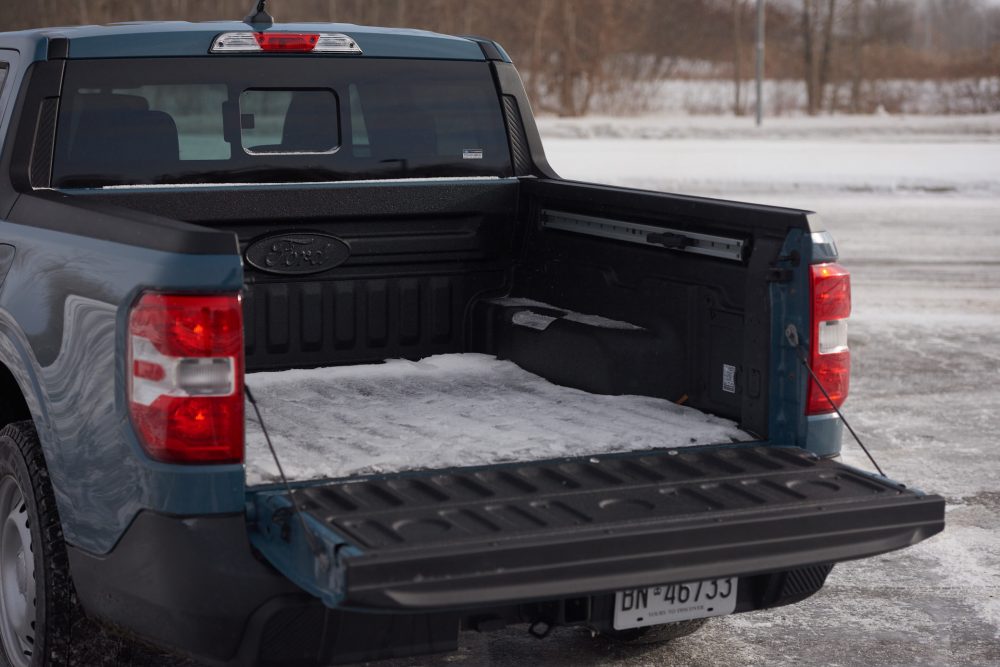 Even with a few bells and whistles added on, my tester never passed the $30,000 mark (before freight). A top of the line Maverick Lariat won’t set you back more than $35,000 before optional packages. I mean, 35k is the price of a Mazda3 Turbo for Christ’s sake. 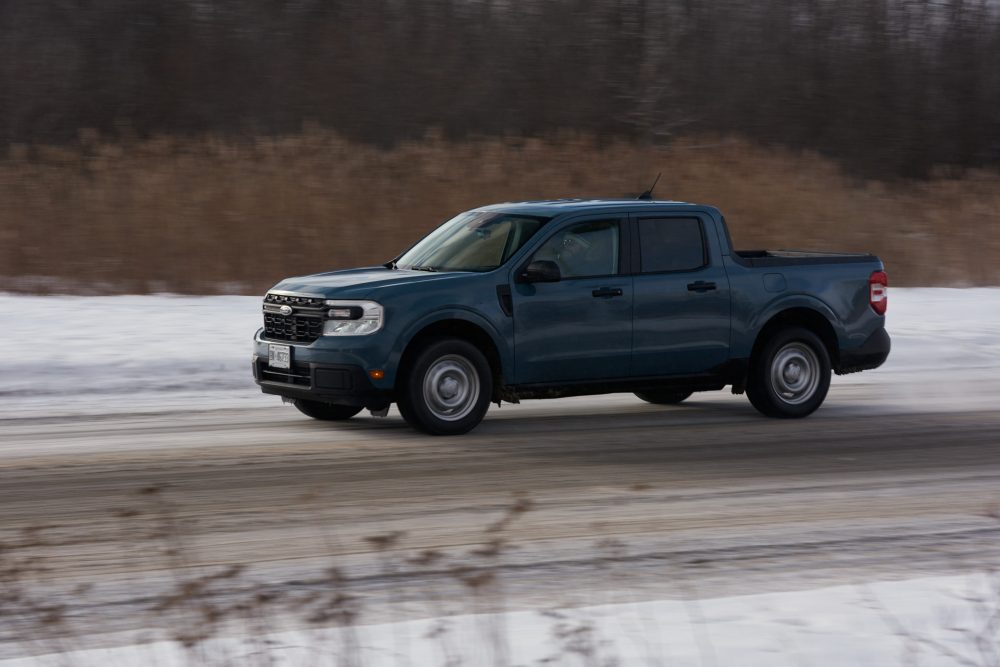 At this point you’re probably looking at these pictures and wondering: “why the fuck is he so excited about this? It’s just a shitty little truck with a Ford Escape engine and weak bones.” The reason I love the Maverick so much is precisely because it makes do without the bullshit equipment nobody needs. There isn’t even a cruise control in this thing (although I do wish it had one). There are no annoying beeps telling you to do not do this, or that. No fancy digital this or virtual that. You start its engine using an physical key and you pull the seat rearward using a metal bar underneath your ass. Like I said: no BS. 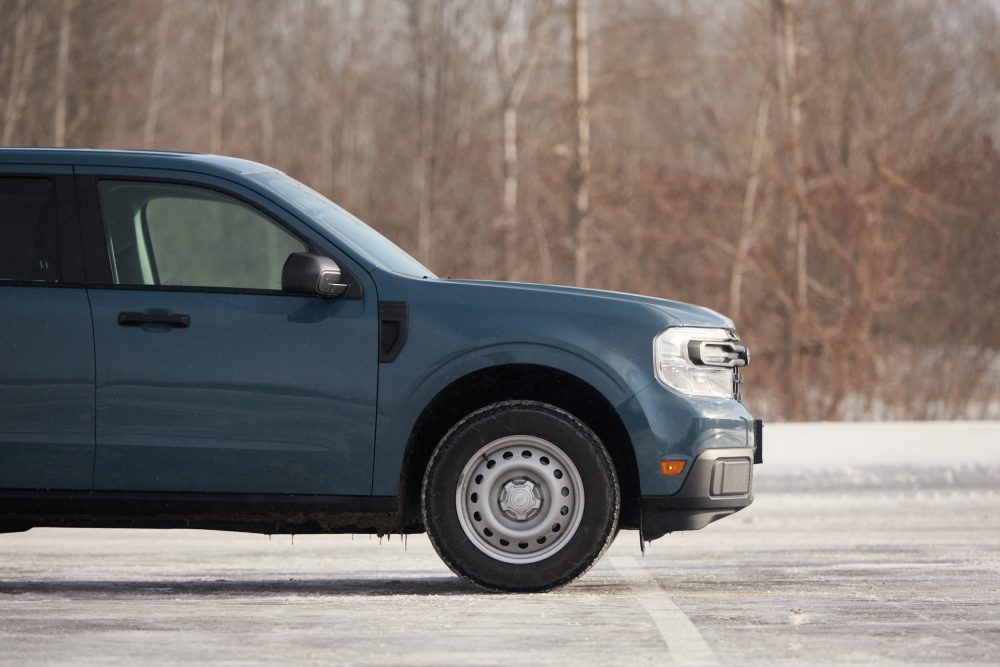 Fine, the Maverick XL’s base equipment is a little scarce. It could at least have heated seats. I had the thing during -35 degrees Celsius cold and my ass really didn’t appreciate that. But apart from these minor caveats, the Maverick’s bare bones attitude feels fantastic in a world where is everything is overengineered and expensive. 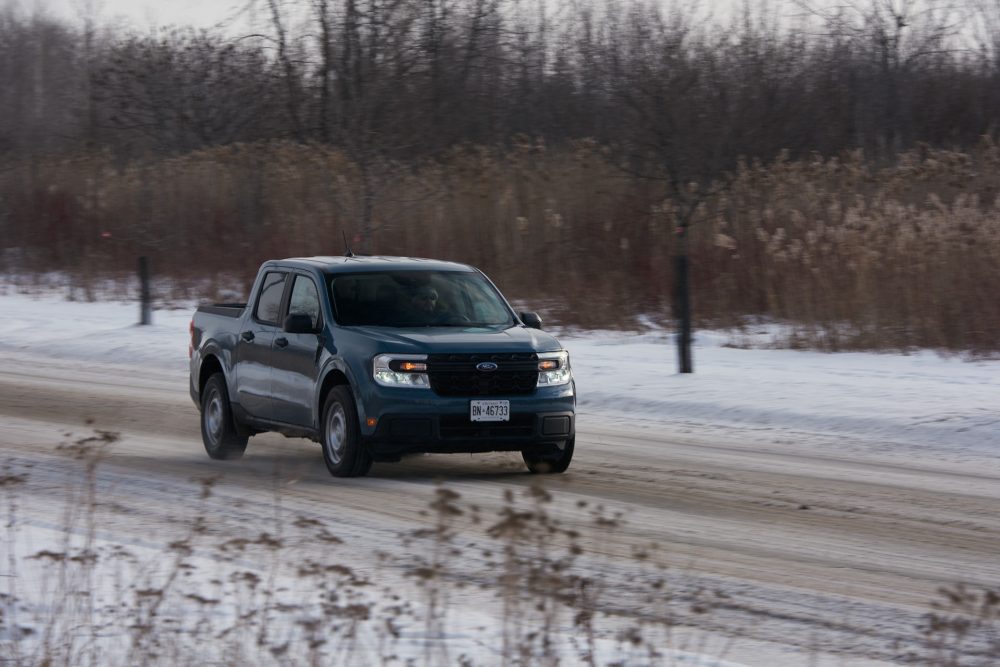 Approach the 2022 Ford Maverick for what it is – as an urban pickup truck – and you’ll absolutely adore it. The fact that it’s based on a car means that it drives just like a small car in the sense that it’s nimble, light on its feet and easy to park between the massive SUVs at the mall. 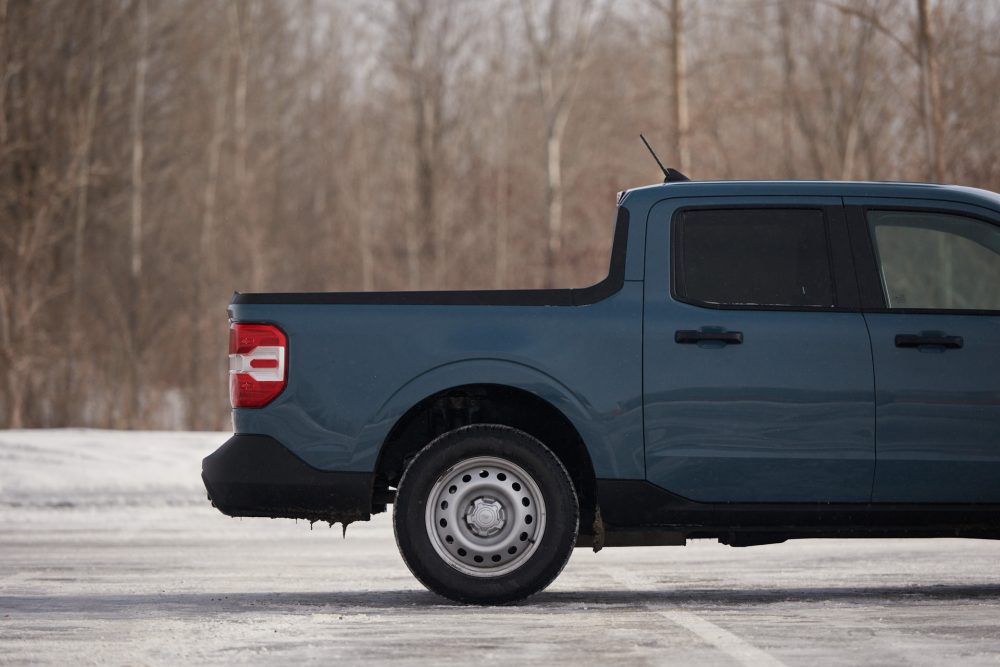 Power from the turbo engine is also more than ample, with spirited acceleration and a good dose of torque that kicks in way low in the rev range. That engine sounds like ass though, so pushing it won’t be much of an event. Setting it to Sport mode won’t improve things neither. The engine will just lament itself as if it wants to eject its way out of the engine compartment. Normal mode is fine in a Maverick. 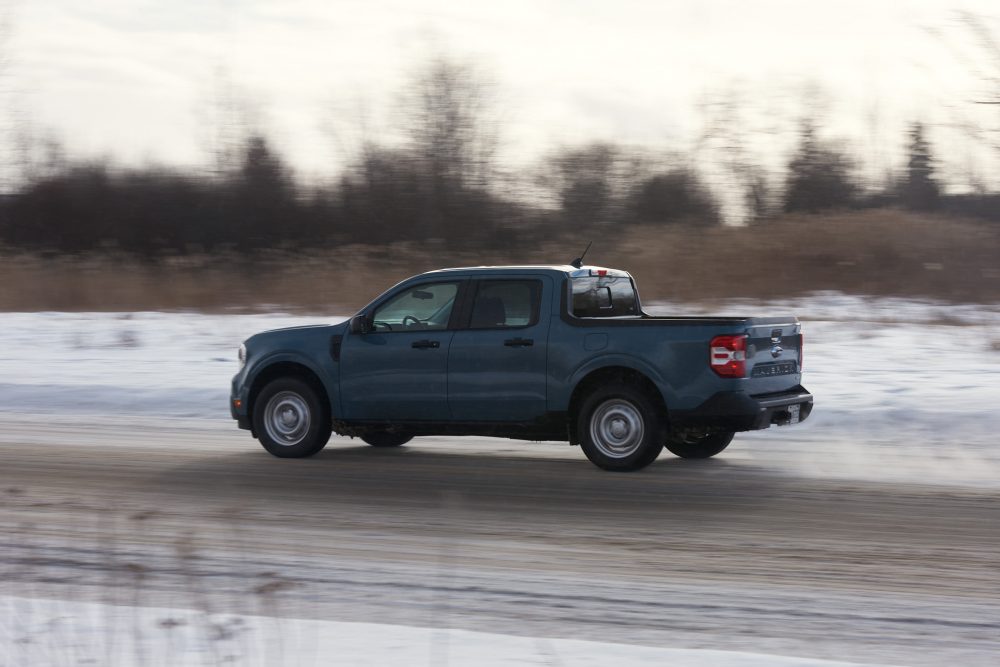 There’s also a bit of a problem with the way the suspension behaves. The Maverick is way too stiff on beaten roads and the dampers are way too overdamped, leading to a bouncy ride. 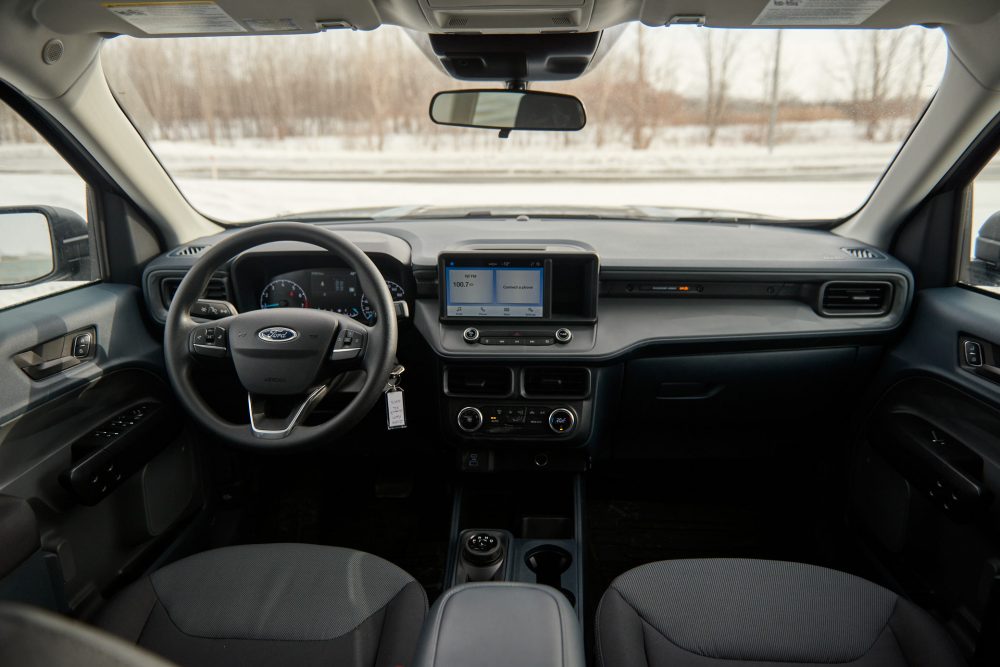 Inside, the Maverick is all utilitarian, although Ford did have a bit of fun with it through different color and material combinations. Mine had a more barebone blue finish, but higher trim levels get funky color themes. Material quality is only fine in a Maverick with an ok fit and finish. Let’s say it gets the job done. 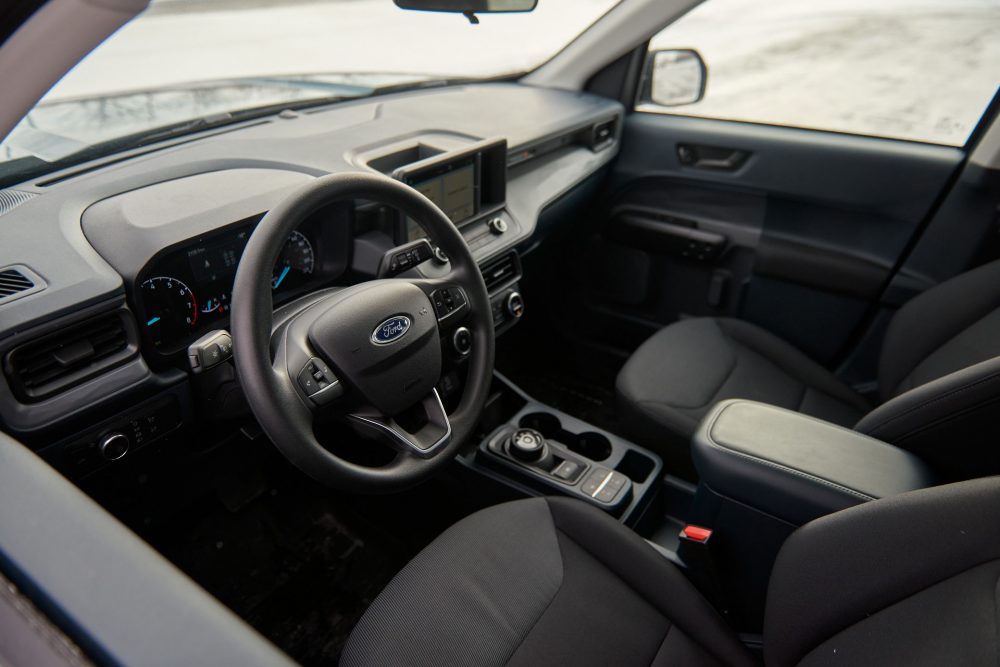 Seats are a bit hard, but never uncomfortable, and although rear legroom is a little tight, the fact that you sit upright in a Maverick leads to ample head room back there. 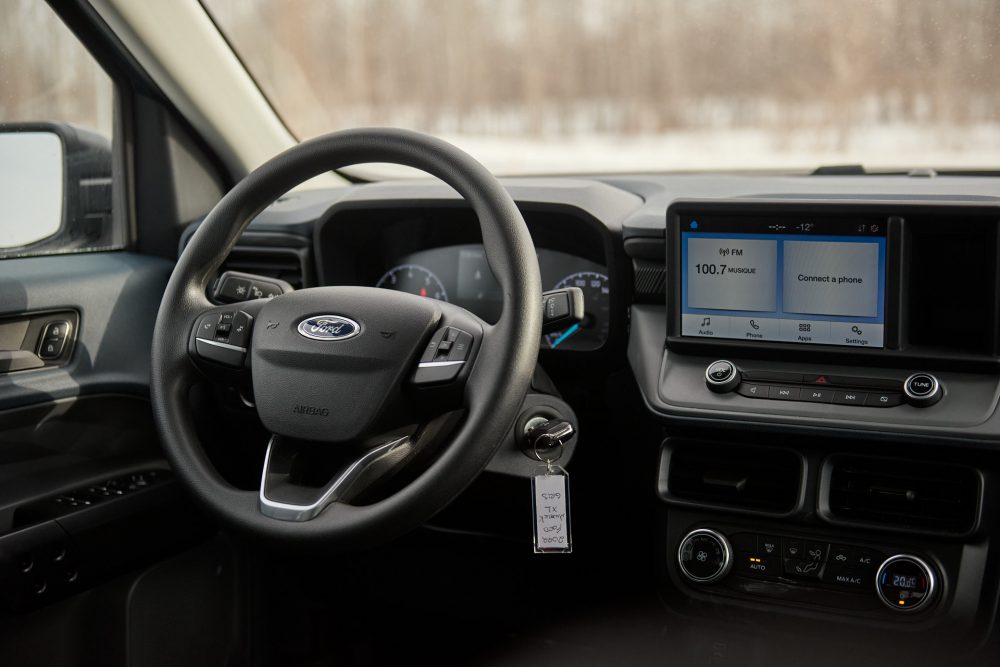 Generally speaking, overall ergonomics are great, with a simple, easy to operate infotainment system. There’s also a shitload of cubbies and storage areas to throw your junk. Simple pockets and shelves were scattered across the cabin for your phone and other apparatus. There’s also a massive storage compartment hidden underneath the rear seat. 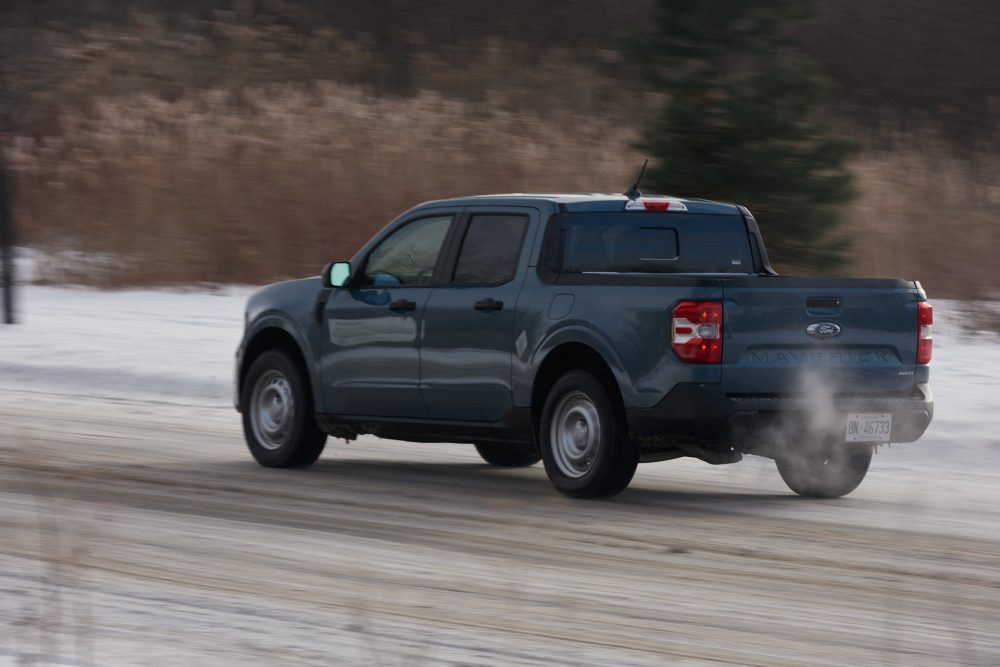 Listen, you may not agree with the 2022 Ford Maverick for being car-based and looking so goofy, but what you need to understand is that this vehicle may reopen the door to more affordable light pickup trucks like back in the day. Because you can be damn sure GM and Ram are checking this thing out and wishing they’d also have one in their showrooms. Plus, the Maverick is fun! What’s not to like?