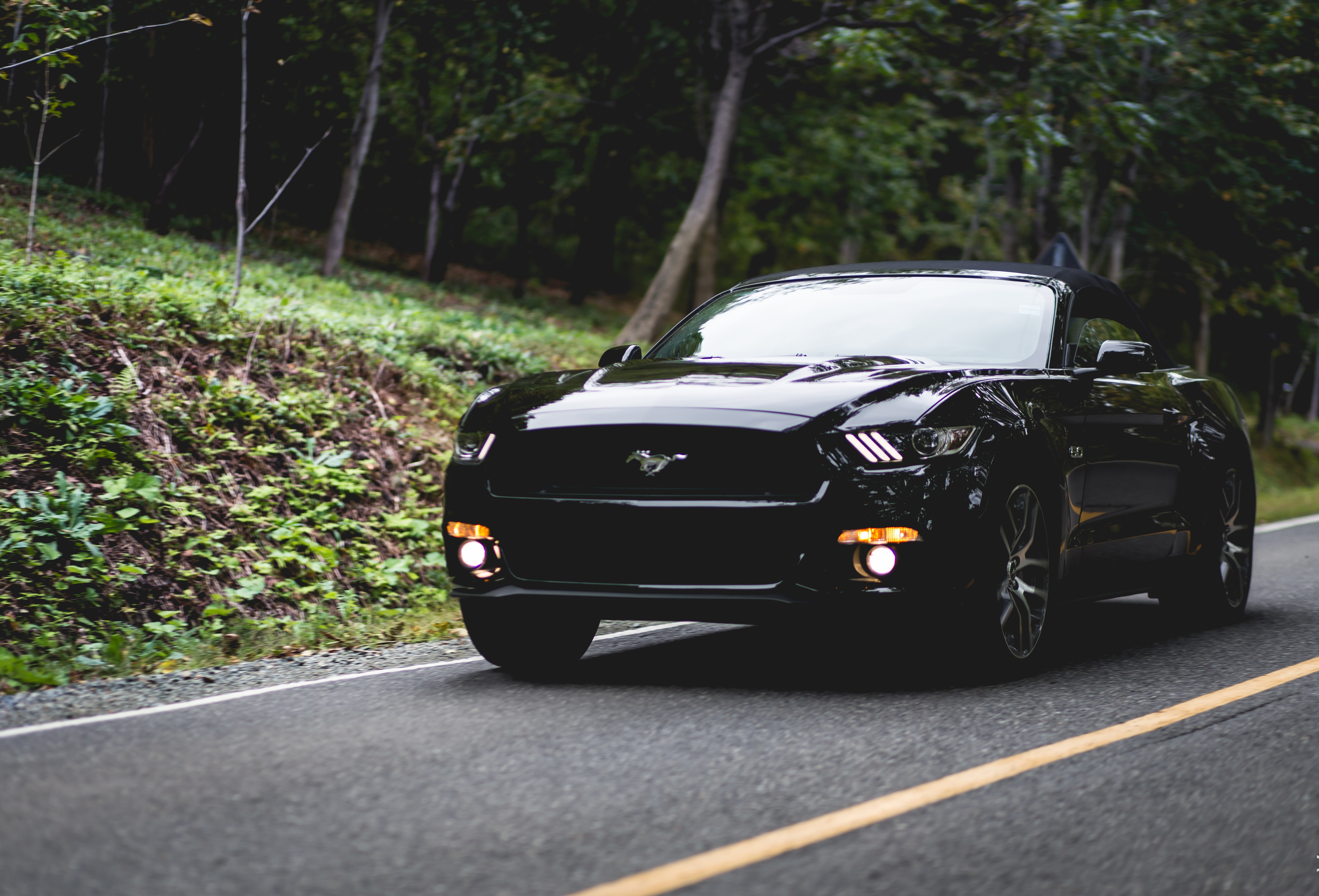 Yes, you all know this car. You’ve all seen one, sat in one, or even owned one. It’s a freakin Mustang, a legend, the star of movies, the emblem of an entire nation. And since we all know what this car is, we know exactly what to expect from it.

Until this one came out.

The 2016 Ford Mustang GT, with the 5.0 and the six-speed manual transmission, well it’s no longer a big old sloppy muscle car. It’s a genuine thoroughbred trained to near perfection; a hero for the middle class, and an astonishingly well sorted out sports car. 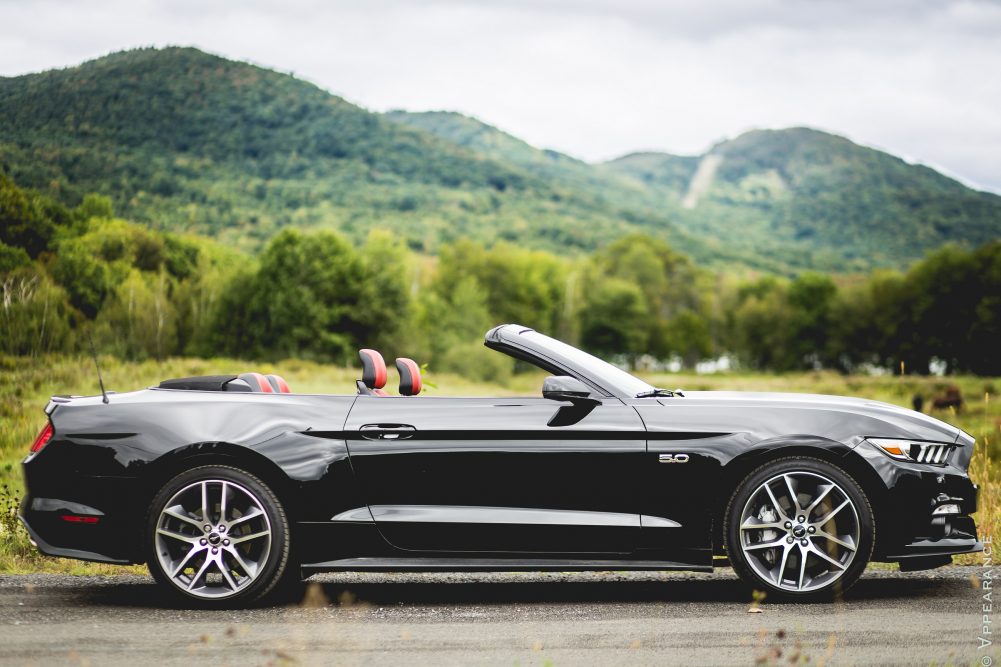 When you lay eyes on the new Mustang, it’s immediately recognizable as just that. It still has that long hood, a small, pushed back cabin, and sloping rear end (for the fastback). Yes, it’s still big, but unlike previous Mustangs, which leaned towards the tacky side with their fake hood scoops, this new one simply looks beautiful. That Aston Martin stolen inspired front end, “à la” Ford Fusion, mixed with classic Mustang design cues give it a stunning and modern presence on the road. They’ve also widened it, lowered the roof, and made the rear tires stick out of the fenders just a tad to give it a menacing stance. At the rear, the iconic three-bar taillights have been simplified and darkened thanks to a black bar that crosses the trunk. It all looks clean and elegant, nothing is overdone. 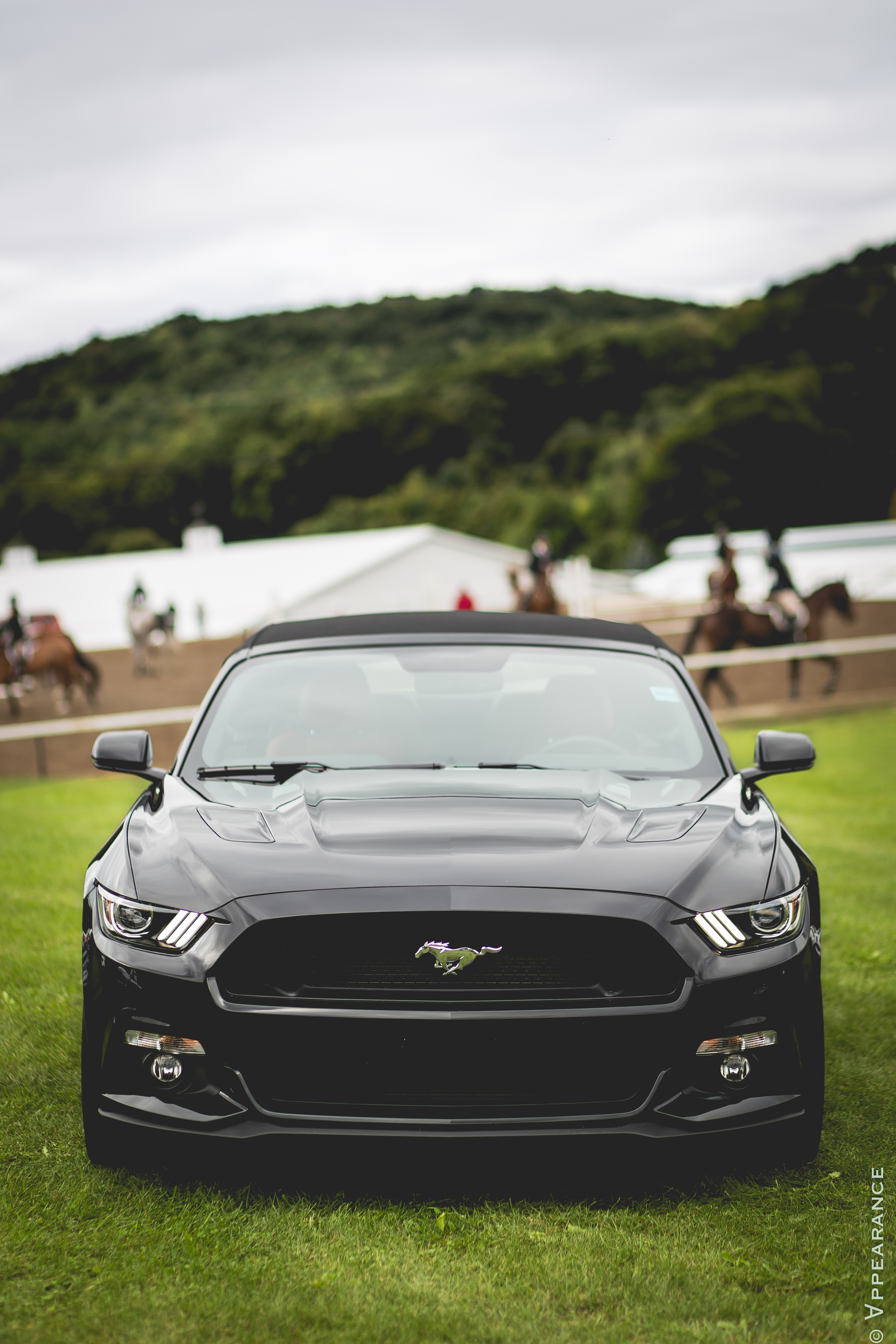 Inside, again, it feels like a Mustang. You’re sitting low, with a large hood sticking out the front, ruining forward visibility, with enormous, heavy doors on each side. You feel tiny in there, it’s hard to see out of it, and you’re intimidated by the sheer size and mass of the thing.

You then notice that everything is well placed, that the seats are actually comfortable, the pedals are perfectly positioned, and that the materials look and feel like something usually found in much more expensive offerings. Everything that looks like aluminum actually is, and there’s a sense that the people at Ford worked really hard to make the interior a truly pleasant place to be.

Most refreshing for a Mustang is a dashboard that finally doesn’t look like a block of plastic that melted in the microwave. 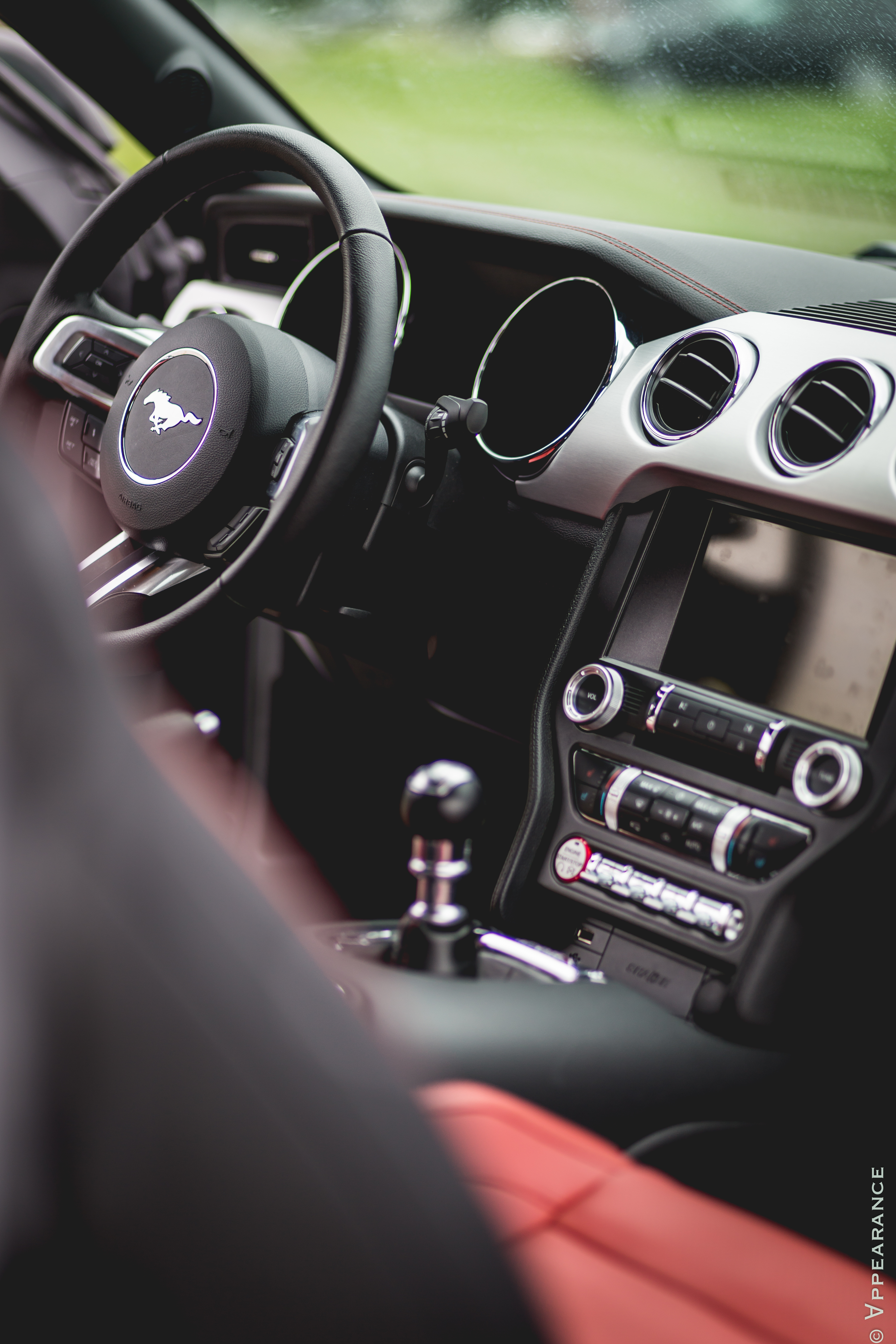 Ford wanted to make the driver feel like in a P-51 Mustang fighter plane from World War II, which explains the round air vents placed inside a slab of aluminum that crosses the dash. It looks fresh and industrial. And there’s an array of seriously cool details in there, from the “Mustang Since 1964” patch on the passenger airbag cover, to the aircraft-inspired “Ground Speed” and “Revolutions per Minute” letters written on the speedometer and rpm gauges. It’s all rather well executed. 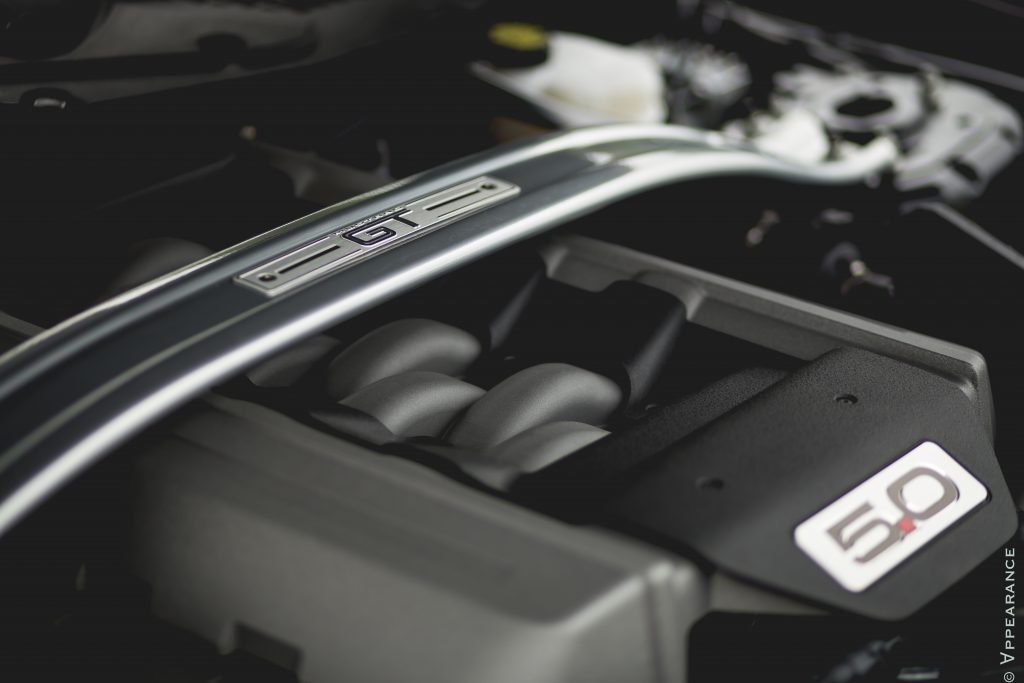 Ford offers a choice of three engines for the new Mustang.

We’ll get back on the Ecoboost soon in an upcoming test drive, so stay tuned. 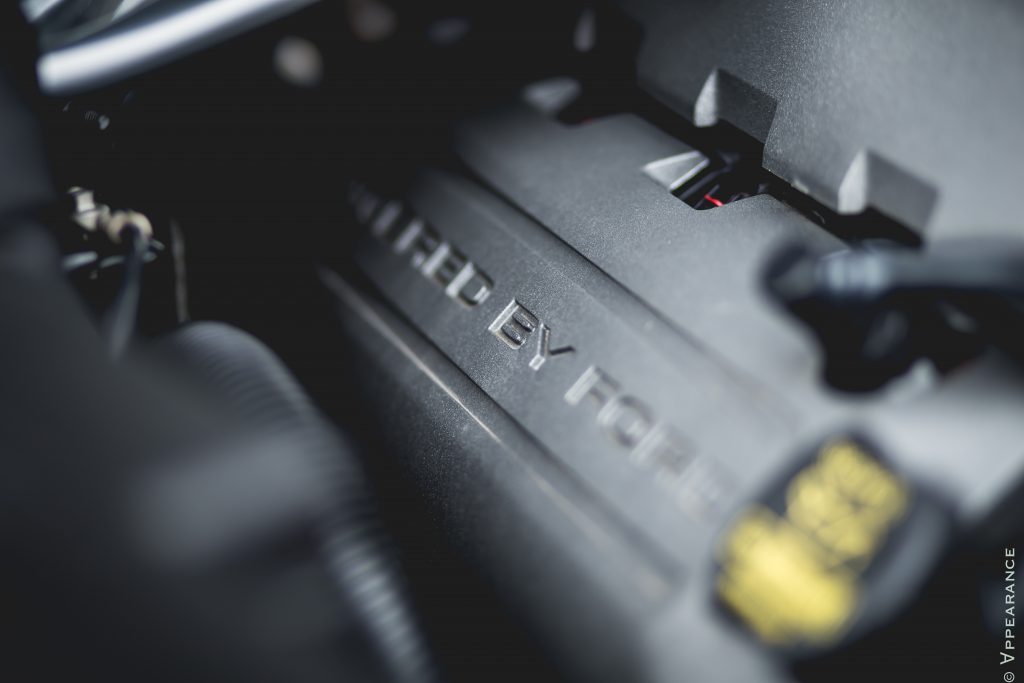 But it’s this GT that really defines the breed. It’s the top trim level of Mustangs (before Shelby) and it gets, thank sweet baby Jesus, a good old 302 cubic-inch, 5-liter, dual overhead cam, 32-valve, coyote V8.

And what an engine.

At 435 hp and 400 lb/ft of torque, it’s basically a slightly detuned version of the one found in the previous generation’s Boss 302, a sophisticated, high-revving, track-bred power plant. There’s power everywhere. It’s a torque monster. It revs like a four cylinder, and sounds ungodly. More quiet and refined than past Mustangs, but yeah, ungodly.

Starting price for a GT is $35,717, and climbs up close to $45,441 for a fully loaded Premium one such as this convertible tester I had with all the possible tech added inside like blind spot monitoring, adaptive cruise control, and the Shaker sound system. 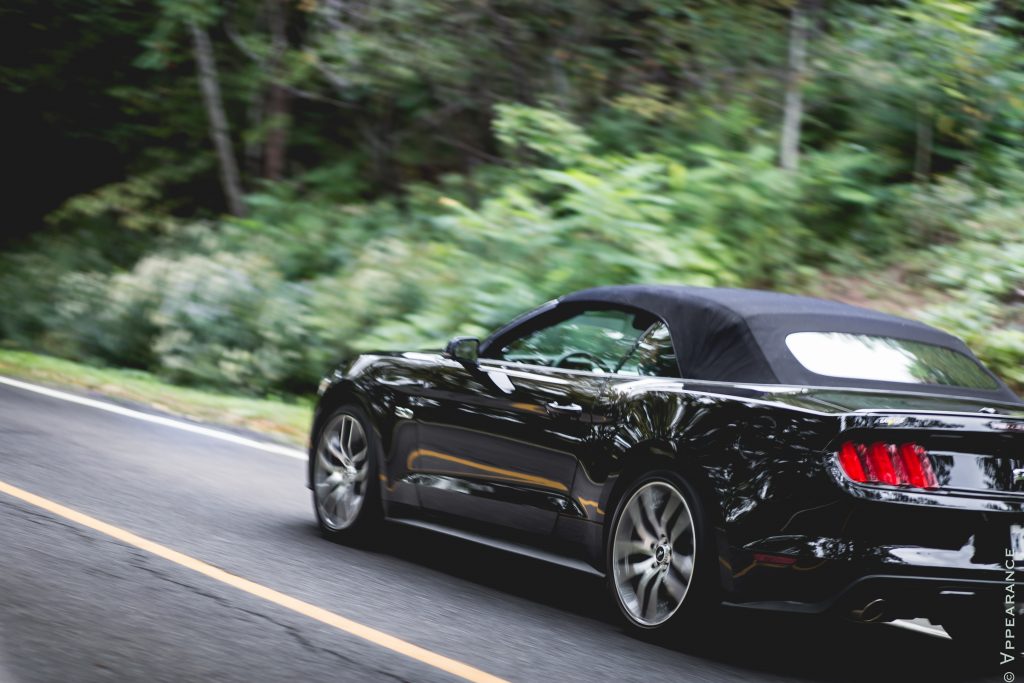 Boy does this thing fly.

Motor Trend magazine has clocked a Mustang GT from 0 to 60 mph in 4.4 seconds, with a quarter mile time of 12.8 seconds at 112.2 mph. Put it in Track mode, switch all systems off, activate the launch control, and the GT will catapult itself like bullet, gaining speed like a train out of hell. First and second gears are gone in a flash. In no time, you’re already travelling at triple digit speeds. 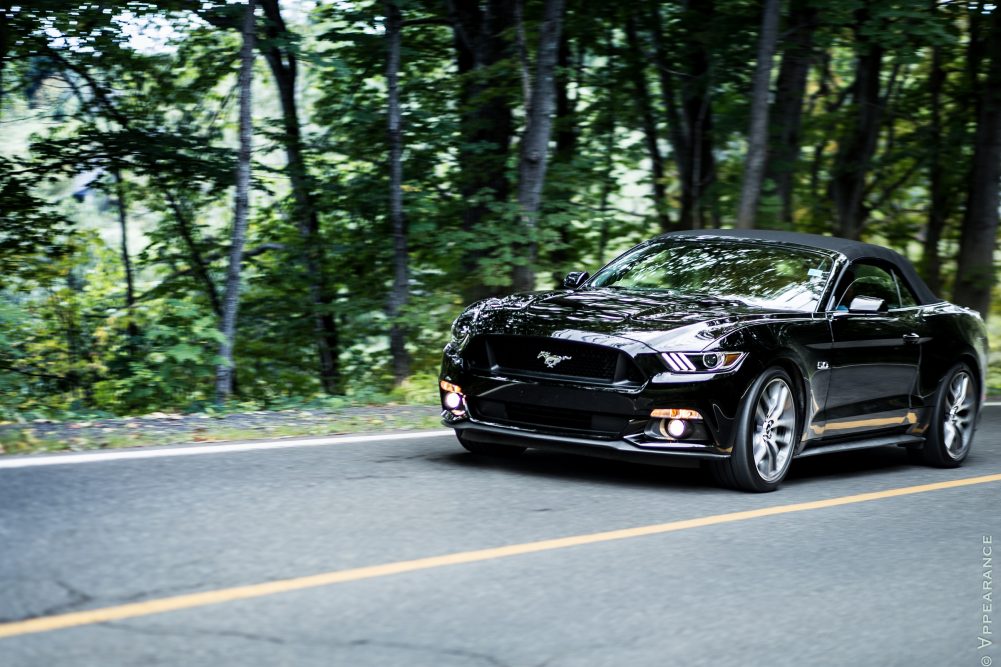 That 5.0 is sublime, smooth, refined, and respectfully shoves you into your seat when commanded to do so. In every day casual driving, it trots around town with very little drama, drinking no more fuel than a V6 Honda Accord (9.4 L/100 km average). You can upshift it two extra gears and it won’t even raise an eyebrow. It’s a big old boy this car; one you’ll want on your rugby team and give a big hug to after winning the game. 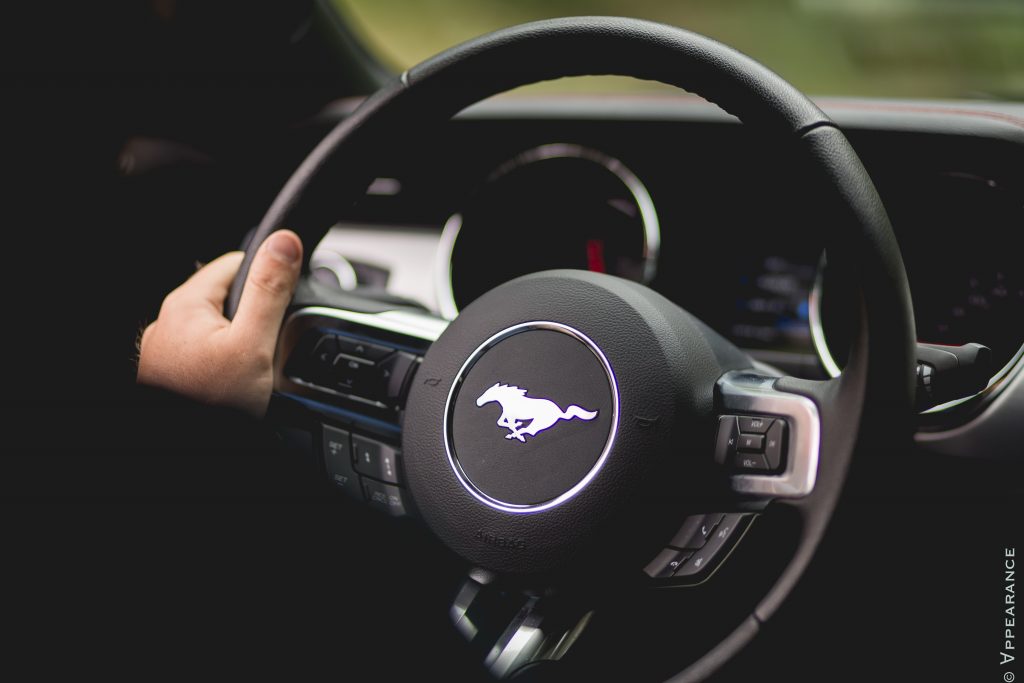 The 6-speed, Tremec-based, manual transmission is perfect. Gearshifts are short; shift action is precise and mechanical. Clutch take up is exactly where you’d expect it to be and the bite is firm. You just can’t be too rough with it, it just wraps it up, every single time.

You get a sense that everything about the new Mustang was built to be indestructible, it feels solid, and impressively well put together, encouraging you to become a hooligan each time you get behind the wheel. 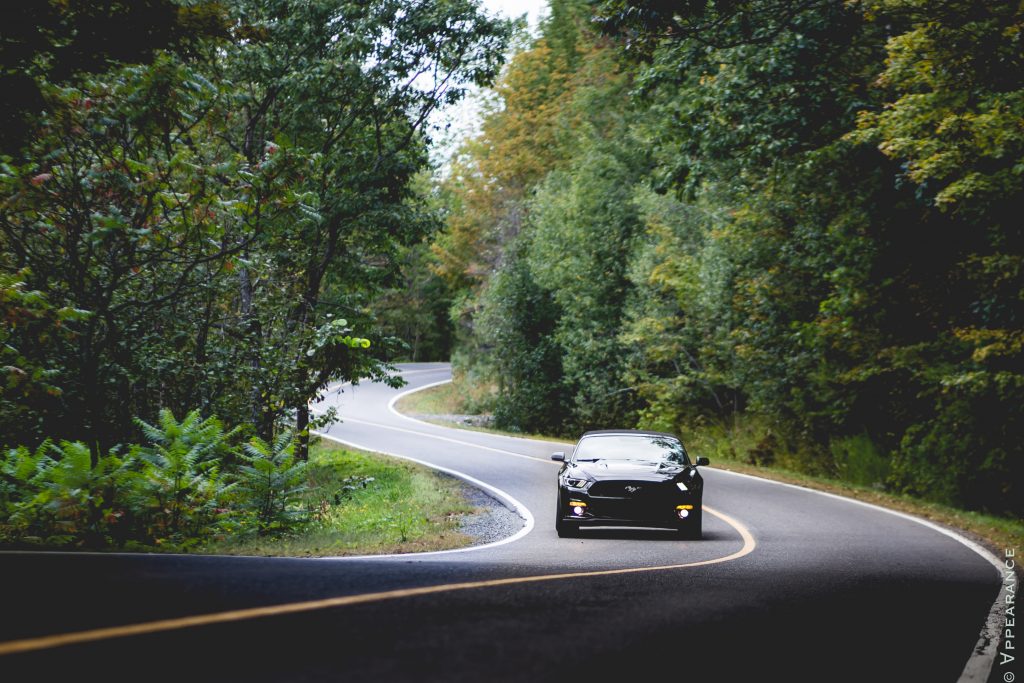 The Mustang finally gets an independent rear suspension, which means it no longer handles like the rear end is going to split in half every time you enter a corner. Granted, many will argue that the charm of past Mustangs lied in the lively, almost scary, handling characteristics that resulted from its rear live axle. For many Mustang enthusiasts, fitting this car with an independent rear has softened it up. 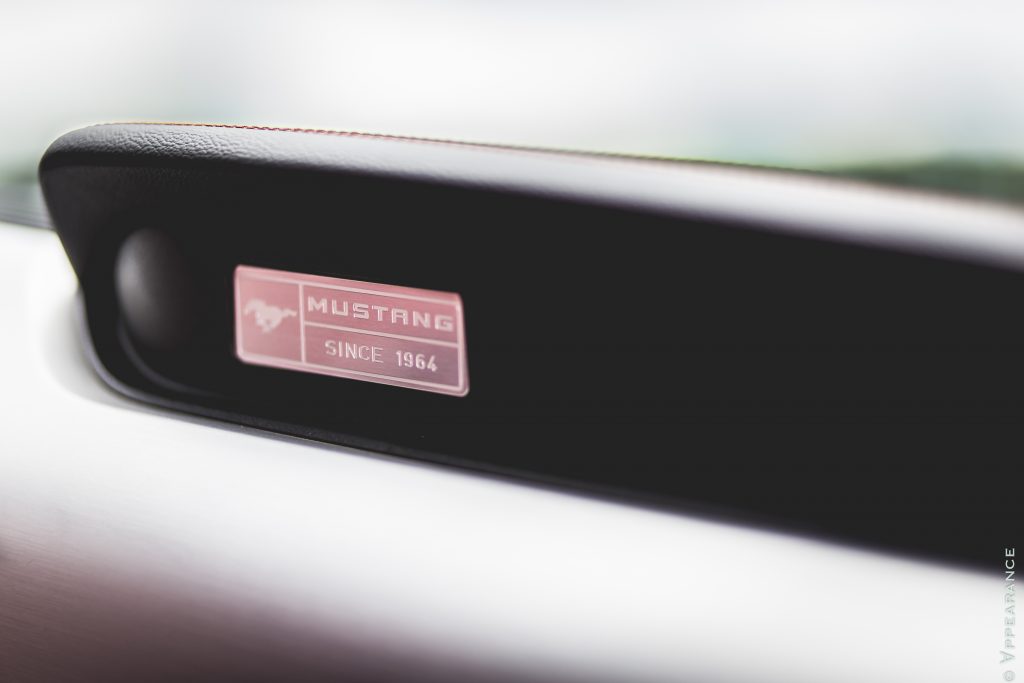 The new Mustang isn’t softened, it’s refined, keeping up with the times, and ready for the future. Hell, it’s about time.

Ford has done an exquisite job of tuning the chassis dynamics. Yes, the GT’s hype may be about its engine, but this new chassis is truly superb. The rear finally speaks to the front, and everything is so harmoniously combined. Yes, when driving at low speeds, you still get that somewhat heavy, wobbly feeling you used to get from older models. In the convertible, you still feel the whole thing flex undesirably when hitting cracks and bumps, and the overall first impression is that this is still an unrefined old brute of a thing.

Until you start giving it the Mickey. 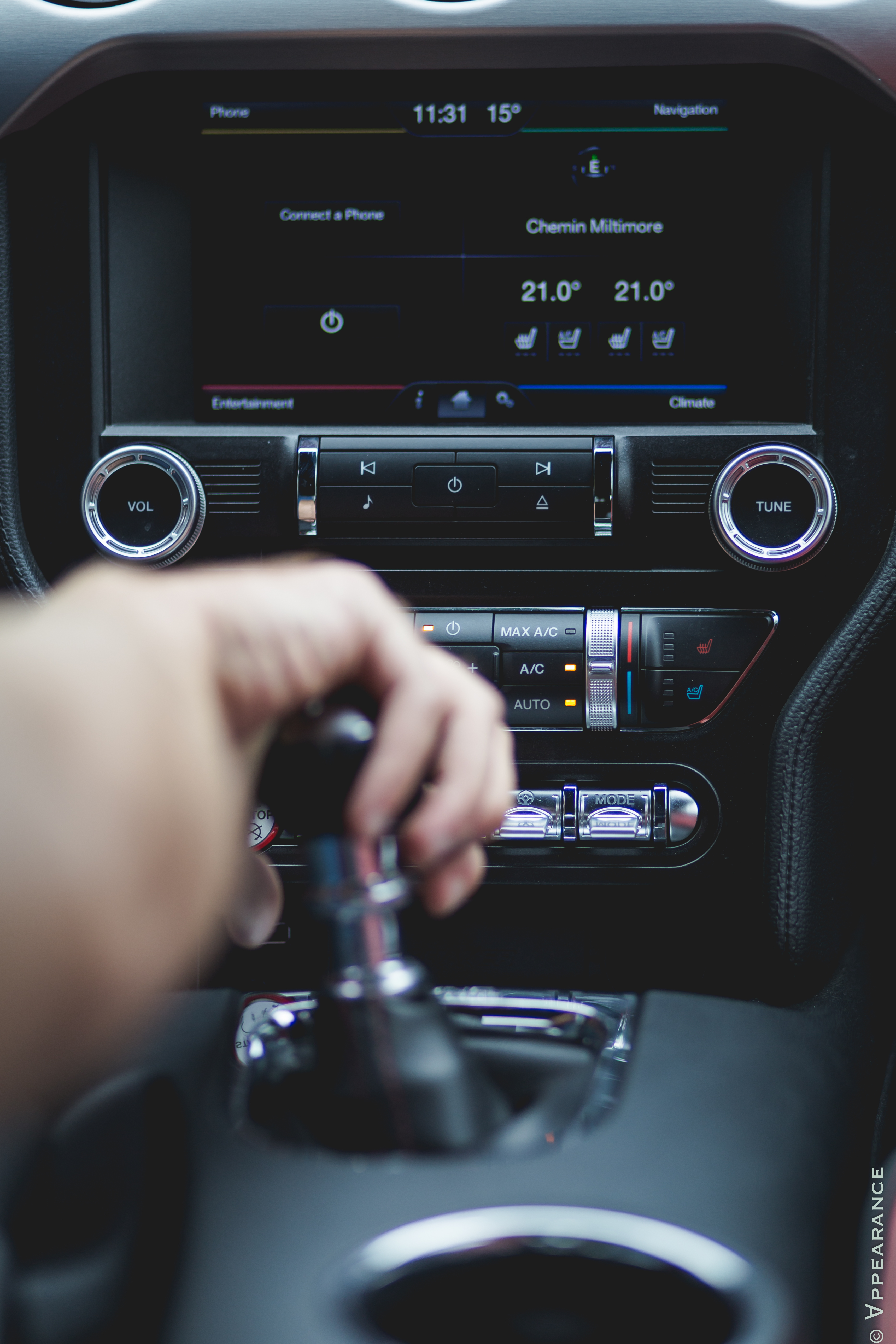 It feels like Ford did on purpose to make their new Mustang rough around the edges. Because when you start digging past the first layers of wobbly and unrefined, you end up with a stellar sports car that can trade punches with the best of them. Somehow, under hard driving, the Mustang suddenly transforms into something almost as focused as some German offerings (BMW M3). The faster you go, the smaller it feels. The electric power steering, adjustable through three different settings (normal, sport, and comfort) communicates clearly what the front wheels are doing, it’s alive, and reacts with urgency at each driver input.

Corner exits are now perfectly controllable, thanks to a rear end that puts the power down in a civilized and efficient manner. Everything seems to have been maximized for optimum performance results. Get that rear to slide out, because oh yes, you can still throw it around, and each power slide is perfectly controllable. In fact, the Mustang invites you to push its limits, makes them easily accessible, and gives you all the tools to play with them in total confidence.

And thanks to Ford’s ingenious Track Apps feature, drivers now have access to an array of telemetry guizmos such as a 0-100 and lap time chrono, a G-force meter, an accelerometer and a ridiculous, but seriously cool “tire warm-up” option which basically assists the driver in creating the perfect burnout.

Shut Up And Take My Money 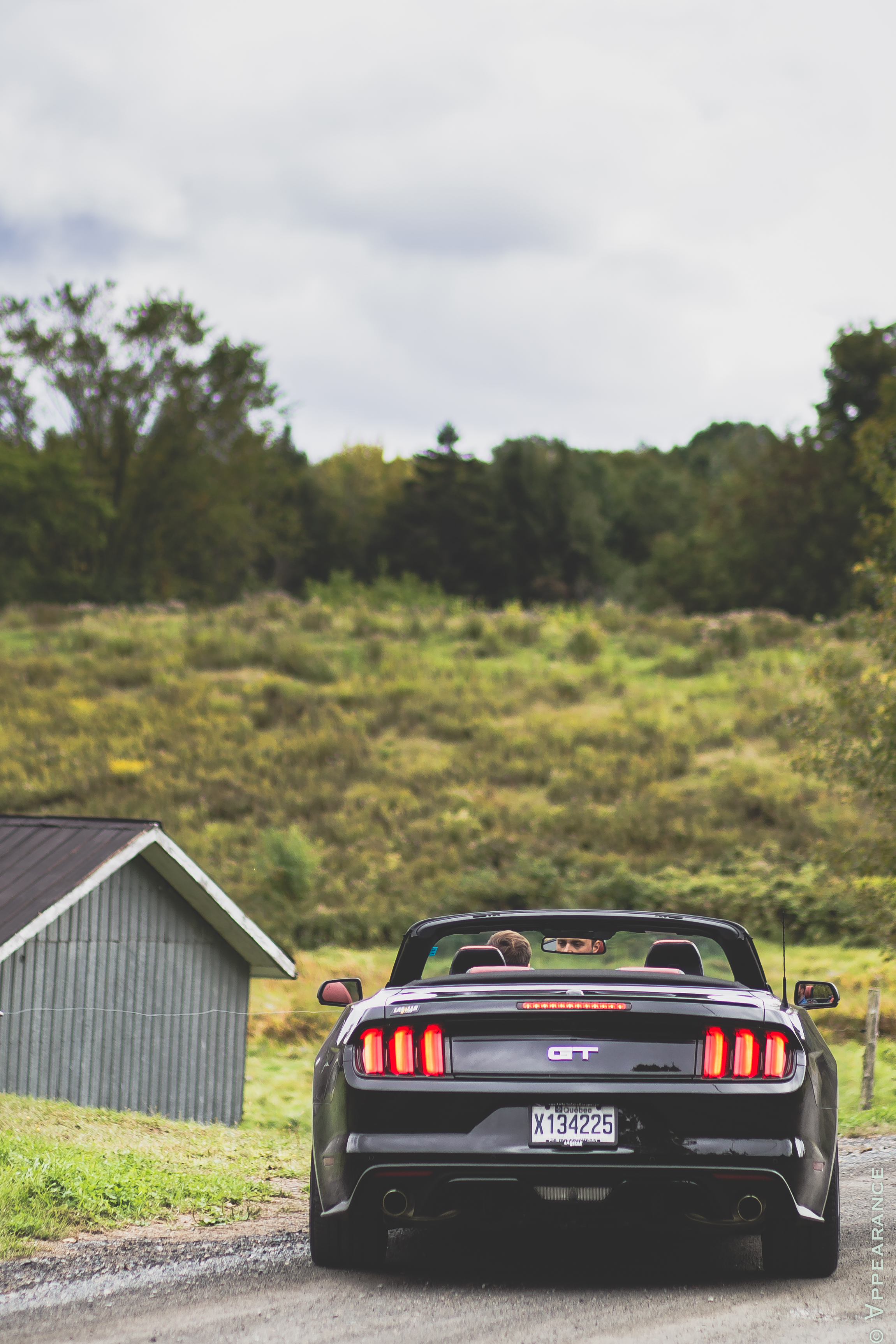 In the $40,000 price range, there aren’t many cars that will give you this kind of thrill and performance. Yes, there’s the Chevrolet Camaro, but somehow, in my book at least, it doesn’t evoke the same kind of hype as the Mustang’s legacy.

Ford have certainly done a great job at modernizing their pony car. I don’t really see anything wrong with this car. Apart from the fact that it’s big, and feels that way when parking it. Oh and there’s a horse that lights up on the ground when you open the door at night. Yes, a horse. And the cupholders also light up in bright red. And the rear blinkers flash in a 1-2-3 sequence like back in the sixties.

And that’s all kind of tacky.

But apart from that, the new Mustang manages to improve on everything we didn’t like about the nameplate while keeping all the things we loved about it exactly the way they were.

Indeed, the five-o lives, and it’s better than ever. In the everyday world, it’s quiet and civilized. On the track, it’ll embarrass cars costing almost twice as much. It’s the ultimate underdog, a big’ol American footballer, and I absolutely love it.

Review of the 2016 Ford Mustang GT by William Clavey

+
+ Well sorted out chassis and suspension.
+ Beautiful interior with quality materials.
+ V8 offers plenty of power without ruining you at the pump.

–
– Rough around the edges.
– Big and cumbersome.
– Some tacky features such as illuminated horse on the ground.