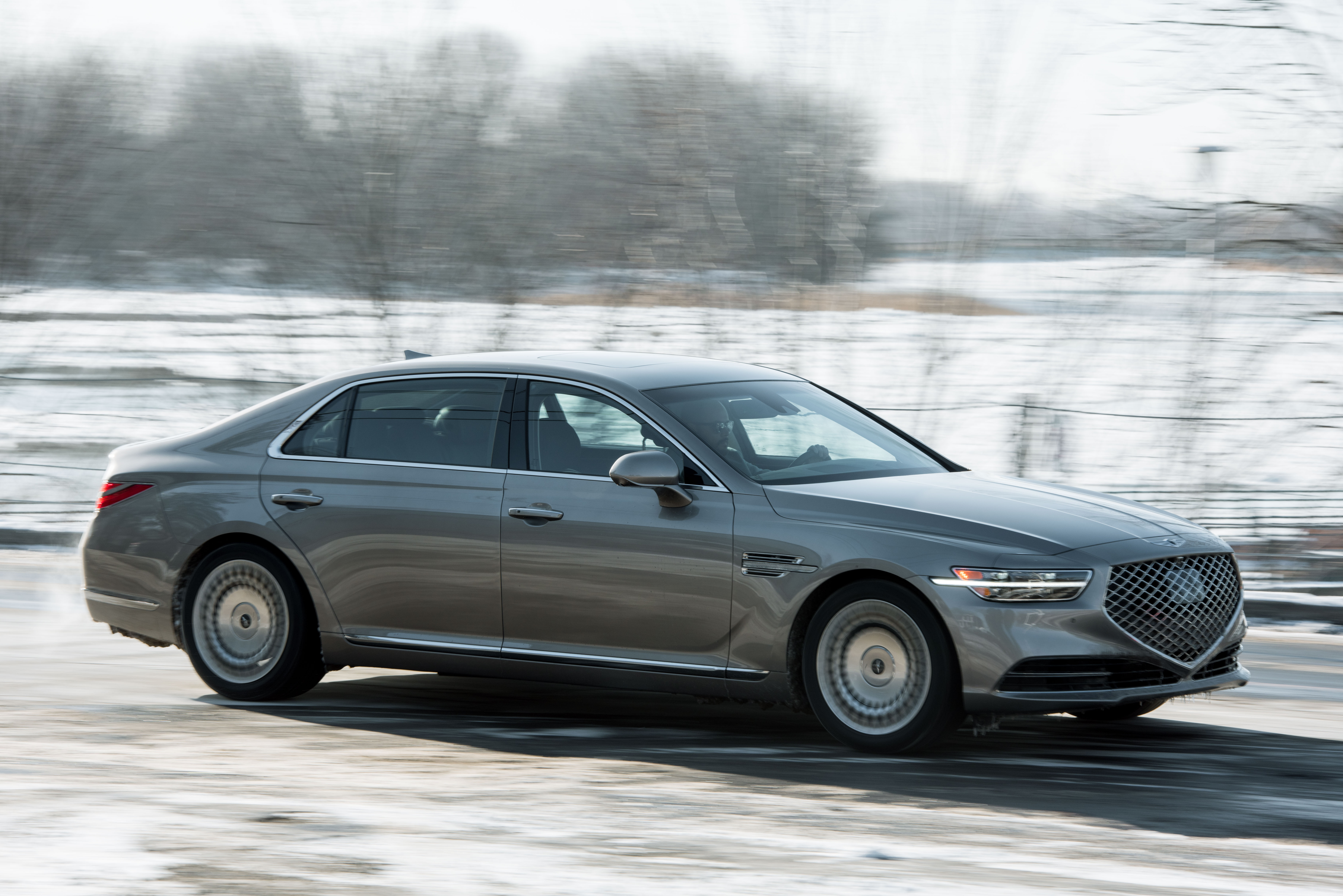 The 2020 Genesis G90 is a wonderful fullsize luxury sedan, but is it better than a BMW 7-Series or a Mercedes-Benz S-Class? Perhaps the more appropriate question should be: does it have to be?

When the rich and presumably famous shop for a massaging living room on wheels, is value even on their list of priorities? Curious to understand if Genesis even has a chance at taking on the finest fat sedans currently on sale, I took Korea’s most opulent automobile out for a spin. 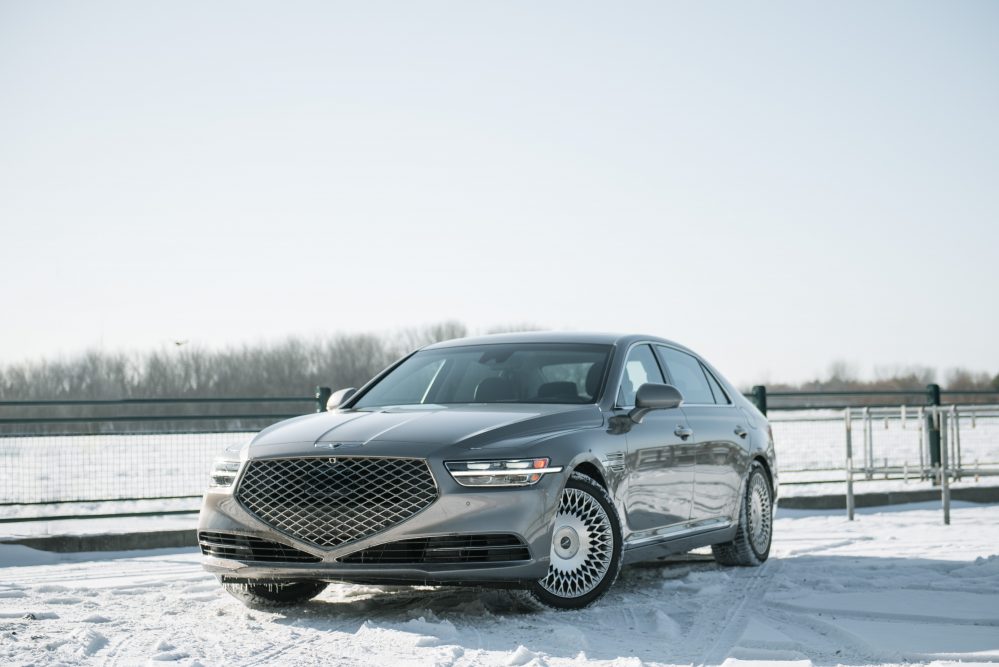 While the 2020 Genesis G90 appears to be all new, it’s actually a heavily overhauled facelift. Genesis does however claim to have changed every body panel on the car except for the roof and doors.

It sure looks the part, much more eye-catching than the last-generation model which did very little to convince luxury car buyers that it was… an actual luxury car. This time, however, the G90 speaks business, but in a much more bespoke styling direction than anything else in this class. 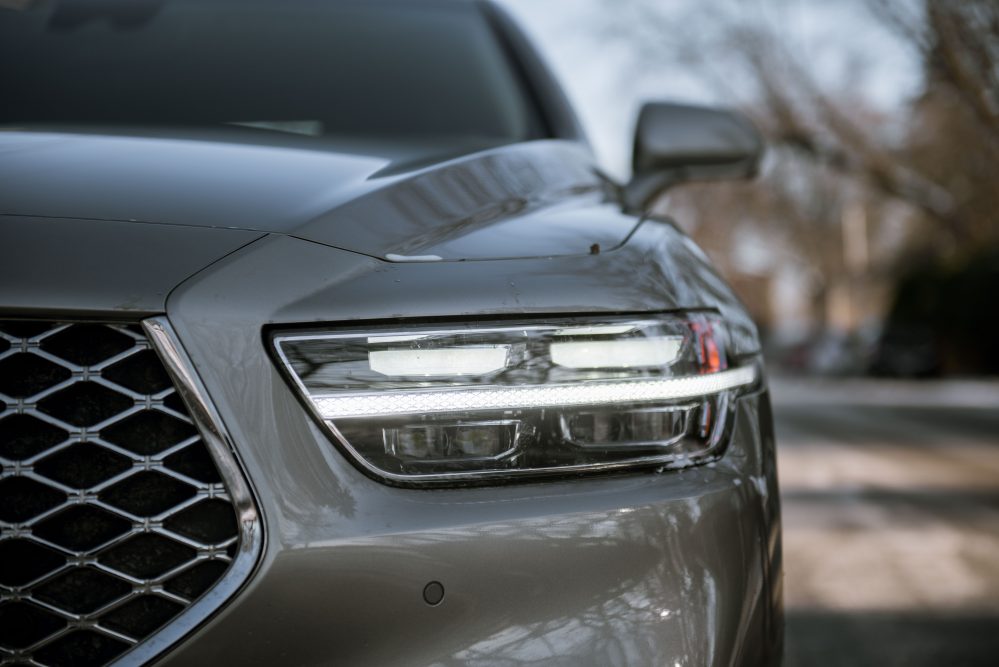 I’m a personal fan of those 19-inch wheels, which appear to be one solid piece of aluminium. The front grille is not only massive, but seems to have been carved out of a whole diamond, while the rear end is properly tapered, housing some of the coolest LED taillights I’ve ever seen fitted onto a production automobile. It’s a good-looking car, one that makes a Lincoln Continental appear rather lame by comparison. 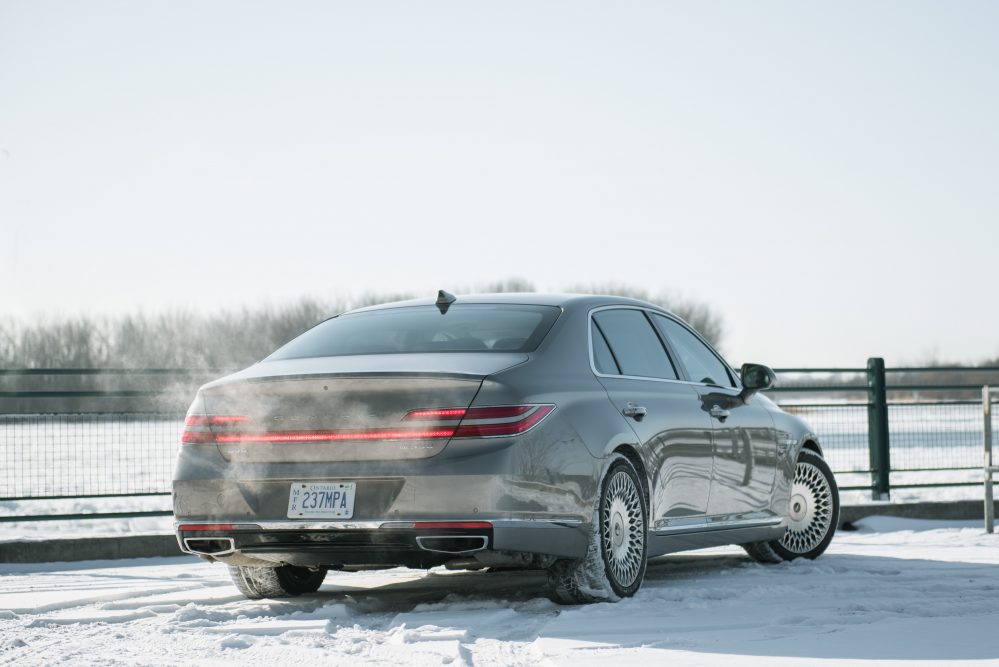 But the most important standout feature about the way the G90 looks is the fact that it actually appears to be expensive, a very important quality if you’re trying to steal some sales from the European elite. 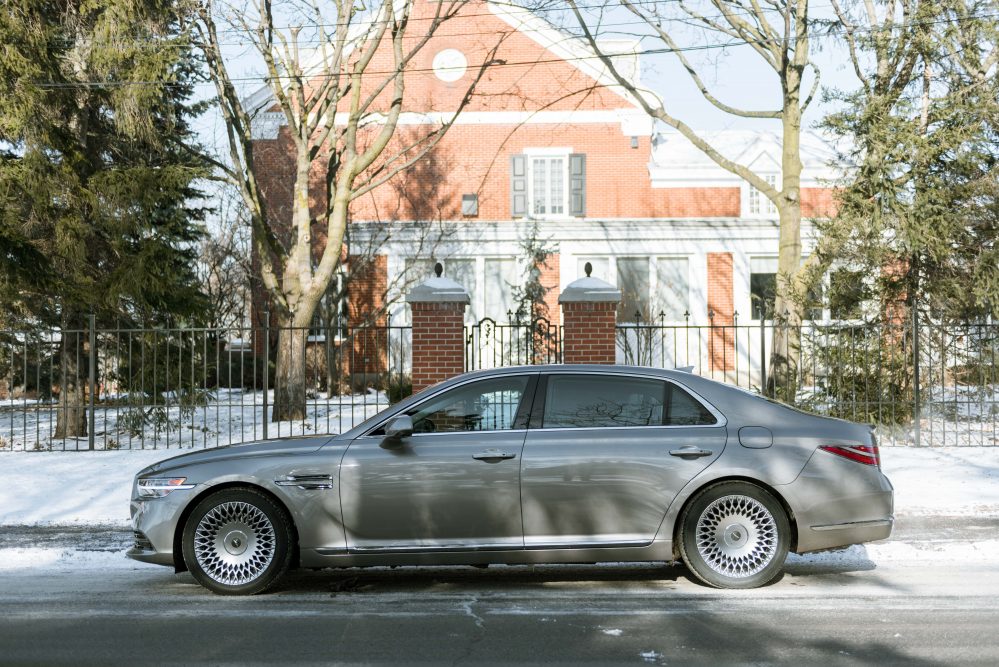 Canadian market G90’s come in only one spec. Power comes from a naturally aspirated 5.0-liter V8 good for 420 horsepower and 383 lb-ft of torque and mated to a rather responsive eight-speed automatic gearbox. All-wheel-drive is also standard up here, contrary to our American friends who can get one with rear-wheel-drive and a 3.3-liter twin-turbo V6 as well. 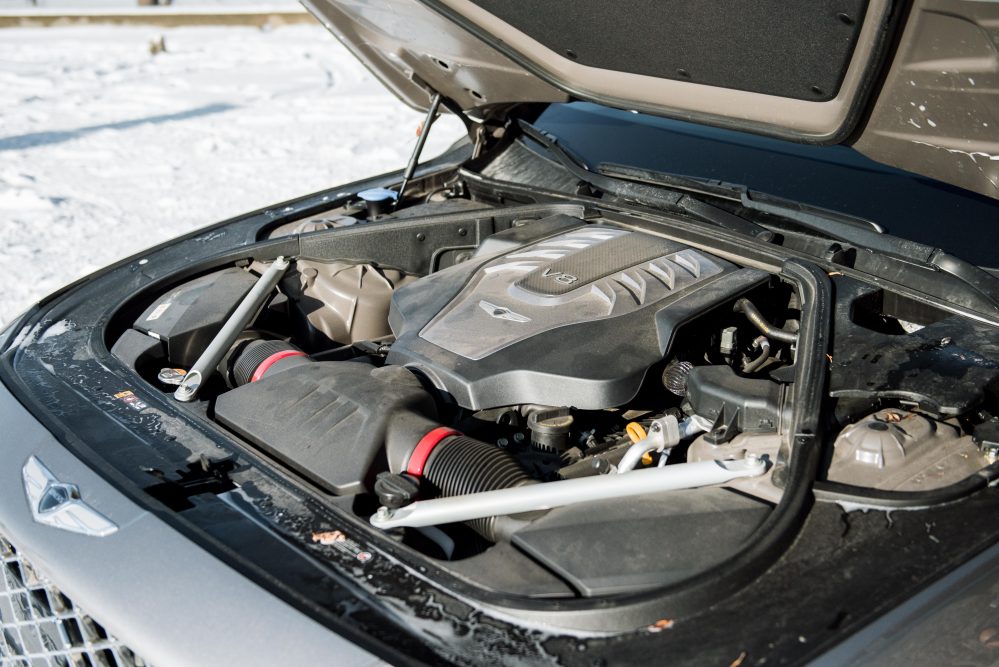 The 2020 Genesis G90 also comes as is, in one, fully loaded trim level called Prestige, something the German brands could only wish of having. The car you see here stickers for $89,750 all-in which undercuts both a 7 Series and an S-Class with similar equipment by several thousand dollars. 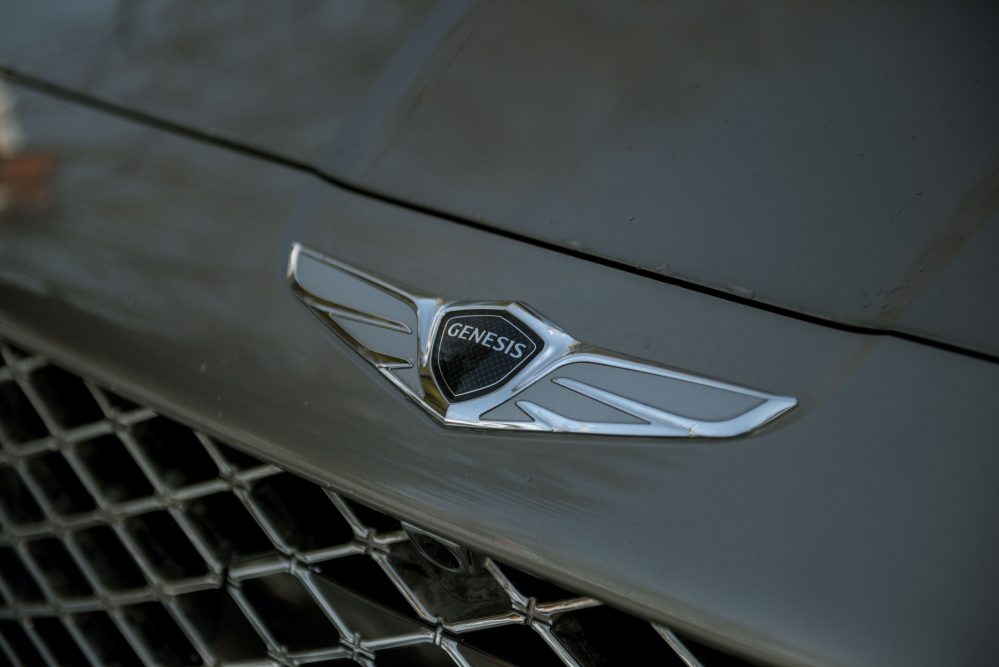 It is however possible to crank things up a notch by ticking off the “With Rear” option, which adds a rear seat entertainment system with dual 10.3-inch high definition displays. That one sells for $92,250. 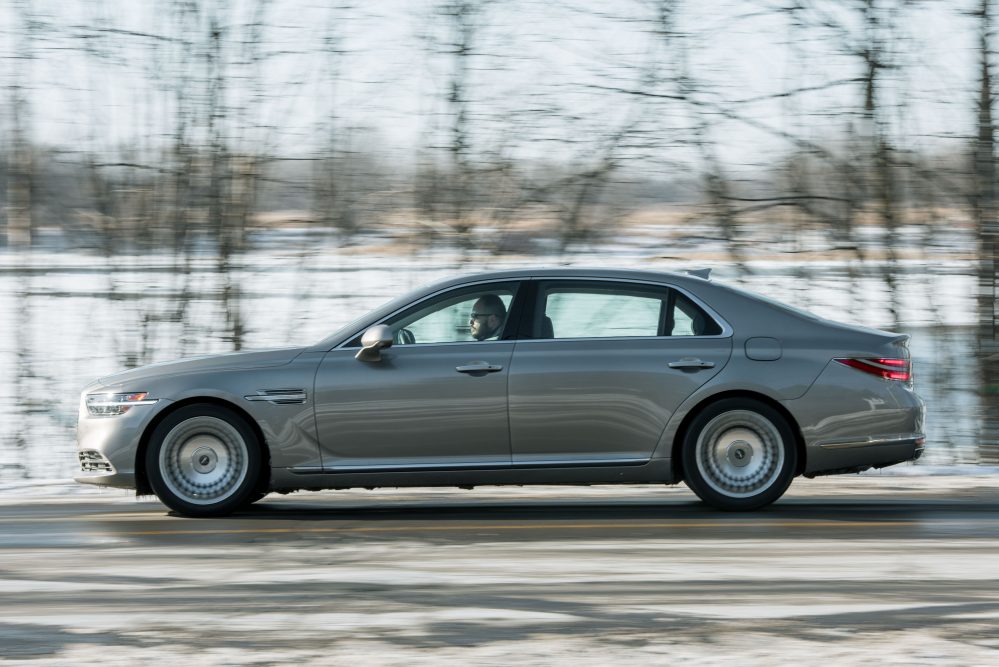 It was interesting to sit behind the wheel of this Genesis immediately after driving the BMW 750Li. And in all fairness, I was expecting to feel a drop in quality and craftsmanship when sitting in the overpriced Hyundai. Yet, I didn’t. 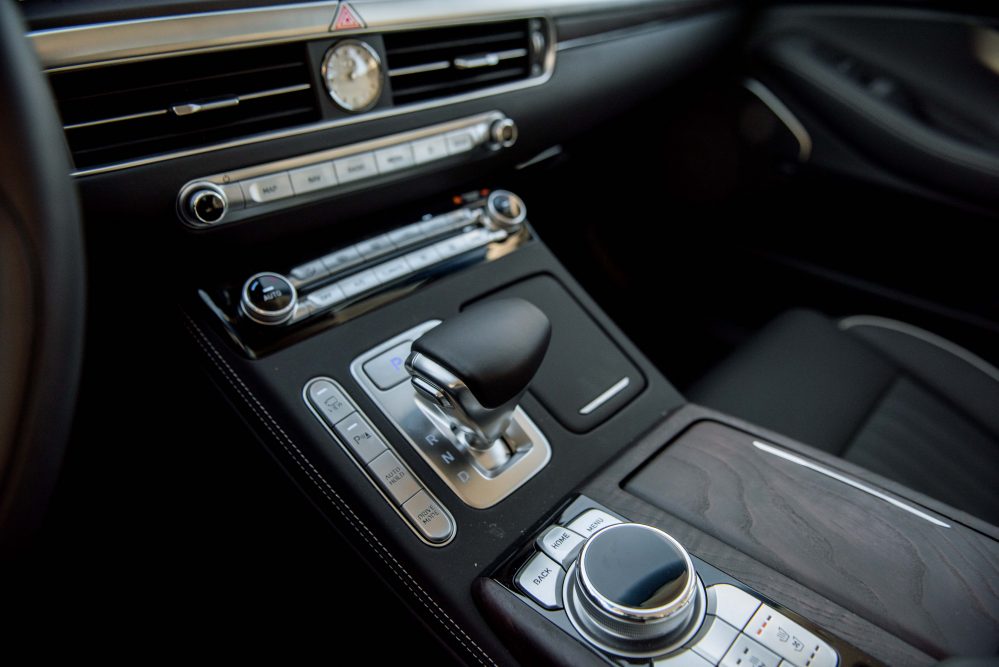 As a matter of fact, the G90 does certain things better than its main German rival. It’s simpler, which ironically feels good in this category of cars.

That said, don’t expect the G90 to be a better overall car than a 7 Series, because it’s not. But it’s also not sold at the same price point. Hence, its levels of refinement and luxury sit somewhere between a Volvo S90 and an entry level S-Class.  What the G90 does better than most, though, is remain butter smooth and vault-silent. That, it does frankly well. 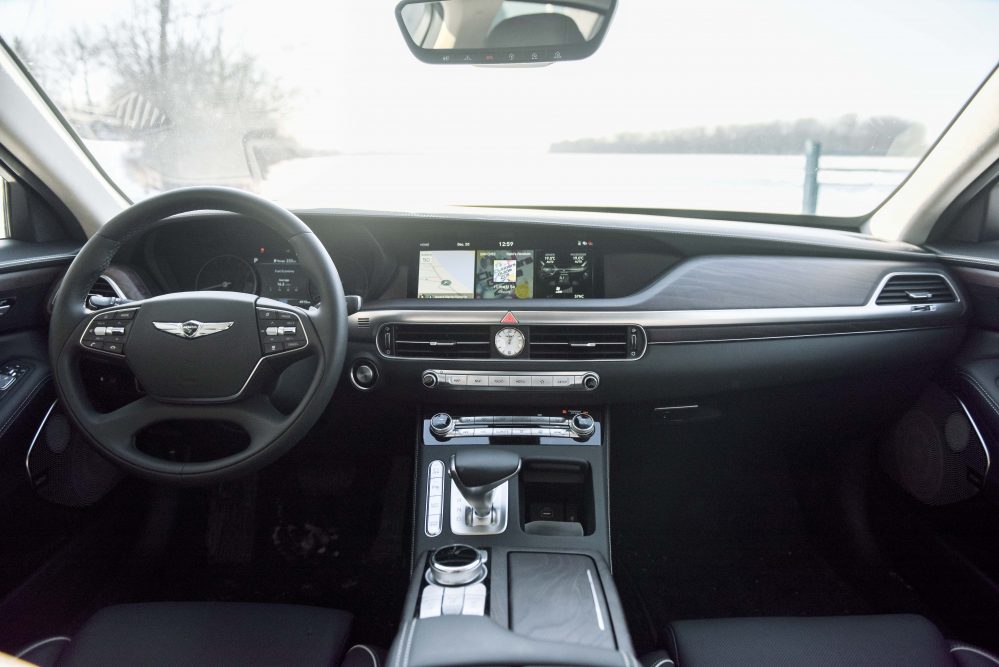 Inside, however, things remain much more conservative than the car’s styling. That’s when you notice this is not an entirely new car, but a heavily updated one instead. The G90 simply feels like it’s from another generation, comparable to big German sedans from a decade ago. 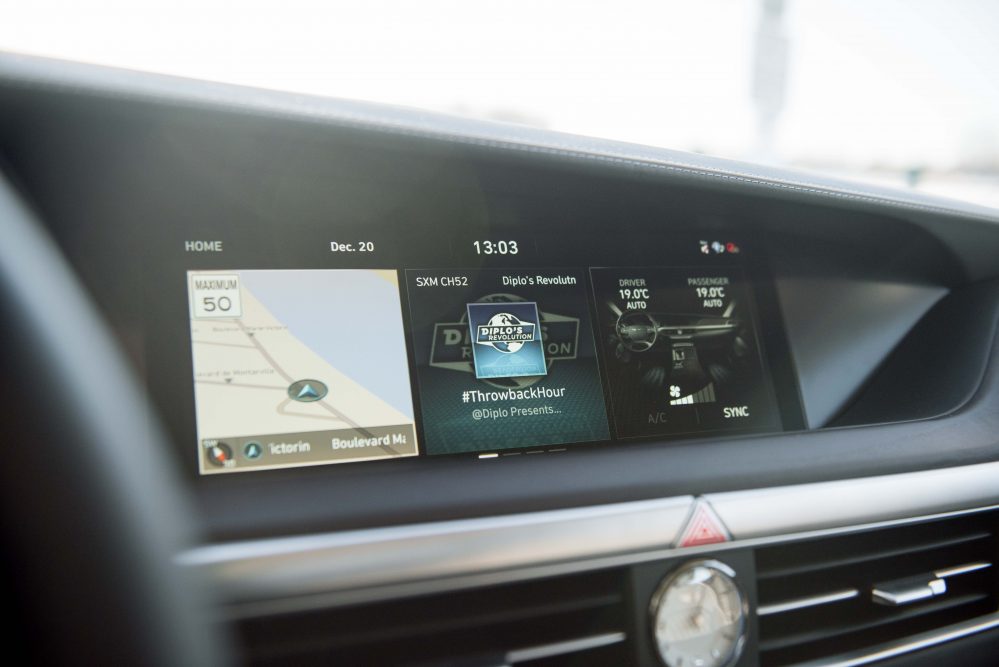 Build quality remains a Genesis strong point, with impeccable fit and finish, superior material quality and bang on ergonomics. Just like the G70 sport sedan, controls are intelligently located, easy to grasp and crammed with downright common sense. Even if the infotainment system isn’t Genesis’ latest gear, it still operates quicker and with better user-friendliness than some Japanese or even European devices.

Where the G90 lags a bit behind is in the amount of luxurious toys it can be fitted with. Granted, the rear seat offers lazy-boy levels of comfort and adjustments, but it simply doesn’t flaunt the same degree of opulence. For instance, while a 7-Series can be had with a panoramic roof, the G90 only comes equipped with a standard sunroof. 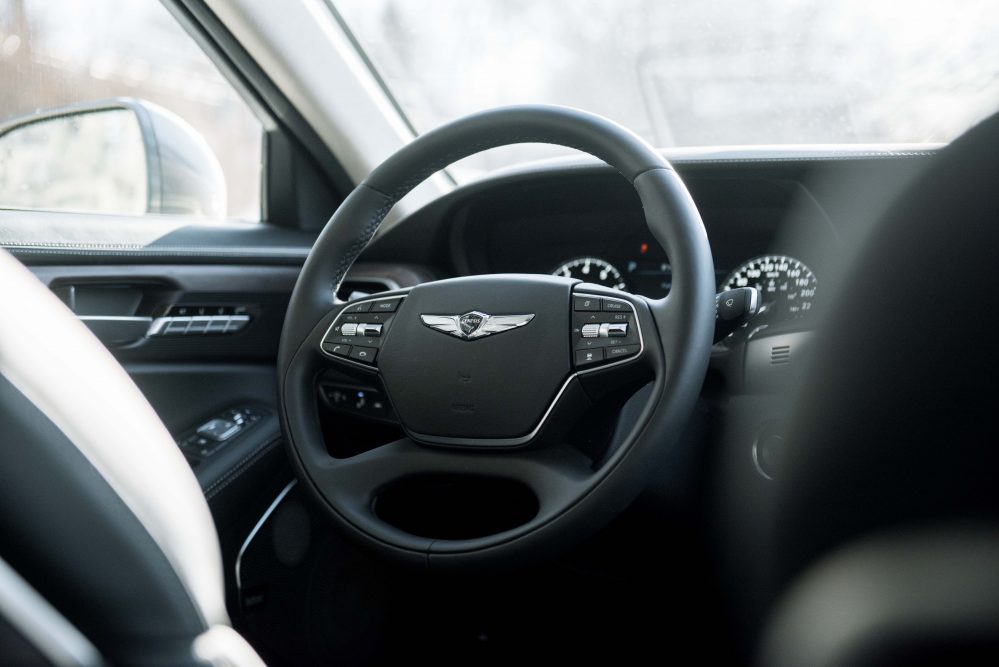 There are no extended wheelbase options, it only comes in one, fixed model type. Ambient lighting can’t be changed to your liking, and there aren’t any fragrance selections either. And no, the G90 doesn’t get a tiny tablet to fiddle with the car’s toys as your chauffeur escorts you to your next destination, nor will it allow you to transform the front passenger seat into a footstool.

It does, however, have a rather loaded center rear console, where passengers can command virtually everything the infotainment and the HVAC system will throw at them. 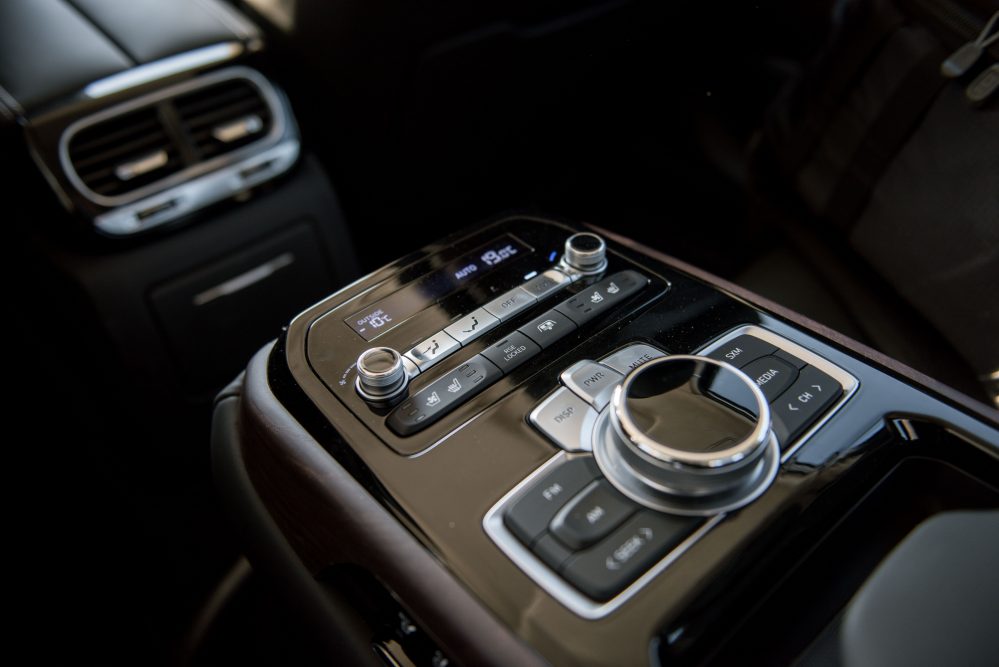 It’s the same story on the road where the G90 exhibits a smooth, composed ride, but never does anything to excite your senses. In a drag race, it would get eaten alive by the BMW. Don’t even think about following a 750Li in a corner.

But that’s not to say the G90 isn’t athletic. Once the gearbox drops down a few gears, that V8 engine puts down decent acceleration, allowing this behemoth of a sedan to sprint to 100 km/h from a standstill in roughly 5.5 seconds. It also sends glorious induction sounds through the cabin all while remaining smooth and refined. Torque is instant and plenty, while power delivery is nice and constant throughout the entire rev range. 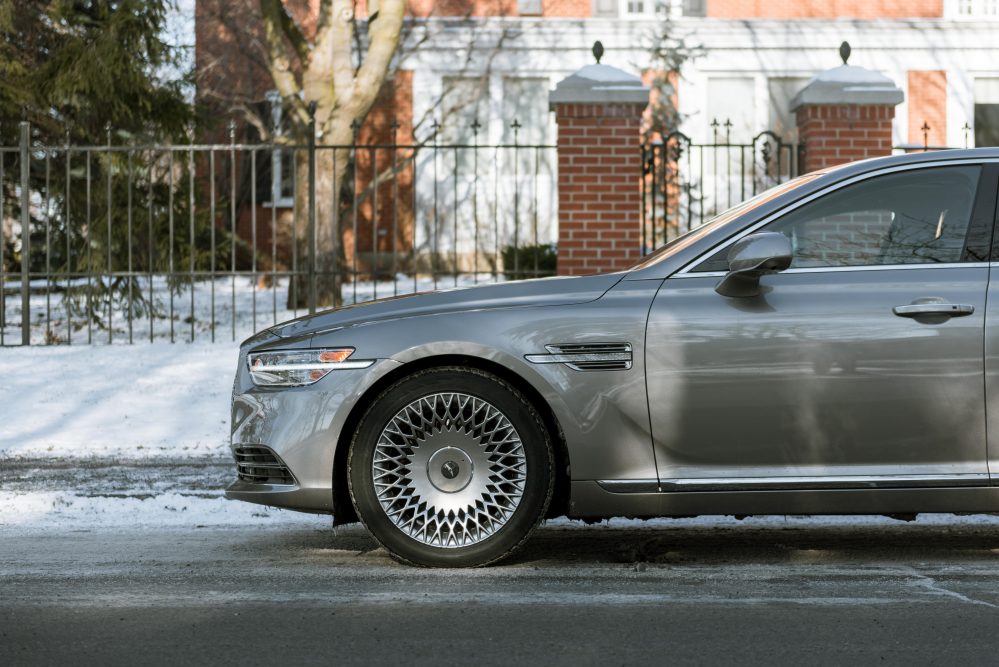 In a corner, again, the G90 won’t trade punches with sports cars, but it’s no slouch either. Granted, it can feel a bit sloppy when you put it through its paces on a curvy road, but there’s a sense of solidity and liveliness from the chassis that encourages spirited driving. A precise and light steering also prevent it from feeling too boatlike, and the cushy suspension simply eats up road imperfections in a single bite. 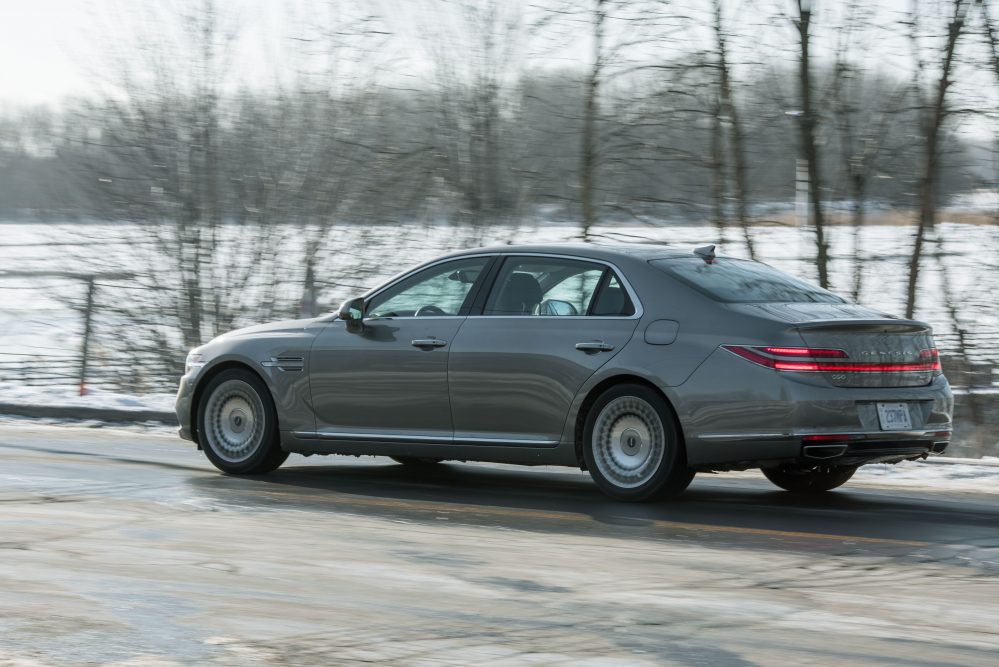 So here’s the million dollar question: is the 2020 Genesis G90 presidential enough to have rich people want to be carried around in one? The immediate answer would be yes. This is a magnificent living room on wheels, as long as you don’t go see what the Germans currently offer in the same segment. Then, you might be disappointed.

But then, you can’t argue with honest to goodness bang for the buck. At just under $100,000 fully loaded, this is a lot of luxury for the price. And in all fairness, the G90 is also a very fine automobile.