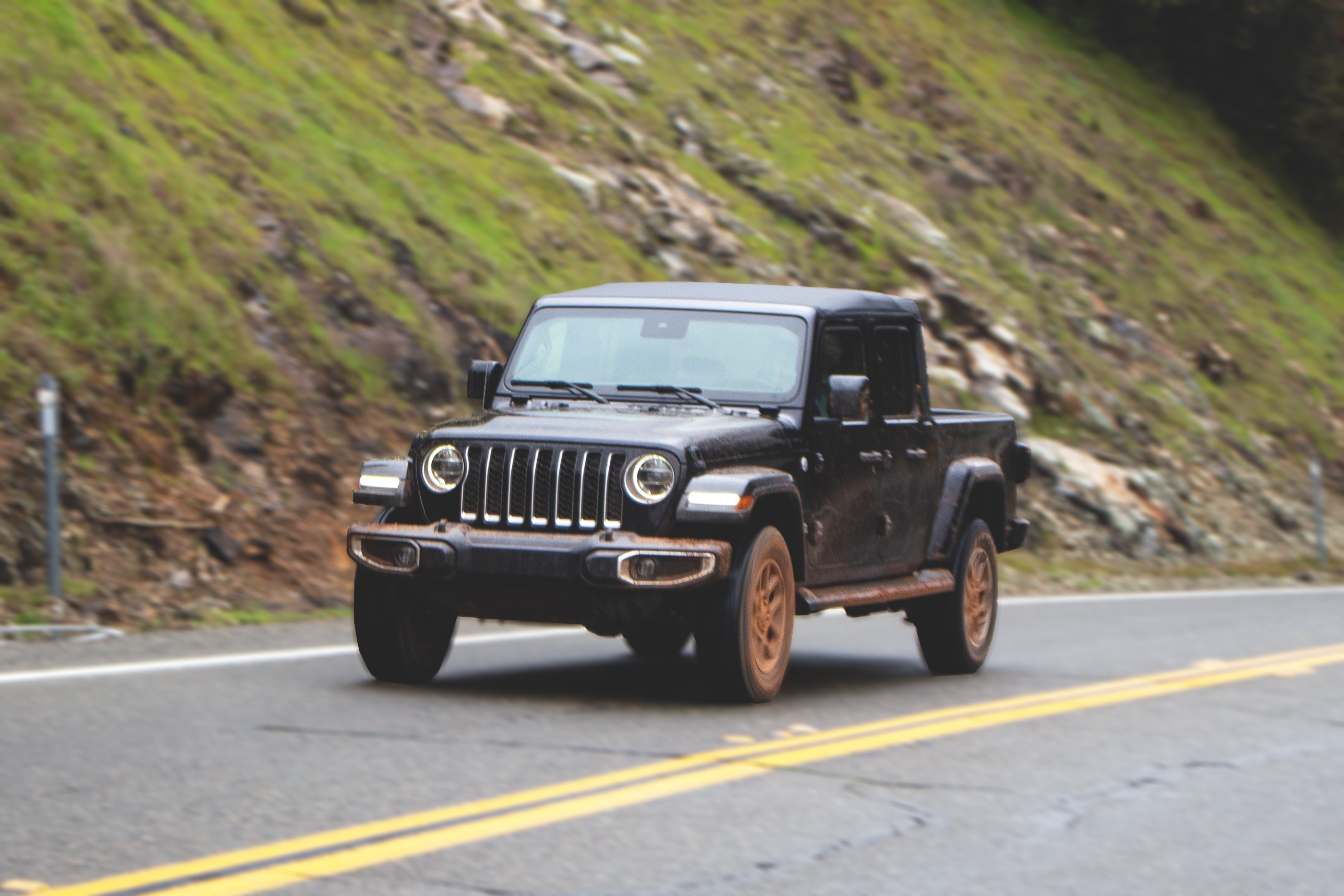 When the 2020 Jeep Gladiator was first unveiled on the internet last Fall, I didn’t really like it. I found that it looked too long and awkward with its Wrangler schnoz and Ford-Model-T rear end. Then I saw it being unveiled in my face at the LA Autoshow in Rubicon trim, climbing over rocks and logs. I was sitting in the first row, so it was literally in my face. I remember simply gazing at it, taking my phone out of my pocket, and texting my boss at my day job saying: “I need to go to the product launch for this thing!” Suddenly, I loved it.

Six months later, I was flying to Sacramento, up in Northern California to drive the Gladiator. Jeep’s new truck kicks ass guys. It’s so good, that it may have just destroyed the entire midsize truck segment. Even if it looks weird. 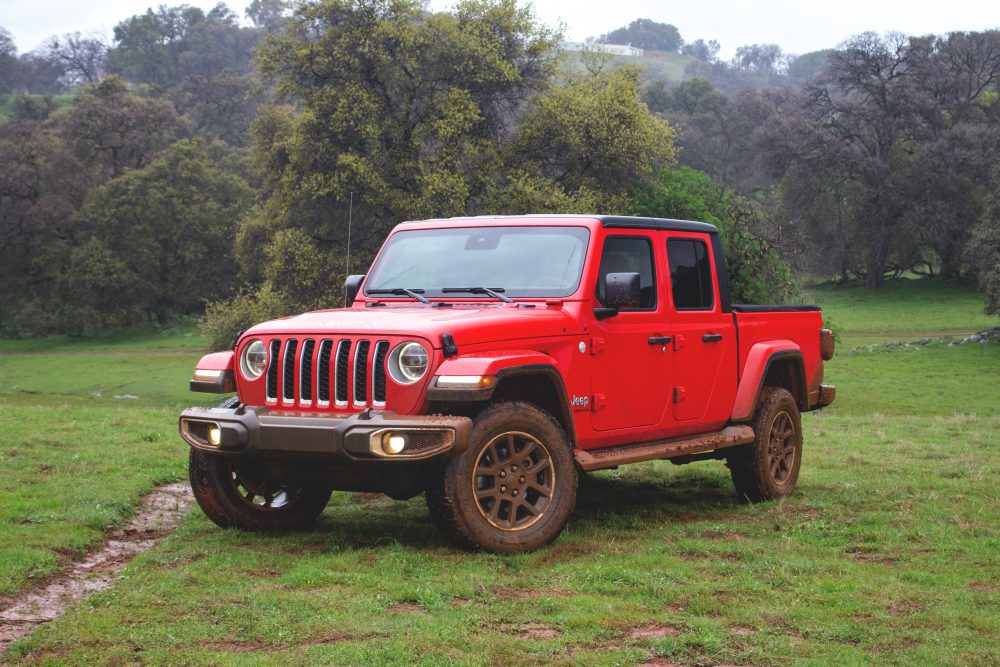 I think one of the reasons the Gladiator wins over rivals Ford Ranger, Toyota Tacoma, Chevrolet Colorado / GMC Canyon, Honda Ridgeline and Nissan Frontier, is that it checks three very specific boxes. First, it’s a Jeep, which means it can tackle rough terrain straight out of the box. Two, it’s a convertible truck! Three, it’s a damn good truck for its class. 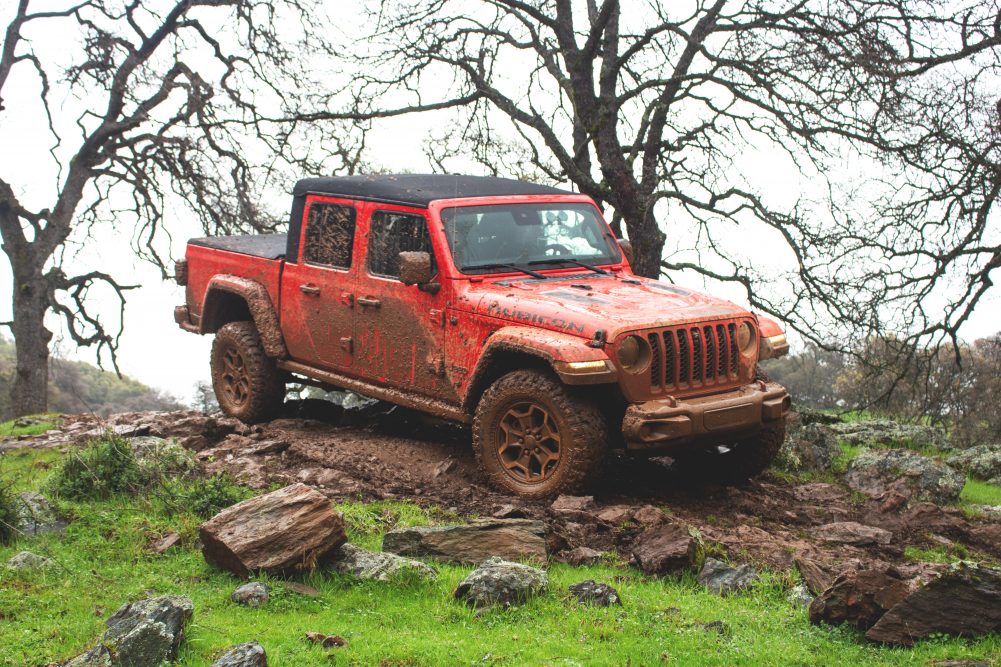 Yes, the Gladiator is based on a Jeep Wrangler, but everything from the B pillar rearwards has been completely altered. The wheelbase was stretched some 19 inches, and the entire frame is 31 inches longer overall, making it the longest midsize truck currently available. Then, its entire structure was reinforced, front and rear tracks were slightly widened, and the brakes now get ventilated rotors to cope with towing realities.

To top it all up, FCA gave it the RAM 1500’s suspension control arms. It’s serious stuff. 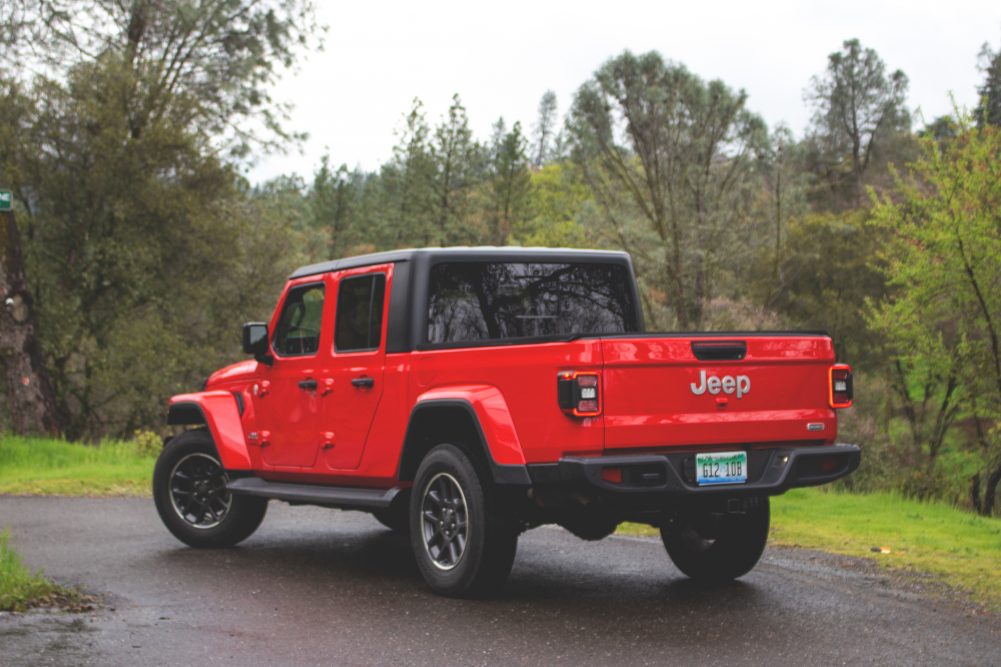 All Gladiators are powered by the tried and proven Pentastar 3.6-liter V6. It’s good here for a claimed 285 horsepower and 260 lb-ft of torque. The good news is, just like in the good old days, all trim levels come standard with a six-speed manual gearbox (thank God!). 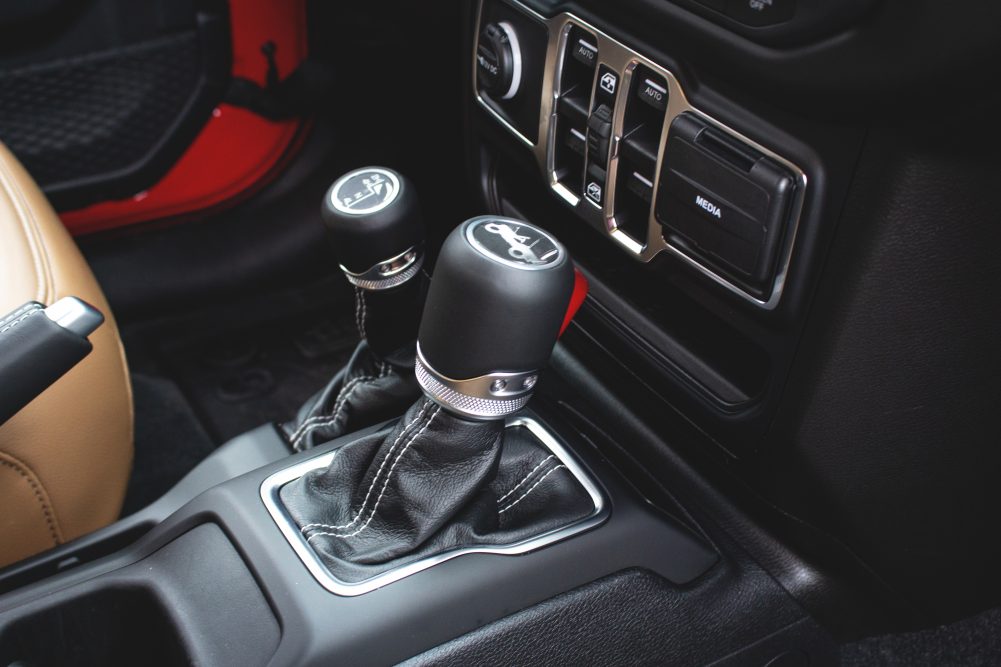 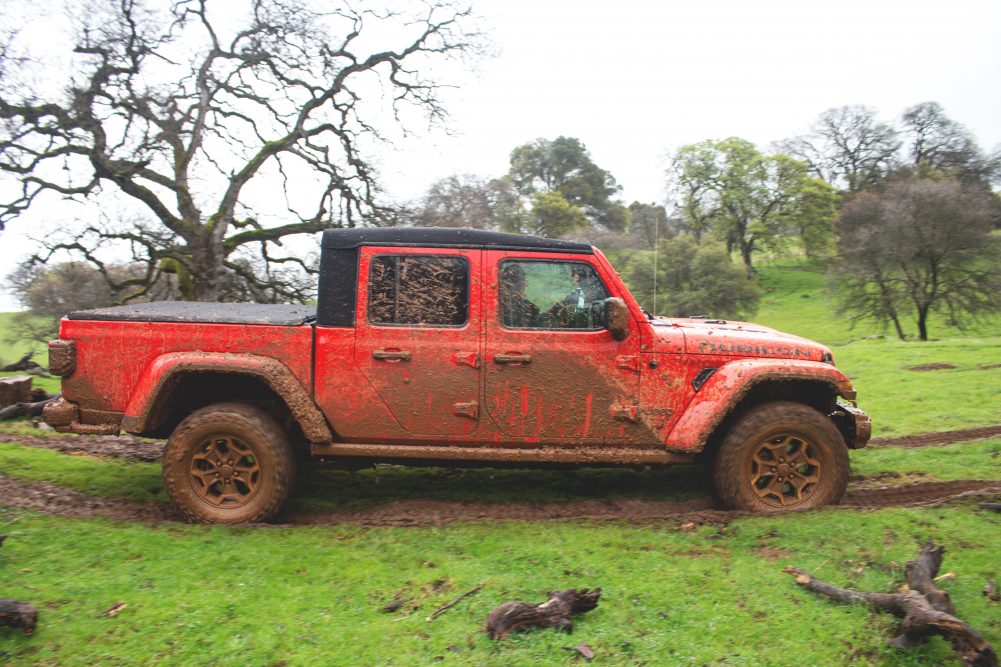 Wait, there’s more. A 3.0-liter EcoDiesel engine will be added to the lineup next year!  It’ll pump out 260 horsepower and 442 lb-ft of torque. What’s more, the Rubicon trim is virtually identical to a Wrangler’s, which means it comes fitted with removable sway bars, Dana 44 axles with locking diffs, a lifted suspension, 33-inch tires, skid plates, a very witty off-road camera fitted with a sprinkler to clean it, as well as tow hooks. 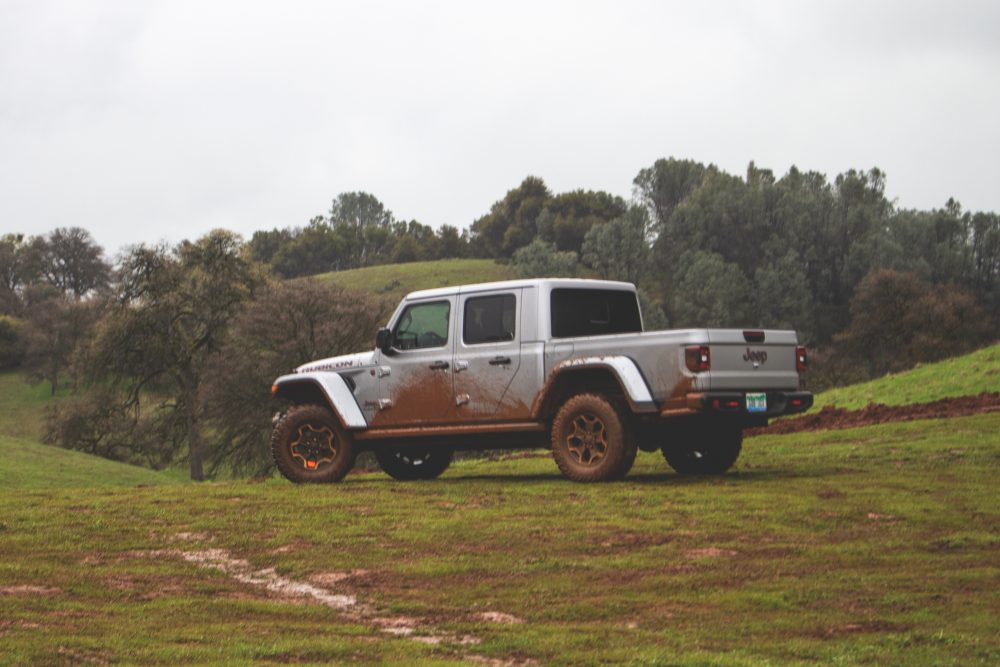 Also : if you already own a Wrangler, and you’ve lost an arm and a leg to buy Mopar accessories for it, you’ll be happy to know that pretty much all of those modifications will fit on your Gladiator, even the door bars, because yes, not only can the Gladiator remove its door and windshield, the doors themselves are the exact same size as a Wrangler’s!

Still not convinced it’s currently the coolest “small” truck out there? Then keep reading. 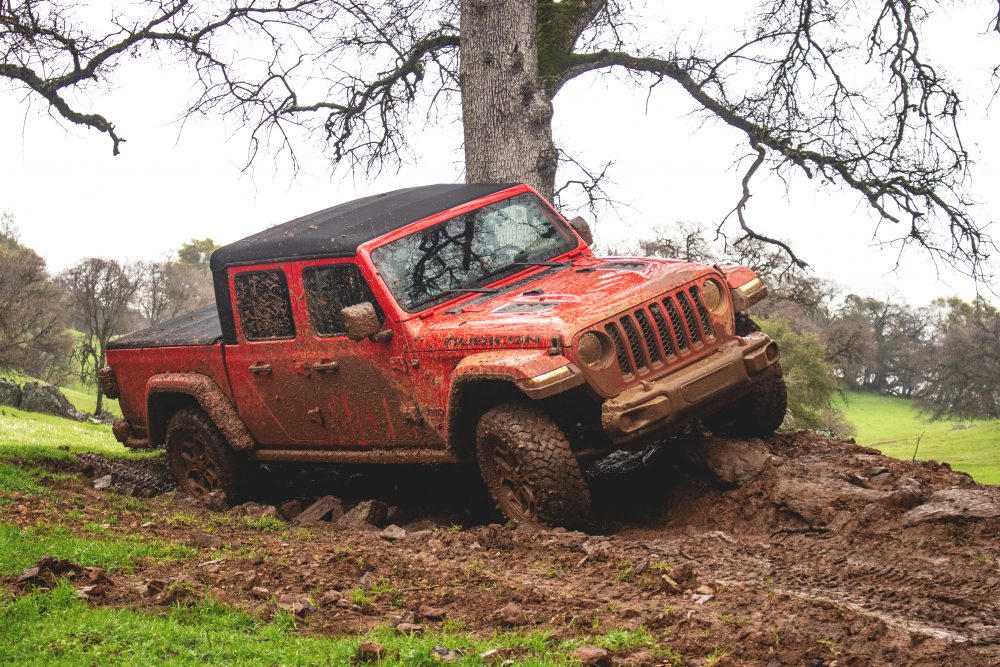 Our time in Sacramento was rather straight forward. An FCA spokesperson quickly resumed the Jeep truck history, reminding us how cool the Comanche was, and making us all wonder why Jeep never continued selling it.

The man then admitted in front of a crowd of journalists that the Gladiator’s fuel economy isn’t that great. He then threw us all the keys and asked us to drive to an off-road course some 50 km outside the city. So I did. 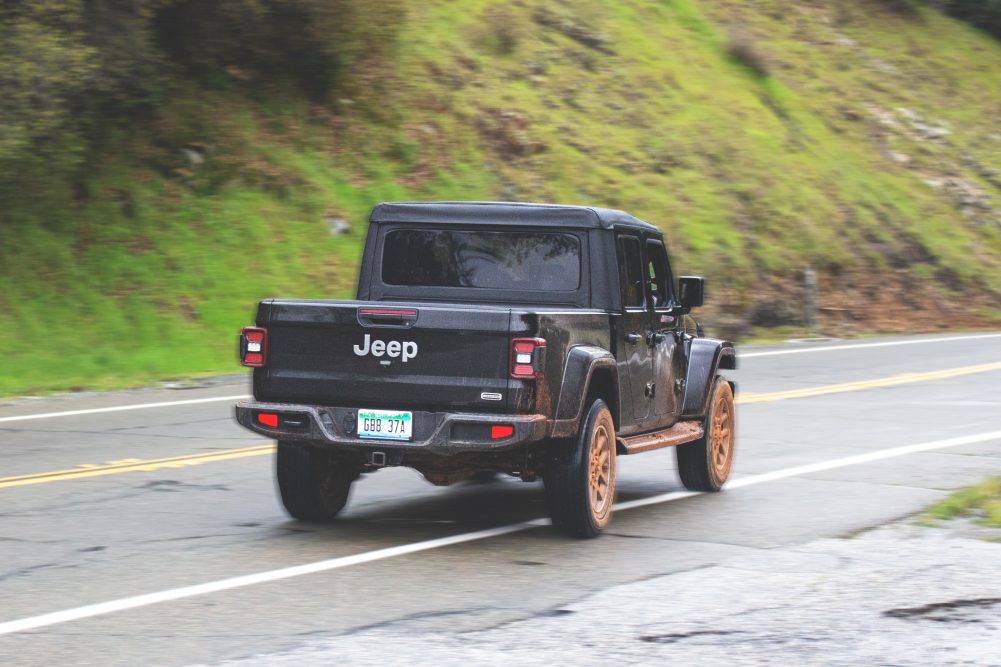 On the road, the Gladiator’s longer wheelbase and RAM suspension bits do help at making it a lot smoother than a Wrangler, but it’s still very rudimentary compared to say a Ridgeline or even a Colorado. If anything, this feels very much like a Tacoma, as if it came from another era, quibbling and wobbling over train tracks and potholes, steering wheel all loose and not particularly confidence-inspiring.

I love that engine though. It sounds great and makes great power across the rev range. 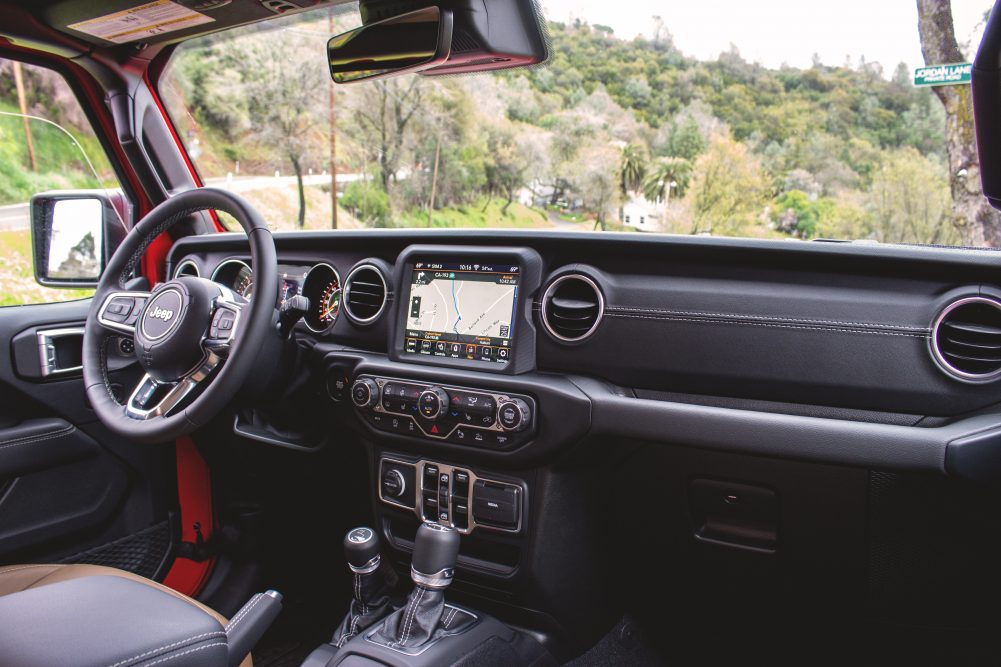 But the Gladiator’s cabin is immensely spacious and comfortable, both front and rear. That’s if you can get past the enormous amounts of wind noise that come from the soft top. I have nothing bad to say about the way the dashboard looks, though. It’s a fantastic design, with knobs, toggles and levers, each cleverly positioned for easy use of operation. The same goes for FCA’s Uconnect infotainment interface. It’s simple, easy to operate, and modern too. Coming from a Jeep, that says a lot. 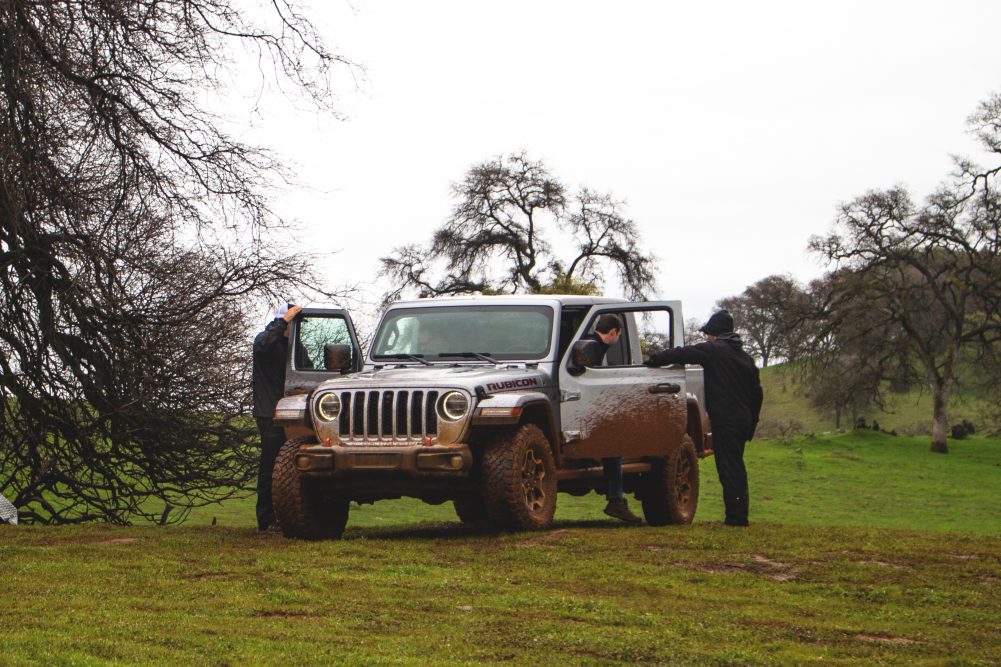 Of course, the part where I really enjoyed the Gladiator was in the off-road course FCA had prepared for us. Not only was it filled with massive rocks, steep inclines and grut, it was pouring rain that day, which turned the entire playground into a humongous mud fest.

And that’s when I realized how capable this truck is. These were some of the most demanding conditions mother nature could have thrown at us, and I couldn’t imagine a base Tacoma, Ridgeline, Ranger, or even Colorado following us in this hellscape. Perhaps a Colorado ZR2 or a Tacoma TRD Pro could have pulled it off, but even then, with a 40.8-degree approach angle and 25-degree departure angle, the Gladiator has a net advantage on its rivals, even the off-road specific ones. Sure, the longer wheelbase makes it a little clumsier in the rocks, but rest assured, the Gladiator is still a Jeep. 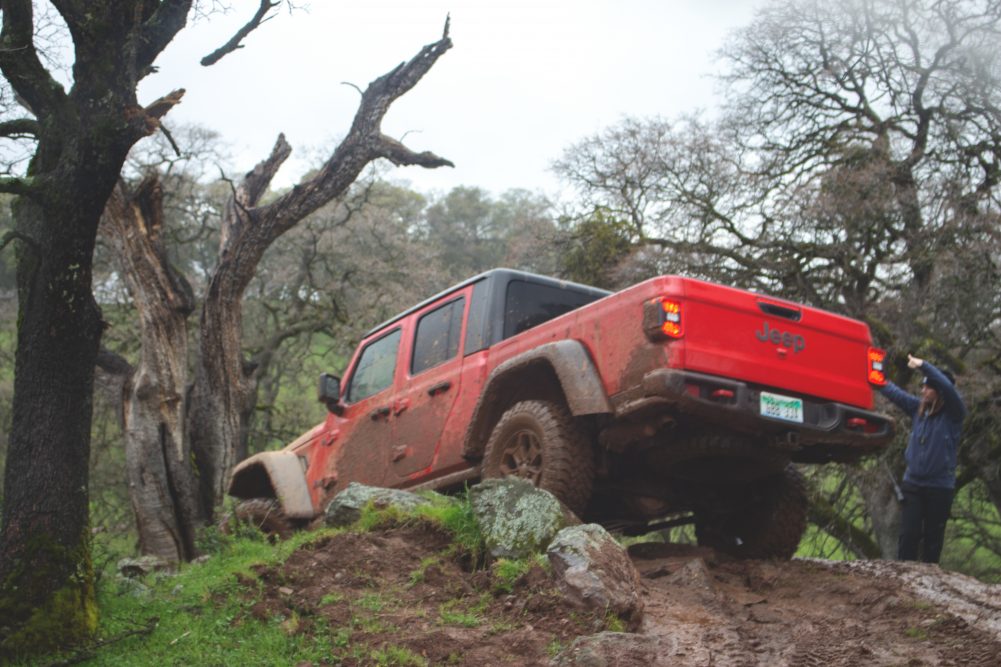 The 2020 Jeep Gladiator kicks ass at being a Jeep, a truck and a convertible. Its also uselessly expensive – a base model stickers at 45 grand, climbing all the way to 52 for a Rubicon –, and it’s quite the gasoholic. I could barely keep the thing under 12L/100 km. 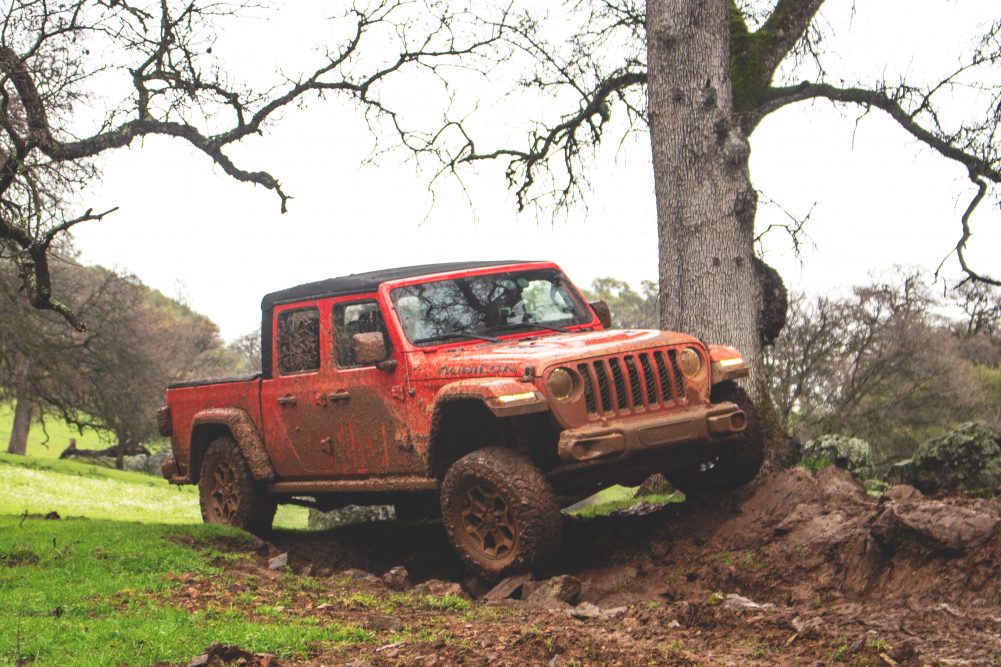 Plus, my tester had a worrying water infiltration problem down at the base of the windshield. Granted, it was a preproduction model, but I’m not convinced a Gladiator will outlast a Toyota, a Honda, or even a Chevrolet. FCA’s had reliability issues lately (whispering). Who cares?! A Jeep truck is back, and it’s absolutely adorable.

Review of the 2020 Jeep Gladiator by William Clavey
Midsize Trucks