2020 Kia Sportage Is Cramped Inside, But Also Still Fun And Quirky 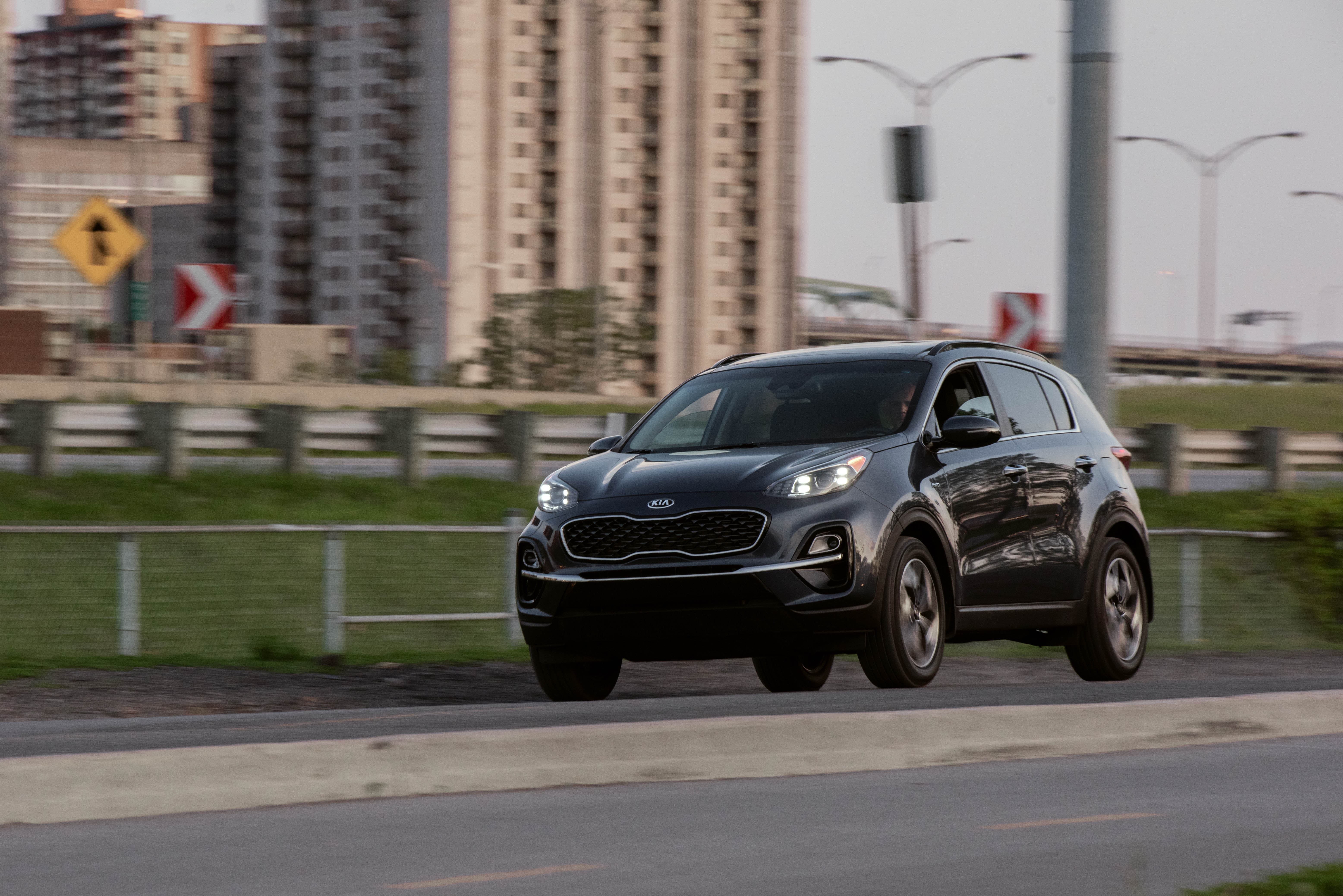 The 2020 Kia Sportage isn’t much different than the other Kia Sportage I drove three years ago. It’s still the same car but with a mid-cycle refresh, which, to be fair, makes the adorable little Sportage look even more awkward. But that’s actually part of its charm, because in this segment, nothing looks this strange. Driving this thing after all the other boring SUVs on the market was actually quite refreshing. 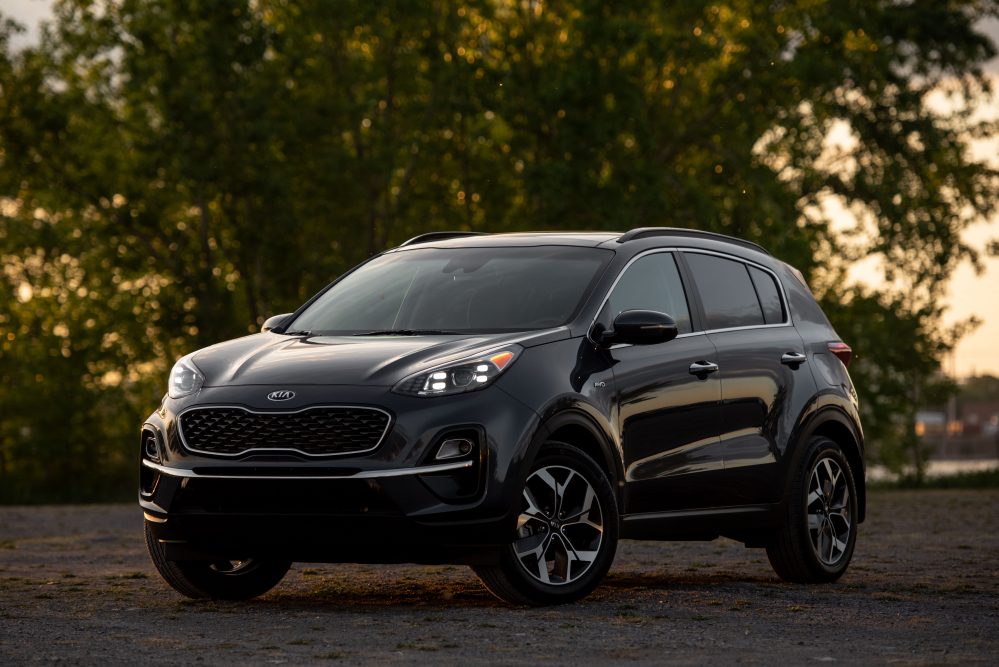 Of course, that’s if you don’t mind the Sportage’s schnoz, because it does look kinda weird; more than ever a lookalike of Yoshi’s egg in Super Mario World. Except now, the egg is smiling.  That said, I do appreciate the Sportage’s proportions as it’s just the right size, never trying to be too long, bloated or weird-looking like so many of its rivals (I’m looking at you Honda CR-V). It’s just a cute little package. 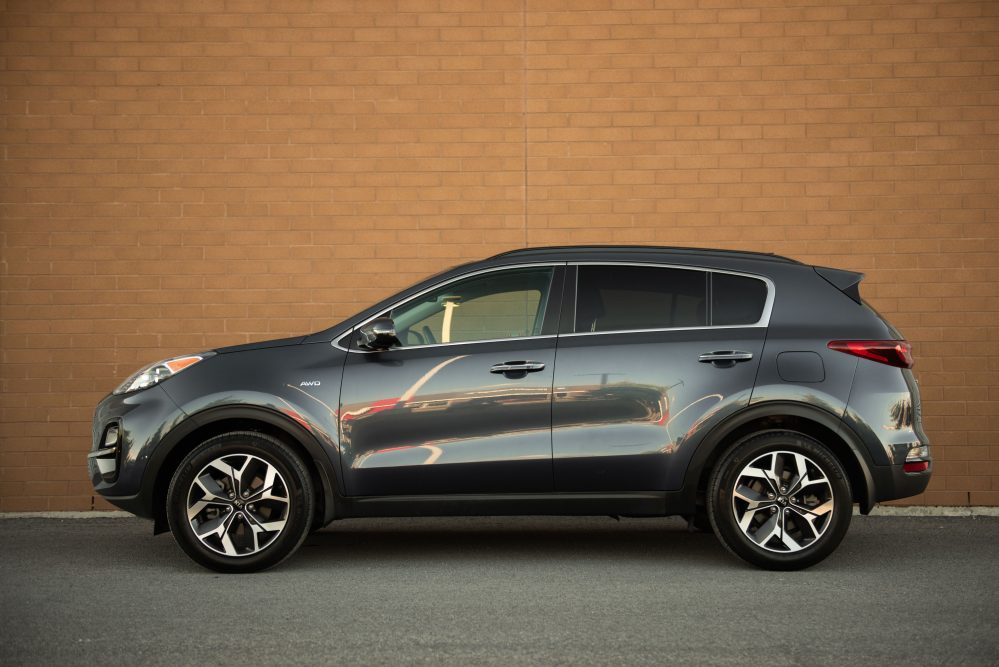 The update, which is new for 2020, nevertheless gives the Sportage a fresher and more assertive look than before. There are new standard and optional features, new wheel designs and a slightly upgraded interior by way of new materials and styling updates. There is also more driver assist systems across the board – in case you care about that kind of stuff. Probably not. 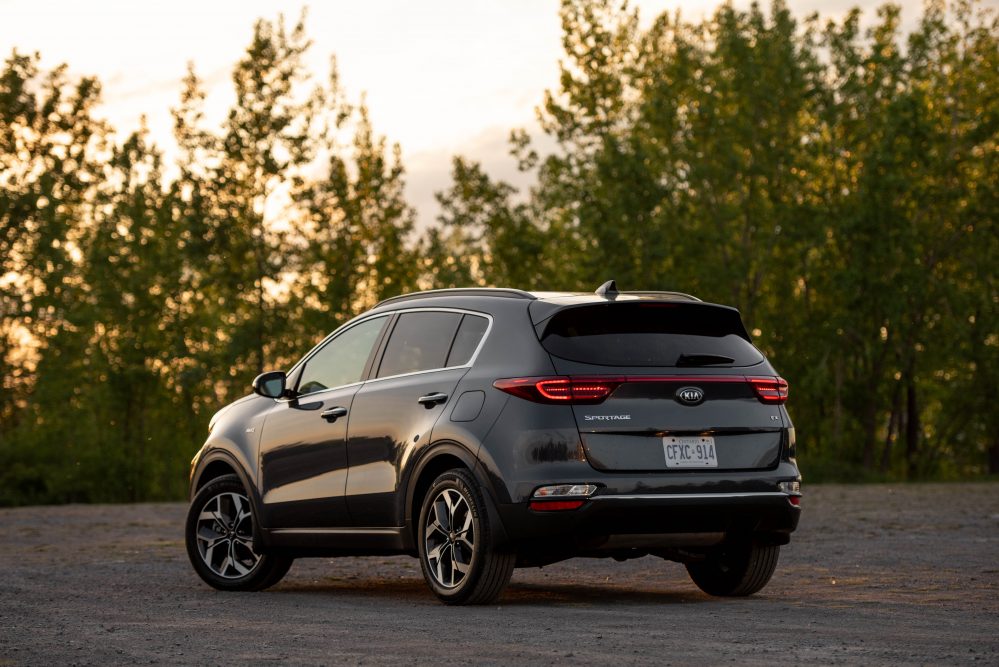 Engine choices also remain unchanged, and that’s totally fine. The last model drove  had the “sweet spot” turbocharged 2.0-liter four-cylinder good for 237 horsepower and 260 lb-ft of torque, which remains unchanged. This tester, however, was powered by the entry level naturally aspirated 2.4-liter four good for an equally unchanged 181 horsepower and 175 lb-ft of torque. It’s mated to a six-speed automatic gearbox powering all four wheels. However, base models come with front-wheel-drive. 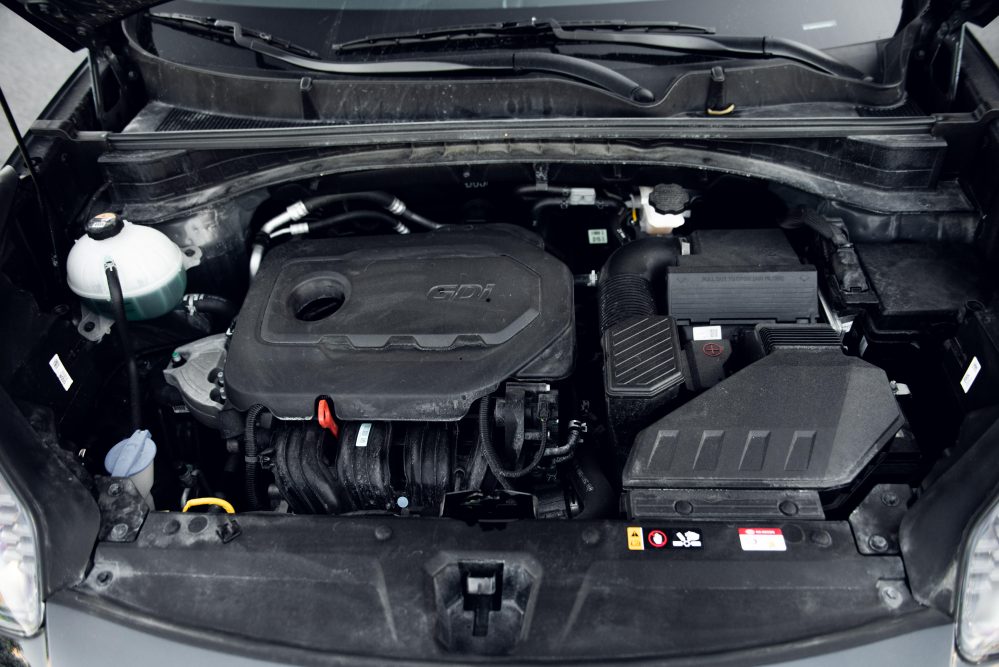 The Sportage kicks off at a frankly decent $27,705, while the car you see here, an EX with a few bells and whistles piled on stickers for a still reasonable $33,605. Unfortunately the turbo engine is only reserved for the top-tier SX trim that costs a ridiculous $41,905, which makes no sense at all. I wish Kia would offer this engine on lower trim levels as a standalone option. 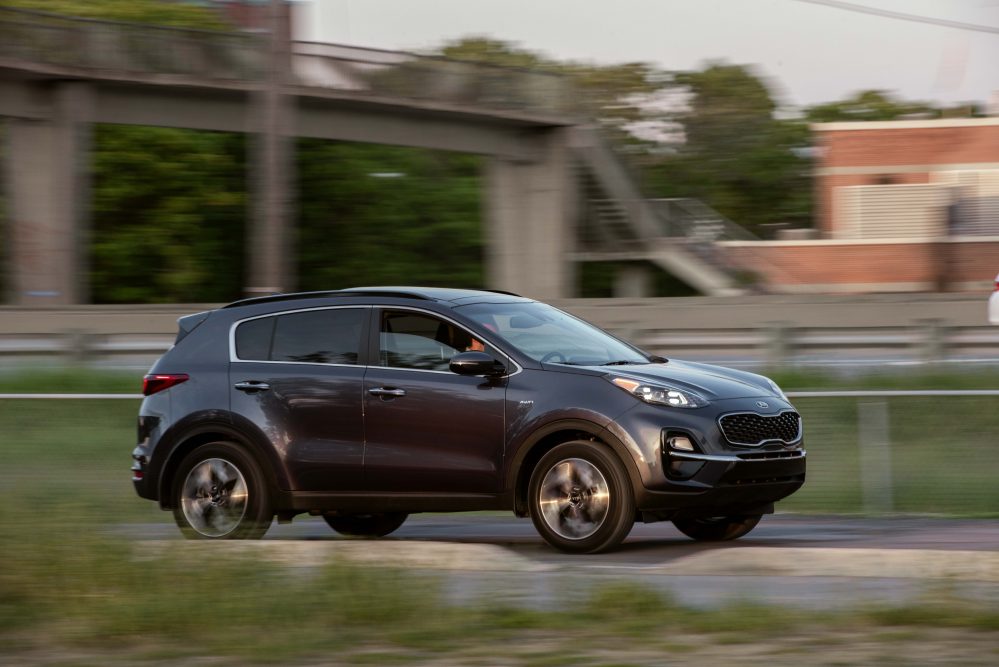 If you’re wondering why I’ve been giving Kia such good reviews lately, it’s not because they’ve been paying me to do so. No carmaker pays me. That will never happen. I say good things because frankly, Kia is doing everything well these days. 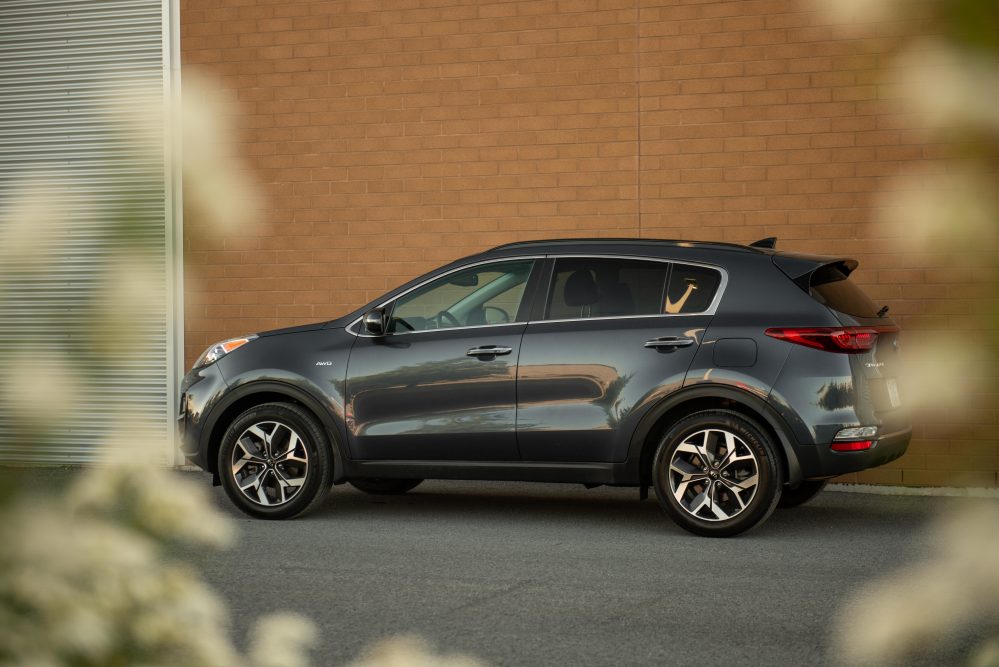 By far its best quality is how straight forward its vehicles are. Everything is so simple and down to Earth that it makes you wonder why other brands don’t follow along. Sure, the Sportage’s drivetrain isn’t exactly revolutionary, and the fuel consumption is fine – averaging in the high 10’s. But what this compact crossover is lacking in sophistication, it makes up for by simply working really well. 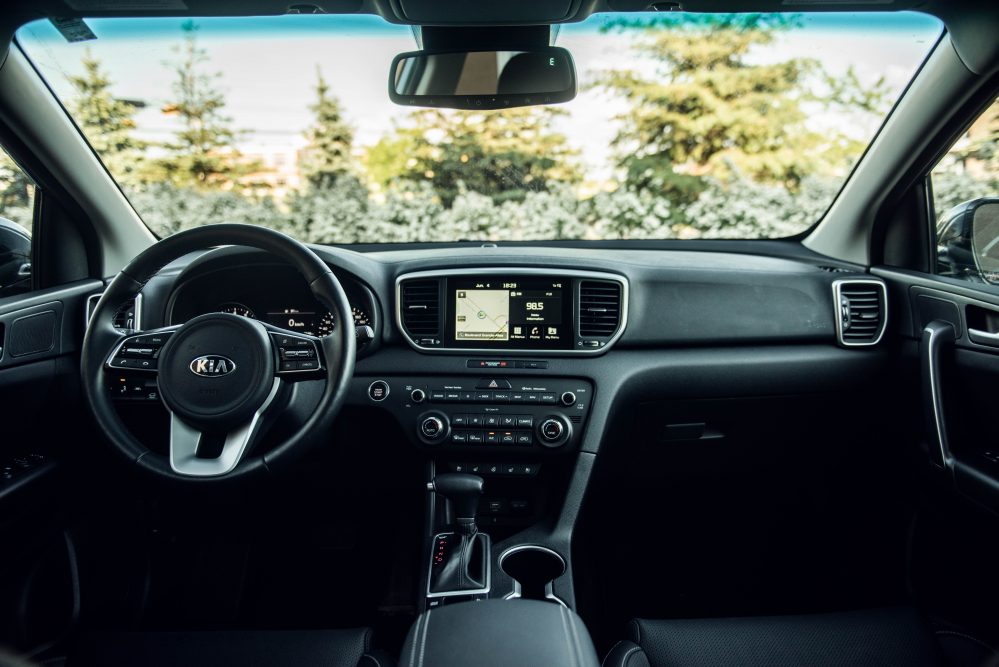 This is a quality product. Forget the shitty Sportage from 20 years ago that would easily get mistaken by a Russian-built Lada Niva. Panel gaps here are tight, material quality is above average, and there’s an overall sense, from how heavy and springy the volume knob feels, or how solid the door sounds when you close it shut, that people with actual names spent some time perfecting it.

That dashboard design is awful though. My god it’s ugly. 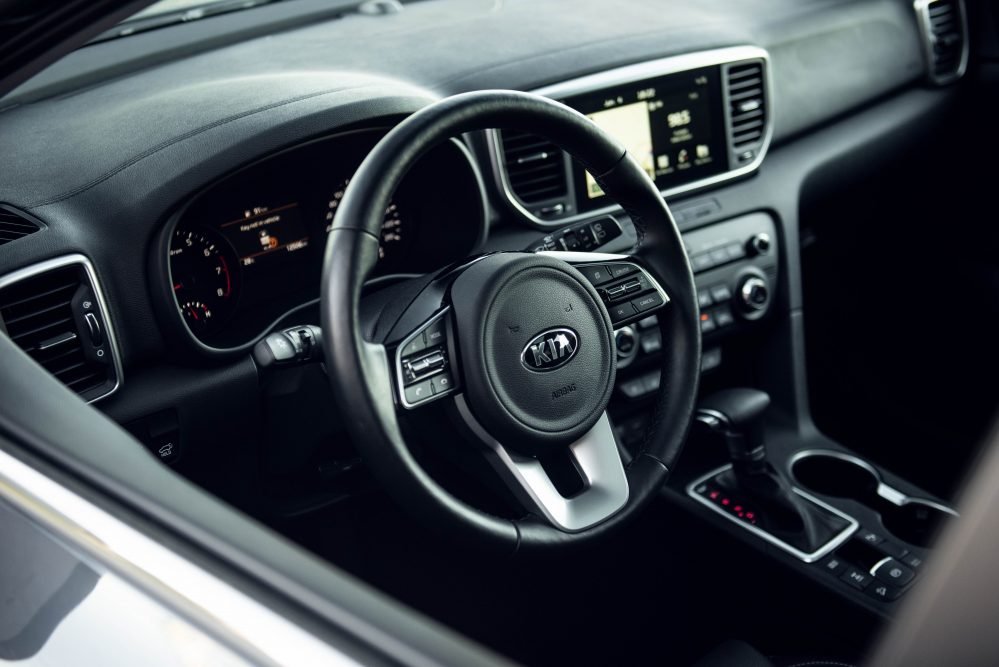 We’re losing such qualities from many carmakers. Even Volkswagen is cheaping it out on build quality these days, and Toyota still hasn’t figured out how to make an easy to use infotainment interface. Meanwhile, Kia is killing it. 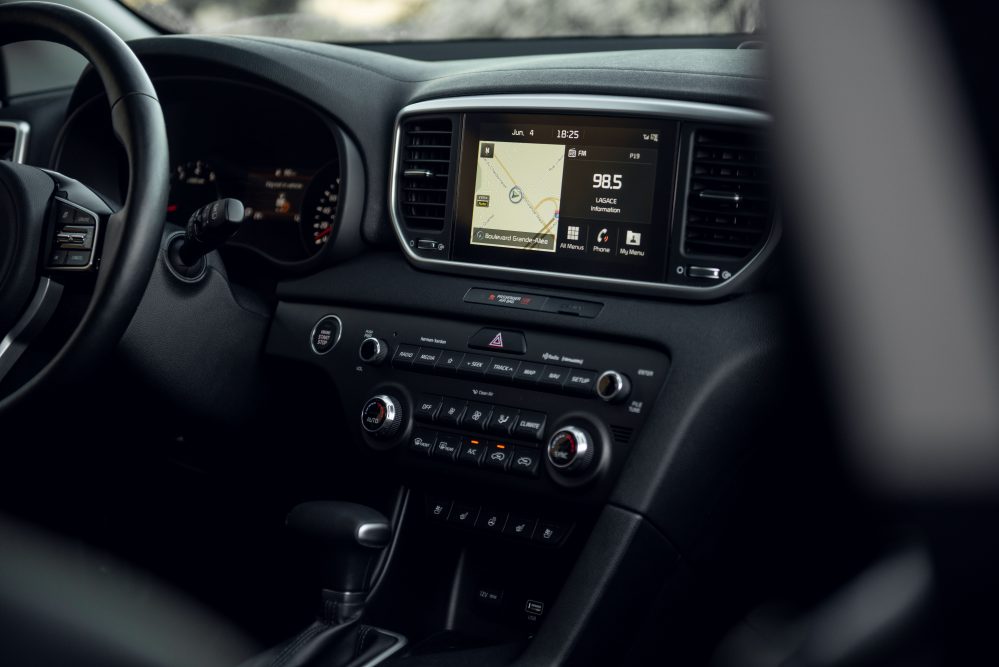 Driving the Sportage is also very simple, non-dramatic and casual, but also surprisingly fun and peppy. The base engine isn’t powerful, nor does it sound particularly good, but it gets the job done. Plus, you can really thrash this thing. Smash the throttle pedal and that gearbox doesn’t hesitate one bit, slams a lower gear, and shoves that four-pot in the higher revs for more power and more fun. 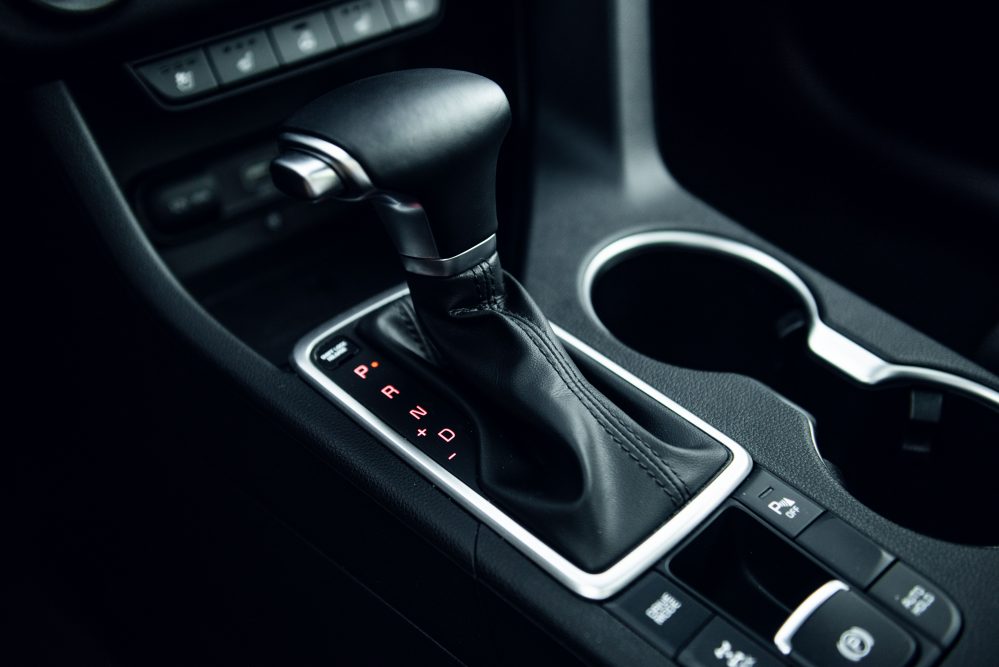 It all happens so quickly and so energetically that this could very well be mistaken for a Honda product from the late nineties. And that’s coming from a dude that has owned Hondas his entire life. 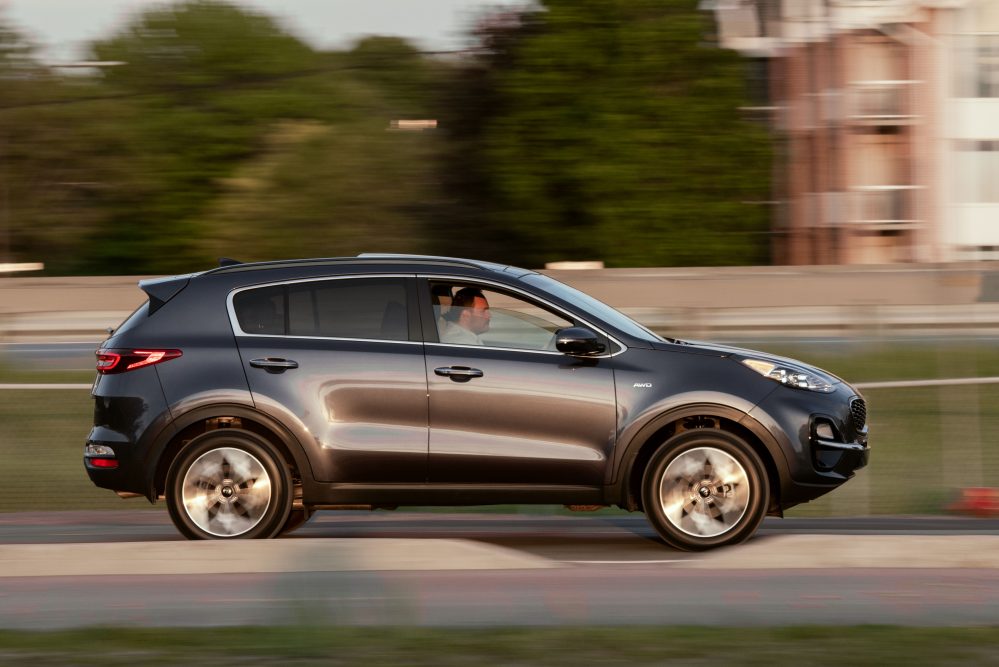 Handling is good, but obviously not sports car dynamic good. The Sportage carries speed effortlessly and its chassis calibration is frankly superb, allowing you to gun it out of a corner without feeling the front end flying away. It’s composed, nimble and well thought out, but that cabin is rather loud at highway speeds. 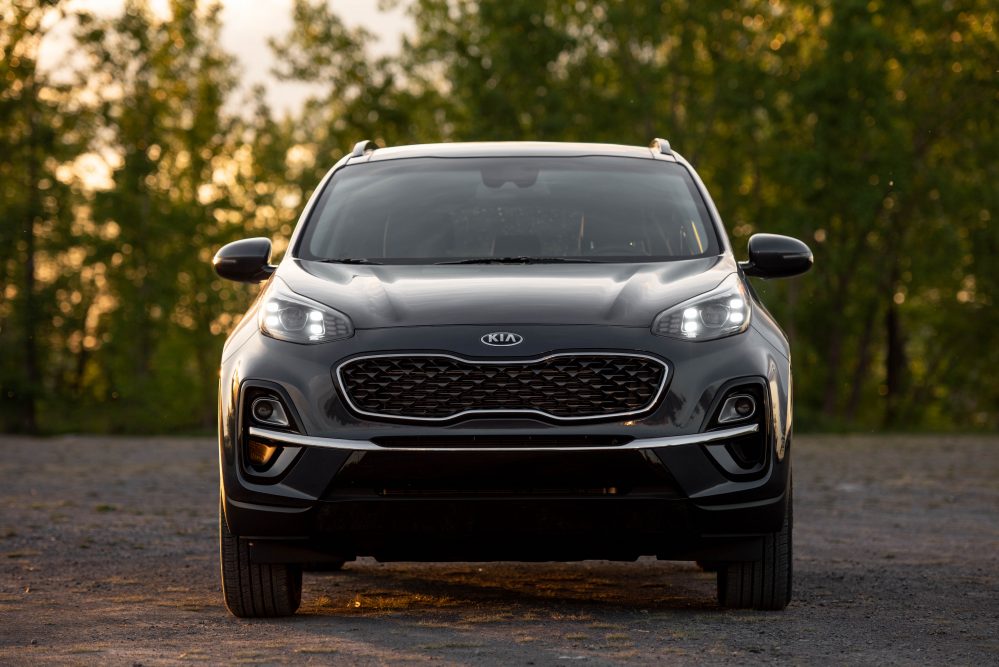 Of course, no vehicle is perfect and the 2020 Kia Sportage really puts that in your face. While it does everything supremely well – from its downright class-leading infotainment interface, to the simplest gauge cluster in the industry -,the Sportage is sadly a little cramped inside. 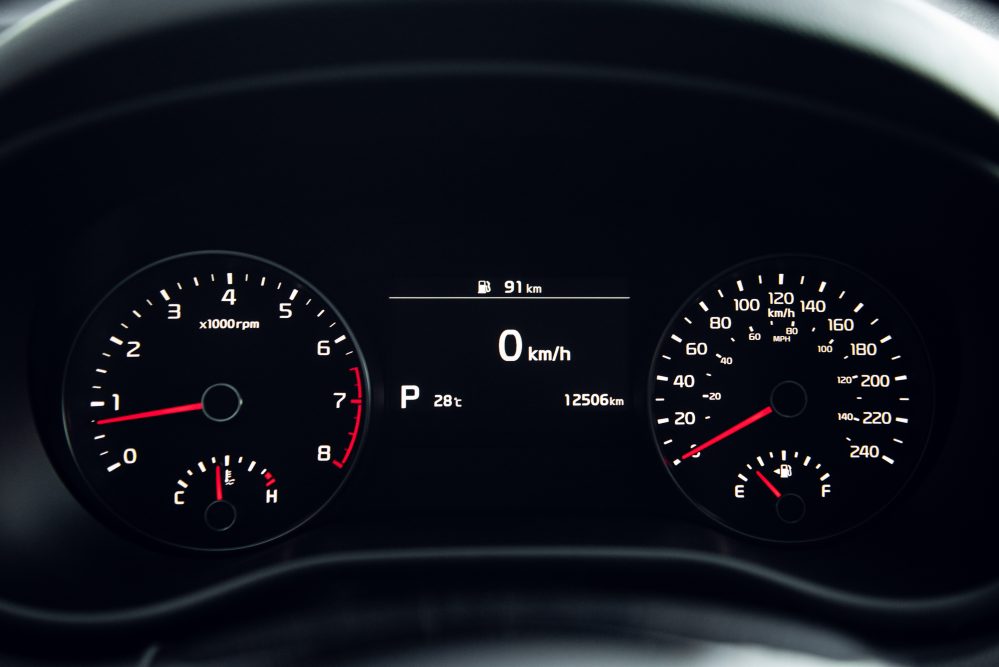 Rear leg and headroom is tight when pitted against its main rivals, while cargo hold isn’t exactly up there among the best. 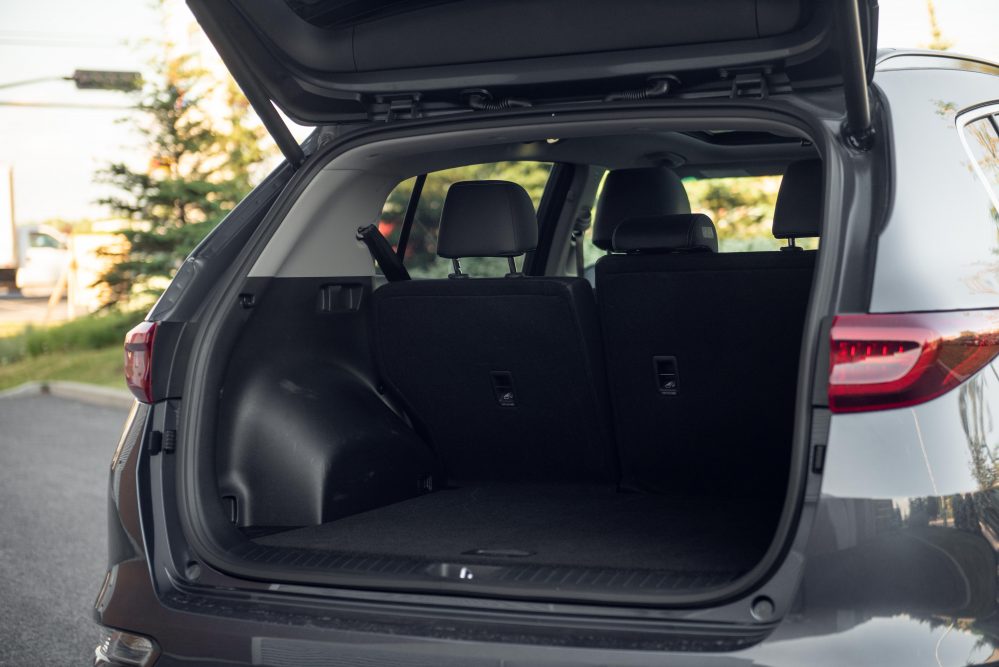 For reference, total cargo space with the rear seat folded flat is 1,701 liters. Don’t get me wrong, that’s still more than ample for most hauling needs, but it remains low compared to class-leading rivals like the Honda CR-V (2,146 liters), Toyota RAV-4 (1,976 liters) and Nissan Rogue (1,951 liters), just to name a few. However, the Sportage is a hair more spacious than the very tiny Mazda CX-5 (1,687 liters). So there’s that. 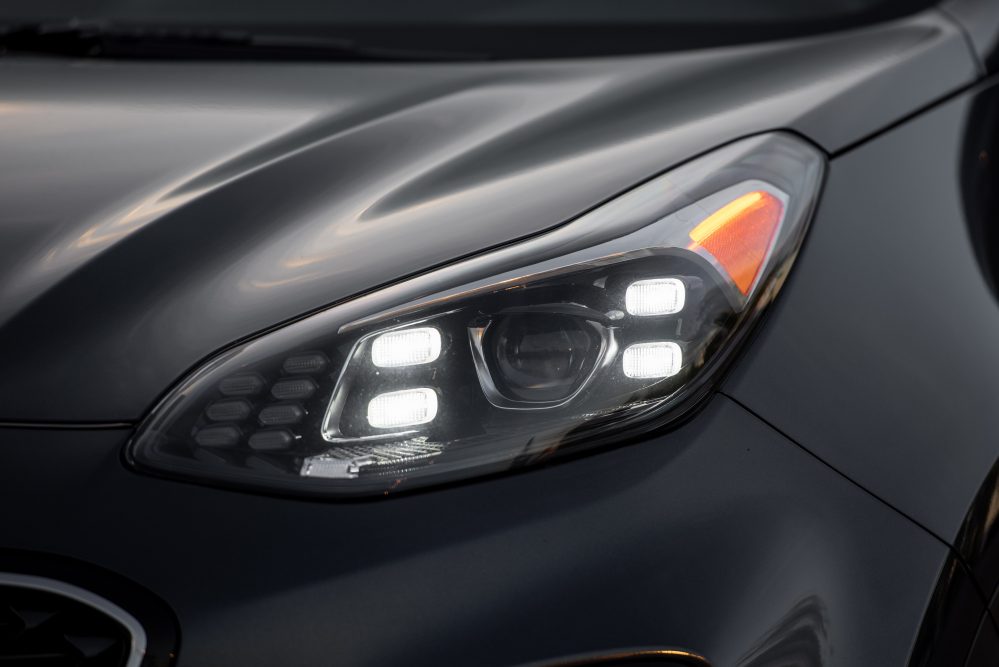 There’s also no hybrid powertrain or electrified mode variant here, or anything to improve its lukewarm fuel economy. Like I said, the Sportage isn’t exactly “advanced”. 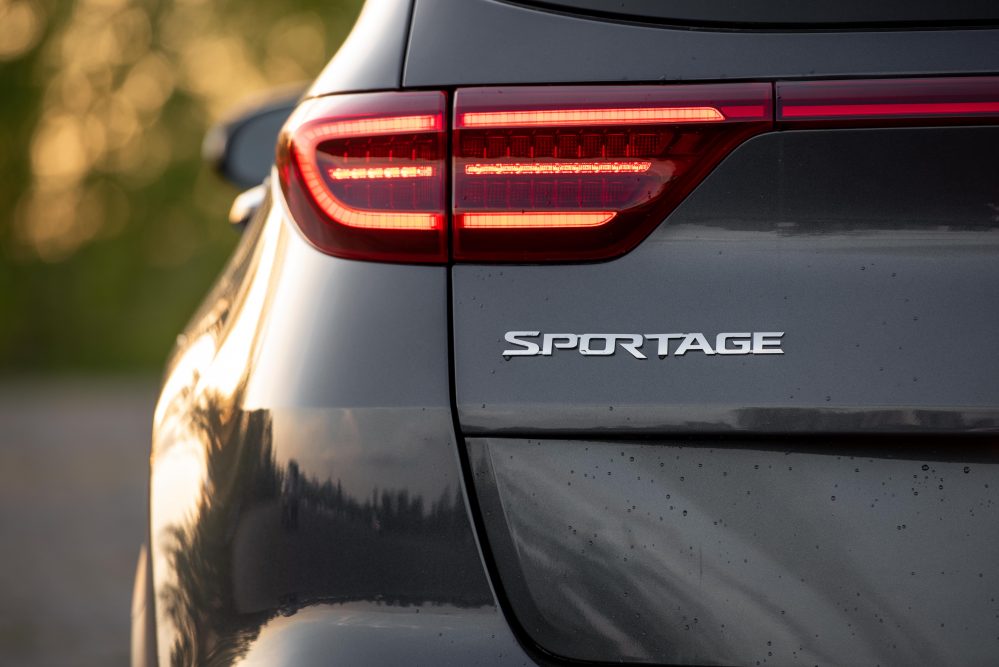 But, at the end of the day, people want something that works and that doesn’t cost them an arm and a leg, and in that respect, the 2020 Kia Sportage delivers on that promise. No matter which variant you choose, you’re sure to be getting more for your dollar than with a Japanese alternative. You also don’t need to climb the ladder very far to find yourself behind the wheel of a frankly loaded example. 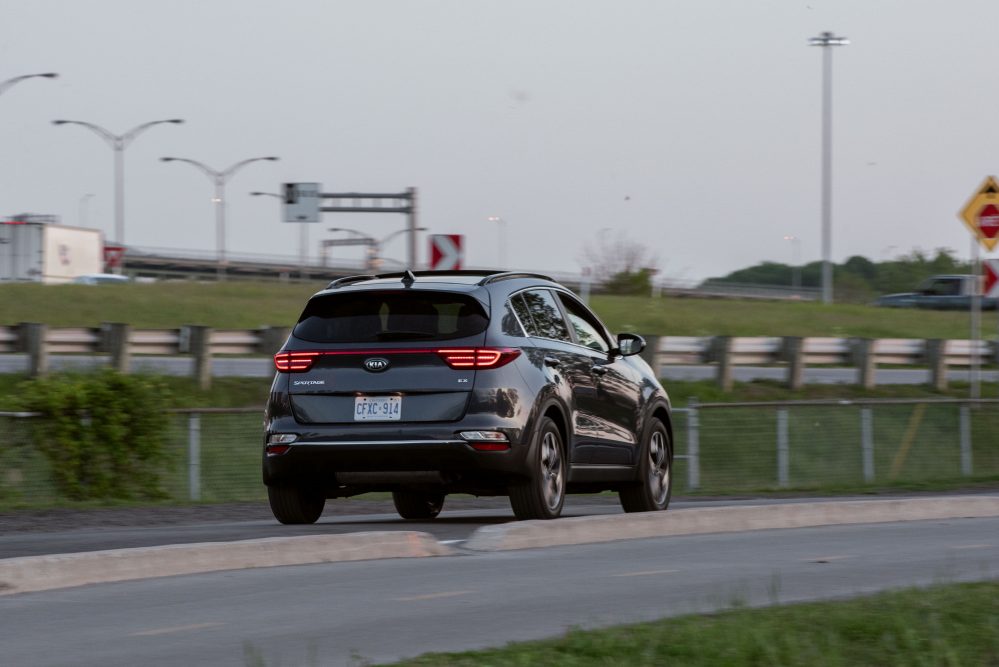 Add to that Kia’s current promise of paying – not delaying – your first six monthly payments as a strategy to boost post COVID-19 sales, and what you end up with is a cheap and straight forward urban runabout that also happens to be quirky looking and somehow, fun to drive. I say give the brand a chance. Let go of your prejudice. Who knows, maybe you’ll do like me and come back for more.