2020 Kia Telluride Proves How Much Kia Has Grown 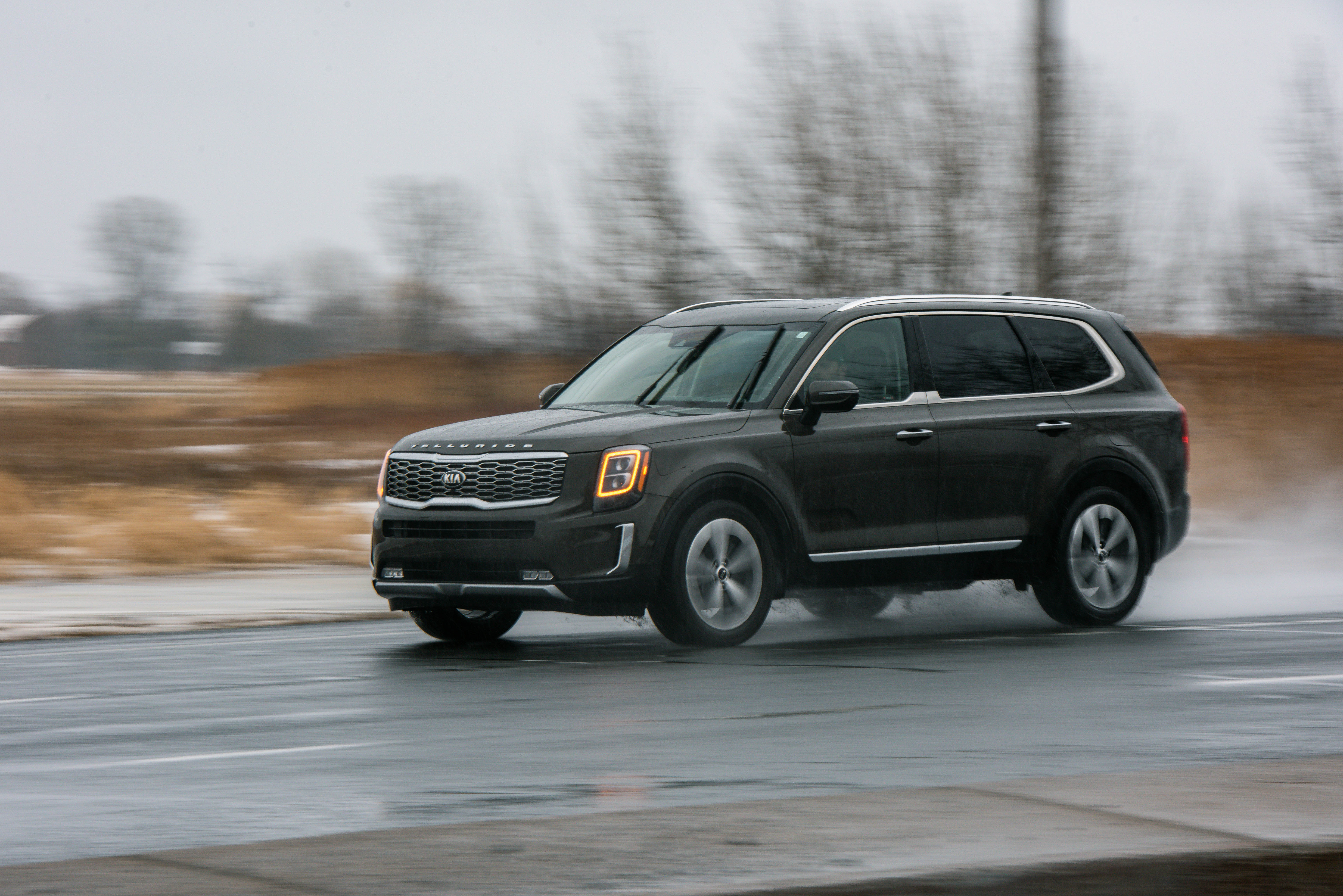 The moment I sat inside the 2020 Kia Telluride, I knew Kia had hit another homerun, revealing just how quickly the brand has grown in just under 20 years. My dad once owned a 2000 Kia Sephia. It was a piece of shit, one of the worse cars he ever purchased actually, less reliable even than his 1989 Chrysler LeBaron GT Turbo. Imagine.

Yet, today, Kia manufactures attractive, well put together, surprisingly reliable and fun, quick cars like the Stinger and Forte GT. Their cars are so good now that I have a hard time finding them faults. The Telluride simply maintains this momentum.

Look At That Face 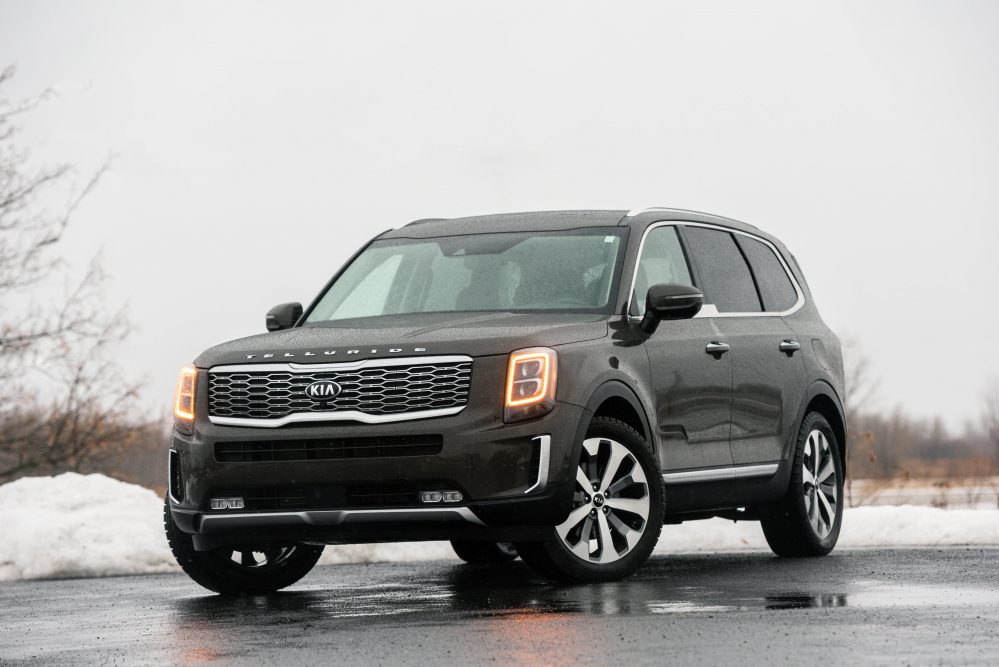 It took me a while to fathom the 2020 Kia Telluride’s looks, but now that I’ve digested its boxy, adventurous design, I actually find it to be a rather attractive midsize SUV, better looking even than its corporate twin, the Hyundai Palisade. I  drove the Palisade over in South Korea before it arrived here, which is why I was genuinely curious to drive the Kia to compare. So far, they ride about the same, but I’ll get back to that in a bit. 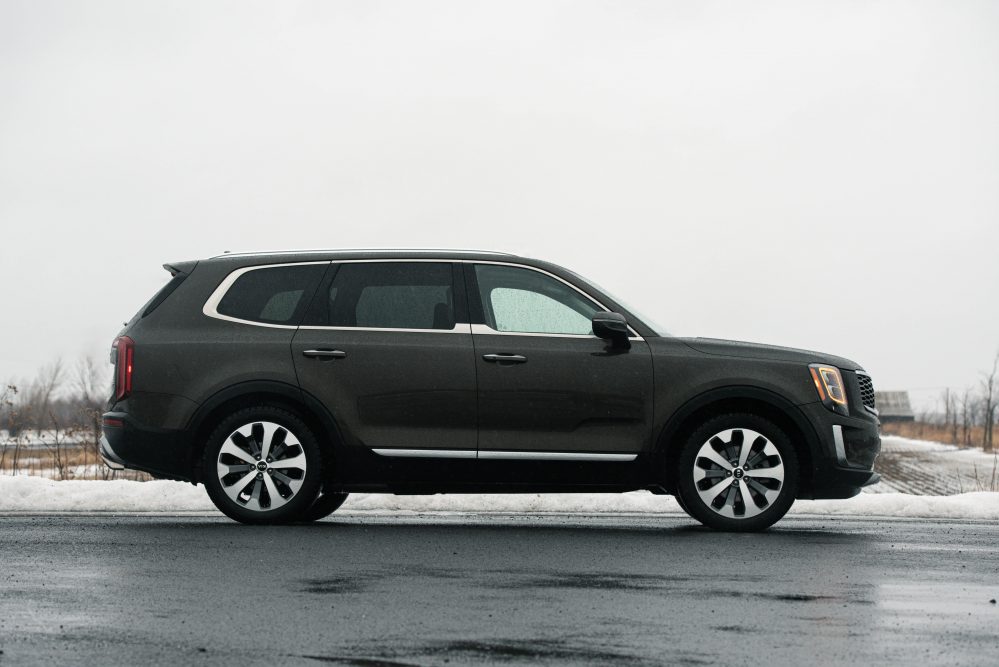 This is actually the second time Kia attempts to penetrate this segment. It tried with the Borrego back in 2009, which was simply introduced at the wrong time, an era when gas prices were soaring and people ironically didn’t care much for large SUVs. It was also a time when Kia still wasn’t taken seriously by consumers who typically bought these things.

The Telluride is therefore the second attempt, here to take on popular family shuttles like the Honda Pilot, Toyota Highlander and Ford Explorer, just to name a few. It’s a very crowded segment, and many of them are solid. 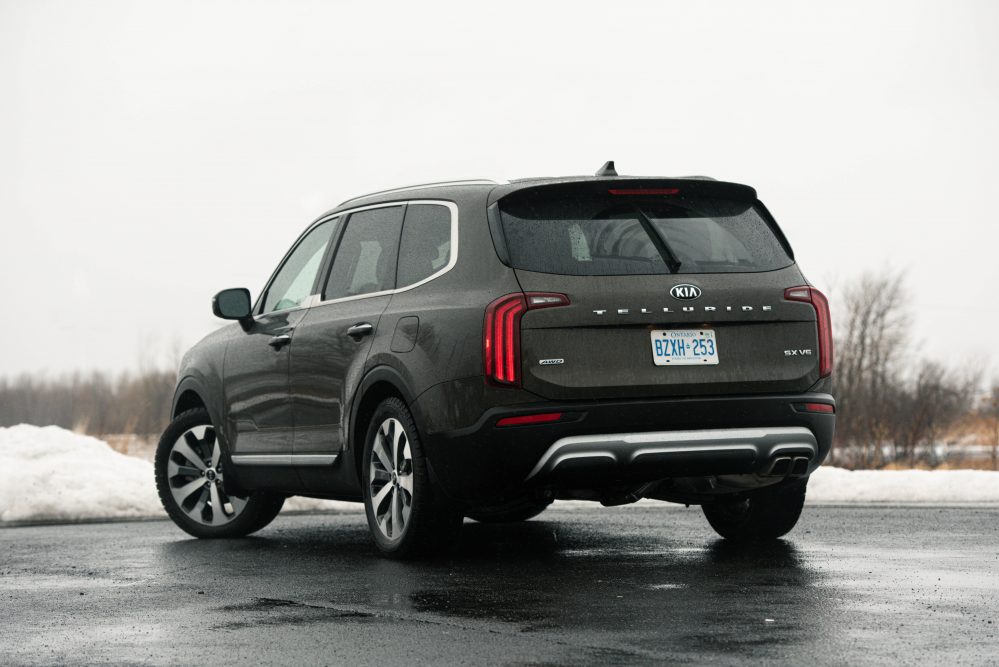 So, the Telluride looks big, boxy and, well, expensive. I absolutely love those rectangular daylight running lights that light up in yellow, and the rear end has a nice European feel to it, all while appearing like nothing else on the road, let alone in this price range. It sure looks unique and, in my opinion, much better than a Palisade. 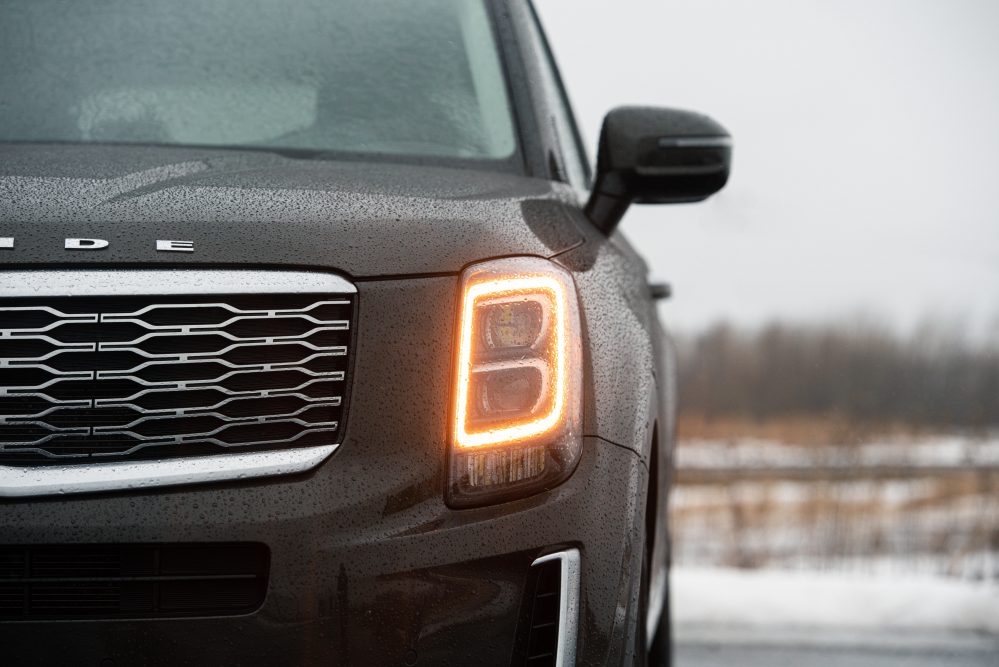 Only one engine powers this thing, and it’s a smart choice: a naturally aspirated 3.8-liter V6 good for 291 horsepower and 262 lb-ft of torque. It’s mated to an eight-speed automatic gearbox and in Canada, comes exclusively with all-wheel-drive. 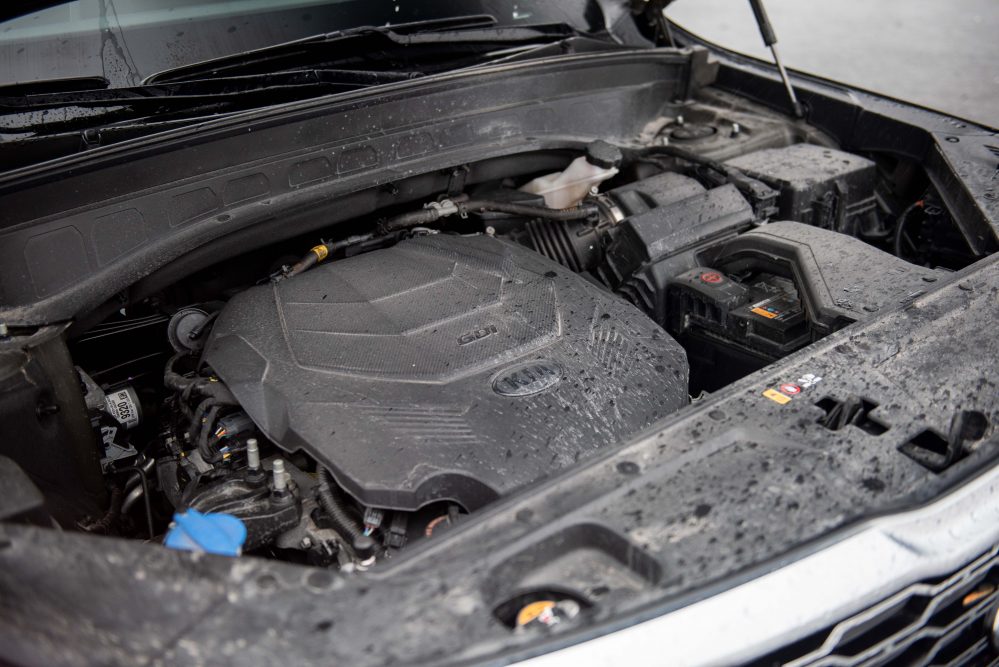 I say this engine is a smart choice because if you’re going to tow, you’re way better off with a good-old V6 engine and not a turbocharged four like what you get in a Subaru Ascent or Explorer. A turbo engine typically shows earlier signs of wear and tear when it’s being put through its paces; i.e. when it’s towing large things. 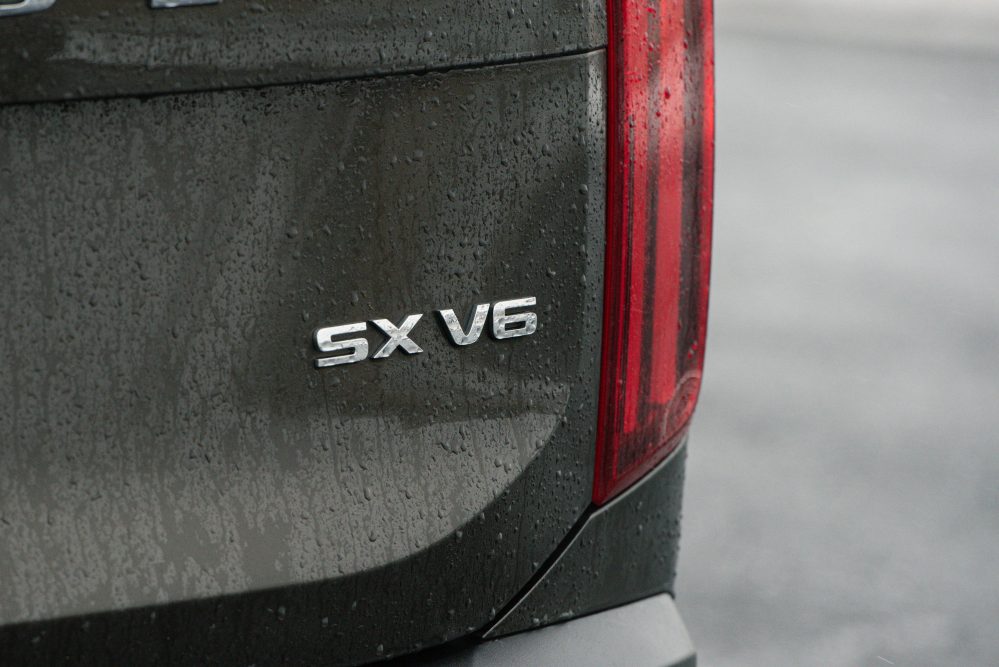 This V6 not only proved reliable in past Hyundai/Genesis vehicles, it allows the Telluride to tow up to 5,000 pounds, which puts it right smack in the heat of the segment. 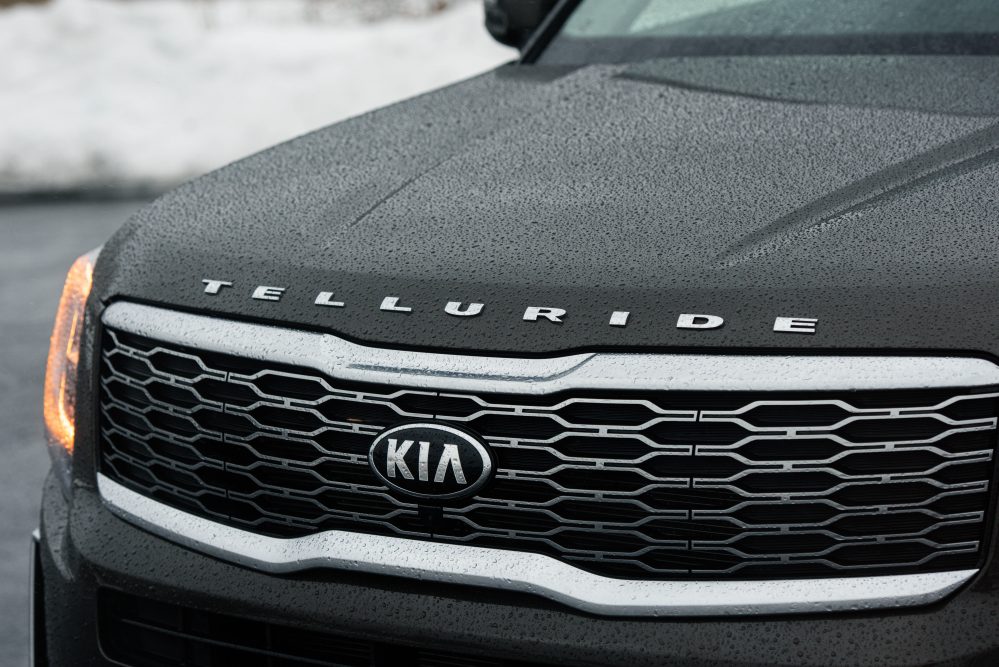 Pricing kicks off at $47,000 for an already well equipped SX model and tops out at $56,190 for a fully spec’d Telluride SXL like the one you see here. 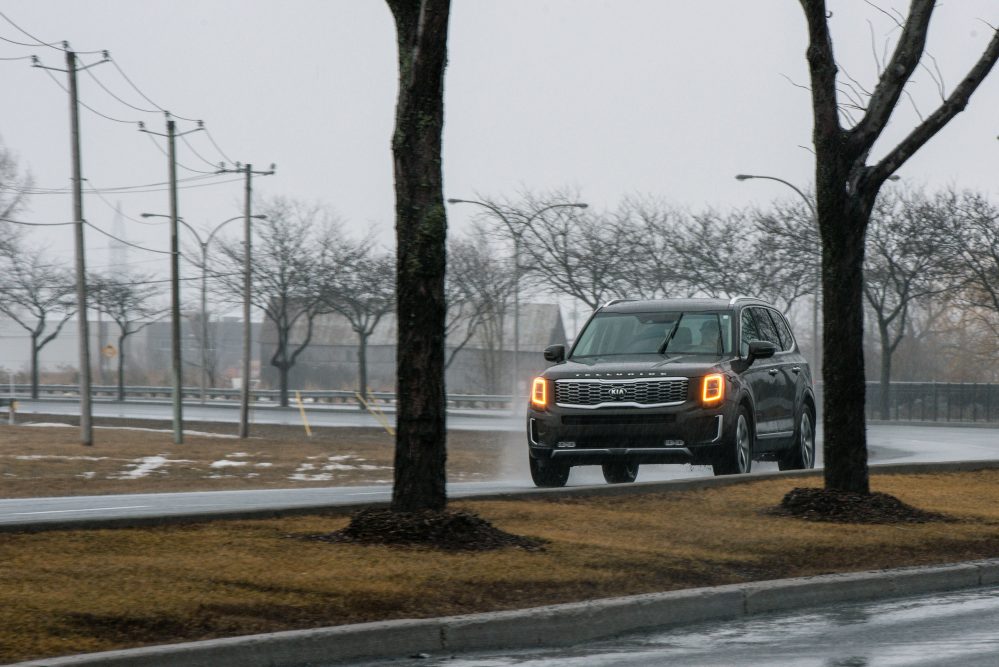 As you know, I drive a lot of cars. So for a vehicle to impress me the moment I strap myself in, it needs to be damn good. I’ve explained this in the past in my review of the last-generation Honda Accord. If I get out of an expensive, premium vehicle and sit inside a mainstream model right after, and I’m pleased with what I see, it’s generally a sign that the car is very good.

That’s exactly how I felt when I drove the 2020 Kia Telluride immediately after ripping it in the Mercedes-AMG GLC 43. I was fuckin’ impressed. 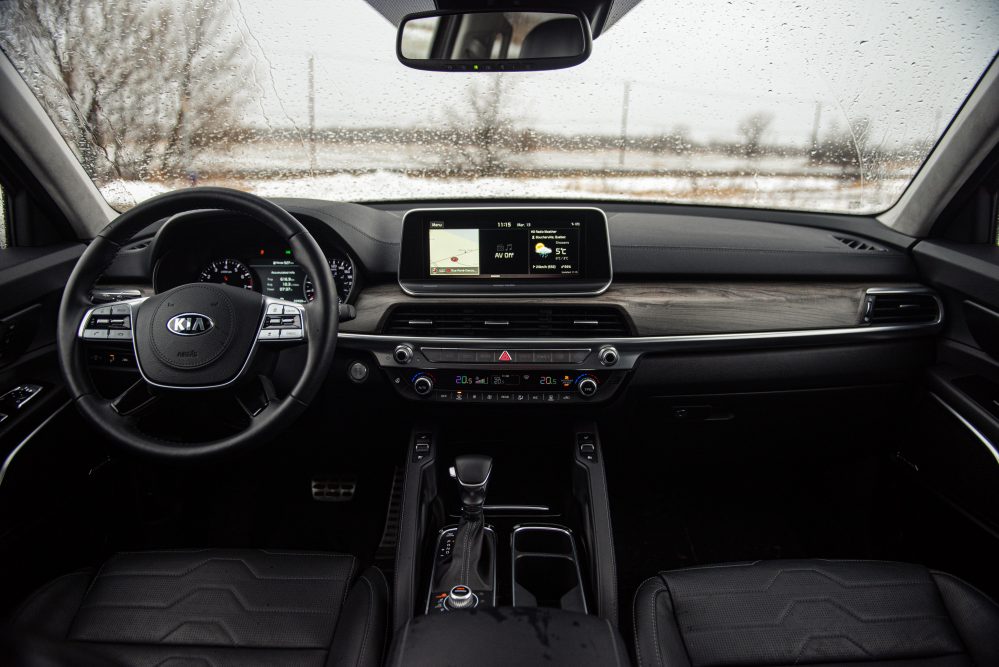 Of course, the Telluride is nothing like that Mercedes-Benz. It isn’t as quick, nor loud nor luxurious inside. But it’s just as well put together. The immediate standout feature is how refined and mature the Telluride feels, especially considering how much it costs. It never feels cheap per say. Build quality is bang on. 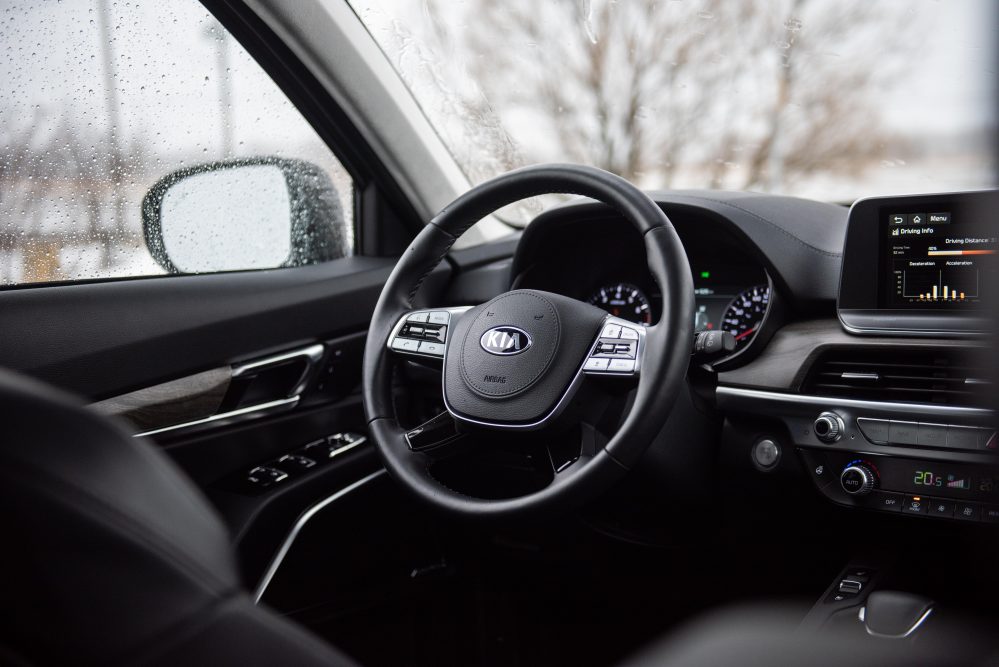 The entire dashboard is covered in this neat textured fake wood trim. You know it’s fake, but it looks so good you want to believe it’s real. Same for overall cabin materials. Everything is soft to the touch and pleasing to look at. There’s very little sign of cost cutting in there, allowing this SUV to appear more expensive than it is. 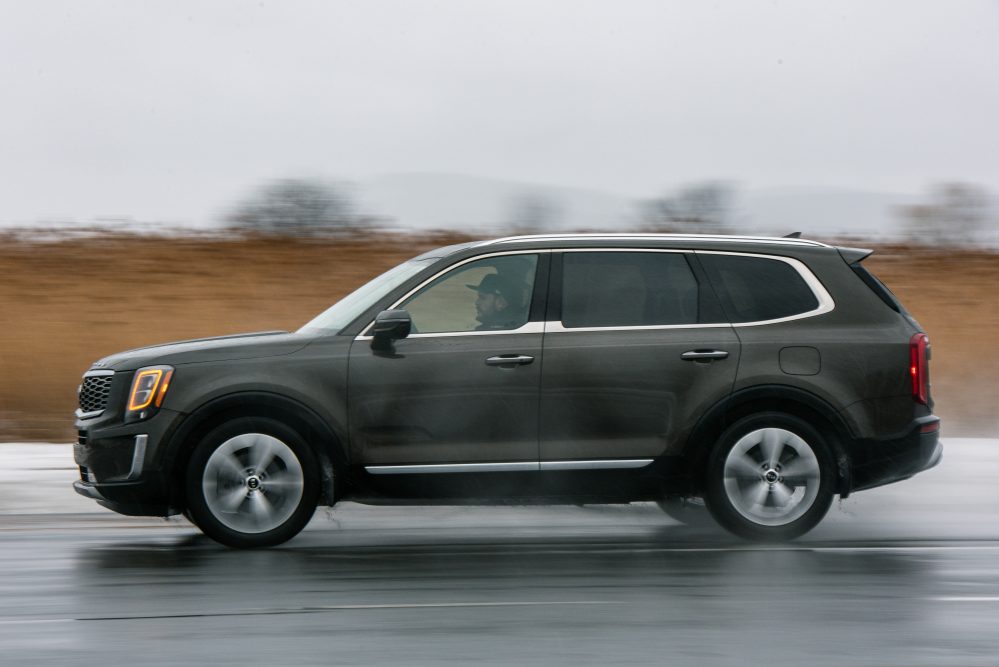 Then there’s the way it rides, which shocked me by how smooth and rock-solid it felt on beaten spring roads. The Telluride isn’t fast. It’s actually slower off the line than competing vehicles like a Honda Pilot or even a Toyota Highlander. But its V6 engine is like velvet and sends glorious intake snarls through the cabin. What the Telluride loses in agility it makes up for it in a serene and cushy ride. It just feels so relaxed and confident on the road that it instantly makes you feel secure behind the wheel. 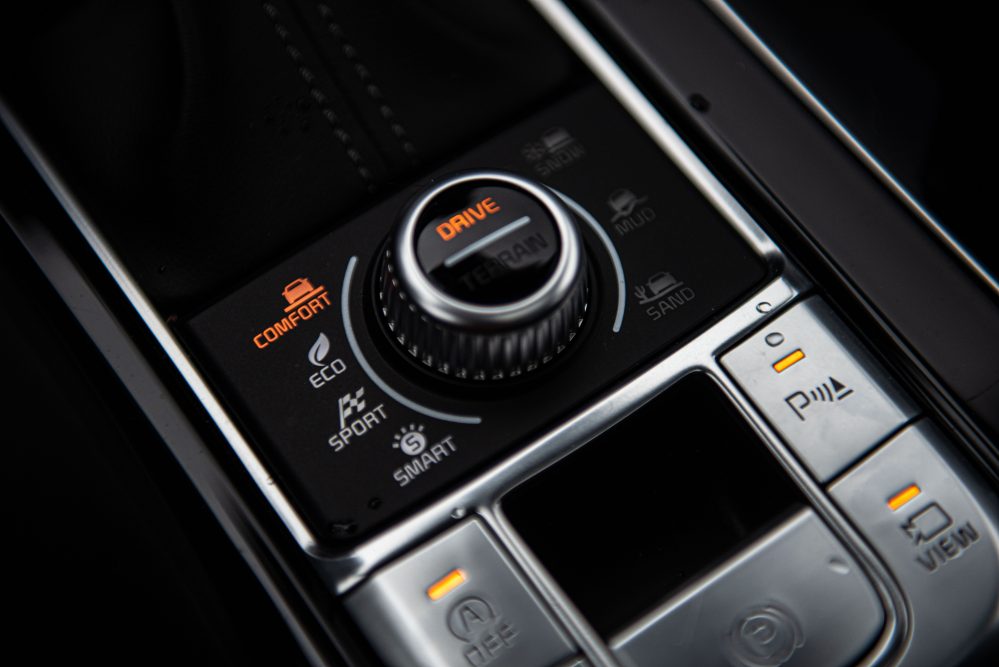 It’s  the same story for the eight-speed automatic transmission. It just works, no matter which drive mode you’re in. That said, Eco mode remains lethargic and rather useless. I could barely get my fuel consumption average underneath the 12L/100 km mark during my week with the thing. I’ve seen some three-row crossovers do much better. 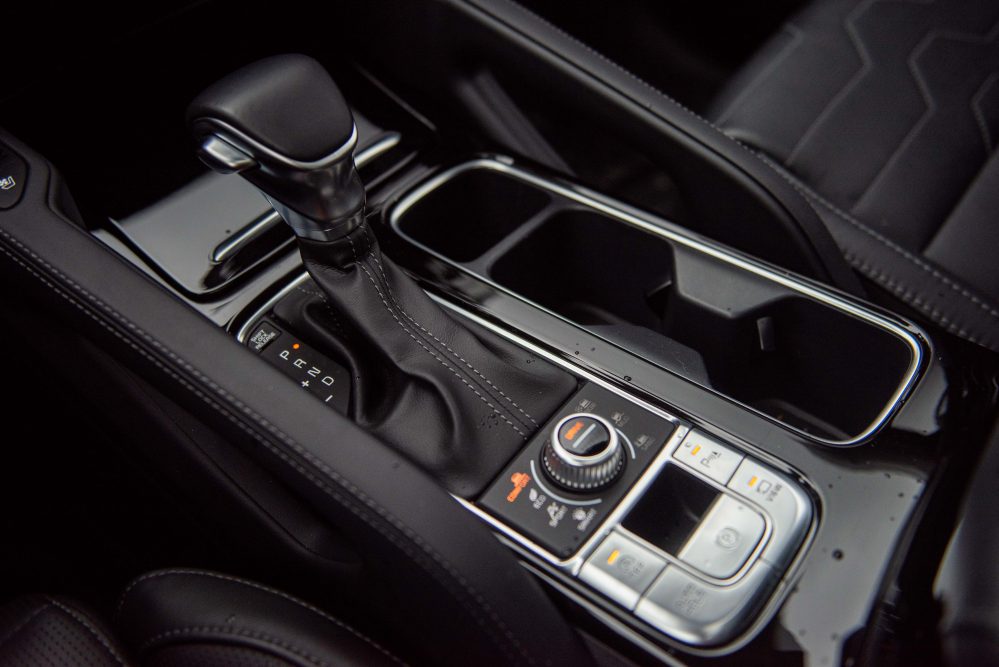 Where the Telluride shine tall over the segment is in its cabin room and overall common sense. Gauges, controls and the infotainment system are all intelligently located, clear and easy to comprehend. The touch-operated screen makes finding things easy and quick, and the physical controls are enjoyable when wearing a pair of gloves. 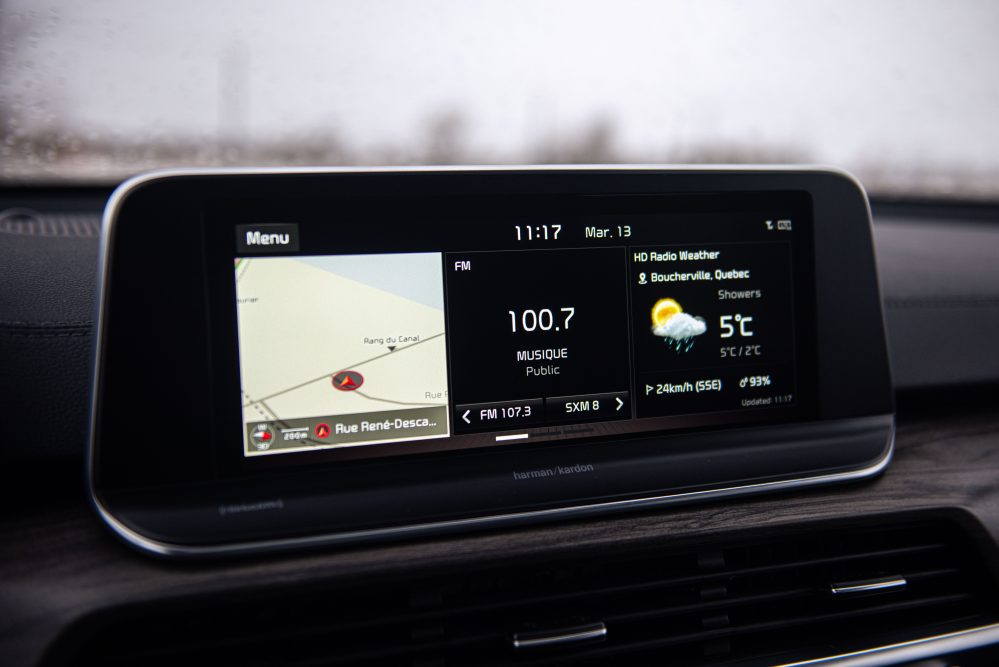 It’s essentially the same system found in a Stinger, or even a Genesis G70, but that’s fine, because it works like a charm. Some carmakers – I’m looking at your Honda – should actually use it as a benchmark. USB ports are located on the rear of the front seats for rear passengers to conveniently connect their devices, and even the third row gets its own set of two ports, so you’re sure the kids will leave you alone during those long roadtrips. 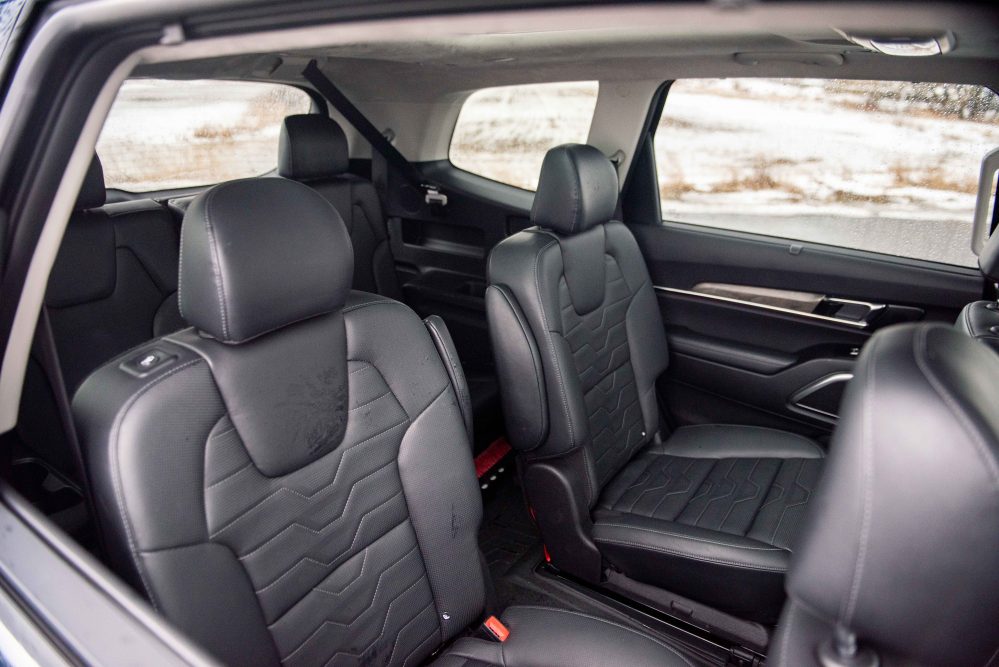 Unfortunately, those rear seats are a tight fit, especially for a big guy like me, which is ironic considering how massing this vehicle is. I recommend reserving them for children. The problem resides in the high floor which forces you to have your knees up in your face. The first row is totally fine though. 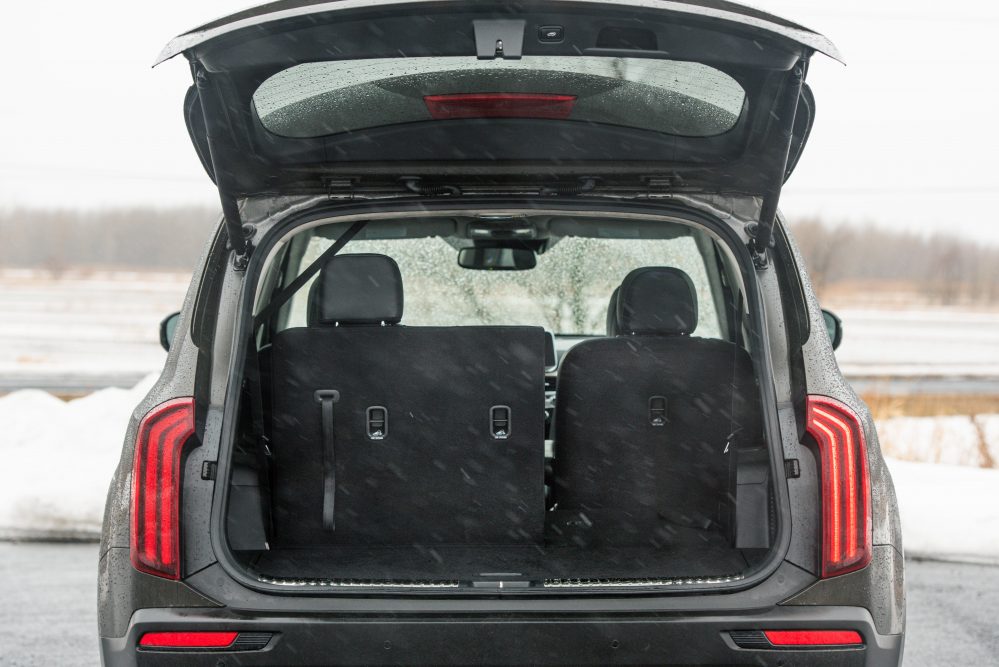 Finally there’s the reason why you buy a midsize SUV in the first place: cargo space. And in that respect, the 2020 Kia Telluride doesn’t disappoint. As a matter of fact, with up to 2,463 liters of available room with all seats folded down, this Kia is actually roomier than everything in its class. Only the ginormous Volkswagen Atlas (2,741 liters) has a larger cargo hold. 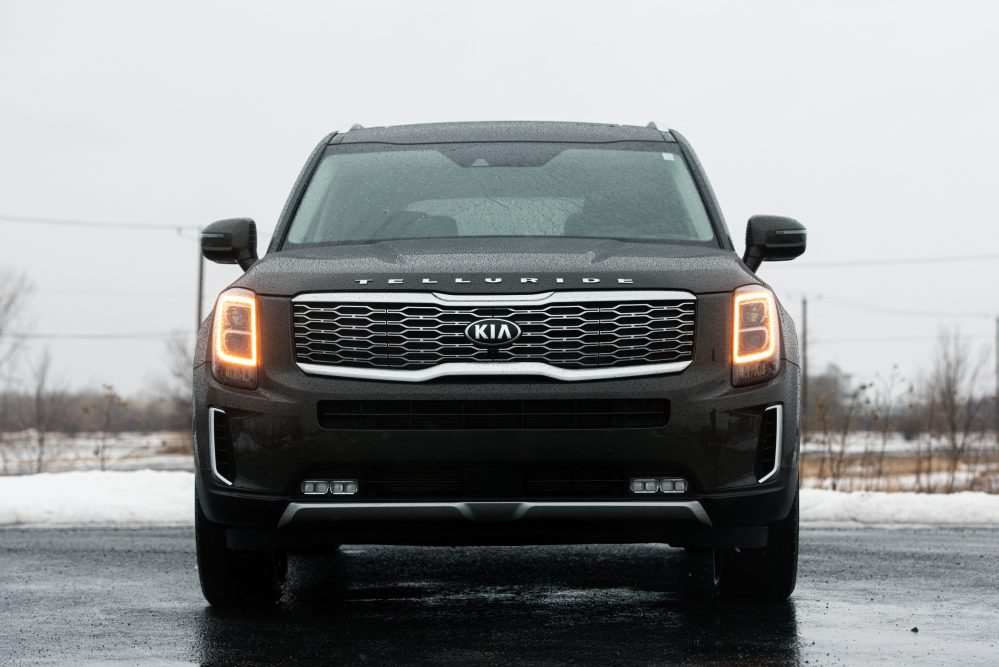 At this point I know what you’re probably thinking: “why on Earth is Clavey driving a big-ass SUV and not a sports car?” Simply because this is what people buy and each time I receive a message on Facebook it’s to ask me about another god-awful contraption like this one.

Except this time around, the vehicle in question is actually great and worth your hard-earned money. Three years ago I would have never recommended a Kia over a Honda, yet, here we are, doing exactly that. 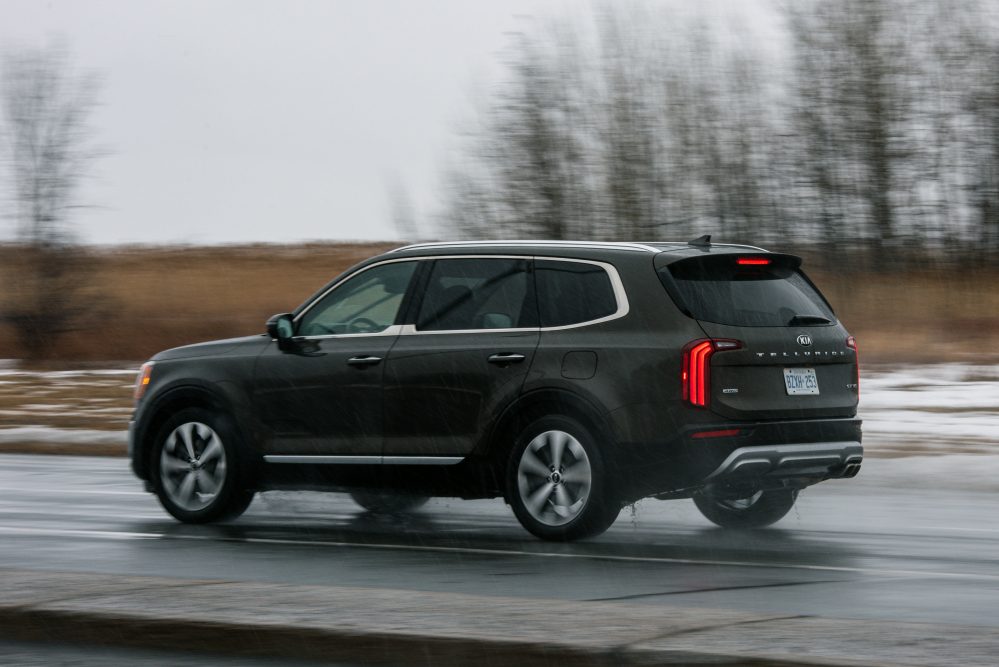 Perhaps it’s because I’m getting old, or because I’ve confined indoors for almost a month due to this stupid COVID-19 virus, but the 2020 Kia Telluride is so good I’m starting to wonder why I’d get anything Japanese over it. It’s the kind of vehicle I’d get for myself if I were locked at home with a swarm of kids during a pandemic. I’d ask them all to hop in and I’d take them for a long ride. And I’m sure they’d enjoy it as much as I would.