2022 Lexus LX600 F Sport Is On An Entirely Different Planet 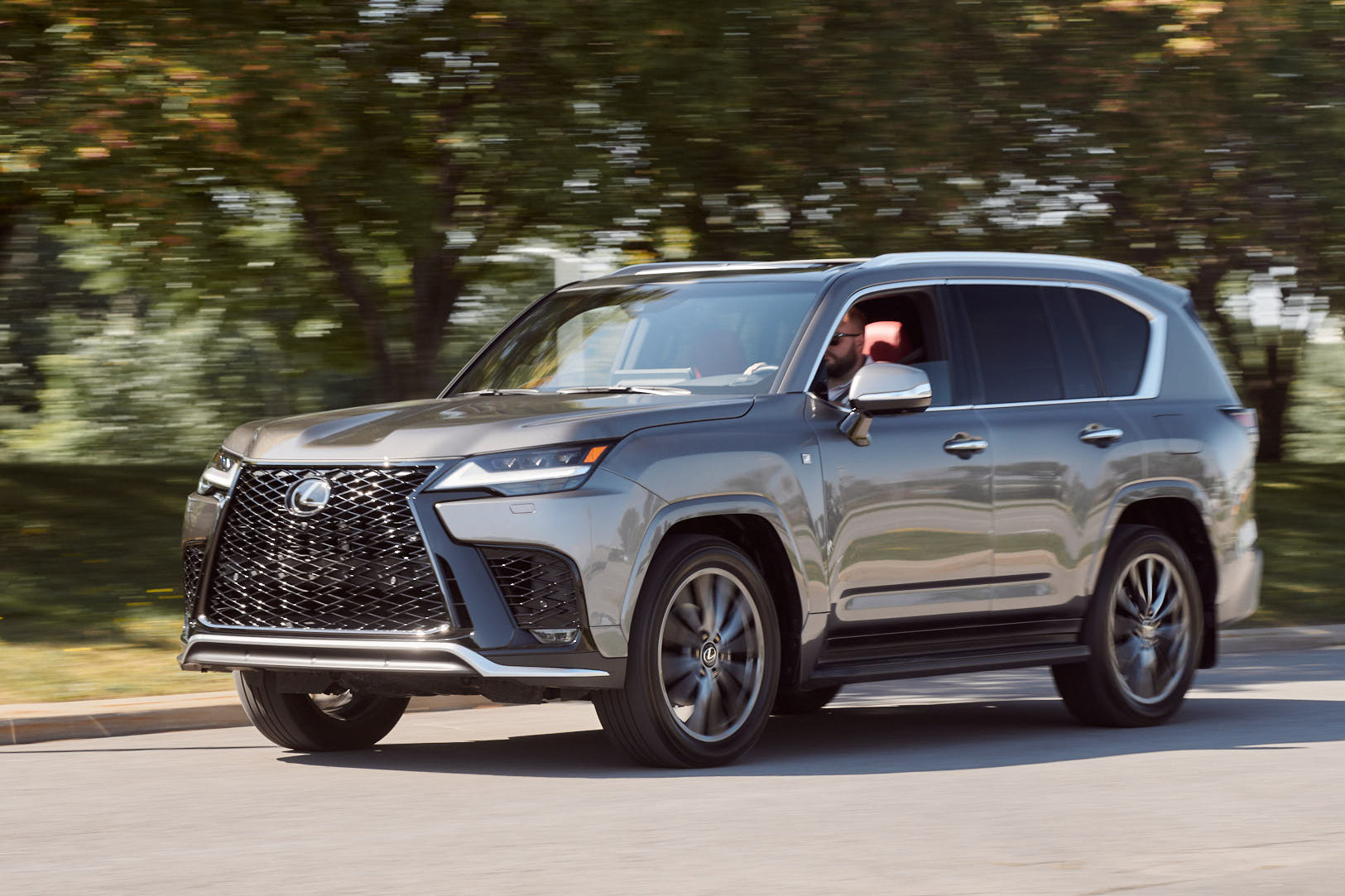 The 2022 Lexus LX600 is all-new after being unchanged for over a decade. And that’s odd, because from a sales standpoint, Lexus is seriously lagging being its American competitors in this segment. Why on Earth would Toyota even approve a new-generation LX on our market? My guess is it doesn’t even care that the LX is competitive or not. Truth is, this thing is on an entirely different planet. 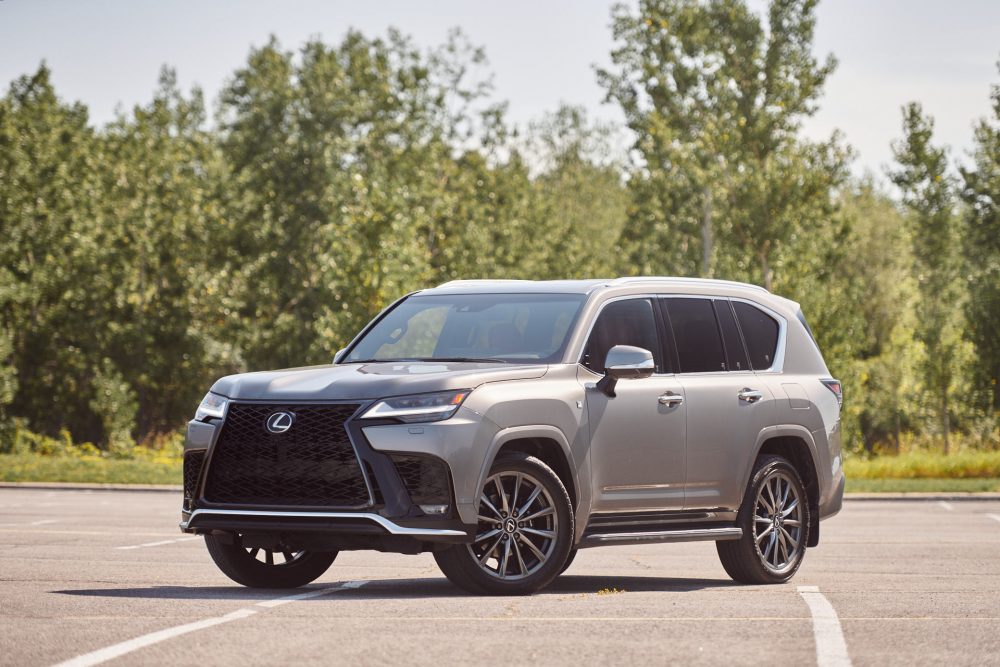 Lexus doesn’t do much to hide the fact that the 2022 Lexus LX600 is essentially a rebadged Toyota Land Cruiser with added luxury amenities. That’s not entirely a bad thing considering a Cadillac Escalade is give or take a luxed up GMC Yukon. I mean, underneath the Jeep Grand Wagoneer sits an old Ram 1500. 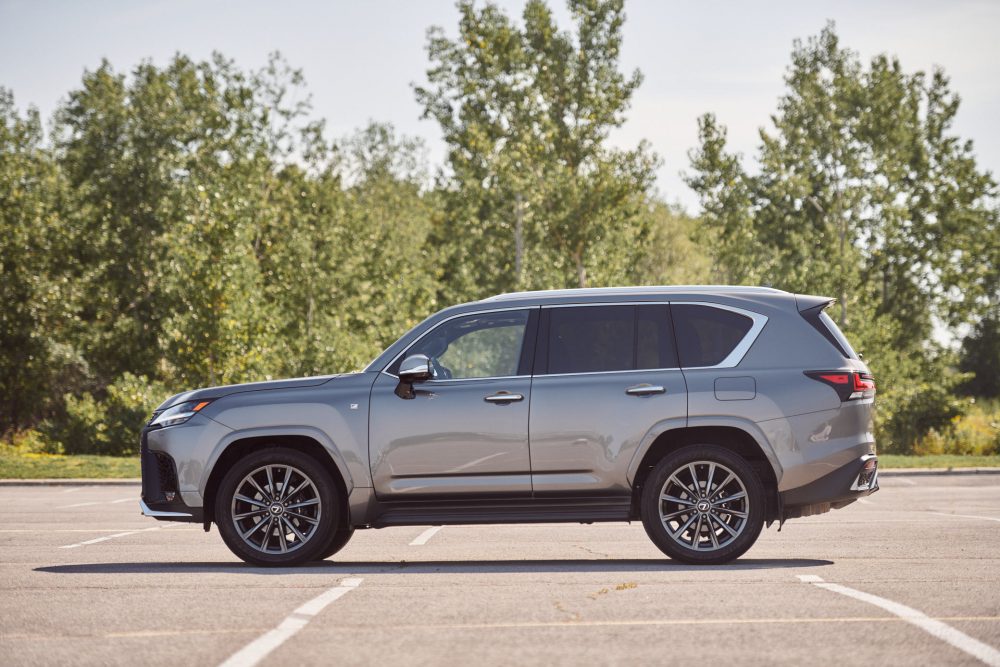 The good news for this LX is that it rides on Toyota’s new TNGA-F body on frame truck architecture, shared with, yes, the Land Cruiser, but also the new Tundra and Sequoia. This gives it stiffer bones, a completely revised suspension geometry and improved crash protection. However, Lexus retains the Land Cruiser’s solid rear axle, contrary to the Sequoia which now gets a fully independent setup. 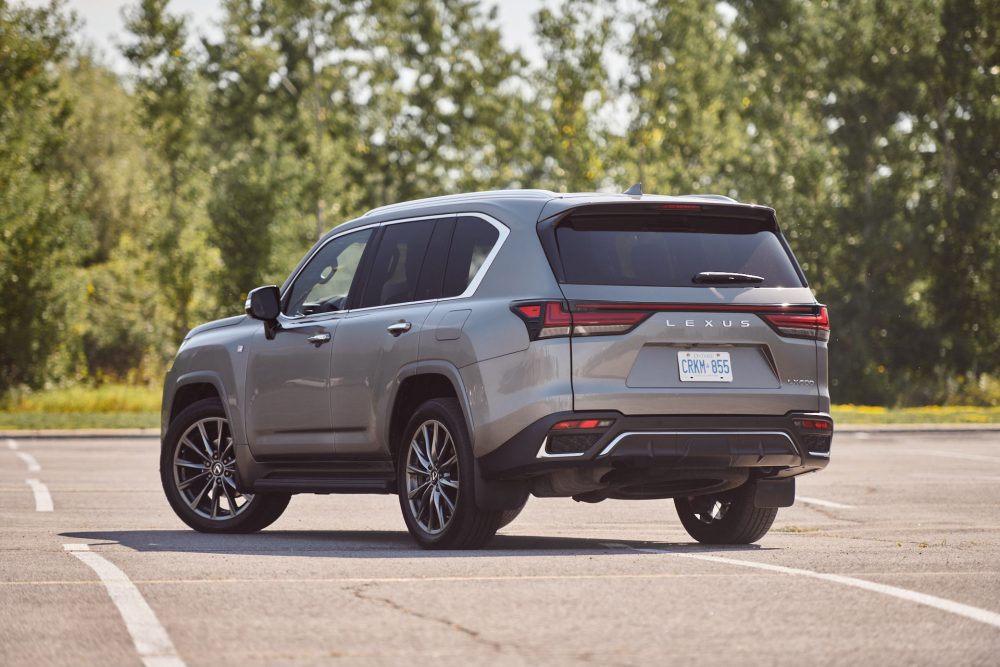 Why you ask? Because the Lexus LX is essentially an off-road vehicle wearing a tux, meaning comparing it to other full-size luxury SUVs is kind of missing the point. If anything, this is more of a direct competitor to the Mercedes-Benz G Class or even the Land Rover Range Rover. 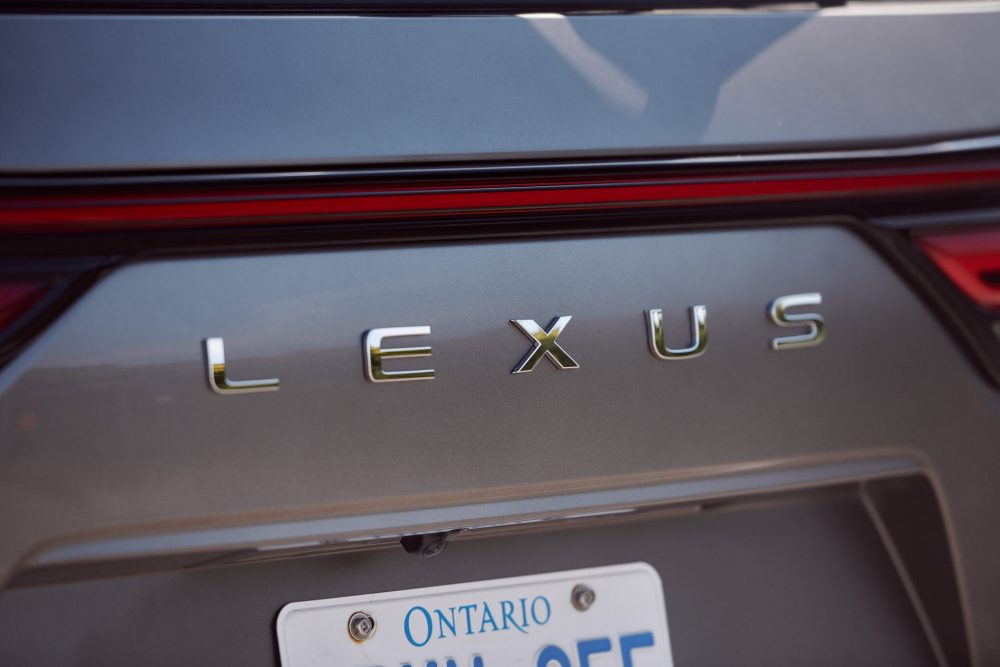 The LX’s new platform also allows it to inherit Toyota’s twin-turbocharged 3.5-liter V6, essentially the same unit that also powers the Lexus LS500. It’s good here for 409 horsepower and 479 lb-ft of torque, eclipsing the old V8 along the way. That engine is mated to an all-new ten-speed automatic transmission. 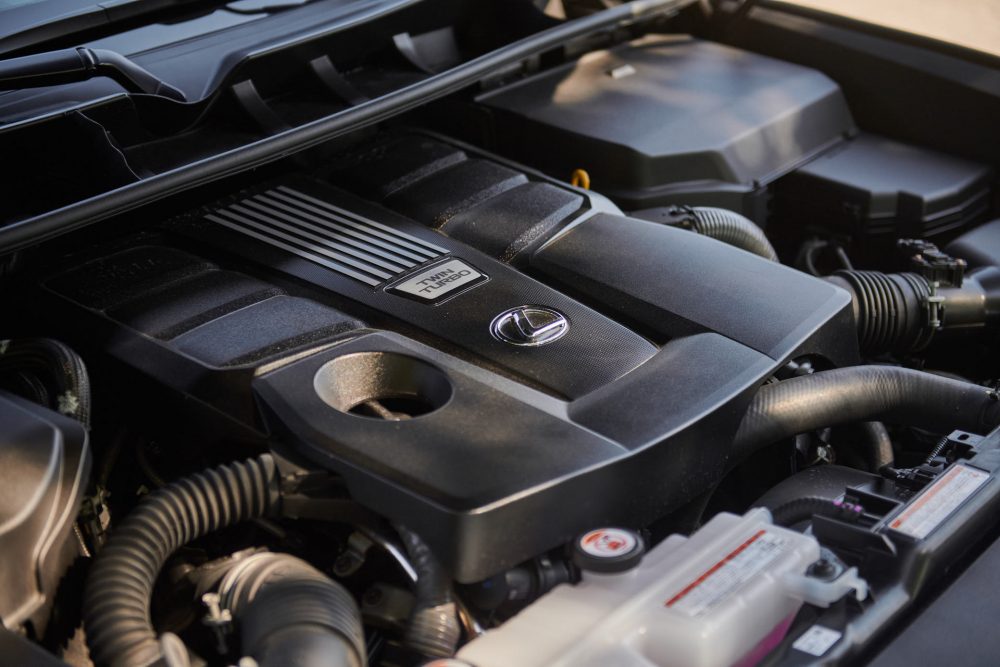 Perhaps where the 2022 Lexus LX600 is even more an anomaly, is in its pricing strategy. These things are…not cheap. As a matter of fact, when well equipped, this can quickly become Lexus’ most expensive vehicle, reaching well over the $150,000 price mark. Base models kick off at an already steep $106,950. My tester, an F Sport model, which is the first of many available packages (a $13,000 extra) stickered at a whopping $122,875. That’s about the same price as a well equipped Cadillac Escalade. 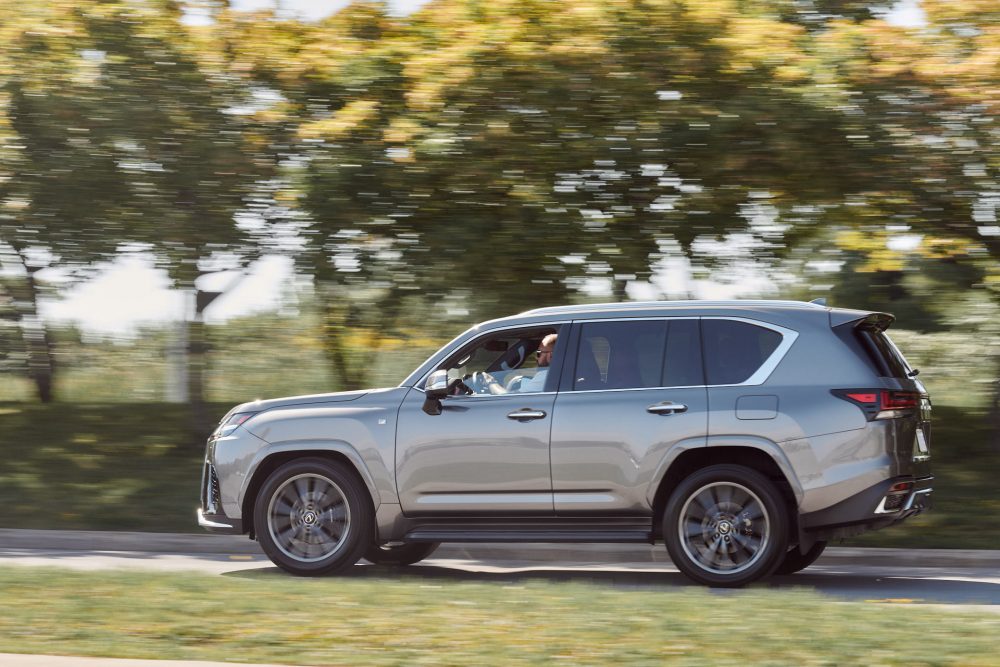 Even if comes with a solid rear axle, I was expecting the LX600 to ride a lot smoother than its predecessor. I mean, it does, until it doesn’t. Yes, it feels a lot more mature, sophisticated and softer on a bumper road. It also helped that my tester had adaptive dampers to set things up according to my liking. 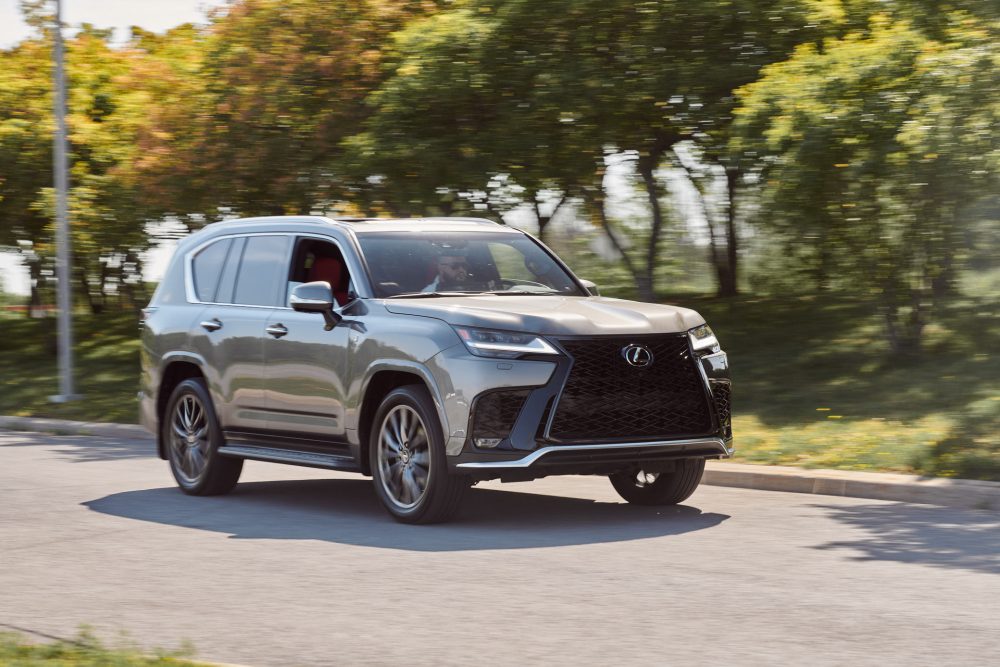 But it’s always very bouncy and top-heavy, with massive body roll the moment you attempt to enter a corner too quickly. Mind you, these things were never designed to carve canyons, but next to an Escalade or even a Lincoln Navigator, this doesn’t feel modern at all. 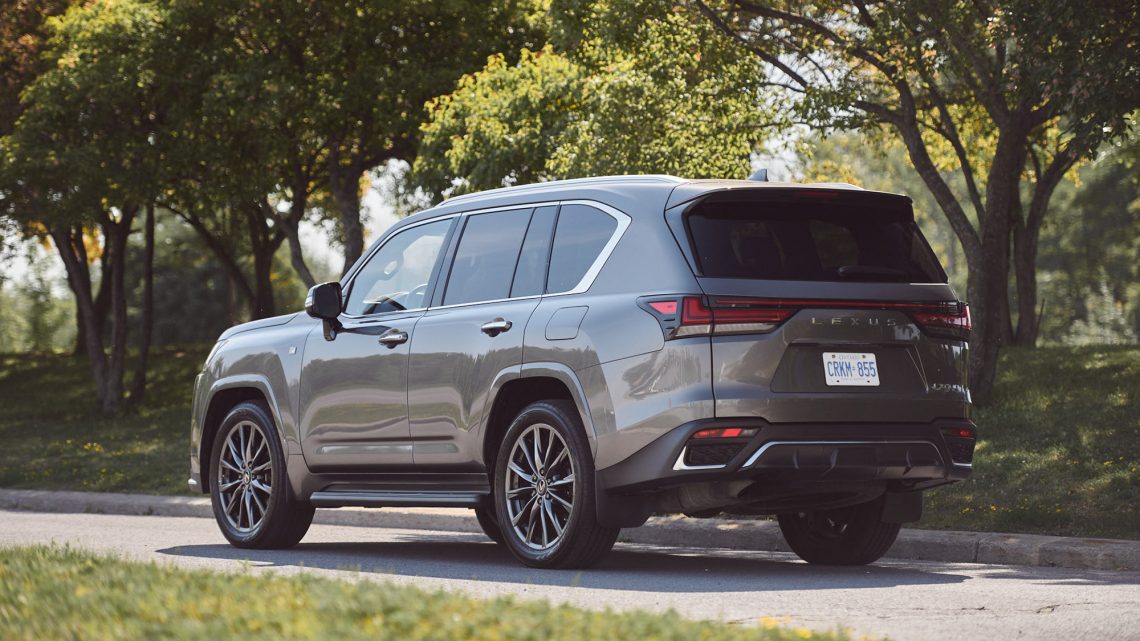 Aside from excessive body motions, the LX600 definitely feels more truckish than its main American rivals. That’s expected given its off-road pretentions. Tired of getting my ass beaten around in a $120,000 luxury SUV, I therefore took the LX out into a light trail to see how it performs in an adventure-oriented context. 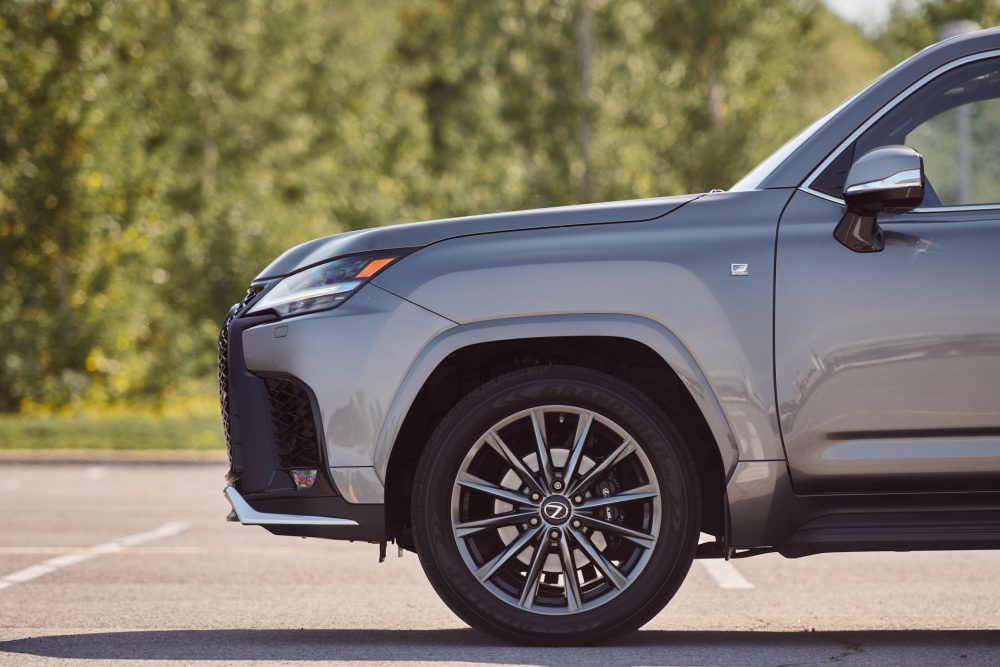 Yes, the LX600 is a highly capable machine in the trails. Lexus puts at your disposal a full array of go-anywhere technology to help you crawl your way out of a muddy chasm. Things like a rear locking differential, a 4×4 Low system and an automatic Crawl Control feature that limits wheelspin to get you out of the thick stuff. And it all operates so seamlessly that conquering mother nature becomes a walk in the park.

Hence why I firmly believe the LX cannot be compared to anything else on the road, because while it lacks the competition’s finesse out there on the tarmac, it completely pulverizes it in an open trail. 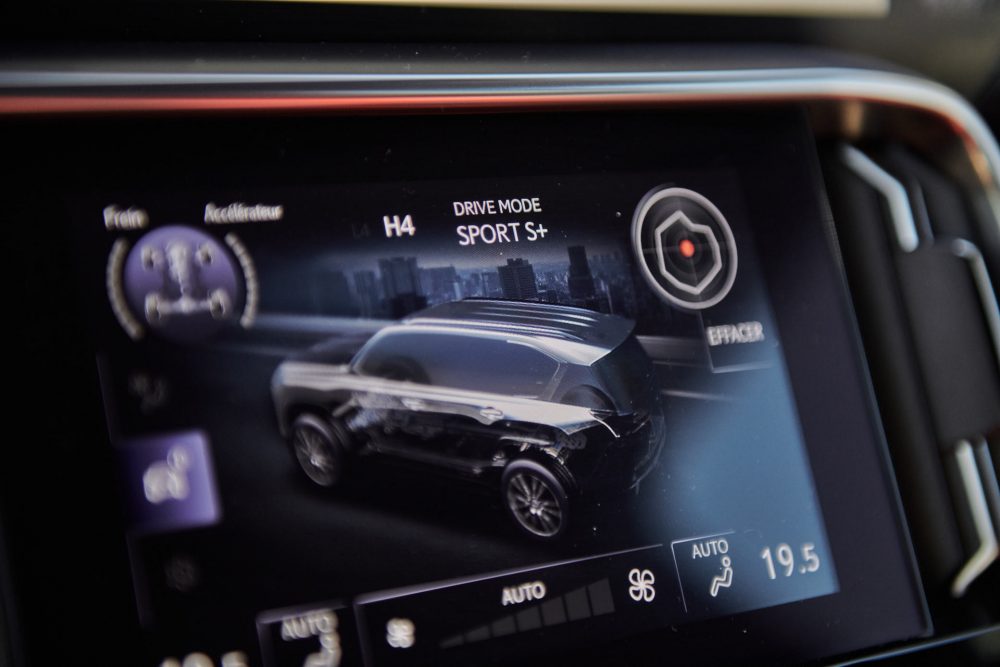 The drivetrain works fine, in the sense that it picks this big guy up quickly and with little hesitation. Yes, there are the traditional delays caused by too many gears and two turbochargers, but once everything activates, the LX600 is quick off the line, smooth and highly efficient considering its size. I recorded a decent 11.6L/100 km fuel consumption average while I had it. 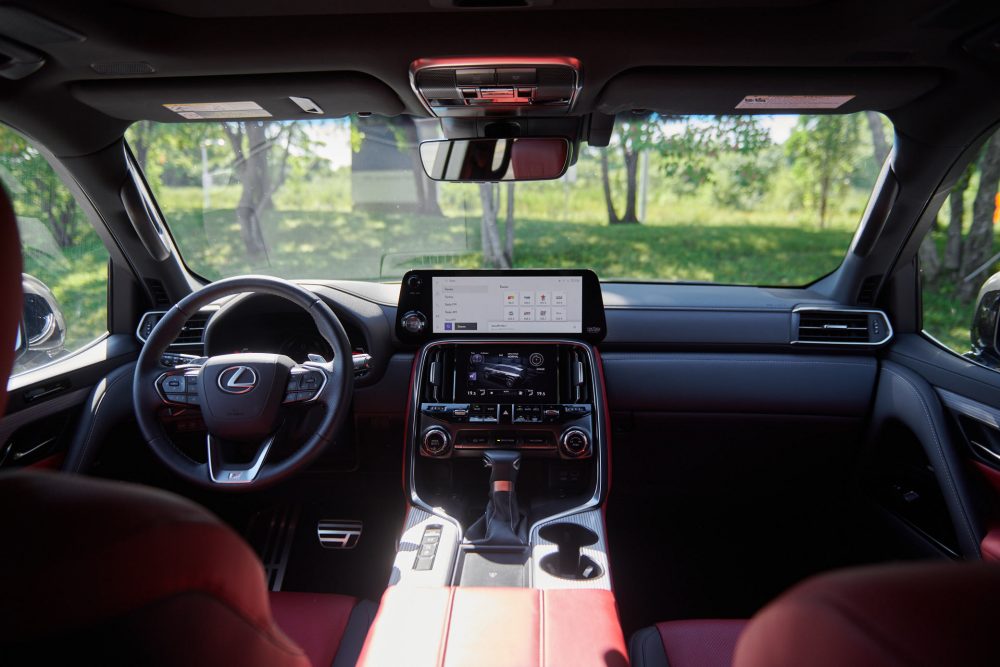 And perhaps where Lexus’ big bruiser impresses the most is in the overall build quality of the damn thing. Lexus leaves no stone unturned: from thick paint to very tight panel gaps, everything on this big rig reassures you that it’ll last forever. Step inside, and the F Sport package greets you with a stylish two-tone red on black interior. 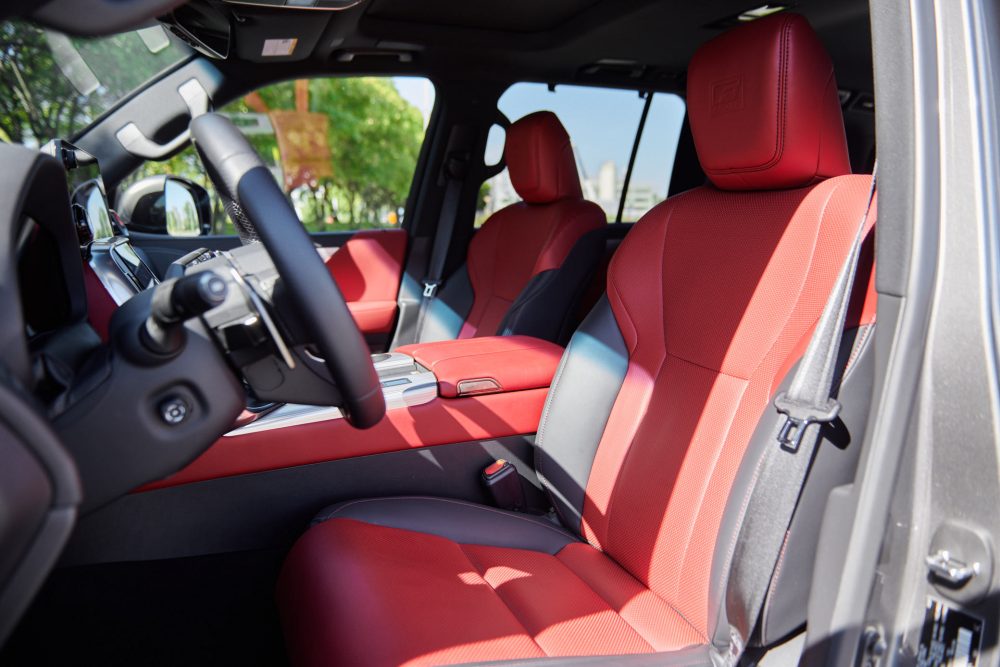 There’s leather everywhere; on the dash, the door inserts and the center console. Even the headliner is made up of a neat leatherette texture that feels rich and expensive. 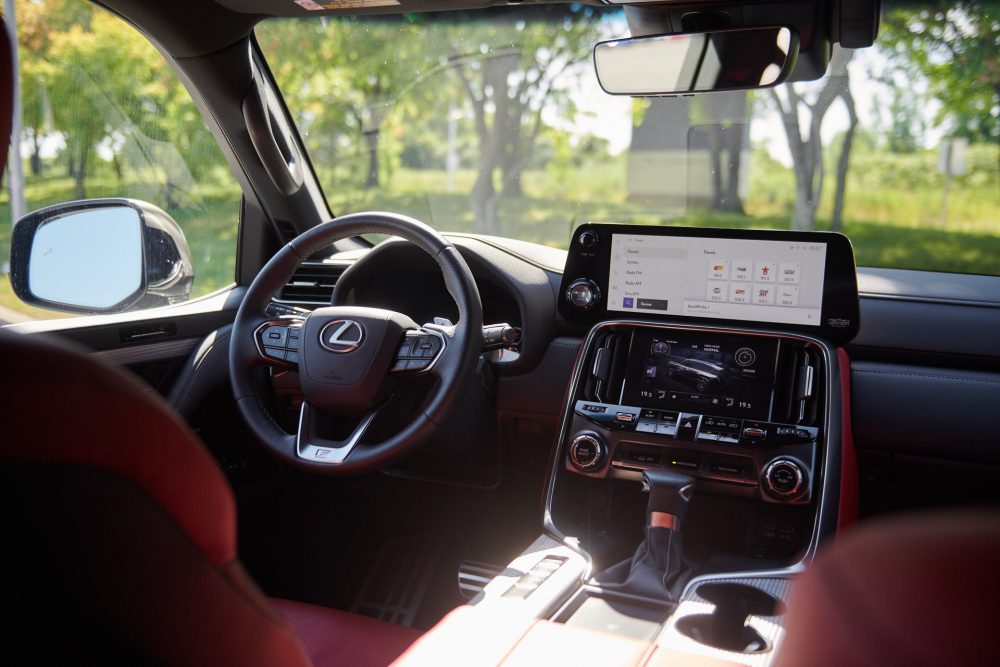 Lexus gives you two screens to play with. The bottom one mainly displays information for off-roading or climate control settings, while the top one serves as an infotainment screen. It also displays what the front camera is seeing when setting the truck in 4×4 Low, a handy feature when venturing out in the wilderness. 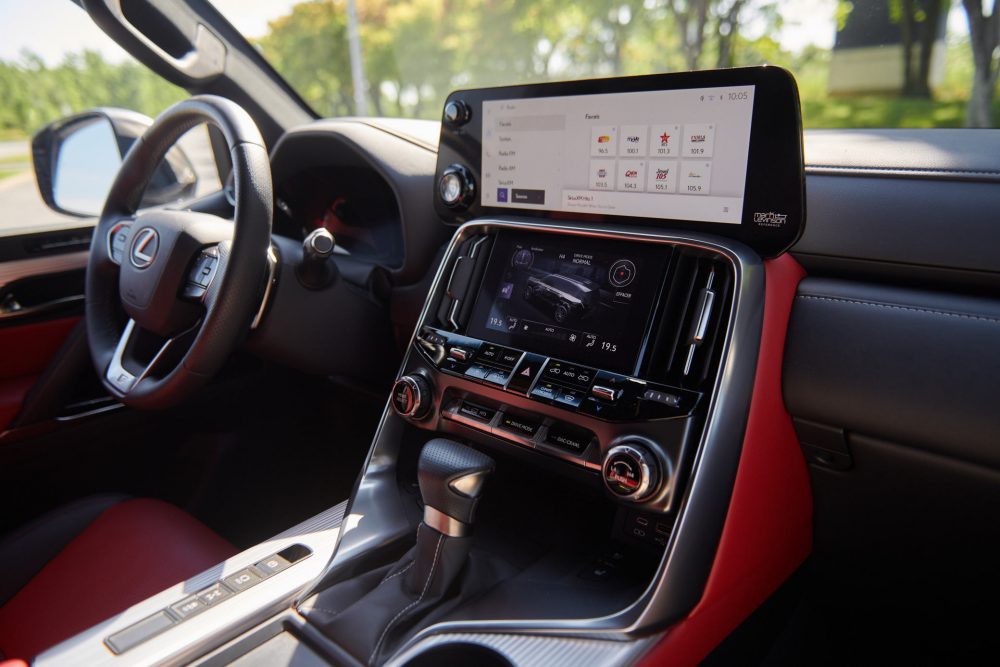 Speaking of infotainment systems: Lexus completely overhauled it, which feels fantastic. Gone is the god-awful and totally useless trackpad. It’s now been replaced by a much more user-friendly touch-operated system. It’s now fast to respond, easy to comprehend and beautifully styled, albeit loaded with menus and features. Lexus even goes down the German route by offering its driver ambient lighting customization, a fun feature, but I do wish Lexus would have taken it a bit further. 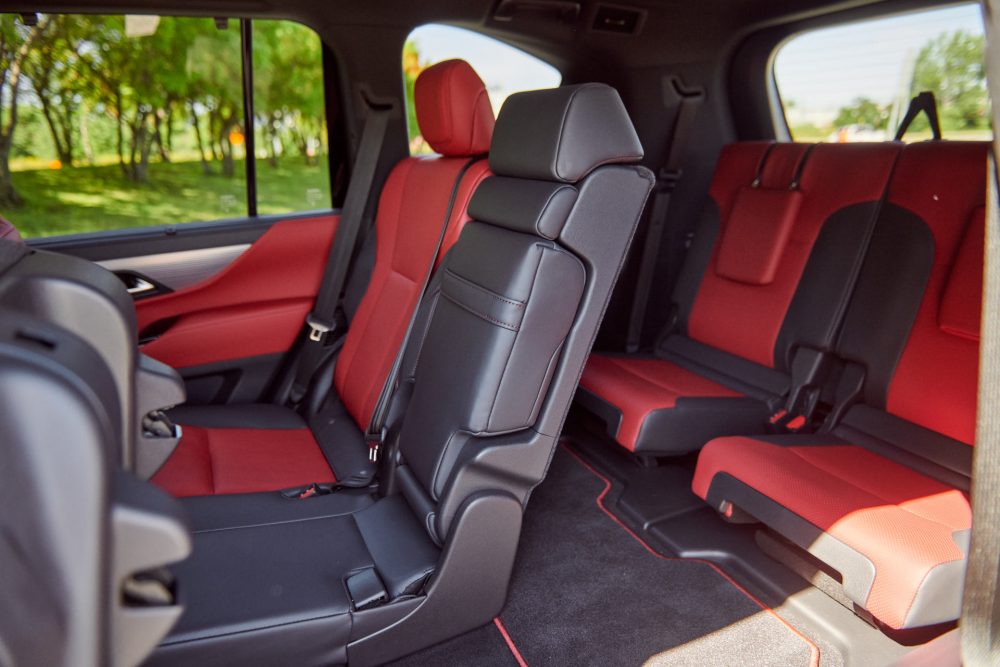 In the first four seats, the Lexus LX is roomy, comfortable and wraps its occupants in luxury, craftsmanship and technology. Unfortunately, while this is technically a three-row SUV, accessing those rear seats require a slim belly and a flexible body. And once back there, adults might not enjoy having their knees kissing their forehead the entire way. It’s quite ironic considering those rear seats offer electronic adjustments and a total of 4 cup holders. 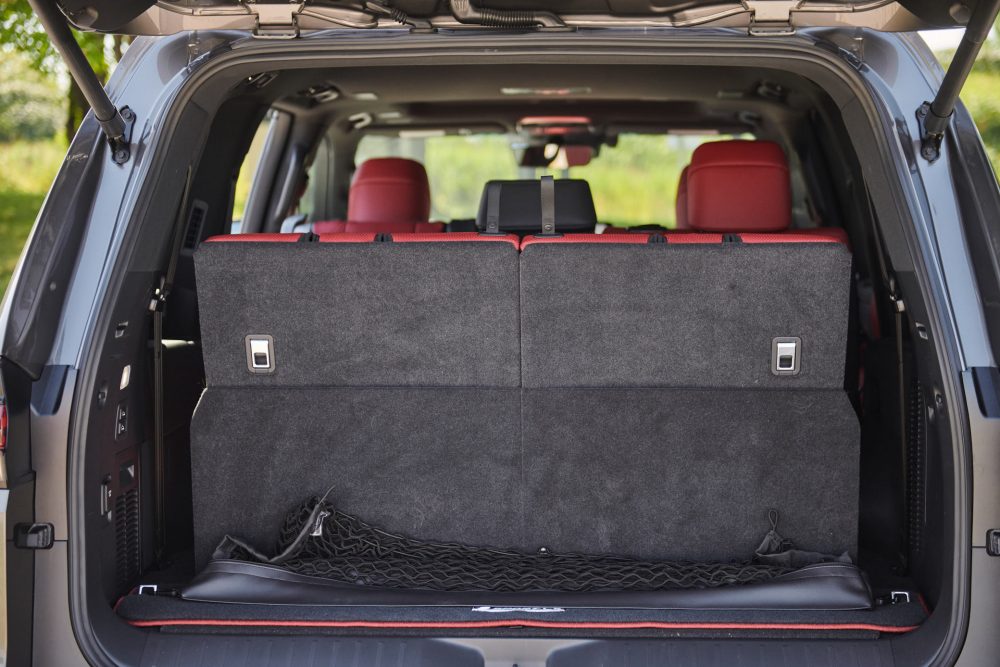 This is all due to the fact that this new LX still only comes in one wheelbase configuration, which, inevitably, impacts its total cargo space. Because of this – and the presence of a solid rear axle – the big Lexus lags behind the American competition, offering 1,812 liters with all seats folded flat. By comparison, a short wheelbase Cadillac Escalade will give way to 3,426 liters, while a Navigator stands at 2,927 liters. 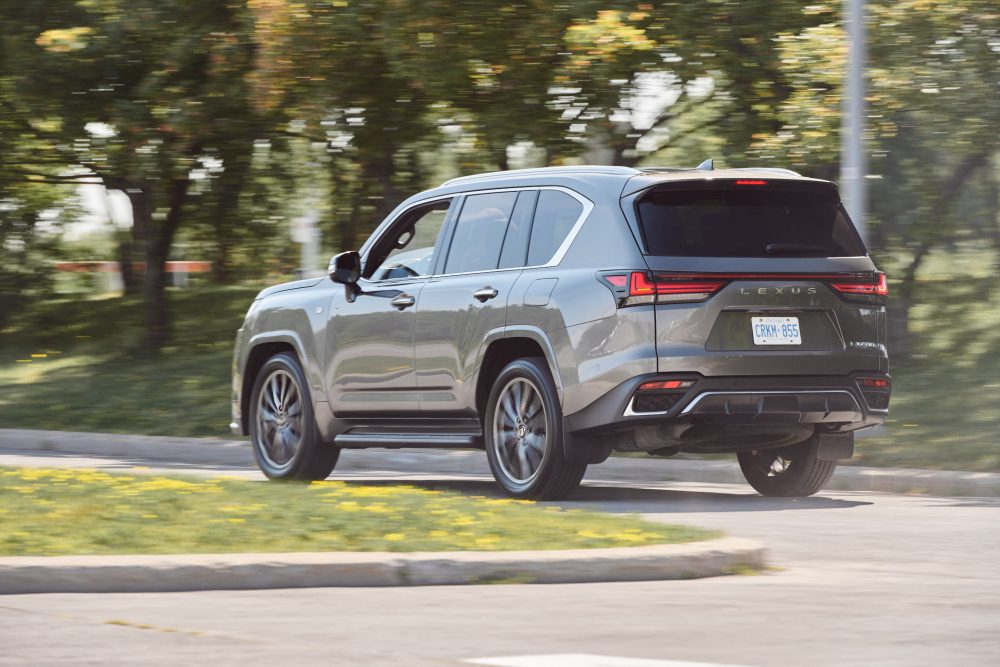 But none of that will matter for the 2022 Lexus LX600 target buyer. People who buy these things don’t exactly compare them to an Escalade or a Navigator anyway. What they want is essentially a Toyota, with luxury amenities and class-leading build quality, meaning they expect their vehicle to bring them to the moon and back while retaining a stellar resale value. In that respect, the LX600 is off to a very good start.