2020 Lincoln Aviator Proves Lincoln Is On The Right Track 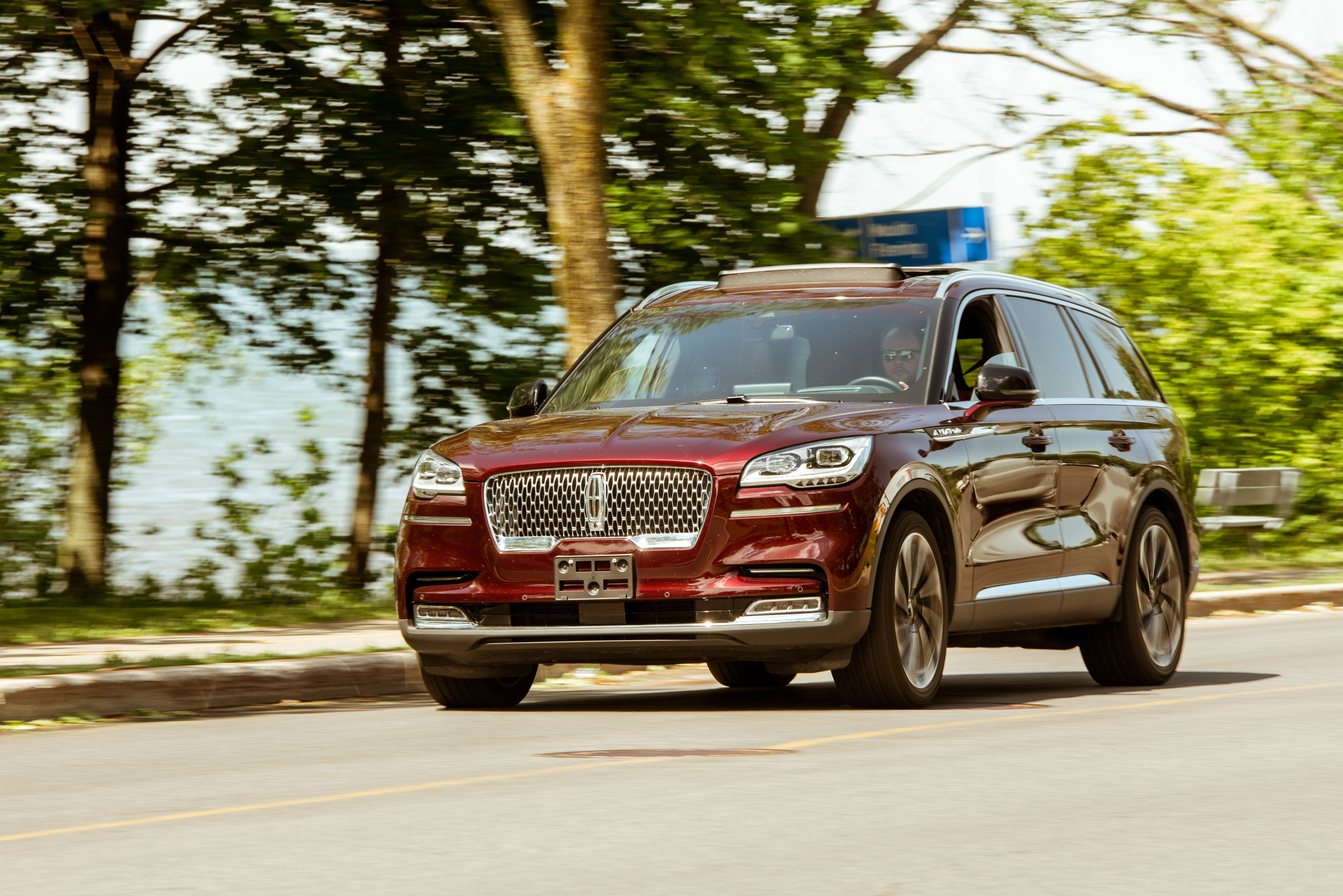 The 2020 Lincoln Aviator is probably not what you have in mind when shopping for a $75,000 luxury SUV. Yup, that’s how much this thing costs, which probably makes you wonder what you could get with a BMW or Mercedes-Benz badge for that price, right?. Fine, it’s too expensive, but at least this new Aviator does many things right. Allow me to explain. 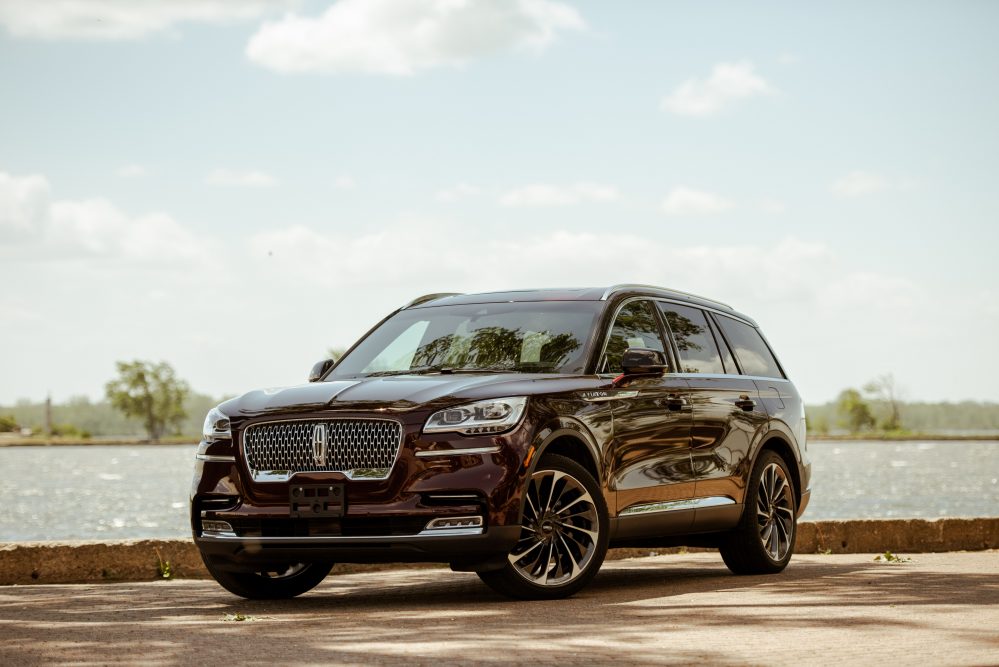 I’ll begin by saying that the current Lincoln “boat-like” design language is finally in tune with what the brand is supposed to represent. It began with the Lincoln Continental; a car I absolutely adore. Unfortunately, we found out this week that it’ll be killed off in favor of more SUVs. Go figure. 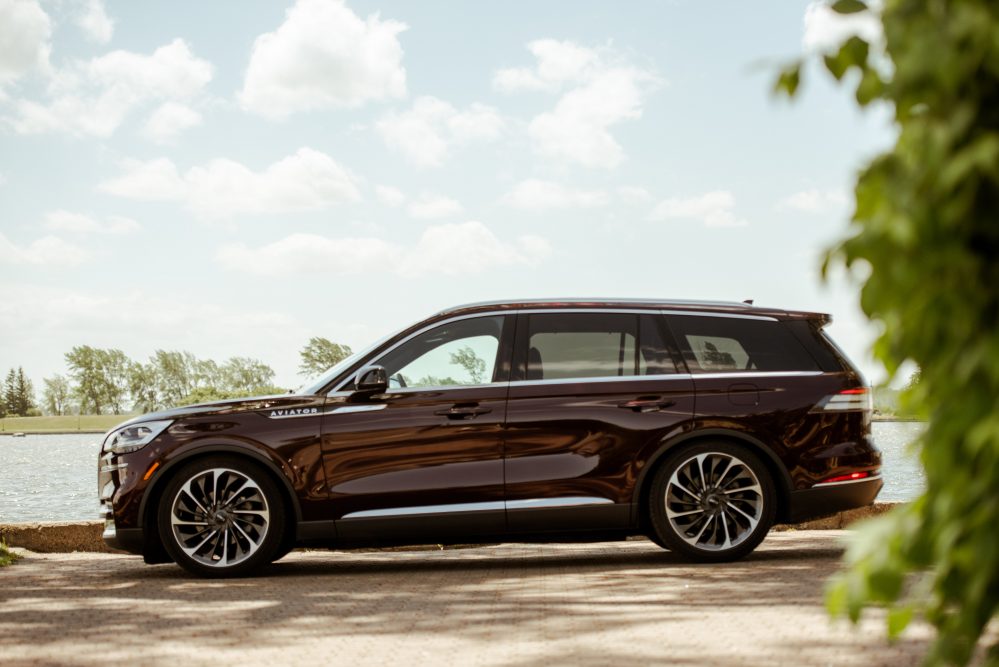 At least, the 2020 Lincoln Aviator carries over the Continental’s design torch with its art-decor retro-ish styling that hearkens back to Lincoln’s glory days of the 1960’s. There’s chrome at the proper places, a raked roof line, presence, stance and an expensive feel – everything we should expect from The Lincoln Motor Company. I’m also an absolute fan of the way it squats to full baller mode when you climb out of it, it’s just so slammed. 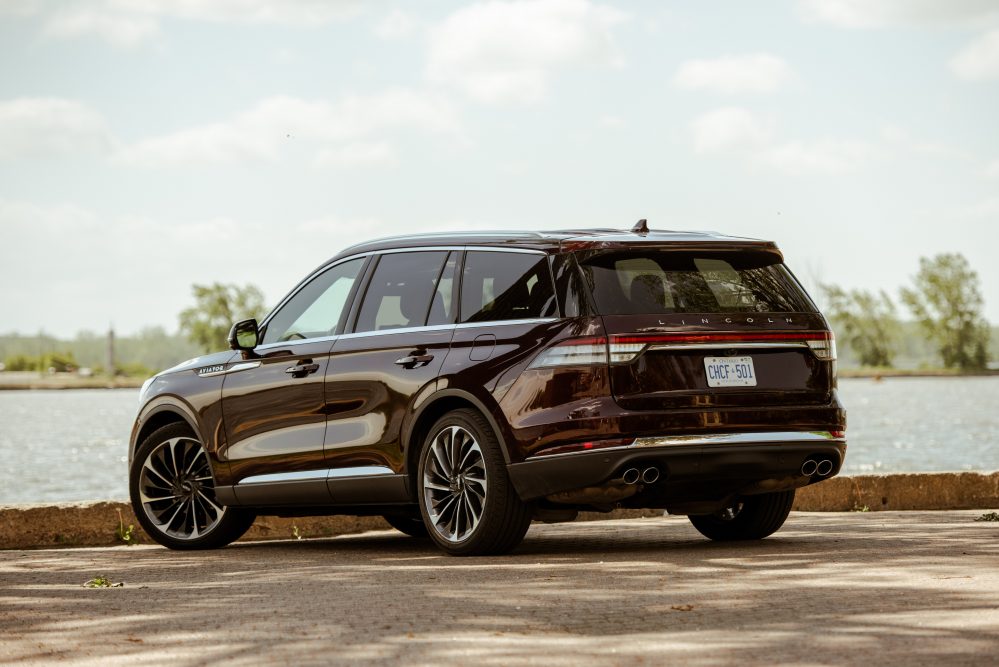 But perhaps the most important aspect of the way the Aviator looks, is that it doesn’t look too much like the Ford Explorer it’s based on, which is good news if you’re going to pay this kind of money for an American vehicle. 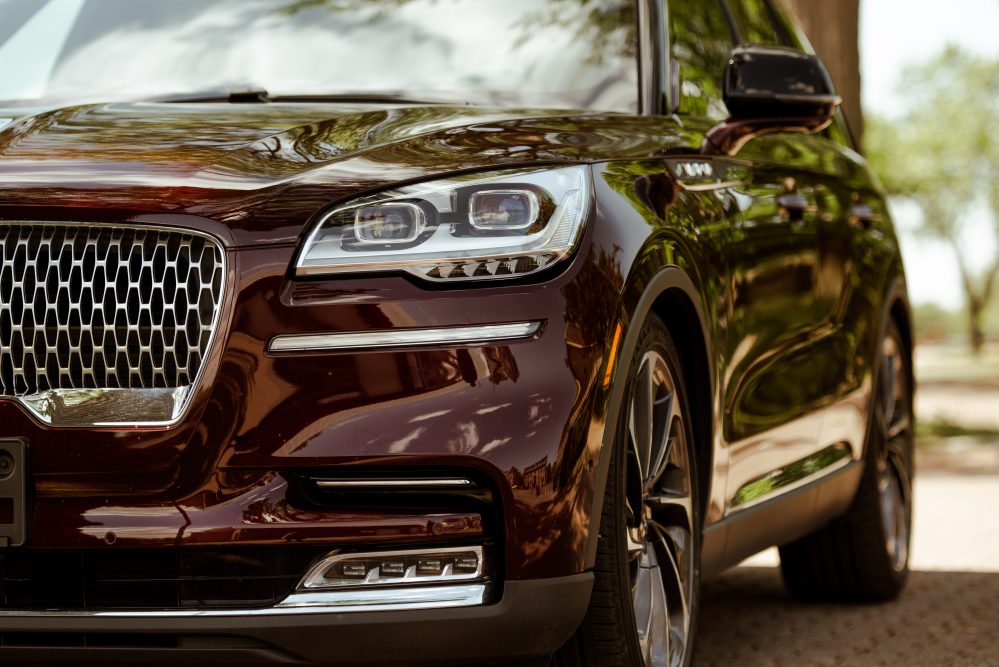 Riding on the Explorer’s rear-biased CD6 architecture, the Aviator also borrows the Explorer’s engine and transmission. All variations of the thing come standard with all-wheel-drive in Canada, with the base engine being the Explorer’s 3.0-liter twin-turbo V6. It’s good here for 400 horsepower and 415 lb-ft of torque. It’s mated to a 10-speed automatic gearbox. 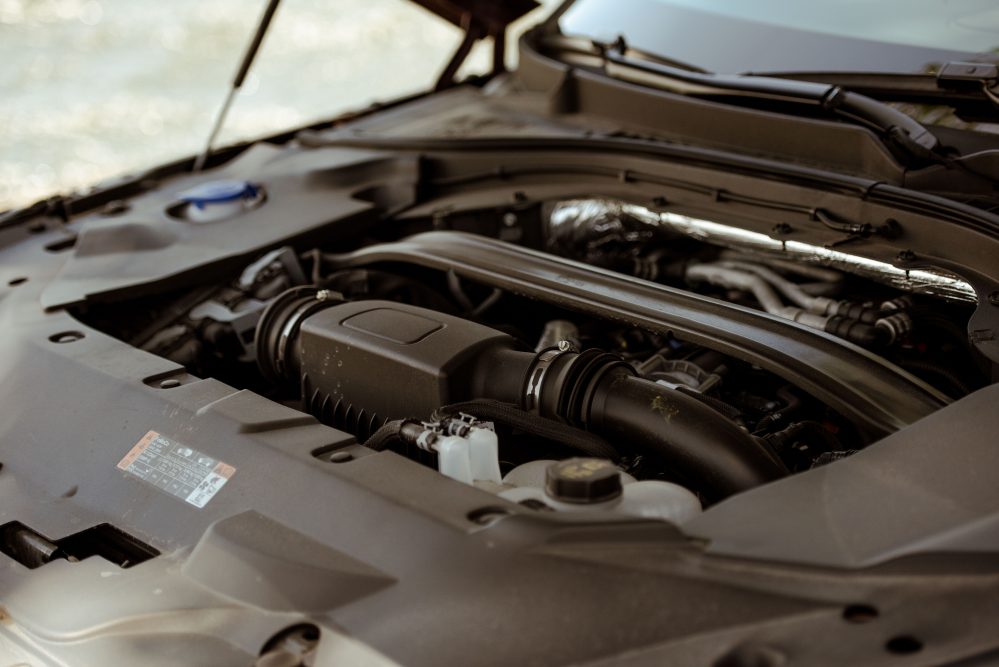 There’s also a plug-in hybrid version of that same engine, which is exclusive to the Aviator. It’s rated at an impressive 494 combined horsepower and a colossal 630 lb-ft of torque, but can only drive up to about 35 km in full electric mode, which is kind of pointless. 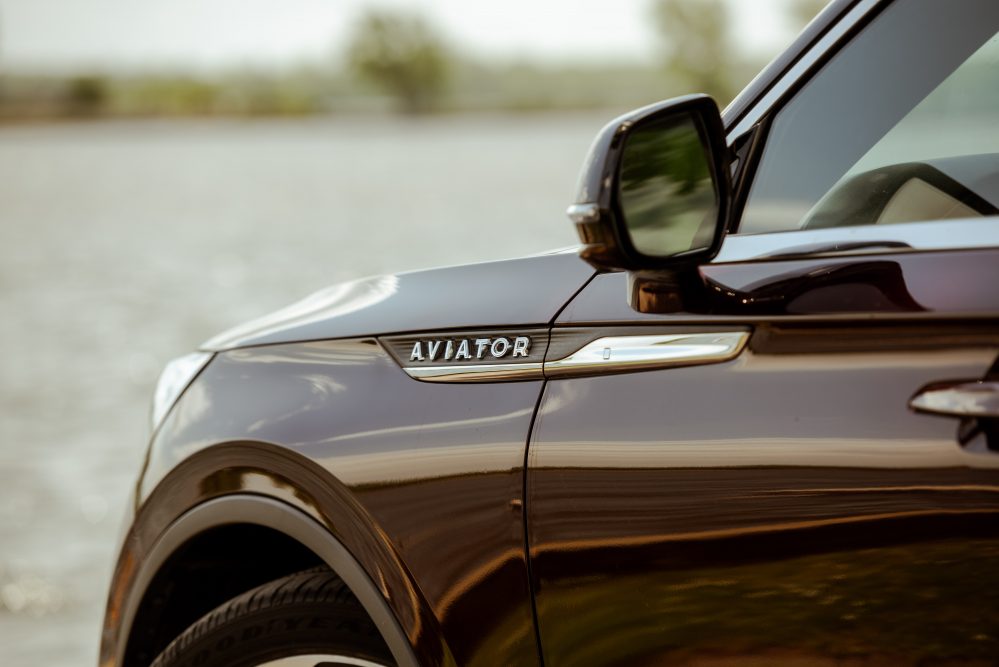 So yes, the starting MSRP for a Lincoln Aviator Reserve like the one you see here is indeed $71,250. Our trim structure here in Canada is very different than in the US where they get up to five different variations. We only get the Reserve and the top-shelf Grand Touring hybrid model. As it sits, my Aviator, which, of course, had a ton of options grafted onto it, stickered for staggering $85,850. That’s a lot of money for a dressed up Ford. 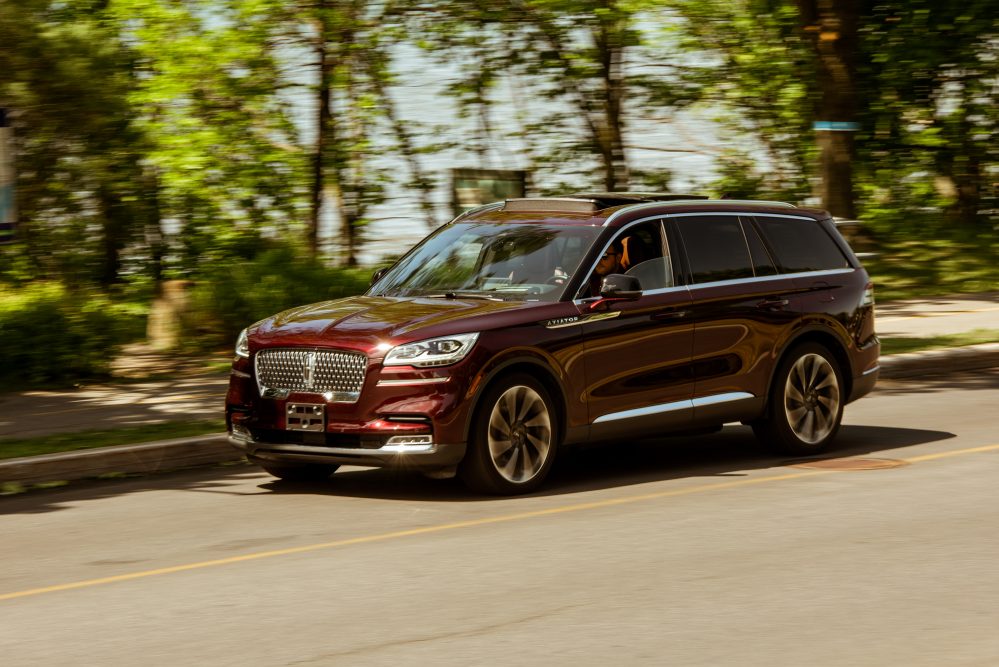 Where the 2020 Lincoln Aviator impressed me the most was in its impeccable road manners. Just like the Ford Explorer ST I drove last year, there’s a solid, planted feel in the way it takes on a corner. Yes, this is a heavy vehicle, which means you don’t necessarily feel the 400 horsepower on tap, but the Aviator glides through a corner effortlessly, the same way a large German luxury sedan would. 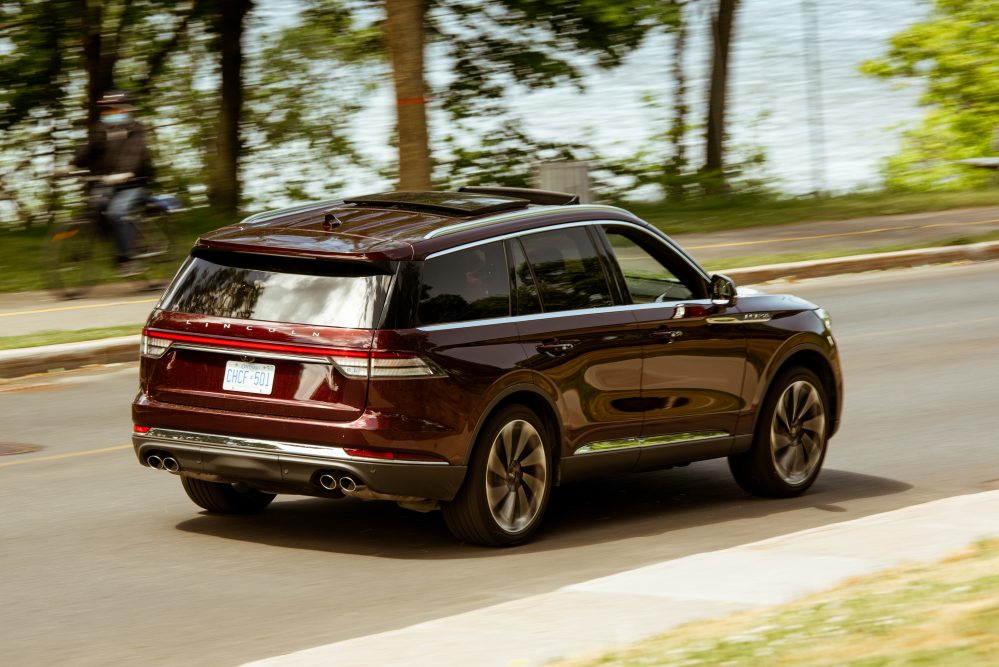 While not exactly spirited in the way it puts down power, the twin-turbo V6 does provide ample forward thrust once it gets up and goes. There’s obviously delays between the moment you smash the throttle and when it actually decides to get going – mostly due to turbo lag and ten gears to choose from -, but once the Aviator knows what it wants it’ll get to 100 km/h from a standstill in a the mid five-second bracket, which is rather decent. 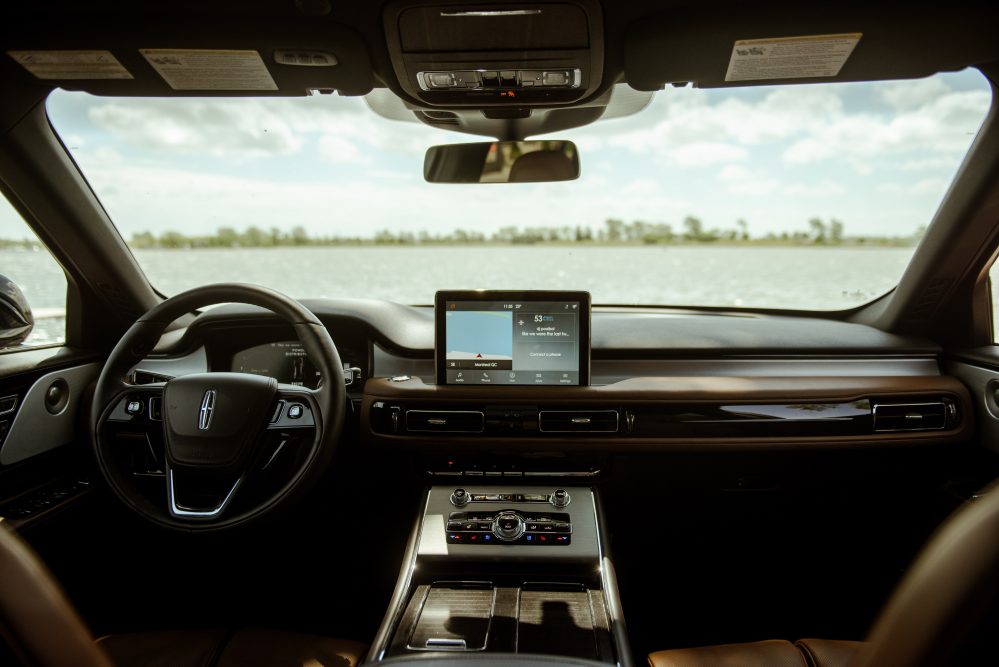 But canyon carving was never the Aviator’s raison d’être. What it misses in hair-rising performance, it makes up for  with a smooth, refined ride, quiet interior and an abundance of high-end luxury features. 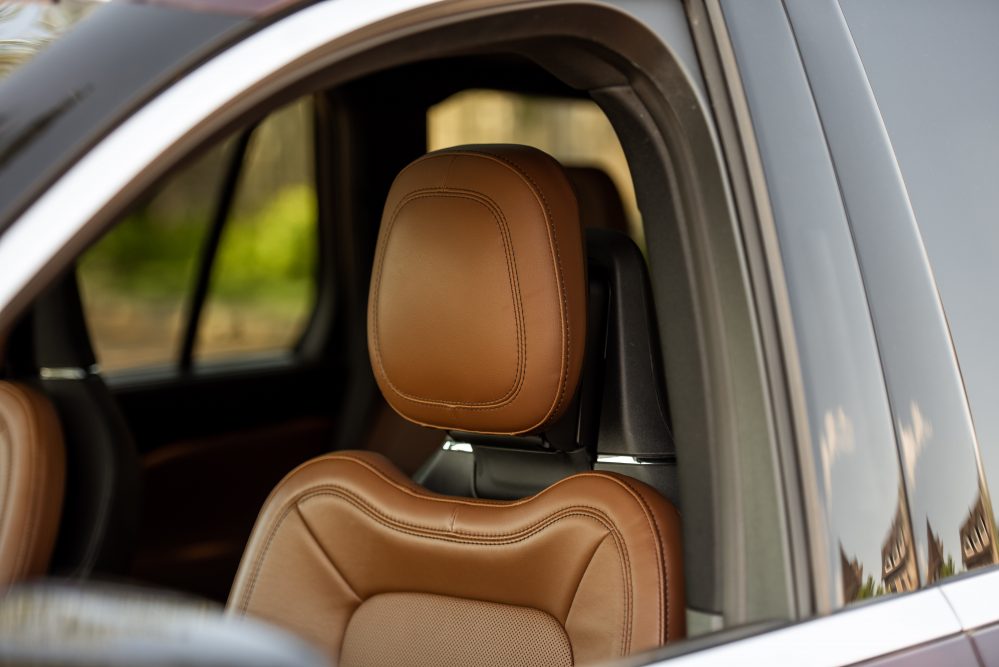 My tester was equipped with the Perfect Position 30-way self-massaging front seats. Like in the Continental, they’re not only immensely attractive, they also provide a full plethora of adjustable positions, putting them up there among the top car seats I have ever sat my ass into. 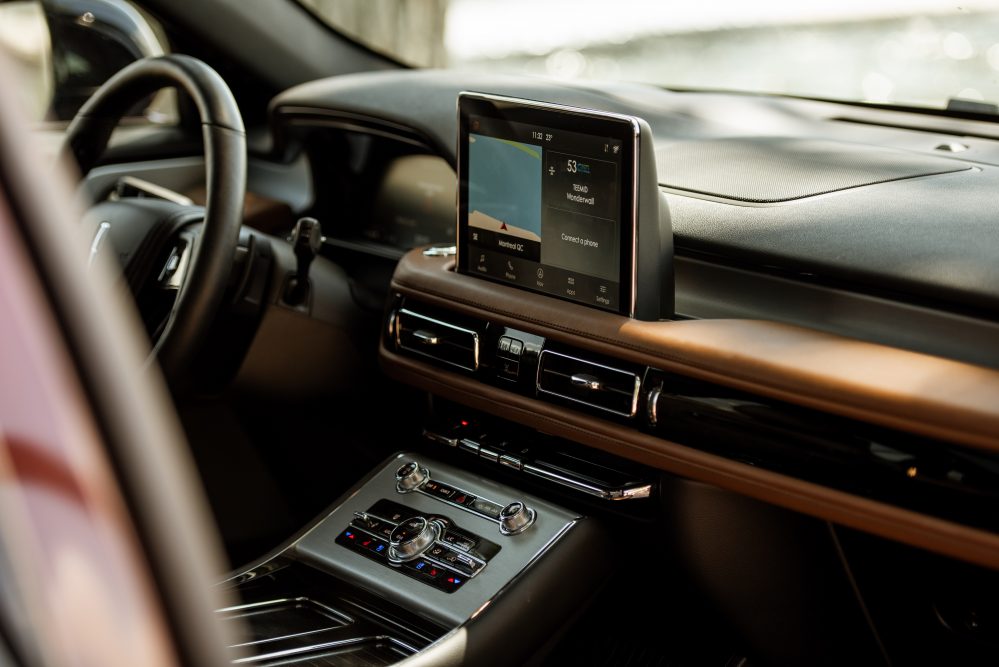 Then there’s the optional Revel 28-speaker sound system which basically sounds like you’re sitting right smack in the middle of a concert hall. In a post-COVID-19 world where actual concerts are deemed unsafe, the Revel sound option here is totally worth the shot. 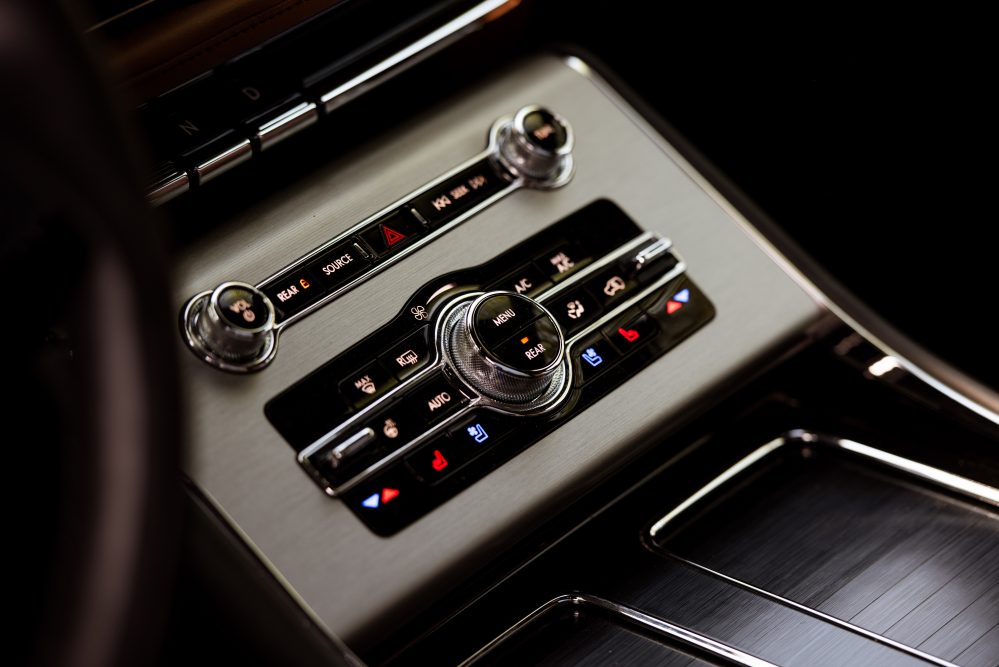 I made a joke up there about the 2020 Lincoln Aviator being a little too expensive. Sure, you could opt for something German in this price range, but what I admire the most about this Lincoln is that it doesn’t try to be like a German product. It goes about its business doing its own thing while properly reaffirming the brand’s ethos. I admire that. Unlike the 2020 Cadillac XT6, which sells for roughly the same price but doesn’t do much to convince buyers to flock towards one, the Aviator actually has its own distinctive character. 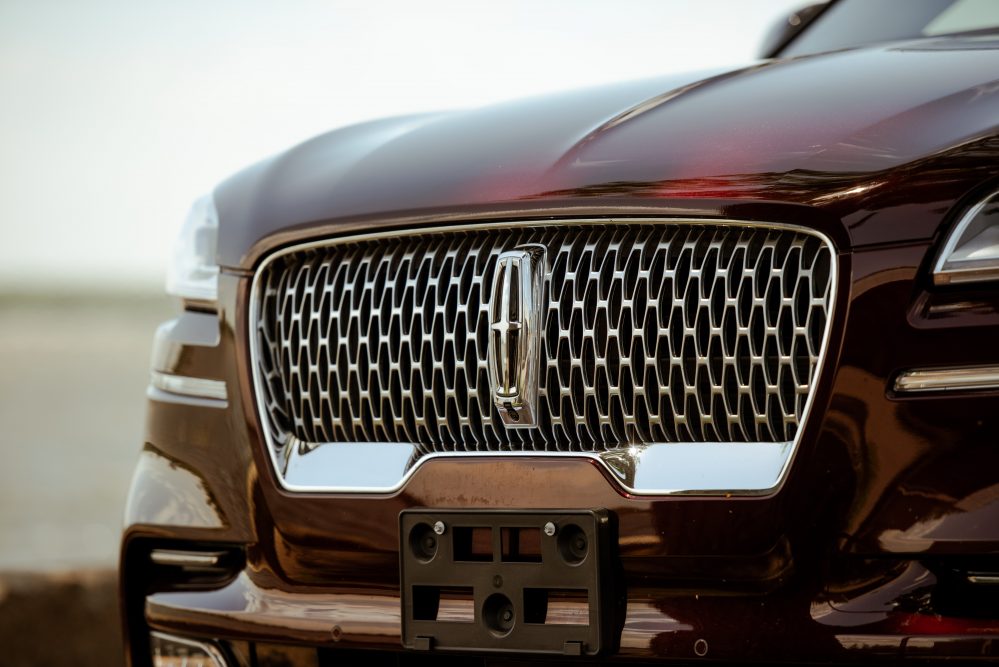 That character is visible through every nook and cranny, from the AVIATOR lettering stamped onto the front fenders, to the clean, airy feel of its premium interior. The dashboard carries over the same yacht theme as in the  larger Navigator, and I personally adore the toggle switches used as gear selectors. Everything has a quality, vintage feel to it, making the Aviator come through as a truly unique machine. 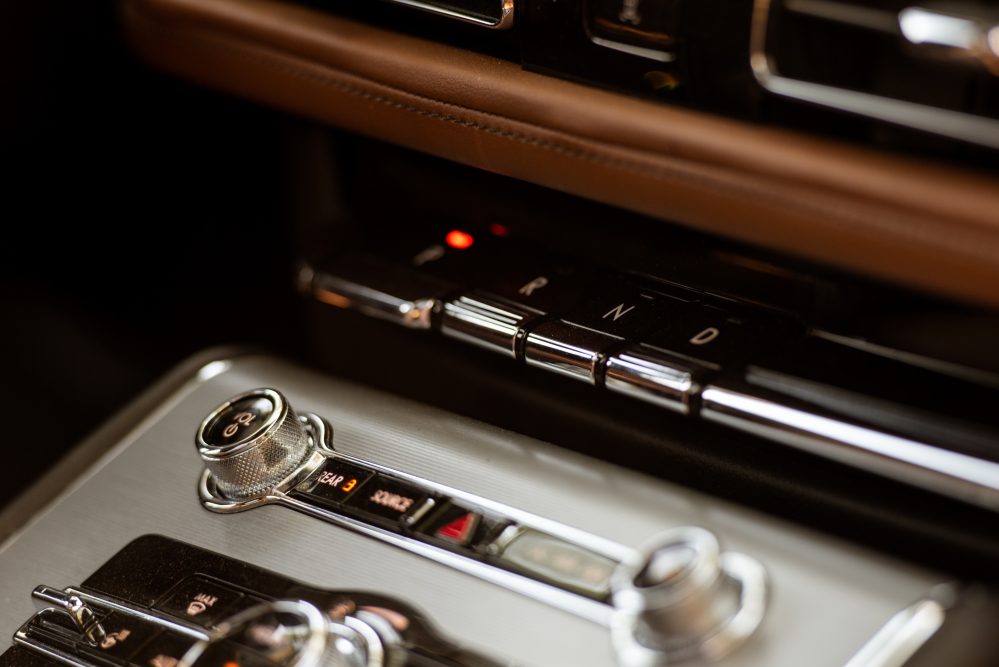 Rear occupants receive a similar treatment. Consumers can choose between two captain chairs (as tested) or a three-row bench affair for the second row. There’s a center console that allows them to adjust their climate and available massaging features. Access to the third row is fine, but once there tall people such as myself could find it a little cramped, especially if you plan on heading out on a long roadtrip. 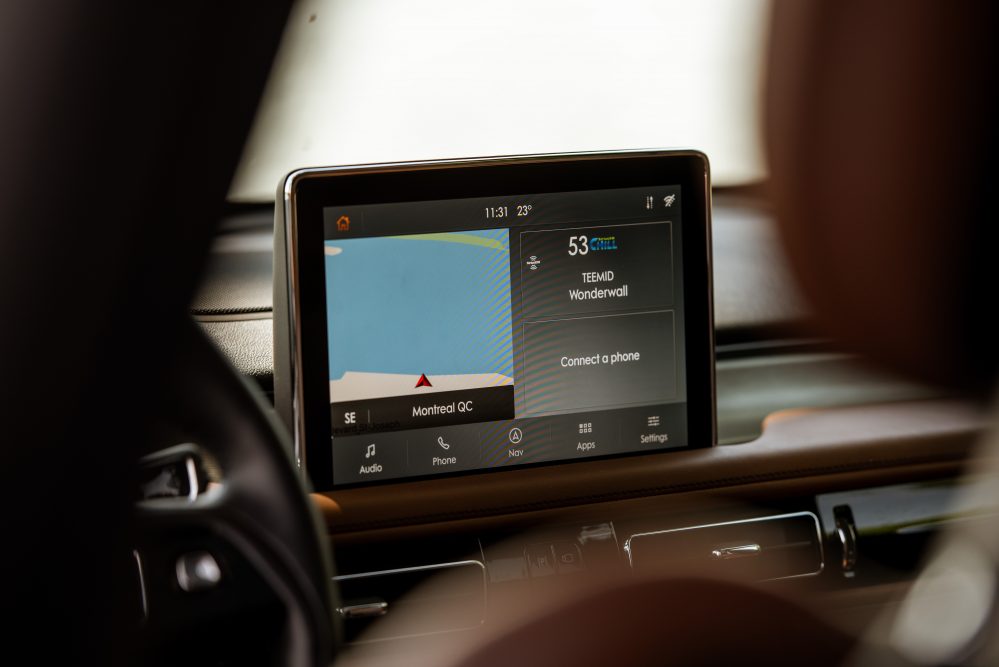 I have a small issue with the available Sync 3 infotainment interface. Overall, it’s well presented and works ok enough, but it ended up lagging more often than I wanted it to. It was also irritating to have to dig through menus to turn off simple gimmicks like the engine’s start/stop feature or traction control. Perhaps it’s because I’m getting old, but I find modern cars have way too many electronics in them. In the Aviator those toys are confusing and in some cases, downright irritating. 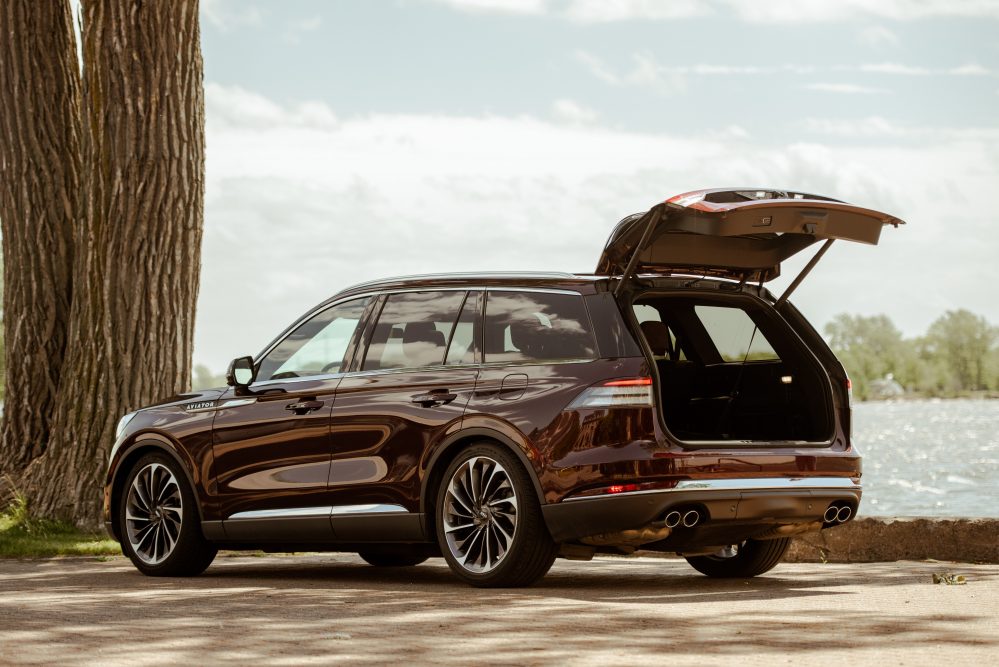 Total cargo space for the 2020 Lincoln Aviator is rated at a frankly reasonable 2,200 liters when all seats are folded flat.  It’s however a tad less cavernous than a similarly priced Cadillac XT6 (2,228 liters) or even well below the much more affordable Acura MDX (2,575 liters). 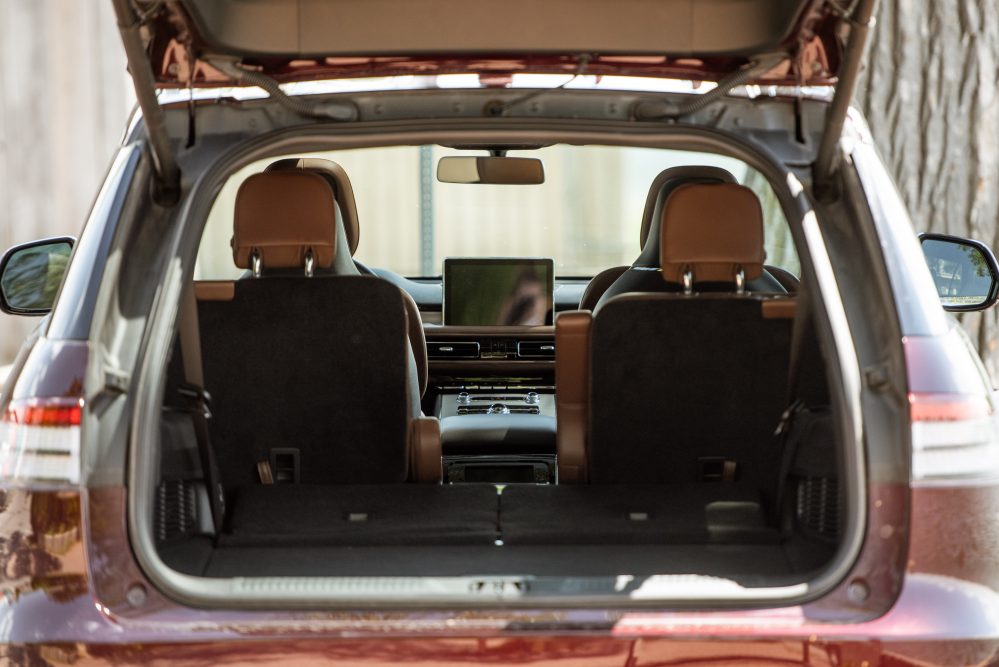 The “smaller” than average trunk probably has something to do with the Aviator’s rear-biased architecture, which sacrifices some interior room, but gives it a distinctive performance edge over its rivals. Still, anything with more than 2,000 liters of total cargo space is enormous in my book, so you should do fine. 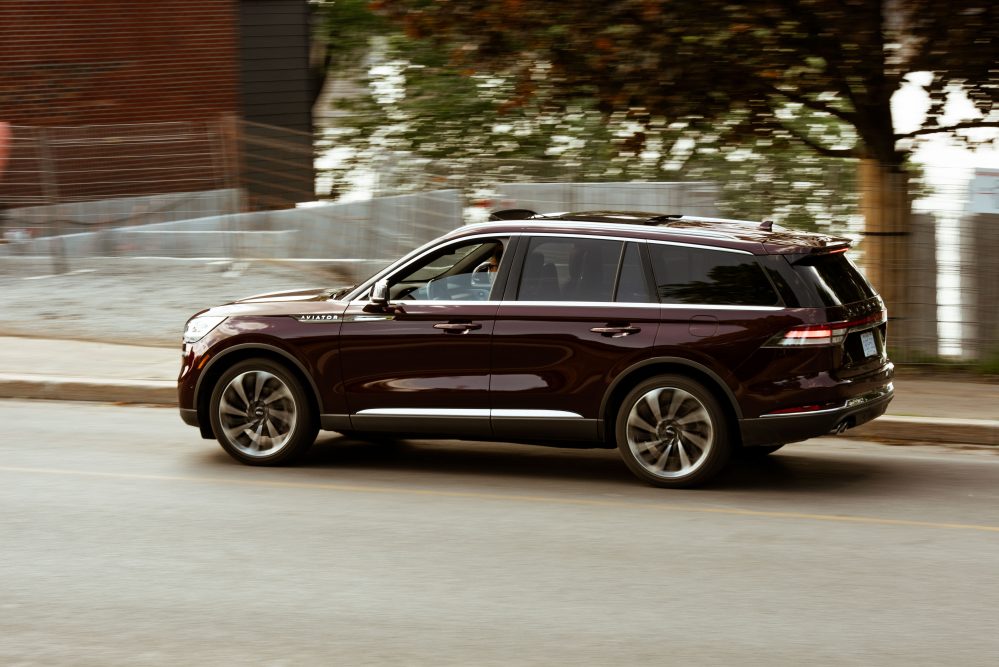 All in all, Lincoln has done a bang up job of reinventing itself while remaining competitive with its latest Aviator. The end result is a fresh, modern and frankly convincing package that should manage to attract younger buyers to the brand. The only real pitfall is how expensive it can easily become and how quickly it will depreciate in the long term. Make sure to tick off the right boxes when you get one, and perhaps lease it instead of buying it, and you’ll be a happy customer.