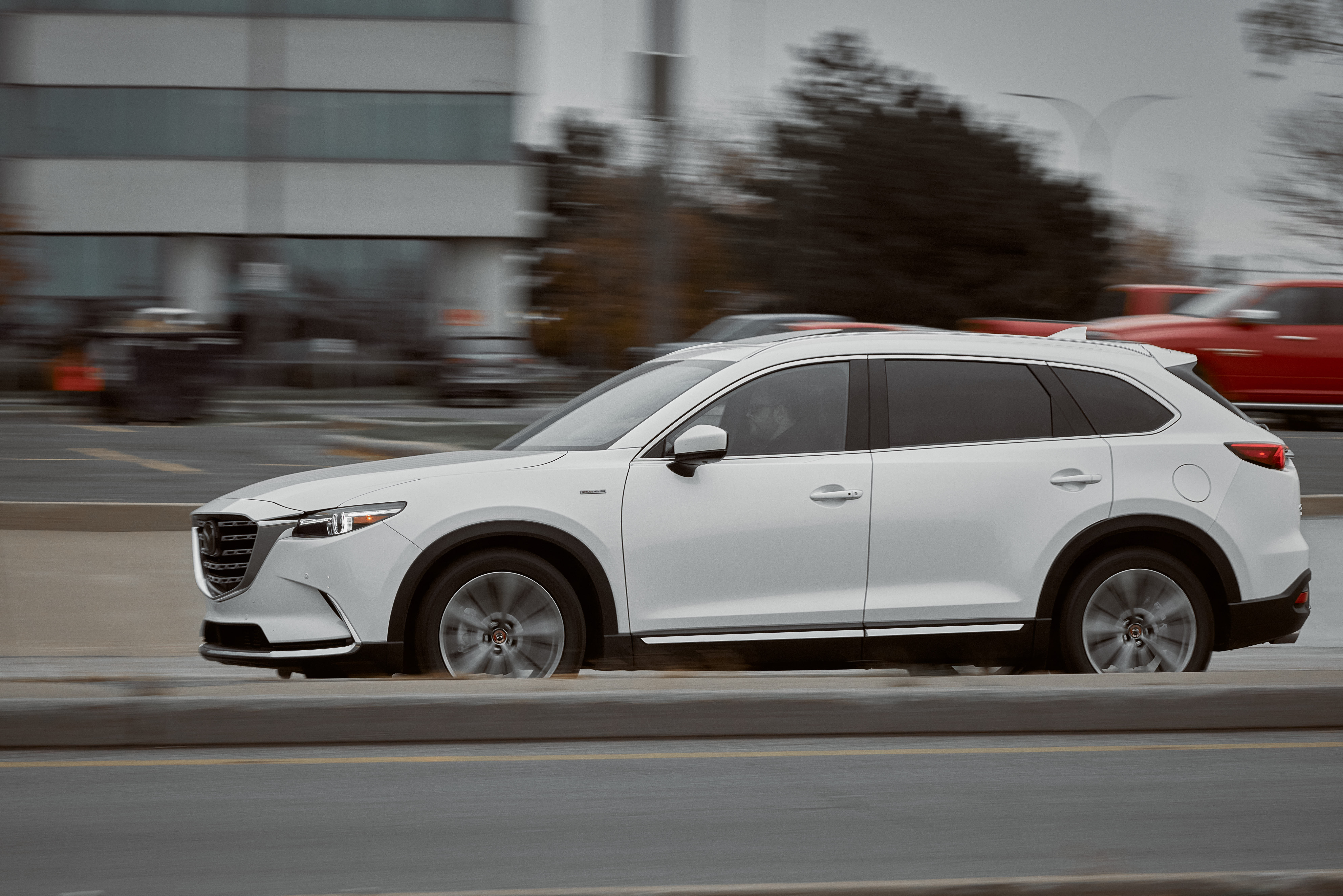 With the 2021 Mazda CX-9 100th Anniversary, Mazda tries to show everyone that it can fool a consumer into thinking he’s buying a much more upscale vehicle. Will people actually pay Audi money for a Mazda? Probably not, but the end product is rather impressive. Allow me to explain. 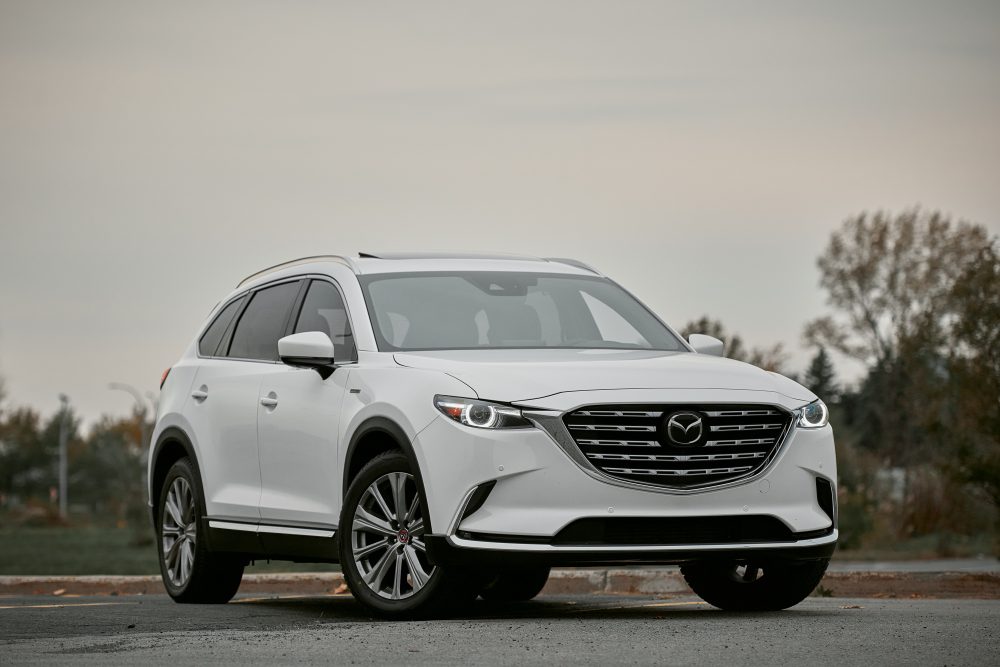 While the second-generation CX-9 has been on our market relatively unchanged since the 2017 model year, it still looks properly fresh and modern. I’m a personal fan of the way recent Mazdas look. There’s a clean, organic and youthful feel to everything that allows the brand to stand out from the pack. And although the 2021 model gets some slight interior revisions and added standard safety technology, this is essentially the same three-row SUV I reviewed back in 2017. 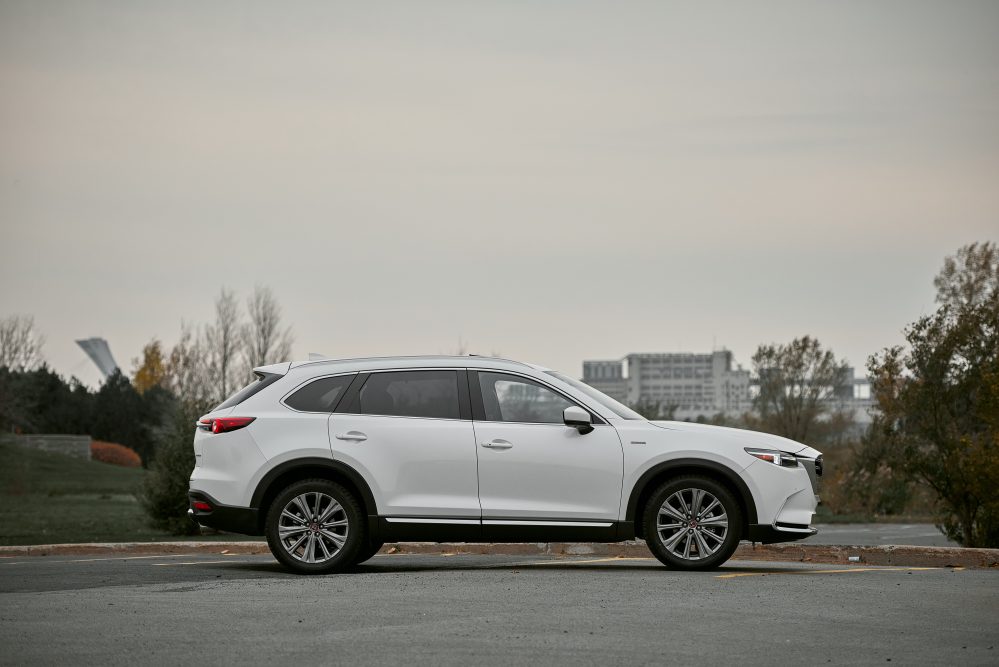 But that’s not to say the CX-9 isn’t a good vehicle, because in this beautifully spec’d Signature trim, the level of quality and craftsmanship you’ll be getting is rather convincing. With its Signature series, Mazda aims at offering premium levels of luxury but at a non premium price. Interior details, such as seats, door inserts and touch points have all been massaged to offer a more high-end feel, which I’ll get back to in a bit. 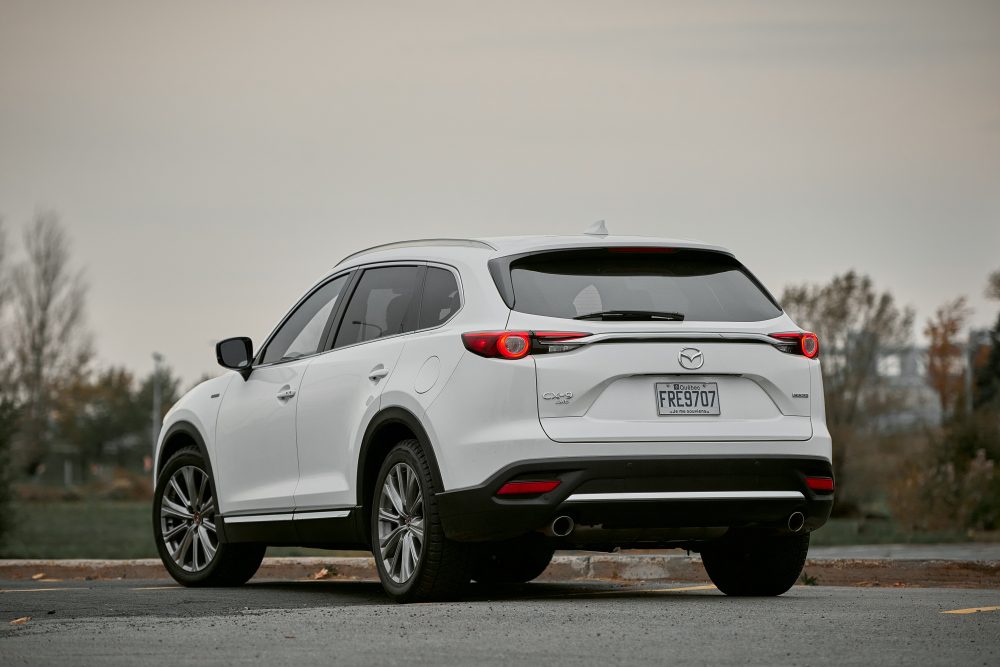 The 100th Anniversary Edition is exclusive to the 2021 model year, and is essentially a modified CX-9 Signature. Mazda offers it on almost all of its vehicles to commemorate its 100 years of being on this Earth. The package is only available in white, with red Nappa leather seats and mats, as well as an array of subtle, yet noticeable badging and styling cues. Unique wheel caps and a model-exclusive key fob, with 100th Anniversary inscriptions, are also part of the kit. 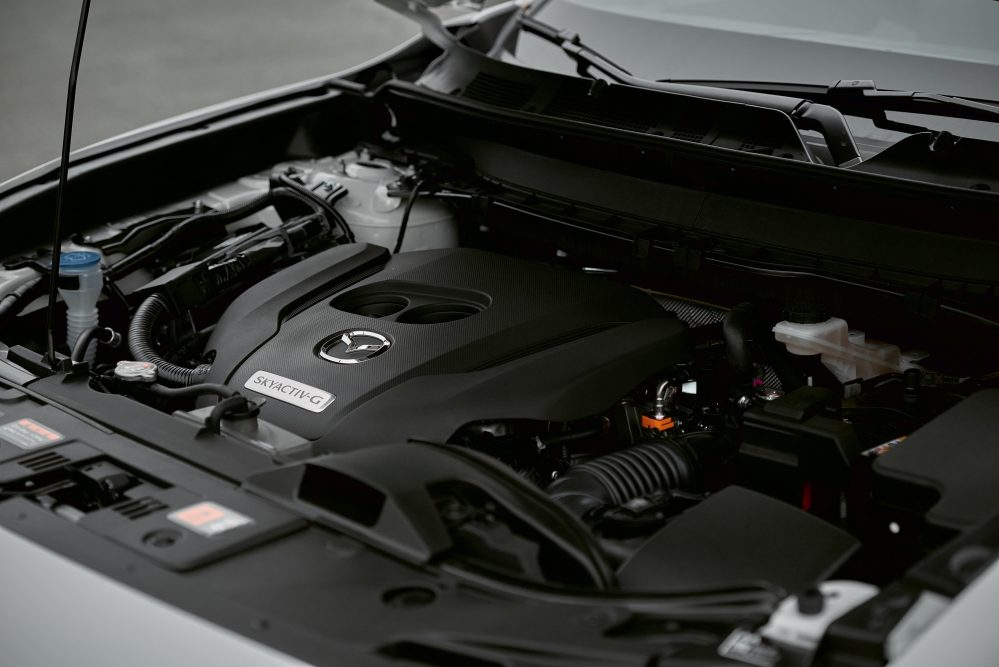 All CX-9s, including this special edition model, are powered by the same turbocharged 2.5-liter four-cylinder. When running on 93 octane premium fuel, it pumps out 250 horsepower and 320 lb-ft of torque. The CX-9 will run on regular, 87 octane gasoline, but its output will drop to 227 horsepower and 310 lb-ft of torque. That’s a bit of a letdown considering some of its V6-powered rivals offer this much performance with 87-octane fue. This engine is mated to a six-speed automatic transmission. 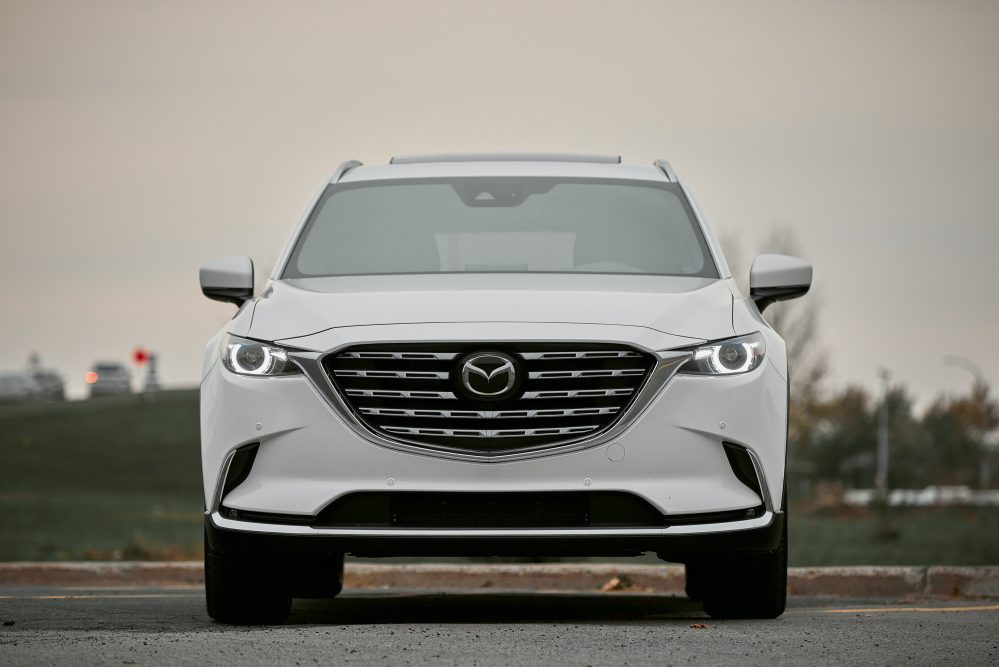 Pricing for a base CX-9 GS, which comes standard with all-wheel drive, kicks off at $41,965. The Signature trim climbs things up to $53,915 for a fully loaded SUV with a spiced up cabin. You need to add about two grand more for a 100th Anniversary Edition. Final price for the Snowflake White Pearl example you see here was $55,415. 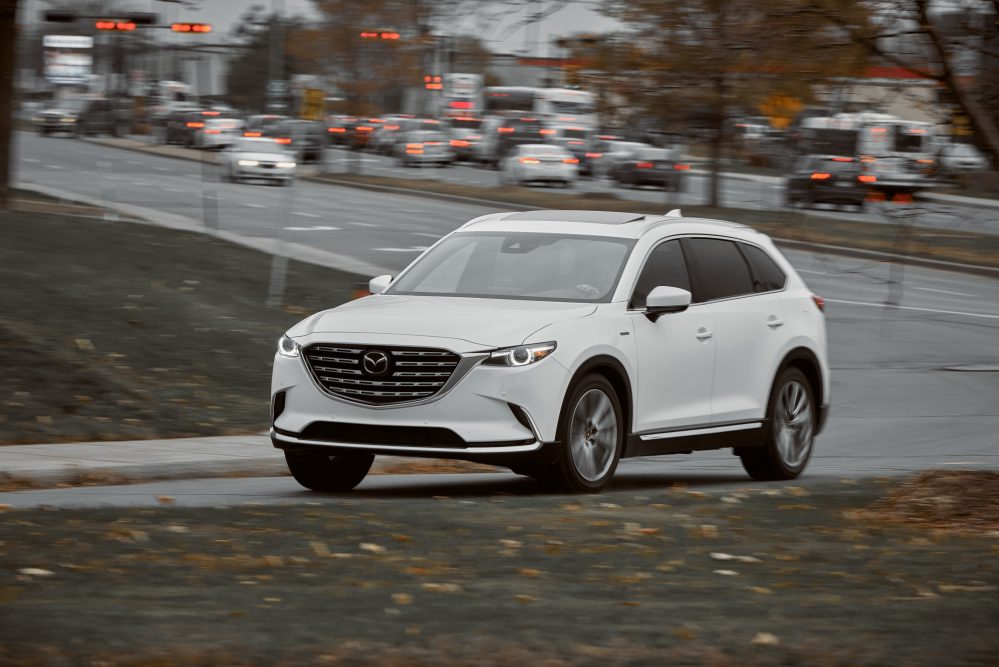 Perhaps what really allows the CX-9 to come through as a unique machine, is in its ability to always remain light on its feet, surefooted and fun to drive. While never quick per say nor particularly agile in corners, its chassis and suspension tuning show signs of greatness. Turn in is quick from the small diameter steering, road composer is impeccable and the entire vehicle corners nice and flat when entering a bend too quickly. 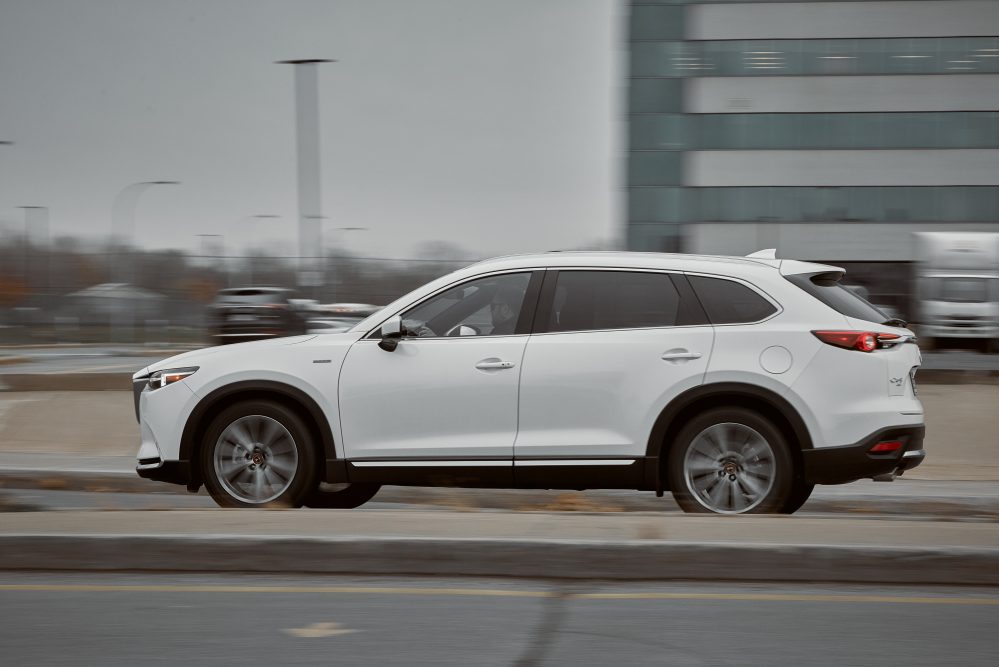 The ride however leans more towards a juvenile side, which is a good thing if you’re looking for a fun and rewarding driving experience, but not so much for daily driving. The CX-9 is bouncy and jittery on broken roads. This is an SUV was engineered to satisfy its driver before its passengers. 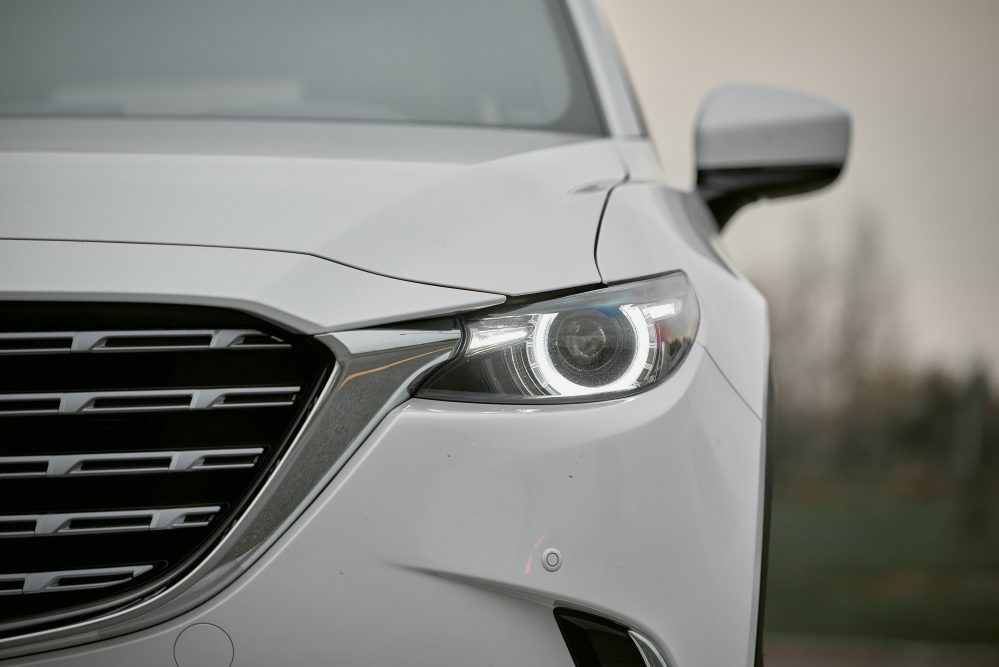 Power from the turbocharged engine is ample, but never frantic. Everything happens down low, with the meat of the torque is produced. Luckily, the automatic gearbox operates at telepathic speeds, always knowing precisely when to change gears and which cog is required for the task. It’s that level of precision and harmony in the drivetrain that distinguishes Mazda from the rest. 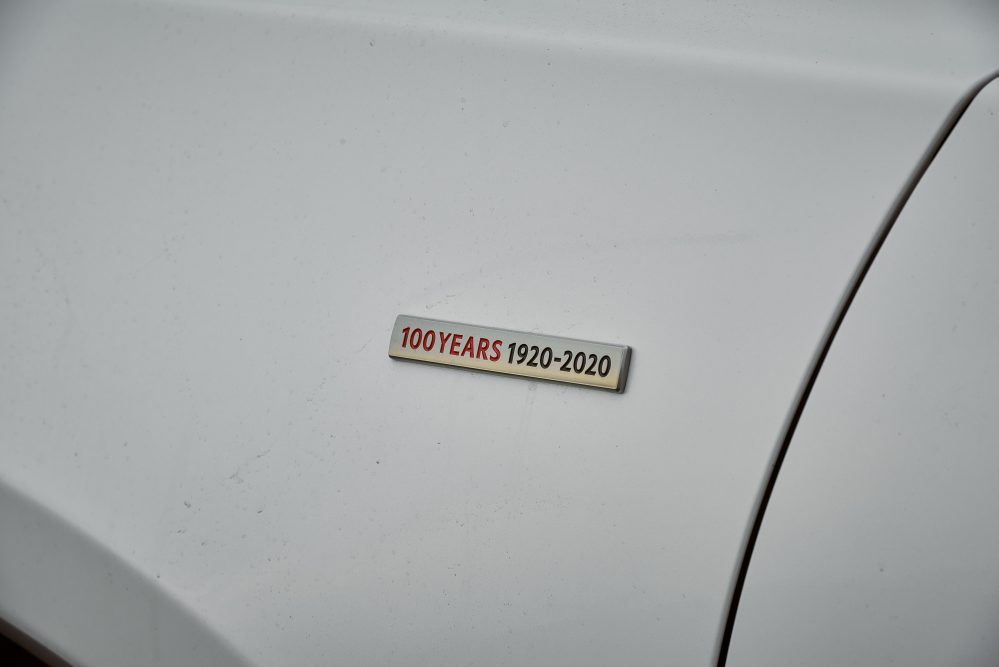 Speaking of rivals, the CX-9 has a lot of them. While the little Mazda punches them in the gut with driving dynamics, styling and overall substance, it takes a back seat in standard SUV functionalities. For instance, max towing is rated at 3,500 pounds in a CX-9, while most of the competition – things like the Kia Telluride, Chevrolet Traverse or Honda Pilot – will haul up to 5,000 pounds. 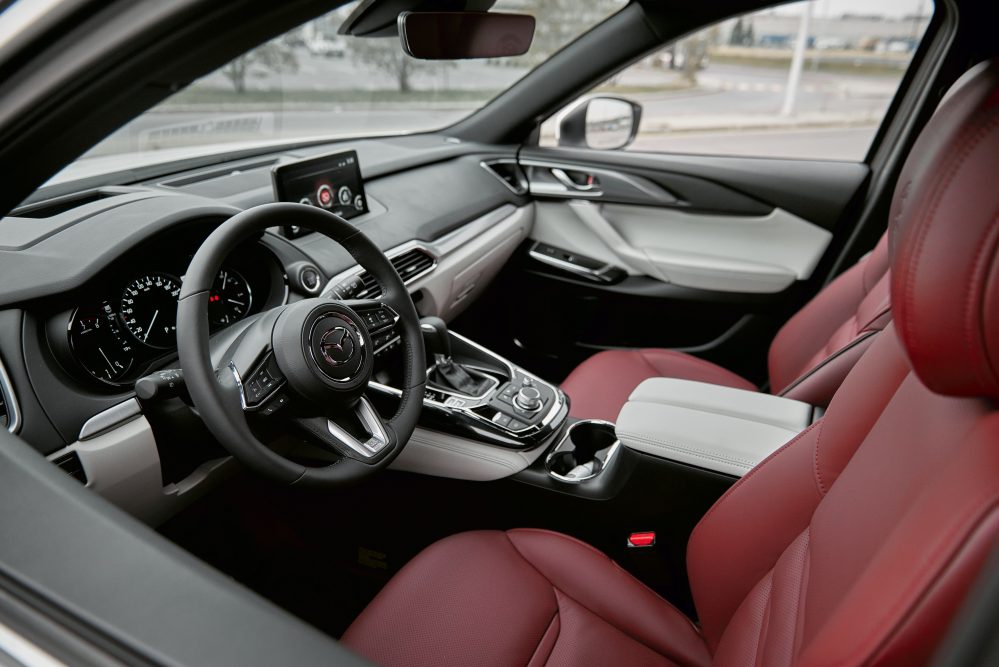 But then, none of those vehicles offer an interior as attractive as this Mazda’s, and in 100th Anniversary attire, the 2021 Mazda CX-9 simply cranks things up to 11. On top of those bitchin’ looking red seats that contrast super well with the cabin’s upscale materials, there’s white leather on the center console and door inserts. The white theme is carried over to the dashboard’s top section. It’s absolutely gorgeous, but I’m not sure it’ll age well with kids continuously hopping in and out of it. 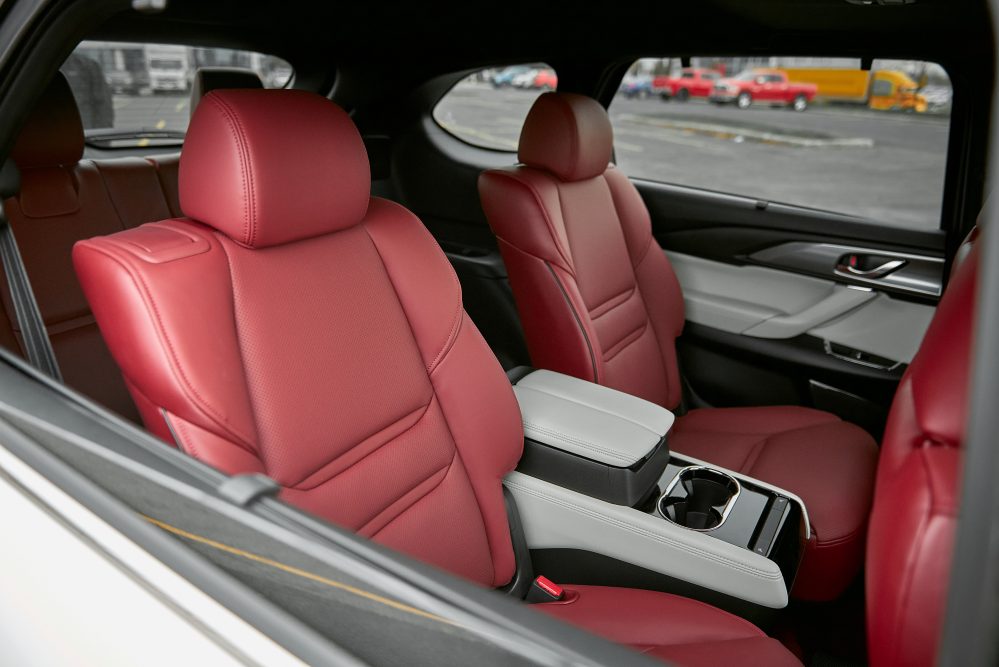 Rear passenger room is good in a CX-9, but never great. The second row is fine, and with these captain chairs in place, the center section yields a massive center console that gives the rear passengers more storage, more cupholders and more USB ports. 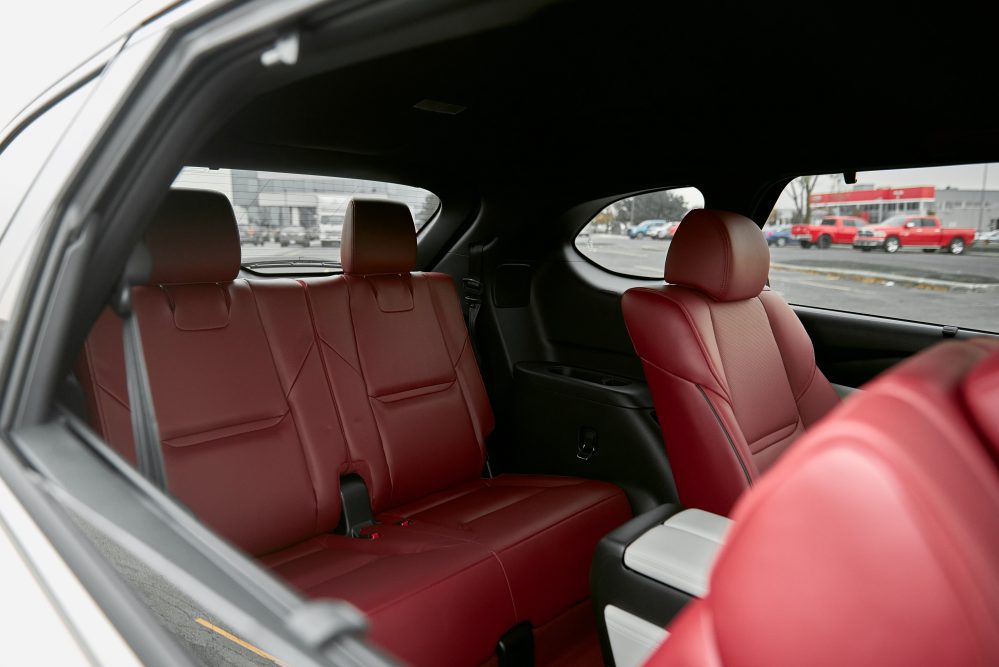 Accessing the third row requires a bit of a contortionist act, but once you’re back there, there’s a surprising amount of comfort if you’re a big human such as myself. That said, as it’s the case for most three-row midsize SUVs, I highly recommend reserving those seats for the kids. 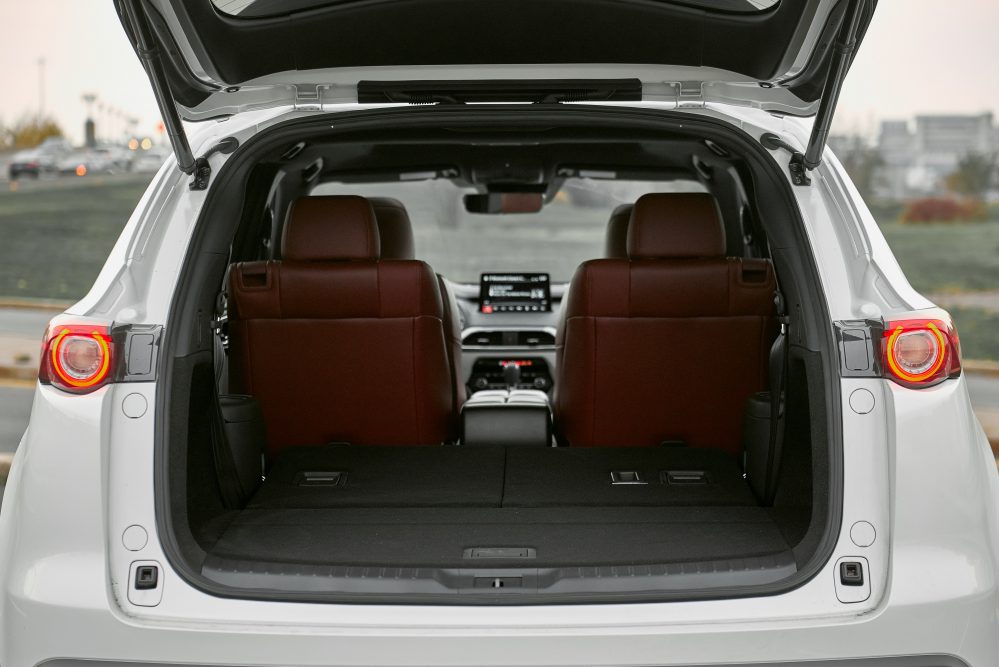 Total cargo space is another area where the CX-9 significantly lags behind its rivals. While it will engulf up to 2,017 liters of your gear when the rear seats are folded flat – which is massive – the CX-9 gets eaten alive by competitors like the Subaru Ascent (2,375 liters), Kia Telluride (2,463 liters) and Volkswagen Atlas (2,741 liters). 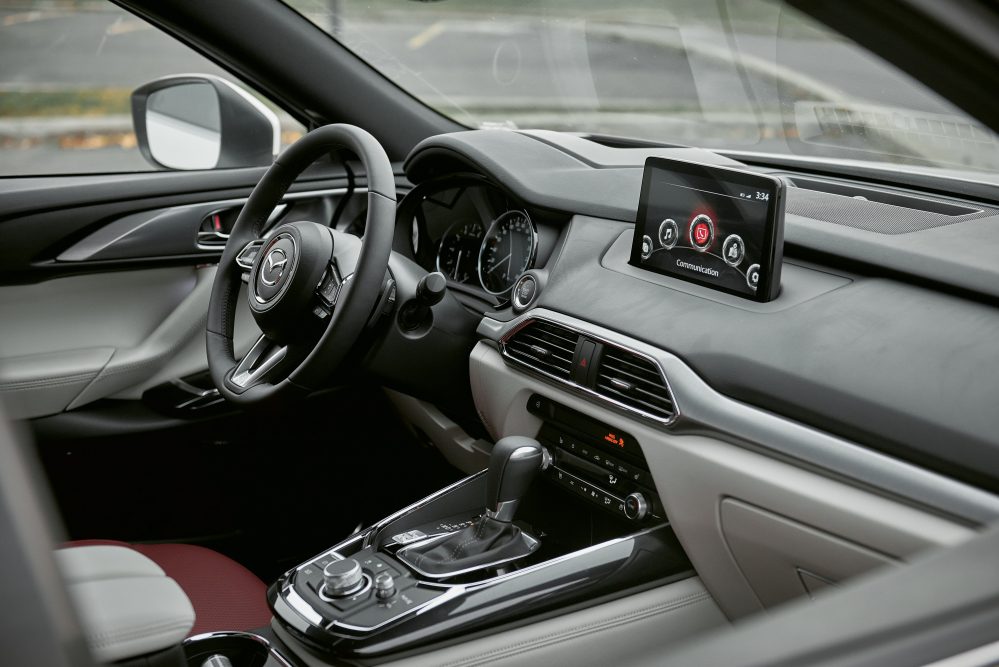 But darn is that cabin well put together and inviting. Controls are well located and easy to grasp, while the half analog, half digital gauge pod is an elegant blend of the past and future. For 2021, Mazda added a larger 10.3-inch infotainment screen as standard equipment, and updated the interface to mimic what’s currently offered in the Mazda3. 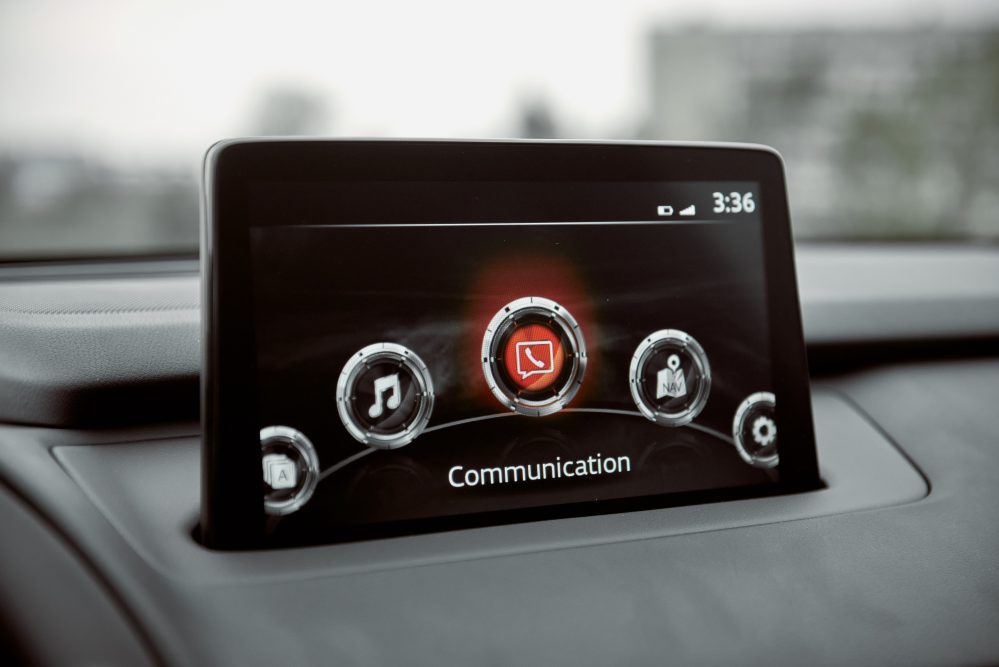 However, behind the fancy layout hides CX-9’s old software. It’s not a bad one; it gets the job done, and that console-mounted knob dial remains as intuitive as BMW’s iDrive. But it’s not Mazda’s latest interface as the CX-9’s press release would like you to believe. 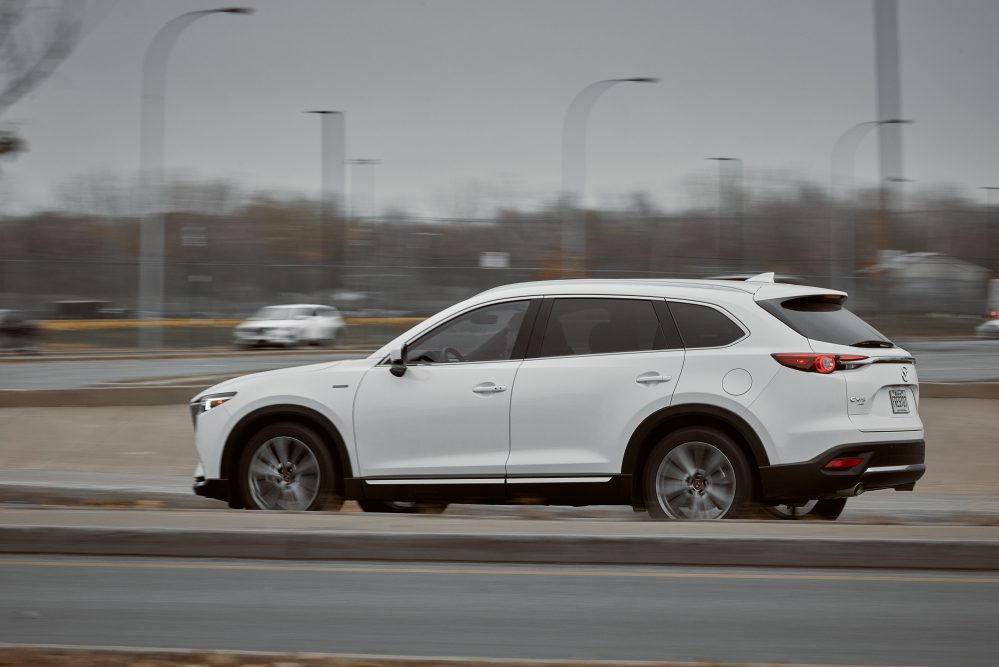 Will the 2021 Mazda CX-9 convince Audi, BMW and Mercedes owners to flock to a Mazda showroom? I think not. There’s already the Genesis GV80 to take care of that. But it is proving that Mazda knows how to make a premium vehicle sold at a reasonable price. If you’re willing to sacrifice a bit of towing and cargo space, then the CX-9 is a classy alternative that’s not half bad to drive.