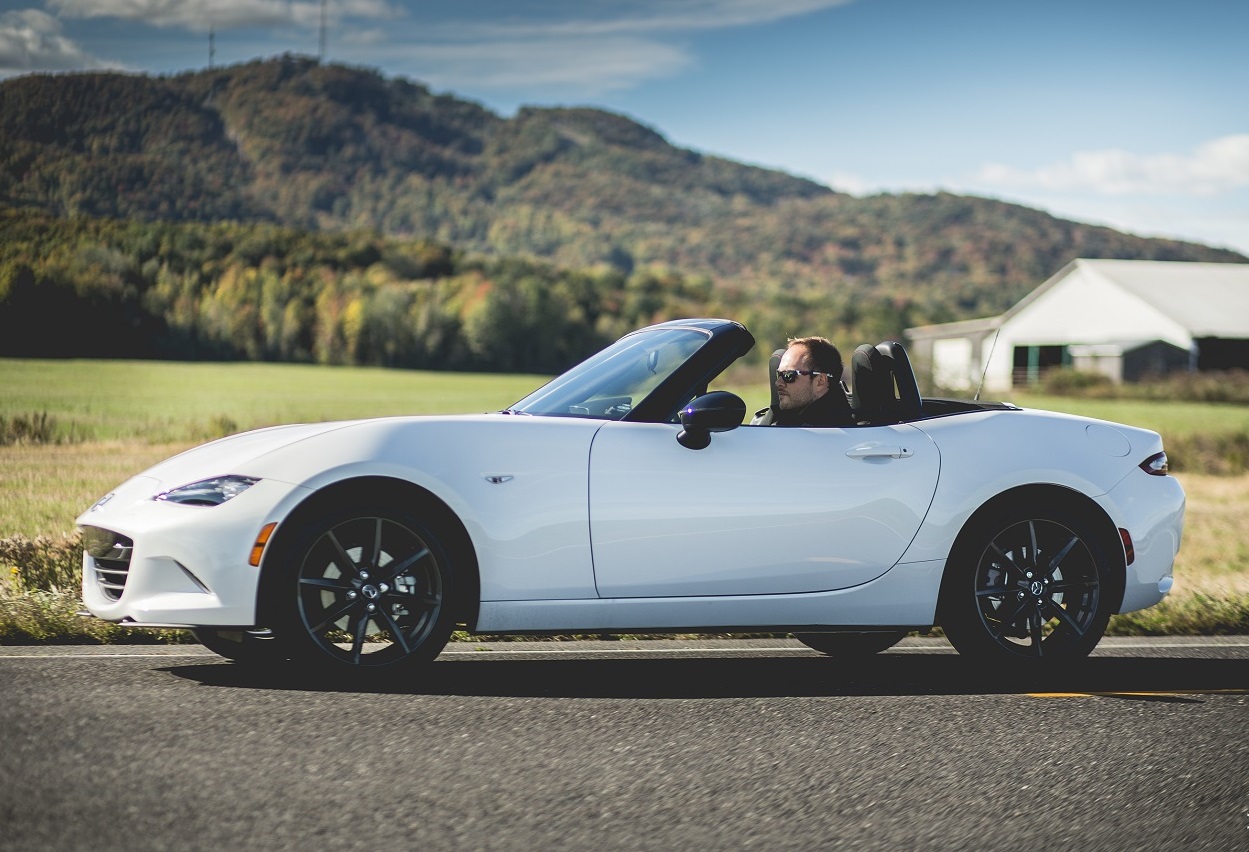 Does any of that matter?

Because the moment you’ll start driving this thing, you’ll immediately wonder why all other cars on the road don’t feel like an MX-5. 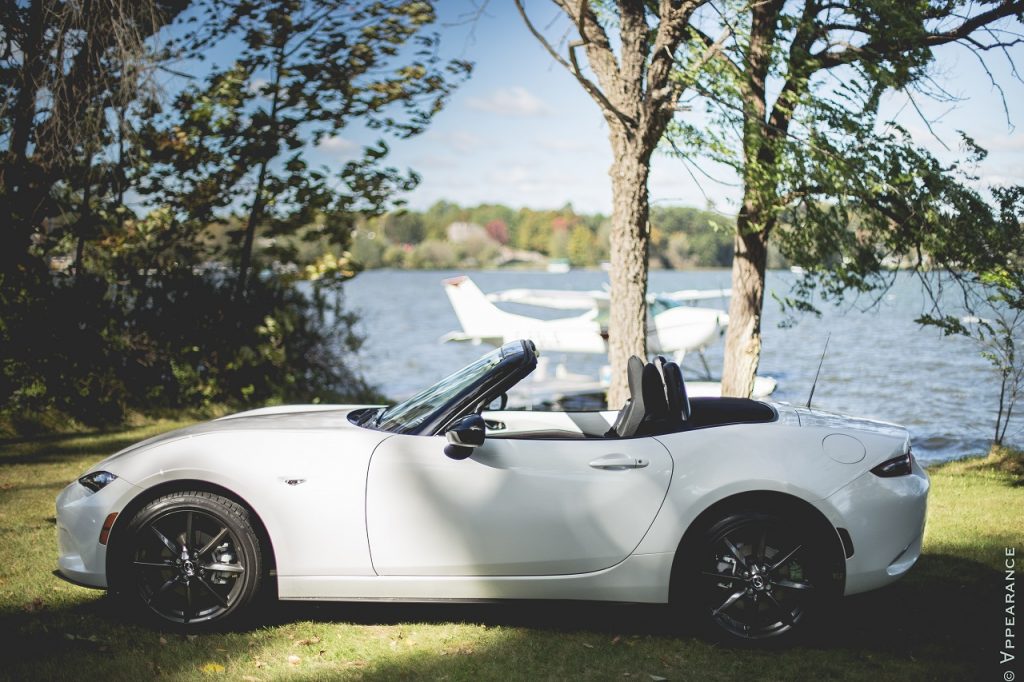 It’s so refreshing to see something so small, so light, and so straight forward come out nowadays. In a world filled with overweight crossovers, complicated infotainment systems, and boring CVT transmissions, Mazda’s new roadster, smaller and lighter than its predecessor, is without a doubt one of the most refreshing new car releases we’ve seen this year.

This car is as straight forward as it gets. All you’ve got inside are two seats, a really easy to operate retractable roof, a shifter, a steering wheel, and pedals. Nothing complicated here, you just get in and drive. 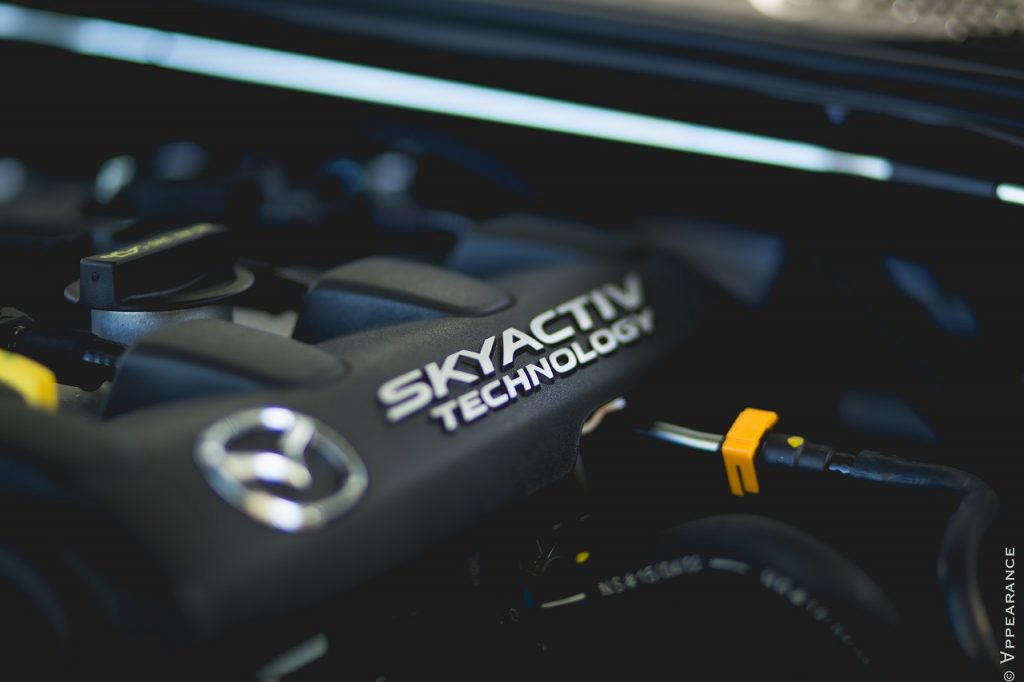 And this fourth generation model looks seriously cool with its new aggressive face (this is the most pissed off looking Miata I’ve ever seen), blacked-out wheels, and Jaguar F-Type-resembling rear end. This is no longer a hairdresser’s car, but a genuinely sharp looking sports machine that combines design cues from several legendary cars. Look at it from profile, from the door to the rear, and you’d swear it was a modern interpretation of the E-Type. It’s a truly well executed design that manages to remain distinctively MX-5.

It’s also stanced particularly well. The tires aren’t really that wide, but Mazda has pushed the wheels to the extremity of the car to give it a tapered and hunkered down look, like it’s ready to attack the road at any moment. 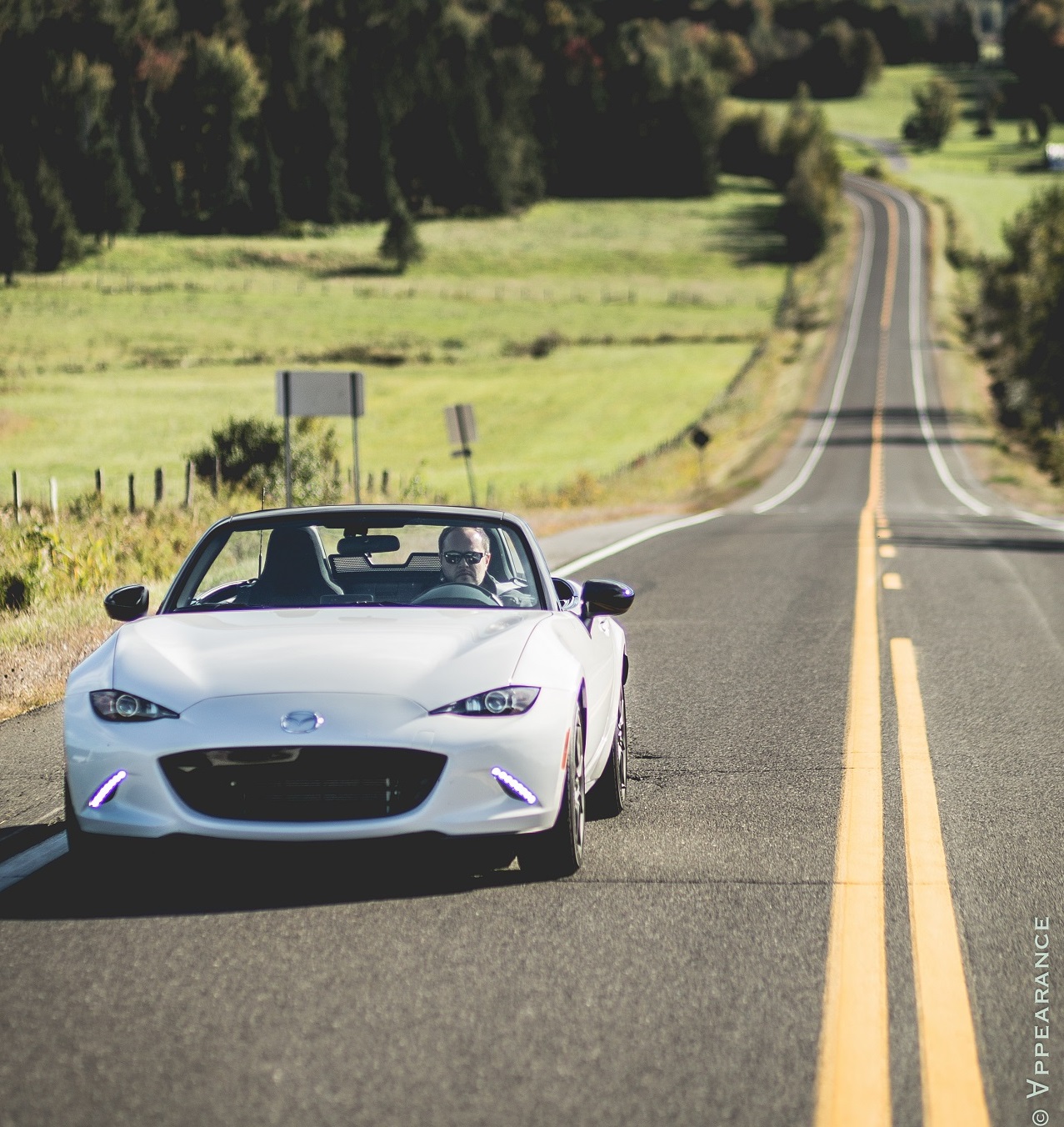 Now consider the fact that cars nowadays need to be crammed with heavy electronics and a whole bunch of safety features like air bags and high strength steel, and the MX-5 comes through as quite a marvel of engineering.

That obsessive desire to save weight, what Mazda calls the gram strategy, has an impact on all of the car’s attributes. For instance, even with a 15-hp deficit on the previous version, the 997-kg MX-5 accelerates half a second faster to 100 km/h than the car it replaces.

How cool is that?

And you feel the lightness when you squeeze the throttle. It doesn’t take much time for this little bugger to gain speed, and while it may not be vicious Mustang 5.0 shove-you-in-your-seat acceleration, the MX-5’s 2.0-liter four, taken from the Mazda 3, but retuned for performance, is responsive, peppy, and makes this roadster respectfully quick off the line.

Even with the automatic.

Yes. My tester was an automatic.

I don’t understand why Mazda even offers an automatic box for this car. The goal of the MX-5 is to defeat convention, a big middle finger to the current trend of oversized, boring, soulless automotive appliances carmakers are shoving down our throats these days. Why put a slushbox in your MX-5 Mazda? WHY?! 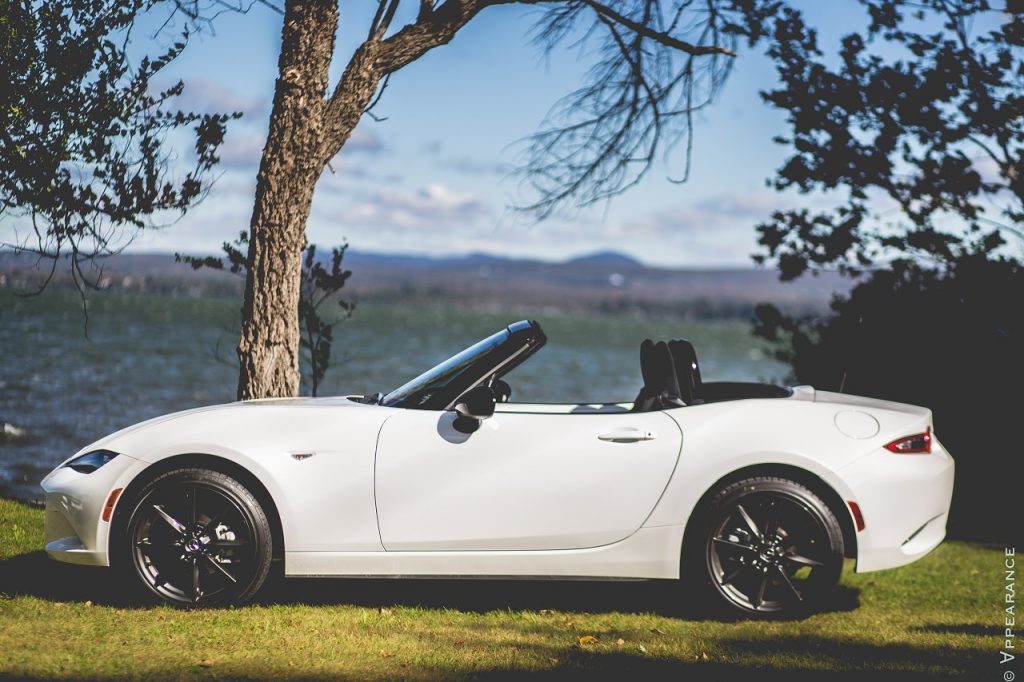 The automatic isn’t that bad. It’s a six-speed unit, has a “sport” mode, and paddle shifters behind the steering wheel. In automatic mode, when driving around town, I’ll admit, it lags a bit, annoyingly downshifting for no reason, and requiring hard throttle input to get it going. But in manual mode, with the sport button activated, which actually seems to alter its operation, the system somehow becomes quick and responsive. In some cases, it almost felt like a dual clutch unit. I’m not kidding here, the automatic doesn’t take much away from the MX-5’s performance, and after a while, it actually grows on you.

But still, get the manual.

It Begs You To Play

The first thing you’ll want to do once behind the wheel of an MX-5 is hit a country road and attack some bends. As with all previous generations, this car begs you to push its limits.

And man is it fun to drive.

First impression when hitting a bend fast is how much body roll you get from the suspension. It’s surprisingly soft, and exhibits excessive nose dive when applying the brakes hard.

Trust me though, that bodyroll, well it’s no accident. It’s there for you to experience the car’s limits, all the time. No matter how fast (or how slow) you’re going, the little Miata communicates everything its wheels are doing directly to your fingertips. It’s always talking to you, moving about, wiggling, waging its tail whenever it can, begging you to hoon it around.

This is not a car, it’s a tool of utter precision, sharpened for maximum driver involvement.

Drive it hard into a bend and once the loads of grip have been overwhelmed, the whole car feels like it automatically prepares itself for excessive over steer, the rear lifts, the nose dives, and the little roadster quickly transfers its weight to a perfectly managable drift maneuver, all controllable with your little finger. You can’t go wrong with this car. Hit any corner, at any speed, and I promise you’ll make it out alive, probably laughing.

OMG, I WANT EVERY CAR ON THE ROAD TO BEHAVE LIKE THE NEW MX-5.

In traffic, it scoots around with grace. Steering is sharp and responsive. Visibility is spot on, and the puny dimensions mean you can easily place it where you want it. Need to get in front of that big rig up there? Downshift, swing by it, and squeeze yourself in front with little drama. It’s so tiny, and moves around so swiftly, that no one will even notice you’ve just cut them off.

What’s that in the distance? A rain cloud? Just reach over, grab that rag top with one arm, snap it back into place with a single clip, and voilà, you’re covered from the rain.

Everything about the MX-5 is simple, everything works in massive common sense, light as feather, and it proves to the entire world that you don’t need a big engine, big wheels, or complicated electronics to make a car work. It’s brilliant!

Inside, you get a frankly beautiful interior, with easy to read gauges, surprisingly comfortable seats, good quality materials, and an intuitive and easy to operate infotainment system. It definitely looks good in there, especially that slab of plastic inside the door panels painted the same color as the car. It blends nicely with the front fender humps, and adds a classic roadster touch to the interior.

Winning On So Many Levels

Mazda’s new MX-5 is not just an updated version of the old model, but a celebration of over 25 years of mastering the roadster concept. They’ve taken all the good traits of older generations and have sharpened them to scalpel levels of precision.

There isn’t much else to say about it except that it’s a blast to drive. You’ll find yourself doing bonkers power slides at every corner just for kicks.

Is this car flawed?

You bet it is.

Although the interior ergonomics have been greatly improved, it’s still really tiny in there and hard to get in and out of, especially for a big guy like me. Passenger leg room is almost non-existent thanks to that stupid cup holder sticking out of the transmission tunnel (it can be removed). Road and wind noise levels are also extremely high due to that soft top, and shut the doors with the windows down and you hear those windows vibrating inside the doors, making the whole car suddenly feel rather flimsy. 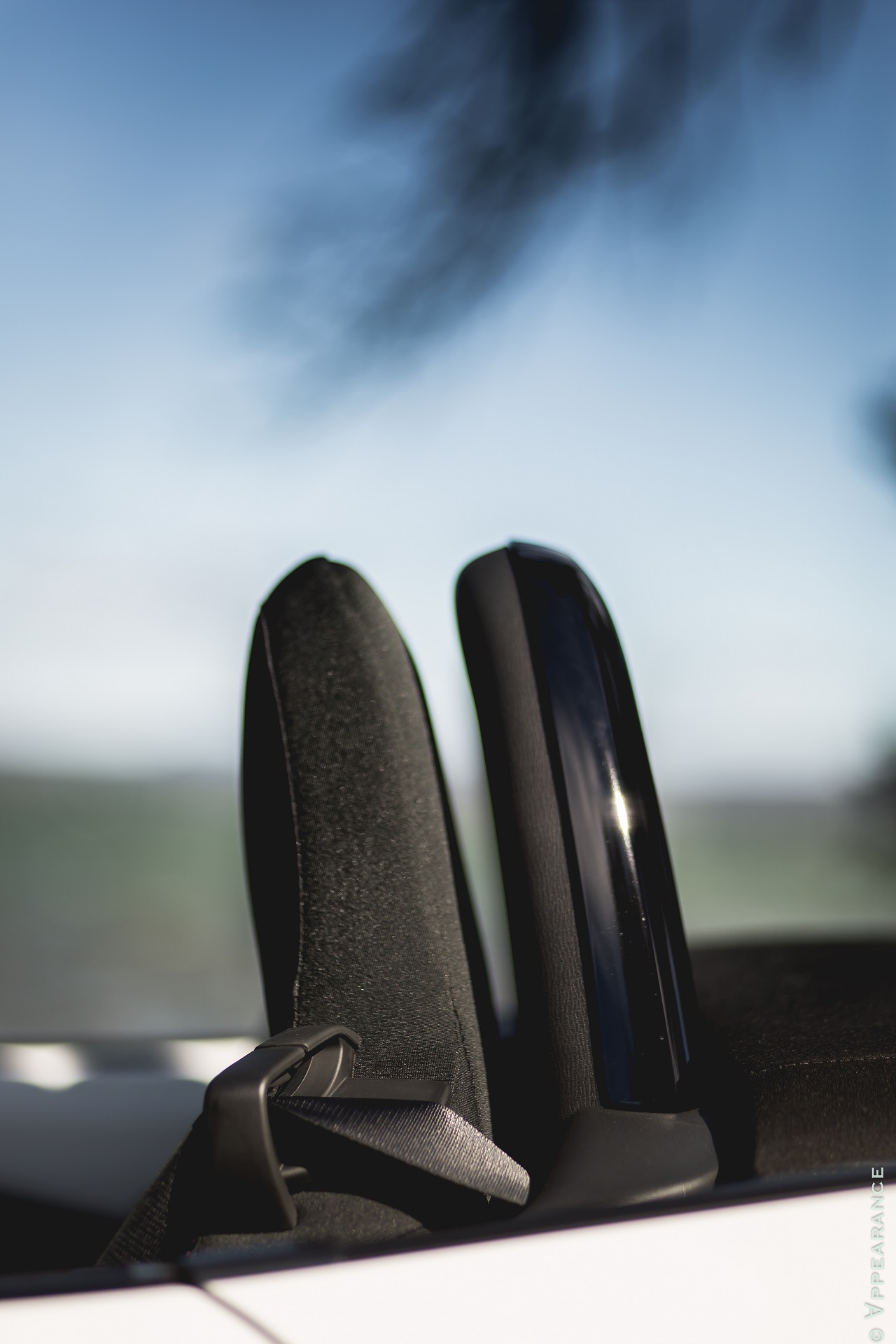 But who gives a shit right?

I still love this thing. Because the MX-5 is the puppy dog that runs around the room asking everyone to throw the ball. It’s always happy, and always eager to play. It’s grin-on-your-face, wind-in-your-hair motoring, the very expression of what a roadster should be.

Prices for the 2016 MX-5 start at $33,807 for an entry-level GX model, and will climb up to $41,107 for a full-spec GT which comes with upgraded 17-inch wheels, Bilstein shock absorbers, a strut tower bar, limited-slip differential, and beefier Brembo brakes. It doesn’t have many competitors, except maybe the Subaru BRZ and Scion FR-S twins, which offer similar levels of driving fun and lightness. But the MX-5 is a convertible, so you can work on your tan while having fun behind the wheel. 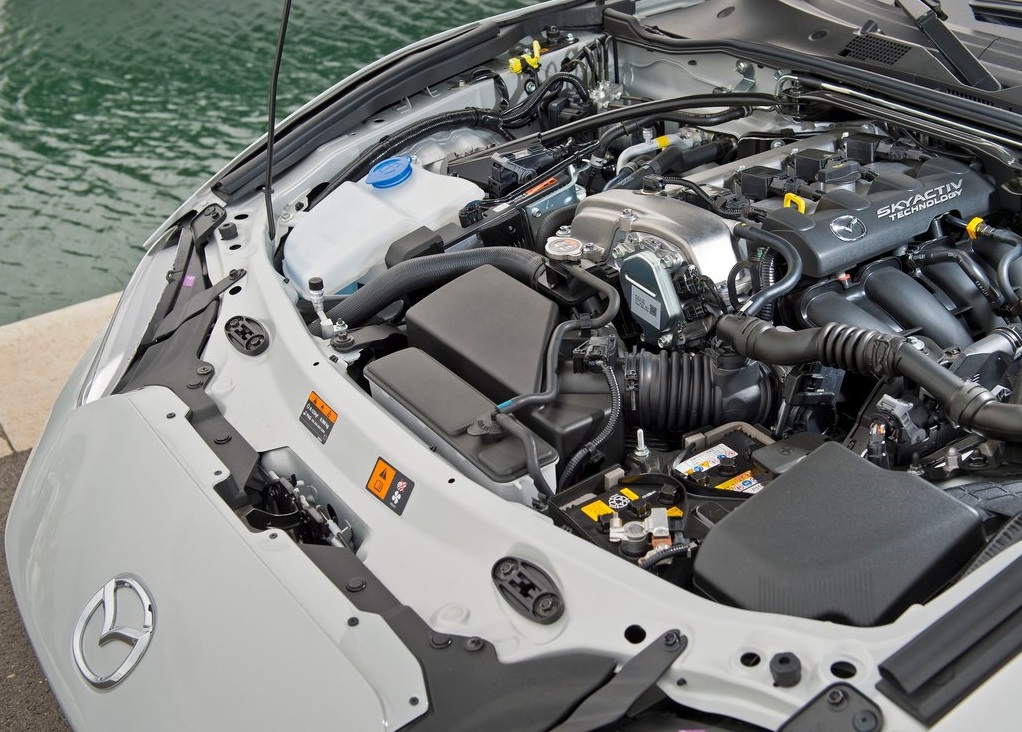 All trim levels come with the 2.0-liter, Skyactiv, 16-valve engine good for 155 hp and 148 ft/lb of torque. An engine that, like in the Mazda 3, remains rather frugal at the pump. I achieved an average of 7 liters per 100 km/h during my test drive. Not bad considering I was almost always hooning it around.

Mazda, you’ve done a great job at modernizing your little sports car. Indeed, long live the roadster. It’s a truly engaging summer toy that won’t ruin your budget; a car that’ll guarantee a smile on your face every-single-freakin time you’ll get behind the wheel. And that my friends, is probably the best quality a car can have.

Review of the 2016 Mazda MX-5 by William Clavey

+
+ Beautiful exterior design.
+ Smaller and lighter than its predecessor.
+ Seriously fun to drive.

–
– Kind of small in there, not for big people.
– Very little passenger leg room.
– Lots of wind and road noise.