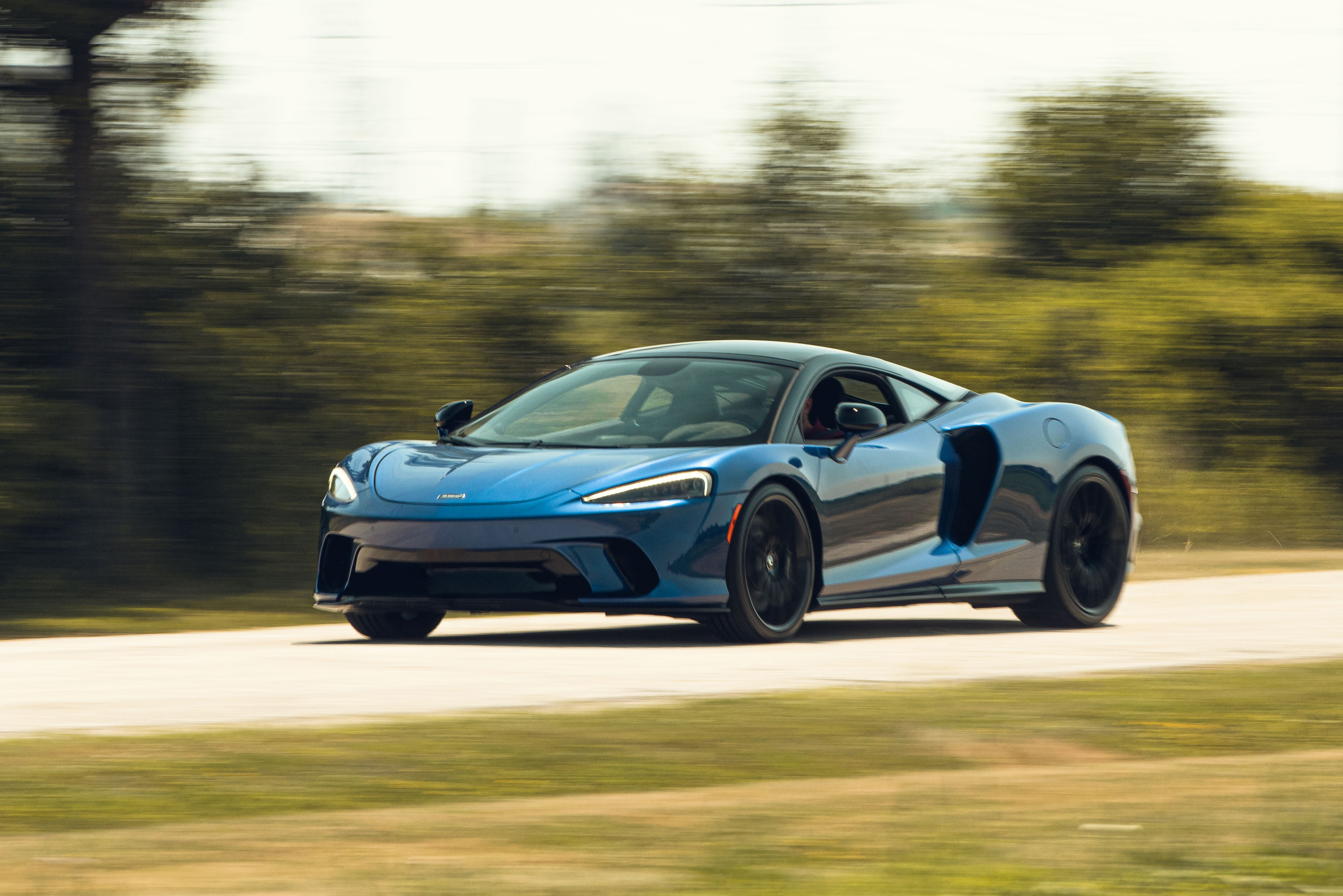 The 2020 McLaren GT may seem like yet another super fast and expensive sports car, but it actually fills a very specific niche, one where consumers expect a different kind of high-performance machine, something a little tamer and more civilized than your average exotic. Believe it or not, this kind of request happens more often then we think in the posh world of supercar owning. While yes, supercars were never intended to be daily driveable, McLaren proves it’s possible to actually make it happen with the GT.

Get That Corvette Out Of Here 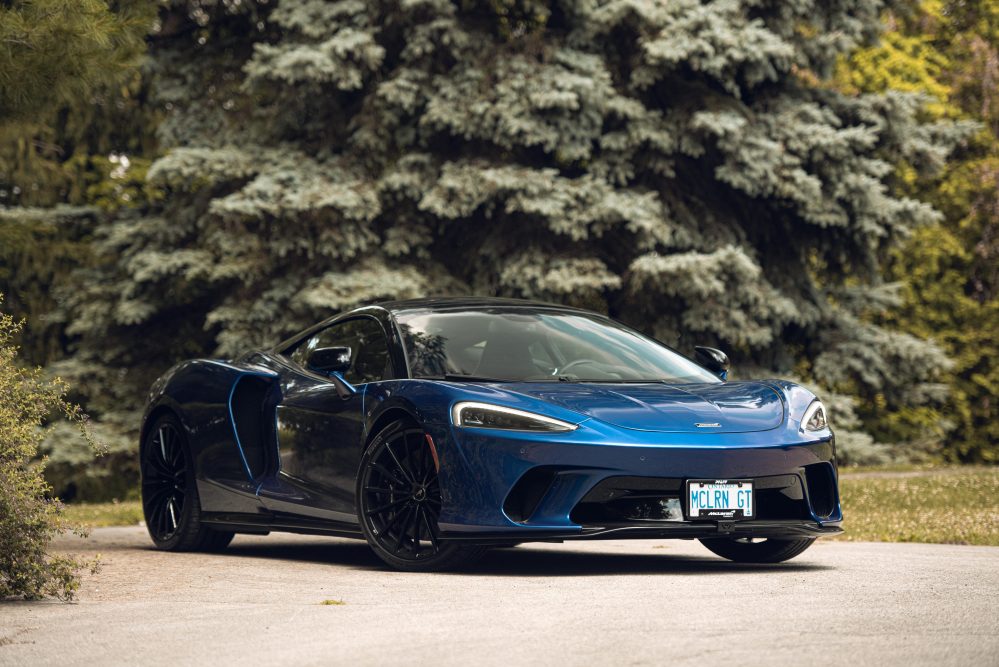 Ok, fine, it’s hard to not compare the 2020 McLaren GT to a C8 Chevrolet Corvette, but I promise, the McLaren looks a lot better than that Chevy in person. Also: scissor doors, man. 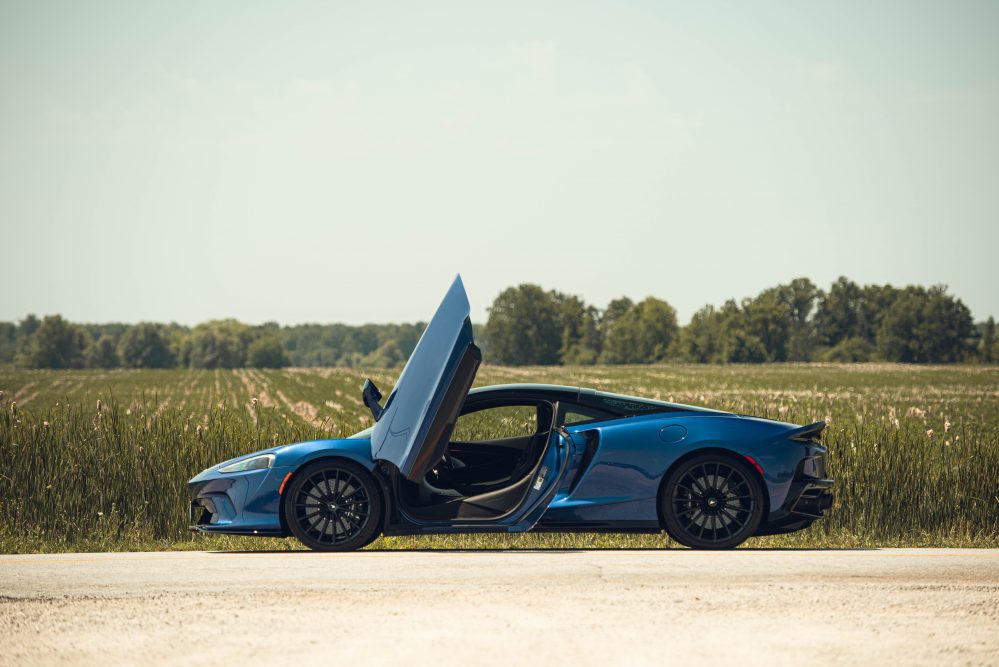 But yes, I agree that from some angles this looks a lot like a Vette, more specifically the car’s front fascia and long, flat, wide shape. But take a closer look at it and you instantly recognize a much more sophisticated high-end product. It looks, well, like a McLaren, which means it looks expensive, highly technical and immensely well put together. 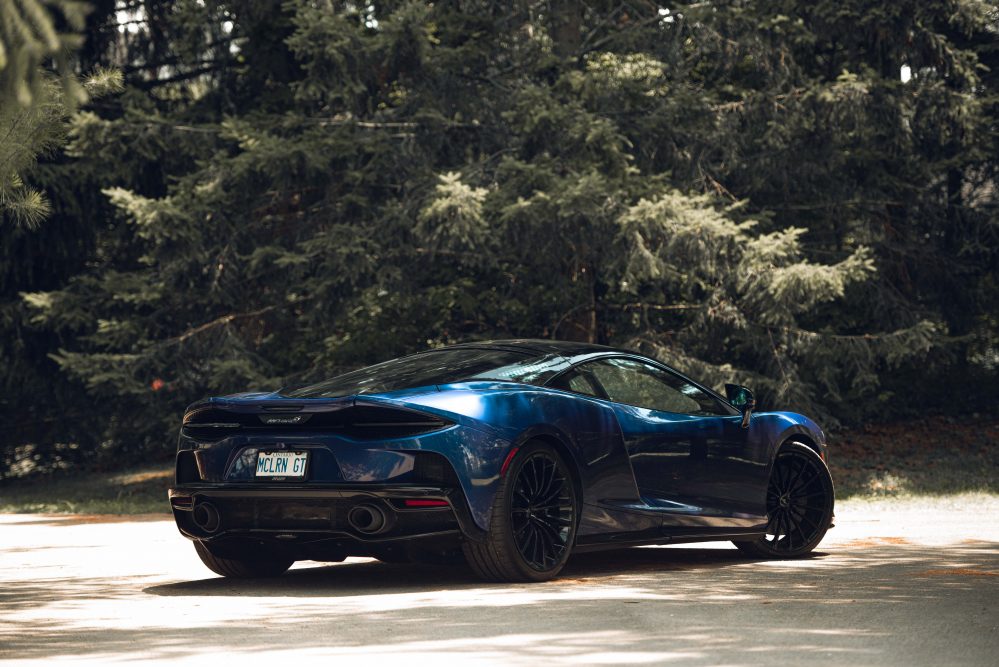 The car’s rear section really is its best asset, as it solidifies the McLaren look through that wide diffuser, thin taillights and massive exhaust outlets. Yet, the entire shape remains clean, modern, yet subtle and elegant. After all, that’s the goal, because the McLaren GT was never designed to flex its biceps on Montreal’s Crescent street during the Canadian F1 Grand Prix (will that ever happen again?), but rather provide its driver a smooth, relaxed and low-key experience. 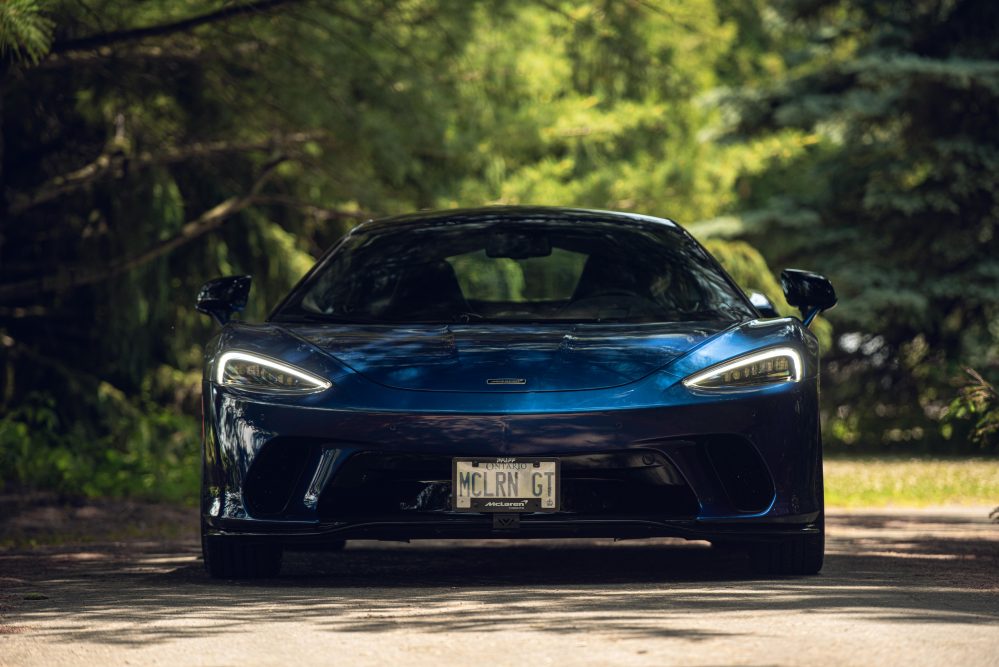 A typical GT buyer would presumably already be a McLaren customer, one who already owns a few top-spec supercars. That consumer appreciates this type of automobile for its performance and social status, but desires something a little more comfortable, toned down and practical; a vehicle to take out into the countryside over the weekend with their spouse. 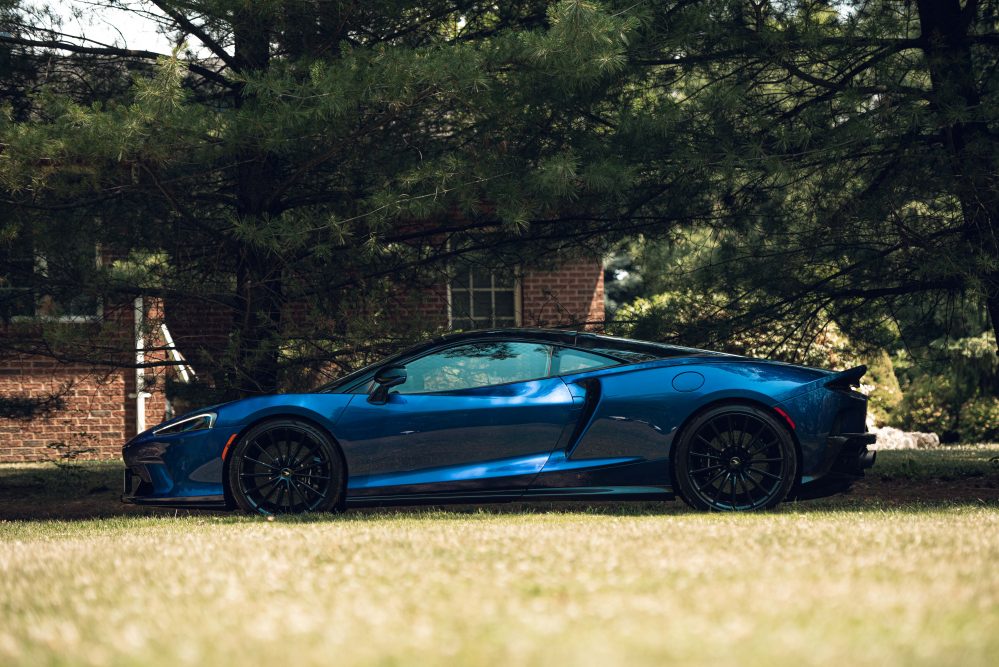 What you need to know though is that the GT is still a McLaren, which means it’s shockingly quick, race-car-precise and highly addictive to drive fast. Power comes courtesy of a mid-mounted twin-turbocharged 4.0-liter V8 good for 612 horsepower and 464 lb-ft of torque. With its 7,500-rpm redline, this masterpiece of engineering is bolted onto the chassis by way of specially designed engine mounts to quell vibrations. It’s mated to a seven-speed automatic gearbox that sends everything straight to the rear wheels. 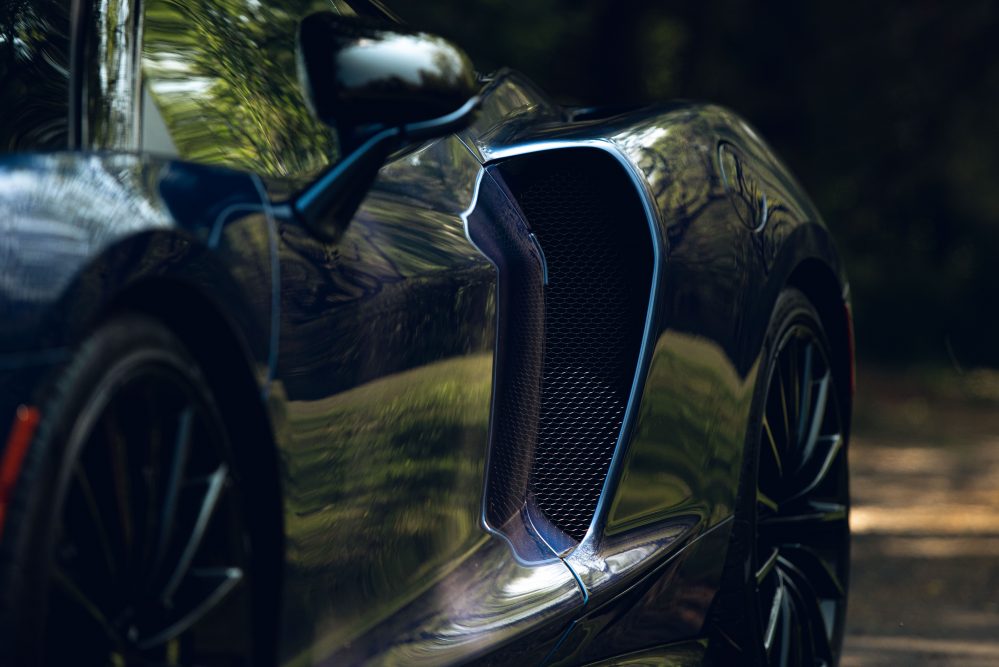 Such specifications allow this 3,384-pound wedge to launch from 0-100 km/h in a consistent three seconds flat, although some media outlets, like Car & Driver, have clocked it at 2.8 seconds. The standing quarter mile is performed in an equally mesmerizing 10.7 seconds, while McLaren claims the car will hit a 326 km/h top speed, no less. Perhaps, even more impressive, is the 6.1-second time to get to 160 km/h. That’s quicker than it takes a Honda Civic Si to reach 100 km/h. 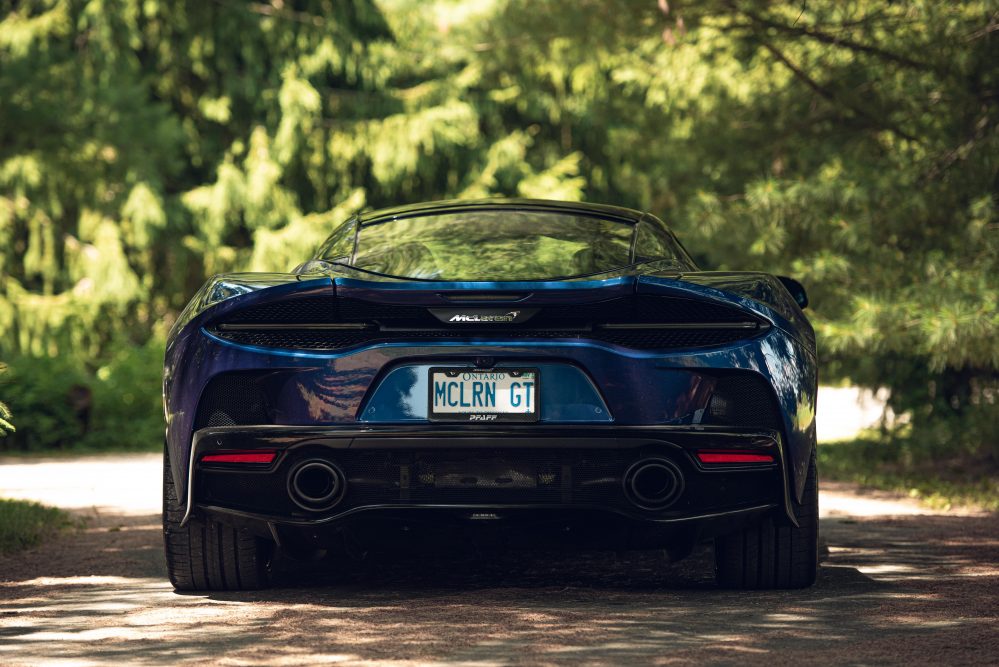 Although McLaren brags about the fact that the GT is among the most “affordable” car in its lineup, it’s still kicks off at $250,000, which puts it in the same price bracket as McLaren’s “baby” supercars, like the 540C and 570S. It’s also priced to compete against the Ferrari Roma, a similar kind of grand-tourer-ish supercar. My tester, stacked to gills with optional packages, was a hair under $300.000.

So Civilized, Yet So Brutal 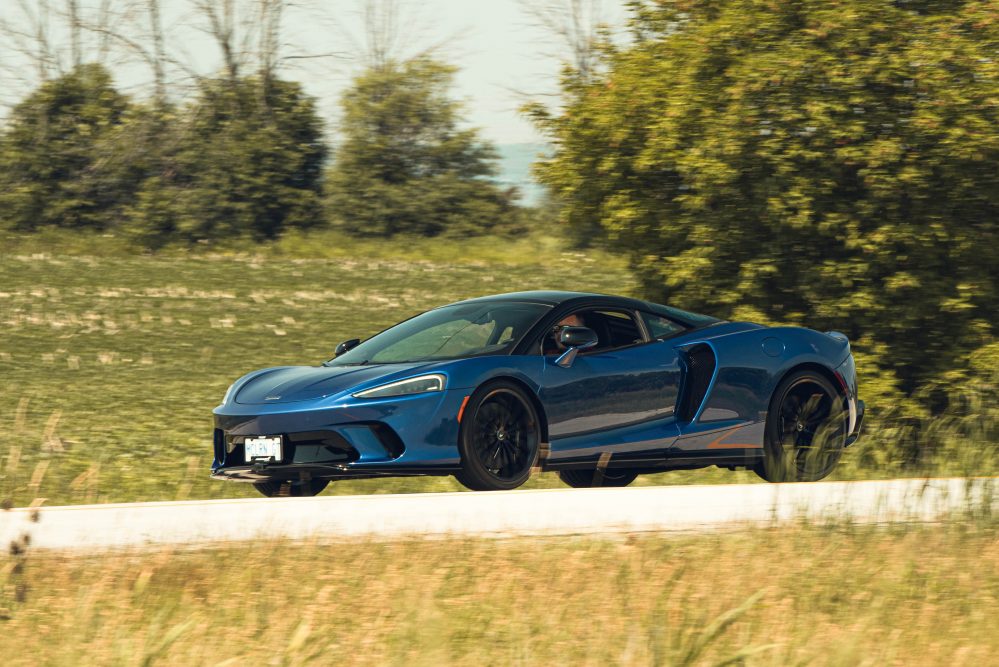 The following paragraphs are going to sound cliche as I’m going to rant about how the 2020 McLaren GT actually manages to merge supercar performance with the plushness of a grand tourer. You expected me to say that, right? But hey, guys, this thing does it better than most. 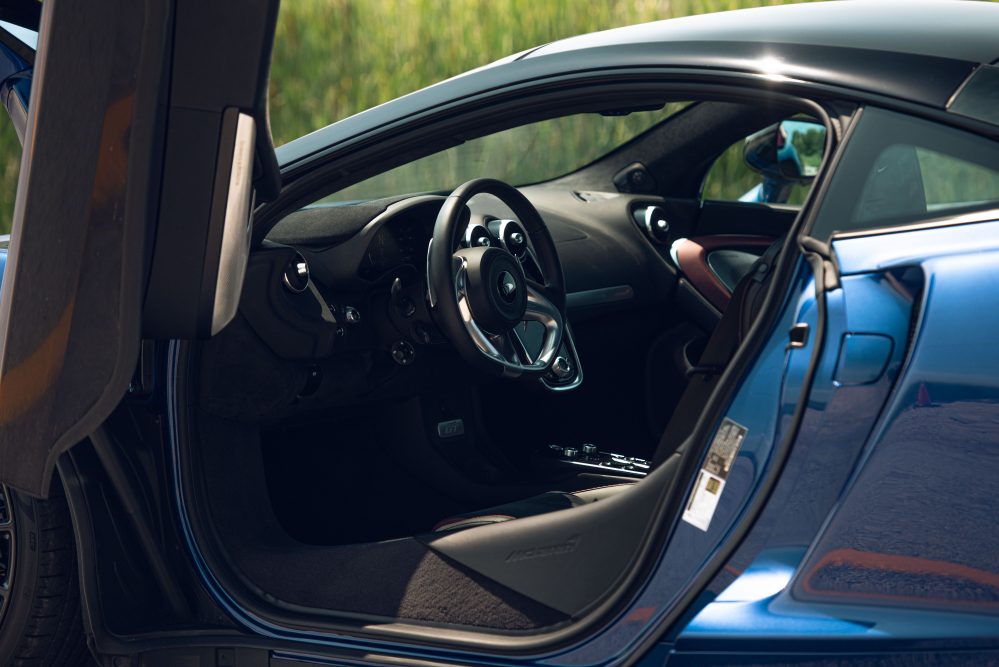 The McLaren GT’s best asset is precisely that; its ability to transition from an incredibly docile urban runabout to a savage and hyper focused land missile. The differences in character between the car’s drive modes are so prominent that you can’t help but admire McLaren’s engineering at play here. Around town, the GT’s suspension is compliant, just the right amount of soft, but still allows the car to remain ready to pounce. Also thank God for nose-lift technology, as it saved me a fair amount of scratches. Except McLaren’s annoying stalk to activate the feature isn’t what you would call intuitive. 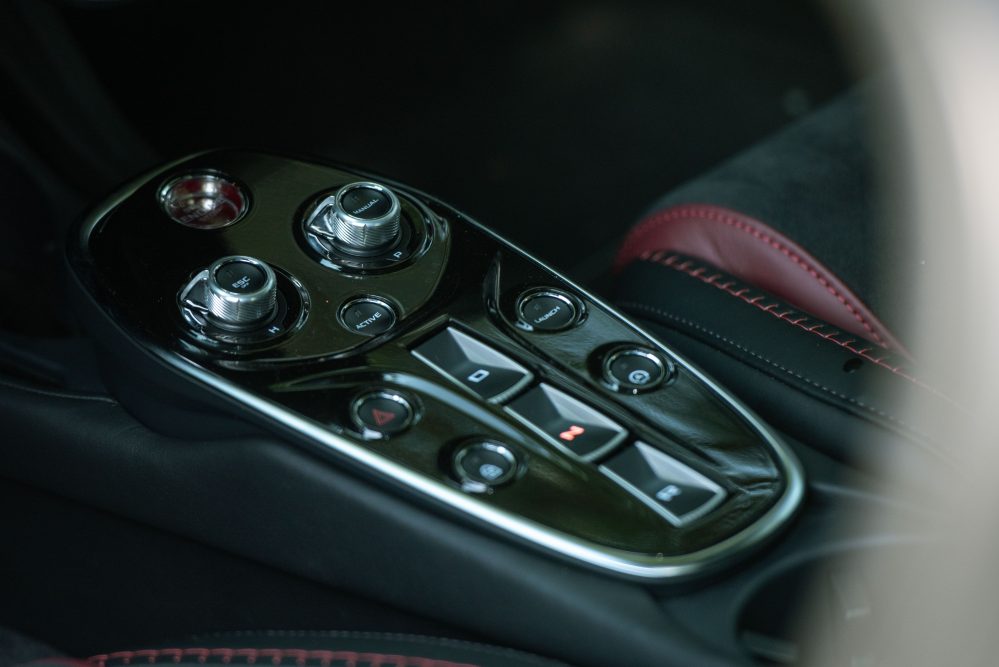 But the GT dominates urban driving, also due to the automatic gearbox’s ability to bury the engine with gears and let it burble in the background. Torque is massive, and one simply needs to flirt with the throttle pedal to overtake a bus. Visibility is also superb, both front and rear, and the seats are of utmost comfort and support. Entering and exiting a GT isn’t so much a back-bending affair as it is in, say, a McLaren 600LT.

It doesn’t feel like you’re falling inside a carbon fiber tub in the GT, but rather like you’re squeezing your way into a cozy cocoon of exquisite quality and craftsmanship. 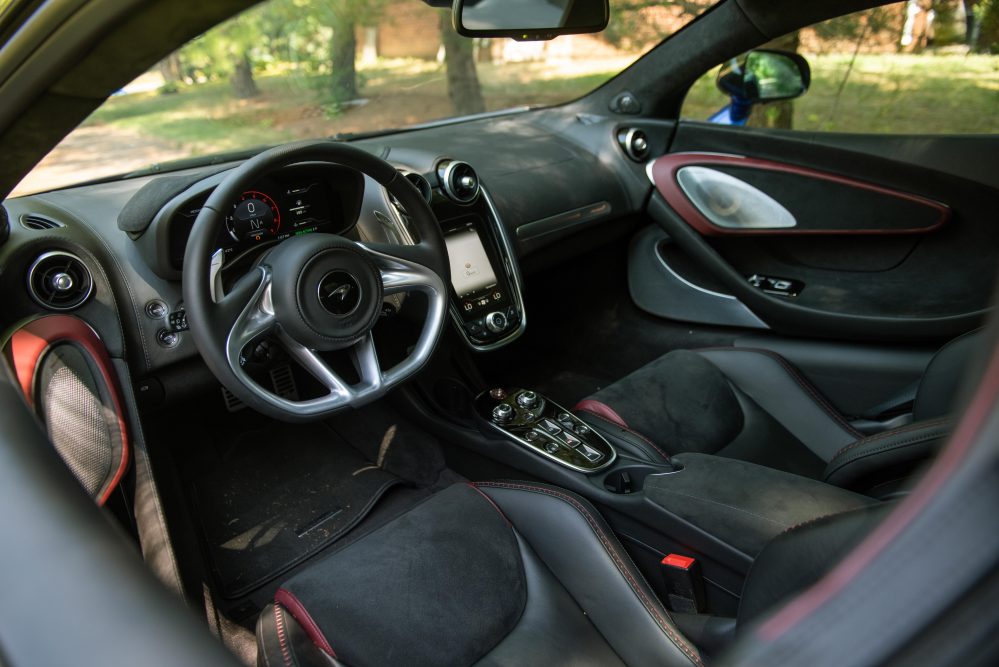 Once firmly strapped inside, you can’t help but notice the long, glass rear window from the rear-view mirror. That’s actually where the McLaren GT’s massive trunk sits, between that window and the engine compartment. McLaren claims GT is the most practical supercar currently on sale, actually. 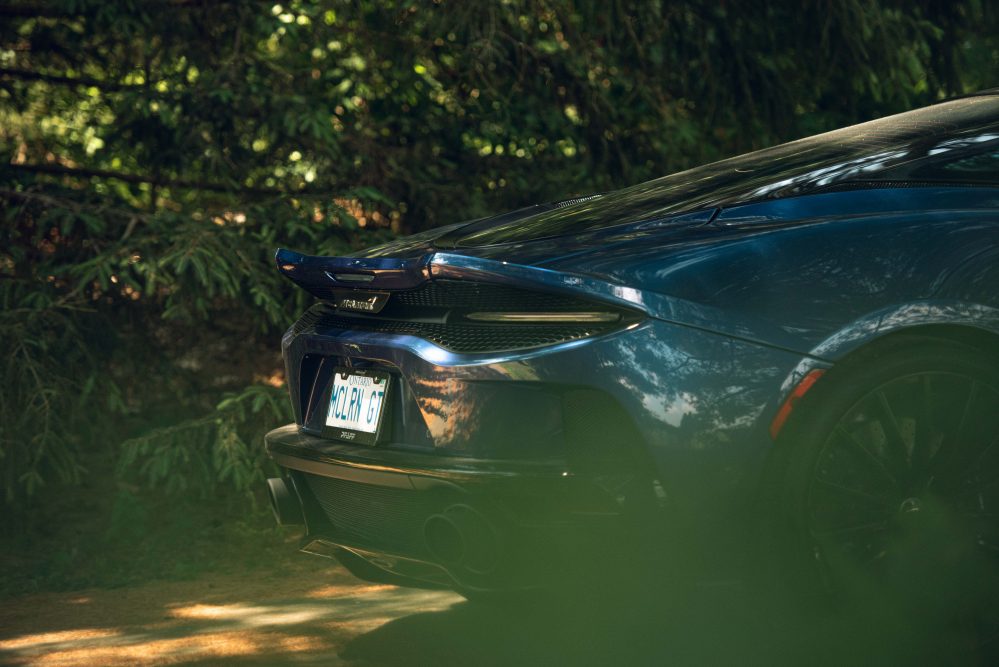 And it could very well be true. For instance, it’ll engulf up to 437 liters of your gear. To put things into perspective, that’s identical to the trunk of a Toyota Camry. We’ve never seen a supercar do that. At least, I haven’t. Then there’s the frunk (front trunk), which can swallow another 140 liters. 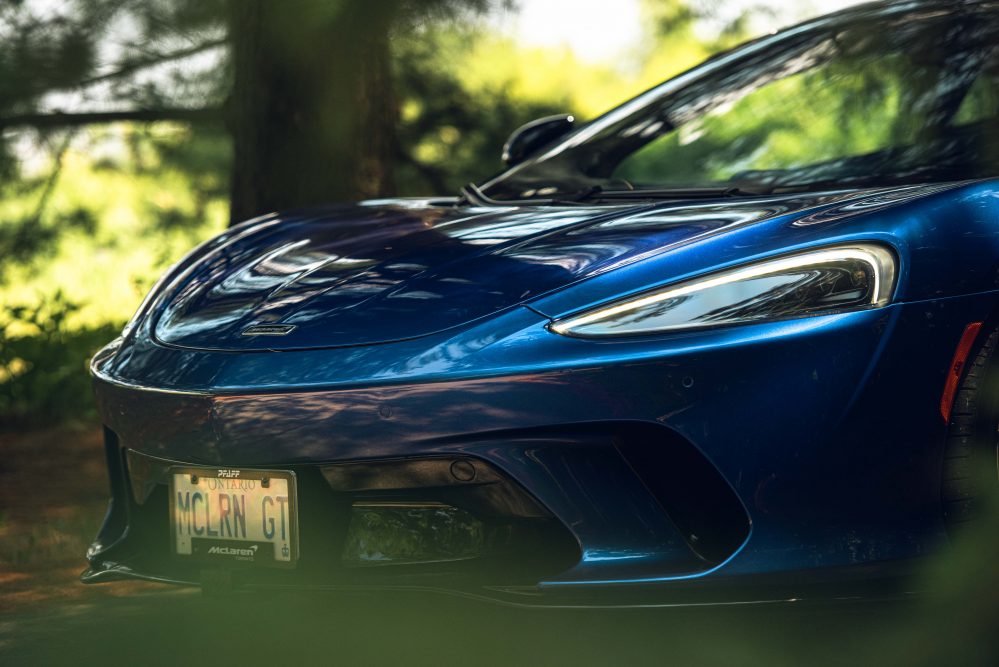 The only downside to having a trunk squeezed between a race-tuned twin-turbo V8 and a glass window is how hot it gets in there during summer drives. Just don’t try stuff a wedding cake back there and you should do well. 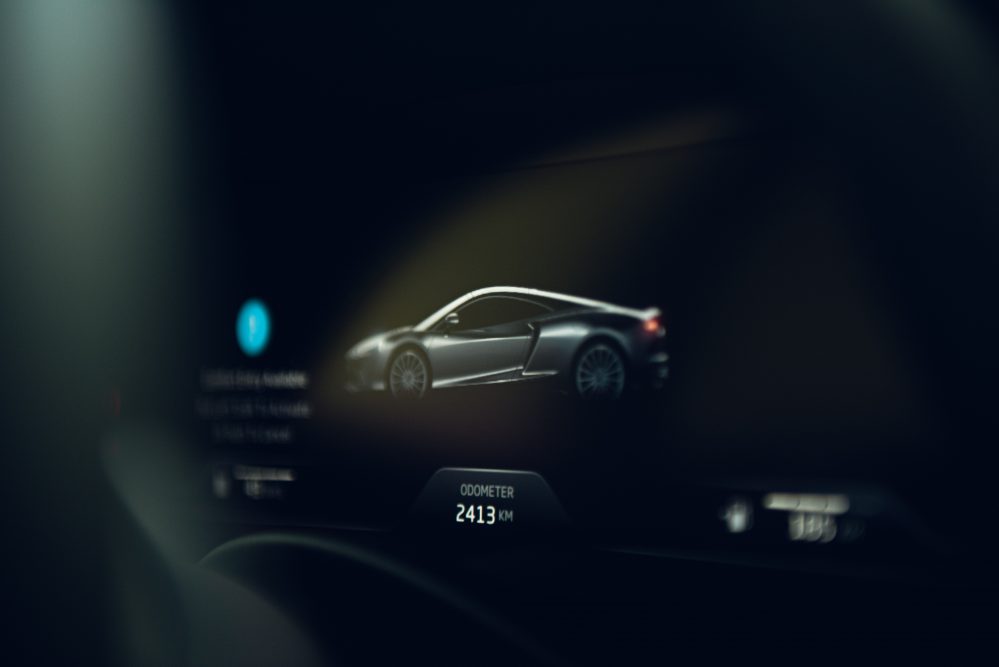 Once you’ve escaped the clutches of the urban jungle, and you’ve found a nice bit of road to let the GT stretch its legs, you’ll be treated to one of the most endorphin-inducing experiences very few production automobiles are able to provide. Activating Sport and Track modes is performed using the car’s “Active” switch. It’s a bit of a complicated affair as the system will only change modes if the switch is first turned on. Once the car gives you the ok, you’re free to independently adjust the car’s suspension from the engine and transmission. 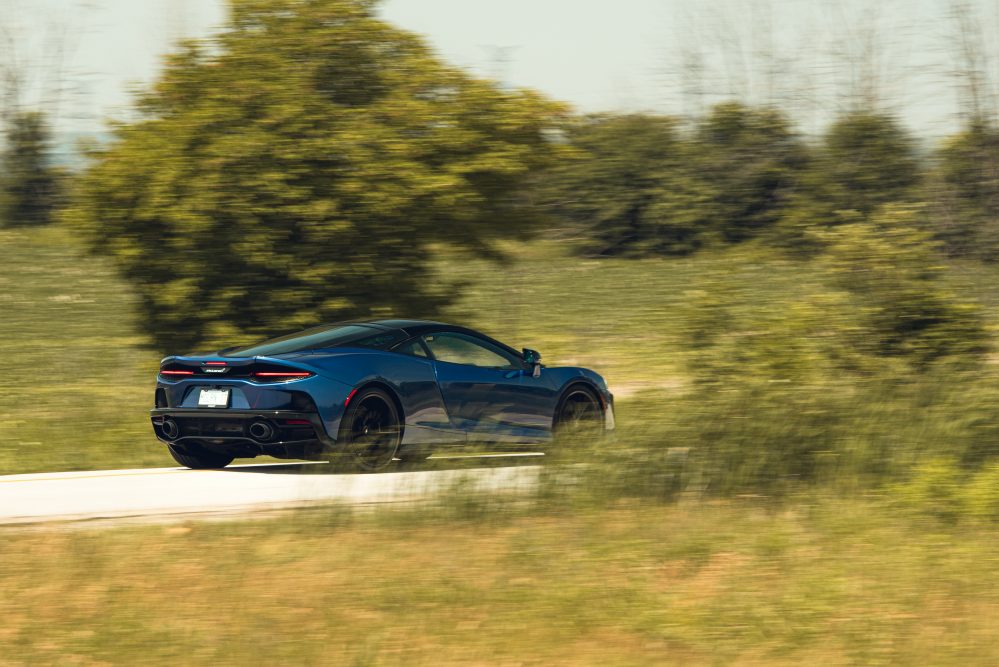 Like many supercars, Track mode is the car’s most savage setting, where its suspension firms up, steering wheel hardens, transmission goes in attack mode and the exhaust spews out flames. Ok, I made that last one up, but you get the picture. In Track mode, the GT suddenly reminds you that it is, in fact, a McLaren. Its tachometer transforms into a horizontal, formula 1-style affair, and the pops and burbles emitted from its massive tailpipes become considerably more prominent. 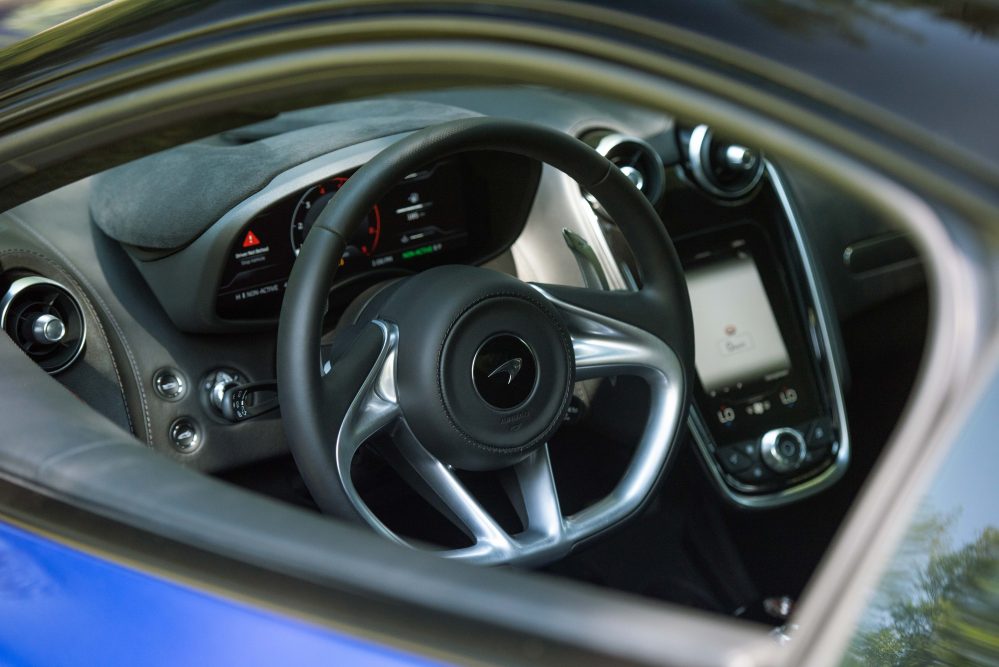 Pull the left column-mounted paddle shifter – which respond in the same rapid precision as a Playstation controller – and the car has selected a lower gear quicker than you can blink. Smash the throttle pedal and the GT eagerly rushes forward as a wave of instant torque overwhelms your senses. 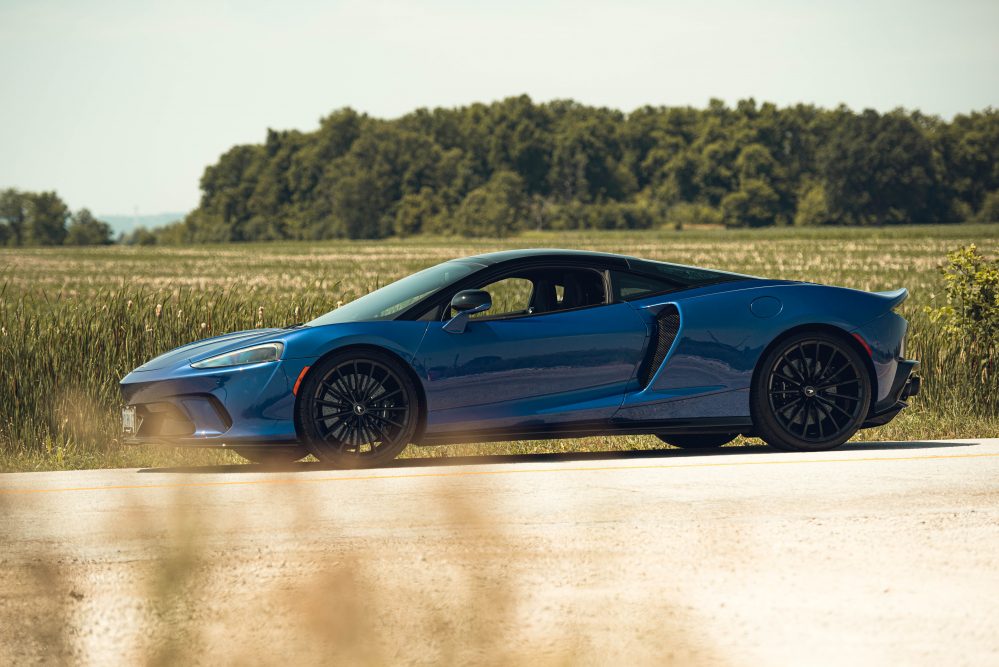 As speed climbs, that V8 changes its melodies, becomes louder, starts to shriek, and as you’re telling yourself the experience couldn’t be more intense, a second rush of power kicks you in the back of the head. It’s like a more visceral “VTEC just kicked in yo” moment where it feels like a second engine just joined the party. Saying the GT is fast is an understatement. It’s a fuckin’ rocket! 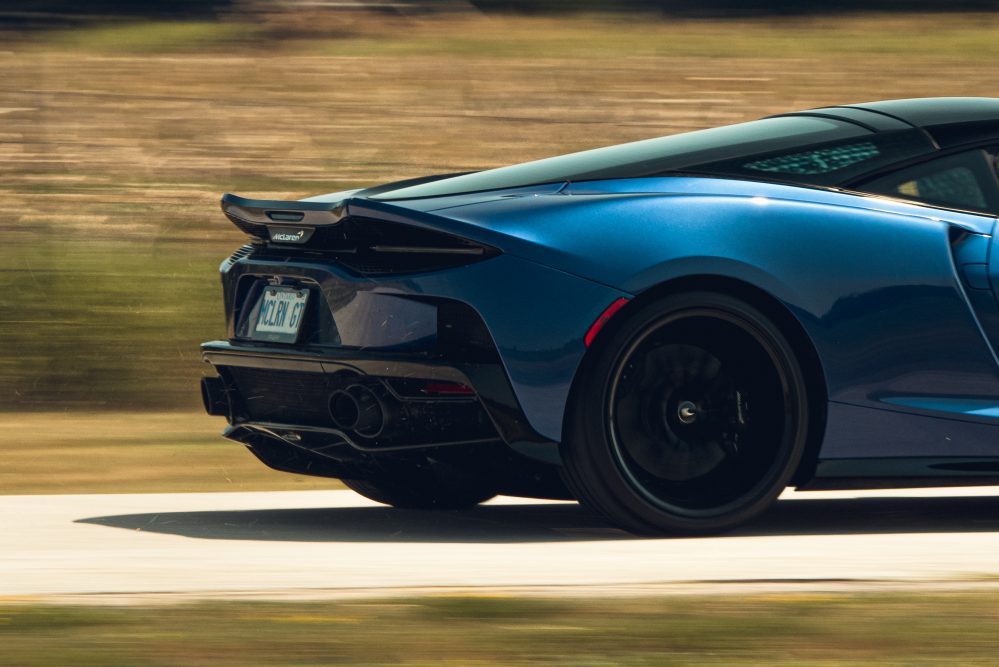 But where the GT really astonishes is in its ability to remain just as precise and quick to react as any other McLaren. The car responds surgically to the slightest steering inputs, and the levels of grip in the corners are tremendous. This is a car that’ll allow you to do very illegal things rather fast, so perhaps it’s a good thing that ain’t as flashy as other supercars out there. 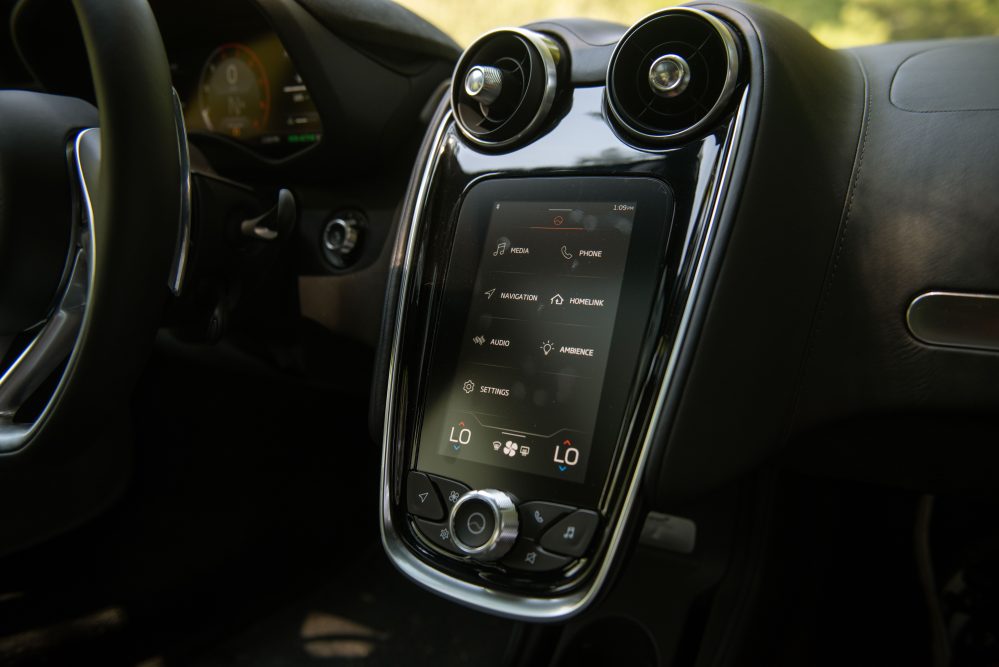 Does it have any faults? Well, yes, but then do you even care? I could say that the car’s interior ergonomics are a mess. Who ever thought messing with seat controls was a good idea? McLaren believes it can, but fails trying. And while that infotainment interface looks rather cool and high-tech, it’s actually rather complicated to use. Gets more distracting than useful actually. 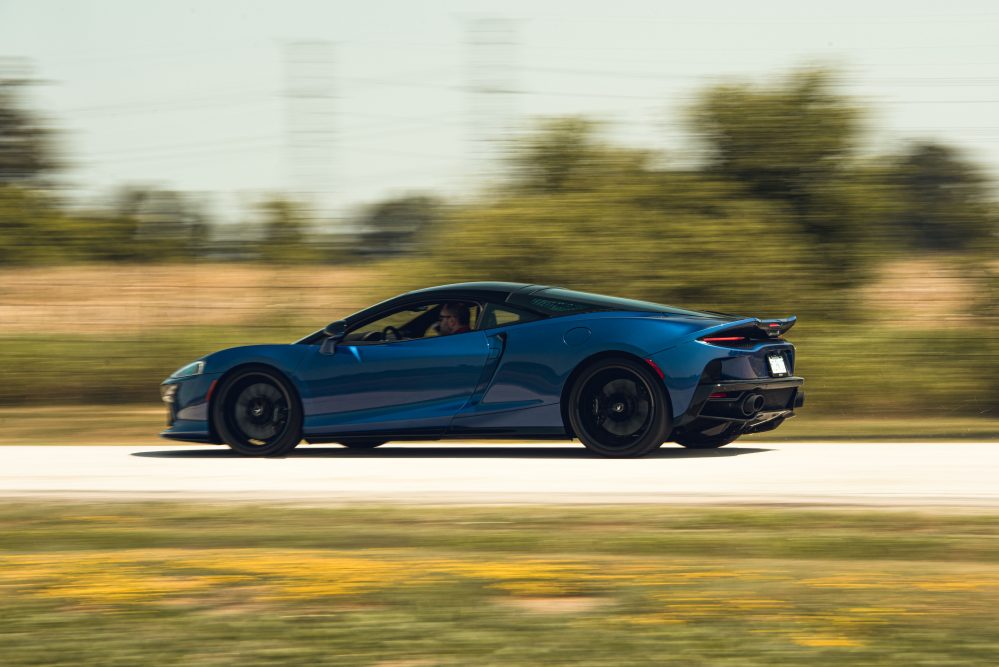 At the end of the day though, the 2020 McLaren GT does precisely what it was born to do: be a supercar and do superhuman things on a track, all while maintaining its driver’s back intact along the way. Impressive, no less. Hey, at least McLaren didn’t just default to an SUV like many would have done. Well played.

Review of the 2020 McLaren GT by William Clavey
Supercars