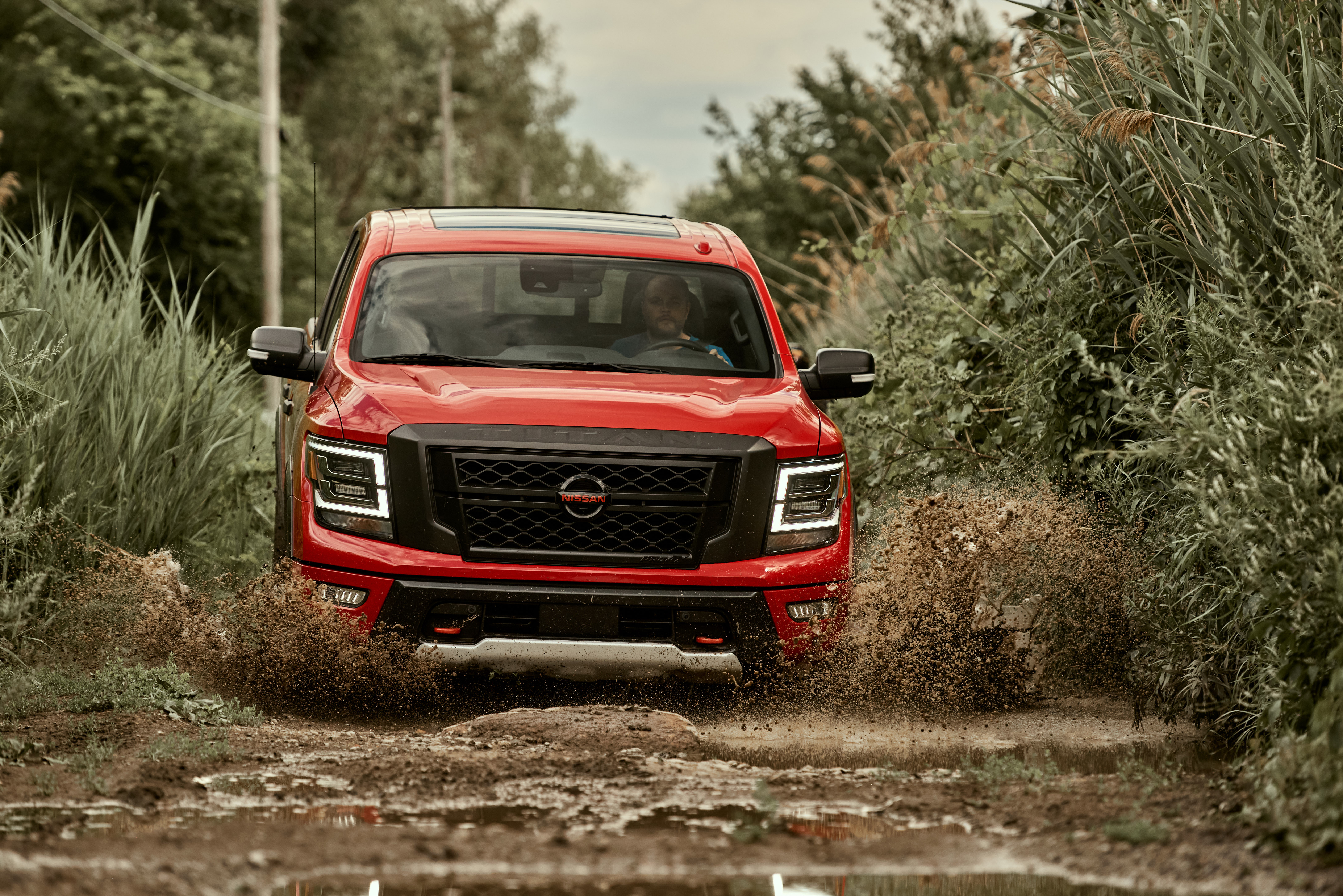 Moments before I started writing this review for the 2020 Nissan Titan Pro-4X, Nissan was announcing that the truck will leave the Canadian market in 2021. Great, so why the hell am I am even writing this for? What I was going to tell everyone is that in order for the Titan to remain relevant for consumers, it should have only ever been offered in this Pro-4X offroad trim. That’s really its best angle, and what, I believe, would have resonated better with truck buyers.

The Look Of Everything Else 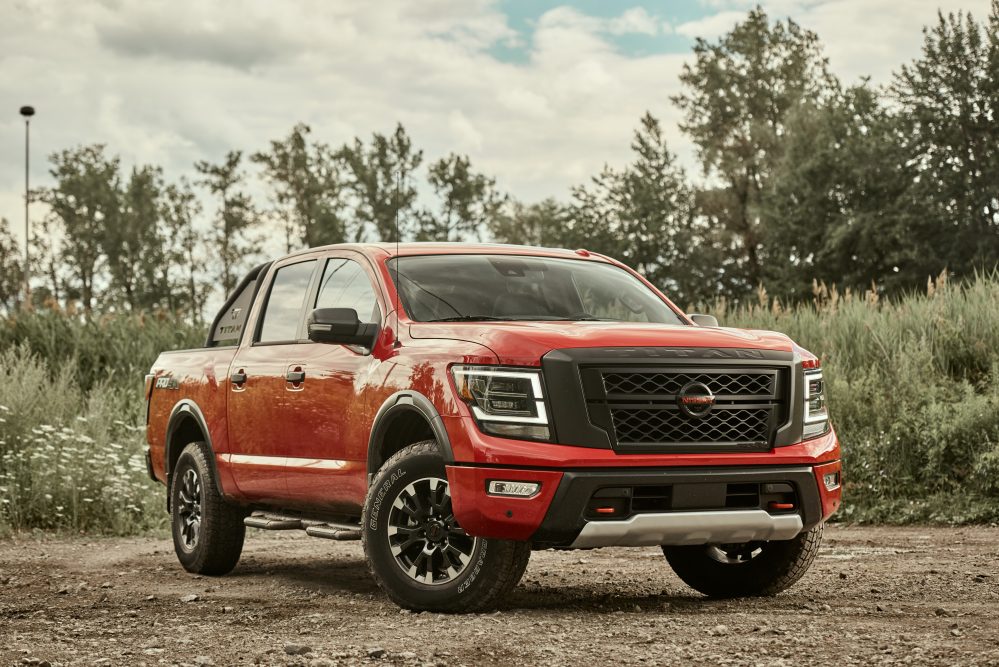 For the record, Nissan isn’t removing the Titan from its Canadian lineup because it’s a bad truck, but rather because it isn’t selling like it should. It’s actually a testament of how much the American brands are dominating that space, and how little room there is for the Japanese brands to compete. 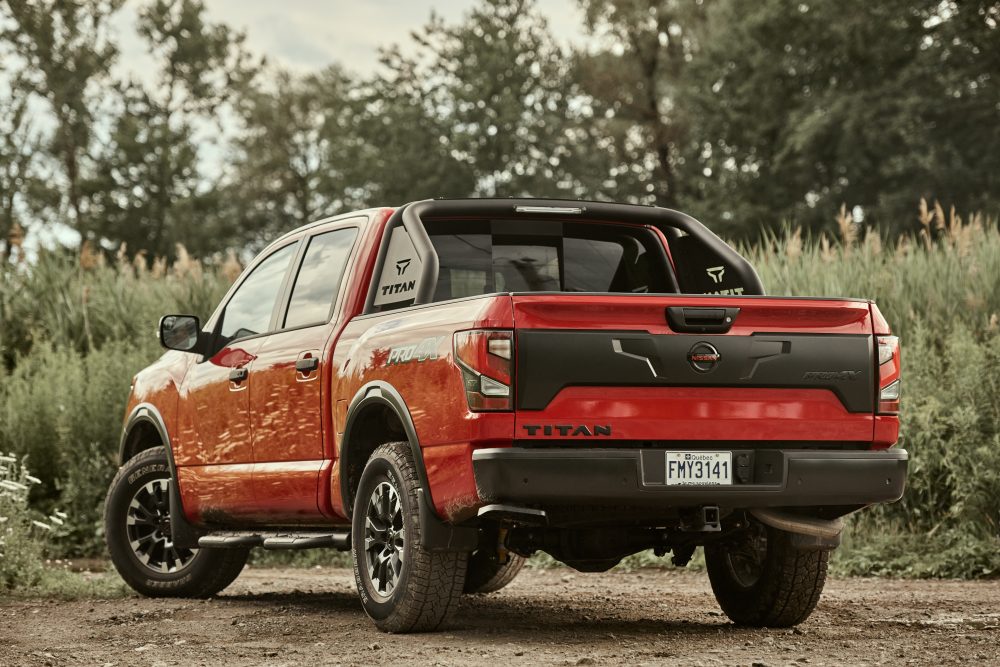 You’re probably also wondering why Toyota is still trying with the Tundra. Surprisingly enough, Toyota has managed to grab a small, but consistent pie with that thing. Nissan unfortunately doesn’t have Toyota’s loyal truck crowd, which is why the Titan is failing. And it’s too bad, because in many ways, the Titan is better than a Tundra. But people sadly don’t care. 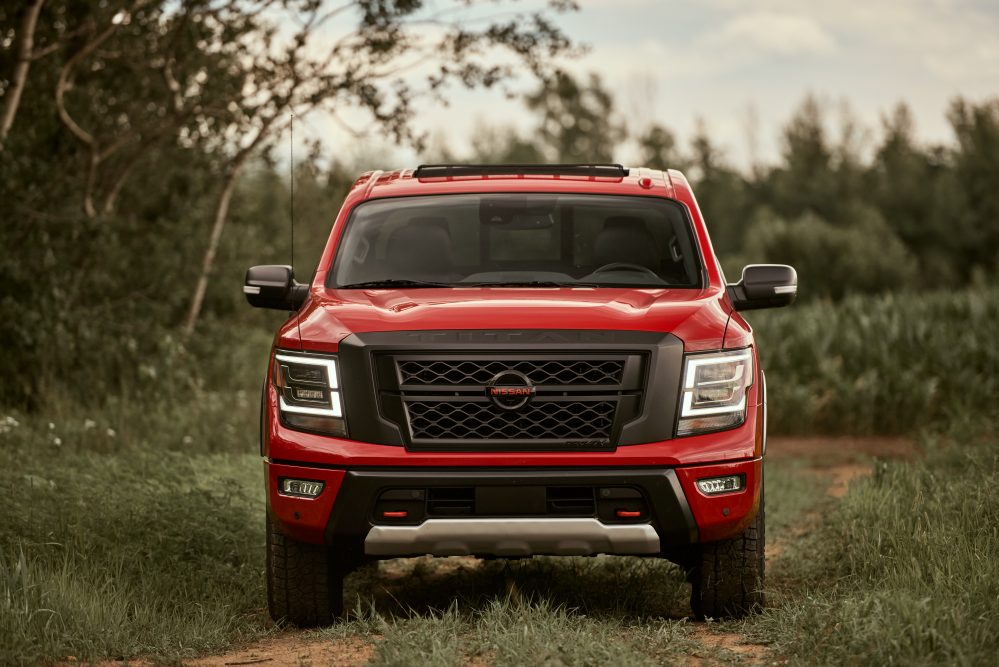 Anyway, I will say that I like the way the Titan looks. It was heavily updated for 2020, and this Pro-4X package, essentially the equivalent of a Tundra TRD Pro, a Ram 1500 Rebel or a GMC Sierra AT4, really gives the Titan a cool cool, fun and purposeful look. But then, it’s hard not to notice all the areas where Nissan tried to copy the American competition. 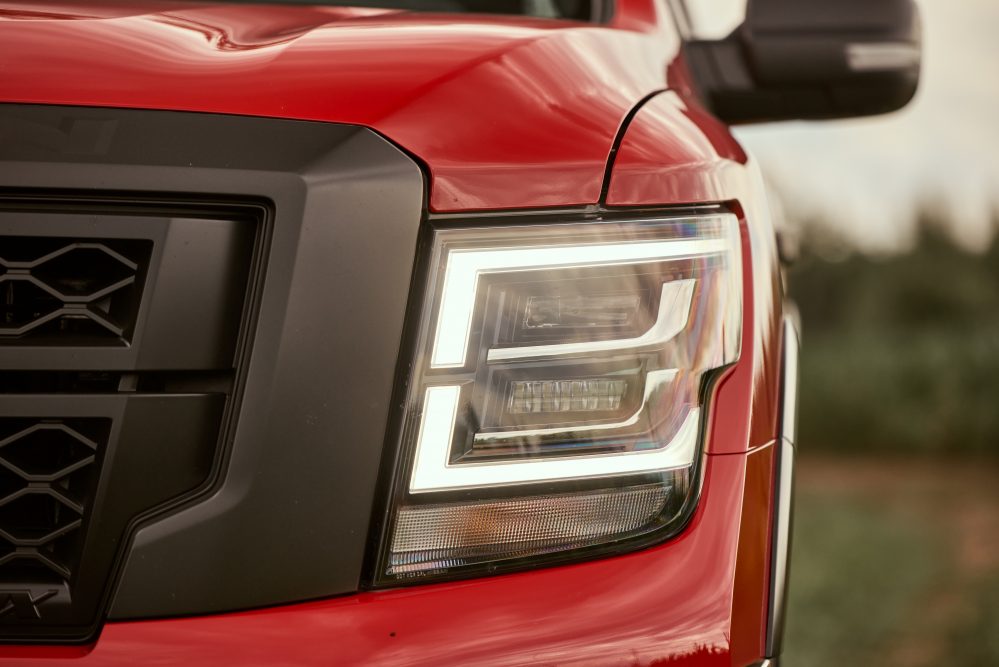 For instance, the front section looks like a crossbreed between a GM and a Ford, however I personally really like the design of those LED headlights. The side window design is all F-150, and the rear fascia, especially in Pro-4X trim, could fool even the most dedicated Raptor enthusiast. 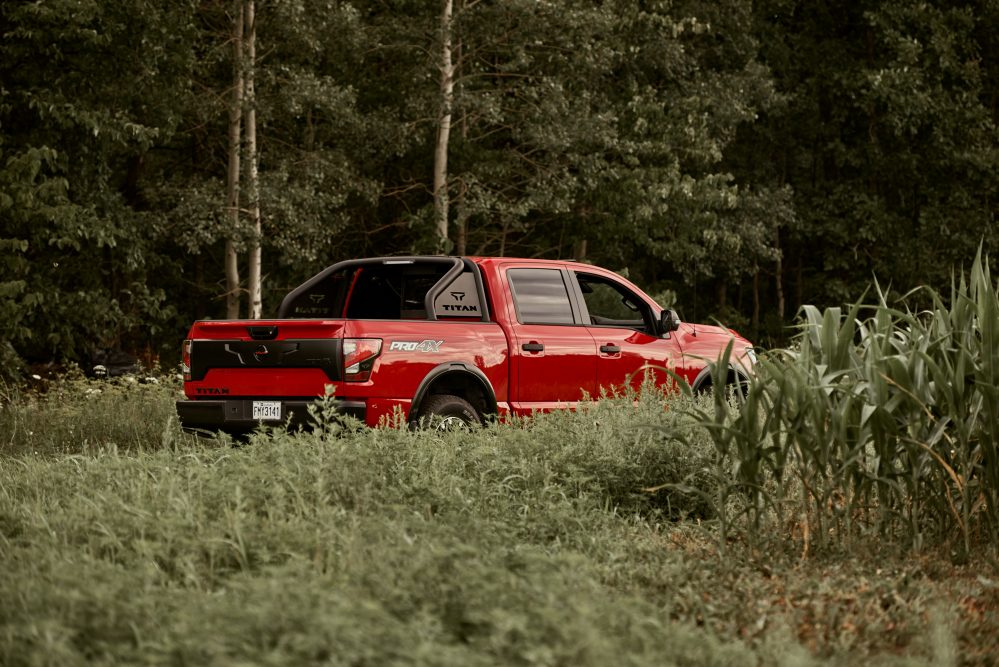 At least the Pro-4X package is worth your hard-earned money as it adds some significant off-road gear that do a lot to improve the Titan’s off-road abilities. Among them are upgraded Bilstein shocks with a subtle 2-inch lift, an electronic rear locking differential, off-road tires and skid plates to protect the transfer case, oil pan and radiator. 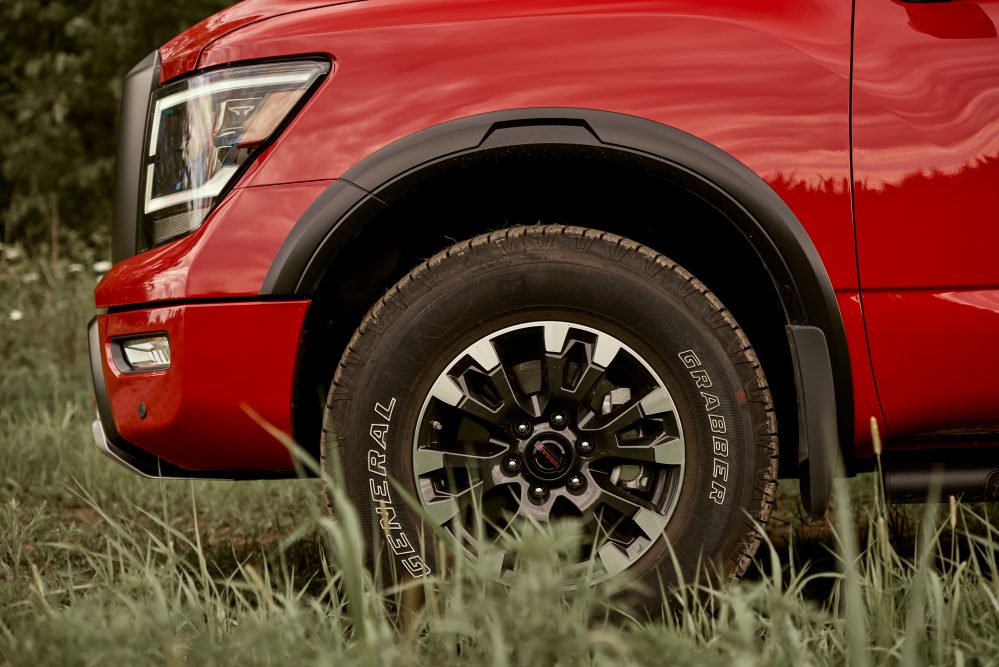 The package also adds model-specific 18-inch wheels, a revised front bumper with tow hooks, a blacked-out grille with red Nissan Logo, and a revised rear tailgate design. My tester had optional side rockers, and a rear-roll cage with an embedded Titan logo. It looks pretty rad. 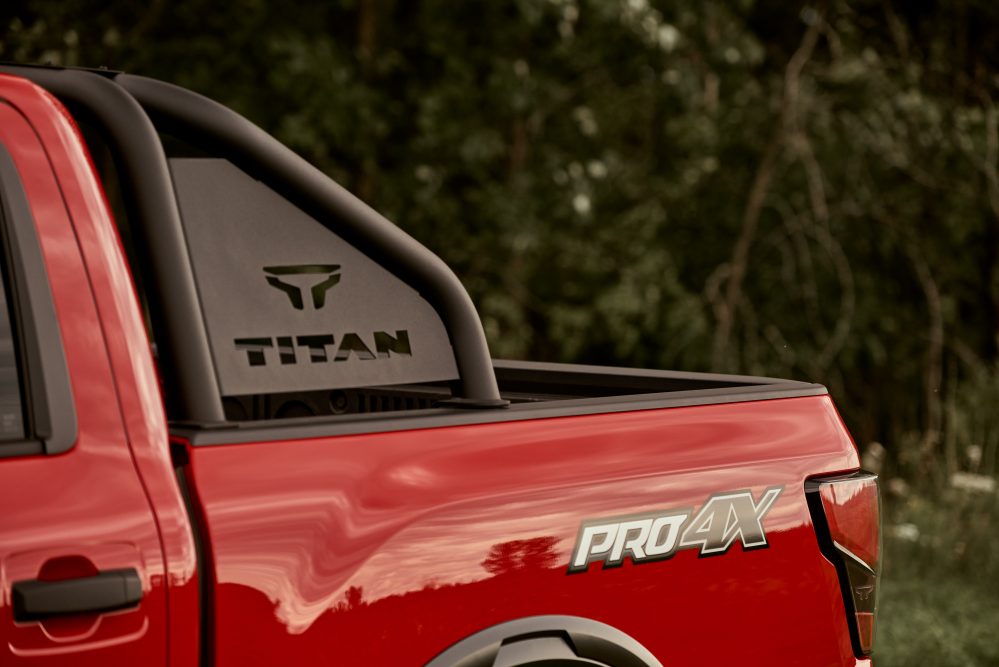 There’s only one available engine for the 2020 Nissan Titan (there’s also a heavy duty Titan XD), which, again, makes it less competitive out of the box. At least, power comes from a rather good 5.6-liter V8 that cranks out a healthy 400 horsepower and 413 lb-ft of torque. It’s mated to a revised nine-speed automatic transmission. 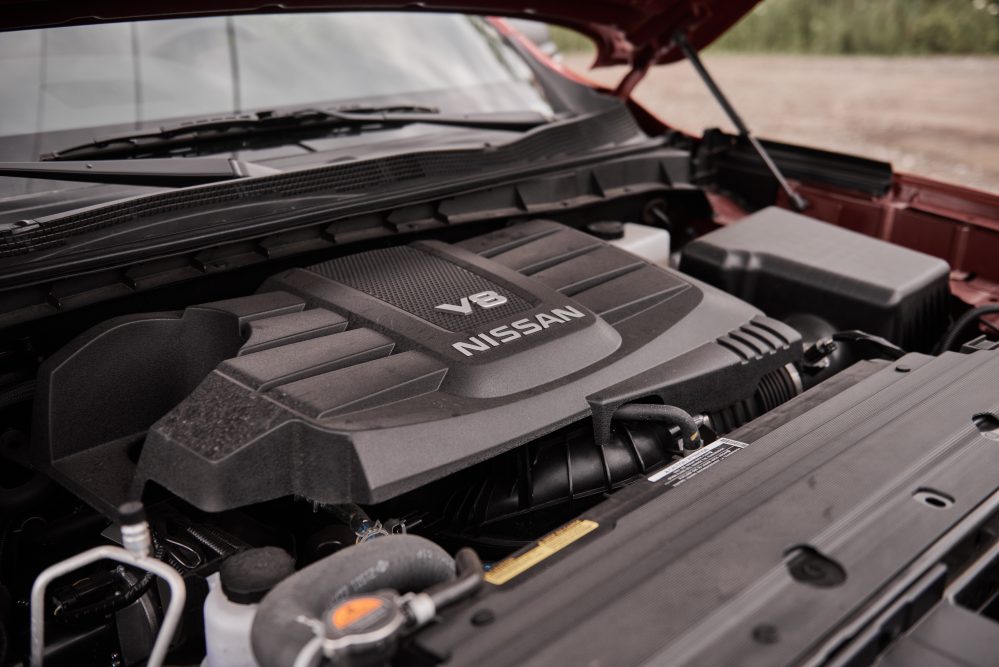 The Pro-4X obviously comes standard with all-wheel-drive, for a starting price of $66,443. My tester was of course the top-spec Pro-4X Luxury model which came with all the bells and whistles in the book for a final MSRP of $71, 943. That’s way too much for a Titan. I recommend sticking with the base Pro-4X if you want to make a good deal.

Throw It In The Mud? 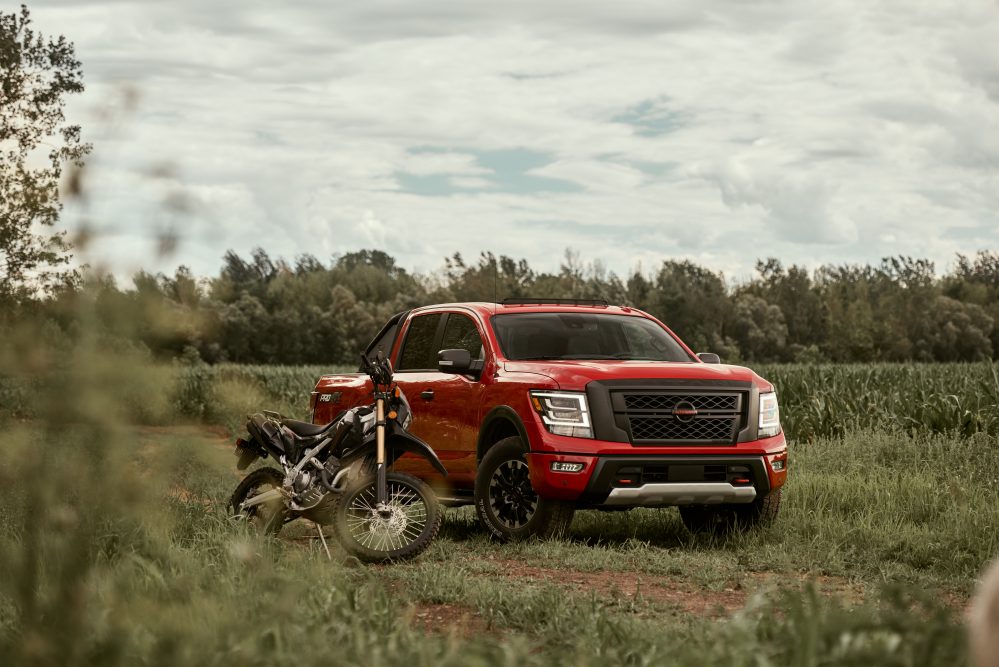 So, now that I know that the Titan is leaving us, it’s become rather irrelevant to compare it to its American competition. I mean, sure, it’s a very well built truck, and it has more standard power out of the box as all of its direct rivals. Very reliable too! And when you compare it to a rudimentary Tundra, the Titan comes through as a much more modern, sophisticated machine. 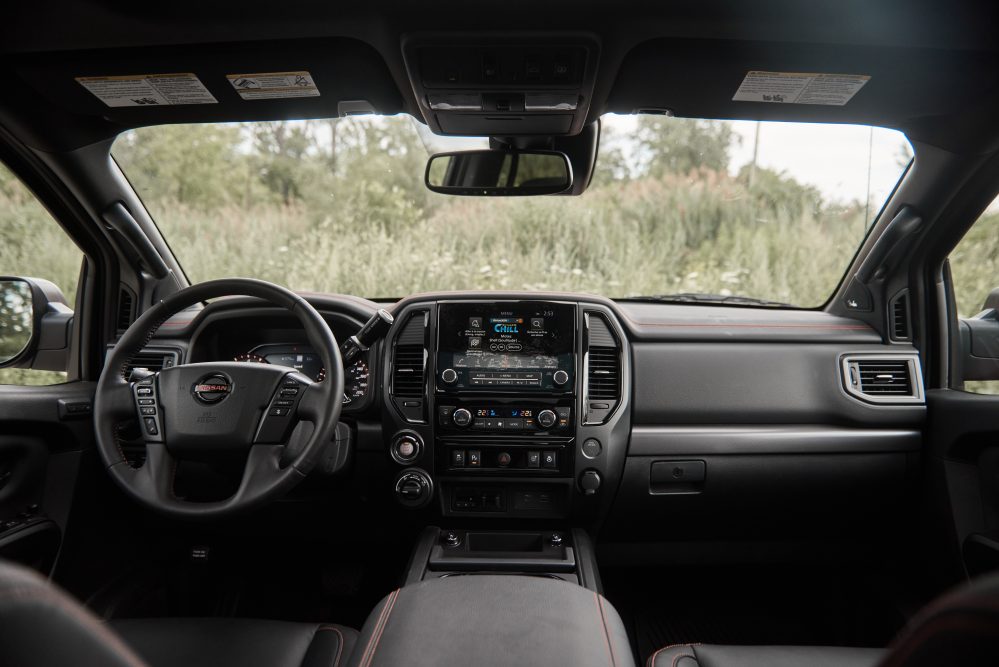 But the cold hard truth is that the American trucks offer so much more configuration possibilities that the Titan’s best efforts feel undercooked. Ford, GM and Ram also understand truck buyer needs better than any Japanese brand can, which is clearly apparent from the Titan’s lukewarm ergonomics and weak use of storage space. Max towing ratings for the Titan is also disappointing at 9,240 lb. Even the outdated Tundra can pull more than this Nissan. 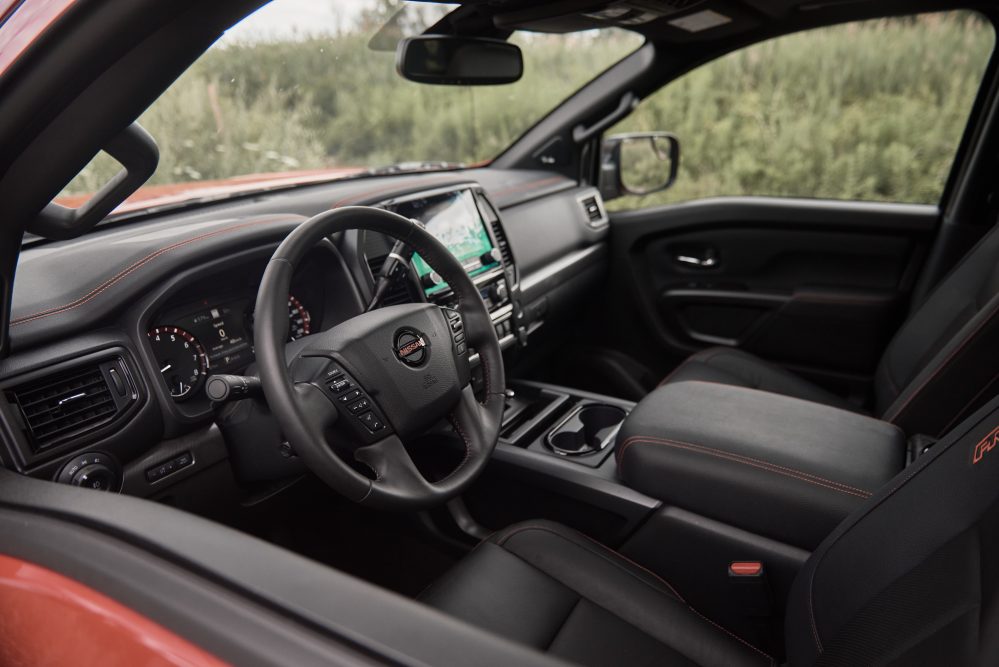 I actually used the Titan for a long trip from Montreal to Québec’s magnificent Gaspesie region, and I was pleased by how comfortable its front seats are during long rides. The Titan also has spirited acceleration, power is ample and that V8 sounds absolutely amazing. I reckon it’s a better unit than all the current American V8s currently in production. The nine-speed gearbox is smooth and the damn thing even handles alright. 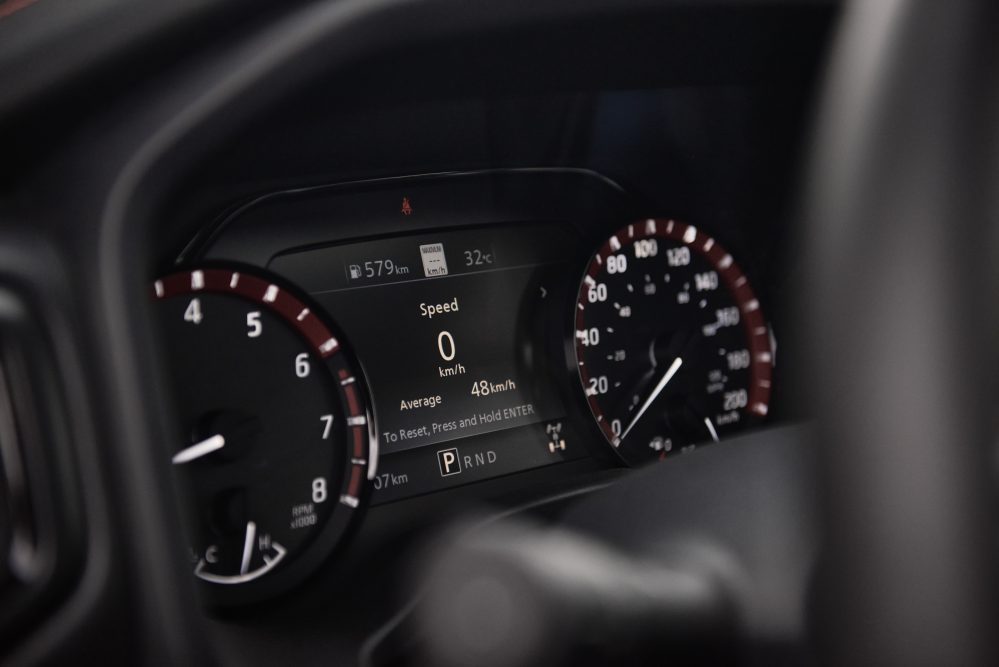 To my surprise, the Titan’s fuel economy average wasn’t all that bad neither. I averaged a solid 11.8L/100 km with mine, which is way better than a comparable Toyota, but still behind some more sophisticated American rivals from Ford, GM and Ram. 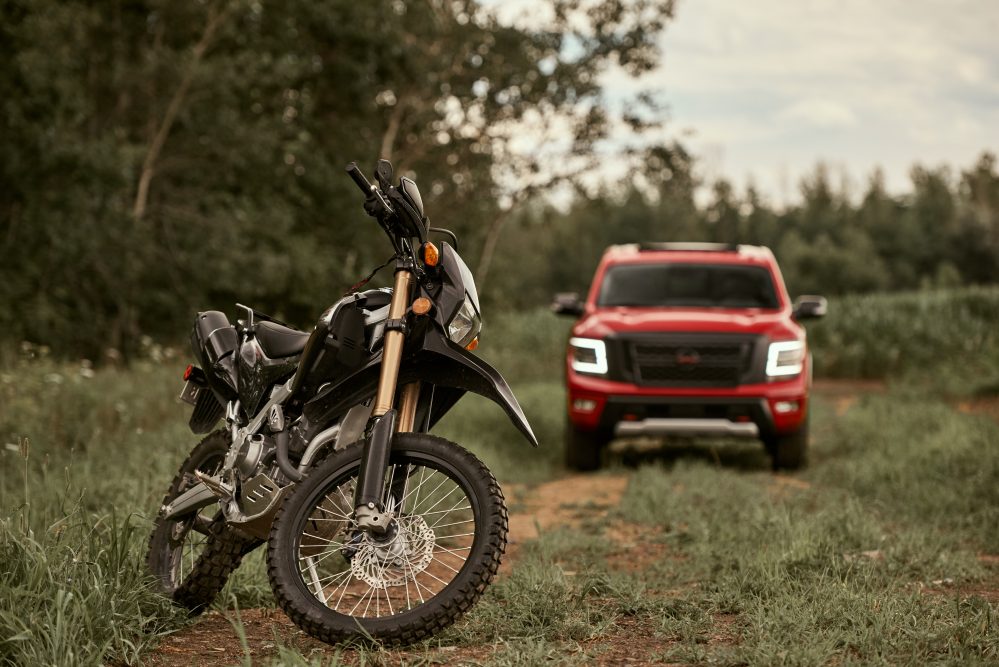 Yet, as good as the Titan is, I couldn’t find solid arguments to recommend it over its Detroit-based rivals, so I did what any good automotive journalist does by calling a friend who owns a 2019 Honda CRF dirt bike and have him follow me in a muddy trail. I figured if the Titan can go where his bike can, it’s at least worth considering on your shopping list. 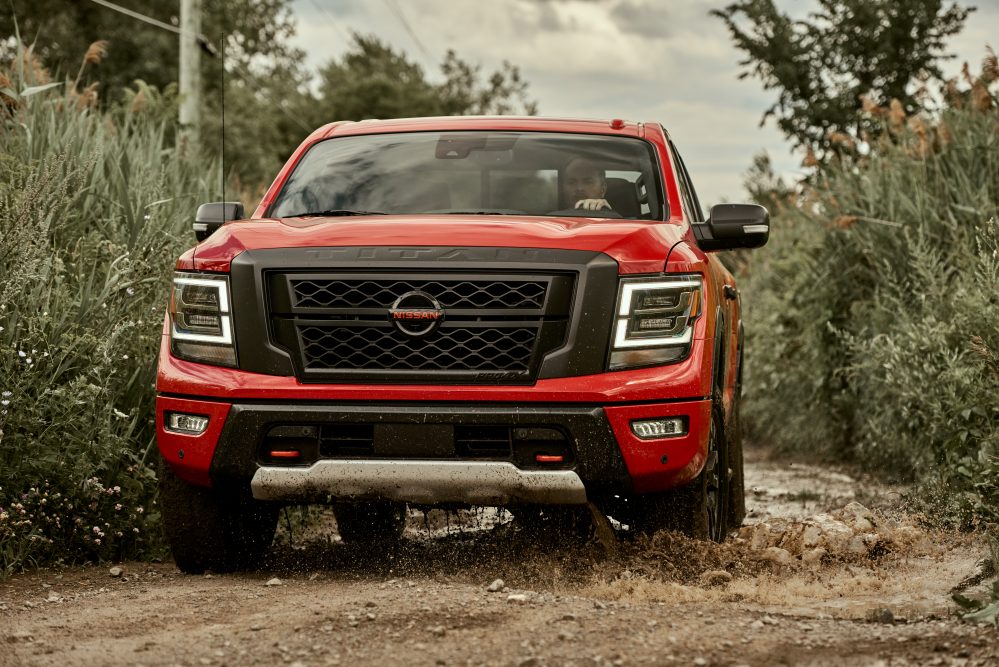 That, off-roading, is actually where the 2020 Nissan Titan Pro-4X impressed me the most. I took it where I take all of my trucks to test their adventure-ready toys. You may remember the location for such reviews as the 2020 Chevrolet Colorado ZR2 Bison. The location is perfect for trying out my test vehicles as it’s just the right amount of rough to get a rig stuck in a muddy chasm, but won’t break the vehicle neither. 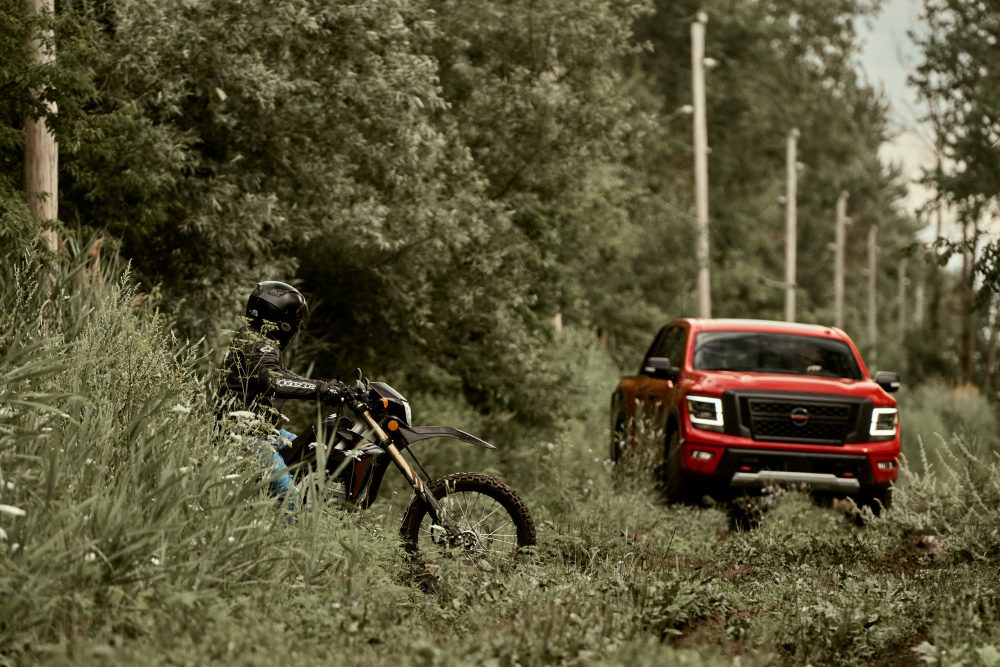 Where the Titan performed better than both the big Ford and the small Chevy was in its ability to let its driver flog it hard in the trail without fear of breaking it. Of course, it doesn’t quite match the articulation of a Jeep Wrangler, but the Titan’s great chassis, combined with the instant throttle response of its V8 engine revealed a full-size truck that’s more agile than its American counterparts. 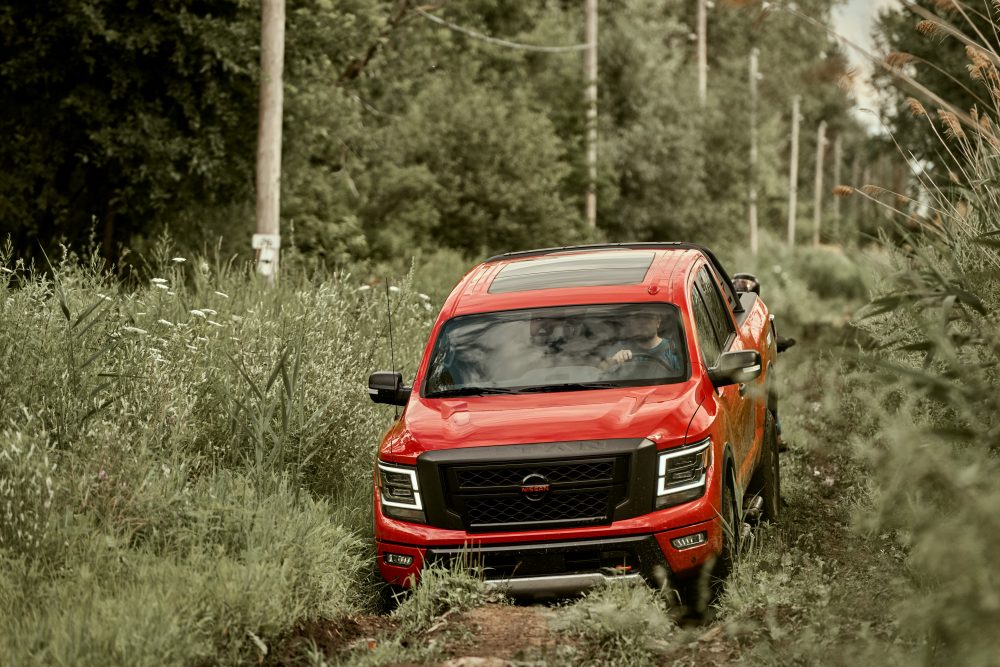 The General Grabber tires Nissan had fitted my tester with were also the best possible shoes to get this big guy out of muddy holes, and the skid plates, which I rubbed a few times, made sure the oil pan didn’t spill its guts on a rock. 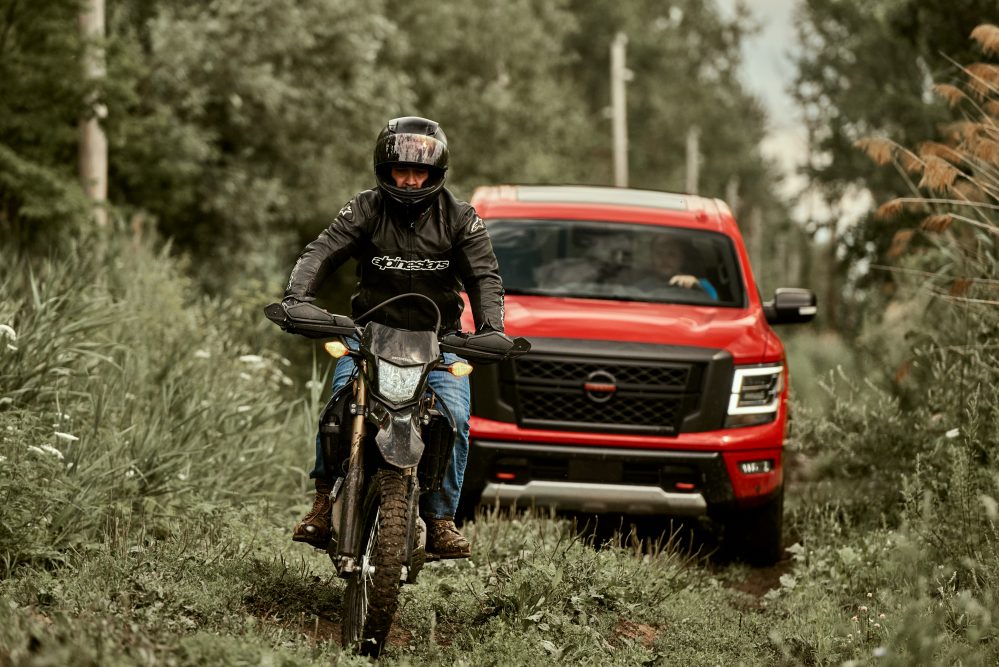 Perhaps this is what the Titan should have been from the start; a go-anywhere machine that Nissan could have improved over time so it could mutate into its own niche product. I mean, after all, we all remember Nissan racing its truck in Baja events. 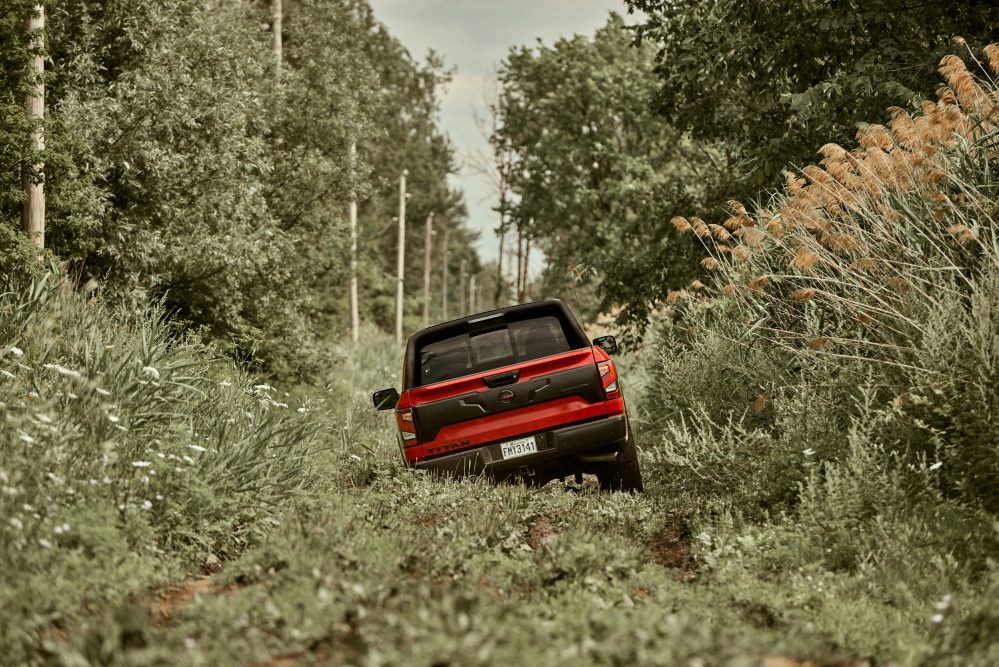 Bringing that off-roading know-how to the mainstream stuff could have helped the Titan sell a little better. Because the Titan’s demise has to do with the fact that Nissan felt too confident by attempting to penetrate a segment it didn’t  yet quite understand. 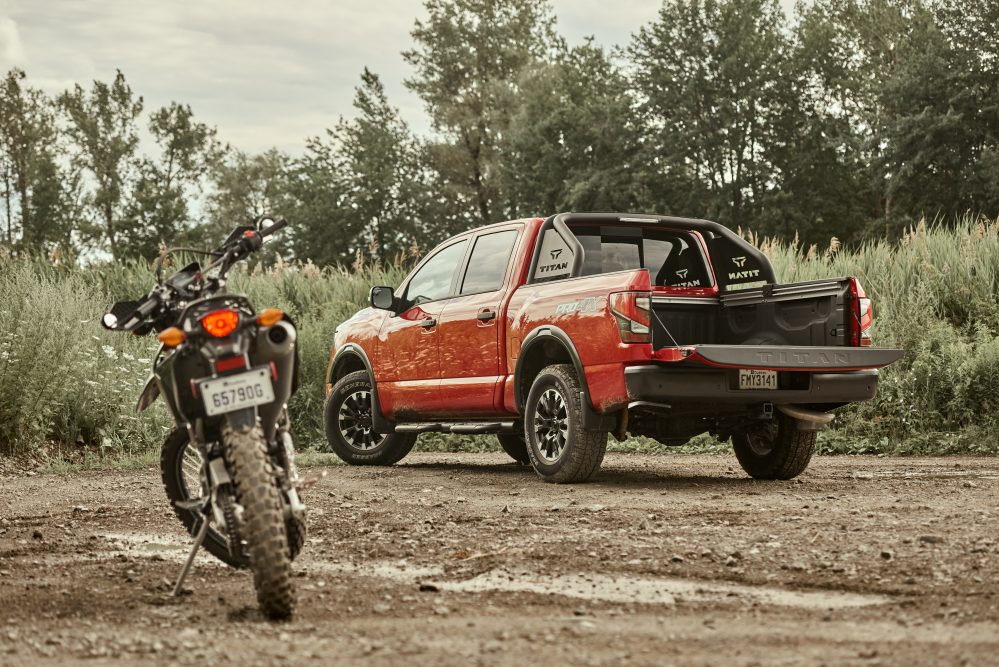 Sadly, my recommendations for this thing are the same as the Infiniti Q50. Get one only if you get a solid deal on it, which you will, because Nissan Canada will soon do whatever it can to get them off dealer lots. In 15 years or so, we’ll look back at the  Titan as yet another one of those fantastic vehicles that never really picked up. Mark my words, a Titan Pro-4X like the one you see here will definitely become a future classic.