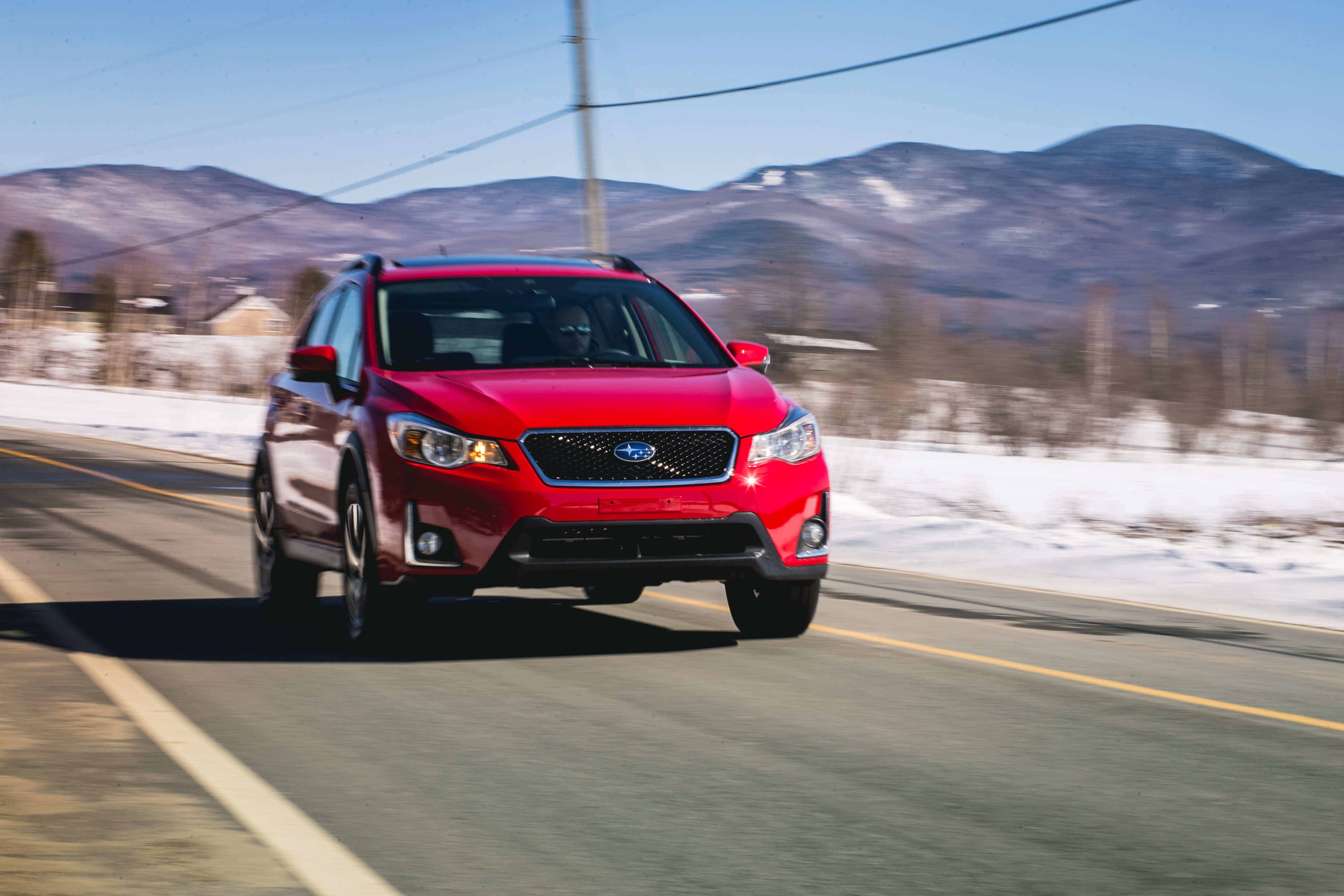 These days, I feel that once you’ve driven a Subaru, you’ve driven them all. In a sense, that’s not entirely wrong, since there are in reality only two cars in their lineup, the Impreza, and the Legacy, which take the responsibility of underpinning all the other models (the BRZ is a joint venture with Toyota). But after getting out of the very brown, and CVT-induced Forester I reviewed for Jalopnik, getting inside this red Crosstrek Kazan edition with a manual transmission actually felt like I was driving something new, fresh, and kinda different.

The best part about my time spent with this Subaru is that I was finally able to sample one in the snow. So far, each time I’ve driven a Subby, Mother Nature somehow decides to keep all the snow for herself. Luckily for me, the province of Québec got hit with as massive, 50 cm blizzard during the week I had my Crosstrek. So not only did this little crossover thing keep me safe and alive during the storm, I was finally able to see for myself what the fuss is all about with Subaru’s acclaimed all-wheel drive system. 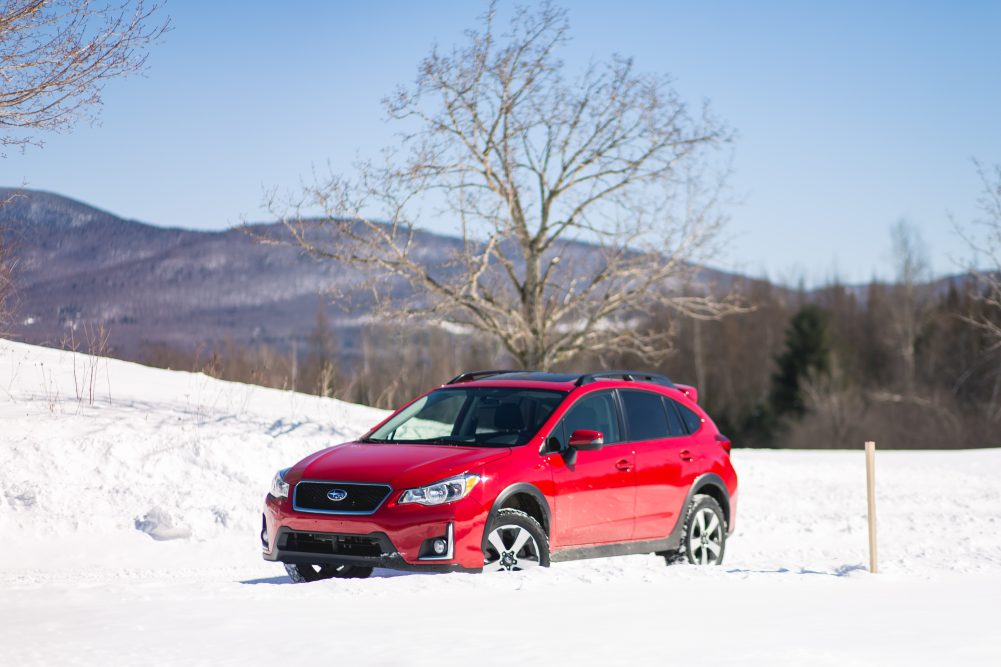 So, what exactly is a Crosstrek Kazan edition? Before I answer that question, let’s first talk about what the Crosstrek is. It’s definitely different, and in tune with the times. While everyone is rushing towards crossovers of all shapes and sizes, Subaru believes there’s room for a different kind of utility vehicle, something a bit sportier, smaller, and more carlike. Mind you, Subaru has been at it for quite some time with this sort of vehicle. There was the bread-box Loyal in the late eighties, as well as the Impreza and Legacy Outbacks of the nineties. I think it’s fair to say that Subaru’s idea of taking a popular car in its lineup, jacking up its suspension, and adding larger wheels, plastic cladding, and a roof rack has proven rather successful in the past. 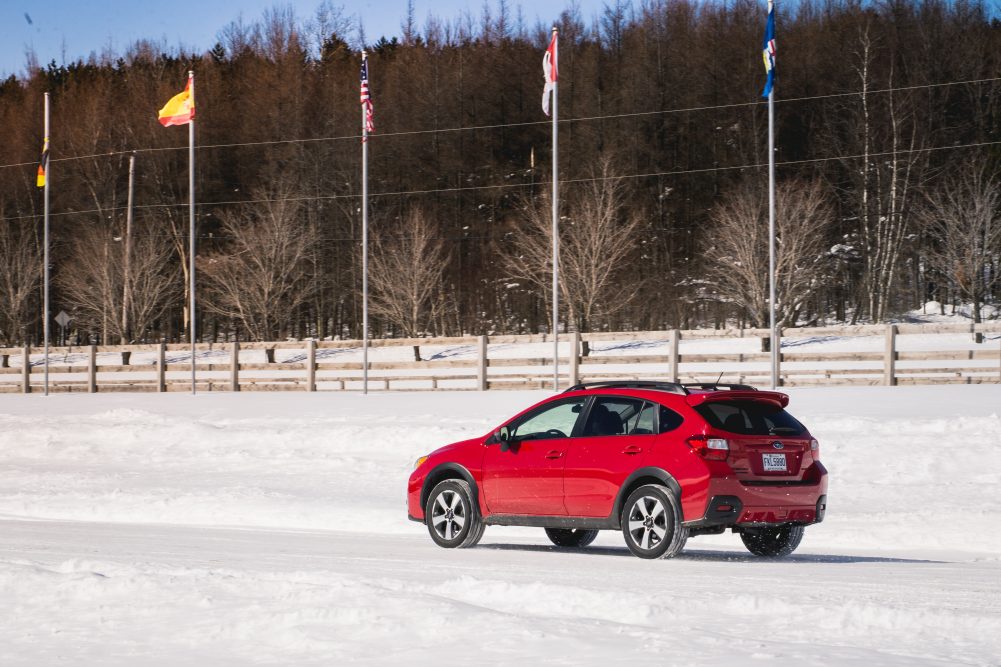 But Subaru’s compact crossover doesn’t hide what it is. The Crosstrek, introduced in 2013, is precisely that: a fortified Impreza hatchback, very much like the Outback is a fortified Legacy wagon. And that’s sorta cool, don’t you find? Yes, it rides on the same platform and drivetrain as Subaru’s popular compact sedan, but the Crosstrek you see here is actually based on the last generation Impreza. A new, updated for 2018 Crosstrek should arrive later this year, riding on Subaru’s Global Platform. For 2017, Subaru has nevertheless given their compact crossover a few updates to keep it up to pace with the latest invasion of tiny crossovers in the likes of the Honda HR-V, Jeep Renegade, Mazda CX-3, Nissan Juke, Mitsubishi RVR, Chevrolet Trax, and the upcoming Toyota CH-R. 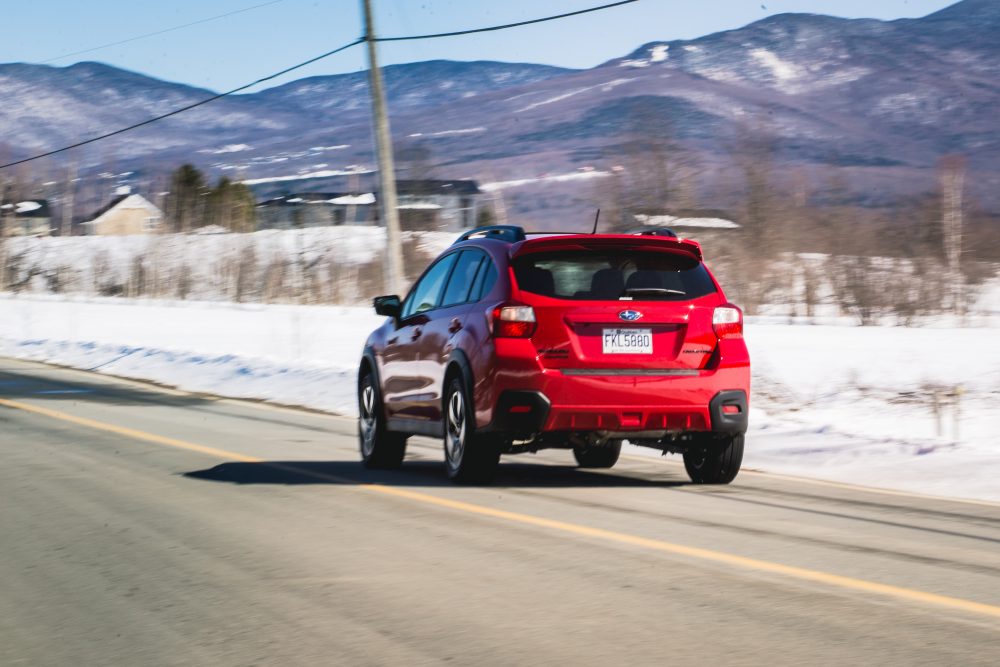 With its rugged appearance and flashy colors, the Crosstrek doesn’t seem to have a problem attracting the young, outdoorsy type millennials it was built for, because Subaru sold 105,400 of these in North America (9,723 in Canada) during 2016.

In Japanese, “Kazan” stands for volcano, this is why this special edition package only comes in, what Subaru calls, Pure Red. Although the Kazan edition is mostly cosmetic, the additions are not negligible, and exterior cues include a longer rear spoiler, a unique set of wheels, a sunroof, a black mesh front grille, blacked-out exterior badging, and a black rear step pad. Inside, Kazan Crosstreks get aluminum pedals, red accents, and stitching. I really dig this trim package.

A Different Sauce to a Familiar Recipe 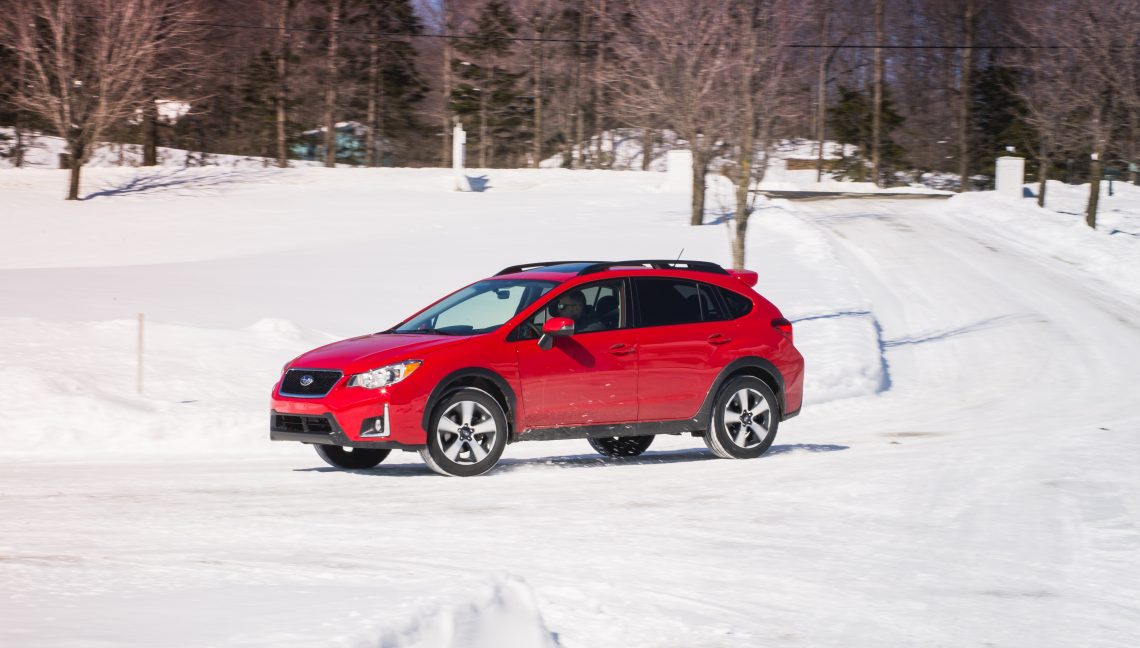 The Crosstrek may look all new and different, but underneath the funky styling lies the same tried-and-tested, classic Subaru recipe they’ve been serving consumers for decades. Power comes from, you guessed it, a Boxer engine. In this case it’s the same 2.0-liter flat-four as in the Impreza, but with slightly lower horsepower and torque figures, which also happens to be the Crosstrek’s biggest letdown. Subaru claims 148 horsepower and 145 lb-ft of torque. And coming from an all-wheel-drive vehicle weighing in at 1 470 kg, if you do the math, that doesn’t exactly add up to something quick.

The Crosstrek is very slow. We’re at the complete opposite of the WRX STI spectrum here. 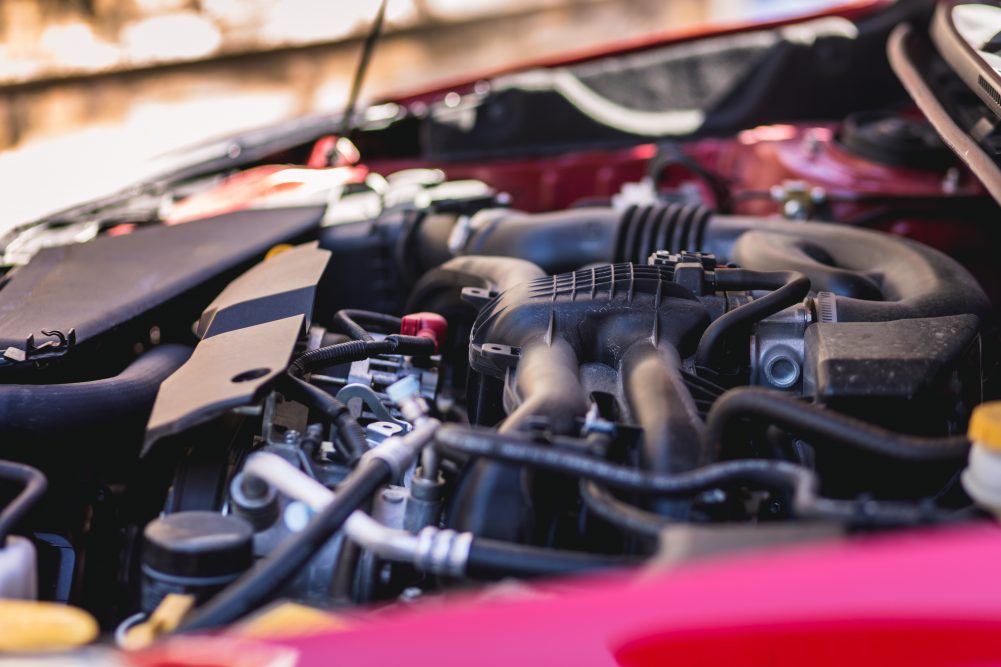 Thankfully, you can order yours with a manual, and even if it’s not the most engaging shifter out there, feeling somewhat like rowing through a bucket of molasses, I still strongly recommend opting for it, since it will allow you to extract the most ponies this vehicle already doesn’t have. With the CVT option, Crosstreks take a Prius-like 10.3 seconds to get to 100 km/h. When equipped with the stick, you’ll get there in 8.1 seconds, a net improvement, but still very tortoise-like performance. Furthermore, the manual will allow you to downshift a gear a two while overtaking; something the Crosstrek has a hell of a hard time doing on the open road – which is presumably where you’ll be heading for your next adventure.

What the Crosstrek lacks in performance, it makes up in all-weather capability, practicality, and character. Thanks to 8.7 cm of added ground clearance, the Crosstrek has no problem getting out of tricky situations – especially a heavy snow storm. 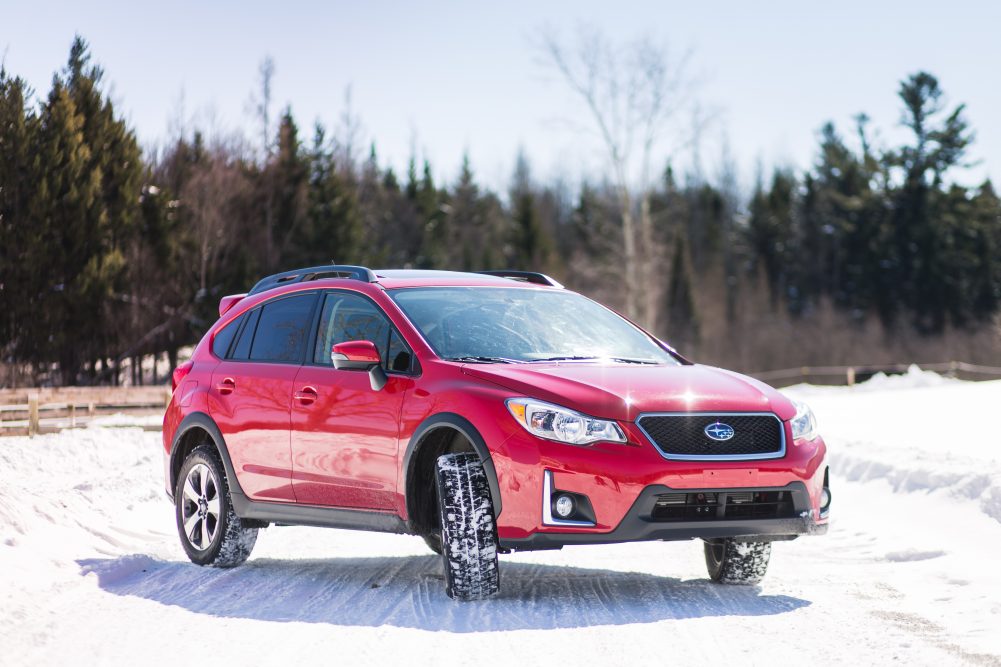 My experience with the Crosstrek was in hectic, if not alarming driving conditions, possibly the worst winter blizzard the province of Québec has seen in over a decade. Thinking this was the best opportunity to try out my little Subaru, it turned out to be a very bad idea to go out and drive due to extremely poor visibility caused by violent winds and snow flurries. But, apart from a few scares behind the wheel, my Crosstrek plowed through that storm hands down. Subaru’s symmetrical all-wheel-drive remains the best system for crawling out of deep snow, as the low centre of gravity generated by the Boxer engine and near perfect weight distribution of its drivetrain means the vehicle is always securely planted to the ground, as if there was a giant magnet under the car. The Crosstrek’s raised suspension definitely helped too. 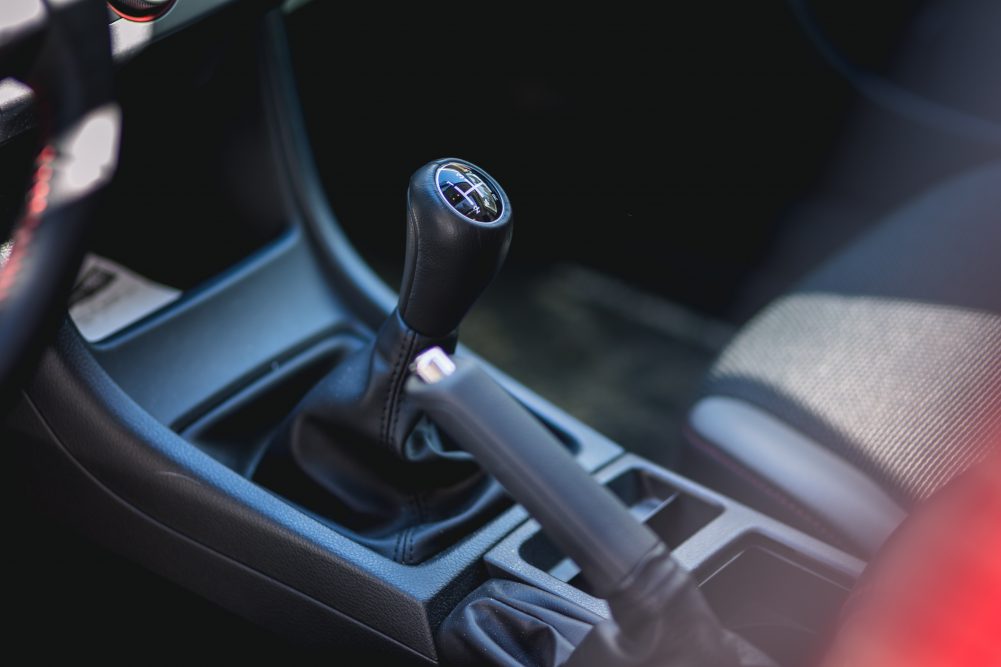 Being a manual-transmission Crosstrek also meant I could ring out the little 2.0-liter to maximize traction in the white stuff. Luckily, traction control can be removed, but unlike the Legacy I drove a few months back, where stability control could be fully disengaged, it remains present in the Crosstrek, and kicks in the moment you want to have a little of fun with it. Granted, for inexperienced drivers, this feature will probably save them from an inevitable crash. But for drivers that understand a thing or two about understeer, oversteer, and overcorrection, or the, ahem, proper way to drive a car during harsh weather conditions, that stability control system is downright infuriating and prevents you from being in absolute control of the car.

All carmakers should always offer an off switch for these systems. 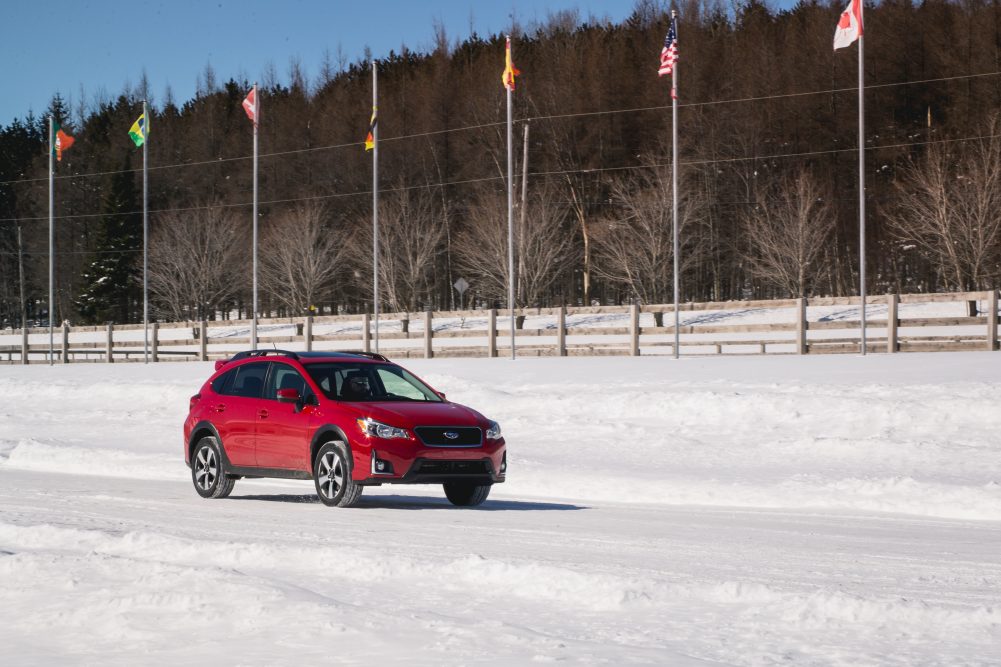 Out of the storm and onto the dry, warm tarmac, the Crosstrek showed equally impressive road manners. The chassis, even though sourced from the last generation Impreza, is stiff, compliant, and a blast to throw around in the bends. Steering is quick, with sharp turn-in, and overall, handling is impressive for a crossover. Understandably, the raised ride height does evoke some body roll, but thanks to a drivetrain that’s kept as low as possible to the ground, body motions remain minimal, something I had also noticed in the Forester.

In many ways this feels like a little puppy dog companion, always ready to play, one that will never let you down, and will happily take on nature’s elements to get you home safe. 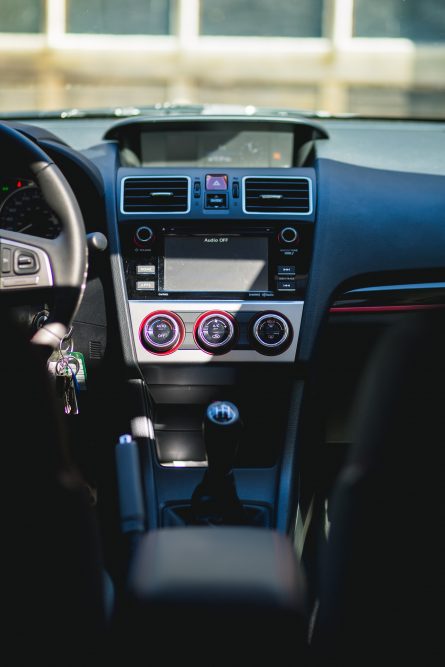 Step inside the 2017 Subaru Crosstrek and you’ll find, like in all Subarus, a well put together and purposeful cabin. Material quality remains a disappointment, however, where hard plastics and cheap-feeling materials dominate the interior. To Subaru’s credit, controls are well laid out, straightforward, and easy to operate, a standout Subaru trademark. Subaru’s Starlink infotainment system remains one of the most enjoyable to use and easy to understand in the industry, but the absence of the latest connectivity features such as Android Auto/Apple Carplay makes it lag behind some of its competitors. 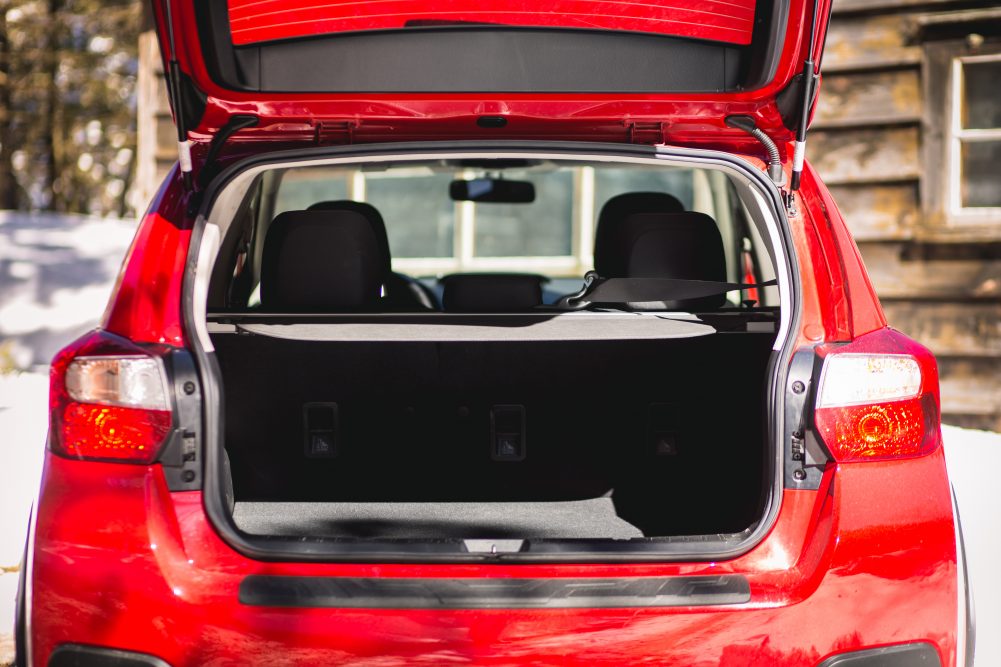 Overall, seats are comfortable in the Crosstrek, but lean towards the hard side. All around visibility is excellent, rear head and leg room is ample for full-size adults, and that trunk will engulf 1 469 litres of cargo space. That’s on par with other compact hatchbacks such as the Volkswagen Golf, Honda Civic, and Chevrolet Cruze hatch, except none of them can be had with all-wheel-drive in this price range. 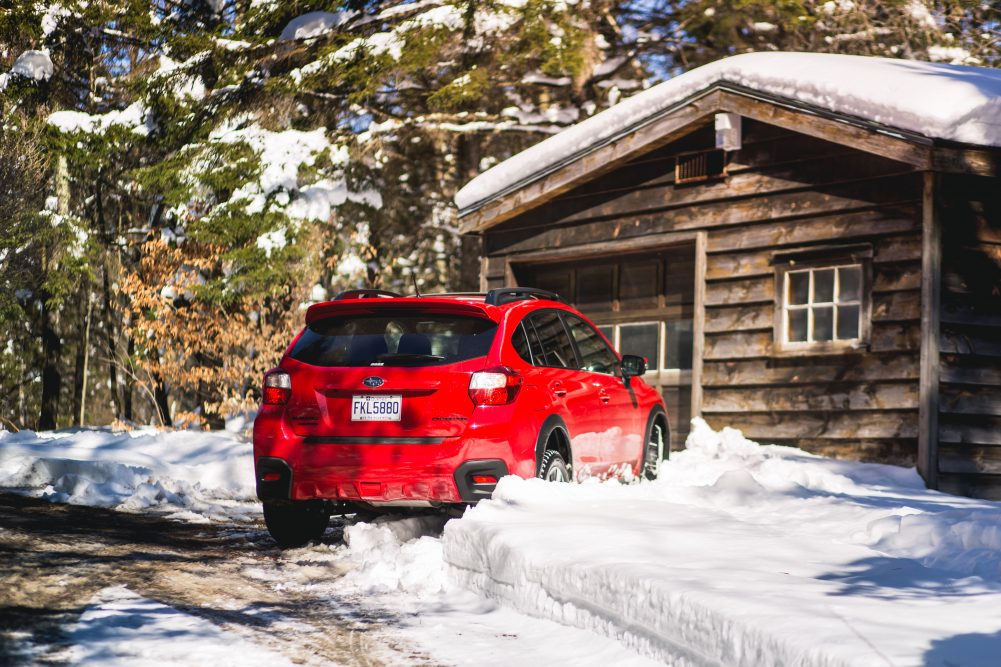 Another ace up the Crosstrek’s sleeve is the amount of car it will get you for your dollar. Pricing for a base Crosstrek, with a manual, which comes standard with all-wheel-drive, starts off at $26 785. Surprisingly enough, my tester, the Kazan edition, isn’t the most expensive one in the lineup, but actually the second trim level just over base. It sells for $28 285 for all the added exterior goodies. That’s a great bargain. Of course, it only comes in red.

A fully loaded, Limited Crosstrek, complete with Subaru’s Eyesight bundle of semi-autonomous tech, tops the range at $34 085. But Subaru will sell you a Sport, just over the Kazan, which allows you to choose your color, for $29 185. I would recommend not going over the Sport model, as the added bells and whistles do make the Crosstrek somewhat expensive. Keeping it under the $30 000 mark would be a wise decision. 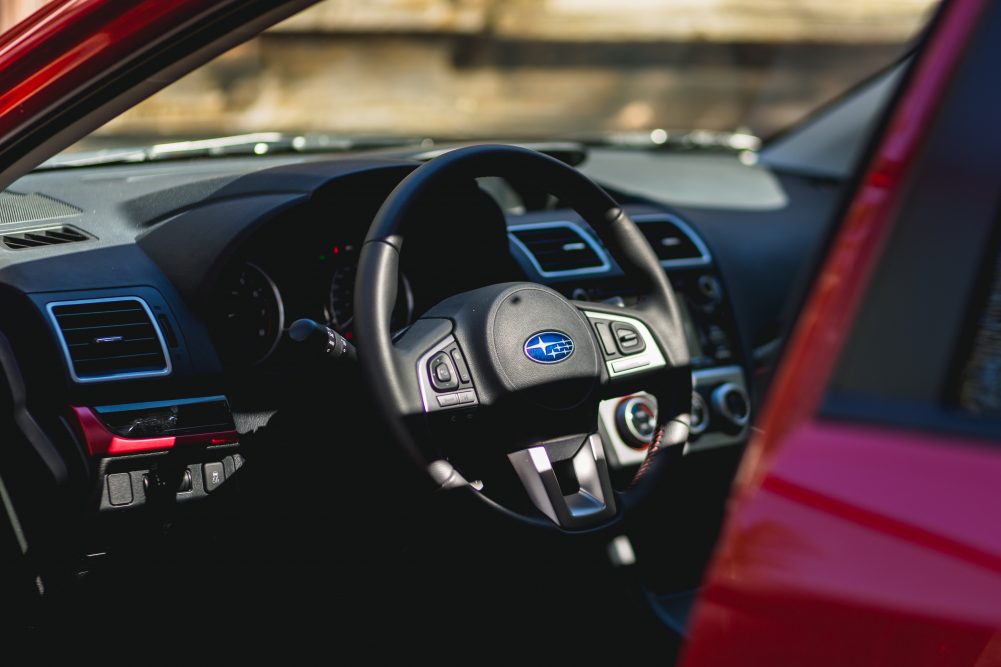 Of course, the Crosstrek does have its shortcomings. At highway speeds there’s significant road and wind noise going through the cabin. Fuel economy is midpack at best; I was unable to keep it under the 10.5L/100 km average mark. As far as all-wheel drive four cylinder go, I got slightly better fuel economy numbers from the Honda CR-V and Toyota RAV4, which managed to stay between the 9.5 and 10L/100 km mark. 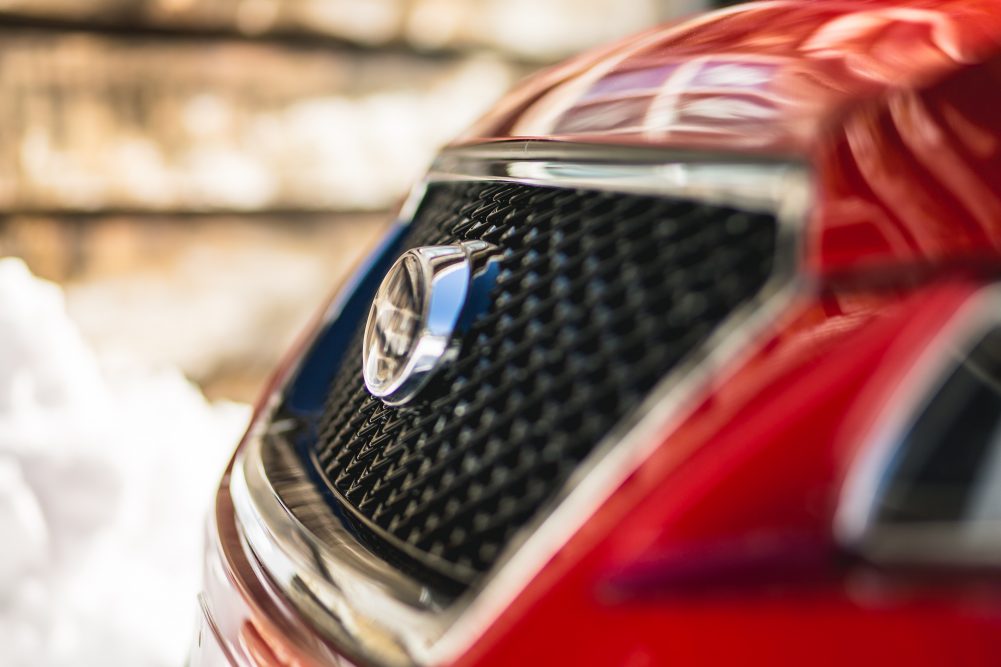 Finally, there’s the Boxer engine’s quirky personality. Although an engineering feat in its own right due to the way it complements the all-wheel drive system for added traction, it remains a rather crude unit, one which rumbles and yelps, sounding somewhat broken during cold starts, and shaking the stick shift to the tune of its decibels.

It does give the Crosstrek a hell of a lot of character though.

At the end of the day, there’s no hiding the fact that Subaru has a winning formula with the Crosstrek, and the sales figures prove it. I have to say, I really liked this thing a lot. It’s perfectly suited for our climate, it’s affordable, practical, fun enough to drive, and filled with personality. Just add a little turbo in there Subaru, and we can call it a day.

Review of the 2017 Subaru Crosstrek Kazan Edition by William Clavey