2022 Subaru BRZ Was Improved In The Areas That Matter 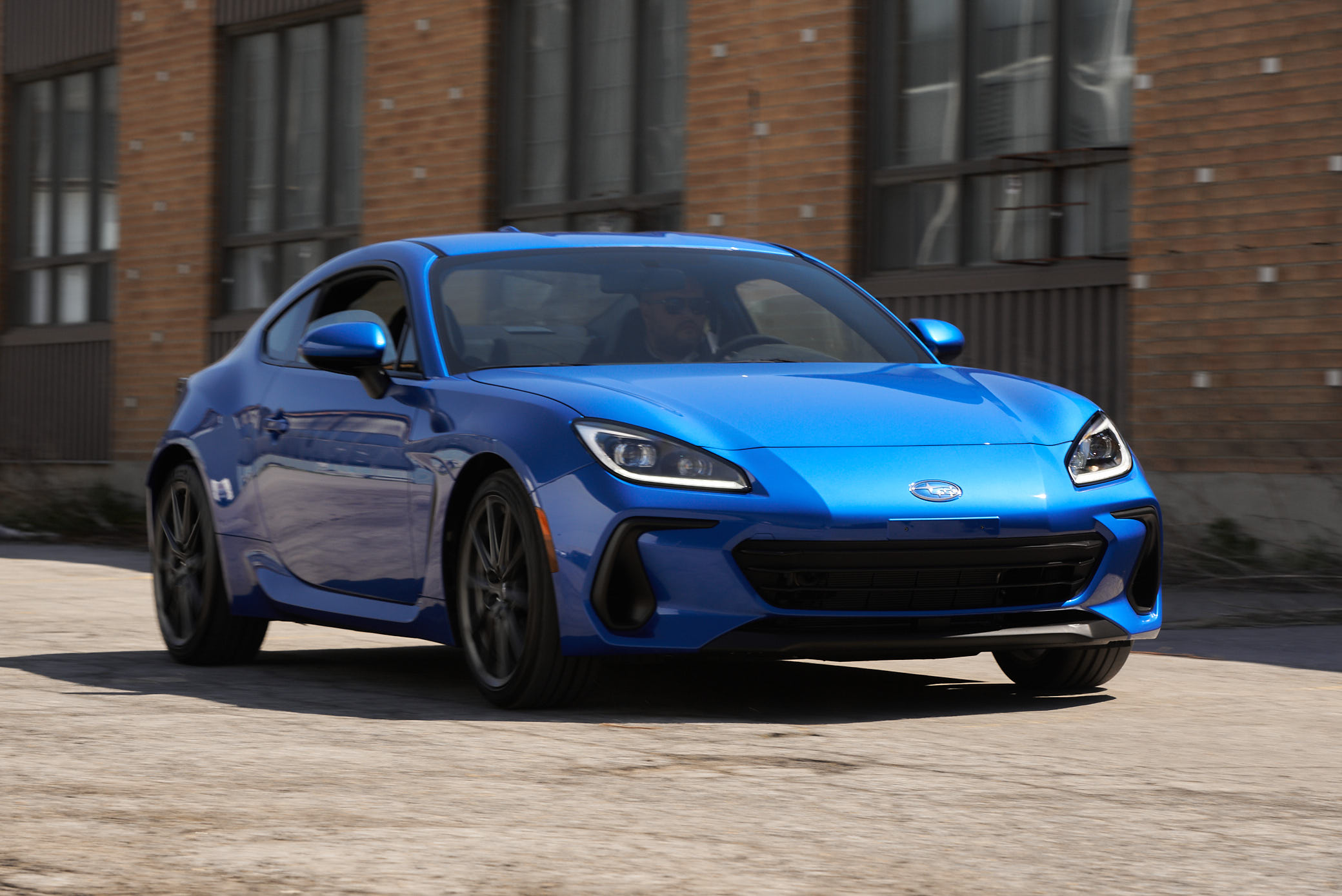 The 2022 Subaru BRZ is finally all new after being the same for about a decade. And that feels amazing. However, contrary to its twin Toyota sister who’s had many existential crises along the way, changing names more often than Chrysler, the BRZ has been pretty constant the entire time. So, is it as pure as the last car? It is! Not only is it just as fun and engaging to drive as before, it eclipses its predecessor in the areas that actually matter for us enthusiasts. 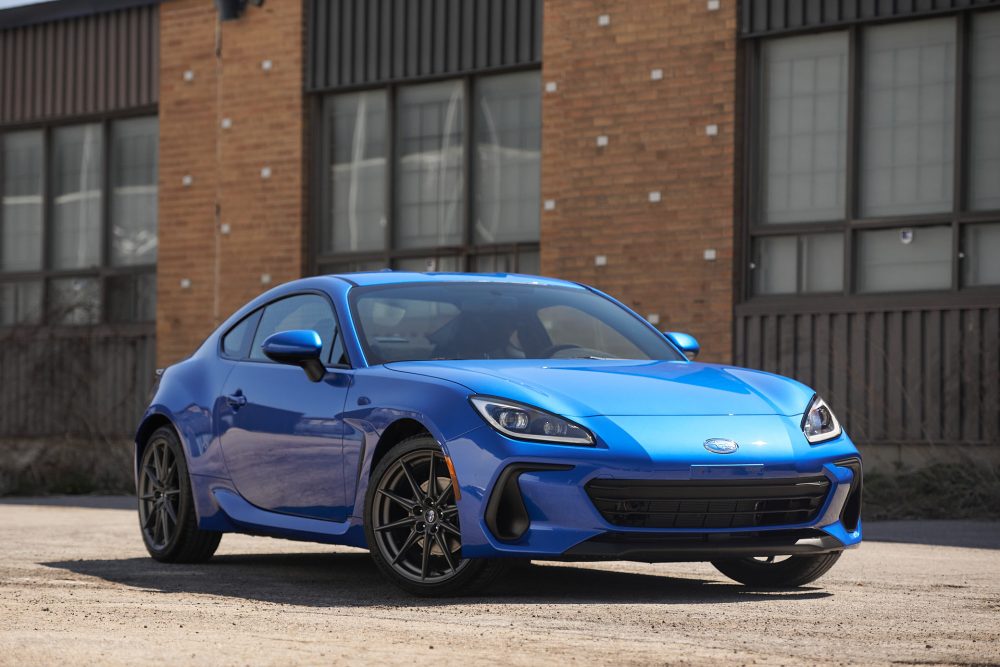 It’s rare that sequels end up being better than the original, but some actually make it happen. Terminator 2 was way better than the first. Some would say Back to the Future 2 is the best of the trilogy, but I’m still trying to make my mind on that one. I did see the new Top Gun Maverick movie and, yes, it’s better than the first one. Imagine that. 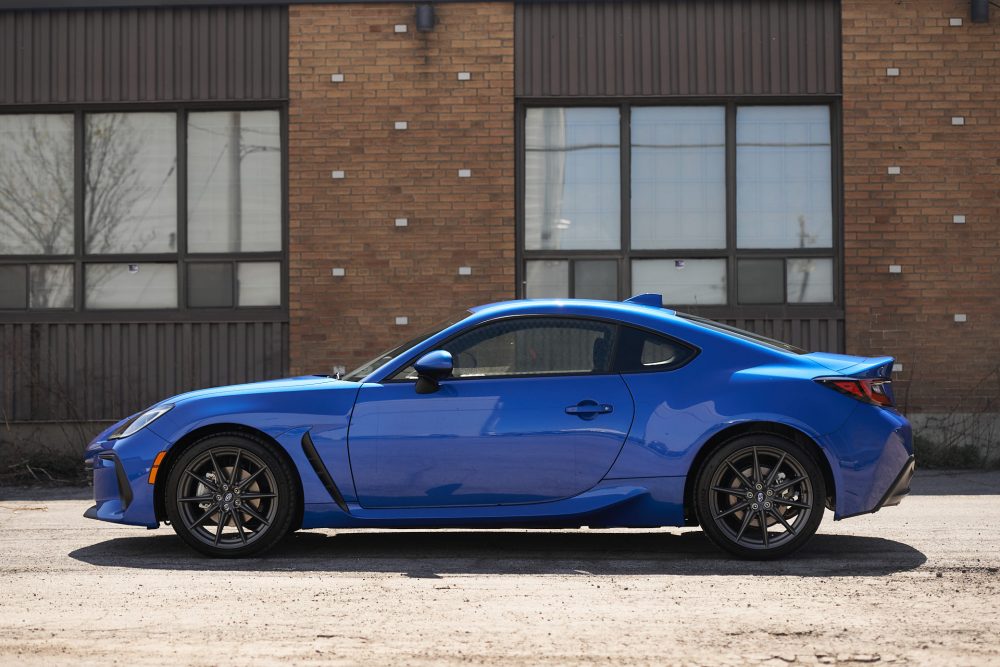 The 2022 Subaru BRZ is like a very good sequel. It’s so well executed that it almost renders the first one obsolete. One area where Suburu and Toyota definitely got it right, is in the styling. This new car is all grown-up, with a much more coherent design language. It no longer looks like your teenager’s tuner project. It has proper sports car proportions now. I’m a personal fan of its bulging rear fenders. You may not notice it on these photos, but this new BRZ has a seriously wide ass, even if the car is the same width as before. As a matter of fact it’s pretty much the same size albeit being 1 inch longer and 0.5 inch lower. 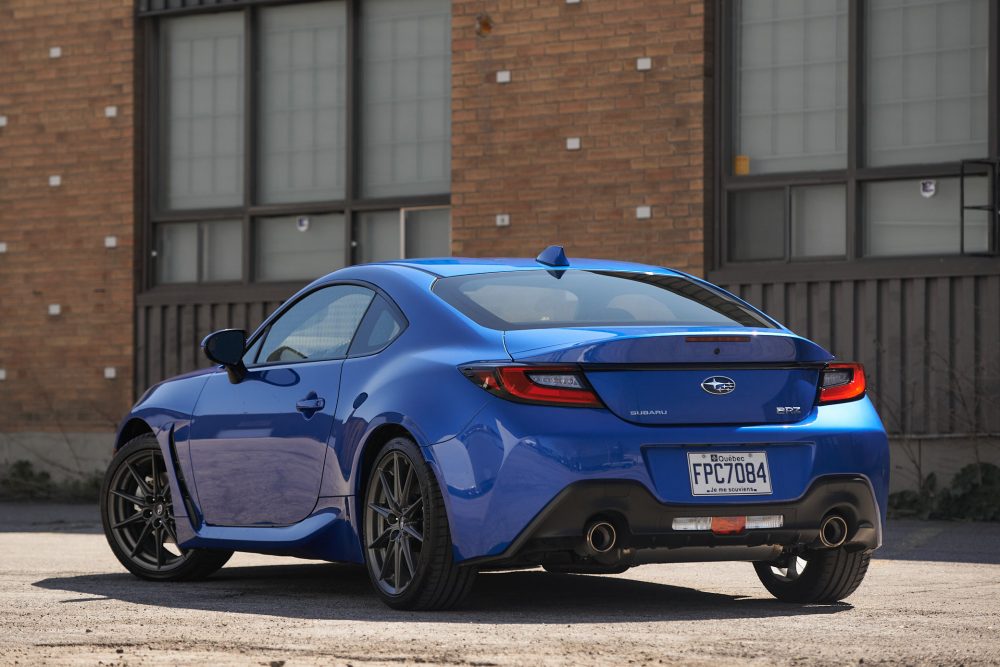 Fun story: while driving this thing two people came up to me asking me what it was. When I answered Subaru BRZ, they both told me they thought it was a Porsche. That’s how much Subaru and Toyota have nailed the design. 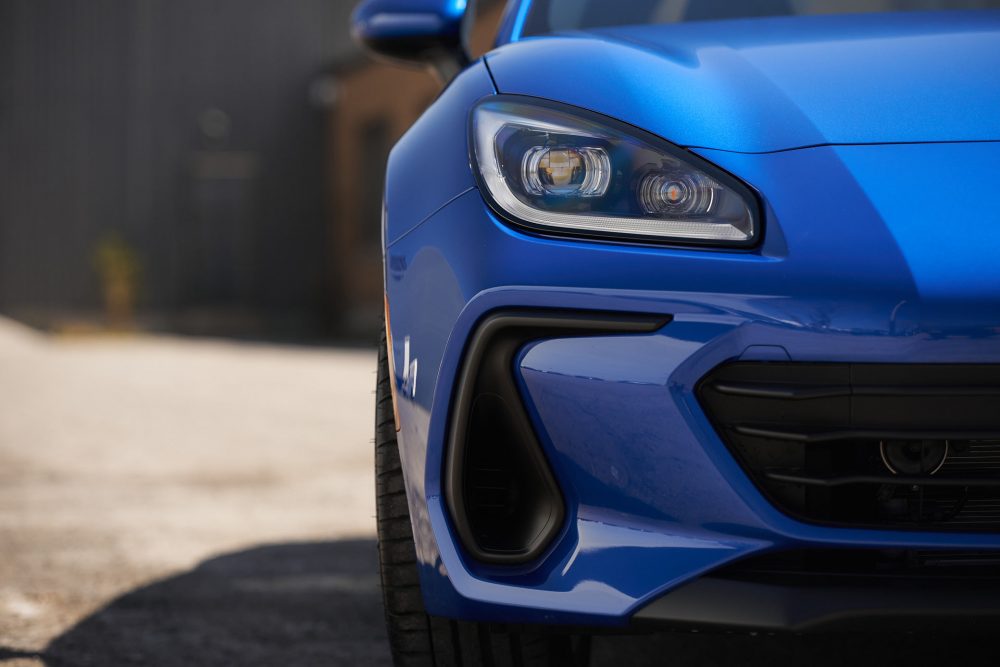 Weight was also a serious focus point. Updating cars these days without making them fatter is hard due to all the crash testing regulations and the amount of bullshit tech people now (don’t) want in cars. There’s also a new, larger engine under the hood of this one – which I’ll get back to in a bit -, so obviously weight was an issue. Turns out it is heavier, but not by a lot. Subaru and Toyota went the extra mile to fit the car with an aluminum hood, roof and trunk. The end result is a car that’s only 53 pounds over its predecessor. Worry not, because Subaru says the power to weight ratio is better than the old car’s. 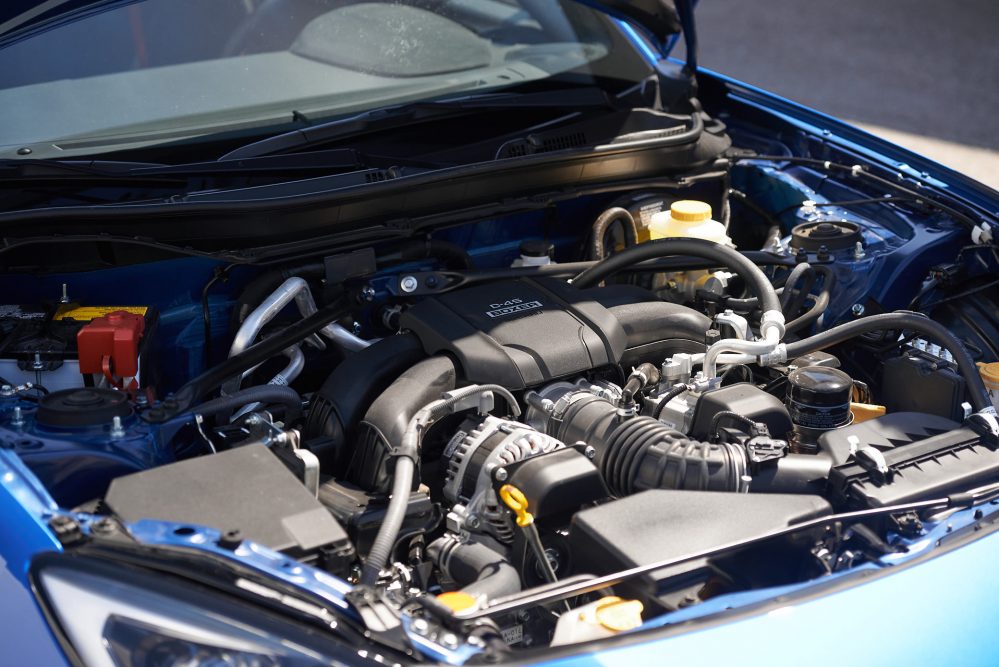 Now that engine. Gone is the dinky, but very charismatic Boxer 2.0-liter flat-four of the past. It’s been replaced by an all-new 2.4-liter unit. Like before, it’s the love child of Subaru and Toyota engineers in the sense that it’s a Subaru H4 that’s been fitted with Toyota’s D-4S direct injection system.

The added displacement allows power to climb considerably, from a lukewarm 205 horsepower to a much more interesting 228. Torque also sees a healthy upgrade, from 154 to 184 lb-ft. And yes, the 2022 Subaru BRZ is still rear-wheel drive only and it can be equipped with a six-speed manual transmission. A six-speed automatic is also available if that’s your thing. But why? 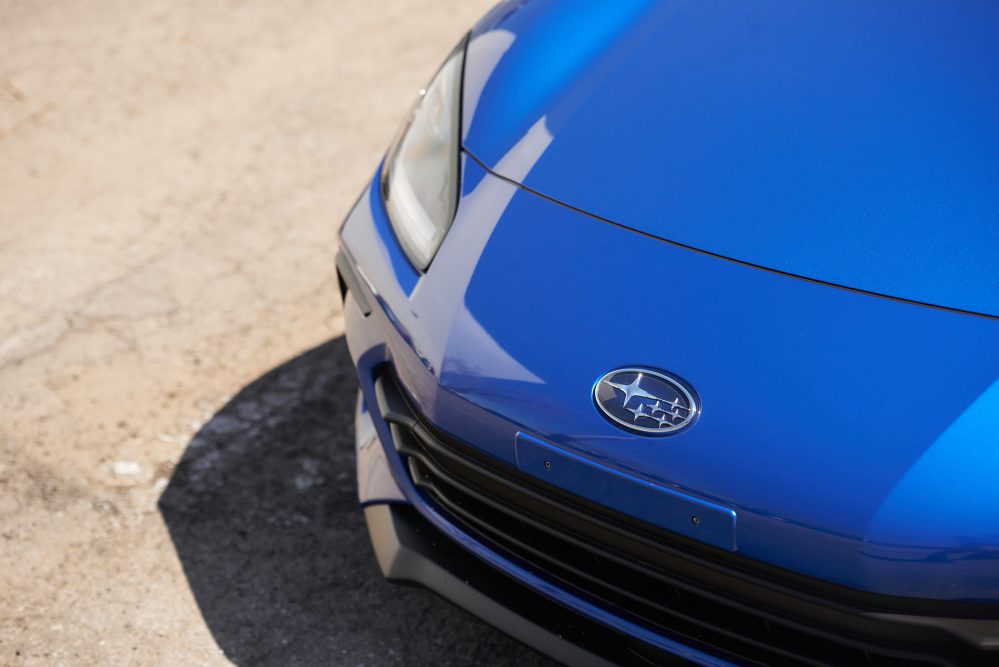 Perhaps even more fascinating is how Subaru and Toyota actually managed to keep the price low, making this one of the best performance bargains of the year. You’ll never go over the $40,000 mark with this thing, which really makes it the poor man’s Porsche 718 Cayman. The BRZ kicks off at $31,533. My car was a full-fat Sport-tech that only costs $34,533. You could get the $36,933 Sport-tech with the automatic transmission and the EyeSight driving assistance technology, but why the fuck would you do that? 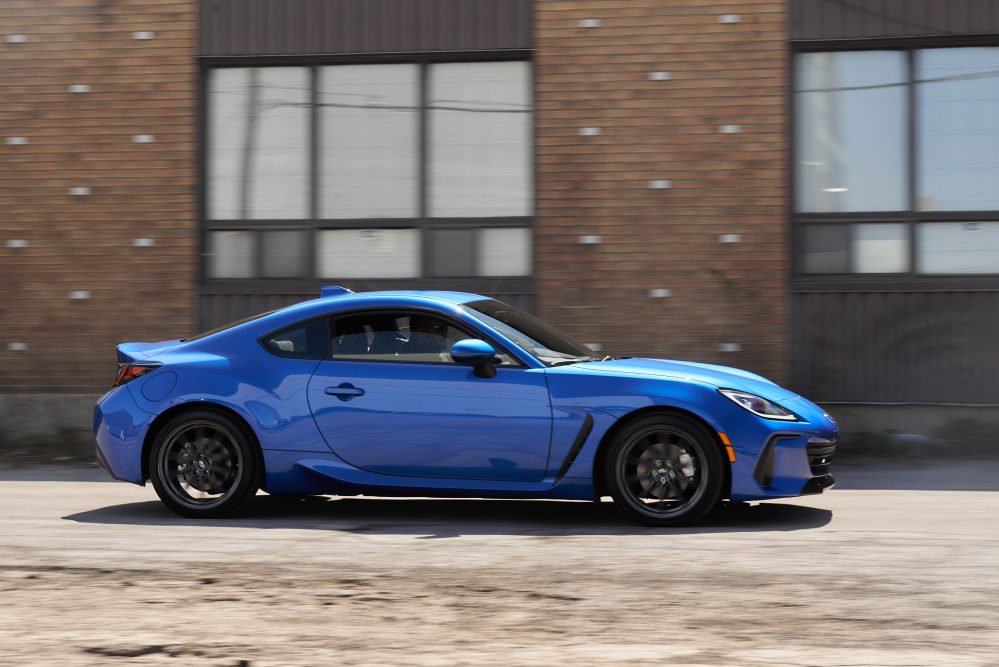 Very much like the Mazda MX-5 or my very own MINI Cooper R50, the Subaru BRZ is one of those cars that makes you feel like a hero each time you drive it. As the old saying goes, it’s way more fun driving a slow car fast than a fast car slow and it couldn’t be more true behind the wheel of this Toyobaru. 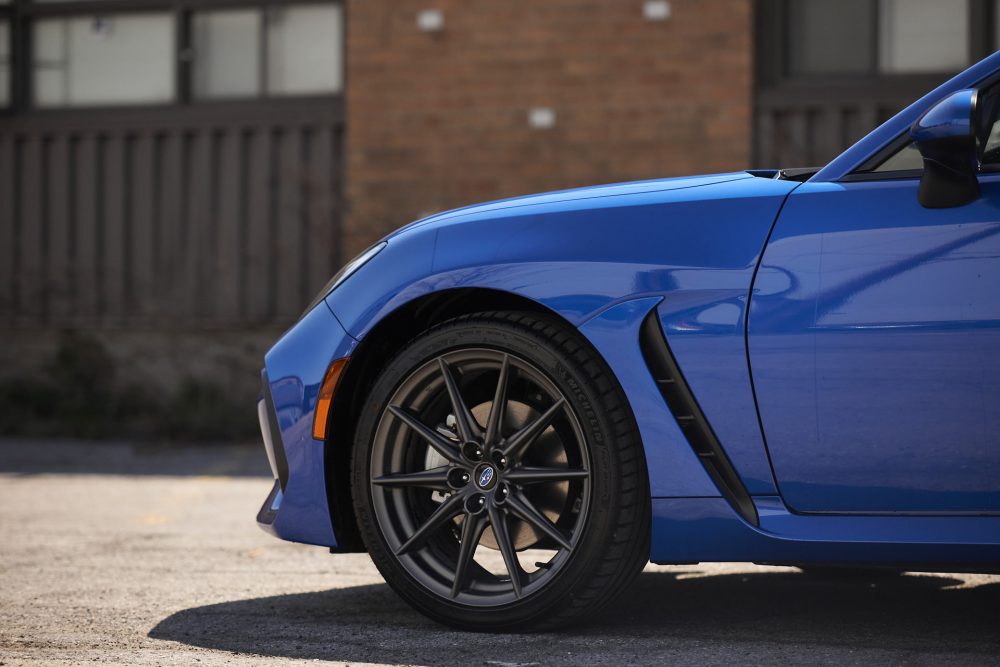 But it’s not to say the new BRZ is slow, because it isn’t. If anything, the upgrades really give it the performance it needs to be taken more seriously by a the Honda Civic Si driver in the other lane. The BRZ is actually much quicker off the line than the Civic from 0-96 km/h now, 5.4 seconds versus 6.8. YouTube videos also show a considerably quicker BRZ than before on the quarter mile run. 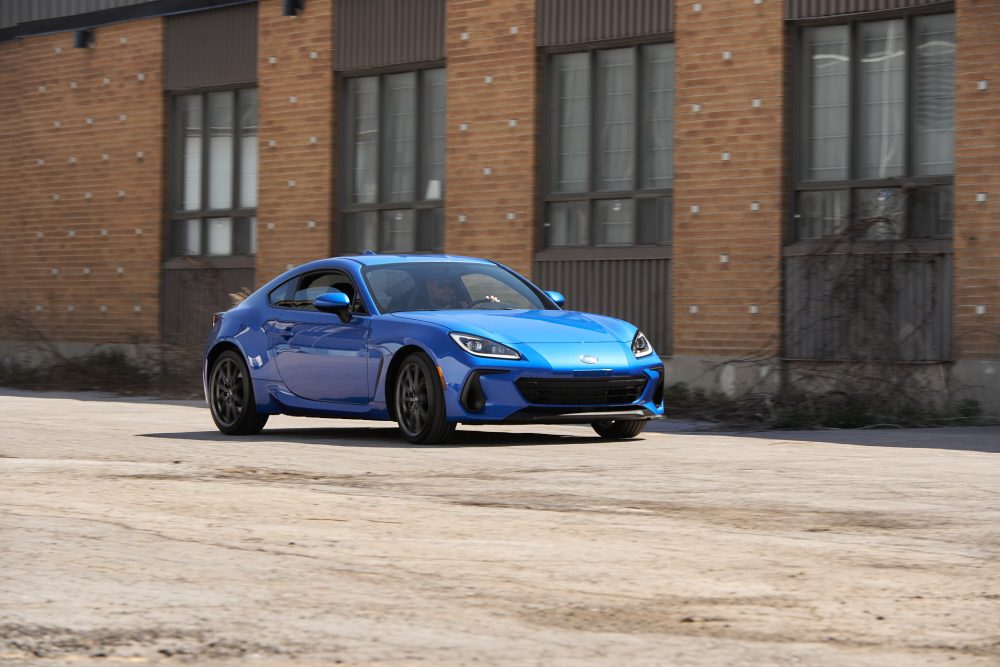 A larger engine is obviously the reason, but that big block four-cylinder doesn’t tell the whole story. It’s really the way this BRZ puts the power down that makes it more addictive than hard drugs out there on an open bit of tarmac. 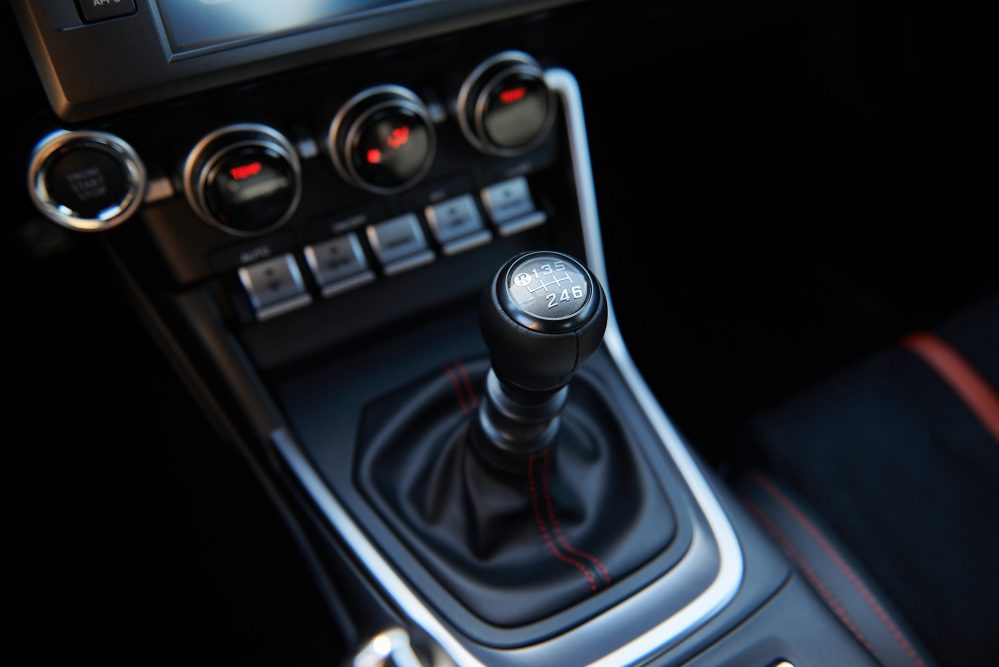 The new engine also has a much more interesting power band. Gone is the weird torque dip of the old car once you passed 3,000 rpm. It’s all linear now, with no loss of power all the way to when it peaks at 7,000 rpm. And while you still need to thrash this engine to extract everything it has in stock, torque kicks in hard at 3,700 rpm and never lets go. 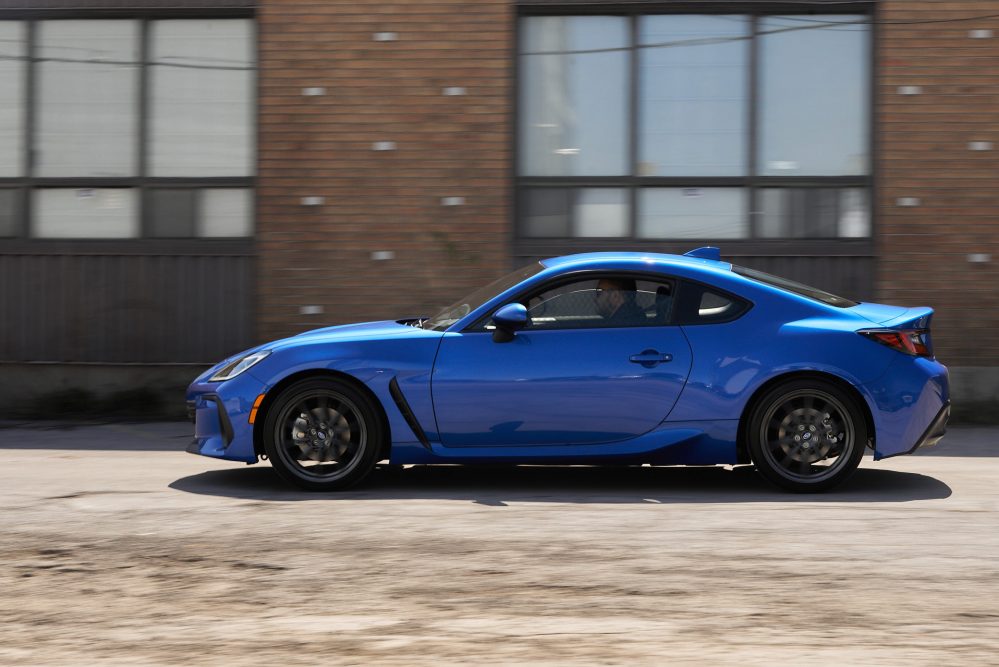 But of course, the BRZ is best appreciated in the corners where you’ll be downshifting using the impeccably precise manual gear lever, heal-toeing using the well-spaced pedals and cornering hard thanks to the razor-sharp chassis. Steering feel is all there even if it’s electronically assisted. You sense everything the front tires are doing, all the time. 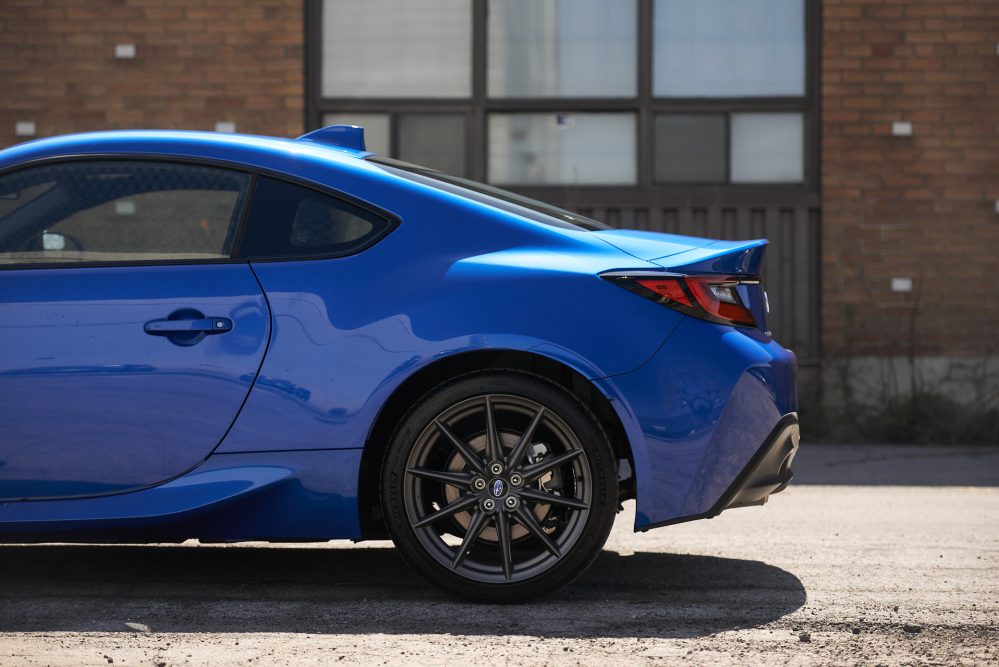 And thanks to those cute little hood bulges over the fenders, you also always know where to place its nose. Give it too much throttle on corner exit with traction control turned off and yes, chances are you’ll feel the rear end wiggling. It does take a lot to get those rear tires to skid, but when they do, it doesn’t take much effort to control a glorious powerslide. In order words, the BRZ is easy to take in and digest, which just adds to the fun. 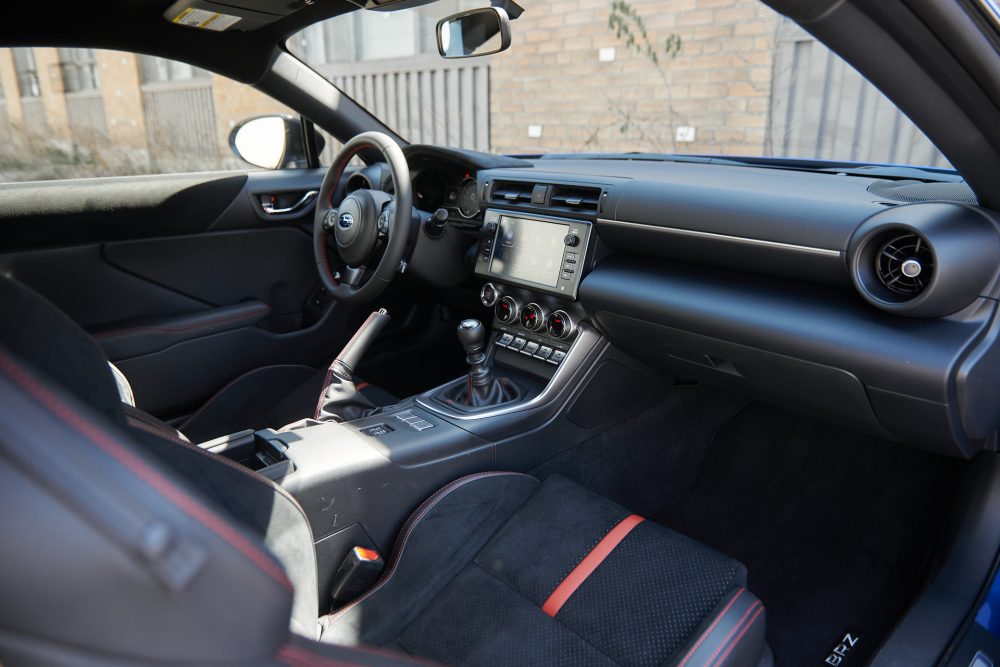 Inside, Subaru tried to change things, and it’s considerably nicer than before. But it’s still very much a driver-focused cabin. In other words, it’s very cramped in there and there isn’t much sense of styling or anything fancy in the materials used. 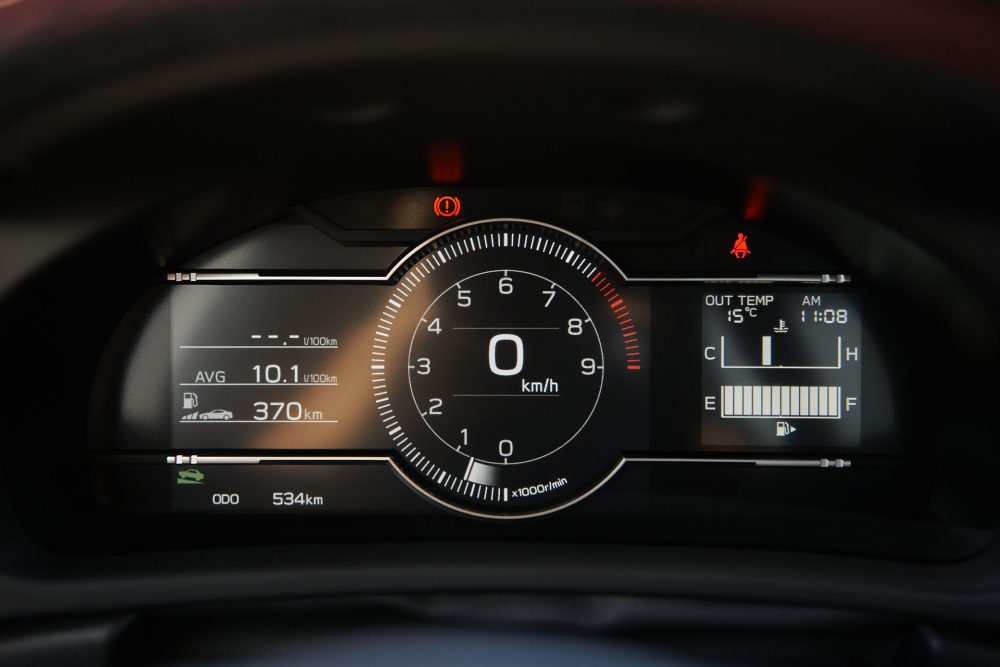 That said, there are some neat little touches like the now fully digital gauge cluster that changes its appearance when you activate Track mode. It’s also shaped like a Boxer engine and that’s cool. I also totally dig the 1990’s font in the gauge pod which looks like a Timex watch from 1996. Not sure if that was done on purpose or by accident, but it’s seriously badass. 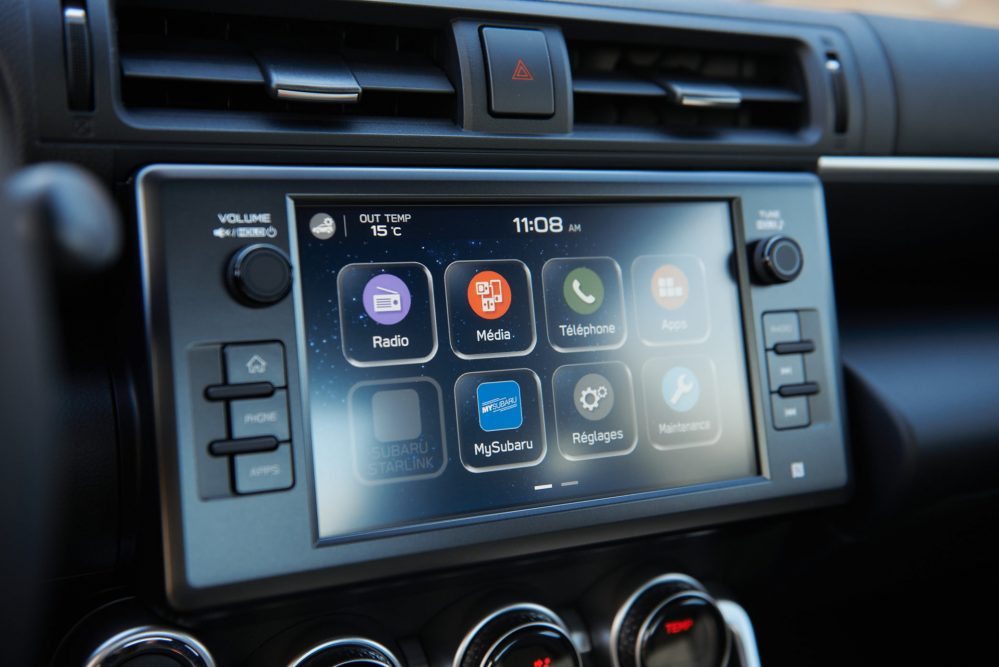 The infotainment system is fine. It doesn’t do anything special except being effectively simple, which is what we all want from a sports car. Subaru tried to move the cup holders back a bit, underneath the center armrest. It’s much better than the old ones that you basically had to assemble yourself. But these new ones are still impressively useless. 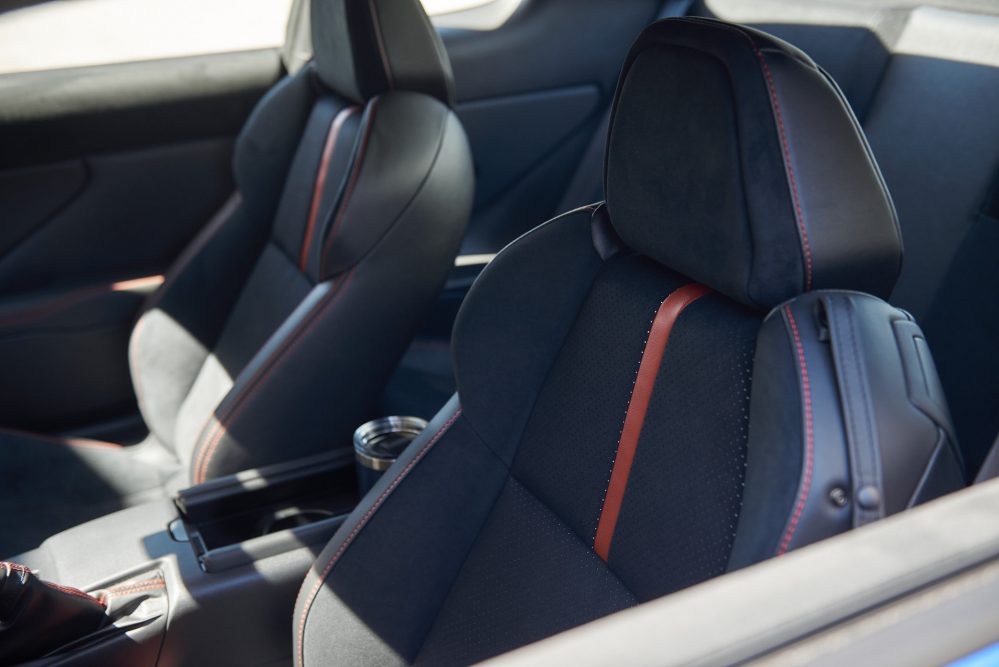 One area where the BRZ does improve a lot on is driving position. The fact that it’s longer allows for more flexibility in how you can adjust your seat and steering wheel. For a big dude like me, that’s appreciated. While snug, the BRZ is never uncomfortable per se. I do need to lose a few pounds to fit better in those sports bucket seats though. 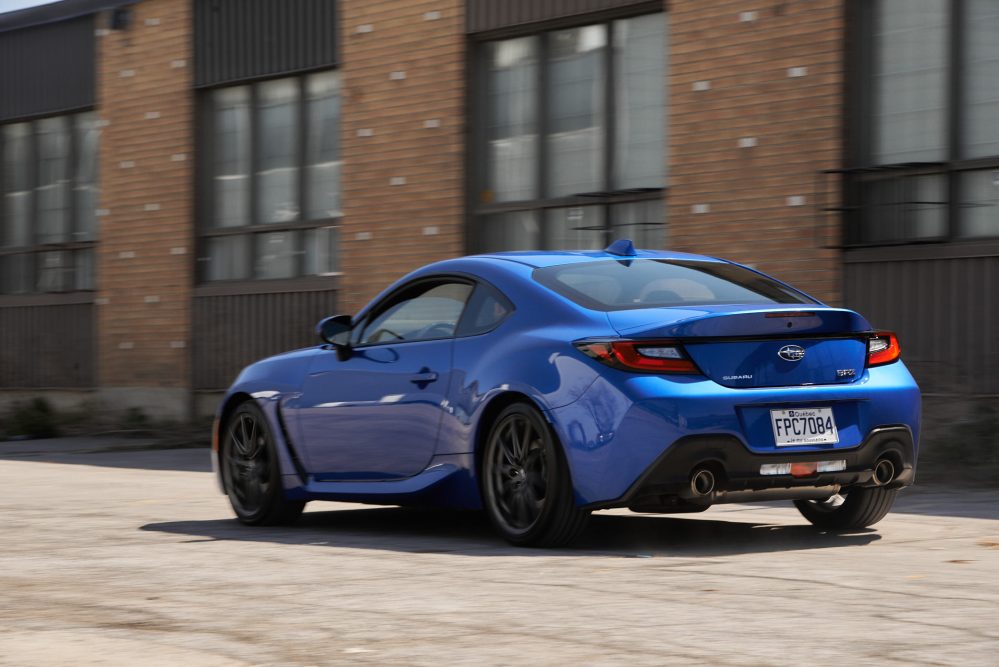 The 2022 Subaru BRZ is definitely one of my favorite sports cars this year. Subaru and Toyota tag-teamed once more to deliver a seriously cool little sports machine, one that won’t destroy your wallet along the process. This new car is now quicker off the line, more refined, way more attractive and it’s still a blast to drive. It’s definitely a sport compact car I recommend you buy. And if like me, you’d like to make a living driving cars or working in anything that’s car related, go check out Jooble where you’ll find a ton of job openings in that field.