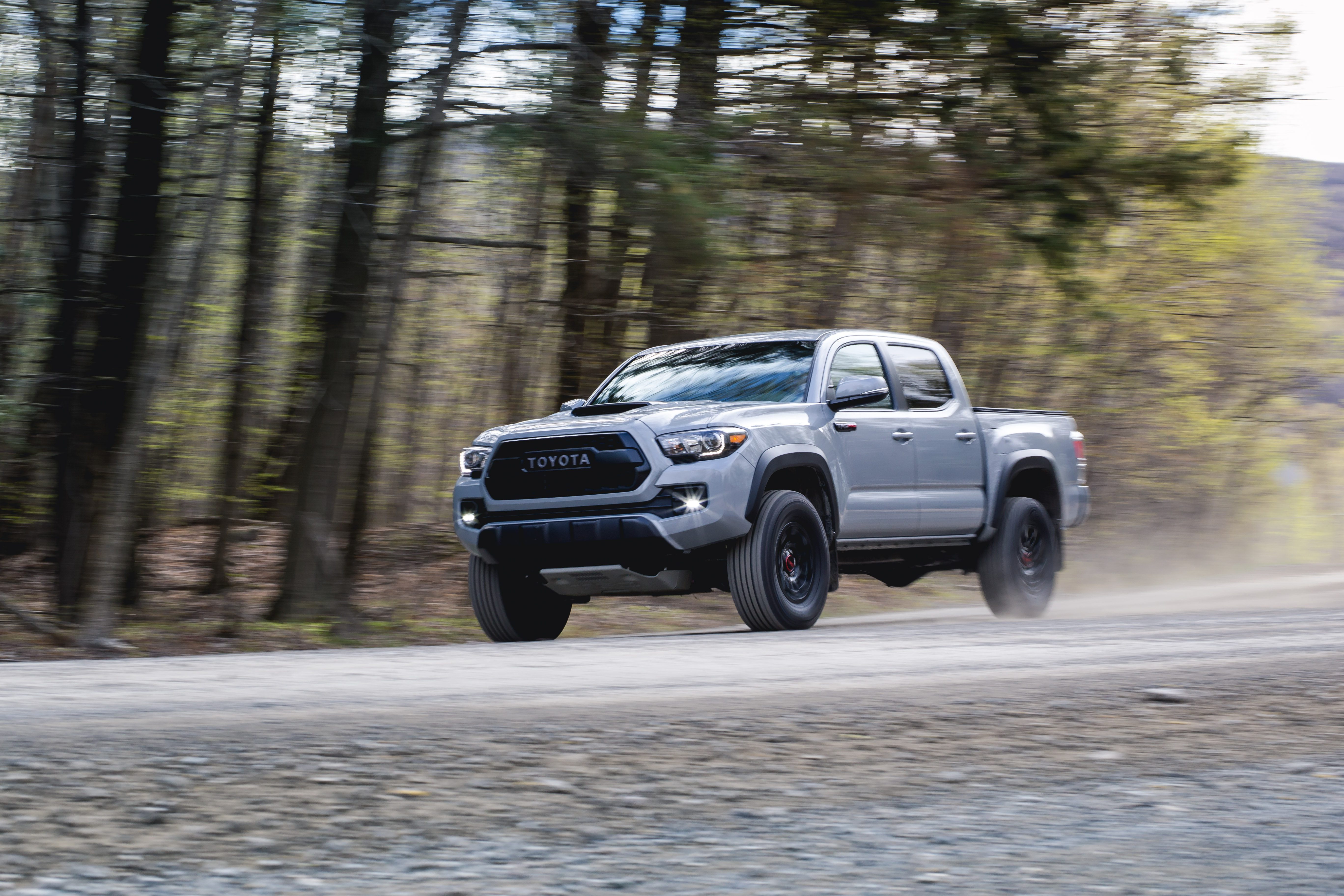 Is it me, or normal pick-up trucks don’t matter anymore? Ever since Ford released the insane baja-off-road-racer-for-the-road Raptor a few years back, nobody wants to settle for the single-cab, ho-hum custom base pickup no more. These days, the truck world is all about big tires, pissed-off front fascias, fortified suspensions, and skid plates.

You guys probably remember the Tundra TRD Pro I reviewed last summer?  I had a blast with that big guy, as it drove me all the way to Gaspé and back. I also slept on its bed, climbed a mountain, and went out and played with some motocross riders in a sand pit with it. What you see here is its little brother, the Tacoma TRD Pro, probably the most popular pick-up truck this side of 1985. As trucks try desperately to lean more towards a refined, car-like driving experience, like our beloved Honda Ridgeline, this Taco keeps one foot solidly planted in the past by remaining properly rugged, and being the spiritual successor to Marty McFly’s truck. If you’re looking for a bulletproof companion that will bring you anywhere, like, forever, this is the bro truck you need in your life.

A Block Of Cement On Wheels 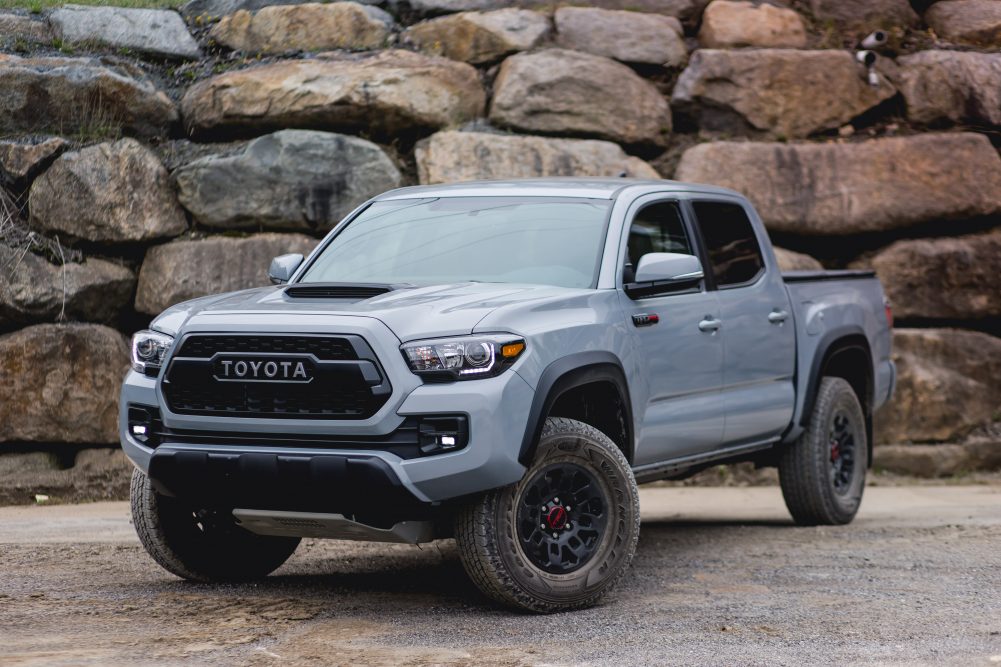 Looks gnarly, doesn’t it? That paint job is called Cement Grey Metallic. It’s one of only three available colors for the TRD Pro package, which can only be grafted onto the double-cab, V6 Tacoma model. As with the Tundra TRD Pro, the off-road add-ons for the baby Toy Toy are a serious bit of kit, and will transform your little Japanese truck from being a humble “camionnette” into a dune-jumping hooligan. The package includes a one-inch front spring lift with Fox internal-bypass shocks at all four corners. There’s a sports exhaust which adds a rather brawny low-pitched bellowing gnarl. A front skid plate can be spotted underneath the front bumper, all while ensuring optimal oil-pan protection. There are TRD-branded wheels wrapped in Kevlar-lined all-terrain tires, a black hood scoop, blacked-out lettering, TRD Pro badging, Rigid Industries LED fog lights and probably the meanest and coolest vintage front grille with blocky TOYOTA lettering incorporated into it.

Did you thump your chest while reading those creds? I know I did. This is the manliest little truck I’ve ever come across. 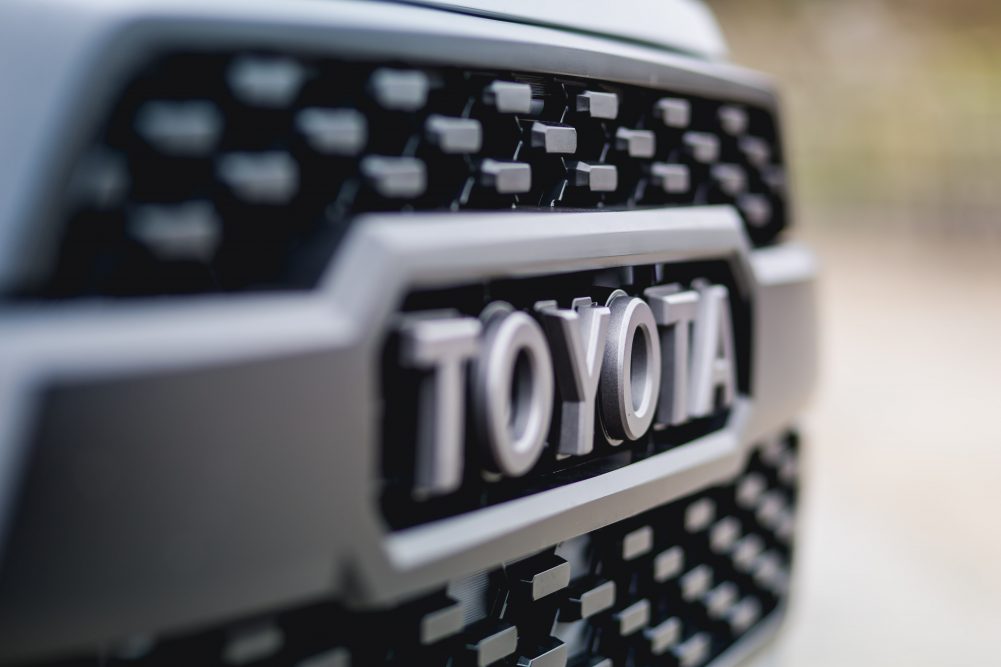 But yeah, this Tacoma looks purposeful. Like it means business. I also love how it sort of reminds me of the Toyota trucks of the late eighties and early nineties, as though the people over at Toyota actually had fun while designing it. I can imagine them cycling through endless pictures of Taco owners on Instagram, modding and off-roading their trucks. 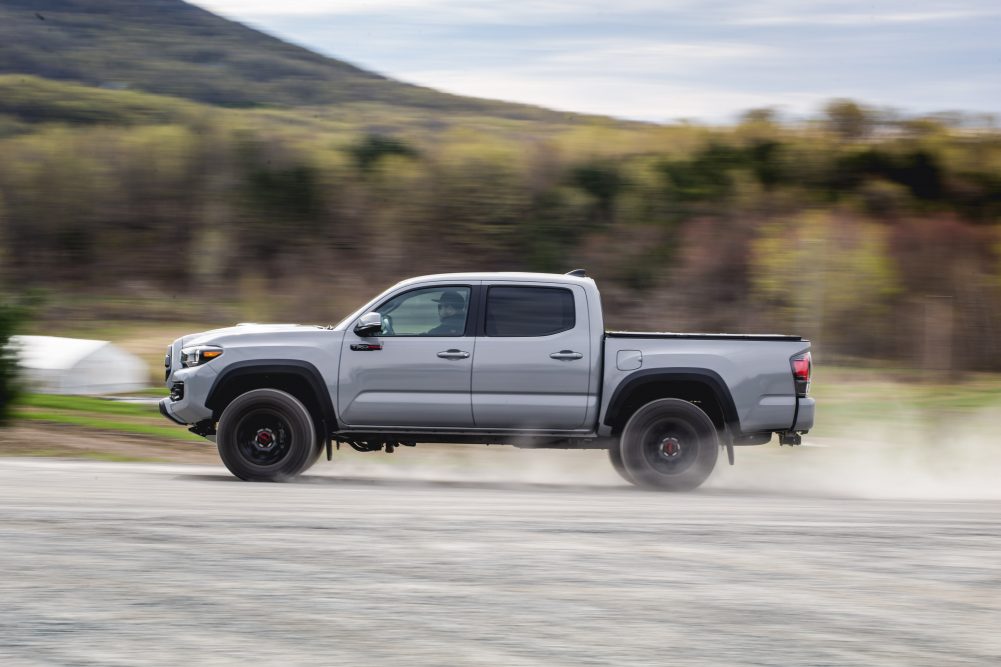 Sure, everyone may be buying Ford F150’s these days, but if there’s a truck out there that has a solid cult following, it’s the Toyota pick-up. And Toyota knows this; it finally understands that it will never beat the Americans in towing capacity and payload ratings, or even sales figures. So it might as well capitalize on its off-road legacy. Smart decision Toyota. 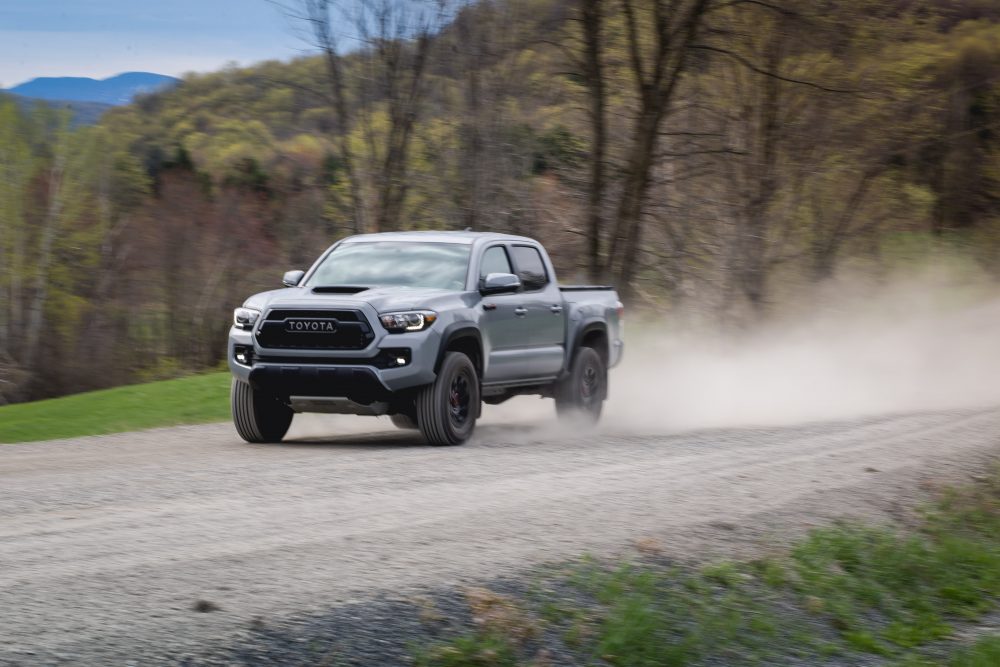 Yeah, so what? No, but, seriously, if you’ve driven any of the recent pick-ups lately, you’ll agree they have more in common with a luxury sedan in terms how they drive and feel on the road. Not this Tacoma. Step inside this masculine toy and you’re introduced to a simplistic and purposeful, yet very well put together interior – as in Toyota fashion. There’s no BS in here, no nonsense. The only indication it’s from this era is the touch-screen infotainment interface. Mine was fitted with a stick-shift. Yes, you can actually get your Tacoma TRD Pro with a stick. How’s that for sticking with tradition? 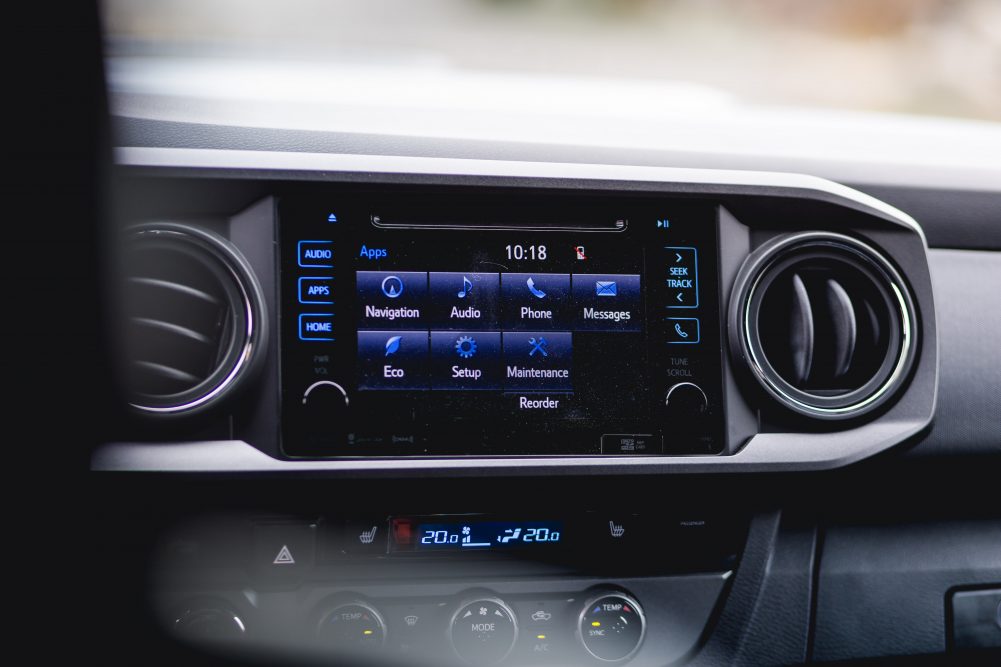 Clutch in, turn the ignition on with an actual key (!), and the 3.5-liter V6 rumbles to life through its sports exhaust. You hear the radiator fan going full swing as you look ahead over the hood-mounted air intake, towering all the cars parked around you. The manual shifter vibrates to the tune of the engine, like the old truck that lives on your grandfather’s land. You grab the long and heavy stick. You shove it into gear with vigor and brawn – because it’s the only way it will actually get into gear. And you’re off. 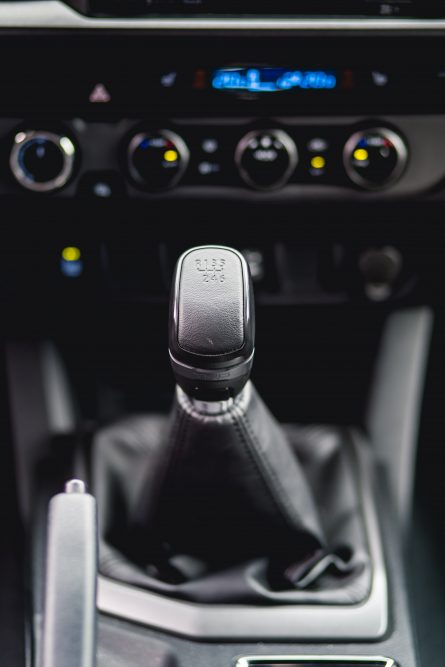 Suddenly, you realize your beard isn’t long enough. Your favorite wardrobe apparel is your hunter’s cap. You feel a need to wear flannel. You’re ready to show the Canadian wilderness who’s boss.

Power in the 2017 Toyota Tacoma is rated at 278 horsepower and 265 lb-ft of torque – with that V6 engine. Those figures remain unchanged even in TRD Pro trim. Power-wise, this puts the Taco in the same ballpark as the Honda Ridgeline, but a good 30 horsepower short of the Chevrolet Colorado. Base model Tacomas come standard with a 2.7-liter four that churns out a claimed 159 horsepower and 180 lb-ft of torque. For the record Toyota, if you’ve got one of those on hand, I would really like to try one. 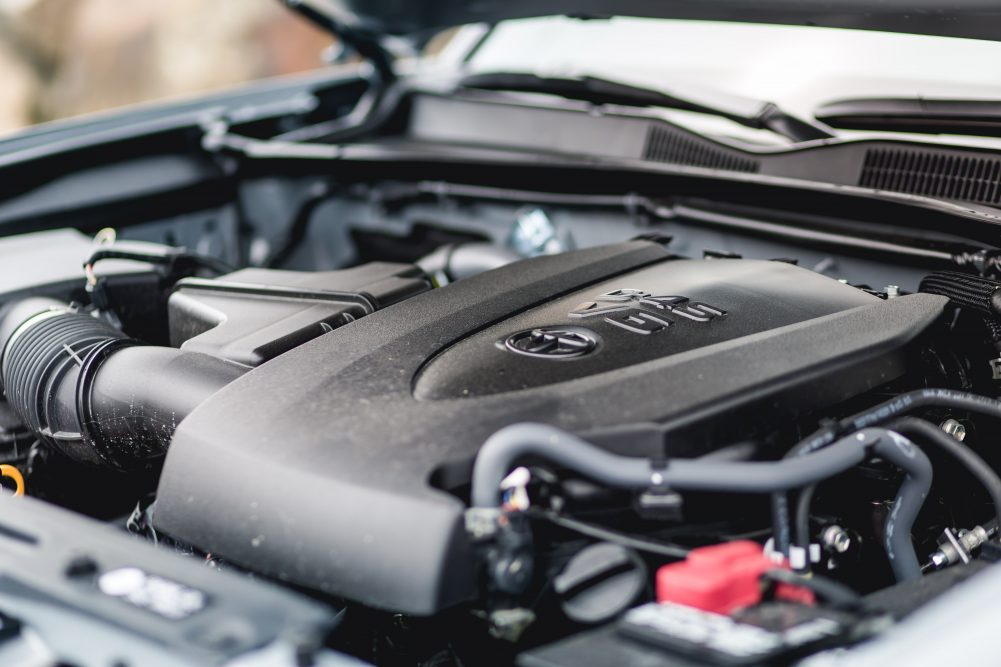 Acceleration is on the low side compared to the competition, however. But with the manual transmission, this Tacoma V6 still sprints from 0 to 100 km/h in the low sevens. Behind the wheel, the combination of shift-for-yourself action and that rumbling exhaust note contribute to a fun and sporty truck experience. And since that V6 makes most of its power up high in the rev range, I was happy to row through the gears myself. Actually, you can beat on this thing like it’s a Honda Civic. Don’t worry, it will never break – because Toyota.

Is That A Mountain? Let’s Climb it 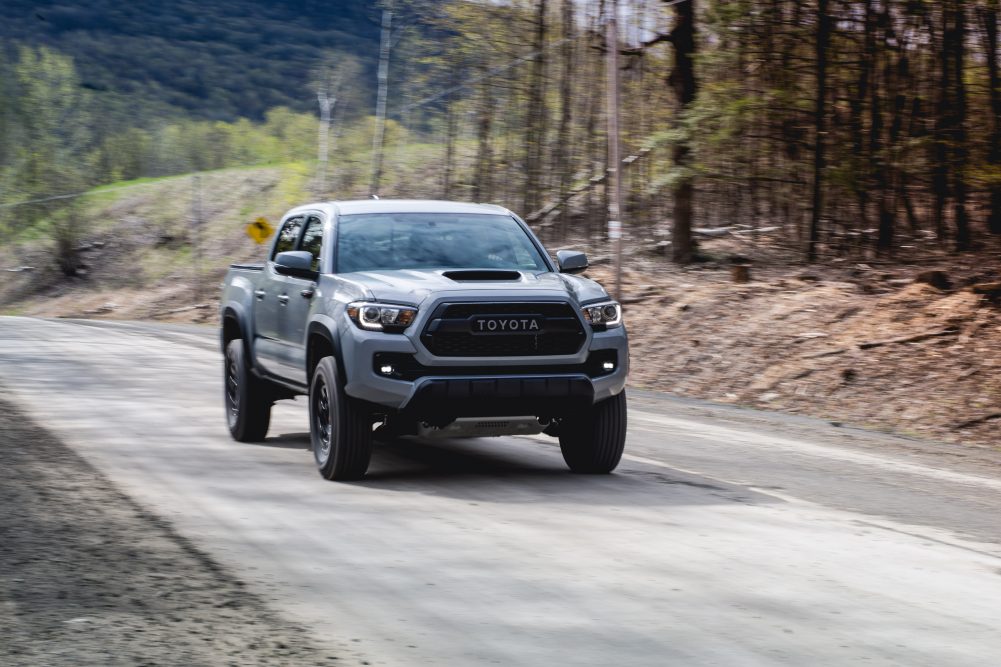 Unfortunately, Toyota Canada restricts any sort of off-road use with their press trucks, unless it’s done during one of their controlled events. Yeah, I know, sucks right? But I still allowed myself to try this thing in mildly rough terrain, places no car could approach, just to sample the TRD Pro’s claimed off-road credentials. I basically climbed a mountain through its mountain bike trails. What? 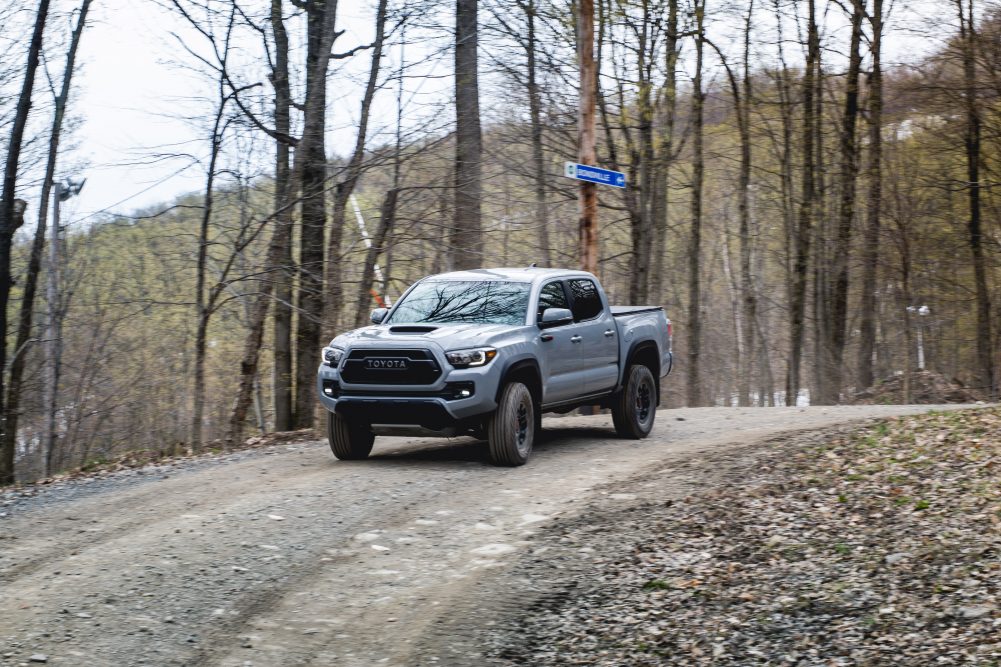 What I can tell you, is the TRD Pro’s modified suspension tuning is not only formidable at absorbing potholes on the road, it provides an equally plush ride even over the real hardcore surfaces. It just glides over holes and rocks smoothly and effortlessly. You also get a sense that it can do this all day long, and that it can take a lot of abuse. It will also crawl over pretty much anything. In fact there are so many toys to help you conquer obstacles, you won’t know where to start. 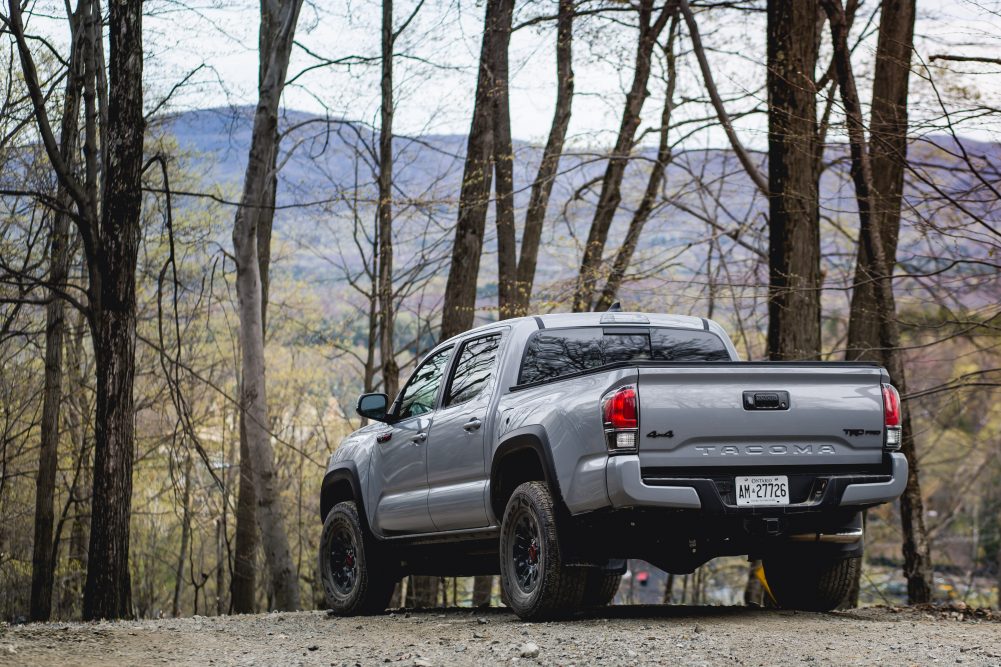 All Tacomas come with a manually selectable four-wheel-drive system, all controllable via a dash-mounted switch, complete with 4×4 lock, and low or high gearing. On the road, the entire system can be disengaged, turning this pro truck into a rear-wheel-drive drift machine. On the ceiling (an odd location), lies the traction management controls, where the traction control system can be fully turned off, giving way to nothing more than a limited-slip differential in the rear. Toyota’s A-TRAC four-wheel traction control system, an electronic traction assist system that uses selective braking to route power to the wheels that have actual grip, can also be activated from up there. 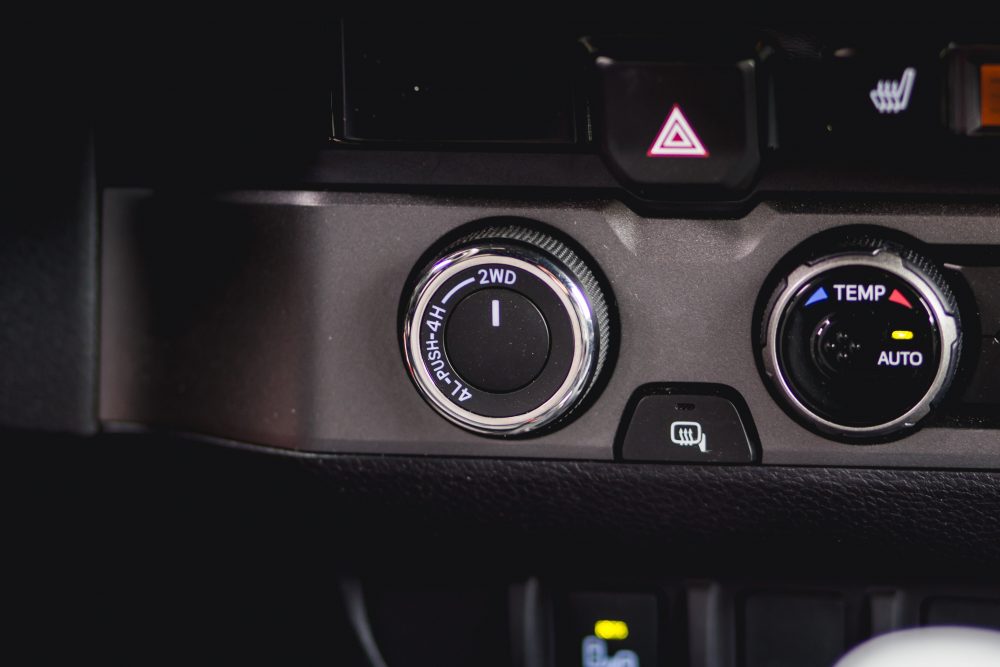 The only thing my tester was missing was Toyota’s famed crawl-control system, which can apparently get this thing out of thick sand, mud or snow in a jiffy. That automated feature is only available on Tacos equipped with the automatic gearbox. Sorry buddy, but you’ll have to crawl your way out of there yourself using – ahem- actual driving skills. You’ll be fine, just rock that shifter.

Legends Have a Price 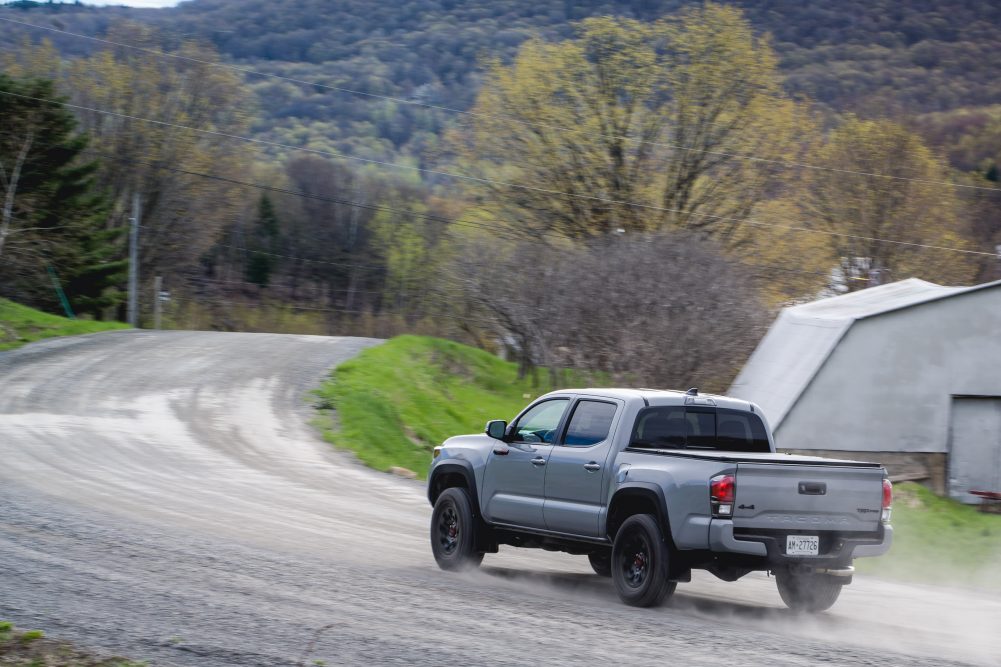 The great thing about the TRD Pro package is that it doesn’t hinder the Tacoma’s traditional light truck qualities. When equipped with the optional tow package, all V6-powered Tacomas will pull up to 6,400 pounds (3500 lb standard), placing it right smack between a Honda Ridgeline and Chevrolet Colorado. Unfortunately, the TRD Pro can only be had in the quad-cab, short bed configuration, which hinders payload capacity. But regular Tacomas can be customized to your liking depending on the type of cab you choose to take. 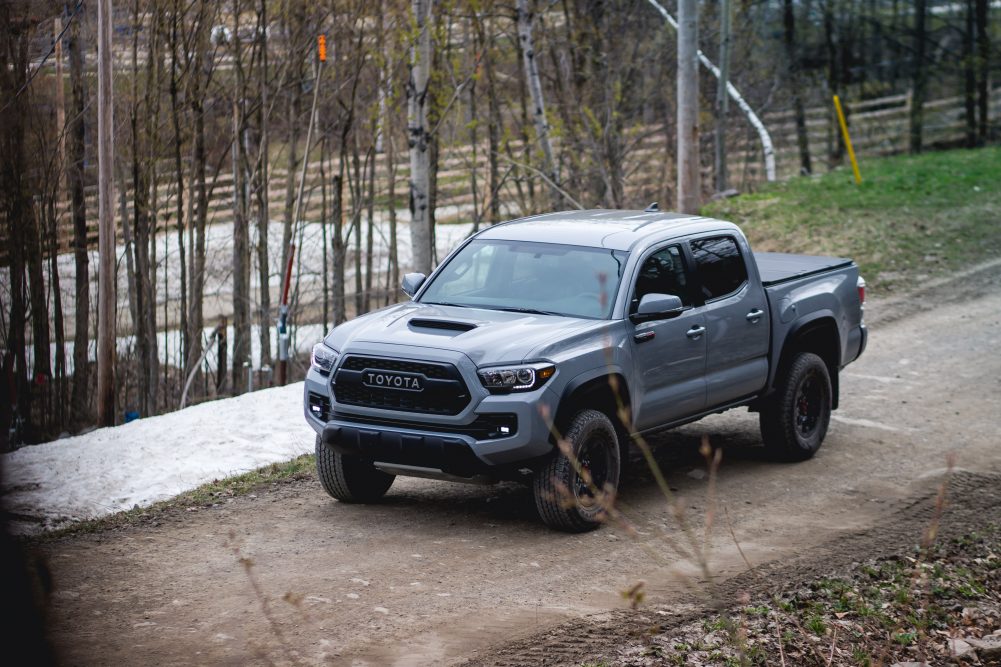 On the road, the Tacoma rides, well, like a truck. It wobbles around, and lets you know when you’ve driven over the slightest cracks, being a body-on-frame truck and all. It simply makes no excuses for what it is, which is why I absolutely adore the thing. Also, that off-road suspension gives the Tacoma a balloon-like race truck feel, where it bobs and weaves under hard steering inputs, but somehow manages to still handle supremely well. And since you’re sitting nice and high in it, it sort of makes you feel like a little kid behind the wheel. 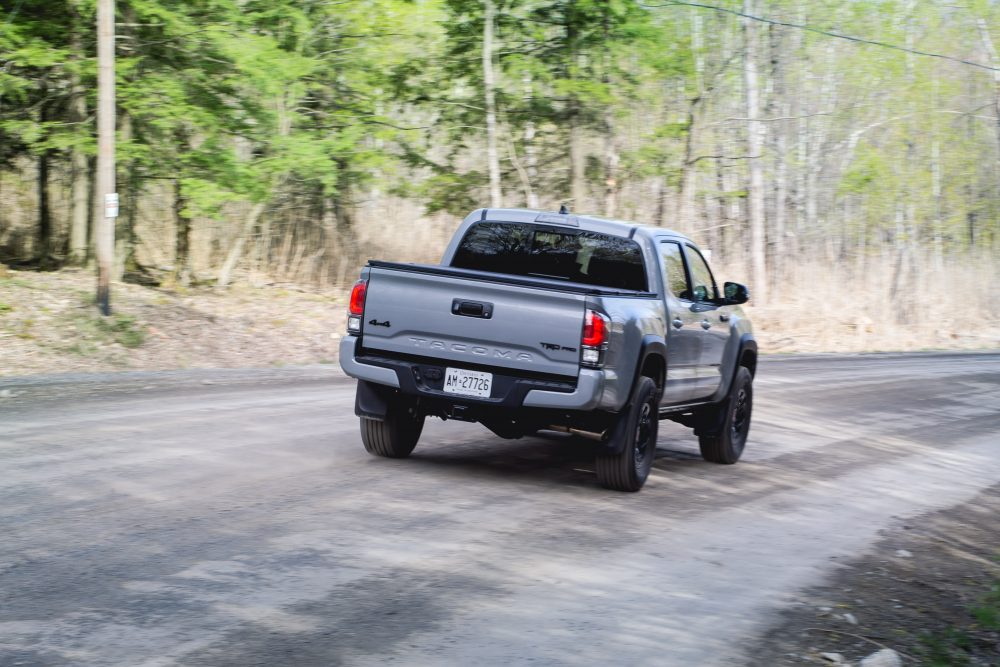 My only big gripe with the Taco TRD Pro was its fuel economy. Granted, it’s a truck, but even by truck standards, this thing is awful. I barely managed to keep it under the 14 L/100 km mark, which is what I would get in the larger, V8-powered Tundra. 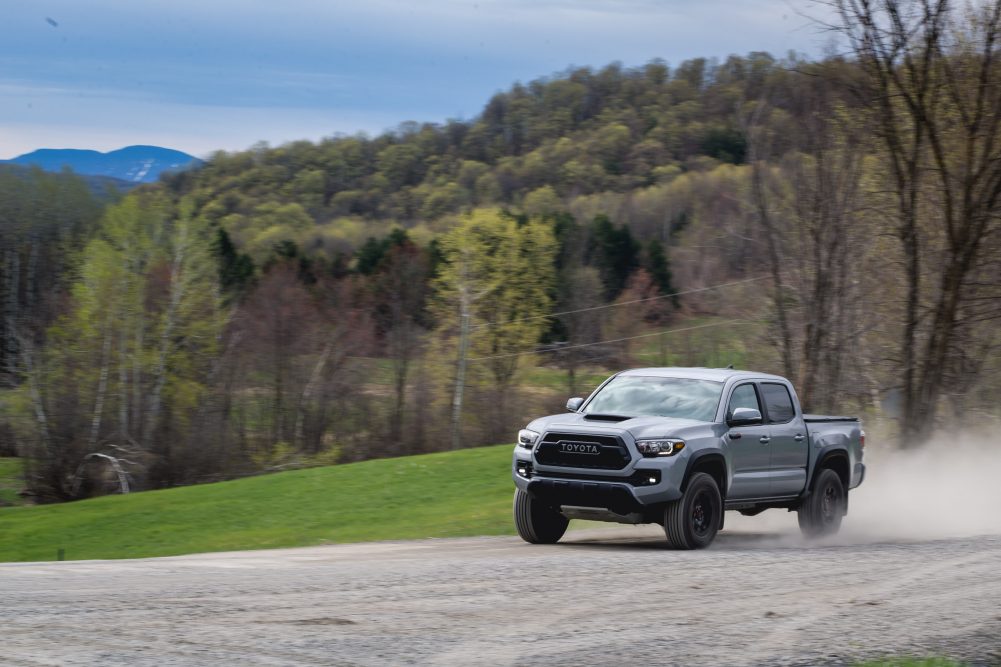 Prices for a 2017 Toyota Tacoma TRD Pro are not cheap. Since the package can only be added on one of the more expensive trim levels, the final bill comes to a grand-total of $52,384. Ish, yeah that’s steep. 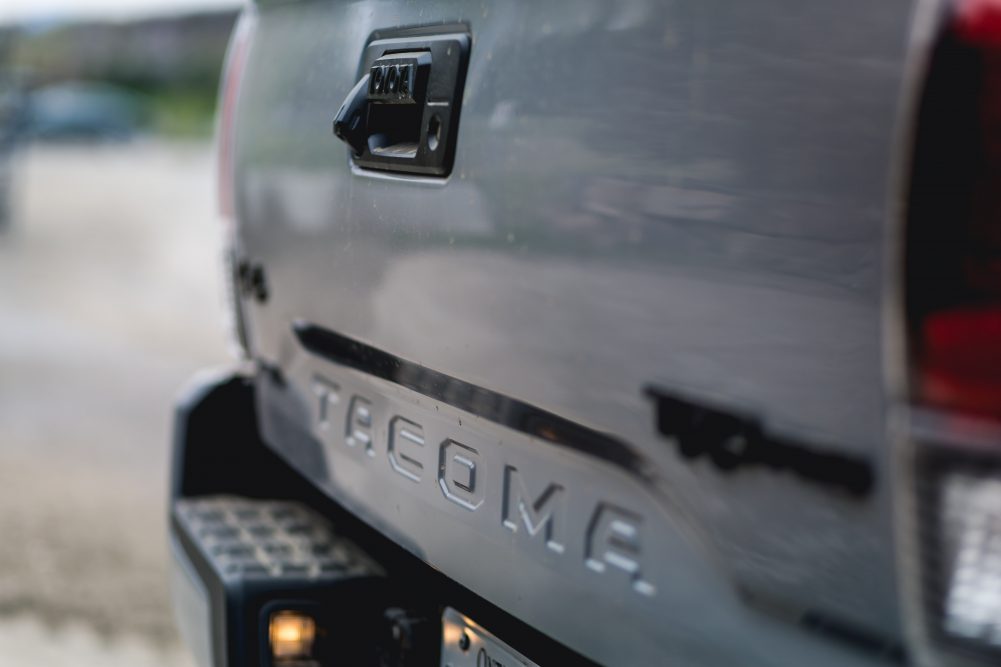 But then, consider this: the damn thing is already prepped to go off-roading, and backed by a manufacture warranty. Furthermore, it’s a freaking Toyota. It’s a legend before it even hits the streets. It will never die; will always get you out of trouble, and no matter how old and rusted it gets, everyone will find it cool and be ready to dish out ridiculous sums of money for it. This isn’t a truck, but a long-term investment – possibly the coolest one you’ll every make.