The Toyota Prius Makes Any Driver Care About Saving Fuel 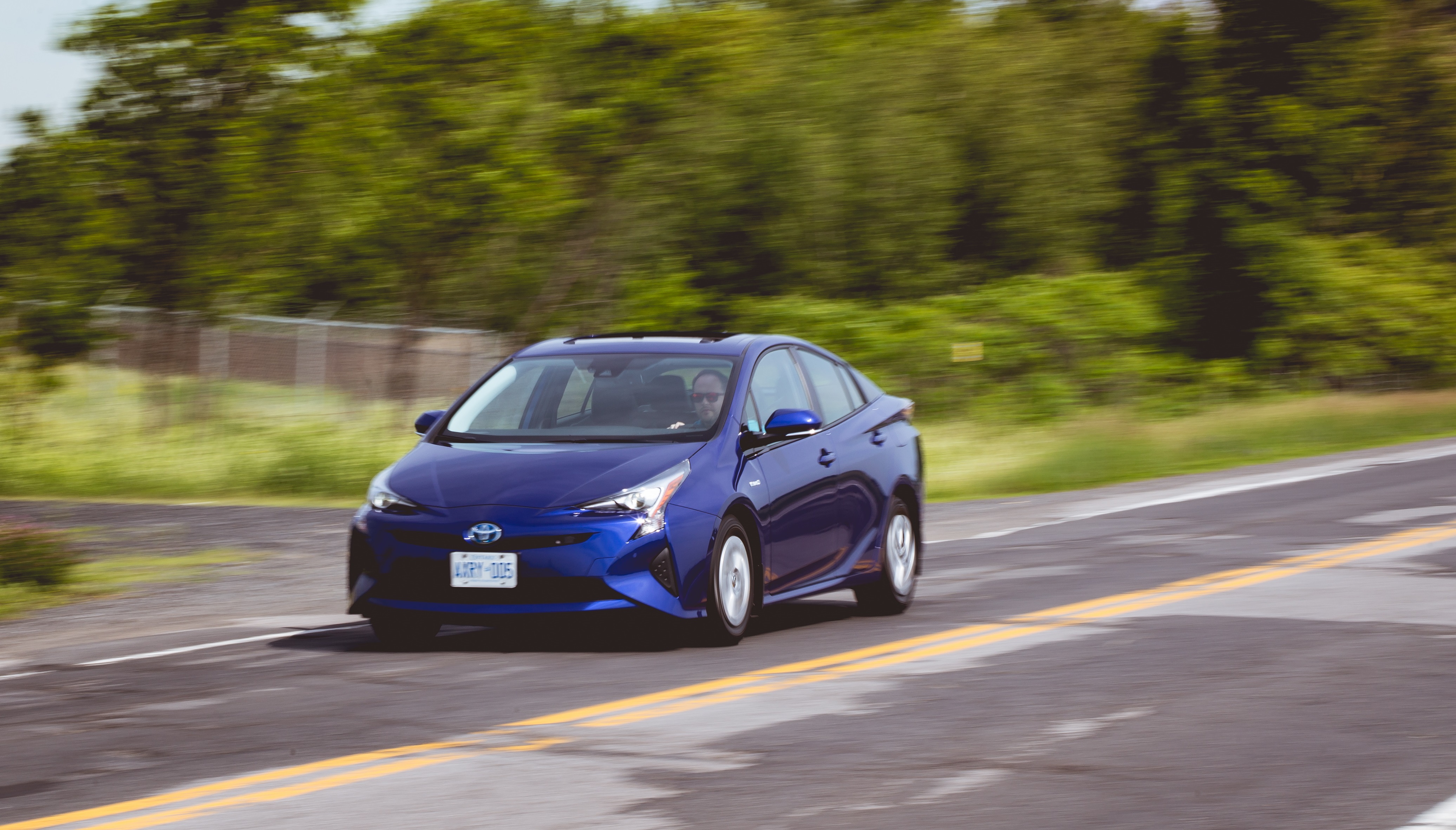 From an automotive enthusiast’s perspective, the Toyota Prius has always been the Antichrist of cars. Except for a low gas bill, there’s absolutely nothing about this oddly shaped gasoline/electric compact sedan that excites the senses.

Simply put, this is a car that was designed for people who don’t give a damn about driving a car.

But believe it or not, the Prius has some enthusiasts of its own. Quite a bunch of them too; since its introduction back in 1997, the Prius has found its way to the heart of 3.5 million owners, all of which, I’m sure, will undoubtedly buy another Prius when their current one dies out – which means never, because Toyota.

Indeed, the Toyota Prius has built itself an impressive cult following over the past 20 years. It is now the queen of hybrids; the pioneer of a segment of cars we all take for granted today. That said, when Toyota Canada offered me the opportunity to get behind the wheel of their completely re-engineered futuristic pod on wheels, I just couldn’t say no. Because even I, a hardcore automotive enthusiast, was curious to see what the hype was all about. 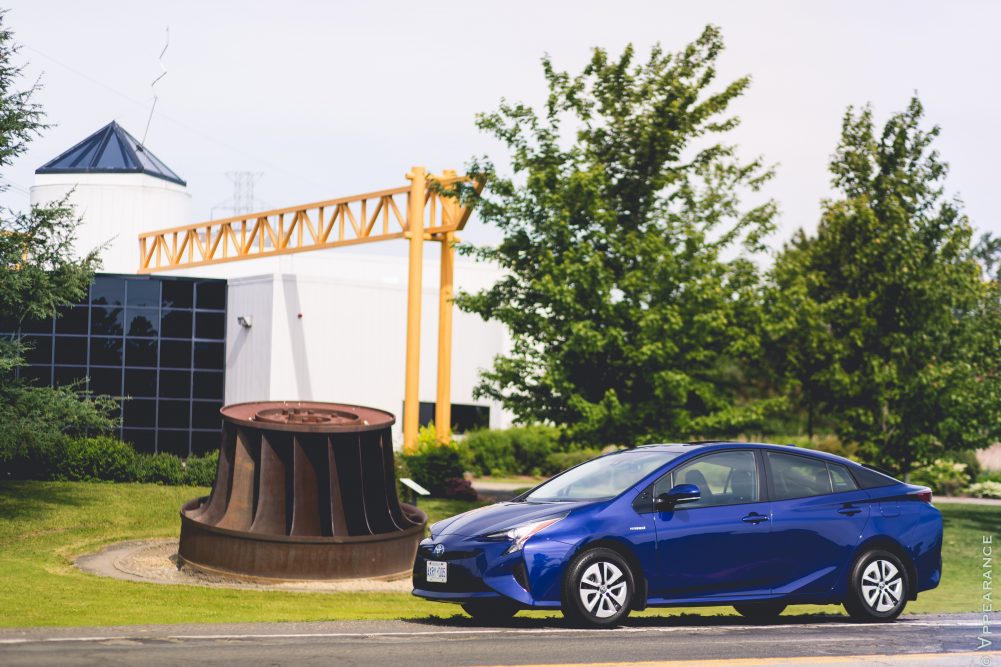 Let’s begin with the looks of this car.

Much more so in fact than any Prius that came before it. And I’m sure you’ve already made up your mind about the styling. But there’s a reason for this radical shape. You see, Toyota wanted to make their new Prius more exciting than ever, so they went all out on the drawing board, resulting in a very controversial, if not, almost too “avant-garde” design. I must admit, the first time I saw the 2016 Prius at the Montreal Auto Show, I was thrown off by its sharp edges, squinting headlights, and squared-off rear end. Back then, I had qualified this Prius has horrendous, saying it reminded me of a Lego block that had melted horribly in a microwave oven.

But now, after spending an entire week in the car and getting familiar with all the tech it offers, the styling has actually grown on me. This is the perfect styling for a car that makes you feel like you’ve just landed in the year 2050 the moment you get behind the wheel. Suddenly, this car looks just right – except for the tiny wheels that seem to get lost in the vortex of its giant wheel wells. 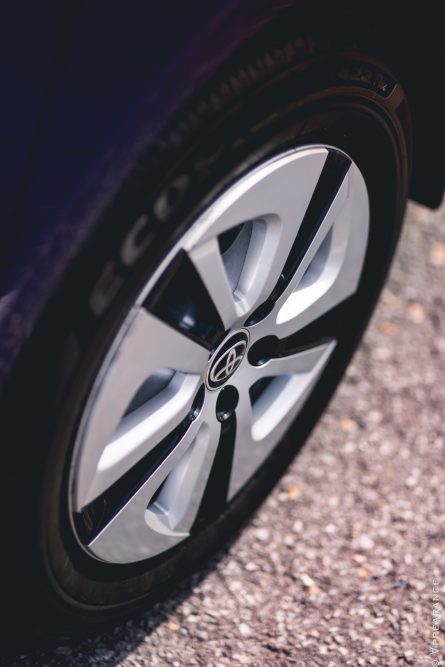 Inside, the time travel theme is carried over with a futuristic pod-like dash complete with a heads up display for monitoring Eco-friendly driving habits, a dual LCD screen configuration and a docking station that charges your smartphone wirelessly via Bluetooth. 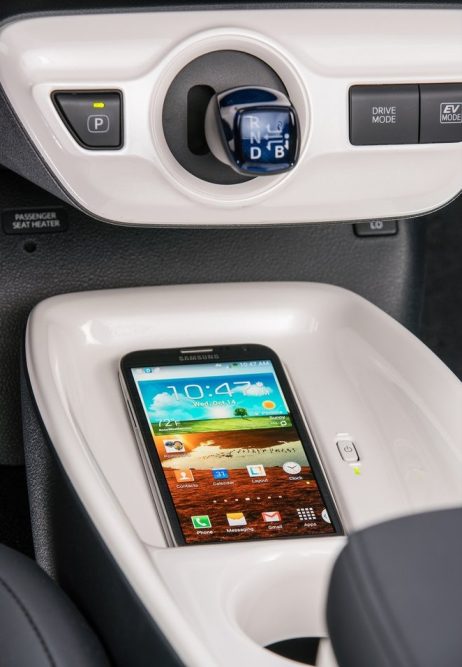 The amount of information that’s laid out to both driver and passengers is impressive, where fuel economy statistics and tips on how to save more fuel, as well as conventional climate control and navigation information are all clearly displayed both on the lower and upper screens.

In traditional Toyota fashion, controls are intuitive, the large touch screen is responsive and enjoyable to use, and except for heated seat controls that are hidden way behind the centre console, overall ergonomics and seating position are excellent if not superb. 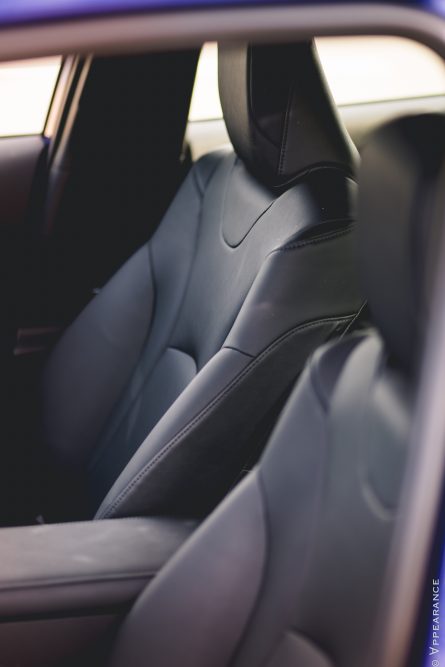 The 2016 Prius also boasts improved interior space with excellent forward visibility from that large aggressively raked windshield, and a cavernous trunk that I’m sure can engulf a mountain bike with the seats folded flat. 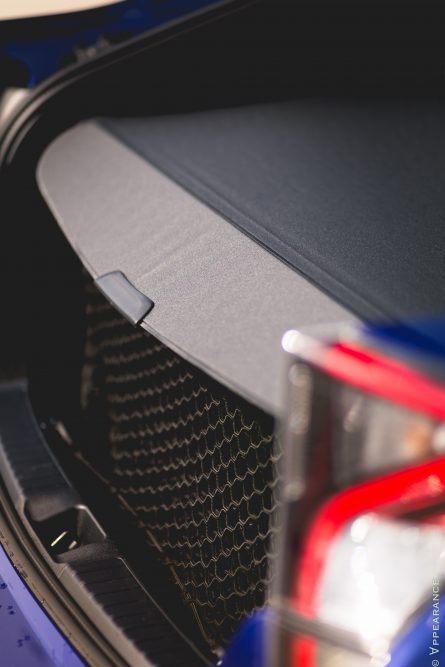 There is, however, a problem with rear visibility, where the split-window layout leaves a horizontal bar that sits right smack in the middle of your sight line, as well as bulging C pillars that lead to a somewhat awkward overall visibility, especially during passing manoeuvres.

But Does it Even Eco? 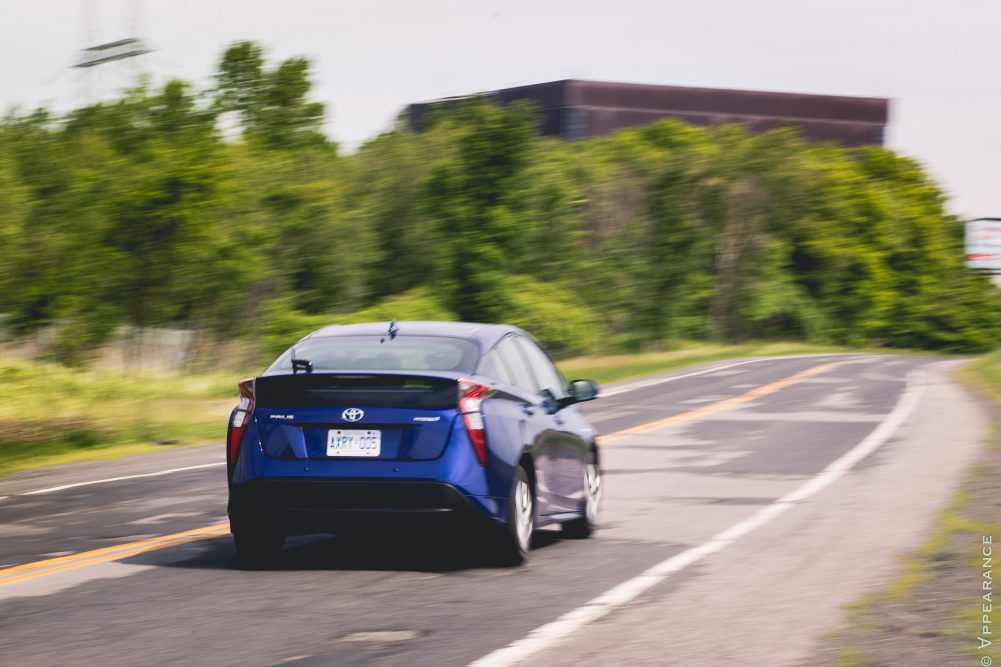 Of course, what Prius buyers will want to know is how much fuel they will save with this new model.  As many of you may know, the Prius’ drivetrain has always been a synergy of both gasoline and electric powertrains, where both engines continuously work in harmony and cannot be separated. This means that unlike some of its modern competitors, such as the Chevrolet Volt, which is an EV equipped with a tiny gasoline engine to recharge its batteries, the Prius continuously relies on both of its available drivetrains to get around. 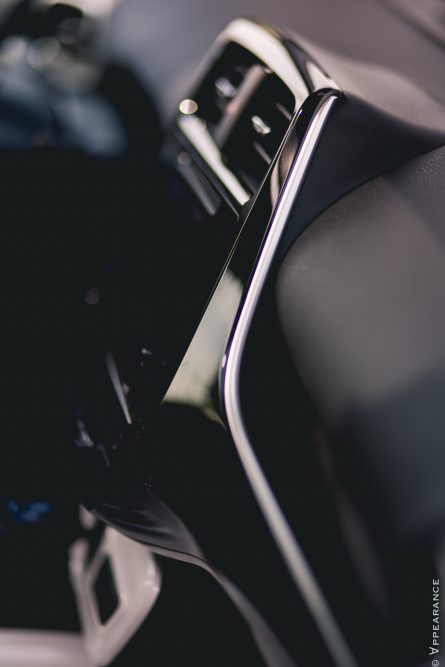 A benefit of this is that the Prius is a fully self-sufficient hybrid, meaning that it never needs to be plugged in.

Under the hood of the 2016 Toyota Prius is a completely overhauled version of the last generation’s 1.8-liter four-cylinder engine. This time around, it features redesigned intake ports, coolant passages and reduced internal friction for maximum efficiency. The engine also now runs on lower viscosity oil and even benefits from large volume exhaust gas recirculation. According to Toyota, these modifications boost thermal efficiency to 40%, the best of any mass-produced engine in the world. 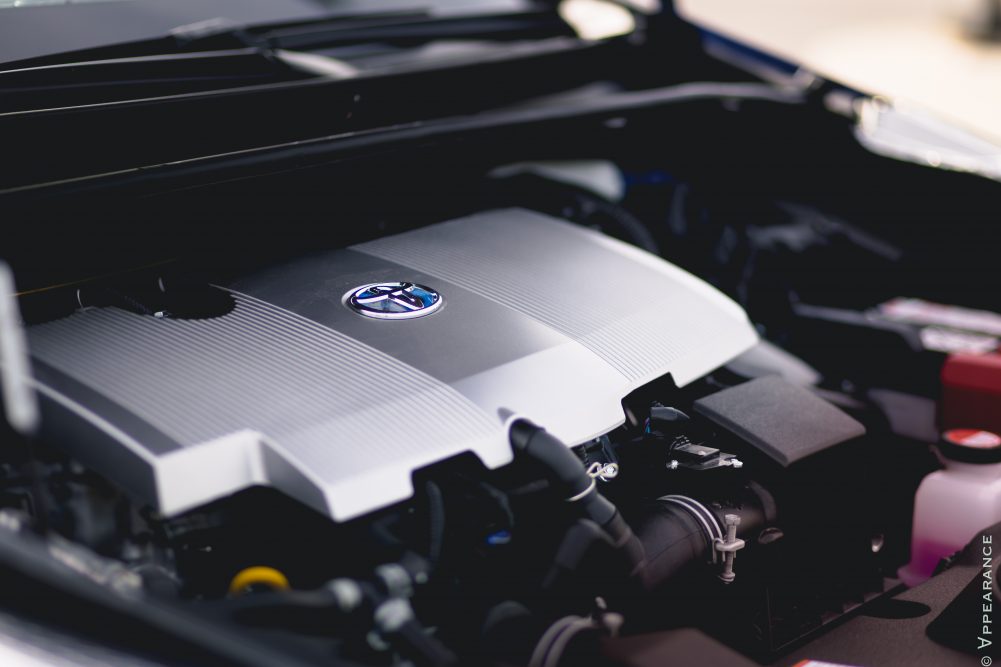 As for the electric stuff; both the electric motor and CVT transmission have been optimized to lower friction and weight, with the battery pack now being a lithium ion cell which helps hold more energy in a smaller package.

That’s all fine and dandy, but how does all this geeky stuff affect my gas bill? You might ask.

Quite a lot actually.

During the week I had my very blue Toyota Prius, I managed to average an impressive 4.4L/100 km while allowing myself to drive in all sorts of ways; air conditioning off or on, with and without passengers, driving like a hooligan/like my mother, on the highway and in city traffic. 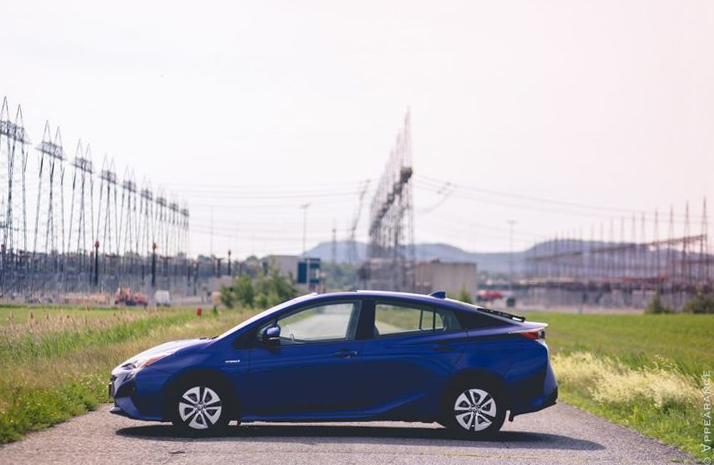 But the most impressive bit about the Prius is how it encourages its driver to save fuel. Most of the time I drove my Prius, I had it set in Eco mode, feathering the throttle to keep that consumption meter as low as possible to see how far I could go before the gasoline engine would kick in.

There’s even an EV mode. Activate it, and the Prius will creep discretely all the way to 35 km/h without sipping a drop of fuel. I do wish however that EV mode could last a little longer; more often than not, I’d find myself with not enough battery juice to leave it on.

The Best Prius Yet 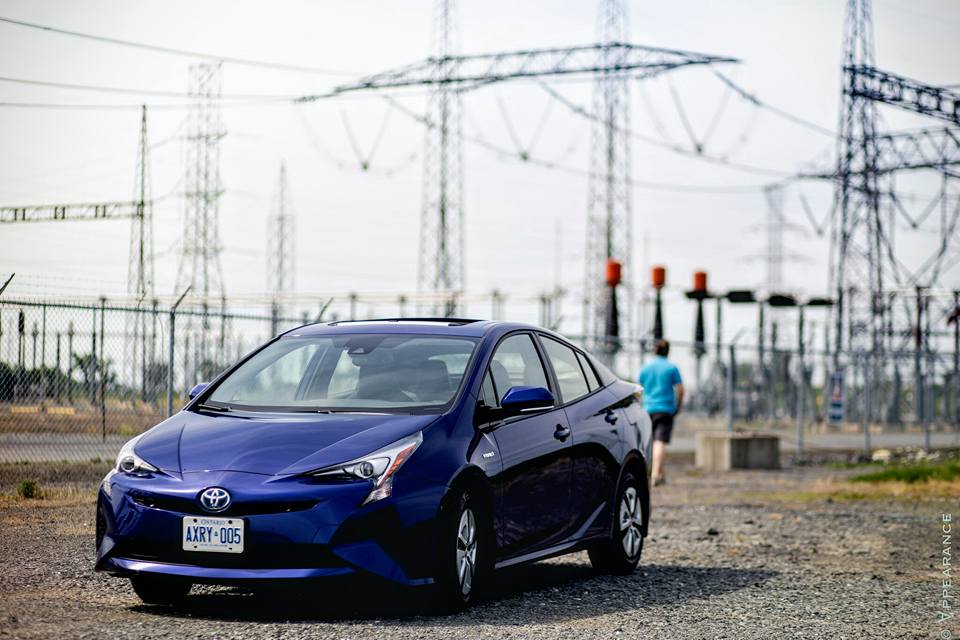 Toyota brags about how the new Prius is built on an all-new global architecture that will underpin a variety of small cars in future, not just hybrids. On the road, the now stiffer platform translates into surprisingly nimble and rewarding handling. By no means is this an exciting car to drive, but tortuous it is not. In fact, the Prius feels much more refined over the last model. Unnecessary quibbles when driving over rough roads are now almost non-existent and the new independent rear suspension is a clear improvement over the last car’s torsion beam setup, allowing this Prius to enter a bend quickly without feeling like it will split in half.

Not bad, not bad at all. 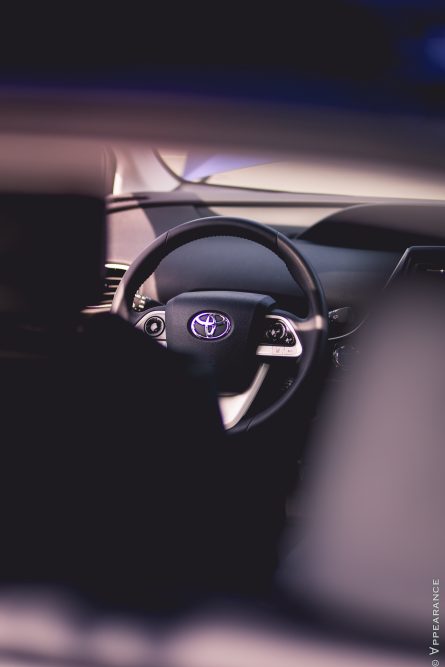 In fact, I must say that I was enjoyably impressed by this fourth-generation Toyota Prius in general. Where I was expecting to drive a cardboard box on wheels, I was instead presented with a car packed with high levels of sophistication, efficiency and somewhat fun-to-drive handling characteristics. Plus, keeping that eco meter in the green zone turned out to be a lot more addictive than I had anticipated. 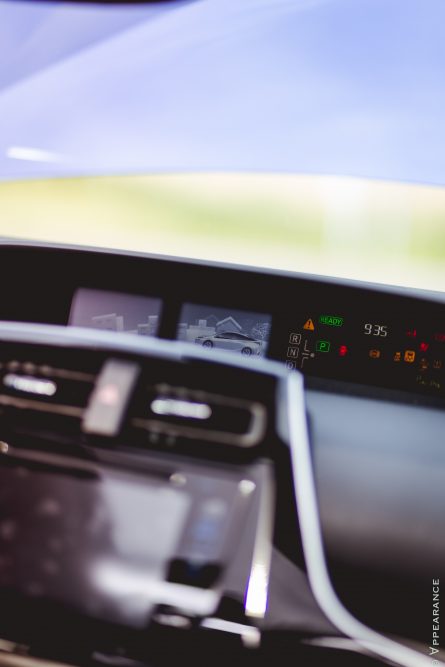 Prices for the 2016 Toyota Prius range between $27 950 and $33 945 for a top-flight Touring model. My tester was the Technology trim equipped with the Advanced package. It’s the Prius Toyota wants you to buy and it sells for $31 285, comes standard with pretty much all the tech in the book such as pedestrian detection, cross-traffic monitoring, forward collision mitigation with automatic braking and lane departure warning,  to name just a few.

The technology package also comes with its share of annoying beeps every time you approach anything – even a strand of hay. 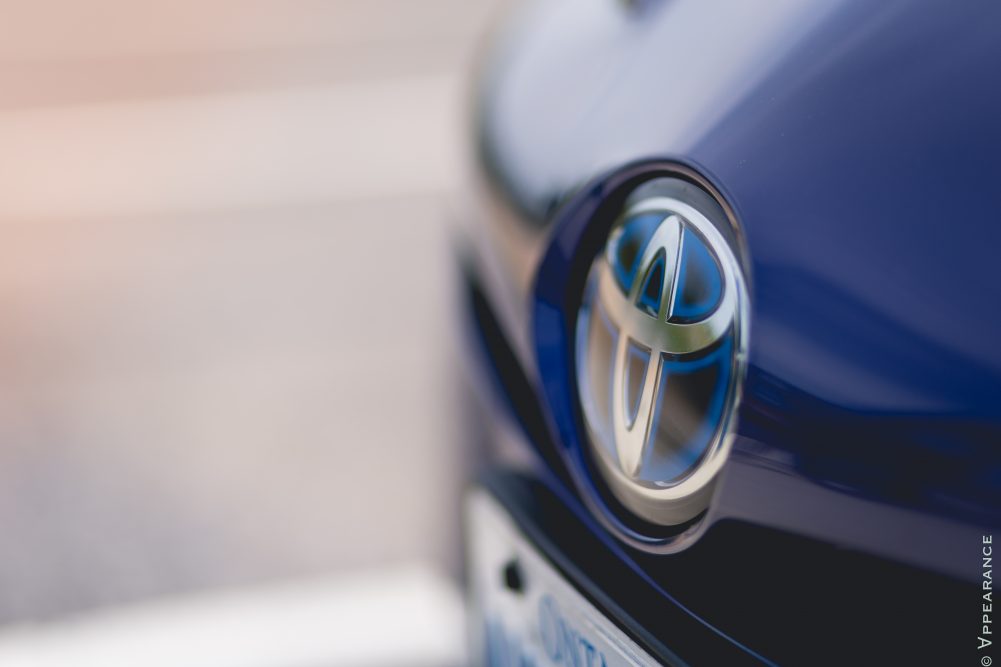 At the end of the day, the 2016 Toyota Prius is just too cool to be ignored and definitely fulfills its promise of delivering maximum efficiency, technology, and fuel economy at an attainable price. Yes, it’s still a bit soulless and some may argue that you can go out and buy much more fun to drive compact cars for less money, but no other vehicle comes close to the Prius’ efficiency, everyday livability and stellar reliability in that price range.

Indeed, the Toyota Prius sits in a category of its own and even with the modern crop of EVs and hybrids now available, it doesn’t really have any competition. That being said, you don’t change a winning formula and Toyota has done a fantastic job at improving on the Prius’ already impressive attributes. A new “love-it-or-hate-it” styling, a roomier and more comfortable interior, and more efficient, eco-friendly powertrains all add up to a Prius that should anchor its cult status for years to come.

Review of the 2016 Toyota Prius by William Clavey

–
– Limited rear and side visibility.
– Annoying bips for everything you do.
– EV mode is a bit of a gimmick.