This 2017 Volvo S90 Turned More Heads Than a Supercar 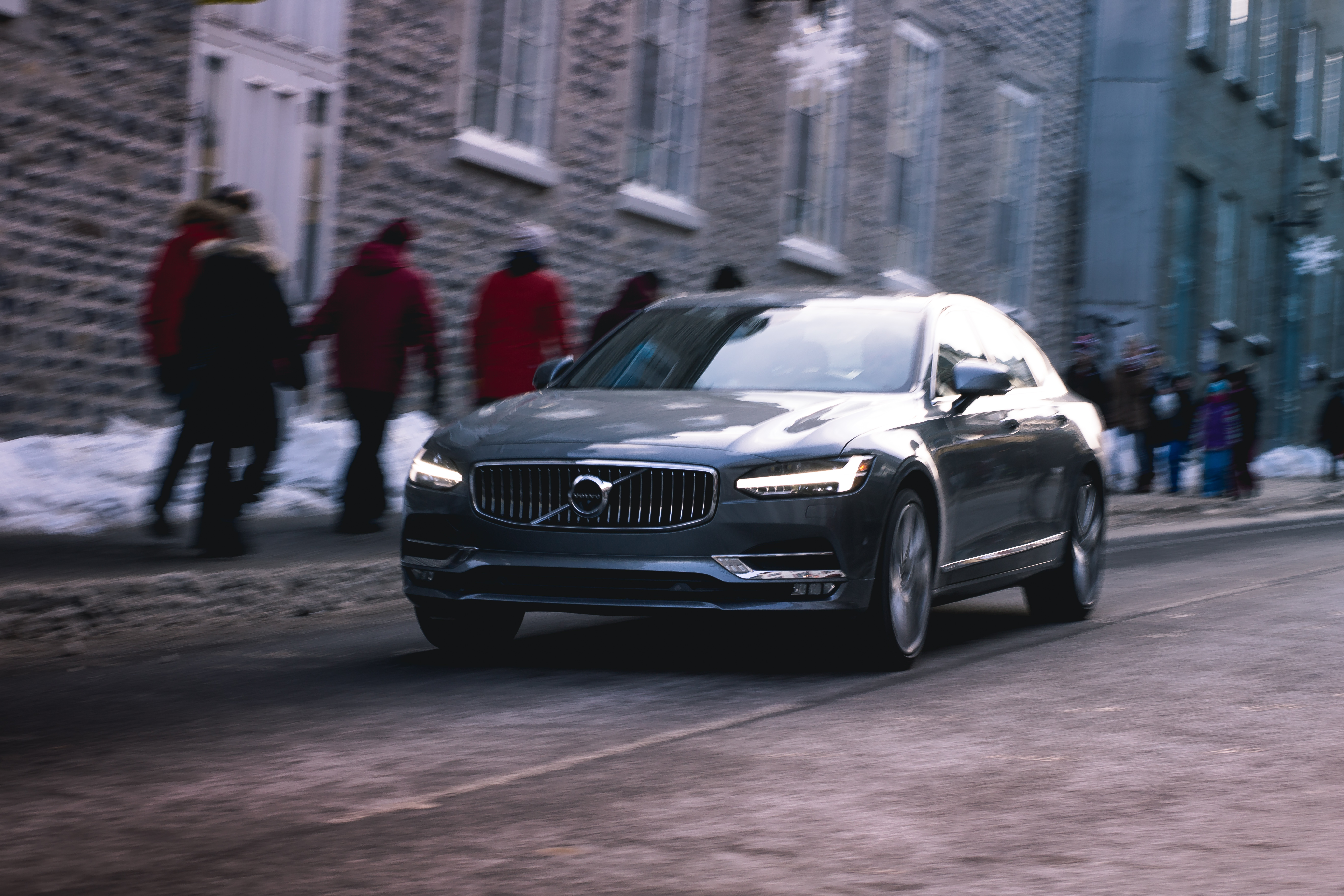 By now, you’re well aware that I’m completely in love with all things Volvo. Ever since I reviewed two XC90s in 2016, I’ve been tracking everything that comes out of the Swedish carmaker, instantly sending test drive emails to Kyle Denton, Volvo Canada’s media relations spokesperson, the moment I see something new being released.

The S90 you see here, well it was booked back in October. That’s the kind of waiting list Volvo press cars are getting at the moment.

I was curious to drive this car, first, because of the way it looks. When I saw its sexy cheekbones appear on my computer screen last summer, I instantly wanted to be seen driving, and ahem, exiting that thing. Two, and more importantly, I was curious to sample the XC90’s innovative T6 drivetrain underneath a lighter and more agile midsize sedan. It must be said, Volvo is solidly kicking ass these days, with a wagon and a Cross-Country version of the car you see here all now available for us to enjoy.  Seriously, how awesome is that? As an automotive journalist, you definitely want a piece of the Volvo pie at the moment. And after attracting massive attention last summer wherever I went with the XC90 R-Design, I was curious to find out how many heads I could turn with this gorgeous Scandinavian sedan. So I drove it up to Québec City during carnival weekend to find out. 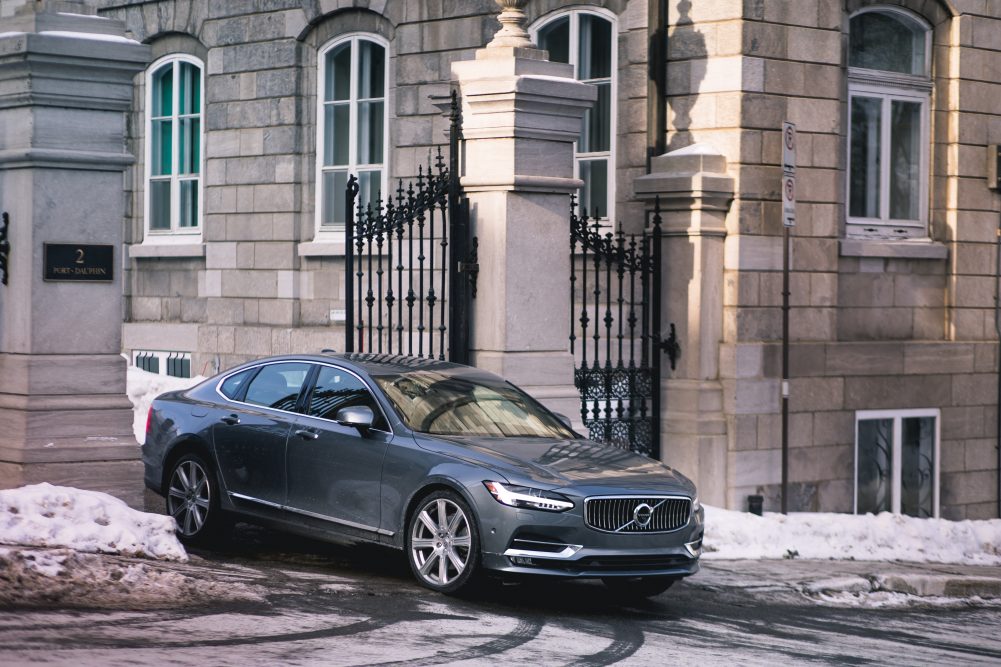 That’s how Volvo calls its new design language, which caused quite a splash when the XC90 was released. The ripples from that splash are now trickling down to the rest of the Volvo lineup with this: the S90 midsize sedan (even if it leans more towards full size sedan dimensions), Volvo’s second all-new from the ground up vehicle under Chinese ownership. 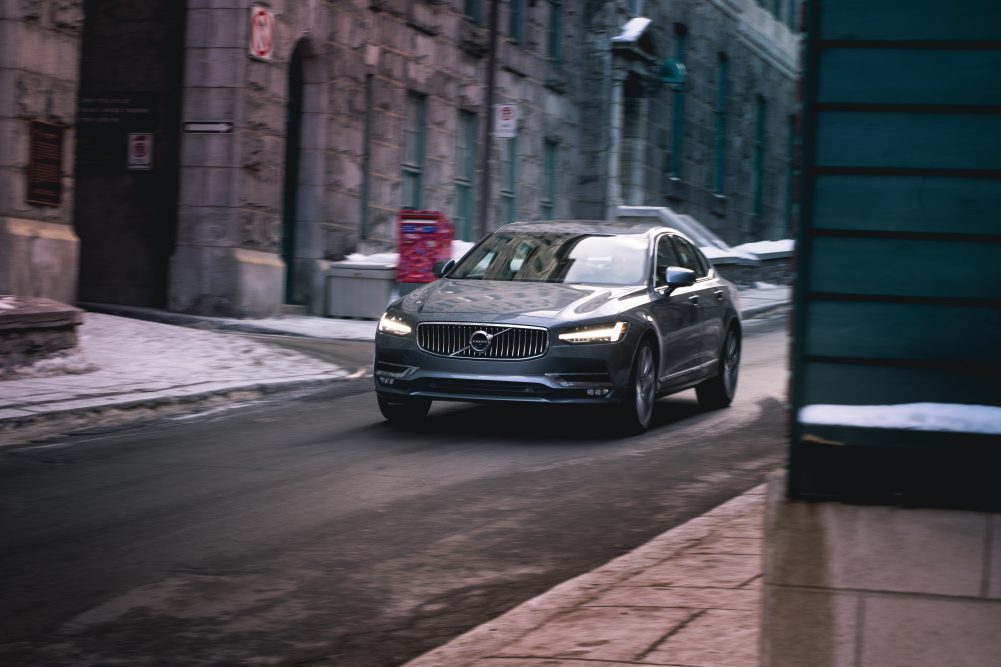 Isn’t this a stunning automobile or what? The term “Relaxed Confidence” is indeed the best way to describe this Scandinavian sculpture on wheels. The S90 is an imposing yet svelt sedan, with a bold front fascia that’s accentuated by the widest grille to have ever been slapped onto a Volvo automobile. The Thor’s Hammer signature LED headlights from the XC90 remain, with clean lines that flow smoothly to its rather unconventional rear taillight treatment (I really dig that rear end), and a coupelike roofline that elegantly rakes down towards the squared off trunk. 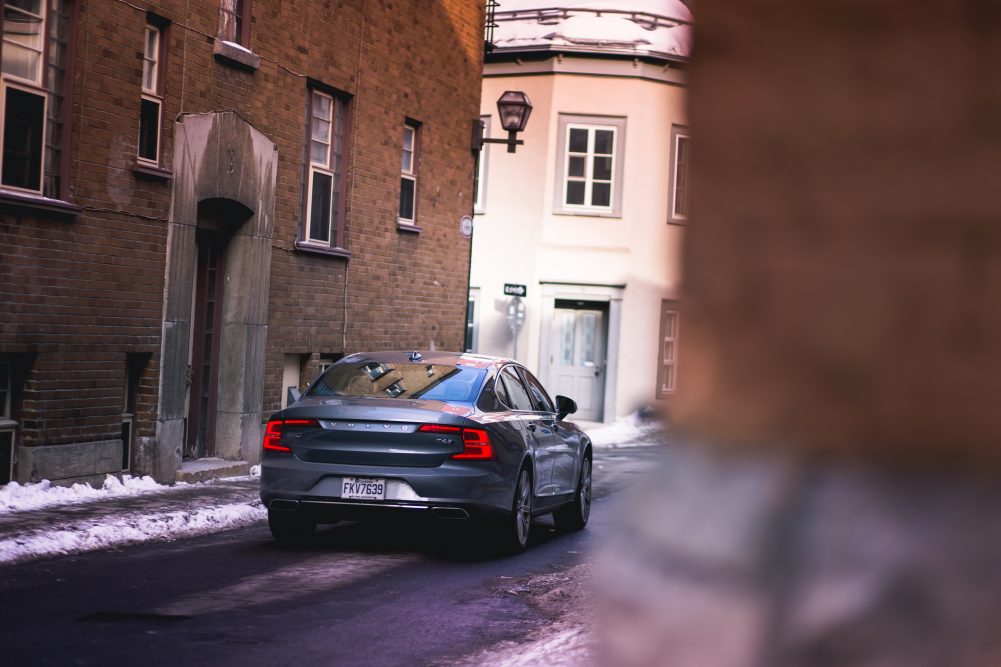 This is a pure, unadorned, and modern design – holy living shit this is a beautiful car. And with those massive and equally stunning 20-inch alloys sitting at all four corners, the S90 comes through as both graceful and sporty as its driving down the road.

About those 20-inch wheels, normally Volvo Canada wouldn’t fit them onto the car during the winter months, especially with the pitiful condition of Québec’s roads. But for the sake of, well, media purposes, my press car had them installed on Pirelli Scorpion low profile winter tires. I think you can guess where I’m going with this. After hitting yet another one of Montreal’s inevitable potholes, my S90 ended up on a flat tire the second day I had it. For those who know me, that’s classic Clavey karma at its best. 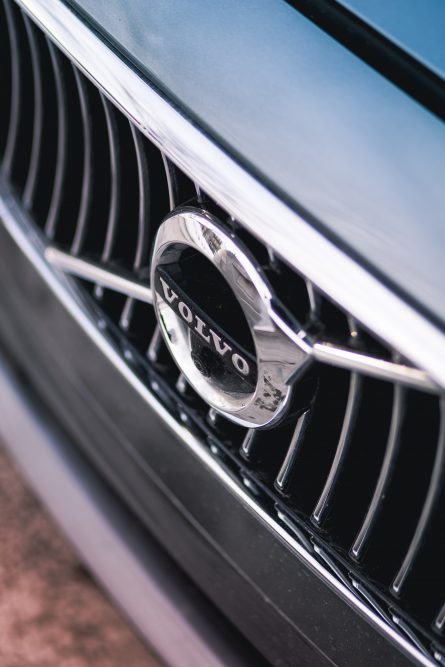 Luckily, Volvo Canada’s roadside assistance service proved to be impeccable, with a tow truck sent over within the same hour, and the car shipped to the closest Volvo dealership to replace the tire. In this case it was Volvo Brossard, which, after performing a few recalls while they changed the tire, had my luxury sedan back up in a jiffy all while offering a free ride to the office and back during the time my S90 was being serviced. Volvo Canada payed for everything. And both Volvo Brossard and Volvo Laval, the dealership usually in charge of handling Volvo press cars for the Québec region, proved to be collaborative, friendly, and very professional.

The Star of the Carnival 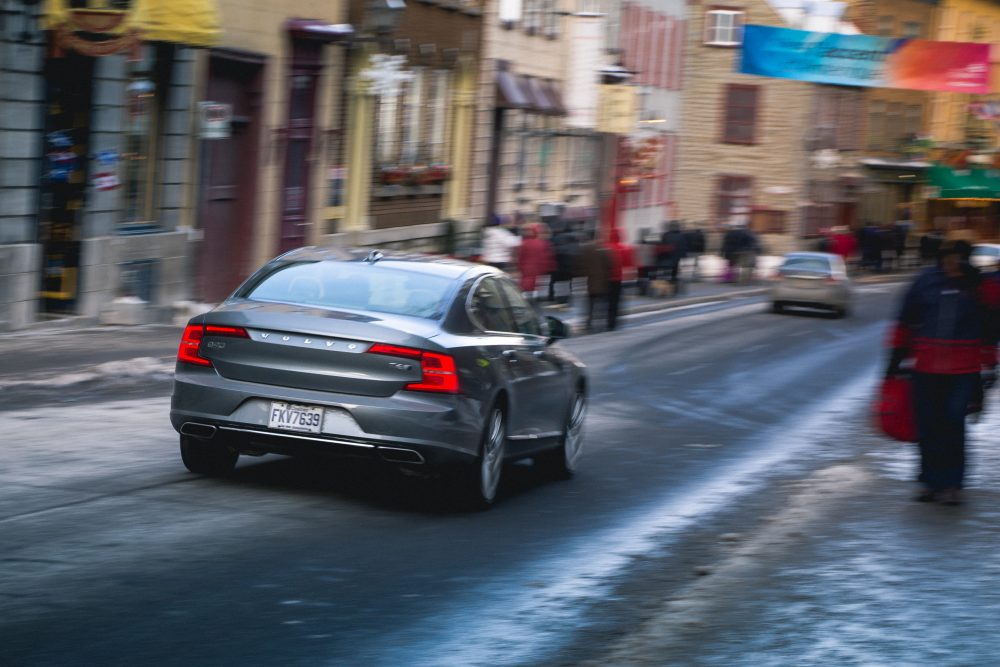 So yeah, driving up to Québec City during carnival weekend was quite a revelation as to how mindblowingly attractive the S90 is. Everyone, at every street corner, eyed the car out, pointed at it, thumbed me up, and in some cases, even took some pictures of it. Myle and I felt like superstars. And driving up to the capital from Montreal also allowed me to sample this luxury sedan’s sumptuous interior during long trips. Inside, the S90 is very much the same sweet sauce as in its sport utility brother, with fresh cow hides covering seats, door inserts and dashboard components, real wood trim over the passenger air bag, behind the steering wheel, and, as in the XC90, across the centre console. 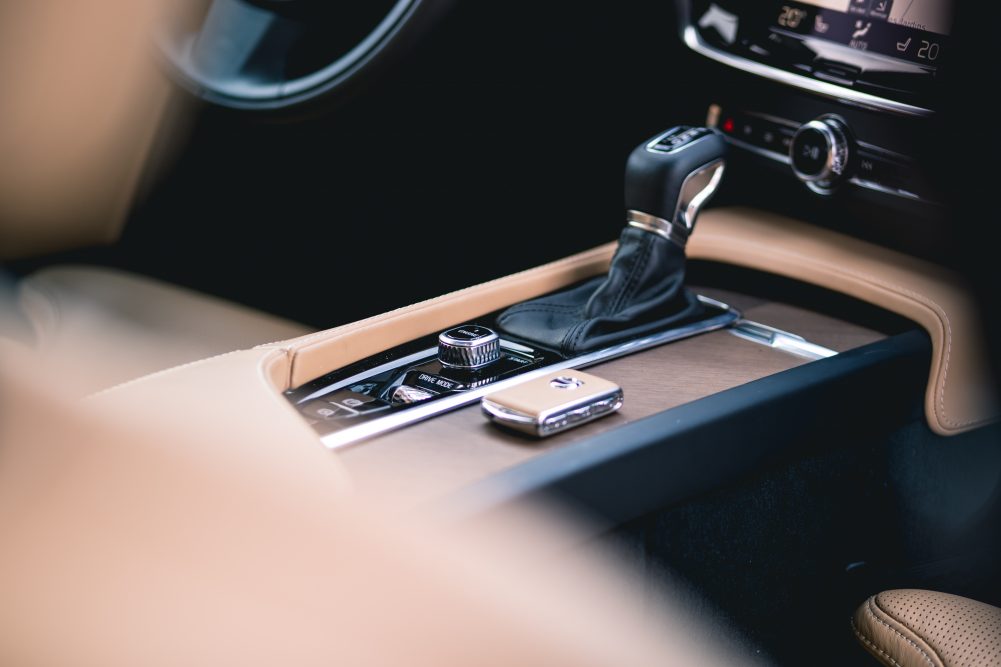 It’s all magnificent to behold of course, and the S90’s seats, as with all Volvo cars and trucks, are probably the most supportive, relaxing, and comfortable sets of chairs in the industry. Rear seat and head room is abundant, but I would have enjoyed some kind of seat adjustment back there. 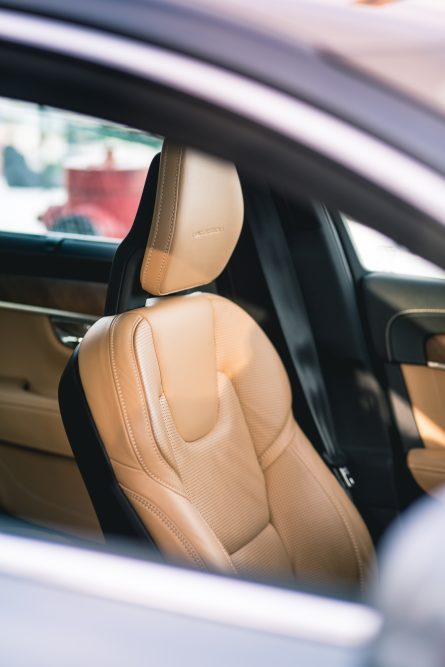 The centre stack is dominated by Volvo’s now familiar tablet-like touch screen interface, which, after taking a few minutes to get your head around, remains easy to operate, quick to react, and very attractive to look at. I continue respecting Volvo for leaving large physical knobs for the controls that matter. 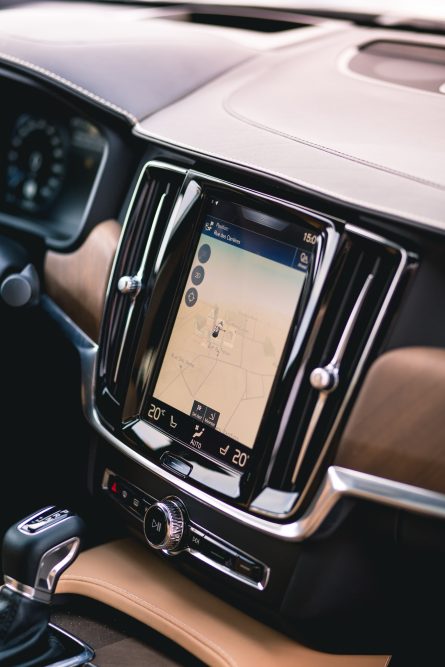 I was rather disappointing at how noisy the S90’s cabin was at highway speeds. It’s a quiet and smooth ride, no doubt about it, but after spending some time in the buttersmooth Lexus IS, I couldn’t help but notice the S90’s tire roll. Granted, this probably had something to do with those low profile tires on them flashy wheels, but I’m sure Volvo can do better than this. Also, as compliant as the S90’s suspension attempts to be over rough surfaces, it’s calibration leans more towards a sporty ride, and proves itself to be somewhat jolty at times – with occasional chassis quivers felt here and there, just like I had experienced in the XC90. The S90 feels stiff on the road, but unfortantely it’s chassis sometimes has trouble coping with that, and doesn’t feel as rock solid as some of its German competitors. 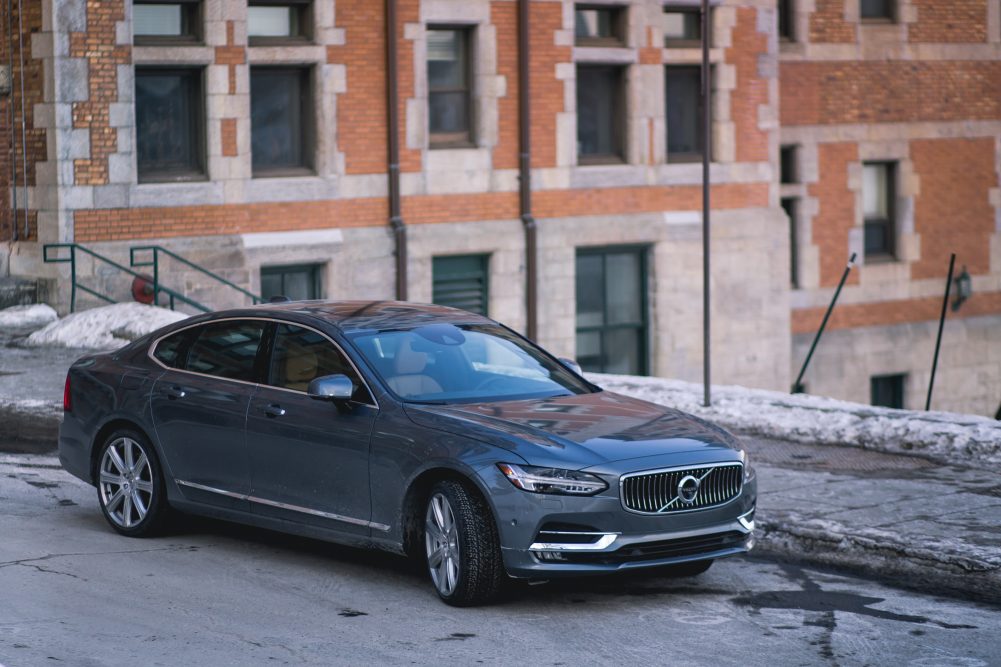 This firm suspension calibration, however, proved to be efficient when putting the S90 through its paces. The car feels well planted to the ground, body roll is kept low, and the entire car feels much smaller than it actually is. Turn in is sharp,  and braking performance is equally impressive,  and you can really fling this car around hard in total confidence. The end result is a above-average roadholding characteristics on par with the best sports sedans out there. Like in the XC90, three drive modes are available through a conveniently placed and insanely detailed roller switch on the centre console: Eco, Comfort, and Dynamic (and Individual for custom settings). 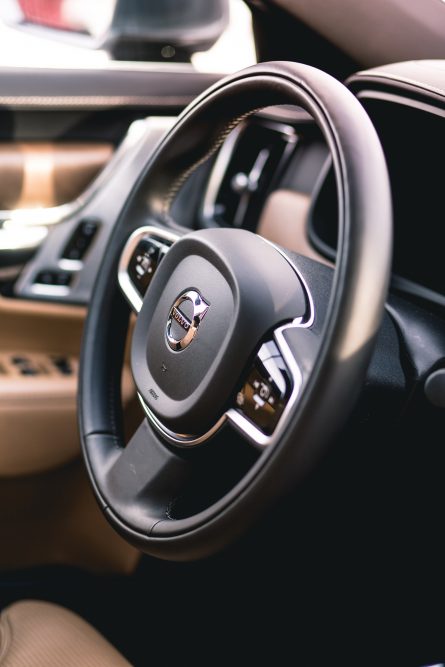 Each drive mode significantly changes the car’s overall characteristics, with Dynamic stiffening up the suspension, steering wheel, and transmission mapping. Unfortunately, Dynamic proved itself to be too erratic in normal driving situations, where the car always felt like it was pulling me at the end of a leach, and could only be fully appreciated when I was really nailing it.

I’d recommend leaving everything in Comfort mode. It suits this elegant sedan much better. 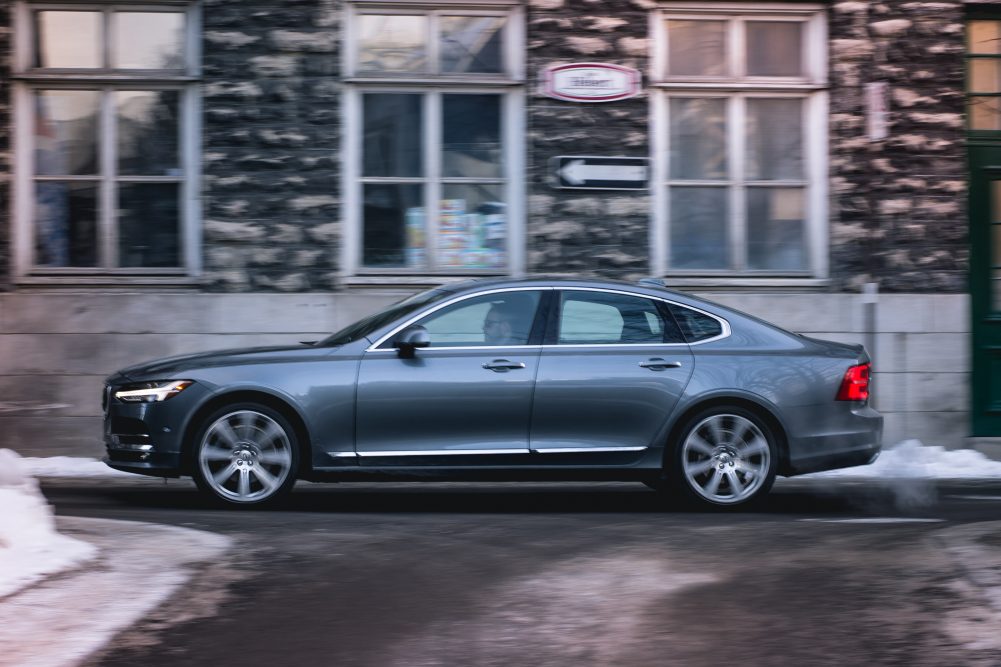 Under the hood of the 2017 Volvo S90 lies the same T6 engine as in the the XC90 – I repeat, no, it’s not a 6-cylinder turbo. In case you haven’t been following, Volvo engines of late are raising the bar of engineering development and efficiency. So the T6 is actually a 2.0L four-cylinder – yeah, four cylinder, that’s both turbocharged and supercharged. The end result is a rather class-leading 316 hp and 295 lb-ft of torque. The T6 can only be had with all-wheel drive and an 8-speed automatic transmission – essentially a carbon mechanical copy of the XC90 T6 R-design I drove last summer.

For the moment, T6 and AWD are the sole drivetrain configurations available for the S90. A 250 hp T5 (2.0L turbo only) with front-wheel drive, as well as the XC90’s T8 Hybrid package are expected to follow down the line. 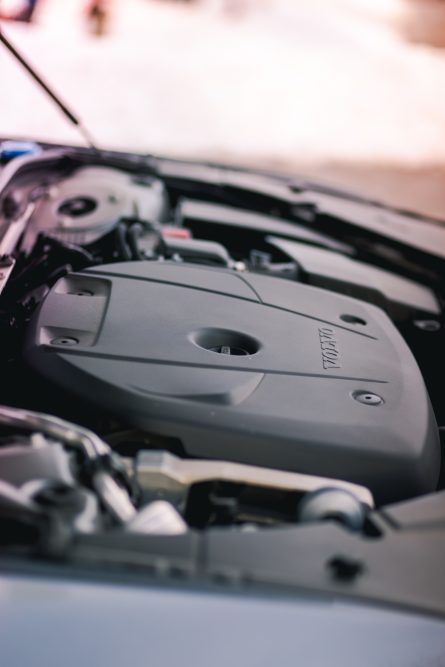 That T6 continues to be my favorite of the new Volvo engines. It’s surprisingly peppy, with excellent throttle response thanks to the supercharger, and an absence of turbo lag. Acceleration is brisk, thanks to a transmission that quickly downshifts when extra juice is required, and upshifts smoothly in the background without attracting too much attention to itself. 0-100 km/h, according to Volvo, is achieved in a sports sedan appropriate 5.6 seconds – aa smidge under a Mercedes-Benz E400 4Matic which uses a V6 to pull the stunt. It’s important to underline that the S90 accelerates faster to 100 km/h than all its German, Japanese, and American four-cylinder rivals. 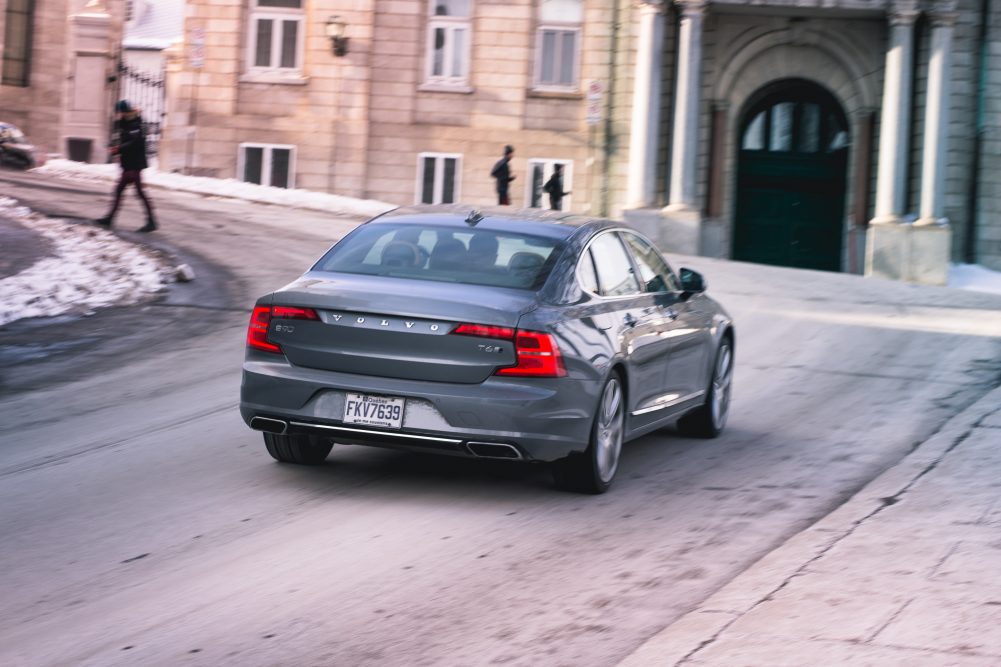 As much as I’m impressed by that four-cylinder’s power deliver, it does feel a little harsh at times. Being a 4-pot means it sounds frantic in the higher rev range and will emit a low-rent drone when under stress.  The moral of the story here, is that nothing beats the smoothness of a V6 engine. What the T6 lacks in melody, however, it makes up in fuel economy. This remains a Volvo strongpoint, and the S90 doesn’t disappoint, where I managed a 7.6 L / 100 km average, with occasional mid fives during highway cruising! Now that’s impressive considering the size and power of this thing. 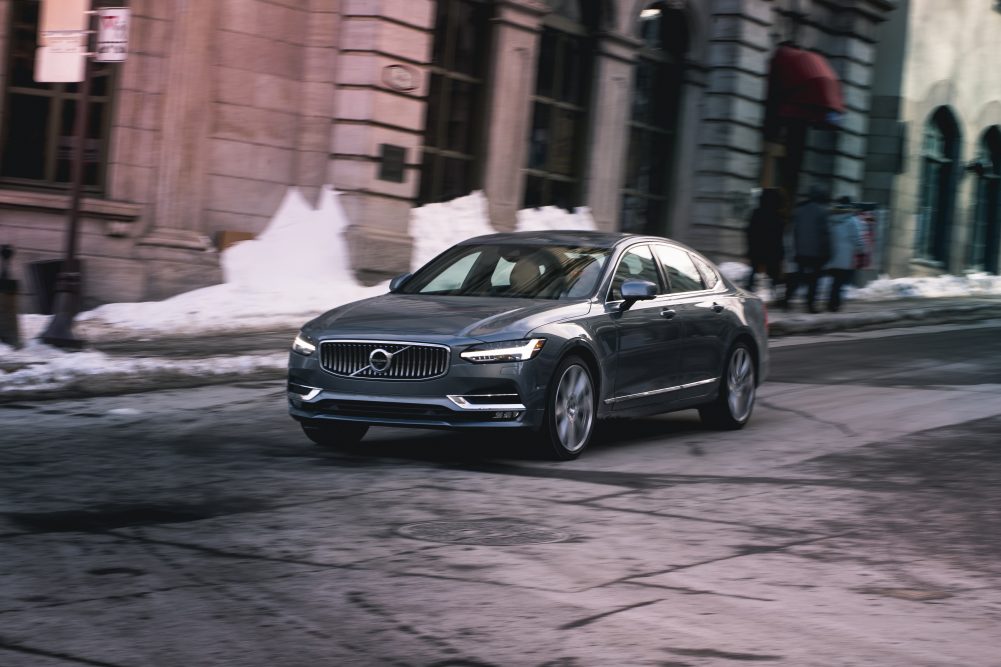 On my way back from Québec city, the Volvo and I ended up pinned in a solid snowstorm on the highway, ideal conditions for a Scandinavian built automobile whose main focus is safety and peace of mind. The S90’s all-wheel drive system proved to be impeccable in harsh climate as the car plowed through the snow in total stability and confidence. I even took a few minutes to pull over in an empty parking lot to sample out Volvo’s excellent Haldex AWD system, which although being front-wheel drive bias, will transfer up to 95 percent of the available power its rear wheels.

And I can assure you that when all traction systems are turned off, this flagship sedan will pull clean and impeccably well balanced powerslides. 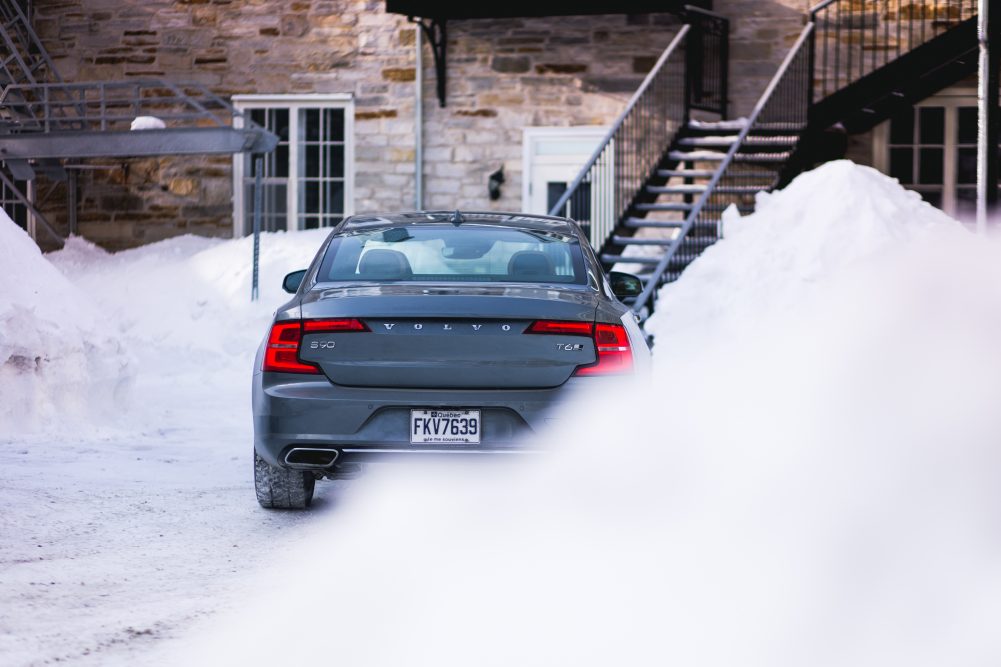 Pricing for a 2017 Volvo S90 begins at $56 900. The model you see here is the Inscription trim, a $6000 package which goes a step further in the luxury chain with the added wood trim, the magnificent tan interior, those stunning 20-inch wheels, the available drive modes I mentioned earlier, adaptive headlights, and the kickass Bowers & Wilkins audio system, complete with brushed aluminium tweeters in the door inserts and on the dashboard. That sound system sounds just as exquisite as it looks. 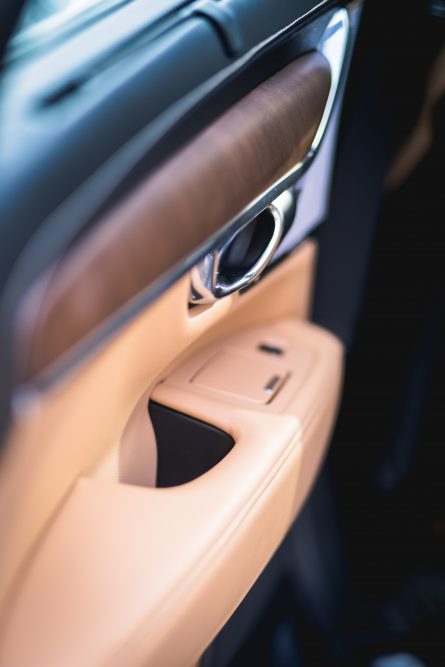 As with all Volvos, the S90 comes standard with pioneering safety technology such as anti-whiplash headrests, a convenient heads-up display interface, one of the smartest adaptive cruise control systems I’ve ever witnessed, a collision mitigation system with automatic braking, blind spot monitoring, cross traffic monitoring, roadsign and photo radar detection (very useful), and a driver alertness system. The S90 also boasts the latest in Volvo semi-autonomous technology with the innovative Pilot Assist system, which allows the car to literally drive itself in heavy traffic up to about 45 km/h. 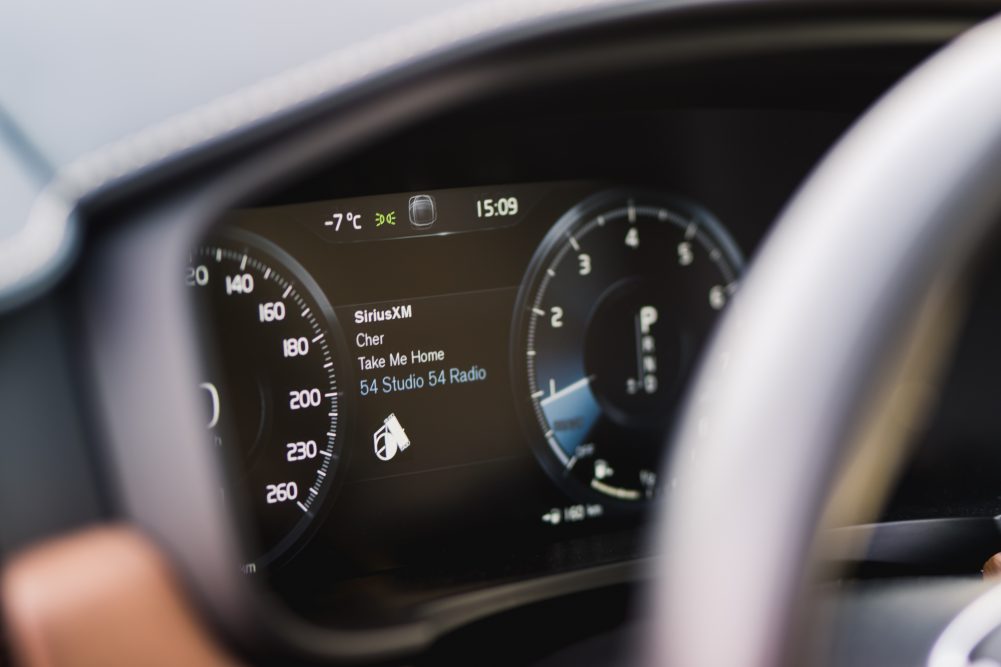 My final verdict on the 2017 Volvo S90 remains the same as with the XC90: this is an absolutely epic automobile. It’s a car that manages to carve out its own niche in the full battalion of available luxury sedans out there while remain true to its roots. The truth is, nothing really competes against this Volvo, because it’s simply a clean and different way of building a car – which is precisely what we expect from the Swedes and exciting news for upcoming Volvo products. The S90’s elegant design, both inside and out, classic Volvo virtues of comfort and safety, dynamic road-manners, and efficient drivetrains make it one of the best luxury sedans available today.

Now, if you’ll excuse me, I have some emails to send.

Review of the 2017 Volvo S90 Inscription by William Clavey