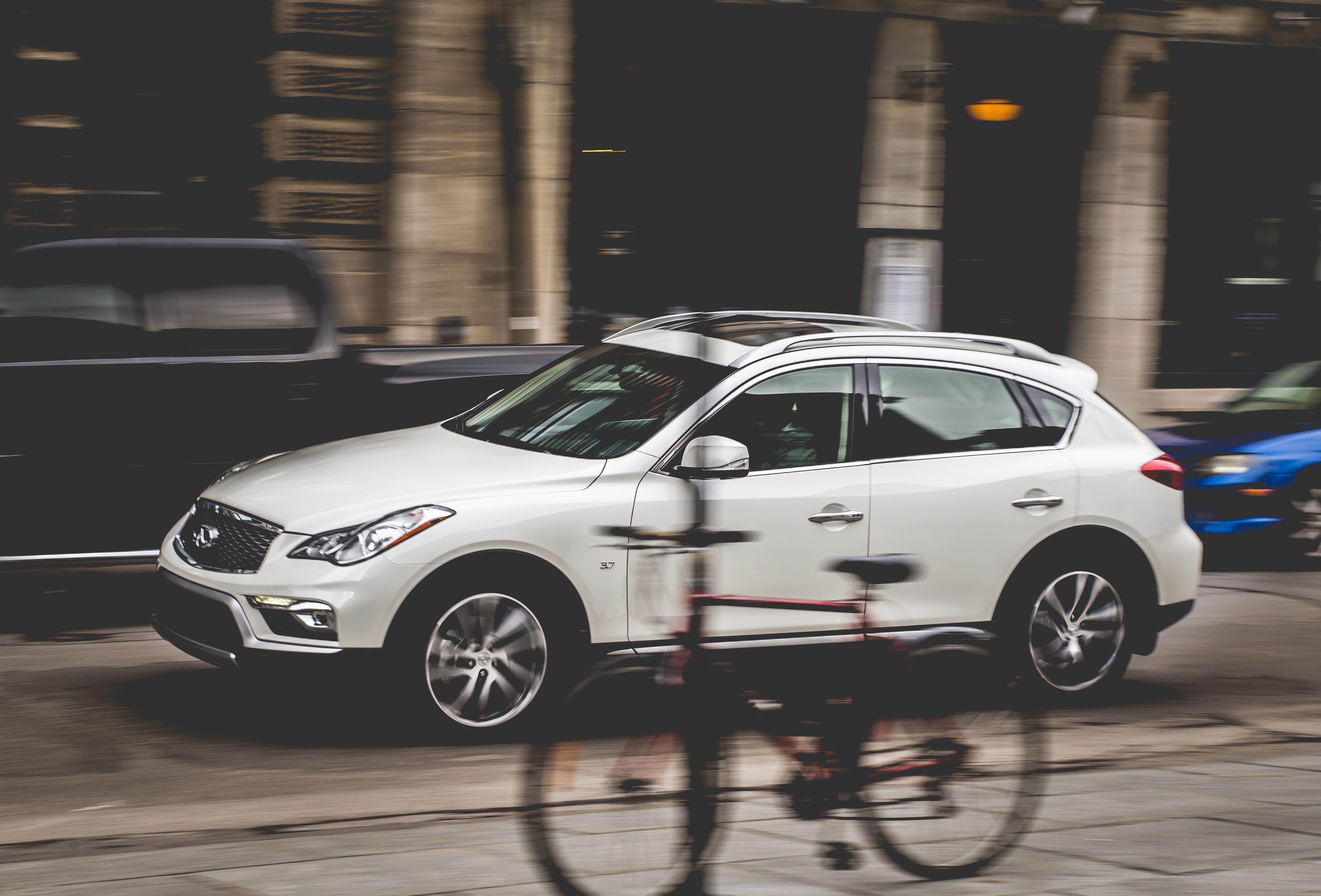 The Infiniti QX50 is essentially the new EX37, which was originally the EX35, which was basically a jacked up, wagon version of the exquisite G35 sedan.

And that’s a good thing.

You see, while the luxury compact crossover segment has since exploded from all over the place, with products such as Acura’s RDX and Lexus’ NX, Infiniti isn’t only reminding us that it created the segment with this vehicle, but that, unlike its competition, the QX50 is still built on a sports car platform.

The Backbone Of A Sports Car 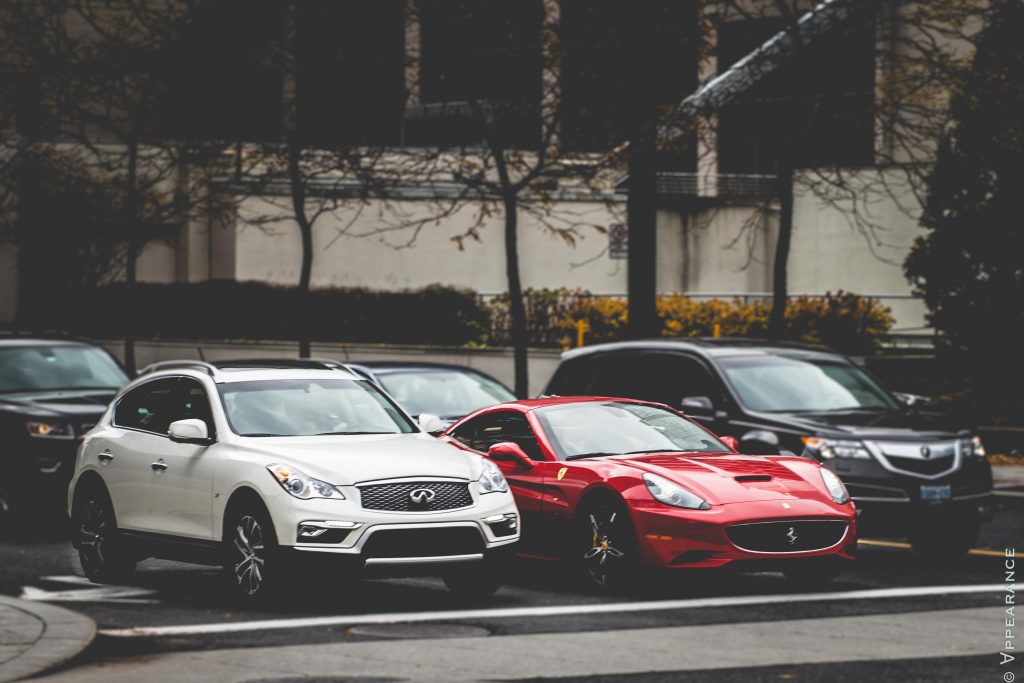 What I’m talking about is Nissan/Infiniti’s much revered FM platform, the front-engine, rear-wheel drive layout that’s been underpinning most Infinitis for the last 10 years or so.

It’s also the same platform as the Nissan 370Z.

Although some may argue that it’s an ageing setup, there’s no denying that the FM still appropriately gets the job done. The QX50 feels light, nimble, and exhibits rather athletic road manners, especially when driven hard. In fact, it encourages spirited driving. As cliché as it may seem, it puts the sport back in sport utility. 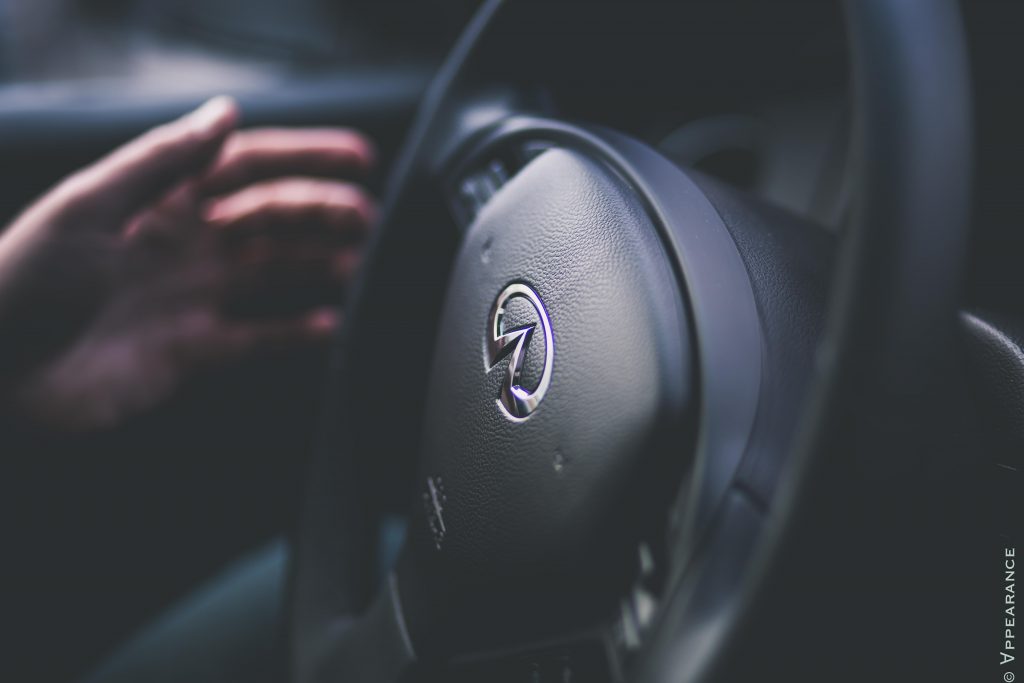 All QX50s (where do they find these nomenclatures?) sold in Canada come in AWD trim with Nissan’s superb and proven ATTESA-ETS torque vectoring all wheel drive system, the same system found in the GT-R super car.

Now those are some pretty compelling sports car credentials. 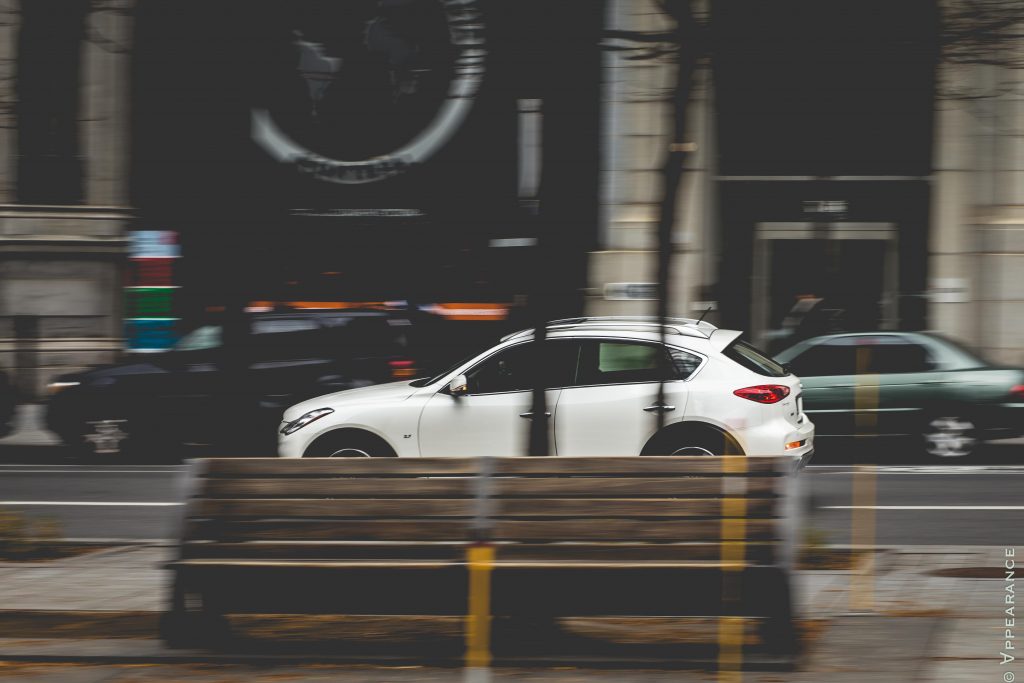 And while the trend in this segment is to stuff the vehicles with efficient turbocharged engines, electric torque vectoring all wheel drive systems, and dual clutch transmissions, the Infiniti makes due with conventional, almost rudimentary hardware. Power comes from a naturally aspirated V6, something that is, believe it or not, already becoming rare in this day and age. 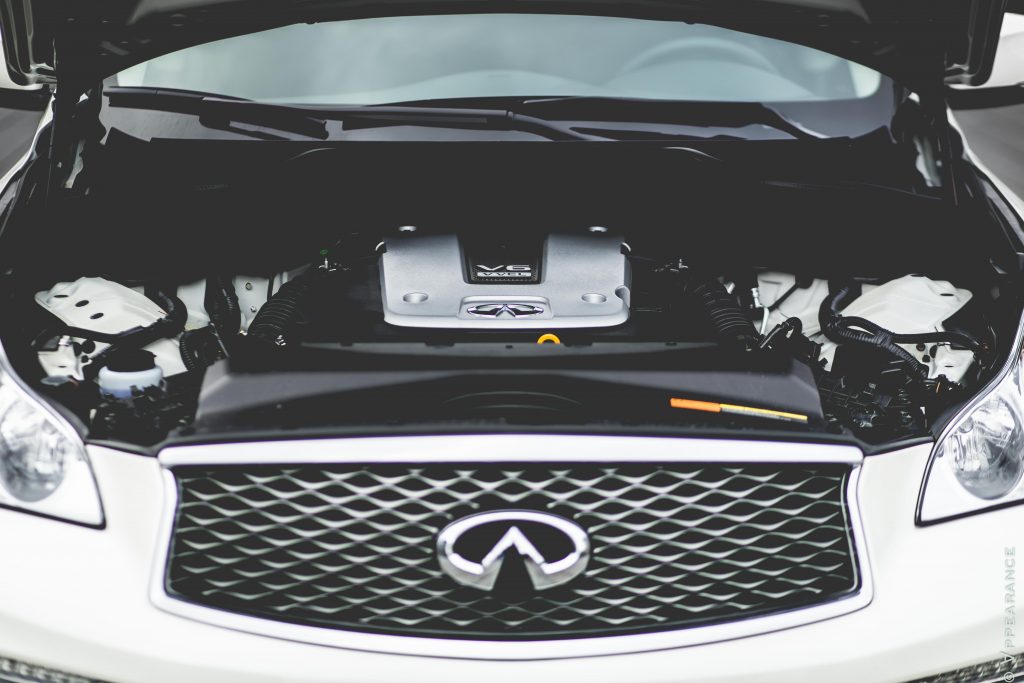 It’s an impressive engine though, the group’s much appreciated VQ-series 3.7 liter V6, the same engine found in the Z sports car and Q50 sports sedan. And even if it’s been on the market for nearly ten years now, it’s still respectfully competent and pumps out some impressive power figures: 325 horsepower and 267 lb-ft of torque.

Indeed, the QX50, albeit a heavy brute, pulls hard, accelerating from standstill to 100 km/h in a respectully swift 5.7 seconds. It also sounds gnarly while doing so. Not the most refined engine sound out there, but gnarly nevertheless. 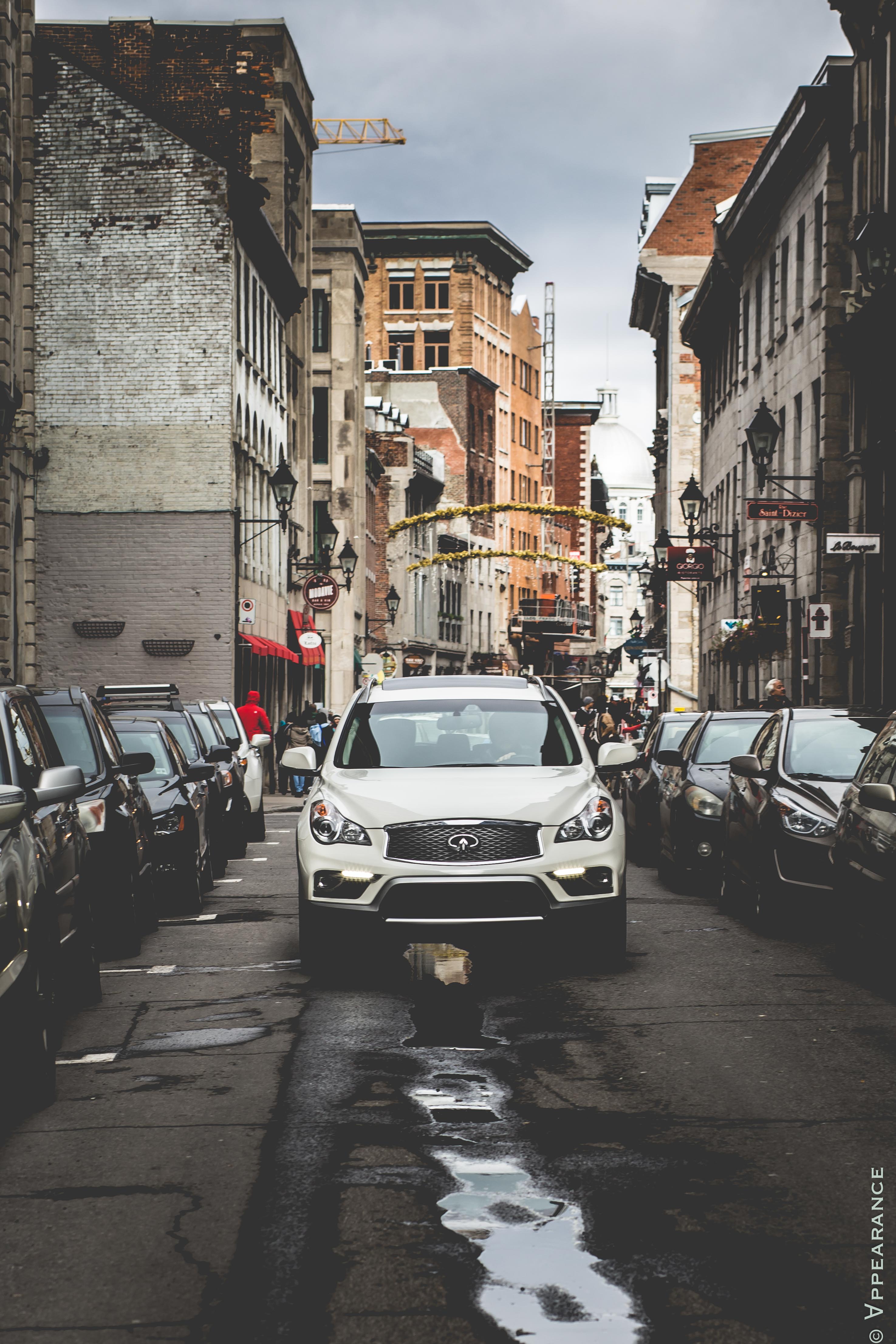 Unlike most of its competitors, which are built on FF (front engine-front wheel-drive) platforms, the QX50’s traction system is rear-wheel drive biased, which, when required, transfers the torque to the front, or from side to side through mechanical differentials. This further contributes to the vehicle’s sporty demeanor and, thanks to an engine mounted behind the front axle, gives the QX50 excellent, sports car style, weight distribution. 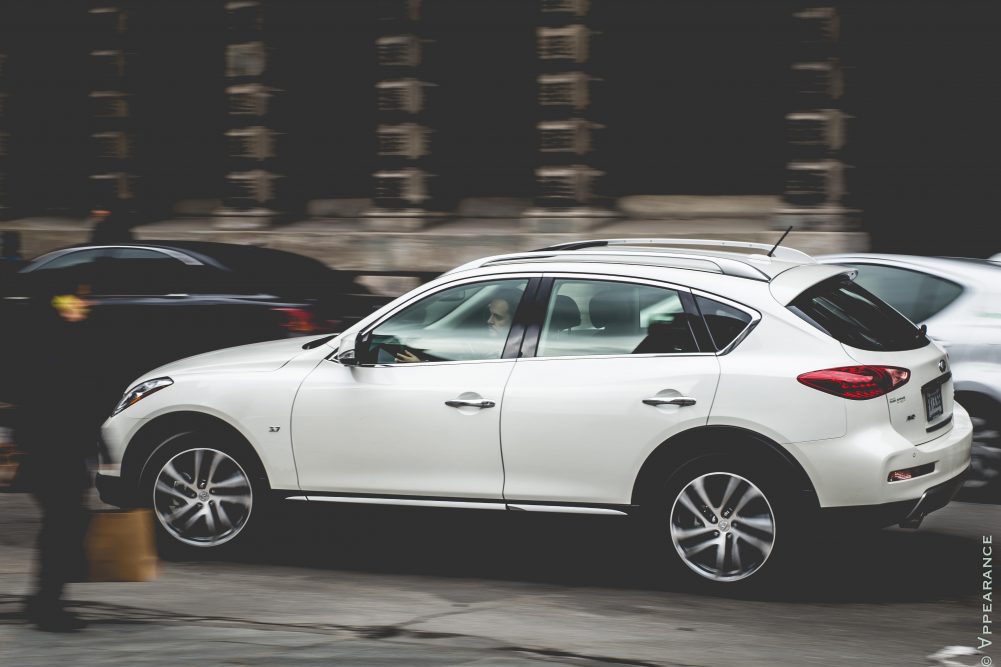 This means that when you enter a corner at higher speeds than you should, it’ll grip onto that tarmac with very little fuss, exhibiting surprisingly low body roll for a car of this height and weight.

I wish it had been snowing during my test drive. I’m sure the QX50 is even more impressive in slippery conditions.

All this traction is controlled via a 7-speed, automatic transmission with sport and manual modes, which, although sometimes hesitating to find the right gear, remains more effective when left to operate on its own in automatic mode. No paddle shifters, and no continuously variable or dual clutch system for that matter, which is odd, because Nissan builds excellent DCT and CVT transmissions. Ironically, the QX50’s charm lies in the fact that it’s an old school hooligan.

A Much Needed Stretch 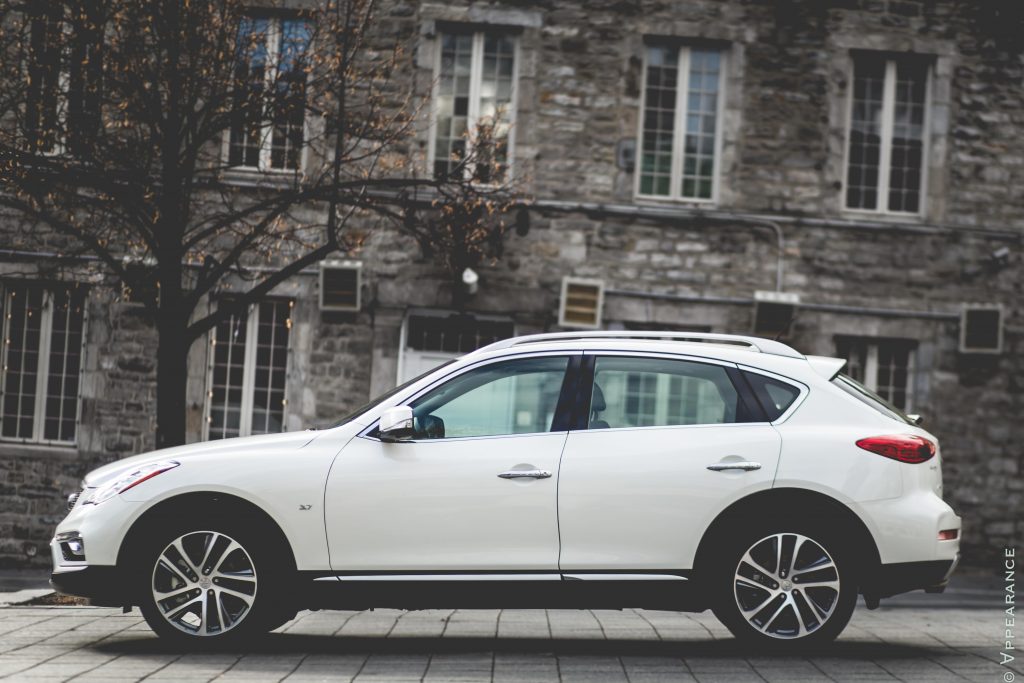 One of the EX’s biggest flaws was its lack of actual passenger and cargo space, with very tight rear leg room and little actual trunk space due to the way it was shaped.

For 2016, Infiniti engineers have addressed the solution by considerably stretching the wheelbase by 8 cm, resulting in a much roomier rear seating area with more than ample legroom. Unfortunately though, the QX50 still pays the price for its slopping roofline by having the smallest trunk in the segment.

I guess it’s the price to pay for favoring performance over utility. 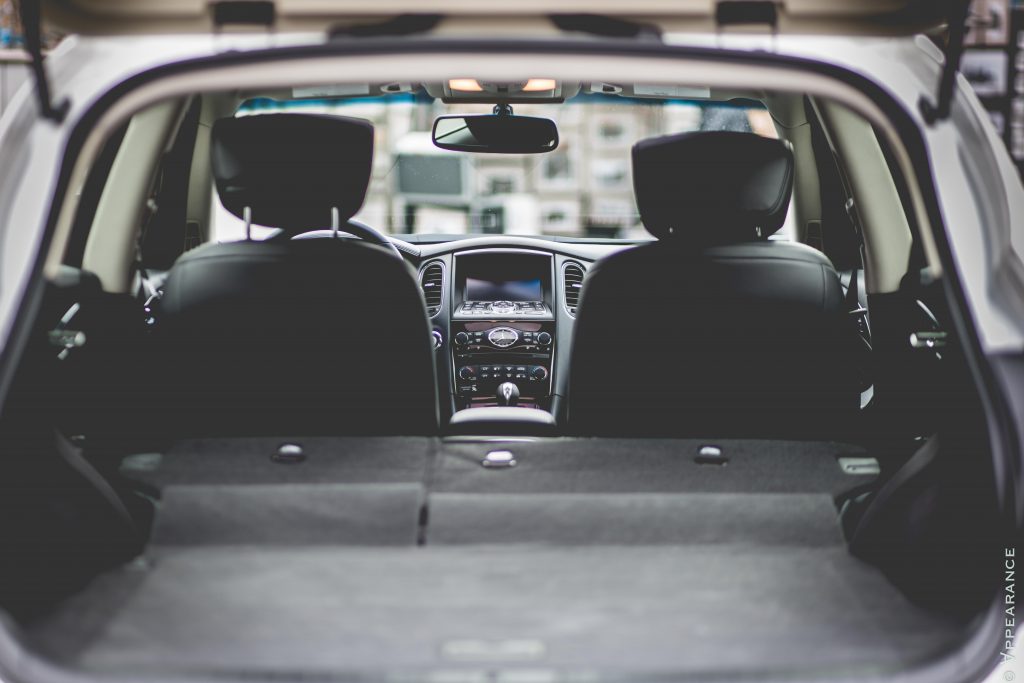 Inside, the QX50 pretty much carries over the EX’s interior rather than inheriting from the Q50’s new design language. As expected in an Infiniti product, fit and finish is superb, materials are of exquisite quality, and the leather seats are sumptuous, comfortable, and supportive. There’s leather everywhere, even on the dashboard.

No cheap plastics in this interior.

Except for the fake wood.

It never really actually feels like wood, it always looks and feels like a piece of plastic that was painted brown.

And they slapped it all over the interior. 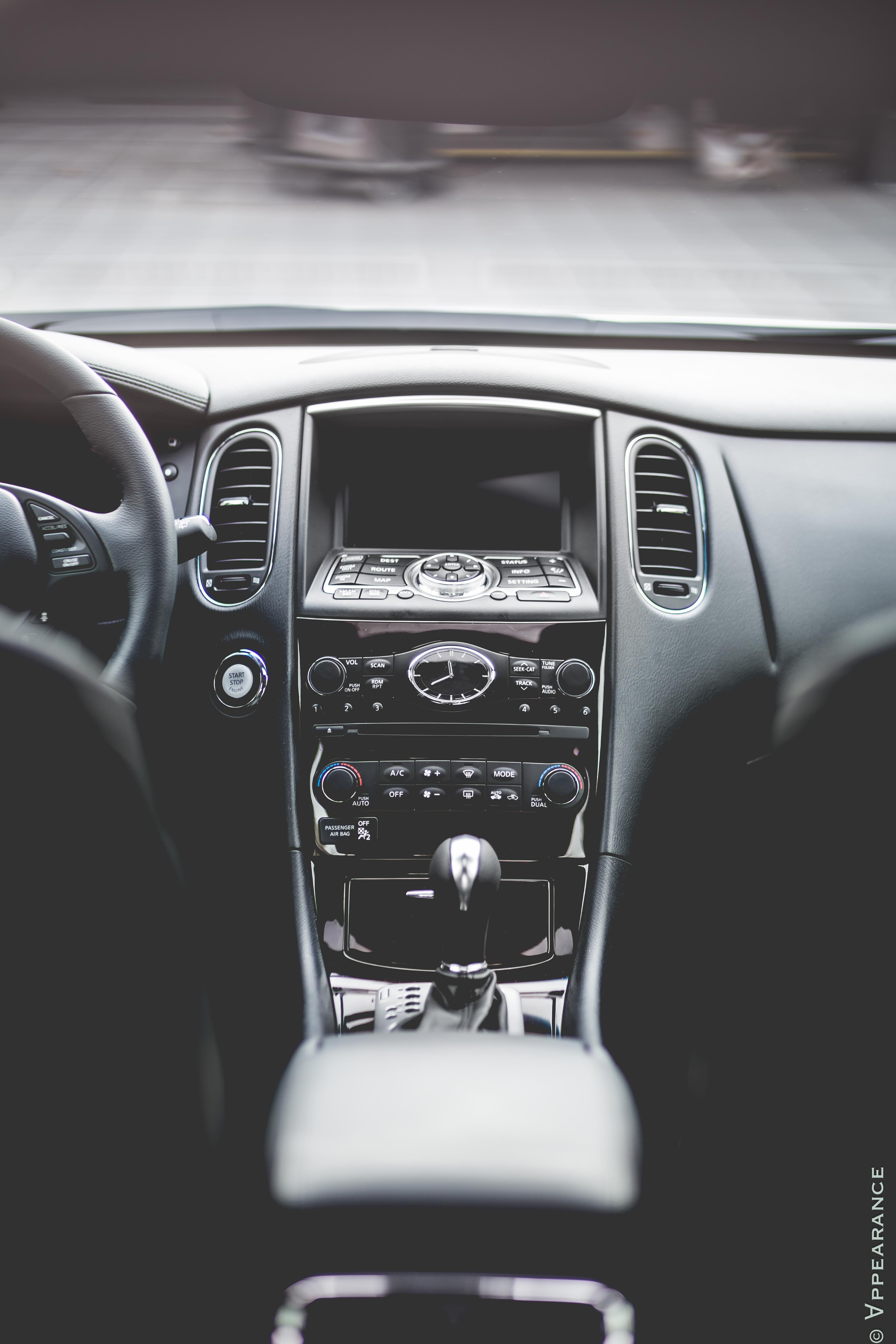 That’s kind of the sense you get when entering the QX50, it feels, well, old. Oh, don’t get me wrong, it remains a great place to be and a rather attractive interior. It’s luxurious, quiet, and filled with technology, but it still feels dated.

It feels like we’ve seen this interior before. 10 years ago. In a G35.

The QX50 could have benefitted from the Q50’s more youthful, modern, and attractive interior. 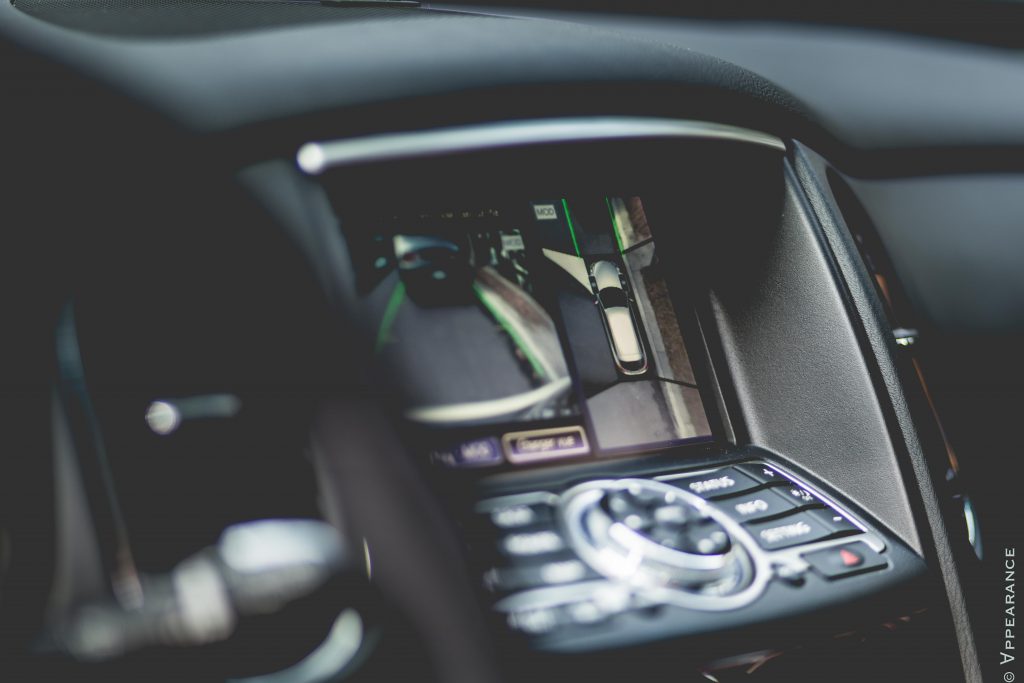 Same goes for the infotainment system, whose graphical user interface, with its low level graphics and mashup of buttons underneath it, feels somewhat “yesterday’s news” compared to some of the competition’s more entertaining and simplified displays.

Why doesn’t the QX50 get the Q50’s excellent touch screen setup?

Paradoxically, the QX50 showcases some significantly advanced technology. It comes available with all the latest electronic gizmos such as adaptive cruise control with lane departure warning, blind spot monitoring, collision avoidance, pedestrian proximity detection, a back up camera, and parking assist; a system that uses 3 cameras located around the car to assist the driver with parallel parking.

Should be a hit with the ladies.

As contradictory as the QX50 may seem, there’s no denying the fact that it comes with a lot of technology in its price range.

Still A Better Deal Than The Germans 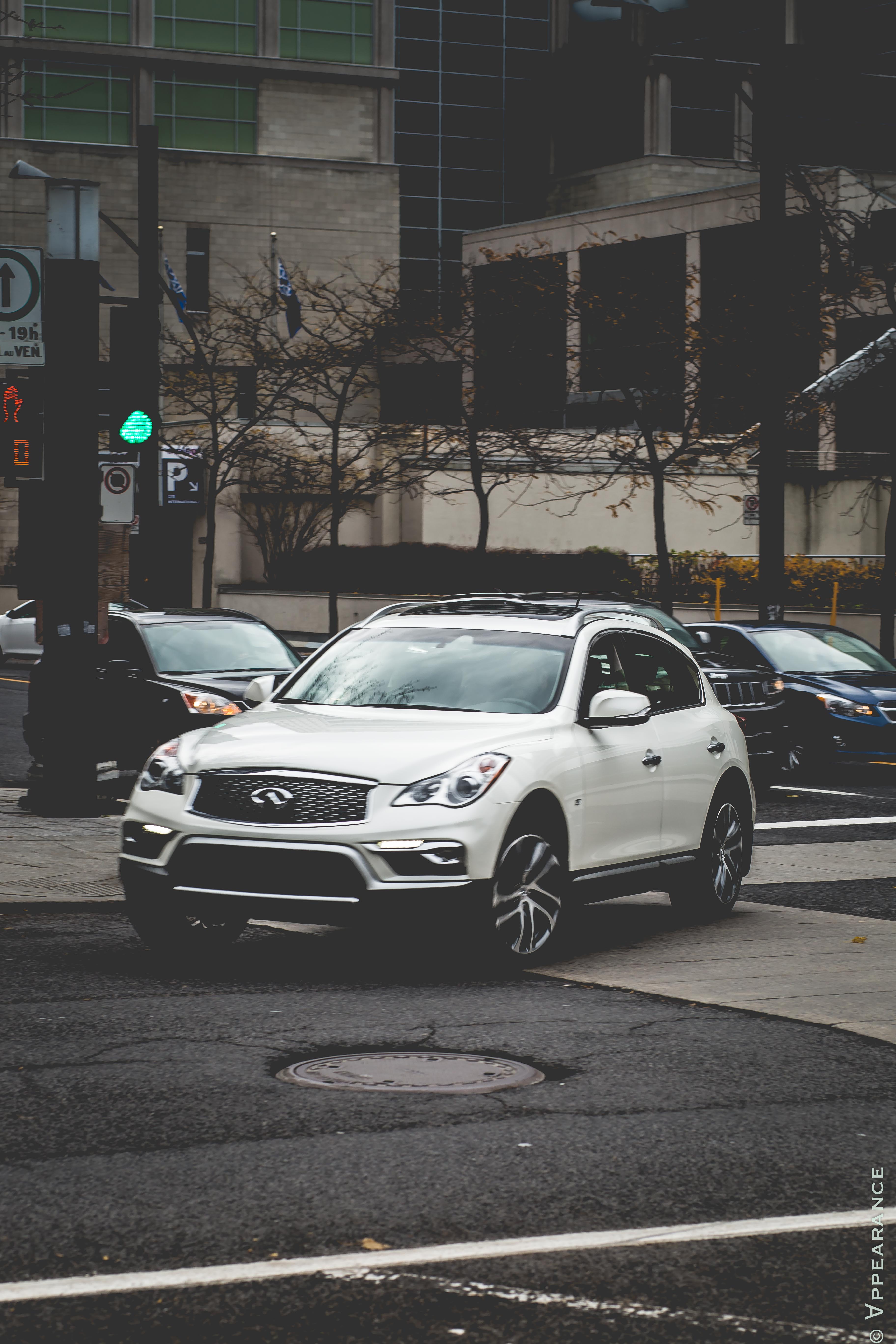 The Infiniti QX50 starts at $37,900 and tops at $49,895 when fitted with the three available accessory packages: Premium, Navigation, and Technology. My tester had all three packages which include the optional Bose 11-speaker sound system, navigation, Bluetooth audio streaming capabilities, and adaptive cruise control with lane departure warning.

Now consider the fact that its direct German competitor, the BMW X1, comes at an entry price of $38,800 with 100 less horsepower (yes 100), and the QX50 suddenly becomes a rather convincing argument. Equip a BMW X1 the same way as a fully loaded Infiniti and you’re well over $50,000. 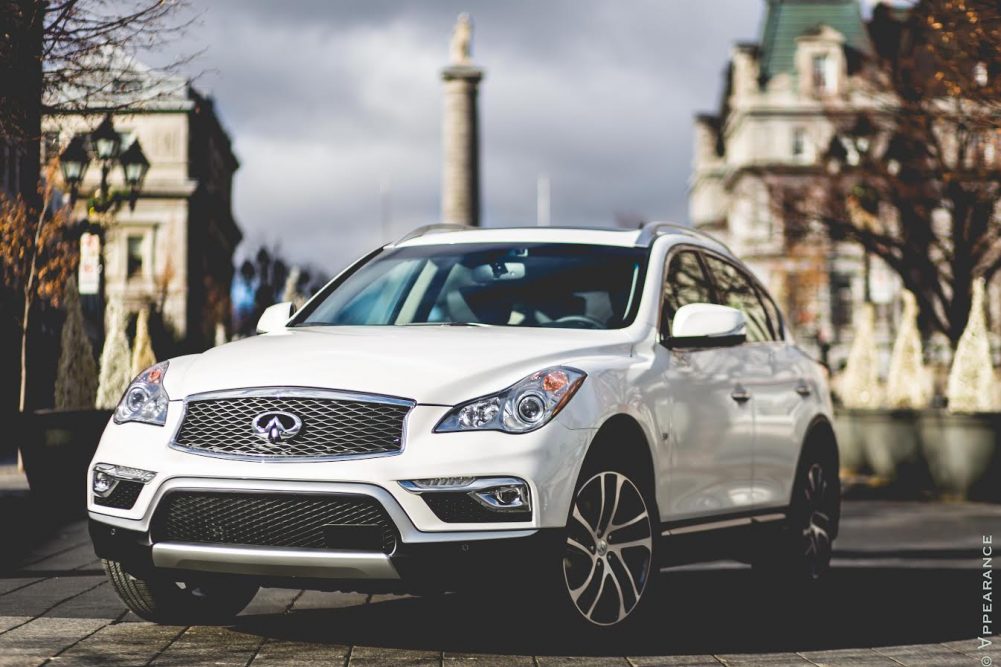 If you’re the kind of person who favors performance over utility, but still enjoys the practicality of a hatchback configuration and lifted platform, then the QX50 is certainly a product to consider. Lacking the refinement of the Germans but offering Porsche Macan performance for a fraction of the price, the Infiniti QX50 remains, without a doubt, a very competitive product.

Sadly though, it no longer defines the segment it created.

Review of the 2016 Infiniti QX50 by William Clavey