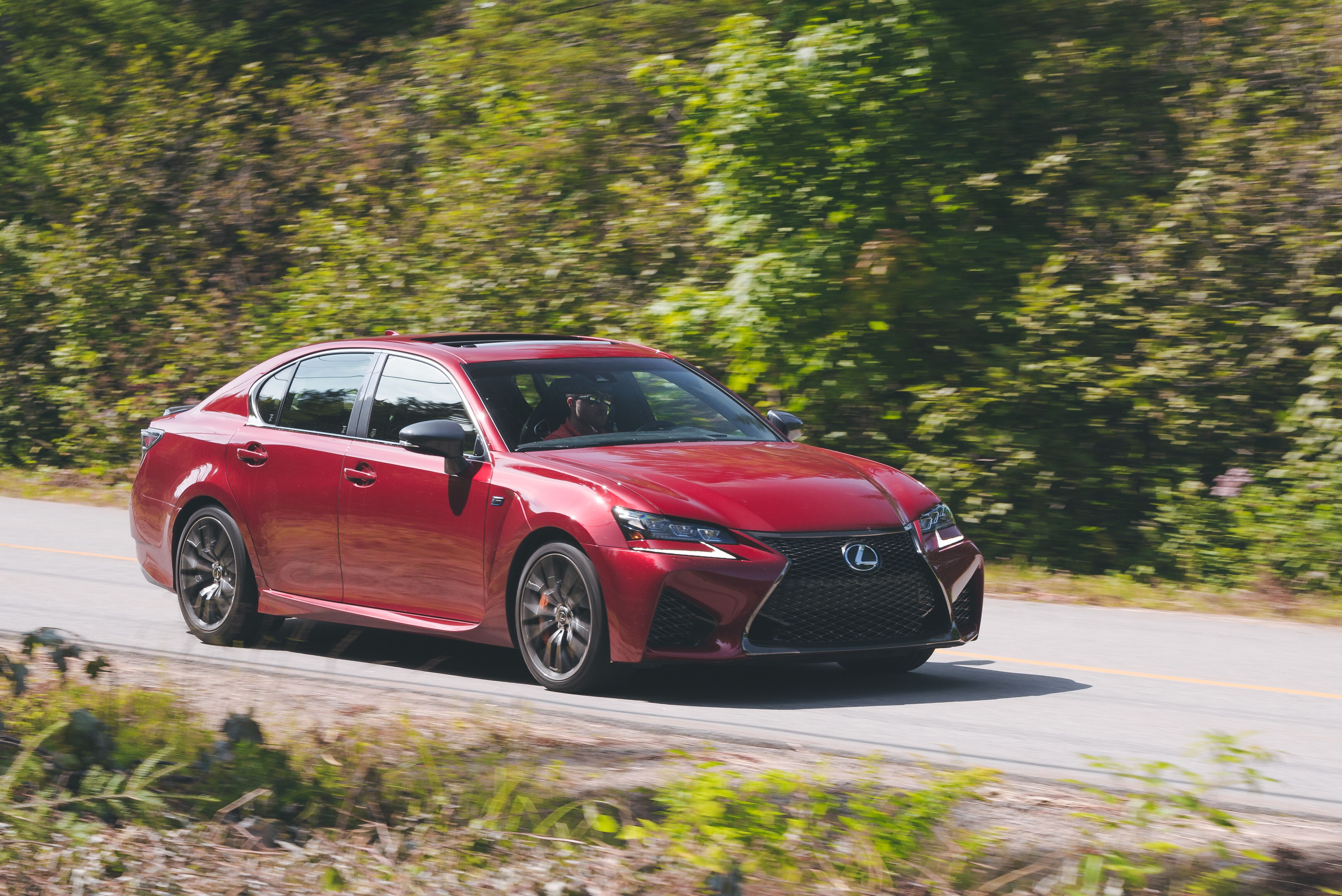 The 2017 Lexus GS-F sells for roughly the same price as a Cadillac CTS-V, but its naturally aspirated V8 pumps out 173 less horsepower. That’s the equivalent of an entire Honda Civic sitting between the two.

When comparing the Lexus to its more expensive, German competitors, the BMW M5, Mercedes-Benz AMG E-Class and Audi S6, it is the slowest of the bunch by a long margin. In the world of high performance midsize luxury sedans, power, acceleration, and lap times are king. So why on Earth would anyone buy the Lexus over the rest? 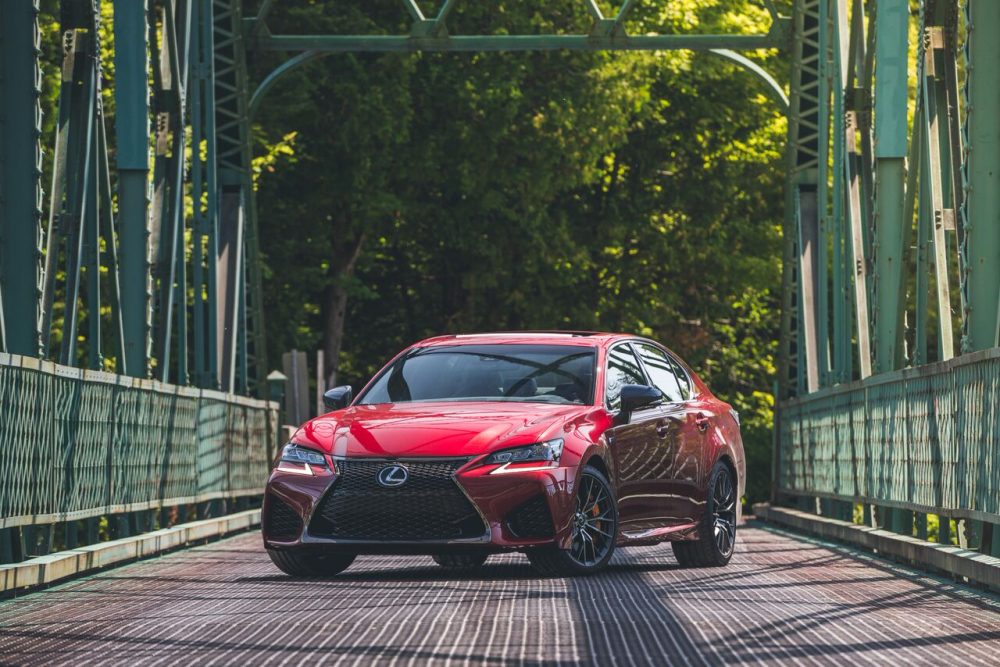 Because it’s different, that’s why. While Cadillac is content of following the traditional German formula of big power, big numbers and big lap times, Lexus focuses its latest hot-rod offering on balance, sophistication, and uniqueness instead.

Taking off from the already unusual GS sedan, the GS-F goes a step further in terms of out-of-this world styling by adding even more air intakes to its Predator snout, wider front fender flares adorned with evacuating air ducts, massive, six-piston brake calipers painted in – ahem – orange, 19-inch wheels and the classic Lexus muffler-on-top-of-another-muffler exhaust system, similar to what you get from other F-performance cars from the big L, notably the IS-F and RC-F. 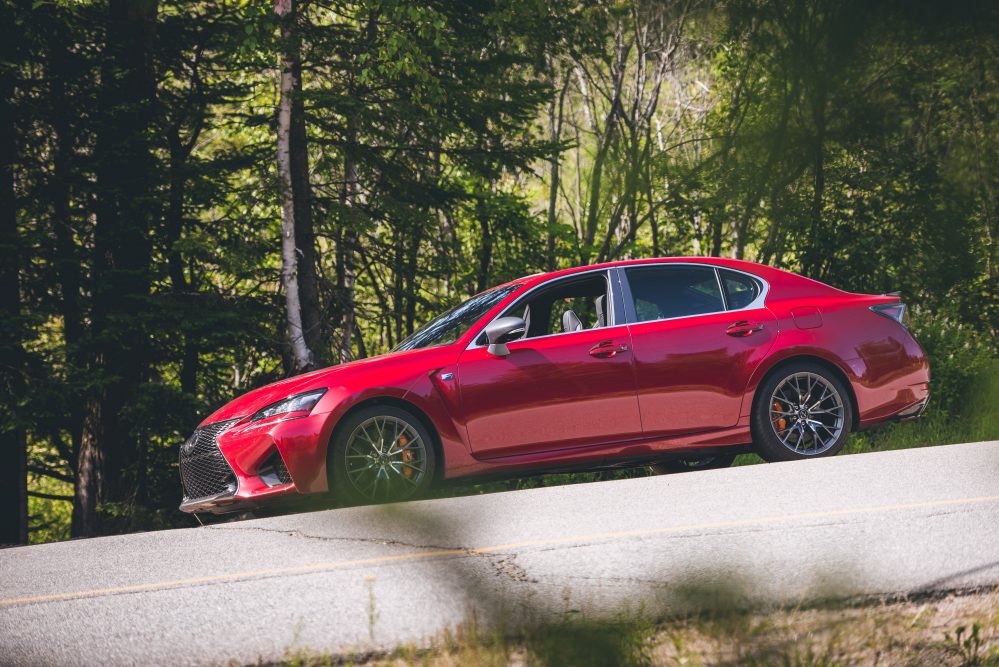 I wouldn’t call the GS-F an attractive car, but it is an intriguing one. It’s also the most unusual beast within the performance midsize sedan segment. Last year, Lexus Canada had painted its press car in bright orange, and it looked totally immature. But this one, covered in Metador Red Mica, almost looks like a big sleeper. And I quit like that. 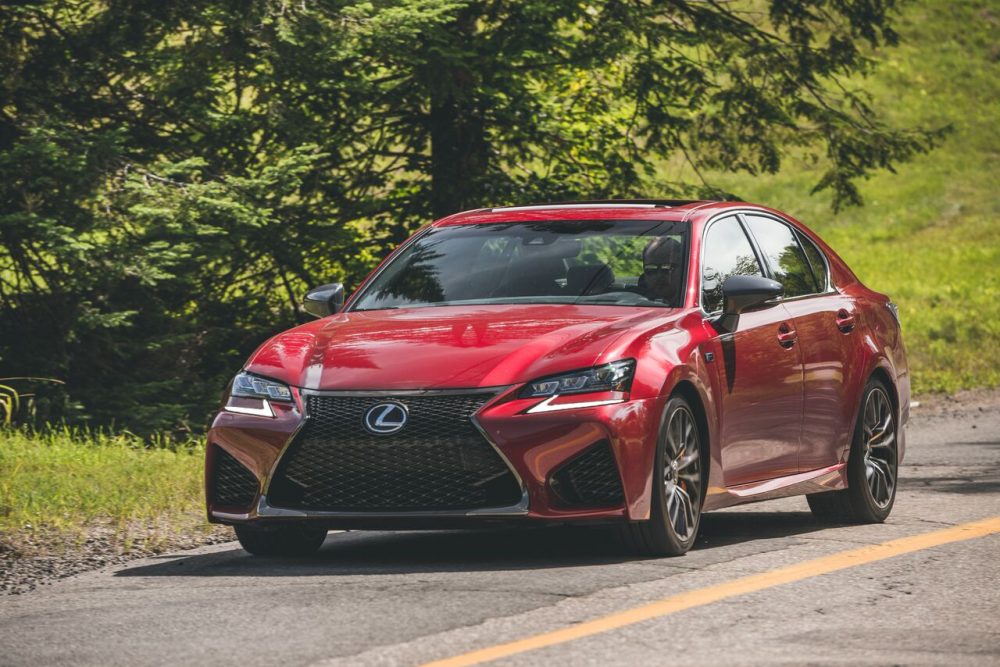 The GS-F isn’t just different from the outside. Its drivetrain is nothing short of unique, and, well rather archaic. While the competition has long shifted towards turbocharging, Lexus stays true to the good old high displacement formula. Under its hood sits a naturally aspirated V8. Nothing else. Power is rated at 467 horsepower and 389 lb-ft of torque. Or comparable to a BMW M5 from 15 years ago. But trust me, power ratings don’t tell the whole story here. 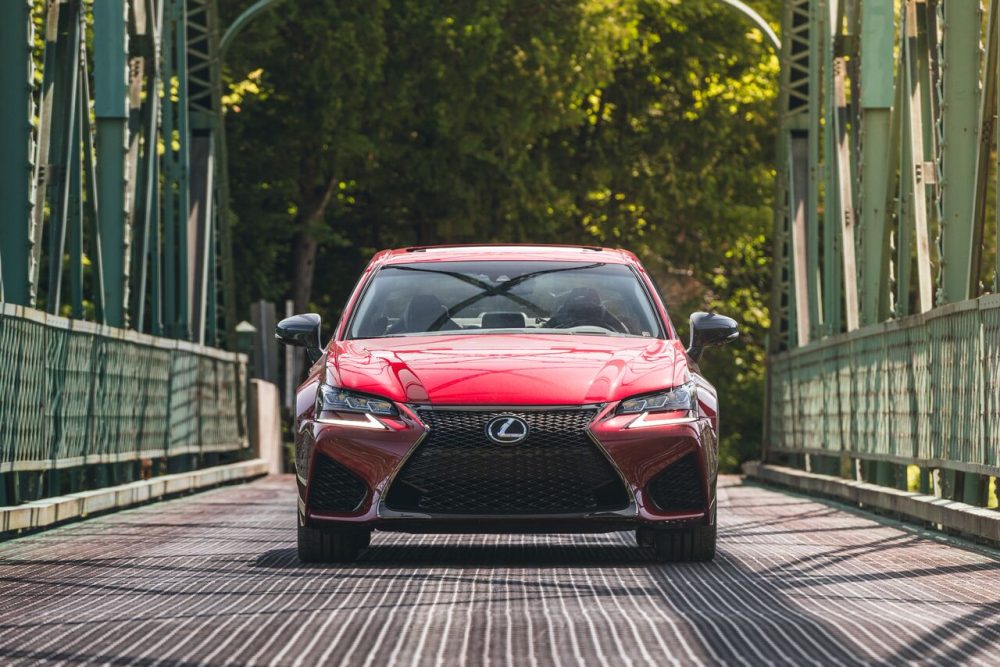 All that might is sent directly to the rear wheels. A trick, torque-vectoring differential takes care of making sure the GS-F gets its power down the proper way. The only available transmission is an eight-speed automatic, with manual shift modes. Lexus says its performance big boy sedan will launch to 100 km/h from a standstill in 4.4 seconds. 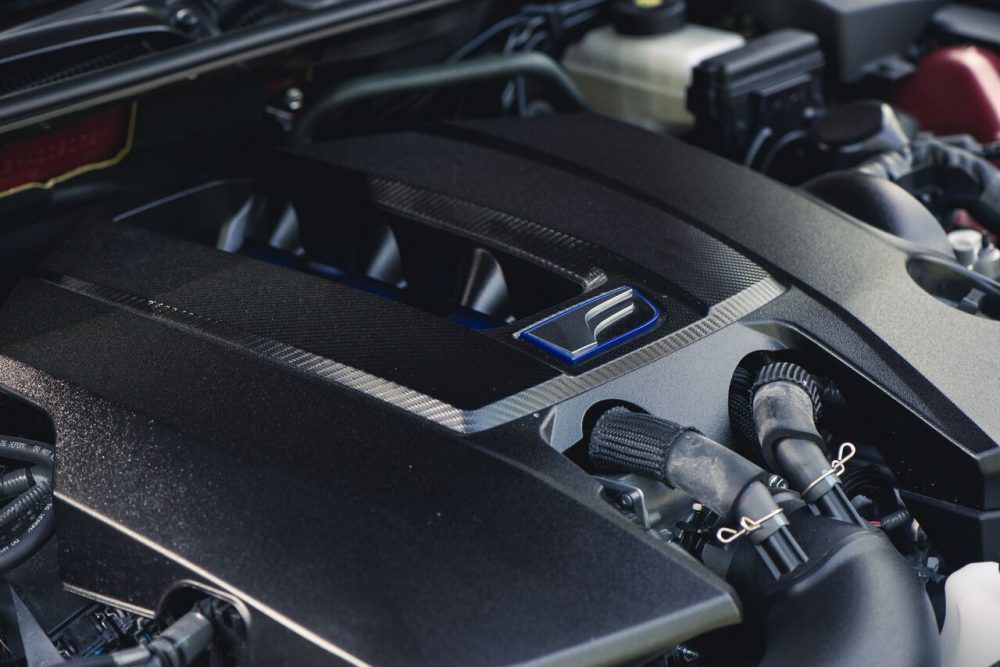 Is this car fast? When judged alone, yes, it’s quick. But only if you know how to drive it. During my time with the car, I had the opportunity to sample its various different drive modes: Eco, Normal, Sport and Sport +.  Actually, each mode and differential settings will split the difference between loving the GS-F, or downright hating it, because this car has a lot of different settings, and they’re not always great. 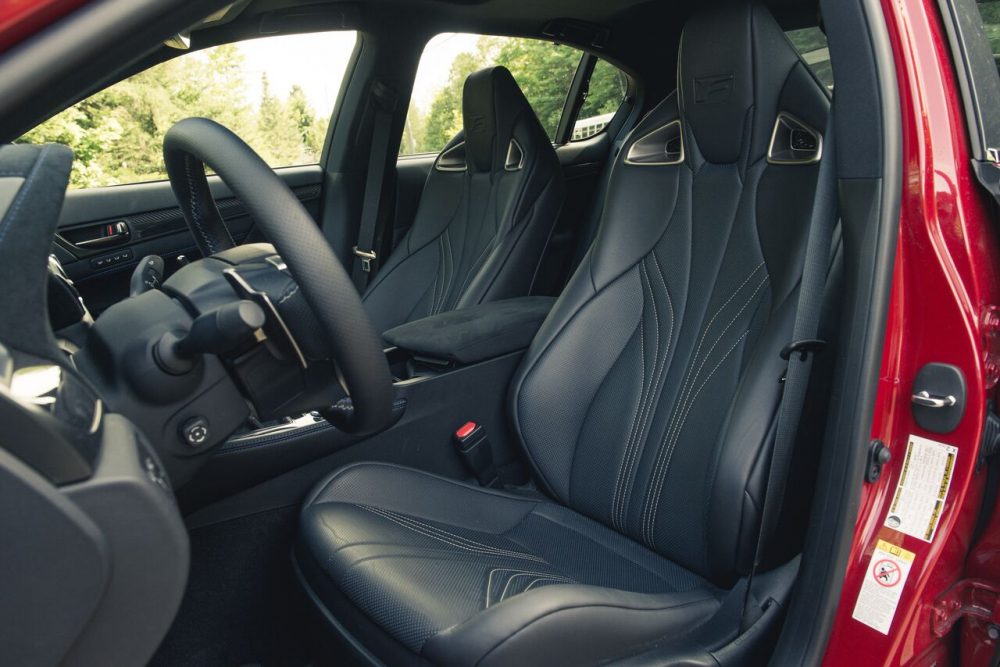 The beauty with the GS-F, is that it is, above all a Lexus. This means that not only is it a immensely quiet and comfortable car to spend some time in, its silky smooth engine, ultra precise steering and plush ride envelop you in a cocoon of ultra refined craftsmanship and luxury. Seriously, if this car doesn’t beat the Germans in lap times, it does in comfort. And those seats. Jesus. Those seats rock. 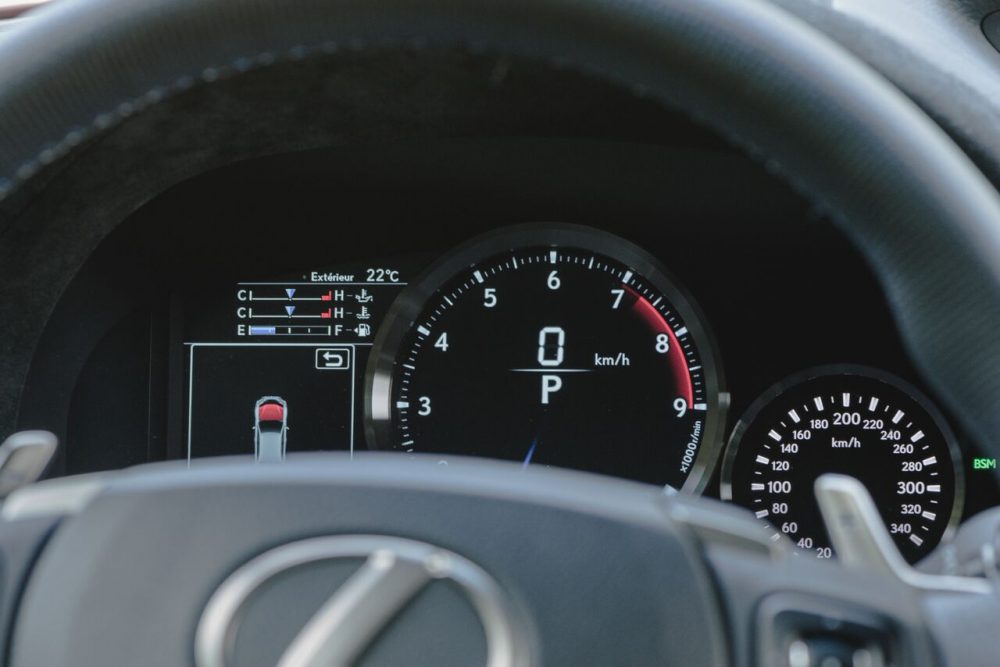 When I say the GS-F can be a pain, is that it really only has two modes: Normal and Sport +. Eco mode feels like a giant Camry, but with a broken throttle. Sport mode only gives half of the extra performance you’re looking for. And setting the diff to Slalom is downright useless in a car like this. I didn’t buy a drift car, I bought an executive performance sedan. Plus, I don’t even know how to drift. 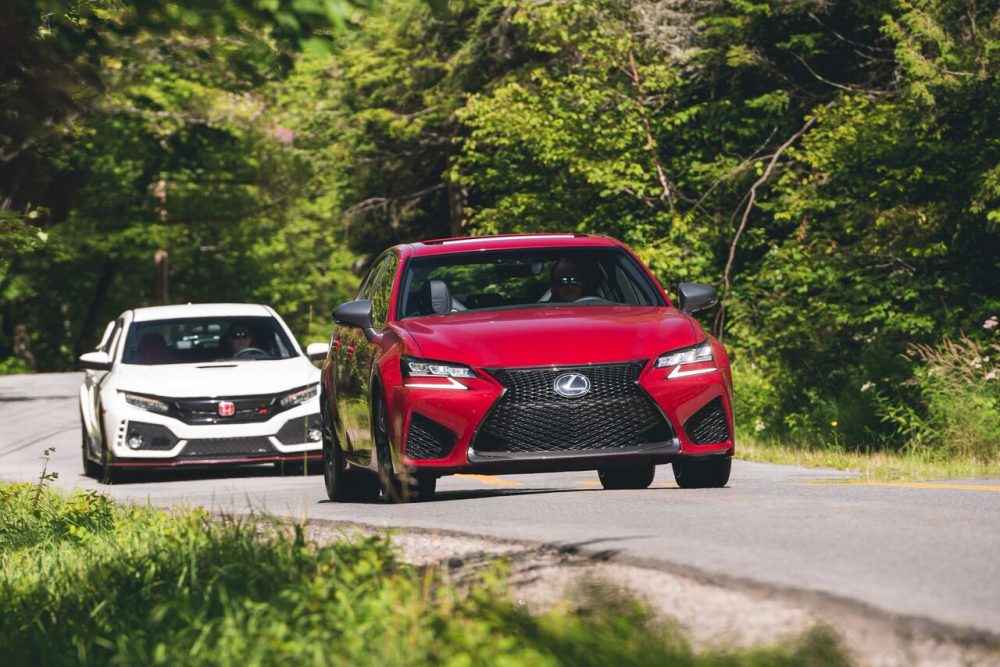 During the time I had my Gundam-inspired sedan, I had the opportunity to take it out on Laurentian winding roads alongside fellow automotive journalist Marc-André Gauthier. He was in the all new Honda Civic Type R, a car I will myself review here soon. We first set out for a casual ride in the mountains. It quickly turned into a solid dog fight. 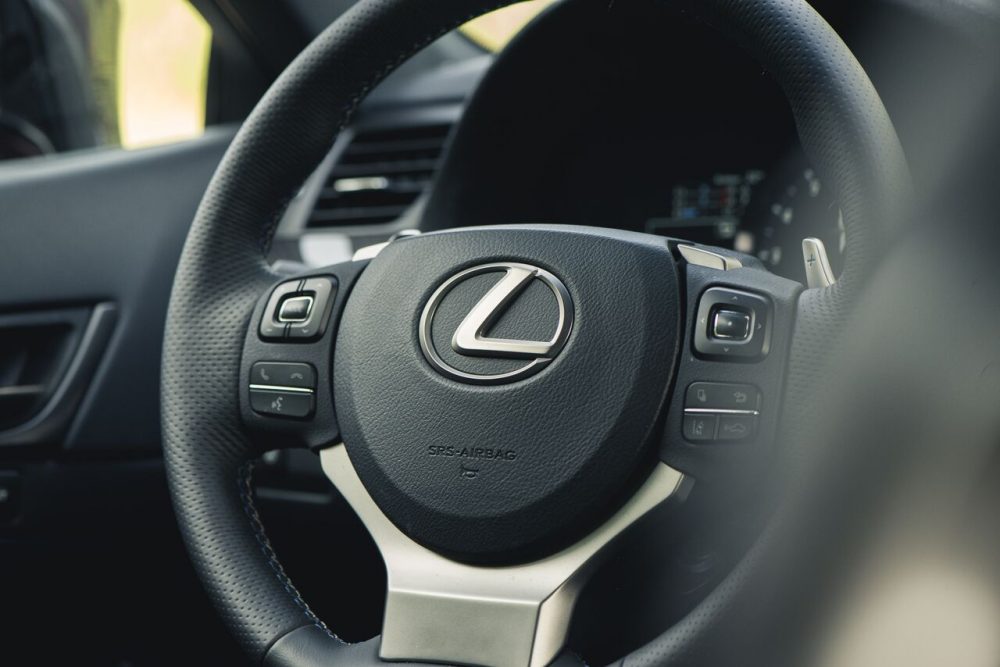 Set the big Lexus in Sport +, turn traction control off, and adjust its differential to Track, and the entire system activates Expert mode. That’s where the Lexus wakes up, and where it finally flexes its muscles. The 5.0-liter V8 loves the rev, and trumpets its way through a singular, and rather massive intake manifold. No fake engine noises here. Well, there are some, but they can be deleted.

And what a glorious, deep below of induction growl. These are the kind of engine sounds the rest of the industry spends hours programming through the speakers of its cars. Hit the 7,500 rpm rev limiter, and it’s all too buttersmooth. Pull the right paddle shifter for another gear, and the transmission shoves in the next cog, quickly, effortlessly, and efficiently. My only big complaint with it, is that the gears are too long, and it takes forever for the engine to really start pulling. And bark. 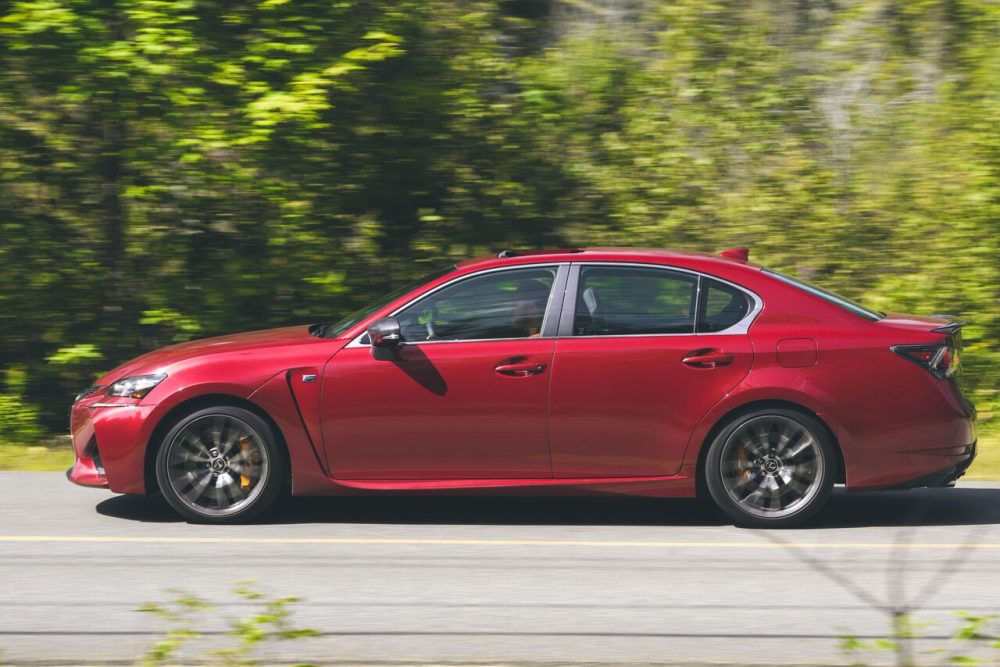 But it was the way this sedan could dance, following the nimble super hatch, that really left me stoked. The GS-F never feels heavy, nor too big to flog around. It’s tactile, nimble, and will let you turn in hard, slightly pushing out its wide rear end, executing precise powerslides, but never trying to scare you. Instead, it reassures you that it’s got things under control. What a machine. And what a properly quick car.

On the way back home, while my esteemed colleague broke his spine in his teenage dream Honda over Québec’s bumpy roads, I was basking in the Lexus’ immense comfort, and subtle ride, casually letting the automatic gearbox do its thing in the background. As far as executives sedans go, the GS is a hard one to beat.

Could Do A Bit More 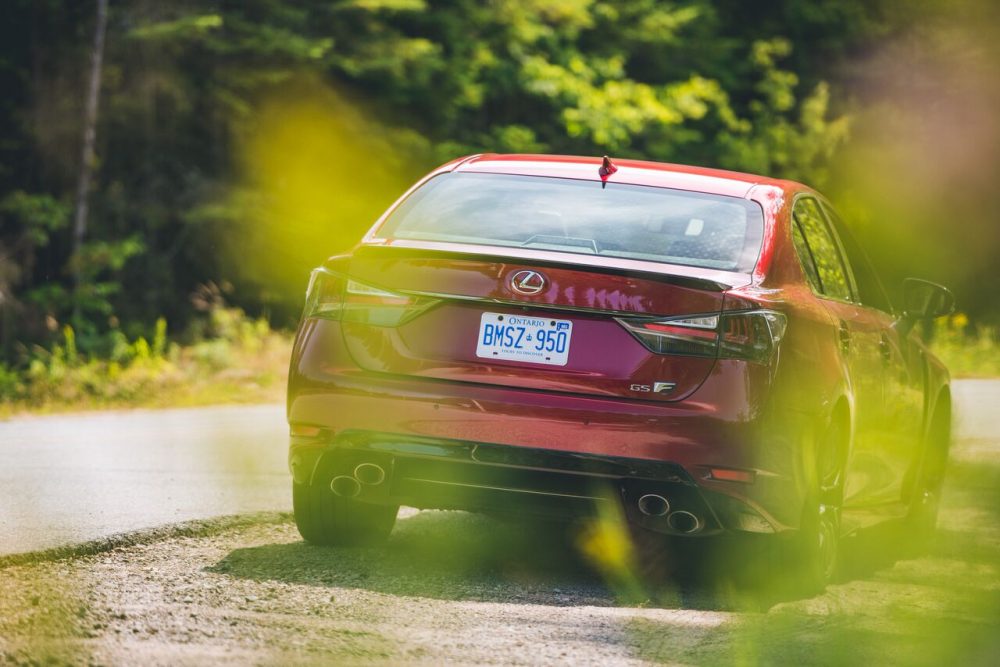 But although I adore the GS-F for its undeniable abilities to carve its way through a canyon road without a sweat, all while carrying your work colleagues out to lunch in absolute serenity, there are areas where the car downright got on my nerves. Although it may have a primitive engine under its hood, it’s an absolutely complex machine. Sure, the Germans are too, but does Lexus absolutely need to chase down that marketing strategy? Why so many settings for the differential? Why so many drive modes? Why not simply get one right and leave it as is?

And although I admire the originality of its interior, the layout of the controls are all over the place. Some buttons are even hidden way down behind the steering wheel. I only found them towards the end of my week with the car. 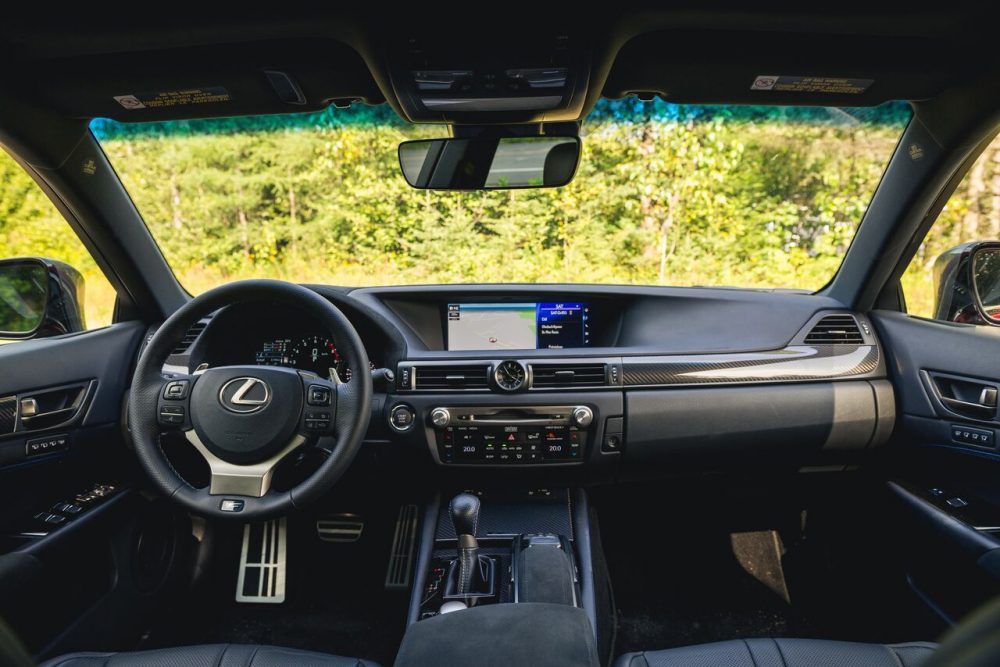 Other gripes went to its infuriatingly complicated and hard to use infotainment system. I’ve ranted about this in other Lexus cars. This one is among the worse, not because of its ridiculous joystick, but by its gigantic screen which can be split up into two sections and menus which require endless peel-off to get where you need to go. There’s also redundancy in the controls, further adding the frustrations associated with the system. 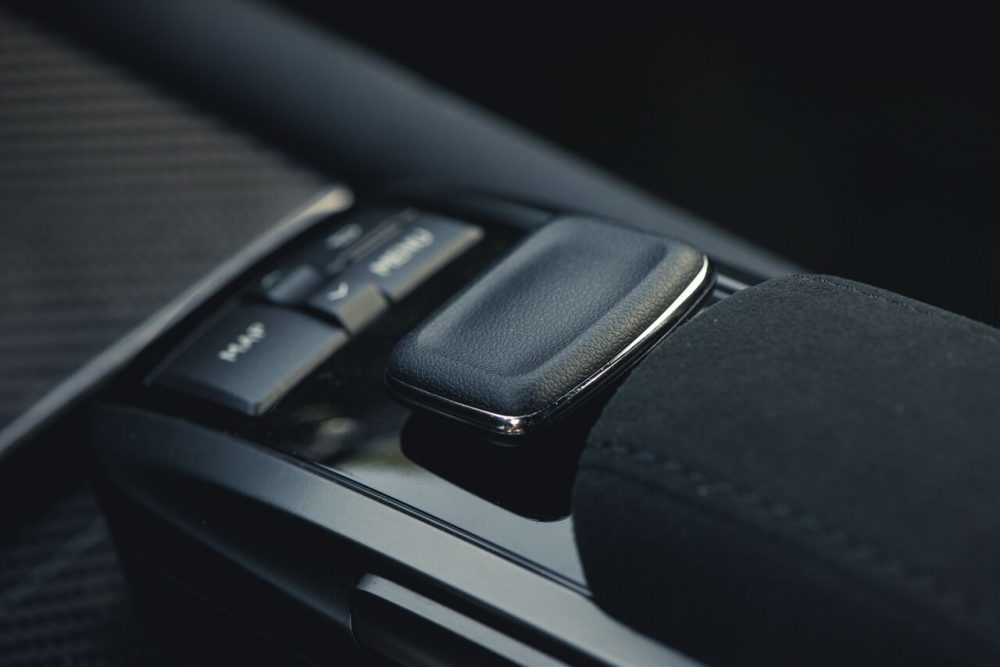 Now, I know I may sound like I’m contradicting myself here, and I know I said earlier that power doesn’t matter. But the GS-F doesn’t feel super fast behind the wheel. And that somewhat disappoints. I say this, because I took the car out to a local dragstrip, where an organized and supervised event was being held. I took the GS-F out for a few shots, and when you can hardly beat a Ford Focus RS on the quarter mile in your $100,000 sedan – yes, the GS-F sells for 100 grand – you tend to wonder where your money went. 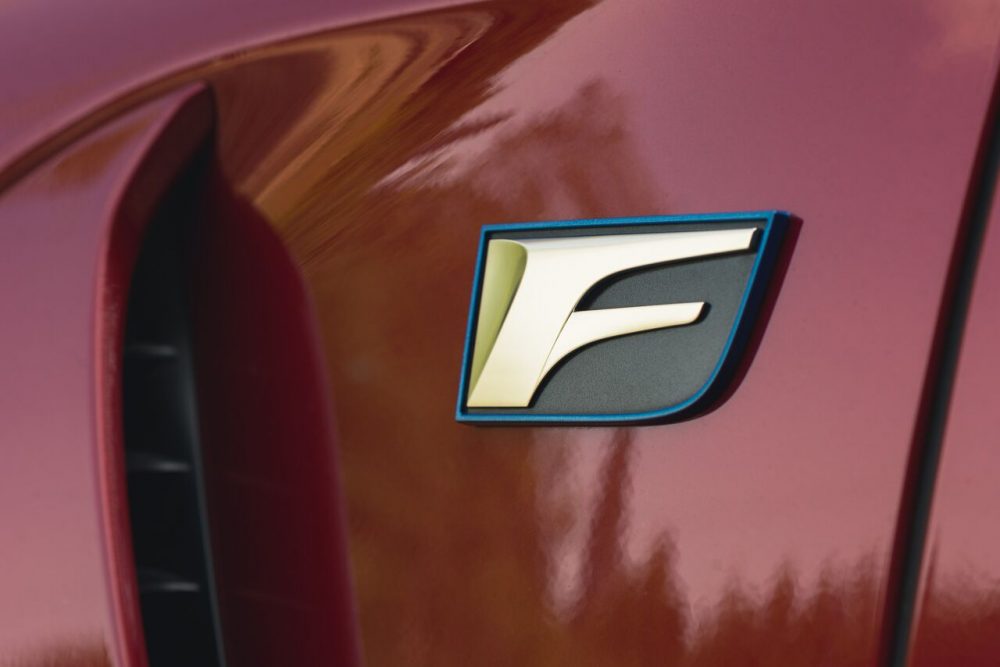 That said, I will say this: the 2017 Lexus GS-F may be outgunned by more established contenders, but it remains a stellar machine to drive hard, especially on a winding backroad, and in the duties of the every day world, there aren’t that many cars out there that will make you feel so unstressed behind the wheel. And remember, a Lexus doesn’t die. At least, that’s what the stats say.

The GS-F does kind of feel like an overpriced Camry at first, but there are very little Camry’s out there that will hunt down hot hatcbacks in the morning and pull giant powerslides in the evening. If uniqueness is your thing, the 2017 Lexus GS-F won’t let you down. As for me, I absolutely adore this car.