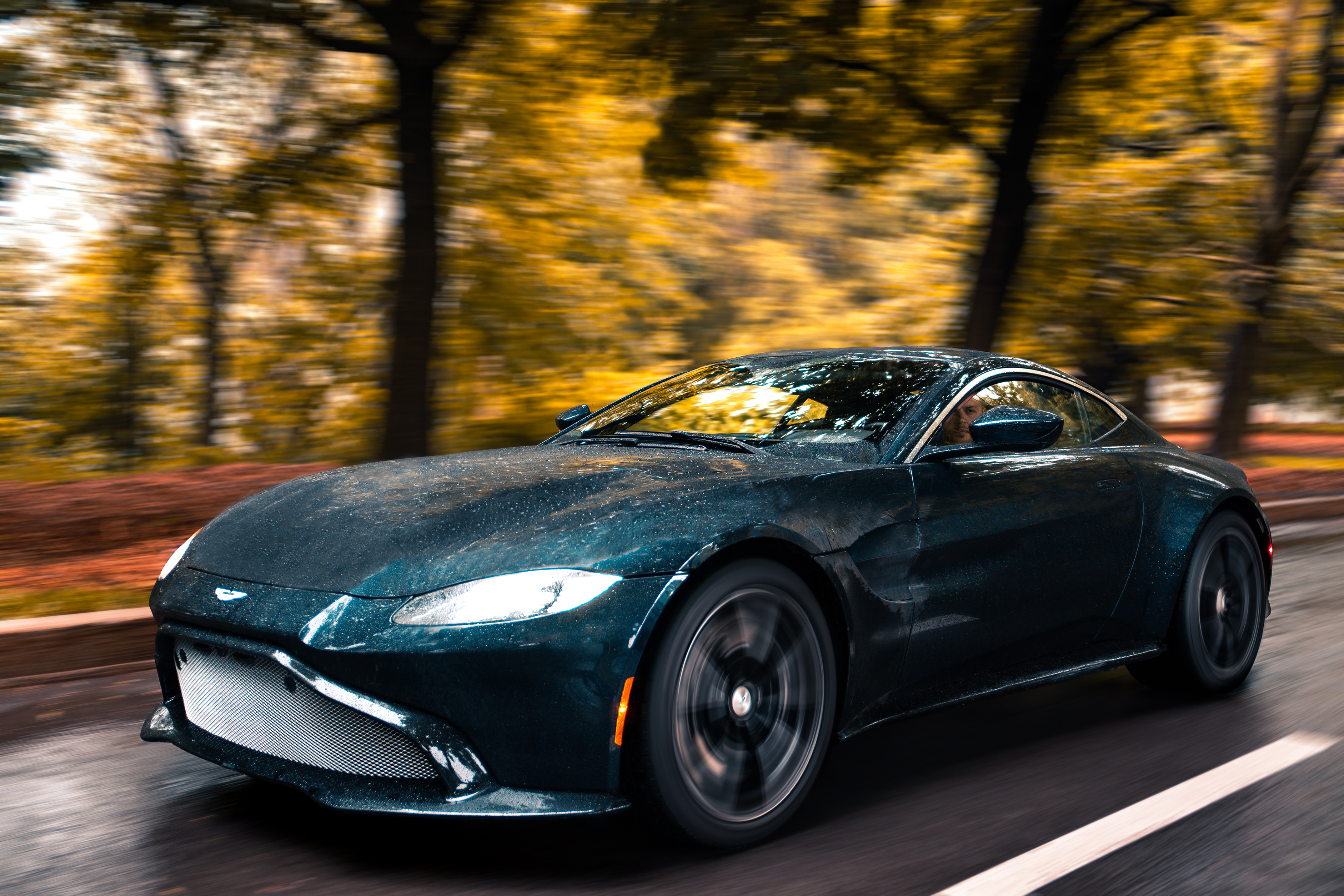 Up until recently, Aston Martin was the last, true British carmaker we had left. Sure, it once entertained a long relationship with Ford, but James Bond’s favorite car was still one of the last bastions of British engineering. I mean, think about it, except for perhaps Morgan, all the great English brands are no longer British. Jaguar Land Rover now belongs to India, MINI is now more German than the Autobahn, and Bentley has been Volkswagen’d to the moon and back. And don’t get me started on Rolls-Royce. Those cars are BMW’s now.

I regret to inform you folks that yet another iconic British carmaker has been eaten up by the Germans. Yes, the car you see here, the 2019 Aston Martin Vantage, has more in common with a Mercedes-AMG GT. At least, it’s drivetrain does. But you know what? It ain’t all that bad, actually. As a matter of fact, this may very well be the best Aston Martin to have ever rolled out of Gaydon. In England.

A Beacon For An Entire Brand 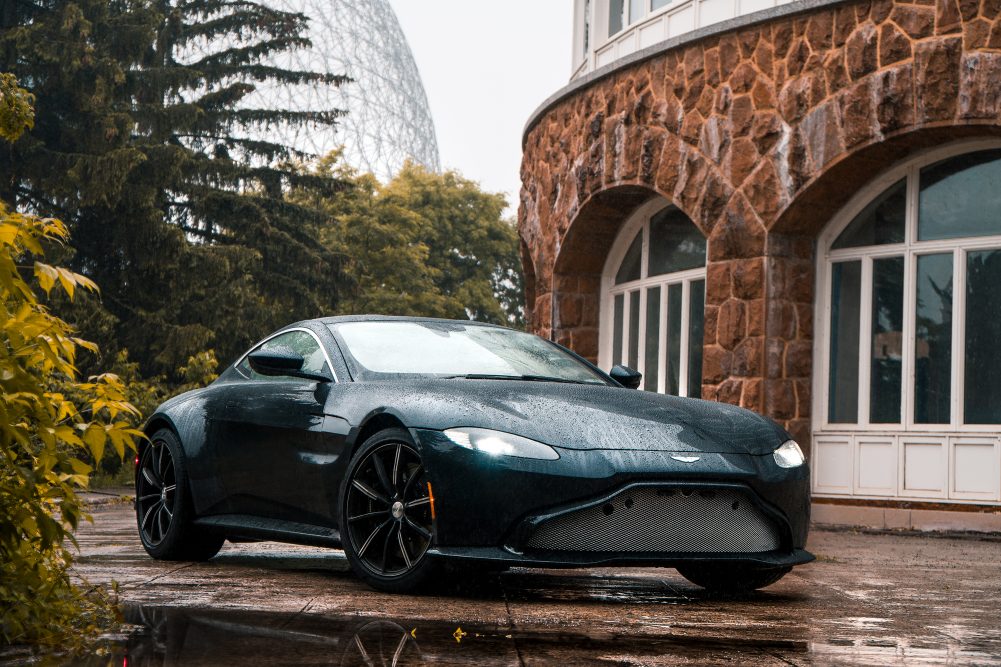 Aston Martin’s been going through resurgence in the last couple of years. It all began with a new boss, Andy Palmer, the man who was formerly at Nissan as Executive Vice-President and Member of the Executive Committee. He joined Aston in 2014 with a one-two-three punch of new equity, a solid expansion plan, and strict cost reduction protocols. His goal was to launch one new model at least every year and ensure that all Aston Martins continued to be built in England. He also secured a partnership with Mercedes-AMG and solidified an alliance with Redbull Racing in Formula 1. Finally, he elected Laura Schwab, who came in from Land Rover, to run the North American division.

And it all led to stunning machines. We first had the DB11, the brand’s re-imagined flagship, V12-powered, grand-tourer. I drove that one for Jalopnik, you can check it out here. Then, we had the Valkyrie, a hyper-car concept that’s still in development as I’m writing this, but blew the world away by its stunning futuristic design. And this year, we got this, the Vantage, the brand’s most “affordable” sports car, its track beast, or as I like to call it, Aston’s Porsche 911 fighter. 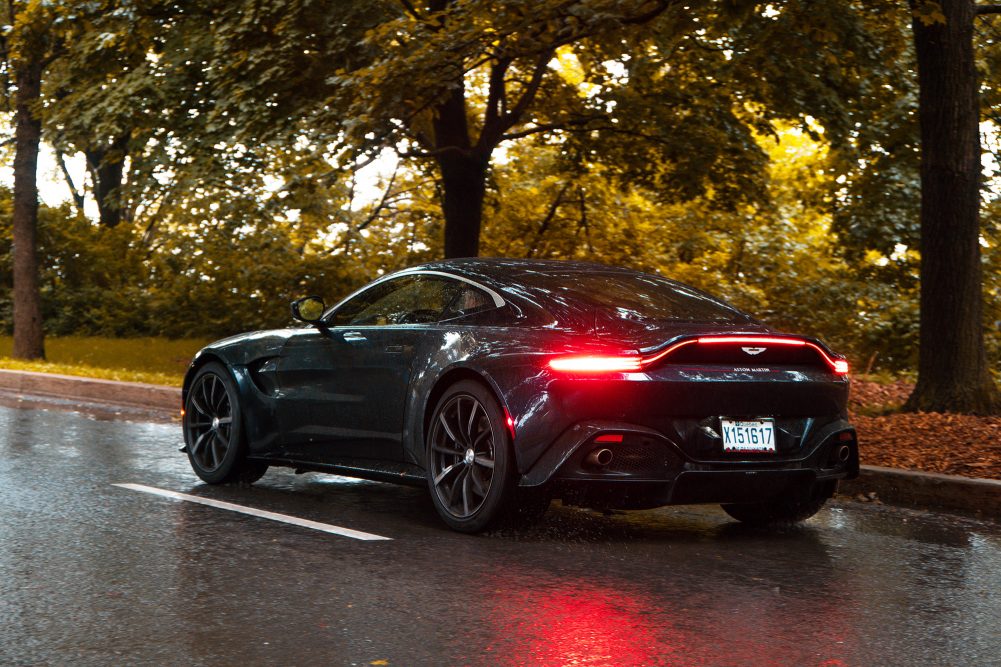 Entirely re-engineered for 2019 by way of all-new aluminium structure that’s 30% stiffer than its predecessor, the new Vantage sets itself apart from its German, Italian and American competition through a fluid, simplistic and futuristic design language. Aston Martin believes that each model within its lineup must have its own bespoke styling; this is why the Vantage doesn’t look all that similar to the DB11, yet, it still retains the classic Aston cues. There’s the iconic front grille maw, which now seems to dominate the front fascia from how wide it’s become. The headlights are thinner, seemingly squinting, and the entire car sits low, wide, and short, appearing to slip through the air.

Of course, the instantly recognizable Aston Martin hips protrude on each side, and it all tapers off into a clean, sporty and modern rear end adorned with an enormous diffuser and a slim, continuous, LED taillight. This car looks badass.

It’s Got A Great Sense Of Humor 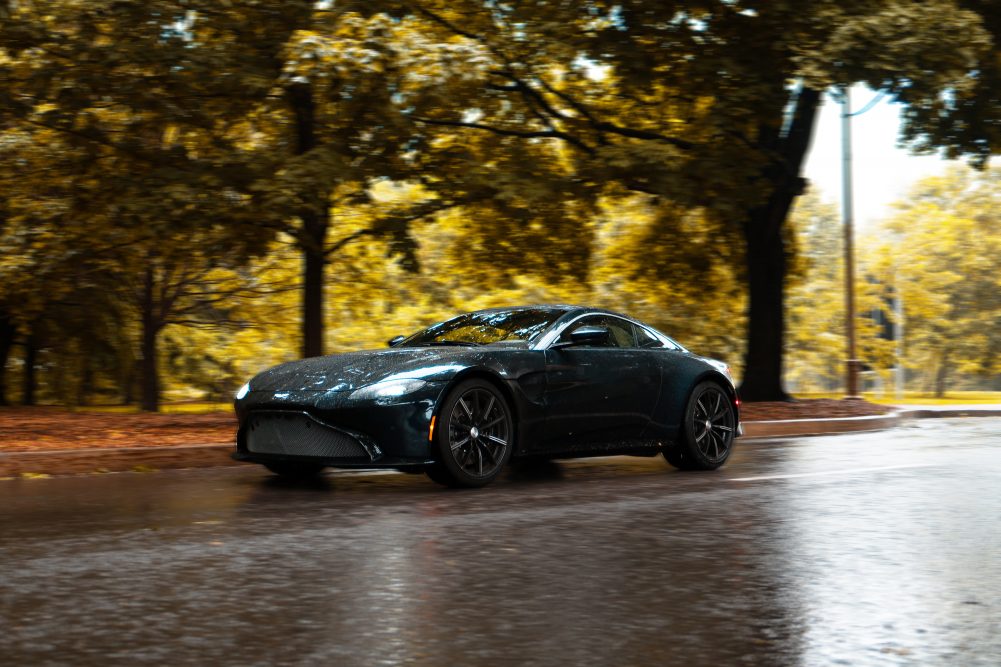 My time with the Vantage was brief, as it’s typically the case with supercar press units. It was also raining hard, but I did have it long enough to sample the car’s new chassis, adjustable suspension, and drivetrain.

When I say it has more in common with an AMG GT, it’s because its engine and transmission were taken directly out of that car. It’s a gem of an engine, a twin-turbo, 4.0-liter V8 good for a more than sufficient 503 horsepower and 505 lb-ft of torque. It’s mated to an eight-speed, ZF-sourced transaxle automatic gearbox that sends power to the rear wheels. Aston Martin claims 0-100 km/h is achieved in roughly 3.5 seconds. 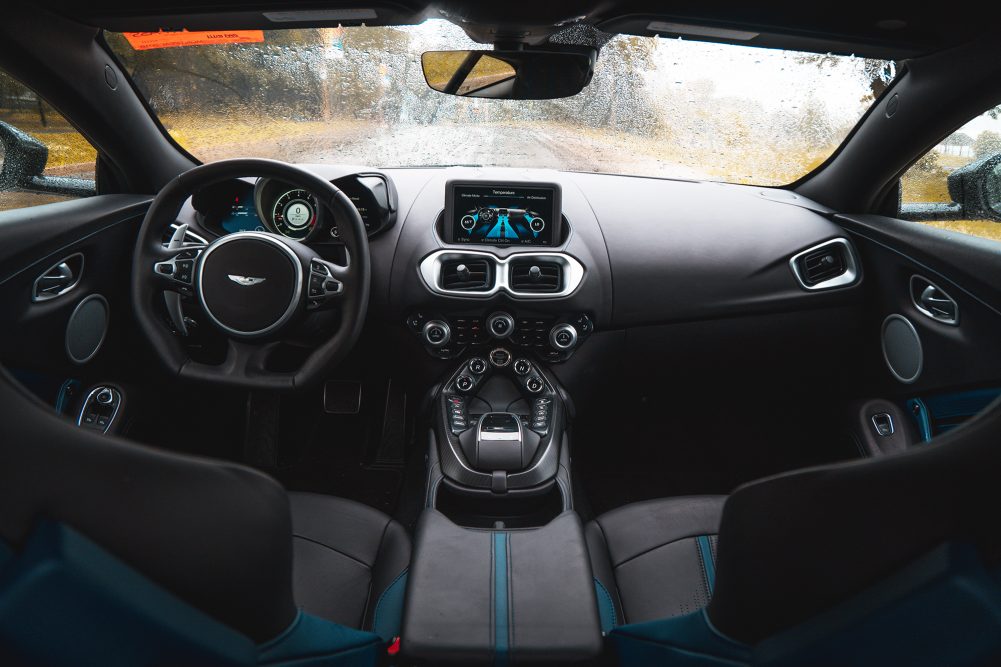 To Aston Martin’s credit, the car’s chassis is all developed in house, so is the suspension.  Concentrating solely on the car’s structure, and designing it around a new, lighter V8 engine allowed Aston Martin to explore new ways of maximizing the car’s weight distribution.

The Vantage actually rides on a platform that’s heavily derived from the larger DB11, but it’s been shortened and stiffened in order to fit the requests of this track-oriented machine. Evidently, its steering is sharper and the entire machine feels much lighter on its feet, more so even than a Porsche 911. 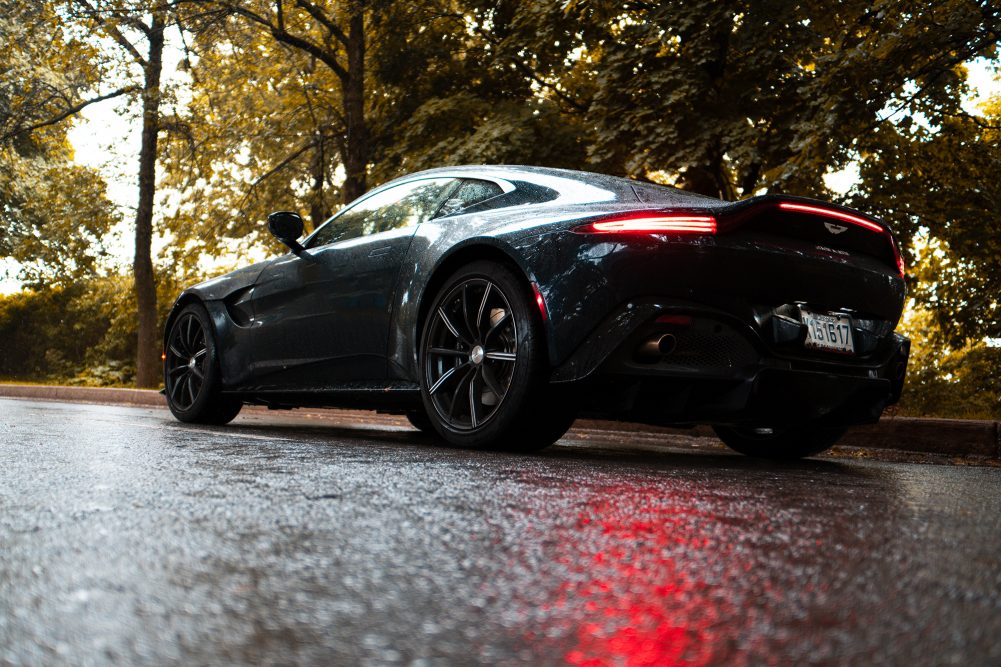 But unlike a 911 which is a lot more buttoned down, the Vantage is an animal with a flamboyant personality. It’s refined, sure. When its adaptive dampers are relaxed, the car will cruise around town and absorb potholes no sweat. But it remains a loud and bouncy car, where drivetrain wine and exhaust booms constantly invade the cabin.

You’ll want to turn that dial on the steering to Track mode. That’s when the dampers firm up and the rear, electronic differential does its magic. In this mode, the Vantage’s rear end is lively, so make sure you’re wide awake, the eight-speed gearbox snaps cogs with gusto and the engine pulls strong with absolutely no turbo lag. It loves to rev in a buttersmooth manner, the way a Mercedes-Benz V8 should, and its exhaust sounds like rapid-fire thunderbolts. Also, I’m personally a fan of column-mounted paddle shifters, instead of the ones fitted on the steering wheel. They provide more control when the beast decides to act up, which it loves to do often.

Essentially, the Vantage doesn’t welcome you into its world by shaking your hand with a smile and a greeting. It spits in your face and stares you in the eye without the least intention of apologizing. That’s precisely when you realize this car is still British. It has one hell of a character.

But, There’s a Slight Problem 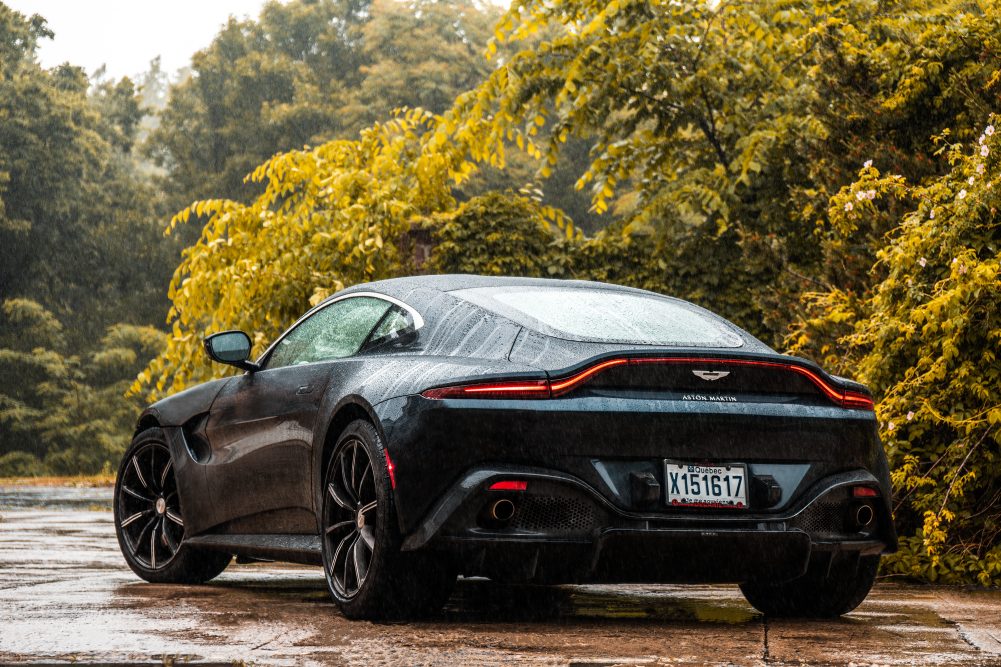 So, to nobody’s surprise, the Vantage is stupidly quick, loves to scare its driver all while remaining very controllable and will happily take part in majestic powerslides the moment you let it loose in the wild. Aston has created the perfect sports car then. Not exactly.

Its cabin looks amazing in photos, but as you approach it, the Vantage’s build quality is immensely disappointing for a near $200,000 high end sports car. Ok, fine, it’s been heavily improved over past Astons, but that’s like saying a hurricane is better than a tornado.

There are neat design cues and some fancy materials – kudos to Aston Martin for uping its interior game and finally fitting its cars with electronics that actually work – but it’s hard to hide the awkward way the instrument panel fits together, the blizzard of tiny, hard-to-discern buttons on the center stack or the uninspired door-trim panels. 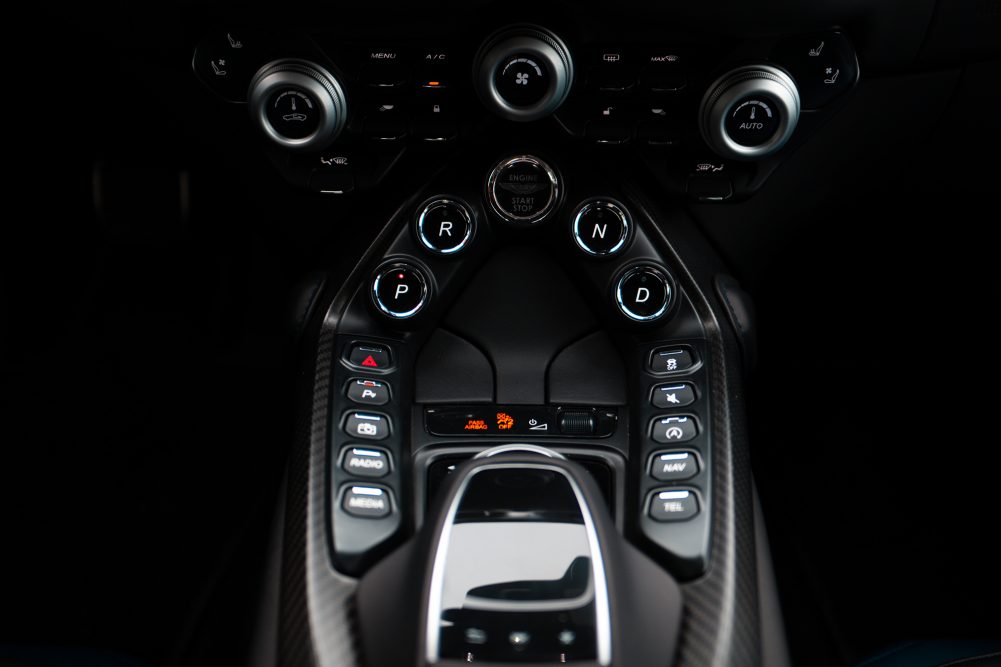 Finally, there’s the amount of Mercedes-Benz found in the cabin. The infotainment system, the frustrating touchpad/knob dial put there to operate it, wiper stalks, light switches, even the warning sign telling you to “not forget your key” seem to have all been lifted directly from a Mercedes-Benz E-Class. For this money, you’re expecting exclusivity, not a parts bin special of German parts from another brand. 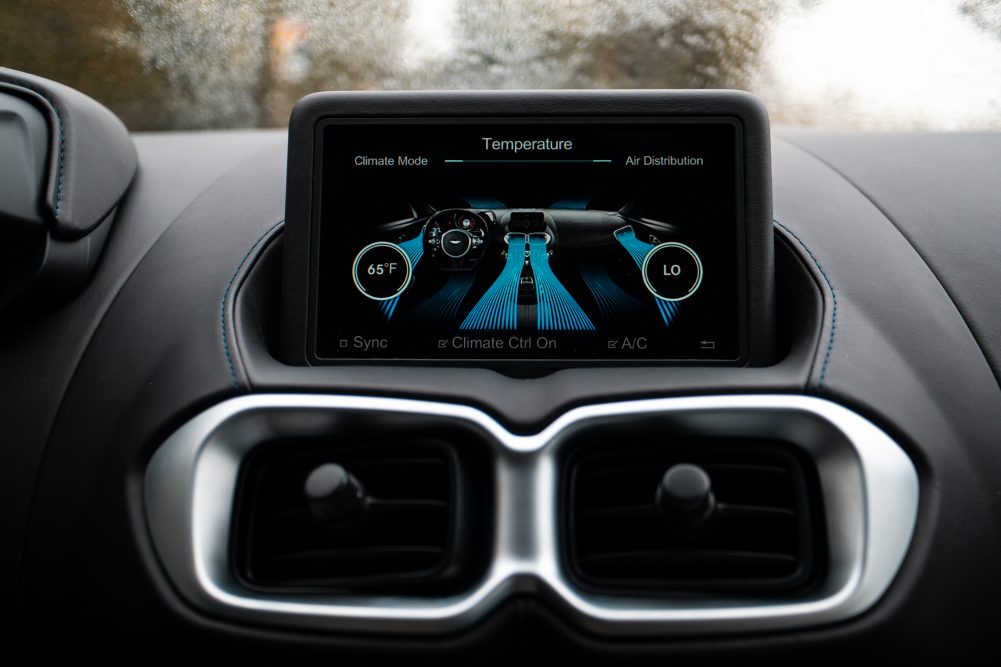 But hey, the 2019 Aston Martin Vantage has a lot going for it. For one, it manages to safeguard the brand’s legendary character all while keeping up with today’s latest technological advancements. If it requires borrowing a few light switches from Mercedes-Benz, so be it. At least the car performs and looks distinguished.

Besides, seeing Aston Martin return and kick ass against the best machines out there with a car so gorgeous, sexy, capable and totally mega is inspiring all on its own. The Germans may have removed some of the quirks out of the British, but only the British still know how to build a proper Aston Martin.

Review of the 2019 Aston Martin Vantage by William Clavey
Supercars