Looking Back At The E93 BMW M3 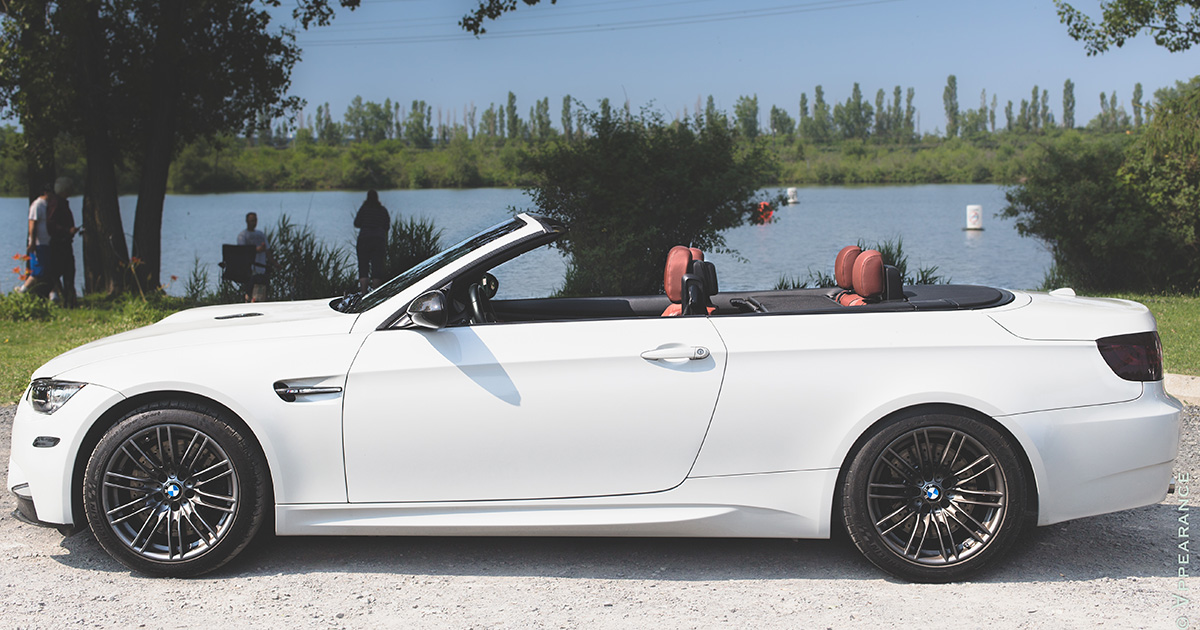 If you were to ask any BMW faithful which is the most iconic M3 of all time, chances are they’d call out the E30. Yes, that car may mark the birth of the breed, but in my opinion, the E90 was much more significant, because it ended a long and successful legacy of naturally-aspirated M cars; a major change of ethos for such an iconic nameplate.

Yes, naturally-aspirated BMWs are now far behind us. For those of you who have been following my blog, you’re well aware of what I think about the brand’s current and future lineup of cars. That being said, I figured it was appropriate to look back at what made the E90 so special.

Powered by what was at the time the most technically advanced V8 engine in the world, this generation of M3 basically kept what we all liked about the E46, and simply cranked up the amperage. With high revs, lots of noise, a perfectly balanced chassis, and well-executed proportions, it had all the ingredients to get any enthusiast’s pulse rushing.

I had the opportunity to take one out for a drive, and this is what I have to say about it. 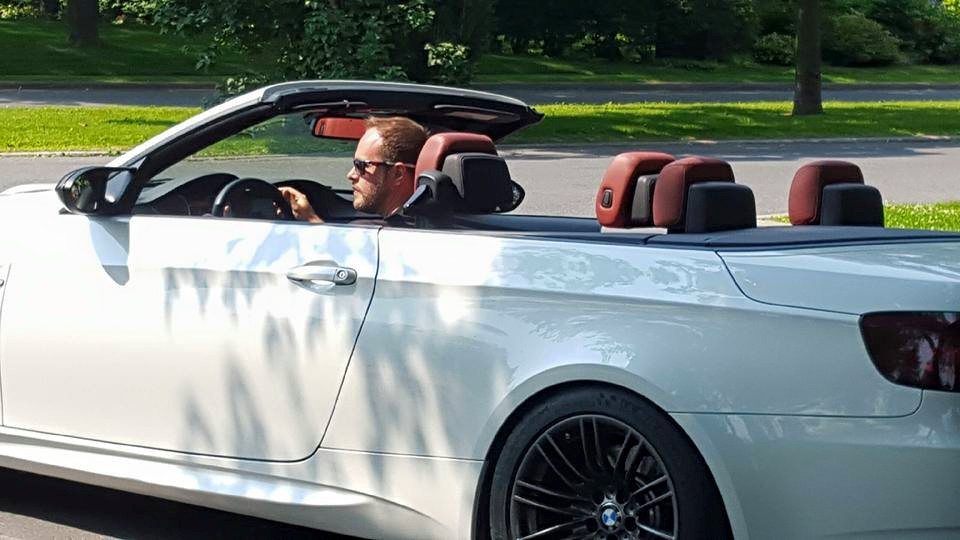 My tester was a Pearl White Metallic convertible (an E93), which I believe made sense, considering it’s summer and nice and hot outside. Plus, I figured it was a good idea to take a closer look at this version of the M3 since it’s despised by most enthusiasts.

You see that fancy, $12,000, overly-complicated hardtop that folds in the trunk origami style? Well it’s heavy as hell. Really heavy. Add to that all the added chassis rigidity, and the E93 is a whole 500 lb heavier (3,990 lb total) than the E90 coupe.

Which means it’s a half a second slower from 0 to 60 (4.5 seconds vs 4). To make things even less enthusiast-friendly, the car I was driving was equipped with BMW’s DCT 7-speed dual clutch transmission. Yes, DCT may be an efficient system that allows this M3 to put down great acceleration times on paper, but in the real world, it takes away much of the driving feel and pleasure we’ve come to expect from past M3s.

So, it’s a convertible with an automatic. This car sucks right?

Hell no. This car fucking rocks.

Because you still have 414 hp at your disposal, and no matter how much weight you’re adding to a car, 414 horsepower is still 414 god-damn horsepowers. That engine, the 4.0 liter V8, well it’s a masterpiece. Almost completely made out of aluminium, this tight little unit is shorter and 33 pounds lighter than the 3.2 liter straight six that powered the E46. It also gets better gas mileage.

But it’s the way this thing pics up the revs that is truly astonishing. It really sends shivers down your spine. Cranking out “only” 295 lb-ft of torque at 3,900 rpm, it may not be the low-end torque monster that the F80 has become, but let those revs climb and the S65 will sing a glorious German metallic melody all the way to a proper 8,300 rpm redline; a figure we’re not likely to see anytime soon in the current generation of turbocharged BMW M cars. 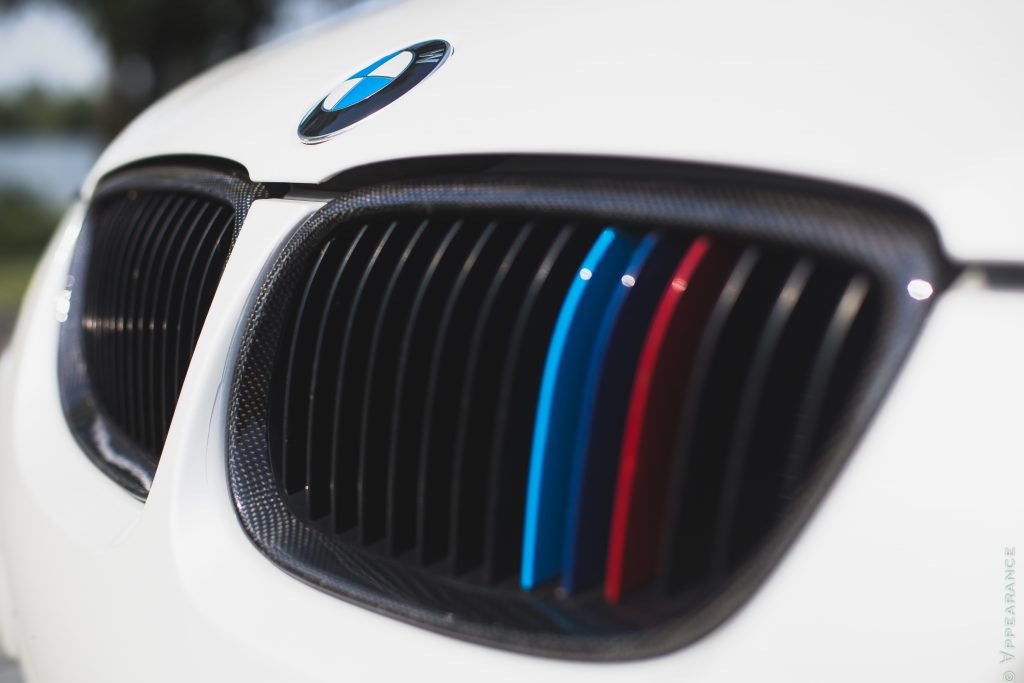 And it’s fast. Very fast. Stomp the go pedal with the traction control off, and the rear tires light up while the entire car launches forward with grace. That V8 pulls strong throughout the rev range, it screams, it growls, it barks, and even if you don’t get much of a kick until you start climbing up that rev counter, you still get plenty of V8 oomph to cruise around town.

It’s a blast to drive. All the time.

I’ve always been impressed at how well executed BMW M cars are. When behind the wheel, you’re well aware that these are serious track machines that need to be tamed, yet, when driving them casually around town, they feel like any other BMW product. When I wasn’t driving it like I stole it, the M3 simply felt like a louder and stiffer 335i. 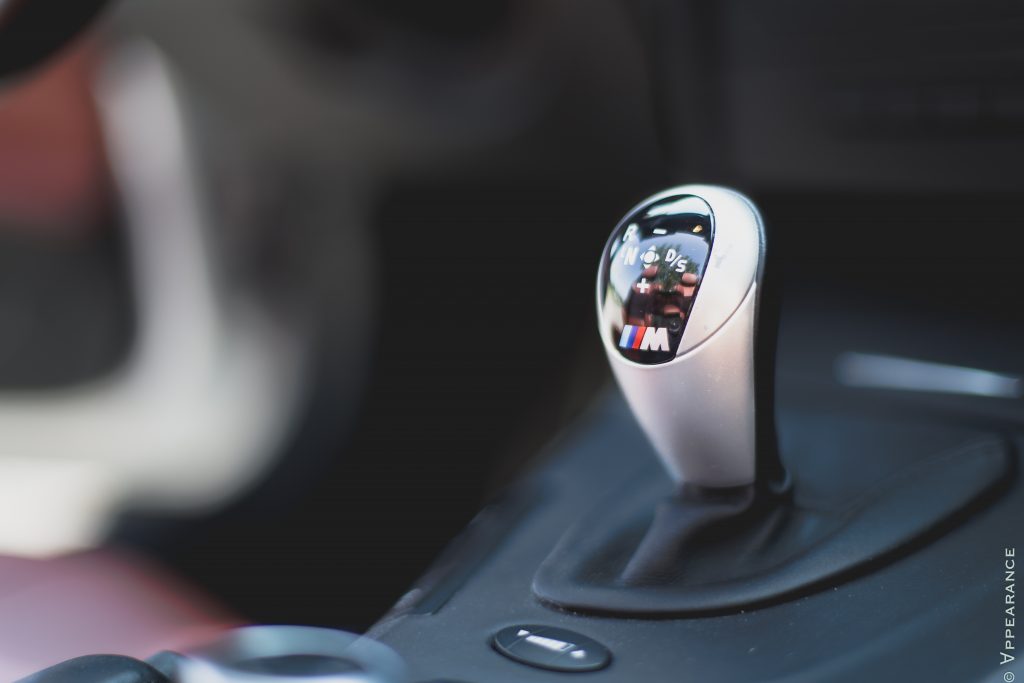 BMW’s DCT transmission may have been an impressive bit of engineering when it came out back in 2007, but it’s already showing its age. I had driven the E90 coupe back in 2009 equipped with that same box and I remember raving on how quick and brilliant the system was, claiming that it was, in some cases, more enjoyable than a stick.

It’s an impressive box that actually manages to stir your soul. Even in auto mode, it downshifts at the right moment and is quick to react when you punch the accelerator. You can even adjust how fast it shifts. And I love the way it blips the throttle every time you drop a gear. I never felt that this transmission was preventing me from having fun.

Yet, today, in 2015, after sitting behind the wheel of some more modern offerings, the E93’s system feels a bit laggy. There’s always that tiny delay between the time you pull that paddle and the time the system actually shifts. The reality is not that the E93’s system is dated, but that dual clutch transmissions are evolving at a tremendous rate.

Which makes a great argument to get a car with stick. It may be slower, but it’ll never feel outdated. 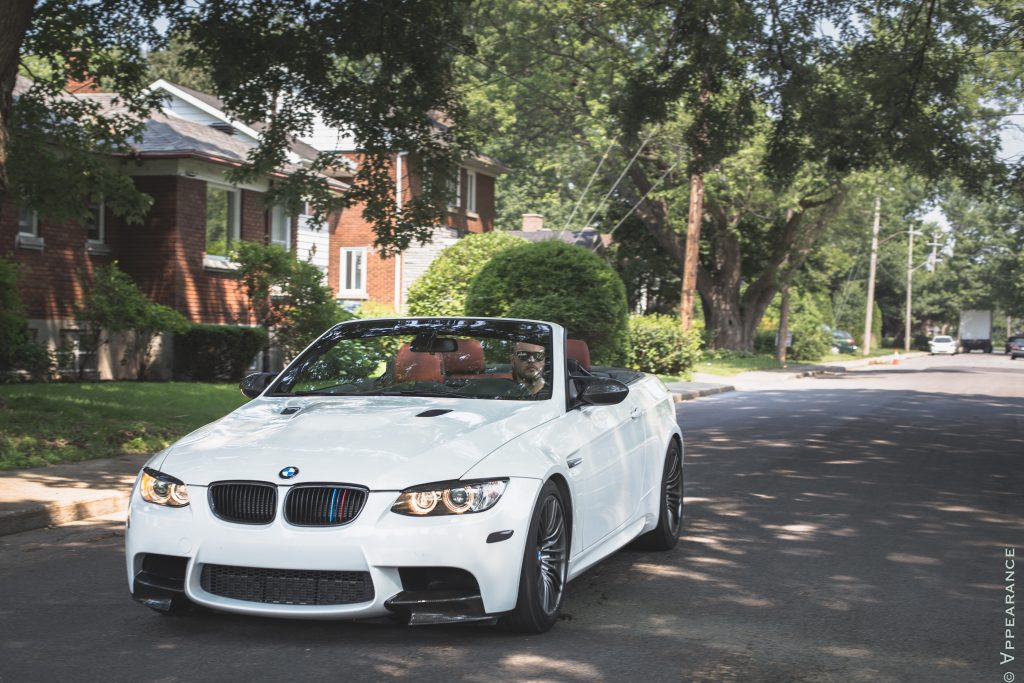 So, in the everyday world, does the convertible feel any different than a regular M3?

And even if you were to bring your drop top Bavarian to a race track, it wouldn’t do you shame. This is still a proper M car. Weight distribution is spot on, stab the throttle in a corner and yes, that rear end will still be perfectly controlled even though there’s a heavy piece of metal lying in the trunk. Yes, it’s got a fat ass, but it knows how to move it around.

Chassis rigidity never seemed to be an issue neither, the car remains nice and planted in corners and never once did I feel it flex. The entire car absorbs cracks and bumps in a civilized manner, the way you’d expect a BMW to behave. 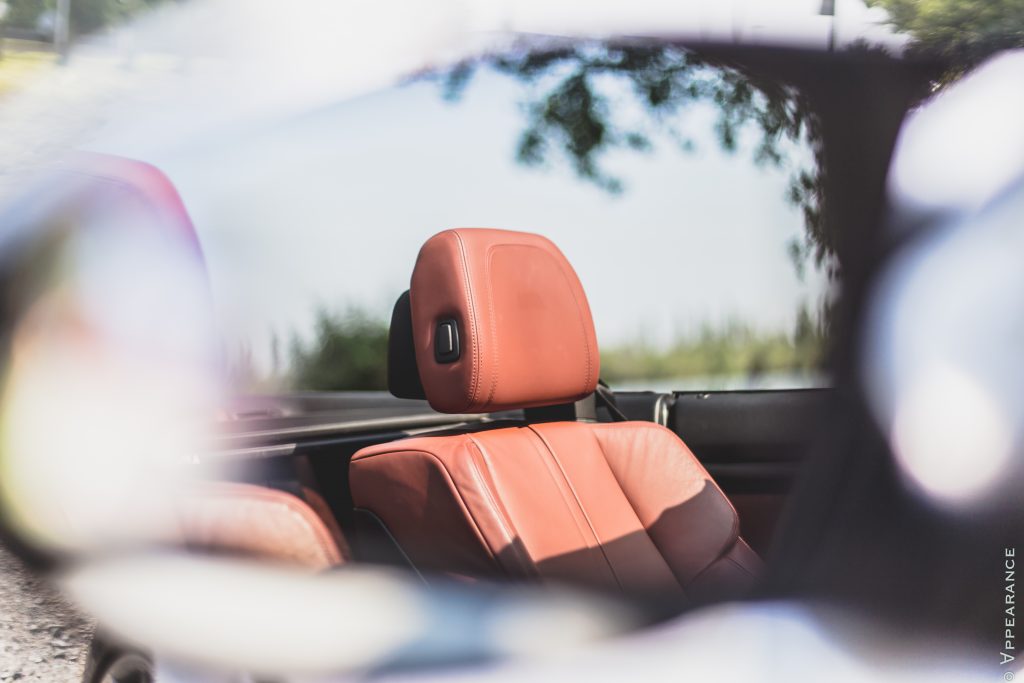 What I enjoyed the most from the convertible though is how much you hear the sound of that glorious V8 coming out of those 4 cannons out back. It sounds properly gnarly, especially since my tester was equipped with a performance exhaust. 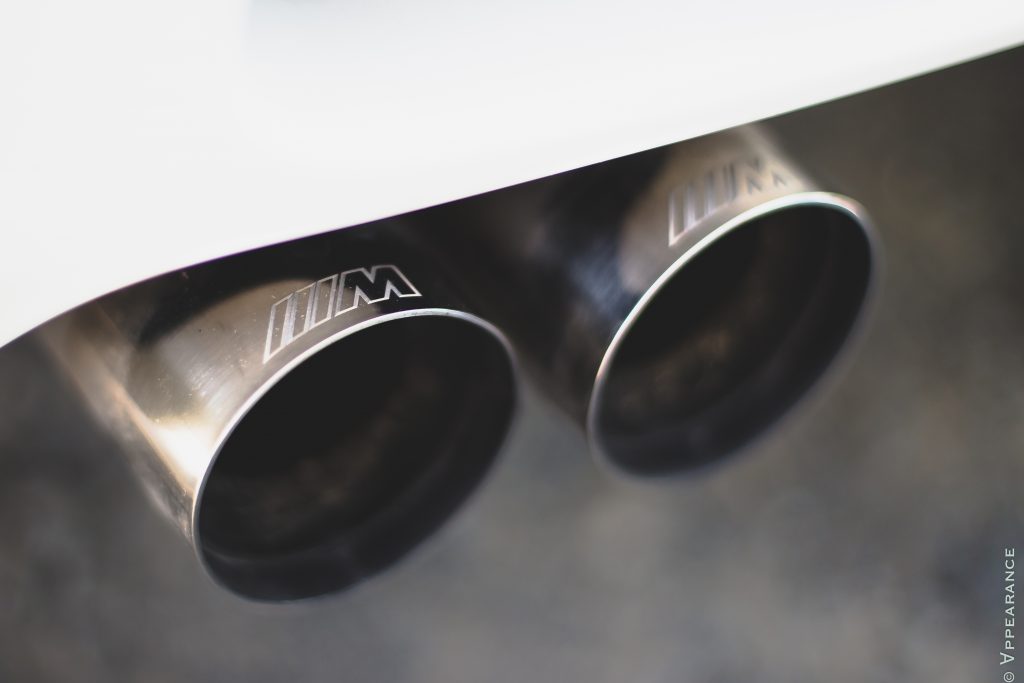 Add to the experience no roof at all, sun in your face, and wind through your hair, and thrills are amped up just that extra notch. This car may seem slower on paper, but when you’re behind the wheel, it actually feels faster.

And that, the feeling of thrills and speed, well it says a lot more about a car than any specsheet can.

Yes, somehow, BMW have managed to do miracles with 500 extra pounds on board. Even if this car is roof-challenged, as I was driving it, I never said to myself: “this car needs more power”,“this car is too heavy”, or “this car needs to be stiffer”. Actually, as far as my memory is concerned, it felt exactly the same as the E90 coupe I had tested 6 years ago.

A Relic From The Past 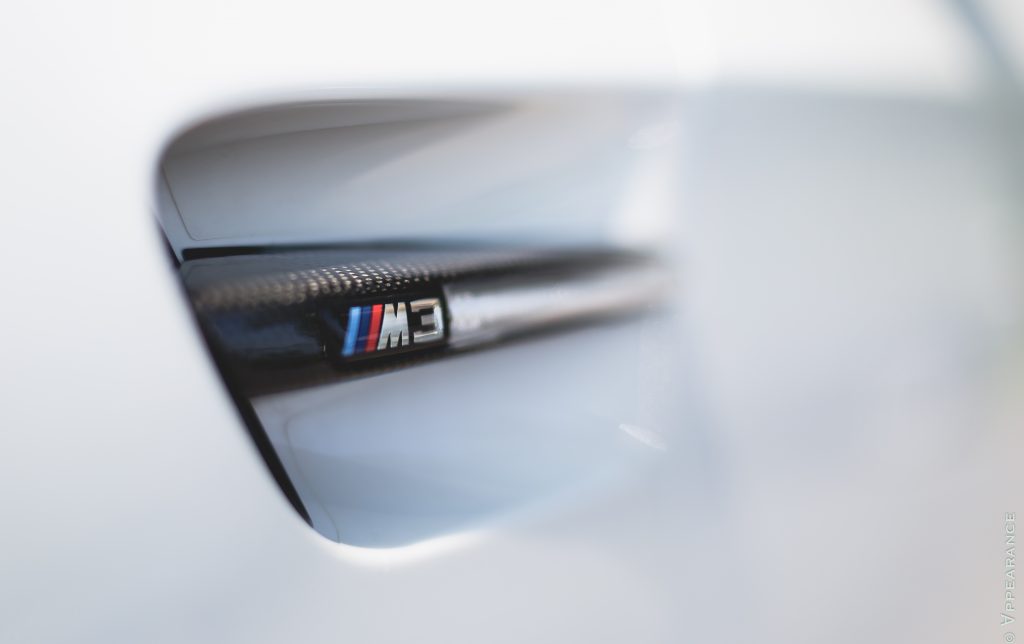 At the end of the day, I felt nostalgic that BMW’s aren’t this way anymore. I still haven’t driven the current M3/M4, but I’ve driven both a 2015 228i and a 335i, and even though those cars aren’t M machines, they’re still completely different animals than the BMWs I grew up with. Yes, those new turbo engines may put down big numbers and are efficient as hell, but they’ll never come close to the thrills that the naturally-aspirated machines of the 90’s and early 2000’s would transcend to their drivers. 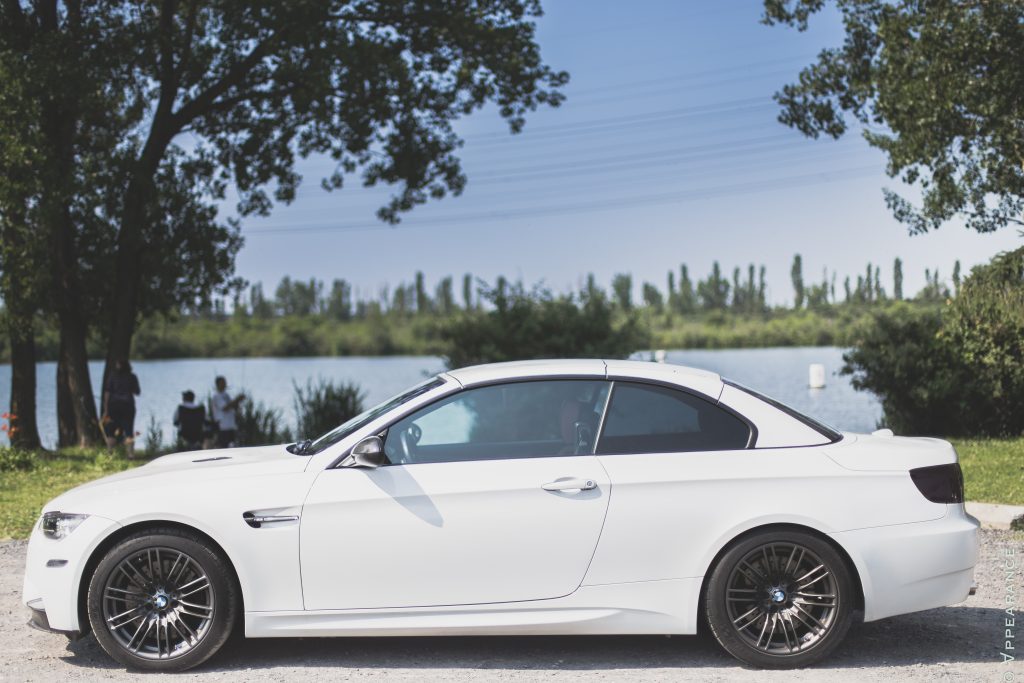 So yes, the convertible M3 is definitely a case of you don’t judge a book by its cover. Would I pay the extra money for the drop top? Probably not. Unless I was the kind of person that favored looks over performance, which I’m not.

No matter the configuration though, the E90 makes me wonder: if BMW were to release a high-revving naturally-aspirated track machine today, would it still be welcomed in today’s world?

Ask Porsche, they seem to be doing just fine with the GT3.