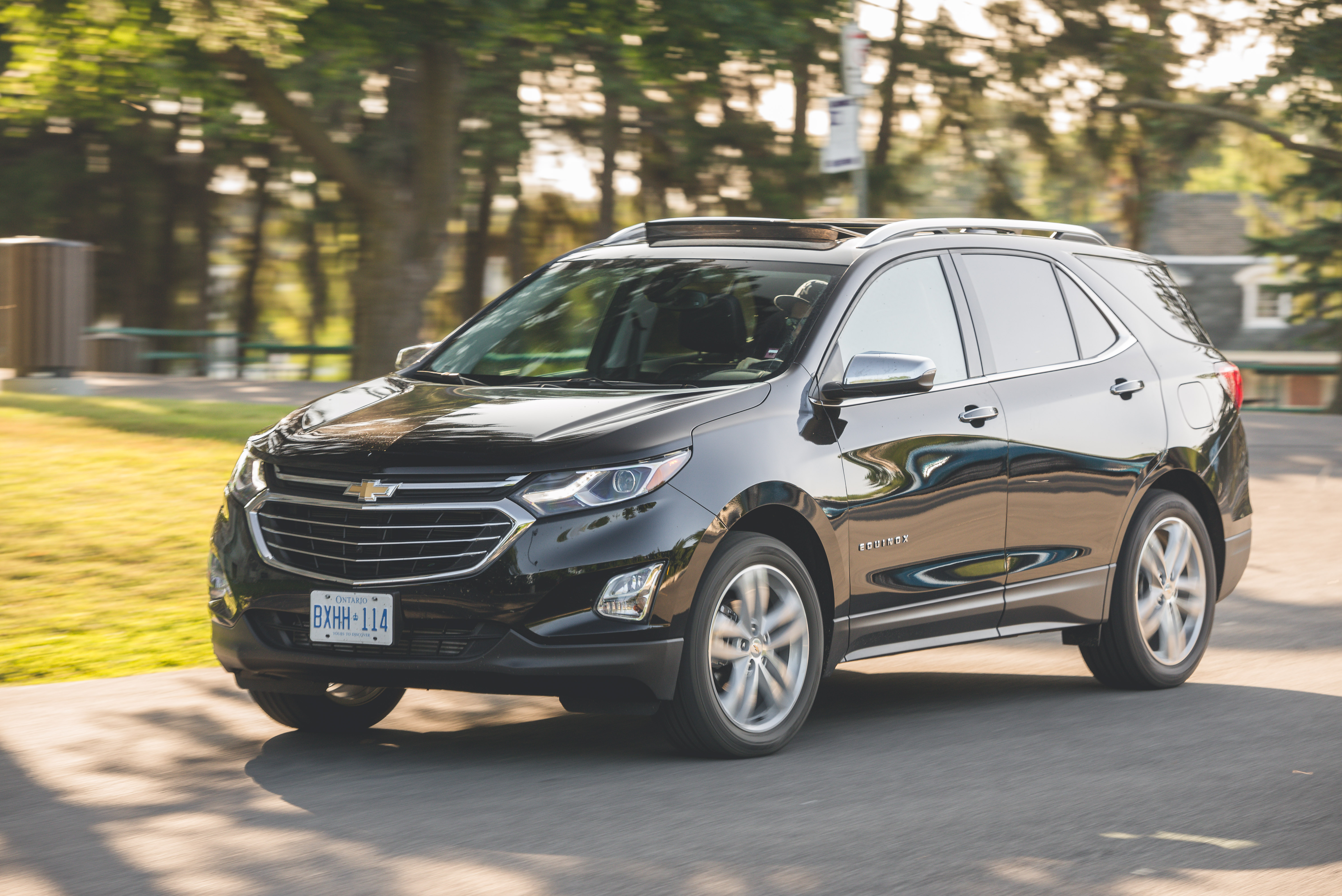 Reviewing compact crossovers often feels like copy-pasting information from each offering, changing a few lines, and calling it a day. With these vehicles now being the shuttle of choice for young Canadian families, carmakers are rushing in to outsell the competition in the form of cargo space, efficiency, standard features and style. There’s a lot at stake here and the race has become so competitive, that none of the available contenders, weather it be a Honda CR-V, Mazda CX-5, Toyota RAV4, or Toyota Tucson – just to name a few – are considered bad cars. In fact, they’re all excellent.

Take the 2018 Chevrolet Equinox for example. At first glance, you’d swear the people at GM bought a CR-V, studied it, and copied every single inch of the thing. But after spending more time with one, I quickly came to an obvious conclusion: the General now engineers fantastic vehicles. And the Equinox definitely is one of them. 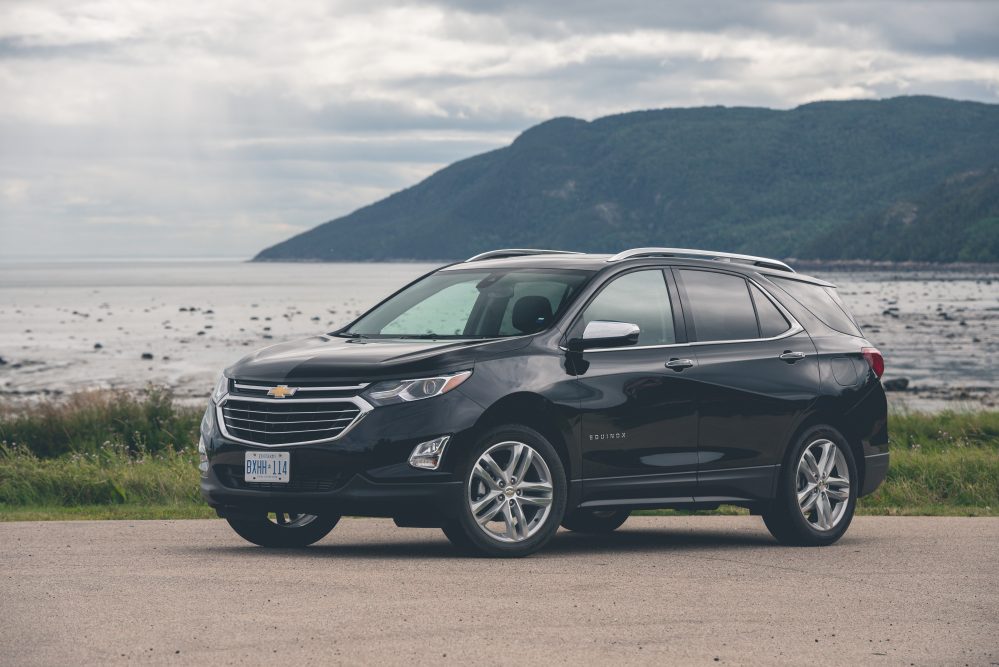 Stlying wise, the Equinox easily flies under the radar. While the CR-V is a case for sore eyes, even for a gundam, Chevrolet’s people mover sits at the complete opposite of the spectrum by remaining conservatively styled and quite frankly, rather bland. But it’s not an ugly vehicle, it just doesn’t evoke anything special, almost as though Chevrolet purposely held things back to prevent consumers from brushing it off their shopping list simply because of the way it looks. I guess if you’re trying to outsell the competition in a segment where purpose and value prime over style, it all kind of makes sense. 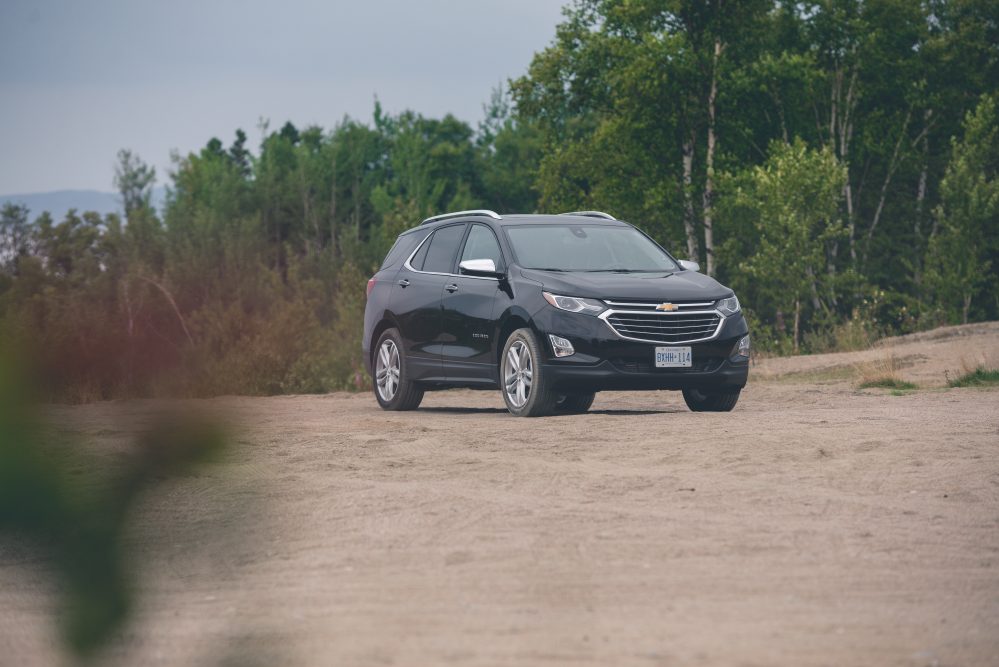 But it’s really the balance of sophistication and good old common sense that allow the Equinox to stand tall against its competitors. During my first drive of the thing in Nashville earlier last summer, I was pleasantly surprised with the Equinox’s road composure, nimbleness and downright well executed refinement, putting it more in tune with its Germanic offerings in the likes of the Volkswagen Tiguan and yes, the Audi Q5. 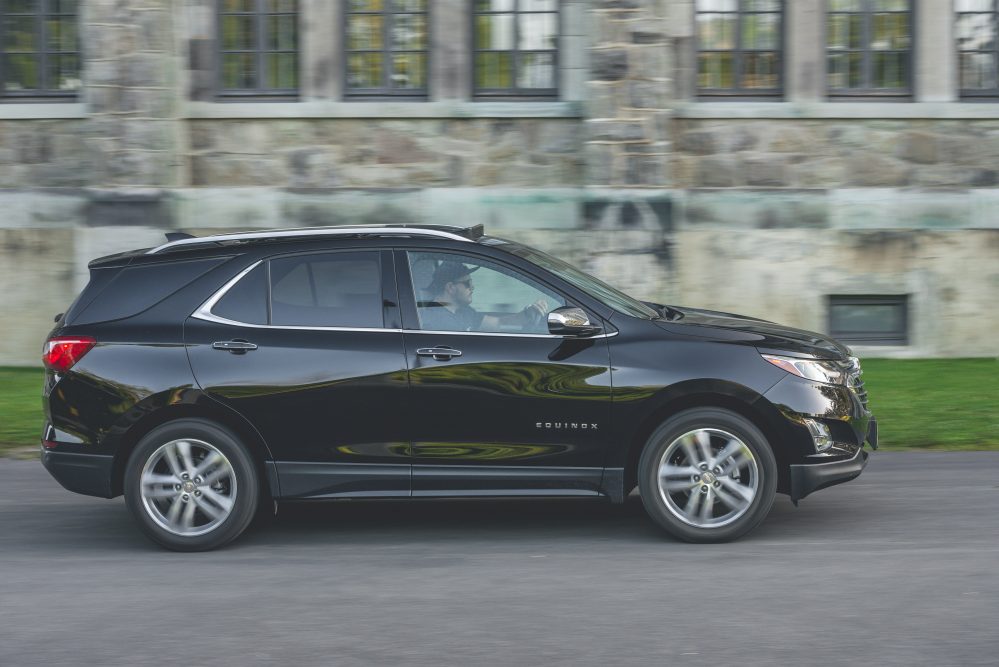 An area where the Equinox definitely has an edge on the competition, is in engine choices. At the moment, it and its cousin, the GMC Terrain, are the only vehicles in the segment to offer a diesel option. The latter is a 1.6-liter turbo four good for 137 horsepower and 240 lb-ft of torque. Top-of-the-line Equinox trims come with a 252-horsepower 2.0-liter turbo gas-powered four-pop. 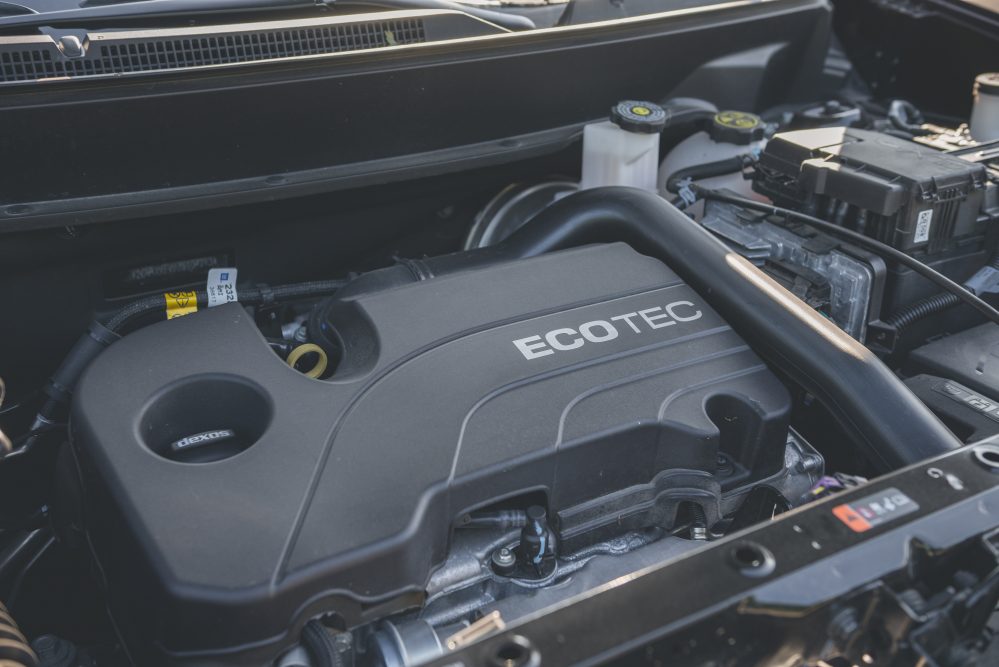 This tester was fitted with the engine people will buy, the 1.5-liter turbo. It’s good for 170 horsepower and 203 lb-ft of torque. This positions the Equinox in a lower power scope compared to the Honda CR-V, but still with considerably more torque. Don’t forget though, we’re talking about the CR-V’s top engine, while this is the Equinox’s base offering. Meanwhile, 1.5-liter trucklets come fitted with a six-speed automatic and a choice of front or all-wheel-drive. 2.0-liter offerings come fitted with GM’s all new nine-speed unit which was co-developed with Ford. 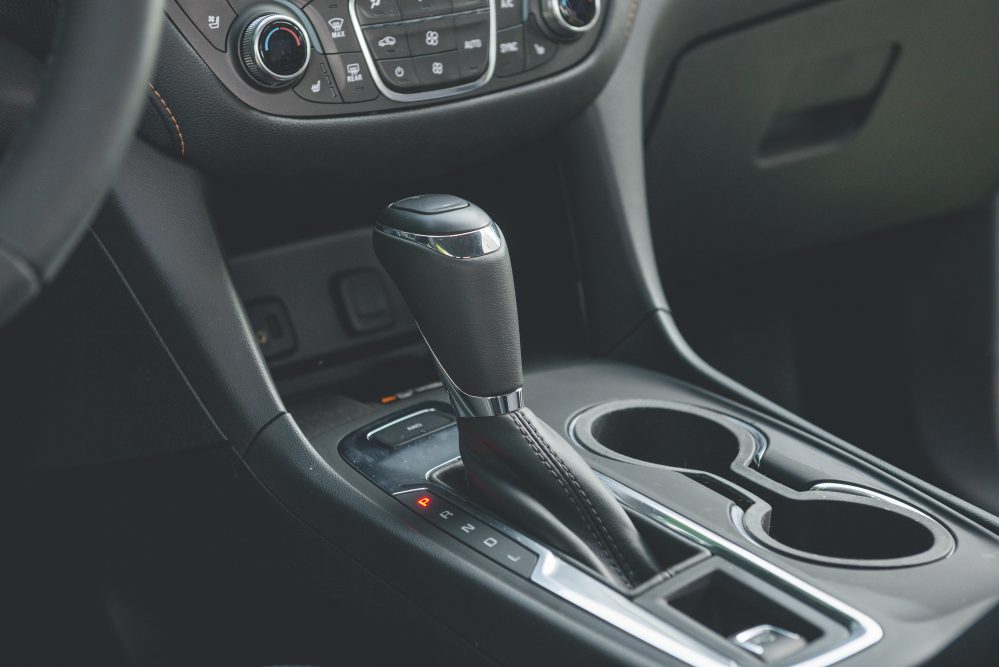 On the road, the immediate noticeable element about the Equinox’s drivetrains are their smoothness of operation, even for the 1.5. Engine note, however, is not an Equinox quality, sounding more like a muffled vacuum cleaner than an actual engine. But there’s ample low to midrange punch to get the kids and their gear up to speed in a jiffy. With a 0 to 100 km/h acceleration time of 8.9 seconds, it’s definitely behind the competition, but again, as a base engine, it’s more than ample, providing smooth takeup in any gear. 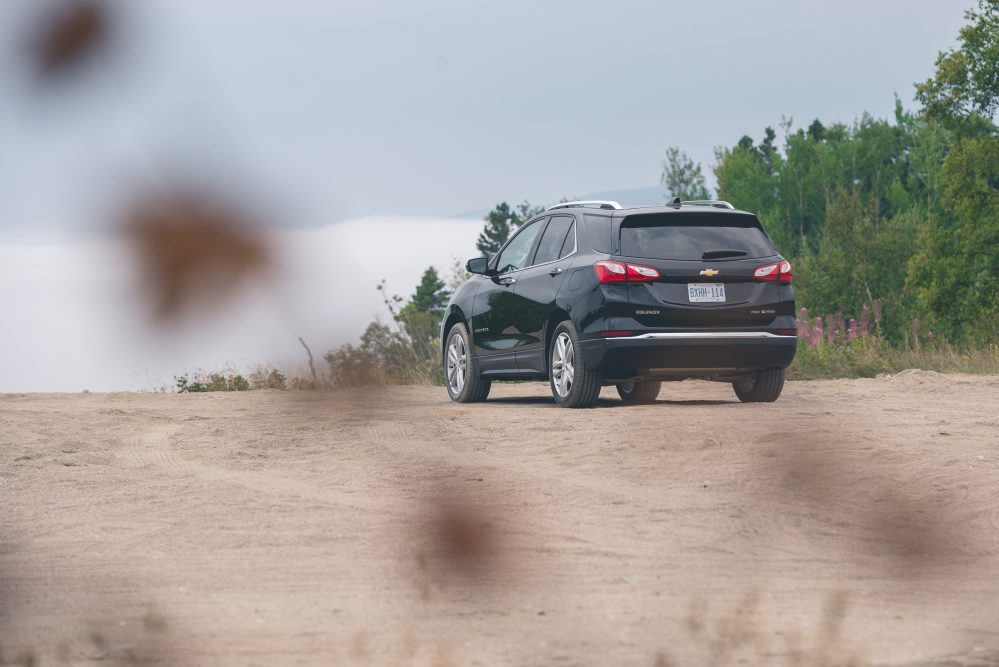 Those wanting more substantial performance should get the 2.0-liter, which I drove and was frankly more than satisfied with.  At least the automatic transmission is a peach, shifting seamlessly in the background, always ready when you are, downshifting quickly when ordered to do so. GM insists on convincing consumers that it’s possible to shift using the tip of your finger. I’m sorry, but those jet-inspired shifting buttons located on top of the lever are totally useless. 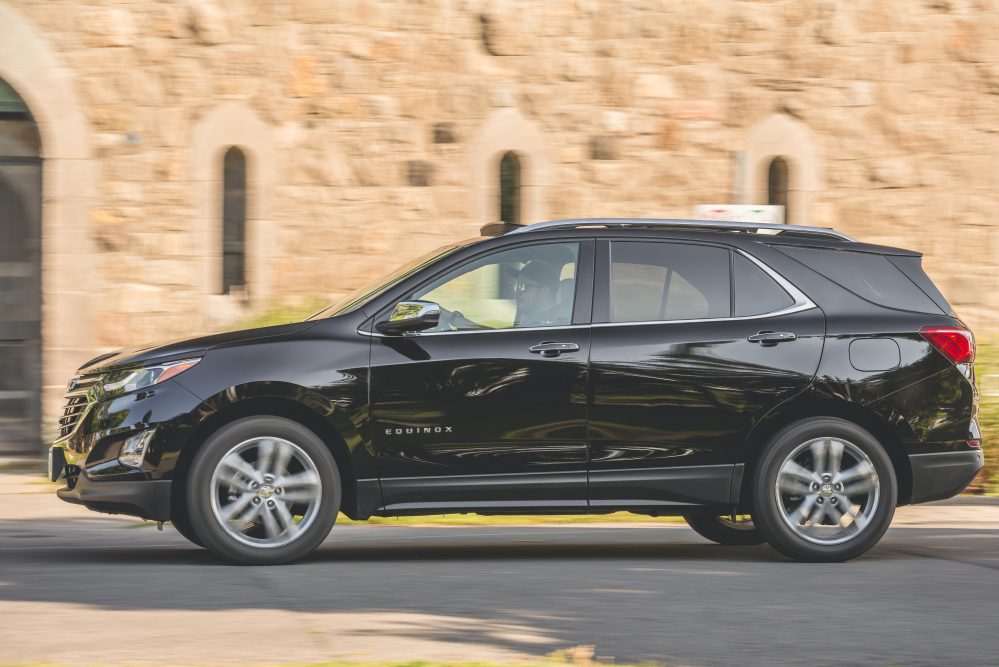 But ride and handling remain Equinox strongpoints. Turn in is sharp, steering feel is impeccable, especially for a vehicle of this class, and the way this crossover stays composed when flogged hard in a corner makes you wonder if members of the Corvette engineering team worked on the car. Wait. 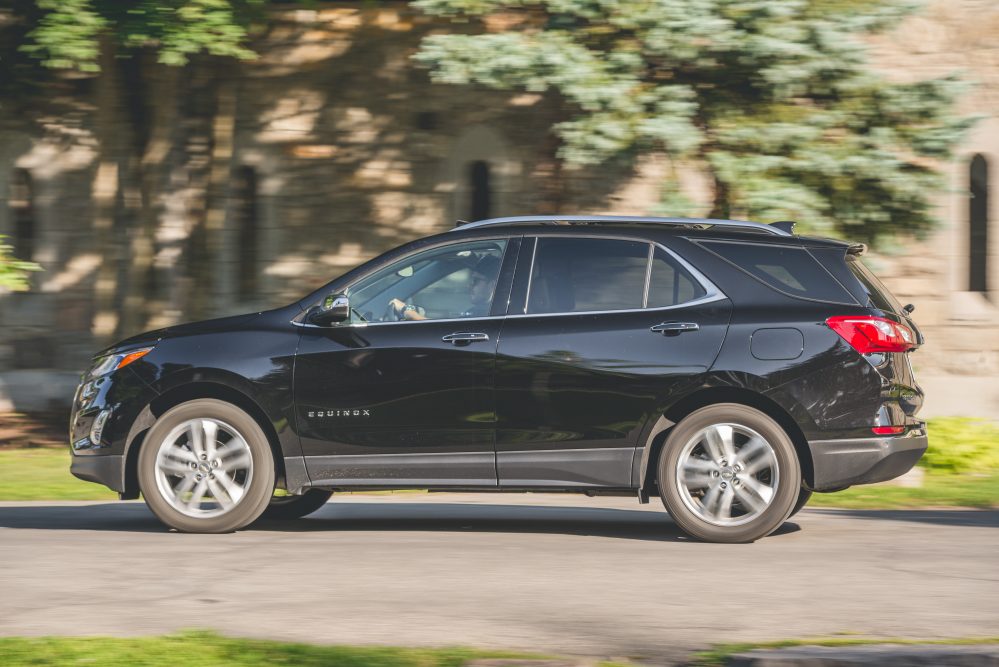 Inside the 2018 Equinox, the stale design theme continues, but manages to somehow remain elegant and functional. Unfortunately, there’s nothing that makes it stand out of the segment. It’s, well, a well put together interior. Nothing more. At least, it’s well put together. Some models are available with two-tone leather interiors, which do help at giving the otherwise spartan cabin more life. 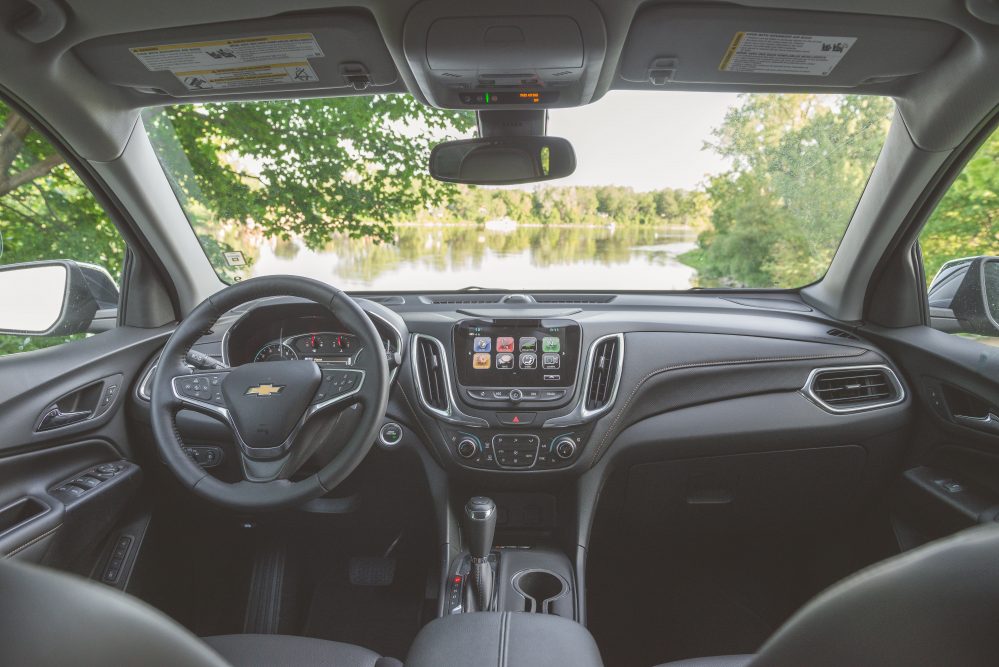 I’ve long lamented GM products for having inconsistent ergonomics from one product to the next, but with the Equinox, we’re finally seeing some similarly placed controls as in the Cruze compact sedan, a welcome change. Chevrolet’s Mylink touch-operated infotainment system remains a leader in ease of operation and user experience. Information is laid out in a simple, easily understandable manner. Android Auto and Apple Carplay are of course standard, as well as 3G connectivity. 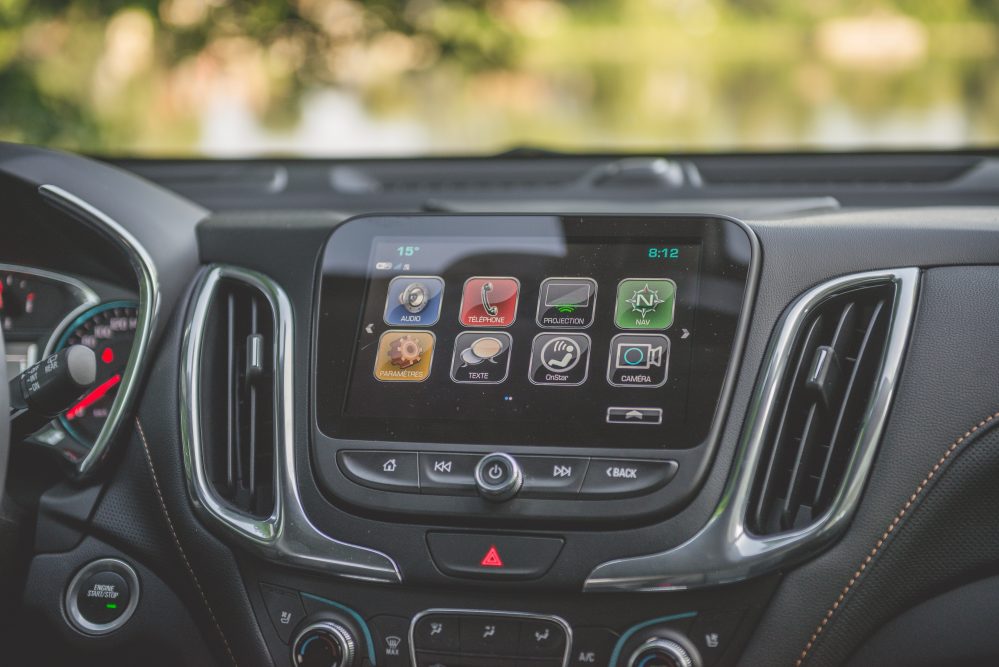 Cargo space is ample in the compact Chevrolet SUV, but still outpaced by some of its rivals. At 64 cubic feet of total cargo space, the Equinox slots under the CR-V and Ford Escape, and barely outguns the lilliputian Kia Sportage. But rear leg and head room are ample in the Chevy, which should prevent the kids from bickering during that summer vacation roadtrip. 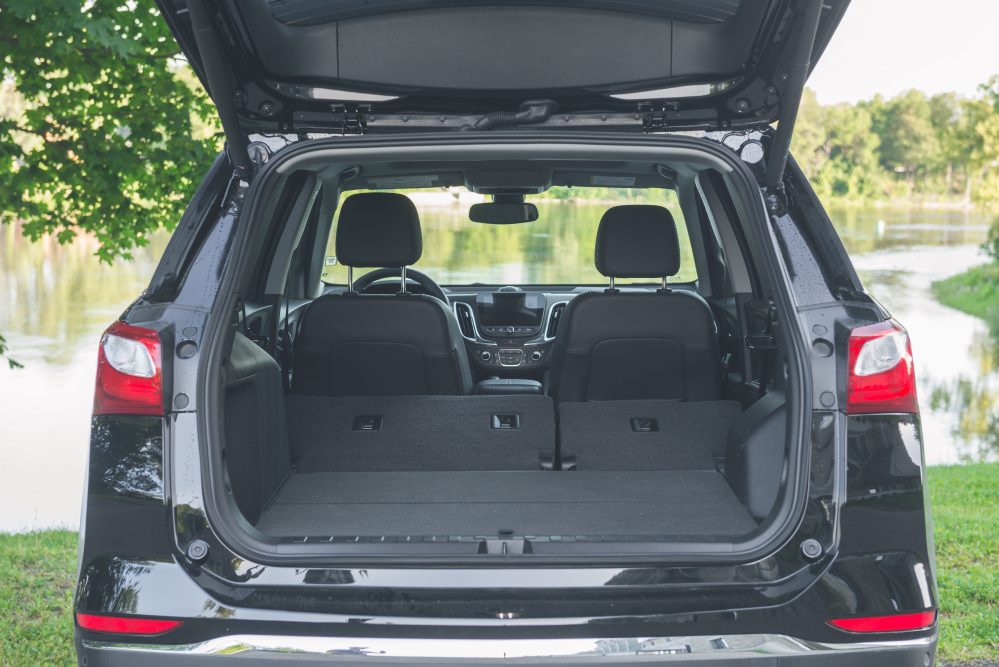 Pricing for a 2018 Chevrolet Equinox kicks off at $27, 590 for a front-wheel-drive entry level model. Top of the line 2.0-liter trims with AWD top the lineup at $40,090. My tester, a fully loaded 1.5-liter Premier AWD sells for $36, 590 and comes fitted with 18-inch wheels,  the larger 8-inch infotainment system and a factory installed trailer hitch. The Equinox’s maximum towing capacity with the 1.5T is rated at 1,500 lb. 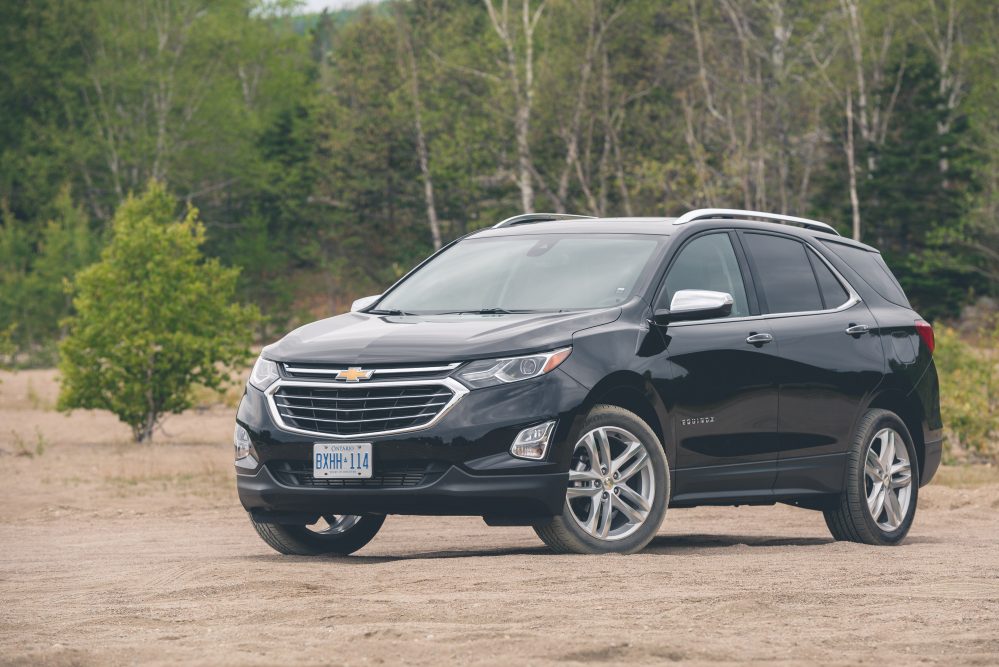 So the 2018 Chevrolet Equinox doesn’t do anything particularly better than its rivals, but it’s sold a competitive price point and does what it was meant to do impeccably well. At the end of the day, what consumers want from their family shuttle is a well put together utility vehicle that offers decent cargo space, drives and looks good and consumes respectable amounts of fuel.  This one hung around the 8,0L/100 km mark. Not bad at all. That being said, the Chevrolet Equinox is an well put together, well mannered and properly equipped; enough for it to finally figure at the top of the shopping list of consumers.

Review of the 2018 Chevrolet Equinox by William Clavey
Compact Crossovers