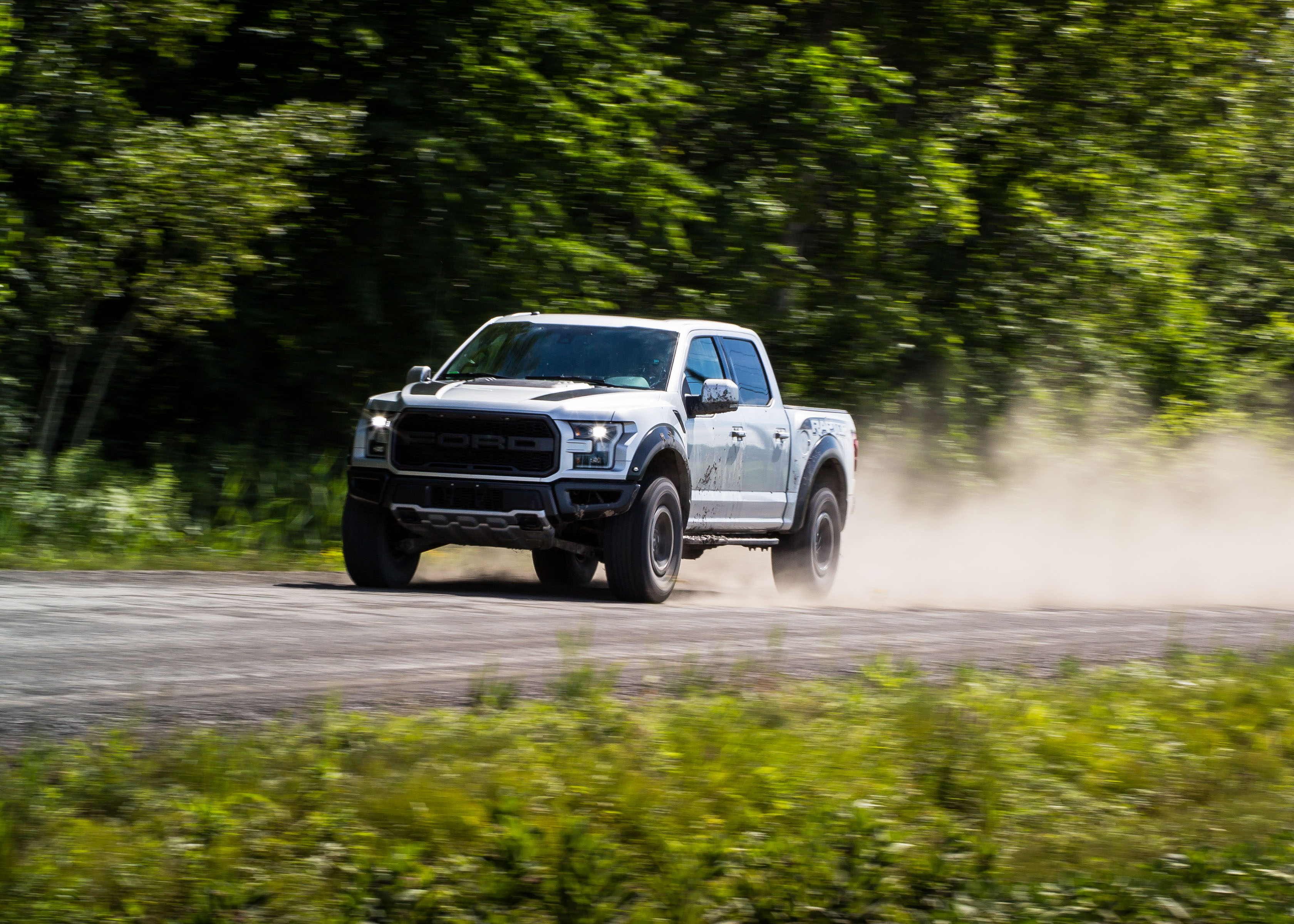 Ford markets the 2017 F-150 Raptor as a toned-down trophy truck that will allow its owners to drive straight out of the showroom, and into a desert to take part in some good old fashion dune jumping. On paper, that looks like a hell of a lot of fun. On YouTube, it’s immensely entertaining. But in the real world, it doesn’t mean a thing.

My experience with the Raptor as a single, early thirties male living on the outskirts of a crowded, electrified city like Montréal, which has no desert or dunes in sight, made me contest its existence. After spending an entire week with it, one question still simmers in my mind: who on God’s Earth buys these things?

The Want Factor Is High 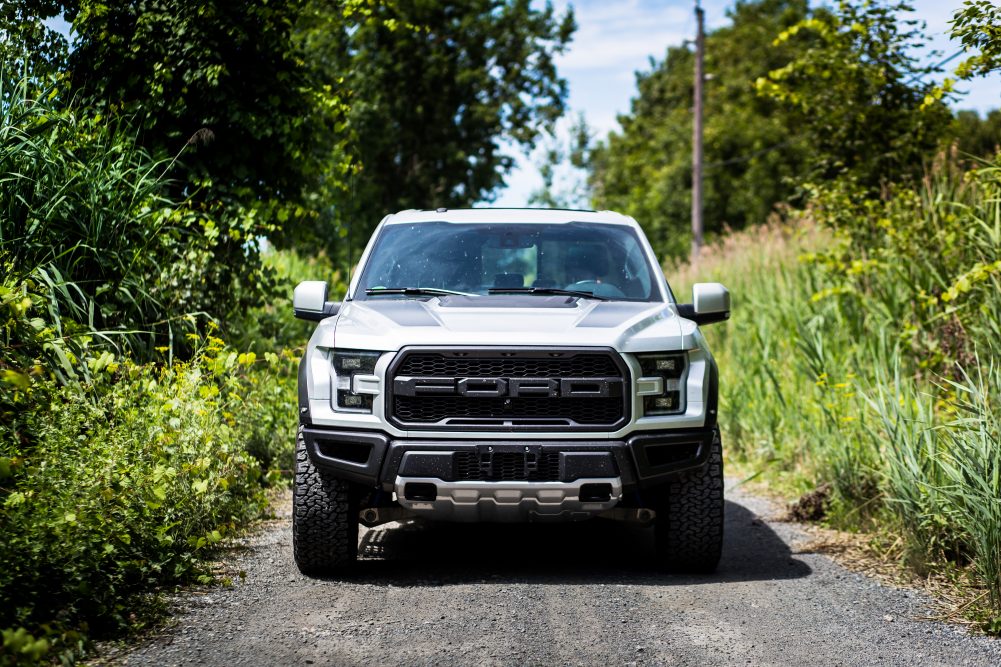 I’ll admit that I, like any honest red-blooded automotive enthusiast, was excited when Ford Canada agreed to loan me its 450-horsepower, wide-body, twin-turbo rig. There’s no going around the fact that the Raptor is a vehicle that attracts a lot of positive attention, especially for adult boys who grew up playing with Tonkas and home-built dune buggies dad had somehow conceptualized in his shed. This thing is a dream come true for spoiled millennials that hung out with too many toys growing up. 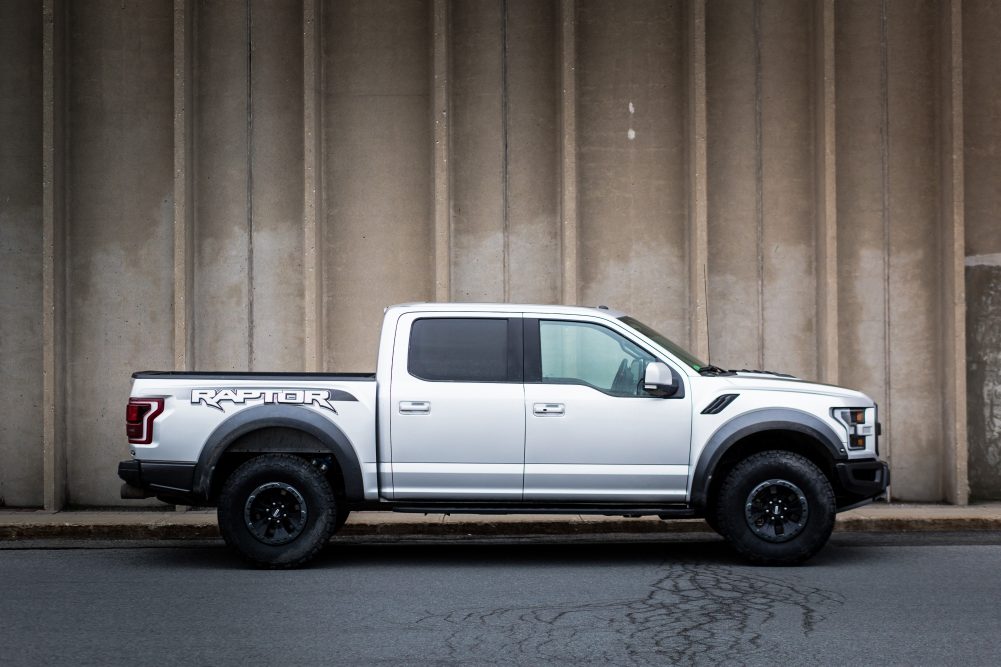 Of course, the 2017 Ford F-150 Raptor’s standout feature is its corpulence. Thanks to a wider overall track, this big guy is over six inches wider than the regular truck on which it is based. Fender flares and massive FORD lettering front and rear make sure to remind you this one speaks business, and also where all the madness comes from. 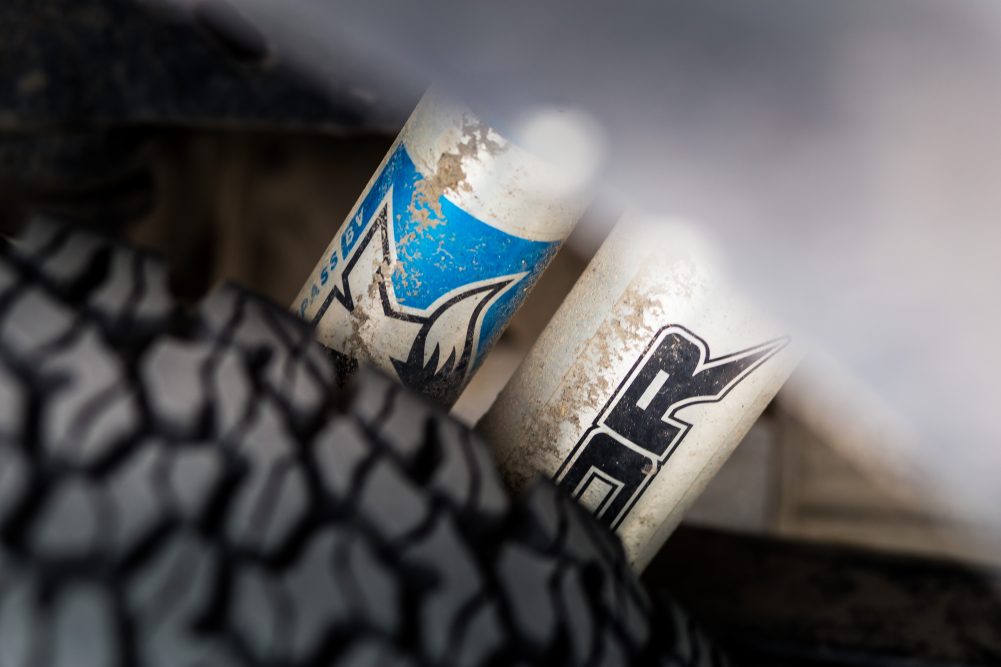 At first sight, the Raptor looks rather naked, free of superficial cosmetic add-ons, there are no chrome wheels or sidesteps here. Instead, the Raptor’s design cues are functional. A two-inch raised ride height reveals the underbed of an aluminium body. Massive holes in the steel-reinforced front bumper show off a set of oversized, three-inch diameter shocks with the letters FOX stamped all over them, and bypass reservoirs hanging on each side, like what you get on a Dakar-spec’d motocross.

So when Ford says this thing can run over any surface. It’s no bullshit. 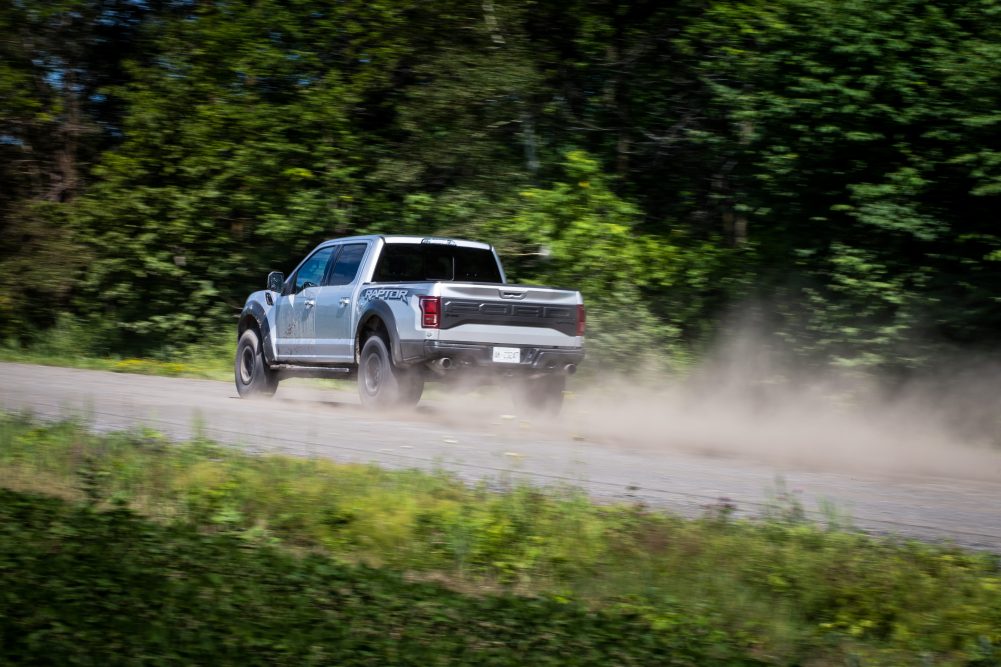 The performance this superhuman truck is capable of achieving is nothing short of extraordinary. Power comes from Ford’s now familiar 3.5-liter, Ecoboost, twin-turbo V6 – the same engine found in the Ford GT supercar. Power is rated at 450 horsepower and 510 lb-ft of torque, up 39 horsepower and 76 lb-ft over the previous 6.2-liter V8.

Completing the Raptor’s full battalion of go-fast goodies is Ford’s all-new ten-speed automatic transmission. The end result is a net improvement in fuel economy. With 13 L/100 of claimed combined driving, the Raptor is no Prius rival, but those numbers are superior than the model it replaces, in case buyers care. But I’m pretty sure they don’t. 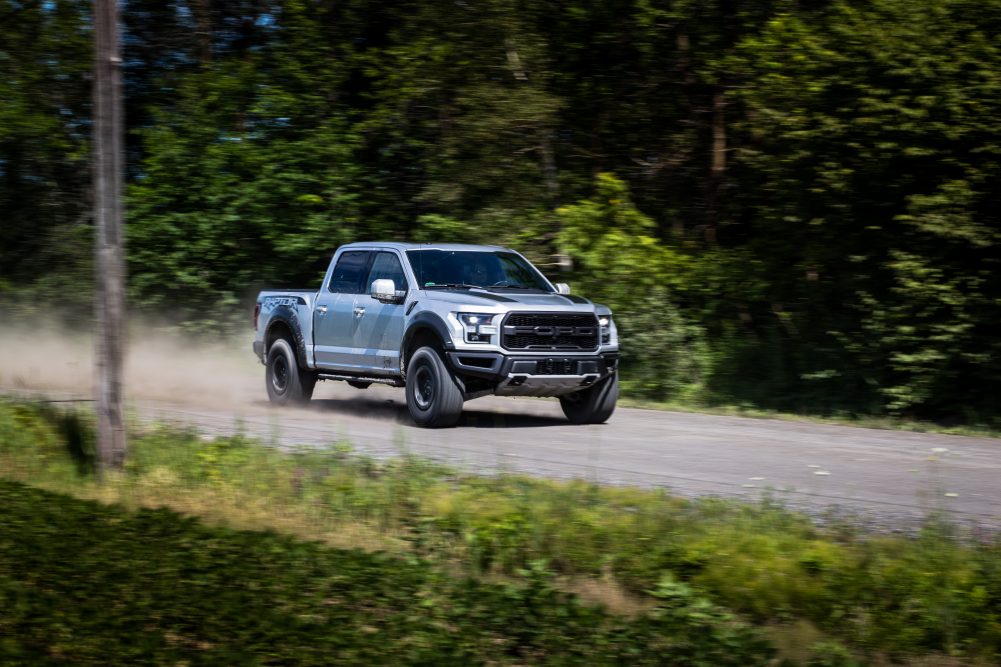 Acceleration from 0-100 km/h is claimed at 5.0 seconds flat, or roughly the same as a BMW 340i. All-wheel-drive is, of course, standard, with the possibility to lock the center differential.

Behind the wheel, that new drivetrain proved itself to being somewhat of an anomaly. Sure, the Raptor is fast, really fast, especially for a truck this size. But the alarming turbo lag and infuriating delay in the transmission’s reaction times resulted in more frustration than pleasure. Throttle response isn’t this Tonka’s tour de force. 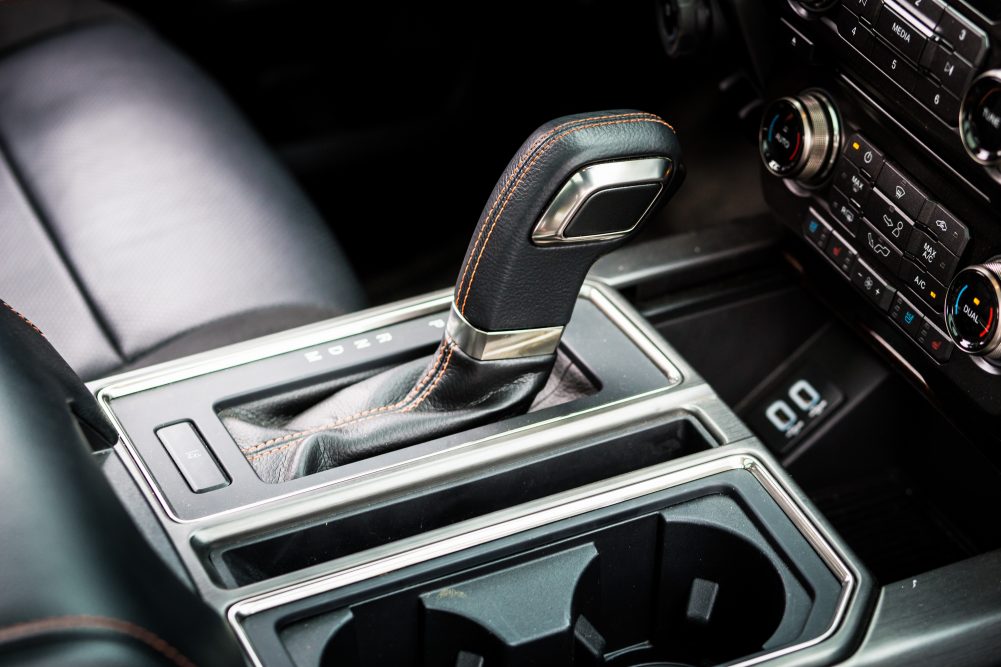 Stomp the accelerator pedal, and nothing happens. Allow boost to build up and give the gearbox some time to fiddle through its ten available cogs, then decide which is best for your needs, and the Raptor finally decides to haul ass, rear-end squeezed to the ground, hood raised in the air, entire body bobbing and weaving under the slightest road imperfections from the softer-than-average dampers, all accompanied by the intoxicating bellow of a synthesized engine note that attempts to duplicate the one of a big rig trailer van. 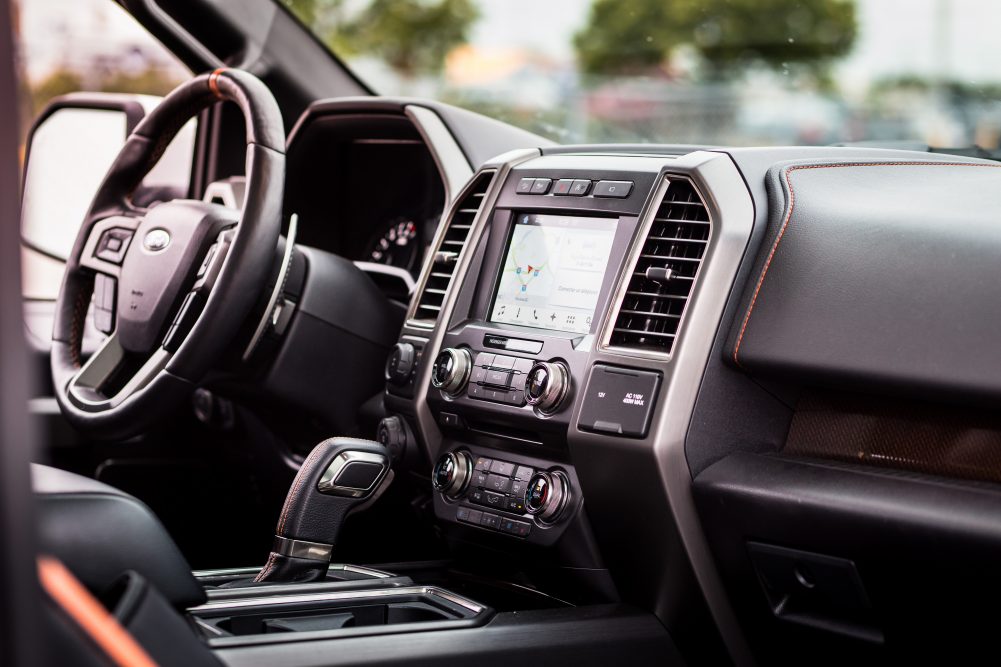 Is the Raptor fun to drive? Depends, so far, in the streets of Longueuil, the only challenge the Raptor faces are the undeniable pot-holes that plague Québec’s corrupted tarmac. That, the Raptor achieves like a champ. Handling is actually quick good considering its heft, and it will corner, as long as you’re willing to accept a fair bit of body roll. 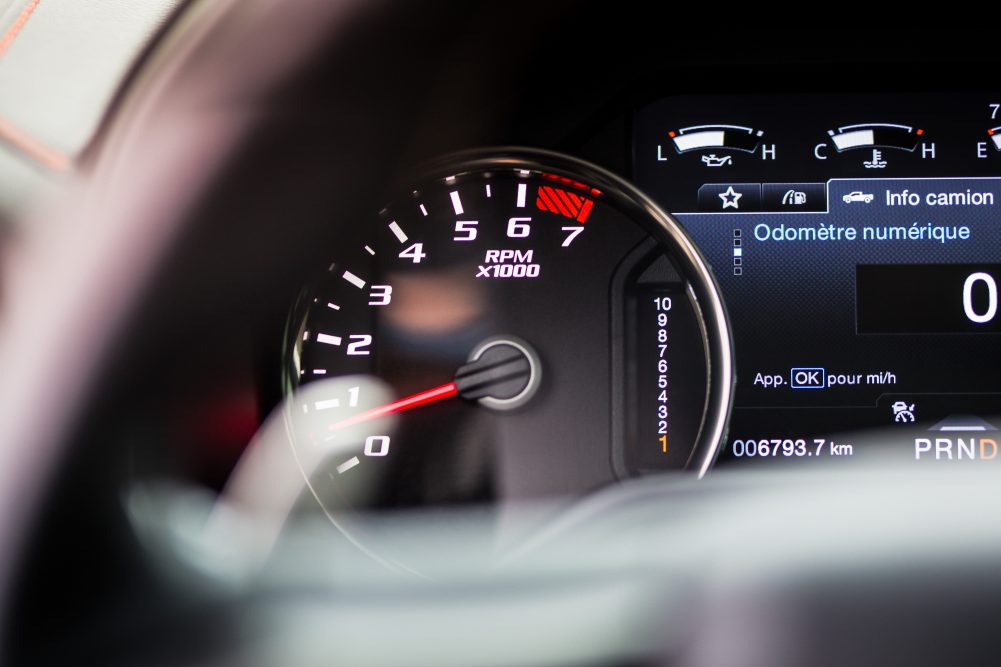 But when came the time to use the Raptor for everyday duties like grocery shopping, going to the gym, or squeeze it inside my home parking spot, it proved to be as useless as an intoxicated dullard. The damn thing is so wide, you’ll be afraid to park it next to any other car, forcing you to coast it at the furthest reaches of IKEA’s gargantuan parking lot. 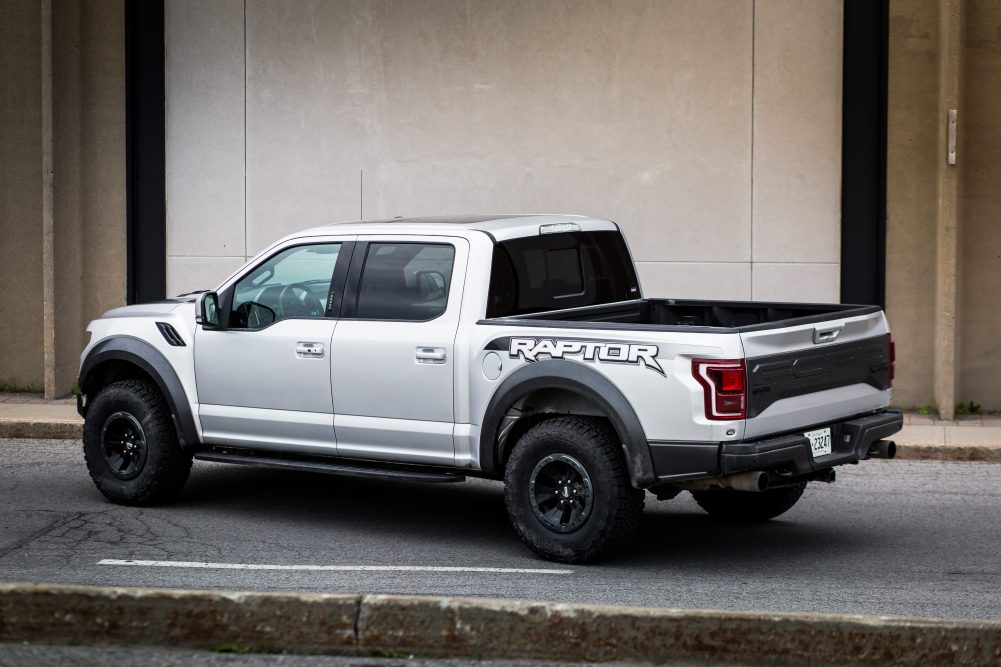 It was the moment that I scratched the bumper of the other press car I had that week with the ginormous Ford that I realized I was doing this all wrong. This big guy was suffering in Montréal’s urbania suburbs, and it needed to be let loose in the open to stretch its legs. 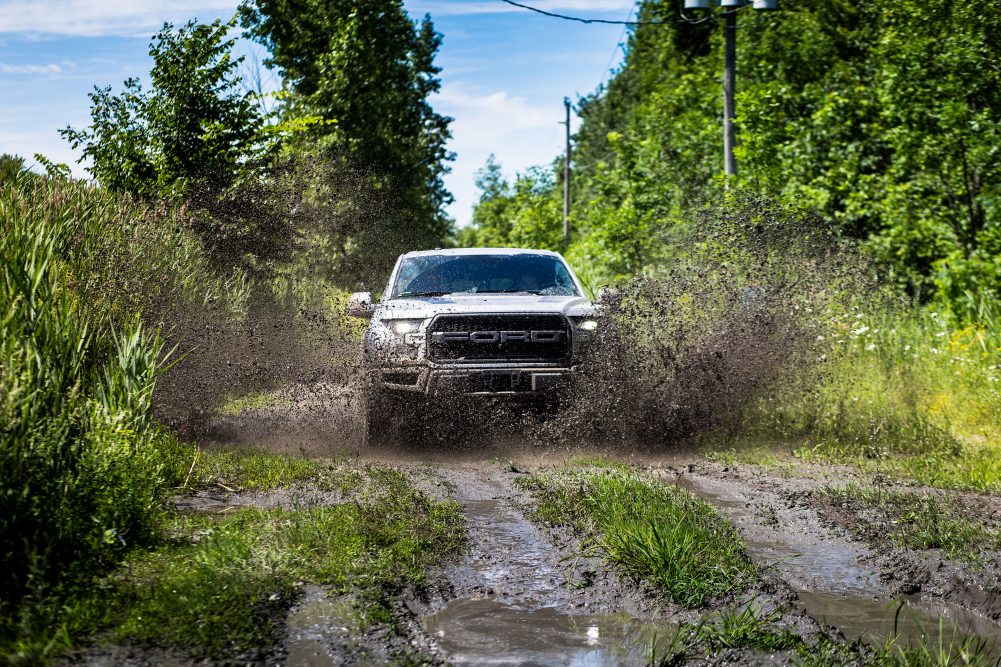 I know the Raptor’s main purpose is to plow through a desert at ultra-high speeds, but since there were no deserts in sight, I had to improvise by running the thing all out in a hole-filled dirt road. To nobody’s surprise, the Raptor gobbled up that piece of road as if it were a Rottweiler sitting in front of a pair of German sausages.  Feeling a bit disappointed that I hadn’t given it the workout it deserved, I decided to hit the more serious trails. 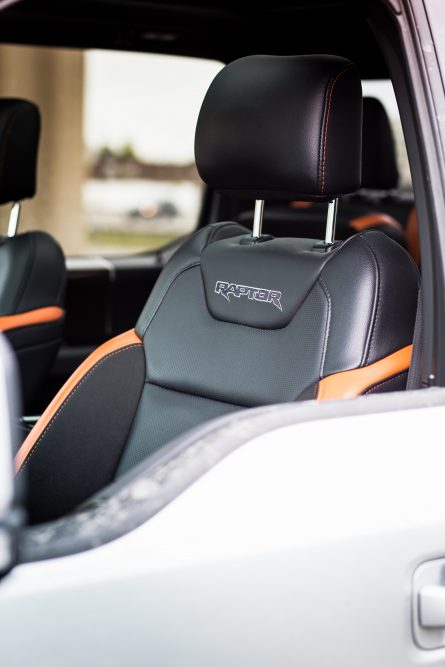 I’ll begin by admitting that I’m not an experienced offroader, so I was happy to be strapped comfortably inside the F-150’s massively comfortable and airy cabin, huge leather seats holding my meat carcass in place, climate control system blowing clean, fresh air on my sweaty face, with a few knobs and dials at my disposal to conquer whatever dared stand in my way. 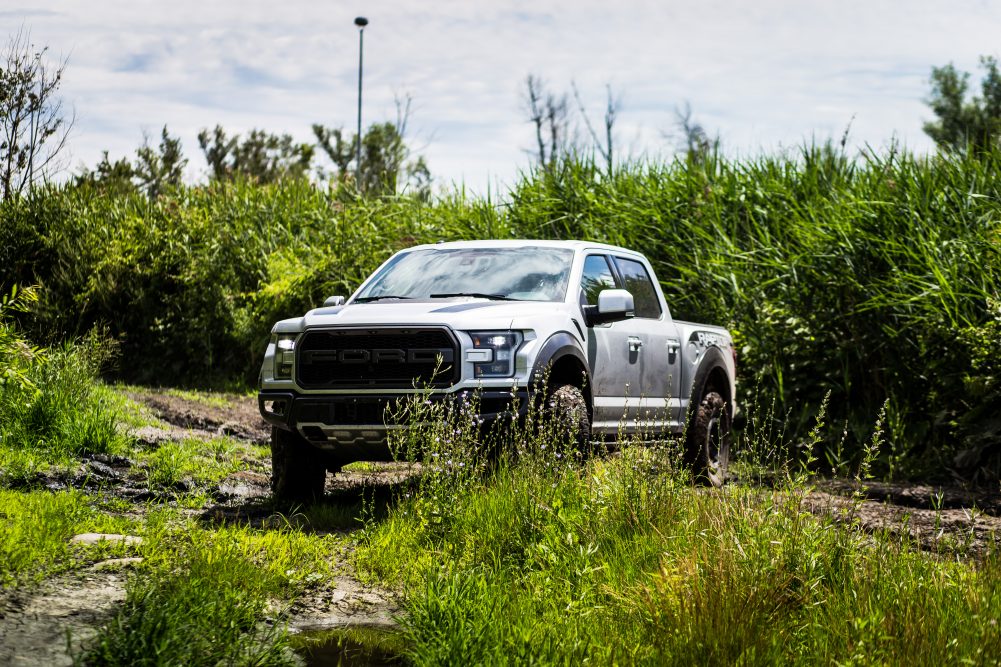 In the deep, muggy stuff, the Raptor’s ability to crawl impressed me by way of its various four-by-four settings. By default, the Raptor makes do with rear-wheel-drive, and yes, it is tail-happy, so if you dare fiddle with that throttle too much with traction control off, this sucker will wag its tail like the best Mustangs out there.

Four-by-four “Auto” automatically sends power to the front wheels when slippage is detected, kind of like what you get in a conventional AWD crossover. It’s ideal for when driving over slippery conditions, during winter for example, all while keeping fuel economy on point. That was an oxymoron by the way. 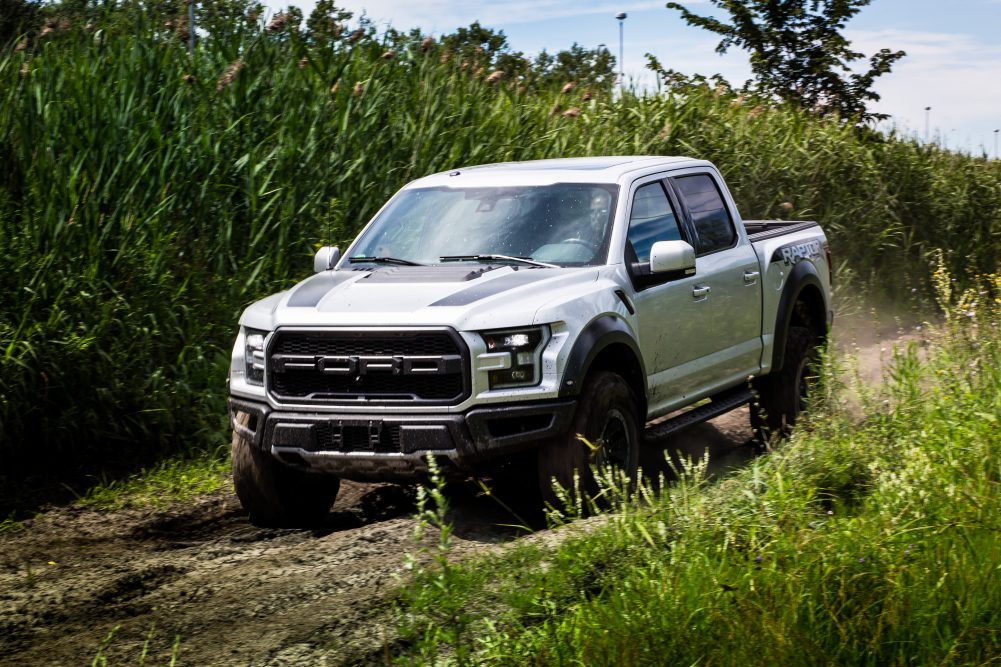 Because of the conditions in which I was driving the Raptor were somewhat more – ahem – professional, I was in need of a full differential lock application, and the Raptor delivered. Sure, the BF Goodrich KO2 tires fitted on this bad boy were designed for the sand, not thick oozing mud, but the fact that in no way I even came close to being stuck was a testament to the Raptor’s exemplary four-by-four system. 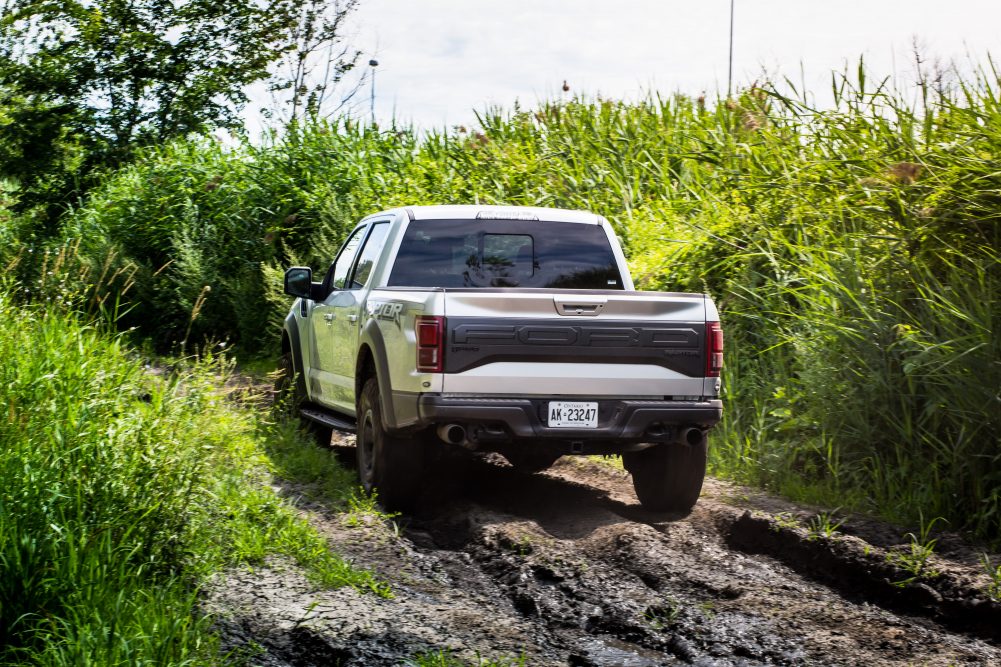 But the area where the Raptor impressed the most in the trails, was its ability to keep one wheel deep inside a three-foot mud hole, and another leveled on a solid bit of dirt. That’s all thanks to its near 14-inch of available wheel travel, something no production truck could have mustered. 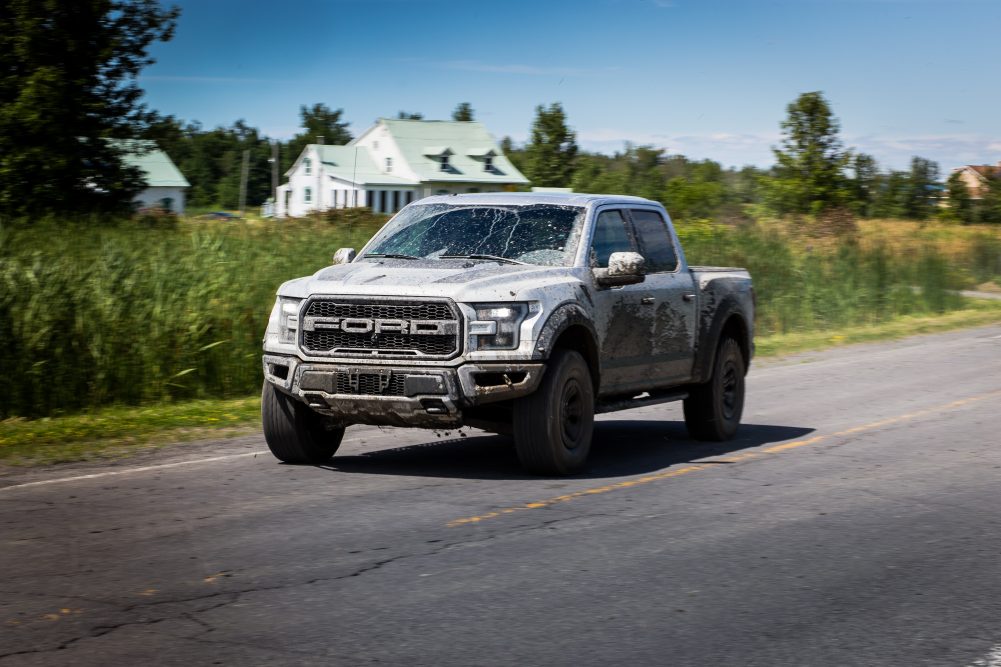 Essentially, what all of this means, is the Raptor plowed through the 2 km service road like a breeze. When my shooter Myle and I pulled out of the bushes on the other side, the entire truck was covered in mud, bugs, and for some unknown reason, the puke-inducing stench of sewage water. We, on the other hand, sat there, bathing in the F-150’s near Audi Q7 levels of comfort, shoes as white as a dove, wondering what we’d have for lunch. Nothing stops a Raptor. 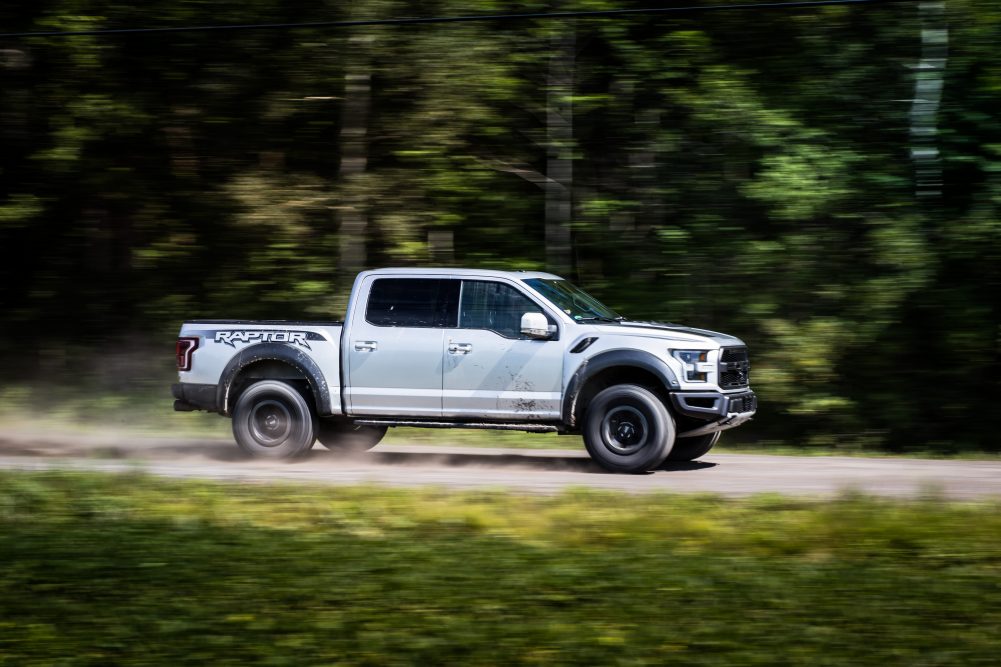 Pricing for the 2017 Ford F-150 Raptor is as extreme as the vehicle itself. A “base”, SuperCab model kicks off at $70,299. That’s a lofty amount, already towering other off-road ready rivals in the likes of the Toyota Tundra TRD Pro. But then, no other specialty truck will match the Raptor’s off-road cred. 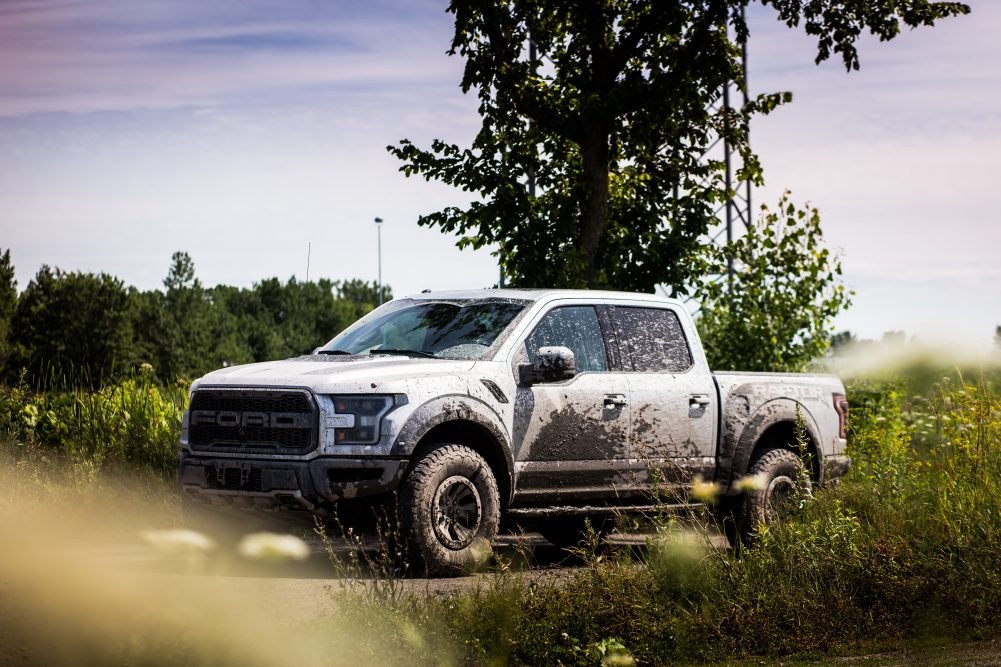 The problem with the Raptor’s price is when you start adding options. My tester, a SuperCrew model with added tech, some orange inserts in the cabin, and a few fancy stripes on the hood, stickered for $89,000. I’m sorry, but that’s insane for a pickup truck you can’t park in your own driveway. 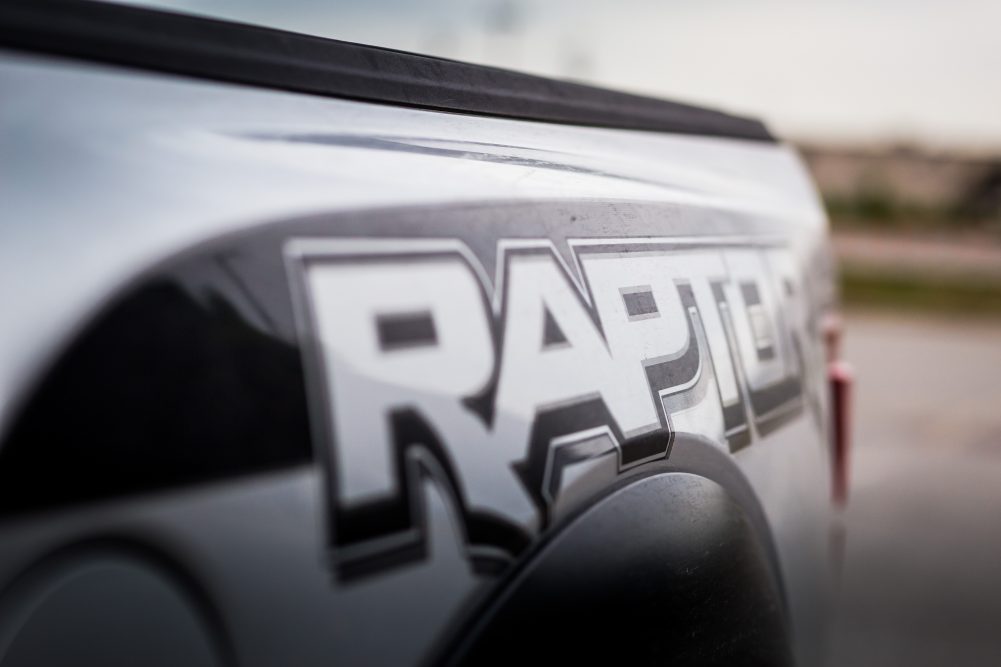 That all being said, allow me to bring you back to my initial existential question: who buys these things? Not mere mortals like you and me, that’s for sure.

The thing is, the Raptor is a specialized vehicle, like the track version of a high end sports car. Do you see anyone complaining over the fact that a Porsche 911 GT3 RS comes fitted with super slick tires from the factory, destroys your spine over potholes and sells for over $200,000? No. Because the people that can afford one don’t give a crap. They bought it for the performance it delivers on the track. And the Raptor is the exact same thing. It’s the 911 GT3 RS of trucks.