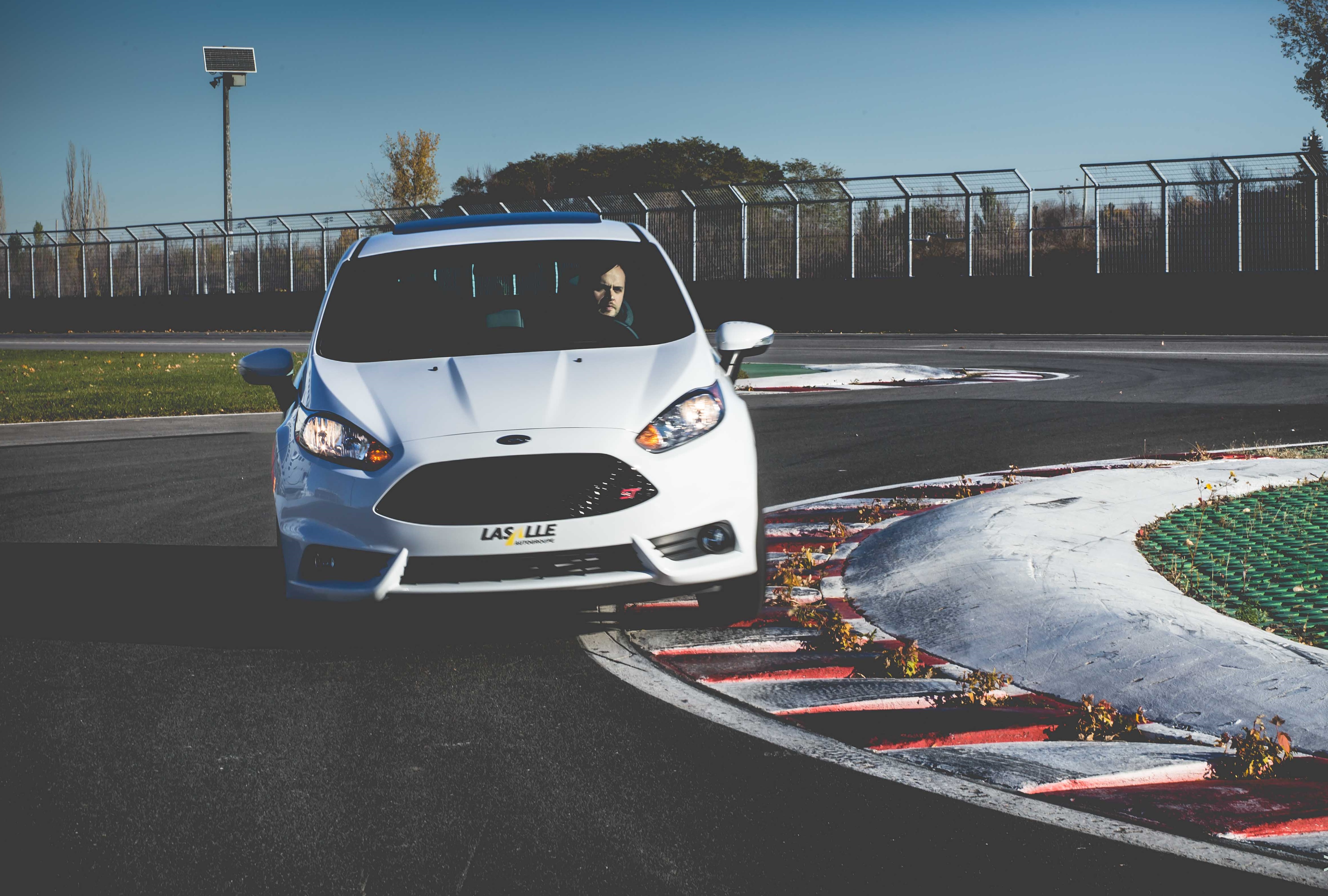 I’ll be honest. I knew I would like this car before driving it. Because ever since its launch, automotive journalists from all over the world have been going crazy over Ford’s little egg-shaped, giant-slayin’, feel that boost?, pocket rocket.

Some even dared to compare it to a freakin E46 BMW M3.

Matt Farah, I appologize for trolling your video.

Truth be told, as automotive journalists, we do our best to come out with the most original content possible. The last thing we want to do is say the same thing everyone else is saying about a car. So, you can imagine then, that I wanted to hate the Fiesta ST and give it a bad review. 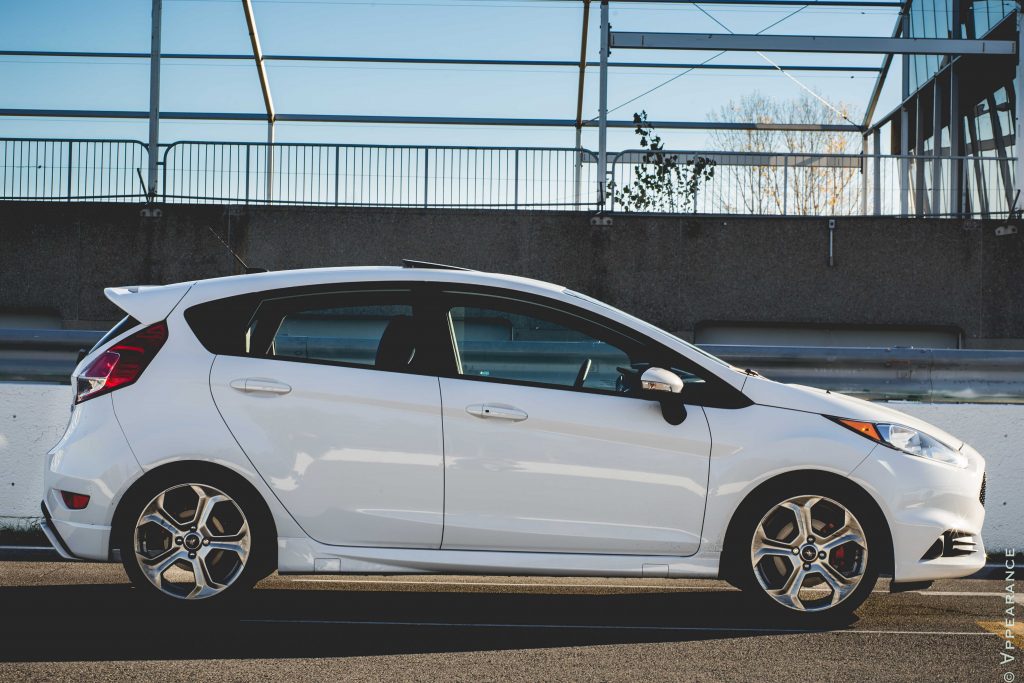 It sounds like it’s yelling “bruh” all the time.

What an appropriate sound for a car that is essentially a bro on four wheels. Although amplified by a sound symposer, which, unlike BMW’s stupid electronic engine sound simulation system, is an actual amplification of the engine’s decibals through what is essentially a giant tube, the Fiesta ST’s 1.6-liter, turbocharged, 4-cylinder, EcoBoost engine develops way more power than this little hatch should handle – 197-hp and 202 lb/ft of torque. 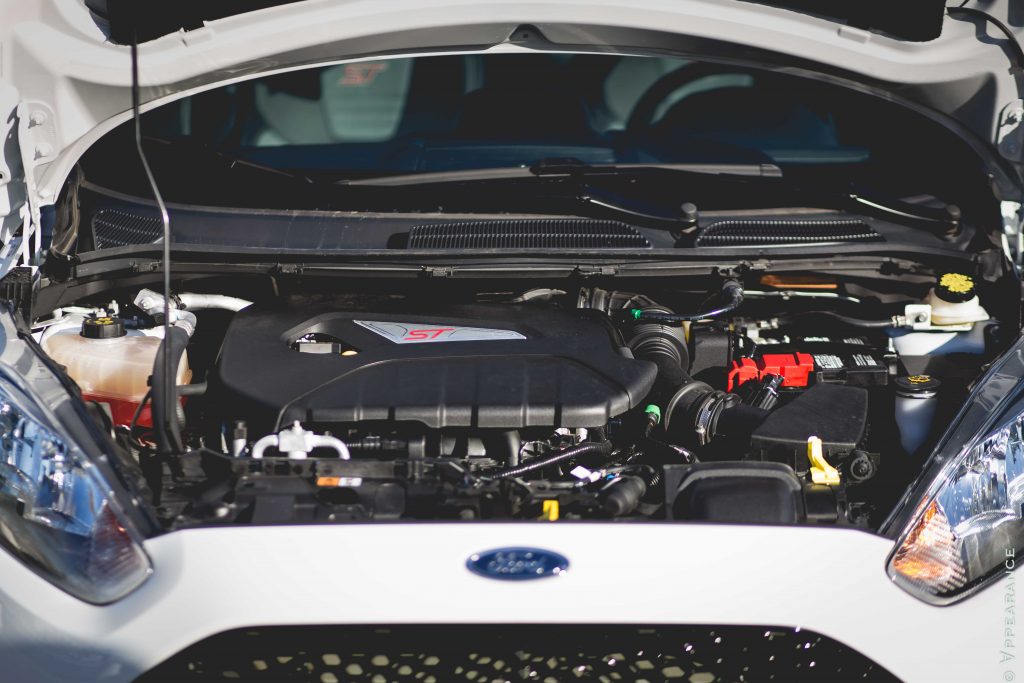 So much power in fact that no matter which gear you’re in, how many bros are sitting in the car, or how steep the hill in front of you is, this little snot of a car flies like a bee out of hell.

Very much like its big brother, the Focus ST, the Fiesta’s engine is fitted with a rather tiny turbocharger, so boost comes on low in the powerband, quickly delivering linear power that remains constant all the way to redline. It’s a suprisingly rev-happy mill, redlining to 6,500 rpm, and exhibiting no unexpected power surges like you get in a Fiat 500 Abarth for example.

And there’s an overboost feature. Normally pushing 18.9 psi of boost, when flooring the throttle between 2,500 and 4,000 rpm, the turbo cranks up the boost to 21 psi for about 20 seconds or so, allowing the little mill to churn out its promised 197 horsepower.

Without overboost on, the Fiesta ST cranks out 180 hp, but you don’t really notice the gap. All you notice is how fast you’re going. 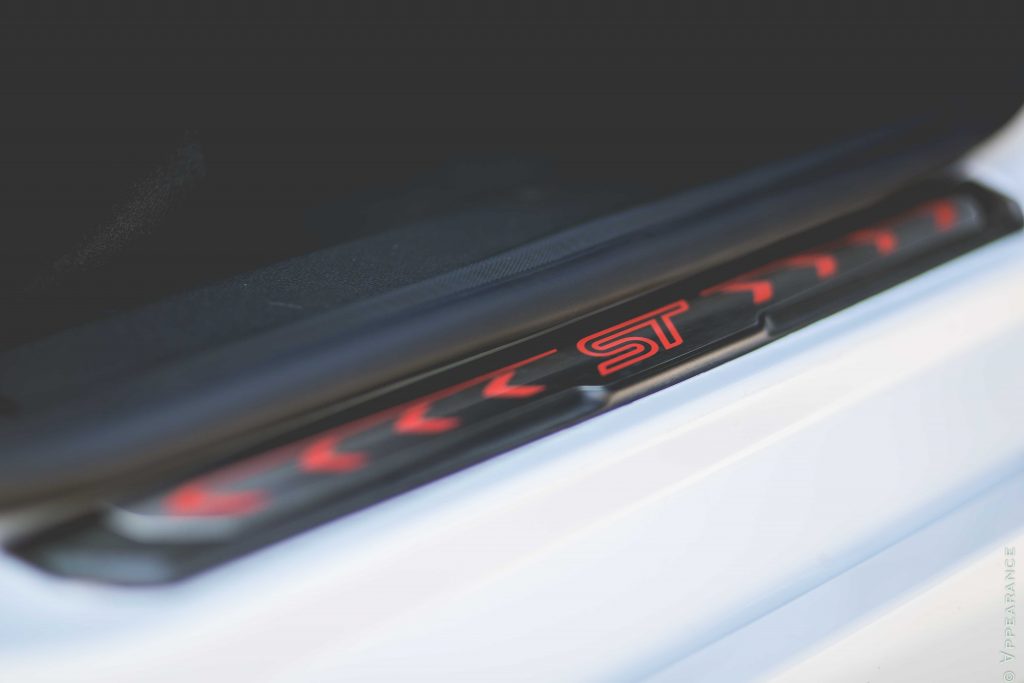 Combine all of this with a light clutch, perfectly well-placed pedals, a slick-shifting, 6-speed manual gearbox, and a small tossable chassis, and this little econobox suddenly becomes a seriously entertaining package. Turn off traction control, accelerate hard from a standstill and the low profile Potenzas will peel off some rubber in first and second gear, exhibiting little to no torque steer. 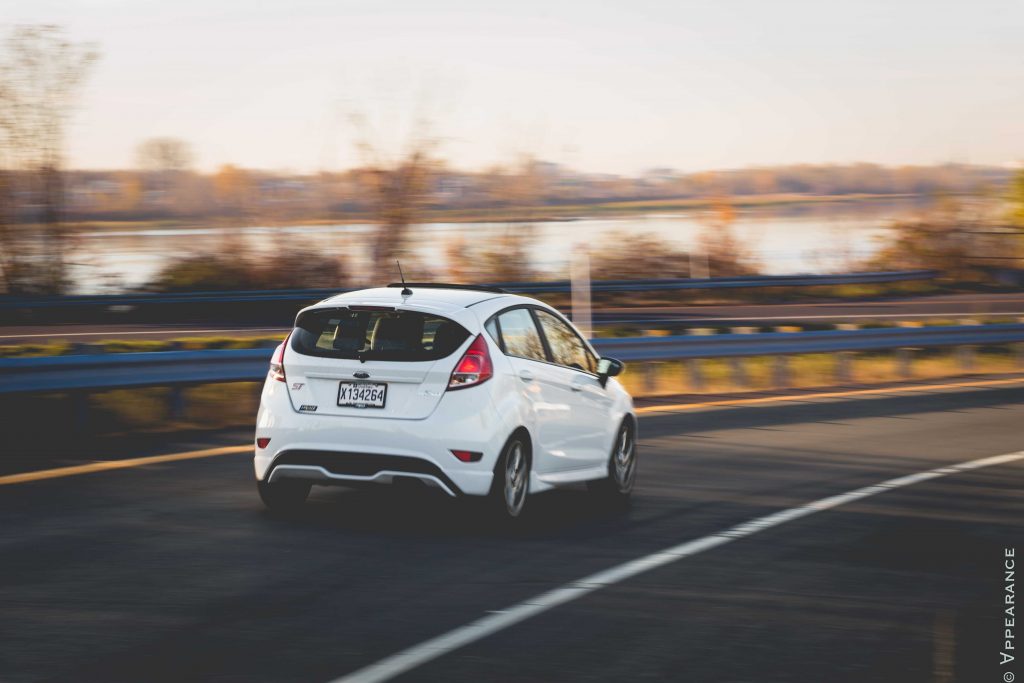 Unlike the Focus, which makes due with an independent rear suspension, the Fiesta still uses a good old torsion beam setup to save costs. This means that yes, when you throw this car hard into a bend, chances are you’ll end up on three wheels, like a tripod.

And boy is that fun.

There’s an overly exciting feeling about the way the Fiesta handles. While the Focus offers a much more planted and authoritative driving experience, the Fiesta is a complete circus of excitement. I never once asked myself if I was pushing this car too hard. In every bend, I could keep on pushing harder and harder. Yes, the rear keeps lifting and wiggling about, but that front end remains planted, allowing the driver to enter corners at mind-blowing speeds (for a Fiesta) in total confidence. If it understeers, just fiddle with the throttle, that little rear bounces up, and voilà, you’re back on track.

It’s just…pffff…Jesus this thing is fun to drive. 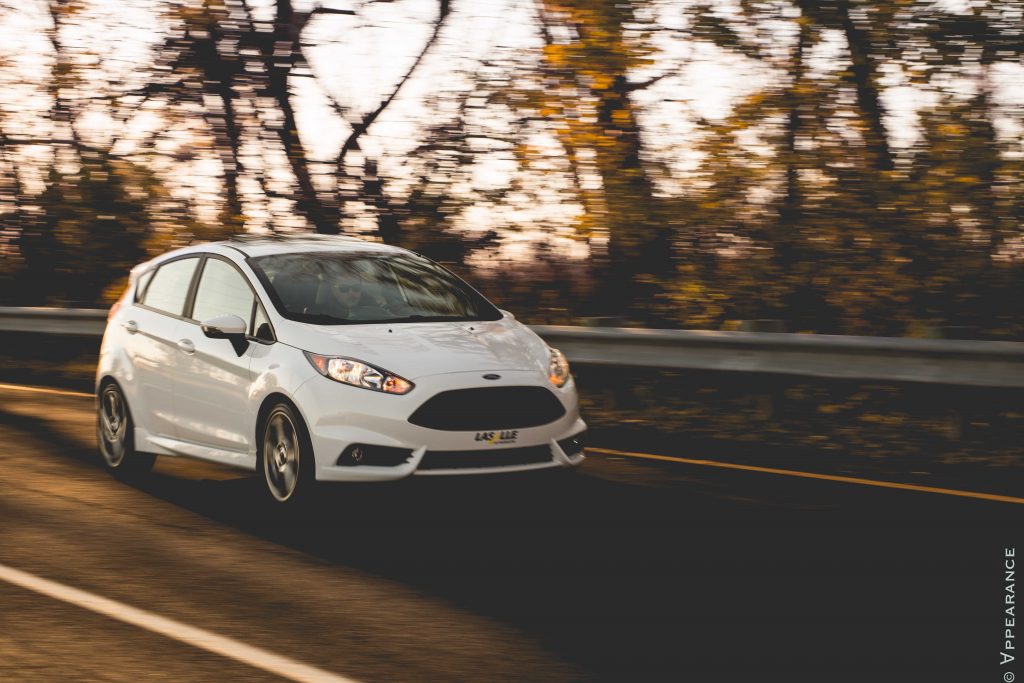 Brakes are big brawny pieces that bite with authority, never did I feel any sort of fade. Steering is precise and response is lightening quick, yet remains extremely vague in road feel.

There’s just no feedback from what the front wheels are doing.

It’s a stiff ride this car. Not to the point to crush your spine, but remains rather bouncy on rough surfaces. And in Quebec, we know a thing or two about rough surfaces. Nevertheless, even with the lowered stance and stiffened up suspension, the ST retains much of the regular Fiesta’s all around drivability and remains a great every day car. 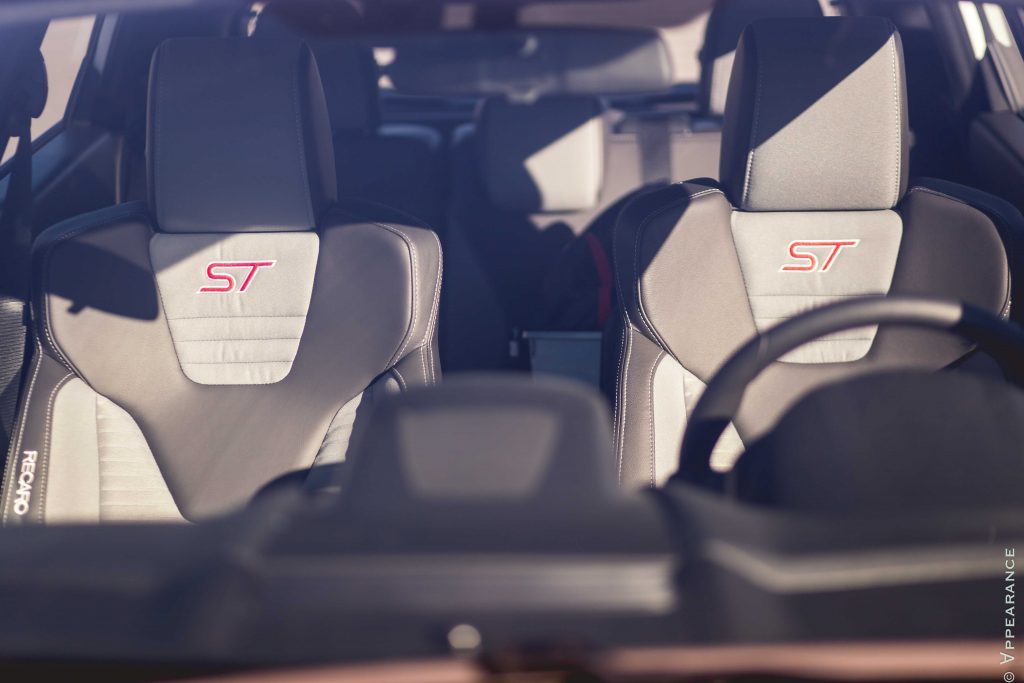 The Fiesta ST comes standard with a pair of seriously bitchin’ Recaro sports seats. I must admit, they’re some of the most attractive seats I’ve seen in a production car. They’re aggressively bolstered, offer plenty of support, and definitely add to the car’s overall driving enjoyment.

Yet, at the same time, the seats are one of the Fiesta’s biggest flaws. 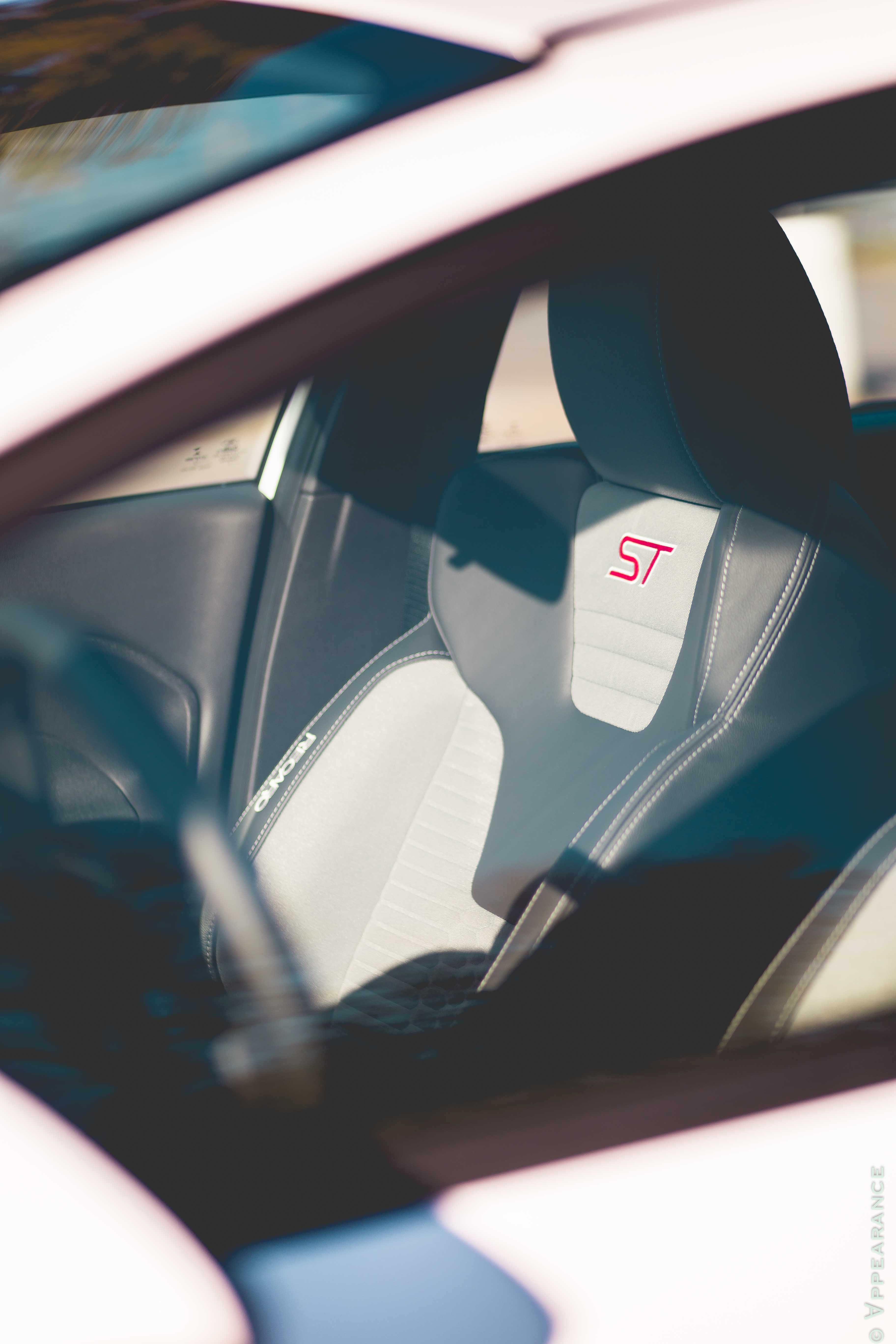 In the everyday world, as in, “I’ll head down to the Eastern Townships to go see some bros” real world, the Recaros frankly become rather annoying.

For some reason, after driving the ST for an hour or so, I was getting weird neck and back aches. I even pulled over during my roadtrip because I was fed up from not being able to move around in the seats.

Don’t get me wrong, I get the Recaros. The Fiesta ST is a true performance-oriented car, and on the track, I assure you, I was more than happy to have them sport seats.

But for a long trip, I’m sorry, they tend to beat you up. 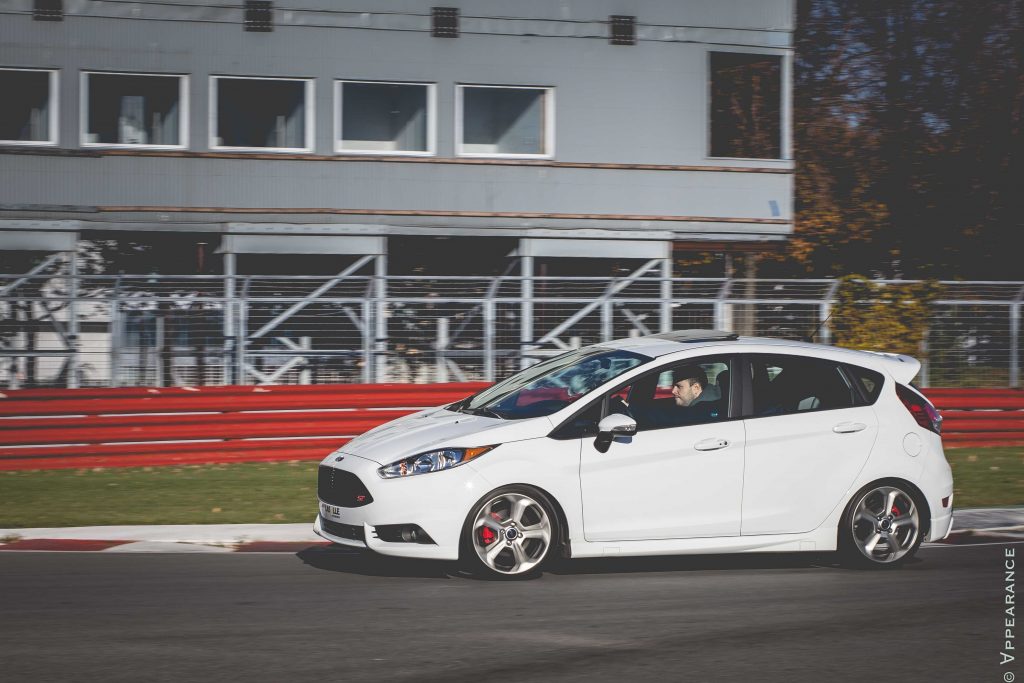 Believe the hype, the Fiesta ST is a stellar performance car in every respect, this thing is a blast to drive.

But it’s not perfect.

There’s a slight problem with the way this car looks.

I won’t say the Fiesta is an ugly car, far from it. It’s a rather cute and well executed sub-compact, one of the most attractive cheap cars available today.

But with the ST, the problem is that it’s no longer a cheap car. Granted, you do get more performance for your dollar than any other vehicle on the market, but it still costs $27,049. 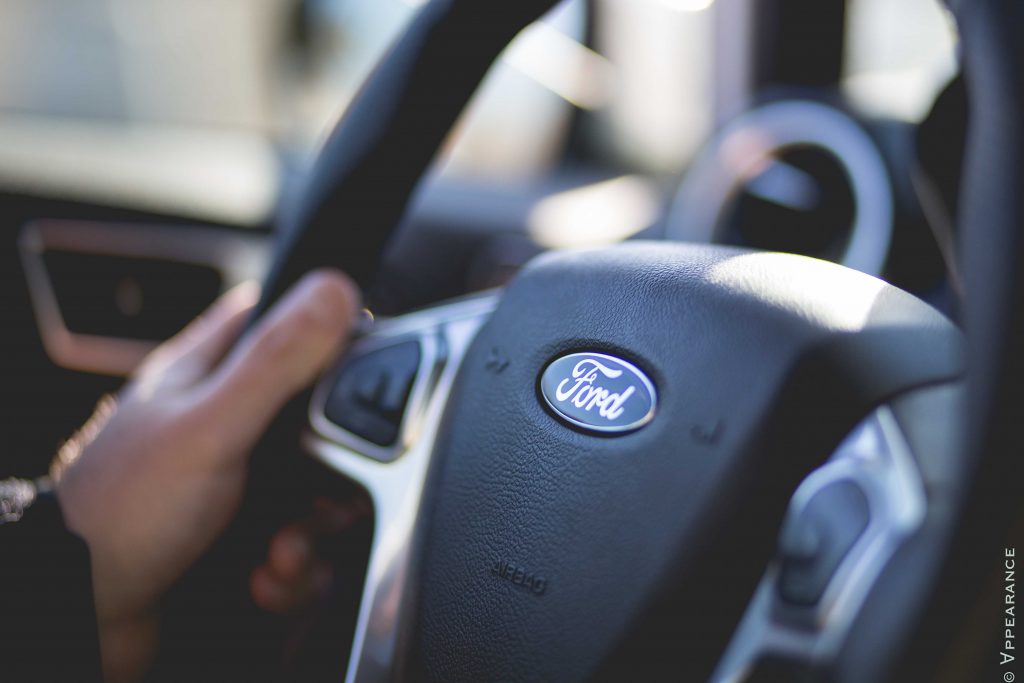 That’s $1,000 short of a Honda Accord Sport or the same price as a Subaru BRZ for that matter. And no matter how lowered the Fiesta is, how red the brakes are, or how long the spoiler is, you’re still sitting in what looks like a cheap economy car.

Also, my second, and only other gripe with the Fiesta ST, is in the interior ergonomics. Simple operations such as turning on the windshield wipers or unlocking the doors aren’t exactly what you would call intuitive. Since when do you push the stalk upwards to activate the wipers? Why aren’t the door lock/unlock buttons located on the doors? How do I turn on the foglights? Why are there two different defrost bottons? Etc, etc.

Yes, once you’ve understood how the controls work, everything operates flawlessly, but Ford should take a lesson or two from some of its Japanese competitors for ergonomic common sense.

Does It Eclipse The Focus ST? 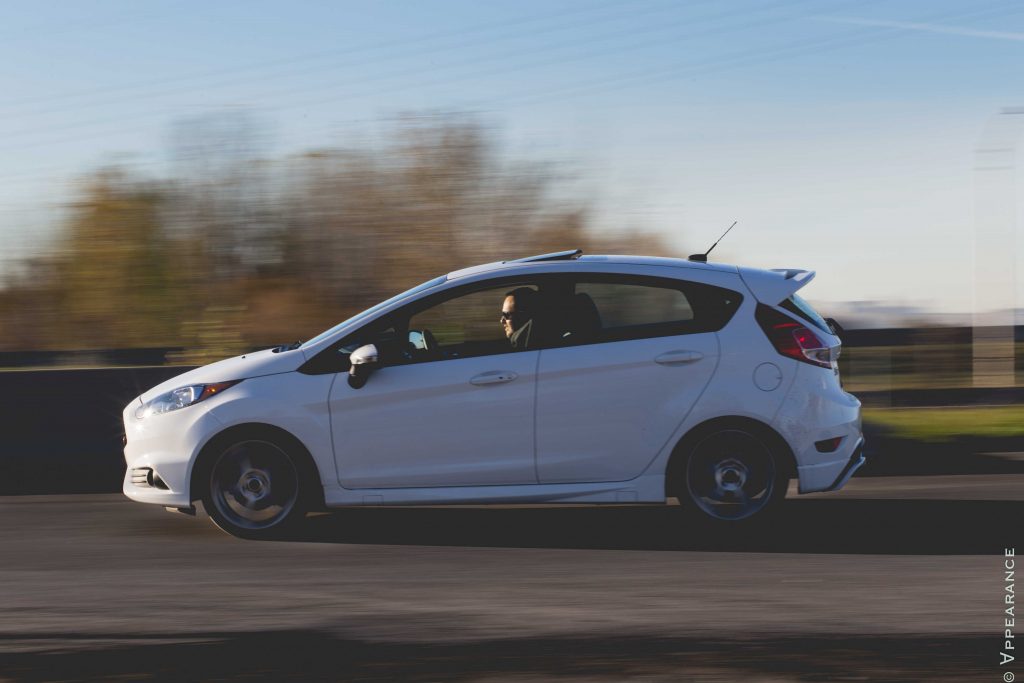 Ford these days is basically building the cars we’re all asking for, because they’re the carmaker with the biggest balls at the moment.

And that makes any car junky smile. In fact, the Fiesta ST is so good, that many have wondered why Ford even bother selling a Focus ST, that the Fiesta has made it irrelevent, because it essentially takes all the fun traits from its big brother and wraps them up in a tighter, smaller, nimbler, and more affordable package. 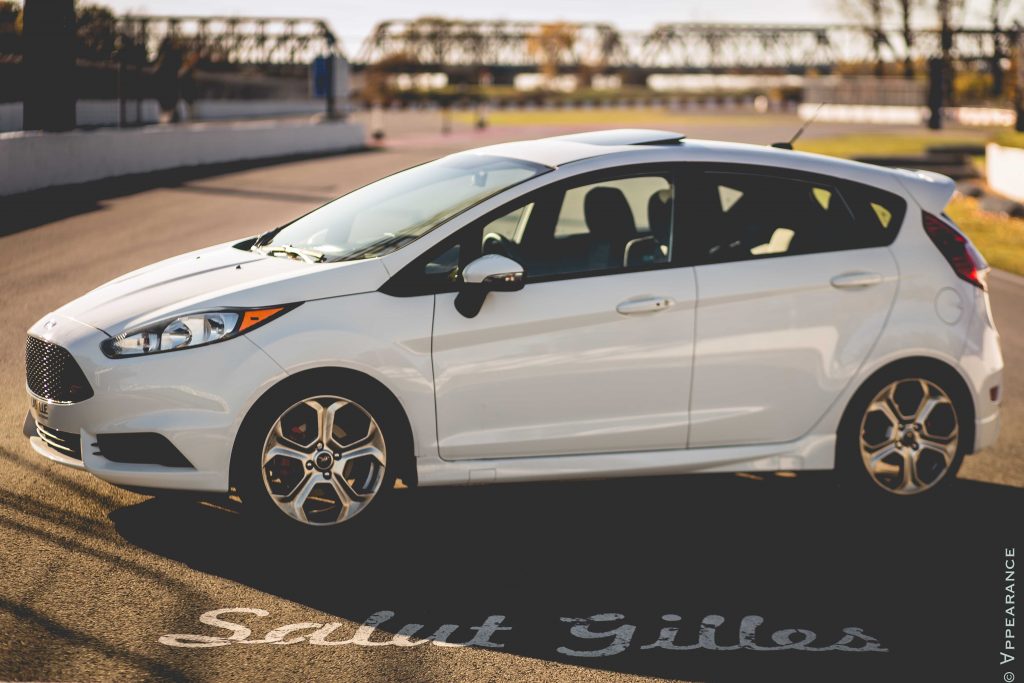 But it still doesn’t eclipse the Focus. The Focus is a much more competent machine in every way. It offers more power, handling limits are much higher, and, most importantly, is much more spacious, something the Fiesta can’t brag about.

The Fiesta ST’s ace up its sleeve though is that there’s absolutely nothing on the market that matches its performance potential in this price bracket. Its only real competitor in the micro hot hatch segment is the Fiat 500 Abarth, which, as I pointed in my review of that car, simply isn’t on par with Ford’s offering.

That being said, this little fire hatch’s mix of practicality, liveability, affordability, and over the top performance makes it the best performance bargain on the market today. Yes, I may have expected to like this car before driving it, but I didn’t expect to not want to give back the keys after my test drive. It’s that good.

So good in fact, that I might actually go out and buy one.

Review of the 2016 Ford Fiesta ST by William Clavey

+
+ A lot of performance for the price.
+ Plenty of power and torque across entire rev range.
+ Stellar handling and extremely playful.

–
– A rather tiny car for the price.
– Interior ergonomics need to be improved.
– Recaro seats beat you up on long trips.