2020 Honda Accord Is Still The Benchmark In Its Class 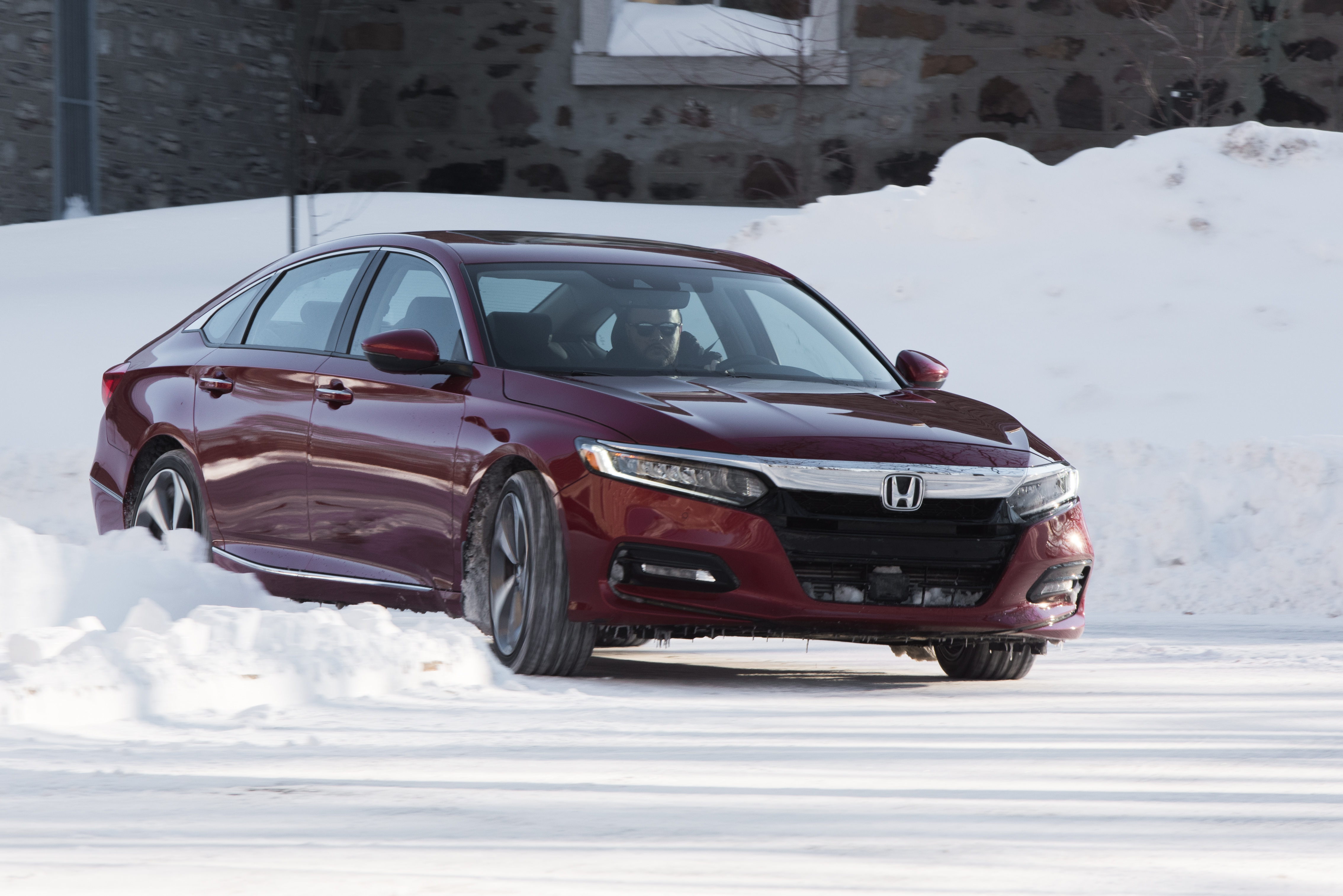 It felt good to get behind the wheel of the 2020 Honda Accord after driving newer sedans and SUVs. Actually. the car you see here isn’t a 2020, but rather a 2019 Honda Accord. But since I drove this in 2020 and because the car isn’t changing much this year, I preferred keeping things simple by calling it a 2020 Honda Accord.

Anyway, it’s still good guys, even if it still looks kind of weird and its 1.5-liter turbo engine was plagued with some oil issues. These minor caveats aside, the Accord still shows the entire industry how to build a good mainstream midsize sedan. 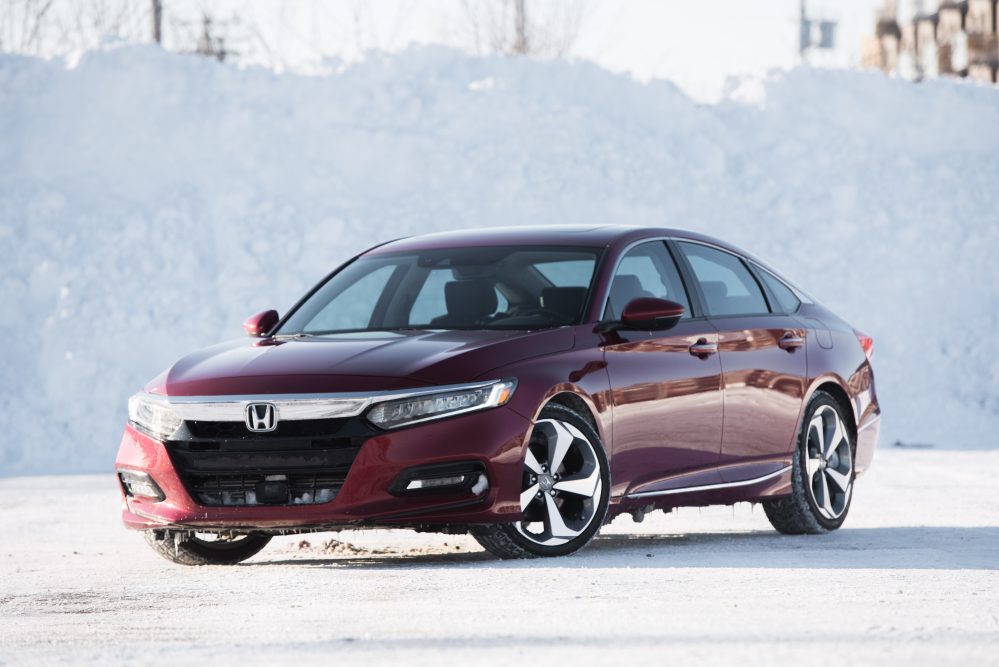 Honda was a little late to the chrome removing fab. Chrome is out now, and I’m sure Honda hates itself for not catching onto that when releasing this tenth generation car back in 2018. Honda’s midsizer should receive a facelift in 2021.  Let’s hope it gets rid of the stuff, especially the one covering the car’s enormous forehead that sticks out over the car’s huge grille. 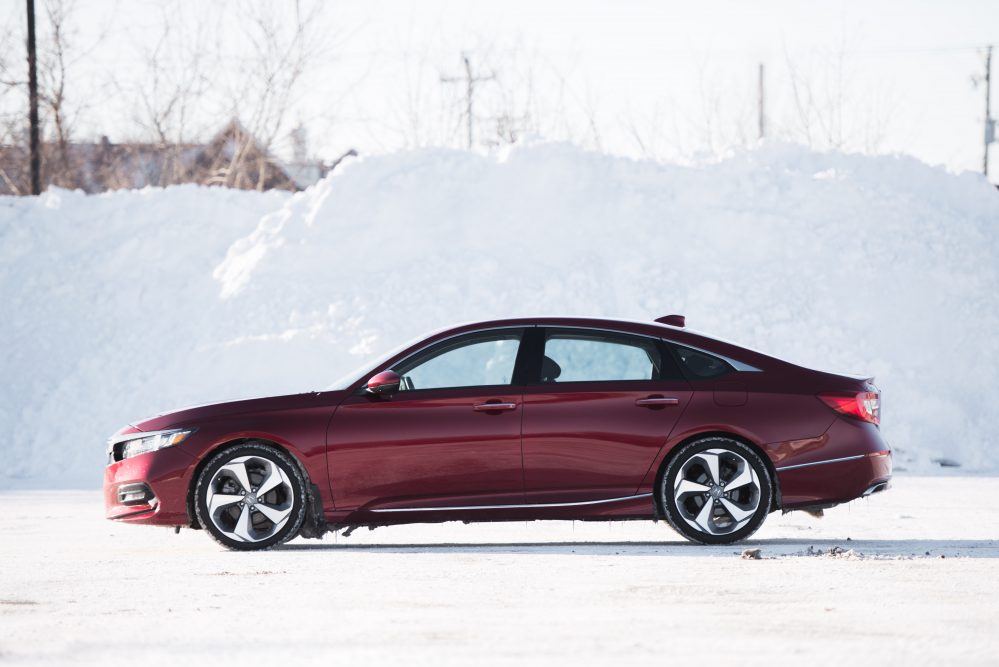 Weird looks aside, you buy an Accord first and foremost because of its solid bones and for the way it drives. In that respect this current-generation car fulfills exactly what an Accord should do. It’s oozing with substance and value. 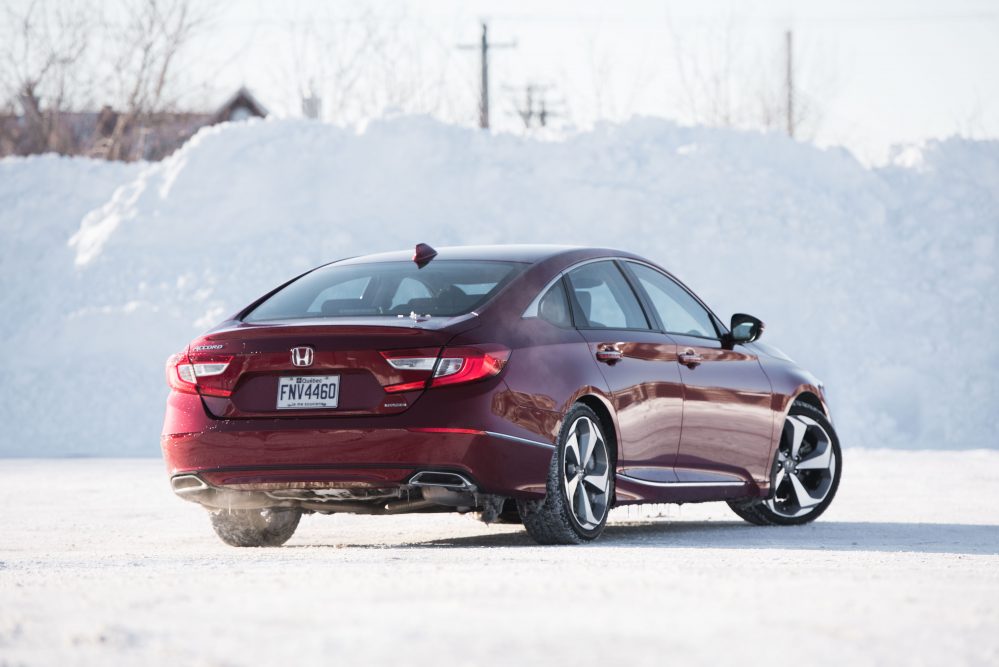 I’ll quickly address the 1.5-turbo engine’s biggest weakness: it has a reputation of mixing oil with gasoline, a problem which has deeply hindered the reputation of Honda engines for being indestructible. Honda is however aware of the issue and has ordered warranty covered fixes for all impacted owners. 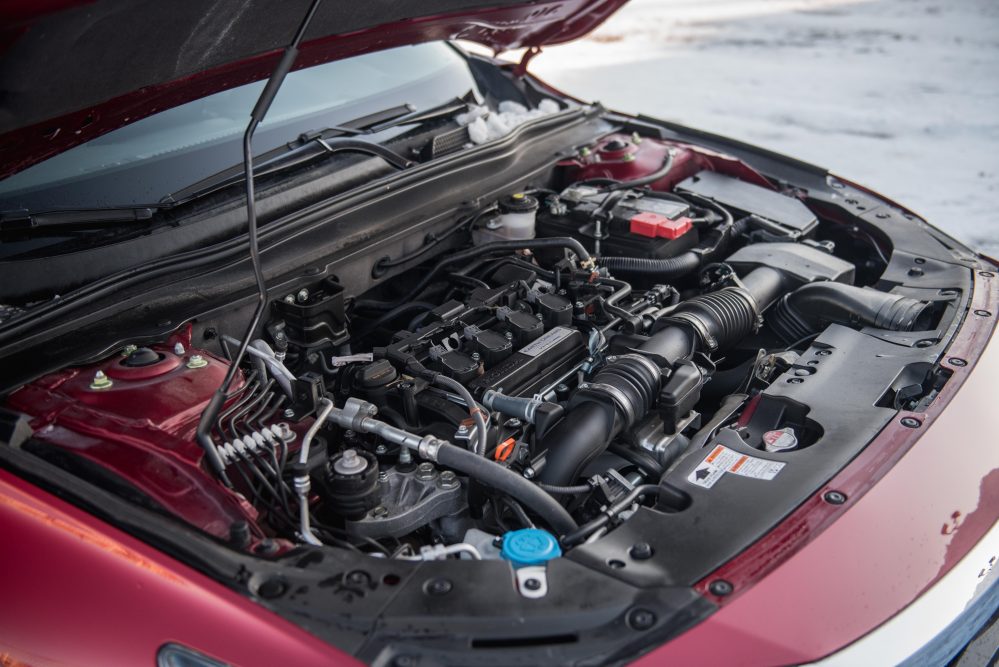 If you want no issues at all from your Accord, I recommend jumping straight to the 252-horsepower 2.0-liter turbo. Sure, it’ll be more expensive, but you’ll also be getting a significant bump in performance, all while keeping the trusted Honda dependability score intact. 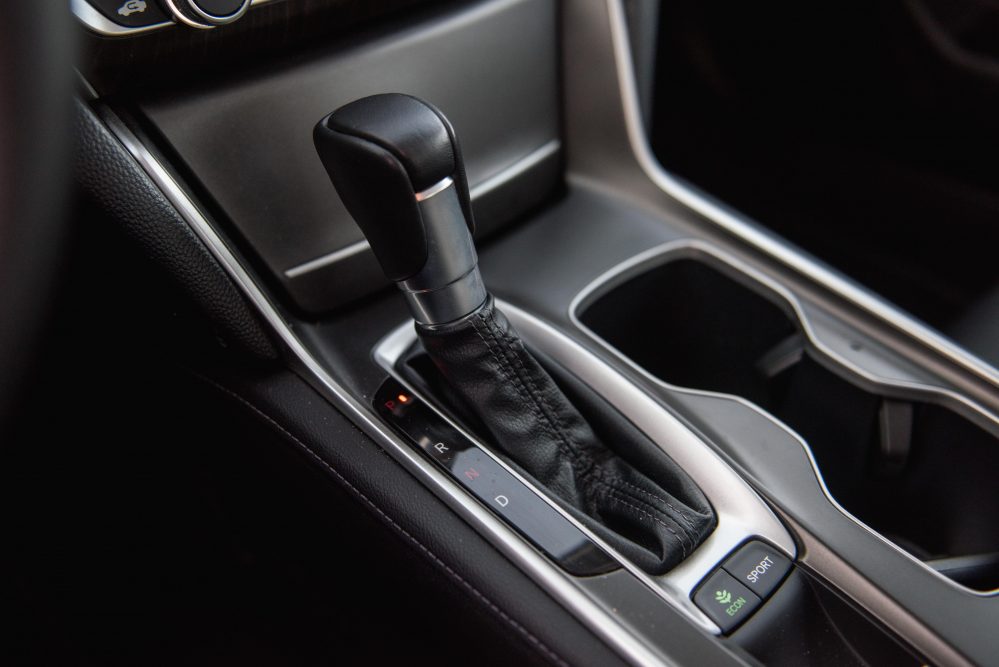 Still though, the 1.5T isn’t a bad engine. I personally love it in everything it powers, from the standard Civic sedan, to the CRV. It’s a smooth, energetic and punchy turbo mill only Honda could have engineered. And even though the Accord offers a six-speed manual gearbox for both its engines – another argument in its favor -, the CVT gearbox ain’t bad neither. You’re hearing that from a dude who prefers having three pedals in any car. 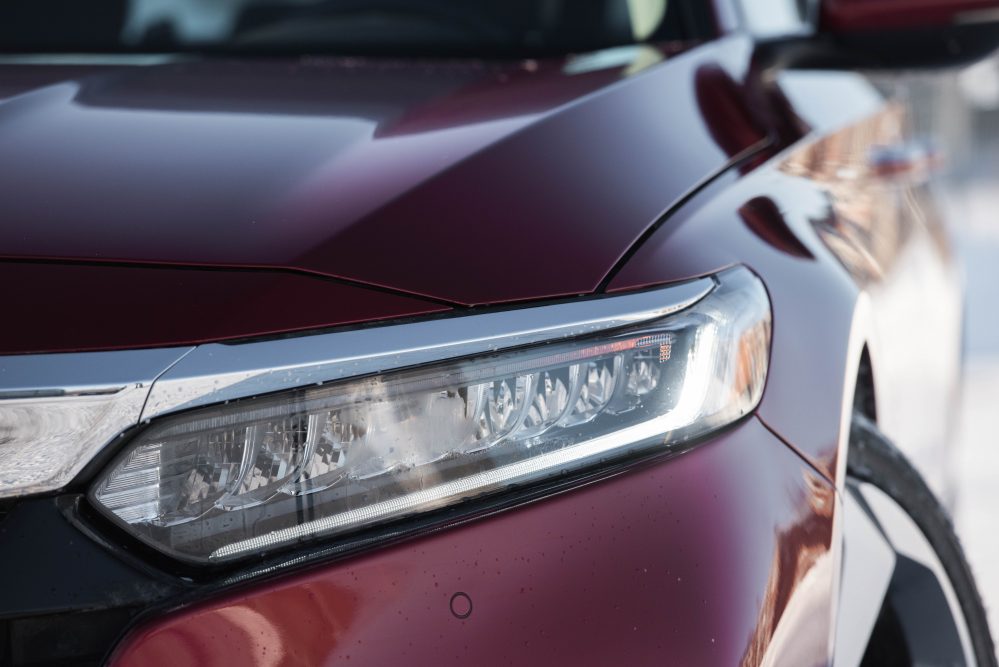 The thing is, Honda, also a manufacture of motorcyles and ATVs, understands a thing or two about continuously variable transmissions. It also knows how to make them fun, something it achieves amazingly well in the Accord. 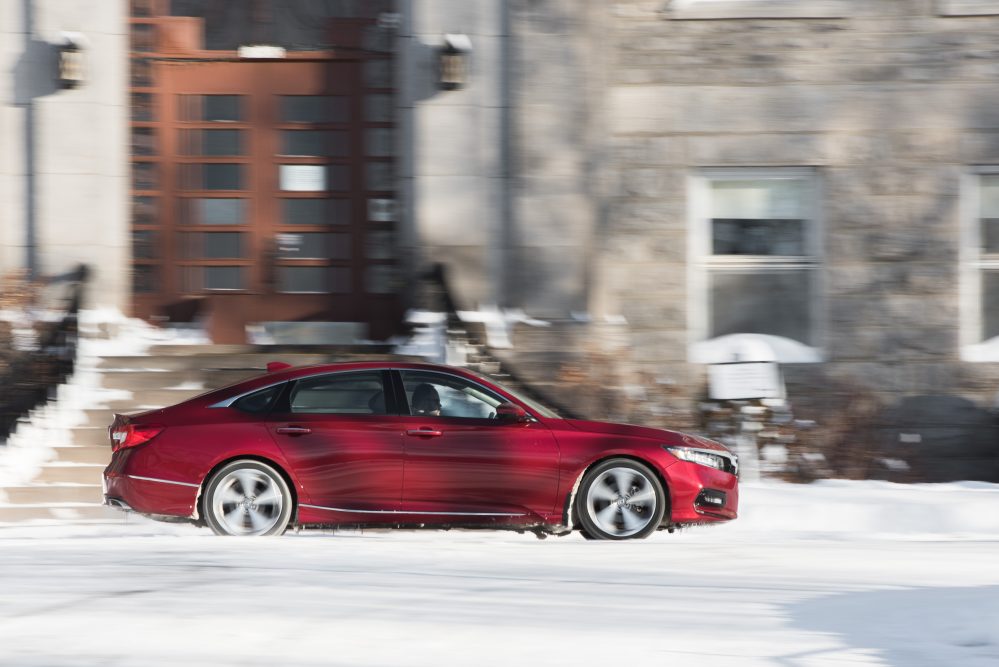 Power from this engine is rated at 192 horsepower and 192 lb-ft of torque, allowing it to sprint from a standstill in a respectable 6.7 seconds. Remember, this is the base engine for the Accord. Only the hybrid is slower. 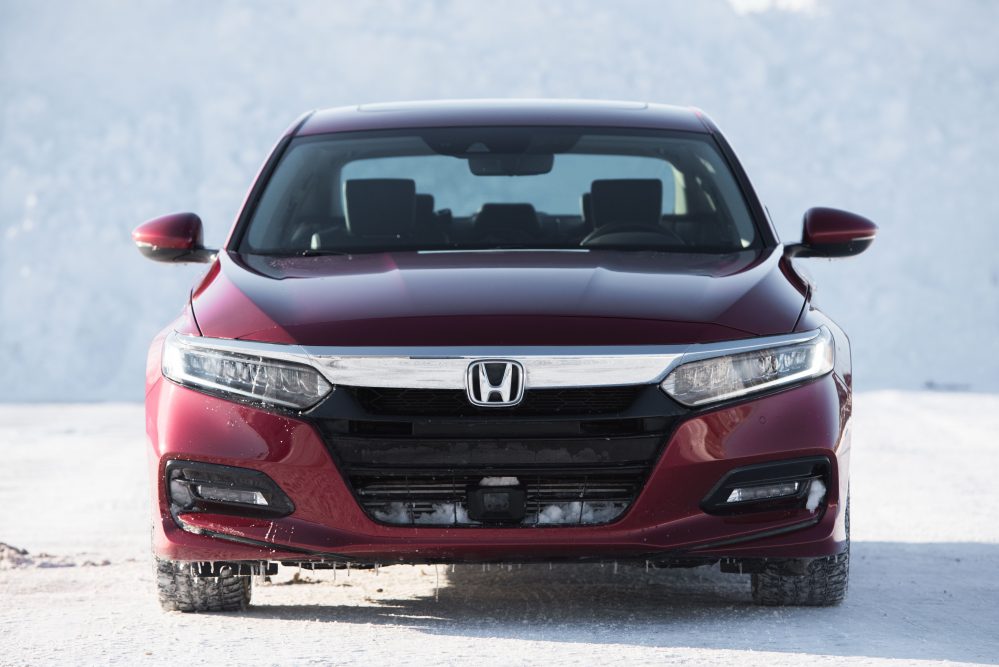 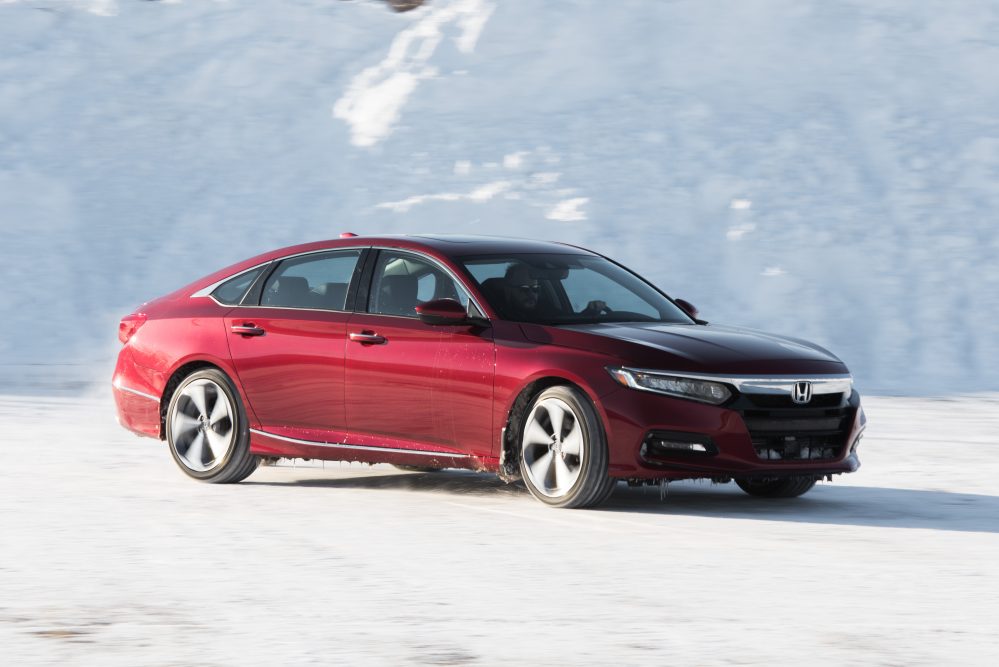 While contenders have tried to squish the Accord with standard all-wheel-drive (Altima) and funky styling (Sonata), the Accord stands unbridled by its new rivals mostly because of the man/machine harmony it provides its driver. 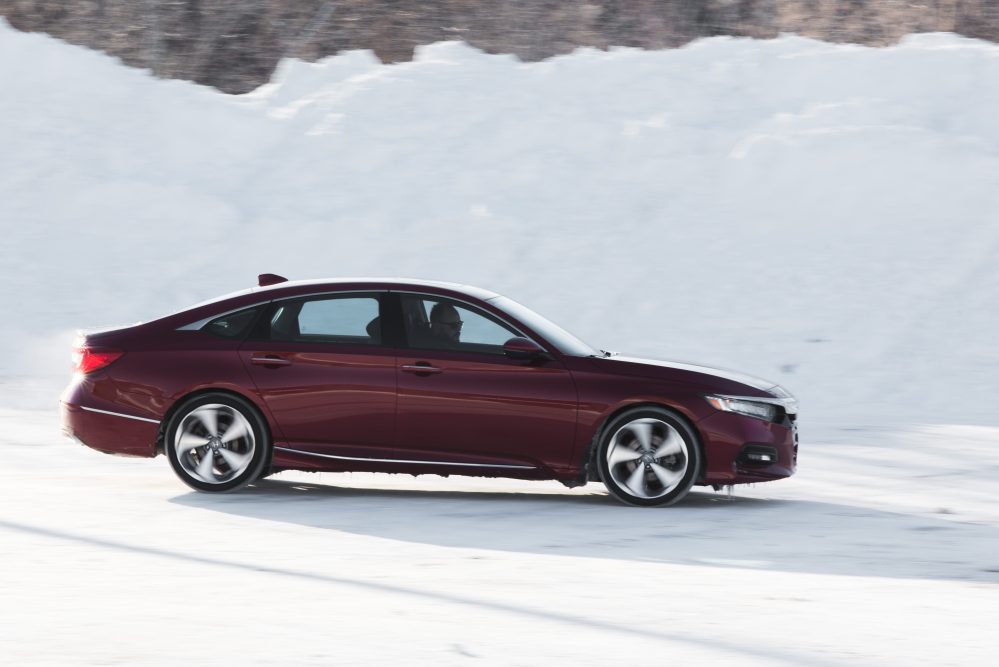 This is a car that asks you to drive and savor it as it sinks into your daily grind. It’s so easy to live with, yet also so engaging, that it disappears from underneath you and transforms into an efficient tool, one that is always punching way above its weight.

The Accord feels light, yet impeccably well put together, remains rock solid no matter what you throw at it. Although  I did notice that some of the cabin’s materials have an irritating tendency of causing more rattling noises than they should. 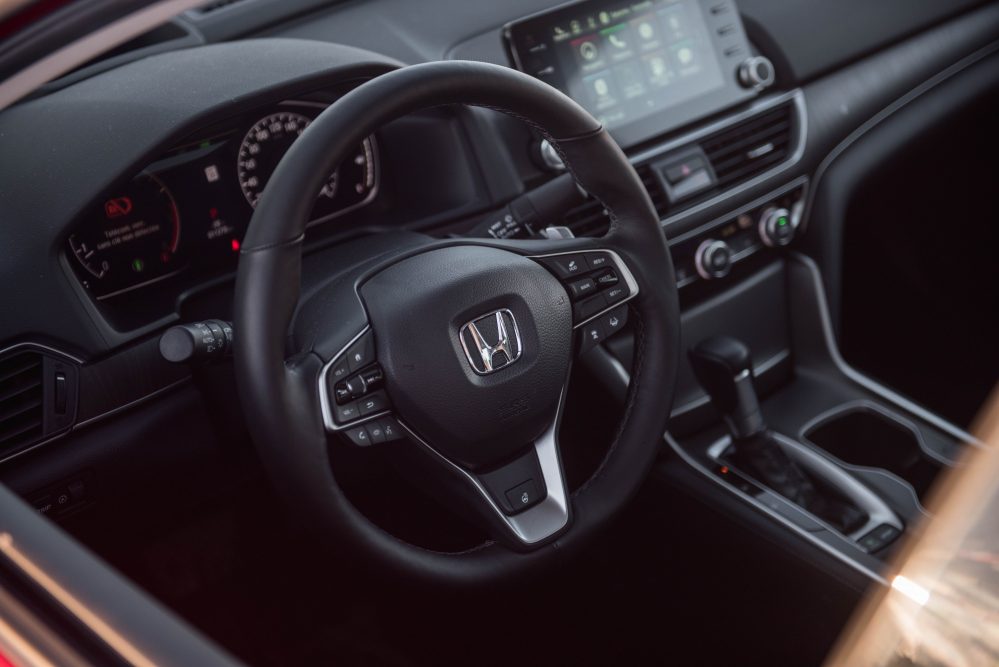 Power from the 1.5-liter turbo is linear, smooth and gutsy, which adds to the Accord’s playful character. In this package, this sedan won’t set lightning laps nor will it hunt down a BMW 3-Series down a curvy road, but it’s the way it delivers its 200 horsepower that’s truly enjoyable. Its a small engine, but it lets you push it in ways it was never intended to, and rewards its driver for doing so. 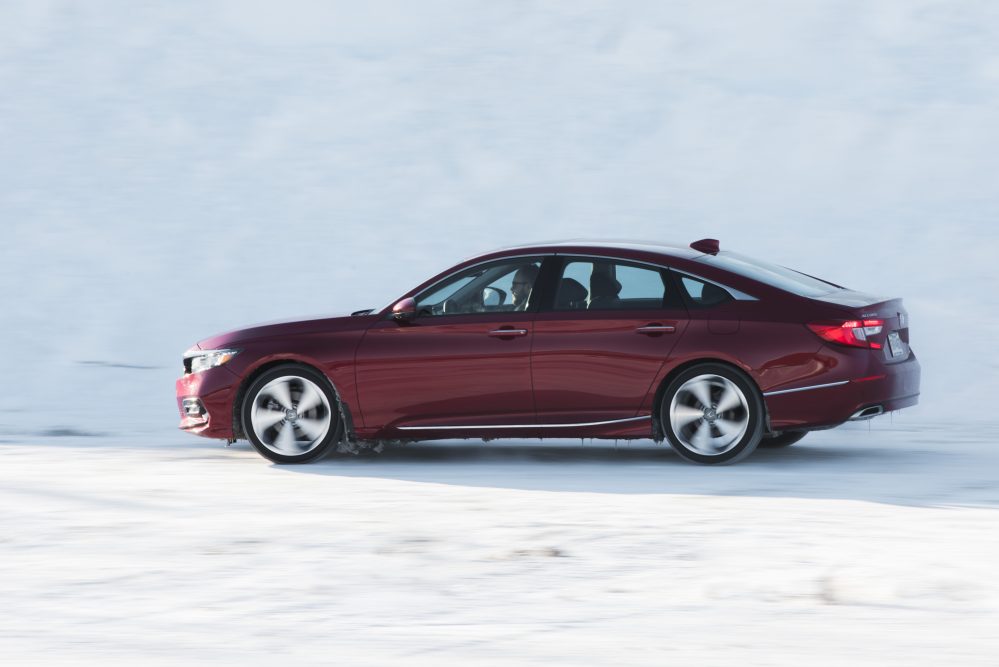 The Accord handles gracefully down a back road, a hallmark of its properly tuned chassis. There’s a weighted steering and a balanced ride, the kind of in-betweener you want for your weekly commutes, a companion you can also count on in the event you’ll need to let off some steam by driving out into the canyons. It’s fuel efficient too, my tester constantly kept things below 8L/100 km average, even if I spent most of my drives flogging the Accord down highway offramps. 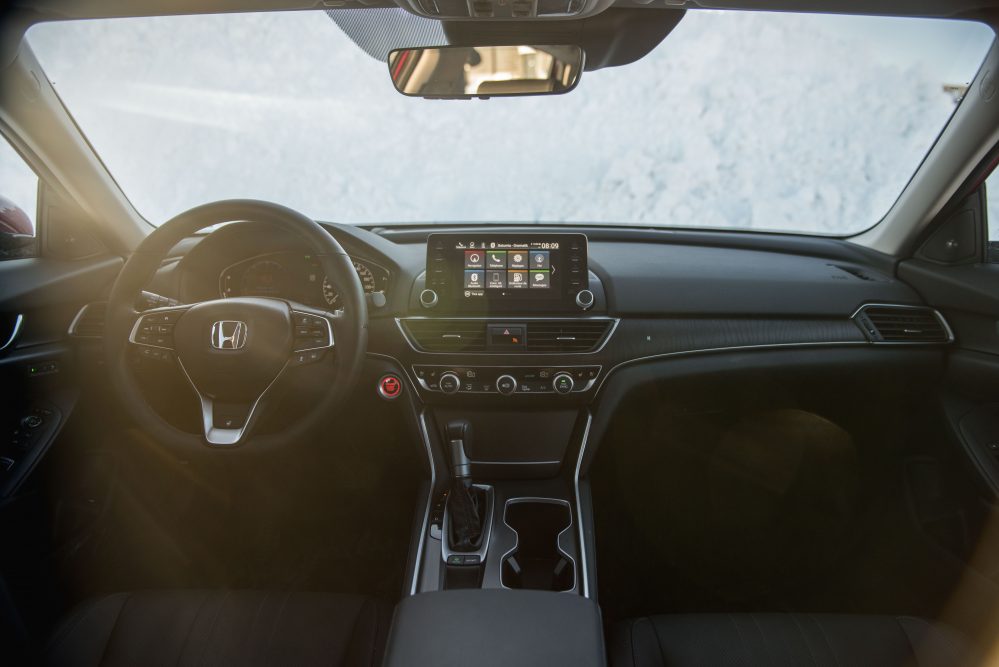 Inside, the Accord’s two-year old cabin design is still fresh, modern and put together with the same sense of fanatical craftsmanship as a Swiss watch. Again, there’s a brilliant simplicity in the way everything seamlessly rests in the palm of your hand, from the perfectly positioned HVAC controls to the straight forward physical knobs that were put there to control the infotainment system. 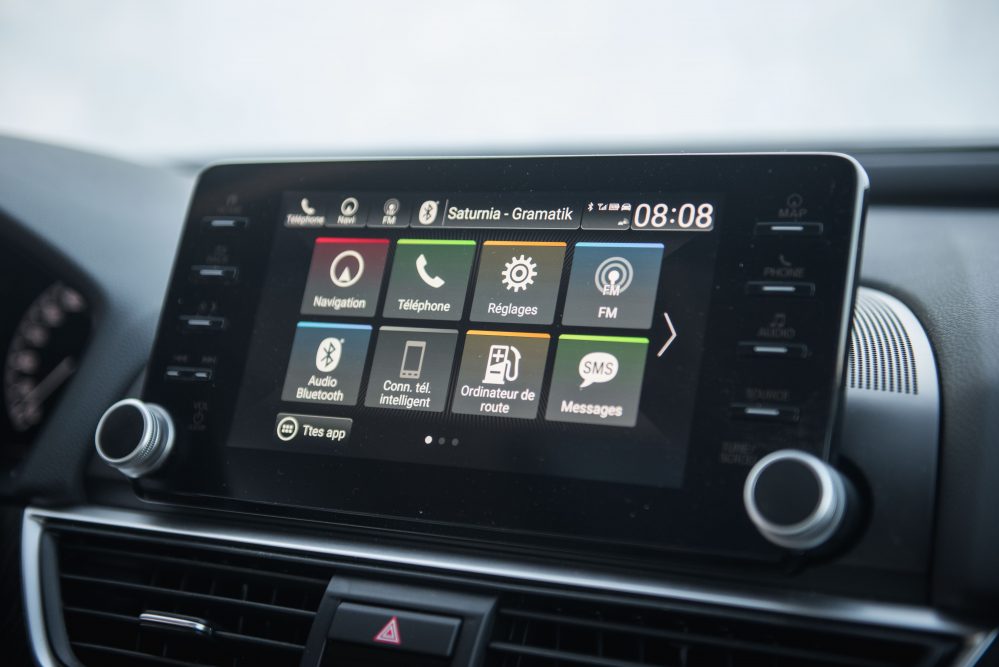 I still don’t understand why the rest of Honda vehicles don’t get the Accord’s excellent software. Not only is its layout beautifully presented in large, colorful tiles, the entire system responds quickly and intuitively. It’s also all Android Auto / CarPlay compatible and will even sync to an NFC-equipped phone without fiddling. I personally dig how the car’s tachometer can also double down as an information screen. 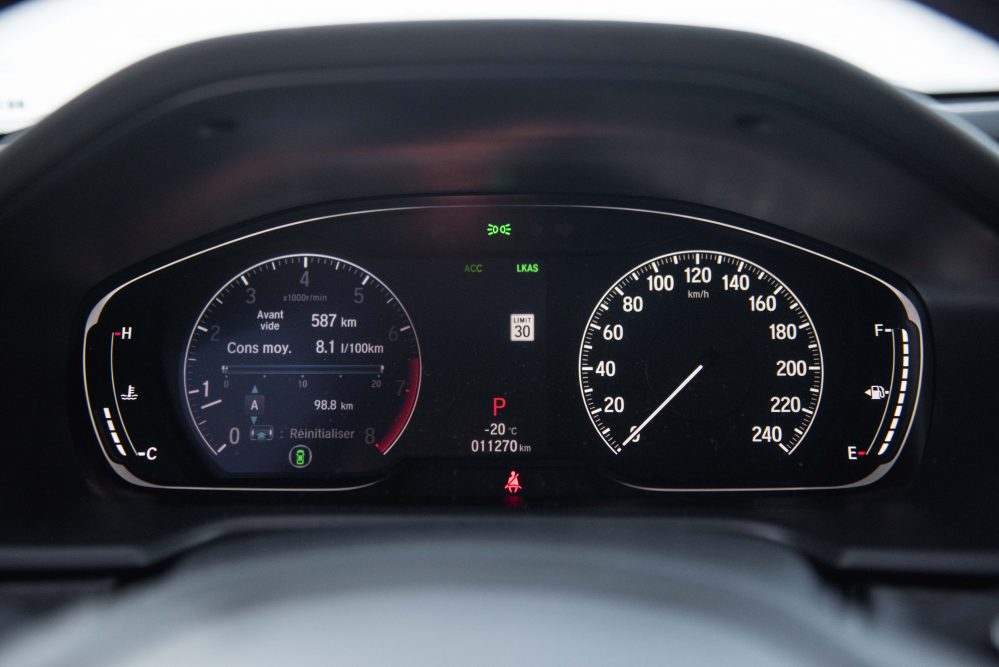 Finally, the Accord’s cabin is a roomy and immensely comfortable place to spend some time in. I personally adore this car’s seating position, however I’m not a fan of its large rear blind spots. Looking out of this car is plain weird. Rear seat room is plenty spacious, and overall headroom is fine given the car’s coupe-like roof. 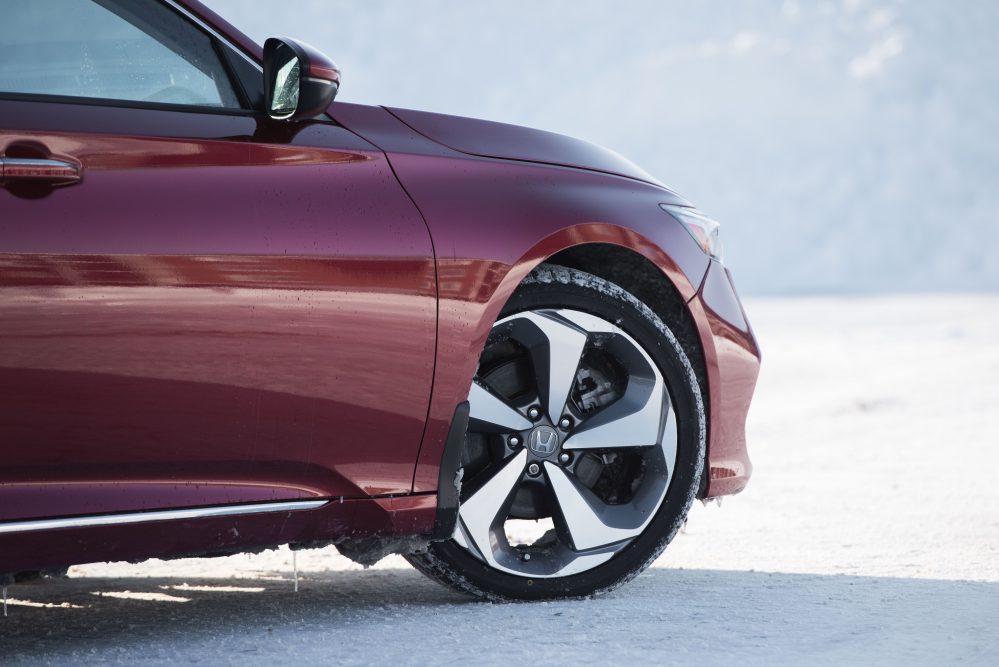 Now, because the Accord isn’t an SUV, don’t expect it to be as practical as say, a RAV4 or a CRV. But for a sedan, the Accord’s trunk is massive. It’ll eat up 473 liters of your gear, beating both Camry (427 liters) and Altima (436 liters). 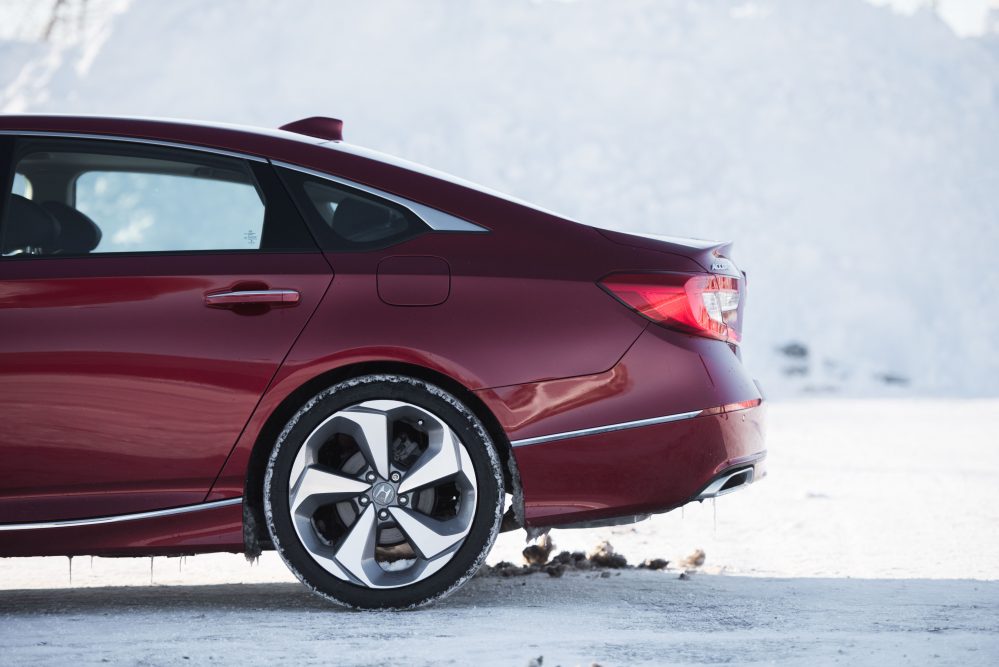 The 2020 Honda Accord could be called the benchmark because it’s more spacious, practical and more frugal than its rivals, but that would ruin the point of its existence. If Honda’s midsize sedan as been praised by automotive media for over 30 years, it’s because it does something other cars in this class don’t. The Accord gives its owners more than they asked for. 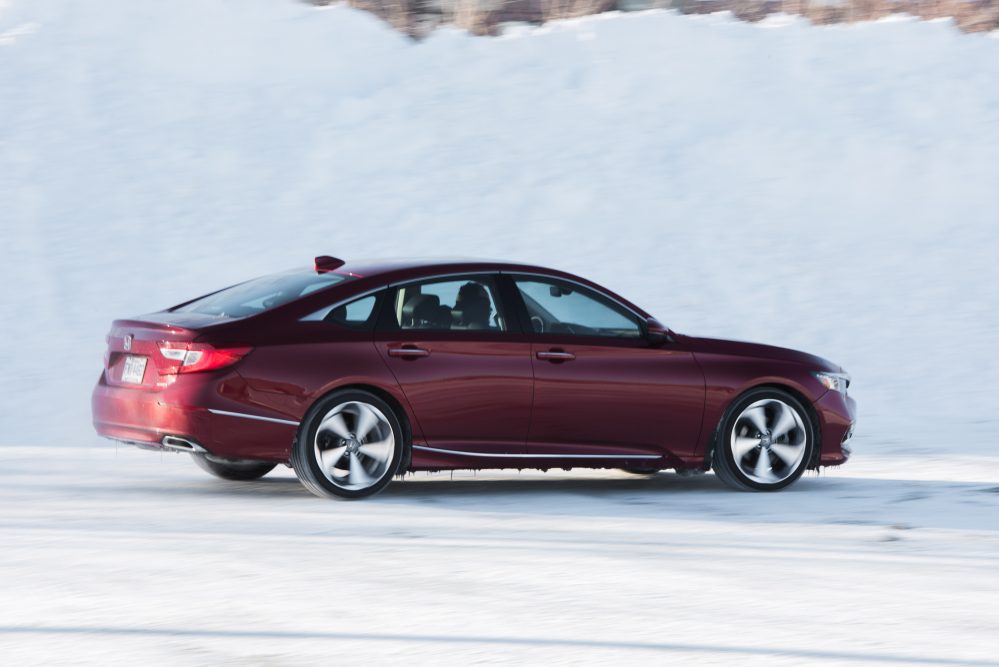 It’s a family sedan, with plenty of room, trunk and technology, in which Honda has also hidden an engaging sports car for enthusiasts to discover, all at an affordable price. It’s a downright great machine. But are you even surprised? Let’s face it, the day the Accord won’t be a good, dependable car, all will be lost in the world.

Review of the 2020 Honda Accord by William Clavey
Midsize Sedans