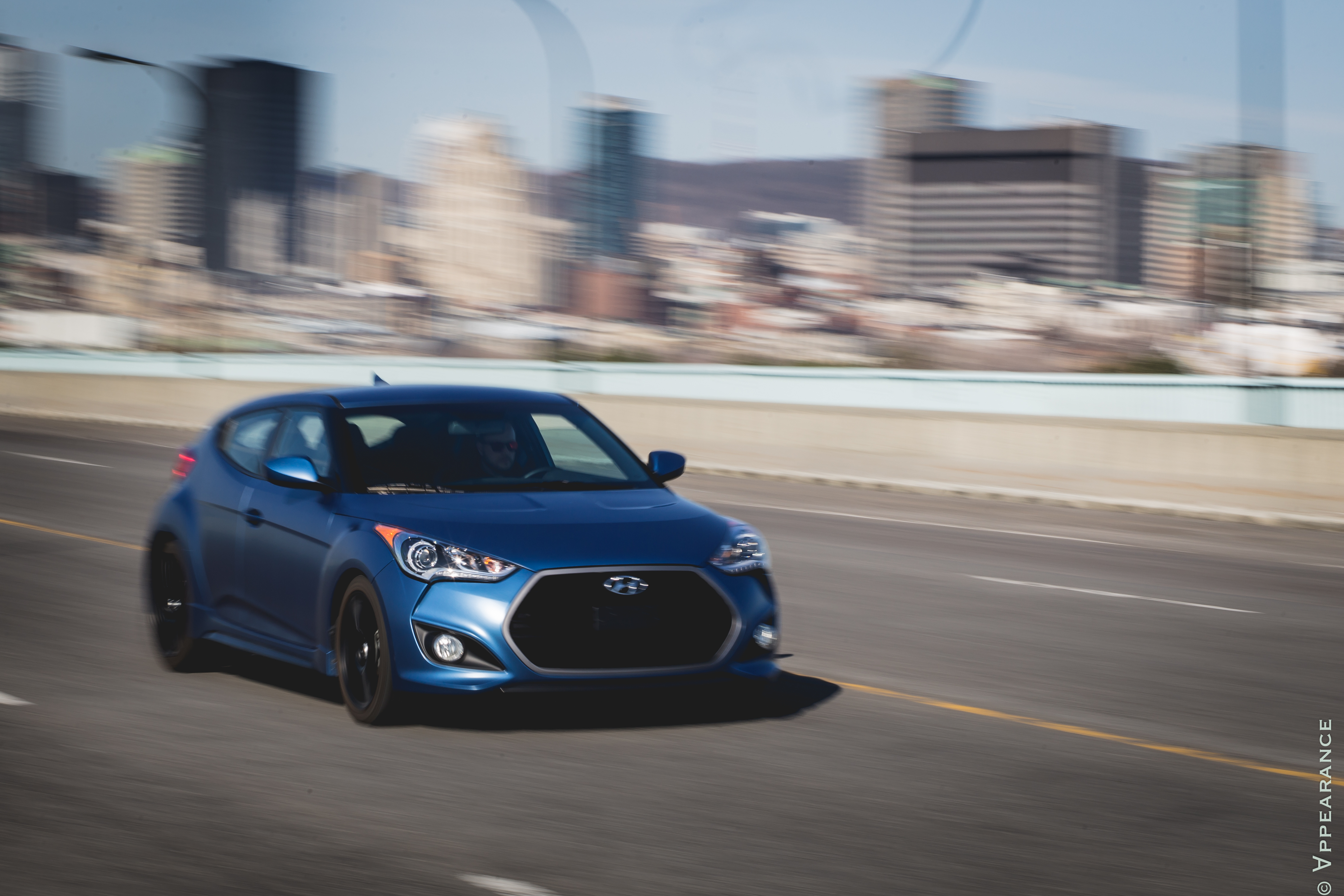 Say what you will about the Hyundai Veloster, it sure knows how to make an impression. However, when Hyundai added a turbo to their asymmetrical little hatch in 2013, they fell a little short of offering enthusiasts a true alternative to the Golf GTI.

Yes, the added power was welcome, but the suspension components and brakes hadn’t been upgraded from the base car, preventing the Veloster from delivering the dynamic prowess that made its competitors that much more special.

Hence the Veloster Rally Edition. No, this car has nothing to do with the one Thierry Neuville and Nicholas Gilsoul will be using to tear up WRC rally stages this year. It does, however, mark Hyundai’s participation in the sport, and adds just enough hardware to satisfy the hardcore enthusiasts – or so Hyundai thinks.

That Matte Paint Though 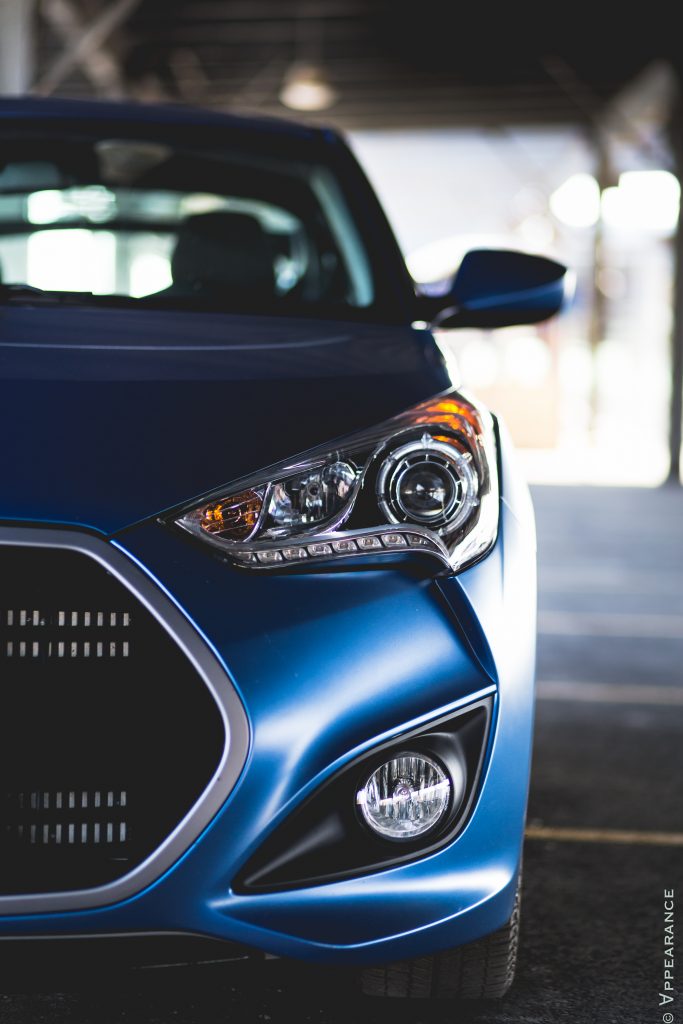 So, what exactly does this limited production Rally Edition add to the Veloster Turbo? For starters, there’s that kick ass matte blue paint job, which, combined with the fake carbon fiber accents (exclusive to the Rally Edition) and blacked-out 18″ RAYS wheels, gives this Veloster the proper boy racer treatment.

But the modifications are more than cosmetic. Those lightweight wheels are fitted to a 10-mm wider tire, and, according to Hyundai, help reduce unsprung weight by five pounds per wheel. The Rally Edition also comes equipped with a B&M Racing short throw shifter (available as an option on the Turbo), upgraded shock absorbers, coil-springs, and beefier stabilizer bars. 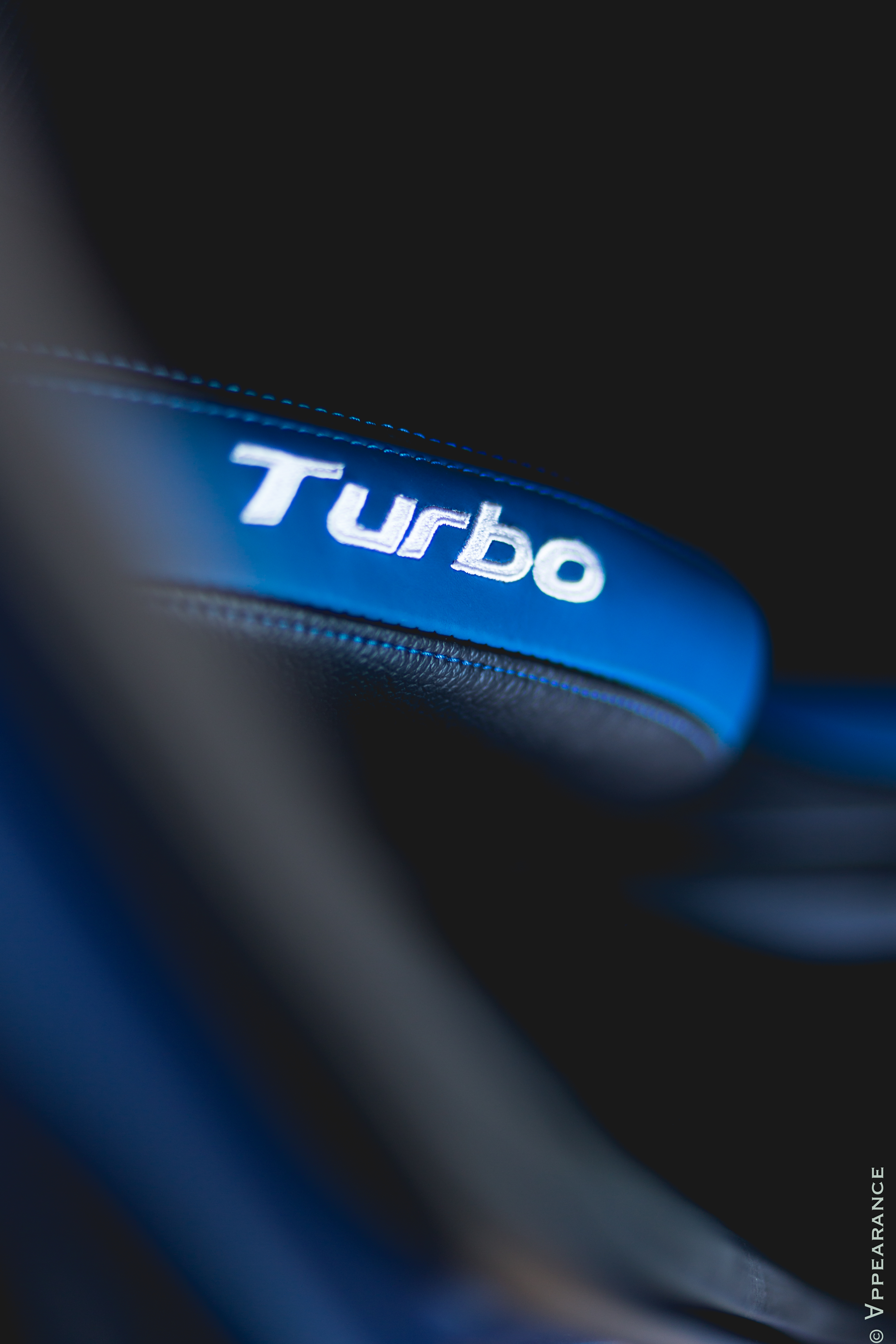 There’s also unique badging, floor mats, blue accentuated interior components and seats, as well as a Dimension 8-speaker sound system with a trunk-mounted subwoofer. Oh, and the only transmission available is a 6-speed manual – thank God. 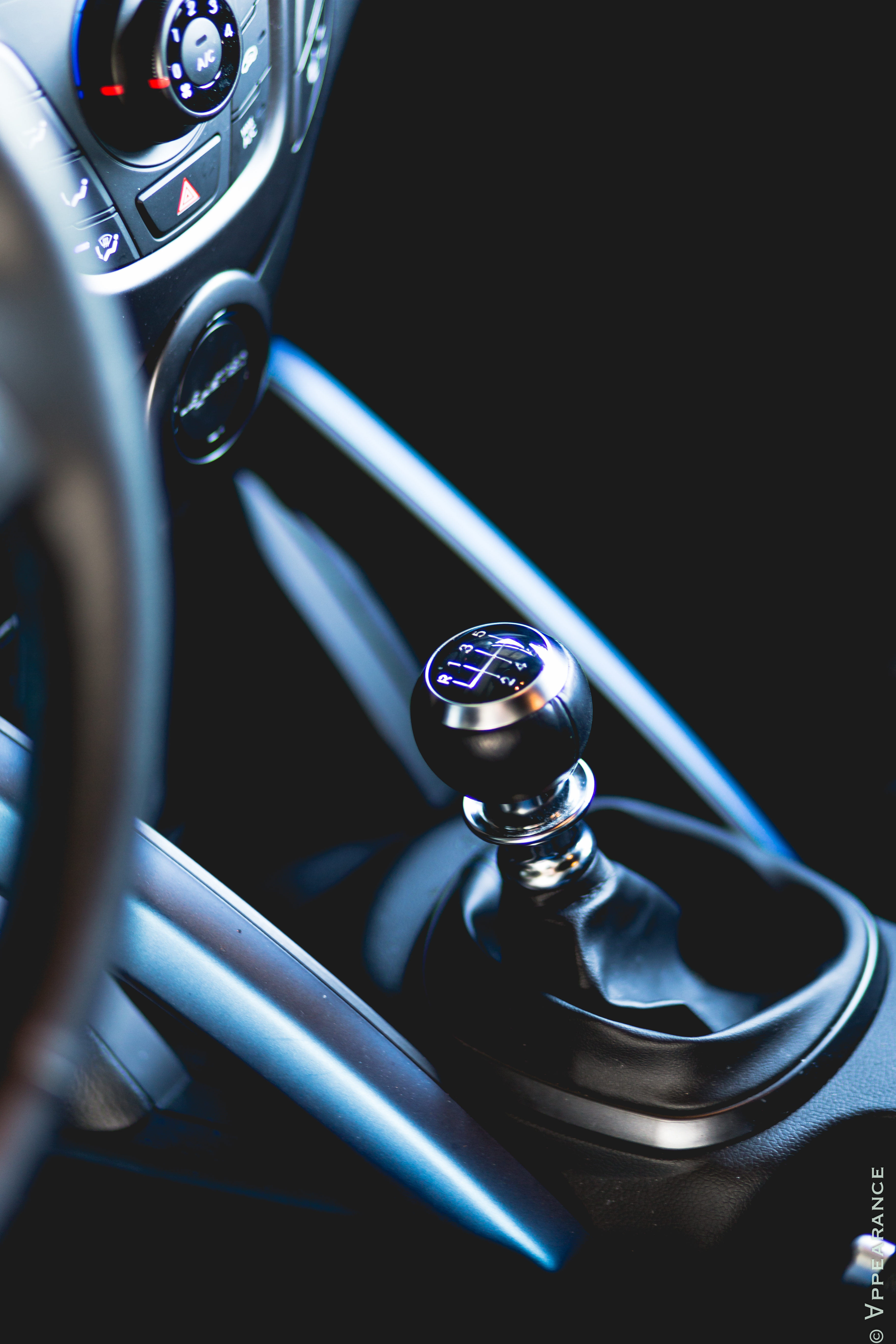 Of course, being based on the Veloster Turbo, the Rally Edition inherits the same superb 1.6L direct injection turbo four-cylinder good for 201 hp and 195 lb-ft of torque.

Now, before I go on about the way this thing drives, let me take the time to express my impressions about the styling.

It sure looks unusual doesn’t it? 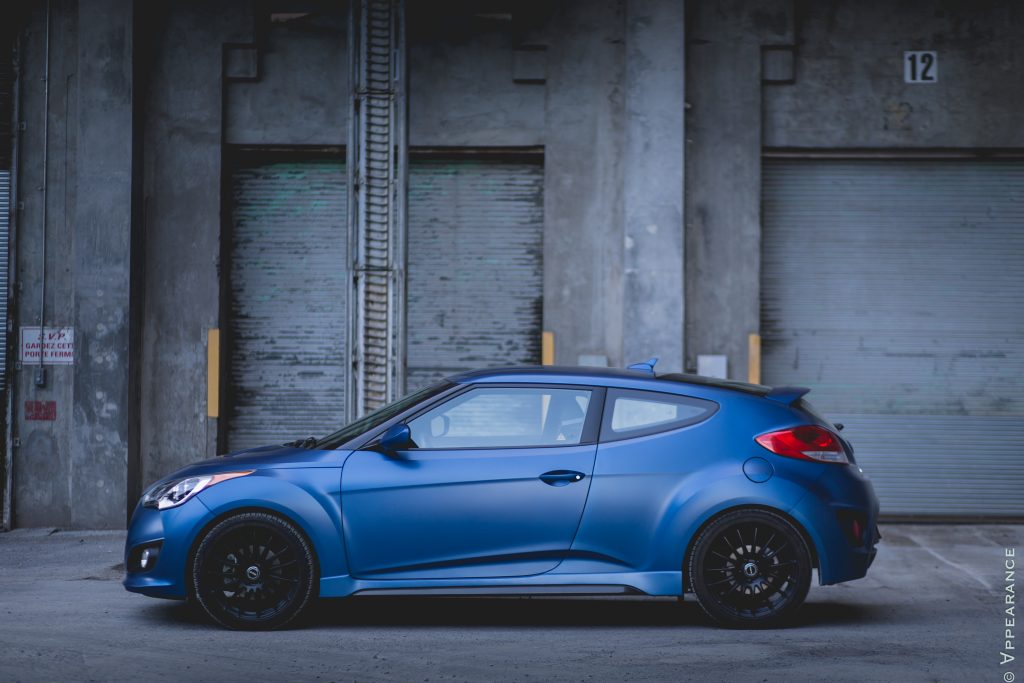 Especially with those two doors on one side and single door on the other. You can actually notice that the B pillars aren’t located at the same position on each side. From some angles, especially from the driver’s profile view, the Veloster looks absolutely gorgeous, reminding me of the Honda CRX, one of my favorite cars of all time.

But from other angles, such as the rear, it looks too tacky, too over-the-top, and, well too plastic for my tastes. I’m also not a big fan of the two enormous red reflector lights in the rear bumper.

Nevertheless, the Veloster did attract a lot of attention during the week I had it, especially that matte blue paint job. People had mixed opinions, with comments ranging from “looks amazing!” to “what an awful-looking car!”

Everyone I met, though, was intrigued and wanted to know more about the Veloster, which, I assume, is exactly what Hyundai was aiming for with the design of this car. 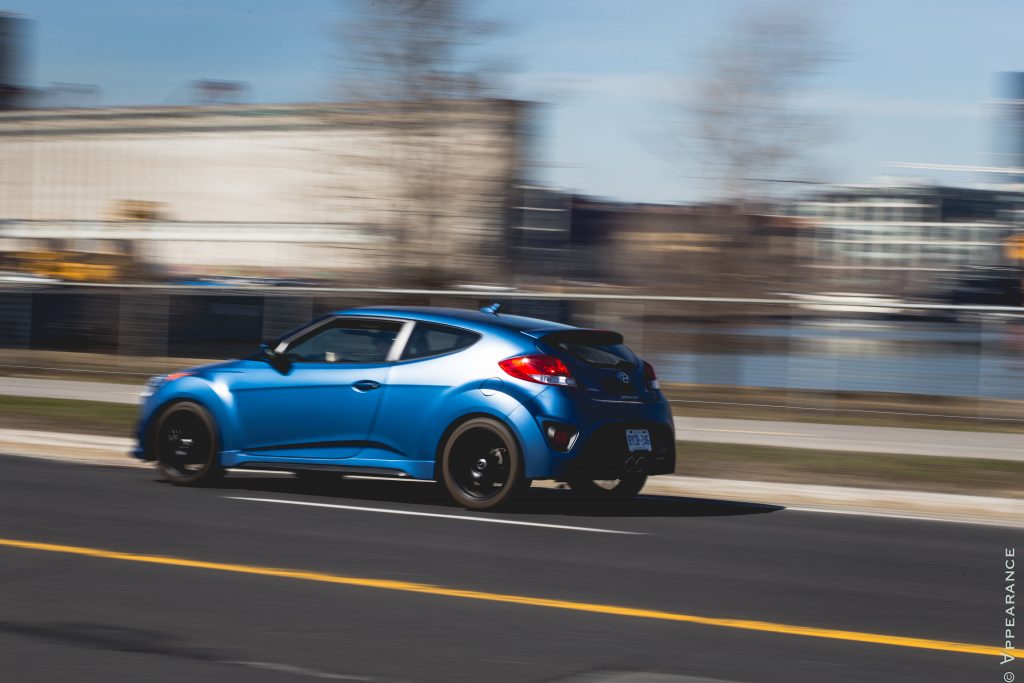 On paper, the Veloster does indeed boast some impressive numbers. Weighing in at just 1305 kg, the power-to-weight ratio is decent and in tune with the competition. In fact, Hyundai prides itself that the Veloster Turbo is 70 kg lighter than a 4-door Volkswagen Golf GTI while offering roughly the same amount of power.

And you do feel that power behind the wheel. There’s a solid push of boost delivered down low, followed by a linear and steady delivery all the way to redline; with peak power happening at around 6,000 rpm. It all makes for a broad range of usable performance. 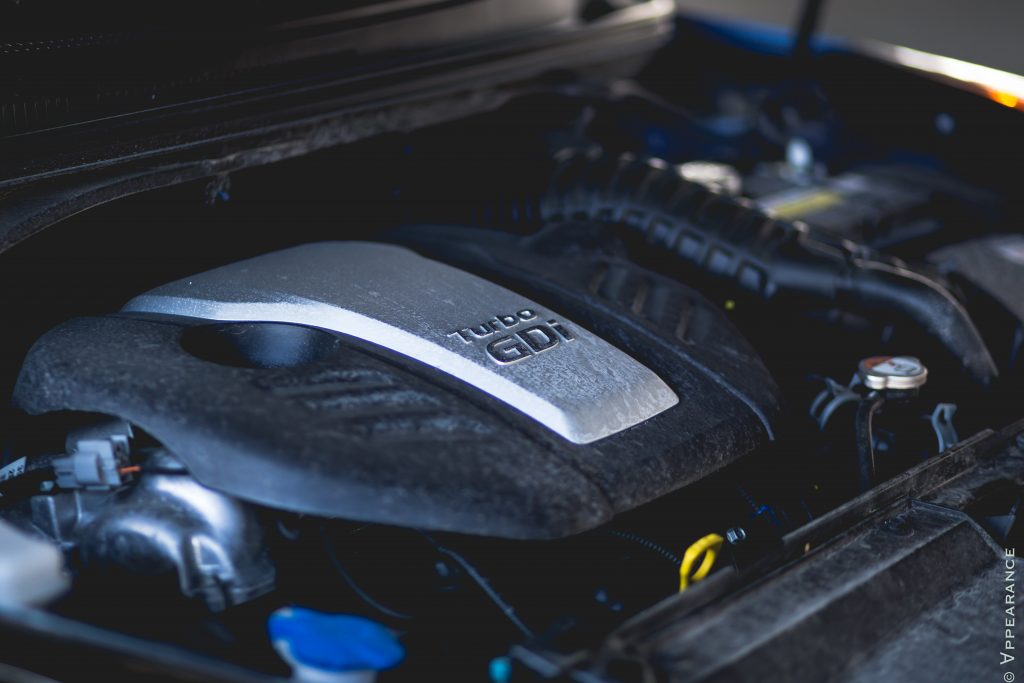 This is, without question, a fun car to drive, one which you’ll enjoy ripping through the gears and drive like a hooligan. 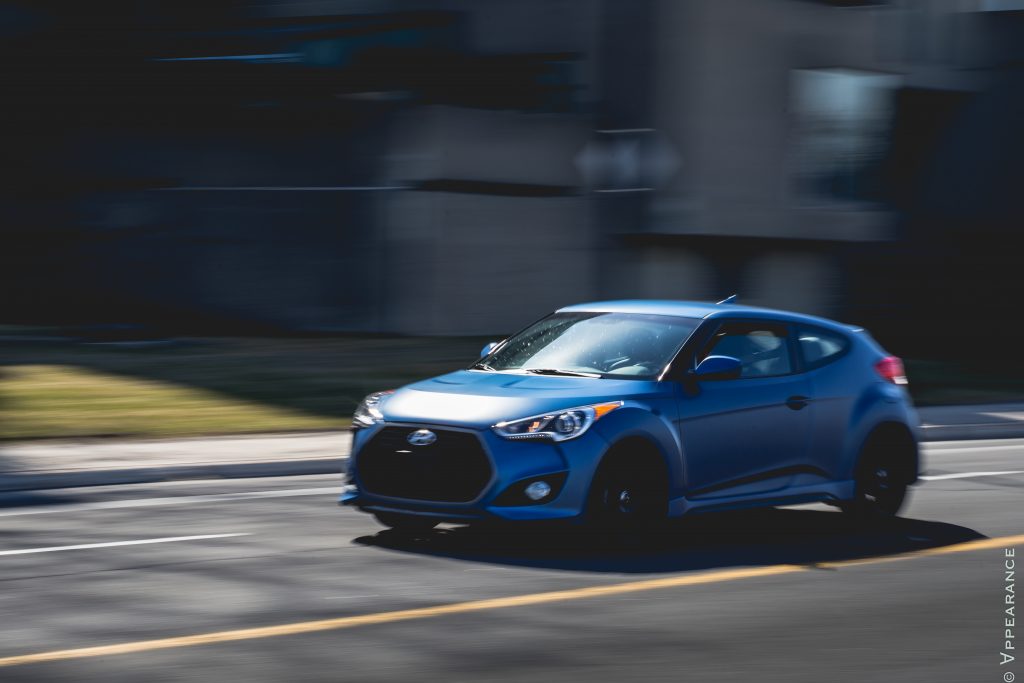 There is, however, a slight problem with steering feel. Although much improved over the standard Veloster thanks to a shorter steering rack and added resistance, it still feels somewhat vague. There’s also a rather wide dead zone when placed on center. 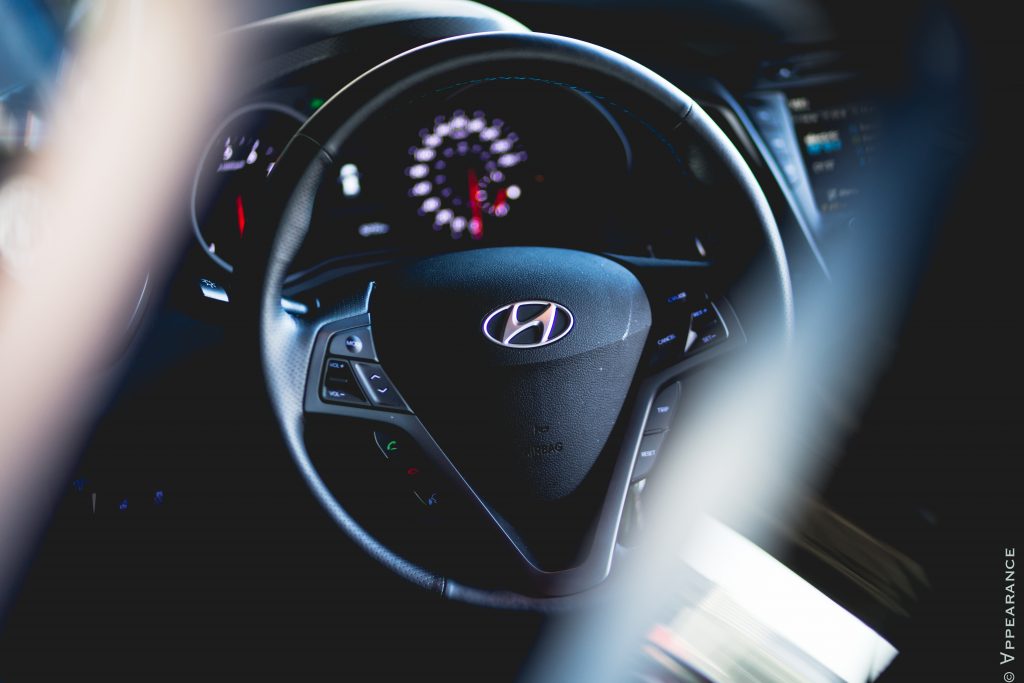 The tiny Veloster, with its abundance of overwhelming power on tap, isn’t a refined sports car by any means, but remains a sports car nonetheless, one that is respectfully quick off the line. According to Car and Driver, it’ll hit 100 km/h in 6.7 seconds. 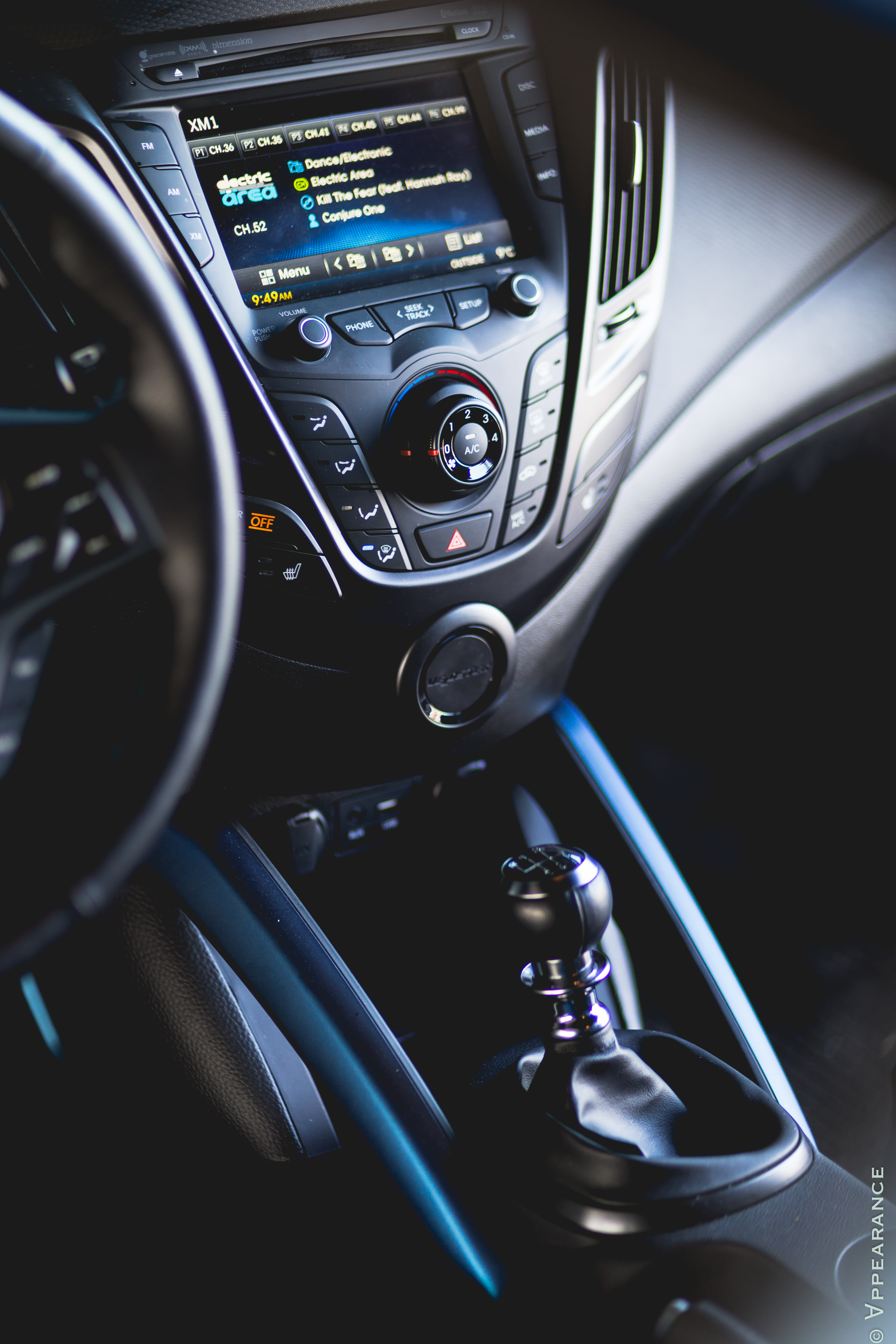 I also enjoyed the 6-speed manual transmission. It’s not as “snick snick” as what you get in a Honda, but the short throws and precise cog engagement from that B&M Racing shifter, combined with a light clutch and surprisingly more than satisfying brakes, all add up to a fun and almost old-school driving experience. 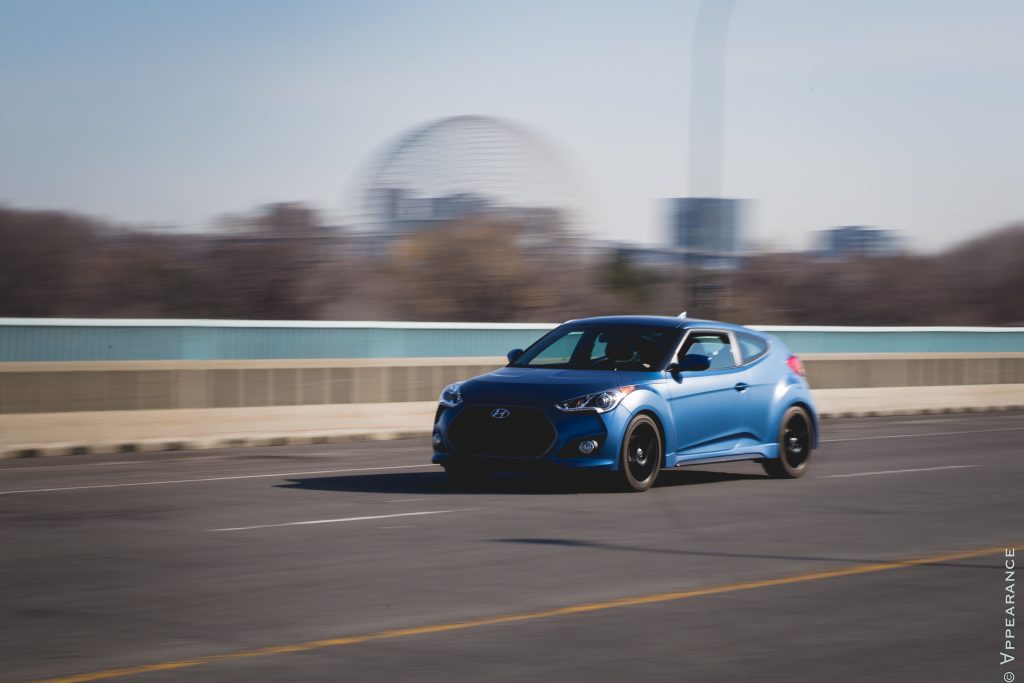 Where the Veloster disappoints, however, is in its chassis dynamics. Yes, the Rally Edition receives a much-needed suspension upgrade over the standard Turbo and does feel generally nimbler, stiffer, and more reactive. I’m also impressed at how well Hyundai has calibrated this new suspension setup, leading to a much more focused car in every way.

But the Veloster still falls short from being a stellar handling machine.

First, there’s the lack of a limited-slip differential. This means that not only will the Veloster exhibit a fair amount of wheel hop when launched hard, it annoyingly peels from one wheel and plows forward when power is applied coming out of a corner.

This not only prevented me from truly pushing the car’s limits; it’s also the reason why the Veloster is unable to put down a faster 0-100 time. 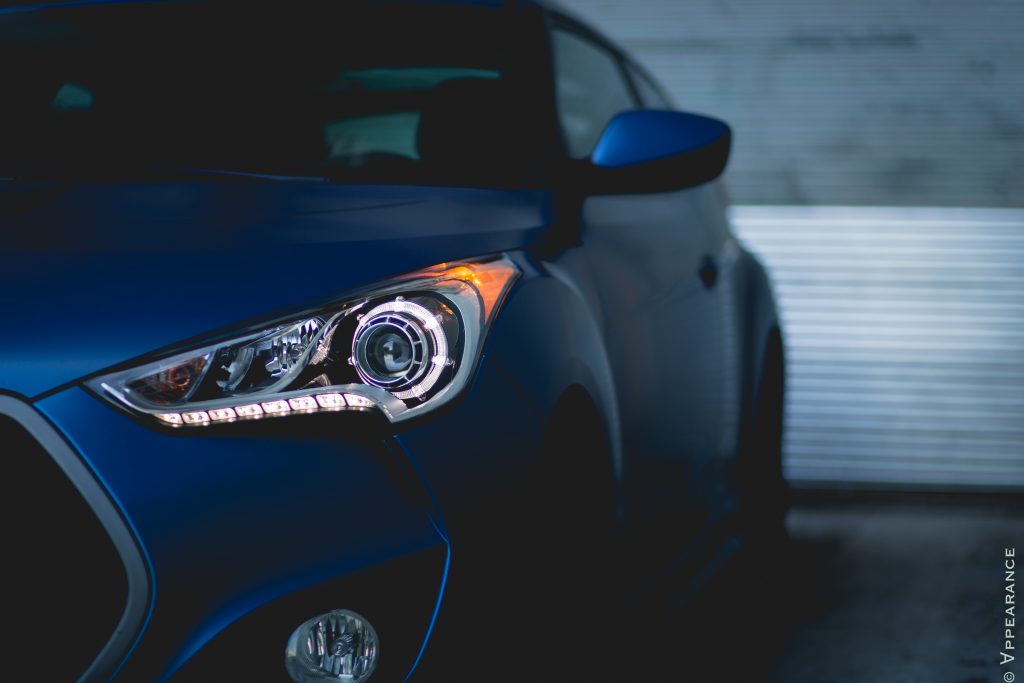 Also, the rear suspension is a solid axle design, which, although it will happily wiggle upon throttle lift off, doesn’t deliver the confidence-inspiring handling characteristics as in a Fiesta ST for instance. Instead, the Veloster’s rear end bounces aggressively when driven fast over road imperfections, making for a car that can be very unsettling; almost scary at the limit.

And finally, there’s the fact that the Veloster rides on an ageing platform. After trying out Hyundai’s new uber-solid chassis structure in the 2016 Tucson, the Veloster made me realize how quickly the brand has evolved in just 5 years. 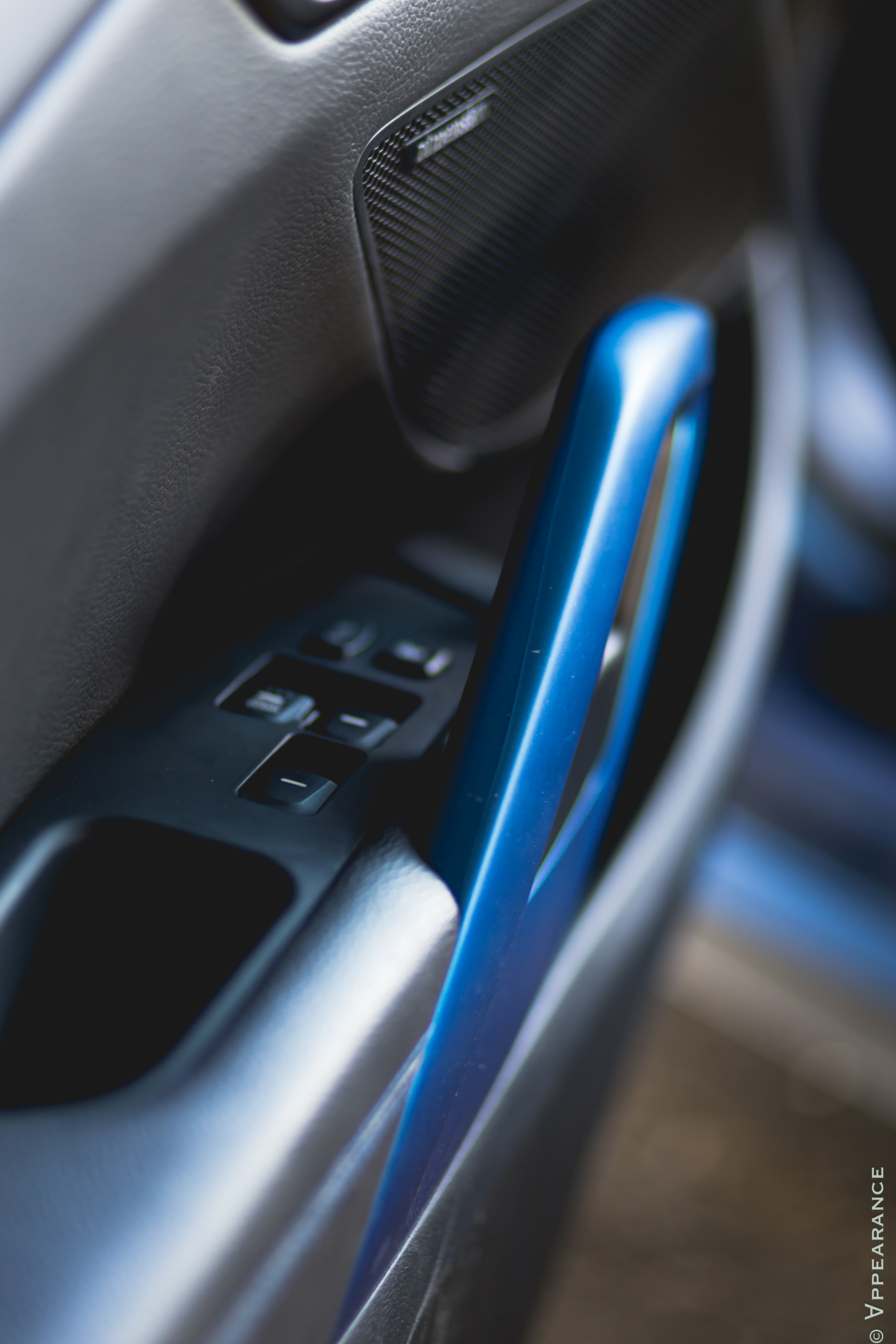 Even with Hyundai’s efforts to sharpen up the handling with the Rally Edition, the Veloster still rides on the same platform as the last generation Elantra; one that was never intended to underpin a sports car. This means that the Veloster frustratingly flexes and quibbles undesirably over the slightest cracks and bumps with occasional squeaks and rattles resonating throughout the cabin.

All this Extra Hardware at No Extra Cost 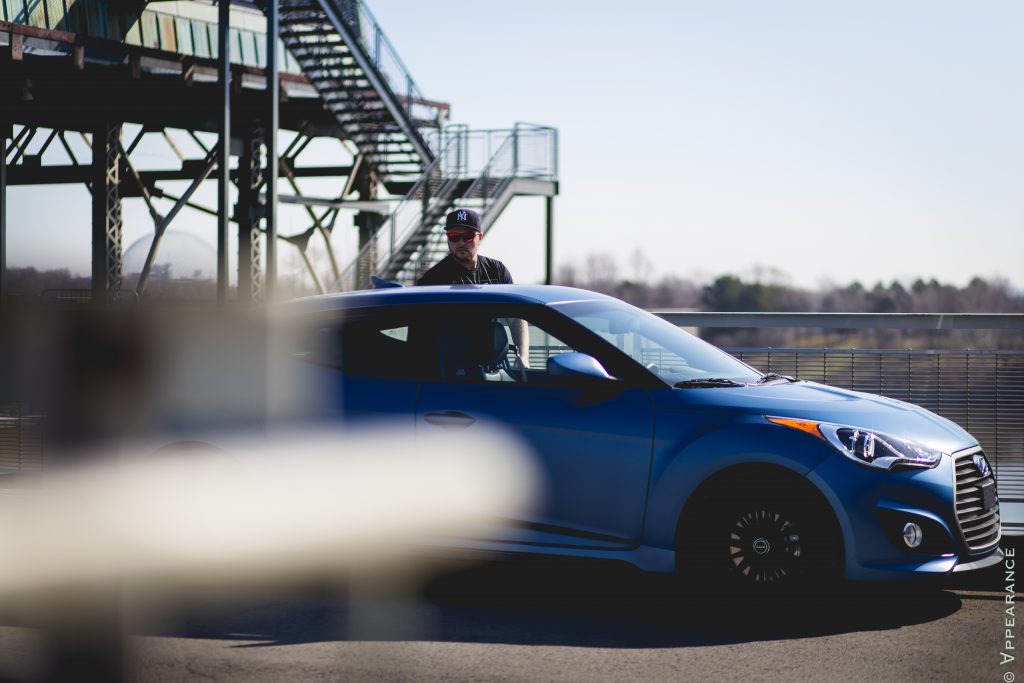 One of the greatest news about the 2016 Hyundai Veloster Rally Edition is that all this extra performance hardware comes at no extra cost over the standard Veloster Turbo.

At $27, 199, the Rally Edition is not only less expensive than a Golf GTI, it also comes with heated seats, a heated steering wheel, and a backup camera.

Lest not forget that bitchin’ matte blue paint job. 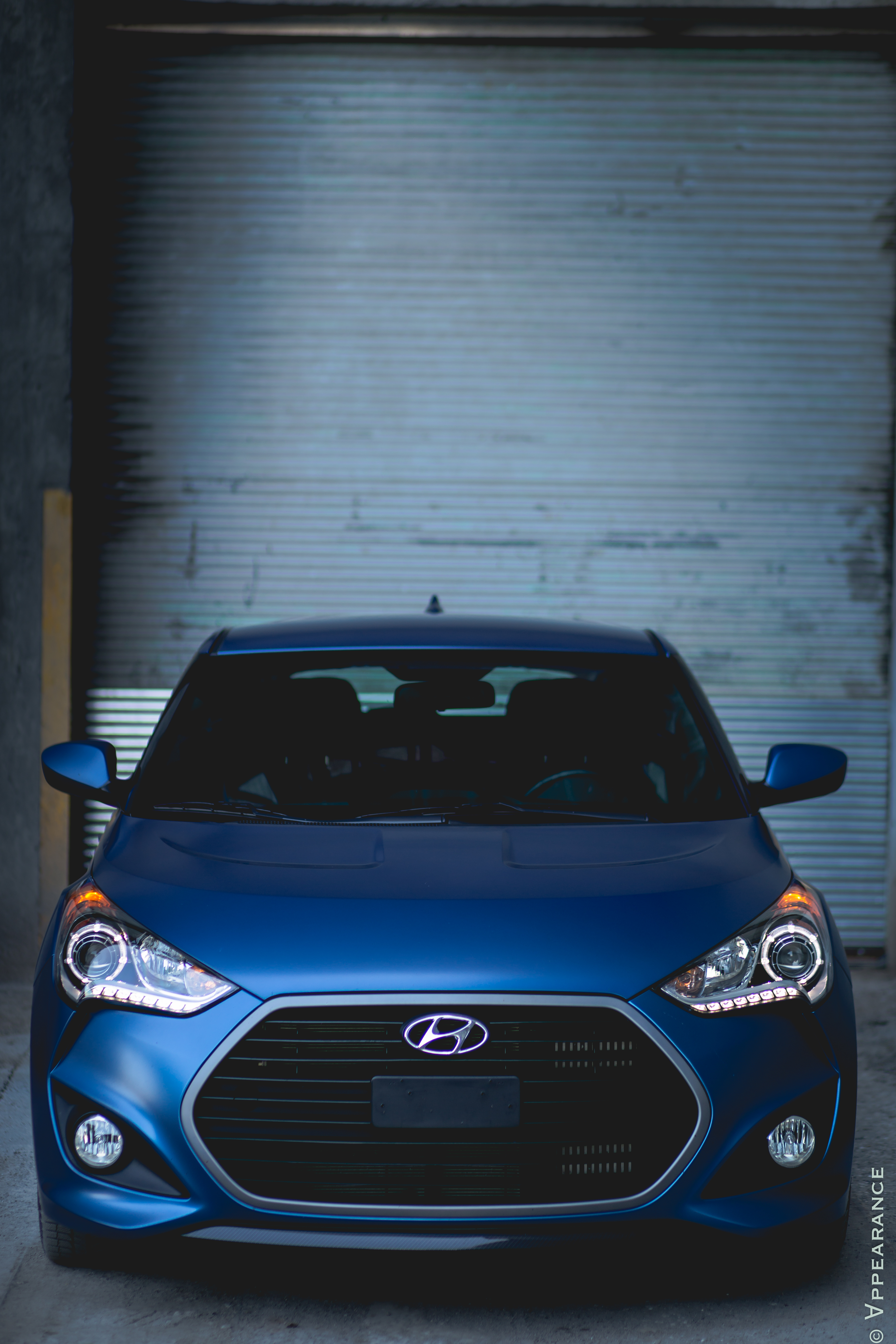 Truth be told, for an enthusiast, there is a lot to like about this car, and there’s not much missing to make it truly shine. But I have to admit, I really wanted the Veloster to be a true underdog alternative to the Golf GTI; a genuine driver’s car, and a throwback to the iconic Honda CR-X. The Veloster Rally Edition is a fun little tuner car alright, but a true hot hatch it is not. 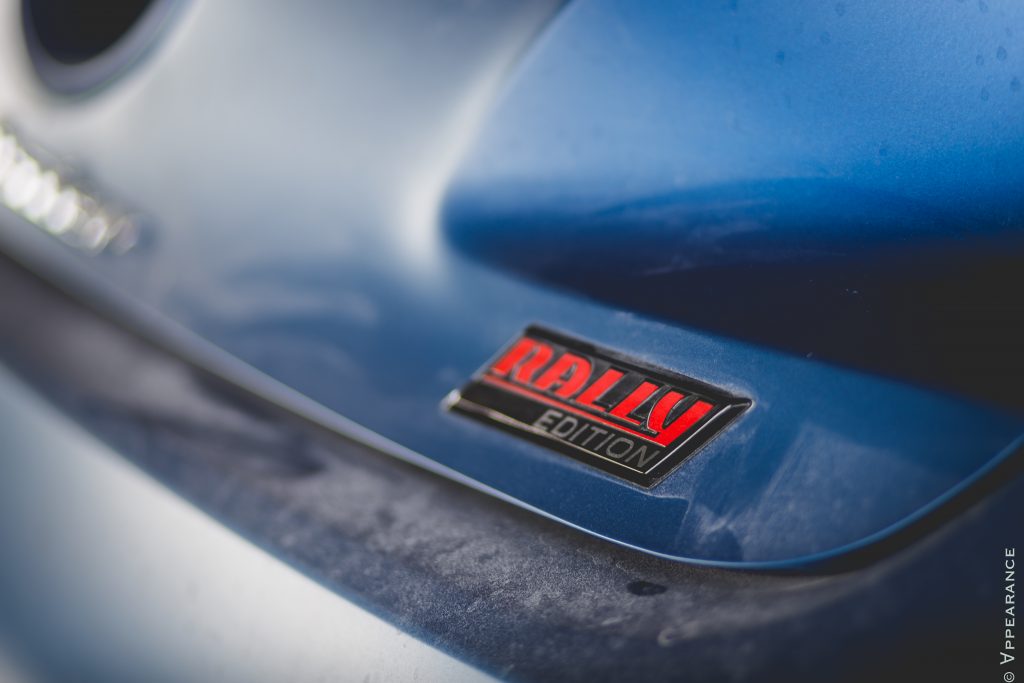 That being said, kudos to Hyundai for attempting to take on the front-wheel drive sport compact car segment; this is an aggressive market filled with well-defined players – such as the Ford Fiesta ST, which happens to be uncomfortably close to the Veloster in terms of price.

Perhaps all the Veloster needs is Hyundai’s new superstructure and a limited-slip differential for it to become a true GTI slayer.

Review of the 2016 Hyundai Veloster Rally Edition by William Clavey

–
– Absence of a limited-slip differential.
– Solid rear end leads to unstable ride at high speeds.
– Ageing chassis; not as solid and compliant as modern Hyundais.