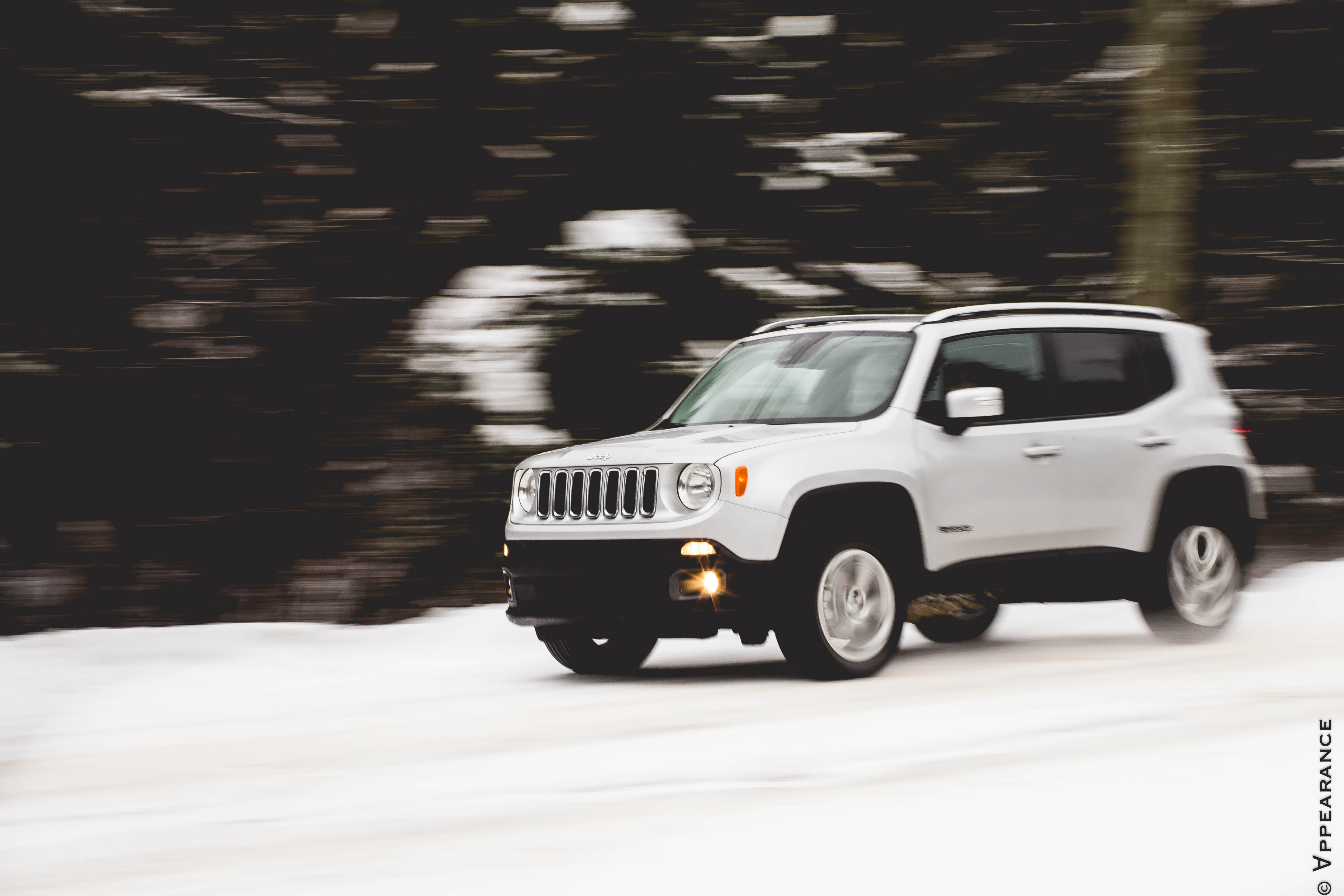 “It’s not a real Jeep!” – is what you can expect to hear when you mention any model based on a car platform that is bearing the iconic 4-letter nameplate. In all honesty, until recently, if it wasn’t a Wrangler or a Grand Cherokee, I couldn’t care less about Jeep’s compact offerings. The Patriot and Compass twins were nothing more than a horribly lifted Dodge Caliber.

Those things would have been fine if either a KIA or Hyundai logo had been stamped on their front ends, but they didn’t. They were just plain sad for the Jeep nameplate.

So, what about the Renegade then? It was supposed to replace the twins, until FCA announced in Detroit that Patro or Compo would live on (wtf?). Whatever, the arrival of the Renegade is still compelling news, but the flip side is that it’s still based on a car – on a Fiat – a Fiat 500L – the most unattractive car on the market right now (in my opinion at least). Go home Chrysler, you’re drunk.

But you know what? It turns out that fresh Italian blood is exactly what Jeep needs at the moment to stay alive. Here’s why.

The Renegade is all Sorts of Cool 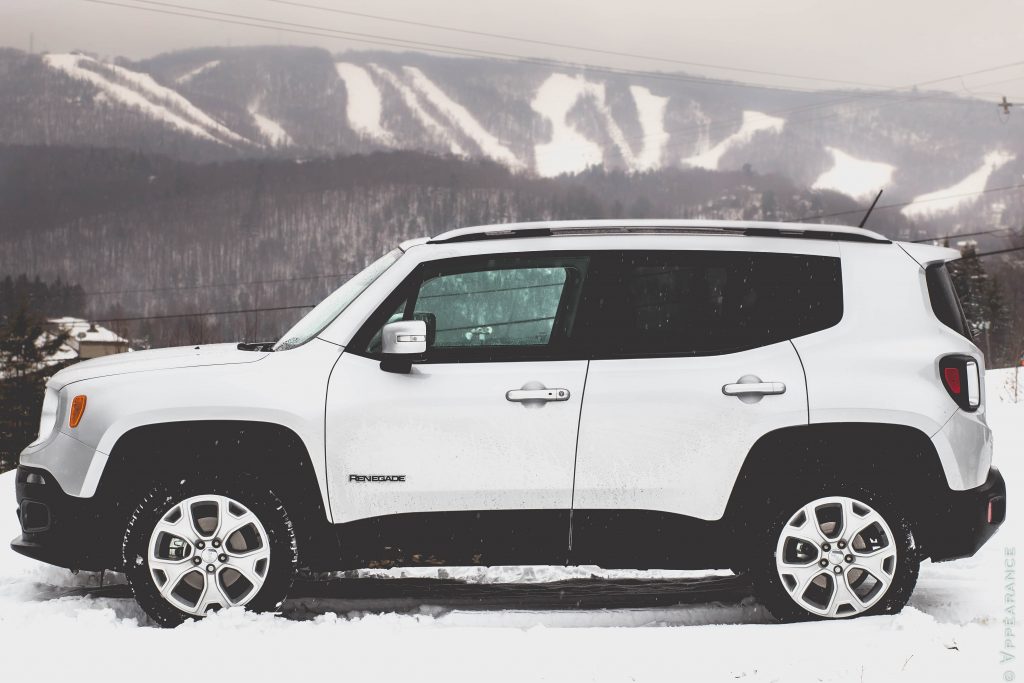 Let’s begin with the way this thing looks. It looks, well Jeepish, and that’s refreshing. You see, the Renegade is part of one of the most potentially lucrative segments in today’s car industry: the cute-ute segment. These are your tiny SUV or crossover things. Think Mazda CX-3, Honda HR-V, Chevrolet Trax, Nissan Juke, and Fiat 500X. And none of them look rugged.

Also, Jeep, being an SUV-only brand, desperately needs a piece of that pie.

Compact crossovers are, of course, not trucks. Far from it. They’re essentially lifted sub compact cars that were fitted with all-wheel drive systems. The CX-3 is a modified Mazda 2, the HR-V is a Honda Fit, and this, the Renegade (and the Fiat 500X), are, you guessed it, a lifted Fiat 500. Urgh. 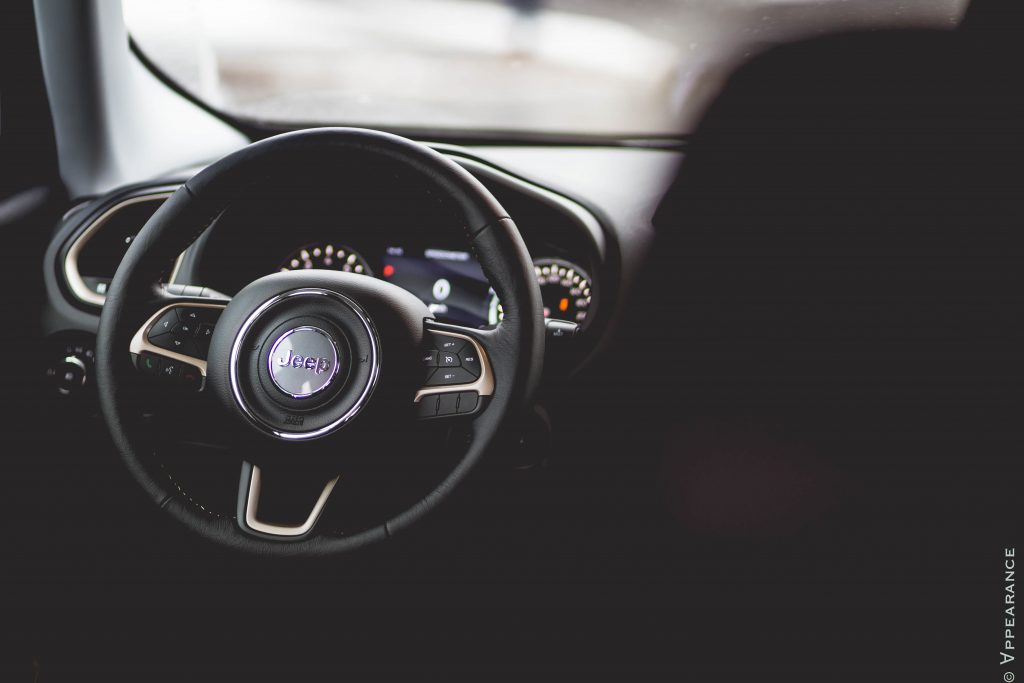 So, the fact that the Renegade looks nothing like a Fiat, a Fit, or a Mazda is indeed great news. As a matter of fact, it looks boxy, masculine, cheerful, and, above all, fun.

It actually looks like it was made out of Lego blocks. And that’s cool. From the tail lights with an integrated X intended to make them look like jerrycans, to its short wheelbase and nearly flat windshield, the Renegade is what the Wrangler would look like if it were a character in a Japanese cartoon. 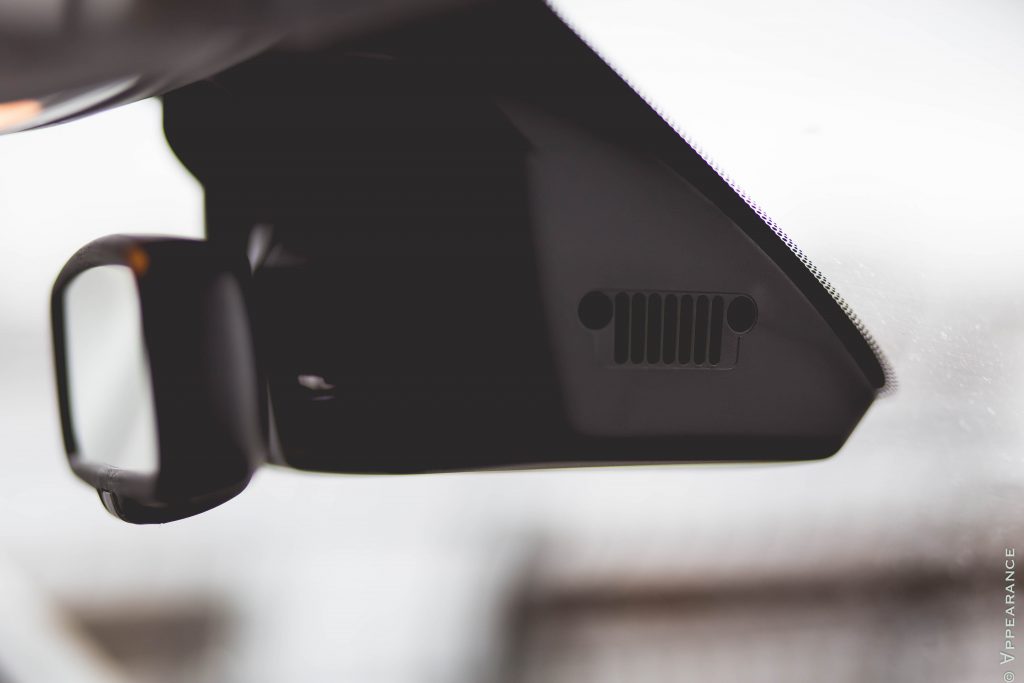 The coolest trait about the Renegade is the level of attention to detail that was pumped into its design. Easter-egg design cues from Jeep’s off-road heritage are plastered all over this thing. Look to the right of the windshield and you’ll spot a tiny Willis-style Jeep climbing the A-pillar. Pop open the gas filler cap and a little spider tells you to “back off!”. Reach for the tailgate handle out back and you’ll notice a little yeti hiding behind the wiper blade on the rear glass. There are Jeep grilles in every nook and cranny, from the speaker grilles (yes even the grilles have grilles on them) to the gear selector. And you’ll even find little maps with coordinates inside cup-holders and under the seats. 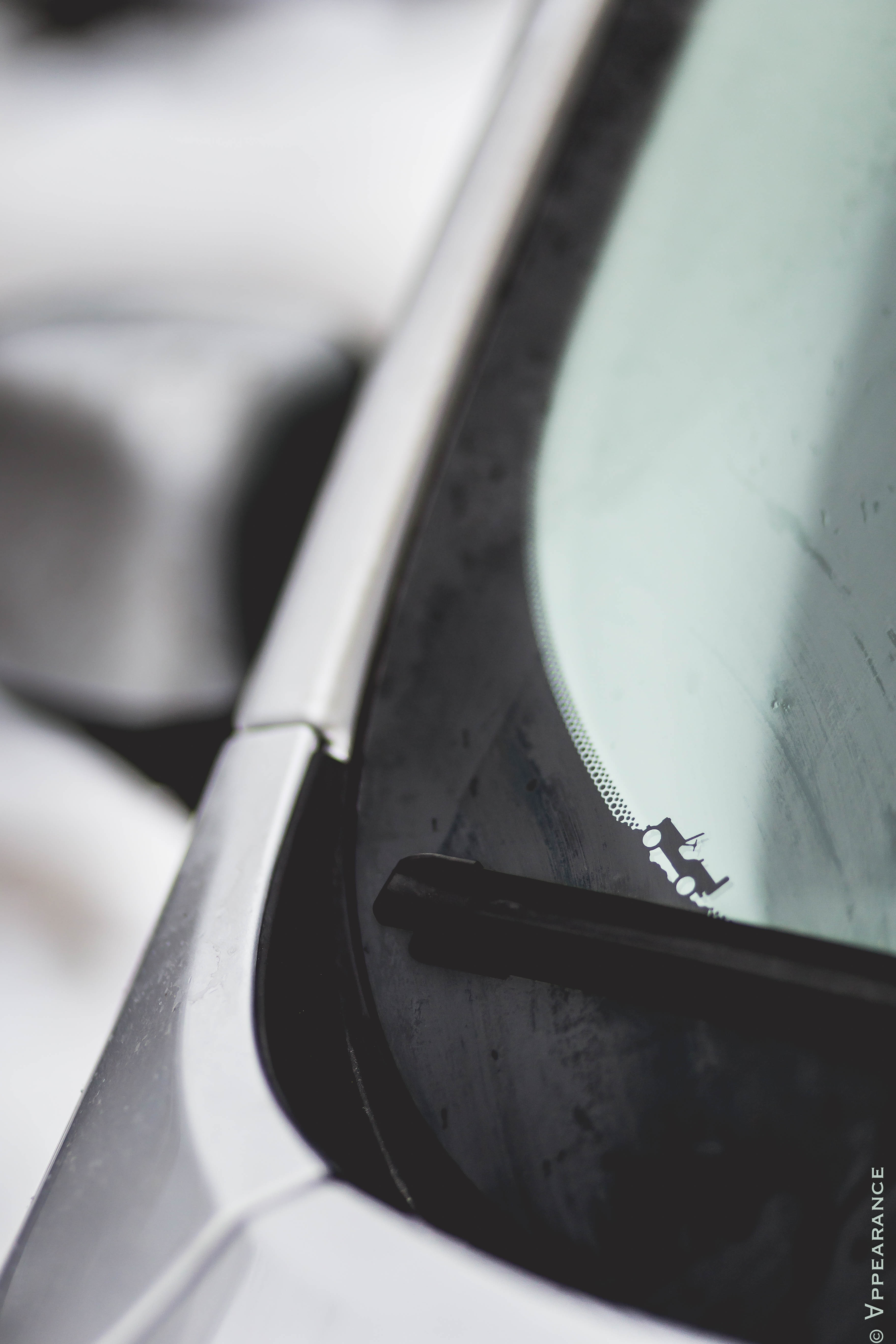 Finding all the Easter eggs is a rather enjoyable game. It also shifts your attention away from the fact that this is a shared Fiat platform and shows that Chrysler actually cared when building this thing. Unlike its Patriot and Compass brothers, the Renegade doesn’t feel half-baked. 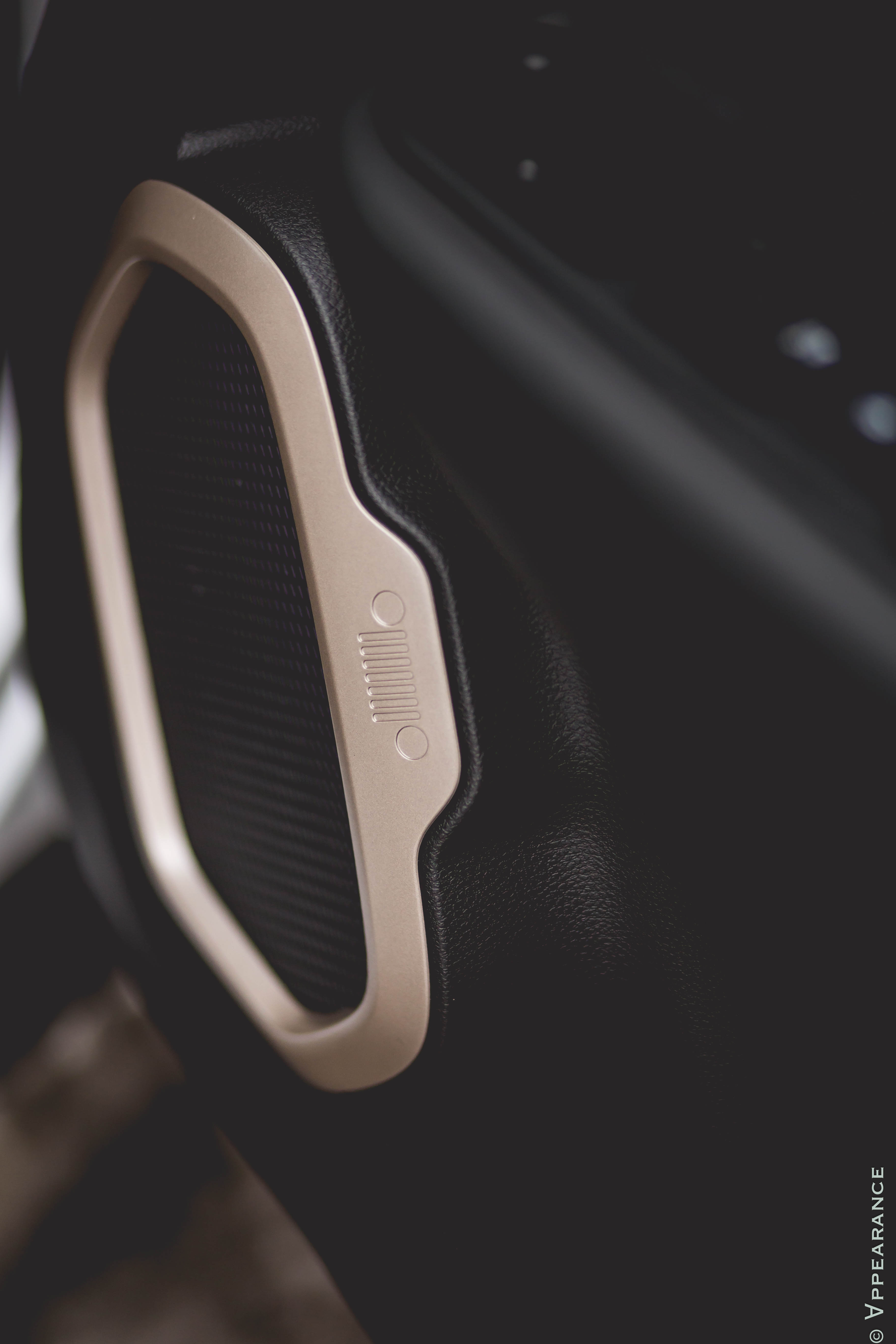 The build quality is surprisingly good for a Jeep in this price range. Yes there are still some hard plastics here and there, but overall, it’s an enjoyable and functional place to be – very much like all of FCA’s current line of cars and trucks.

It Actually Works Off Road 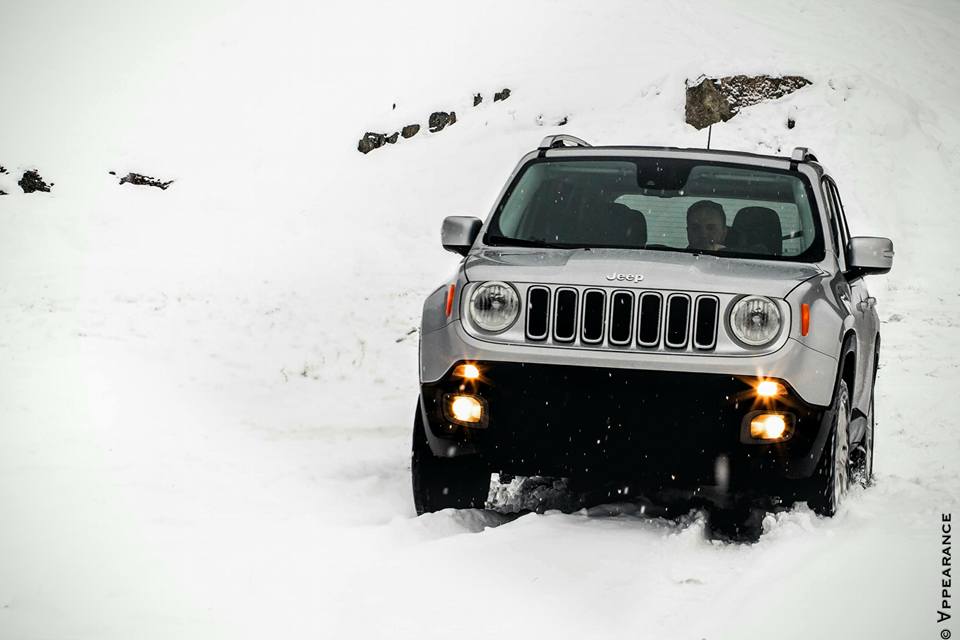 Jeep enthusiasts don’t give a damn about Easter eggs. Or Fiats. They want to know if the Renegade can even Jeep. Yes, this thing may be based on a car platform, but it’s a lot more competent for off-roading than one might assume.

You see, despite being front-wheel drive biased, the Renegade is actually fitted with a real 4×4 system, unlike other models that make do with a traditional all-wheel-drive configuration. This means it’s equipped with brake lock differentials to mimic the characteristics of locking diffs and improve traction on rough terrain. Now, while this may not be as effective as an actual locking diff, brake lock is still a better tool for off-roading than a conventional car-based all-wheel-drive system. According to Jeep, the Renegade has been submitted to the same “Trail-Rated 4×4″ tests as the rest of its lineup.

That being said, since we’re in January and, well, it’s snowy outside, I figured it was appropriate to drive this little breadbox up north to the Laurentians on snowy roads to see what’s what. 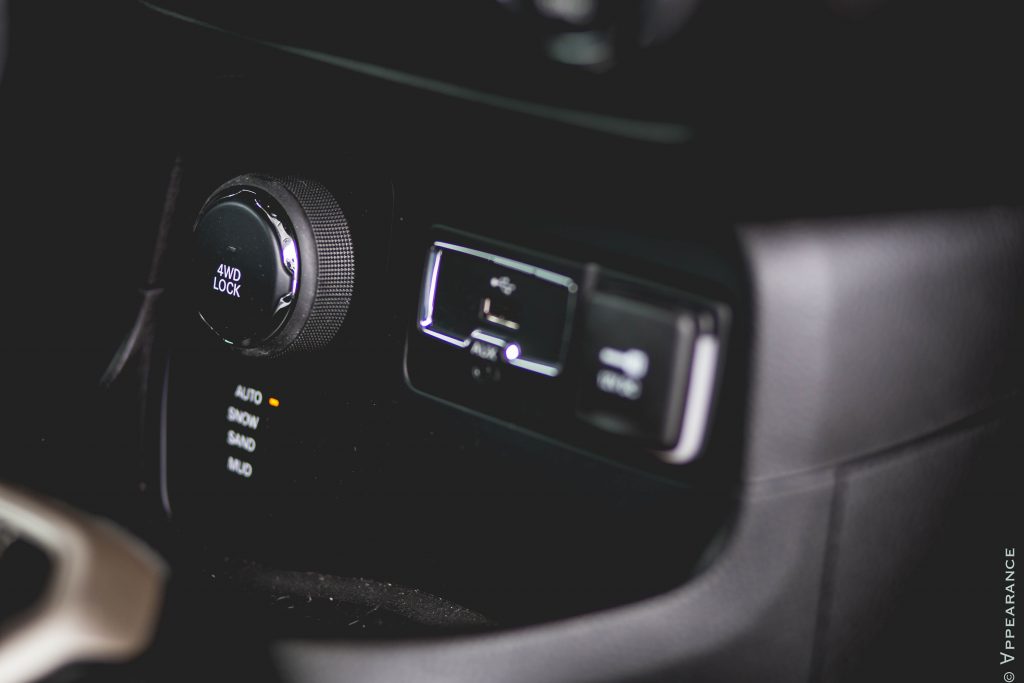 I immediately brought the Renegade to an abandoned parking lot aft of a ski resort. The surface was unstable, essentially frozen dirt/mud, and covered in about 3 feet of snow. It’s the kind of surface that would easily get any car stuck. The Renegade’s default setting is Auto; it essentially becomes front-wheel-drive and engages the rear wheels when slip is detected. The whole effect is seemless behind the wheel. A turn of the big knob located under the HVAC controls allows the driver to choose between different drive modes: Snow, Sand, and Mud. Engaging each mode activates the brake lock feature by default (you can manually remove it in any mode), with engine response and transmission characteristics also altered for each mode. 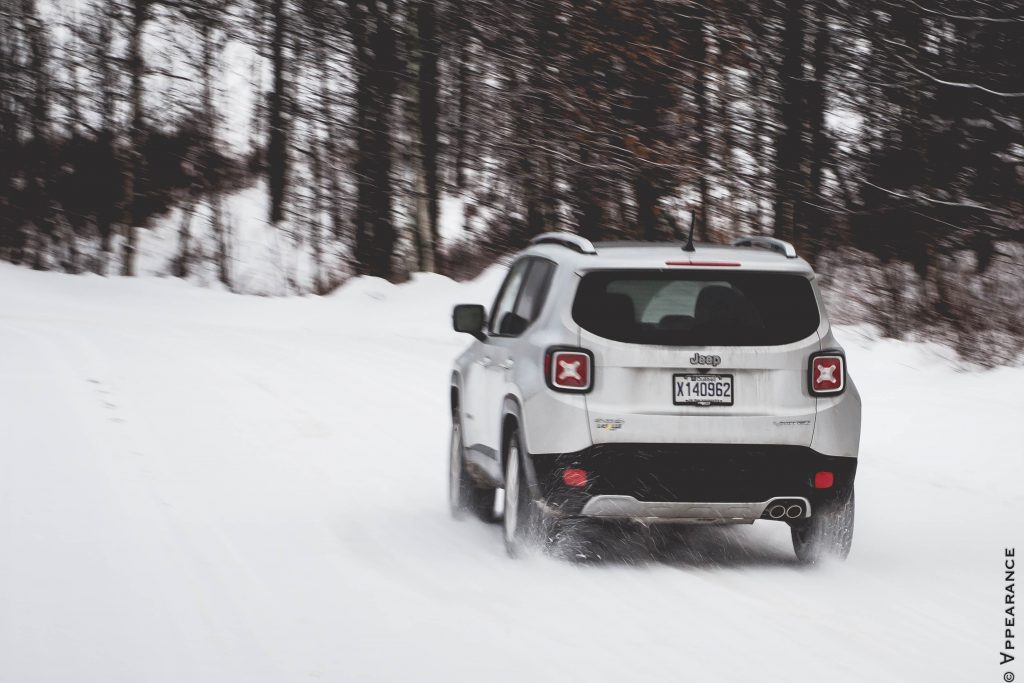 And yes, you can actually feel all of this happening while you sit behind the wheel.

The result is a little trucklet that goes everywhere you ask it to go. Even in situations where it sinks under its own weight, the Renegade always finds a way to get out. We even parked it in deep snow to take pictures and it clawed itself out with very little fuss.

Granted, it won’t climb rocks or drive over trees, but it’s competent enough to keep you out of serious trouble. 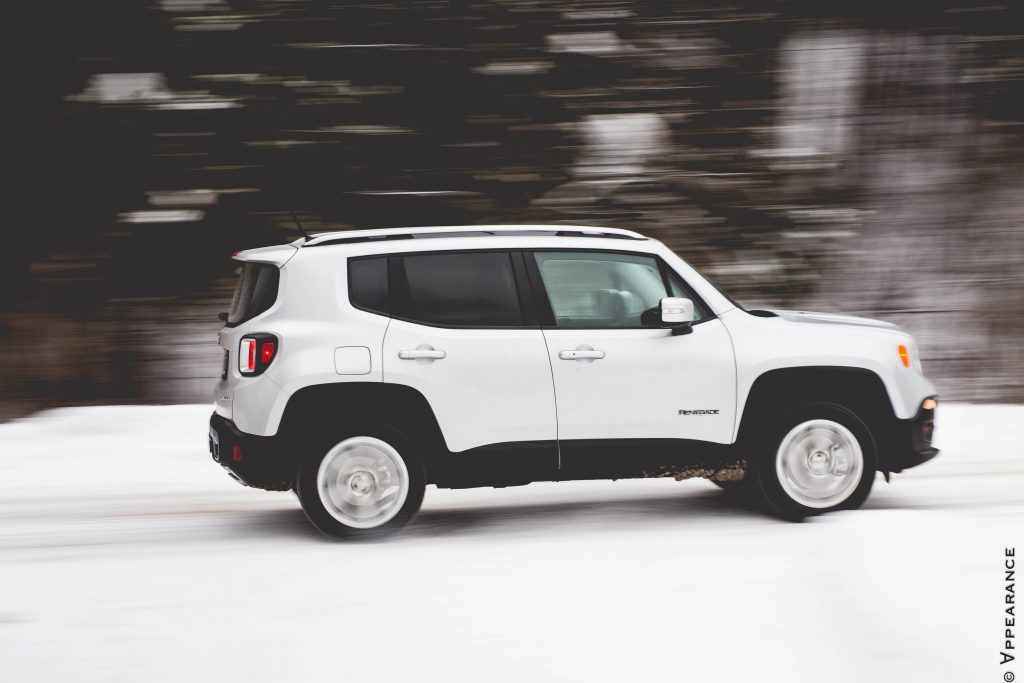 The reason why Chrysler chose the Fiat 500’s platform becomes clear when you take in on the road. The Renegade is composed, compliant, and rather nimble at best. Turn in is sharp, reflexes are quick, and except for the occasional excessive nose dive under hard braking, it feels just as nimble around town as any modern hot hatch.

It’s also easy to see outside from the inside. Except for the ultra-thick A-pillars, the Renegade is overall easy to operate.

Turn off traction control on a snow-covered back-road, get
up to speed, lift off the throttle, and yes, that rear end will lift, gracefully correcting its line in a composed and civilized manner the moment you give it some throttle. The Renegade is playful under all possible road conditions and it’s free of electronic nannies that prevent you from having fun. So yes, it will drift when you ask it to. 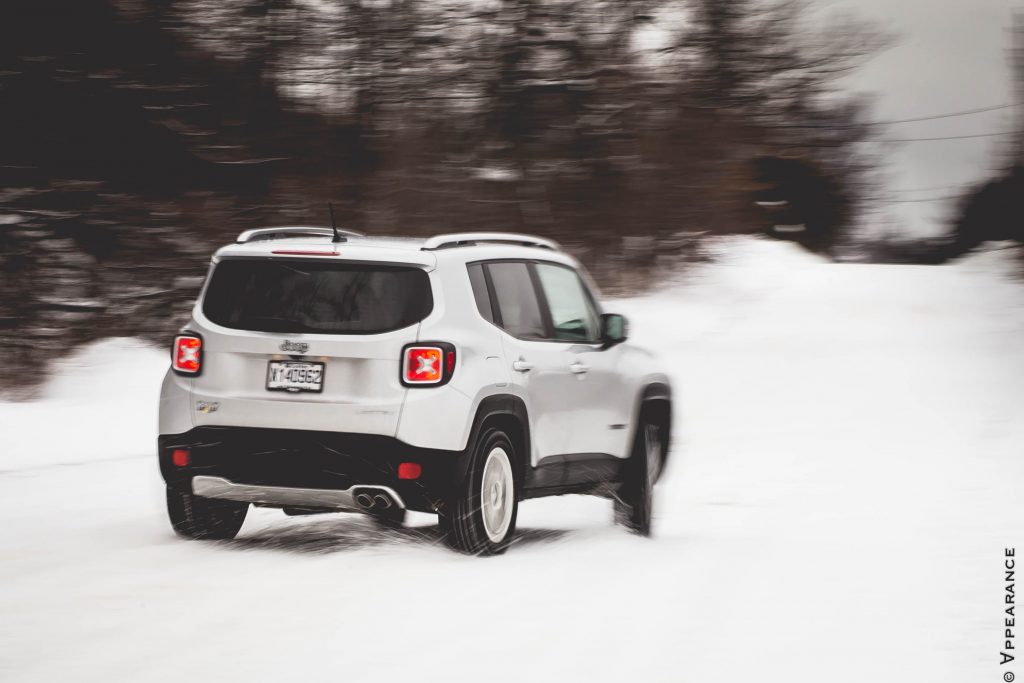 My tester was the full-fat Limited model, of course, which came with all the possible tech in the book such as “leather” seats, dual power sunroofs with retractable panels, an upgraded sound system with navigation, heated seats and steering wheel, and the traditional array of safety systems such as lane departure warning and other useless gizmos. Limited comes standard with the largest of the two available 4-cylinder engines, the 2.4-litre Tigershark good for 180 hp and 175 lb-ft of torque. It gets the job done, but it won’t set your hair on fire. It also sounds mediocre at best. Entry level models make do with a 160-hp turbocharged 1.4-litre engine, the same one found in the Fiat 500 Abarth. That engine comes standard with a 6-speed manual transmission. 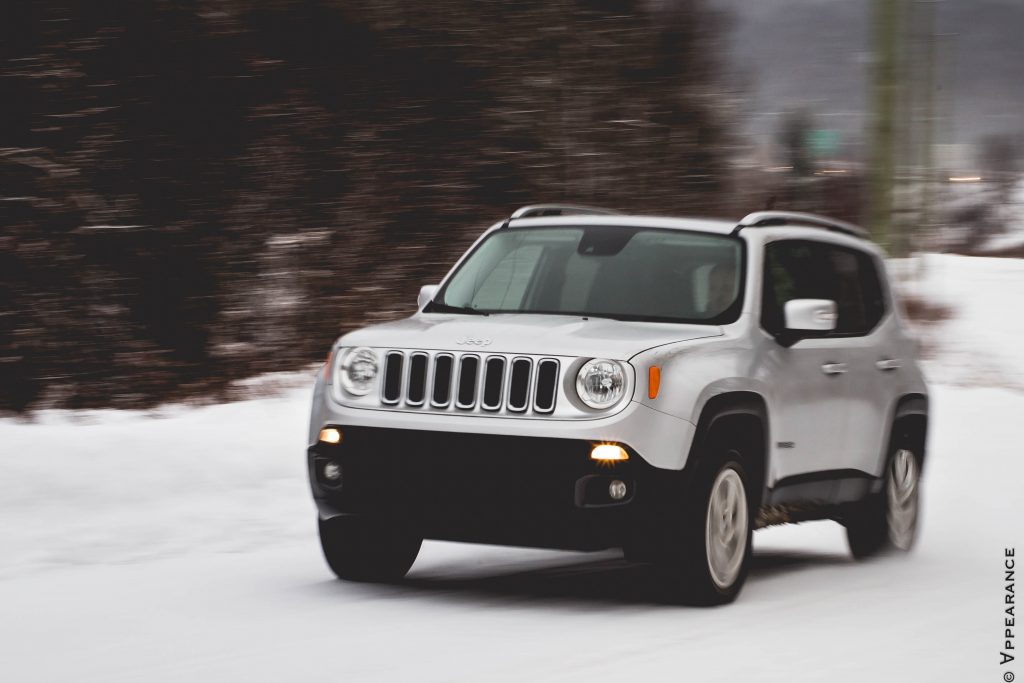 Yes, you’ve read right: the Renegade can be ordered with 4×4 and a manual transmission.

Unfortunately, you can’t get the manual with the 2.4. Instead, it’s attached to the 9-speed transmission that is used in the Chrysler 200 and the larger Cherokee. With this configuration, I was able to keep fuel economy in the mid sixes, even after fooling around in deep snow for an entire morning. Not bad. 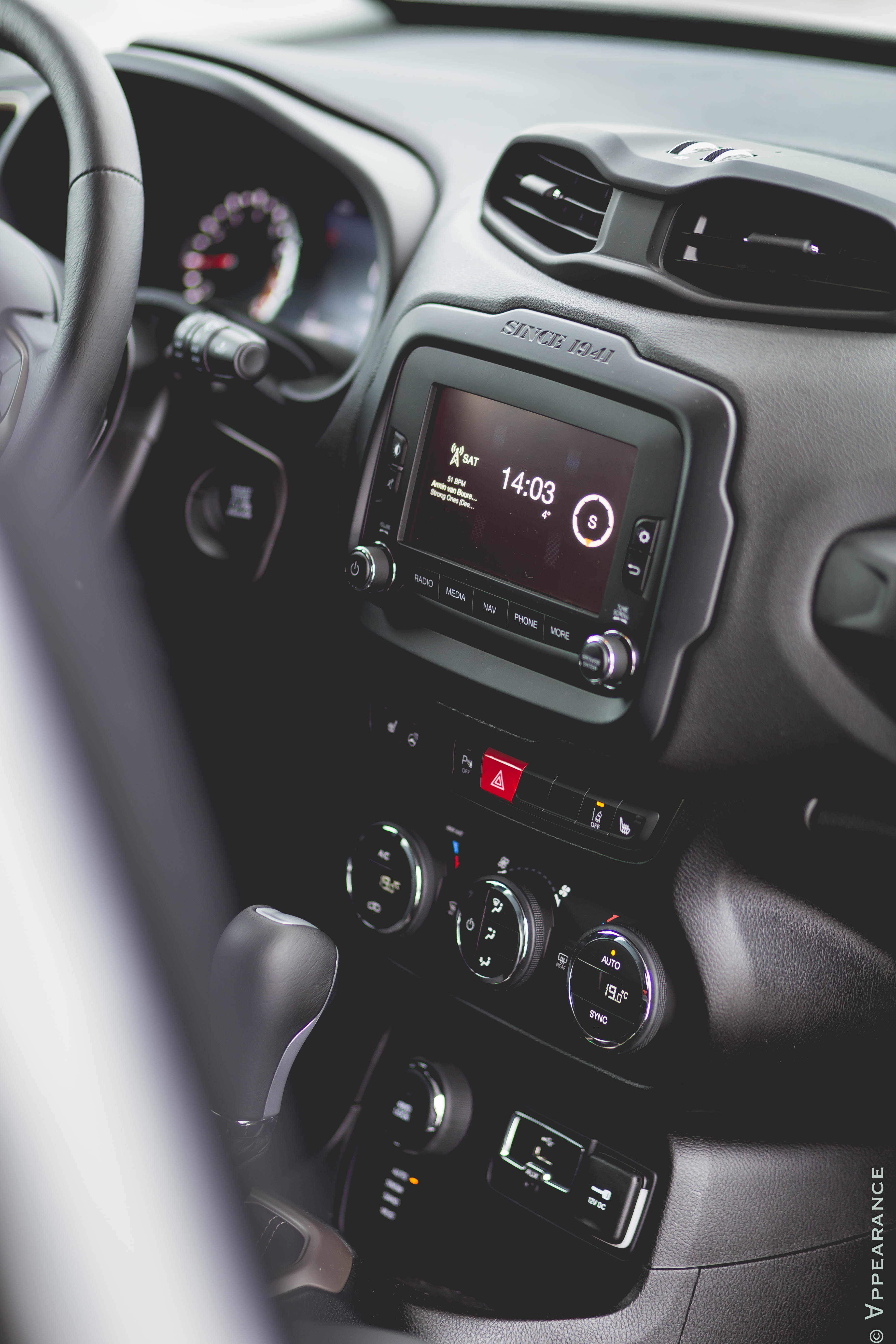 About that 9-speed transmission. Why so many gears? Fine, I get that more gears allow better fuel economy, especially for small engines, but in the Renegade, the 9-speed is always hunting for gears. It also unnecessarily downshifts at every occasion and refuses to shift into 9th at highway speeds.

Why have 9 speeds if you’ll never use the 9th one? 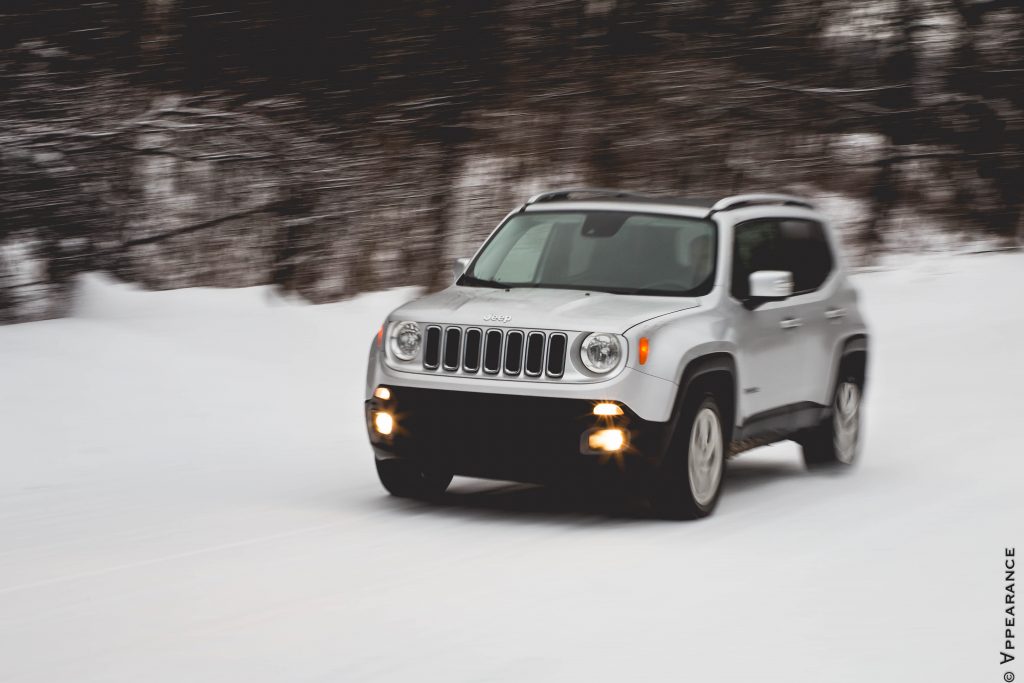 There’s simply a general feeling that the transmission is too much for the engine to handle. It always feels like it’s in the wrong gear. Acceleration from standstill is laggy, as if the system is trying to figure out if it’s in the right gear for takeoff. And more often than not, the 9-speed would emit a worrying clunk sound upon upshifts during cold starts. Yes, you can manually shift the box with the shift lever, but it annoyingly won’t allow you to downshift two gears at once.

Except for improved fuel economy, the 9-speed auto is useless. 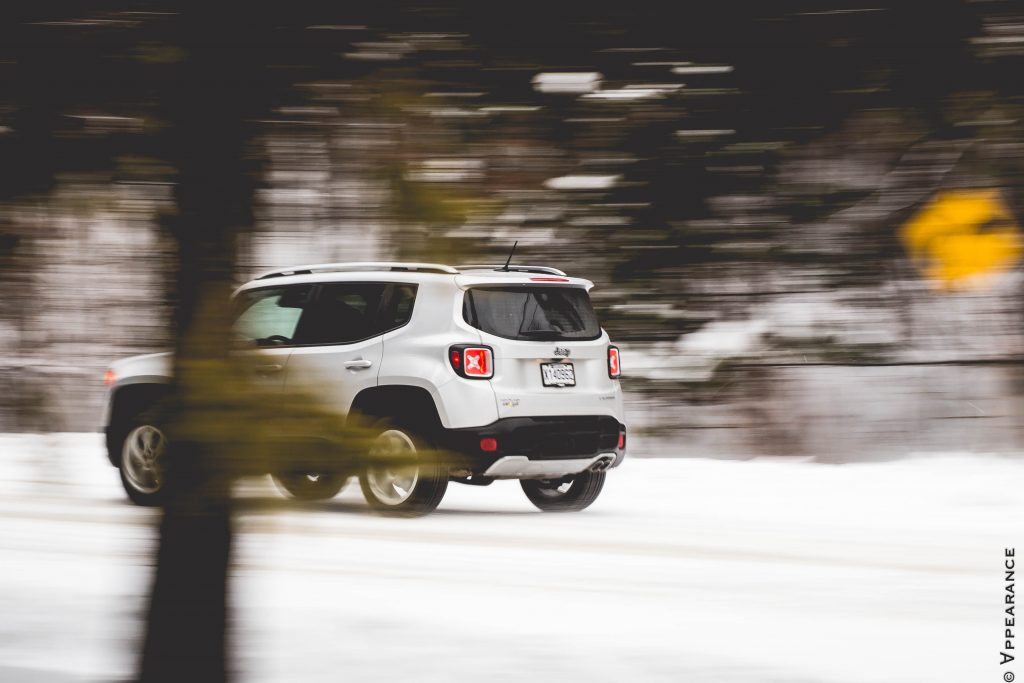 Would I get a fully equipped Limited model? No. In that price range, there are much more compelling offerings.

But I think that a bare Sport model, with the manual transmission and the 4×4 option ticked off would be the closest you could get to a “real Jeep” without ruining your budget while retaining car-like driving characteristics for daily driving. 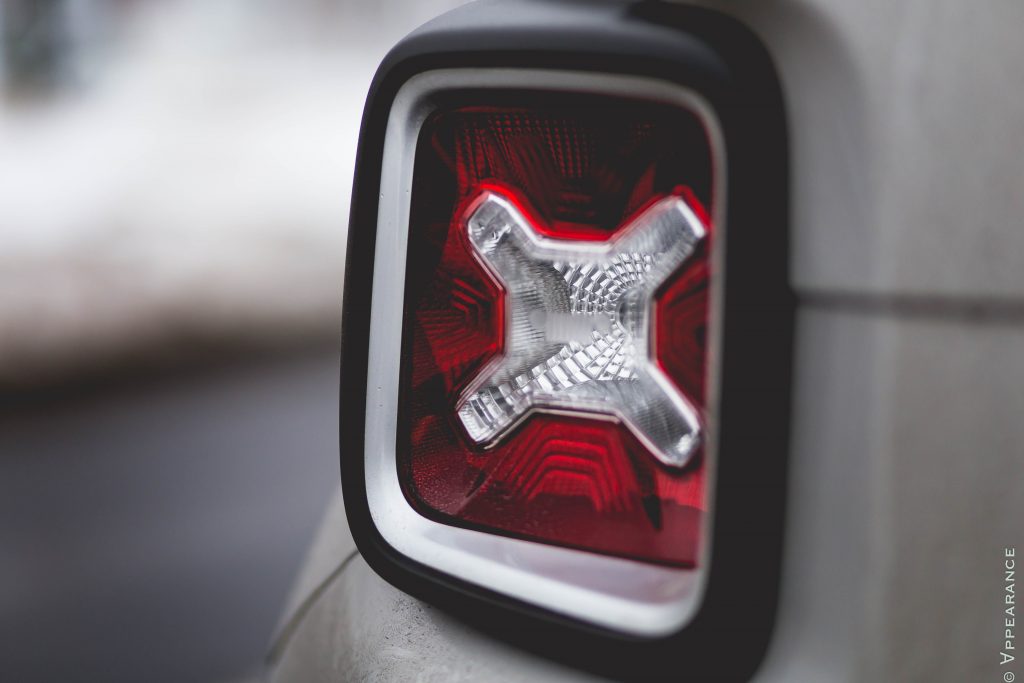 In conclusion, the Renegade may not be as refined as some of its European and Japanese competitors, but it’s clearly a better product in every way than the Compass and Patriot could have ever dreamed of being. With its cheerful and rugged looks, affordability, fuel economy, functional and well-appointed interior, practicality, and surprisingly competent off-road capabilities, the Renegade may be just what the Jeep brand needs to remain competitive in the growing subcompact crossover segment without losing its soul.

+
+ Rugged looks and fun easter egg design cues.
+ Well sorted out suspension and nimble chassis.
+ Enough off road capability to get you out of trouble.