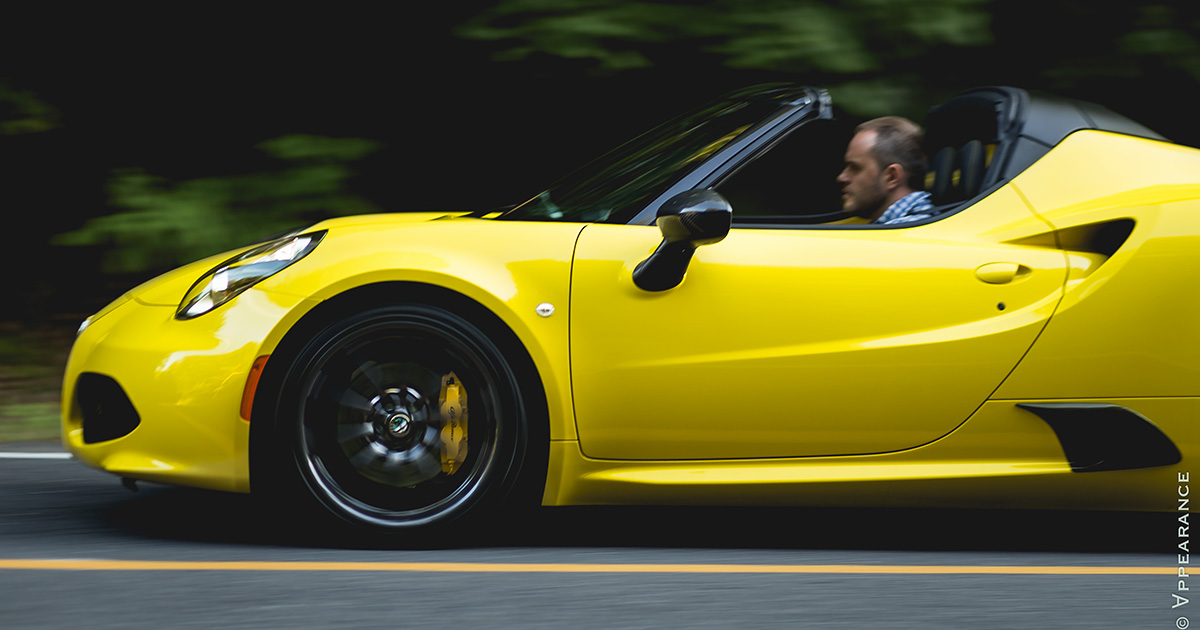 The struggle between wants and needs is usually marked by an undeniable balance between logical thinking and spontaneous emotional decisions. Wants are never essential; in fact, they usually never make a lot of sense. They come from the heart, and sometimes, something so tempting comes along that stabs you right through that heart, blinding any sense of logical thinking.

This is where the Alfa Romeo 4C Spider comes into the picture: it’s that sexy Italian, on a hot summer’s day, that grabs you by the balls and commands you to fall in love with her while your wife is waiting for you at the coffee shop.

It’s the very embodiment of temptation.

There’s Nothing Rational About this Car 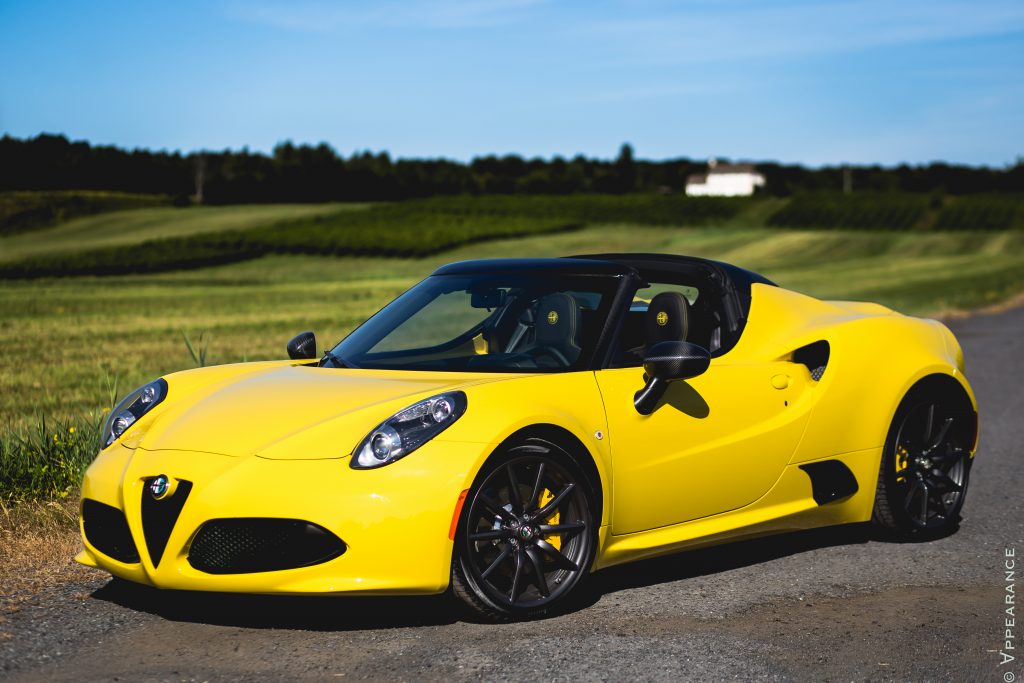 When describing the Alfa 4C, there’s nothing about this car that fits together as any kind of rational purchase. It’s only got 2 seats, luggage space is, well non-existent, especially in the spider. You can barely fit in the thing, the seats are hard, and there’s not much of an actual interior.

The spec sheet is not even that impressive neither: it’s powered by a tiny 1.7 liter, turbocharged four cylinder engine that cranks out less power than a modern minivan.

So, what’s the hype?

This: the Alfa 4C is a violent shot of dopamine injected straight into your veins. It’s visceral, it’s loud, exotic, and electrifying, and that’s precisely what the car world needs at the moment. 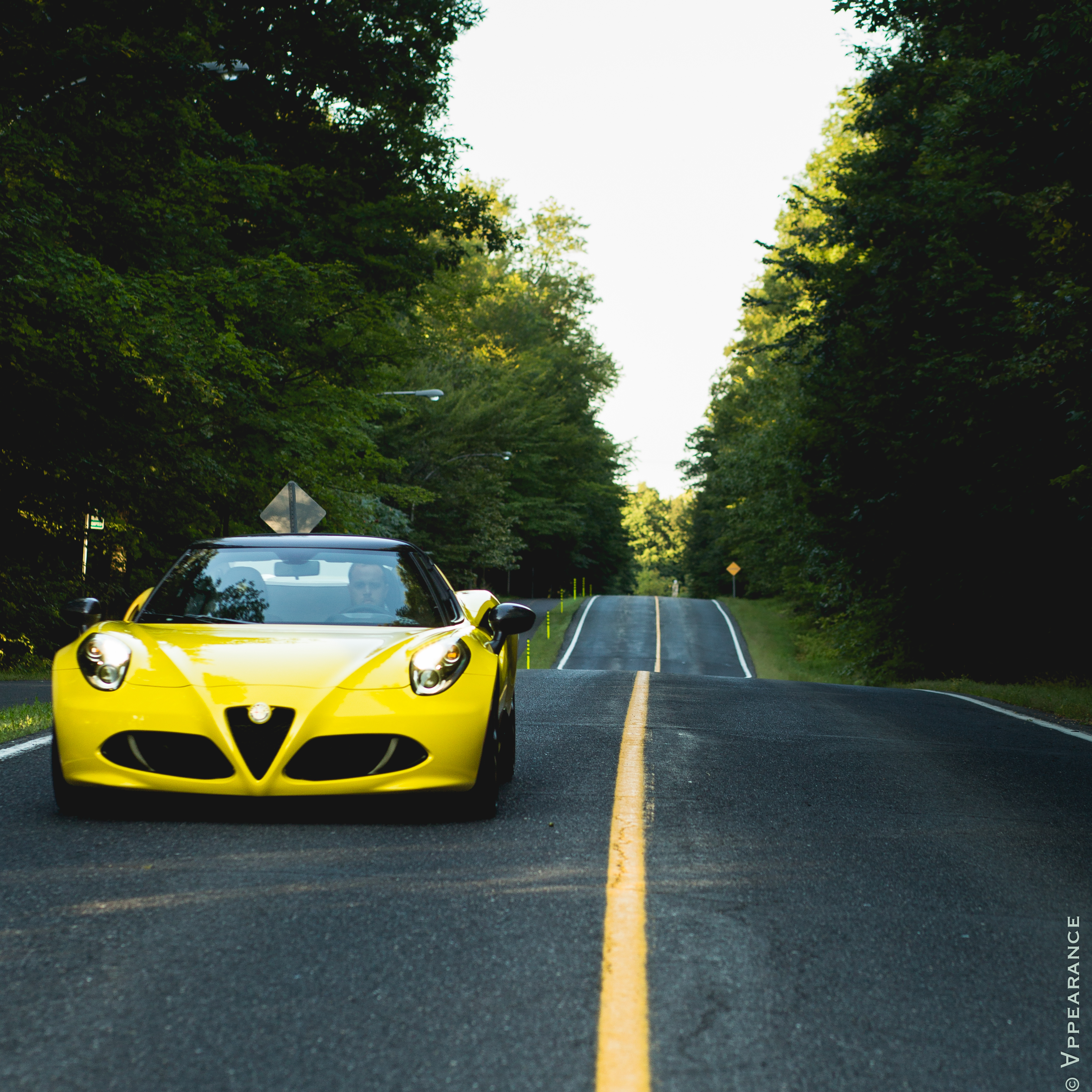 And just look at the thing. 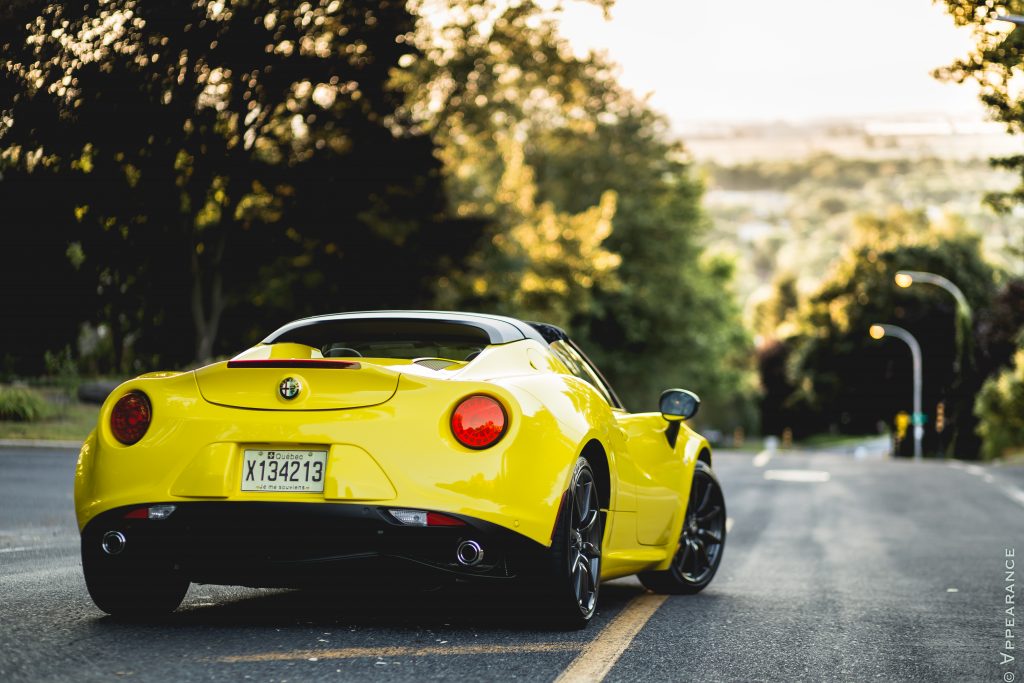 The design language was inspired by the 8C, one of the most attractive cars ever built (in my opinion at least). It’s a small car this thing, with short overhangs, a pretty face, a wide stance, a fat ass, and bulging hips that give way to the intercooler air ducts sitting aft of the door handles.

It’s a truly beautiful thing to behold that attracts a whole lot of positive attention wherever you go. 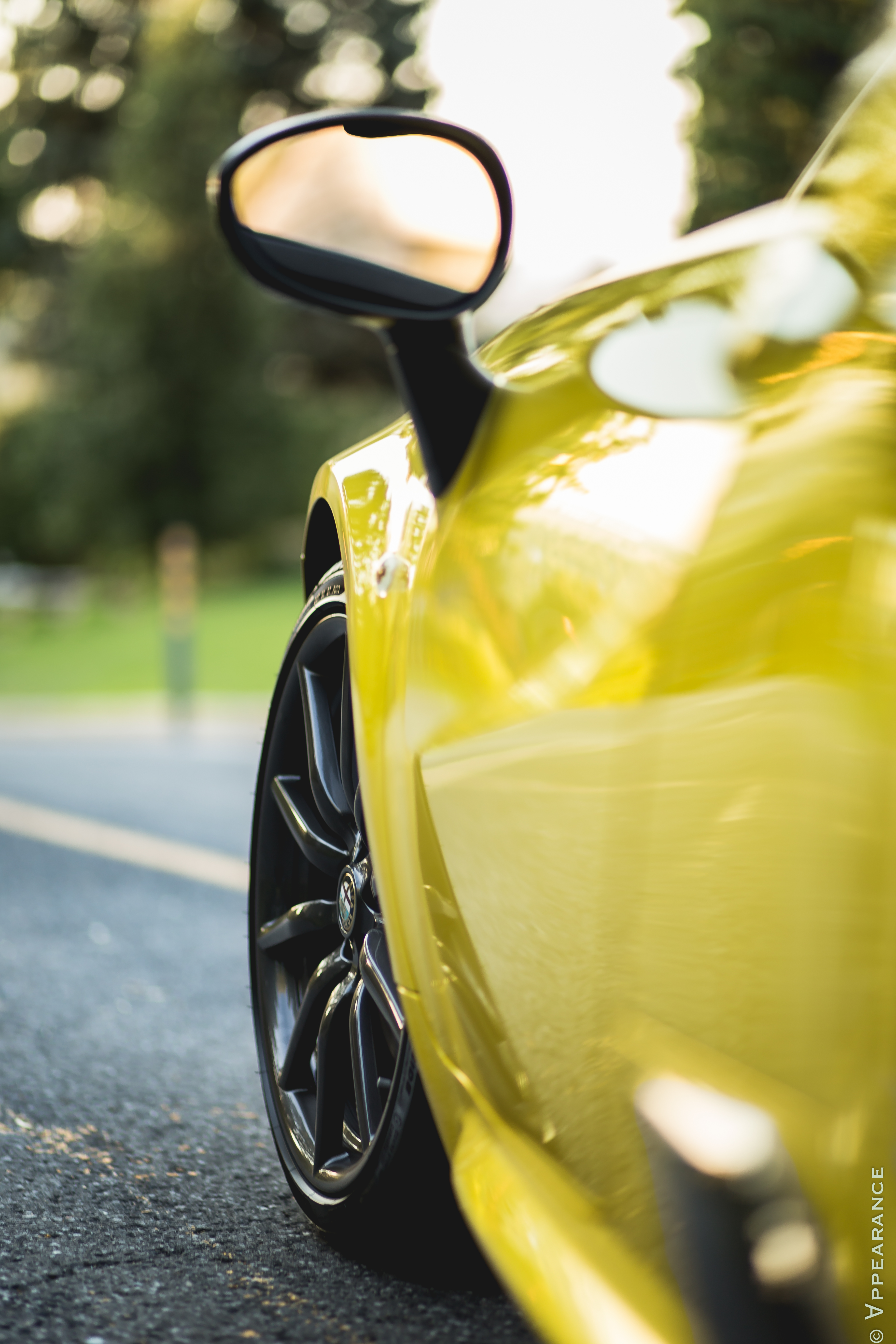 Very much like the Lotus Elise, the 4C is all about obsessive weight reduction. The entire car is made out of carbon fiber, all the way to the mirrors. Its engine was also designed to minimize weight, so it only weighs 1,128 kg. In fact, the 4C Spider is 14 kg lighter than the little Fiat I drove a few weeks ago. So it may only have 237 horsepower and 258 lb-ft of torque, but it’ll sprint to 100 km/h in just 4.1 seconds.

And that’s seriously quick by any standard.

The convertible doesn’t add that much weight either; it’s only 10 kg heavier than the coupe due to a steel bracing added under the engine bay for chassis rigidity.

Yes, you’ve read right. The convertible is only 10 kg heavier than the coupe. 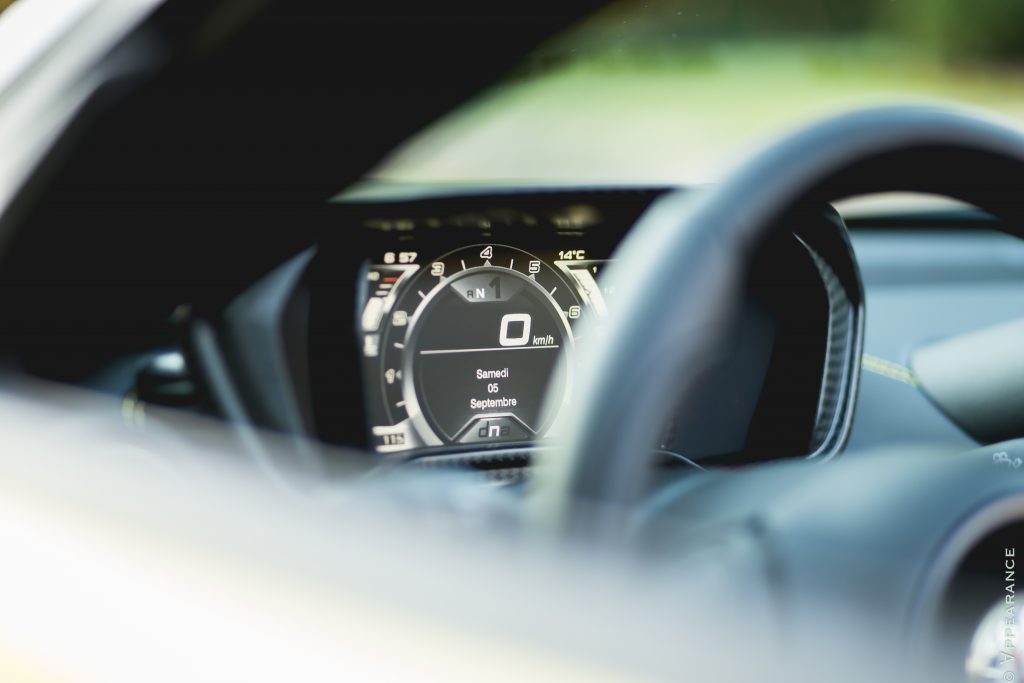 Inside, you’re greeted to a snug, functional interior, where carbon fiber can clearly be seen from all over the place. Like in the 1.4 million-dollar LaFerrari, you’re literally sitting inside a giant carbon fiber tub that makes ingress and egress a rather difficult exercise. 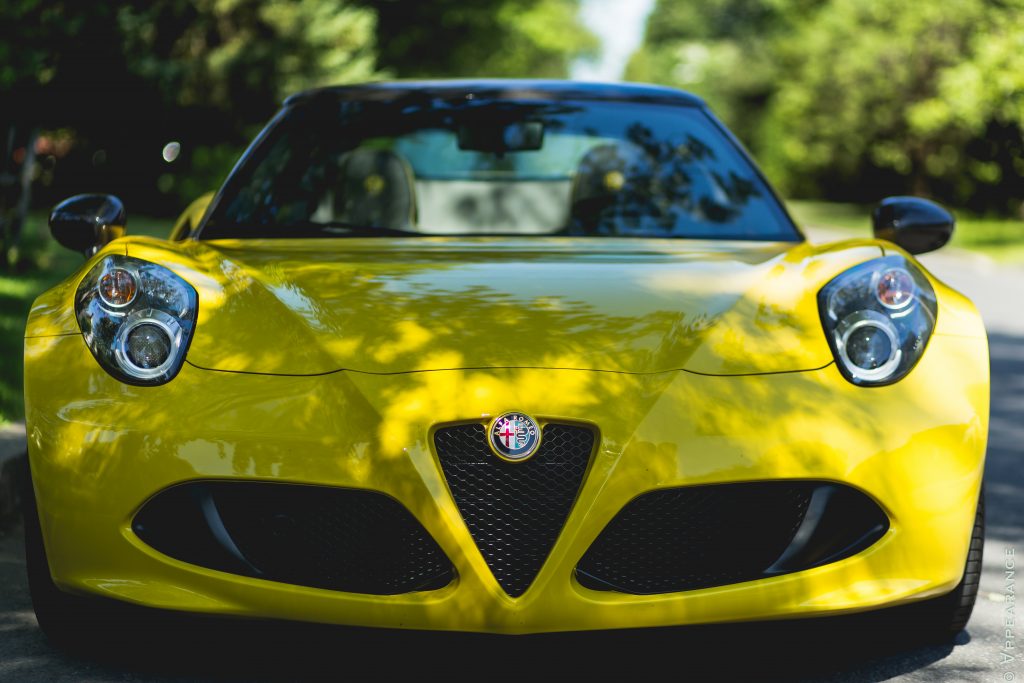 Even the seats are a beautiful slab of carbon with well-designed, leather-wrapped cushions fitted over them. I wouldn’t call them comfortable, they honestly tend to beat you up after a while, but during spirited driving, they work. It’s spartan inside this car, tight, strictly business, with no frills, and no nonsense. There are no armrests, no cup holders, and the only thing allowing you to shut the door is a leather strap bolted onto it. Anything that attempts to be a center console or a climate control knob is basically a piece of plastic taken from the Fisher Price parts bin. Yes, most materials are flimsy, but they’ve at least managed to make everything look good, making for a rather pleasant place to be. 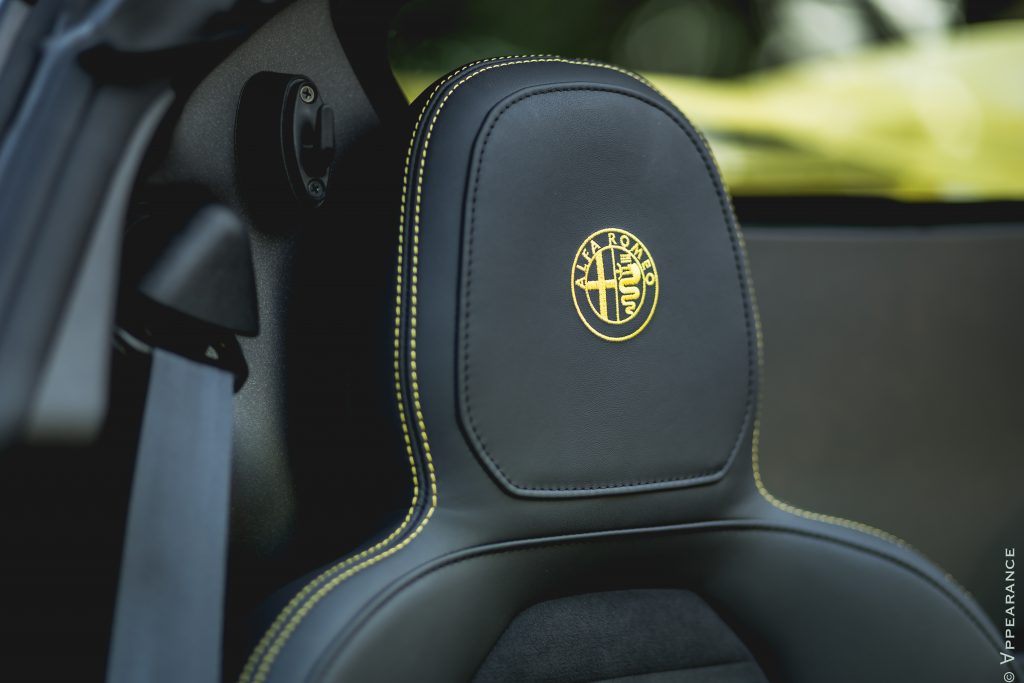 The touch points are also enjoyable: the steering wheel, a thick, flat-bottom one, with a pleasant grip is well positionned thanks to telescopic and height adjustement. The pedals are a beautiful duo of detailed alumunium and perfectly placed for heal-toe driving. The instrument cluster is also straight forward and well layed out, basically an LCD screen sitting in a carbon fiber casing. In front of the center console, just under the HVAC controls, you’ve got the push buttons for the transmission (not a fan of these) and the DNA switch (more on that later), all presented in an elegant mashup of brushed aluminum and carbon fiber. 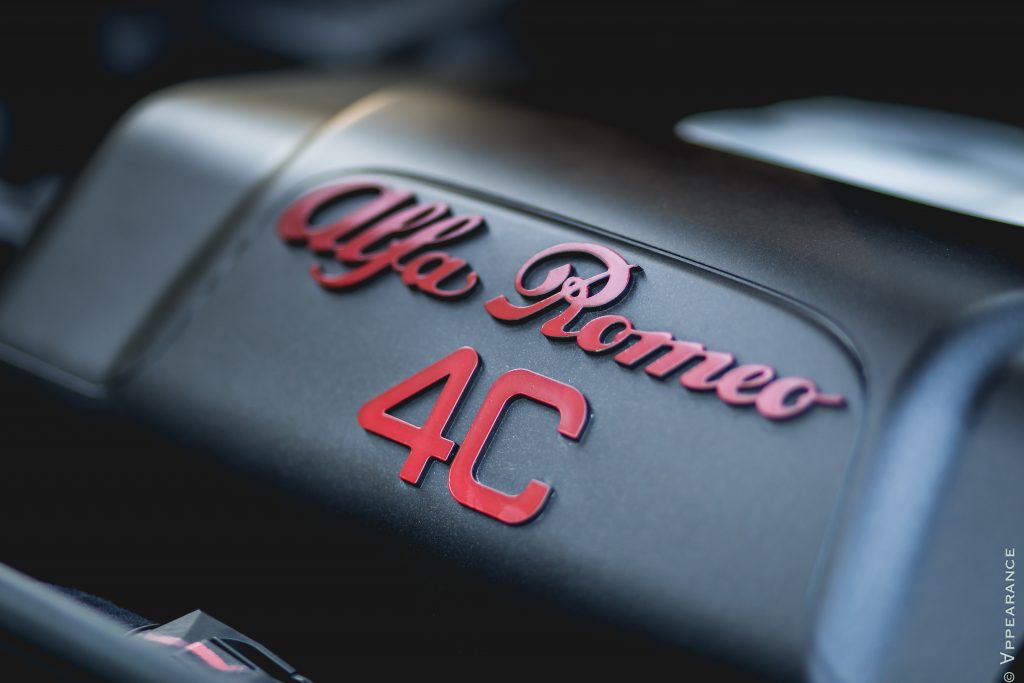 All of what you just read though, the flimsy interior, the hard seats, and the hard plastics, well it won’t matter the moment you’ll start driving this thing. That 1.7 liter back there, mounted right behind your head, well it sounds completely insane. It seems that in Italy, the template for sports car sounds is loud.

From idle, all the way to its 6,000 rpm redline, the little four punches way above its weight and sings a pissed off rocus of turbocharged madness that can be heard for miles on end. 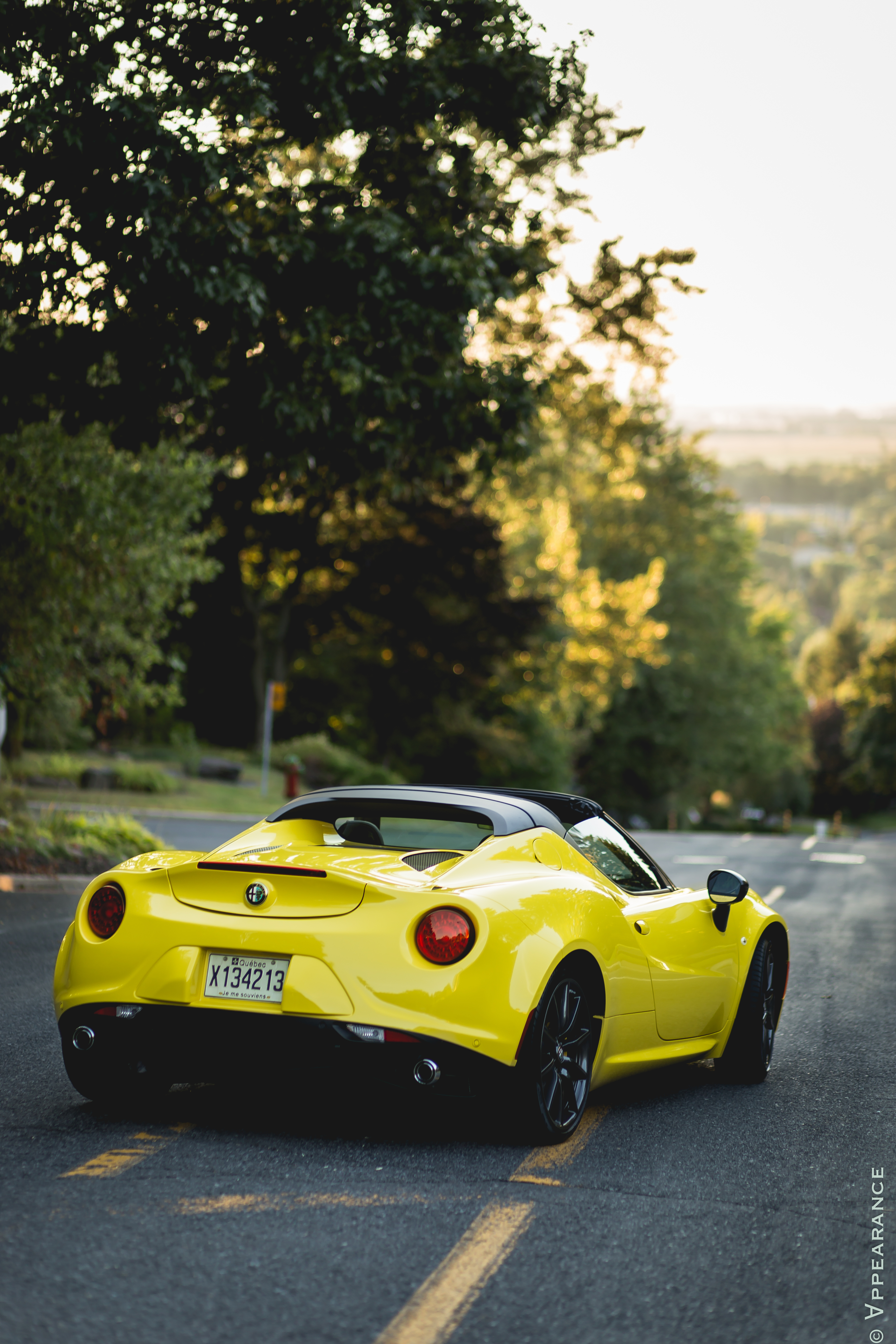 There’s absolutely nothing subtle about the way this thing sounds. It’s not exactly what you would call a refined music, but rather an amalgam of decibels that adds to the euphora of driving the 4C.

In fact, it’s so loud, we woke up an entire neighborhood during filming at 6 am.

What I enjoy the most about the way the 4C emits its chorus is that you get the sense that Alfa Romeo want you to know there’s a turbo under that hood. They’re not trying to hide anything. You hear the wooshes and whines and there are actual “tututuh” wastegate sounds when releasing the throttle. And that’s a refreshing sound in a world filled with muffled turbocharged engines and sound symposers. 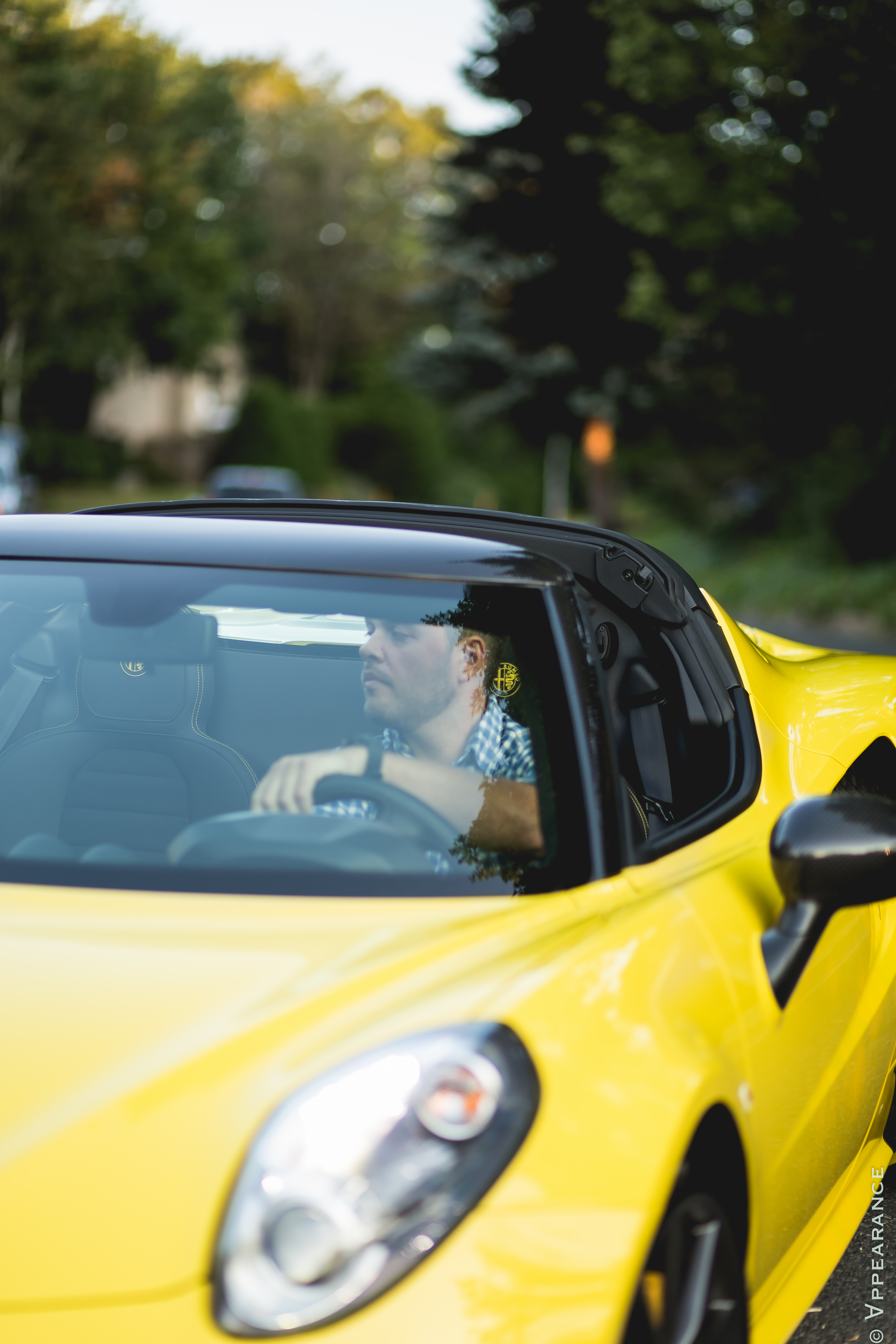 Add to that a throaty exhaust note with the occasional snorts and farts here and there upon upshifts, very similar to what you get in the Fiat Abarth, and you’ve got yourself a recipe for one hell of a grin on your face.

Pull back the left paddle shifter, and the 4C’s 6-speed dual clutch system drops a gear without hesitation. The system works well during spirited driving but tends to lag behind in everyday use, especially when taking off from a standstill where you really need to give it some throttle to get it going. 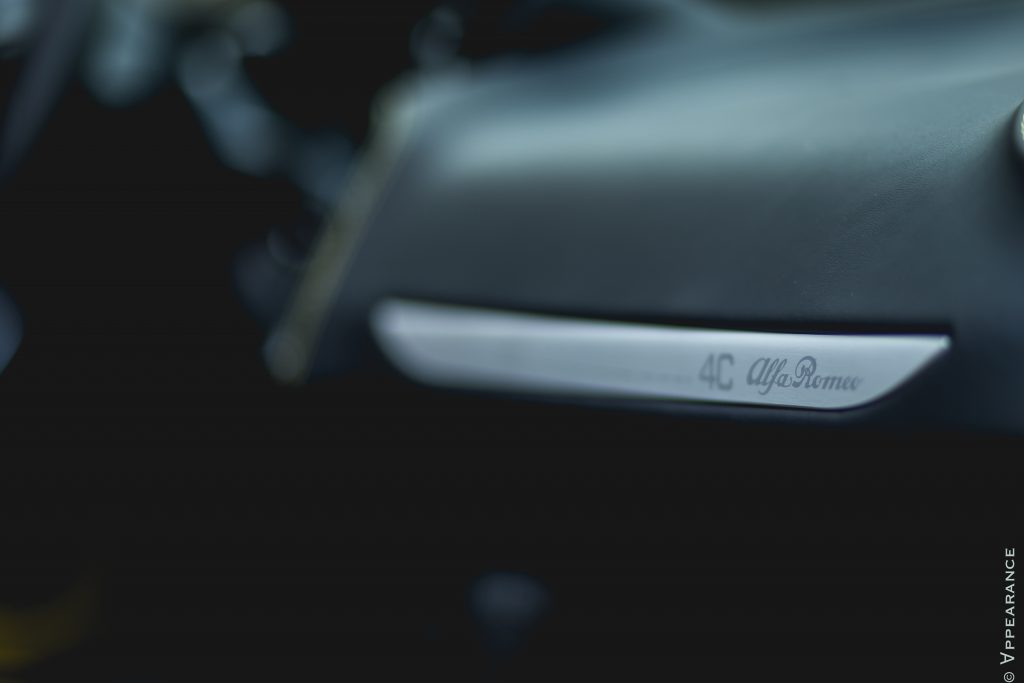 Get the ball rolling though, and gear change is crisp, lightning quick, with downshifts accompanied by a slight blip of the throttle. There’s always a light whistling sound coming from the air intake sitting on your left caused by the spooling turbo. Smash that go pedal, and you’re immediately shoved into your seat with a visceral wave of torque generated from the boost. The little four revs violently to redline, force fed the entire way, keeping the driver awake in every single gear. And because there’s no roof, the entire sensual experience is cranked up to 11.

Handling From the Gods 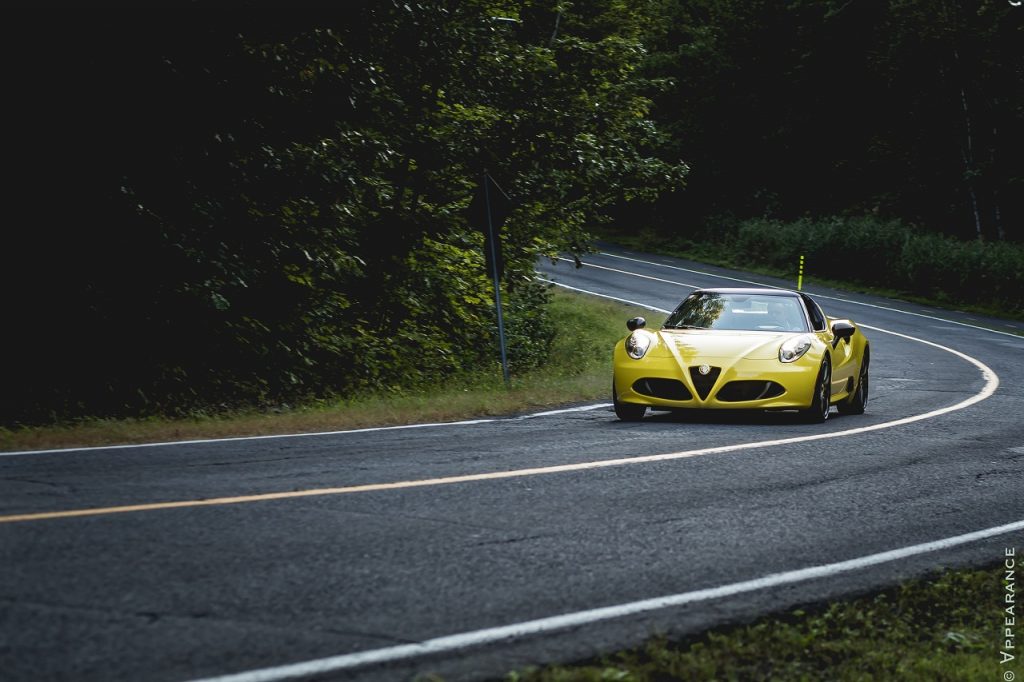 Handling is pretty much telepathic too. Point it in the direction of your choosing and the tiny Alfa will scoot there without hesitation. The fact that this car is as light as a feather makes it nimble and razor sharp. There’s no power steering, so you feel everything the front wheels are doing, reacting instantaneously to each steering input as if the steering rack was hi-wired directly to your brain. 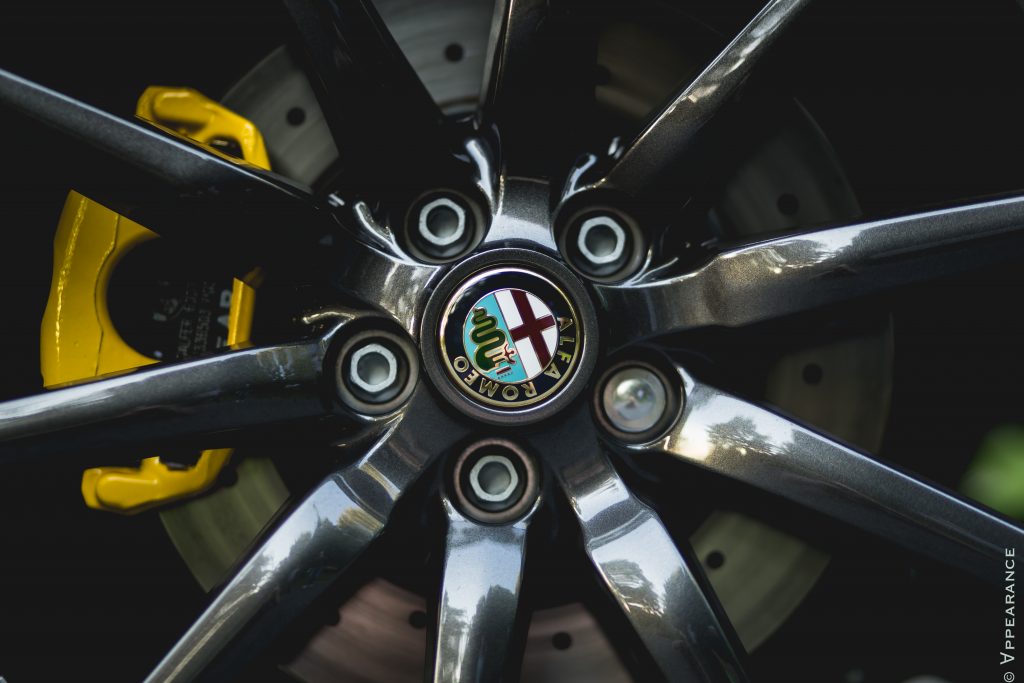 The Alfa is a scalpel on wheels. In the bends, body roll is non-existent thanks to a wide stance and a low center of gravity. Chassis dynamics couldn’t be more precise and the lack of weight make everything feel easy and light. You can give this car a spanking all day long, and there’s always a sense that it can never take too much abuse.

And suddenly, all logic has escaped from your head. You forget about the car’s shortcomings, you forget about its price, your heart is pounding, you’re hands are shaking, and every fiber in your body keeps asking for more. The 4C beats you up and keeps asking you if you’ve had enough while it’s punching you in the gut. It’s euphoric, and after a few hours of driving it, you’ll want to take a break.

But trust me, you’ll come back for more. 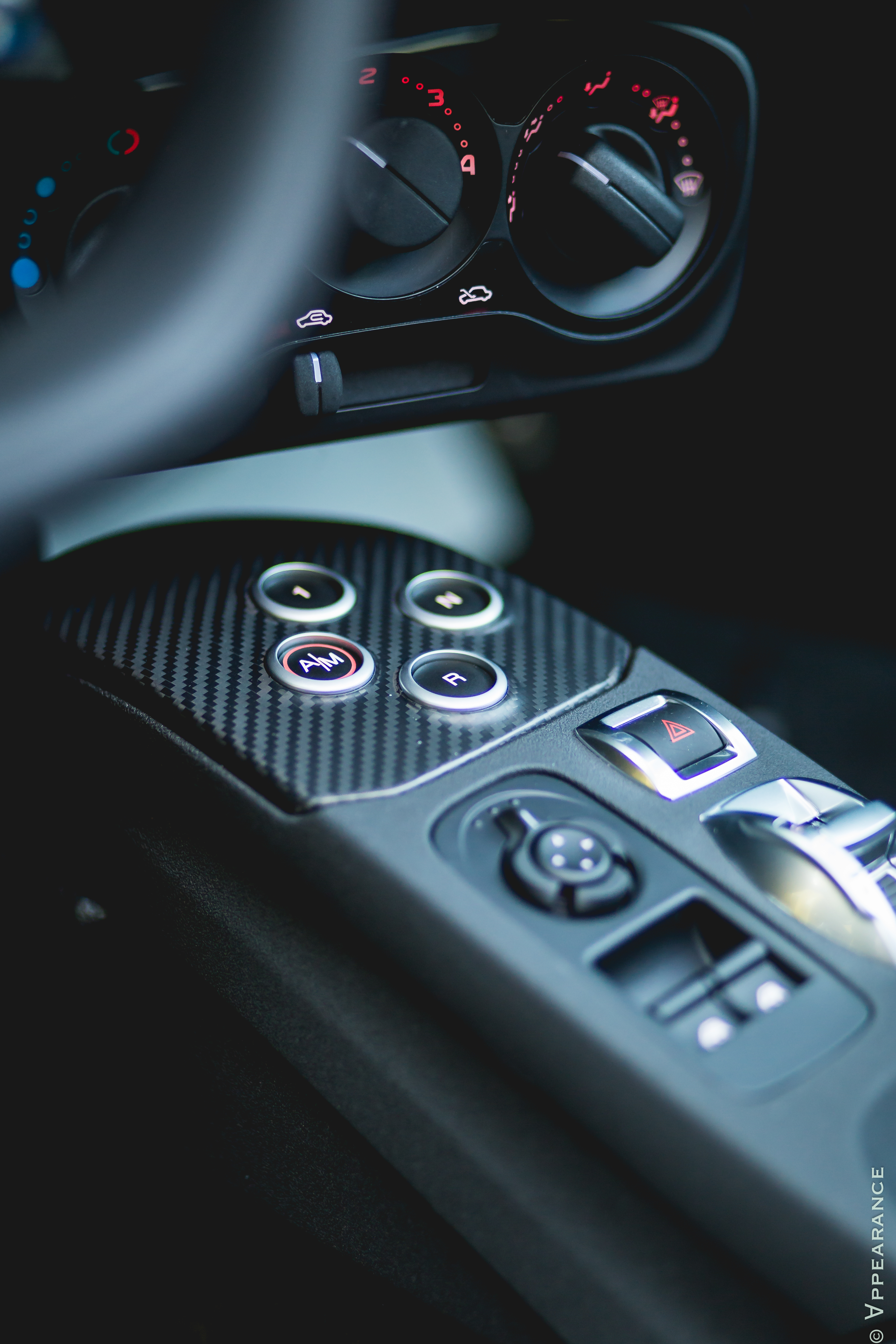 The 4C comes with what Alfa calls the DNA switch, a selection of pre-configurable settings (Dynamic, Natural, and All Weather) that have the potential to completly alter the car’s characteristics.

Unfortunately, my tester was still in the break-in period, so I was unable to try Dynamic mode, a system that apparently removes all electronic nannies, improves throttle response, and allows the driver to engage the Lamborgini Aventador-style launch control system for perfect acceleration times.

My test drive was done in Natural mode the entire day, the car’s default setting, which still allowed me to have some fun while maintaining some restrictions in first and second gear to prevent any sort of drama.

And I don’t really get why they fitted an All Weather mode in a car like this. 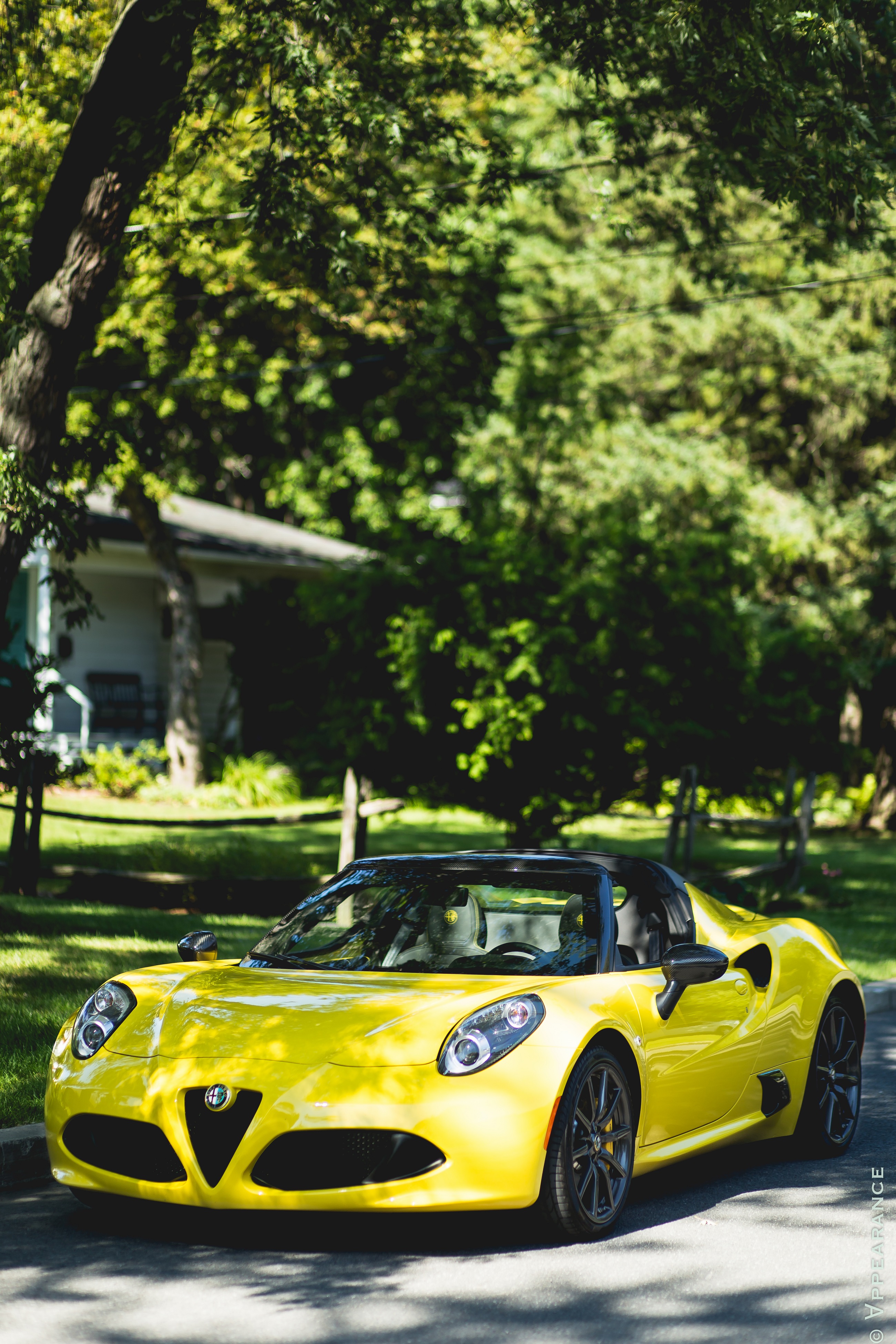 In both coupe and spider versions, the 4C slots right smack in Porsche Cayman/Boxster territory, cars that, until now, never really had much competition.

And while many will argue that you can get a well equipped, more comfortable, and more luxurious Boxster S for less money, the Alfa gives you something the other two don’t: Italian flare and character.

In all honesty, next to the 4C, the Boxster/Cayman brothers are frankly pretty boring. Factor in exotic good looks usually found in cars costing over $200,000, a chassis tuned to utter perfection, and an engine note to die for, and the Alfa Romeo 4C Spider suddenly becomes one hell of an interesting proposition in the sports car world.

That being said, the return of Alfa Romeo to North America couldn’t be more significant than with the arrival of this sexy and electrifying exotic sports car.

Review of the 2016 Alfa Romeo 4C Spider by William Clavey