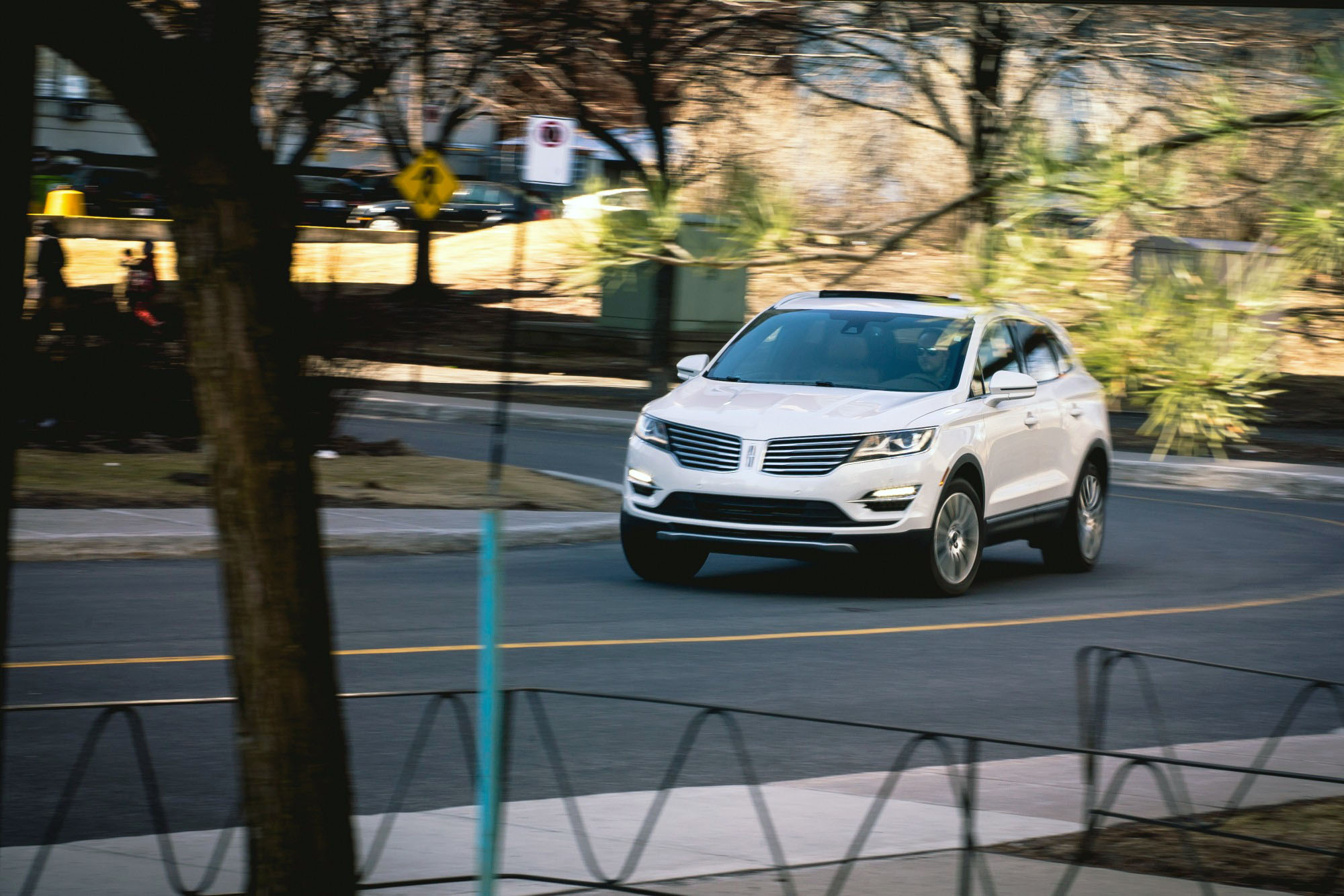 Walk into a Lincoln dealership, and your entry points in the lineup are the MKC compact crossover and the MKZ midsize sedan, both sold at the same entry price and serving as a welcome to a car brand you’ve likely been oblivious to up to this moment. In an attempt to rejuvenate its image and attract new millennial money into its showrooms, Lincoln’s entry level models, more so than any other product in its lineup, must first and foremost convey the brand’s identity, heritage, and value proposition.

If I were to ask you today what a Lincoln is supposed to be, would you be able to answer?

I know I was baffled for a while. Before driving the MKC, I’d see it as a feeble corporate attempt at selling a Ford Escape with fancier headlights for several thousands of dollars more. But after spending an entire week in one, I think I’ve finally pinpointed what a Lincoln actually is. Here goes.

Find Your Own Style 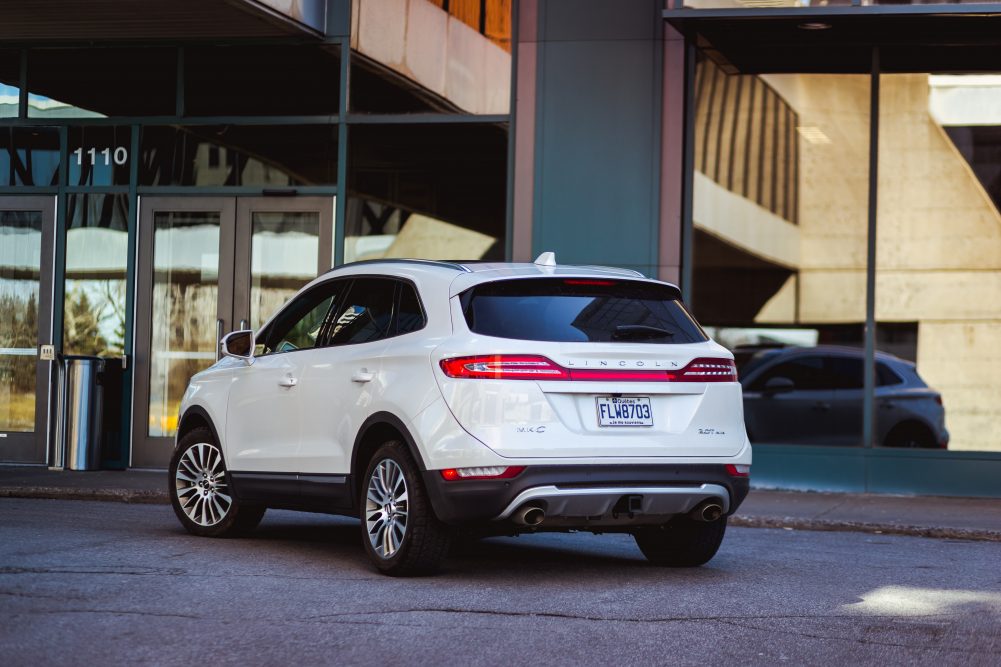 Since compact crossovers are the hottest within the hot segment at the moment, especially the luxury ones, the MKC is a key vehicle for the Lincoln brand. North Americans seem to be aggressively addicted to the concept of driving something high off the ground, equipped with mediocre all-wheel-drive capability and an abundance of doomed-to-crack leather, flashy chrome, LEDs, or other “nouveau riche” creature comforts the start-up generation may want in a vehicle once they’ve made it in life (or at least, believe they did). 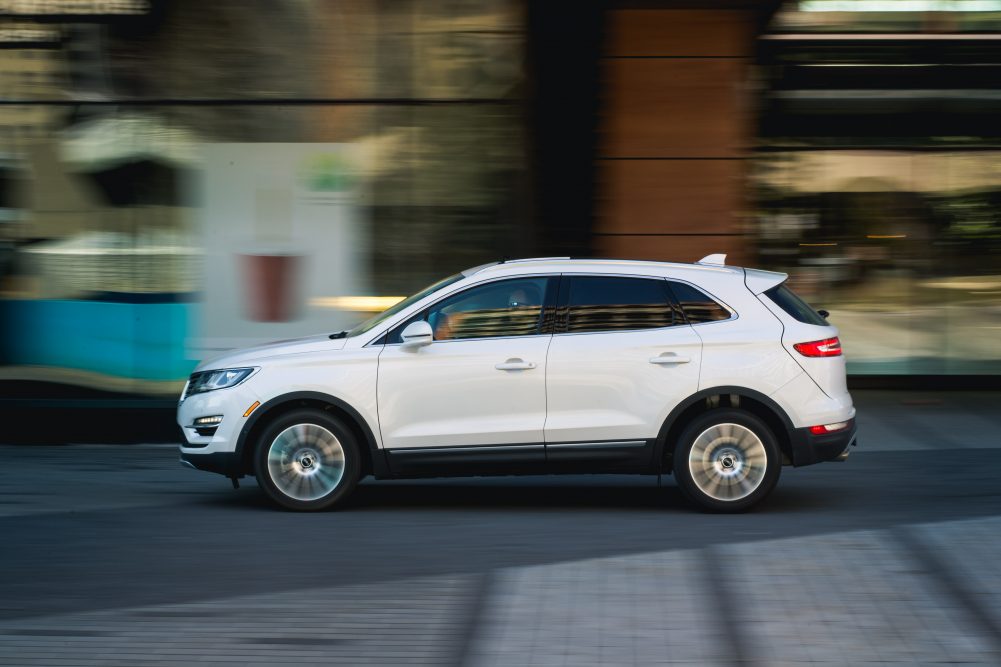 The MKC attempts, and surprisingly succeeds at wrapping these bandwagon features in an elegant, modern, and still purposeful design that doesn’t try to copy, but rather comes through as its own distinct offering. Yes, it relies heavily on the Ford Escape’s mechanical components, but Lincoln has done a fantastic job of hiding its underpinnings. There are absolutely no signs of the Escape in the way the MKC looks. Even the doors are different. Elegance is definitely the theme here, and the moment you see any Lincoln vehicle on the road, you recognize it as just that. The MKC gets the “wings of an eagle” front grille, squinting headlights, and horizontally challenged LED bar that make up its rear taillights.

As far as getting its image right, Lincoln has finally nailed it. 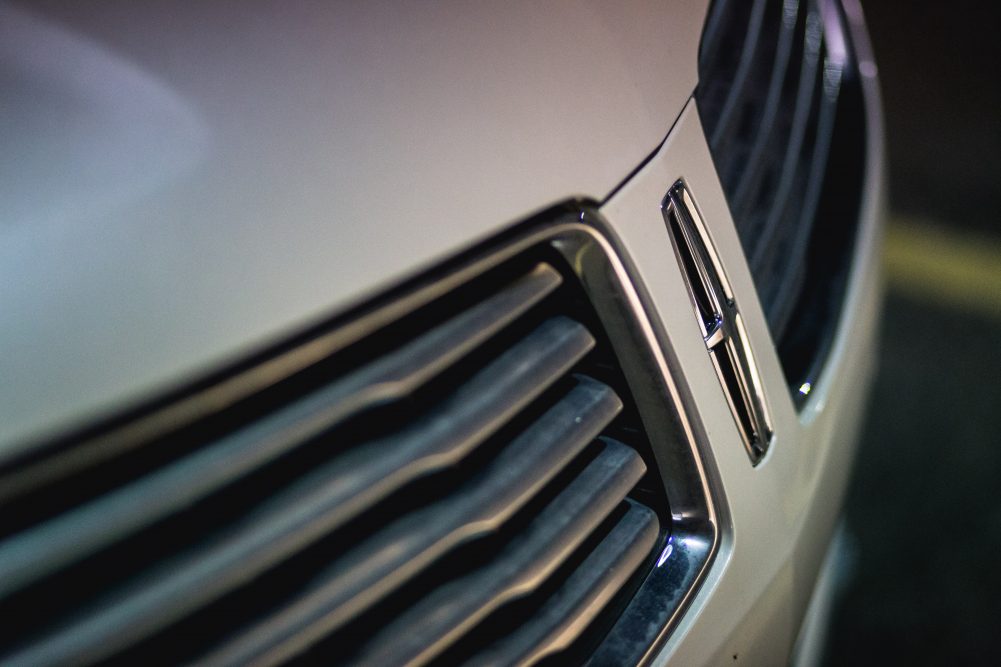 If you find the MKC is proportioned similarly to an Audi Q5, you’d be right. At this precise moment Lincoln product planners are high-fiving themselves, because the MKC is aimed directly at the Q5. That and all the other popular luxury compact crossovers out there such as the BMW X3, Mercedes-Benz GLC, and the Land Rover Discovery Sport I reviewed a few weeks back. 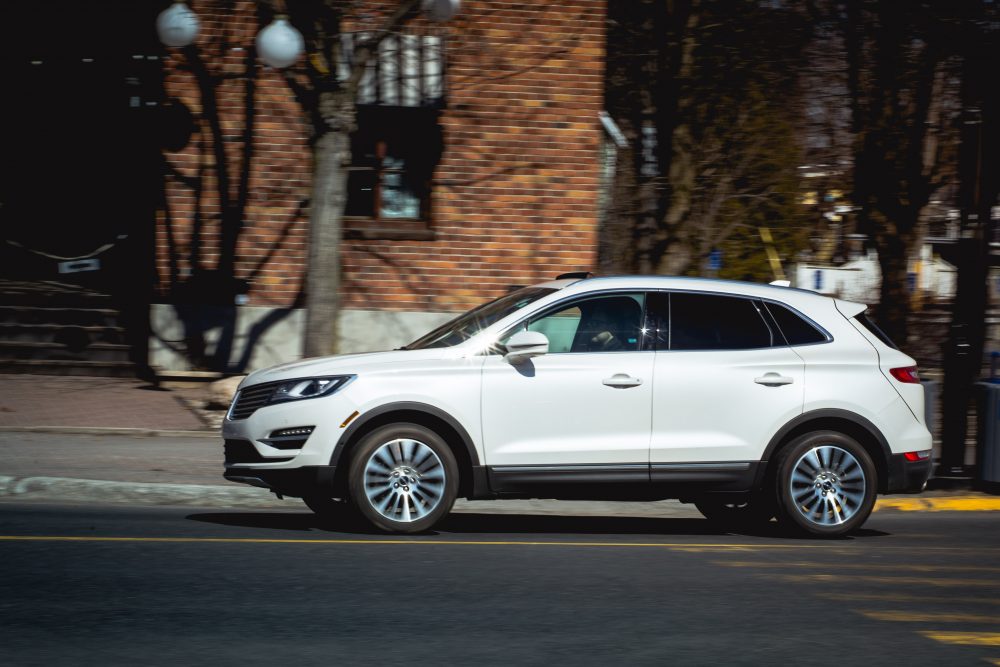 Lincoln would be proud to tell you that in the last decade, registrations to their vehicles among women have increased by 45 percent. For the MKC, women buyers represented 59 percent of overall Lincoln growth in 2016. Was attracting women intentional from Lincoln? Considering luxury crossovers in general seem to appeal more to the female gender, especially young, affluent mothers and soccer moms, I’d say yes. Well-played, Lincoln.

So, how different is this than a Ford Escape? The drivetrain is more-or-less identical, for the entry-level base MKC at least, which shares the Escape’s 2.0-liter turbo good for a claimed 240 horsepower and 270 lb-ft of torque. That’s the one I was driving around in. Those wishing a bit more nerve from their Lincoln trucklet may opt for Ford’s corporate 2.3-liter turbo four, with a claimed 280 horsepower.  For the Canadian market, all versions of the MKC come standard with all-wheel-drive, power is sent to those wheels via a six-speed automatic, the same one as in the Escape. 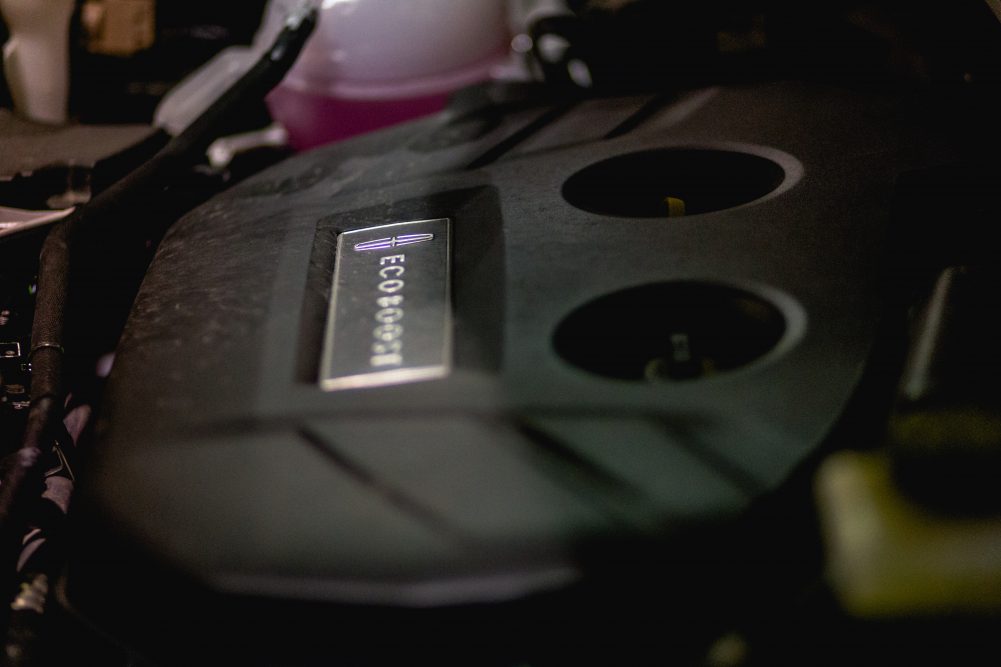 Now, Lincoln is serious about making the brand desirable again, and it shows. Ride and handling feels considerably different than any Ford product I’ve sampled, with exemplary comfort and a supremely quiet cabin. That’s due in part to a whole new set of suspension components, and notably different dampers. You could compare driving the MKC to riding on an air mattress. The suspension calibration was tuned mostly for comfort. That, or a barge. The MKC doesn’t hug the road, but rather floats around a corner, with excessive body roll, wobbling and weaving about. If the goal was to evoke classic Lincoln shitty handling, they’ve definitely succeeded. 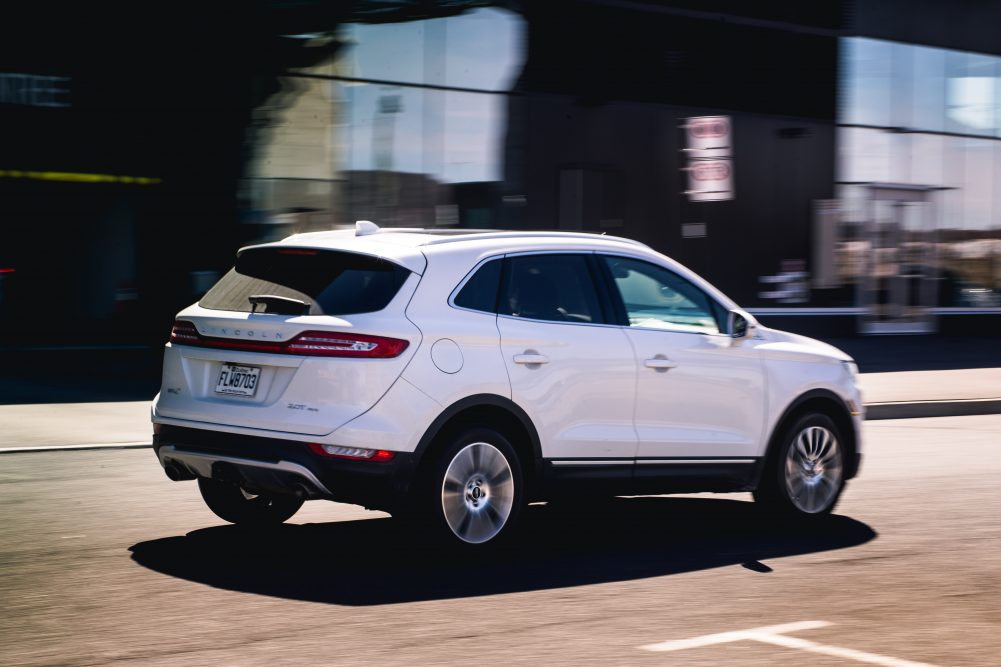 Or perhaps I wasn’t driving it the way it was meant to be driven? Ah, right. My tester was equipped with Lincoln’s Drive control, which comes with continuously controlled dampers. You can switch the car’s handling characteristics between Comfort, Normal, or Sport.  What I described up there was using the MKC’s most relaxed Comfort setting.

Still, this Lincoln prefers the laid back ride home, because even in Sport mode, it’s very soft. It should be a hit to get the kids to sleep during long rides. 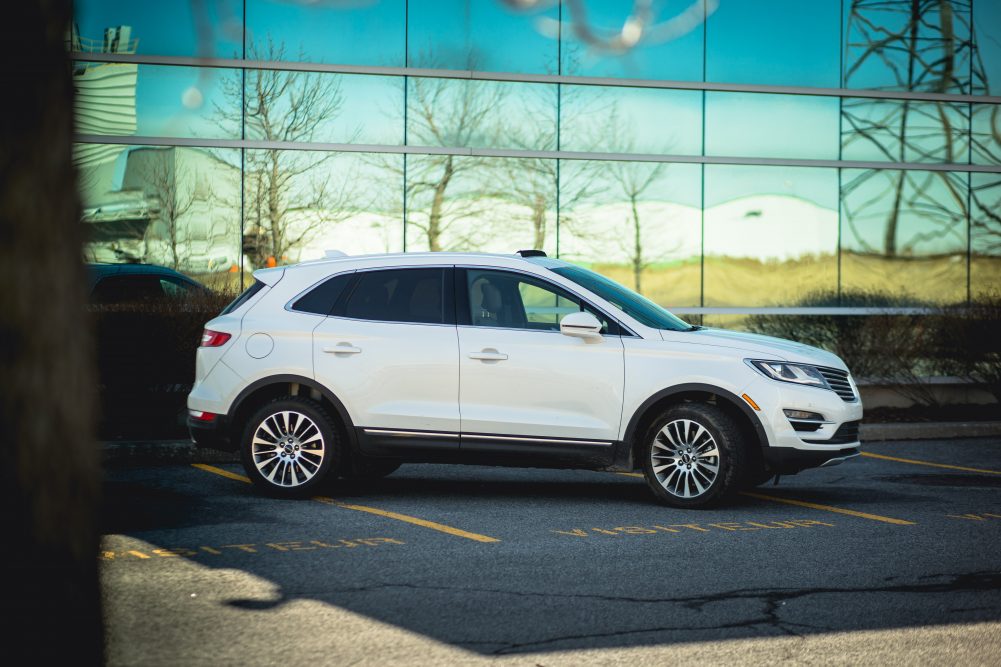 The interior of the MKC was really what impressed me the most. My tester was equipped with light brown leather surfaces that Lincoln calls Cappuccino. Door inserts, dashboard components, and center console elements were covered in a walnut trim, further accentuating this luxury vehicle’s premium status. Except for a bit of plastic on the center console and some familiar HVAC controls and general styling from the MKZ, the MKC at least feels nothing like a Ford. The luxury and craftsmanship is definitely on par with a Lexus or a BMW. 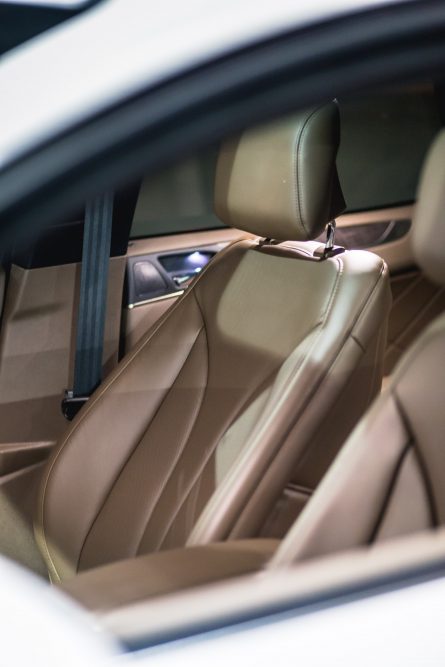 I’m also a big fan of how the whole cabin is illuminated at night. It’s elegant, classy, and distinctively American. 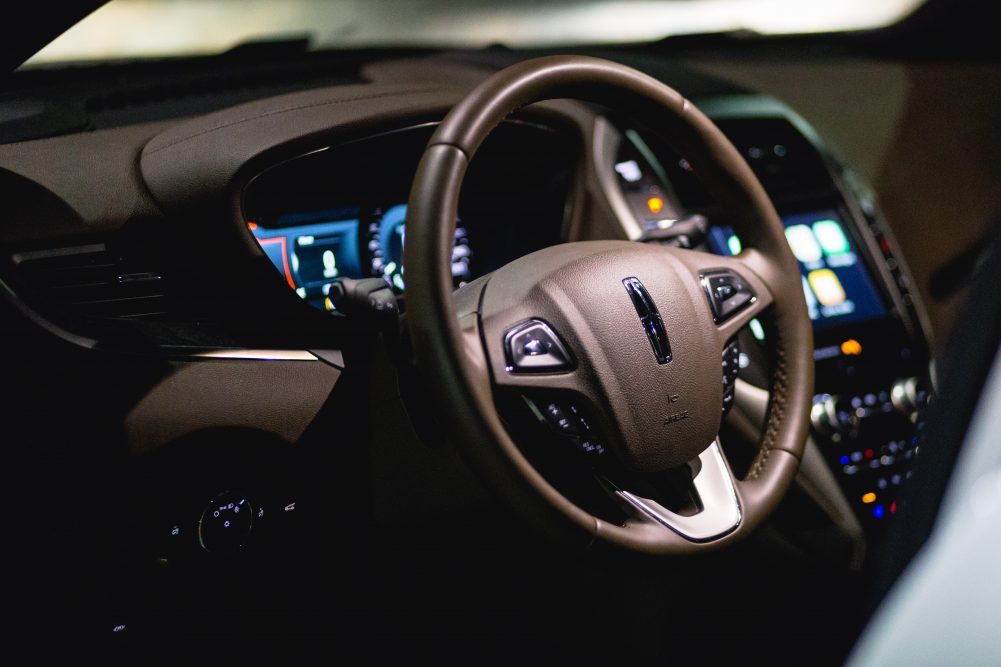 As is traditional with American interiors, the MKC boasts sumptuously comfortable seats. Lincoln calls them “Bridge of Weir Deepsoft Leather-Trimmed Seats”. Sure, whatever. They’re among the best I’ve sampled, but are still not on par with a Volvo’s. Power from the 2.0-liter turbo is ample, but not mind-blowing. However, the transmission is geared to exploit the engine’s high torque output, which definitely helps. Again, you really get a sense that Lincoln engineers we not aiming at making the MKC lap the Nürburgring as quickly as possible, but rather get your family and gear around swiftly and safely in total serenity.

The six-speed transmission occasionally fumbles from one gear to the next when pushed hard. I’m personally not a fan of the buttons located on the center stack to change gears. What the hell is wrong with a conventional gear lever Lincoln? 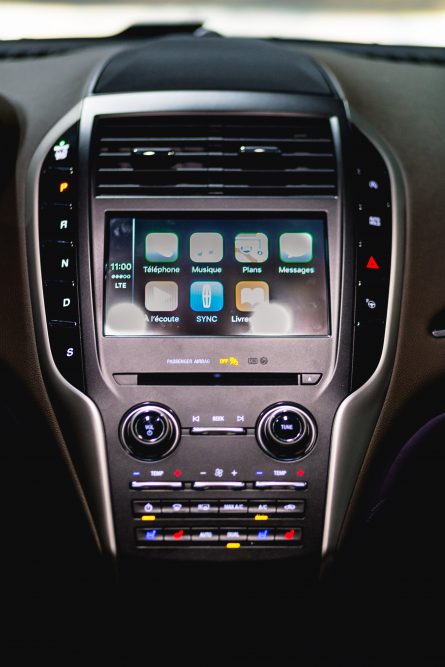 The same applies for the rest of the MKC’s ergonomics. In an attempt to place most of the vehicle’s controls around the infotainment system, the ones located at the right, such as the heated steering wheel controls, are ironically too far for the driver’s reach. And since they’re tilted towards the passenger side, they’re also hard to actually spot. 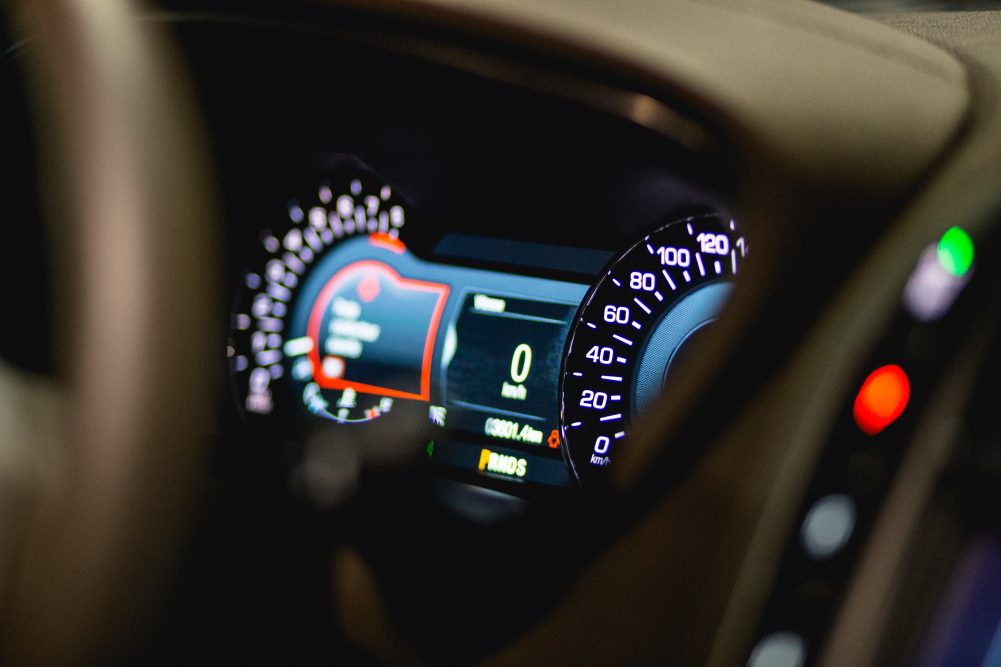 Finally, the Sync 3 touch-operated infotainment system is quick to react and easy to understand, with simple graphics and large icons. Some menus do need a bit of getting used to, but thanks to basic HVAC and volume controls that are still operated by physical knobs, you can quickly get in and operate the MKC without having to open up a book to learn how. 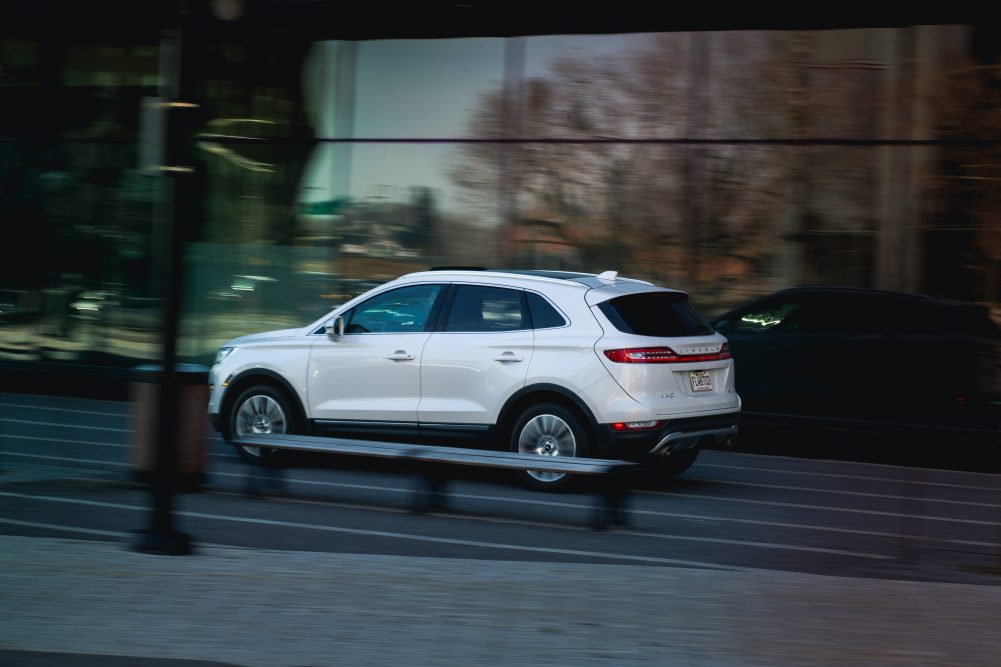 What young new buyers will mostly be looking for when shopping for the MKC is practicality. Thanks to a rear hatch that opens up the entire rear of the vehicle, very much like the Audi Q5, large objects can be easily thrown into the rear. Unfortunately, the compact Lincoln somewhat falls behind its rivals in total cargo space. When all rear seats are folded flat, it boasts 1,503 liters of total cargo capacity. That’s 119 liters less than the Audi. The MKC is also nowhere near the Acura RDX at a whopping 1,699 liters. 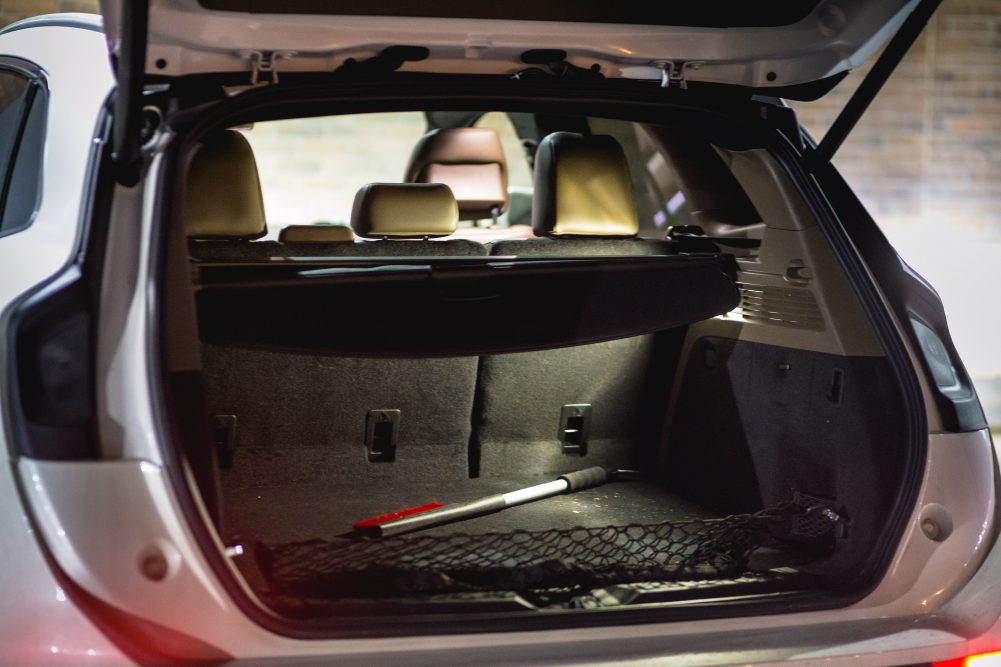 Rear legroom is also a downer in the Lincoln. Like its European rival, the rear seat, while remaining very comfortable, is rather cramped for full-sized adults.

Pricing for a 2017 Lincoln MKC starts off at $43,800 for an entry-level 2.0-liter turbo. My tester was the highest trim level powered by the small engine, which Lincoln calls Reserve 300A. It comes loaded with those fancy leather seats, heated and cooled front seats, and heated rear seats, a panoramic sunroof, navigation, a premium audio system, the adaptable dampers, and a full array of semi-autonomous safety tech such as the SOS post crash alert system, or what is most commonly known as a collision mitigation system in other cars. 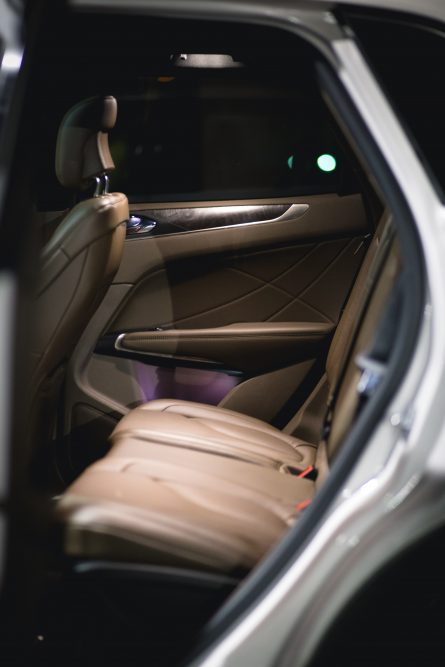 If you’re looking for the ultimate MKC experience, go for the Reserve 300A, which is powered by the more potent 2.3-liter turbo four and comes with flashy wheels and even more luxury toys. It sells for $50,950. Frankly, that’s getting quite expensive for a Lincoln. That’s expensive for any compact crossover if you ask me. I’d personally stick with the 2.0-liter models. Not that this is a bad vehicle, but its brand cachet is simply still not up there with the Europeans.

So, what makes a Lincoln, a Lincoln? Peace of mind, serenity, comfort, styling, value? Yeah great. I guess. The MKC offers that. But why should I consider this over an Audi Q5, or anything Japanese? Here’s my verdict: there’s no doubt the MKC is a quality vehicle. It’s a worthy competitor that deserves your attention. It’s different enough, looks and feels American, attractive, and offers all the endearing traits buyers will look for in this type of vehicle, practicality, safety, and lots of tech.

But it doesn’t feel special enough. It just feels like Lincoln threw all the tech and creature comforts at it to justify the high sales price. A Honda CR-V feels more of an engineering feat than this. 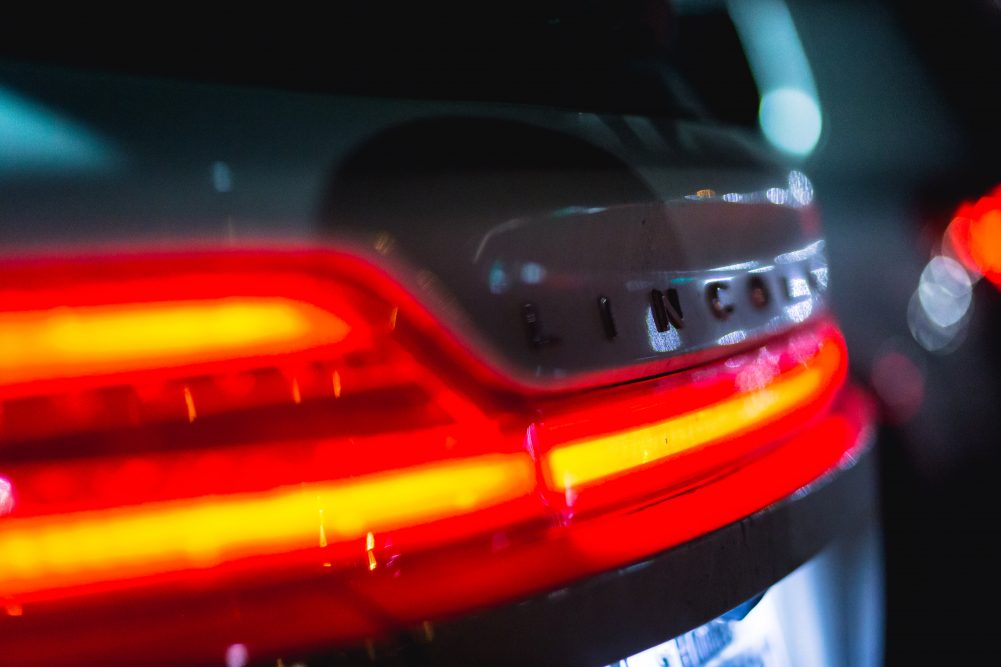 As a millennial myself, the target clientele for this vehicle, I simply don’t care for the Lincoln MKC. Granted, it’s a vehicle that’s getting a little old in Lincoln’s lineup, and will soon be subjected to a redo. If Lincoln can inject some of the DNA they’ve fostered in the new Continental and Navigator in their little crossover, then maybe they’ll get my attention. Until then, I’ll watch my next door baby-boomer neighbor go out and buy one, while I shop for an Acura, an Audi, or a Lexus.