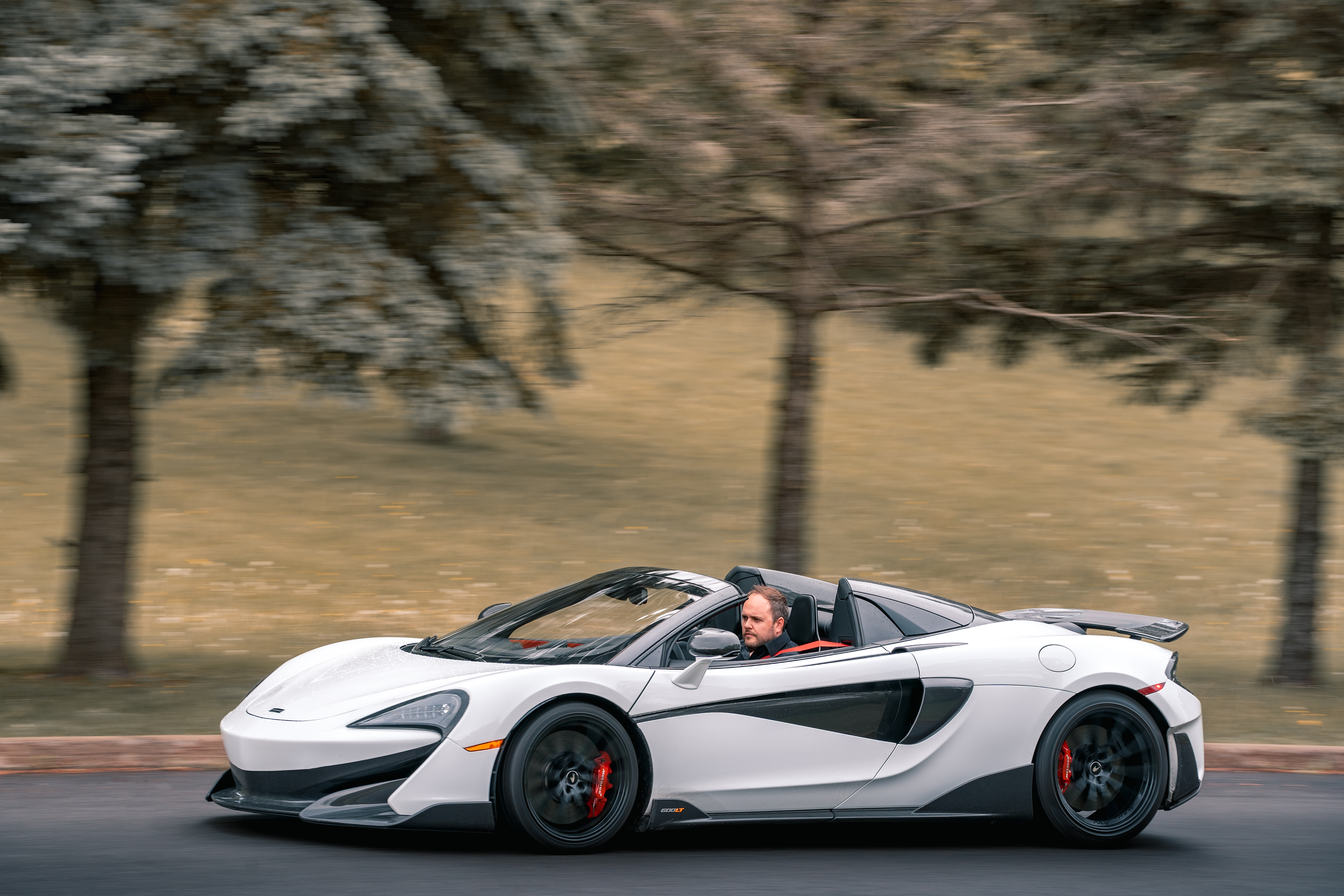 Because Clavey’s Corner is still young, I haven’t yet had the opportunity of reviewing a supercar. That all changed when McLaren Canada offered me the opportunity to get behind the wheel of its latest “entry level” performance machine, the 2020 Mclaren 600LT Spider.

For the record, even big media have difficulty getting these cars. What you need to understand is that a carmaker like McLaren, Lamborghini, or Ferrari doesn’t typically leave press units lying around for journalists. These are exclusive automobiles, often garage queens that need to be catered, with their odometers kept low so they can retain the maximum amount of resale value. This is why I only had this car for three days, and a strict 400-km limit to drive it. Don’t worry though, I made sure to get the most out of it. 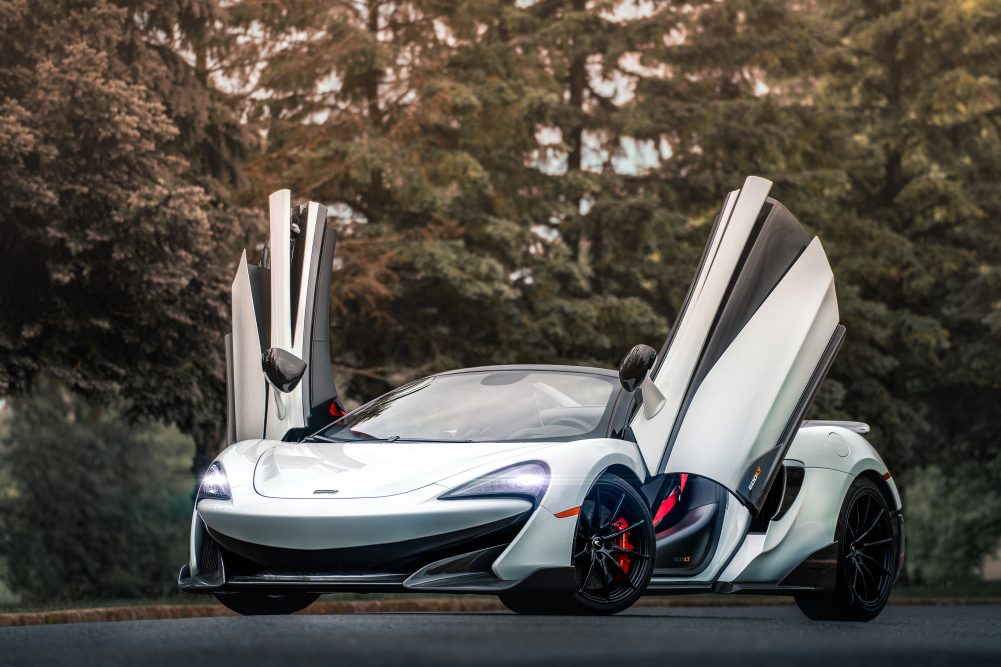 If you’re confused by McLaren’s model lineup lately, don’t worry, you’re not alone. Allow me to give you a little crash course on what’s what.

The 2020 McLaren 600 LT Spider sits in a category McLaren calls the Sport Series, which is a polite term for “entry level”. The Super Series cars are the badshit crazy ones like the 720S or the Senna. Now, because these things kick off  at just over $250,000, they’re hardly affordable per say, but McLaren does brag about the fact that it can sell you a supercar at a much lower price point than Ferrari and Lamborghini, which isn’t exactly false when you opt for the “bargain-basement” 570S. 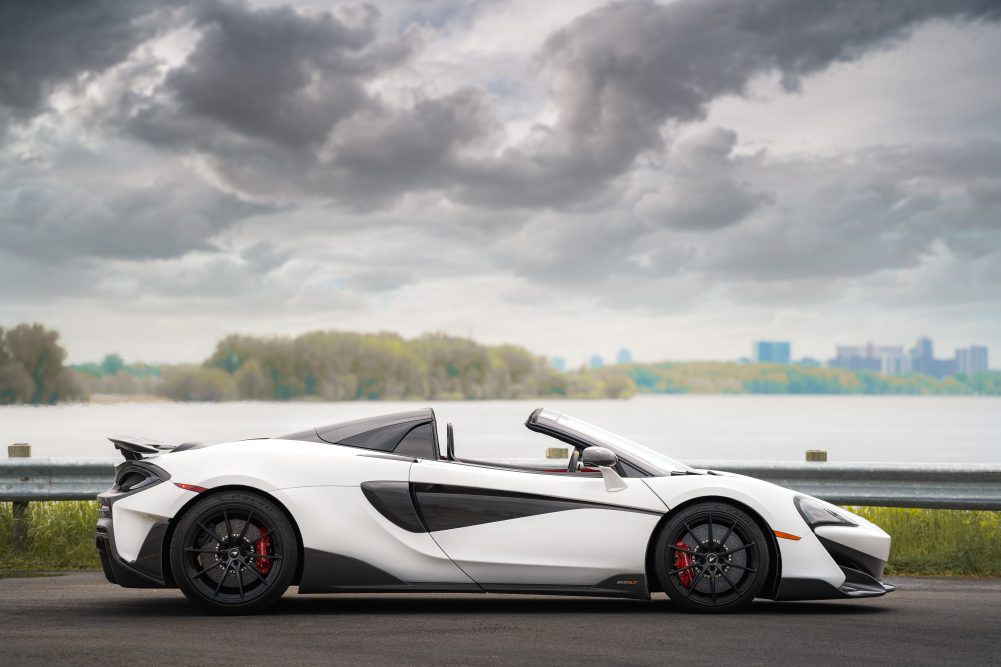 However, the 600LT is everything but cheap, especially in Spider form, easily knocking at the door of the $350,000 mark when fitted with options. It’s essentially a heavily modified and track-focused version of McLaren’s baby 570S. See it as a rival to a Lamborghini Huracan Evo or a Ferrari 488 Pista. Hell, you could even throw in the Porsche 911 GT3 RS for shits and giggles. What you need to remember is that this is a much lighter, more agile machine than the car it’s based on. 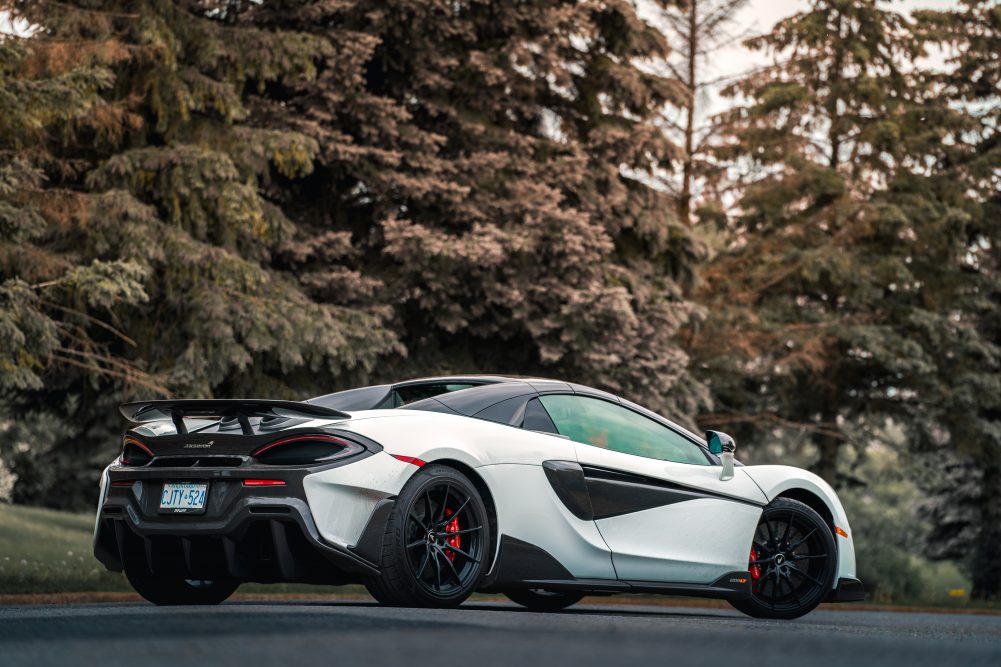 The “LT” designation stands for Longtail, which harkens back to the very first McLaren F1 GTR Longtail that won the 24 Hours of Le Mans back in 1995. McLaren now incorporates this philosophy to its road cars, the idea being to stretch a vehicle’s body for increased downforce, improved aerodynamics and better overall handling.

Hence, for the 600LT, McLaren pulled the 570S’ body some 74 mm, and reduced total weight by 96 kg through a more intensive use of carbon fiber and aluminum. As a matter of fact, the 600LT is so different than the 570S, that McLaren claims 23% of its machinery is all-new. 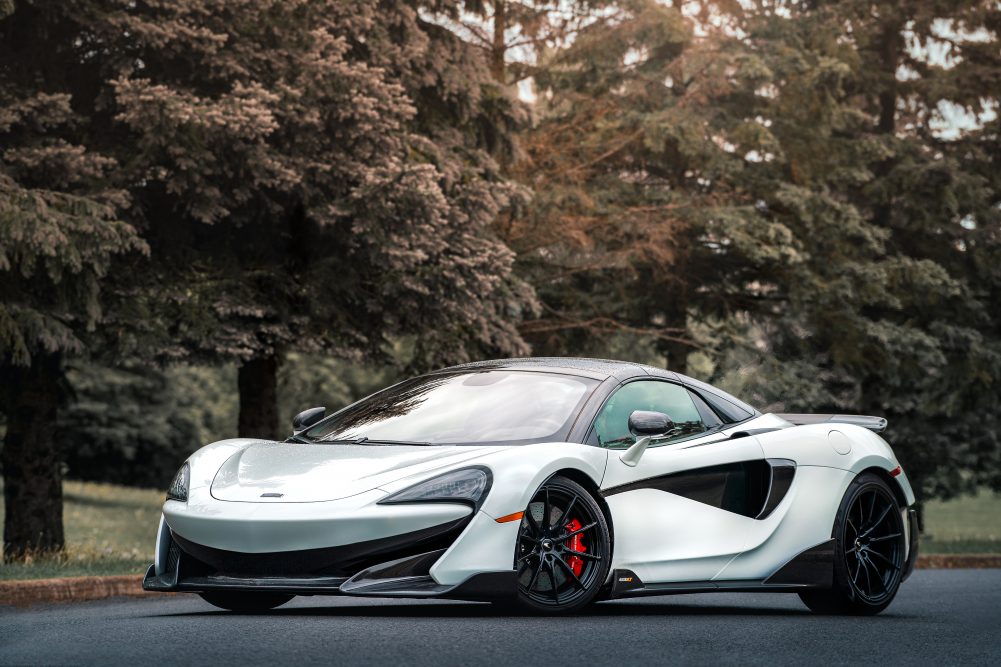 For instance, wheels, brakes and suspension components were re-engineered to shed off 30 kg in total. Brakes are taken directly from the more powerful 720S. The car was slightly lowered, while sitting wider than its little sister. Power from the twin-turbocharged 3.8-liter V8 sees a 30-horsepower bump through a new camshaft and ECU programming. Total output is rated at 592 horsepower and 457 lb-ft of torque. 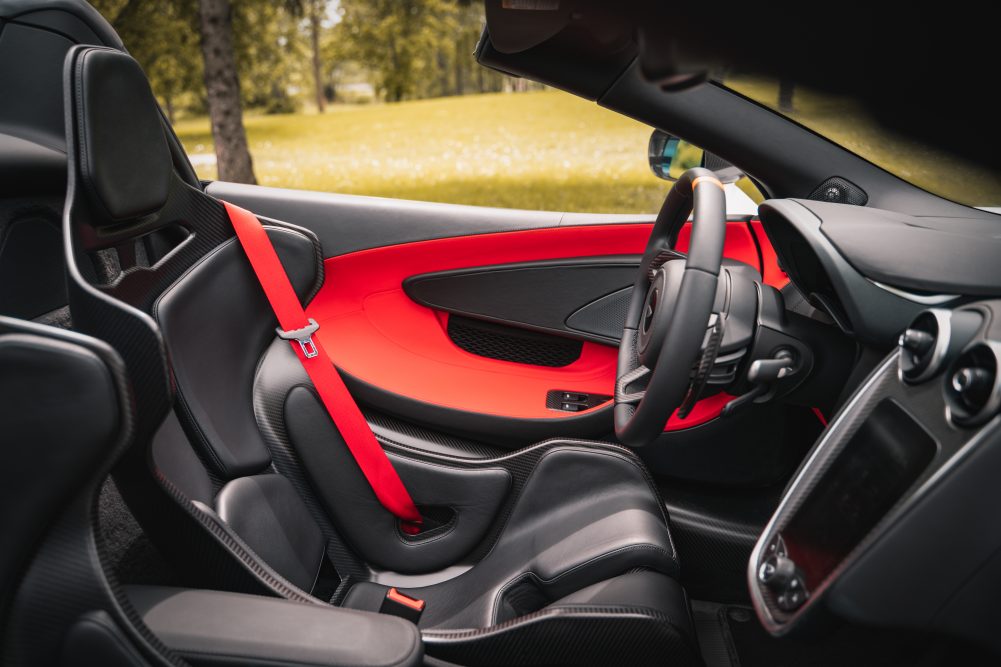 Obviously, rear-wheel drive is the only way to go for this mid-engine exotic, with a twin-clutch SSG seven-speed gearbox taking care of putting the power down. McLaren claims that even with the removable roof, acceleration from 0 to 100 km/h is rated at three seconds flat.

Taking It All In 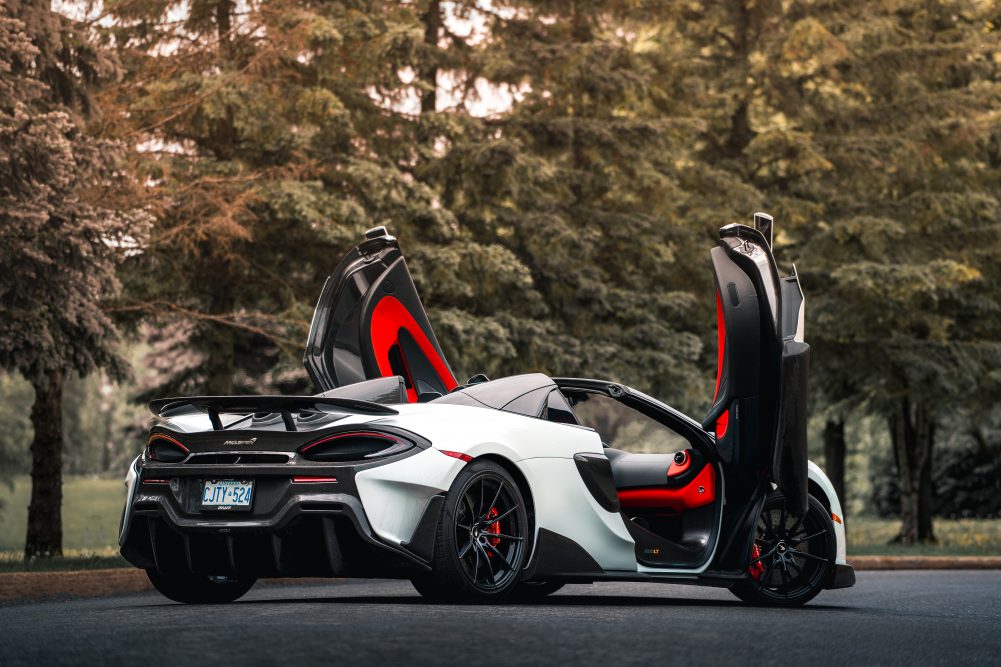 Getting inside the 2020 McLaren 600LT requires a slight contortionist act as you slip inside its carbon fiber racing seats, part of an additional package my tester was equipped with. Those seats sure look the part, and they’re surprisingly comfortable once inside, even though their cushions appears to have been glued onto their frames as an afterthought. My tall stature had no issue finding comfort in this thing. Getting out of the car, though, proved a little more complex.

I had heard stories about how easy a McLaren is to live with compared to its Italian competition, and although I still haven’t driven a Lamborghini or a Ferrari, I sat in those cars many times, and I can confirm that the 600LT’s cockpit is the easiest one to slip inside. Visibility is also its best asset thanks to an ultra-low windshield that allows you to see everything ahead of you, feeling as though you’re sitting on top of the car. Thin A-pillars help accentuate this feeling. In many ways, this feels like the first-generation Acura NSX. 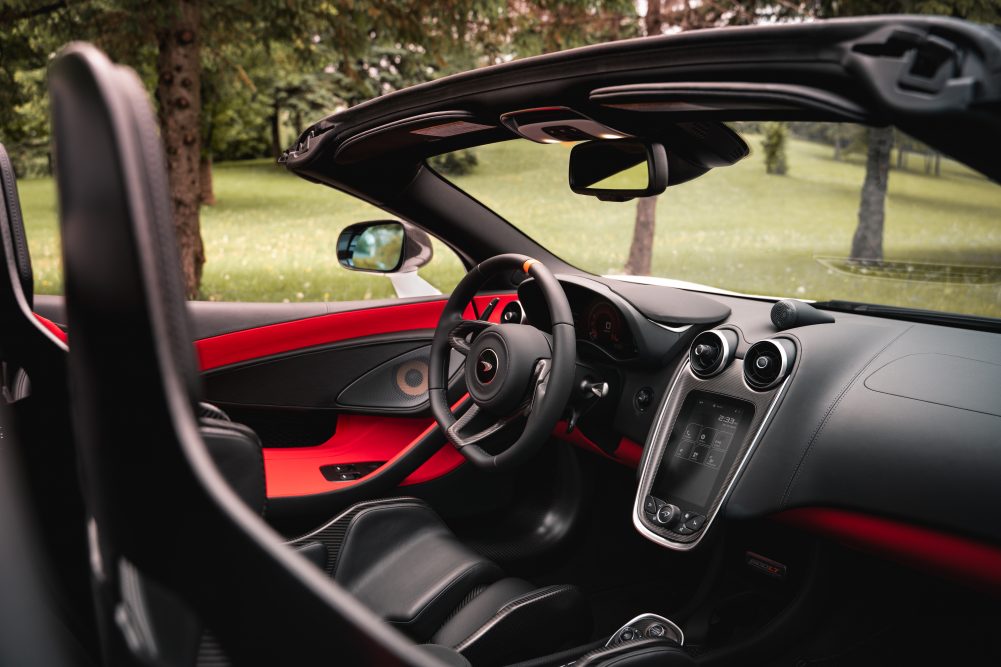 That was also the first impression I had when pulling away onto the highway for the first time with this near-600-horsepower supercar. the 2019 McLaren 600LT Spider is easy to drive, impressively compliant and absolutely not intimidating. Set the suspension, steering, engine and transmission to Normal mode, and the V8 provides ample low end thrust, chirping its turbos as they spool up behind you, gearbox making sure cogs are kept at their highest for optimal fuel economy. That engine does have a course sound when purring around town, I must say. It’s not what I would call refined, or as melodious as what the Italians will sell you. 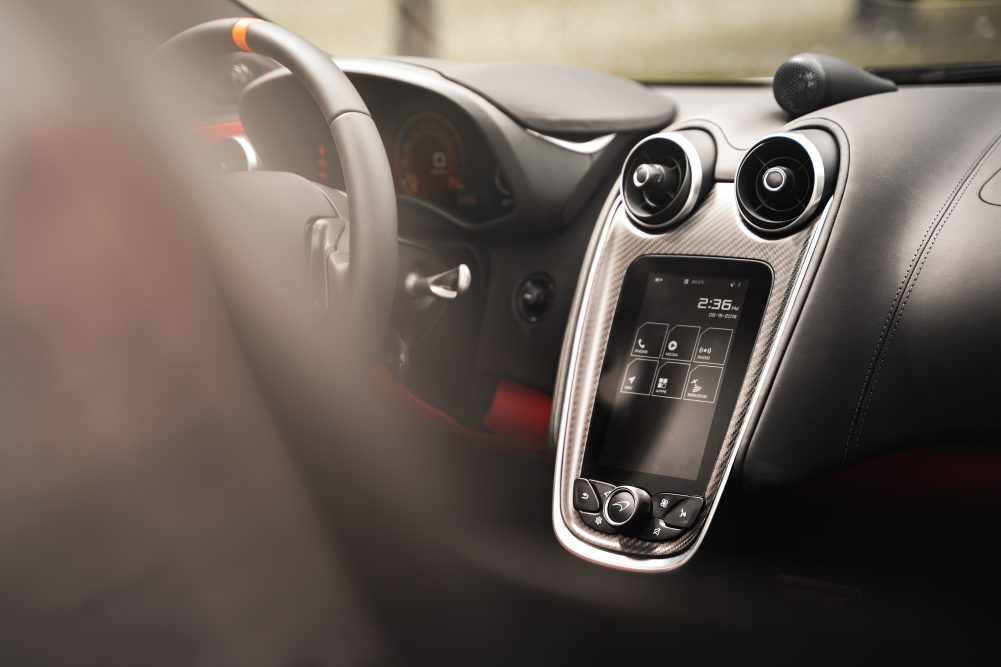 I’m also going to say that I absolutely hate the complexity of all controls in this car. The infotainment system, while quite simple in execution, is plagued with unnecessarily complicated controls that require several steps to complete simple tasks. It’s the same story for lifting the car’s nose, where one must shuffle through menus in the instrument cluster and respect a series of procedures – engine on, seat-belt buckled, steering wheel straight -, to get the front suspension high enough to enter that god-forsaken driveway. Meanwhile, the car has three buttons to open the frunk. Three! 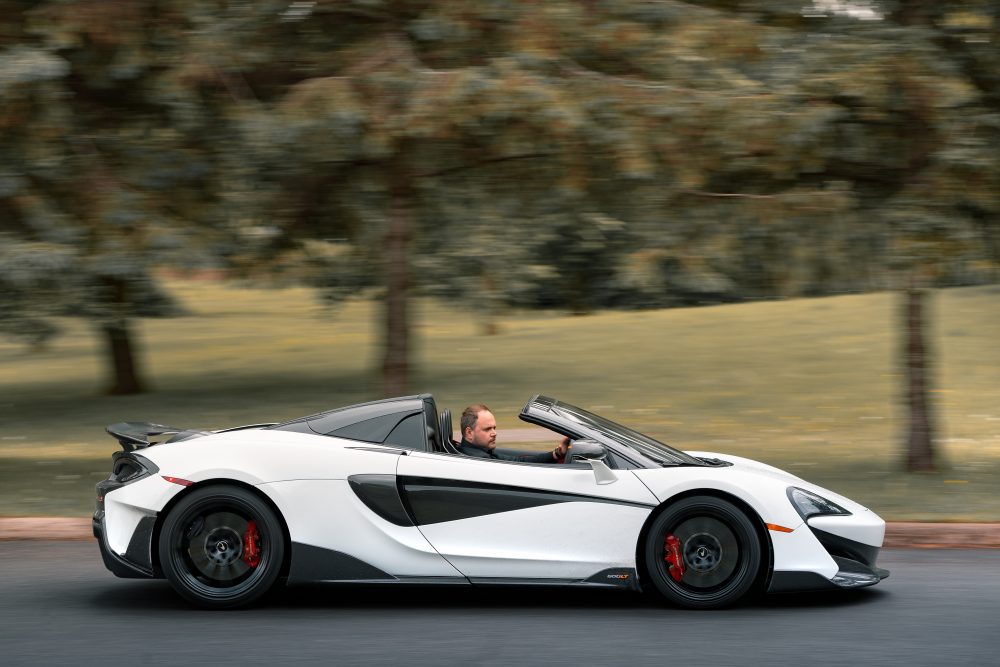 But none of this matters the moment you set your 2019 McLaren 600LT in Sport, or better still, Track mode. Simply caress that piece of carbon fiber McLaren calls a paddle shifter sitting left of the steering wheel and that dual exhaust, sitting right behind your head in a vertical jet-like position, emits a backfire – Pow! – so loud, your ears instantly go numb. If you’re lucky, you can even spot a tiny flame from the rearview mirror as this happens. 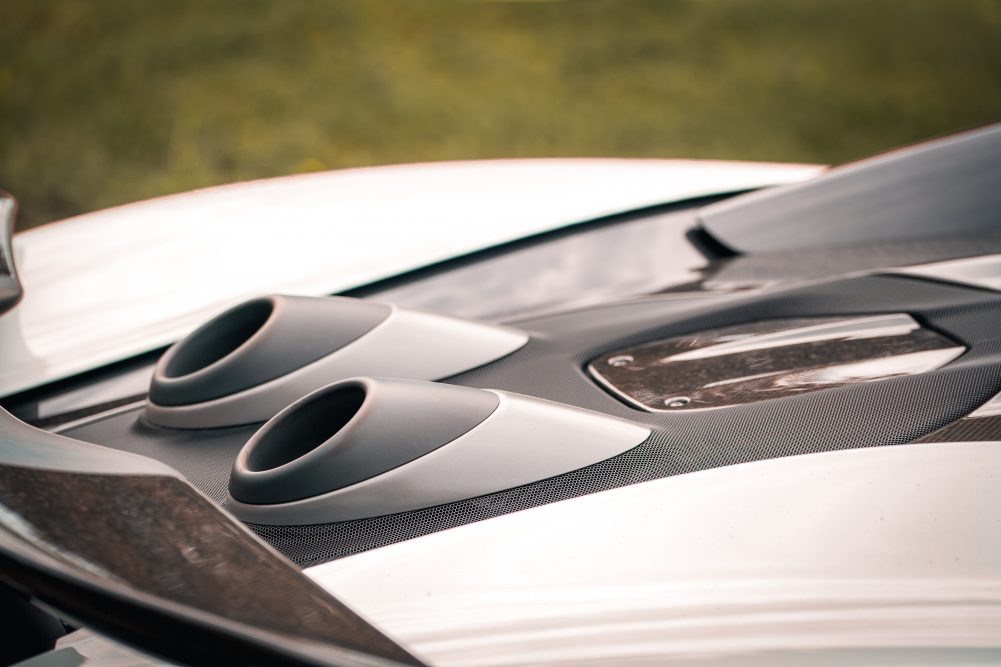 Stomp the accelerator pedal, and this McLaren doesn’t accelerate, it warps, rushing you inside your seat as your hair becomes one with the wind venturi created by the removable roof. At this point, the V8 engine sputters even odder decibels, sounding half muscle car, half speed bike as it rushes to redline in an eager fashion. There’s turbo lag. A lot of turbo lag, but once boost is on, the rush of power is god-like, pushing you up the back like a wave sent by Poseidon himself. 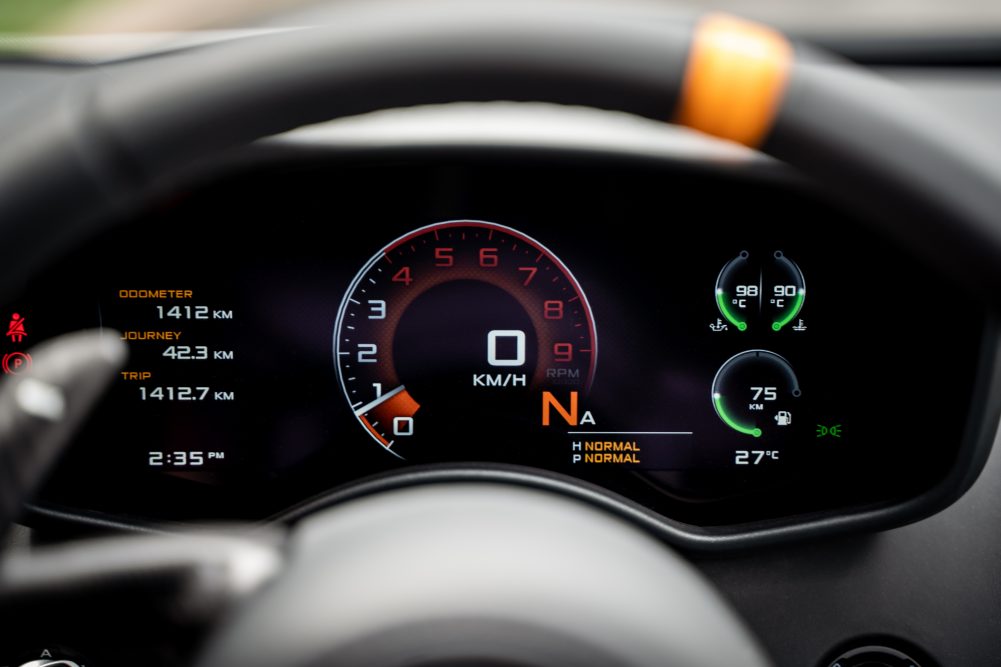 Come to the next apex, slam the brakes, and your face splatters across the windshield as the car’s rear wiggles about, reminding you it’s not messing around. You wait a microsecond until everything is stable again, letting the 100 kg of downforce generated by that massive rear wing do its thing. 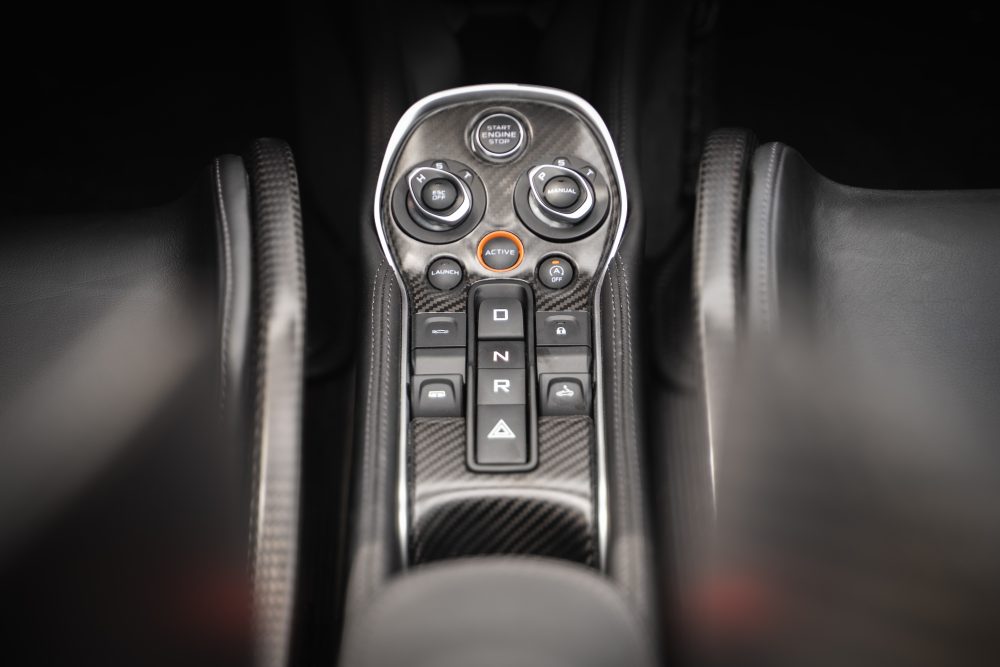 Back on the throttle, and the 600LT catapults you out of the corner in a surge of racecar fury. Steering feel is this car’s defining feature, one of the most direct and feedback-prone electric systems I’ve ever sampled, feeling as lively as a non-power-steering go-kart; scalpel-precise reaction times, and a super-rigid chassis that only demands to follow along. What the 600LT loses in flamboyance versus the Italians, it makes up for with technical precision. 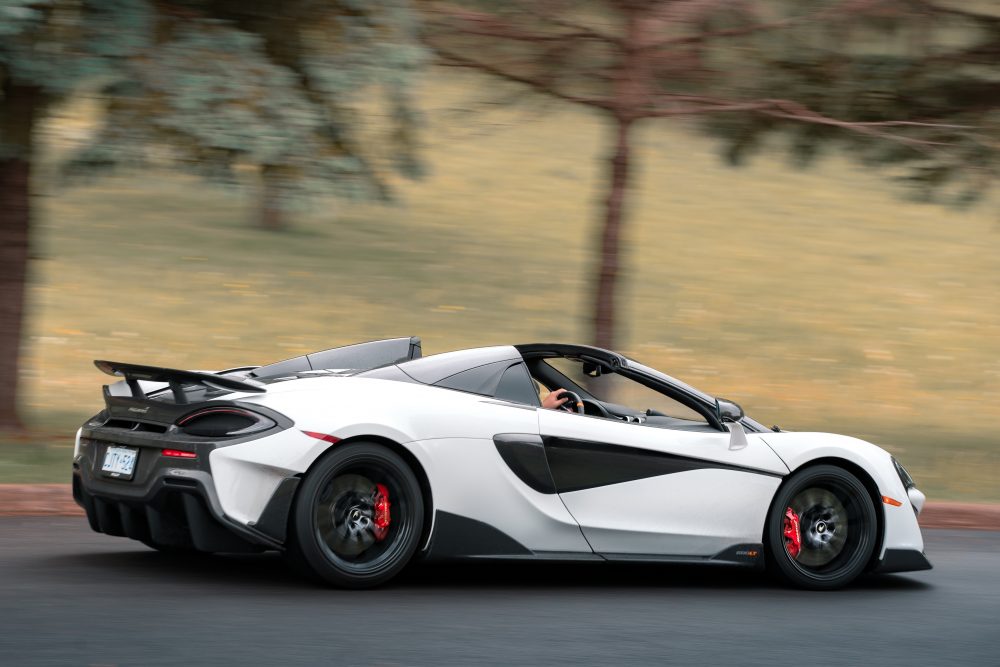 Once it’s done flexing its muscles, the 600LT gets back to being a docile, easy to live with little puppy, one that attracts all eyeballs and smart phones as it flaunts its magnificent curves, edges and graceful design while cruising along on a warm summer’s day.

Absolutely gorgeous, savagely quick, supremely well put together and just rough enough around the edges to give it character, the 2020 McLaren 600LT Spider is the one that splits the difference, it’s the British kick in the nuts, the supercar Ferrari and Lamborghini feared.

Review of the 2020 McLaren 600LT Spider by William Clavey
Supercars