2017 Nissan Pathfinder: The Inevitable Evolution of an Ageing Nameplate 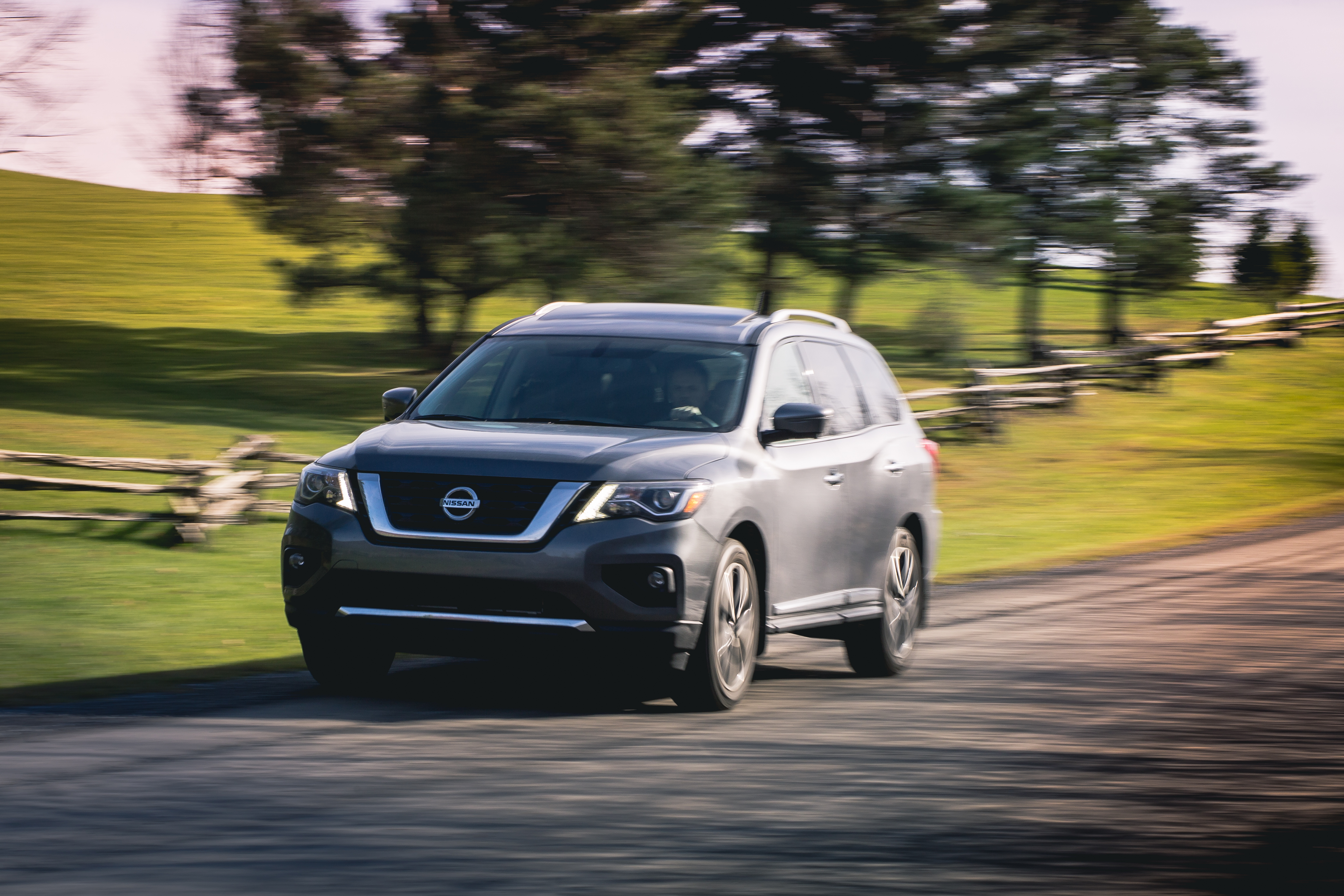 As with humans, cars are unfortunate victims to the sands of time. Some cars, like the Chevrolet Corvette and Porsche 911, have managed to survive by remaining true to their original form; a process that is usually referred to as evolutionary.

Other cars, however, require a complete design overhaul if they are to remain relevant in this rapidly changing world. We call this process revolutionary, where the car typically undergoes a complete change of ethos to adapt. The sport utility vehicle is a prime example of this process. Once perceived as a rudimentary, rugged, and environmentally unfriendly method of transportation, the basic conception of these vehicles has been drastically altered over time so they can fit better with the realities of the modern world.

Launched in 1986 as a two-door off-road machine that was essentially a boxed-in Hardbody pickup, Nissan’s famous SUV has evolved incrementally over the years to become the 7-passenger, Altima-based, soccer practice shuttle it is today. And with most truck fans out in the streets raising their clenched fists in the air to protest against Nissan’s decision to transform what was once a genuine adventure vehicle into the automotive equivalent of mom jeans, Nissan would like to announce that for 2017, it’s added more ruggedness to one of its oldest nameplates in hopes of making the Pathfinder look and feel like a real truck again. The question is: will this meet the demands of the Pathfinder’s new target clientele? 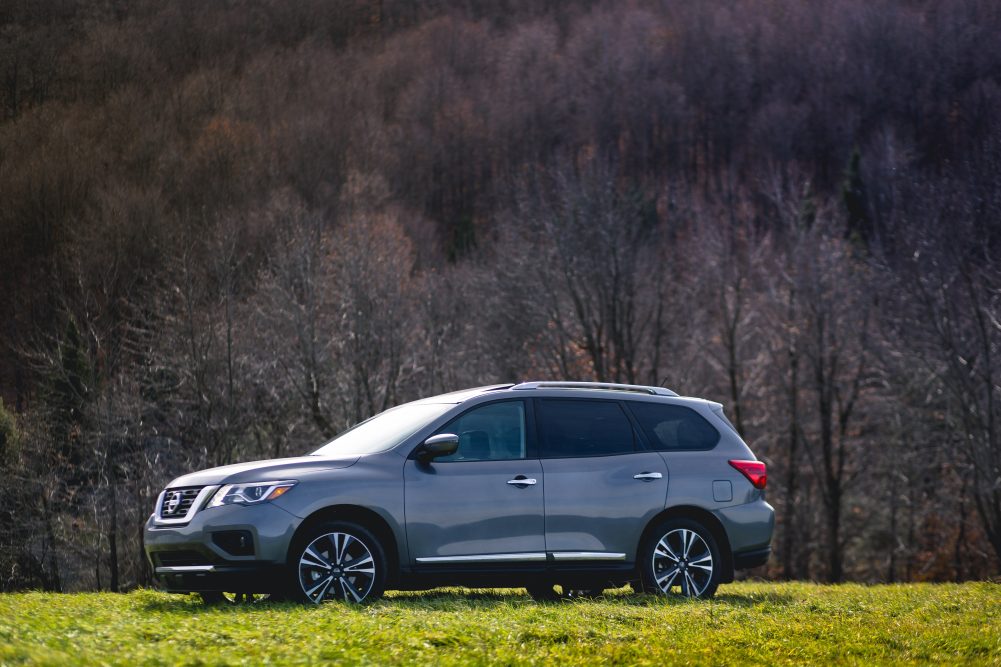 I have to admit, I was a huge fan of the 90’s Pathfinder. Very much like the Maxima, it was one of those vehicles I just couldn’t help but have massive respect for, simply because it was an honest to goodness, no nonsense, very capable and properly proportioned truck. It’s also a vehicle I remember riding in when growing up, as my uncle used to own one. Only thing is, back then, like the Pathfinder he drove, my uncle was athletic, good-looking, and sorta bad-ass.

Unfortunately, like my uncle’s inevitable demise, the Pathfinder’s appearance now leans more towards that of a soft middle-aged man with a weight problem. But don’t blame the Pathfinder for this, blame the industry. This is what people are buying, and Nissan is simply supplying demand. Besides, good luck finding a 7-passenger SUV built on a body-on-frame construction nowadays.

This is why, when you look at it for what it is; a lifted minivan, or should I say a family hauler, the 2017 Nissan Pathfinder suddenly doesn’t seem all that bad. And for 2017, Nissan has given its 7-passenger four-by-four subtle, yet significant exterior updates that, according to Nissan, should give the Pathfinder a more masculine appeal. It may not seem evident at first glance, but there’s now a new restyled hood, grille, headlights, and front bumper. The rear also benefits from new tail lights – gone are the feminine chrome contoured lenses from the last model, and the rear bumper is now more angular with fewer creases and curves to give the illusion of an overall wider stance. It’s subtle, but does work at putting the Pathfinder more in tune with Nissan’s beautiful new design language. In all honesty though, this remains a rather dull looking appliance on wheels. 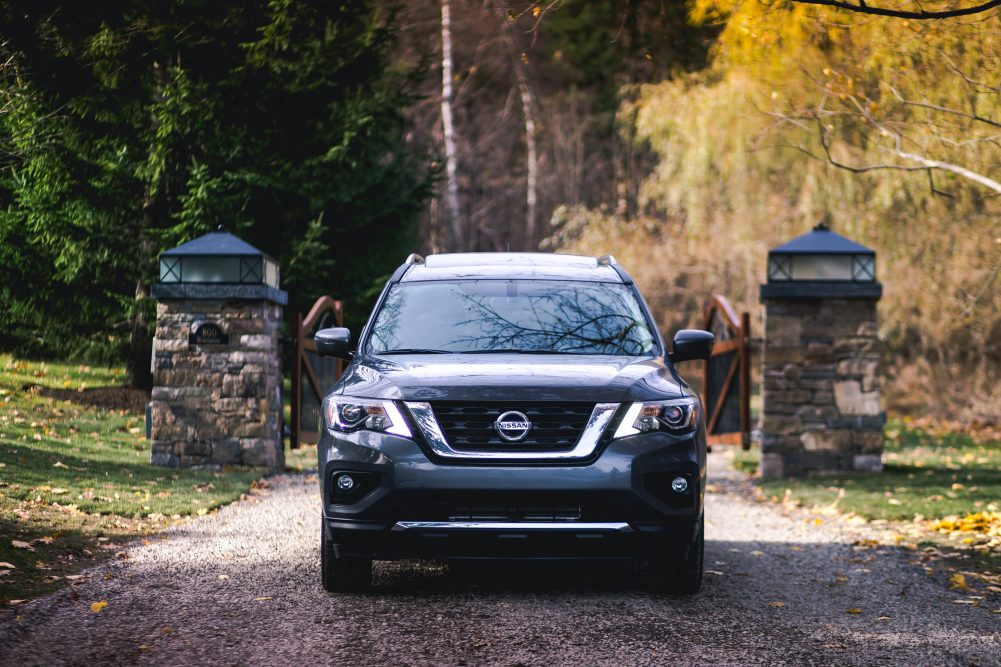 That being said, do these tweaks make this SUV instantly identifiable as a rock-climber? Not really. Although the Pathfinder’s press kit repeated the word “adventure” more often than a promotional flyer for a provincial park, the vehicle is still essentially a mall finder with locking differentials. It’s important to note, however, that Nissan has fitted this Pathfinder with an array of configurable traction settings. It’s the only 7-passenger AWD vehicle to offer the option to switch back to two-wheel drive for improved fuel economy. All-wheel-drive can either be set to Lock or Auto, where Nissan’s clever All Mode 4×4 system adapts automatically according to varying road conditions. There’s also a hill descent system.

I did have the opportunity to take this behemoth into uncharted territory, and although I didn’t go full mudder with my tester, I can assure you it still knows how to crawl.

More Power, but That CVT 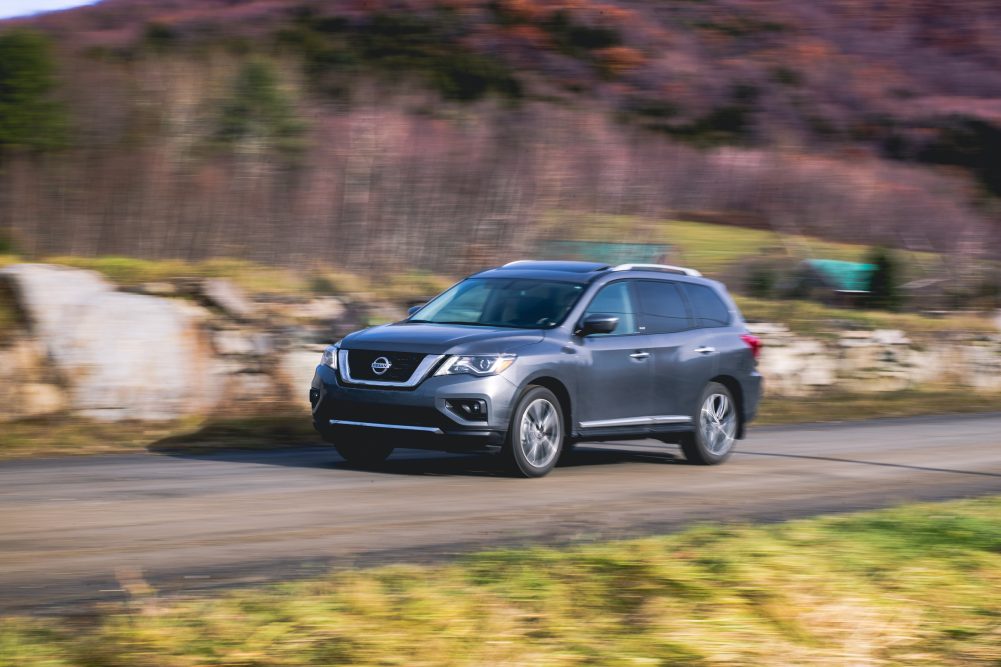 One area where the Pathfinder does get more substantial brawn is under the hood. More power is always a good thing and for its facelift, the Pathfinder doesn’t disappoint. Still propelled by Nissan’s tried and tested 3.5 L V6, the 2017 Pathfinder now benefits from direct injection as well as an array of minute mechanical enhancements that work to drastically improve the engine’s power delivery, efficiency, and overall solidity. Power is now rated at 284 hp (+ 24 hp) and 259 lb-ft (+19 lb-ft) of torque. Nissan claims that over 50% of the V6’s internal components have been revised. This includes a redesigned combustion chamber, pistons, a higher compression ratio, and variable intake-valve timing. 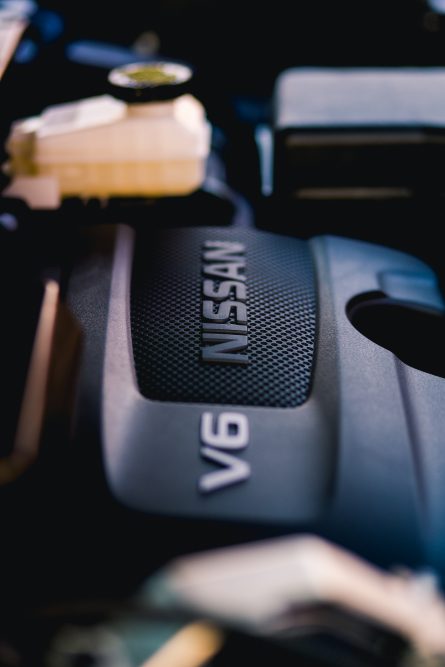 Towing capacity is also dramatically increased to 2 721 kg (+ 453 kg), apparently the highest in its class.

How does it all feel behind the wheel? The way a 2100 kg barge should feel. There’s nothing joyful here. First impressions while driving the Pathfinder was its weight, which sort of acted as a double-edged sword. The upside is a sense of a rock-solid construction; a vehicle whose cabin exhibits very little road or wind noise and a chassis that has the capacity to absorb rough road surfaces superbly well. During the same time I was reviewing the 2017 Nissan Pathfinder, I was also reviewing the 2017 Volvo XC90 T8 – arguably the best SUV on the planet right now. Granted, these two vehicles are in two separate segments and price ranges, but it’s important to underline how solid the Nissan felt after getting out of the Volvo. 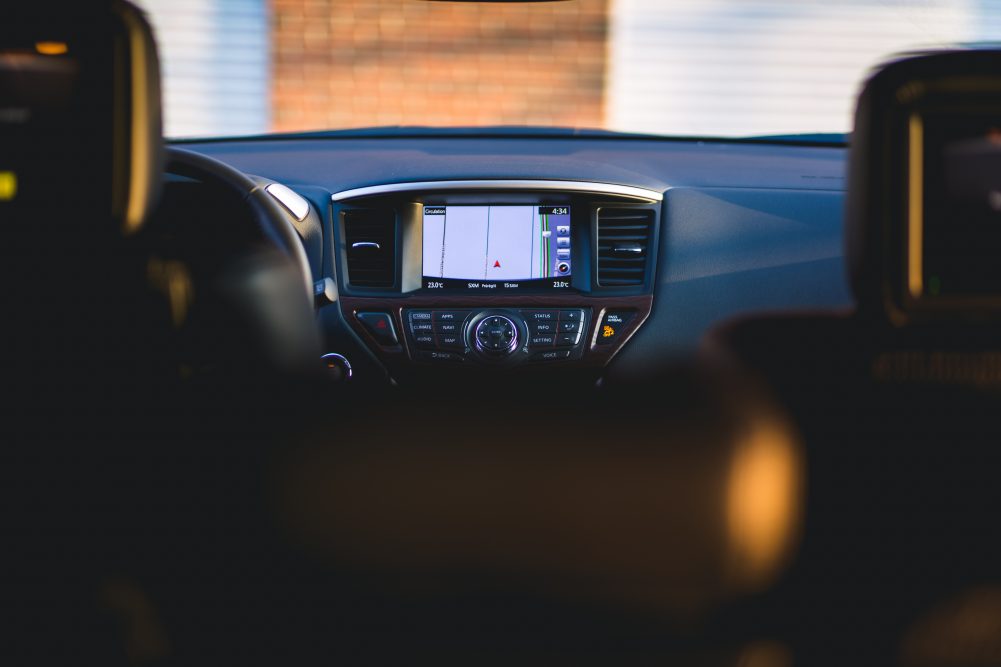 However, the Pathfinder’s heft did work against it in its overall manoeuvrability. Whatever you do, don’t attempt to hit a bend too fast with it. Body roll is excessive, and reactions to driver inputs are slow. The Pathfinder doesn’t like to be pushed around, and unlike the Honda Pilot that feels light on its feet all the time, the Pathfinder’s weight is constantly felt. Add to that questionable grip on dry pavement and this SUV feels outright sloppy. 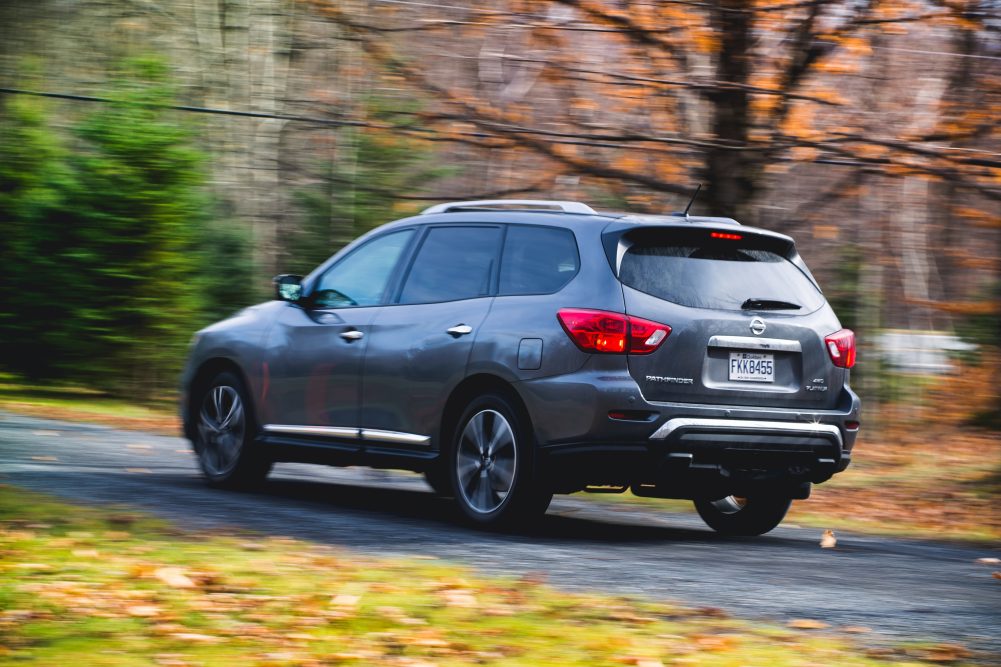 I do give credit to Nissan for continuing to fit their cars with hydraulic (and electric) assisted power steering systems. Like in the Maxima, the Pathfinder’s steering has a pleasantly weighted feel to it, further enhancing this SUV’s sense of solidity.

Power from the 3.5 L is as expected from Nissan: it pulls strong through the entire rev range, with a pleasant tendency to enjoy revs. It also delivers enough low end twist to swiftly get the Pathfinder off the line. Essentially the same engine found in the Maxima, that 3.5 L remains a gem and sounds fantastic at full throttle. And as I mentioned in my review of the Acura TLX, I continue to believe that naturally aspirated engines contribute to adding soul to any vehicle – even a 7-passenger SUV. 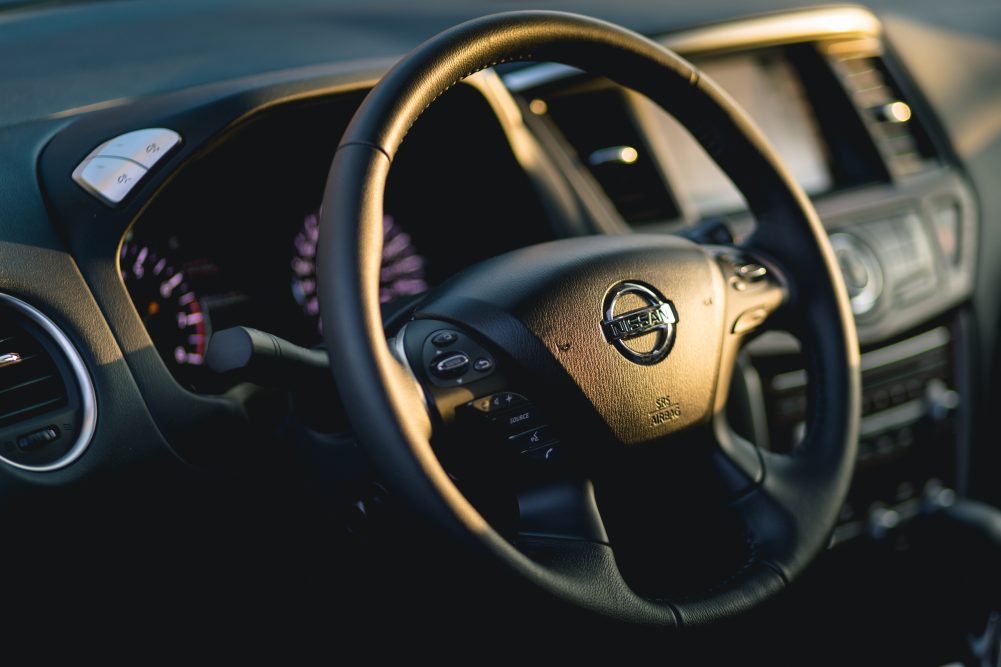 Unfortunately, just as in the Maxima, I was rather disappointed with Nissan’s Xtronic CVT transmission. Although vastly improved over past generations thanks to the ability to simulate gear changes in order to maximize the engine’s full potential, the system remains laggy, lingering under moderate throttle applications, and simply feeling like its holding the otherwise superb engine back. Every time I’d gun the throttle, it felt like the Pathfinder’s engine was pleading at me through its compartment:  “Please help me!” 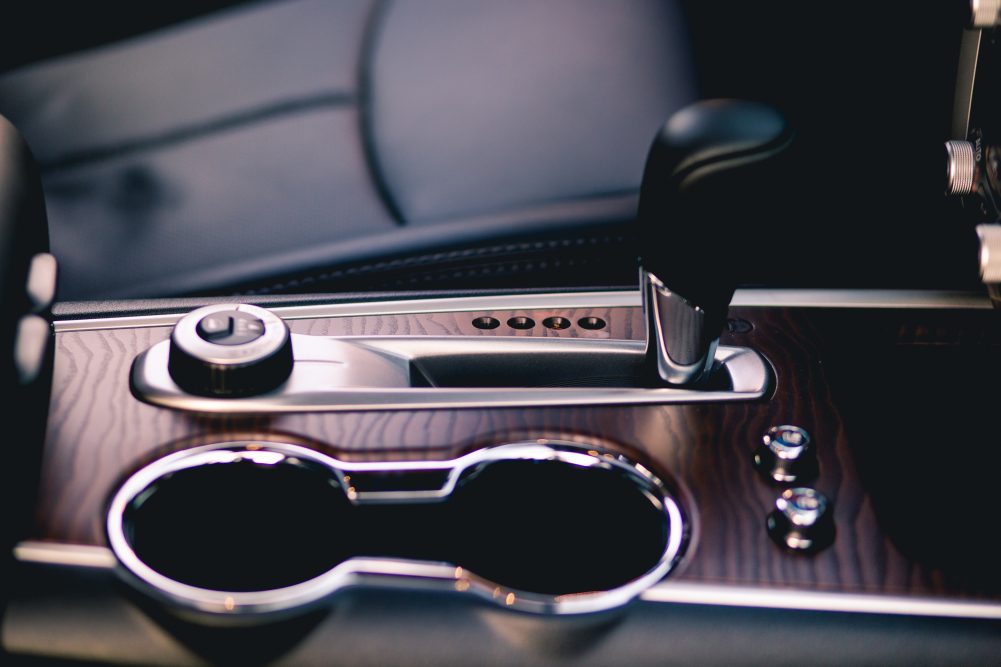 After sampling Honda’s simply astonishing CVT, it’s hard to give Nissan praise for their Xtronic system. Kudos to Nissan for vastly improving it, and it works at making the Pathfinder thrifty at the pump (9.5 L / 100 km average), but Nissan definitely needs to bring it back to the drawing board because it’s plain terrible and sucks all the life out of that fantastic engine.

Leading the Pack Where it Counts 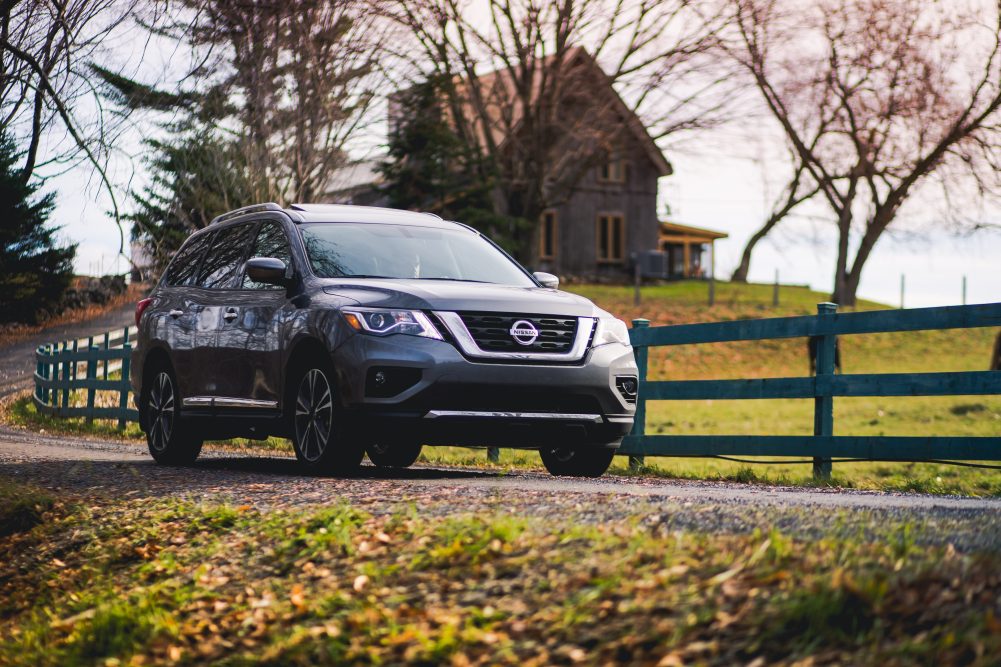 Step inside the 2017 Pathfinder and you’re greeted to a comfortable and well put together interior. My tester, the Platinum trim, was fitted with sumptuous leather seats and fake wood grain, which in all fairness looked rather tacky compared to what is offered in the Maxima. Build quality is good, with decent materials that don’t really allow the Pathfinder’s cabin to set itself apart from other players in the segment.

Overall controls are straightforward and easy to operate, but there are some ergonomic issues: some of the vehicle’s traction and safety assistance controls sit low to the left of the steering column, making them hard to see and reach while driving. I’m not sure how Nissan’s engineers thought that was a good idea. 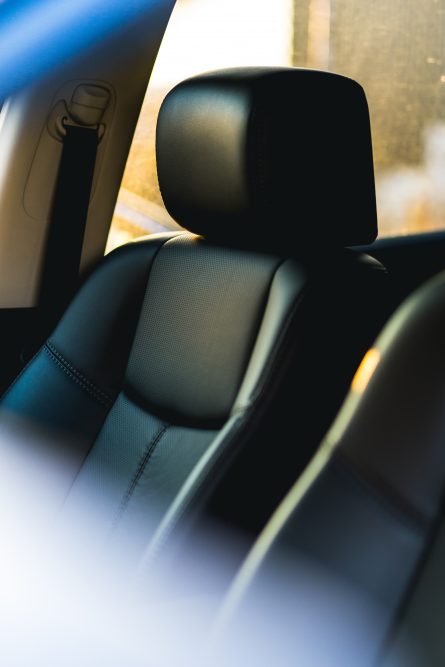 The same complaint goes to the infotainment system, which, although responsive through either its touch-operated or physical controls, is plagued with undecipherable menus and not-so-easily accessible information. Granted, any infotainment system has a learning curve, but the Pathfinder’s system does require some time to get used to. 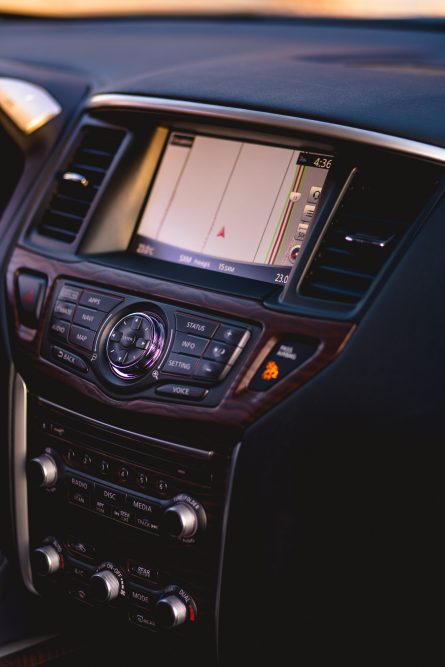 Areas where the Pathfinder impressed were in areas that will matter for the families that will spend most of their time in it. There’s a new “leg swipe” activated electric hatch; a feature that’s always handy when you’ve got your hands filled with grocery bags. The Pathfinder also boasts witty convenience features such as a second-row bench seat that tilts forward to allow third row access even when a child seated is mounted onto it. Lower that rear bench, and the Pathfinder offers a segment-leading 1450 liters of stowed cargo space. Furthermore, the second bench will accommodate full size adults without fail, but that third row is best reserved for children. 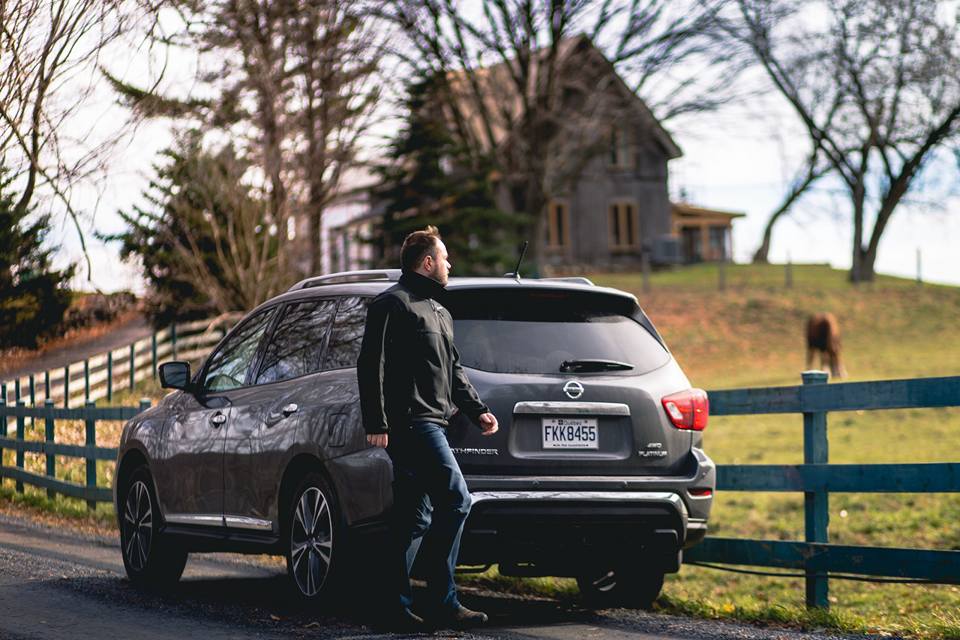 Prices for a 2017 Nissan Pathfinder start at $32 498 for a front-wheel-drive version. Yes, you read right, a front-wheel drive Nissan Pathfinder is actually a thing – urgh. All-wheel drive trims begin at $35 398, where the Pathfinder then climbs through 5 available trim levels to finally top out at a staggering $48 398 for a Platinum model. Platinum, if you feel compelled to go that far into the Pathfinder’s trim range, will add to an already fully loaded and leather wrapped SUV 20-inch wheels, a collision mitigation system with automatic braking, heated and cooled front seats, as well as two 8-inch, seat-integrated screens with a DVD player and wireless headphones to keep the kids busy. 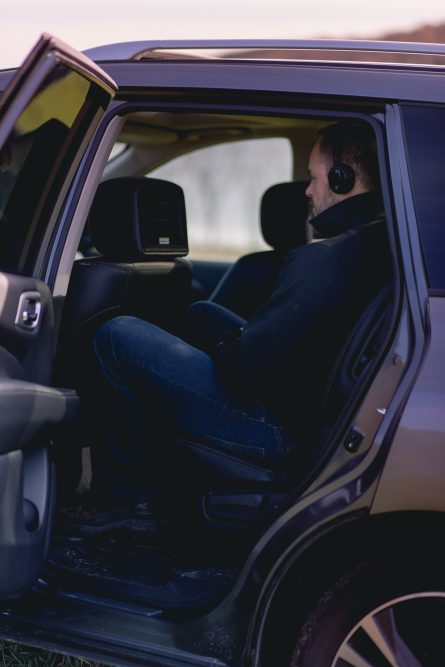 To wrap it all up, the 2017 Nissan Pathfinder is what I would consider midpack in the segment. It doesn’t quite excel at anything but gets the job done in the areas that matter. Although very far from its rugged sports utility vehicle roots, Nissan has fitted it with enough off-road tech to keep families out of trouble which is essentially, and sadly, what the owners of this nameplate now look for. Truth be told, this is a vehicle that will feel more at home doing the school run than jumping through a sand pit over the weekend. That said, the Pathfinder may succeed at being a lifted minivan, but the reality is, some of its competitors will haul your family while also delivering a spirited driving experience along the way.

Review of the 2017 Nissan Pathfinder by William Clavey

–
– CVT transmission sucks the life out of the engine.
– Questionnable placement of certain controls.
– Lack of engaging driving dynamics.