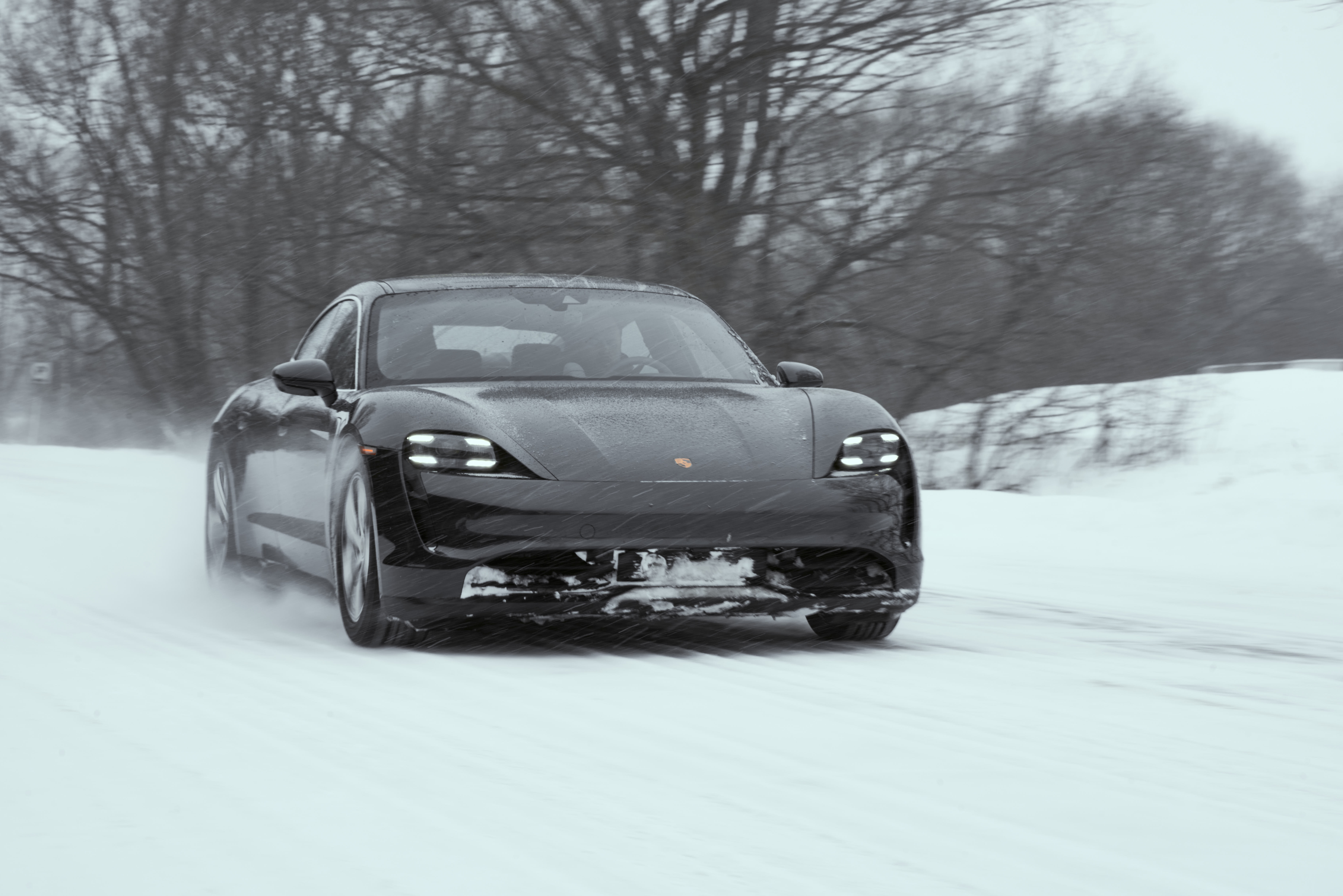 The 2021 Porsche Taycan 4S marks the first time I drive Porsche’s first electric car. So no, I still haven’t driven the Turbo and Turbo S models. But this “entry level” version is still damn impressive. Yes, I too feel that the Taycan has fallen short in the range wars against the Tesla Model S. But it makes up for it by being something a Tesla could never be: a Porsche. 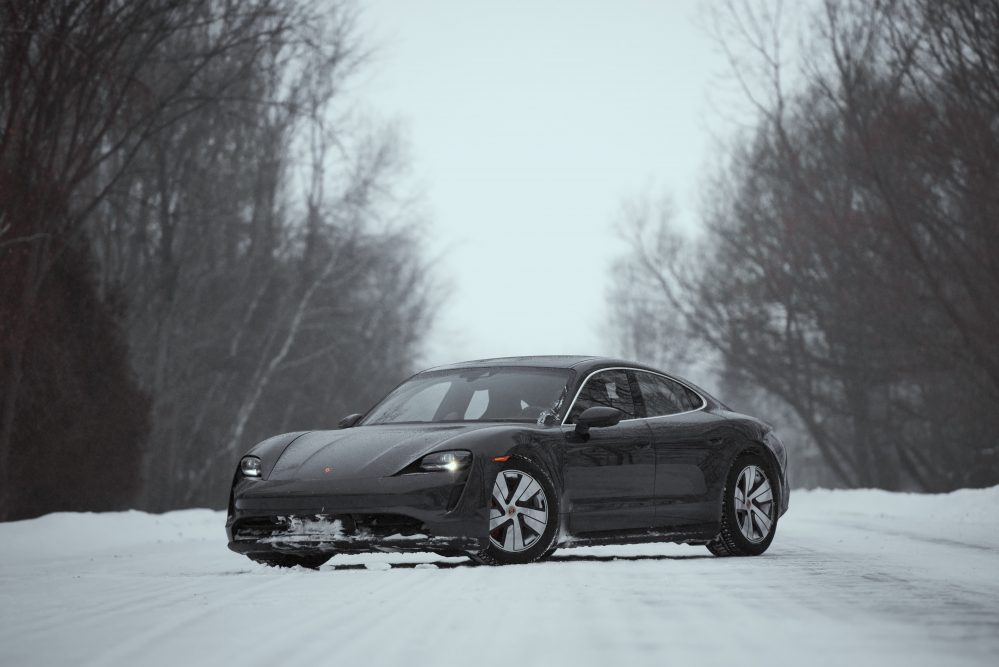 One thing the 2021 Porsche Taycan sure nails is styling. Even in its most basic form, it’s got the hips, the stance and the craftsmanship to be taken seriously even by the most hardcore Porsche enthusiast. The Taycan is no joke. After all, this is the car that will take us into the next-generation of high-performance german sedans. 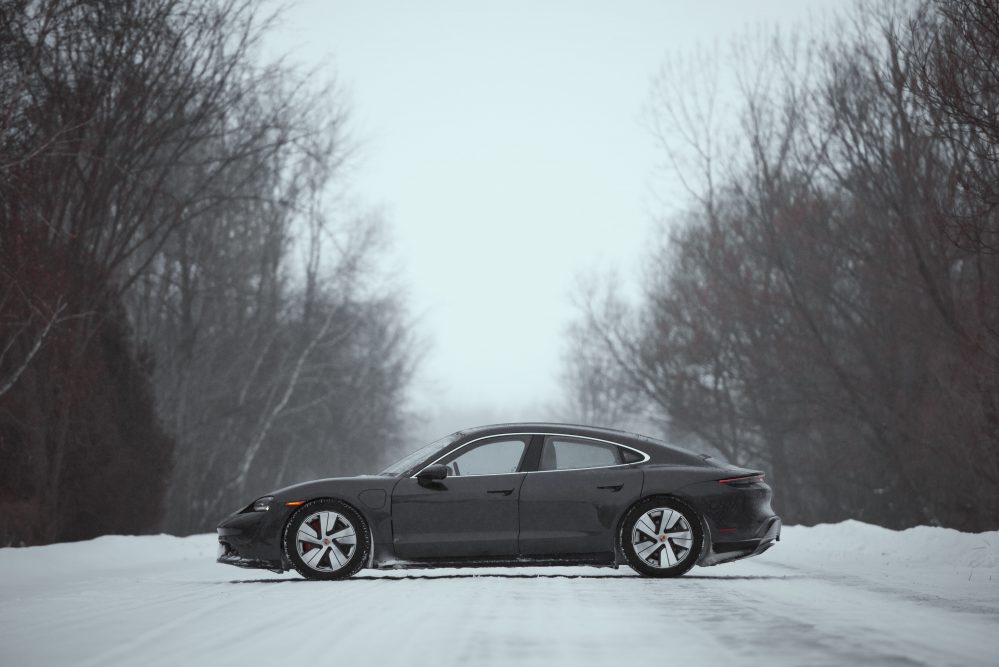 Porsche could have simply stuffed a set of batteries underneath a 911’s floor and call it a day. But no. The Taycan had to be a clean sheet of paper so it could build its own legacy. And so far, it’s off to a damn good start. This 4S may be the baby model, but there’s nothing baby about it. The main difference between this and a Turbo is a less powerful rear electric motor. All Taycans come standard with two-motor all-wheel drive. The front motor is the same across the entire model range. 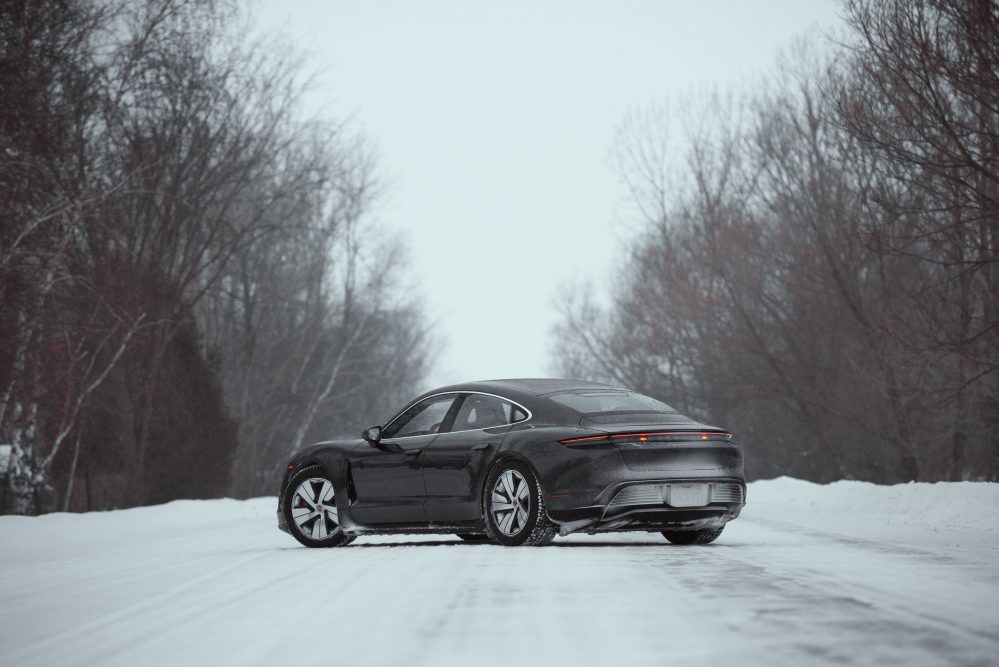 Powering the 4S is a 79.2 kWh lithium-ion battery pack, for a combined output of 522 horsepower and 450 lb-ft of torque. My car had the upgraded 93.4 kWh battery (a $6,360 option) which boosts things up to 562 horsepower. The EPA estimates that the Taycan 4S will travel up to 363 km on a single charge. That’s a full 300 km less than what Tesla offers in the similarly priced Model S Long Range. 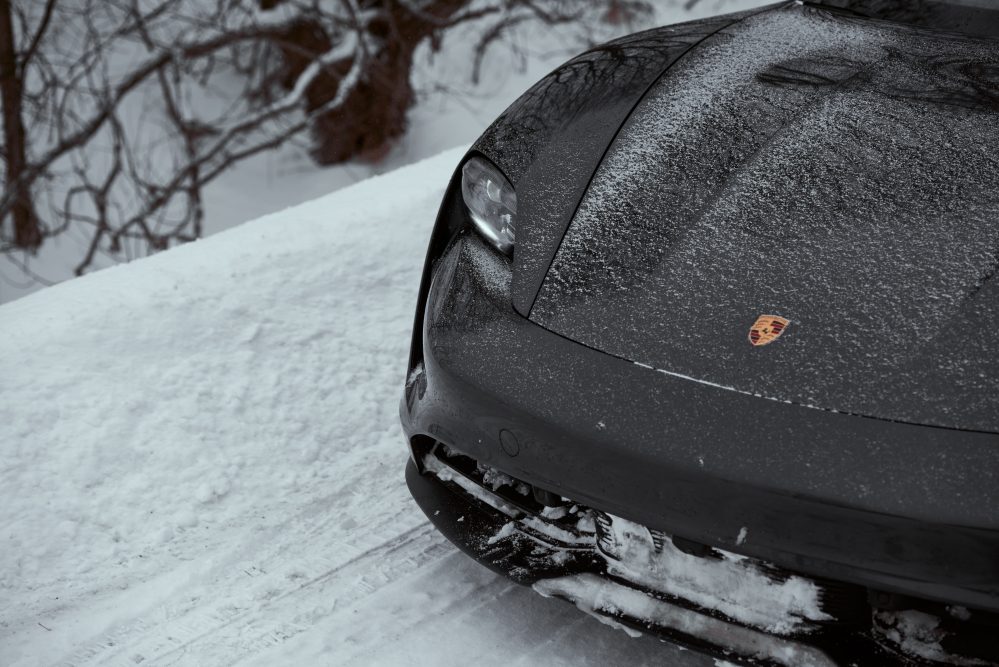 Nevertheless, the Taycan 4S proves that even the most basic of Porsches remains a highly potent automobile. Acceleration from 0 to 100 km/h is achieved in a brisk 3.8 seconds, while the larger battery drops that number down to 3.6 seconds. 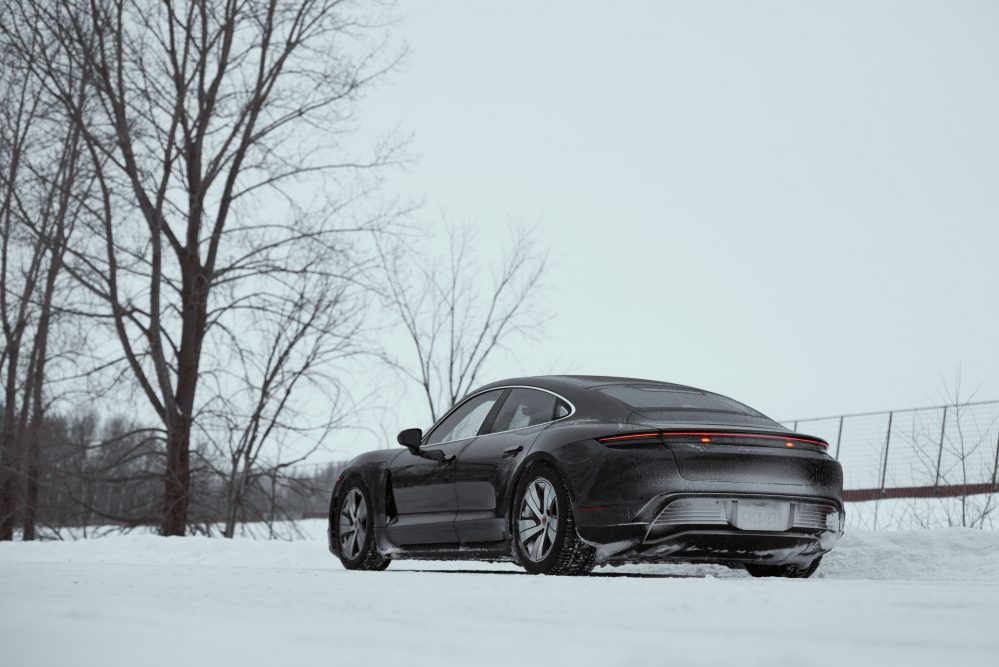 But even if it’s down on power next to a Turbo, the 4S is still highly expensive, kicking off at steep $119,400. My model had a few of Porsche’s ridiculously priced options, like the $2,330 adaptive cruise control and the $1,270 wireless phone charging pad. Is Porsche aware that these things come standard in a Kia now? The final sticker price for the example you see here was $149,700. 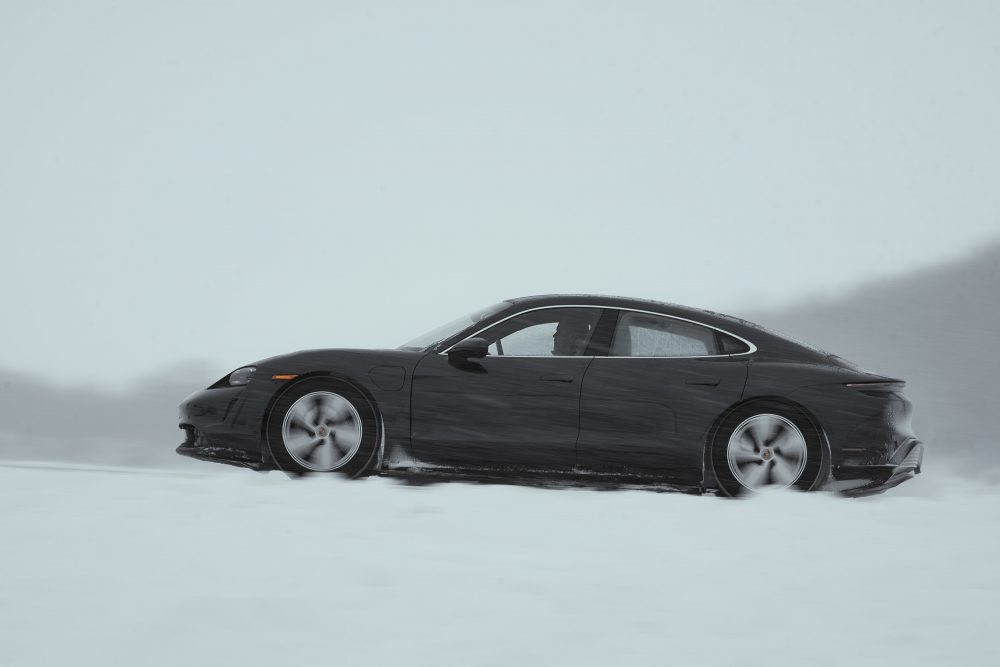 While the 2021 Porsche Taycan 4S is a smaller sedan than a Panamera, it’s still very much a grand tourer in its own right. The Taycan rides smooth, is always impeccably quiet and is as solid as rock. This is a heavy car due to its battery intensive body. But most of that weight is nestled between the axles.

Add to that hyper precise electric motors, and you end up with a tremendously stable winter ride. As far as daily driving a Porsche year round goes, it doesn’t get much better than this. 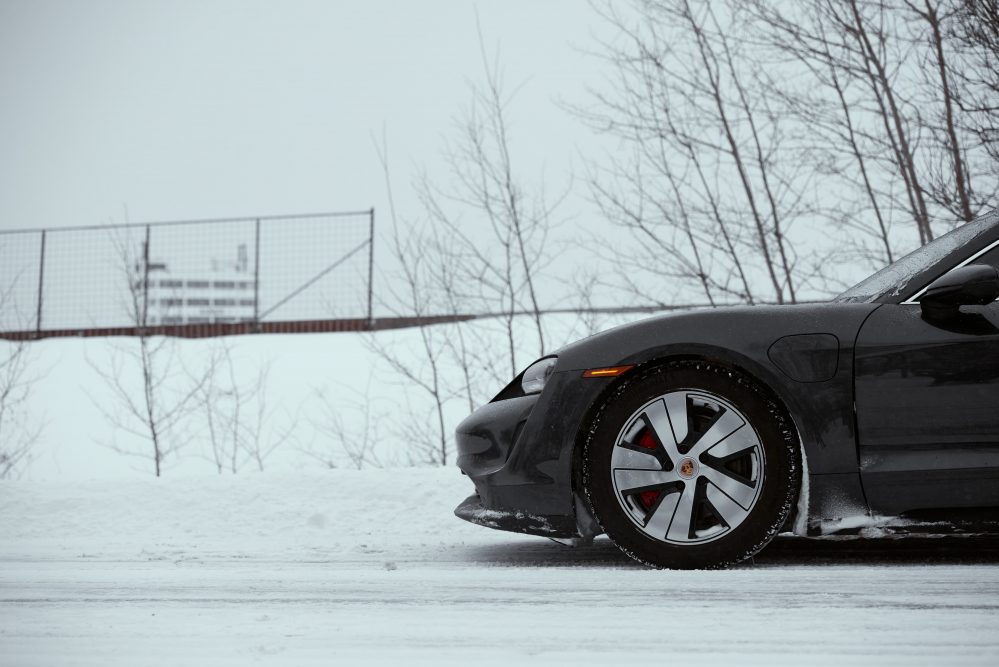 Porsche did a fantastic job of calibrating the Taycan’s available drive modes. Turn the wheel-mounted rotary knob to Range mode, and the Taycan puts on its most efficient shoes, lowers the car’s power output and rations what energy it has left. Thanks to battery preconditioning, I was able to warm the Taycan’s battery prior to hitting the road. This allowed the onboard computer to predict a solid 335 km of range, only 30 km less than the EPA’s claims. Not bad considering it was -20 degrees outside. 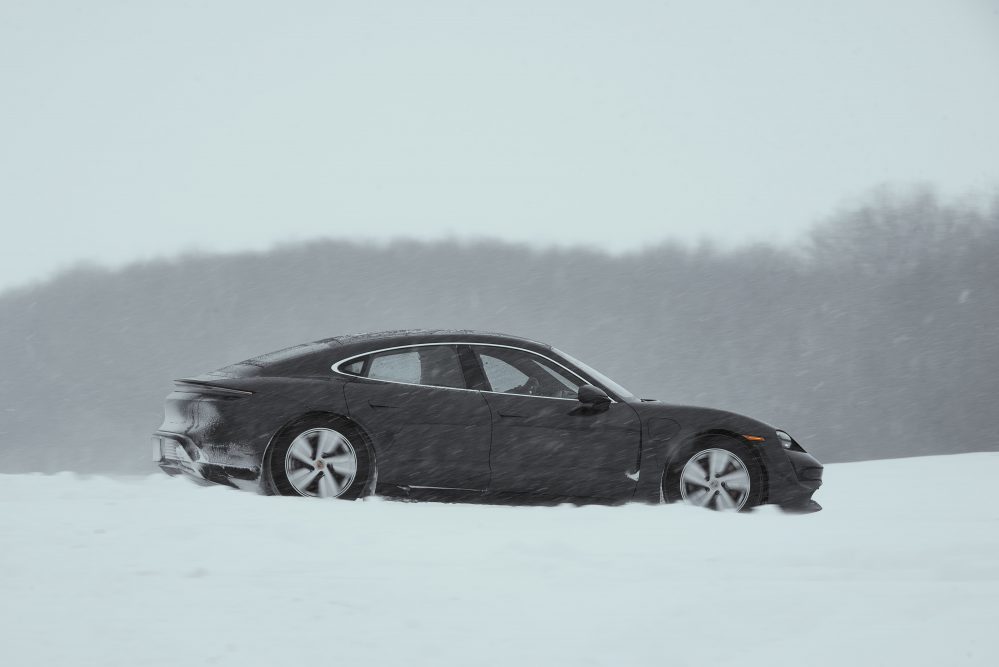 Set the Taycan to Sport Plus mode, however, and it hunkers down, pops its rear spoiler and unleashes the battery’s full potential. In this mode, the car’s adaptive dampers are stiffer, the ride height is lowered and there’s more resistance in the steering wheel. Punch the throttle, and the Taycan launches – no – teleports forward as if you’ve just activated lightspeed in the Millennium Falcon. 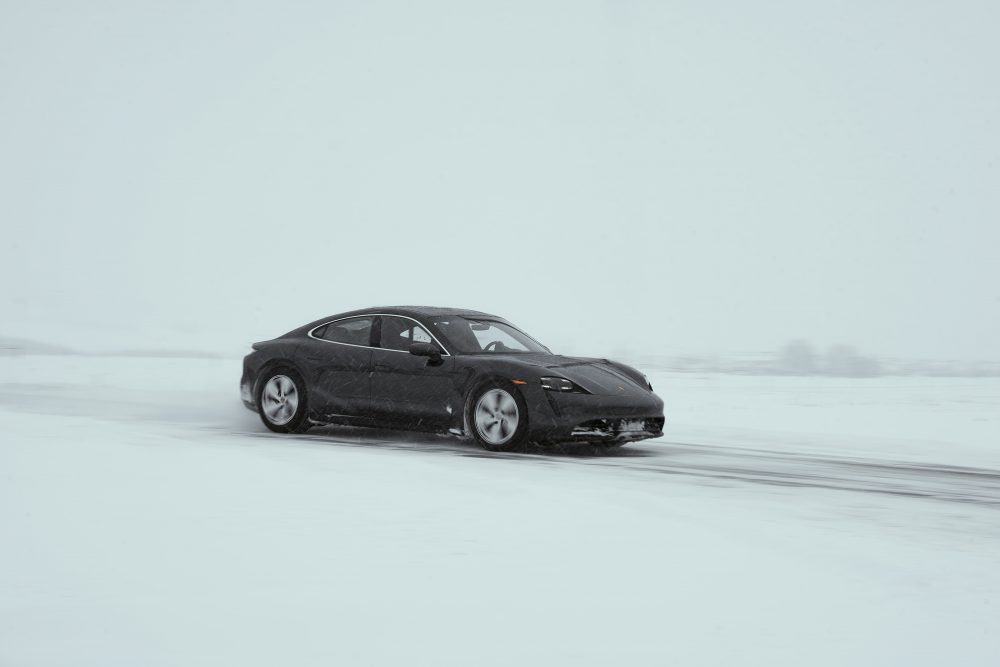 This is a fast car by any metric, one that also finds grip even on the slipperiest of surfaces. But it also deploys its performance in utmost effectiveness. It just never misses a beat, responding to each command with a level of precision the human brain can barely keep up with. 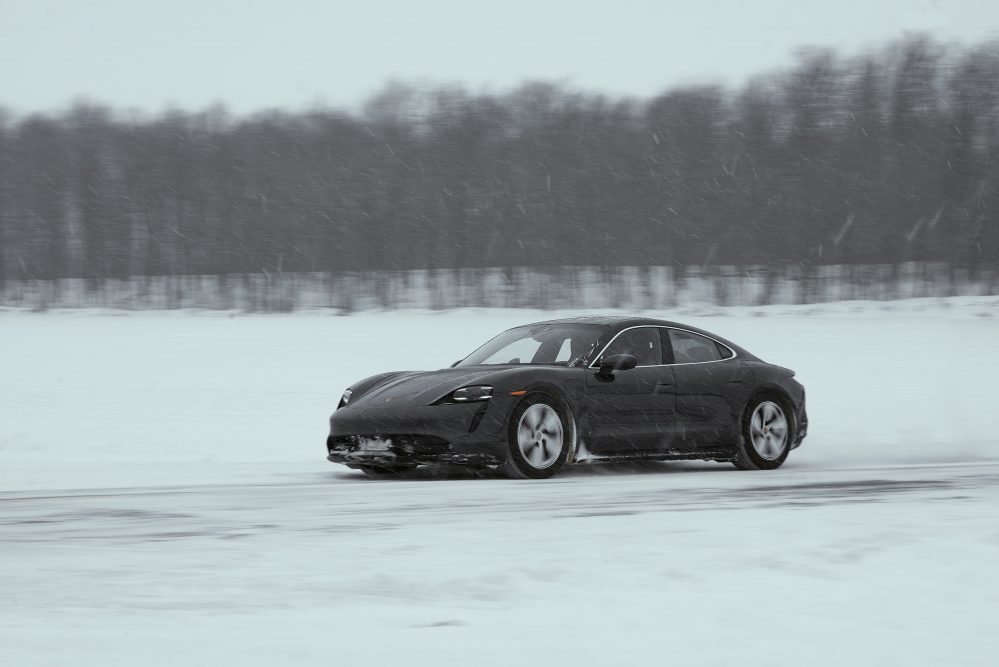 Perhaps where the Taycan impresses the most is in its analog feel. Porsche added a two-speed transmission to its rear motor to give it more top end grunt. Once you hit about 150 km/h, you hear a vague clunk underneath your butt, followed by a a second surge of power that rushes up your back. It’s a strangely mechanical experience from an otherwise robotic feel. 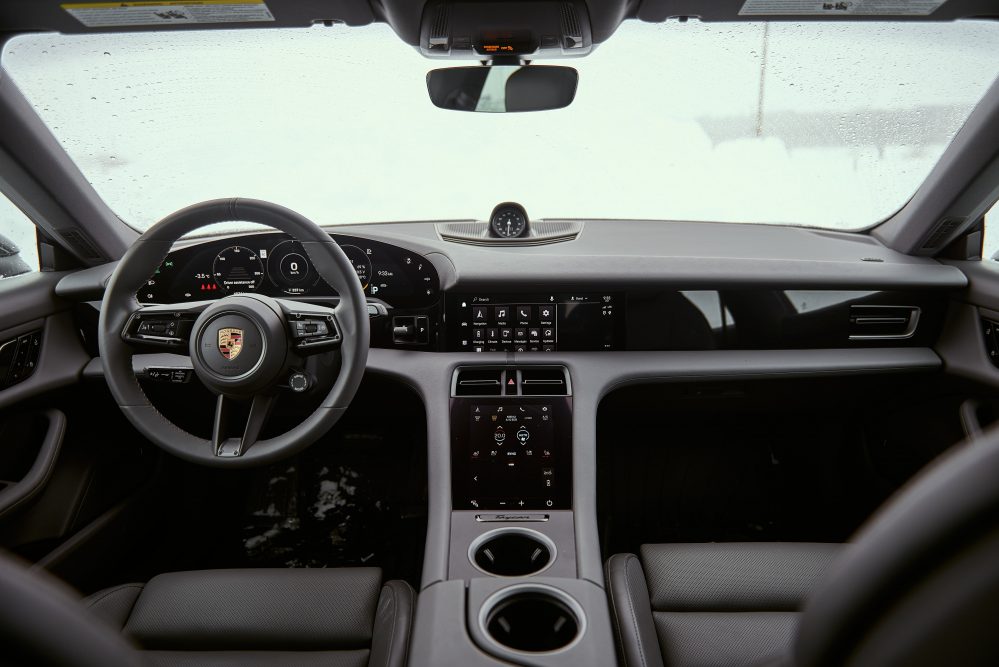 The Taycan’s cabin envelopes you in a warm, yet highly digital cockpit. Everything is screen, with an elegantly curved main display that beautifully mimics Porsche’s iconic triple gauges. A smaller screen was placed at an angle on the center console. It can be split in two, with quick keys on top to manipulate HVAC, phone or audio, while the lower section can display information about the battery. 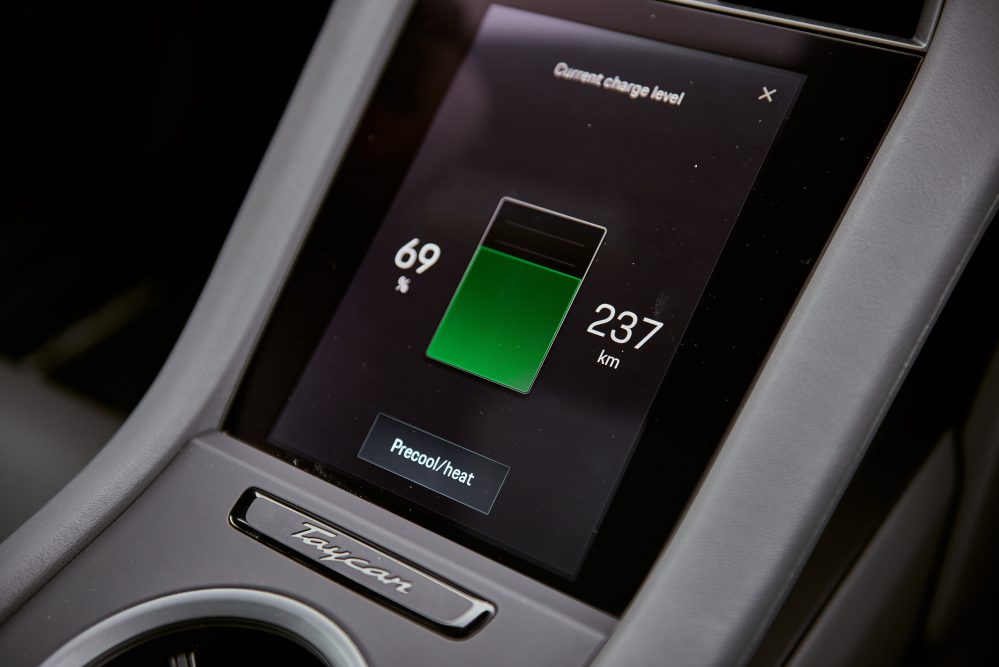 That lower screen can also act as a trackpad to operate the main infotainment screen. All of it feels kind of overwhelming at first, but you quickly immerse yourself into the Taycan’s digital interface. Once you’ve figured out your favorite shortcuts and ergonomic preferences, it’s not too hard to live with. 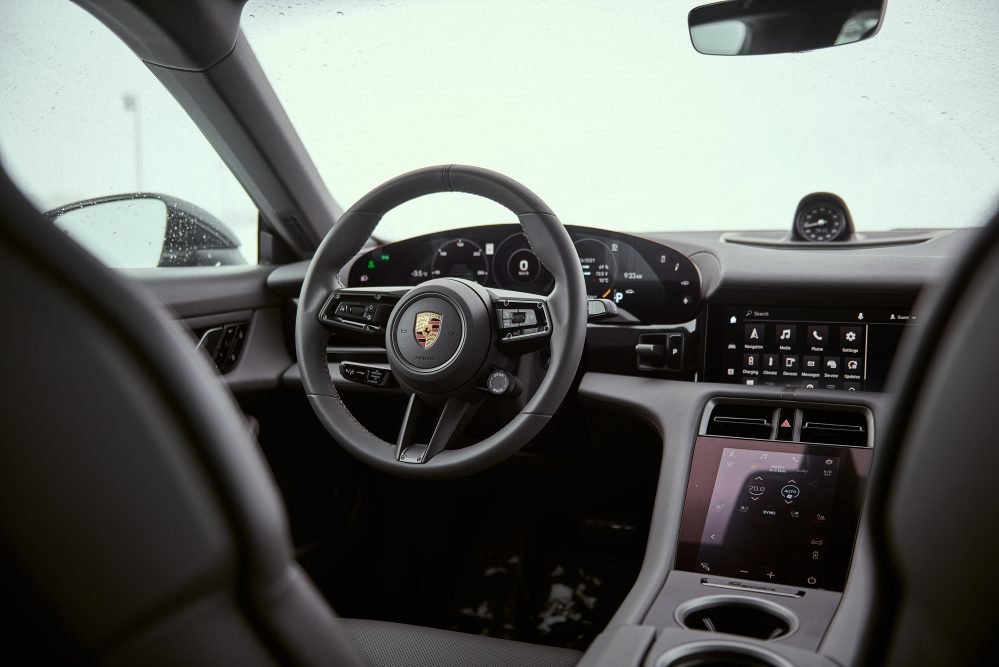 Seat comfort is impeccable, both front and rear, and build quality is above average, but for some reason, this is one of the most difficult cars to get in and out of. Some of it has to do with the car’s tiny door openings, but also because of its low floor. It feels like you’re falling inside the car when hopping inside. 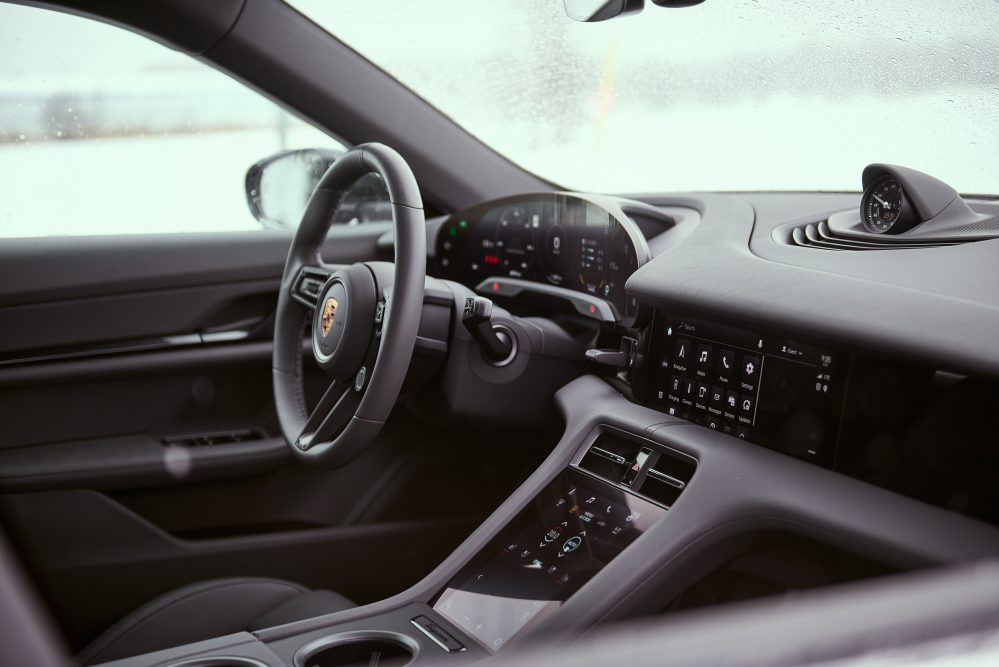 But once you’re comfortably strapped in its sport bucket seats, the Taycan’s two bumps on its hood make you feel as though you’re driving something special. This car also makes huge strides in regenerative braking. Hit a tiny button on its steering wheel and it’ll activate a single, preconfigured regen setting, similar to what you get in a Tesla. It all operates in utmost precision. At its peak, Porsche’s system will recuperate up to 270 kW of energy. 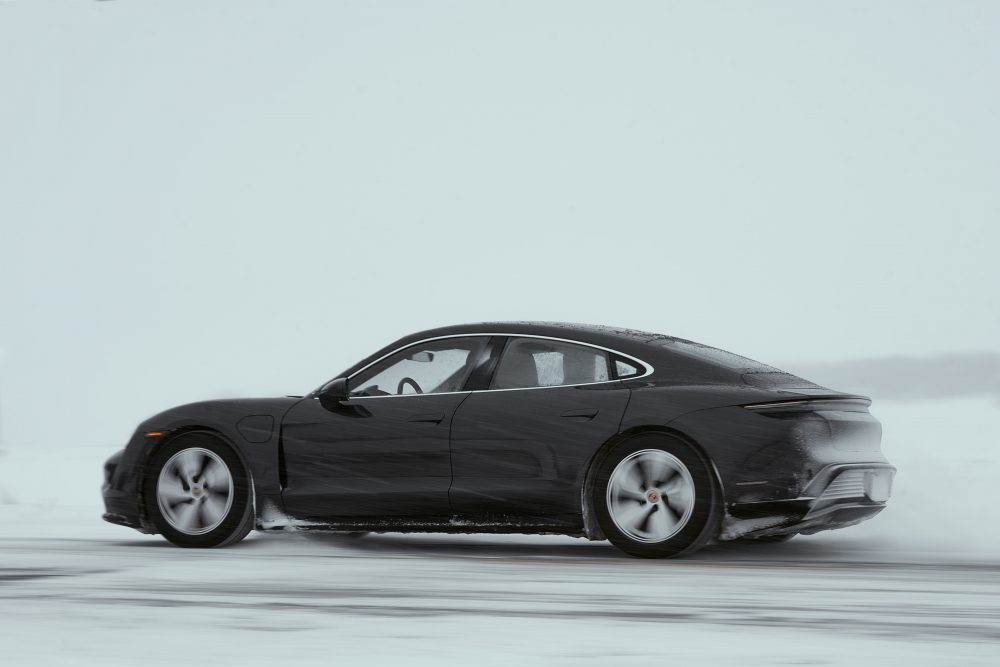 The 2021 Porsche Taycan 4S may not offer as much range as a comparable Tesla Model S, but honestly, it doesn’t matter. It makes up for it by delivering impeccable build quality, a surprisingly analog feel and blistering performance. Above all, it feels like a quality item. Like something special. Like a Porsche. And it delivers it all with the brand’s expected levels of craftsmanship and excellence. As a first effort in the electric world, Porsche has hit a homerun. I’m now curious to see where it’ll bring us next.