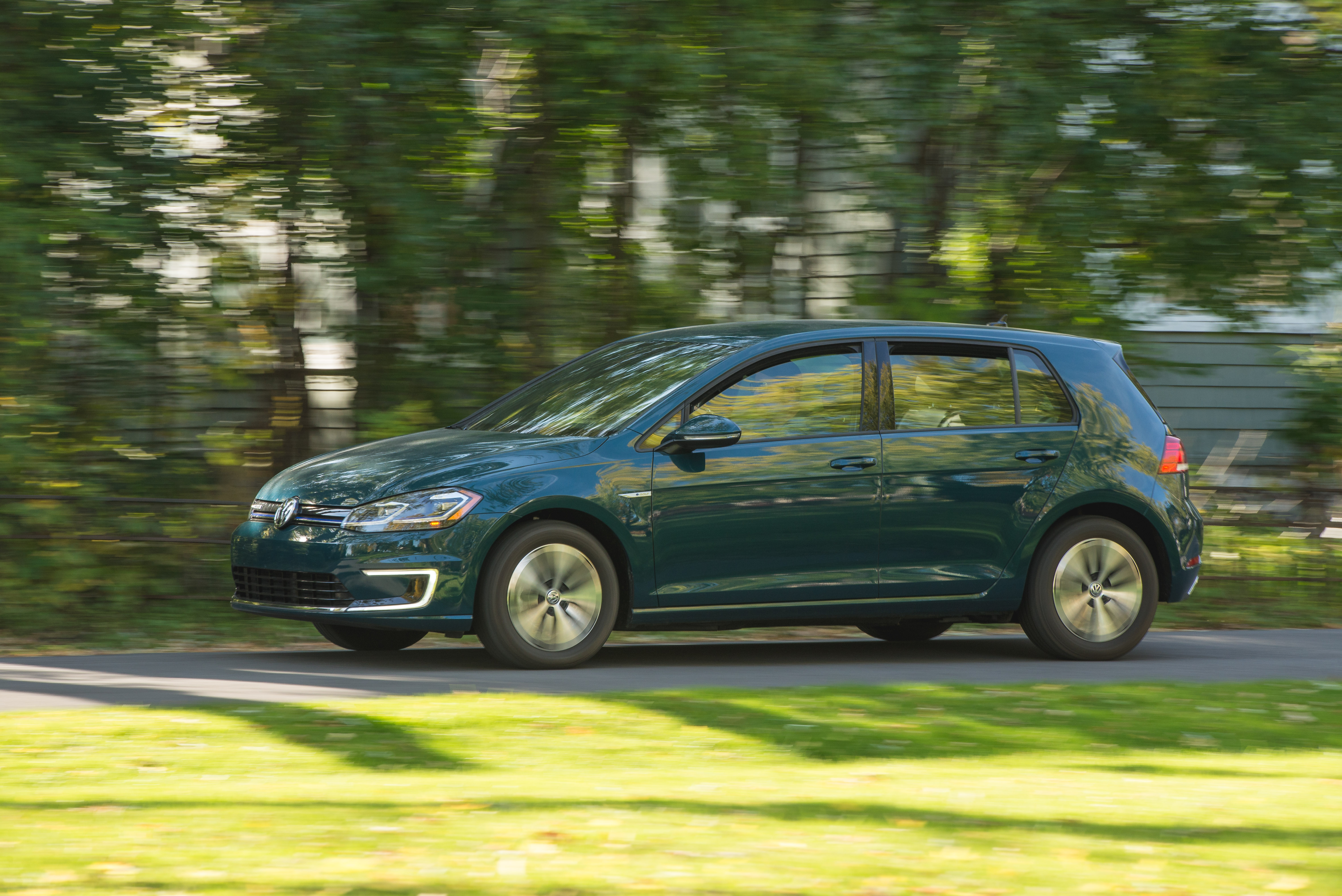 I know, that’s a big claim, but stay with me on this one. Sure, everyone’s going crazy over Tesla. And many will argue that for roughly the same price as an e-Golf, or any other electric version of a normal car, you could get a Nissan Leaf which will get you more range. But that’s not the point. Everyone’s caught up with range these days. The 2018 Volkswagen e-Golf isn’t cool because it’s fast, range-plenty or particularly more innovative than other EV’s out there. It’s not. The e-Golf is the best EV you can buy because it’s a Golf. Plain and simple. And the Golf is the best possible automobile in which you can shove an electric motor. 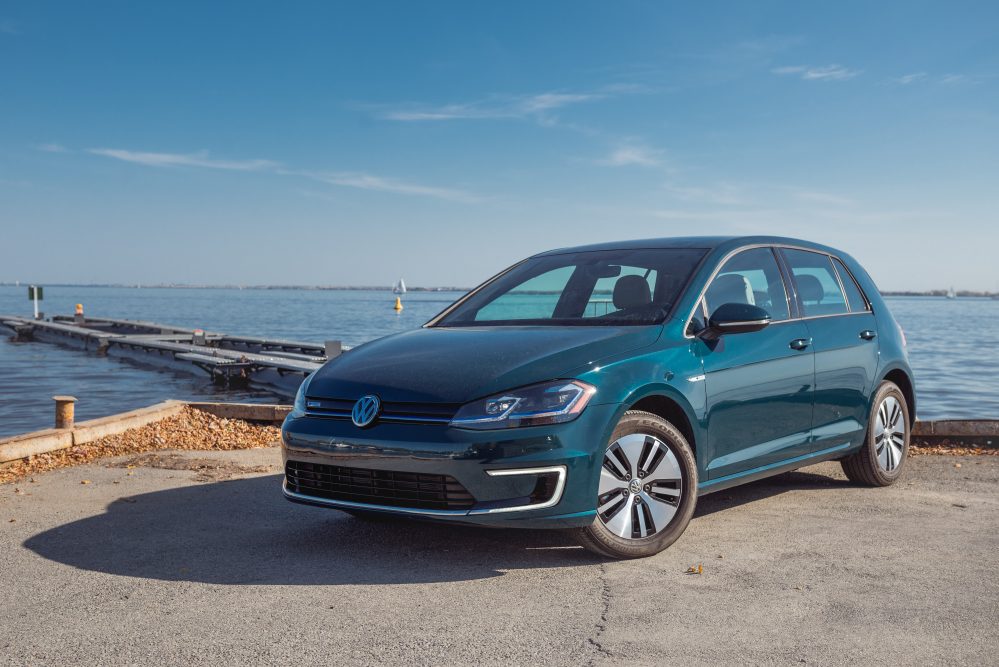 When I first laid eyes on this e-Golf, painted in its shade of Peacock Green Metallic – yes that’s actually the name of the paint job – I thought this was some kind of joke from Volkswagen. I mean, we’re all aware of what the German titan has done to our environment over the past decade or so. I’ll avoid digging into the auto journo clichés of how bad and cynical diselgate was. Perhaps Hitler would have considered it an excellent business case. I can’t believe I just wrote that. 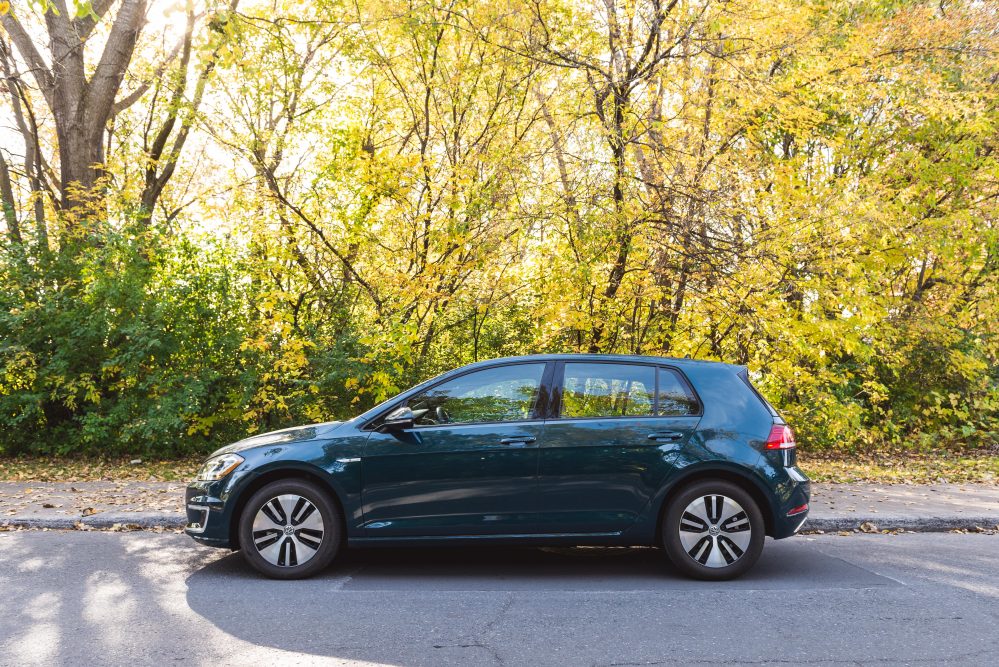 Anyway, gazing at the absurdly green German compact (I secretly love that green) which happens to conveniently burn no fuel at all, made me feel odd inside. There it was, sitting there, grinning at me with its cute little face felt as if Volkswagen was screaming “WE ARE SORRY” from the top of its lungs. Hey, VW, it’s fine, you can’t get more green than this. Will this car actually be any good? – I thought. Or is it here simply to apologize for one of the largest screw ups the automotive industry has ever witnessed? 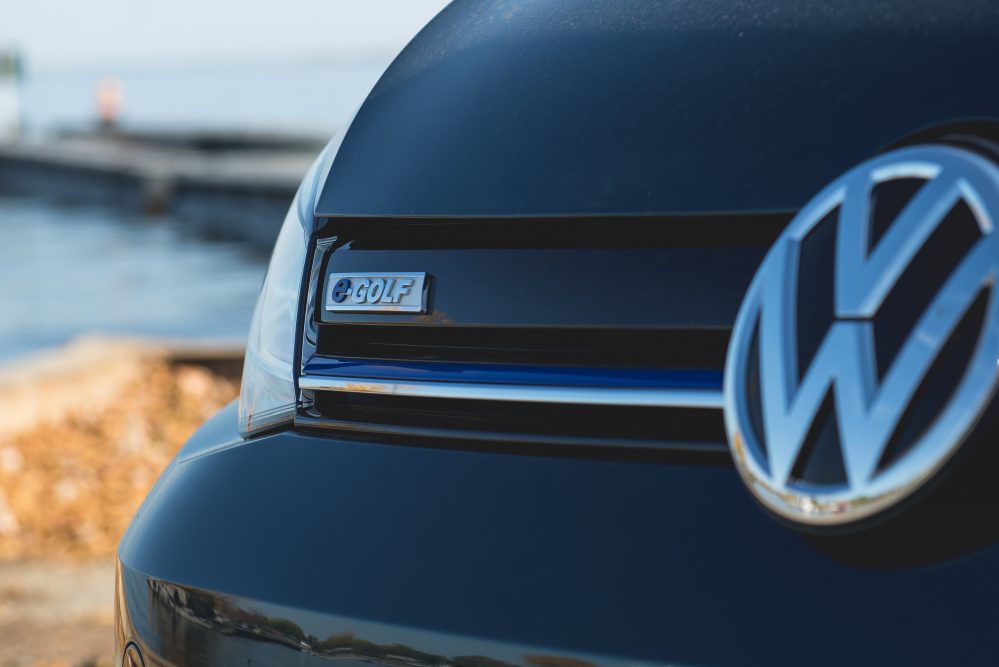 It sure looks great! Then again, it’s a Golf, so of course it does. I’m happy VW didn’t make it look weird like other EV’s. The Leaf is fine as an electric car. But it also resembles a block of plastic that melted in a microwave oven. Except for a set of silly wheels, and yes, stupid LED everything on the front fascia – why do carmakers keep doing this with electric cars? – this is essentially the same Vdub your teenager rides around in.

I’ve said it before, and say it again, the Golf is a classless car. It transcends social prejudice. It’s as much at home in a college parking lot as it is sitting at the local country club next to set of BMW’s, Mercedes-Benz and Jaguars. Everyone loves and respects the Golf. Because it’s humble and smart. I like humble and smart. 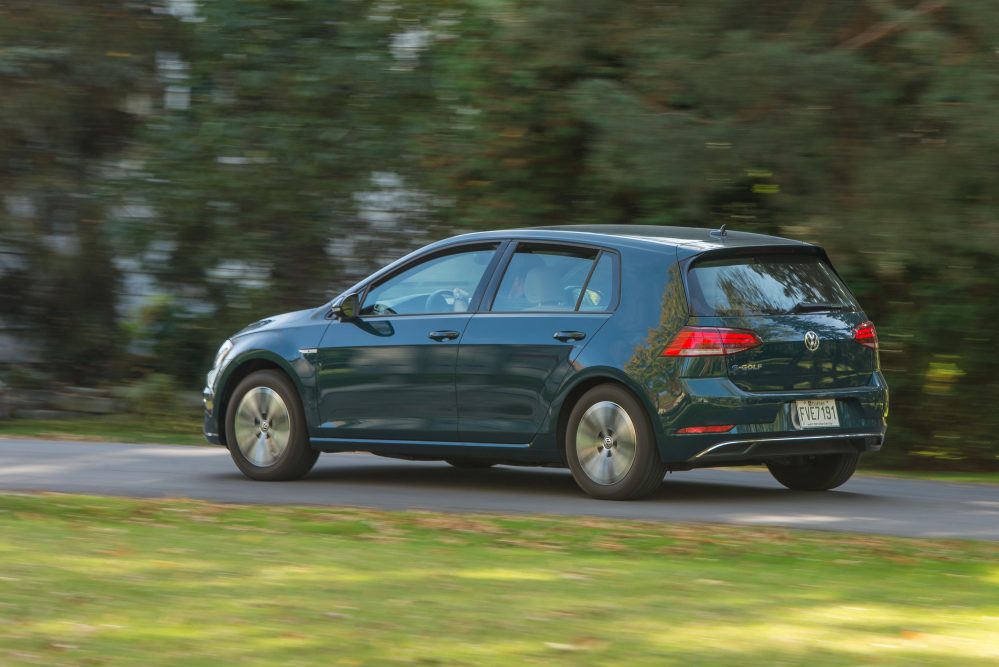 So, what exactly are we talking about here? Under the conventional Golf hood, which pops open the same way a conventional Golf hood would, sits a 134 horsepower permanent-magnet synchronous electric motor good for a lofty 214 lb-ft of torque. A T-shaped 35.8 kWh battery lies underneath the hatchback body. 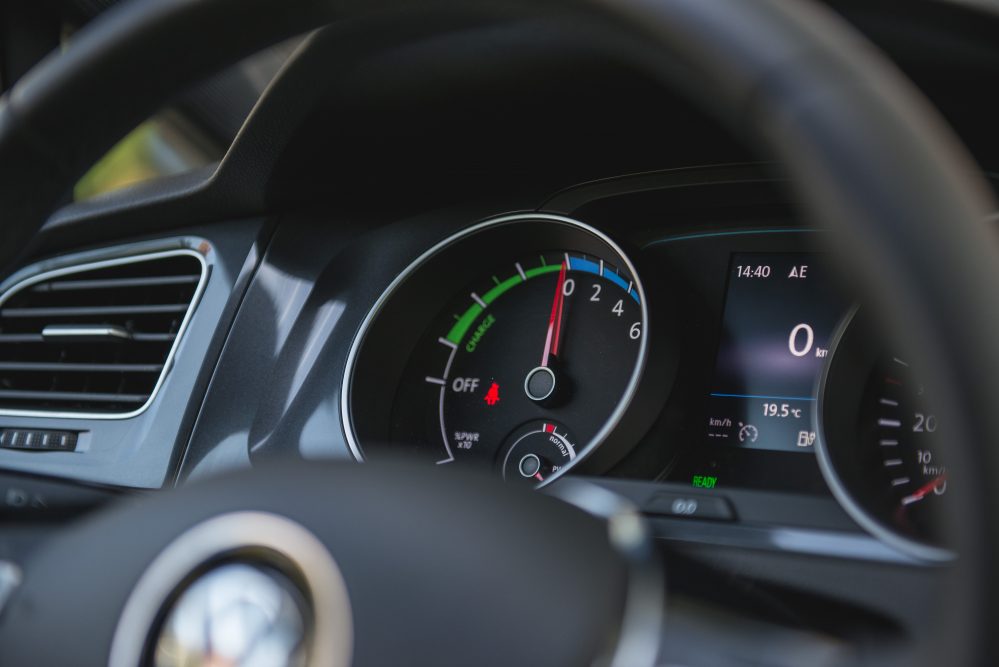 Total range is about 230 km, at least, that’s what I got with mine. It’s a bit less than a Leaf (241 km), but still much better than all other EV’s out there, except of course the Bolt and the overpriced Telsas. Acceleration from a standstill to 100 km/h is achieved in roughly eight seconds. It’s not fast, but quick enough. The only transmission available is a one-speed automatic, which, by moving the lever the same way you’d engage Sport mode in a GTI, offers up to three different levels of regenerative braking. Like I said: it’s smart. 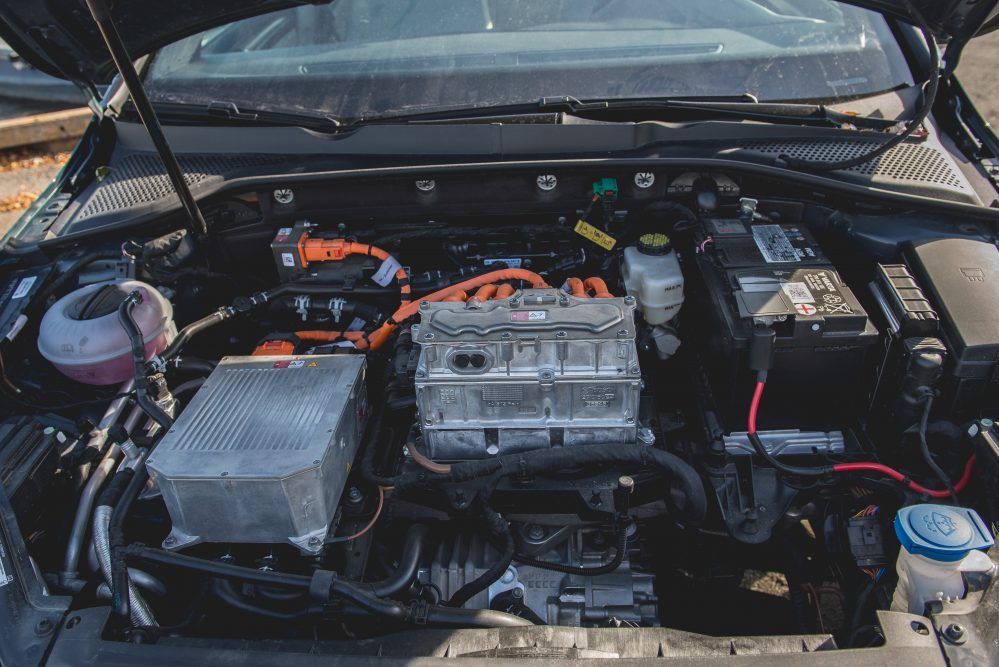 How does it drive? Like a Golf! That’s where the e-Golf trumps its competition, it’s not a penalty box to drive. It works even for those wanting to drive their machine, not the other way around. The car is nimble, like a Golf ought to be. The steering reacts in utmost tactility. Ride and handling remains relatively unchanged, albeit slightly higher tire roll due to the low resistance tires. 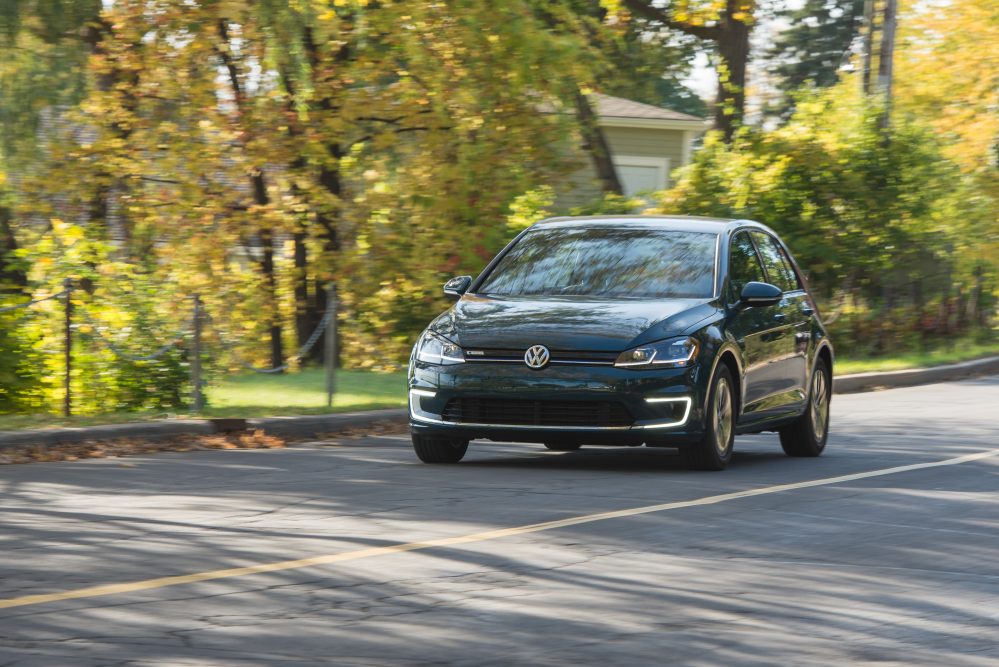 But the e-Golf is as much fun to drive as a GTI, and the performance, while not exactly brisk, isn’t soul sucking. There’s actual low-end torque when gunning that accelerator pedal. Acceleration is “spirited”. Turn in is sharp. And when activated to full blast, the regenerative braking isn’t only the best way to slow down a car, but also extends range a tad higher than the promised 230. 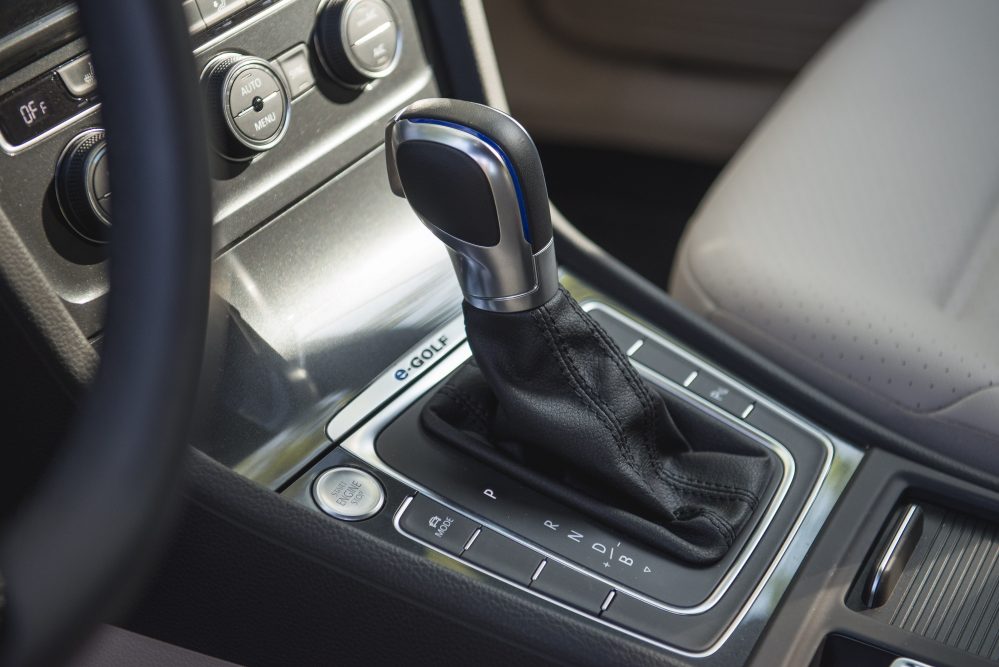 Inside, it’s business as usual. Again, it’s a Golf. Gauges are the same. There’s a cool blue lighting theme at night. And my tester was fitted with a beautiful beige interior, giving it a nice, premium look and feel overall. Battery range is presented where the gas gauge would normally be, which isn’t only genius, but also helps calm down range anxiety.

“How much range do we have left?”

“We’ve got half a tank left honey. We’re fine.” 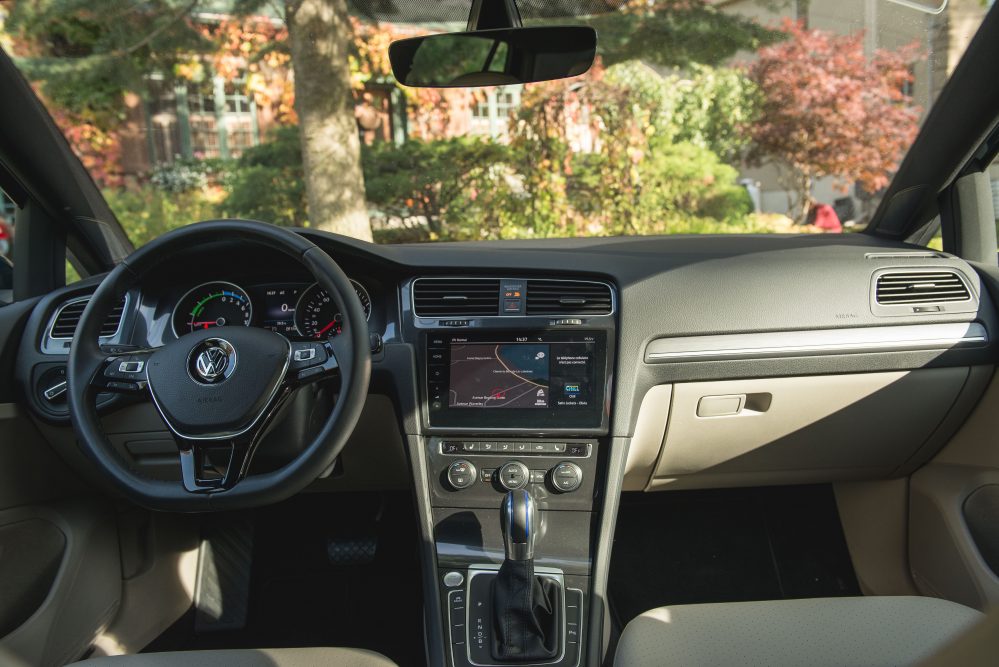 My only caveat with the e-Golf’s cabin is that new touchscreen-operated infotainment system. There’s no volume knob. VW, haven’t you read the Honda Civic reviews? Instead, there’s an annoying virtual slider thing which not only proves useless when comes time to quickly shut that radio up during a drive-through, but also only responds when it wants to. 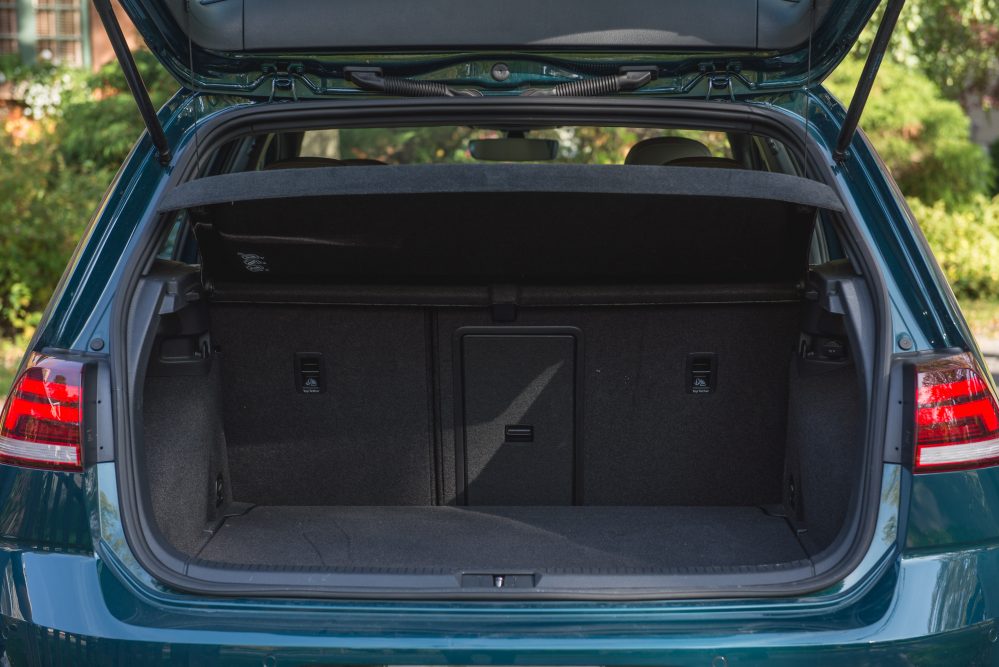 But except for that, there’s nothing wrong with the e-Golf’s cabin. It’s comfortable, roomy, well put together, and looks and feels like a million bucks; unlike the Chevy Bolt’s cabin which appears to have been made out of recycled milk cartons. Also, none of the Golf’s class-leading cargo space has been compromised (1,492 litres of total cargo) in favor of its electric heart. This is such a hard car to review… 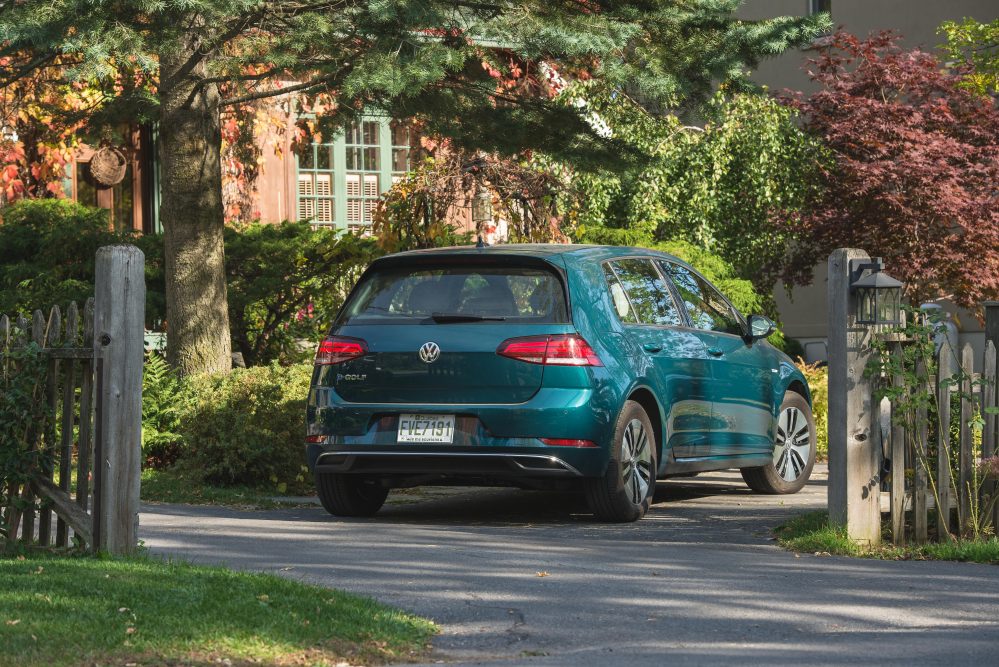 In many ways then, the e-Golf is the best electric car you can get that’s not a Tesla. It’s also rather well priced. Starting at $36 355, it’s roughly one grand more than a boring Leaf. Factor in the $8,000 governmental rebate (in Québec) you’ll be getting upon purchasing your e-Golf, and it suddenly becomes a rather affordable and very cool little EV. 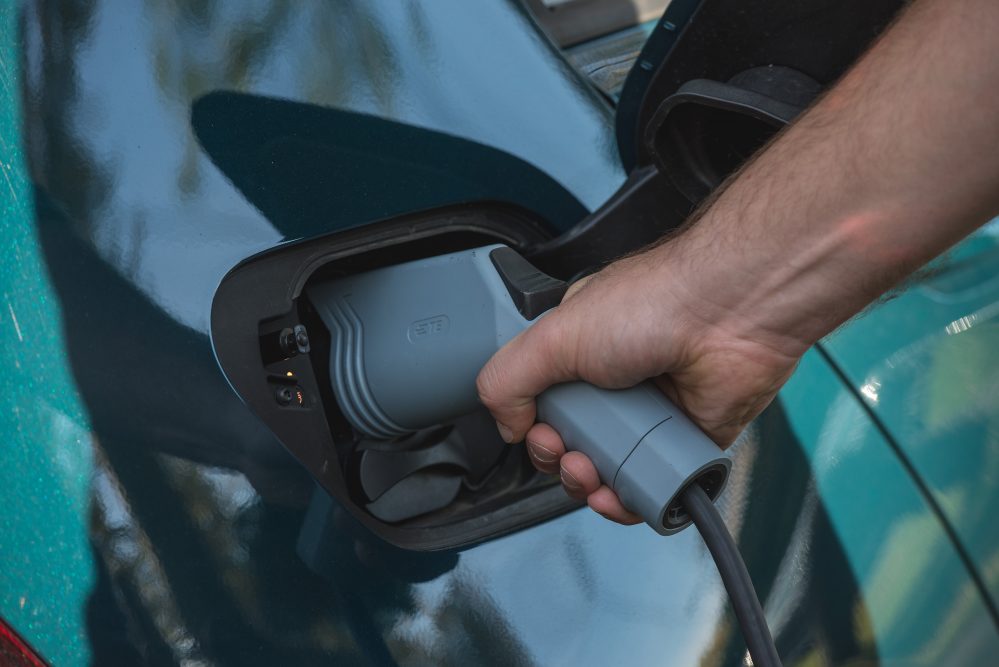 The only big issue at the moment, is range and charging times. If you dare charge this thing in a conventional 110 volt home plug, it’ll take you an entire day to get going. Connect it to a fast charging station, through the conventional Golf gas cap, and you’ll be full within one point five hour. That’s still long. And the car won’t bring you all that far. That being said, if right now, you can’t stand burning petrol and seek a fun to drive all electric little runabout, I don’t see why you should go out and buy any other EV. The 2018 Volkswagen e-Golf is absolutely brilliant.