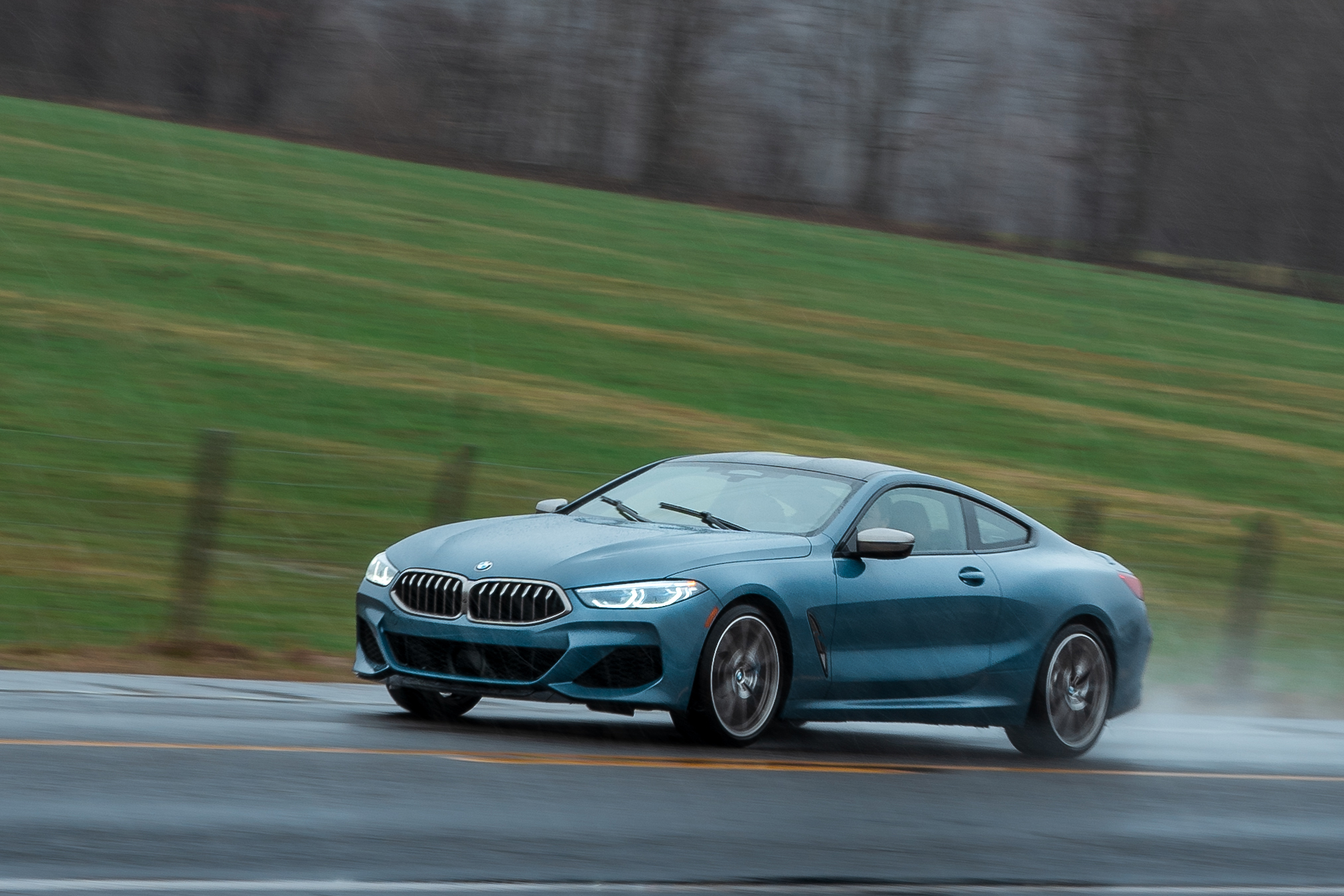 I think anybody who was around in the 1990’s remembers the BMW 8-Series. It was the odd one within the lineup, the car you’d only see occasionally, wearing a V12 badge on its trunk, pop-up headlights and fat rear tires. You remember walking next to it, peeking into its snug cockpit, admiring the thick leather seats, square dashboard tilted towards its driver with an enormous car phone sitting in the centre console. You remember telling yourself you wished having a phone like that in your automobile.

BMW pulled the plug on its flagship grand tourer before the turn of the millennium, and never made anything to replace it. The 6-Series was sort of the answer to Aston Martins, Bentley’s and Mercedes-Benz S Class coupes, but it leaned more towards a two-door 5-Series than actual grand touring material. 20 years later, the 8 Series is back, and with the 2019 BMW M850i, it promises to recapture all the magic of the original car. But does it? 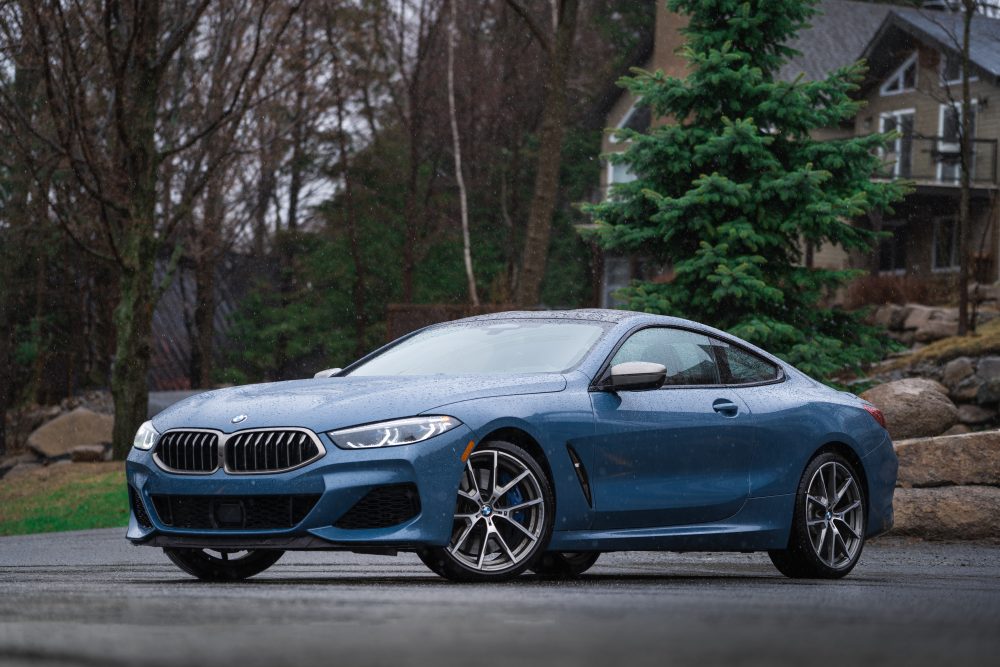 Fine, it doesn’t look as cool as the original car. I don’t think any modern automobile can replace that. But this new 8-Series isn’t an ugly vehicle to look at, especially from the rear three quarter, where its sleek coupe-like appearance gives it massive presence and purpose. 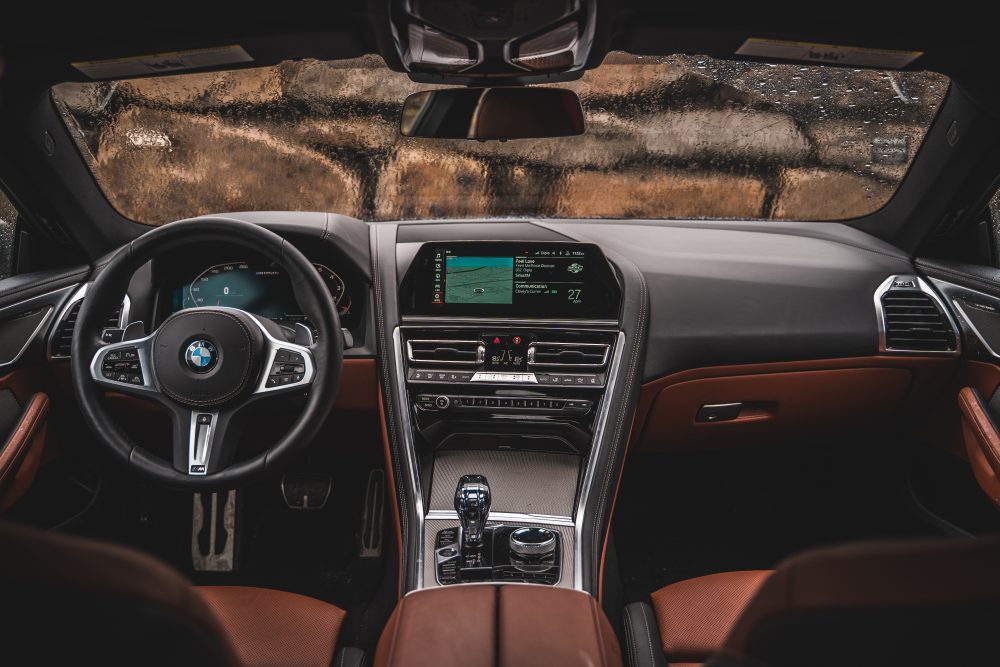 Typically, grand-tourers are big, heavy and wide, and the 8-Series is no exception. But while it may seem like a significantly larger vehicle than the 6-Series it replaces, the M850i is 1.8 inches shorter than its predecessor. Its wheelbase was also significantly shortened by 1.3 inches. Weight, however, somehow increases at 4,500 pounds, even though the car now incorporates aluminium and carbon fiber in its structure. It’s riding on BMW’s new CLAR platform, like the 3-Series, except it makes do with the same Carbon Core technology as in the current 7-Series. 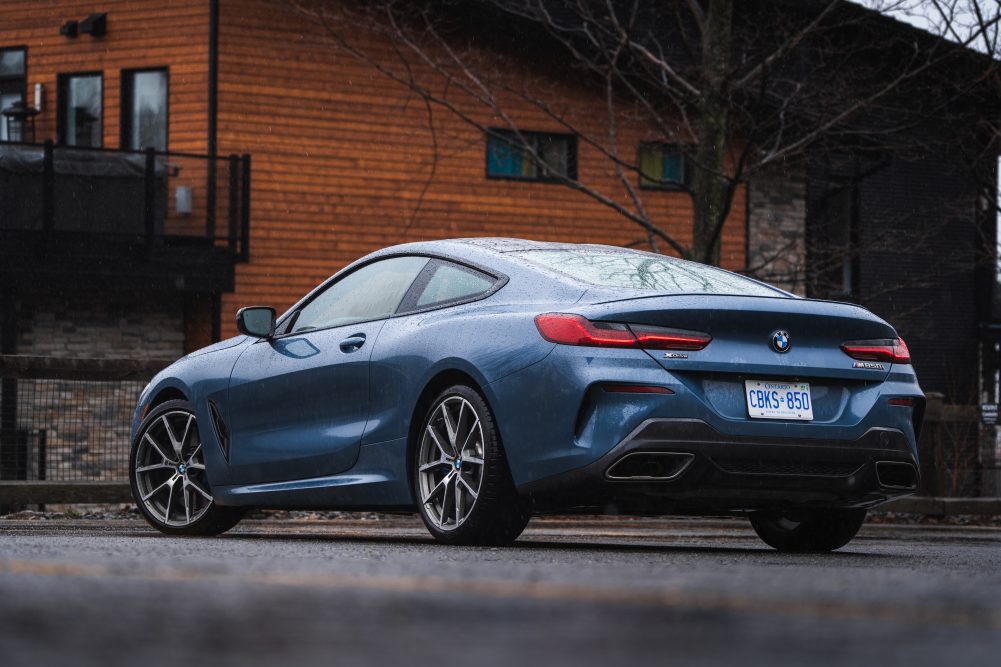 It has road presence; I’ll tell you that much. Wherever I went with the car, I got stares, hand gestures and many questions from motorists and pedestrians. I even got pulled over by a police officer, just for him to tell me he was intrigued by what the car was. 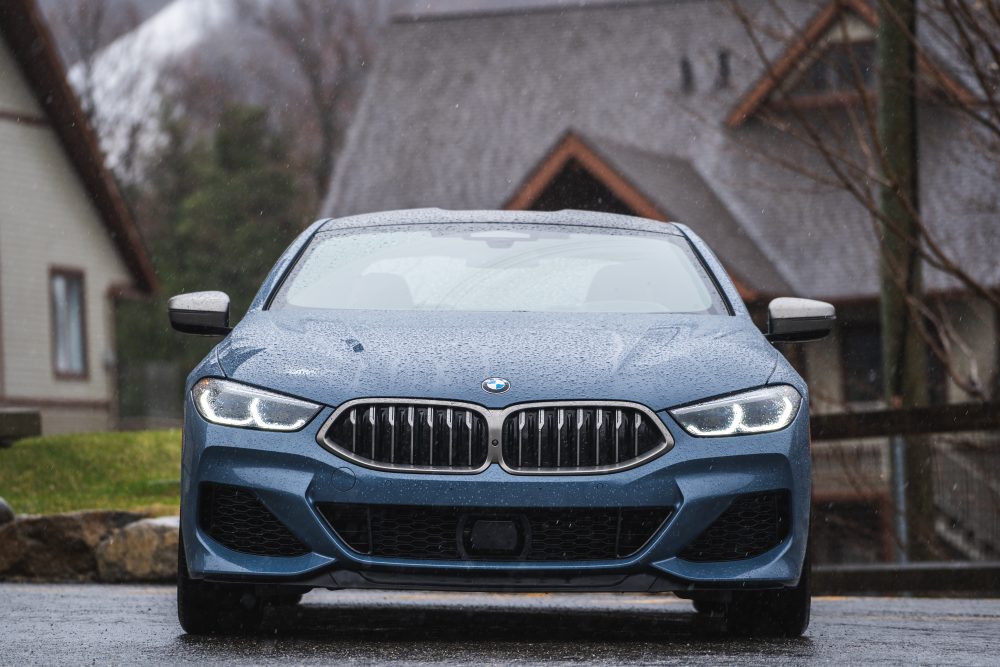 It’s also properly loud, especially in Sport + mode, where it spurs Mustang-like decibels from its quad exhaust pipes, rumbling, burbling and backfiring upon throttle lift-off – Pop-Bang!. That’s thanks to BMW’s ubiquitous 4.4-litre, twin-turbo V8. While heavier than a 6-Series, the M850i gets a bump in power; 79 horsepower more to be exact, for a total of 525 horsepower and a gargantuan 553 lb-ft of torque. The only way to get the power down is through BMW’s xDrive all-wheel drive system via an 8-speed automatic gearbox.

Acceleration from 0 to 100 km/h for this two-ton Goliath is achieved in a McLaren F1-rivaling 3.6 seconds.

What’s the M for? 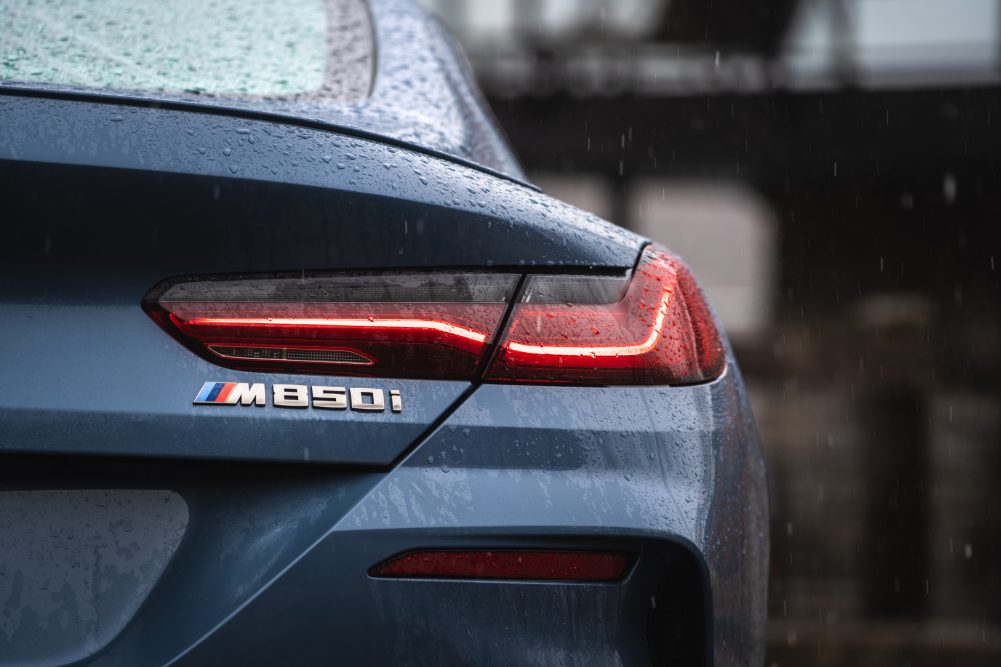 If you’re wondering why this 850i has an M inserted into its nomenclature, it’s part of BMW’s recent naming scheme for vehicles that aren’t quite M cars but have inherited some performance add-ons to make them worthy of wearing the magic letter. It’s a niche that BMW created with cars such as the M240i, M550i and M760Li, just to name a few. Except, the 8-Series comes by default as an M850i. A full-on M8 is scheduled next year. 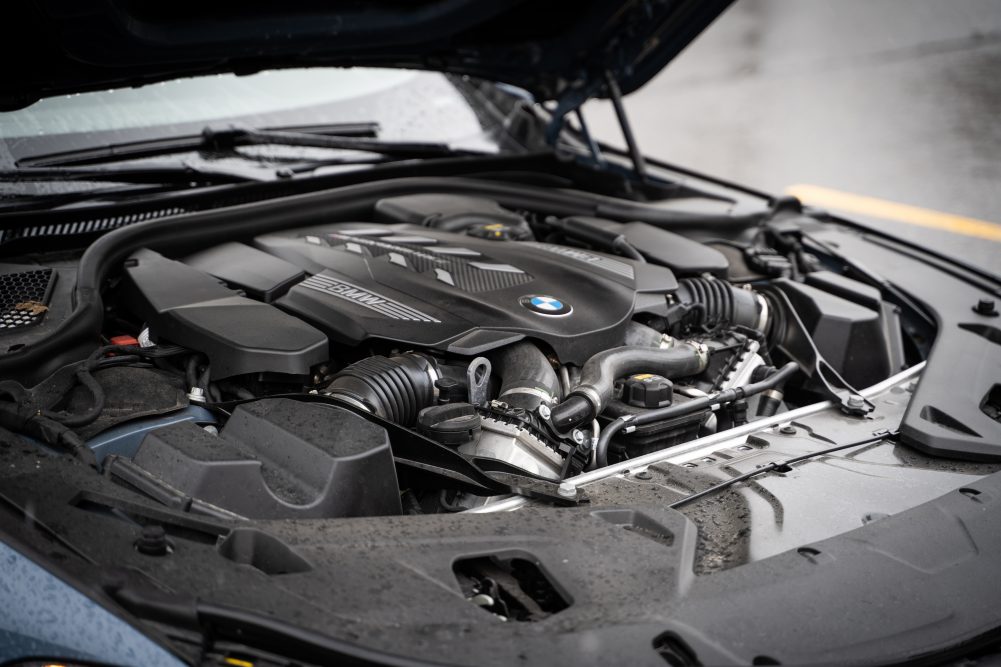 That’s what I mean when I say this car tries hard to be two cars at once, both a sports car, and a grand tourer. Unfortunately, the M850i kind of falls short at being a sports car. While immensely fast – you have no idea how fast this car is -, its girth makes it rather clumsy in the bends, even if my tester was fitted with enormous Pilot Cup 2 tires. There’s just a fair bit of understeer when pushing this car hard, even though the four-wheel steering system does its best to mitigate it all.

Also, while firm, the chassis isn’t quite up to par with the rest of BMW vehicles wearing the M badge. I have absolutely nothing to say about the brakes, however. With rotors that big, I’m not surprised. 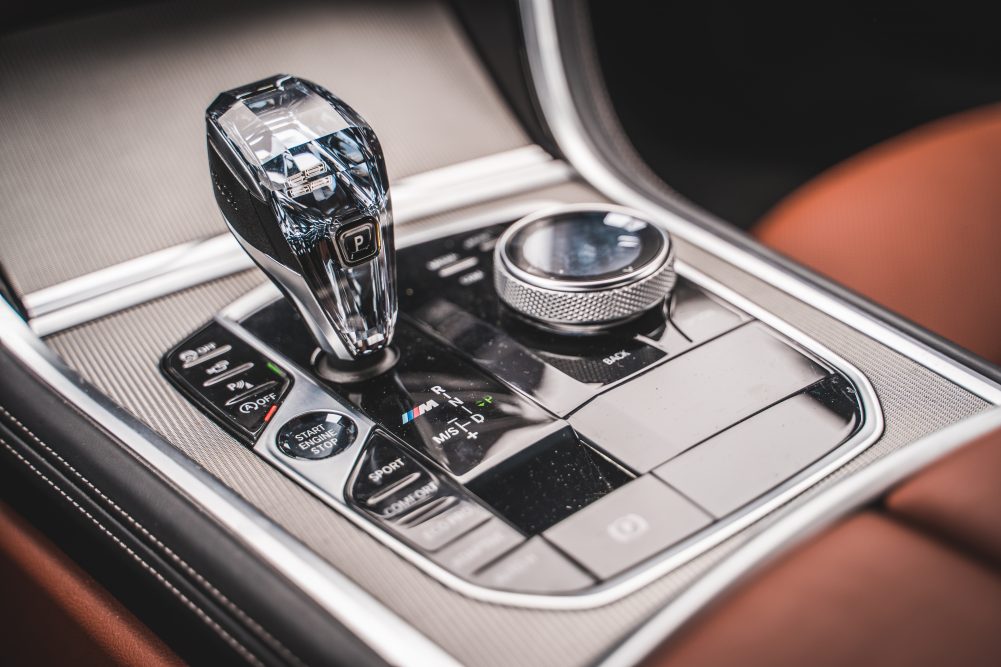 It’s out in the open road that the M850i really flaunts its muscles and succeeds at being a genuine grand touring machine. While its adaptive suspension remains significantly stiffer than say, a Mercedes-Benz S Class coupe or a Bentley Continental GT, even when set to Comfort mode, its an immensely comfortable and quiet cabin to be in. Good looking too, I love that new angular design language we’re seeing in modern BMW’. 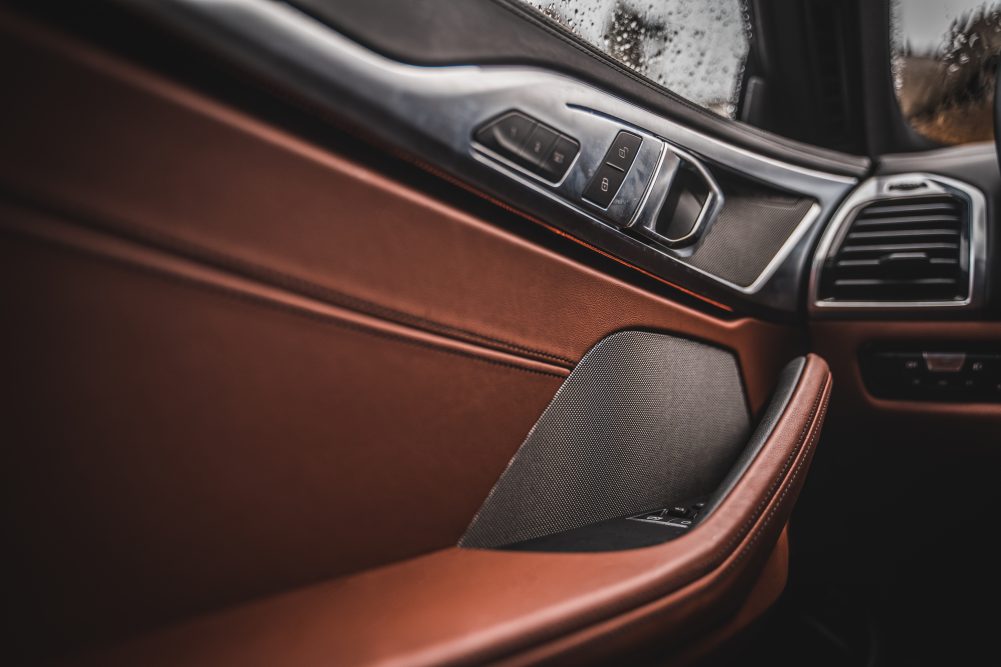 Refinement is mind blowing here, with its big V8 delivering most of if its twist down under 2,500 rpm, returning no more than a 9.2L/100 km consumption average when feathering the throttle, transmission smoothly shuffling from one gear to next in absolute secrecy. 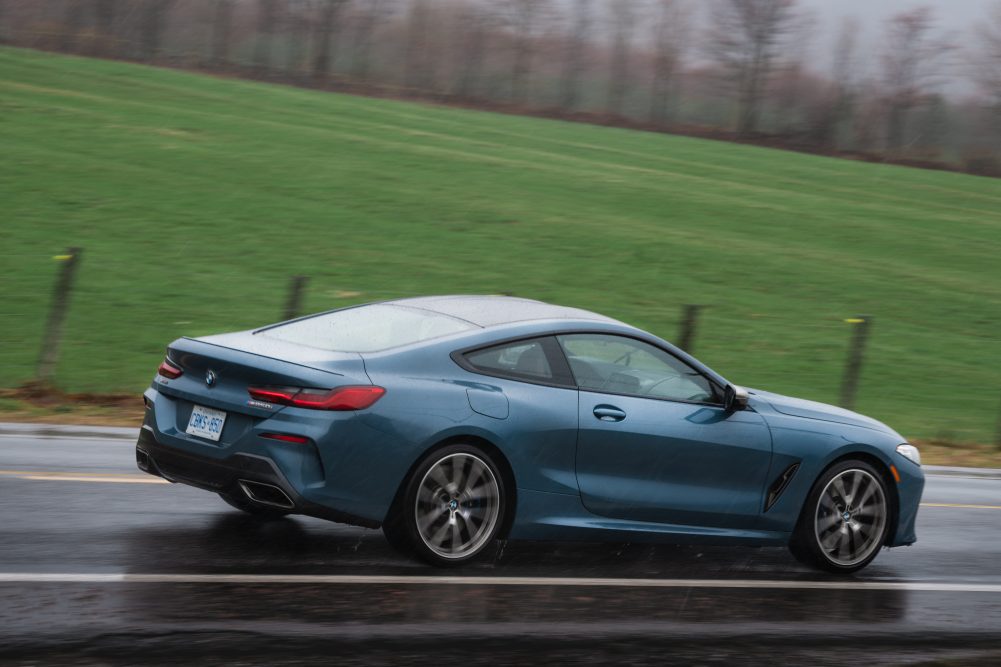 Tap the Sport button twice next to the glass shifter to activate Sport +, and the transmission downshifts to lower gears, the steering wheel hardens, the suspension firms up, and the exhaust note bellows throughout the transmission tunnel. Accelerations are brutal in an 8-Series, shoving you into your seat as you cover ground at near aviation speeds, V8 engine singing smoothly to its rev-limiter. As you grab another gear through the steering-wheel mounted paddle shifter, a loud thump is felt in the exhaust. It’s a sign the car is ready to repeat the experience all over again. 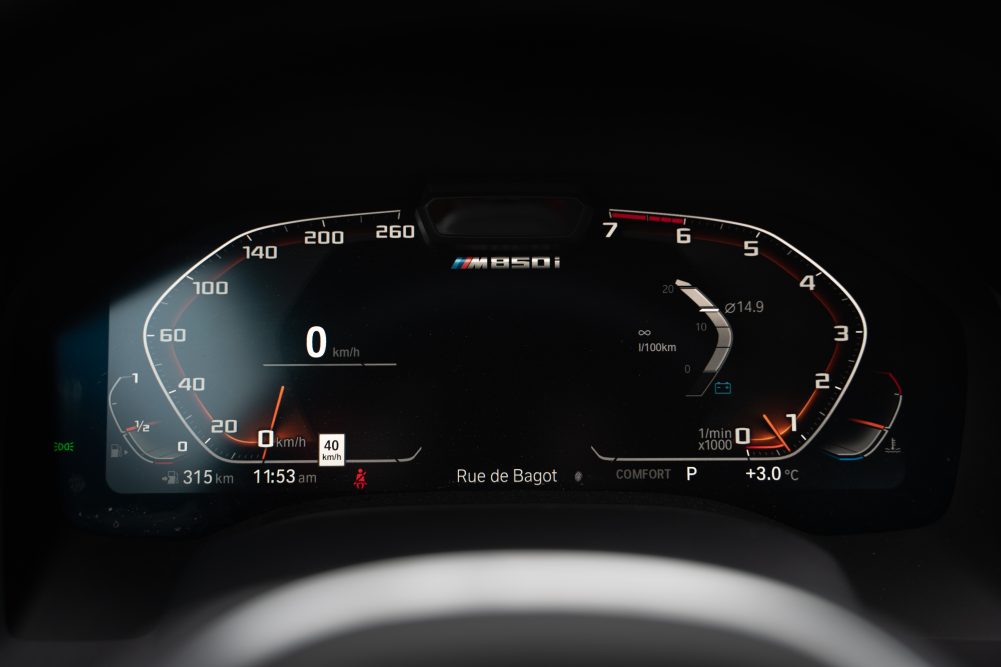 You’re now way past the legal speed limit, yet the car isn’t flinching one bit. You’re confident you can bring this luxury barge up to 300 km/h. Suddenly, you feel invincible. That no police interceptor can even come close to you. This car can put you in serious trouble fast.

As a luxo barge capable of carrying two adults in utmost serenity at extreme high speeds, the M850i succeeds tremendously. Tired of having that Porsche 911 gnawing at your rear bumper? Just stomp the accelerator pedal and see him vanish in your rear-view mirror as you bathe in the exquisite decibels of a finely tuned Harman Kardon premium sound system, filtered cool air blowing on your valuable skin. 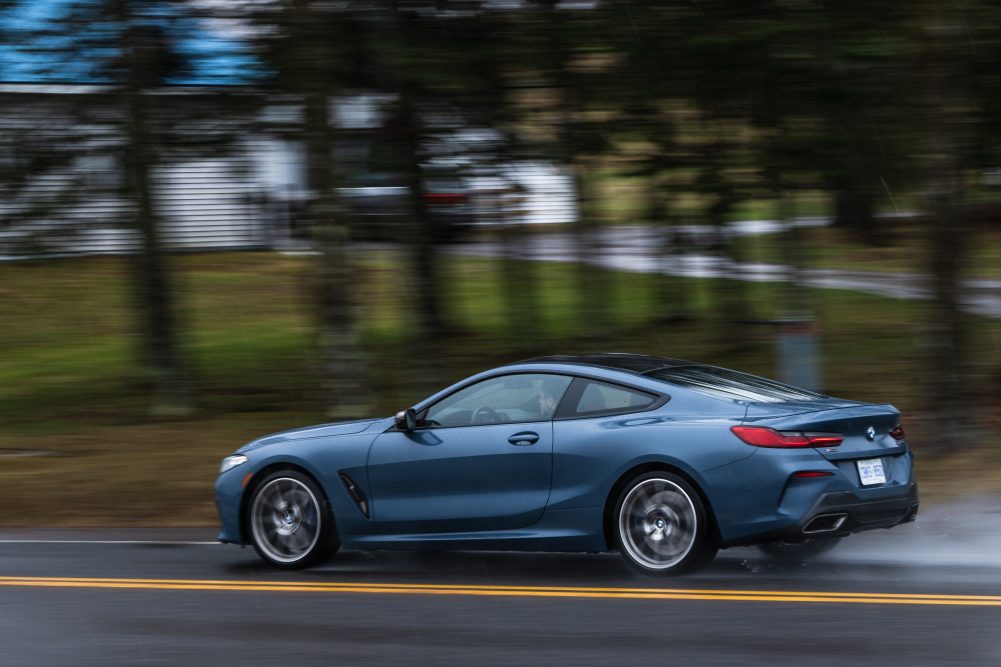 Its rear seat is useless, and just like all modern BMW’s, its headlight control panel put there to replace the conventional stalk is an irritating mess. But while the 2019 BMW M850i falls a bit short at feeling as exquisite as other premium grand tourers out there, it sells for just under $130,000, making it a bargain compared to its direct rivals. It may fail at being two cars at once, but this BMW executes personal luxury like no other car.