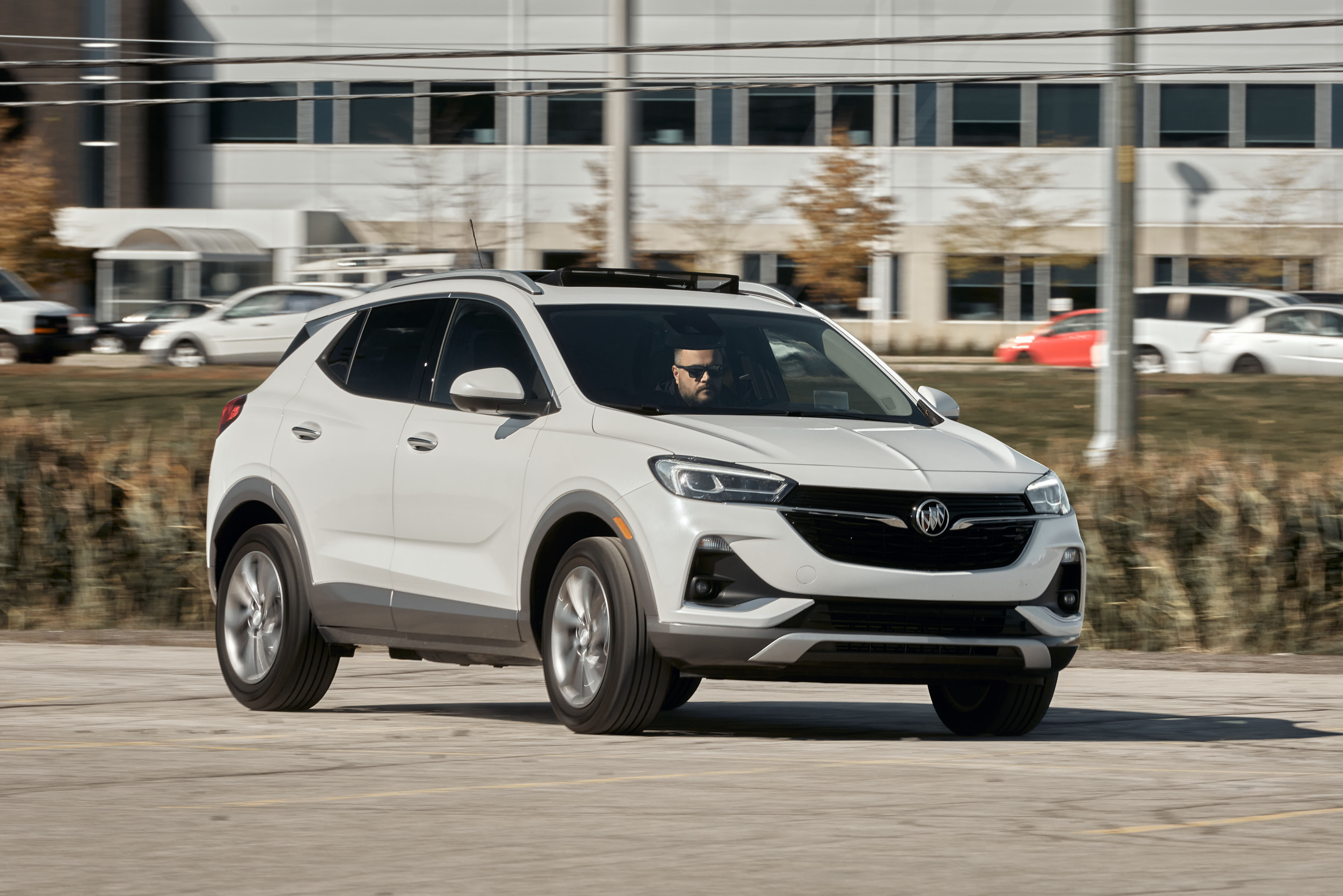 The 2021 Buick Encore GX is essentially a luxed up Chevrolet Trailblazer. It’s also Buick’s desperate attempt to remain alive in our market. The thing is though, the segment it sits in is crowded with much more compelling European and Japanese alternatives. But if you compare this Encore GX to mainstream alternatives, it actually starts making a lot of sense. 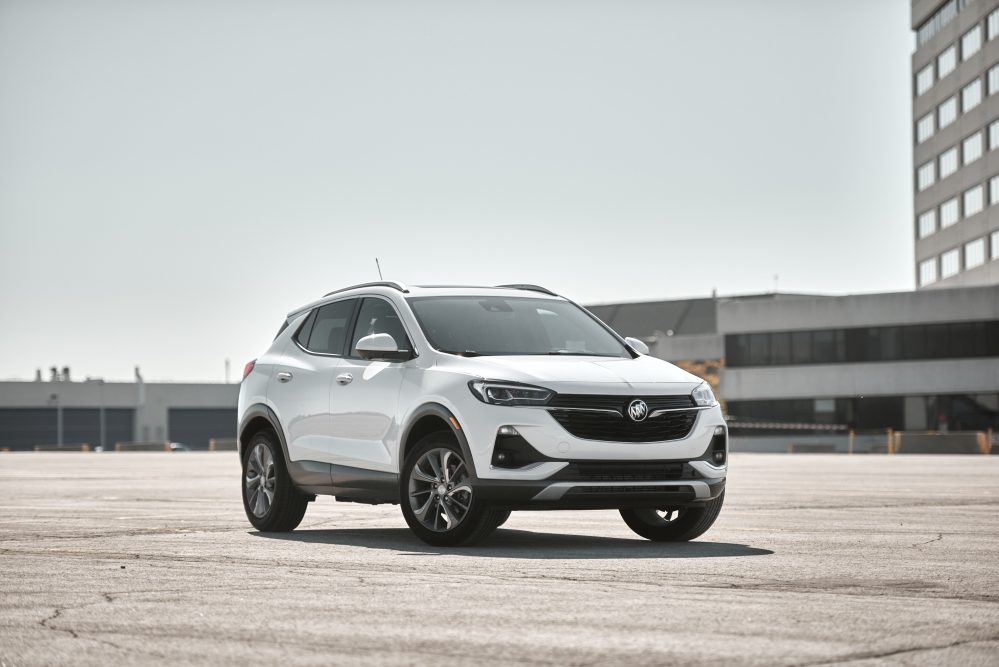 So no, the 2021 Buick Encore GX doesn’t measure up to an Audi Q3, BMW X1/X2, Mercedes-Benz GLA or even GM’s own Cadillac XT4 in terms of luxury, but it is sold at a much more affordable price point. I reckon this is more of a direct rival to the recent crop of cute-utes from mainstream brands like the Mazda CX-30 or Kia Seltos. And, perhaps ironically, it’s an even better value than the Chevrolet it’s based on. 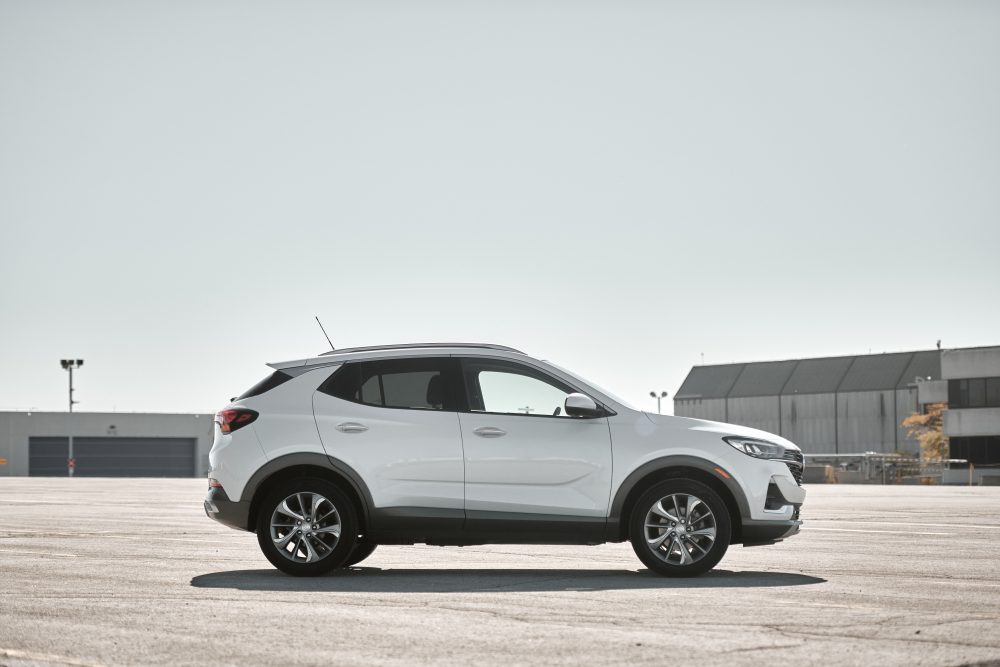 Whatever Buick’s strategy is with this thing, it seems to be working. The last generation Encore sold quite well, with about 110,000 units sold in the US and Canada combined. This Encore GX, which isn’t a replacement, but an extension of the original Encore lineup, has already shipped 50,000 North American units. Given 2020 was its first year of production and, well, a global pandemic happened, that’s pretty good. 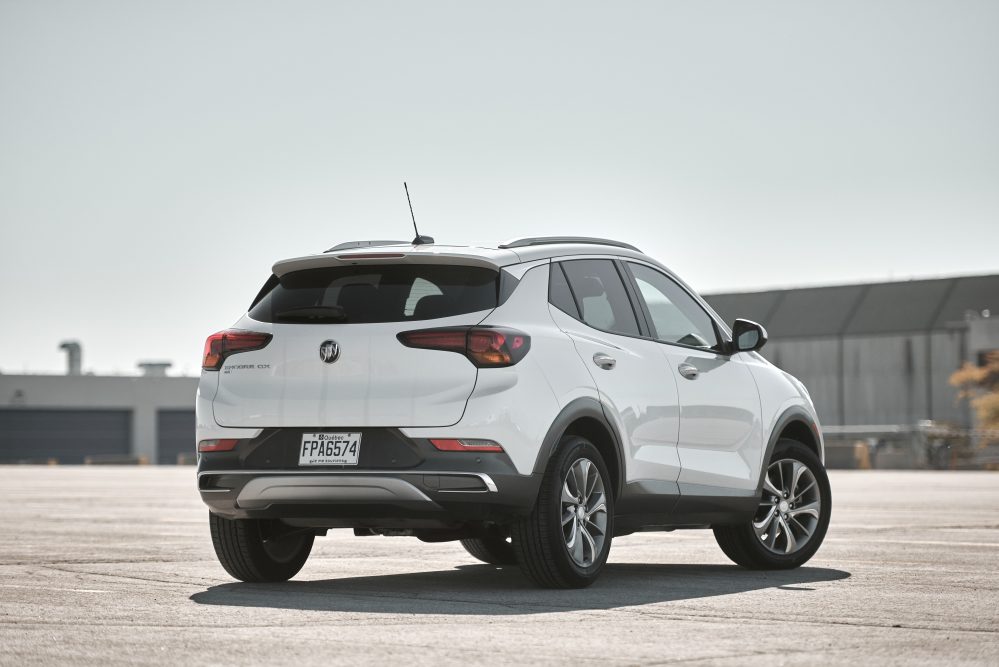 When I say the Encore GX is an extension of the Encore lineup, I mean that like the Trailblazer, it fits in a new in-betweener segment of crossovers that sit somehwhere between subcompact and compact dimensions. The Encore GX therefore slots over the puny little Encore, but underneath an Envision within the Buick lineup. 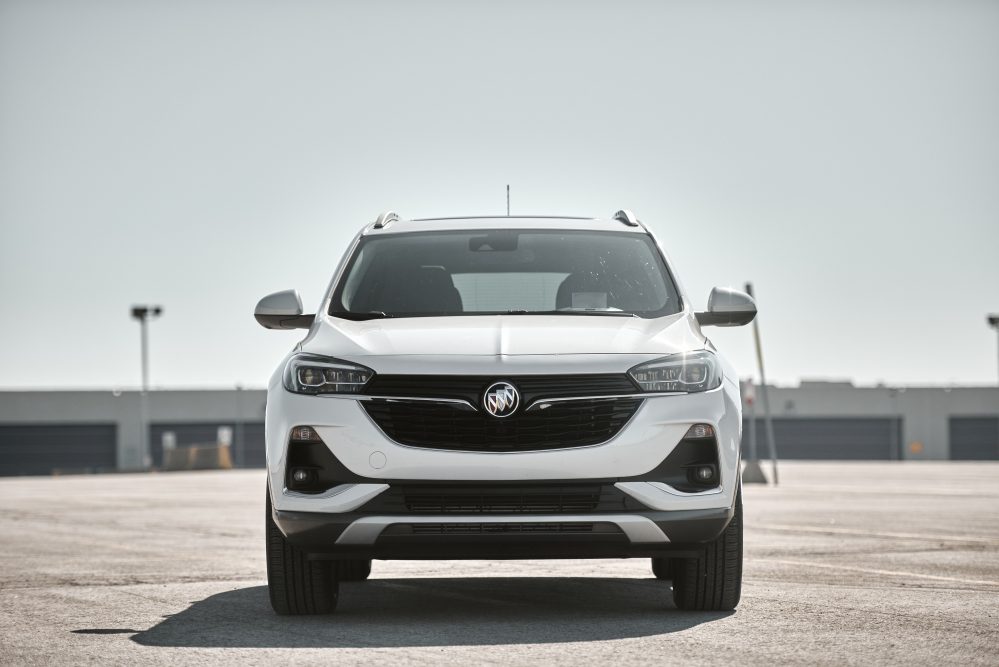 This therefore rides on the same platform, and offers the same drivetrain options as a Chevrolet Trailblazer, meaning the base engine is a 1.2-liter unit good for 137 horsepower and 162 lb-ft of torque. This engine can only be mated to a continuously variable transmission (CVT) and front-wheel drive. 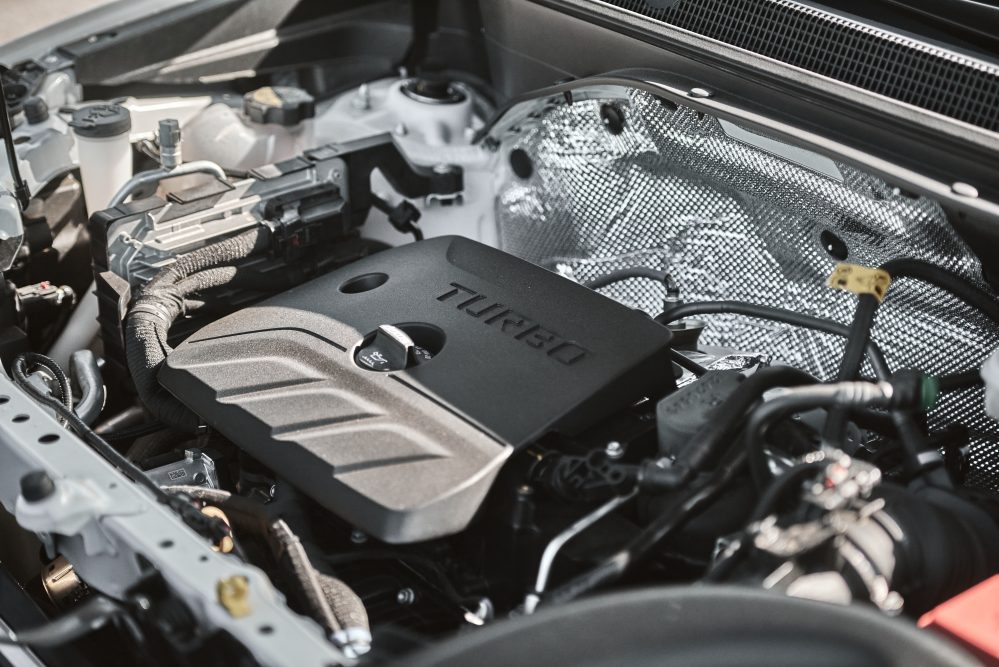 Once you tick off the all-wheel-drive option, engine displacement is bumped to 1.3 liter, with horsepower climbing to 155 and torque set at 174 lb-ft. That engine is also paired to a much more interesting nine-speed automatic transmission. 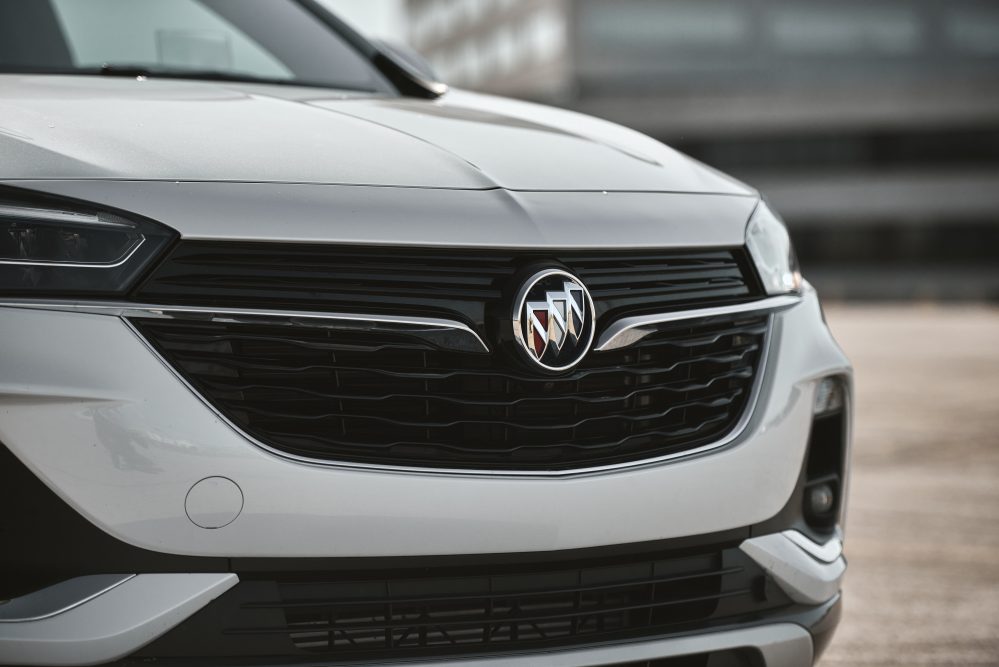 Now, when I say it’s a better value than a Trailblazer, I refer to what you’re getting for the price. Strangely, the Encore GX kicks off at an almost identical 26 098 $ base price as its Chevy twin. The one I’m driving is the top-shelf Encore GX Essence, which stickers for $34,748, or about $2,000 more than a top-spec Trailblazer. However, you are getting a considerably more upscale vehicle with the Buick. Final price for the model you see here was $37,683 due to all the added packages. 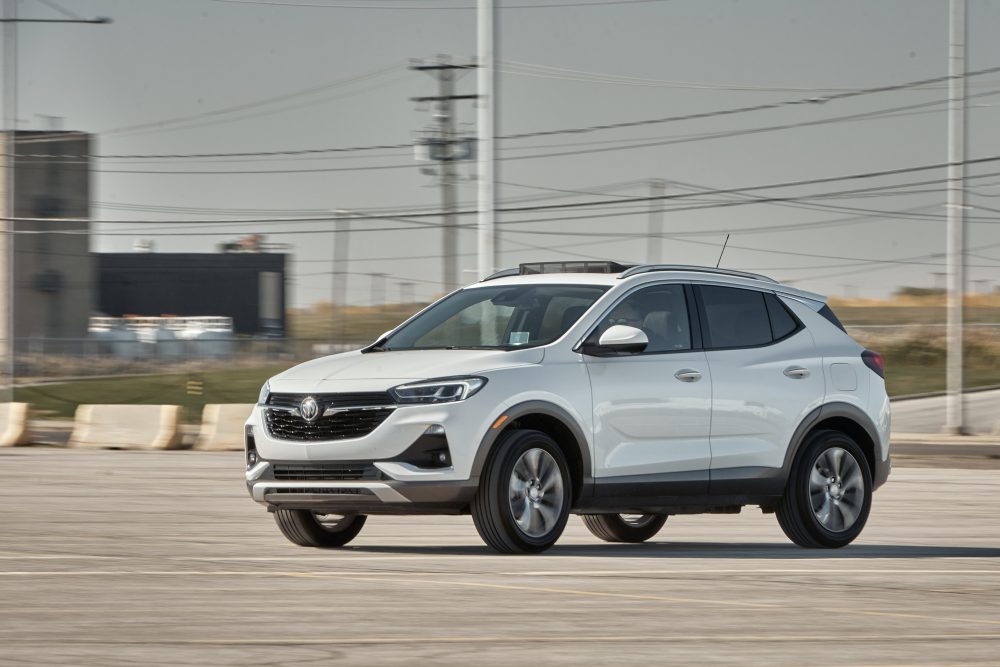 Obviously, because the 2021 Buick Encore GX rides on the same platform as a Trailblazer, its driving dynamics are rather similar, and that’s a good thing, because this platform has a nimble, spirited feet to it that allows the Encore GX to be rather enjoyable to flog around on a highway offramp. However, don’t expect anything thrilling or as engaging as a Mazda CX-30 or even a Seltos. The Encore GX gets the job done and that’s about it. But it is smooth, refined and feels of good quality, so it at least has that going for it. 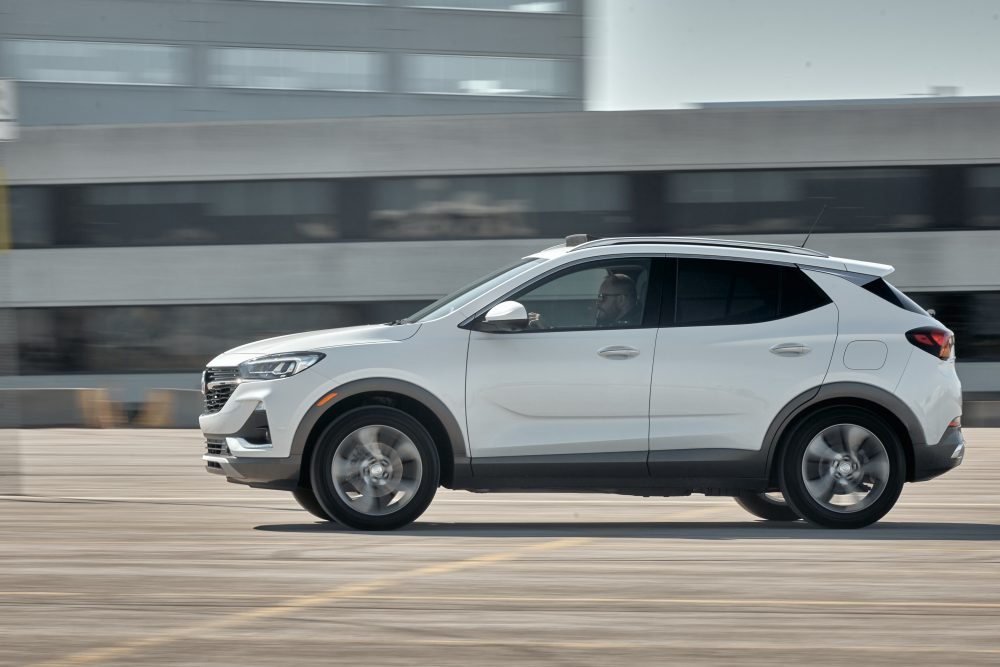 That said, it’s never as solid as a German alternative, but it’s not the same price either. I really see this as a direct rival to a Mazda CX-30 in terms of driving dynamics and overall interior presentation. Unfortunately the three-cylinder powerplant remains just as disappointing as its Chevrolet cousin. I mean, it has ample low end torque, and the nine-speed gearbox does a bang up job of exploiting the torque-filled powerband, making the Encore GX pick up and go no sweat, but it’s never fast nor fun. 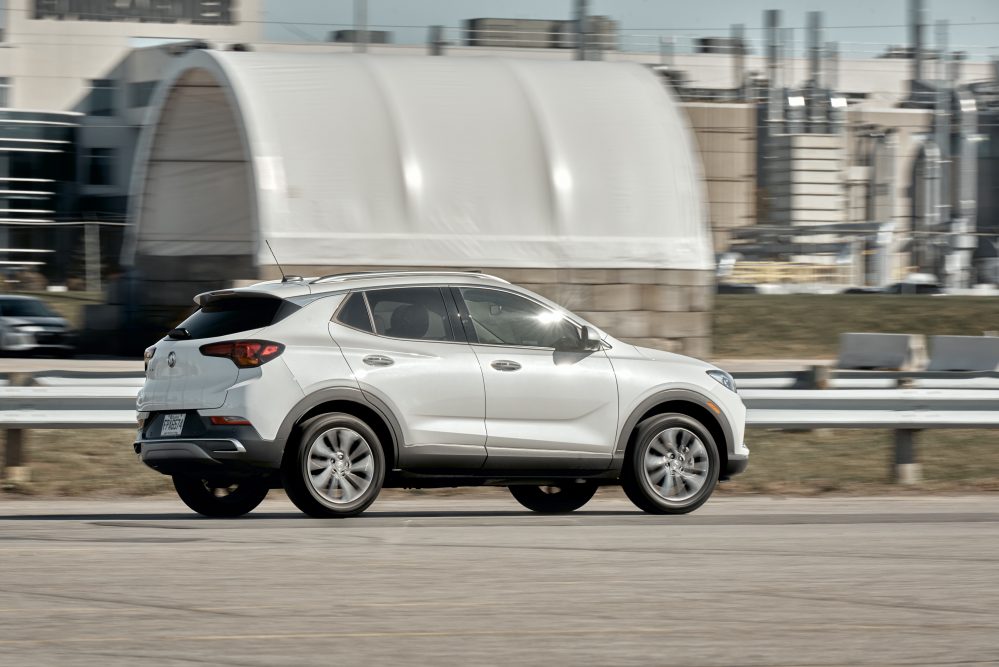 Also, since this is a premium vehicle, it would have been interesting to see Buick stuff a more powerful engine option under this tiny hood, something like a turbocharged four-cylinder instead of three. The other frustrating part with that three-pot is that it isn’t necessarily frugal. The Encore GX will return average consumption numbers that hang in the low 8L/100 km mark, but that’s only fine in this segment. 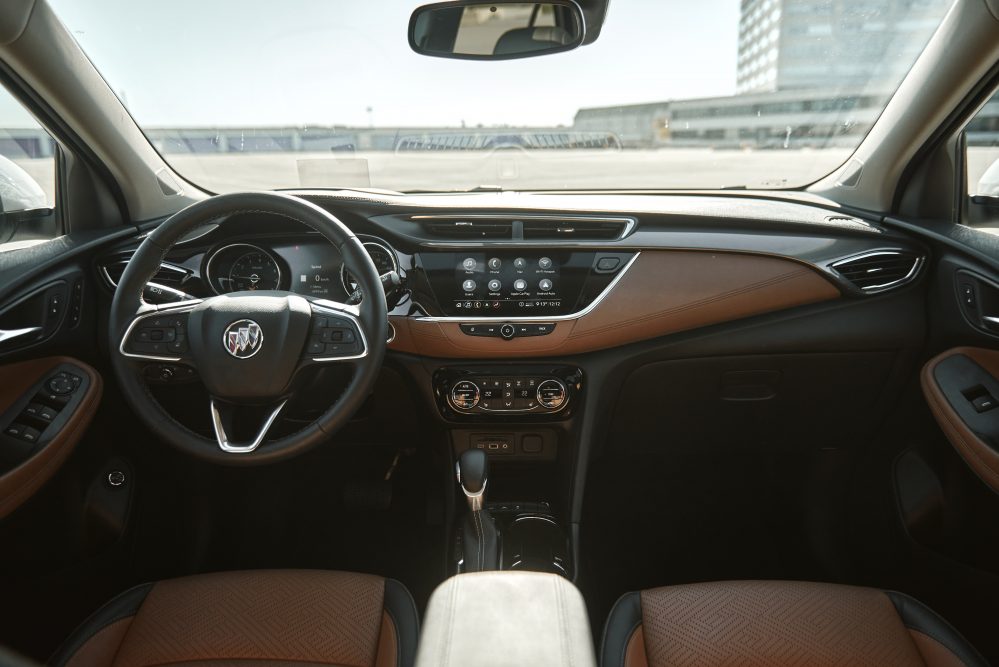 But I got to say, the interior in this little Buick is rather dashing, especially that my tester had the Signet interior color with Ebony accents and leather appointed seats, which allowed the cabin to pop even more. Build quality is above average, and in typical GM fashion, ergonomics are spot on, with ever control easily accessible and an downright class-leading infotainment interface that’s filled with “welcome to 2021” technology. 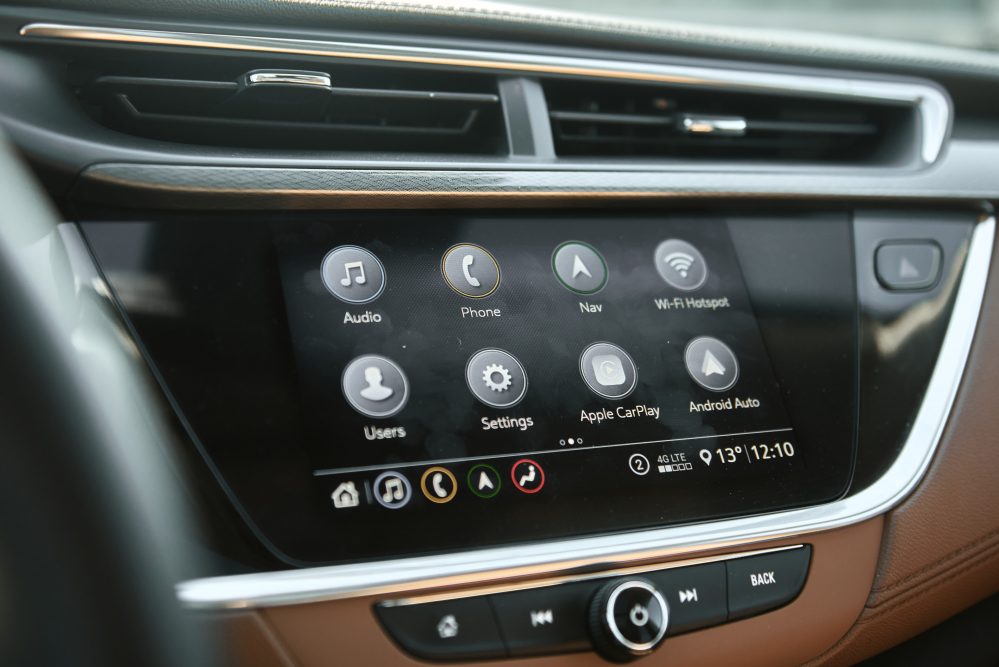 There are, however, some flimsy plastic components that shouldn’t be found in a vehicle with premium intentions; hard plastics even Kia no longer puts in its cars. And while that cabin is functional, a lot of it still looks and feels like a posh Chevrolet. It just doesn’t feel special in there. Although it is a comfortable cabin, one that has no issue carrying four tall adults. The rear seats offer a decent amount of leg and headroom, impressive given how small this vehicle is. 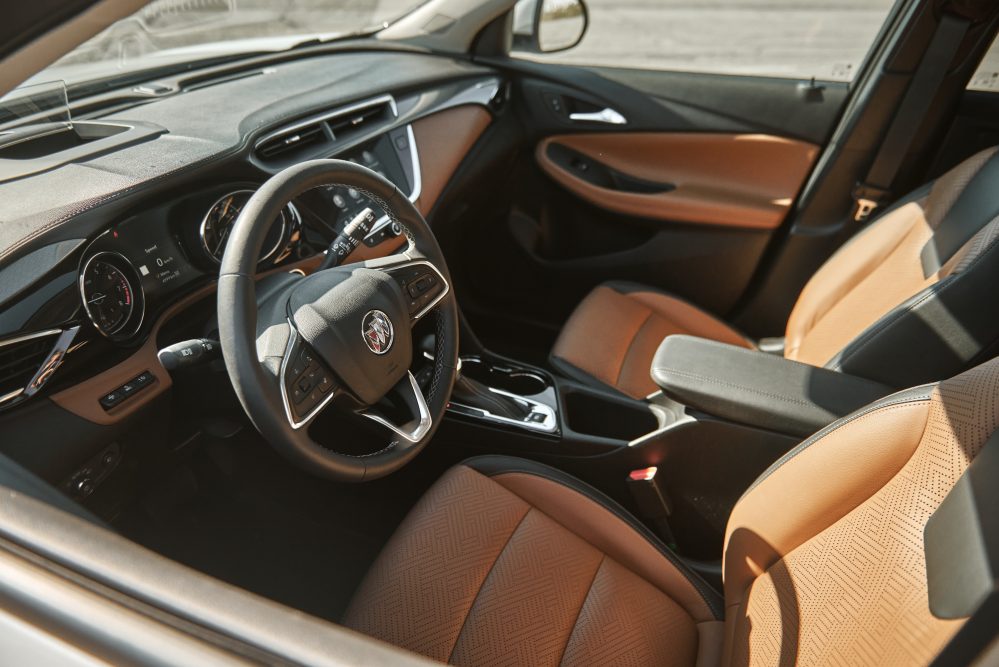 Strangely, the Encore GX’s total cargo space is a tad smaller than the Trailblazer it’s based on. Once the rear seats are folded flat, it’ll give way to 1,421 liters in total, compared to 1,542 liters for the Chevrolet. At least, the Encore GX is still more practical than a Mazda CX-30 (1,280 liters), but is quickly dwarfed by a Kia Seltos (1,778 liters). Premium subcompact SUV shoppers will nevertheless be happy to know that an Encore GX bests an Audi Q3 (1,359 liters) and comes about equal to a Mercedes-Benz GLA (1,430 liters) in cargo capacity. 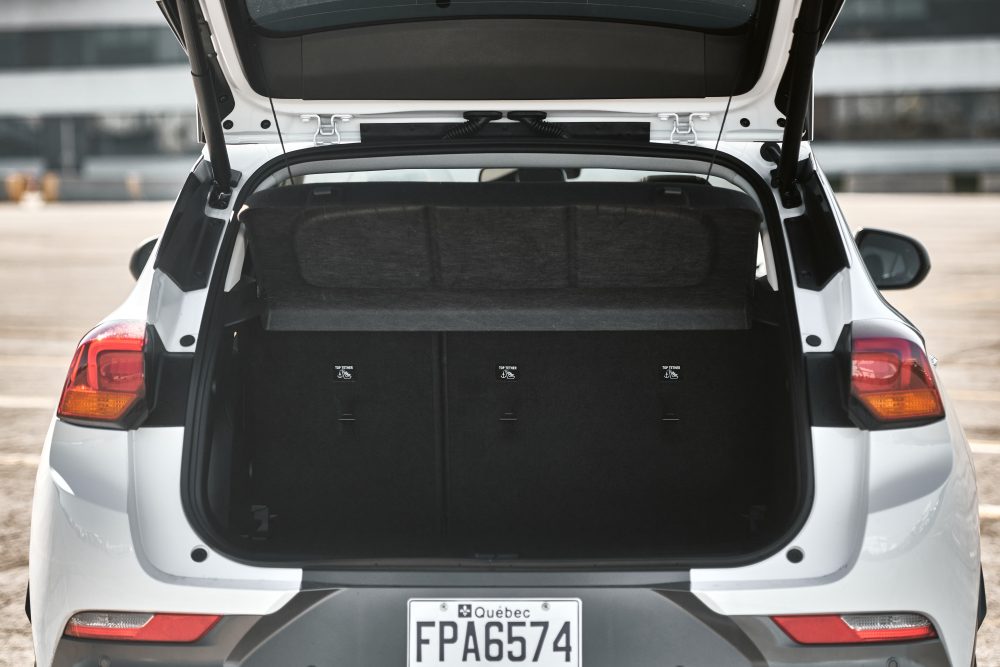 At this point if you’re probably wondering who would buy a 2021 Buick Encore GX versus a German, Japanese or even Korean alternative. I’m here to tell you it’s really the value proposition here that allows it to slot itself somewhere between a mainstream and a luxury offering. 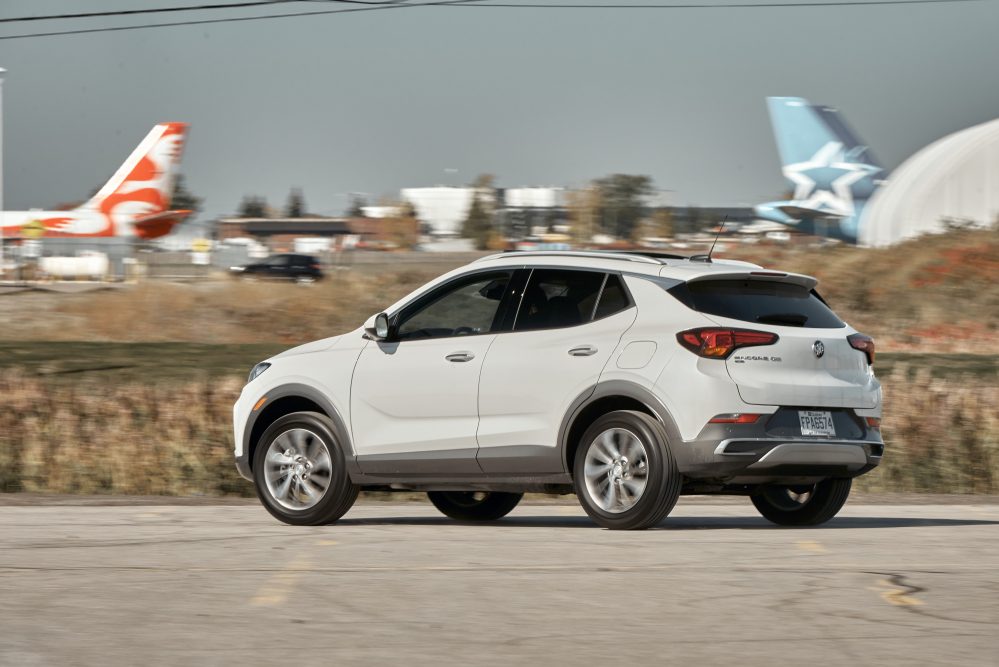 That said, Mazda is trying this strategy as well these days and seems to be doing a better job than Buick. But hey, judging from the way these things have been selling so far, GM seems to have understood something most of us haven’t.