The Chevrolet Volt is the 56K Modem of Our Era 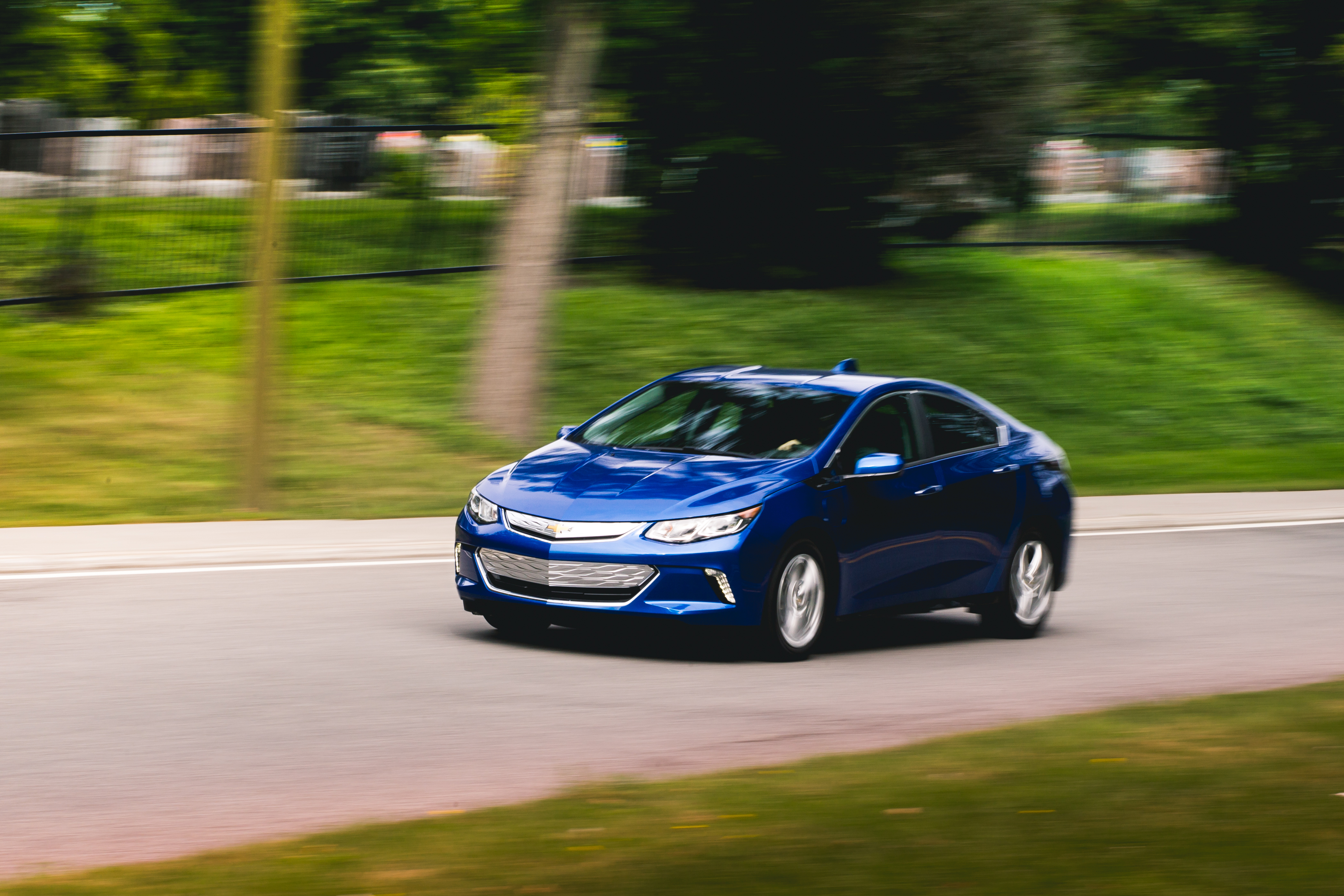 I’m sure you all remember the 56k modem. Looks awfully prehistoric now doesn’t it? 20 years ago, that little plastic box was the technology that allowed us to connect our computers to this new thing called the Internet. It would combine old technology; the landline telephone, with new technology; the personal computer, to log us inside a new digital world filled with endless possibilities – and porn. Yes, the 56k modem would interrupt our telephone lines while we surfed, and made our ears bleed while attempting to connect, but we didn’t care. Because it was the future. Even if we knew something better would eventually arrive, it paved the way for the world of tomorrow.

The Chevrolet Volt is very much like the 56K modem. Like when the Internet first appeared 20 years ago, we currently live in a world of transition. Our old world is a fossil fuel addicted one, where we’ve become used to abundance and quick-refuelling, no compromise transportation. Our new world is one filled with carbon monoxide, extreme climate change, and electric cars that take hours to charge. For the moment, we need a vehicle that can bridge the gap between these two worlds. The Volt is that bridge. 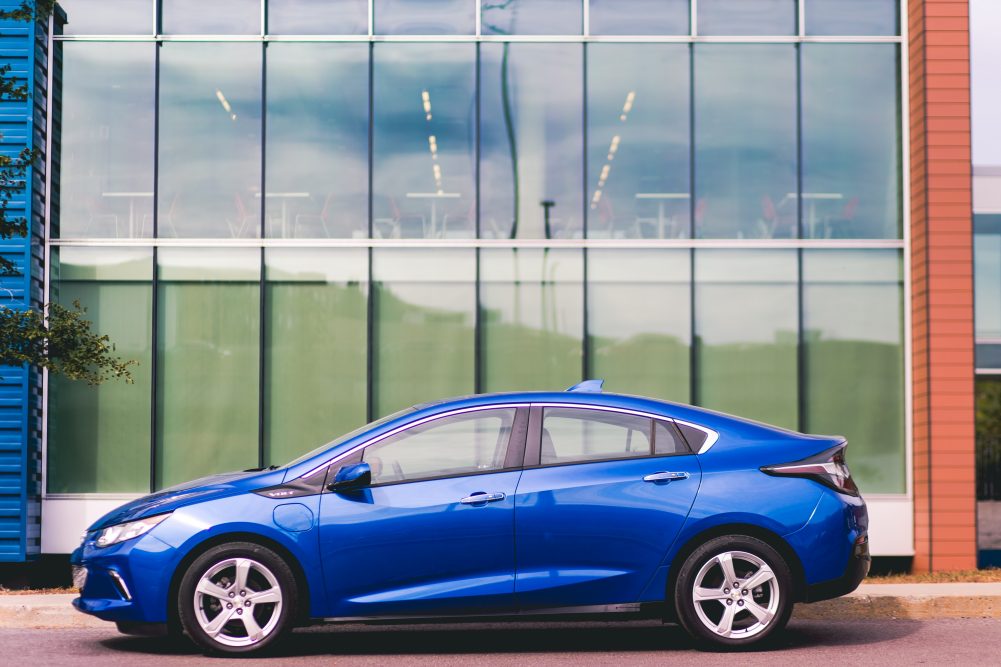 This is the second-generation Chevrolet Volt, or proof that General Motors is taking the electric car business very seriously. Updated for 2016, the Volt is now a lot more mainstream in design, looking much more like a regular compact sedan, unlike its predecessor, which looked like something out of a 90’s motion picture about the future. Remember the movie Demolition Man? That’s what the first generation Chevrolet Volt reminded me of. 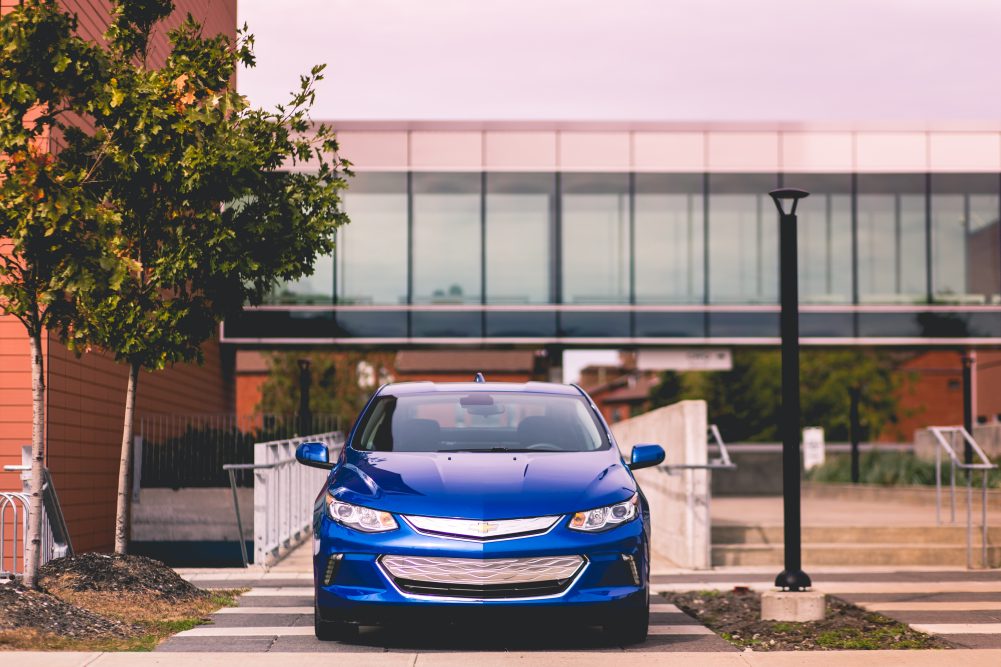 I have to admit, I was a huge fan of the original car’s “the future is now” styling, because it looked so different. Whereas now, I’m not exactly sure what to think of it. From the profile view, it looks very modern and sporty, and has Honda Civic and Toyota Corolla hints in its overall shape. But then there’s an array of fake chrome on the front grille, which mostly looks like aluminum foil and makes the Volt look more like it’s trying too hard rather than present itself as a genuinely unique product. The rear of the car is also a lot less coherent than before, with now larger taillights that seem to have exploded, and then leaked their goo onto both sides of the car. There’s also a massive blacked-out plastic bumper covered with unnecessary creases that simply makes the car look and feel flimsy.

Still, it’s a much cleaner attempt than the current Toyota Prius. 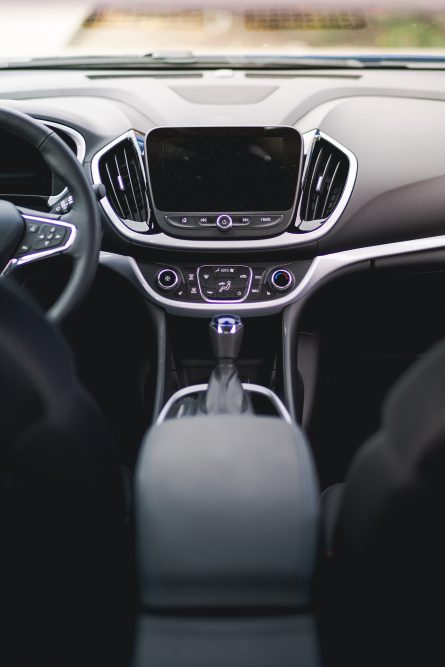 Inside, the new Volt’s design has also been redone, but unlike the exterior, it makes a lot more sense. The overall layout is now more in tune with the rest of Chevrolet’s lineup, and like the Malibu I drove a few weeks ago, there are good quality materials and above-average fit and finish all around. Also, most of the car’s controls can be operated via the wonderfully intuitive tablet-like infotainment system that sticks out from the centre of the dashboard. This is a much more mainstream interior than its predecessor’s, but then, it’s not like the Chevrolet Volt is anything new and innovative anymore. When released, the idea of an electric car with a “range extender” felt like something from a different world. Now, the term “plug-in hybrid” has become rather common lingo, one which can now be grafted even to a Honda Accord.

But it’s the Volt that started this whole segment. 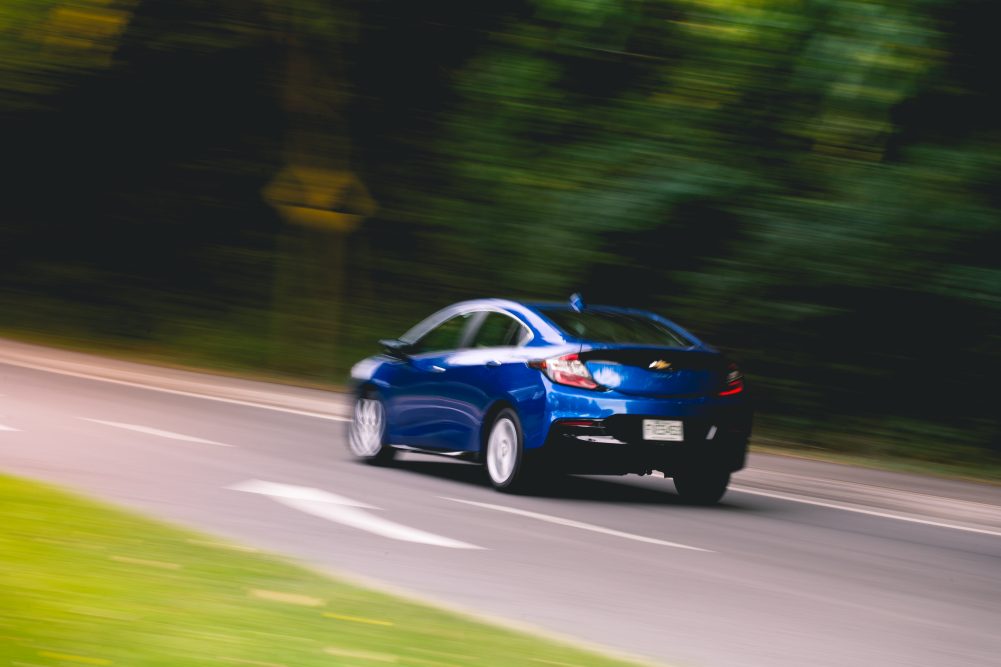 It is, but then it’s not. The Volt is indeed powered by not one, but two (wait for it) permanent-magnet synchronous AC electric motors which are good for a total power output of 149 hp and 294 lb-ft of torque. They get their go juice from a 18.4 kWh, T-shaped lithium-ion battery pack located in the centre of the car. But there’s more: the Volt also houses a conventional gasoline engine; a 1.5-liter, Atkinson-cycle 4-cylinder good for 101 hp and 103 lb-ft of torque.

So yes, this is a hybrid. 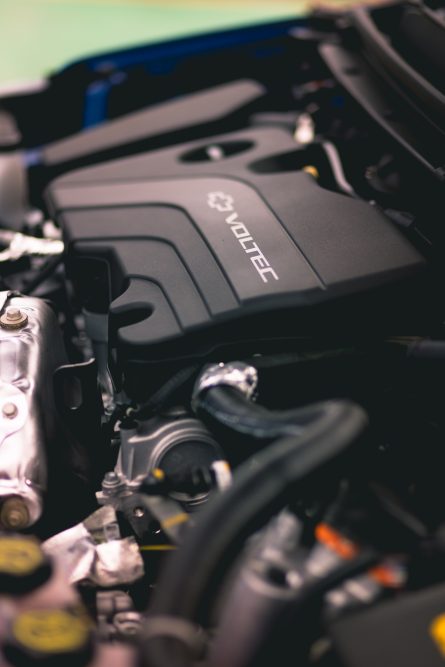 But unlike the Prius I drove earlier this summer, which constantly relies on both powertrains to move around, the Volt’s driver can actually decide between electric or gasoline propulsion alone. Or both. Plug your Volt into a public charging station for about 4 hours, and you’re good for roughly 80 km of pure electric driving. As long as the batteries are filled up, you’ll never consume a drop of petrol.

Now this where the Volt becomes interesting. Unlike conventional EV’s, which are limited to the range of their batteries, the Volt can always fall back to traditional gasoline propulsion. So if you happen to go on a road trip with it and those batteries run out of juice, the car becomes a gas/electric hybrid – very much like a Prius. Unlike the Prius though, you can actually drive over 35 km/h in full electric mode for longer distances in the Volt. 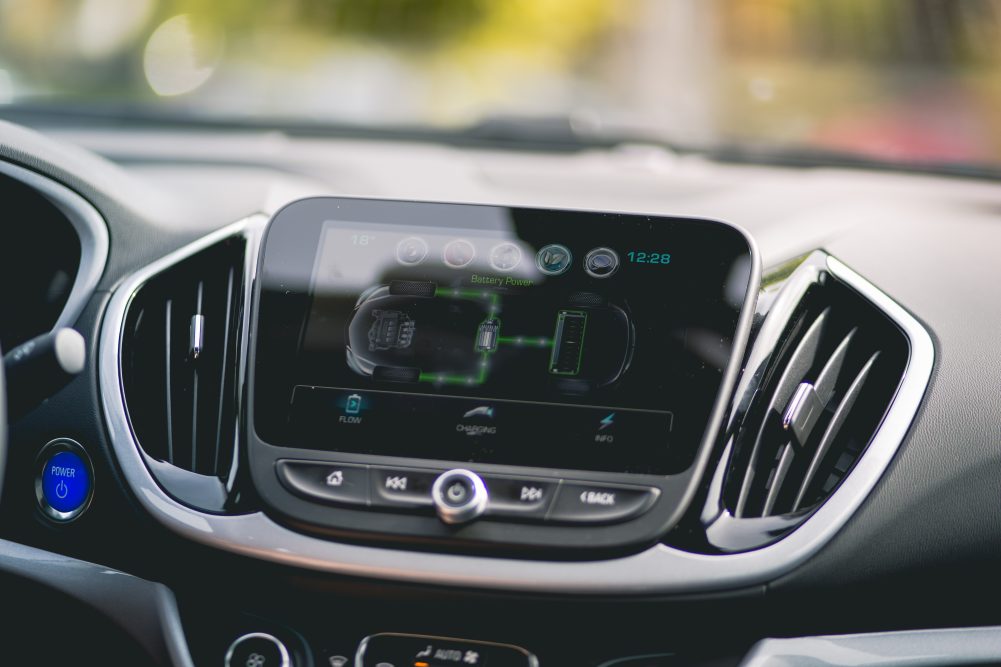 It’s a clever setup, one which gives drivers plenty of flexibility and everyday usability. During the week I had my Volt, I allowed myself to test all modes in depth to see if it could actually fit my lifestyle. In hybrid mode, I achieved a remarkable 4.5 L/100 km average, and while I had no problem finding and connecting to public charging stations, home charging proved itself to be a bit more of a hassle. The problem is, if your home isn’t fitted with a 240-volt source, it’ll take you a whopping 13 hours to charge your Volt!

Luckily, it only costs $26 dollars to fill it up with gas, and about 2 minutes.

Practical and Fun to Drive 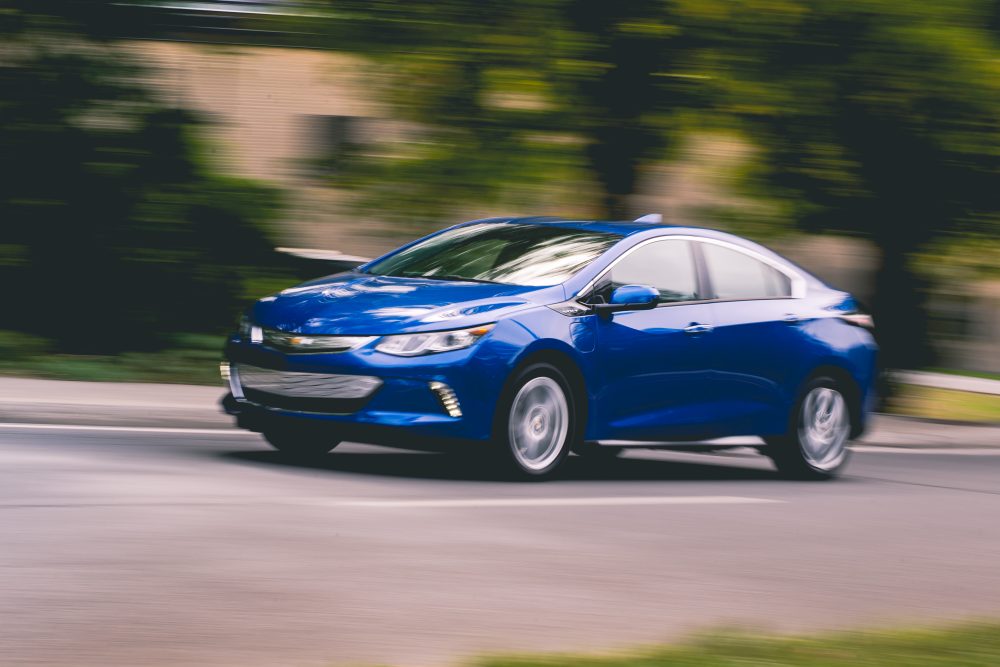 To my pleasant surprise, the 2017 Chevrolet Volt was actually quite a lot of fun to drive, and far from being a boring appliance on wheels. There are several drive modes to choose from: Normal, Sport, Mountain, and Hold.  Sport is more of a gimmick, and simply sharpens up throttle response without doing anything more than Normal. Mountain keeps battery charge in reserve to help the engine climb steep grades, and the fourth mode, Hold, saves whatever battery life is left for later use. 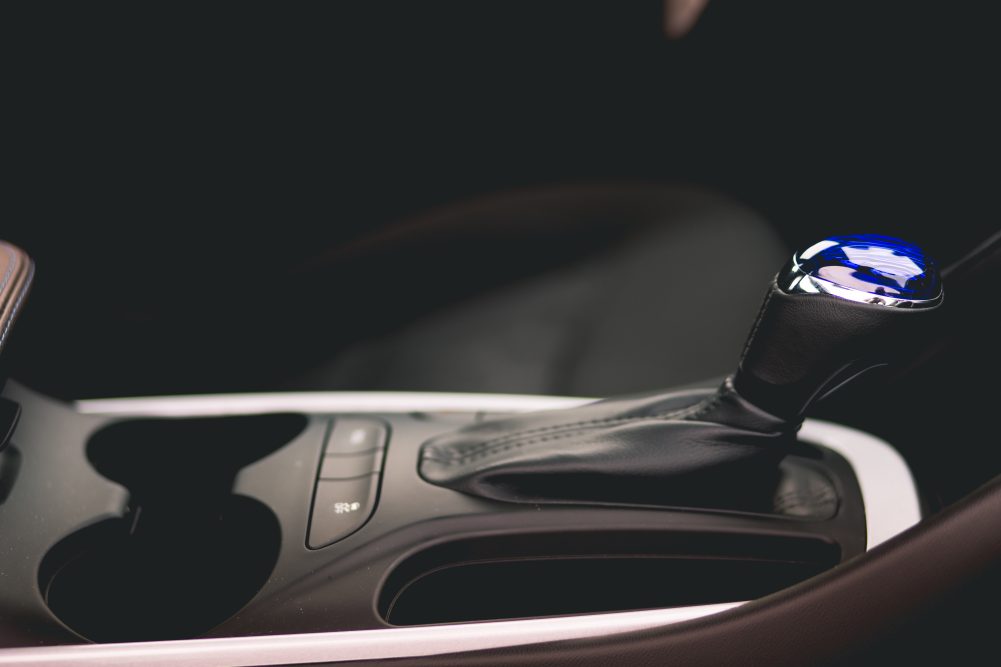 Drop the Volt’s gear lever to L, and more battery regeneration can be generated by releasing the throttle. Very much like the Tesla Model S I reviewed in July, you can almost drive the entire car without even touching the brake pedal. And if you happen to desire even more regen, simply tap a paddle located behind the left steering-wheel spoke, and the car will literally brake to a full stop on the electric motor’s resistance alone. It’s clever, smart, and very effective. 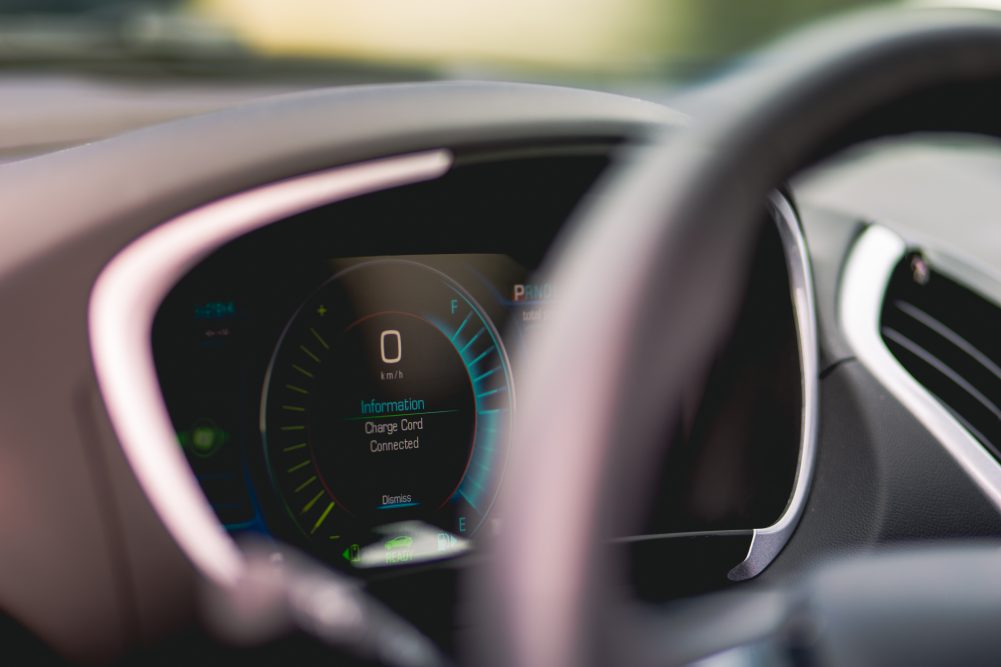 The Volt is also remarkably practical due to its hatchback design. Fold those rear seats down, and it will engulf a fully assembled bicycle. Unfortunately the same can’t be said about the rear seats, which offer very limited headroom due to the shape of the car. And with that battery pack located between the seats, legroom is compromised for that middle passenger, resulting in a 4-door sedan that can only seat 4 people. 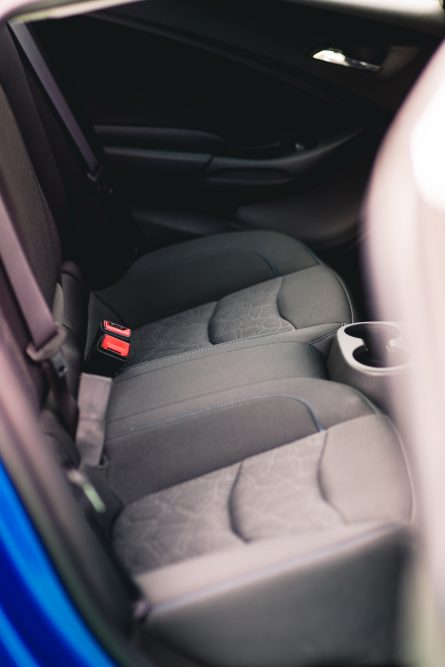 Handling is good, nice and composed. This is a decent car to drive around.Steering is properly weighted, tight on centre, and the car enjoys hunting down apexes.  Overall the ride is compliant and quiet, wind noise is kept low, and the transition between gas and electric propulsion is nearly seamless. Rear visibility is, however, compromised due to the car’s high beltline, and the mirrors seem too small for the car, resulting in blind spots that are very difficult to manage, making the Volt often hard to drive in heavy traffic.

This Over a Bimmer? 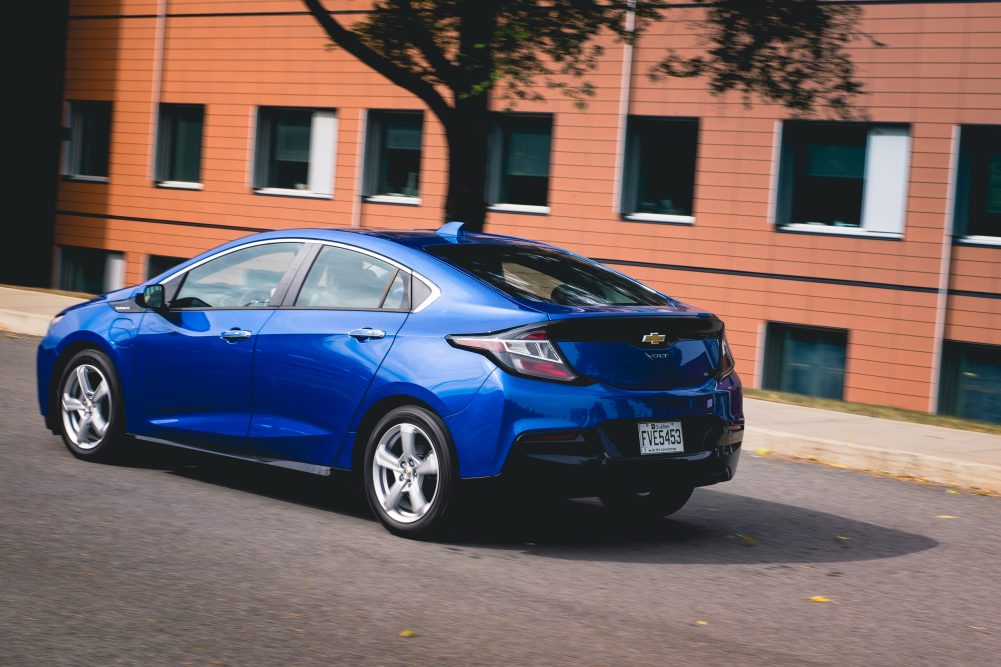 So, how much for this portal to our future on wheels? The honest answer is: not cheap. The base model, the LT, such as my tester, comes at an entry price of $40 340. To my surprise, it lacked basic convenience features now found in much more affordable cars, such as a sunroof, blind spot monitoring, and adaptive cruise control. To get such options, one must opt for the Volt Premier. That one sells for $44 440 – basically BMW 3-series territory. 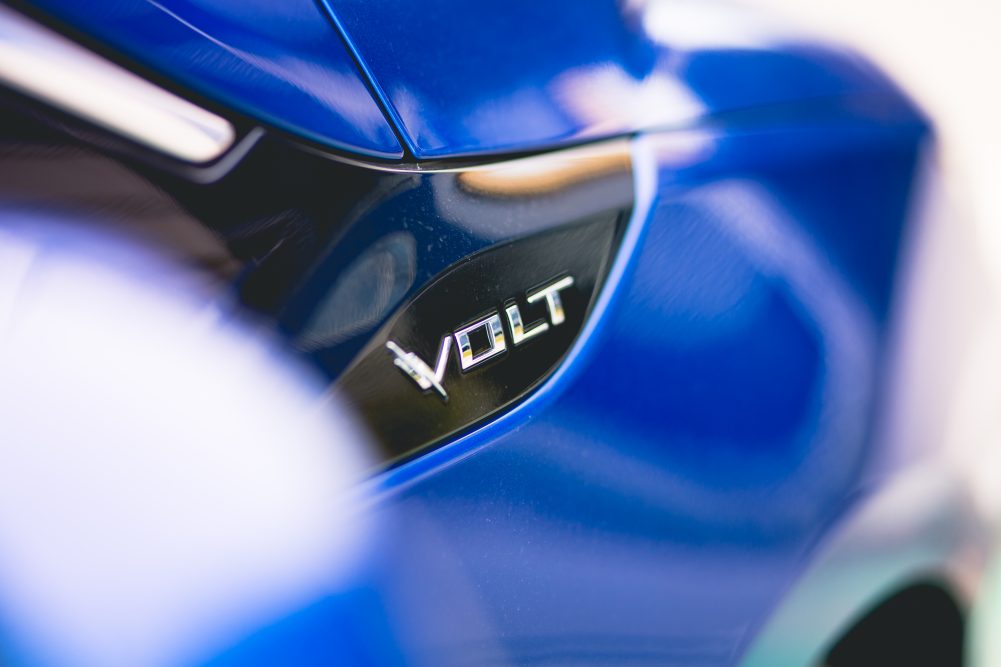 But. Since the Volt has one of the largest battery capacity of all plug-in hybrids, it benefits from the largest government incentive. Buy or lease a brand new Volt, and Québec’s government will give you back a total of $8000. That, and factor in the Volt’s low running costs, not just on gas savings, but on brake and mechanical maintenance, and the Volt does come out as an interesting long-term eco-friendly investment. 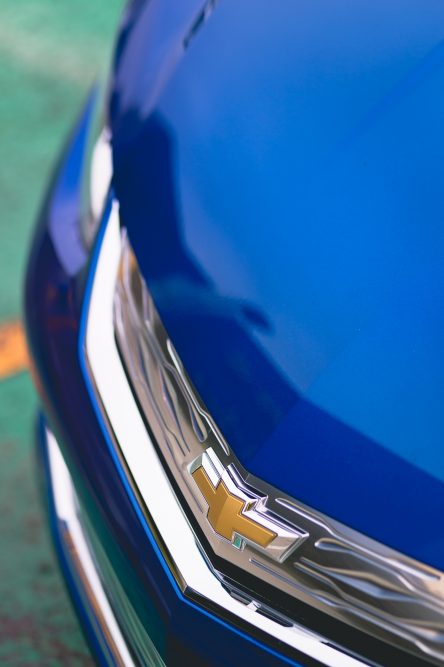 To sum it all up, the 2017 Chevrolet Volt may not be as revolutionary as a Tesla Model S, but it still moves technical frontiers forward in its own respect. Not everyone can afford a $100 000 electric car, and while the Teslas are breaking new ground in EV technology, Chevrolet is making the whole idea attainable, and easy to live with for common folks. Similar to the 56K modem, we’ll one day laugh about how prehistoric this car was, but we’ll always remember it as the car that helped transition humanity towards a new world of sustainable transportation.