2020 Ford F-250 Tremor Will Drive Through Virtually Anything 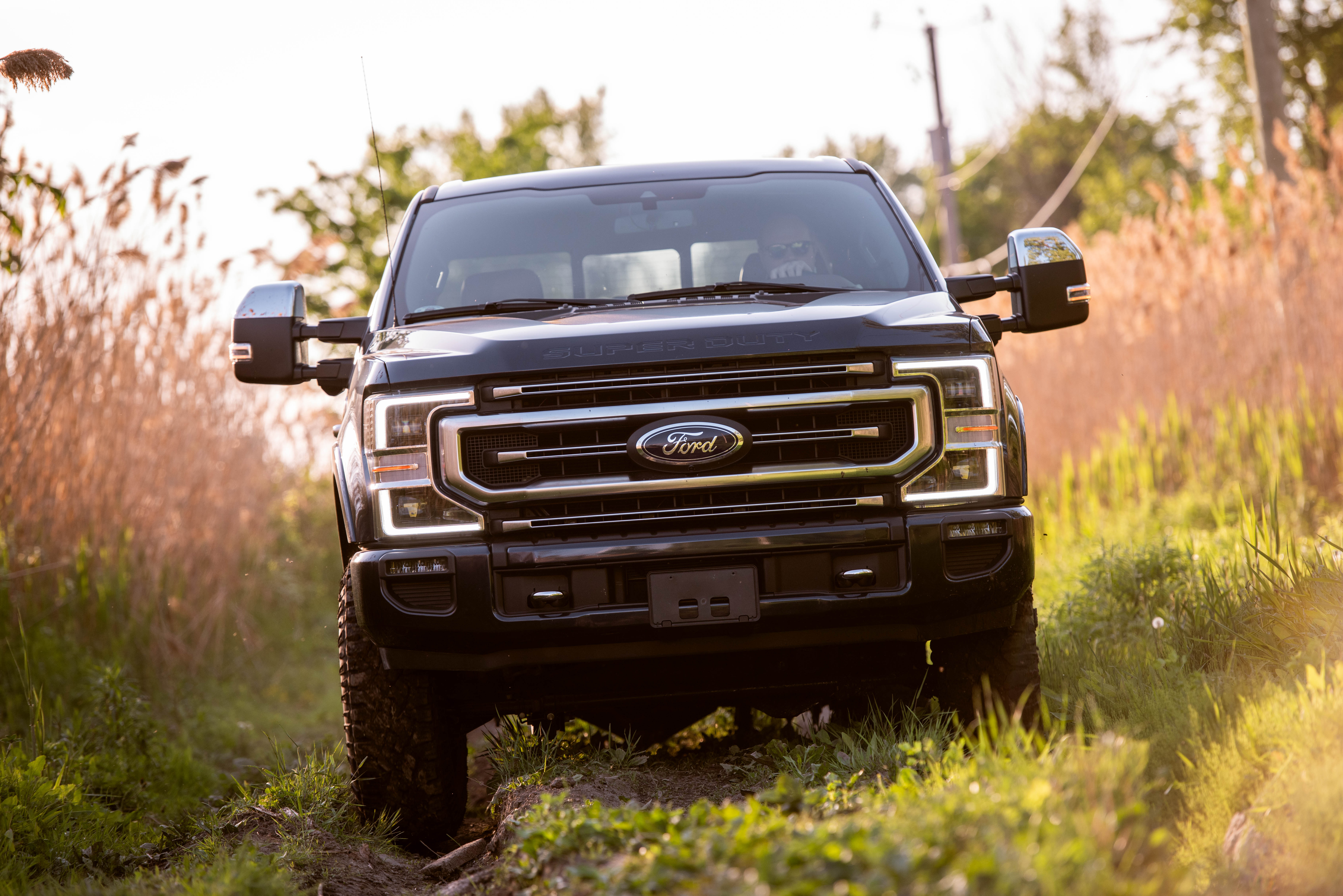 The 2020 Ford F-250 Tremor came at the perfect time in my life. After spending two months in confinement due to the COVID-19 pandemic, I needed something big, loud and ostentatious to remind me of my real purpose in the world. The truck also appeared after clocking hours upon hours playing the SnowRunner trucking simulator, which suddenly got me a lot more interested in trucks.

Perhaps the most obvious question is the following: is the Tremor another one of those marketing exercises to convince consumers to sign for a Ford instead of a GM or a Ram? Or is it the off-roading real deal? I’m here to tell you it’s a serious machine folks. As a matter of fact, this thing may be the most hardcore truck I’ve driven since the Raptor. 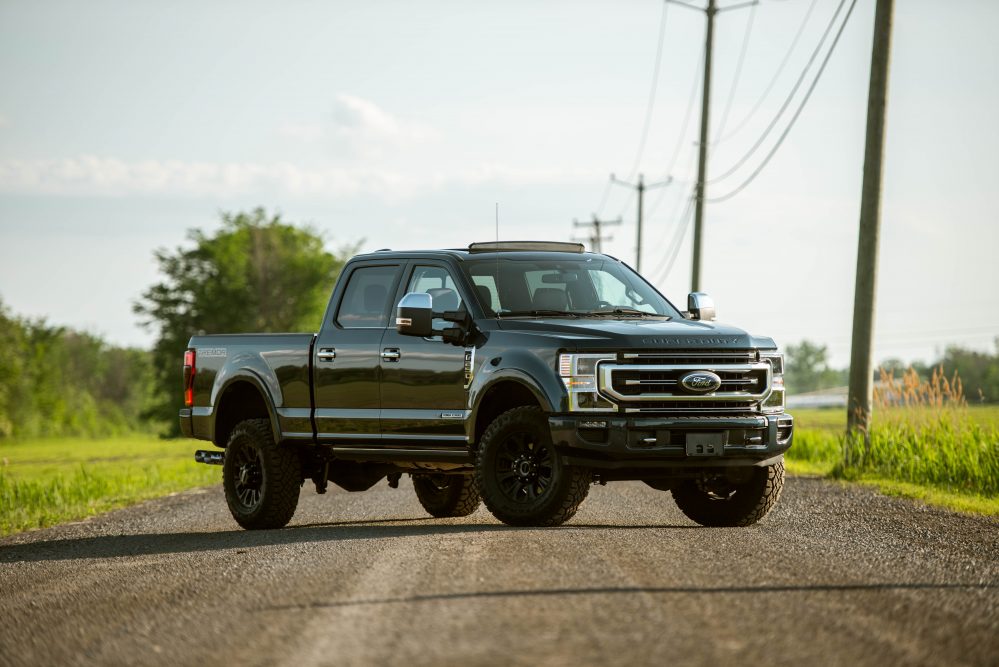 You came here for one of the following reasons: either you already know what a Tremor is and want to know if it’s worth your hard-earned money, or you’ve never heard of this thing, but were attracted by the top shot of me plowing through a beaten trail with a stock heavy duty truck. Either way, I’m here to explain to you why you should care more about this fortified beast. 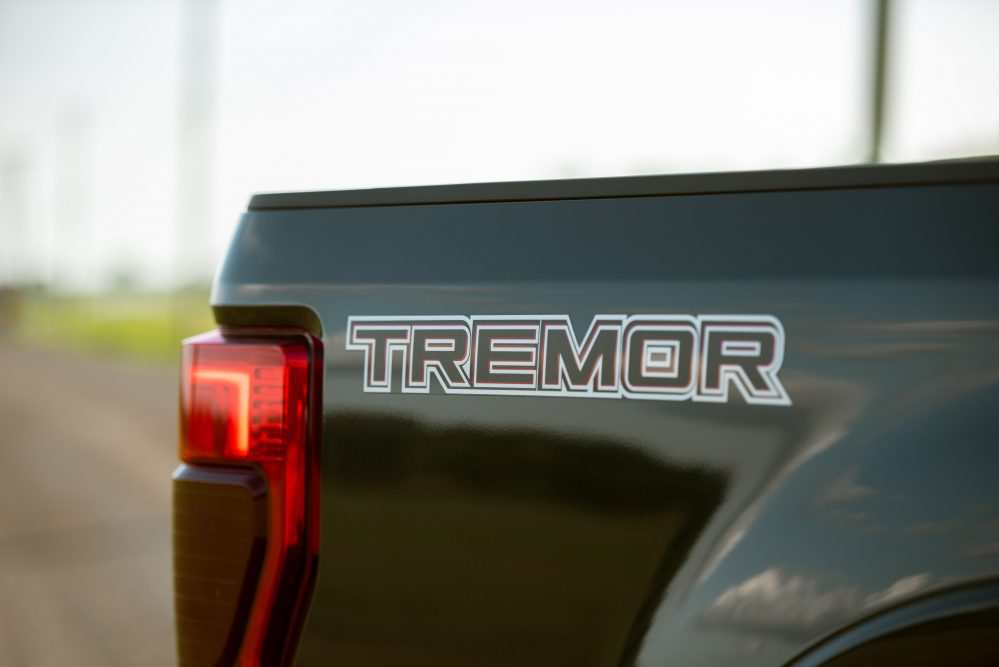 The Tremor is an all-new standalone package for the Ford Super Duty, which underwent a mid-cycle refresh for the 2020 model year. The Tremor aims to finally take on the Ram Power Wagon and the new GMC Sierra 2500 HD AT4 while marking Ford’s first real attempt at entering the heavy off-road space. Changes to the truck’s looks are subtle, incorporating slightly redesigned headlights and bumpers as well as a reshuffling of available packages. 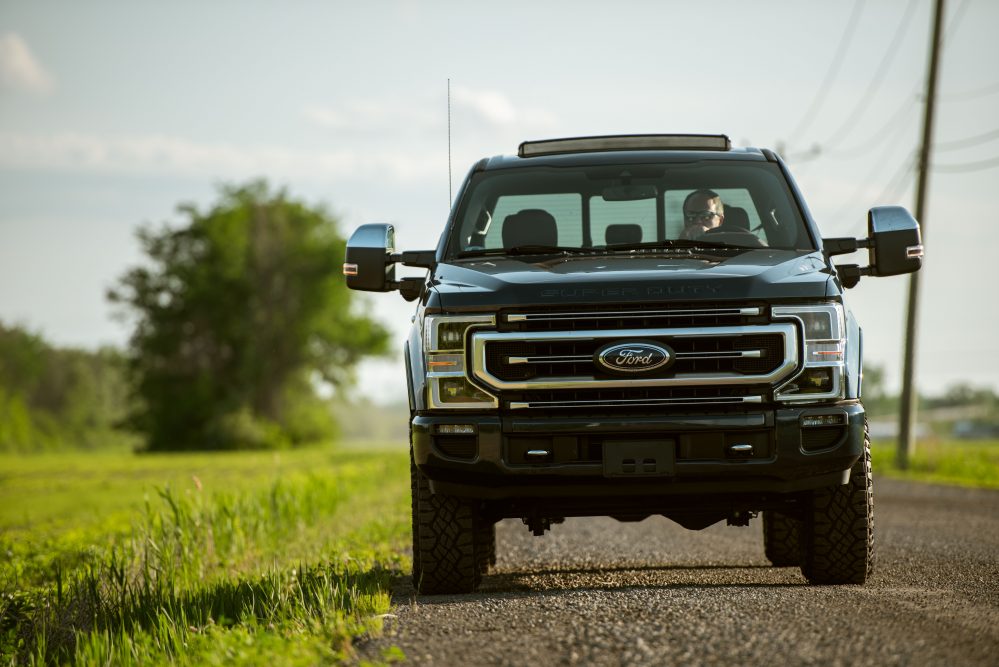 It’s under the hood that you’ll see the most substantial changes. An all-new 7.3-liter V8 engine (internally known as “Godzilla”) joins the party with 430 horsepower and 475 lb-ft of torque on tap. That, the unchanged 6.2-liter base V8 and the 6.7-liter Power Stroke turbodiesel V8 are all now connected to the Ford-GM 10-speed automatic gearbox. 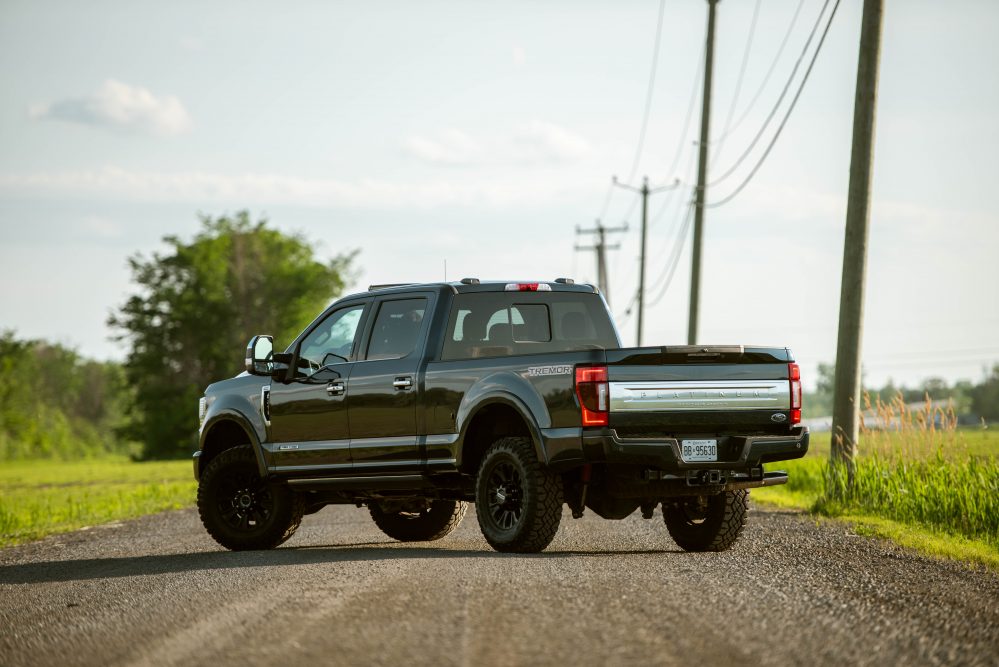 The truck you see here is powered by the turbodiesel V8, which got a healthy dose of upgrades as well. It now develops 475 horsepower (up 25 from before) and a downright insane 1,050 lb-ft of torque, beating Ram’s record of 1,000 lb-ft. 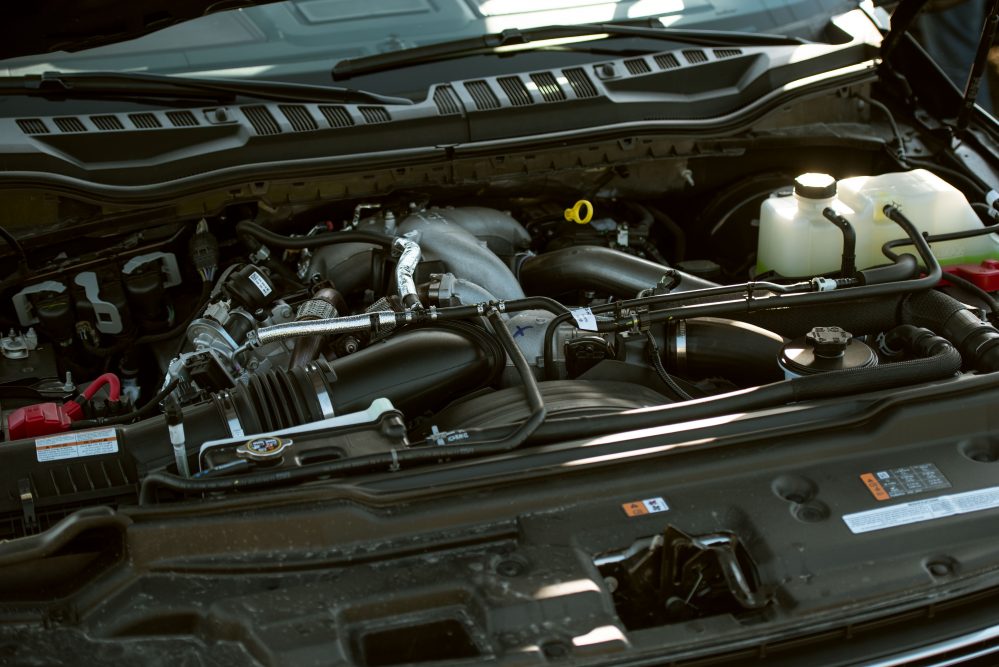 The Tremor package can be bolted onto any single-wheel F-250 or F-350 above the base XL, as long as it’s equipped with four-wheel-drive, the Crew Cab cabin and the 6.75-foot bed. The package, which sells for $5,120, adds the following equipment: 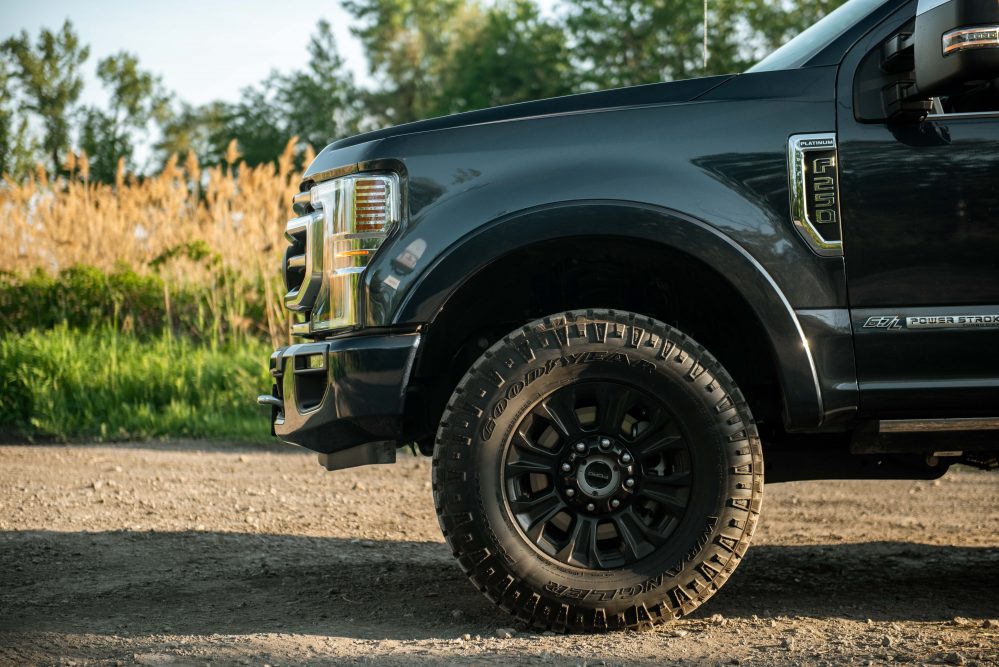 As you can see, it’s serious stuff, more serious even than other adventure-seeking kits like Toyota’s TRD Pro trim or GMC’s AT4 models, and totally worth the price. However, I do recommend not going crazy with the options list, as the 2020 Ford F-250 Tremor with the Platinum trim you see here stickers for a staggering 99 576 $! 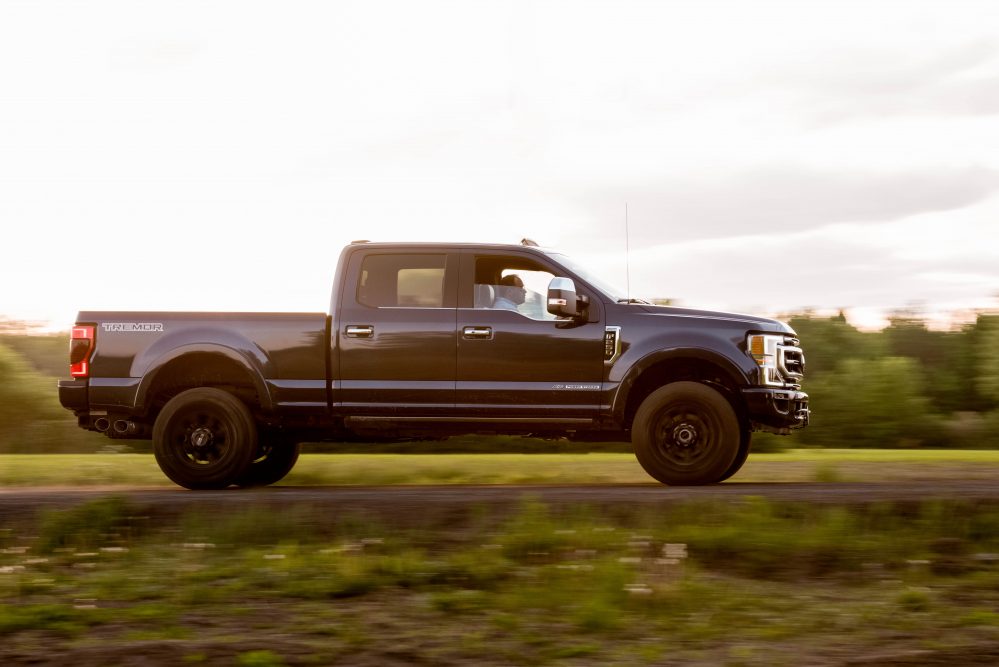 I drove the 2020 Ford F-250 Tremor in two different situations, the first being on a heavily damaged utility road filled with rocks and mud holes, the second being on the road here in Montreal. 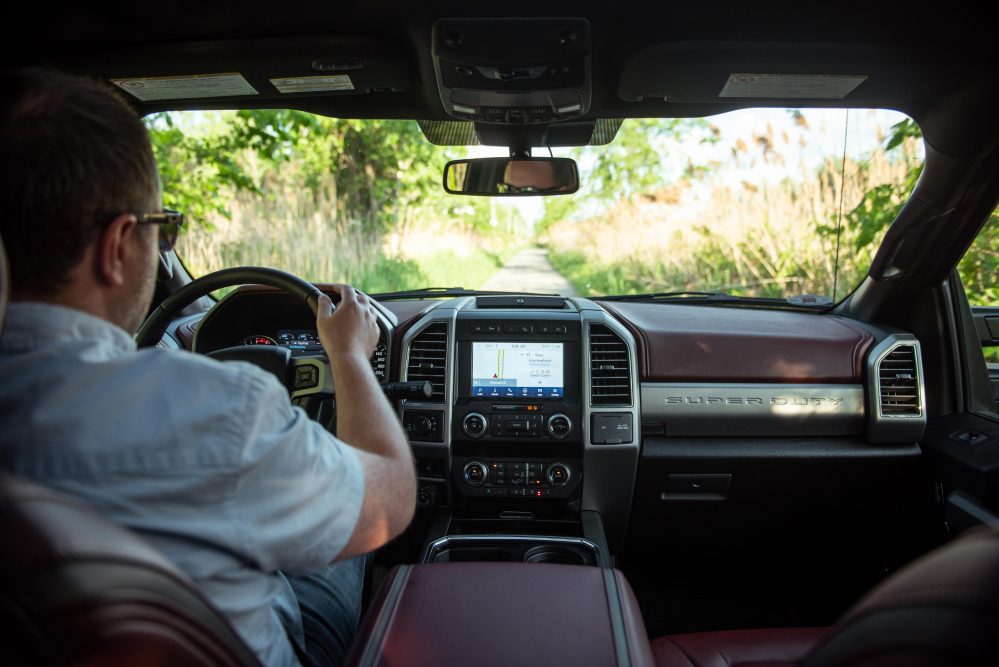 Obviously, my three-quarter-ton rig had no issues crawling its way out of the trail, because, well, that’s what it’s made for. If you wonder where the Tremor stands in the vast world of adventure-hungry pickup trucks, see it as a Raptor version of a Super Duty. 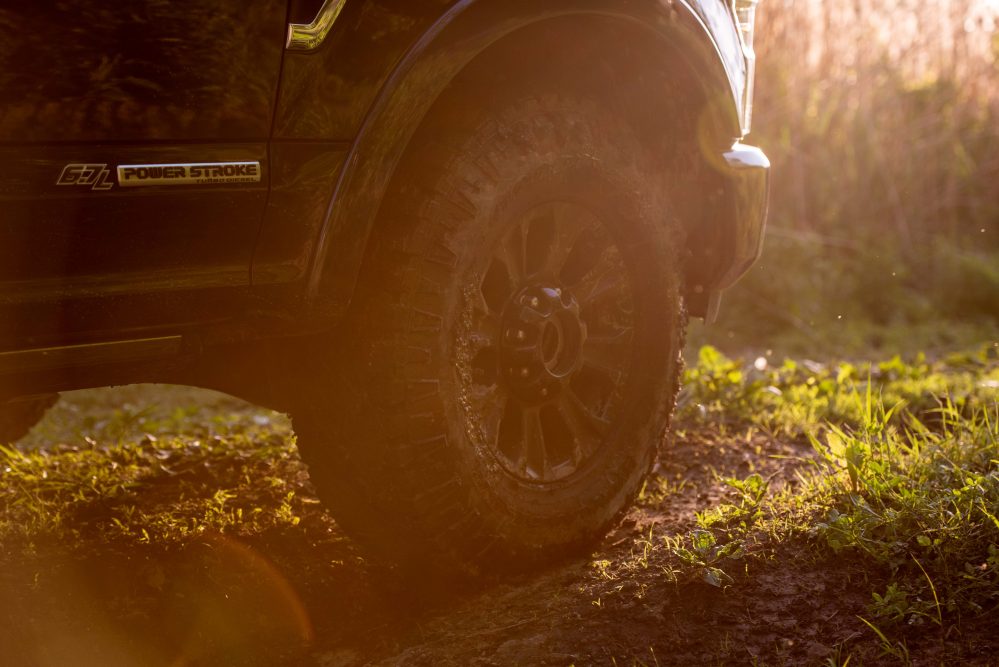 Except, unlike the Raptor, which was first and foremost designed to jump over sand dunes at full throttle, the Tremor is better suited for hauling logs through a flooded forest in 4×4 low. 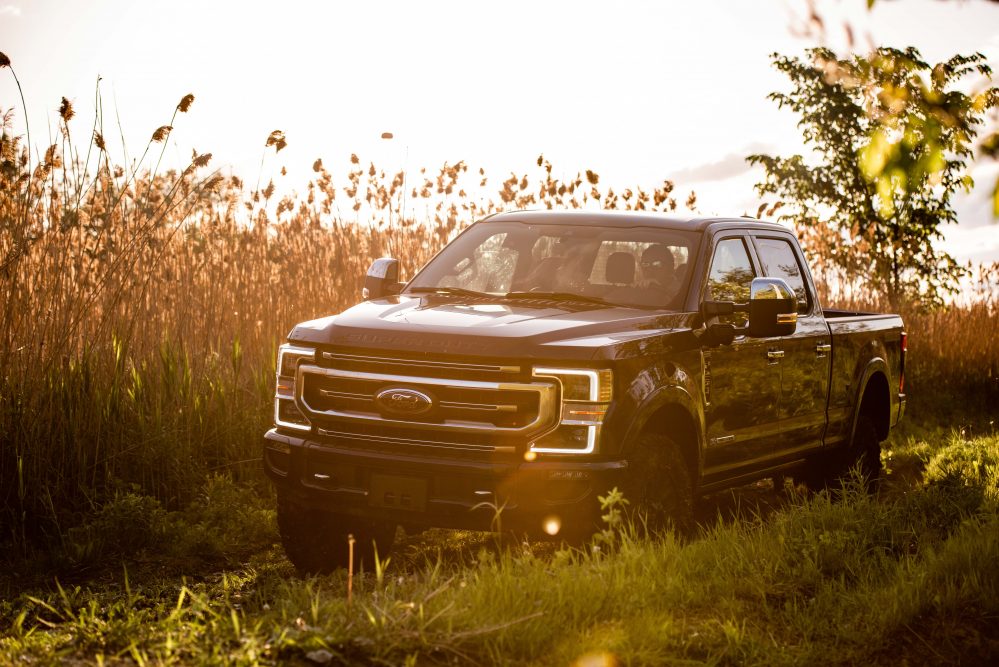 That, towing, the Tremor does rather well thanks to an 18,100-pound rating once equipped with the gooseneck trailer option. That’s better than the Ram Power Wagon (10,350 pounds) but still slightly less than the GMC Sierra 2500 HD AT4 (18,500 pounds). It’s however important to underline that the Ram Power Wagon is built mainly for off-roading, while the Ford and GMC are a little more work-focused. 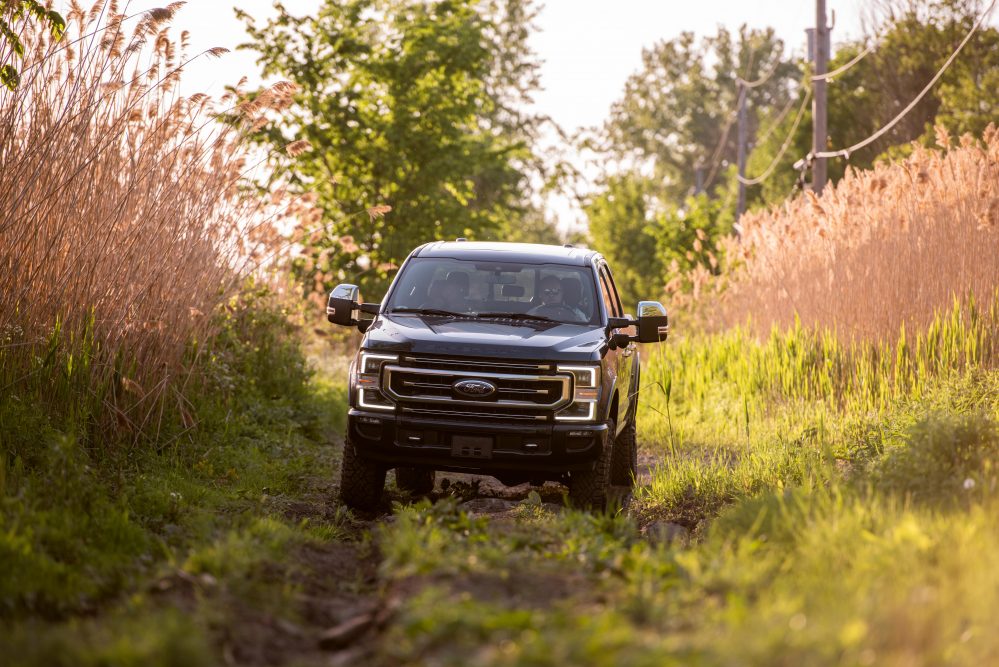 In the Tremor, you engage four-wheel-drive by turning a knob located on the right side of the steering wheel. Turning that knob again sets the system to 4×4 low, while pulling on it locks the rear differential. Unfortunately, For doesn’t offer an automatic setting similar to what you get in a Ram or a GM. 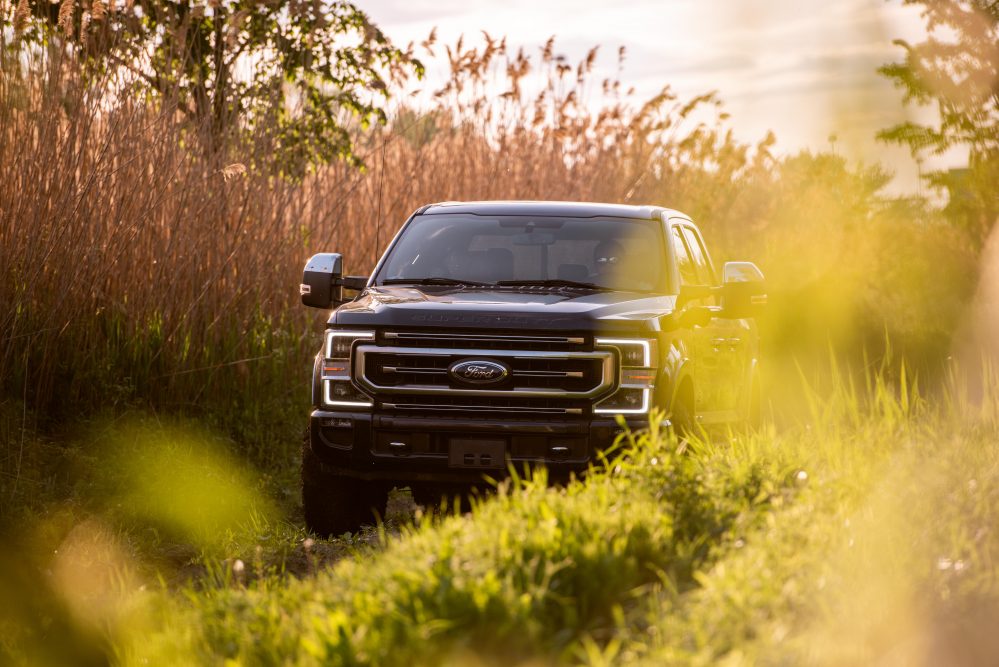 You then have available drive modes, ranging from Towing, Slippery, Deep Sand, Snow and Rock Crawling, each of them considerably alternating the transmission, throttle response, traction control system and ABS brakes for ultimate traction. And all just works. 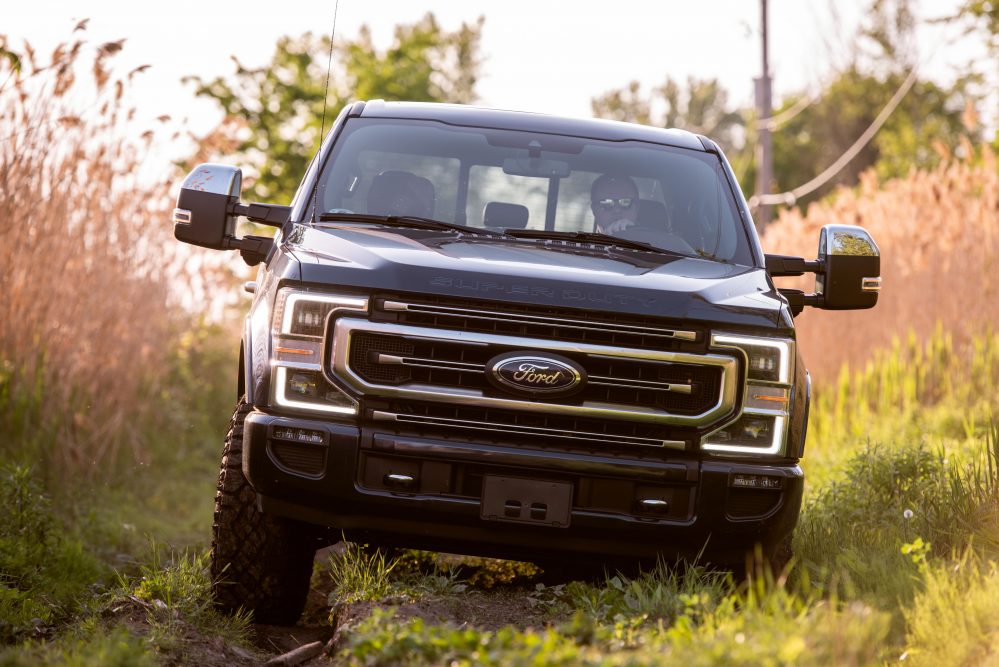 Those tires grip onto rocks as the truck figures out the best possible way to crawl its way out of muddy pit, while the suspension proves remarkably smooth, although it’s never as articulated as Ram’s setup in the Power Wagon, which can actually remove its sway bars for optimal body movements. 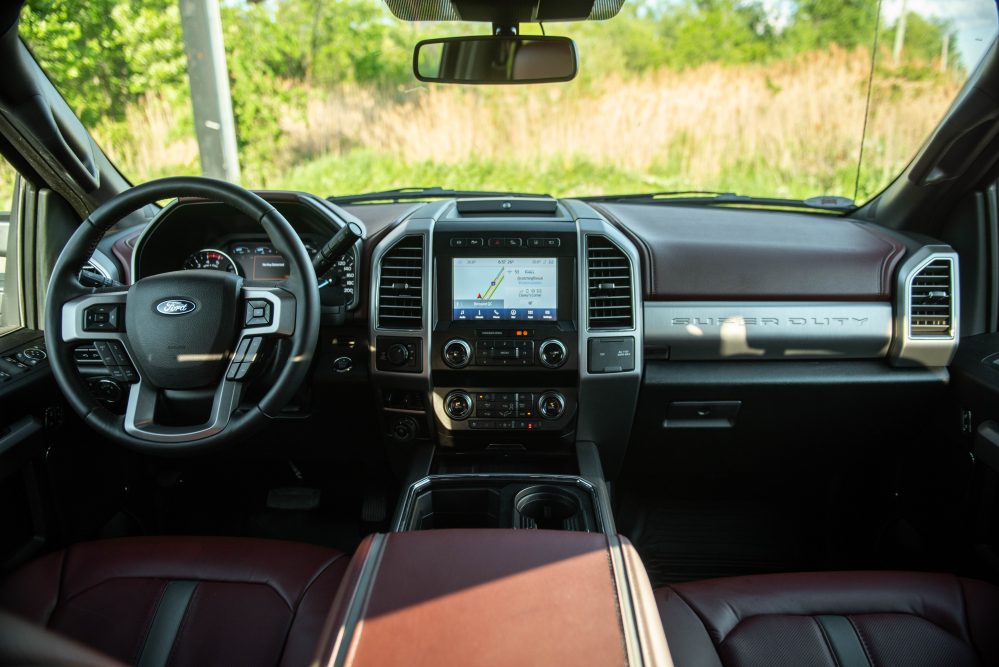 Once on the road, the Super Duty’s large and frankly luxurious cabin proved quiet, comfortable and so spacious a Bantam soccer team could fit inside. My truck had the exquisite Kingsville Dark Marsala leather surfaces, complete with massaging and cooling seats, a panoramic roof and a 10-speaker, 1,000-watt Bang & Olufsen sound system. It feels like a large Lincoln in there. 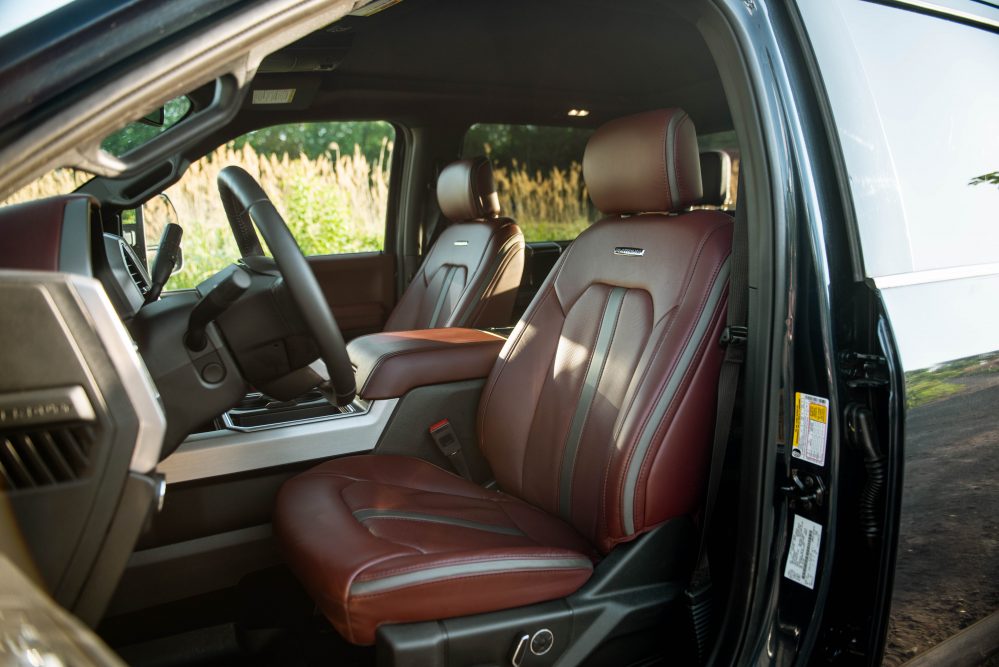 Meanwhile, the automatic gearbox is butter-smooth and so seamless during urban driving that you wonder if there’s even a transmission underneath that ginormous hood at all. And while the available camera system made parking this behemoth a breeze, the cameras themselves only automatically turn on when engaging reverse. You need to press a button to activate them when crawling forward, which can become a little annoying around town. 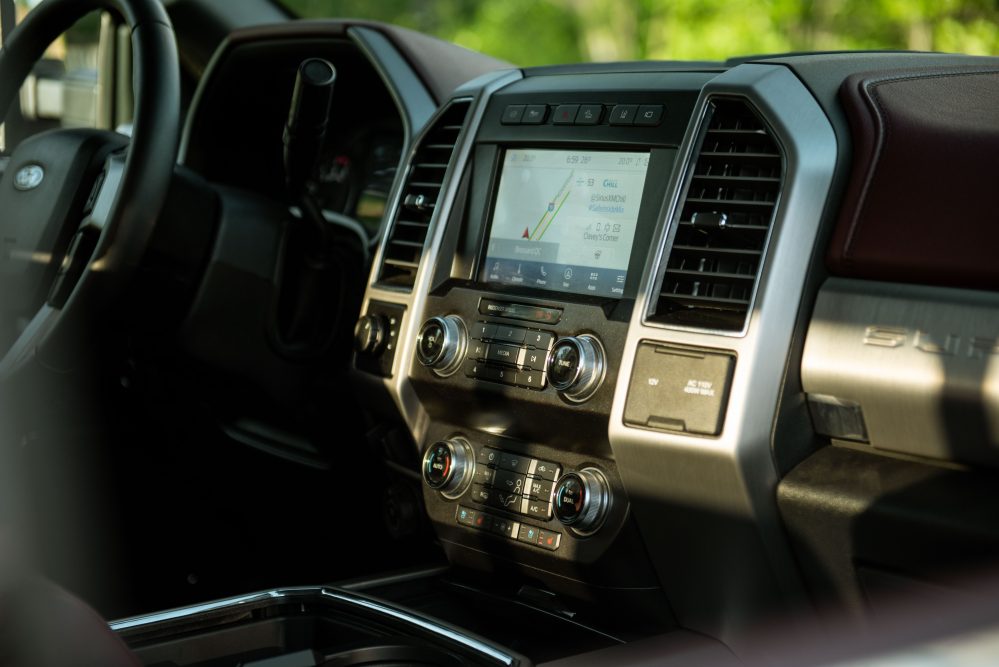 Slam the throttle and the Power Stroke engine responds with a tsunami of torque, providing swift and honestly impressive acceleration times. Turbo lag, an inevitable turbodiesel flaw, is less present here than in the competition. However,  those fat knobby tires and lifted ride height make the truck wander on the road. I often had to correct the steering so it could track straight. 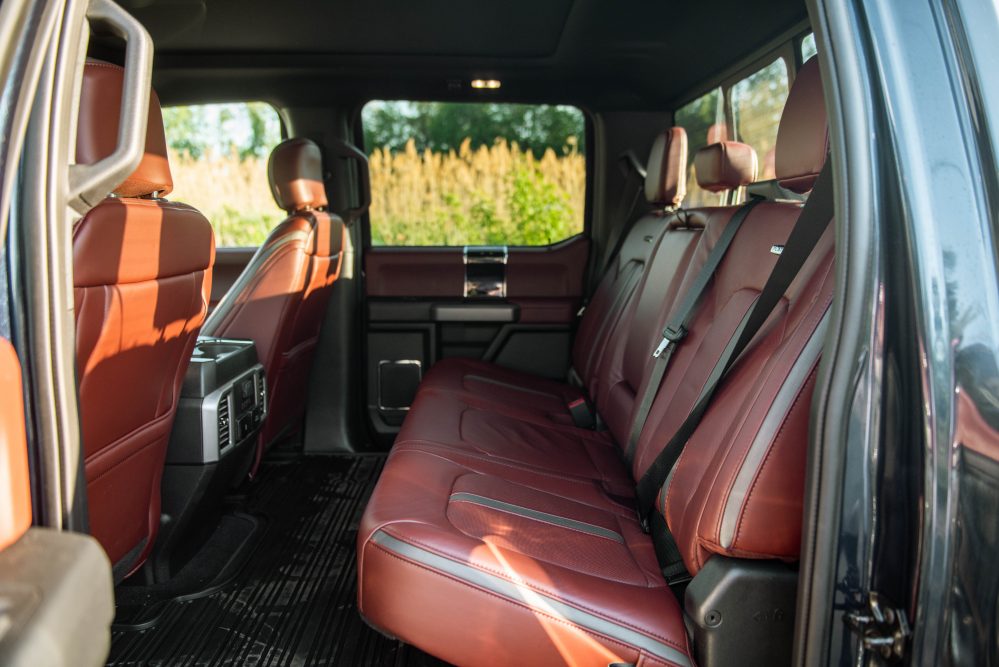 Where the 2020 Ford F-250 Tremor kind of lags behind its rivals, is in modernity. Believe it or not, although this truck has only been around for three years, it already feels old compared to its rivals. Some shady cabin materials reveal some cost cutting, while the eight-inch infotainment screen feels like it’s from another era next to Ram’s 12-inch Tesla-like tablet. And don’t get me started on Ford’s “manstep”, which seems to come from the Dark Ages when compared with GMC’s MultiPro tailgate. 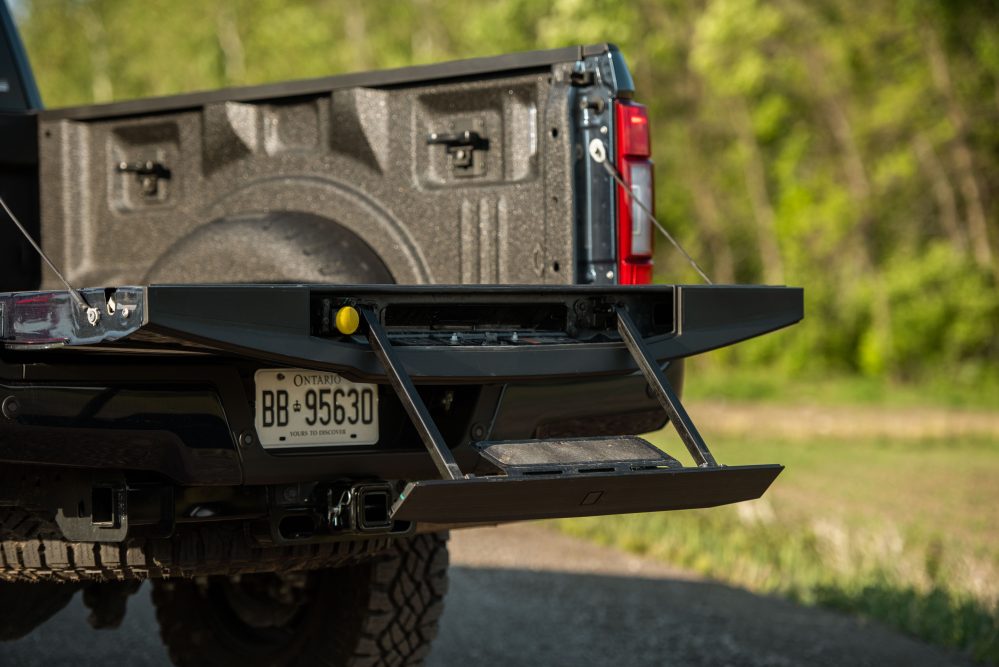 Where this Tremor shines, is in sheer numbers and its capability to humiliate Jeeps and 4Runners in a hardcore trail, all while seamlessly towing a small mountain. If you’re looking for the ultimate work truck to GTFO into the wild, it doesn’t get much better than this. 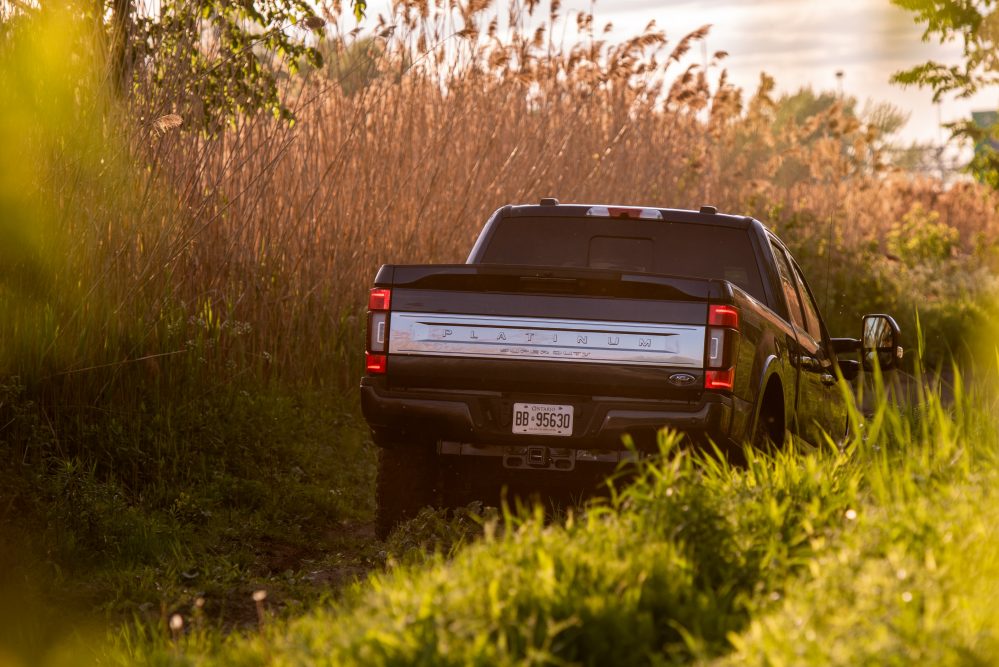 That said, consider the diesel option only if you run a business, as the engine itself ($10,000!), plus the maintenance costs associated with these kinds of engines, could be a rough pill to swallow if you’re the one doing to paying. Hey, at least there’s still the 7.3-liter Godzilla option, one of the largest gasoline V8’s to have ever been stuffed inside a pickup truck, and arguably to coolest name ever given to an engine.