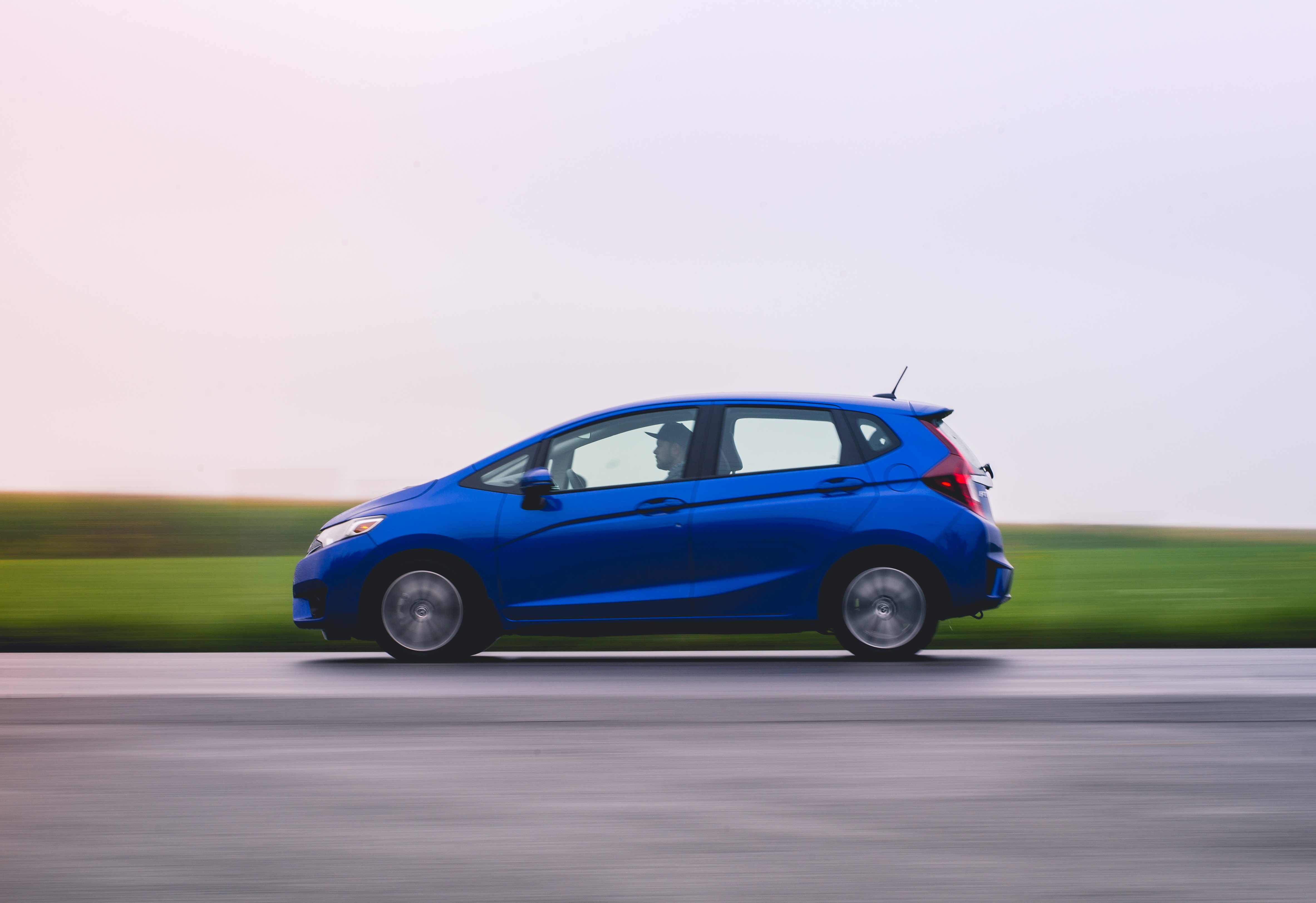 There are certain things in life that need to be left untouched. The wheel is a prime example of this. Nobody, nowhere, in the history of the world has ever thought of reinventing the wheel. I mean, it’s a freakin’ wheel, and as long as it gets the job done being circular, no one’s going to complain about its design.

The same rule applies to volume knobs on the devices we use. Smart phone companies have understood a long time ago that all controls on digital devices can be controlled via a touch-screen interface, but when it’s time to promptly shut down that device, nothing operates more flawlessly than a good old physical volume knob.

And here comes Honda with their touch-screen interface. Mind you, Honda is generally a champ at reinventing things. After all, that carmaker was born from tinkering, rethinking the status quo, and over-engineering stuff. But when they came up with the idea that it was best to re-engineer the ever-so important volume knob on their touch-screen interface, they transformed a system that was originally designed to avoid driver distraction into one of the most frustrating and counter-intuitive infotainment systems offered in today’s automotive industry. 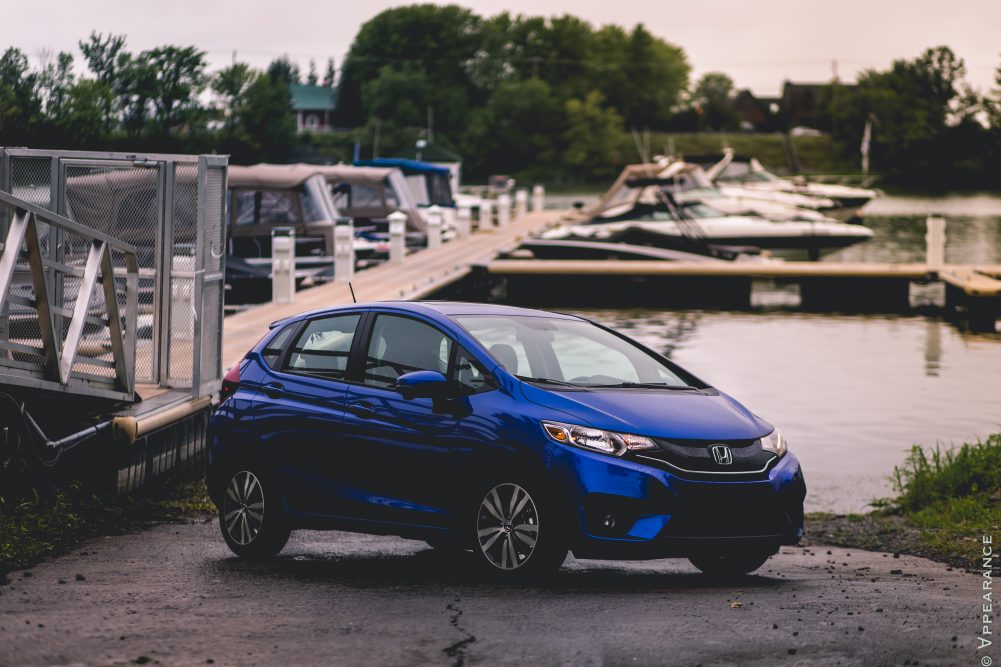 That 7-inch touch-screen display, like in the Accord and Civic I drove prior to this, comes standard in all versions of the 2016 Honda Fit (except DX trim); a car which excels at pretty much everything it was meant to do except shutting up the voice of that annoying car salesman on the radio. Make no mistake, the Fit is a brilliant little car in every respect; one that’s oozing with ingenuity and common sense. It’s also a champ at maximizing its otherwise puny dimensions.

By now, you’ve all heard about how the Honda Fit can reconfigure its interior to engulf pretty much anything you throw in it. You’ve seen the Honda commercials bragging about how you can fit an entire IKEA kitchen set through its tiny rear hatch. And I know what you’re thinking:

“So what? I have a Nissan Micra and it too can have its rear seats folded flat so I can fit my junk.” 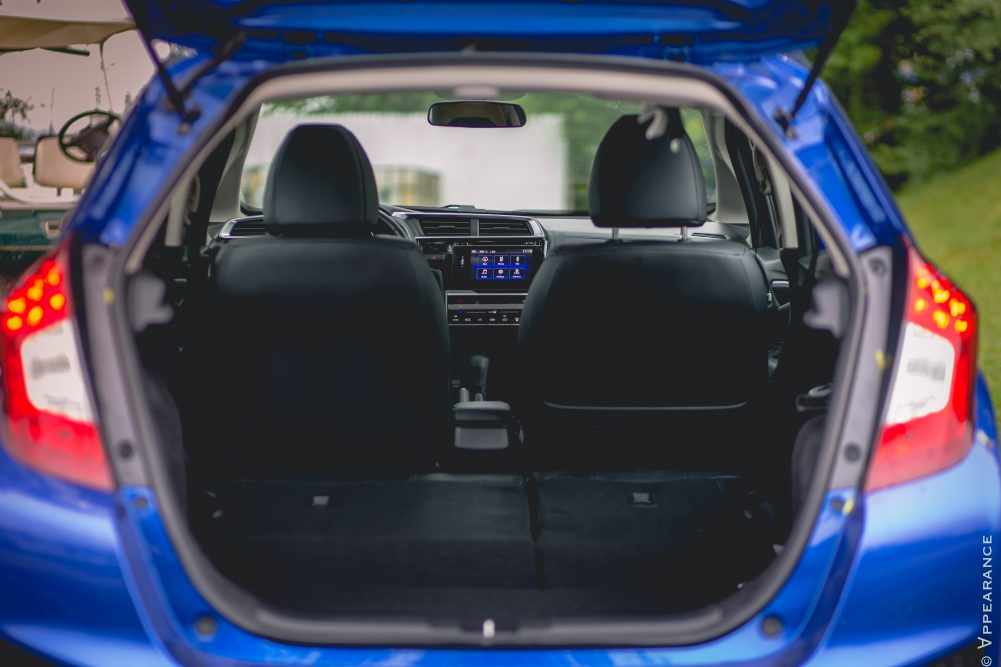 Because unlike your Nissan Micra, or any other subcompact hatchback on the market for that matter, the Honda Fit has its tiny fuel tank located underneath the front seats. This means that all the space available behind you is there for you to carry your valuable crap, or your friends.

All this translates to a subcompact car that is tiny on the outside, yet cargo van ginormous on the inside. There is also the cleverly named Magic Seats which not only fold down flat, but also upwards, allowing you to comfortably fit a fully assembled bicycle or a small tree directly through the rear passenger door. That’s something that cannot be said of any other automobile on the market today.  In fact, thanks to the Honda Fit’s massive 481 litres of cargo capacity, it outshines even some midsize sedans in overall cargo room. 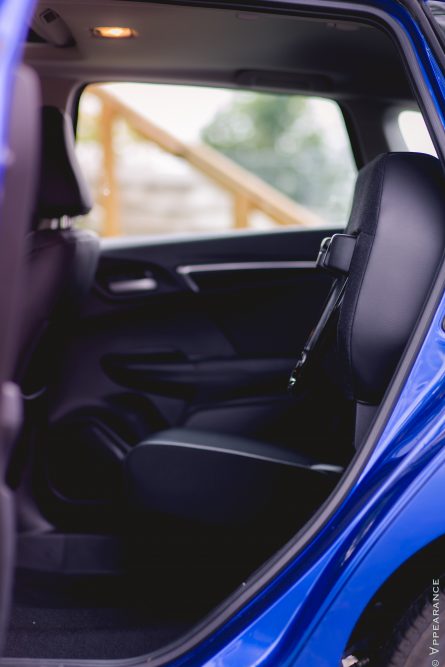 I mean, how cool is that? Here we are with a sub twenty thousand dollar subcompact that has more engineering pumped into it than most high-end sports cars. Good job Honda – now could you please put the same kind of know-how in your infotainment systems?

That said, the Fit is very impressive. And being the automotive journalist that I am, I just had to test out its advertised cargo space, which is why I went camping inside the one I had. Although I do admit that it wasn’t the most comfortable place to spend the night (that is, simply because I hadn’t thought of bringing an inflatable mattress or bug repellant), I can assure you that the little Fit engulfed my entire 6-foot, 210 lb body for an entire night like a boss. 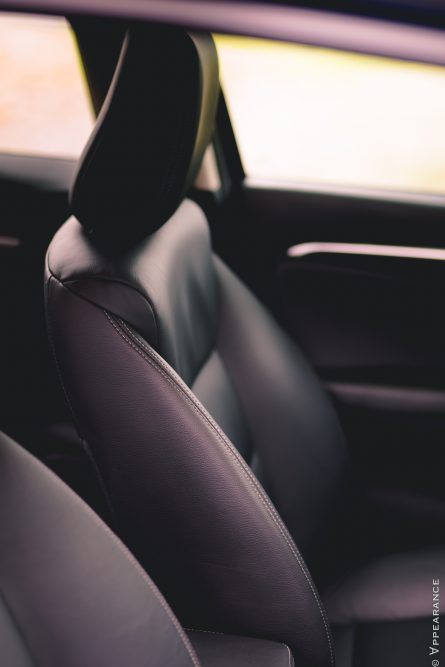 There is a problem with the seats though. They aren’t the most comfortable place to spend some time on. You could get over the fact that they’re hard, but since the entire car is built upright, any form of armrest, whether it be the centre console or the door, feels too low for a full-size human such as myself. More often than not, I would find myself squirming around the seat from lack of a comfortable stance.

Just Throw it in the Bends 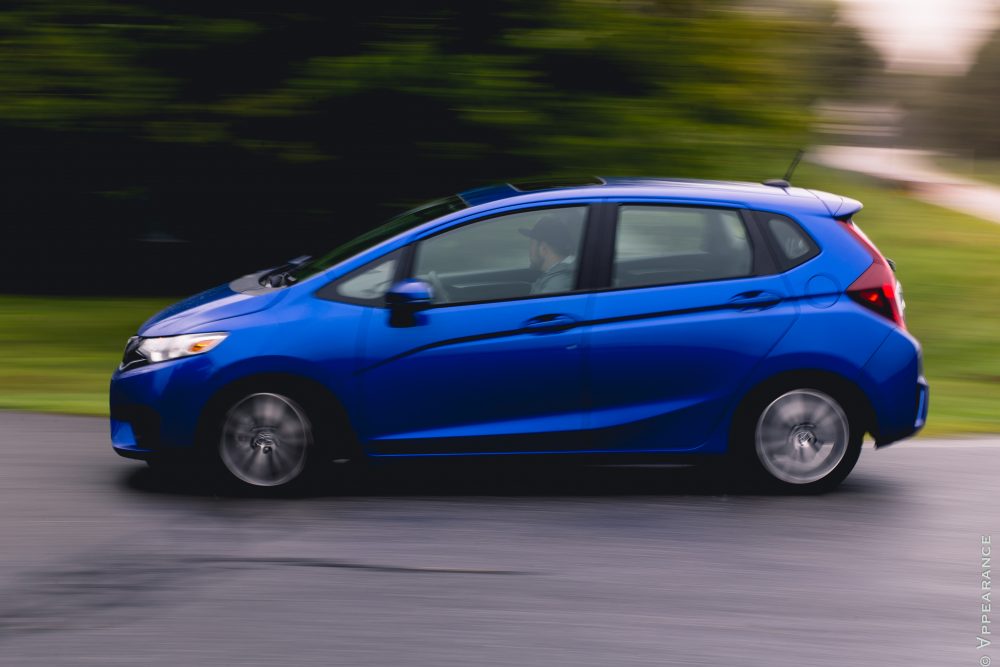 One element that made past generations of the Honda Fit so enjoyable was their ability to put a big fat grin on your face when you pushed the car to its limits. For this third generation, things have been slightly toned down in favor of a more compliant and refined ride.

I wonder if the last Honda Fit was a blast to drive on purpose or by pure accident. 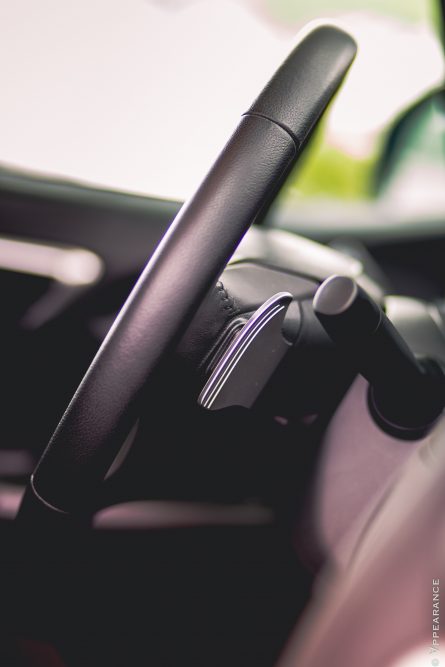 Nevertheless, in the past, you could throw a Fit hard into a corner, lift off the throttle and feel that little rear end bounce up and correct its line instantly. Now, the front tires simply plow forward and translate into frustrating understeer as the car remains confidently planted to the ground. Granted, this is an overall more mature and safer handling configuration; one which your mother would probably appreciate, but it does take away some of the much-enjoyable edginess we’ve come to expect from this nameplate. If you’re looking for a subcompact hatch that will make you smile every time you get behind the wheel, don’t look at Honda no more. Ford has a Fiesta that should have you served. 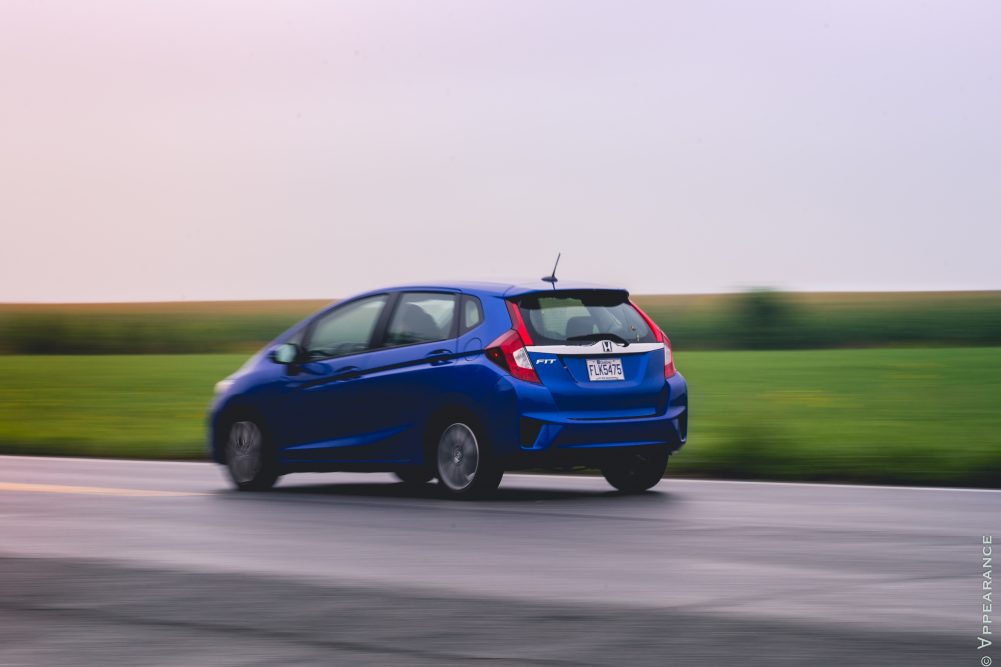 But does this prevent the 2016 Honda Fit from being fun to drive?

Not at all. The Fit still has enough dynamic charm injected into it to give you a pleasant time when driving it. Overall, it’s cheerful, light, and great fun to throw around. And yes, that refined suspension setup does contribute to making this Fit feel much more upscale than it ought to be, managing road imperfections the way you’d come to expect in more expensive offerings. Road and wind noise are still audible, but I mean, this is a Fit for crying out loud, and it’s really not all that bad in there. 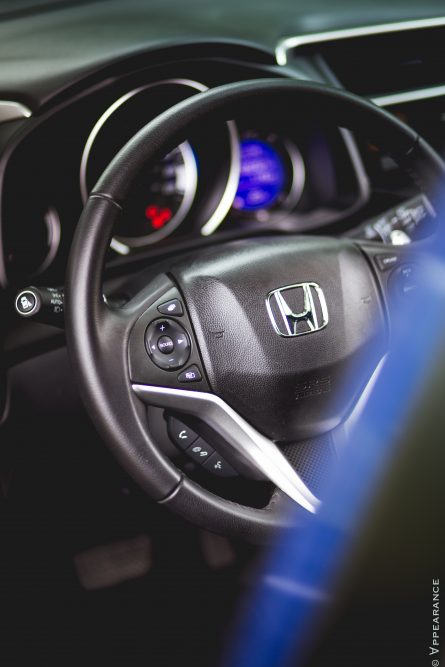 And if you want my honest opinion, it’s perfectly fine that Honda has dialed back the Fit’s frantic behavior, because the people buying this car aren’t in the market for a hot hatchback, but rather a cheap and efficient way to get their butts and gear around, something the Fit accomplishes like a champ.

There’s a CVT, but Go for the Stick 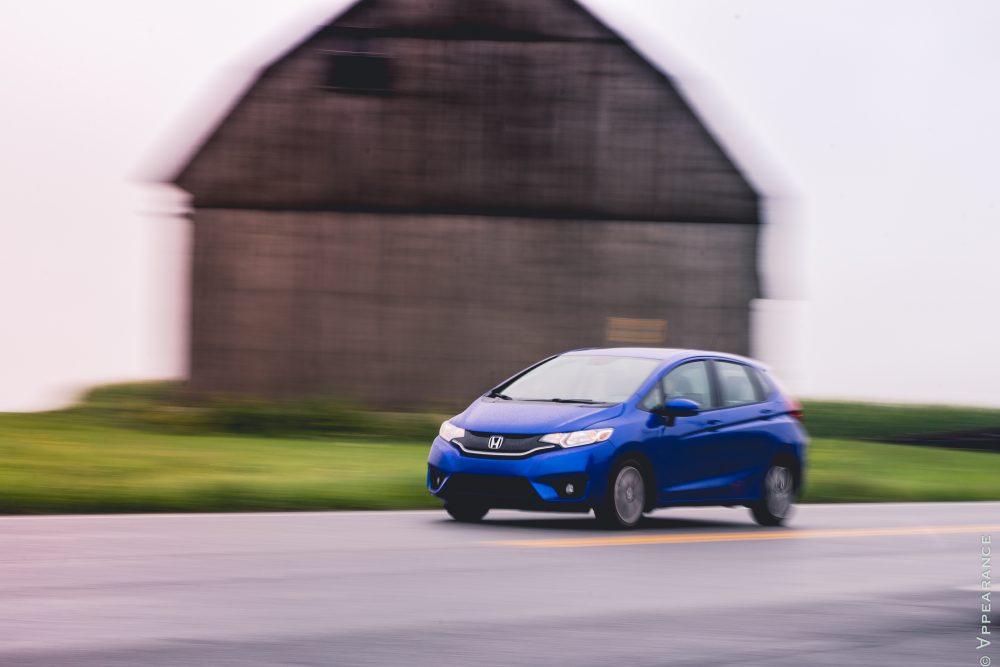 Powertrain wise, there’s only one engine available for the 2016 Honda Fit; an all-new and frankly impressive 1.5-litre 4-cylinder. It’s good for an appropriate 130 hp and 114 lb-ft of torque, allowing this Fit to be the fastest to 100 km/h in the segment (8.5 seconds), even with the CVT transmission. Manual Honda Fits take only 7.7 seconds to pull off the same stunt, which is frankly not bad for an econobox. 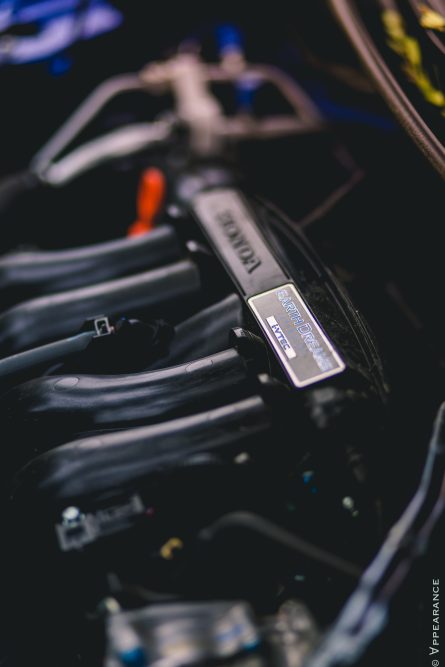 Of course, you’ll want to get your Honda Fit with the manual transmission, especially since the tiny engine loves to rev, and the only way to harness all the available power is by downshifting yourself.

That being said, is the CVT a soul-sucker? Well, yes and no. 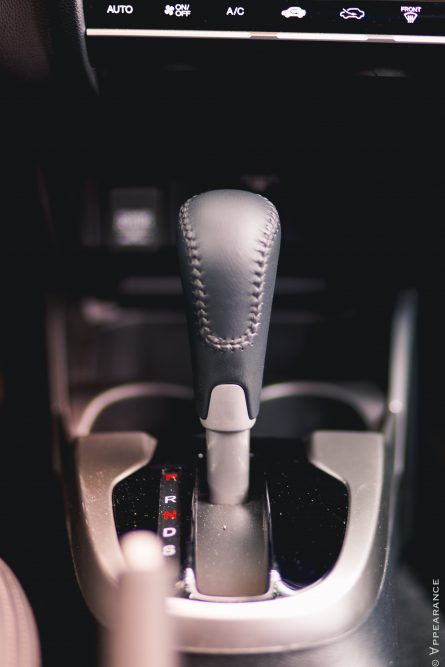 In the Honda Civic and Accord, the CVT is actually easy to live with because both of these cars have engines that offer plenty of low-end torque. Because the Fit was designed to maximize fuel economy and the 1.5 litre has little to no puff available under 4000 rpm, it’s hard to get any sort of go-power out of it. Oh, the CVT is smooth alright and doesn’t attract too much attention to itself, but the entire car feels overly sluggish with it. It’s only when you really smash the throttle that it finally gets up and goes, revealing a very unrefined buzz from the engine compartment which instantly makes you want to lift off. This 3rd generation Honda Fit, especially with the CVT, doesn’t want you to have fun.

Luckily, there’s still a playful puppy-dog like chassis under there that’s always begging to be pushed around. 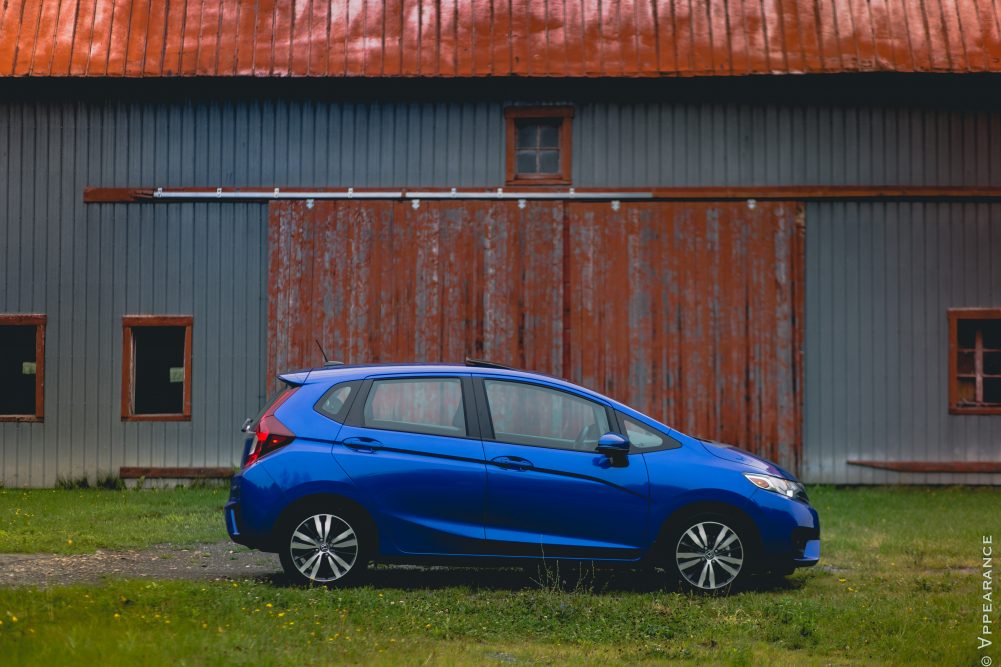 At the end of the day though, it’s very hard to hate on the 2016 Honda Fit. It’s just a cool little car to begin with, one which offers a great balance of attributes to make you want to buy one. This is a car I’d definitely recommend to those looking for a cheap, efficient, and practical way to get around. The key here, of course, is straightforward transportation, which is why I would not recommend buying the leather-filled trimmed, top-of-the-line EX-L model such as my tester. Rather, I would suggest going with a lower, more affordable trim level, and have it fitted with a manual transmission.

Prices for the Honda Fit start at a very decent $14 790 for a base DX version, which actually gets a volume knob. My tester, the EX-L, which came with leather everything, a power moon roof, the upgraded 7-inch touch-screen interface complete with HondaLink and other neat connectivity features, heated seats, fog lamps, and automatic climate control and navigation, sells for a not-so-affordable-for-a-Fit $21 590. 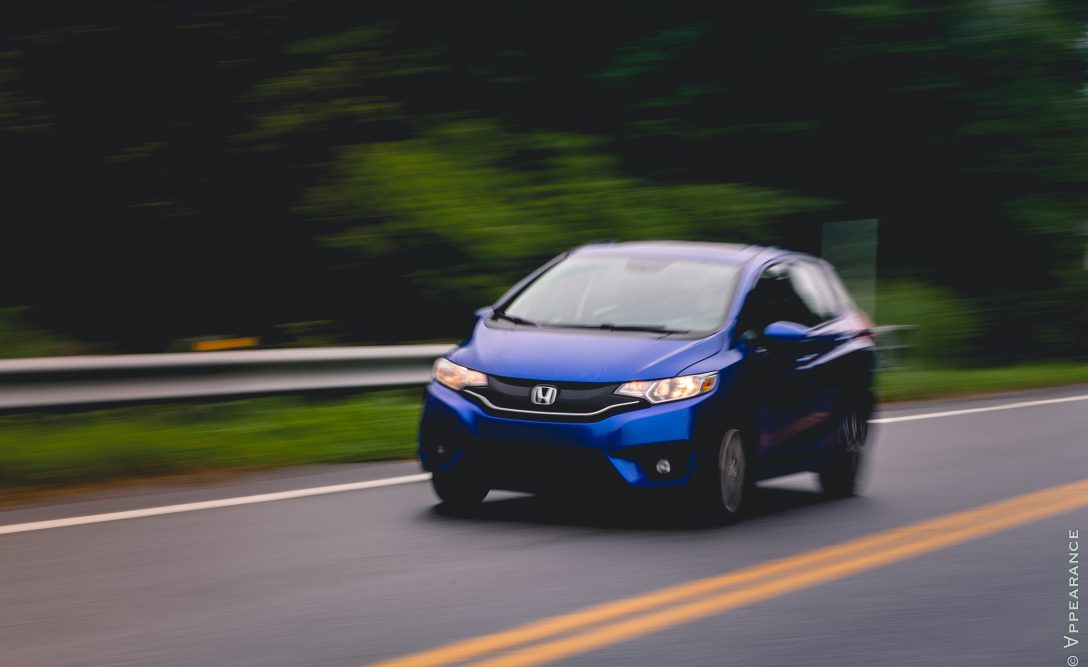 Now, unless you’re an absolute Fit aficionado, I would not recommend going this far in the Fit’s trim levels. Instead, I’d suggest going for the LX model. That one sells for a more subcompact-car-appropriate $17 590, and still comes with an array of cool connectivity features as well as that button-less 7-inch touch-screen display, which, I’m sorry to say, needs to be sent back to the drawing board to improve its overall user-friendliness. The system is laggy and confusing, and tasks as simple as tuning the radio or adjusting the volume become onerous and distracting. 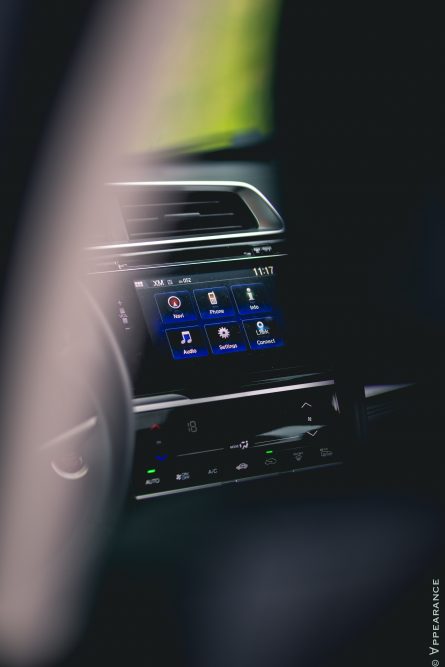 There’s only one electronic gizmo in my tester that I really enjoyed, and that’s Honda’s seriously cool LaneWatch blind spot display, which is only available on EX trims or higher. It’s essentially a camera located underneath the right rear-view mirror that allows you to see, the moment your turn on the turn signal, objects you normally cannot see through the glass. 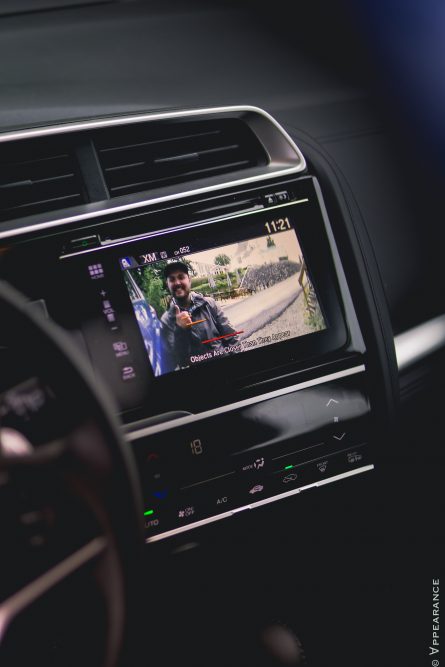 In conclusion, the 2016 Honda Fit remains the champ at delivering cheap and cheerful transportation. It’ll return a 5.7 L / 100 km average on the highway, will only cost $35 to fill up, and offers enough interior room for you to sleep in it in case you get stranded and can’t find a camping ground on a roadtrip. Let’s not forget Honda’s legendary reputation for reliability; while I yearn for the day we’ll be offered a Fit Si, one which would be able to trade punches with the Ford Fiesta ST or Fiat 500 Abarth, the 2016 Honda Fit remains without fail one of the most lovable little hatchbacks I’ve driven this year.

–
– Lack of a volume knob.
– Unintuitive and confusing infotainment system.
– CVT transmission sucks the life out of the engine.