2019 Honda Passport Is Based On The Best Possible Recipe 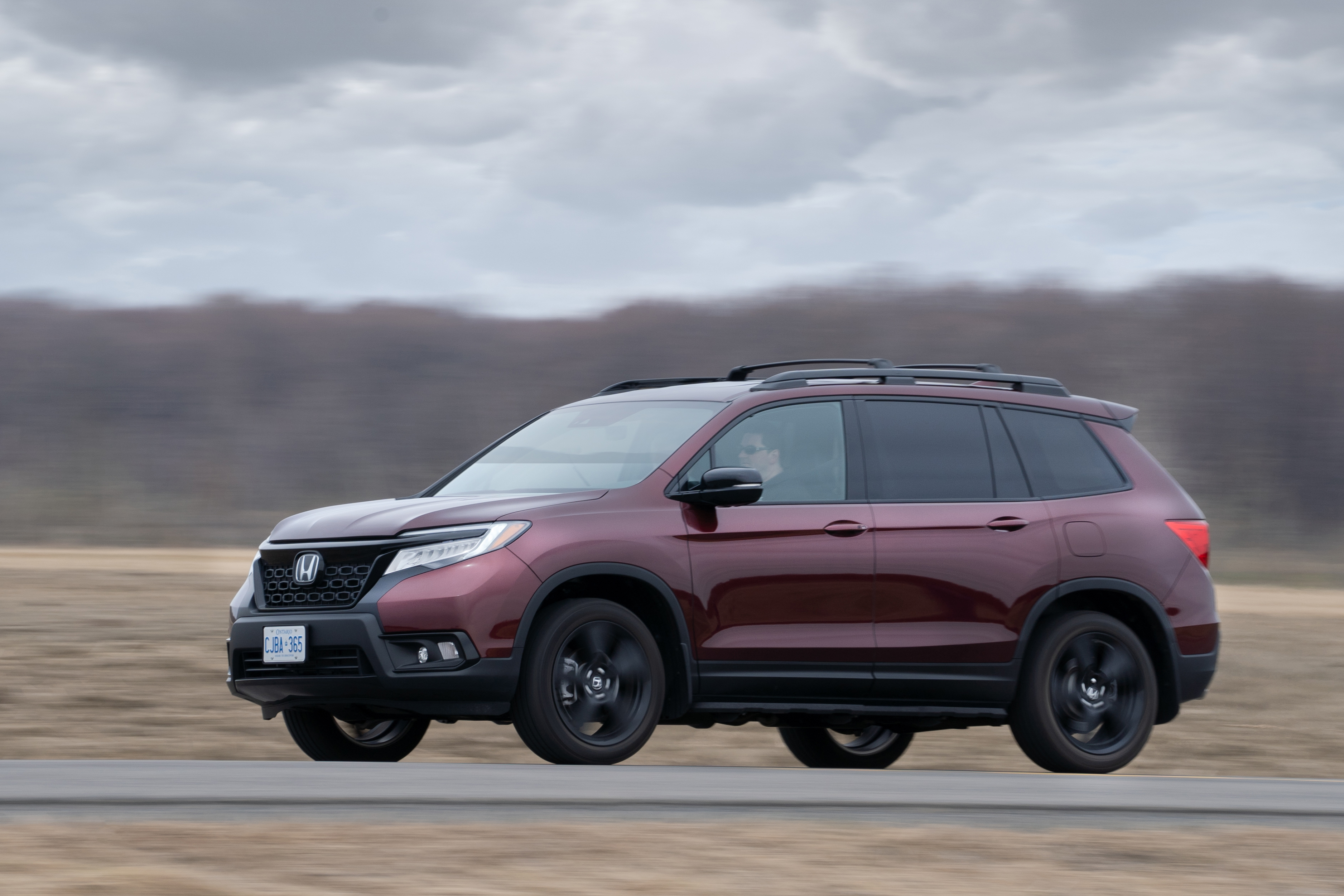 The 2019 Honda Passport looks a lot like a Honda Pilot because it is a Honda Pilot. Well, it is, until it isn’t. You see, when Honda realized people were buying more SUVs than Civics, it decided to add another segment in its lineup, the midsize two-row sport utility segment. And to get there, it basically took an already great people hauler, shrunk it, lifted it, and called it a day. 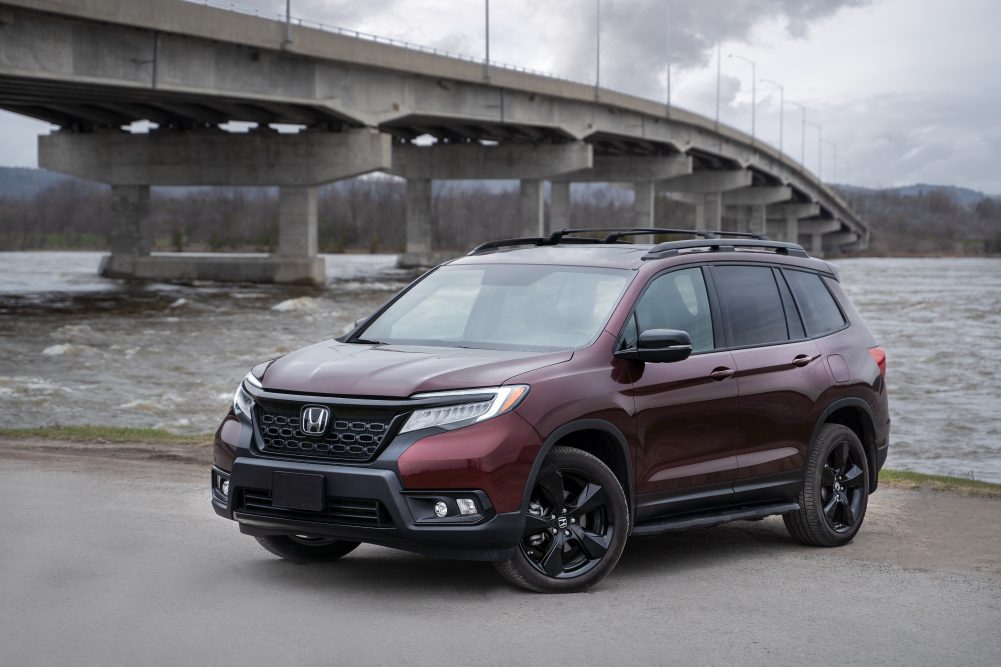 If you’re wondering why I’m not the one doing the stunt driving in this review, that’s because the pictures were taken during a comparison test we did at one of the outlets I write for. Since the Passport I drove a few weeks later was the exact same vehicle, I figured it was useless to shoot it a second time.

When I say the Passport is a Pilot, that’s because it rides on the exact same platform, uses the exact same engine, and puts the power down through the exact same transmission. Actually, everything from the front bumper all the way to the C pillar is identical. The wheelbase is the same, but overall length was shortened by 165 mm. The Passport is also 16 kg lighter than its big brother, with its suspension slightly lifted for a 206 mm total ground clearance. 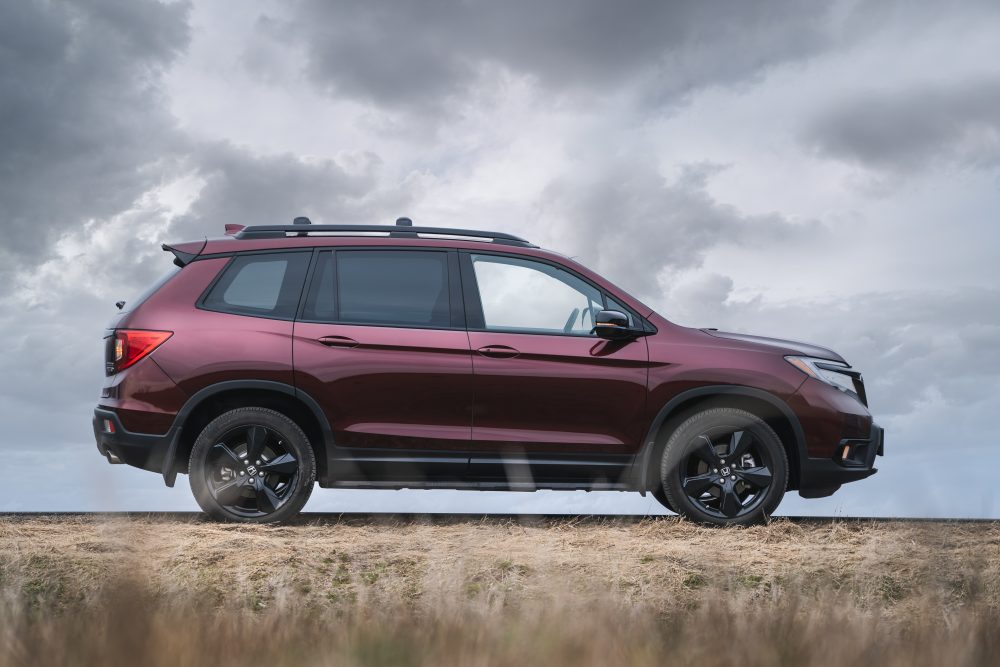 The fact that the Passport is a Pilot light is actually a good thing. If you’ve been following me, you know I love the Pilot and consider it to be, still today, the best possible application of a midsize SUV. It’s spacious, well put together, well priced, quick enough and stupidly reliable. It will also tow up to 5,000 pounds (2,267 kg) when properly equipped. The Passport inherits all of these qualities. 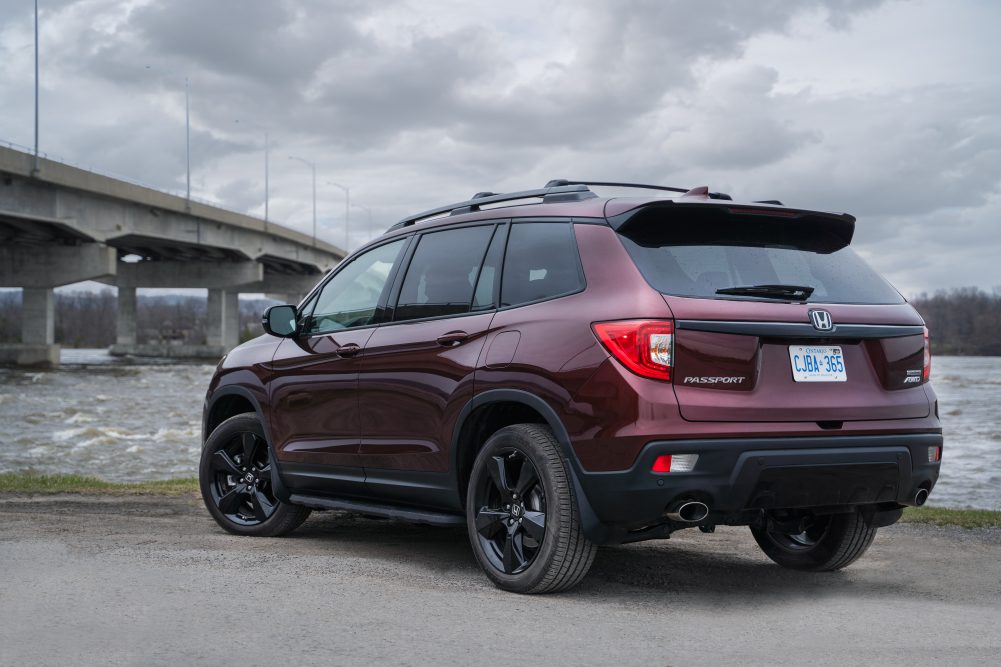 This means that when comes time to take on its newfound segment, with contenders like the Nissan Murano, Ford Edge, Hyundai Santa Fe and Chevrolet Blazer, the Passport arrives in the ring with a good advantage. The Honda is the most spacious, with a larger cargo hold both with its rear seat in place (1,160 liters) and folded down flat to the floor (2,208 liters). It can also tow more than all of its rivals, and will outrun them in a 0 to 100 km/h acceleration race, which it’ll accomplish in a swift six seconds flat. 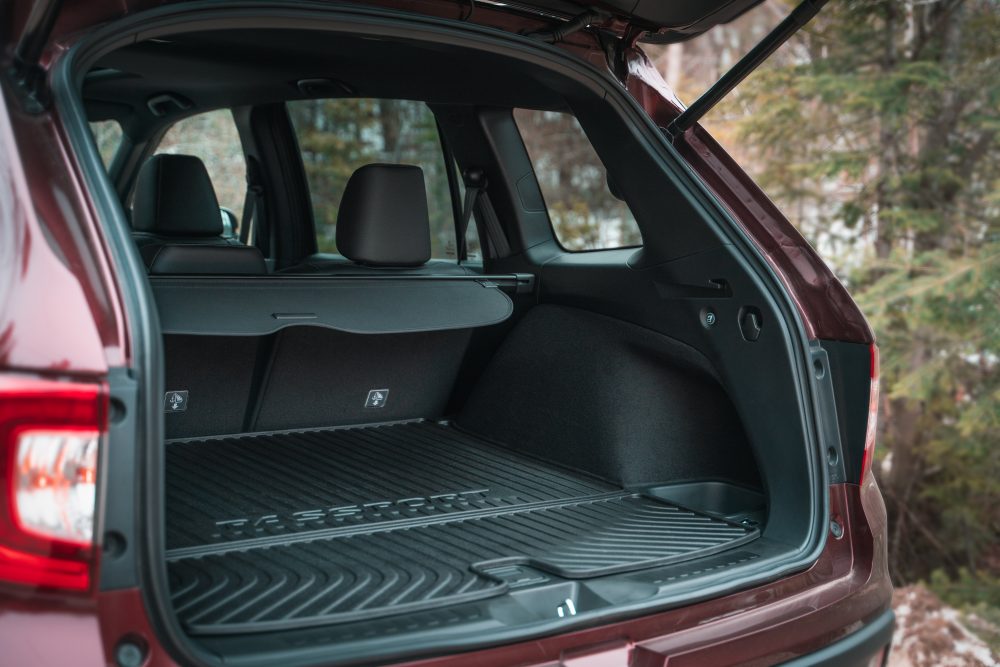 All Passports sold in Canada come standard with all-wheel-drive. The sole powertrain option is Honda’s tried and tested 3.5-liter naturally aspirated V6. It’s good for 280 horsepower and 262 lb-ft of torque. A ZF-sourced 9-speed automatic gearbox sends it all to the wheels. Prices kick off at $43,900 for an entry level Sport model. My tester was the fully loaded Touring which stickers for $50,900. 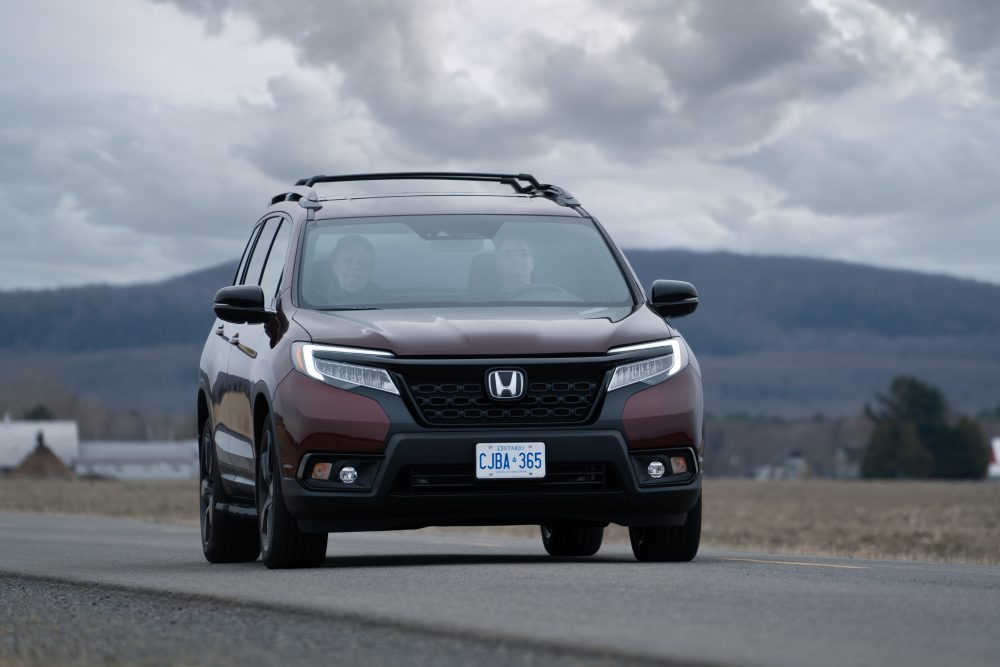 This is going to be a rather straight forward review since you and I already know that the 2019 Honda Passport is an excellent vehicle and the best possible choice in its class. But that’s not to say it’s perfect. While it has a lot going for it, it’s also deeply flawed. 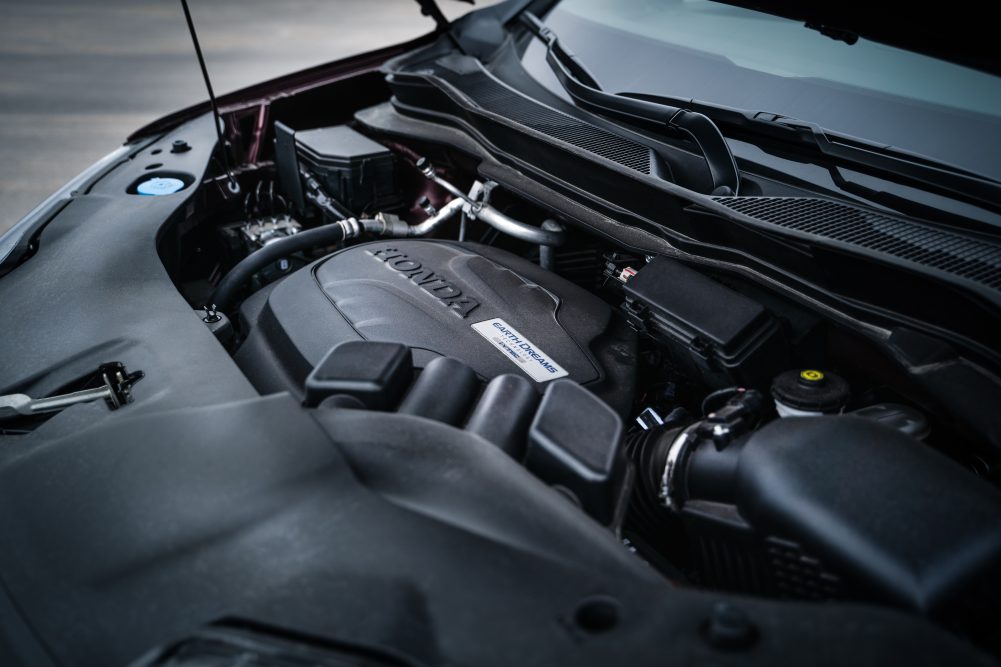 Let’s start with the good: it’s engine. That 3.5-liter V6 is one of the last survivors of Honda’s high-revving legacy, and it downright remains one of the best six-cylinder engines available today. Not only does it allow this Passport to get up and go quicker than its rivals, its immensely smooth, filled with low-end torque, loves to rev and orchestrates all the right sounds.

The most notable one is the intake sound, which, when the VTEC system turns on go-fast mode, emits an audible bark in the cabin. It’s a lot of fun, the kind of entertainment that’s all but absent from any other vehicle in this class, except maybe the V6-powered Blazer. 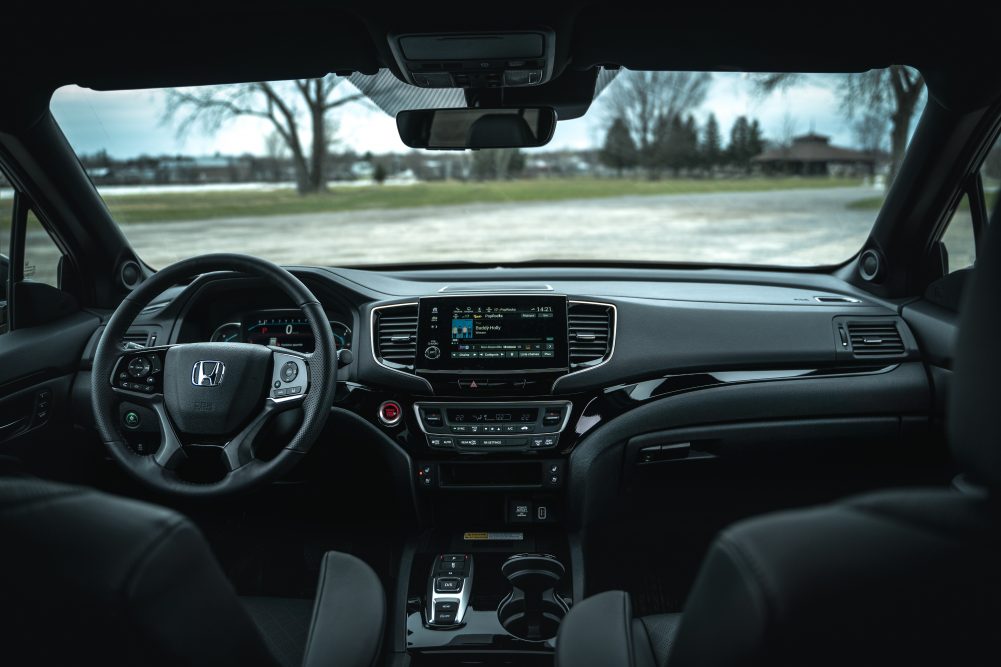 Then there’s how comfortable and spacious its cabin is. You sit upright in a Passport, with a minivan style armrest on your right, and an ginormous centre console in which you can toss virtually everything. Visibility is near perfect, and I absolutely adore this thing’s road composure. Fine, it’s no McLaren, but just like everything that rides on this platform; the Ridgeline, the MDX, the Passport feels athletic, sporty and buttoned down enough to have a bit of fun with it in the twisties.

Sadly, that’s when certain things start falling apart. While Honda claims to have improved the shift times in the nine-speed gearbox, it’s still a laggy and confused unit. I still don’t understand why Honda doesn’t fit its V6-powered vehicles with its own ten-speed gearbox it uses in the Odyssey. My assumption is that Honda signed a deal with ZF and needs to hang onto it for a few more years. Sadly, it kind of ruins the otherwise fantastic engine. 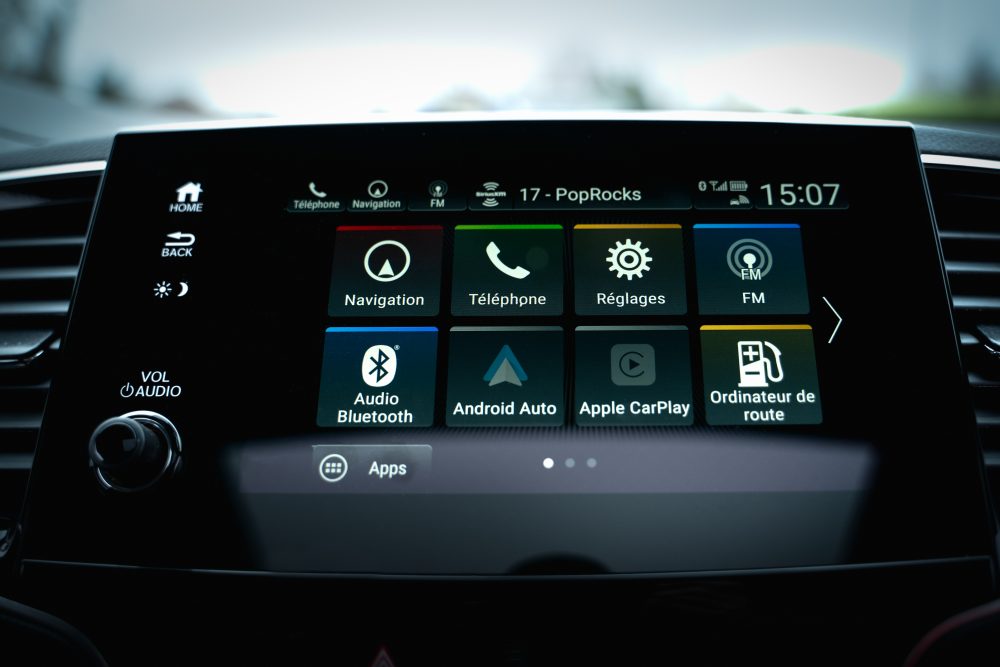 The Display Audio infotainment remains a confusing one. Honda’s been slowly improving its systems across its lineup. The Accord has the best possible interpretation of it, but this gets a half-baked version, with a relic of the old button-less interface on which Honda added a volume knob as a last-minute attempt to fix it. The problem is that its menus remain counter-intuitive, the interface itself is complex and the entire system comes through as everything but user-friendly. The larger icons help to a certain extent, and their layout can be customized to your liking, facilitating daily operation. But they can’t hide the system’s ageing architecture. At least, it’s compatible with all the latest toys in the book; Android Auto and Apple CarPlay compatible. 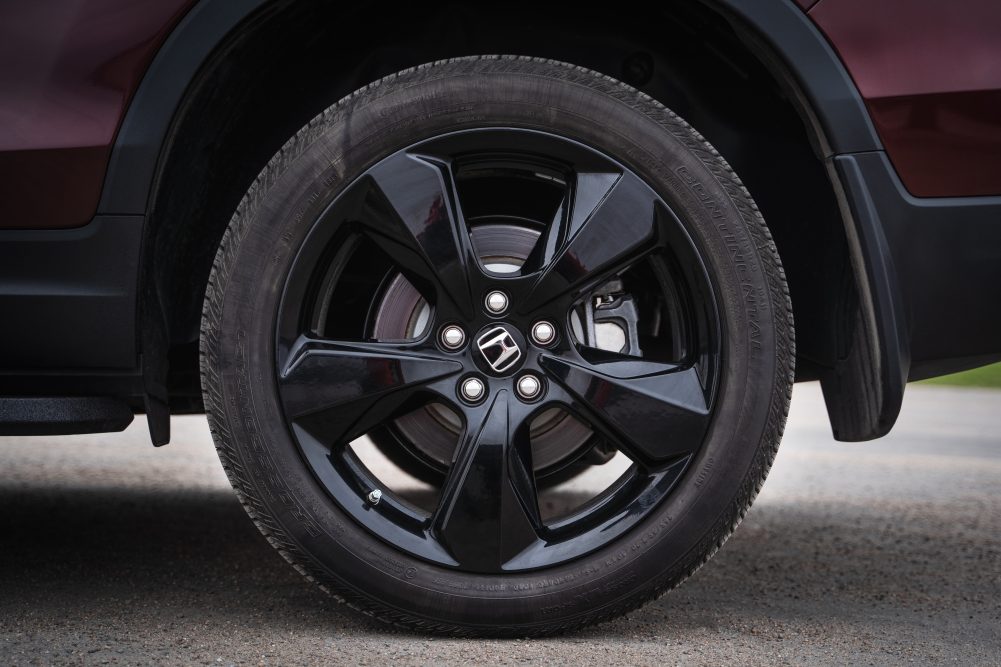 Finally, there’s the way the 2019 Honda Passport looks. The Pilot already looked dorky, but in this form, with its stubby rear end, and lifted ride height, it looks like the stuff of cartoons. The blacked out grille and wheels sort of tone things down, but I’m sorry, I can’t call this thing attractive. If I were to base my purchase on looks alone, I’d get a Chevy Blazer before this. 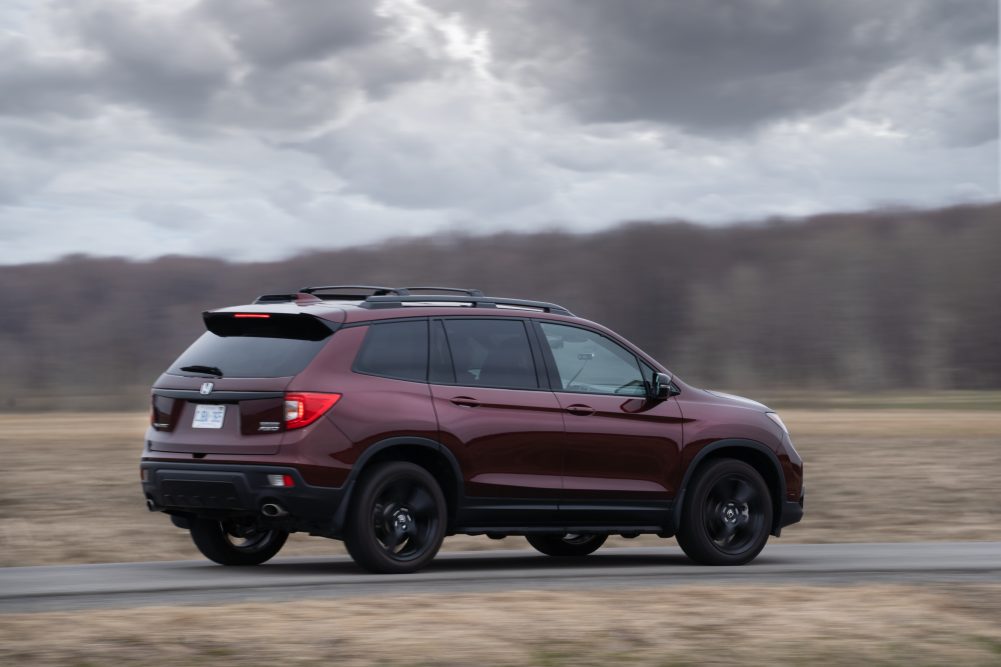 But these vehicles aren’t typically purchased out of passion, but out of necessity. For the buyer who needs to tow, but doesn’t necessarily need seven seats, the 2019 Honda Passport is a brilliant solution. It’s spacious, practical, quick off the line and will pull your speedboat up to the cottage no sweat. With its Passport, Honda understood that a good recipe works, no matter how recycled it is.