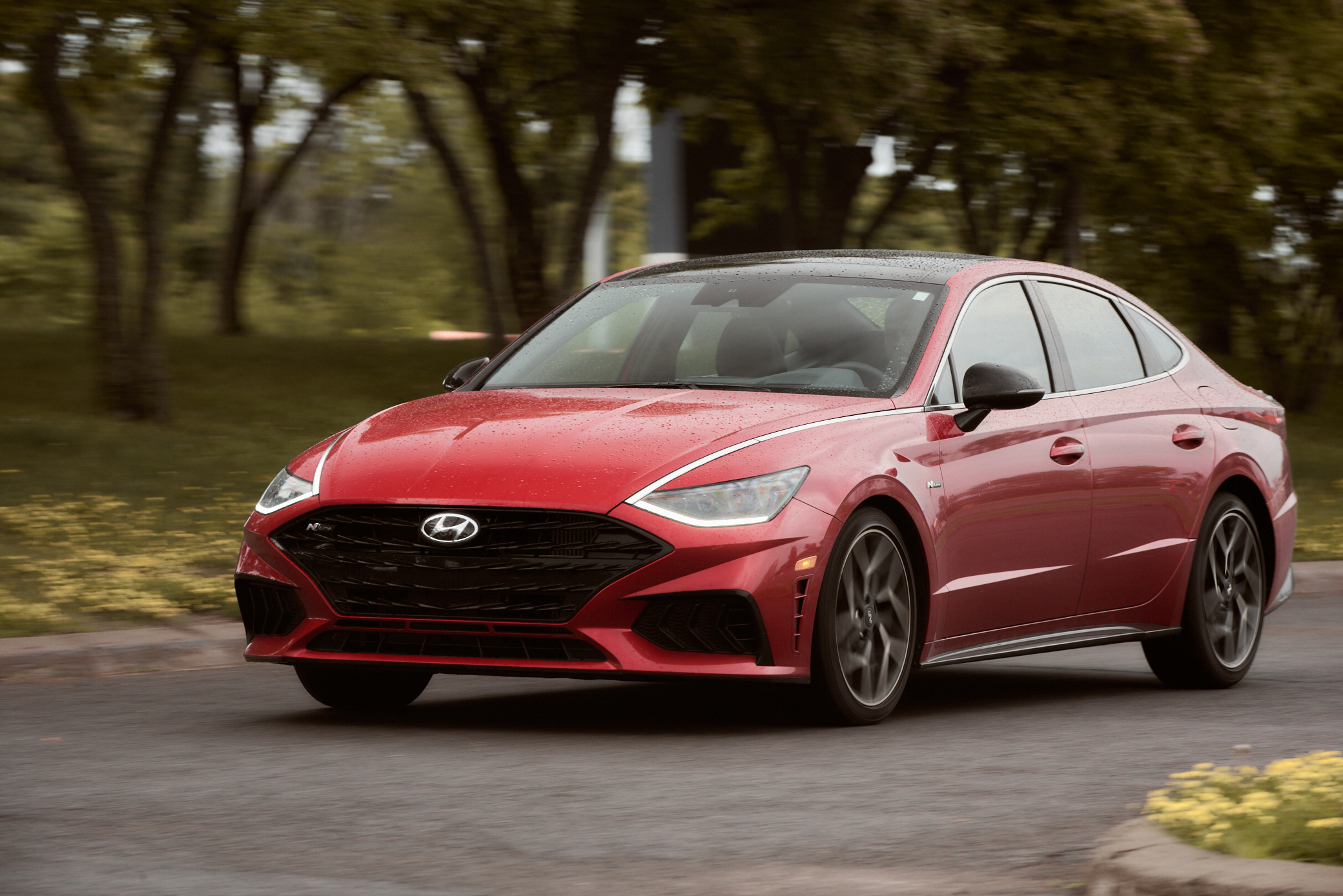 The 2021 Hyundai Sonata N Line is a car I was genuinely curious to drive, but somehow never had a chance to get to it. I had read about how much horsepower it sent to the front wheels and how stupidly fast it was compared to other midsize sedans. My journalist colleagues even said that although it’s essentially the same car as a Kia K5 GT minus all-wheel drive, the Sonata drives and feels like its own unique product. I’m here to tell you it does, but it’s also all very weird. 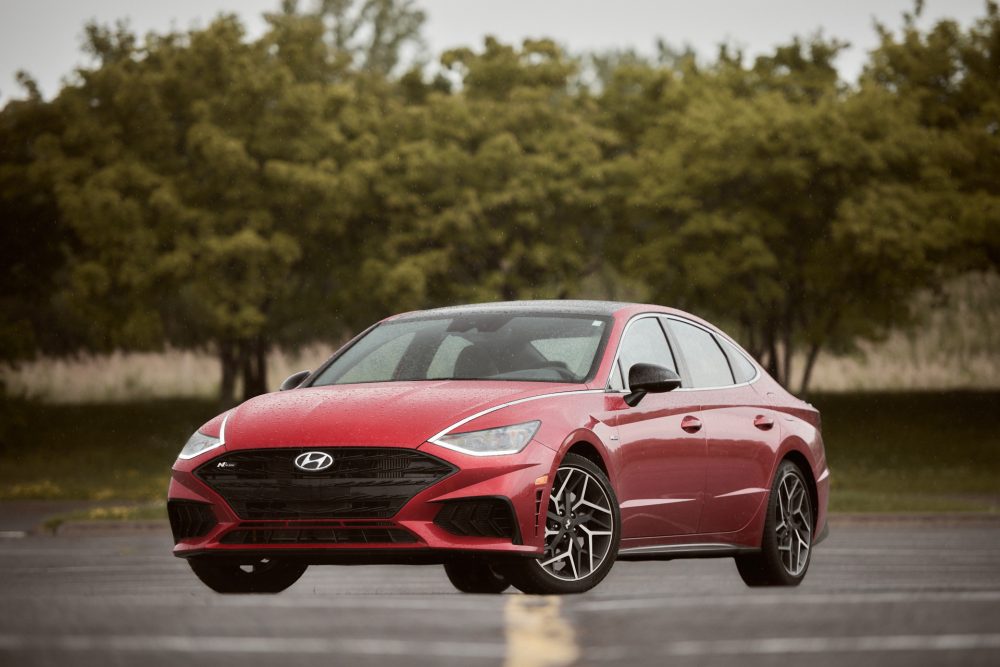 The irony about the new Sonata is that although I was among the first journalists in the world to see it back in 2018 when I visited Hyundai’s design studios in South Korea, I’m one of the last journalists to review it. I’ve just been super busy these days. The reason I’m saying this is when Hyundai’s lead designer Sang Yup Lee pulled the drape off of the Sonata’s original concept vehicle before my eyes, I remember it being a big deal that the front metal strip extended all the way back to the A pillar. 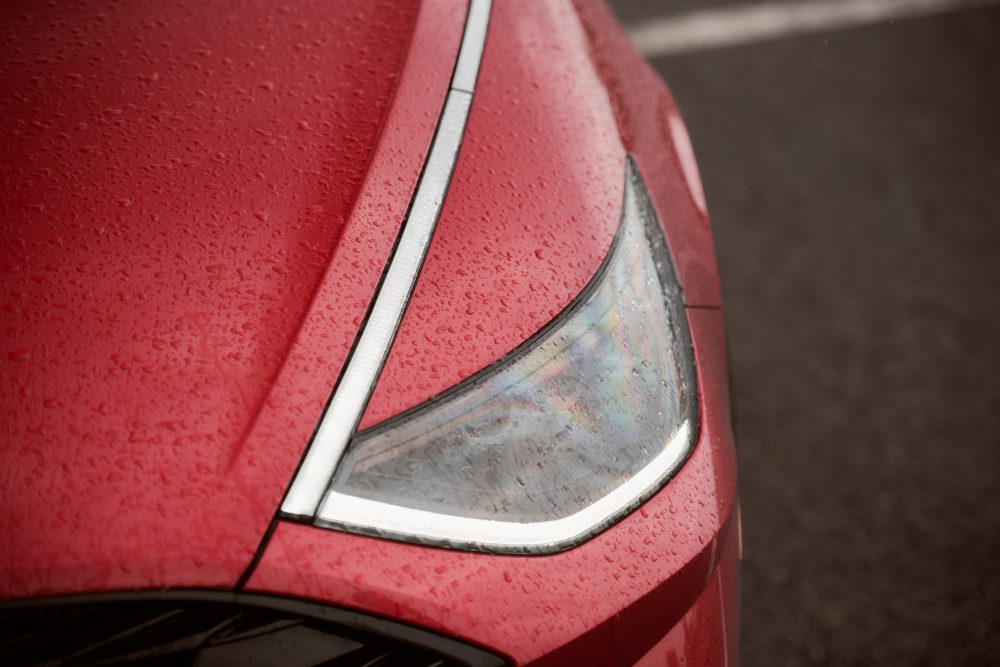 I also remember Mr. Lee telling me that the LED inside that strip was the beginning of things to come in the automotive industry. Yet, when I saw the first production Sonatas on the road, it ended up not looking that good. While the Sonata’s elongated lines and massive catfish snout appeared modern and sleek in Hyundai’s design studio, it just looked off out there the wild. 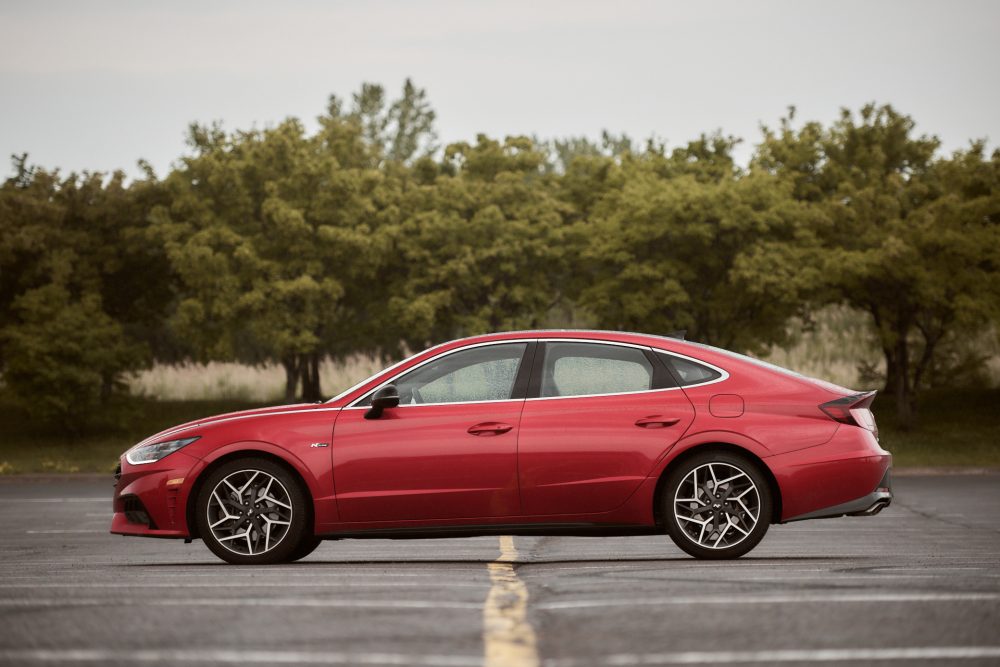 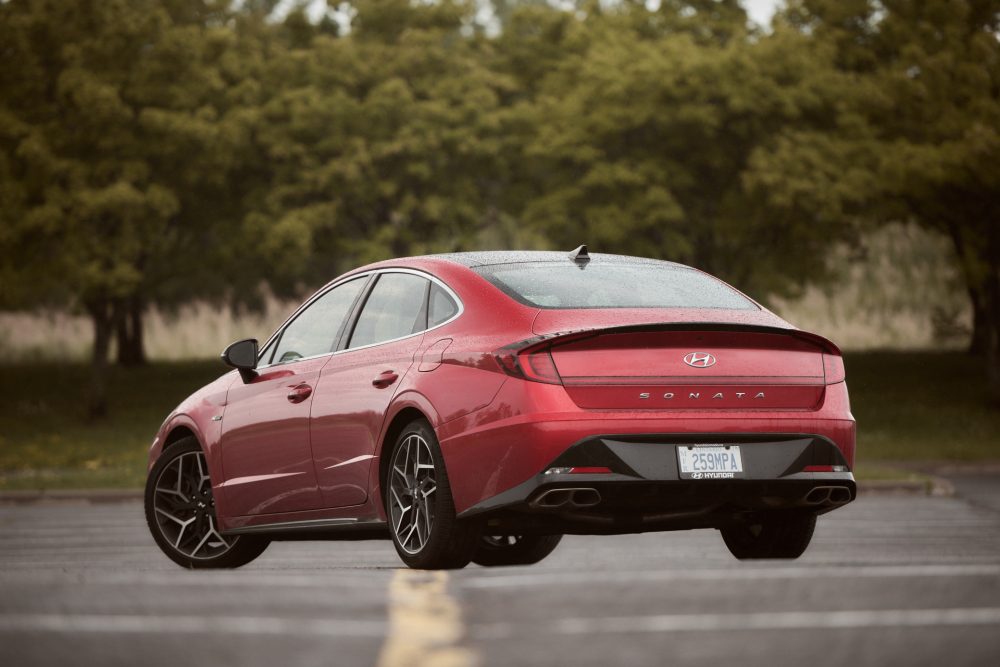 At this point you’re probably wondering what a Sonata N Line is. No it’s not something as wild as a Hyundai Veloster N, but it’s pretty darn close. It also probably means that a “real” Sonata N is on its way, but that’s still unclear. The N  Line package is nevertheless pretty darn convincing. Very much like the wild Toyota Camry TRD I drove last year, this is the most extreme Sonata currently on sale. The chassis was pretty much left intact, but the suspension tuning is – according to Hyundai – “sport tuned” and so is the exhaust. 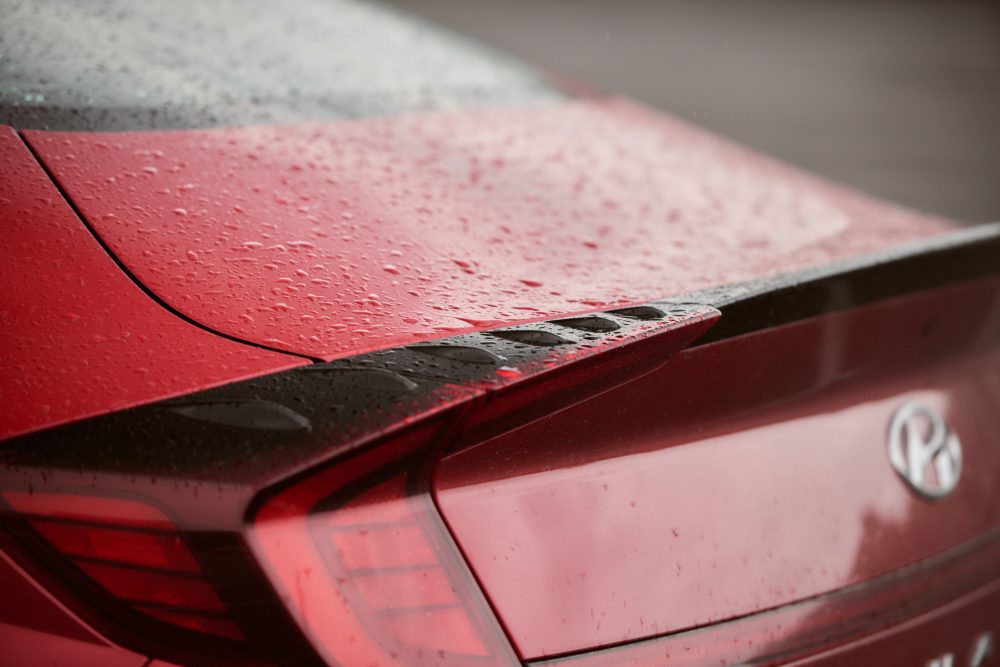 It’s really what’s underneath the hood that turns this normally lukewarm midsize sedan into one hell of a hot rod. Hyundai took its 2,5-liter four-cylinder, fortified the block, integrated its exhaust manifold into the cylinder head, lowered the compression ratio from 13.0:1 to 10.5:1, and bolted on a turbocharger to fill the intake with boost. The end result is a stout 290 horsepower and, more importantly, 311 lb-ft of torque at 1,650 rpm. 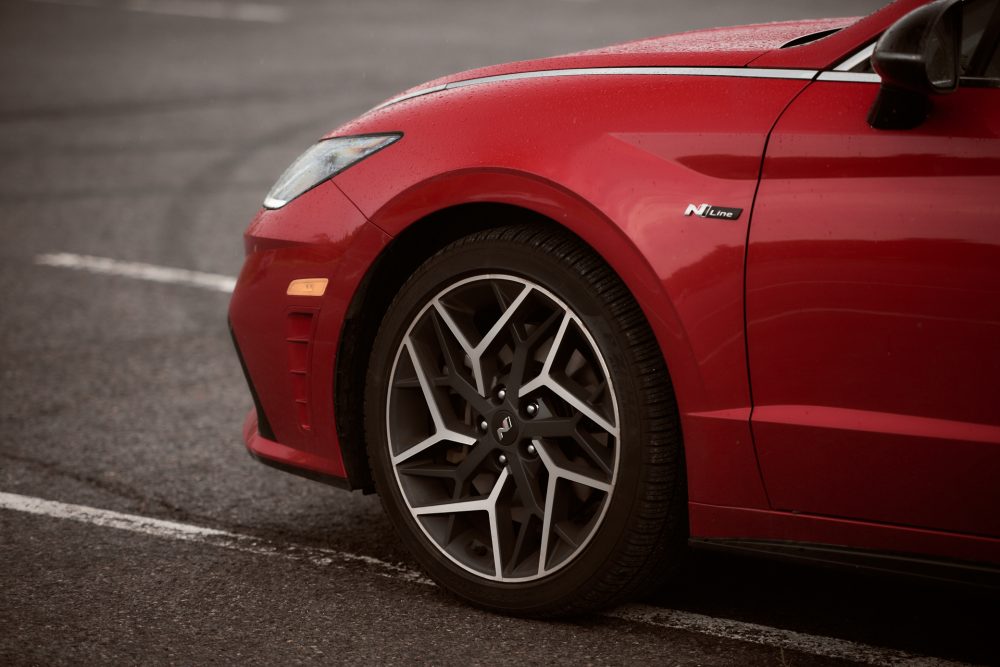 All of it is mated to Hyundai’s dual-clutch eight-speed transmission that’s also available in the Veloster N. It has a wet clutch pack and tightly spaced first four gears for improved acceleration. Oh, I almost forgot: the Sonata N-Line is front-wheel drive. Yet, Hyundai still engineered a launch control program which limits boost during launch to mitigate torque steer and wheelspin. How’s that for being all silly and fun? This leads to a 0-100 km/h time of five seconds flat, making this the quickest front-wheel drive midsize sedan currently on sale.

How much does a 2021 Hyundai Sonata N Line cost? It kicks off at $39,999 and there aren’t that many options available, except for $200 paint jobs. You can even get one in yellow! 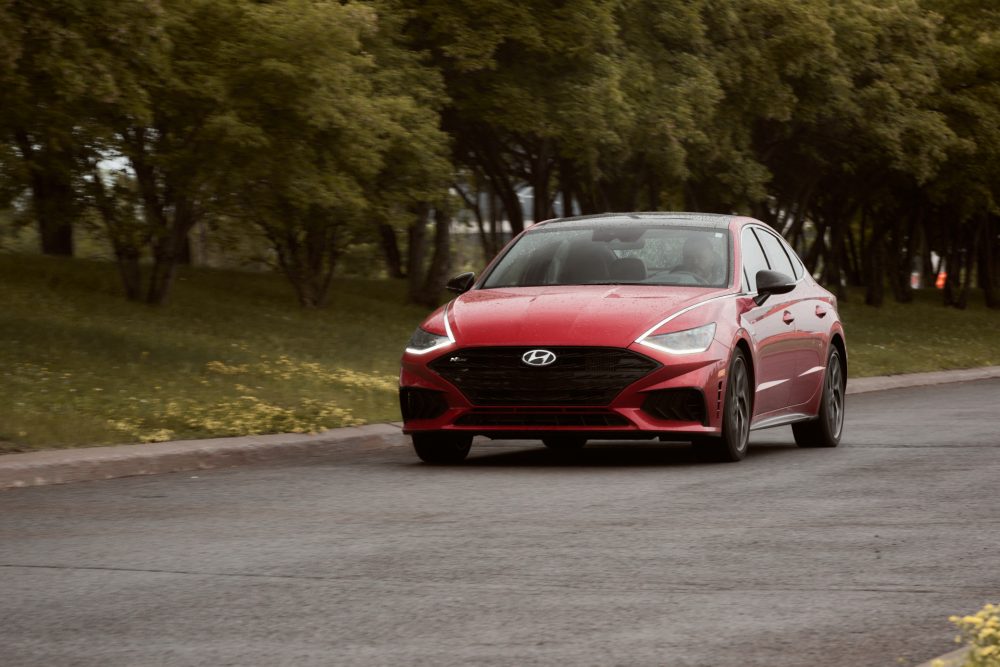 As you guys know, I love cars that have character. This is why this Sonata N Line made me grin. Having so much power being sent through the front wheels in such a large sedan is a little dumb, yes, but also hilarious. Turn traction control off, and the Sonata N Line instantly transforms its front tires into blue smoke. And because it’s fitted with an open differential, it doesn’t handle that power particularly well in the corners. Punch it a bit too much when the front wheels are turned, and you’ll quickly hear those poor tires squeal. 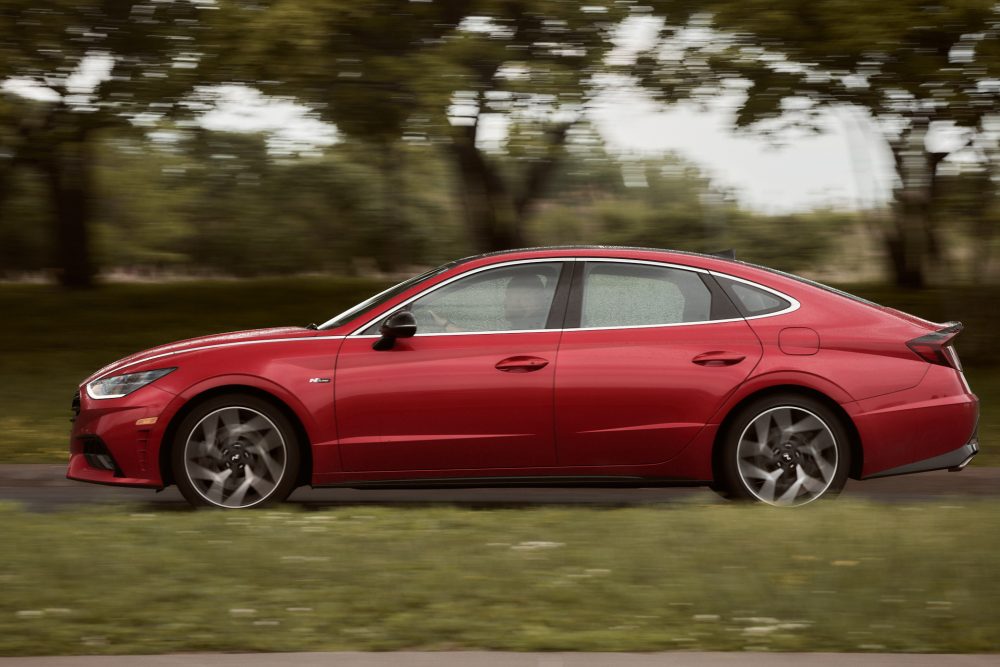 This also means that a less powerful all-wheel drive sedan will destroy this thing during a launch. But catch the Sonata N Line during a rolling start or out on the freeway, and you’d better be driving something quick, because this Hyundai sure can hustle. 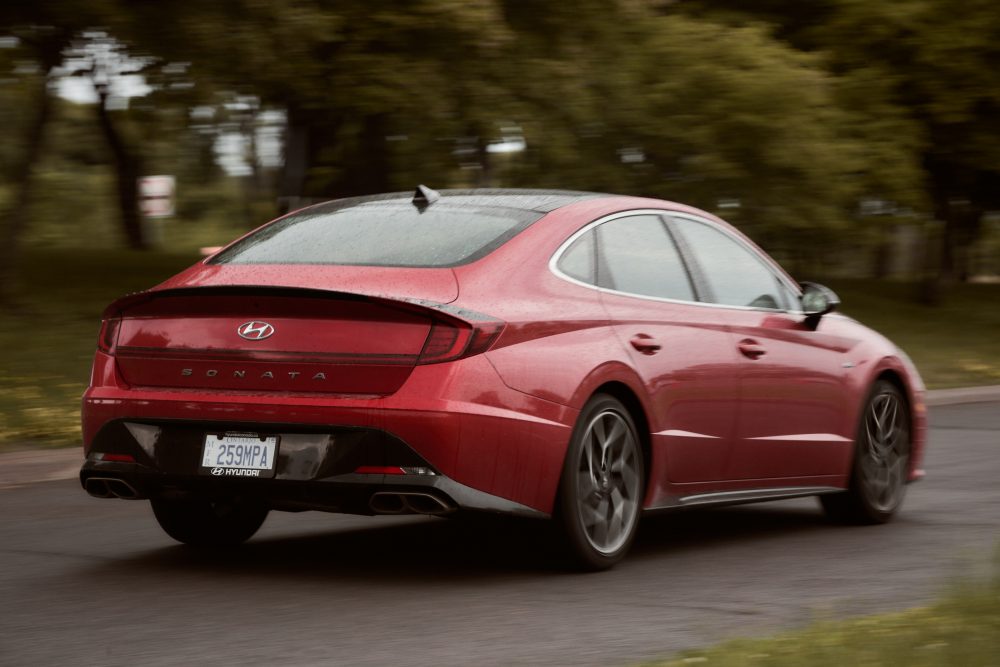 Punch the accelerator pedal in Sport+ mode, and the Sonata N Line briskly shuffles down a few gears, but never as quickly as say Volkswagen’s DSG or BMW’s ZF setups. While quick, Hyundai’s dual-clutch seems to have been calibrated for casual performance rather than neck-snapping acceleration. So there’s somewhat of a delay. But once the right cog is selected and the turbo has spooled up, the big four comes alive, and the Sonata simply flies. The amount of torque this engine generates at full steam is downright ridiculous. In the blink of an eye, you’ll be travelling at German sport sedan speeds. Luckily, the brakes are solid enough to bring this big girl to halt in a jiffy. 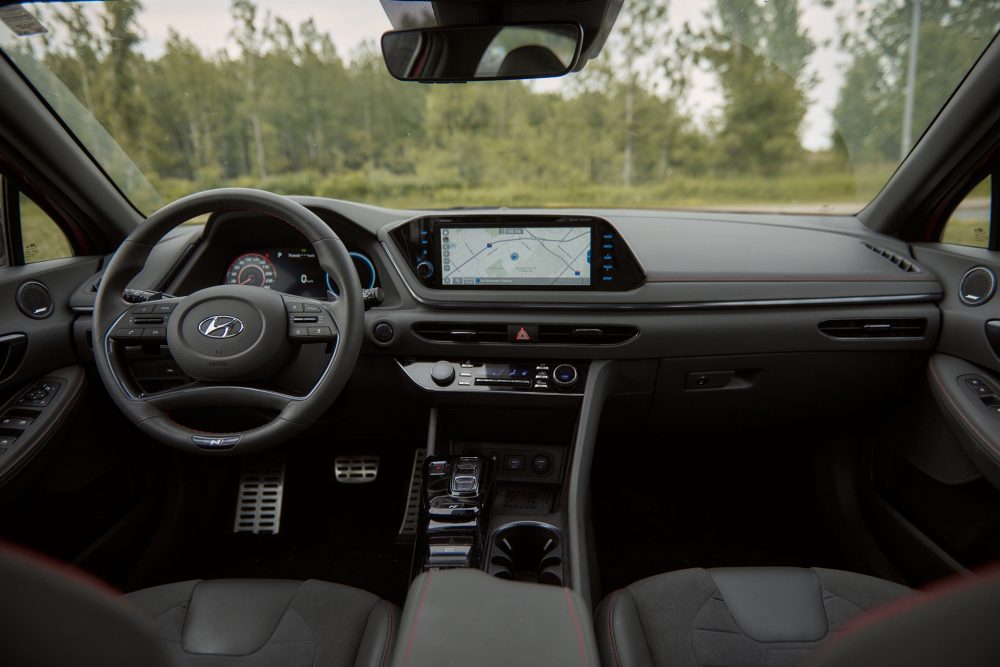 If you find the Sonata looks polarizing, wait until you see its interior. I’m personally not a fan of the way the steering wheel was designed or how organic everything feels inside. I much prefer spartan, angular dashboard setups. But build quality in the Sonata is class-leading, seat comfort is superb and rear passenger room is hands down up there among the best in its class. I drove the Sonata N Line from Montreal to Toronto for a press event and it proved to be one heck of a smooth highway cruiser. I’m also going to say that Hyundai’s HDA semi-autonomous driving aid is one of the most consistent systems I’ve ever sampled. 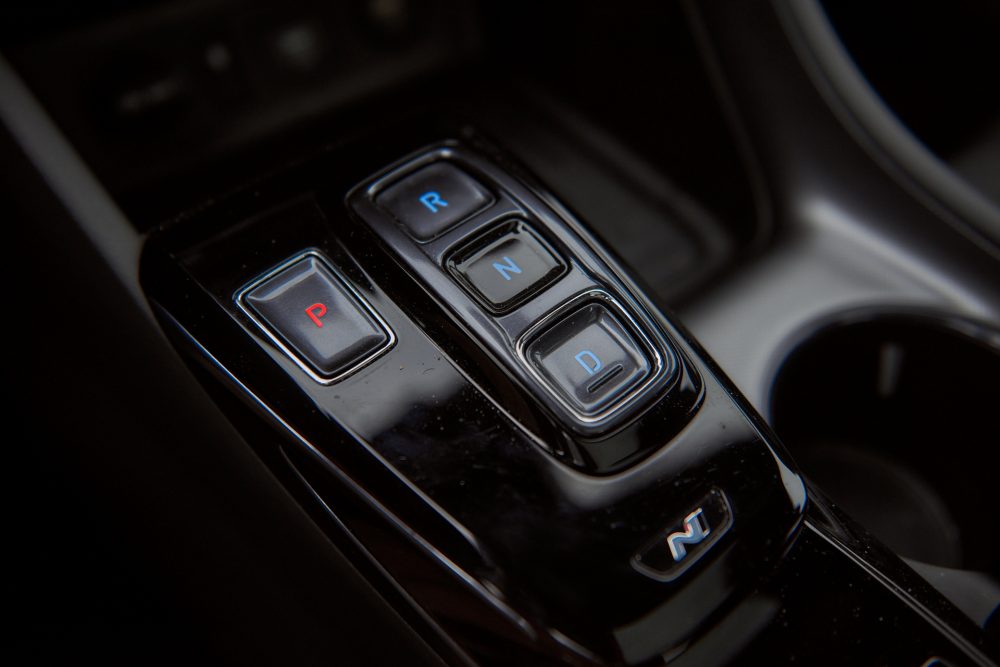 Sadly, the Sonata is plagued with the same ergonomic issues as modern Hyundai vehicles, more particularly the all-new Tucson. The large transmission buttons, with P being offset to the left, are confusing, and for some reason, Hyundai’s latest infotainment interface is much more complicated to comprehend than its predecessor. 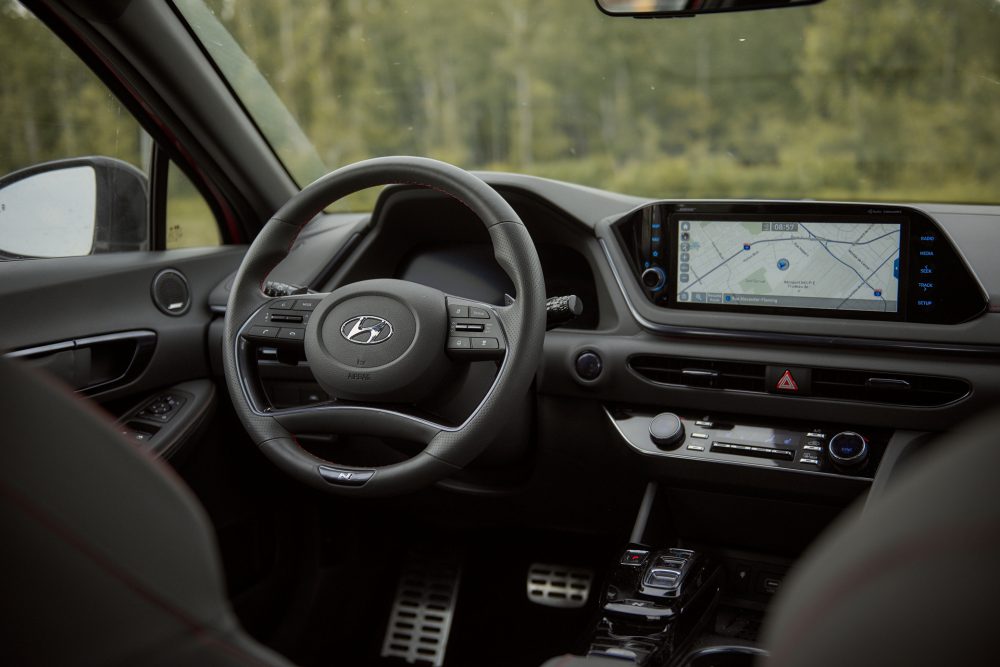 Tasks that would once take milliseconds to complete now require extra steps, and changing radio stations requires having to rely on the Seek touch control instead of a good old physical knob. This, by the way, the fact that new systems become worst than the old ones, is a common problem in the entire industry. 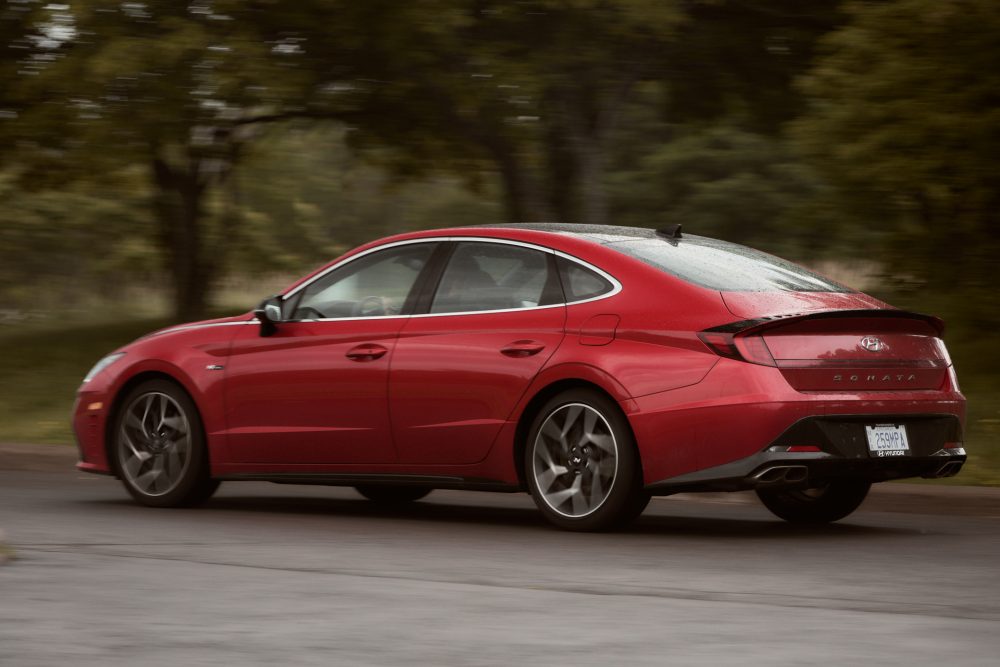 Final verdict for the 2021 Hyundai Sonata N Line? Definitely fun and bonkers quick with an overdose of character and a lot of silliness. Is this car necessary? Absolutely not, and at 40 grand, it’s not everyone’s cup of tea. Hey, sedans are dying anyway, so why not have a bit of fun with them before they disappear?