The 2020 Lamborghini Huracan Evo Spyder marked my first-ever experience behind the wheel of a Lamborghini. Hell, it was about time. And the best part is that it was exactly how I expected it to be. Look, I’ve driven many fast and flamboyant automobiles in my career, but none of them even come close to Lamborghini’s ability to inflate its driver’s ego. It reminded me why I aspired to become an automotive journalist in the first place.

The Baby Has Grown 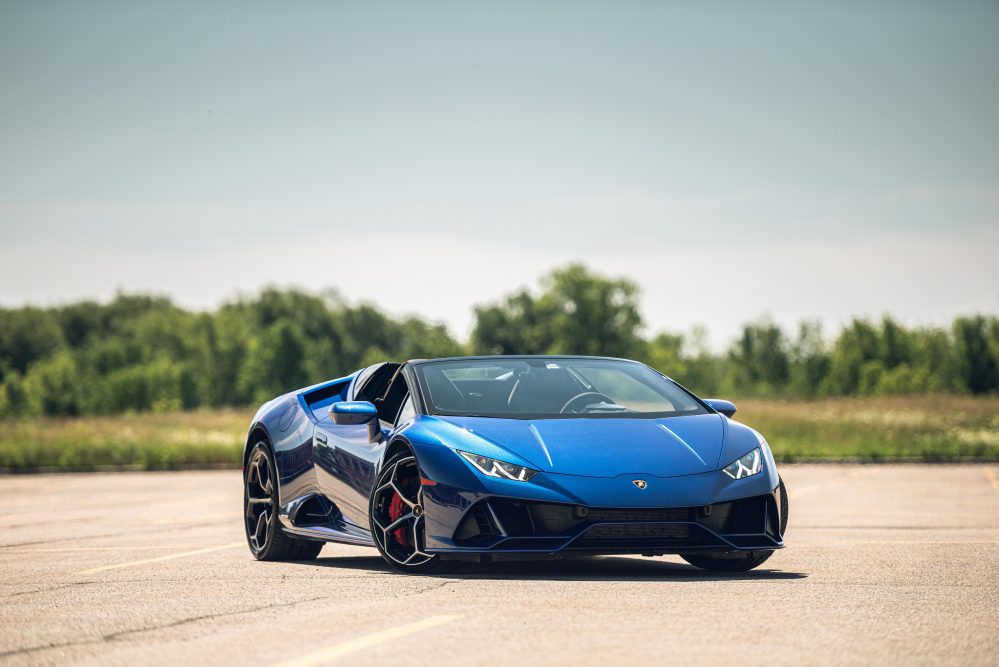 the 2020 Lamborghini Huracan may be Lambo’s baby supercar, but that doesn’t prevent it from being a highly precise performance tool. As a matter of fact, this Evo is arguably the wildest Lamborghini yet, even if it’s based on the entry level model. 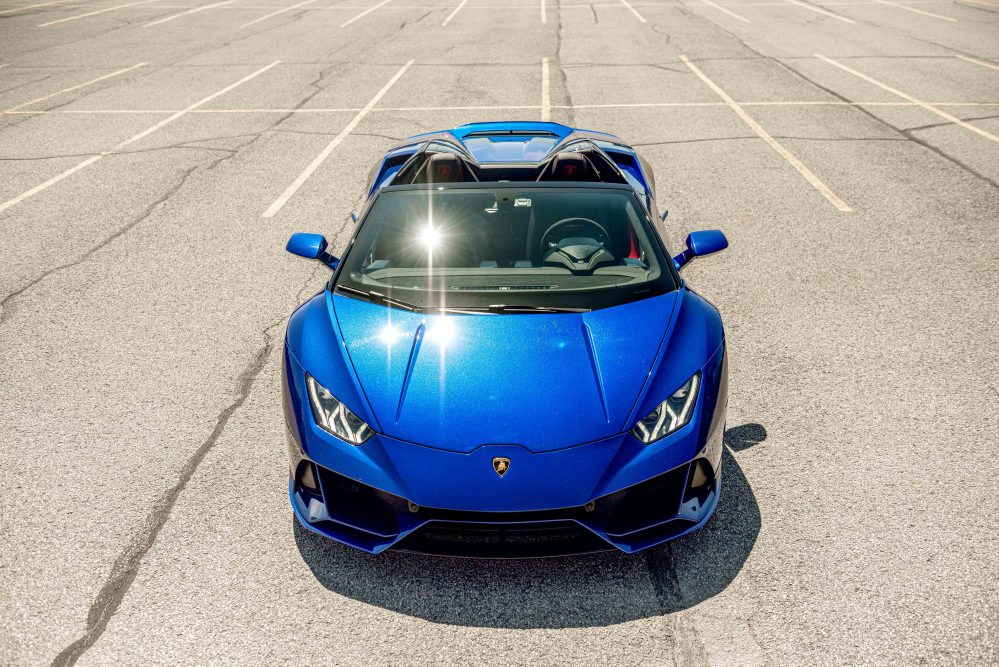 The Evo name means precisely that: an evolution of the beast, or if you prefer, the first ever facelift for the Huracan since it first hit our market back in 2014 as a replacement to the Gallardo. As a matter of fact, all Huracans are called Evo now, meaning that the baby Huracan is now more powerful, faster, louder and more intense than ever. 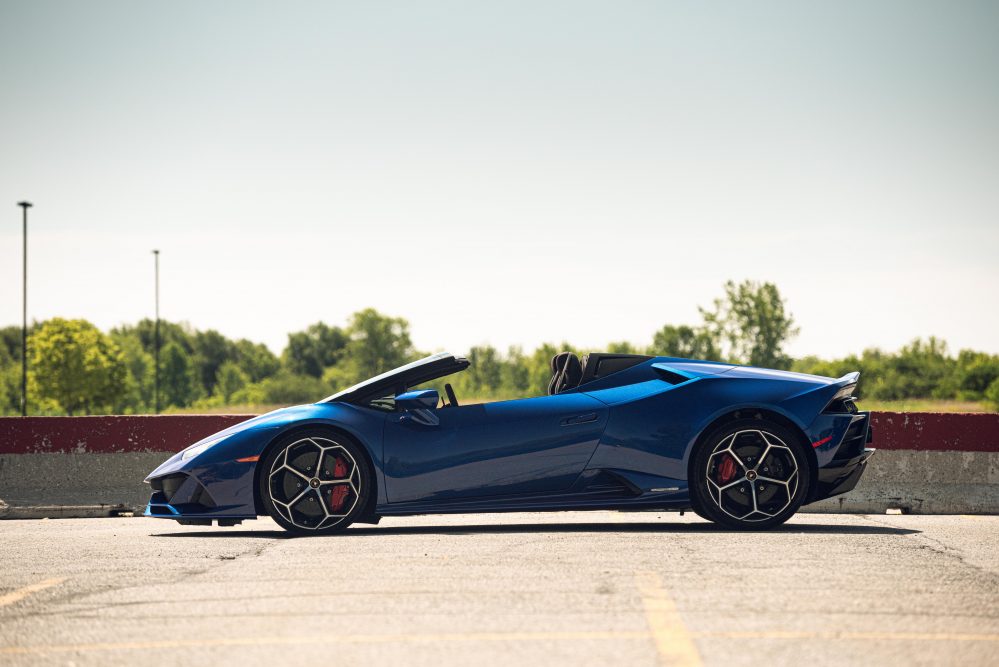 Power for the 2020 Lamborghini Huracan Evo Spyder comes from a revised version of the 5.2-liter V10. Taken straight out of the Huracan Performante, it bumps things up from 602 to 631 horsepower. Torque also sees a slight increase, from 413 to 443 lb-ft. It’s all mated to a seven-speed automatic gearbox. 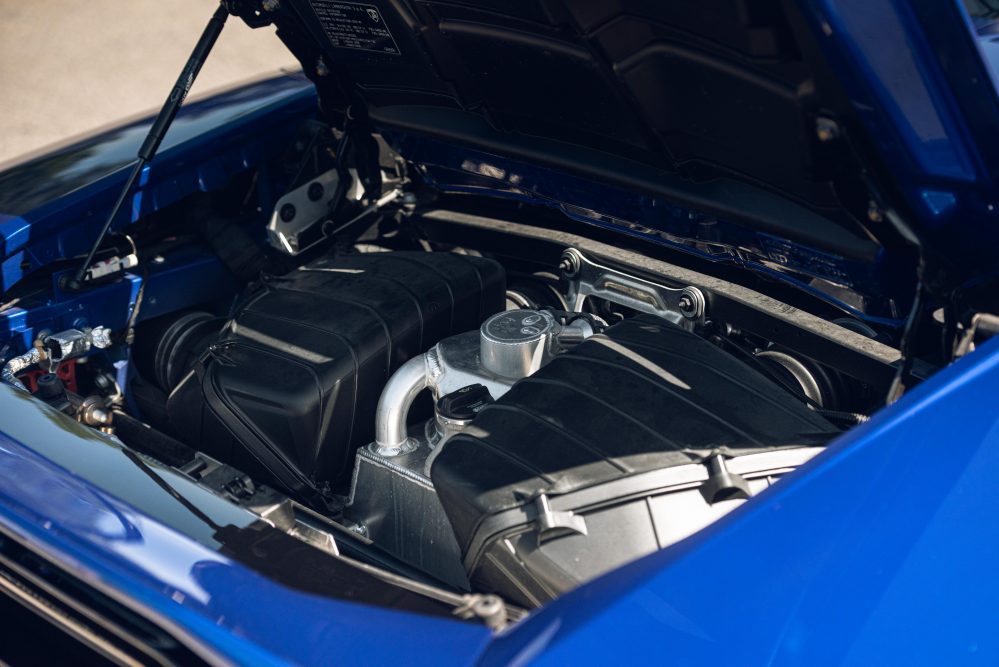 And while the Evo retains the old Huracan’s all-wheel-drive system, all-wheel steering is now part of the equation. All this equipment allows the hyped up Huracan Evo – roofless or not – to launch to 100 km/h from a standstill in just about three seconds flat, hit the quarter mile in 10.5 seconds and reach a top speed of 325 km/h. Not bad for the “cheapest” model. 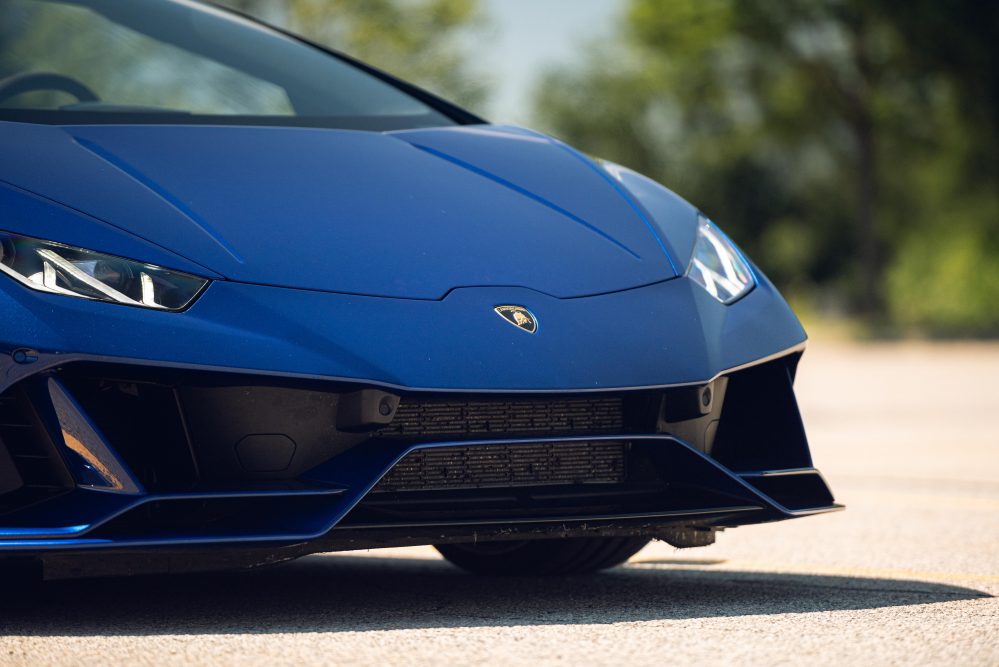 The Evo makeover opens up the Huracan’s face courtesy of a new bumper with integrated splitter and enlarged air intakes that actually improve aerodynamic performance. Out the rear, the car gets the Performante treatment with high-mounted sports exhausts, an integrated spoiler, and a rear diffusor that also increases downforce. New wheels  help distinguish the Evo from past Huracans. 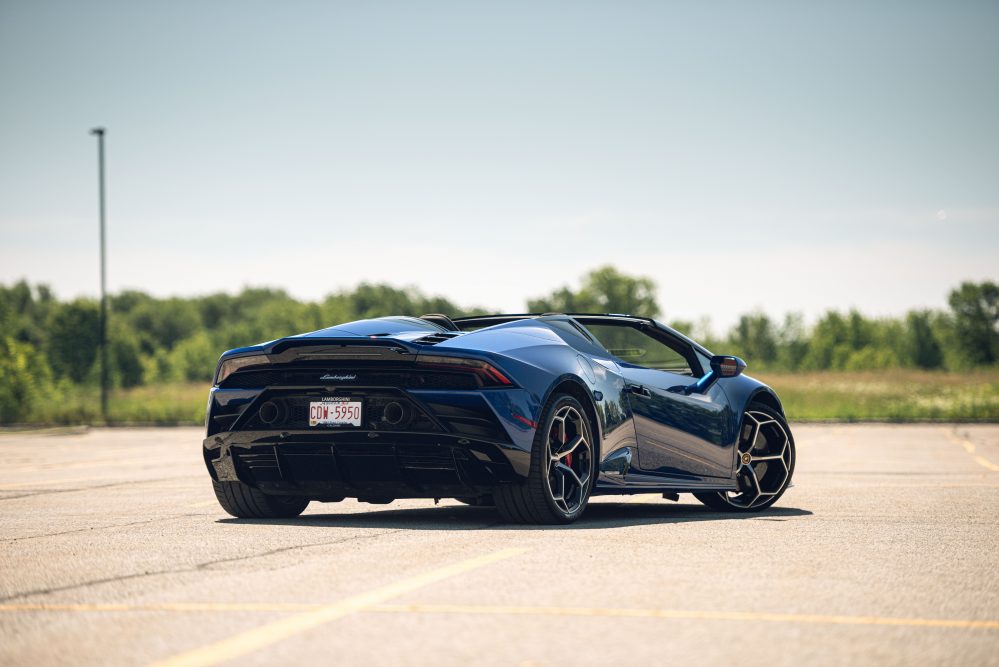 At this point you’re probably wondering how much this open-top Italian superbull costs. This is actually where things become even more wild. As expected, a Lamborghini is expensive, and the Huracan Evo is no exception. But wait until you get a hold of this. Base price is $336,258, but perhaps even more impressive are the options that were grafted onto my tester. 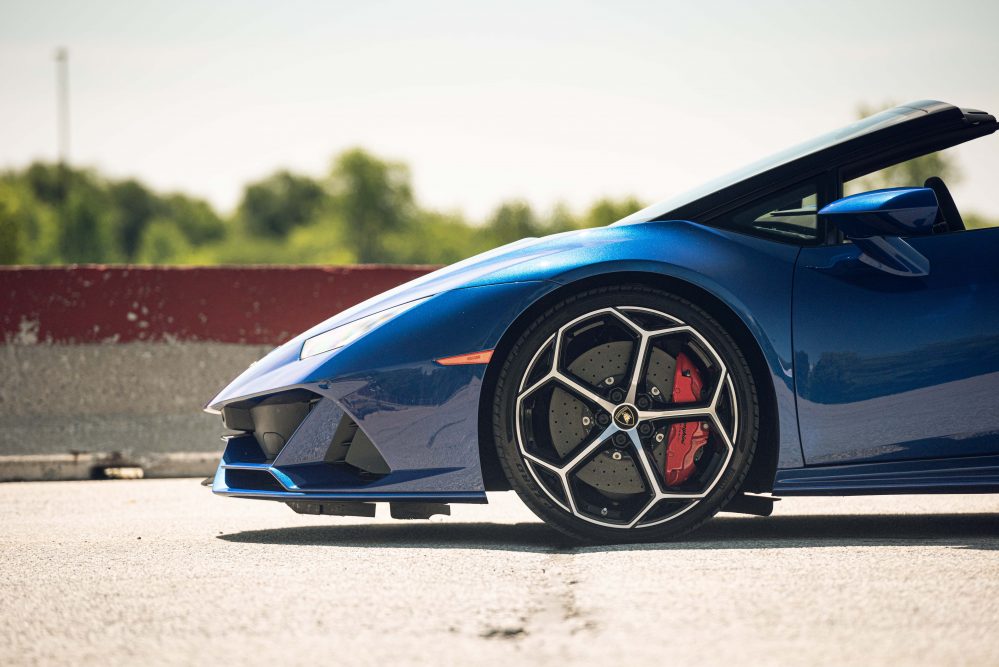 That blue paint, the one Lambo calls Blu Sideris, is an $18,900 option. Jesus! The wheels, well those are an extra $4,500 add-on. My car also had the optional telemetry package, which adds a set of cameras on the car to record your lap times, because why not. That’s another $7,100. Imagine. As it sits here, the Evo stickers for a staggering $421,658. 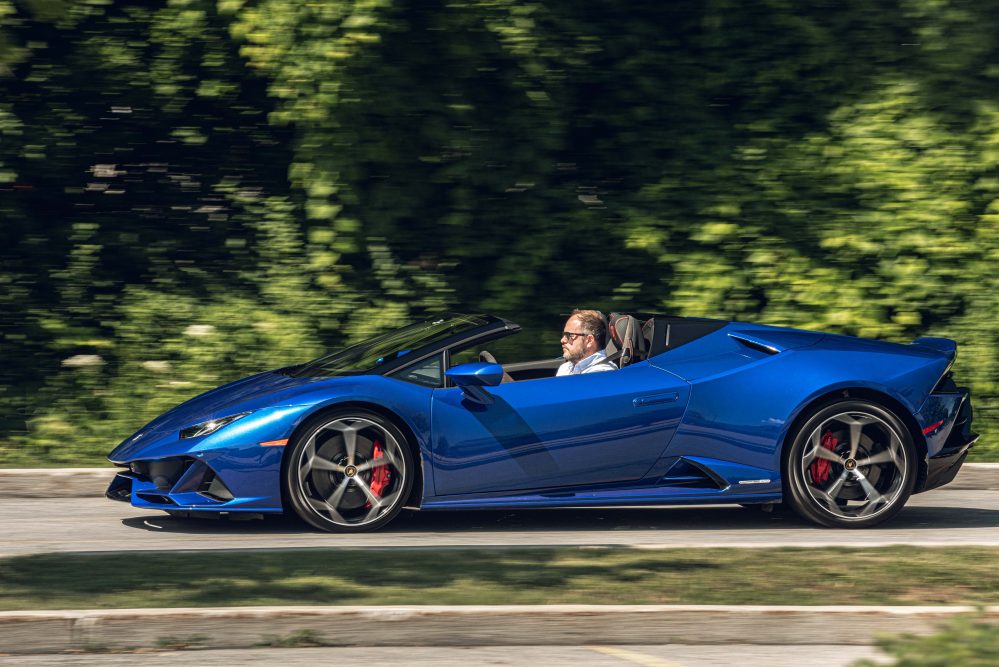 Perhaps where the 2020 Lamborghini Huracan Evo Spyder impressed me the most wasn’t how brutally fast and surgically precise it was, but how quickly it attracts people’s attention. Everywhere I went with this thing, I got positive stares, thumbs up movements and cell phones targeted in my direction. If you’re looking for attention, this is the car you need. 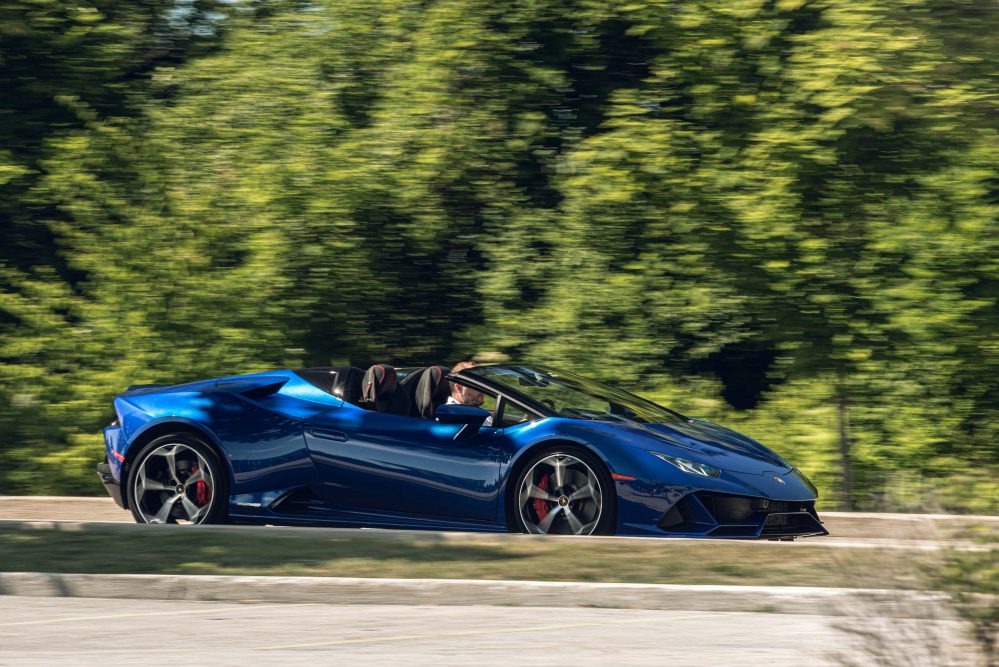 It’s a bit embarrassing, actually, especially considering that the topless situation had everyone, and I mean everyone see my face. As Jeremy Clarkson once said: you need to be as good-looking as the car itself if you’re going to opt for a convertible Lamborghini. Or else, there’s just no point to even consider buying one. 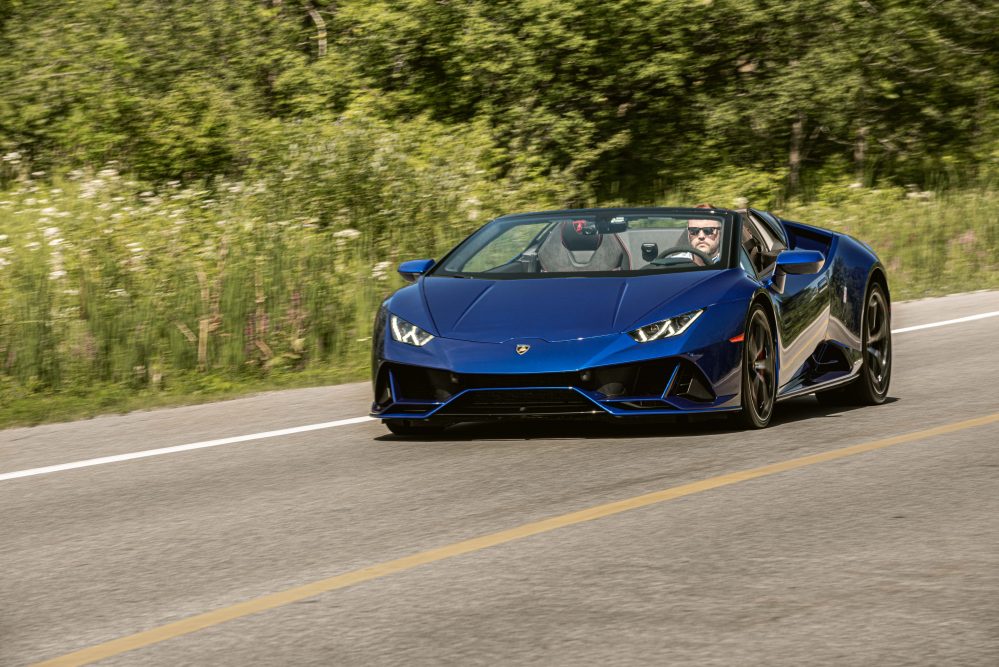 At least, people are genuinely happy when they spot a Lamborghini. In many cases I made peoples’ lives a lot more fun for short instances, especially kids, who went downright berzerk around its presence. I tell you, it feels fantastic to see a young one live its childhood fantasy, in this case sit inside a life-sized Lamborghini. 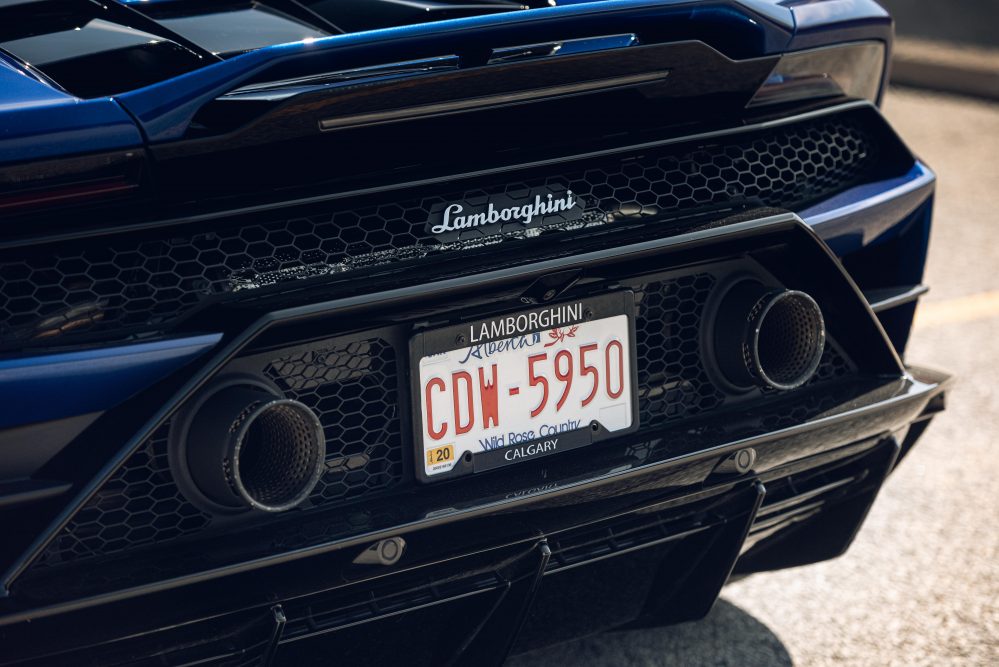 But fundamentally, what you guys need to know is how the Huracan Evo drives. It’s crazy guys; a highly sensorial experience that shoots a solid does of endorphins into your bloodstream within seconds. It’s a hard drugs, a rushing orgasm, ten shooters of tequila. It’s all that in one gulp. 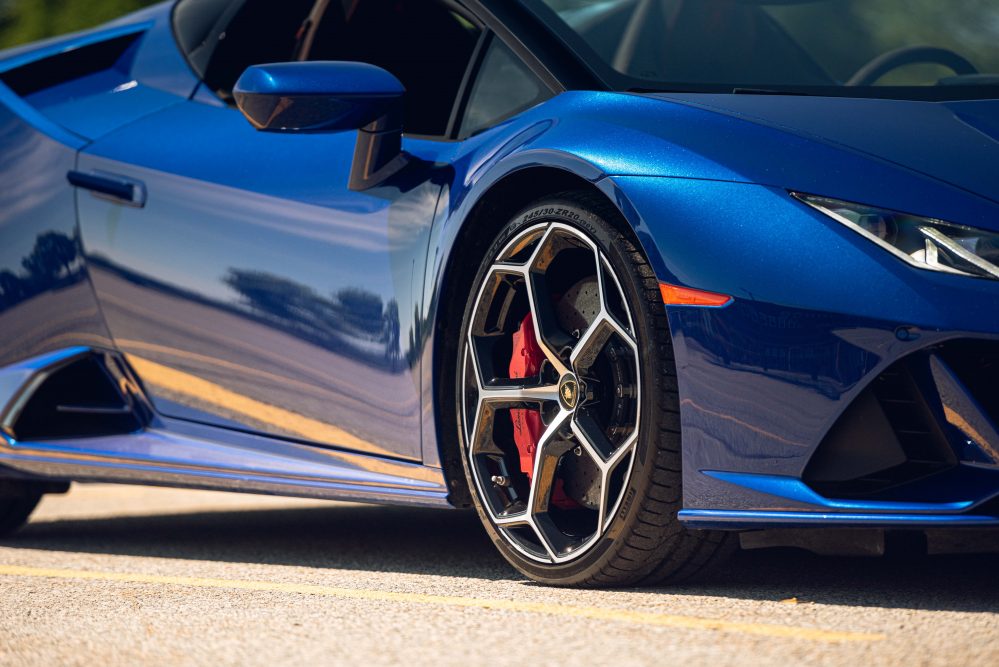 There are three modes in an Evo: Strada, Sport and Corsa, and each of them drastically change the beast’s personality. As a matter of fact, the Evo is an immensely intelligent car, as it’s equipped with a super computer that channels all types of information to a central processor in order to better adapt to your next move. 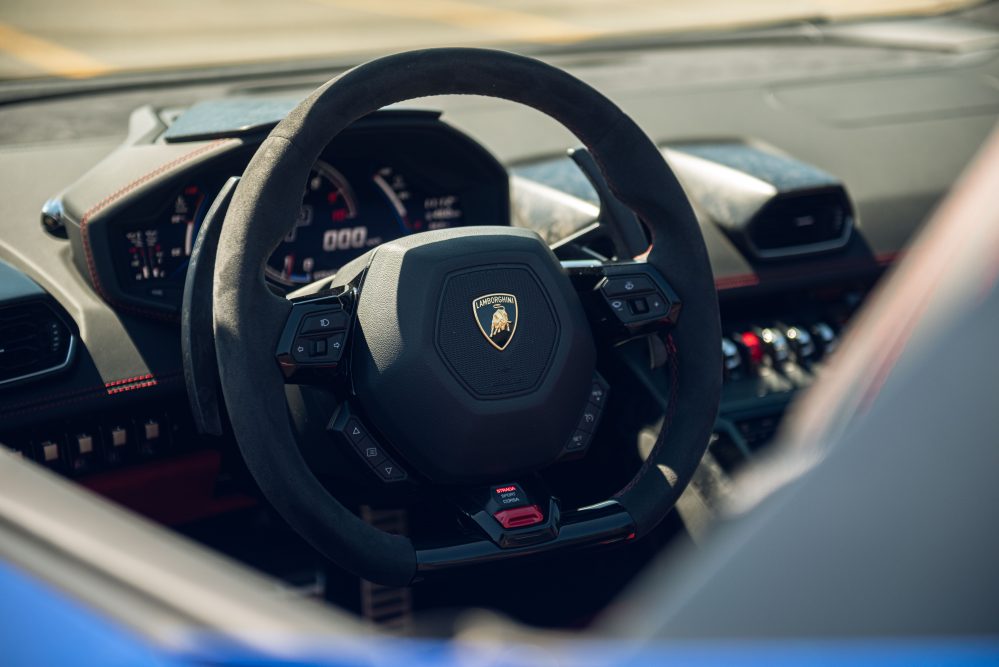 Lamborghini calls it Lamborghini Dinamica Veicolo Integrata (LDVI) and it basically observes everything you’re doing, from how your feet operate the pedals, to which drive mode you prefer driving your bull in. It then sets itself up accordingly. 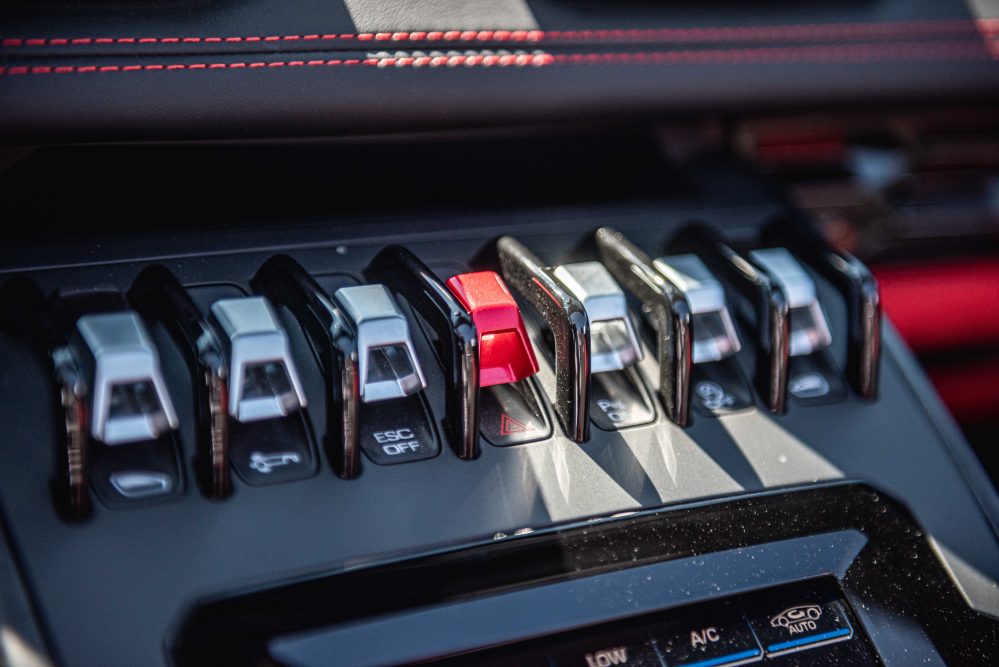 From behind the wheel, it’s honestly kind of hard to feel its effectiveness, but I will say the Huracan Evo is one hell of a precise machine. Addictive, to say the least. 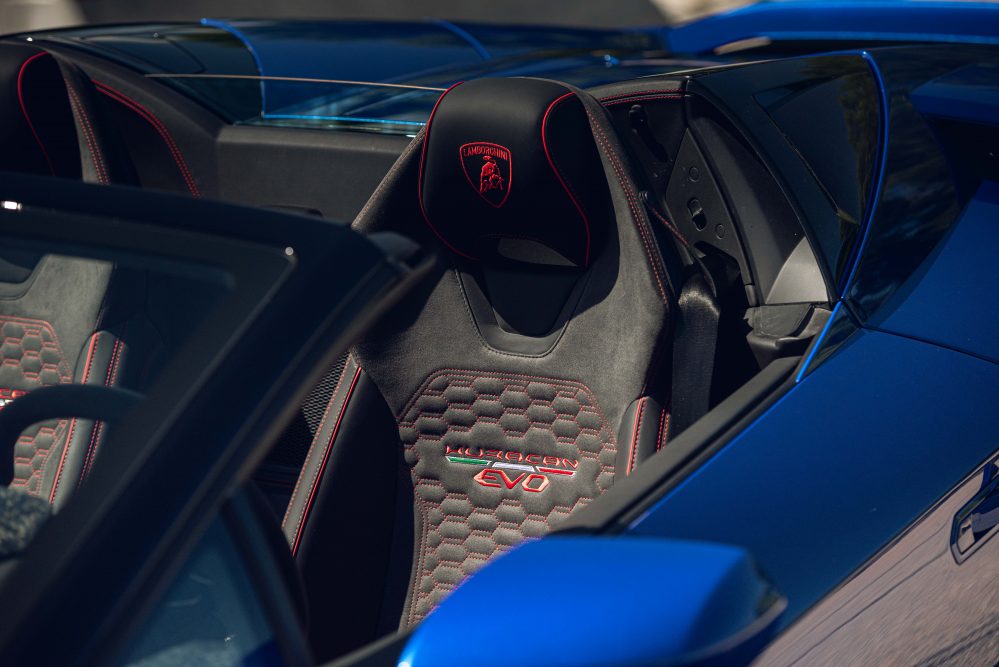 In Strada mode, the Huracan is surprisingly docile and, dare I say, easy to live with. Sure, its cabin is cramped, and its seats aren’t particularly comfortable due to their scissor position and hard bottom, but its suspension is compliant over rough roads and its exhaust is kept wonderfully quiet. Because, no, you don’t always want people to know you’re passing by in a Lamborghini, although it’s kind of hard to ignore this car’s imposing presence on the road. 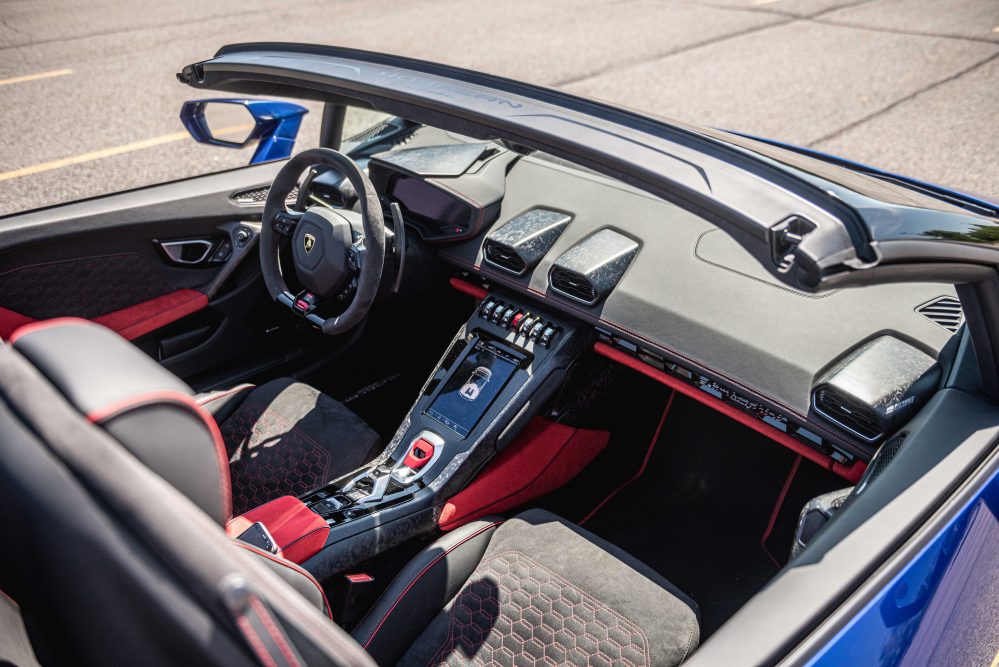 Tall people such as myself will feel awkward in this thing as their head will most likely stick out from over the windshield. The pedals are annoyingly shifted to the right, and there are no cup holders, no apparent storage space to throw your gear. It’s kind of annoying. In other words, it’s still a fuckin’ Lamborghini. 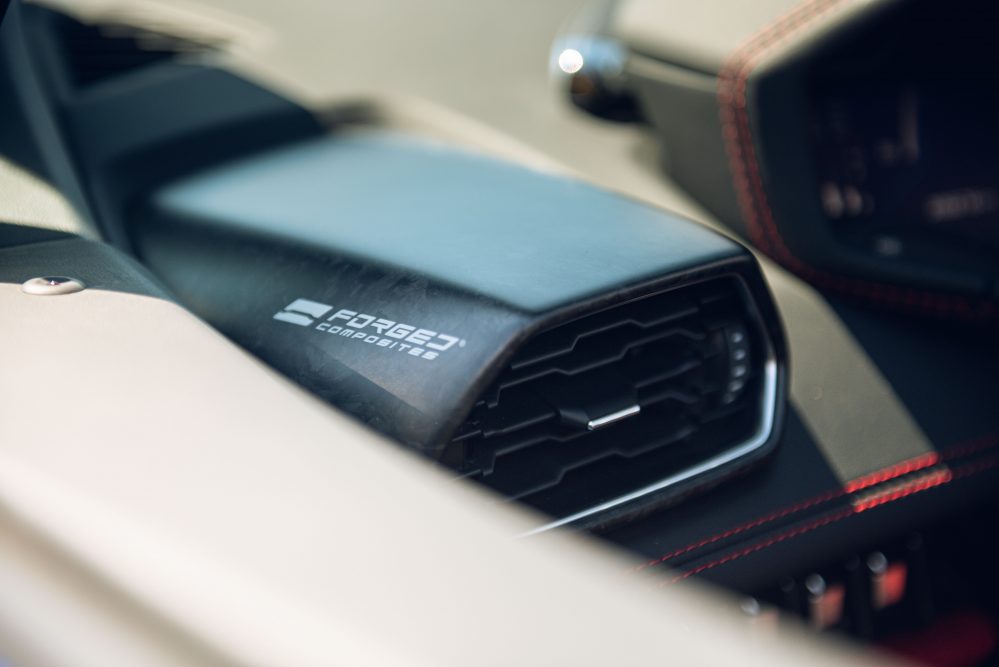 I will say that I absolutely love Lambo’s Forged Composites carbon fiber trim, which is, mind you, another $8,900 option (gulp). It looks like marble and gives the Huracan’s otherwise spartan cabin a uniquely expensive look. However, I do fear it won’t age well. 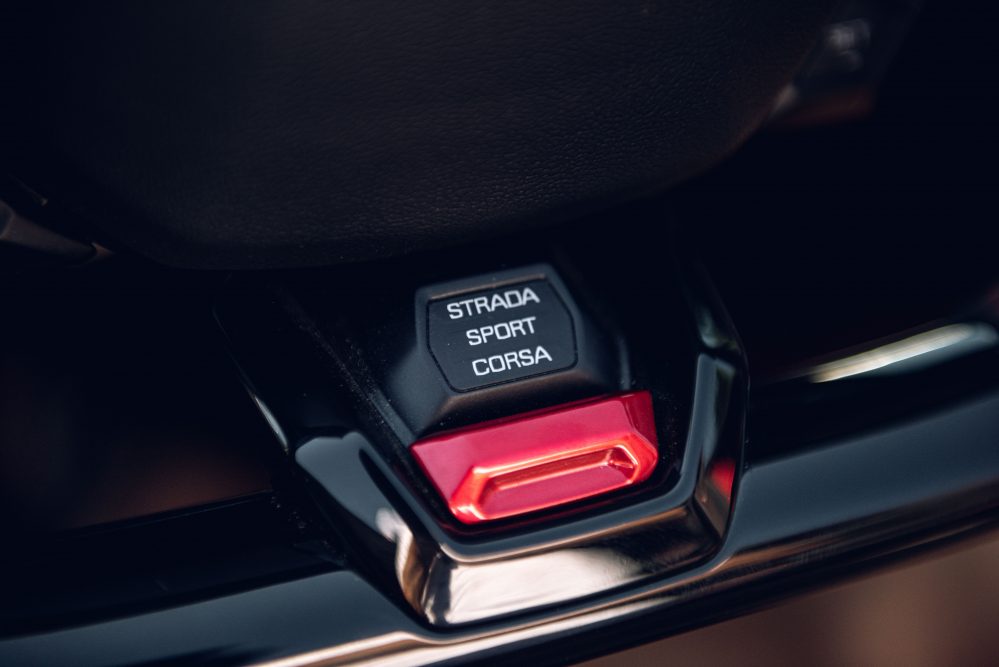 Set the car to Sport mode, and you start to understand the machine you’re driving. Sport mode dials back the traction control system just a tad to allow you to play around with it a bit more, but not so much so as to make things dangerous. Lamborghini calls this the “fun” mode, as it allows the rear to kick out more. 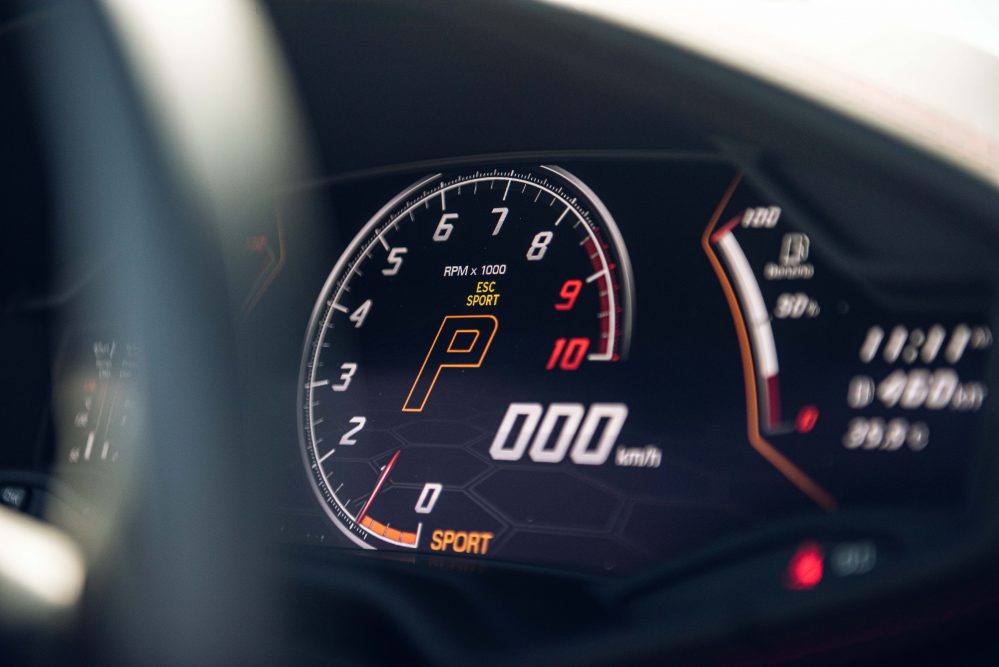 The suspension then firms up, the steering wheel gets a littler heavier and, most importantly, exhaust valves open up to let the V10 sing. What’s more, Lamborghini engineers made sure to add a nice throttle blip the moment you activate Sport mode, so the cars behind you know shit’s about to get real. 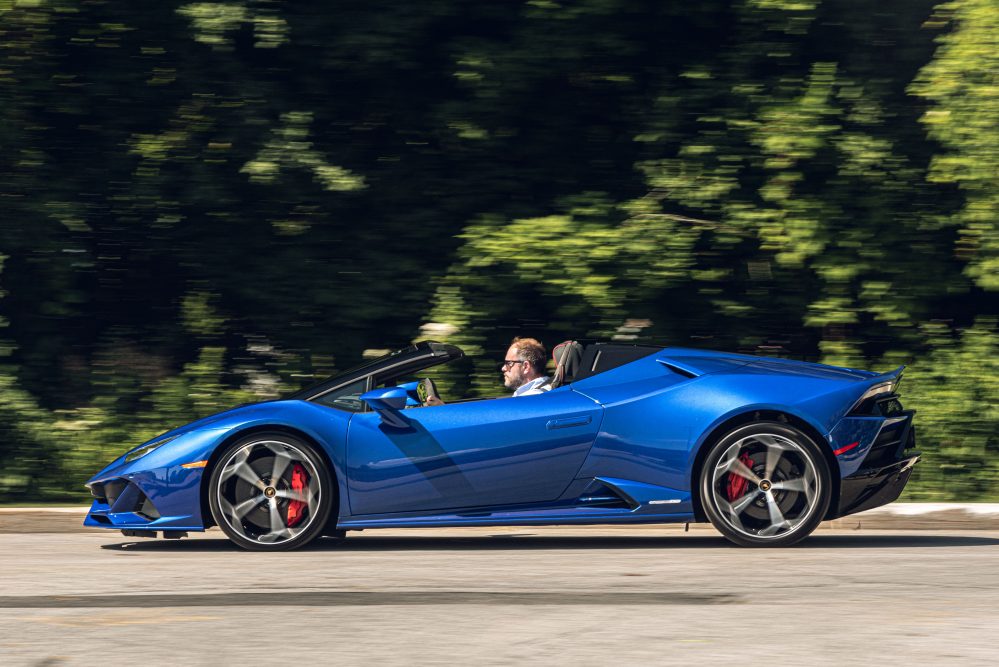 Finally, there’s Corsa mode, where the Evo fires its heaviest artillery. In Corsa, traction control is pushed back even more, the car’s all-wheel-steering system tucks in the rear wheels for ultimate cornering grip, and the two gigantic rear-mounted tubes Lambo calls exhaust pipes spew out even louder sounds. Hold back the left paddle shifter, and the transmission instantly hands you over the ideal gear. Floor the throttle, and the Evo teleports itself to its next destination in the same brutal velocity as a speed bike. 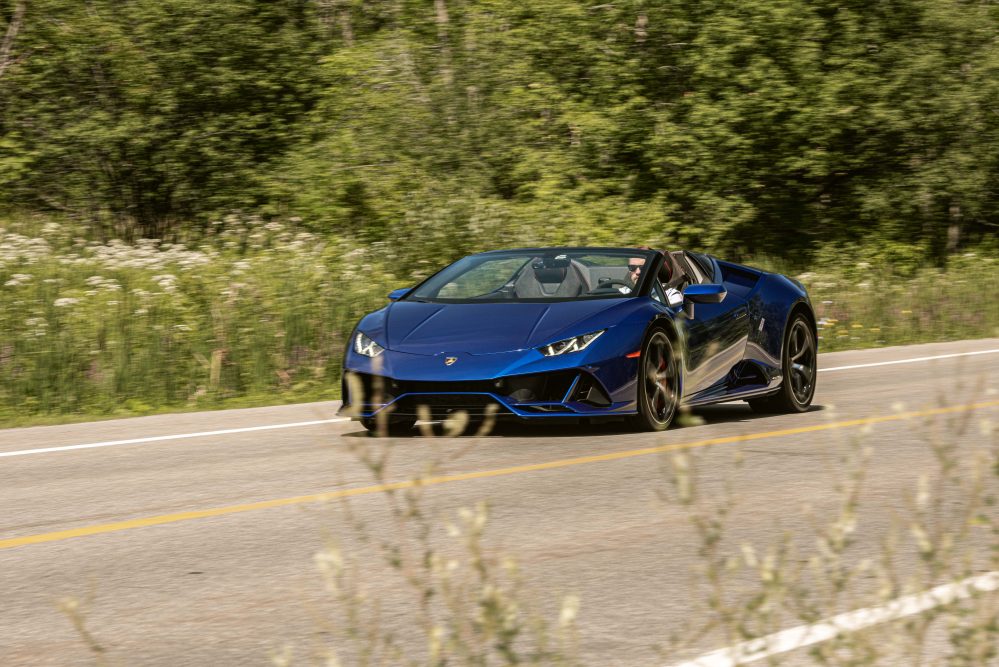 And what an engine! Not only can this V10 rev all the way to 8,500 rpm, it emits one of the most melodious mechanical concertos this side of a Ferrari, reminding you how much better natural aspiration is at delivering an engaging driving experience than turbocharging and hybridization. The biggest benefit of such an engine configuration is how urgently it gains revs, and how quickly you’ll hit the rev counter if you’re not paying attention. 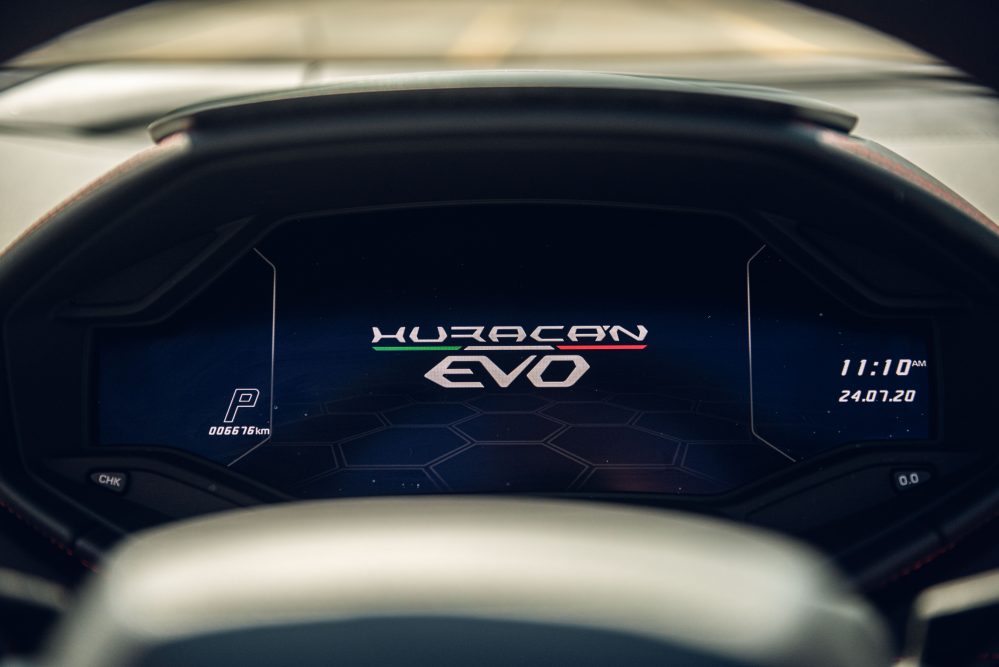 In the Evo Spyder, performance is a wind-filled opera-like theatre act where your sensory receptors get cranked up to eleven. I’ve rarely driven cars with this much character; a machine that made me feel like eight year-old me all over again. 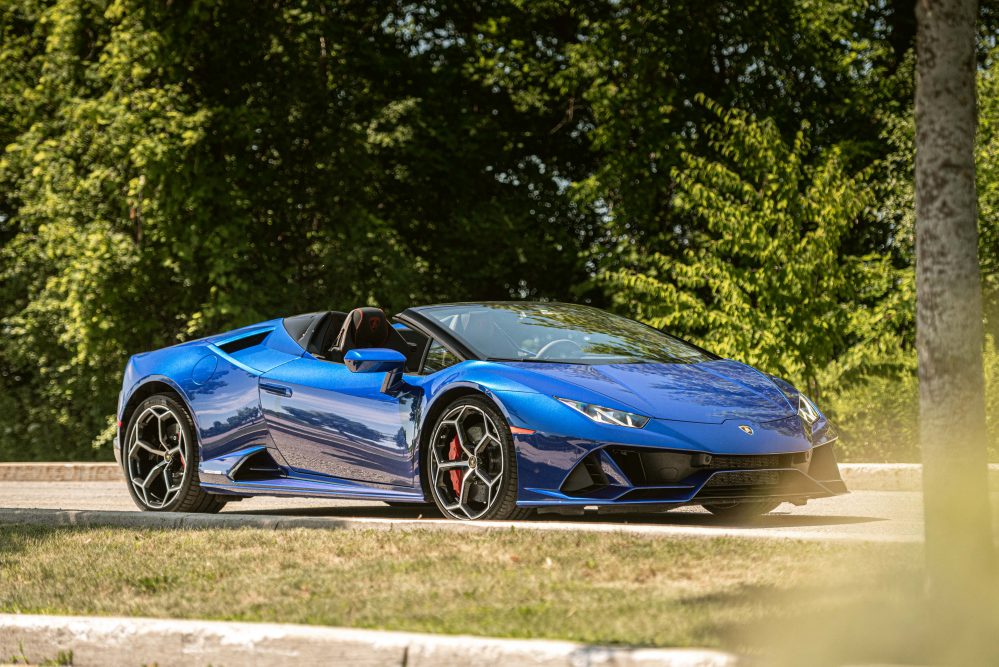 But what I find even more remarkable about Lamborghini’s latest baby supercar, is that it’s finally an athletic performance machine. In the past, Lamborghini was content of being a flashy boulevard queen, one that preferred attracting all the looks instead of actually outperforming the competition at the track. 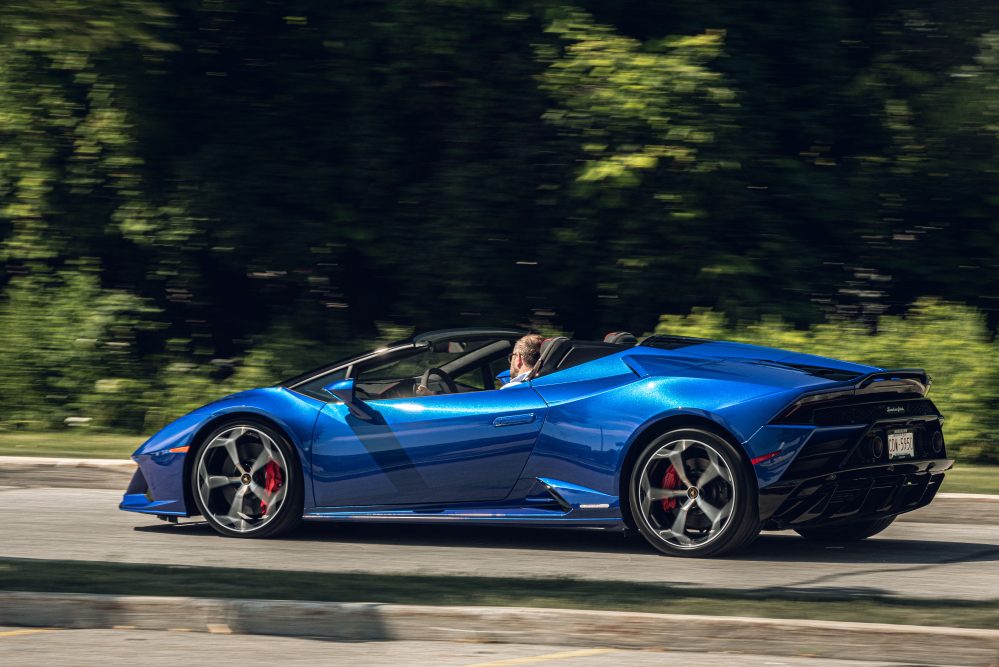 Now though, Lamborghini is finally a supercar brand that can back up its looks. If anything, it could be more effective at providing performance than the McLaren 600LT I drove last summer. But perhaps a Ferrari F8 Tributo is a more polished supercar, a machine I still haven’t sampled myself. At least, you can be sure the Evo is still a  proper Lamborghini; a car that masters the art of transforming you into a superstar the way no other carmaker can.