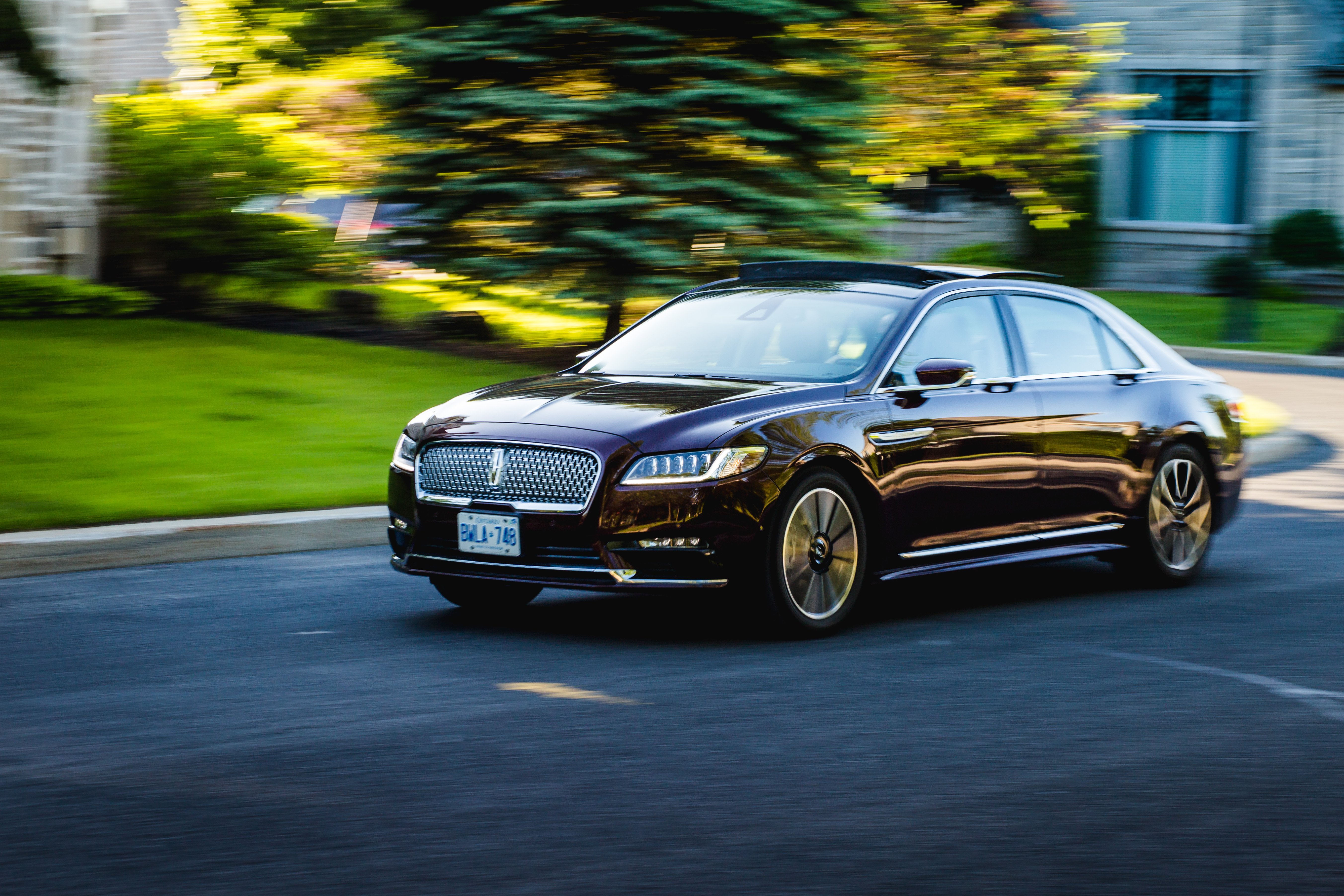 This car. The one right here. The Lincoln Continental. That’s right, a Lincoln. That’s the car I’ve been the most eager to review this year. An old friend, who has been actively following this blog since its inception, and loans me used cars for Jalopnik’s Not-New Review section, asked me about a month ago:

“What’s the next really awesome new car you’ll have for a review Will?”

“A Lincoln man” – I responded. “Really? Please tell me you’ll have the new Continental!?” – He asked in anticipation.

“Oh yes my friend. The one where Matthew McConaughey speaks to himself in those commercials. That one. That’s the one I’ll have” – I replied.

“Dude, please let me know when you’ll have it, I love that car!”

This, friends, the little conversation that just happened between two males in their early thirties, is precisely why Lincoln has struck a home-run with its latest midsize luxury sedan. The millennial generation absolutely adores it. 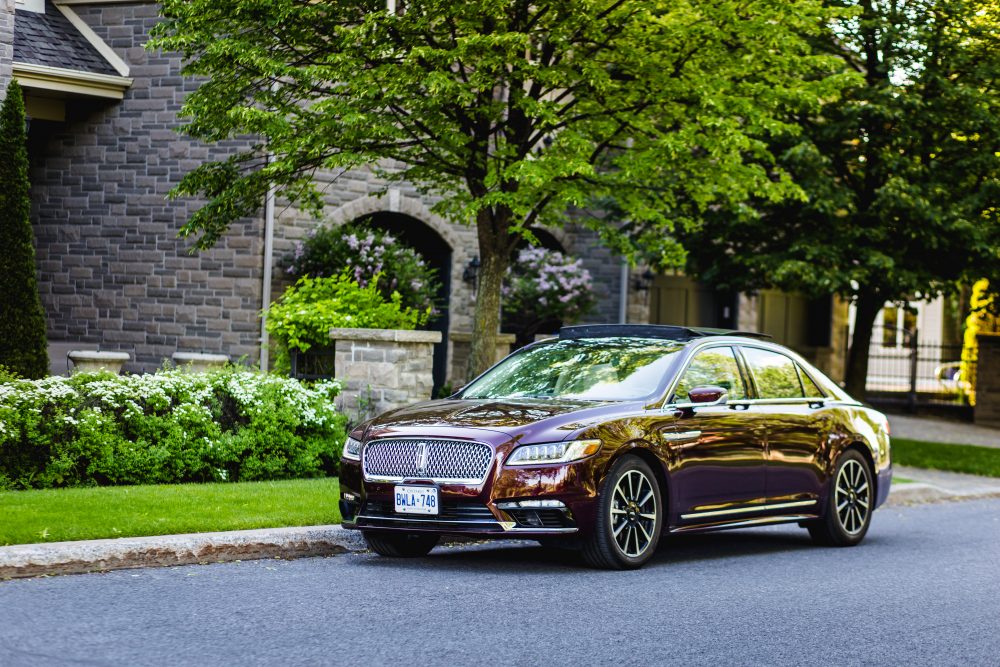 At the moment, a few carmakers are experiencing an identity crisis, a resurgence, if you will, of the core values that constitute their brand identity in an attempt to attract new blood into their showrooms. Lincoln, along with Volvo, Acura, and Buick, is one of those re-emerging brands. Every automotive journalist will tell you that the best cars have spawned from brands that were desperately hungry to remain alive. The Continental is such a car.

When I took the Lincoln MKC crossover for a ride earlier this year, I couldn’t deny its competence in the segment. It’s a good luxury crossover. But sadly, it failed at delivering the “why should I care?” factor that is quintessential in stealing the sale from the competition. That’s what Lincoln has been struggling at delivering for so long. For the longest time, its cars felt like posh versions of lukewarm Fords. 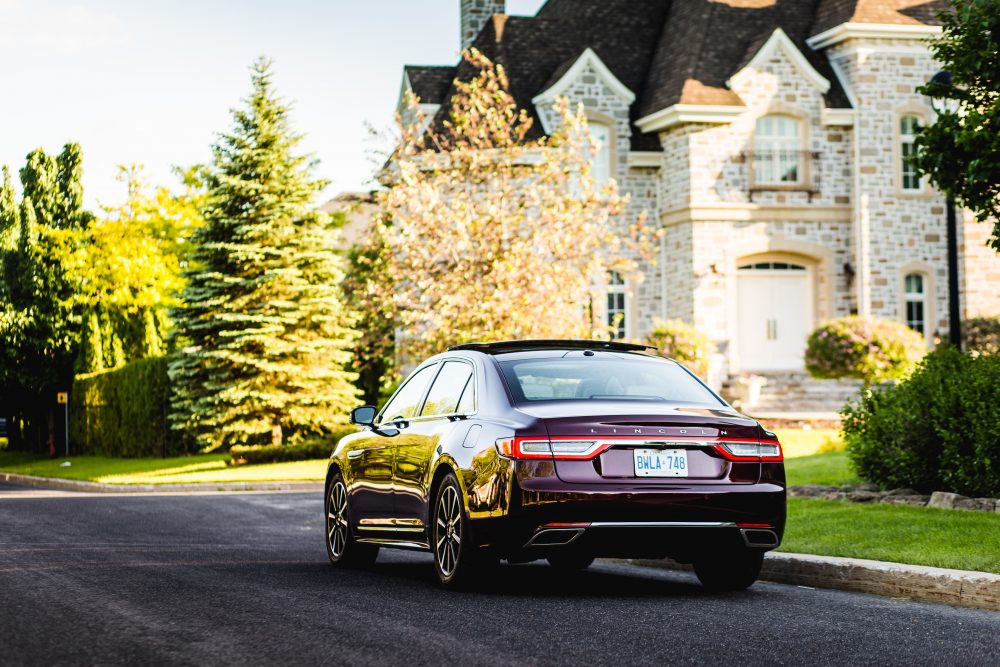 If Lincoln wants to distinguish itself from the pack, and most importantly: make the new millennial generation give a crap about its cars, the entire brand must come out bold, fresh, and cool, but still remain true to its Lincoln roots. For this clientele, trying too hard is never hip, but failure must be avoided like the plague. But the Continental gets it right. 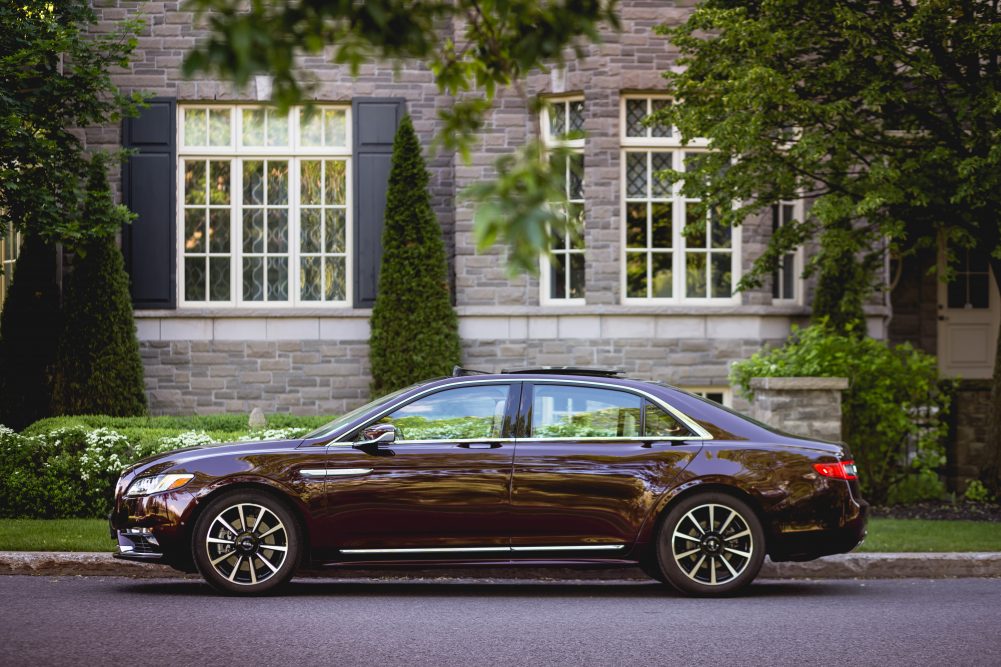 This is the car that’s in charge of propelling the new Lincoln brand into the future. And with the all-new, seriously bitchin’ Navigator SUV scheduled to arrive later this year, there’s never been so much excitement around an American luxury brand in years. I think we can all agree that the Continental is an absolutely gorgeous vehicle to behold, one whose prominent front grille evokes grace, confidence, and quality, and whose sloped roofline and elegantly squared off, tapered rear takes us back to a time when American cars were bold, brash and flamboyant not because they had to be, but because they chose to be.

Finally, an American premium car that doesn’t try to copy Europe to fulfill its luxury mission. 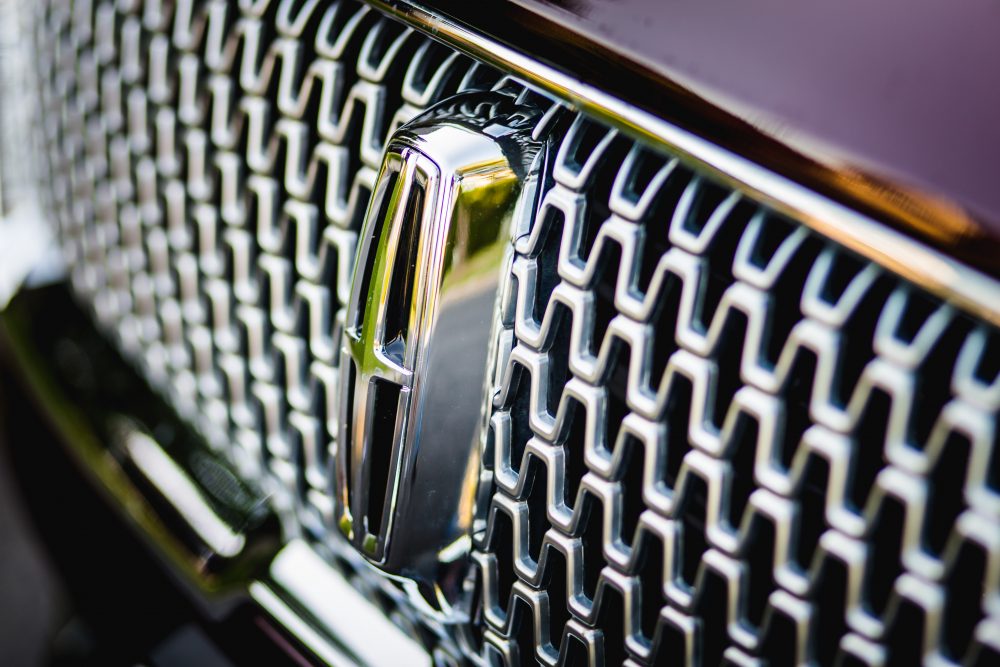 Everywhere I went with the Continental, I got positive comments from bystanders. During the Canadian Formula 1 Grand Prix weekend, on the famous Crescent party night, where supercars, high-end luxury vehicles, and beautiful people populate the streets of Montréal, the Continental didn’t do me shame. I had parked the car in front of a Porsche 911 GT3 RS and a Lamborghini Huracan. Meanwhile, four young, mid-twenties men, walked up to, not the supercars, but the Lincoln, and went totally berserk over the fact that finally, they could spot a real life version of the car. Their excitement was genuine, and their questions were honest. They wanted to feel all that was Continental.

When was the last time a Lincoln parked next to a Lamborghini created so much commotion from the younger generation? 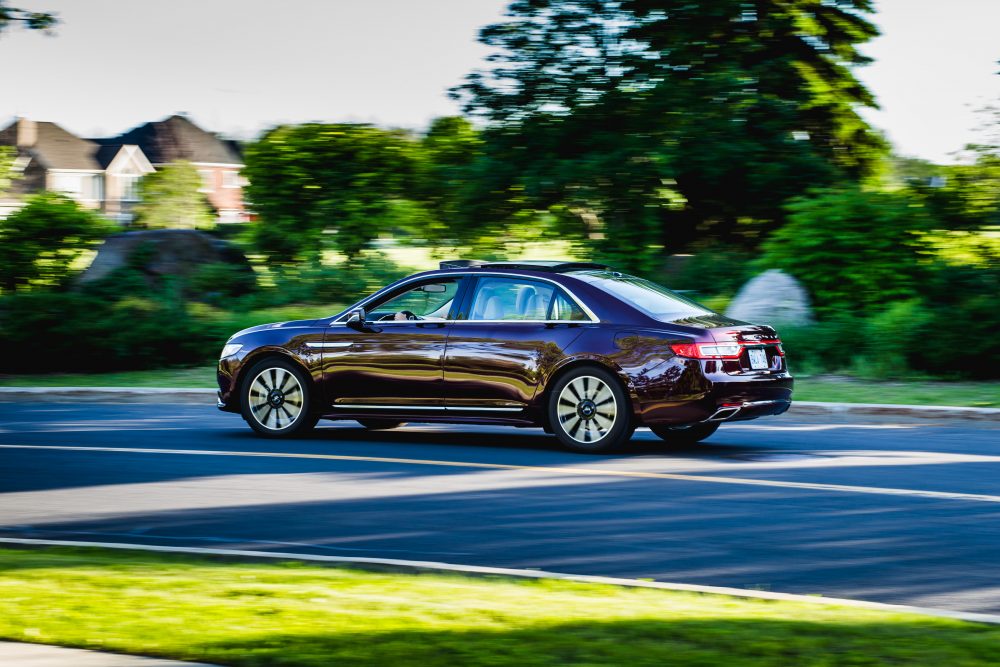 Of course, America has never had an issue with building attractive sedans. The issue with most Lincolns in the past was their tendency to share their driving characteristics with a yacht. And while I admit I was expecting improved refinement from this American sedan given that it rides on the same CD4 platform as the Ford Fusion and Edge, I was still expecting it to be somewhat soft. 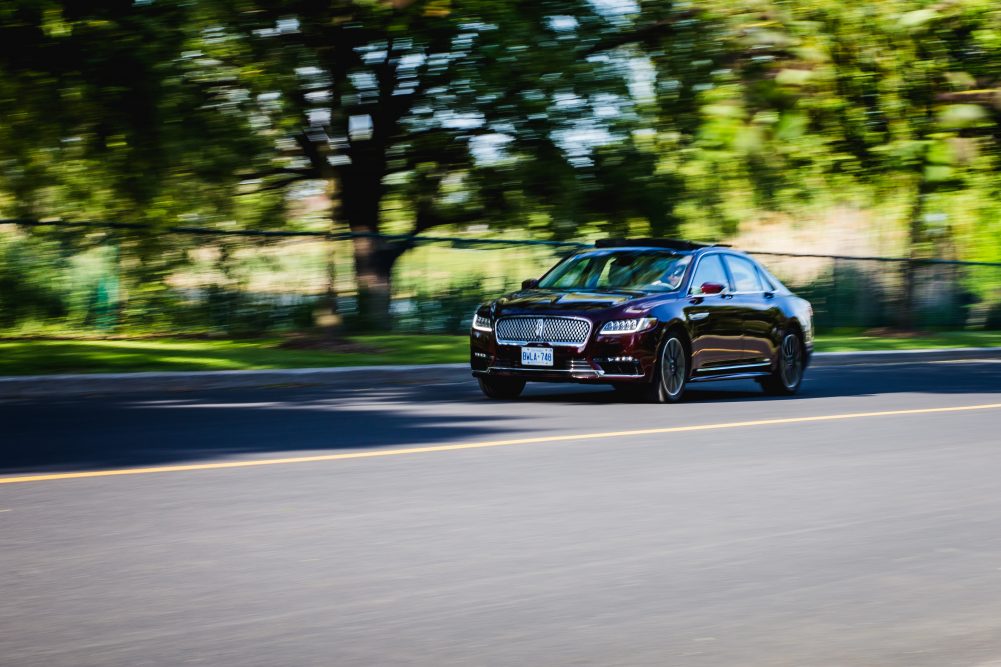 On the road, the Continental exhibits an athletic composure that feels similar to what you’ll find in the best European sports sedans out there. And that steering can be counted among the best I’ve sampled in the segment – it’s well weighted and supremely communicative. The Continental reacts quickly to the slightest steering inputs, feeling small and light, agile, balancing grace and performance with utmost efficiency as it carries speed effortlessly on its optional, and absolutely magnificent 19-inch aluminium wheels. 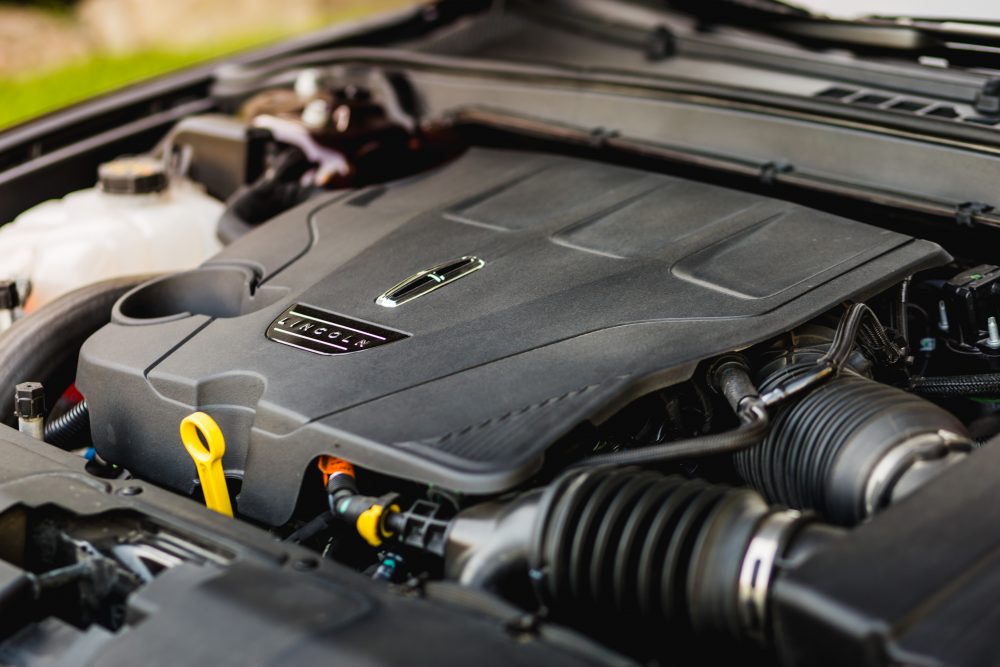 There are two powertrain packages to choose from. Base models come with a 2.7-liter, 305-horsepower V6, with power going to the front, or all four wheels.

I, on the other hand, had the top flight, Reserve model. Because of course I did. That one comes with a 400-horsepower, 3.0-liter, twin-turbo six. All-wheel-drive is standard with that engine, and a six-speed automatic does the shifting for you. That transmission is operated via buttons on the dashboard, which I absolutely cannot stand. I still don’t understand the automotive industry’s desire to reinvent objects that have always worked fine. What’s wrong with a gear lever? 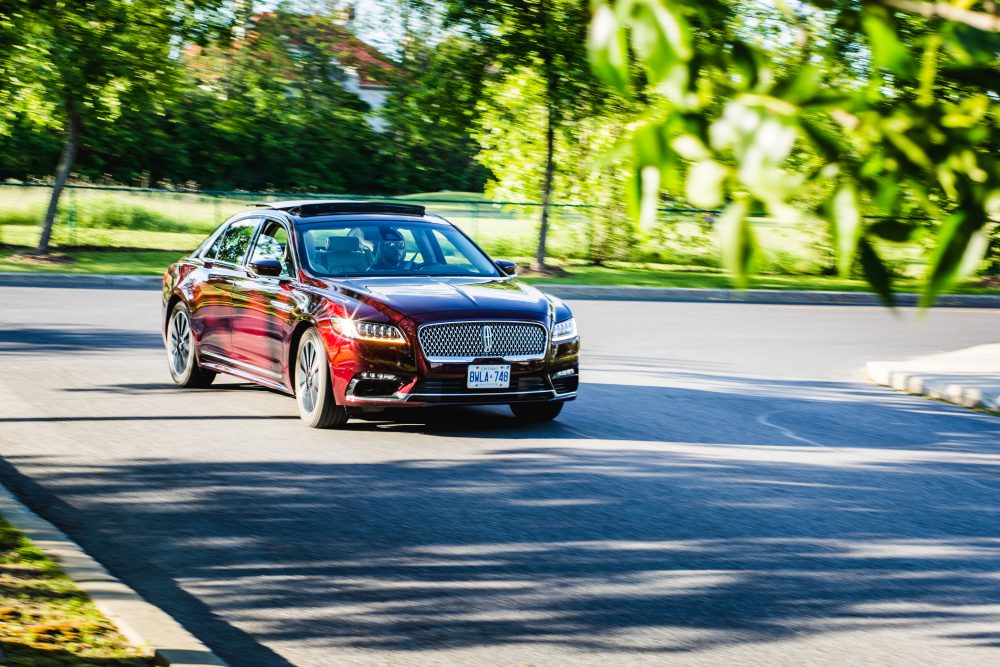 The V6 engine though. What a fluid, smooth and sophisticated delivery of power. Four cylinder turbo units may be the way to go into the future as far as efficiency goes, but nothing will replace the thunderous mechanical wail of a V6. The Continental sounds epic throughout its entire rev range, and never falls short of passing power. 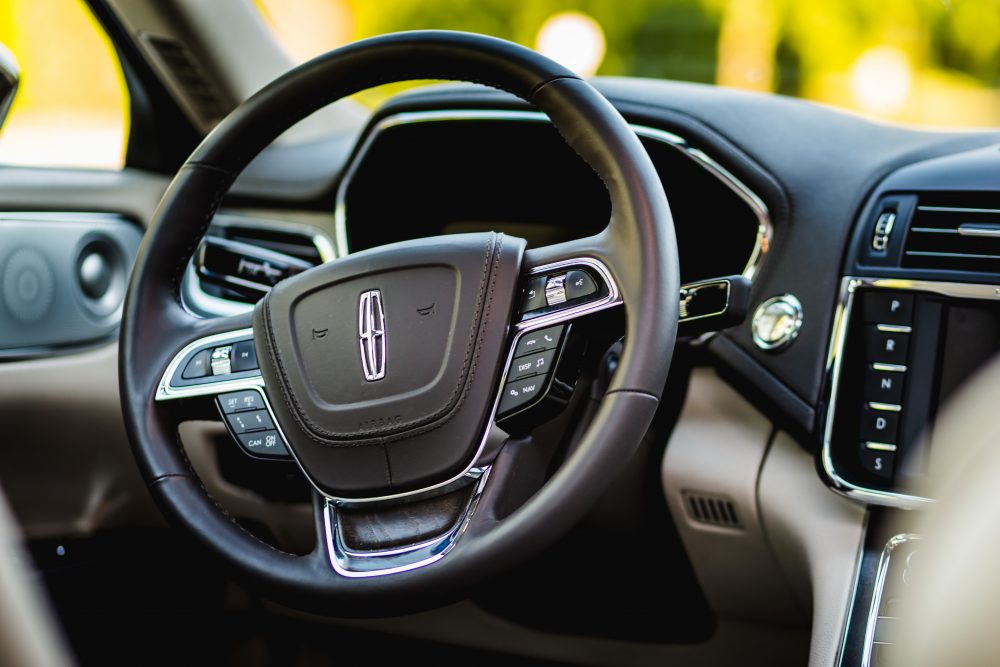 The car’s also respectfully quick. With a 0 to 100 km/h acceleration time of 5.0 seconds flat, you might end up drag racing a few Mustangs between stoplights just for kicks.

That being said, as much as I enjoyed the Continental’s stiff and responsive chassis, this luxury sedan rides a tad on the hard side. The dampers are too stiff, and the car’s composure over the hard stuff isn’t as plush as what you’ll get from a Buick for instance. But there’s a lot to like here. Let’s call it work in progress. 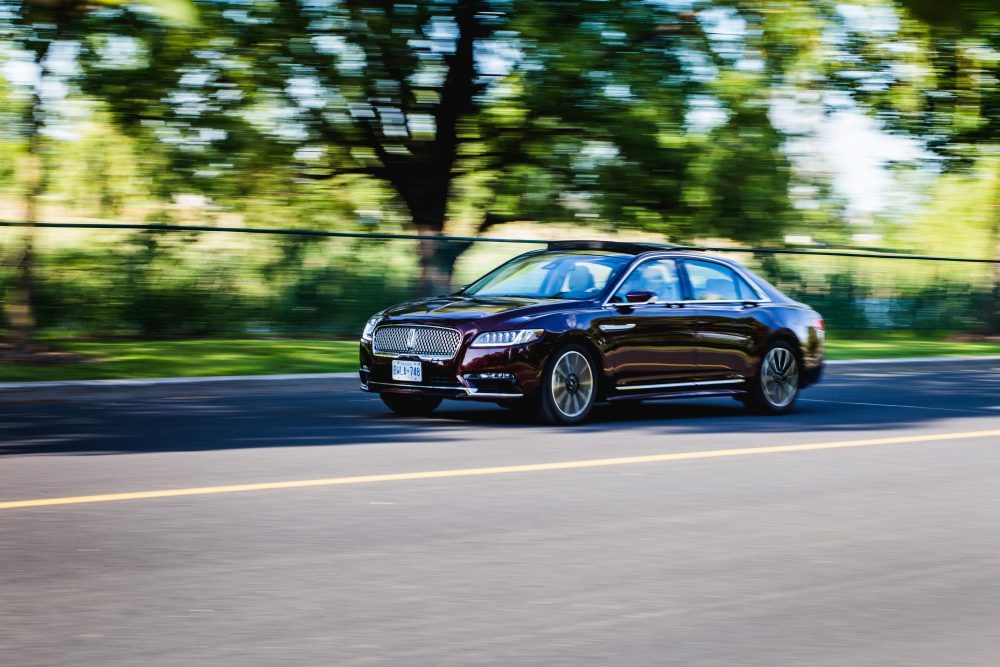 Getting inside a Continental is achieved by grabbing one of its elegantly styled chrome door handles located at the car’s beltline, where a micro switch located inside the handle senses the slightest touch, and unlatches the door electrically – click.

Through what appears like opening a well concealed vault, opening the door gives way to a wide orifice that greets you into a vast, beautifully lit and airy living room tapered in fresh cow hides and wooden surfaces. As far as interiors go, the Continental could easily replace your own house. 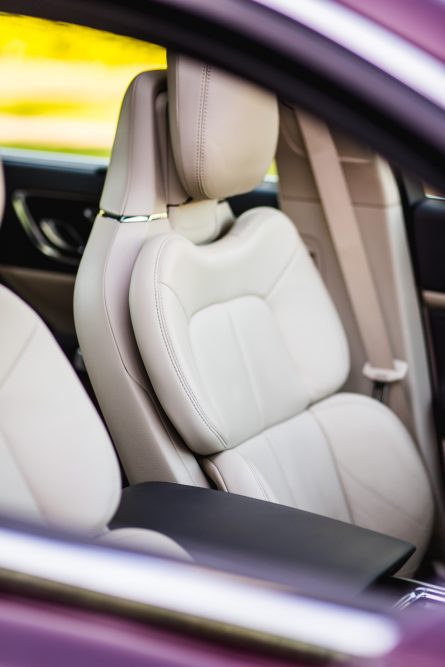 Four 30-way adjustable seats present themselves as coffee-colored, elegantly sculptured lazy-boys that resemble those in a Learjet. Everything can be tailored to your convenience on those seats, from lumbar support to vertical headrest adjustment. There’s even a two-way massaging feature, and not just for the driver’s seat, but at all fours.

This is one of the rare cars in which I enjoyed more sitting in the rear.

Ford’s corporate Sync 3 infotainment system proved to remain as hard to get your head around upon first contact as with other Ford/Lincoln products, but once the learning curve is passed, the system operates adequately. But there is some lag in the way the interface responds to your inputs, which can become irritating real quick. 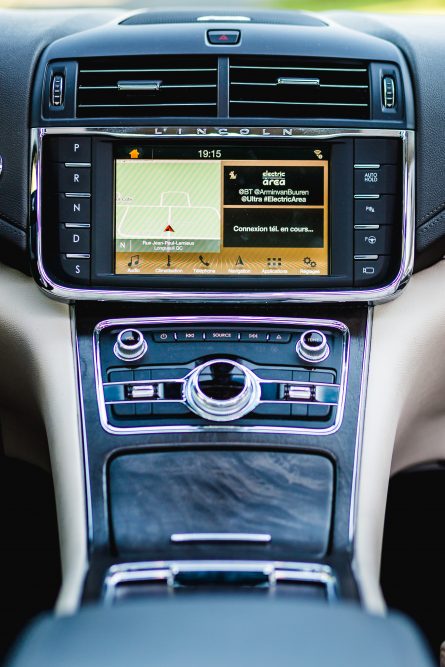 Visibility and interior room are ample, especially rear legroom which surpasses several cars of this segment. And occupants are treated to a full limousine treatment through elevated seating height, a center console that gives way to HVAC, audio and even sunroof controls, and a headliner that was contoured to accommodate the most vertically challenged human beings.

My only gripe with the car’s ergonomics was the rather skinny side-view mirrors which led to a somewhat claustrophobic experience, especially when attempting to park the car in clustered areas. And on the road, while the transmission proved to be smooth in operation at speed, there were some instances where it would emit a worrying clunk when downshifting as if it had just tripped and dropped a gear on the ground. 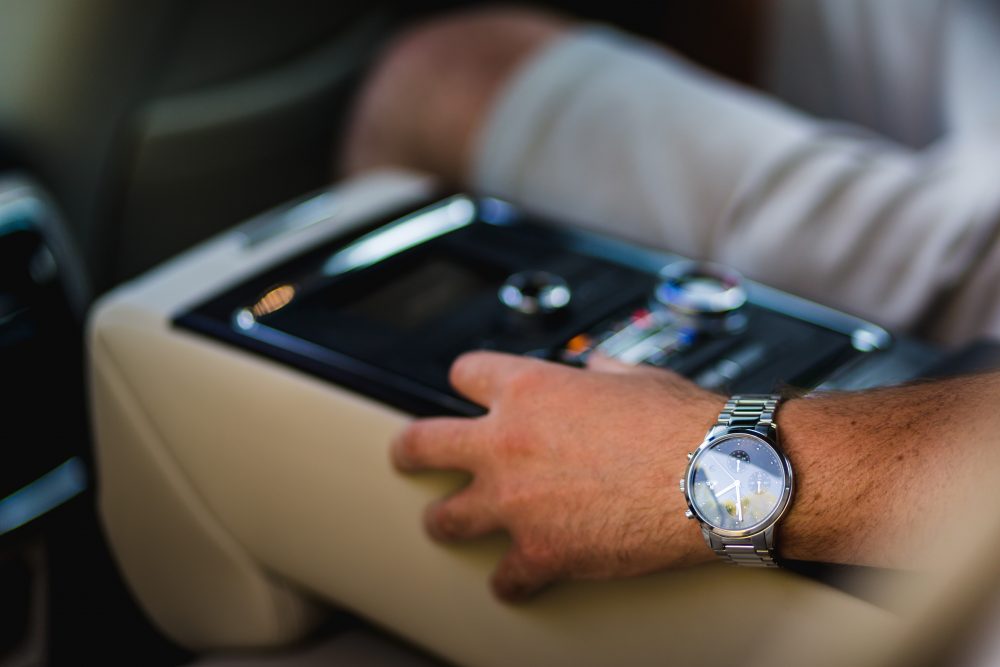 Finally, although I admire the Continental’s cabin for its supremely comfortable and relaxing experience, road and wind noise remain prominent at highway speeds. This isn’t the vault-like experience you’ll get from a Lexus.

Pricing for a 2017 Lincoln Continental is where things become truly appealing. The Select 200A entry level model kicks off at $58,000. My tester, the Reserve 300A, which tops the range with all possible semi-autonomous technology, active park assist, cappuccino luxury leather, a gigantic panoramic sunroof and those 30-way adjustable seats, which you absolutely need in your Lincoln, stickers for $77,650.

And to be fair, the Continental feels much more expensive than its price tag suggests. I’ve sat in the back of a $100,000 Mercedes-Benz that didn’t nearly feel this exquisite. 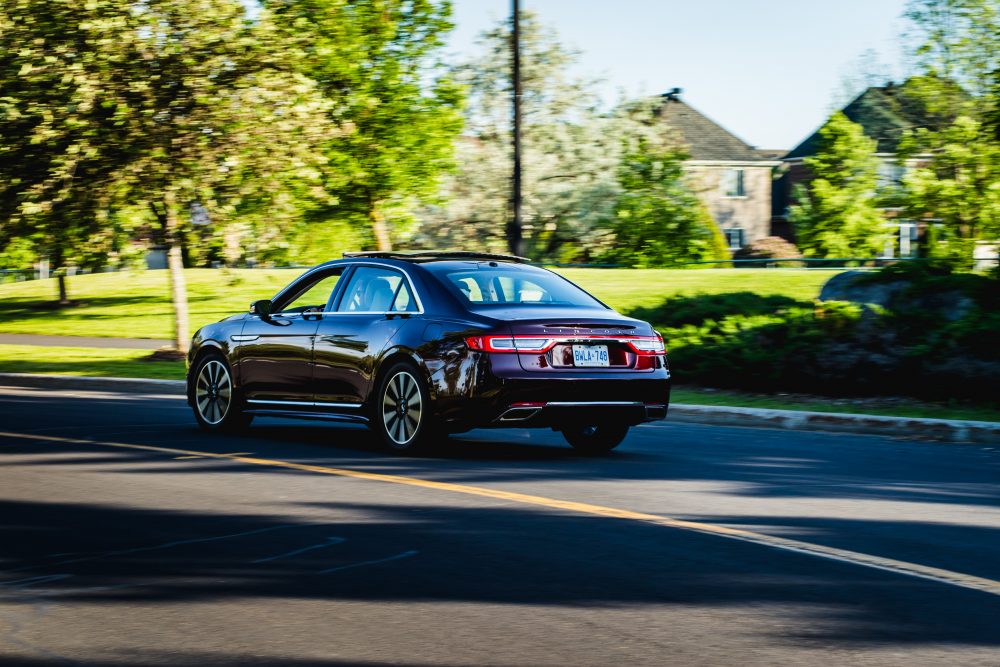 To wrap it all up, the 2017 Lincoln Continental is a beautiful luxury sedan and a fresh offering in an increasingly competitive segment. It manages to solidify the Lincoln brand’s identity, while keeping one foot solidly planted in the past. And it’s an impeccable value.

Now, if only Lincoln could dig a little deeper into this car’s chassis, tweak the platform, readjust the suspension, and solidify the package, it could very well be selling the best luxury sedan bargain on the market today.