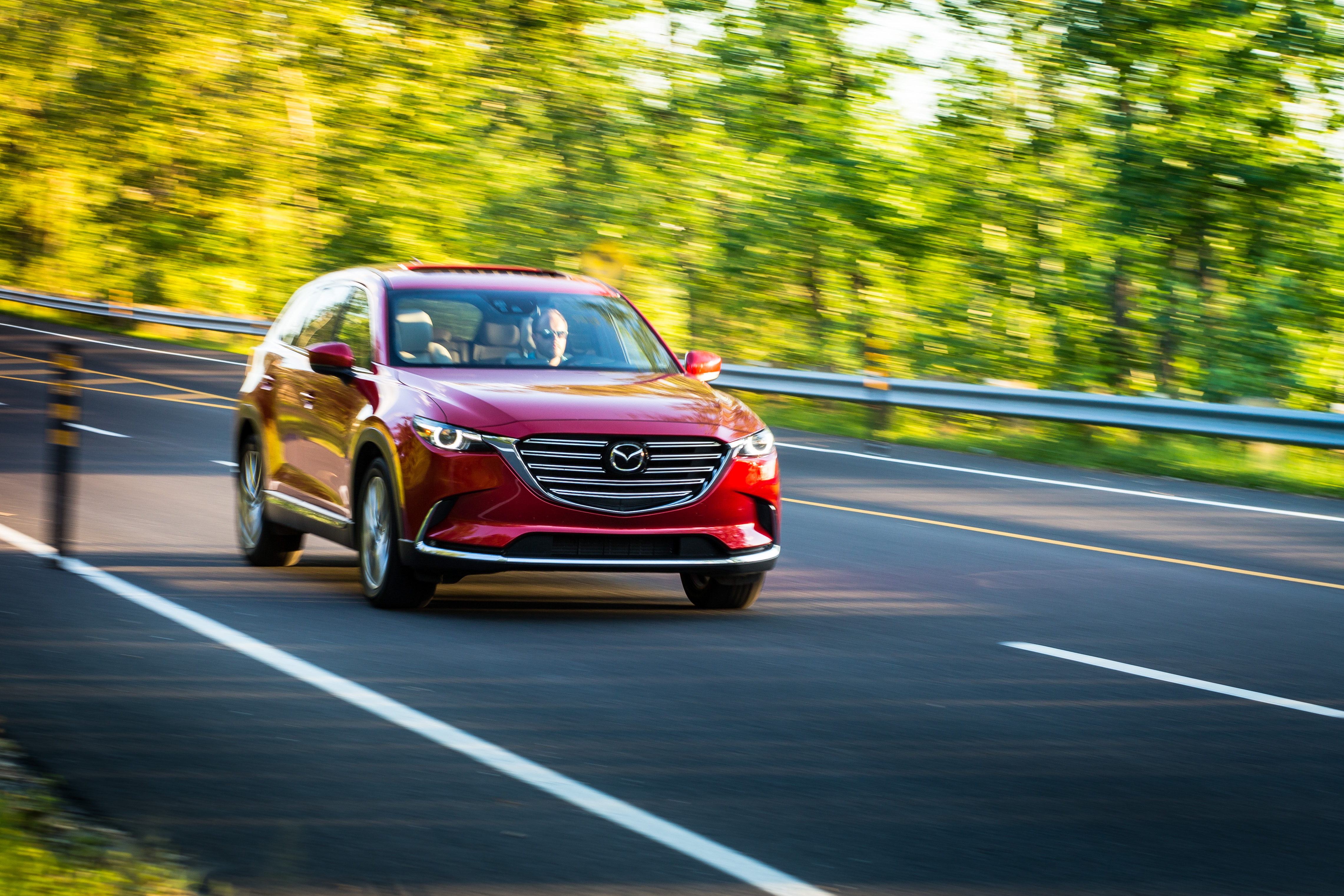 The seven passenger crossover segment is now kind of a necessity for carmakers. When young families walk into a showroom now, they’re not looking for a minivan anymore, they’re seeking the bloated “rugged” all-wheel-drive contraption that’s now dominating the automotive landscape. There’s no getting around it, the crossover has taken over.

The problem with this segment is that as you go from one offering to the next, from a Honda Pilot, to a Nissan Pathfinder, they tend to often feel like carbon copies of one another. The basic formula is usually the same: there’s some sort of car-derived platform underneath, a lot of available cargo space, an exterior design that’s not particularly exciting, and the whole thing is built using a mashup of shared corporate parts. Boring is also the main theme here.

But for a brand like Mazda, who uses the not-so-boring lightweight and fun-to-drive MX-5 as a rolling beacon for the entire company’s “driving matters” ethos, building this type of vehicle is particularly more challenging. How do you market an oversized mom-jeans mobile that’s engaging to drive? 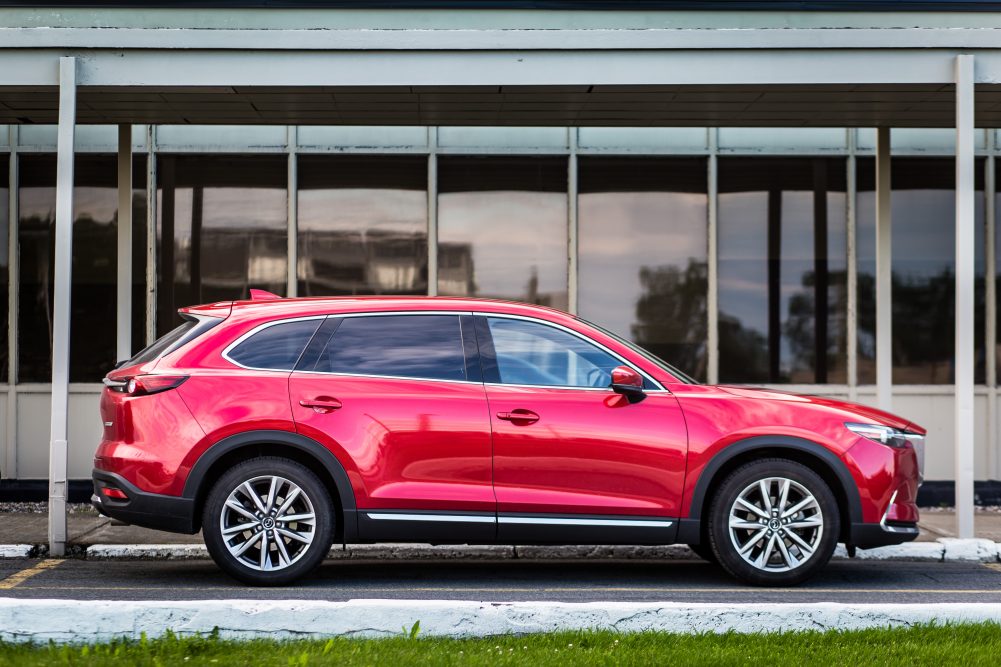 Mazda is a carmaker that has quickly stood back up on its feet after parting ways with its giant American partner Ford. Maintaining a close relationship with Dearborn for so long lead to old habits that were hard to break. Such habits came in the form of US-based assembly plants and a large parts bin to pick from.

But when the Japanese carmaker had to relocate its operations back home and refocus its core vehicles, Mazda’s product planners, designers and engineers had to work overtime at keeping the company’s head above water. These efforts paid off in the form of consecutive vehicular homeruns with the Mazda 3 and CX-5 being at the center of it all. With this new CX-9, Mazda aims at pursuing this momentum, and it’s definitely off to a good start. 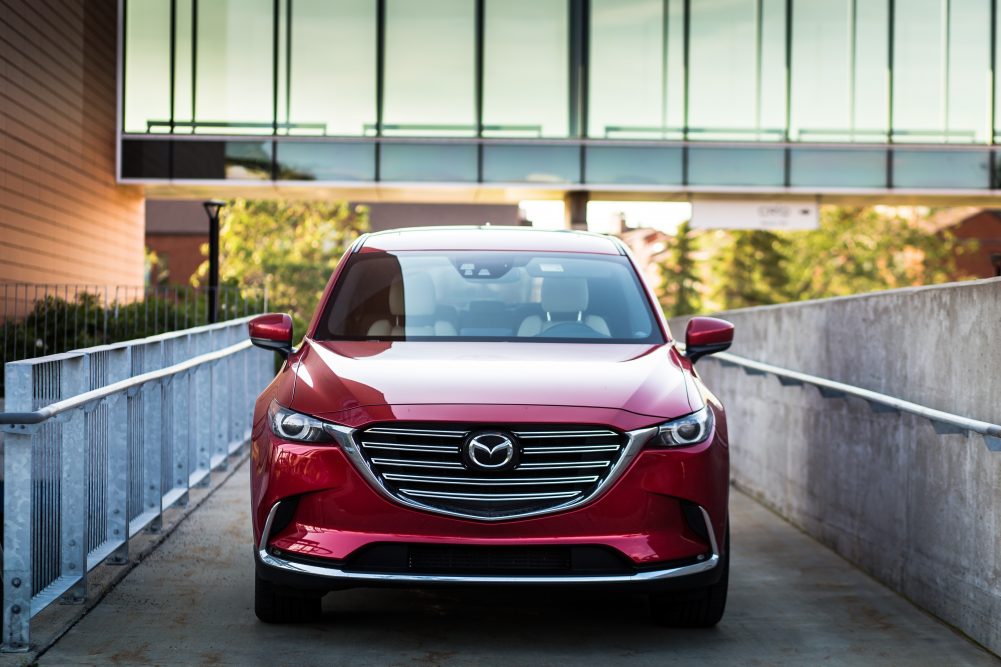 When Mazda says the CX-9 is entirely new from the ground up, it’s because it is truly, entirely new. The last generation CX-9, although a competent and spirited crossover, had more in common with a Ford Edge, both in platform and engine. This one doesn’t. This is Mazda’s all new scalable platform built in-house, which also underpins pretty much everything in its current lineup, except the CX-3 and MX-5. 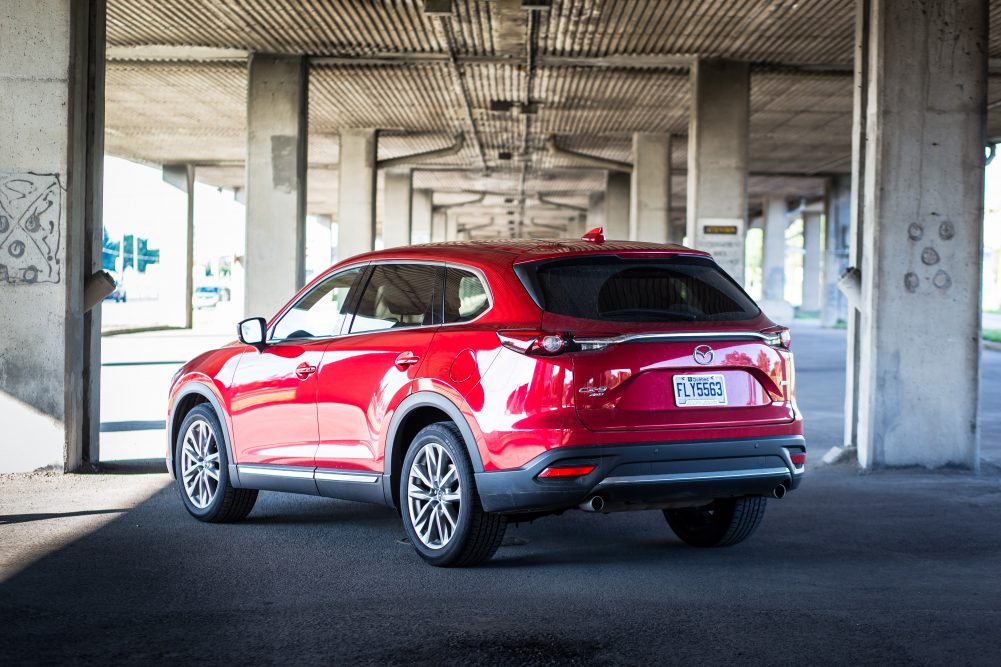 As is usual with recent Mazda vehicles, the CX-9 is nothing short of a spectacular design. While most seven-passenger crossovers are in fact lifted all-wheel-drive hatchbacks rather than actual trucks, Mazda designers have humbly embraced this reality by giving their mallfinder the same swooping lines, long hood, prominent grille, sloping roof and stubby rear end as the Mazda 3 hatchback. There’s also a premium feel to the way the CX-9 looks overall, with modern styling cues integrated into its head and taillights, placing it in a similar resemblance field as luxury crossovers like the Acura MDX or Infiniti QX60. 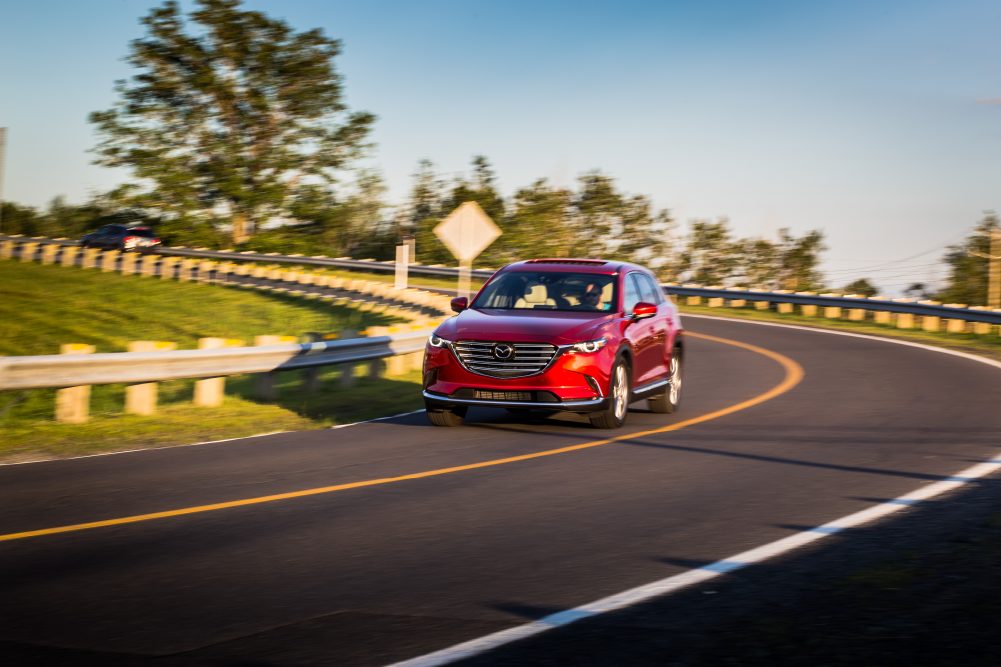 Another entirely new feature about the 2017 CX-9 is its fresh out of the oven turbocharged, 2.5-liter Skyactiv four cylinder. It’s essentially the same one found under the hood of the Mazda 6, but with added turbo boost. This is Mazda’s first take at forced induction since it’s no longer affiliated with Ford. 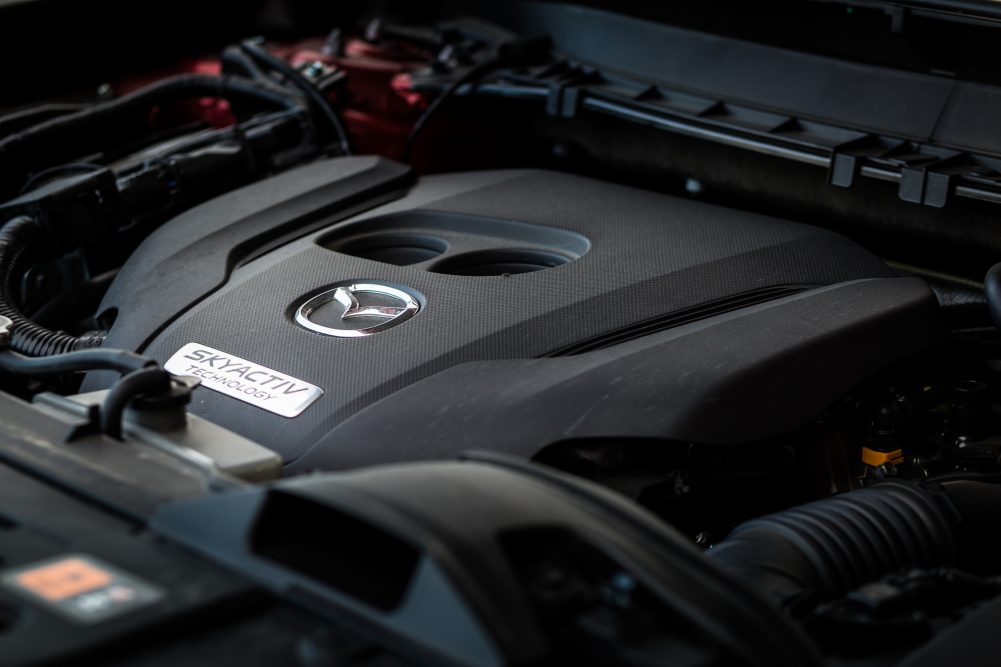 Power in the CX-9 is rated at 250 horsepower and 310 lb-ft of torque. All that go-juice can either be sent to the front, or all four wheels through a six-speed automatic gearbox.  To answer your question, yes, that fancy turbo engine does require premium fuel to move around, but don’t worry, it will run on regular pump gas as well. But it’ll drop down to 227 horsepower if you do.

Behind the wheel, the CX-9 lacks the linear power deliver and high revs of its V6 competitors and does feel somewhat slow during hard launches. That’s the inevitable downside of two fewer cylinders. Forced induction or not, this remains a four cylinder that’s hauling around a lot of weight. 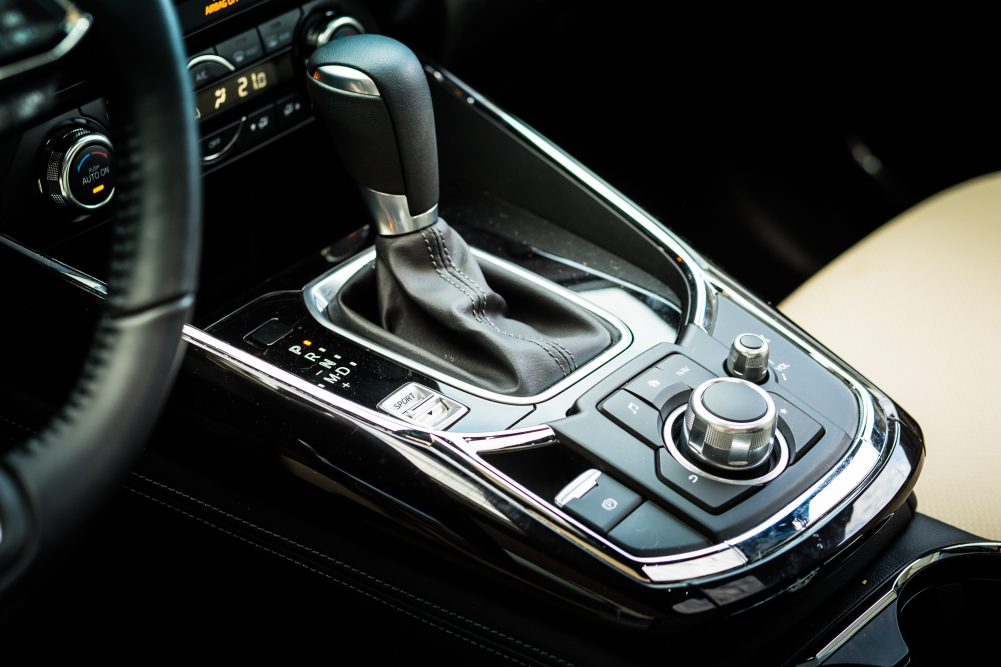 Luckily though, no turbo lag is felt, that’s partly thanks to Mazda’s Dynamic Pressure Turbo system, which, like the variable-geometry turbo you get in a Porsche 911, constrains exhaust flow at low rpm to accelerate gases, thus helping spool up the turbo in a more linear fashion. See it as placing your thumb over the end of a hose. 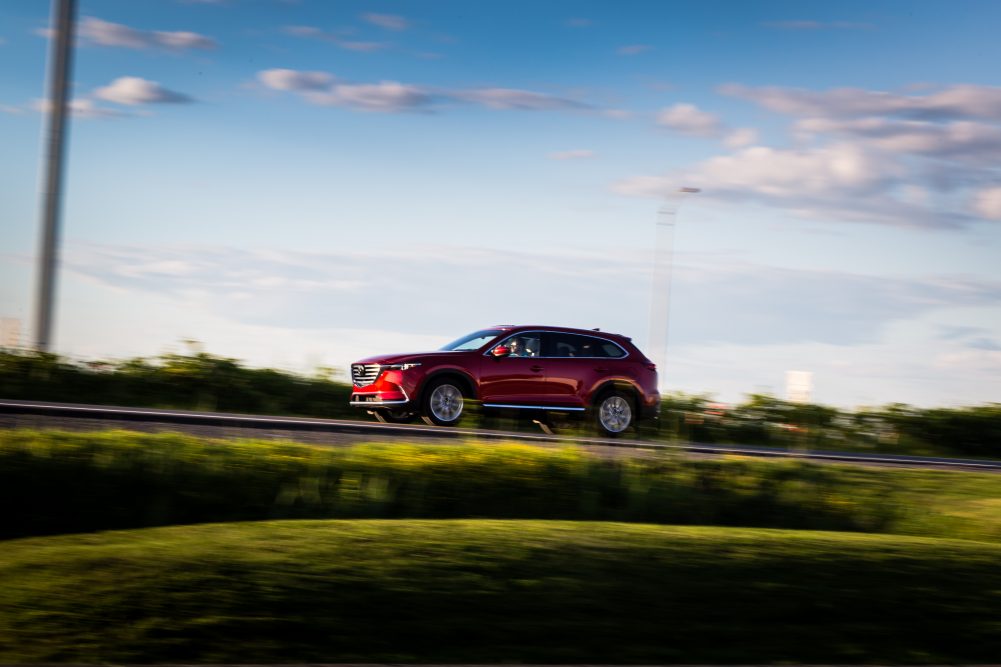 Mazda engineers have also programmed the torque curve to maximize low end twist as of 2,000 rpm, which happens no matter which fuel grade you choose. This abundance of torque off the line does give the CX-9 an ability to squirt effortlessly through traffic or take part in the occasional “we’ll be late for hockey practice” overtakes. Sadly though, all this illusion of vigor fades out quickly as the revs climb past 4,500 rpm, running out puff, sounding harsh, and kind of feeling like a diesel engine. 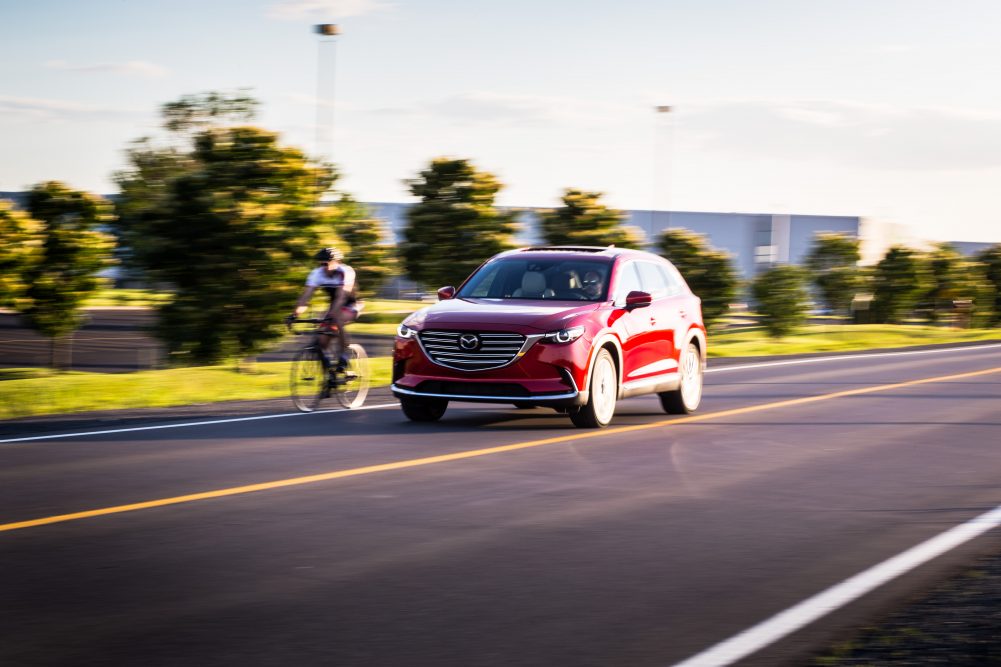 It doesn’t sound as mechanical and melodious as the naturally aspirated, rev happy engines found in the Honda Pilot or GMC Acadia, which don’t require – ahem – premium fuel to achieve their claimed power figures. But the Mazda’s fuel economy is a tad better than both the Honda Pilot and Toyota Highlander, I managed to hang around the high nines during the time I had it. 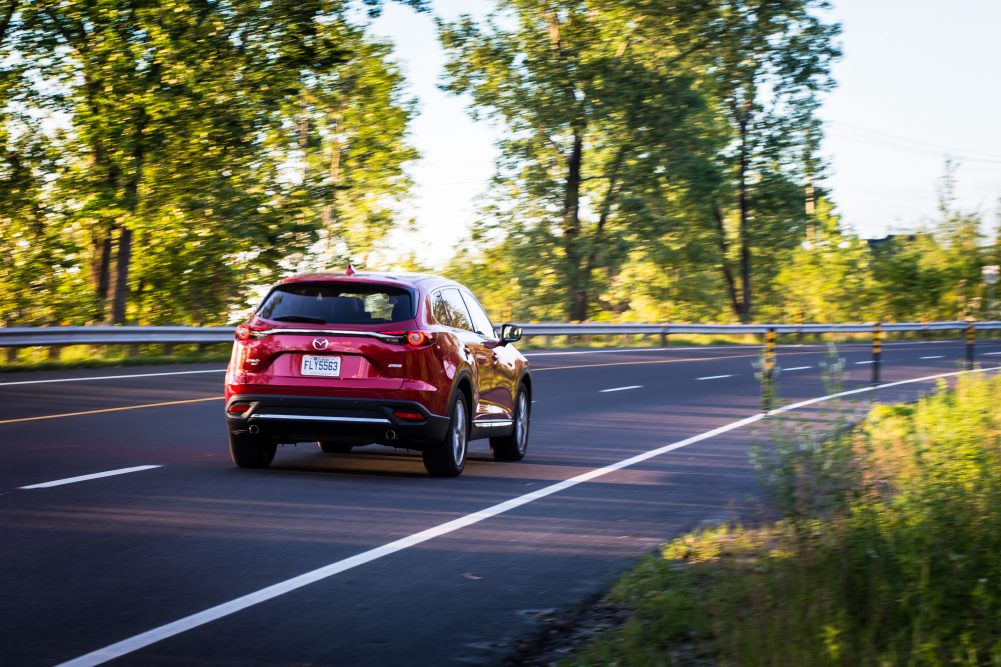 What this CX-9 lacks in mojo, it makes up for in spirited handling and a buttersmooth ride. Mazda’s been doing a fantastic job at calibrating its electrically controlled power steering system for its other cars, and the tradition continues in the CX-9 with precise and quick turn in, a firm chassis, a compliant ride and a well damped suspension. 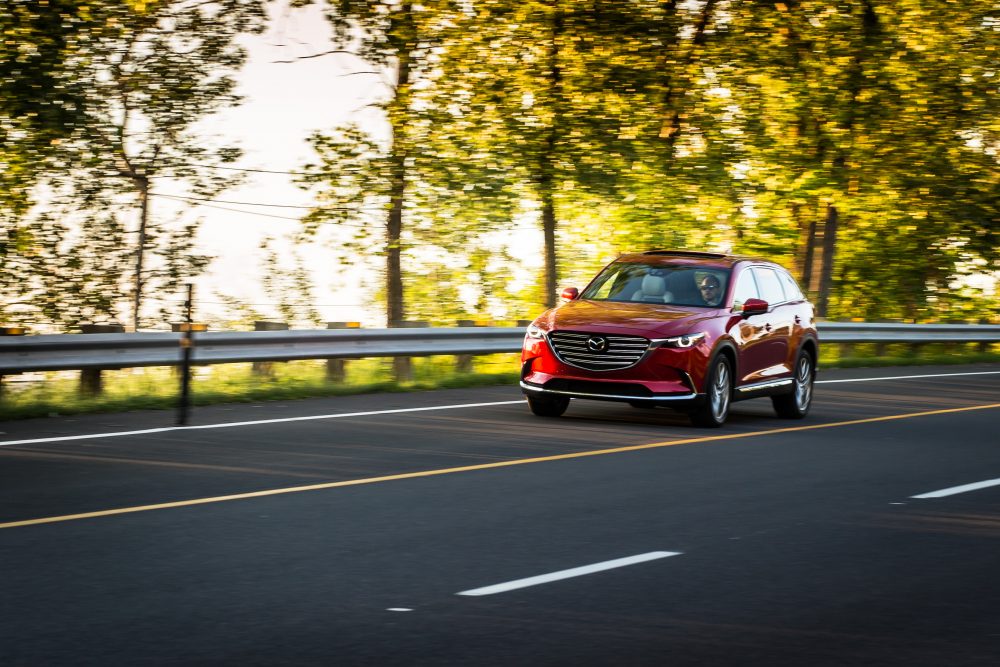 The word to remember here is smoothness. The CX-9 carries speed effortlessly, soaking up bumps as if its control arms were made out of rubber. The automatic transmission casually grabs the next gear in a stress-free fashion, and the entire acoustic experience feels like sitting in a library thanks to improved sound insulation. 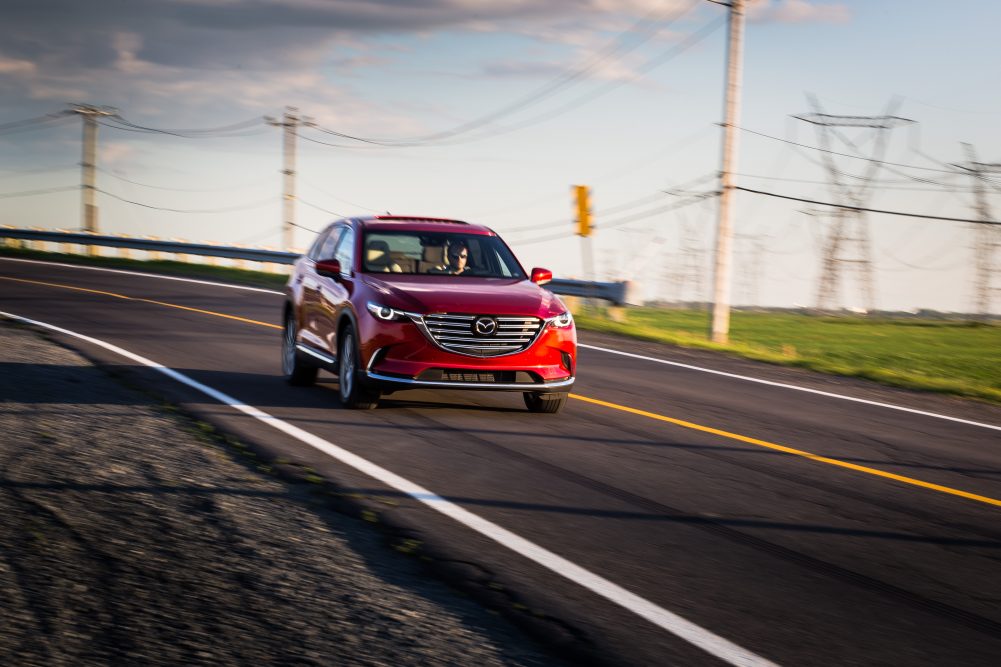 Like its exterior, the CX-9’s cabin is equally well appointed. My tester had the elegant two-tone interior with beige leather upholstery. High quality materials, impeccable fit and finish and a clean, cockpit-like modern dashboard theme dominates the cabin. I kid you not, this is one of the most shockingly attractive interiors I’ve sat in this side of a Lexus. 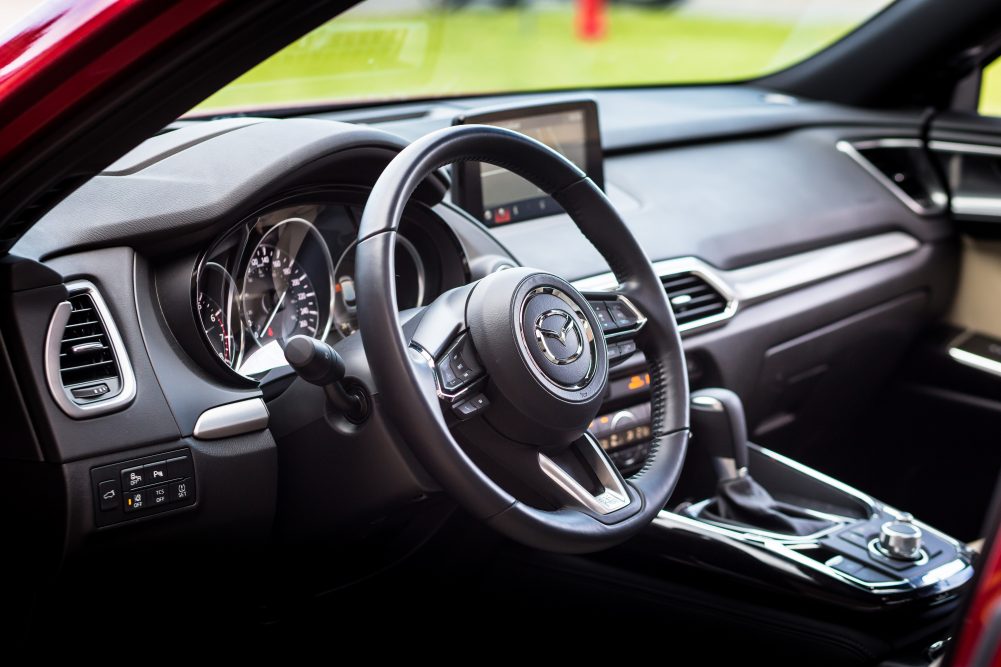 Fancy materials aside, the CX-9 has one Achilles heel versus its direct competitors: cabin space. At 71 cu-ft of total cargo capacity with all seats folded down, the CX-9 is on the small side of the seven-passenger bandwagon. That third row seat is fine once you’re in there, but I’d recommend leaving them to the kids, because ingress and egress is tight compared to the Pilot. And that seat can only be operated manually, whereas the competition now offers electric assistance. 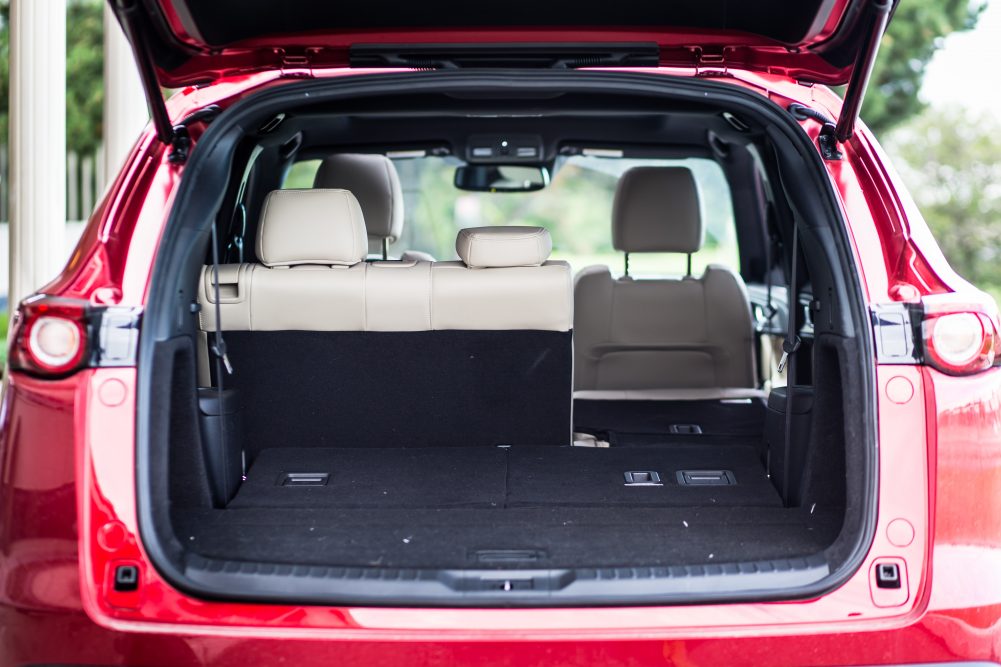 Pricing for a 2017 Mazda CX-9 is on par with its more established competitors. There are four trim levels to choose from. Base, front-wheel-drive GS models kick off at $37,610 and come standard with cozy convenient features such as heated seats and a wide angle rearview camera. My tester was the GT, which sits just under the top of the line Signature model. It comes with leather seats, 20-inch wheels, and a premium Bose sound system, just to name a few. That one goes for $47,510. 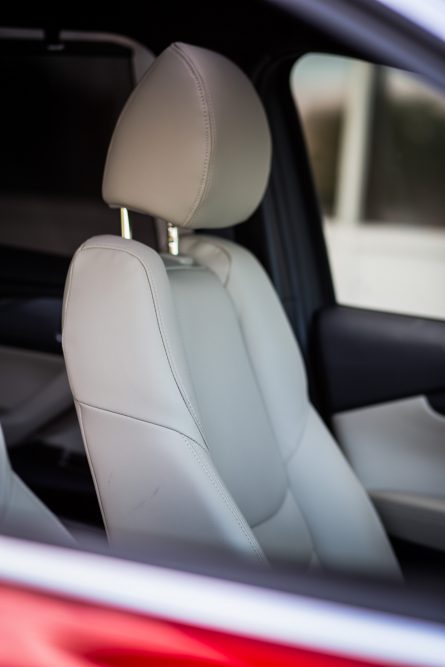 Mazda doesn’t have a luxury division like Toyota, Honda, and Nissan, so it uses the Signature CX-9 trim level to step up the luxury theme with the addition of Nappa leather surfaces and rosewood trimmed center console and door inserts. 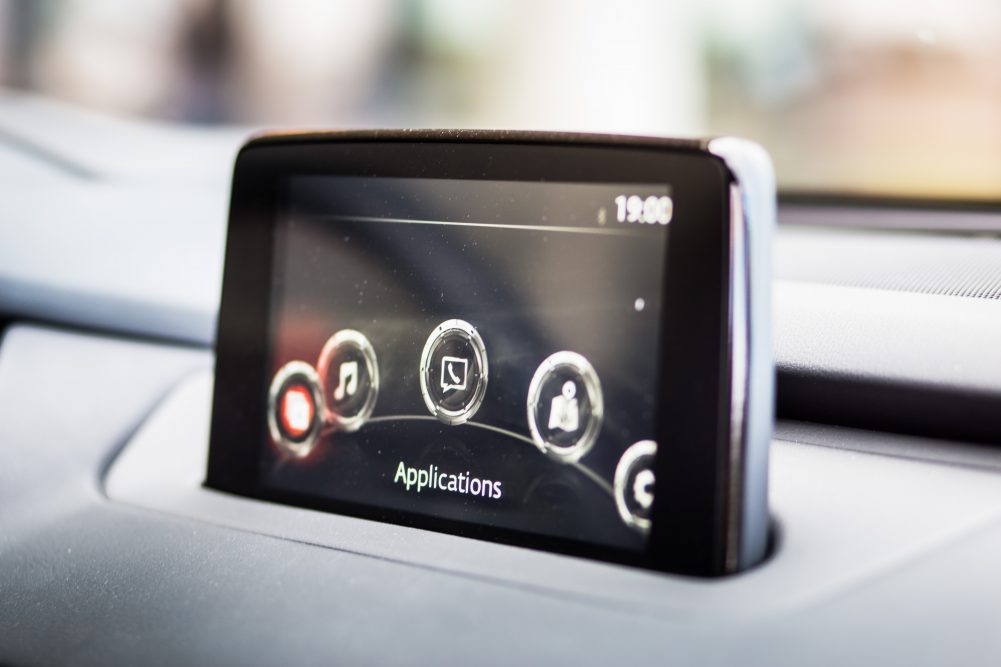 So let’s wrap this up: if you’re willing to sacrifice a bit of cargo space for a stunning exterior design, a quiet, well put together interior and driving dynamics that have more in common with a large hatchback than an SUV, then you should do well with the 2017 Mazda CX-9. This may seem like an obligatory move for Mazda, but in all fairness, the CX-9 isn’t boring to look at nor a penalty box to drive.

As for me, I’m curious to see which vehicle Mazda will drop this turbocharged engine in next.