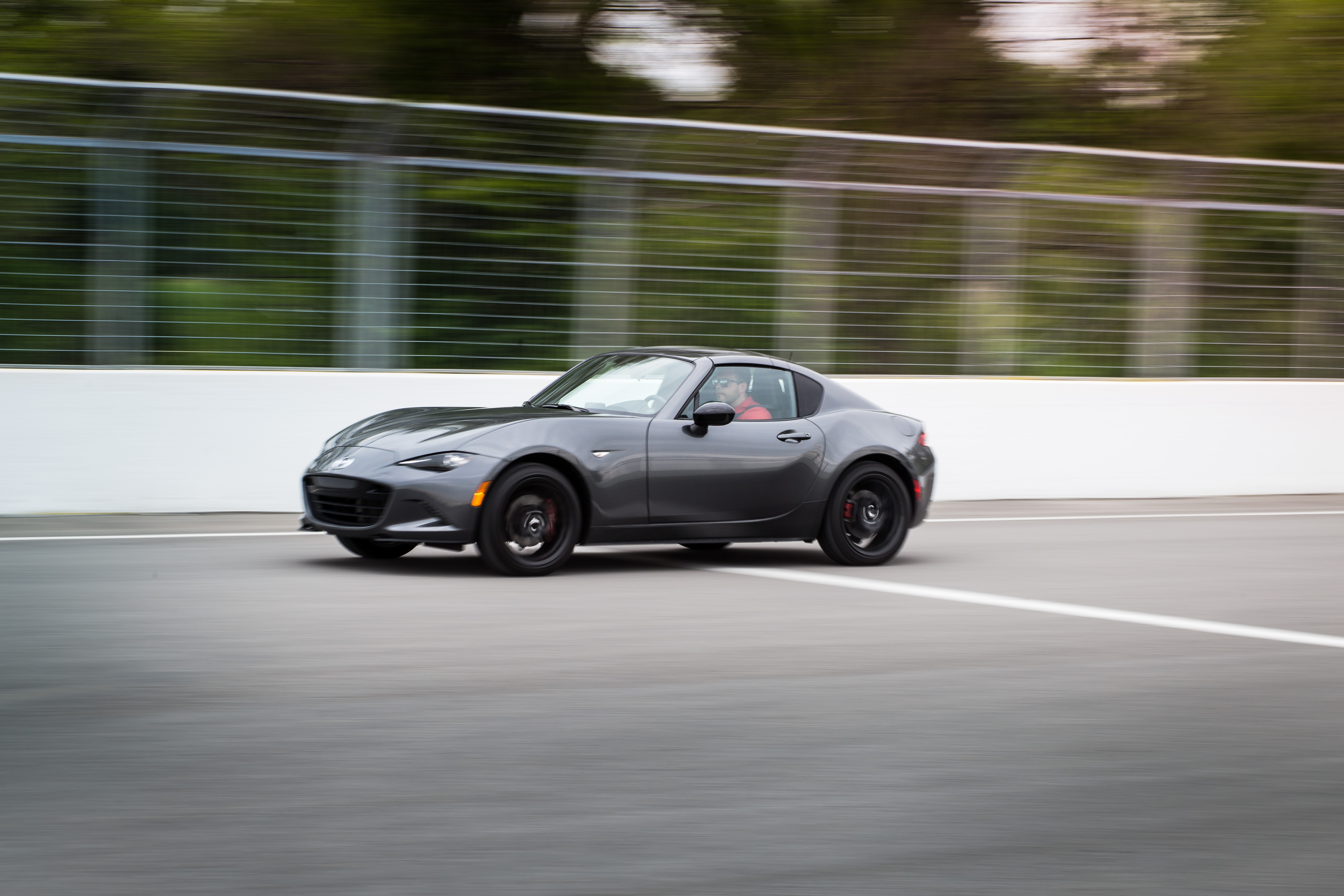 For those who also follow my work on Jalopnik, you’re all aware that I recently road-tripped across Québec to find the best poutine in a $300,000 Aston Martin DB11. While that may have seemed like a dream come true for a lot of car people, I have to confess: the entire time I was in the Aston Martin, I couldn’t wait to get back in the little MX-5. As much as I loved the brashness, power and exclusivity that came with that expensive British sports car, at the end of the day, I was exhausted, stressed out, and what I really wanted was a sports car that wasn’t always trying to kill me; a vehicle I could safely hoon around, wind in my hair, without fear of crashing or getting into too much trouble with the police.

Welcome everyone, to the 2017 Mazda MX-5 RF: the only sports car you will ever need in your life. 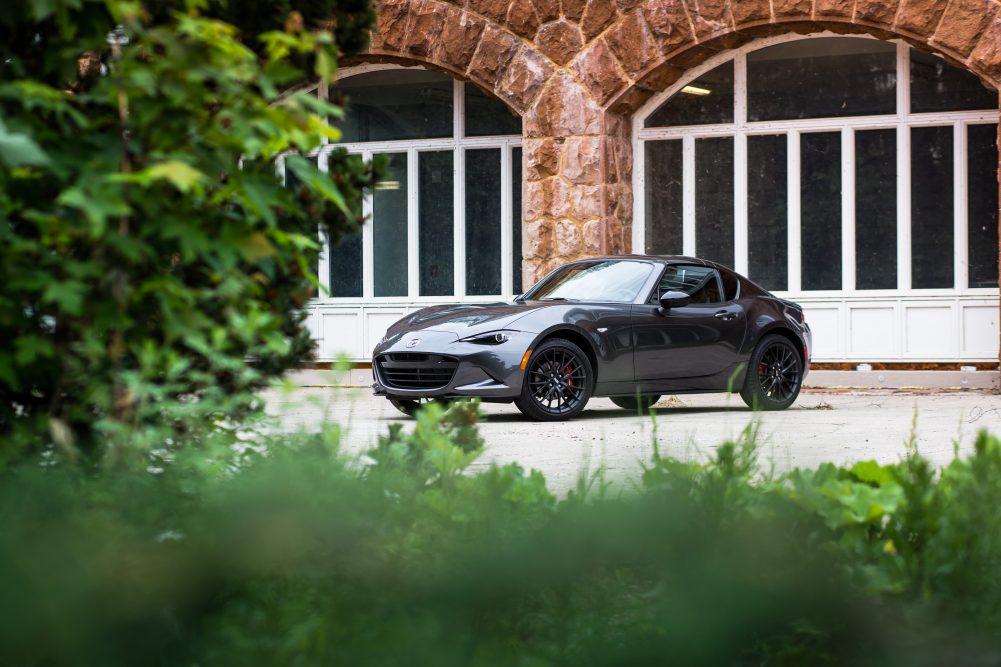 If you’re reading this and thinking the Mazda MX-5 (formerly called Miata) is a sissy car, and not a real sports machine, you have obviously never driven one. I invite you to read my original review of the car I did two years ago to find out more, where I, like many before me, finally understood what the hype was all about the moment I squeezed my gigantic frame behind its Lilliputian steering wheel. It’s an absolute thrill to drive.

The car you see here is the MX-5 RF. It’s all new, and also kind of a dream come true for a lot of Miata fans. Mazda has never built a hardtop version of the car in the 25 years it’s been on this planet. The reason was that a solid roof would intrude with the car’s Jinba-Ittai ethos, a Japanese slogan that translates into “horse and rider as one”. Remember, the Mazda MX-5 has always been first and foremost about being as lightweight as possible, with its performance manifested from the pleasures of the experience behind the wheel, not how fast it gets off the line. 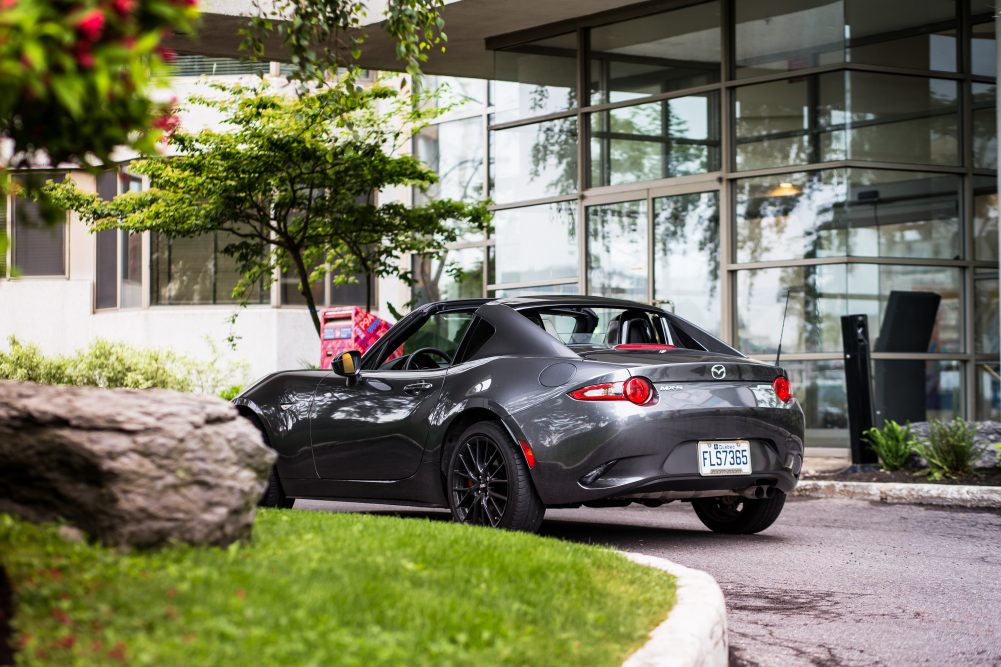 Sure, a fixed roof looks cool, but here’s the thing: it adds weight to the car. It also removes the open air, free-as-a-bird driving experience that has made this car so popular for over two decades. So how do you please everyone? By building a coupe that remains a convertible, hence the RF.

Mind you, this is kind of a continuation to the Power Retractable Hardtop model from the last generation MX-5, which not only proved to be a successful business case for Mazda, but never blemished the MX-5’s original promise. 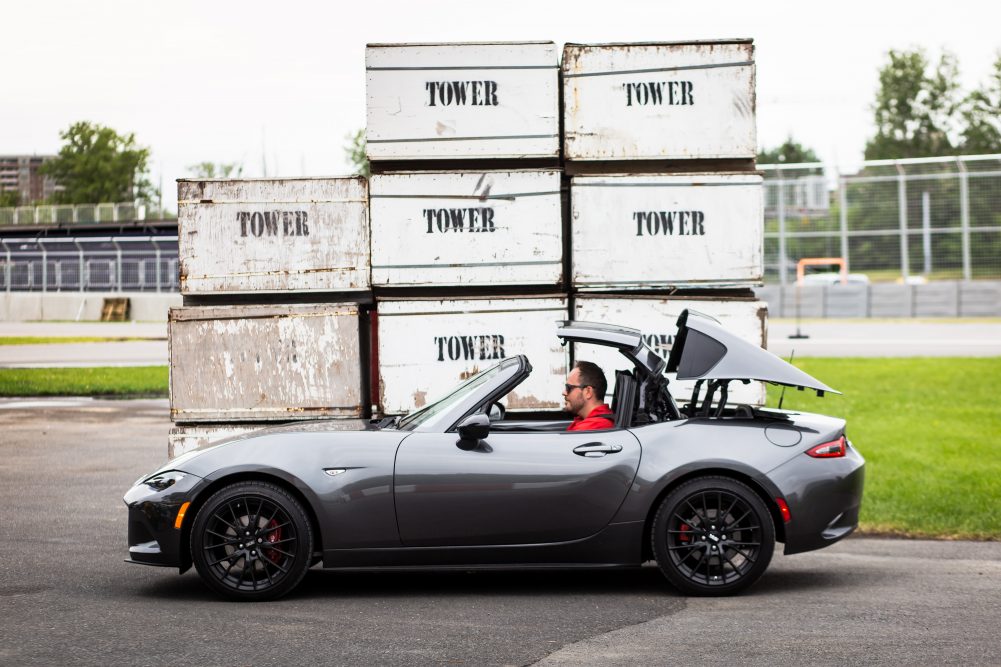 But this time around, when the roof is fixed on the RF, the MX-5 turns into a properly curvy fastback coupe in the likes of a Jaguar F-Type or an old Triumph GT6. From some angles, with its stubby rear end and long hood, the car almost reminds me of the quirky BMW M Coupe from the late nineties. The RF definitely looks much meaner than the conventional ragtop MX-5. 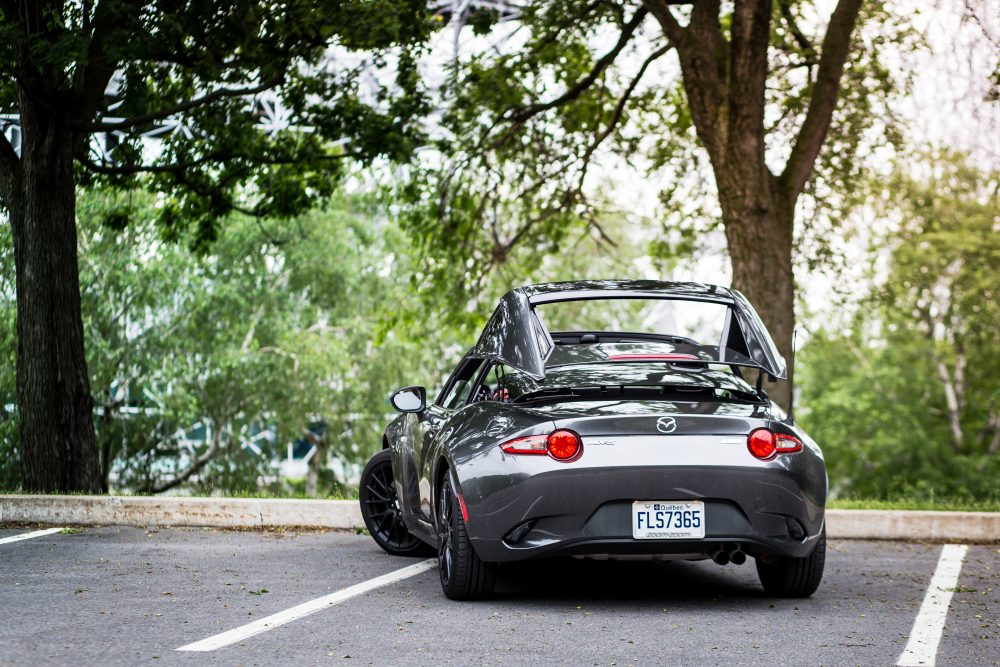 Mazda says RF stands for “Retractable Fastback”, where a two-piece half-aluminum, half-steel, foldable top conveniently stows itself behind the seats electronically at the push of a button, giving way to a substantial opening in the likes of the Porsche 911 Targa. The benefits of this, design-wise, is to keep the car’s fastback profile intact, which not only accentuates the MX-5’s bulging rear fenders, but also helps give the car a more masculine demeanor in hopes of attracting more young, male buyers to the MX-5 nameplate. 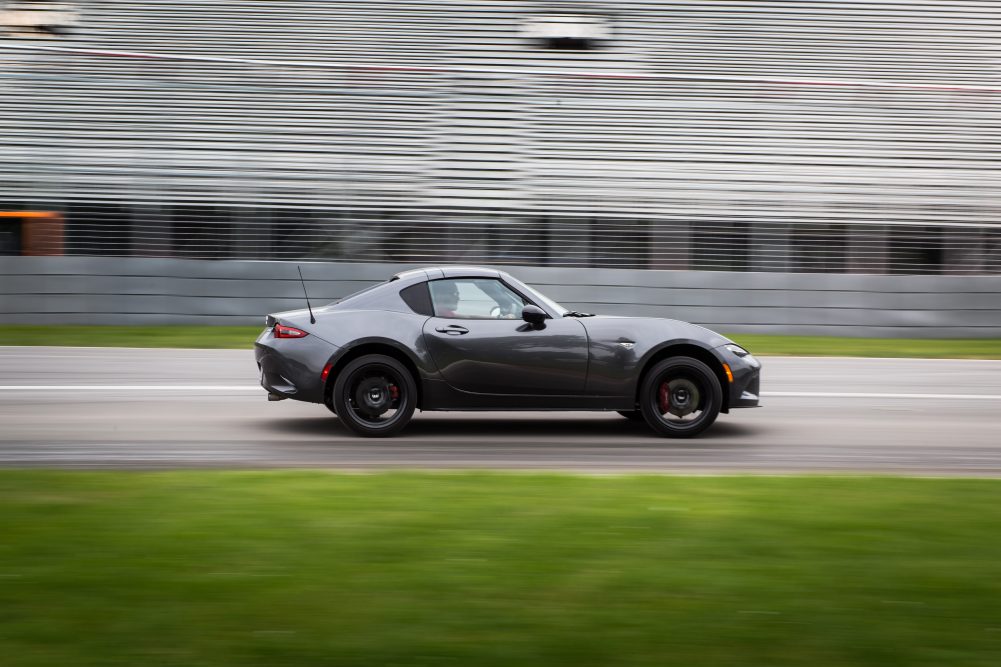 Mechanically, nothing changes for the RF. Under the hood lies the same 2.0-liter, Skyactiv inline four as in the standard MX-5, which is good for a claimed 155 HP and 148 lb-ft of torque – sent to the rear wheels only. Two transmissions are available; a six-speed automatic, like the one I had tested two years ago – an option I still don’t understand for an MX-5.

My RF tester had the slick shifting six-speed manual – thank God – which fits hand in hand with this car like a motorcycle and the rider’s helmet. 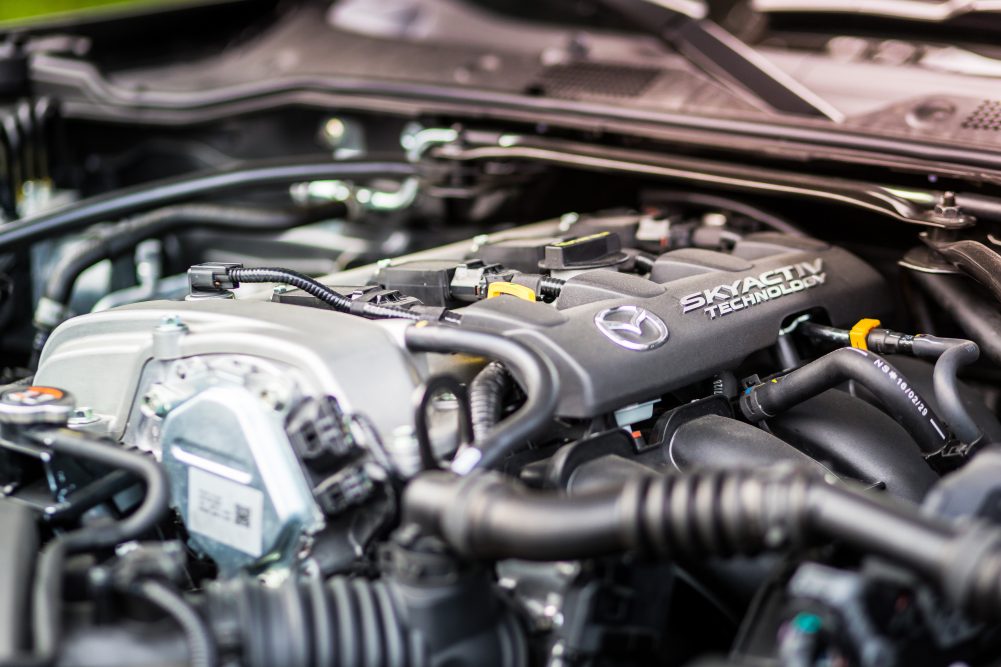 That roof mechanism adds 51 kilograms to the ragtop MX-5’s anorexic curb weight of 1,054 kg. And once stowed, it doesn’t interfere with the car’s already narrow trunk space. Mazda says that since the roof’s extra mass is located mostly aft of the driver, the car’s weight balance is pushed towards the rear, making it even closer to a perfect 50/50 distribution.

Acceleration from 0-100 km/h is claimed at roughly 6.3 seconds, about 0.2 seconds slower than the ragtop. Behind the wheel, it RF feels no slower than its sister. 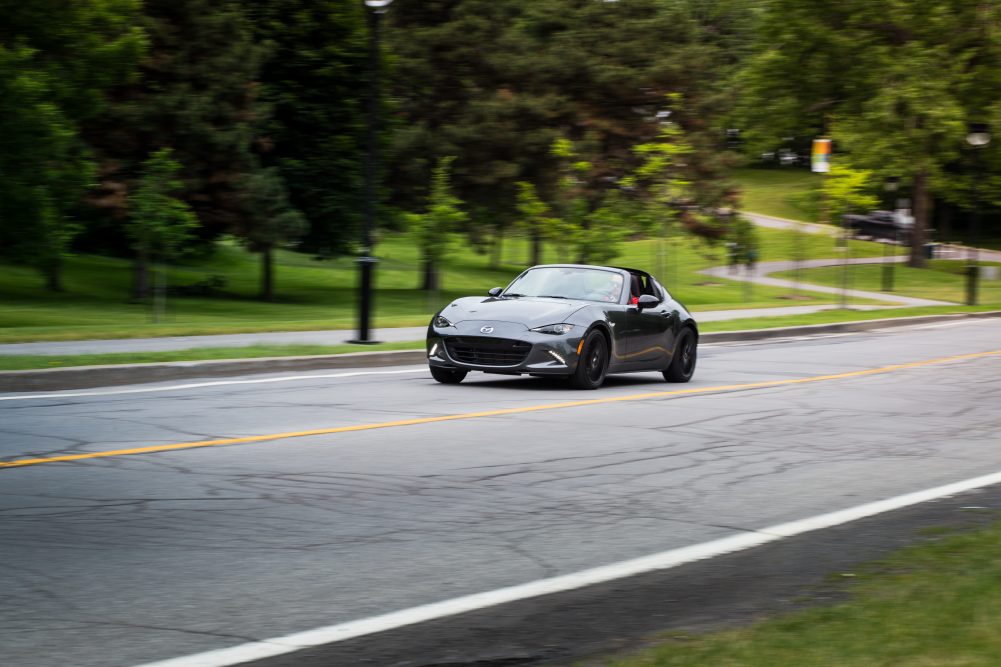 Actually, you’re never really going all that fast in the Mx-5, but somehow it always feels like you are. This is where lies its charm. Very much like the Toyota 86/Subaru BRZ twins, this is a car that puts the emphasis on driving, an art that seems to have been long lost in several modern automobiles. 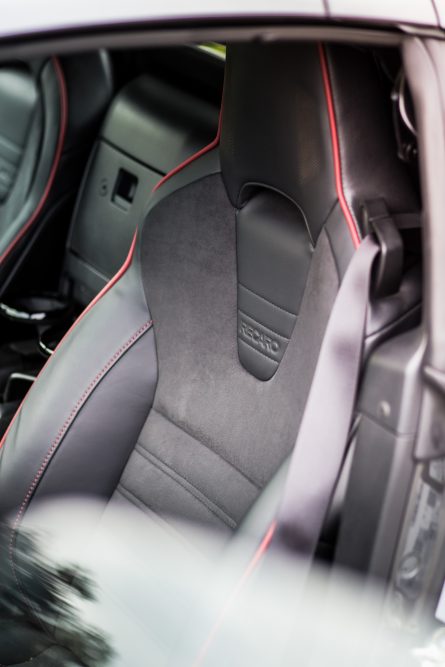 Strapping yourself inside an MX-5 can be quite the acrobatic workout if you’re over six feet tall. The cockpit is snug and confined. But once you’ve found your ideal seating position, those Recaro seats keep you comfortably and firmly held in place. 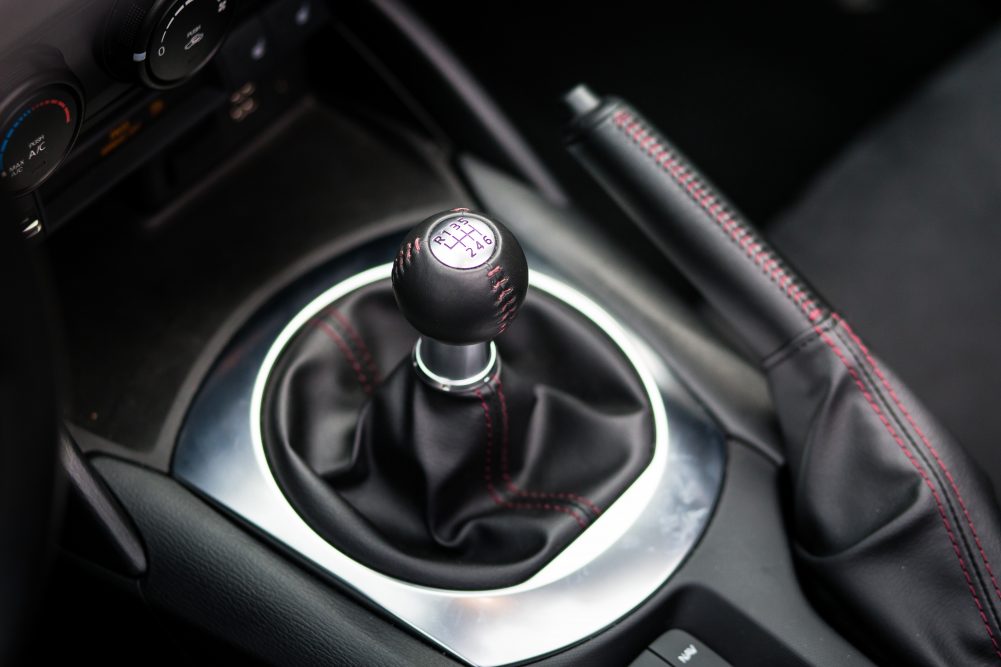 The stubby manual gear lever fits almost naturally in the palm of your hand, and the only form of storage you’ll find in the MX-5 is a tiny compartment located between the seats. There is no glove box. And those cup holders are mostly a joke; you’ll spend more time hitting your Tim Horton’s coffee with your elbow, and have it spill all over the center console rather than actually drink it.

Who needs coffee when you’re driving a car so awake, anyway? 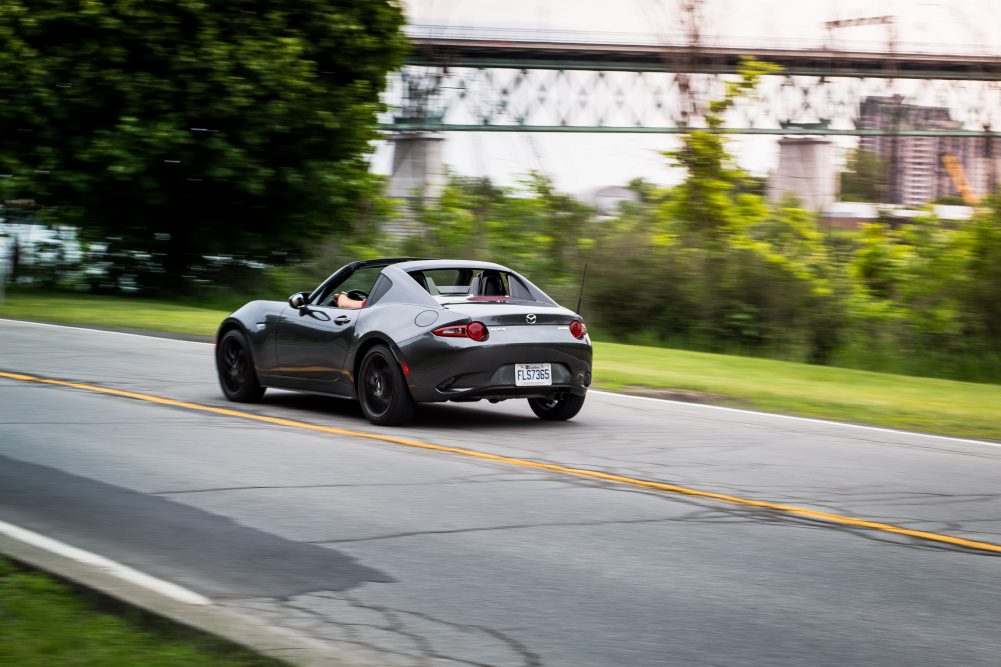 Everything about the MX-5 tells you: “Let’s drive!” There’s absolutely no compromise in the way it was designed. Every inch of the car has been engineered to deliver the thrills, with weight savings applied to even the sun visors, which somehow still remain of good quality even though they’re as thin as a sheet of paper. 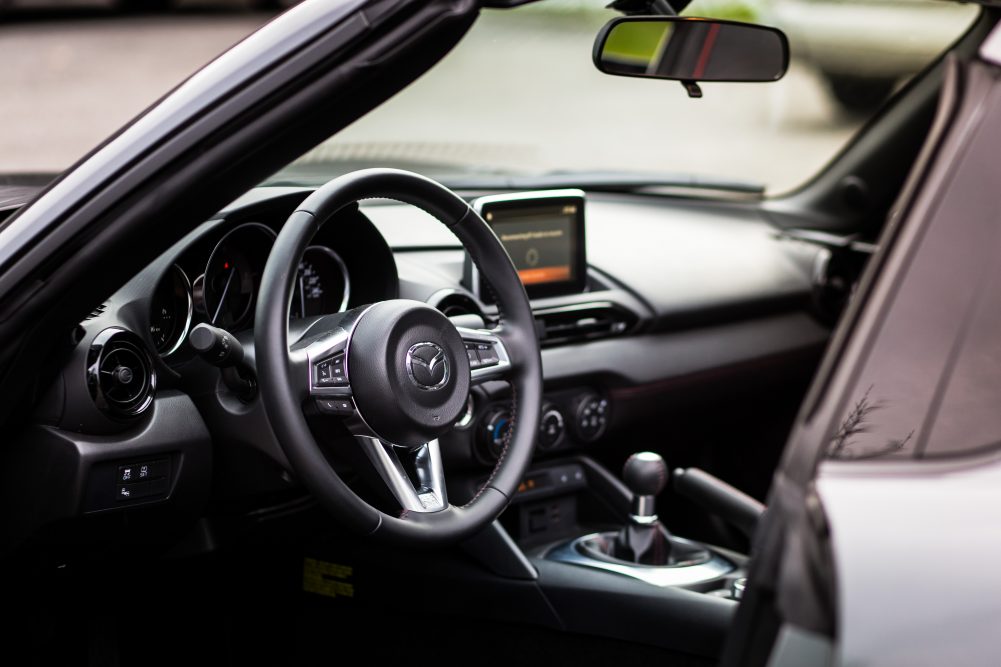 Where the MX-5 impressed the most, is no matter how much interior Mazda tried to remove from the car for weight savings, all the basic conveniences like heated seats, smart phone connectivity, airbags and power windows remain intact. Fit and finish and material quality also remains an MX-5 strongpoint. Alfa Romeo should be taking notes of this for the 4C.

Sitting at just 391 cm, the MX-5 is tiny by modern standards. Parked next to modern crossovers in traffic in this thing makes you feel like you’re sitting in a kid’s Power Wheels car. But it’s absolutely awesome. 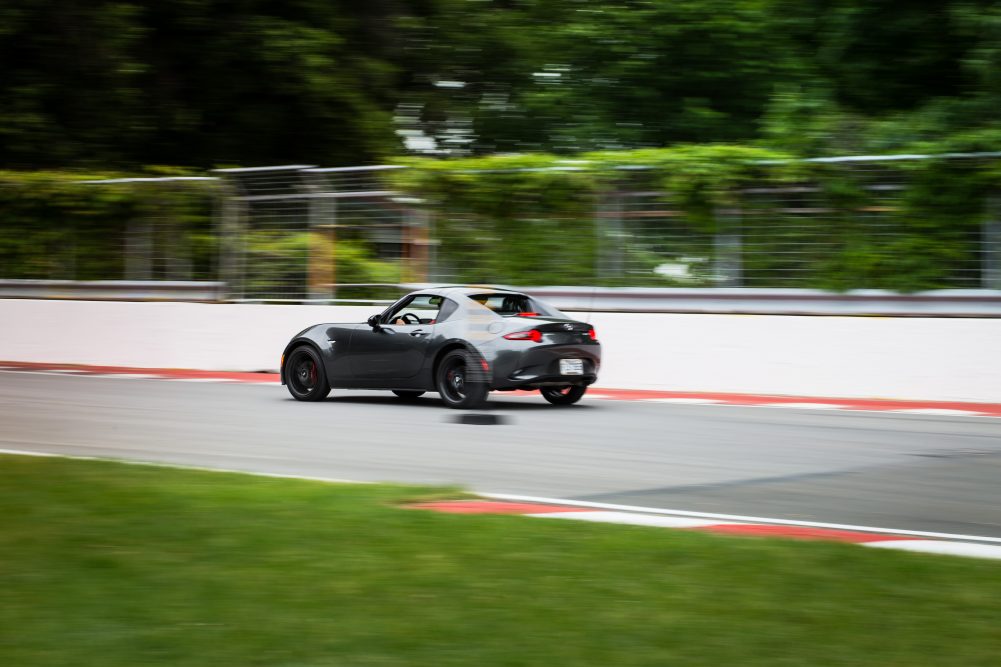 You will corner hard in the RF, thanks to a retuned suspension, which now has reduced flop over the ragtop. The electric power steering system was also given more heft, so you feel more confident pushing the car to its limits, which are super easy to flirt with. There’s no explaining how competent this little Mazda is in the twisties, you have to experience it for yourself. Because it’s so small and so light, the road becomes an entirely different landscape, one which you’ll feel the need to devour every single time you’ll get behind the wheel.

The thing is, the MX-5 was designed to feel fast all the time, so when you’re flogging it hard in a bend, the car exhibits quite a lot of body roll, and those narrow rear tires will quickly run out of grip if traction control is removed. That’s not because the car wasn’t well engineered. On the contrary, that’s sign that the car is a masterpiece.

Like a precision tool, the MX-5 must be driven properly. It will bite the hand of the inexperienced in the form of excessive oversteer. But hand it over to a talented driver, and miracles will happen. 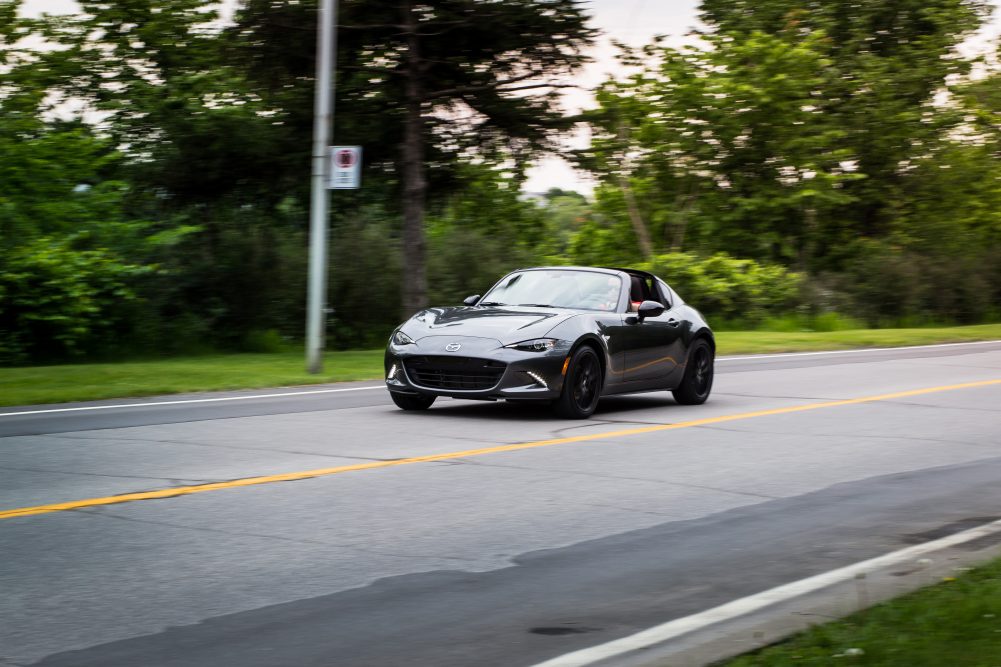 That little four cylinder may look weak on paper, but the car’s power-to-weight ratio is spot on, and all mechanical components connected to it, from the transmission all the way to the throttle pedal, are all sharpened to their utmost peak performance for maximum results. Fun to drive is an understatement. This car is genius on wheels.

Downshifting becomes a blip addiction, revving out the four-pop becomes a habit, and kicking out the rear at a boulevard intersection becomes a regular routine. The MX-5 makes you feel like a hero all the time, even at 50 km/h. And it sounds properly pissed off while doing so. 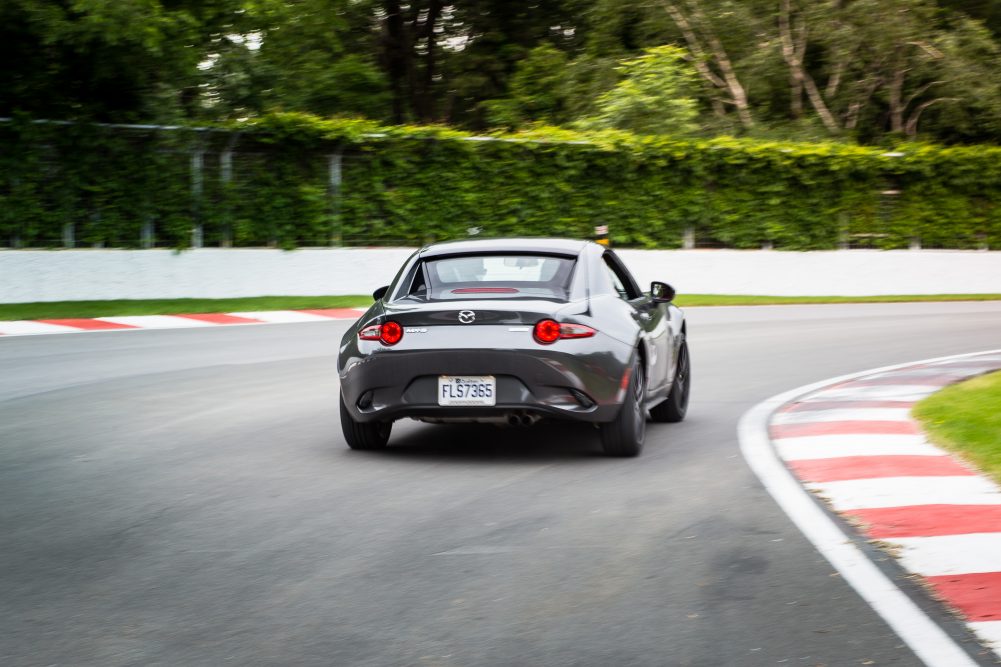 For those who saw the Evo VIII on Jalopnik recently, we were following it in this MX-5 during the photoshoot. The little Mazda had no trouble keeping up, even with half the horsepower. Like I said: miracles will happen.

That’s not exactly cheap. My tester, the GT, which also had the $3,600 Grand Sport Package, including Brembo brakes and 17-inch BBS wheels, tops at $47,707. Ouch, that’s Audi A4 or BMW 3-series territory. For a toy that you’ll most likely only drive in summer and won’t carry more than your spouse and a few grocery bags, that’s a ridiculous sum of money. 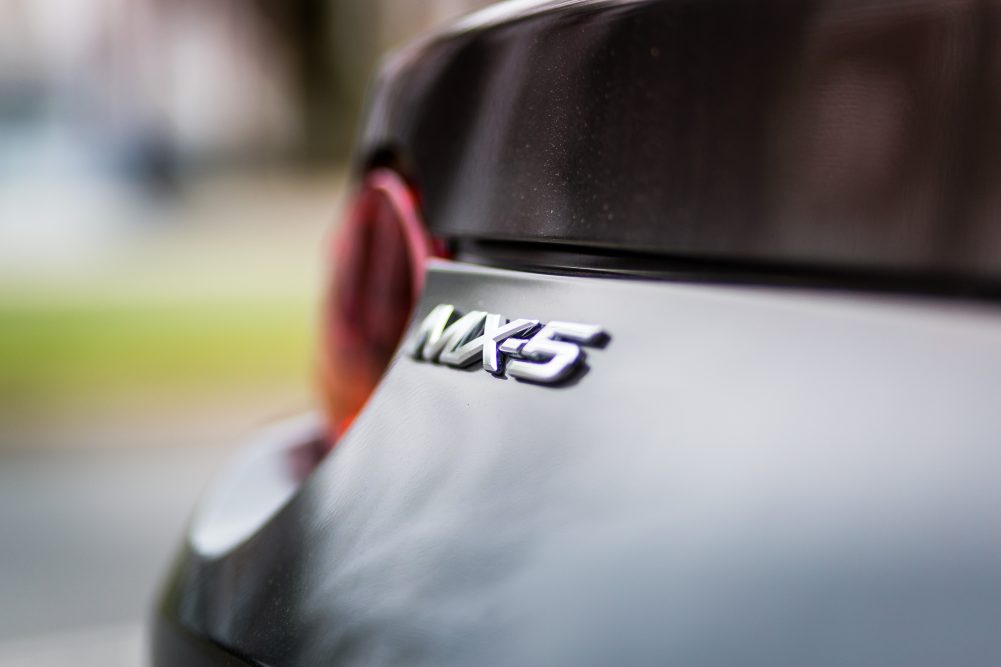 At the end of the day though, you can’t deny the brilliance that is the MX-5. Sure it may be a loud ride, with occasional cabin wind-swirls and tire roll. But the damn thing costs nothing to run. Drop $40 of regular gas in its gas tank and you’ll literally drive forever, I actually pulled real-world 6.5L/100 km numbers. And did I mention that it’s fun to drive? It’s fun to drive.

My final verdict is this: sure you could give the Mazda MX-5 a bad rap for being tinier than your son’s soapbox and that’s its interior is as loud as riding a bicycle. You might deem it useless for not being able to carry the kids and their gear to soccer practice. But the reality is, none of that matters. The 2017 Mazda MX-5 can’t be faulted. Because nobody needs more than this in a car.