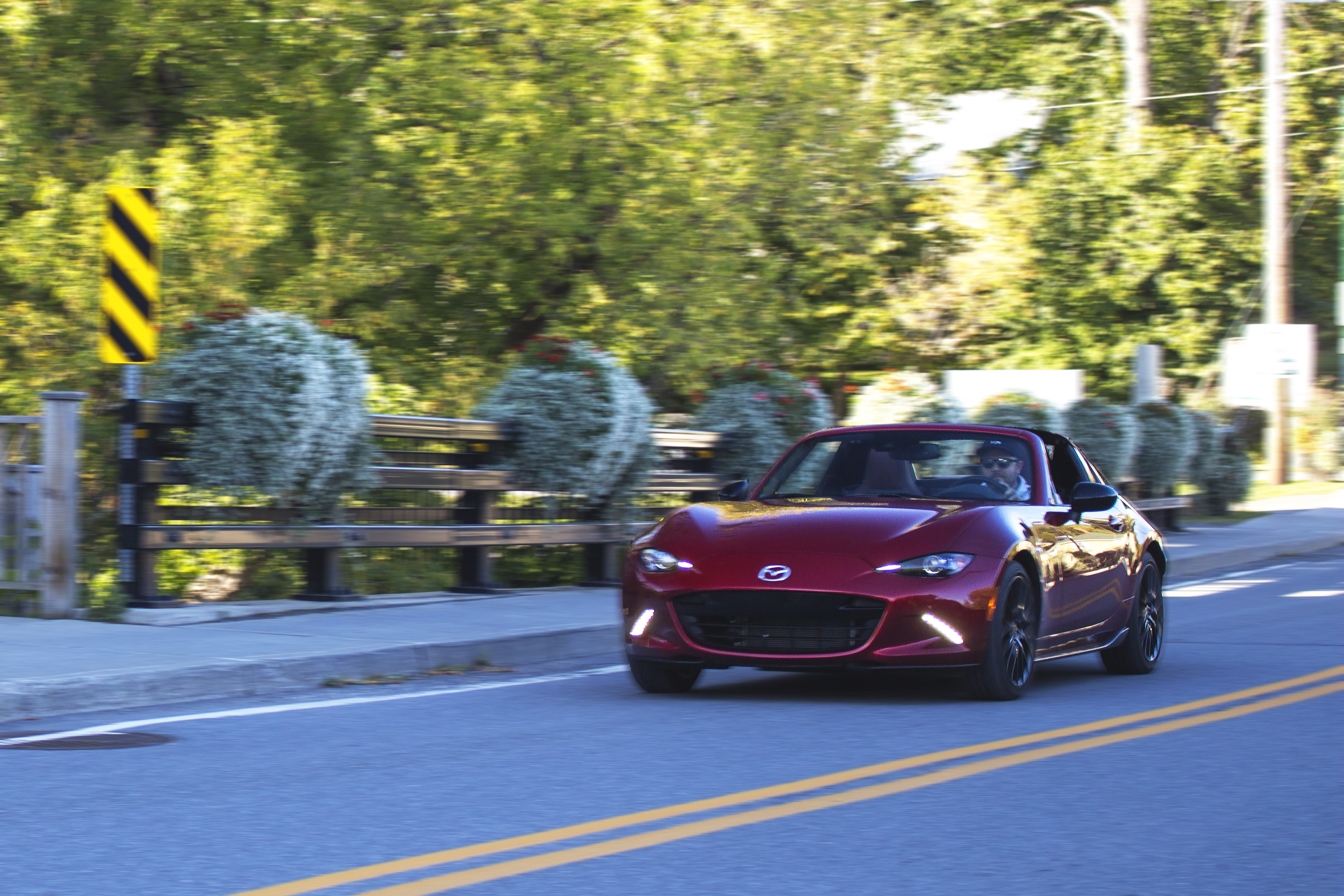 The reason you’re seeing my fat face behind the wheel of yet another Mazda MX-5 is because it gets more power for 2019. Who cares, you ask? Everyone cares. While many will argue that the Miata’s raison d’être was never about being powerful and fast, everyone who has driven one yearned for something more. Well folks, Mazda has finally given us what we wanted.

For 2019, everything we love about the current generation ND Miata stays exactly the same, except for one important element: its engine. I took an RF model out for drive, my favorite of the new Miatas, to see what’s what. 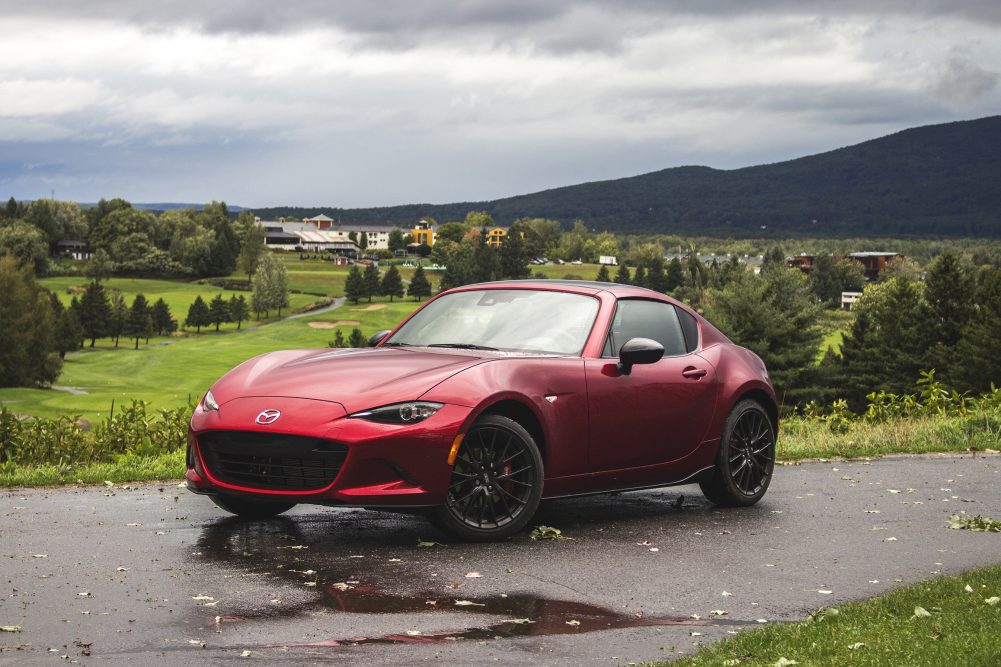 There are some Miata faithful out there complaining over the fact that the recent RF model adds weight to the already svelte MX-5. I say to hell with them naysayers, because the addition of a hardtop not only makes the little roadster easier to live with year round, it’s also arguably the better looking of the two available roofs. 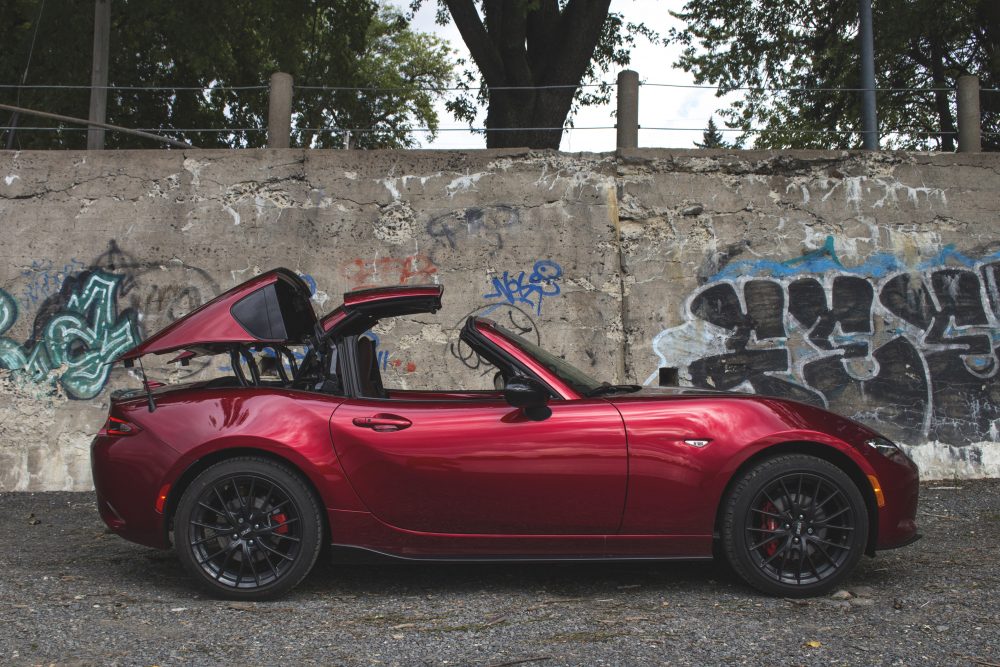 Ragtop fans will tell you the mechanical origami of fine-tuned engineering, what Mazda calls Retractable Fastback (hence the RF moniker), adds 113 pounds to the car’s curb weight and reduces headroom by 1.5 cm. Alright, fine, the RF is heavier. Get the ragtop if you’re not happy. It’s still available, that’s why Mazda offers both, to please both camps. 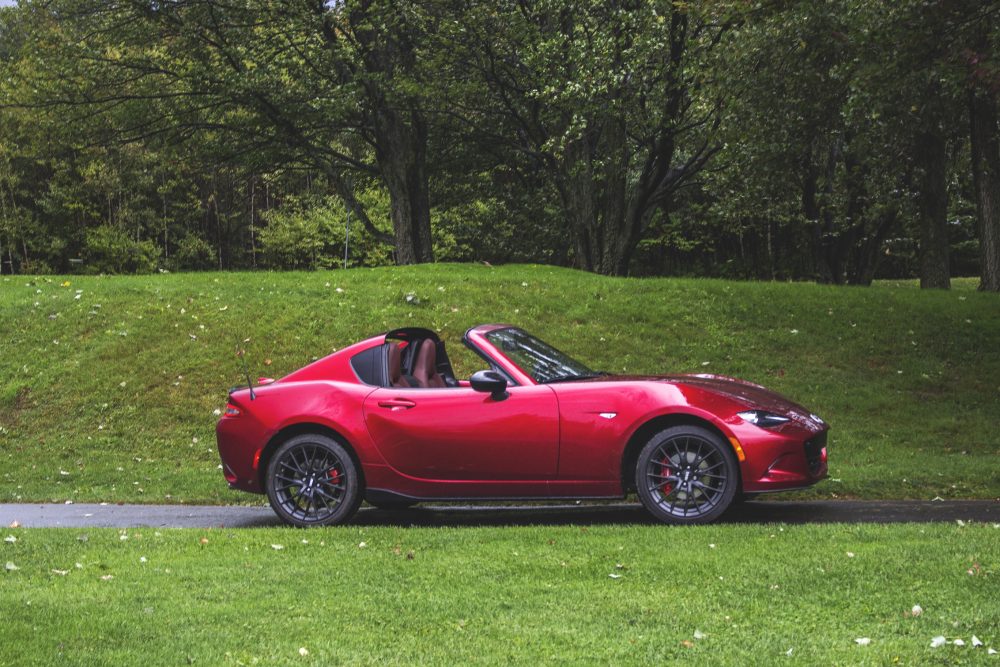 Personally, I care not that the hardtop adds “weight” to this roadster because it makes the cute little sports car look cool, quick, sporty, wide, fat, sexy. All of that. And when the roof is down, you’re still enjoying wind-in-your-hair motoring and an epiglottis filled with bees. Does the RF feel slower behind the wheel? Maybe, but not enough to actually notice. 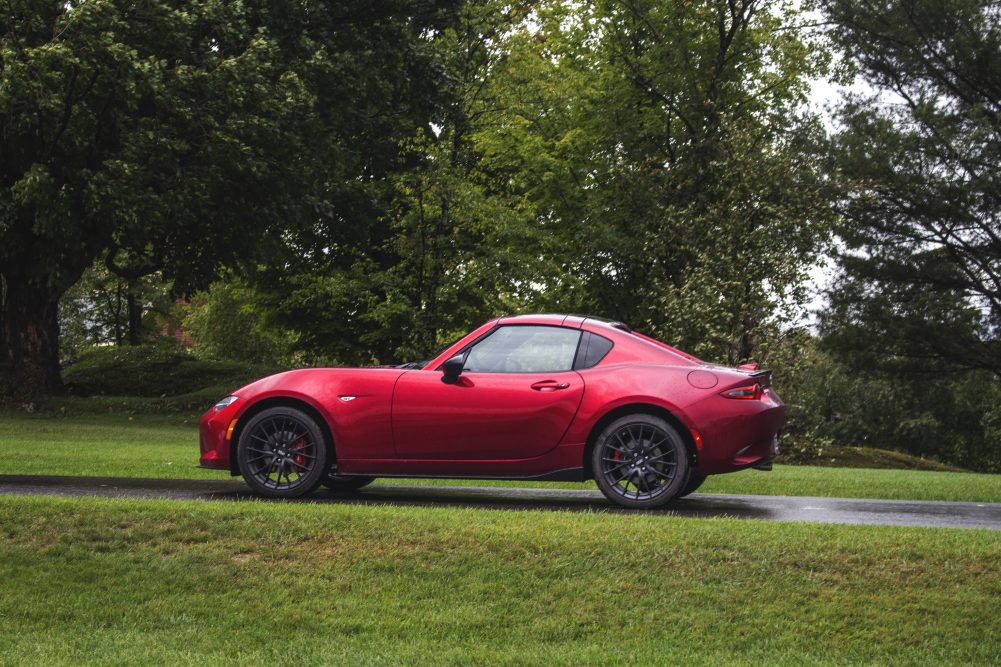 Does it handle in any way or form worst than the ragtop? Nope!  (the two still differ in terms of spring rates and a few other variables due to the hardtop’s added mass). I guess the only downside to the RF is the time it takes for the roof to retract. In the ragtop, you simply grab the top with your hand, tuck it out back, and voilà! You’re in a convertible. 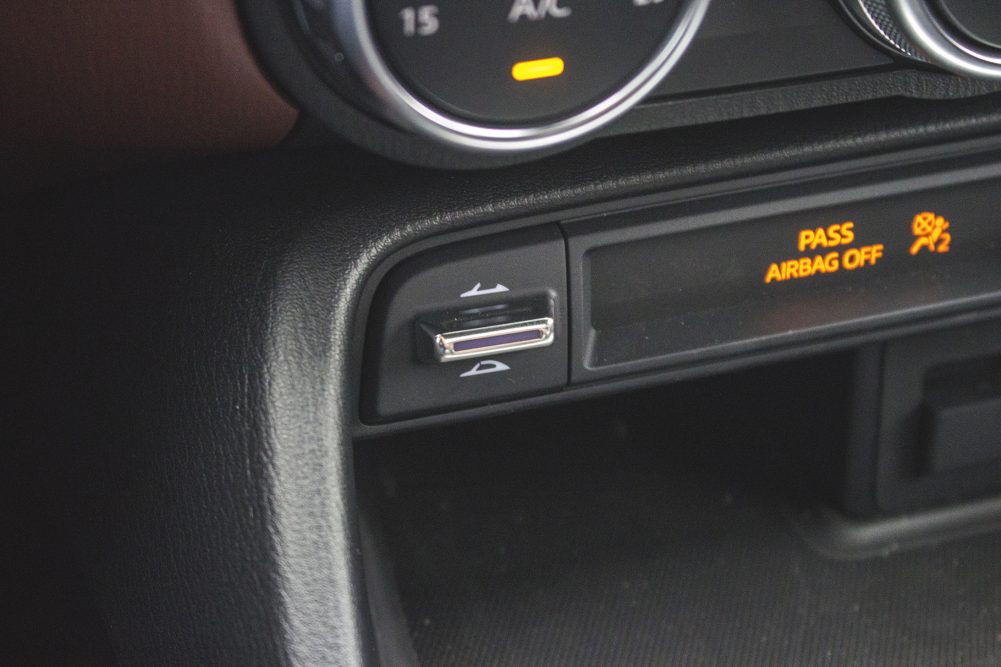 I will admit that the RF significantly hikes the MX-5’s price tag. There’s an $8,000 difference between each car. The standard MX-5 kicks off at $33,807 (before freight and destination), the RF, on the other hand, stickers at $41, 807. If you opt for a GT, like the one you see here, with the added Grand Sport package, which adds a contrasting top in piano black finish, Brembo brakes, Nappa leather seats, BBS 17-inch wheels and blacked out mirrors, your Miata will set you back a whopping $48,707. Yikes! We’re creeping into Ford Mustang GT territory here. 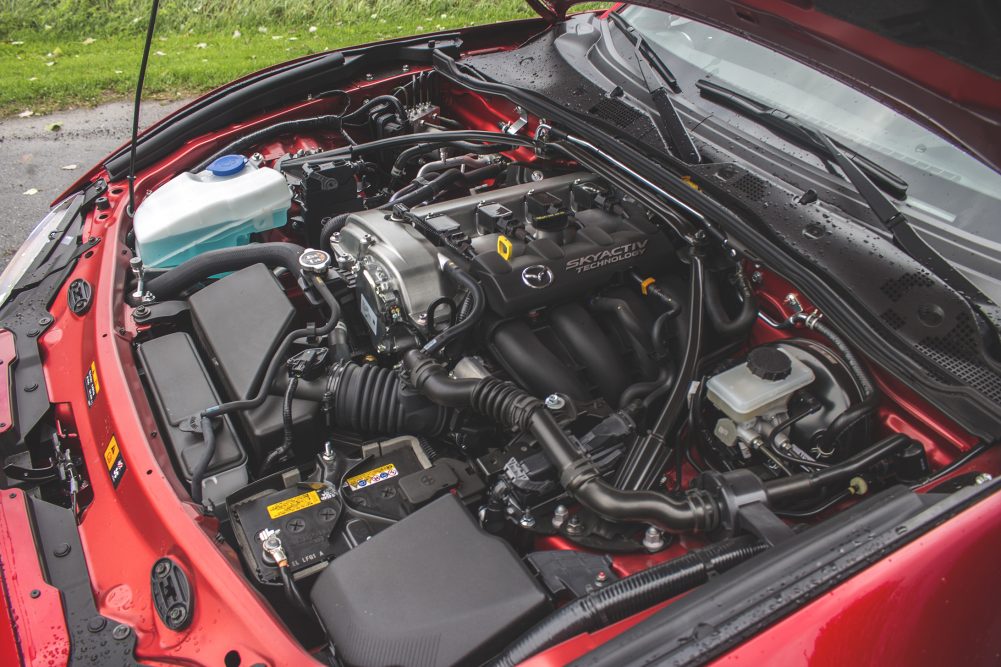 The 2019 MX-5’s newfound power comes from the same 2.0-liter, naturally aspirated inline four as the previous model, except this time, it’s been given the proper sports car treatment. It’s now rated at a healthy 181 horsepower and 151 lb-ft of torque, that’s a 26 horsepower bump over the previous car. Torque also gets a slight increase of 3 lb-ft, but it now kicks in 600 rpm lower, at 4,000 rpm. The engine’s redline was also raised to 7,500 rpm, and max power is now achieved 1,000 rpm higher.

There’s actually an interesting story behind why we’re only getting these changes now, and not back in 2015 when the car was launched. Remember, in other markets, the MX-5 is powered by a much smaller, 1.5-liter engine. When it was time to market the MX-5 for the North American market, Mazda didn’t want to invest in the development of another engine for a specific market, so they pulled the engine out of a Mazda3, placed it longitudinally and bolted the Miata’s six-speed manual gearbox onto it. It was enough to make the MX-5 plenty quick and peppy off the line, but that engine didn’t feel sporty enough, especially when thrashed up there in the redline. 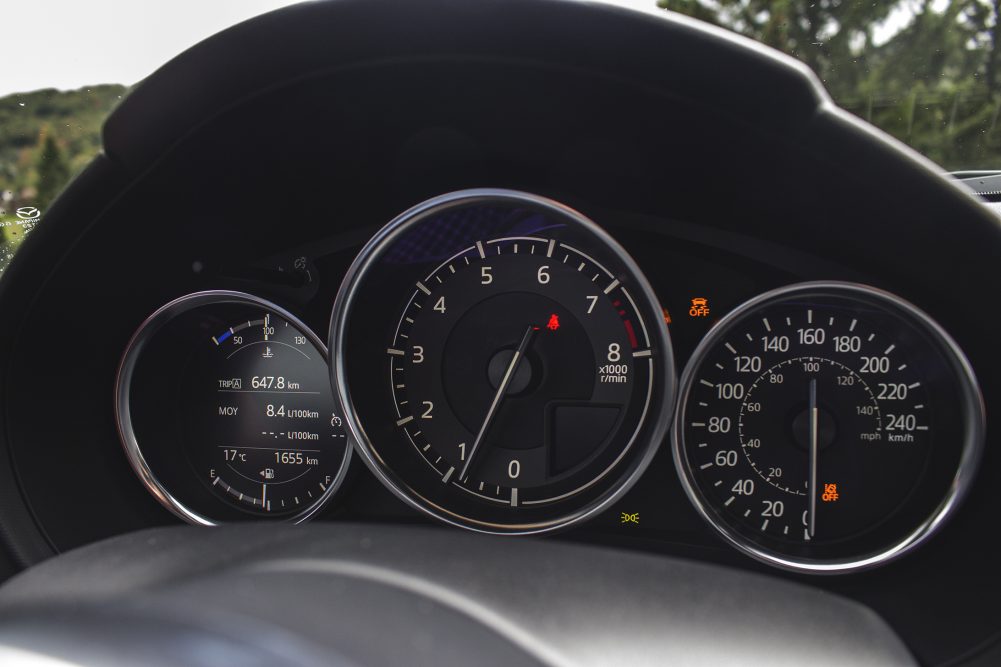 Now, almost four years later, since the MX-5 is selling rather well in North America, there was finally a green light to invest in a new mill. The car actually beat a sales record last year with 12,438 examples sold in Canada and the US combined. So we deserve our own engine.

And the modifications are substantial. The throttle body, intake and exhaust valves, as well as their corresponding ports are all larger. The pistons and connecting rods are lighter, the crankshaft is stiffer, and the fuel-injection system runs at a higher pressure. This is why the engine revs higher now and pulls hard up until the engine cut-off – it actually pulls more once it’s up high in the powerband – contrary to the previous engine which ran out of puff a few RPM’s lower. The 2019 car is essentially a lot more fortified for taking a beating. 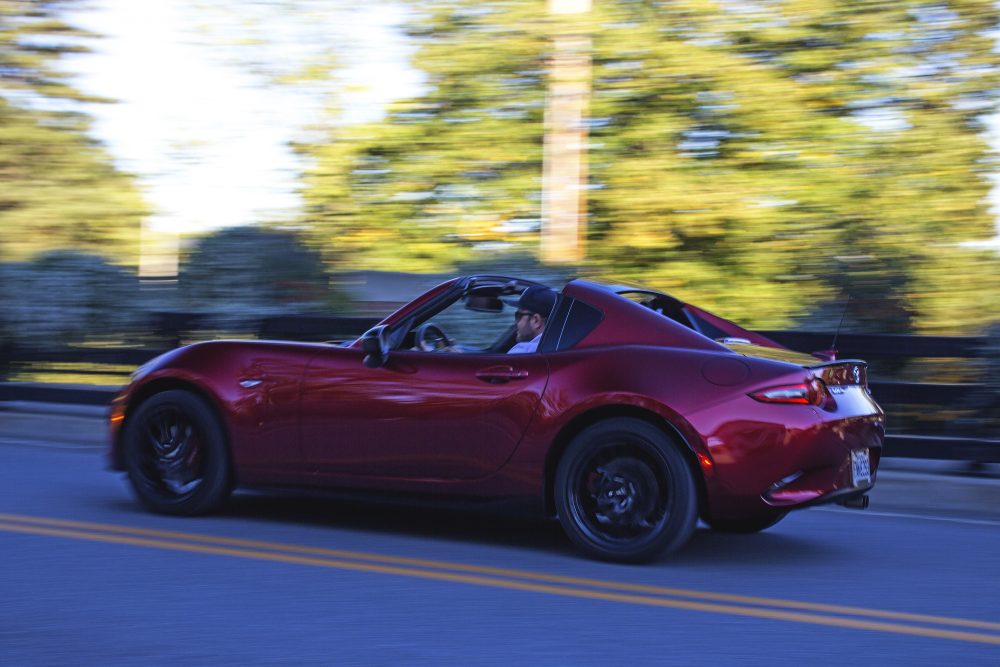 The result is more of everything, making the MX-5 respectfully quick now. There’s slightly improved acceleration, with a 0-100 km/h time of roughly 5.8 seconds versus six seconds. The higher redline means only a single shift is now required to reach 100 km/h.

But above going faster, the new engine has a lot more character. Not only does it rev more freely, the exhaust, which was also reworked, barks with more might. It’s overall more urgent and eager, feeling stronger overall. Finally, the MX-5’s engine is as energetic as its chassis. Thrashing it to the red will raise the hairs on your skin, and in many ways, this update reminds me of the defunct Honda S2000 from the way it loves to scream. 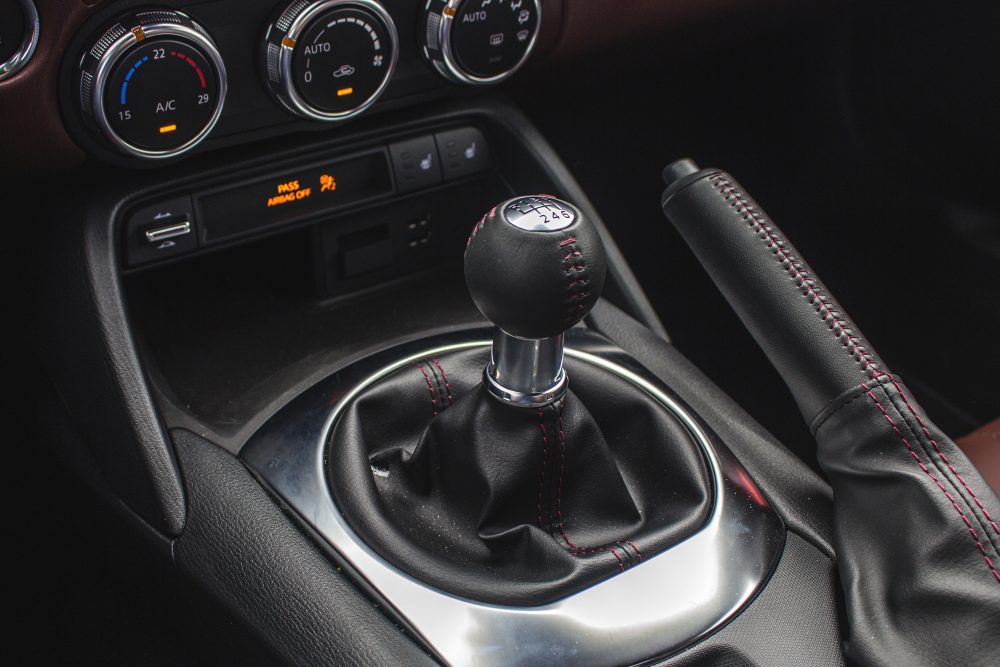 Nothing has been changed about the slick-shifting six-speed manual. Mazda did massage the synchros and the linkage for smoother operation, but gearing was left intact. Handling remains true to the Miata ethos, there’s just an overall sense of lightness and balance from the way this car behaves on the road. It feels like a little spider, gripped at each corner, ready to bounce upon demand. It brakes hard when commanded to do so, and the entire machine feels hard-wired to your brain from how immediate every action is translated into a response.

And because the car is so tiny, your perception of an apex, a gap in traffic, or a hairpin turn is entirely re-imagined, allowing you to do things you could never do with a normal car. 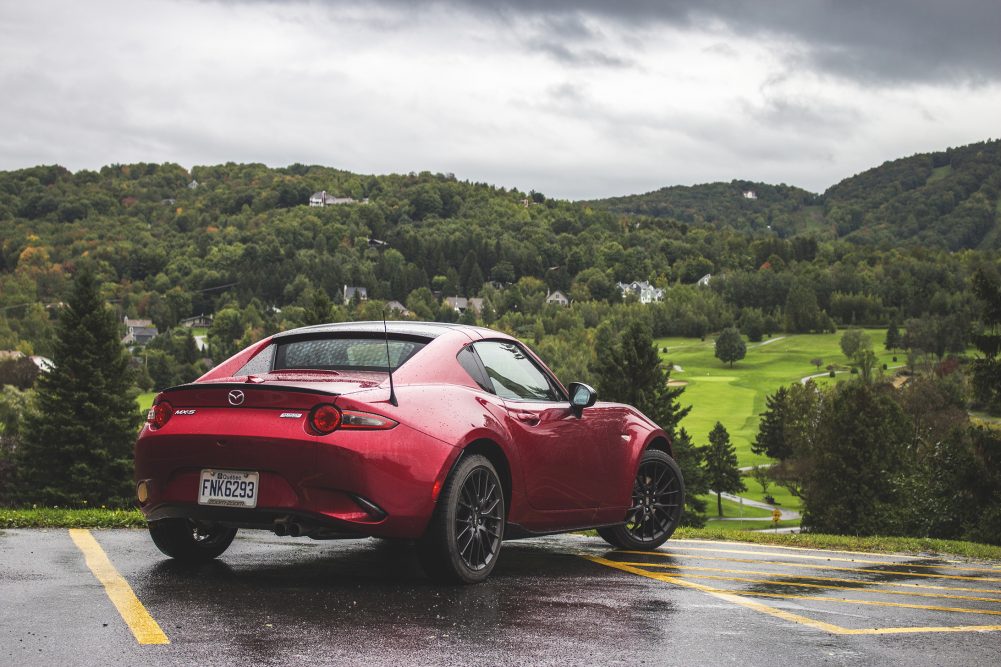 Fundamentally though, this is still a Miata in the proper sense, which means its flaws, while not all that irritable, have also remained intact. The interior is still very cramped, meaning if you’re over six foot tall, chances are you won’t fit in the thing. And while Mazda claims it has improved sound deadening, this is still a very loud cabin at highway speeds.

The cup holders are useless, there’s no storage whatsoever, and the trunk is tiny, like the car. But it remains a nicely styled cabin, with fancy materials, impeccable build quality, and a simple infotainment system filled with common sense. Android Auto and Apple CarPlay will finally be available by way of a dealer-performed update in 2019. 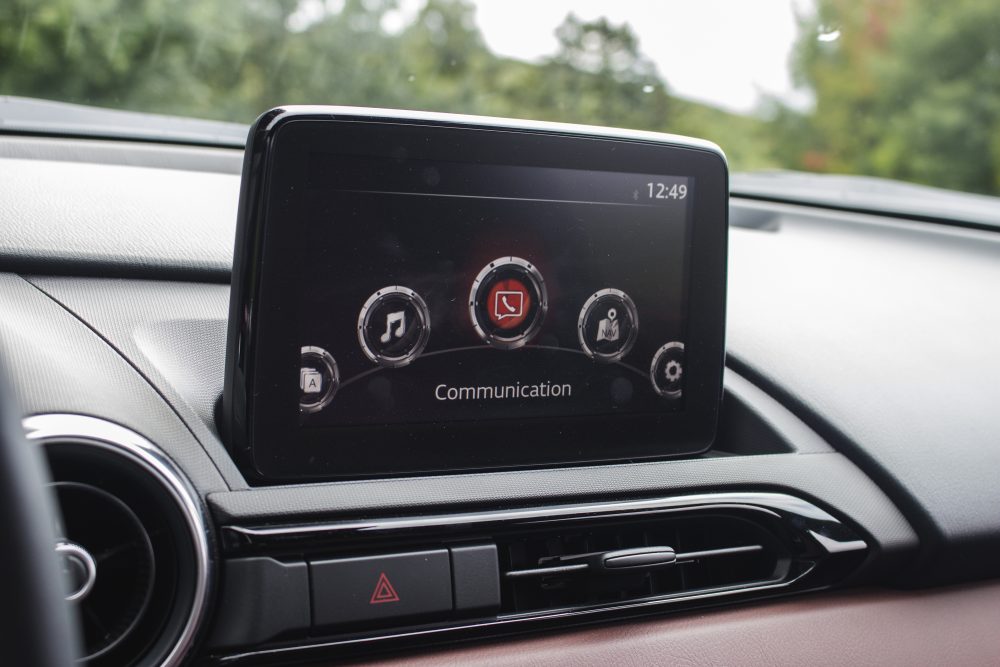 Luckily for tall drivers, the car now gets a telescopic steering wheel. If you’re afraid that this will add more weight to your beloved sports car, rest assured that the mechanism only adds half a pound to the car’s total weight. So who cares? Anyway, this is 2019, telescopic steering is expected in an automobile now. And trust me, I’m tall, and this is a very welcomed feature that significantly improves seating position. 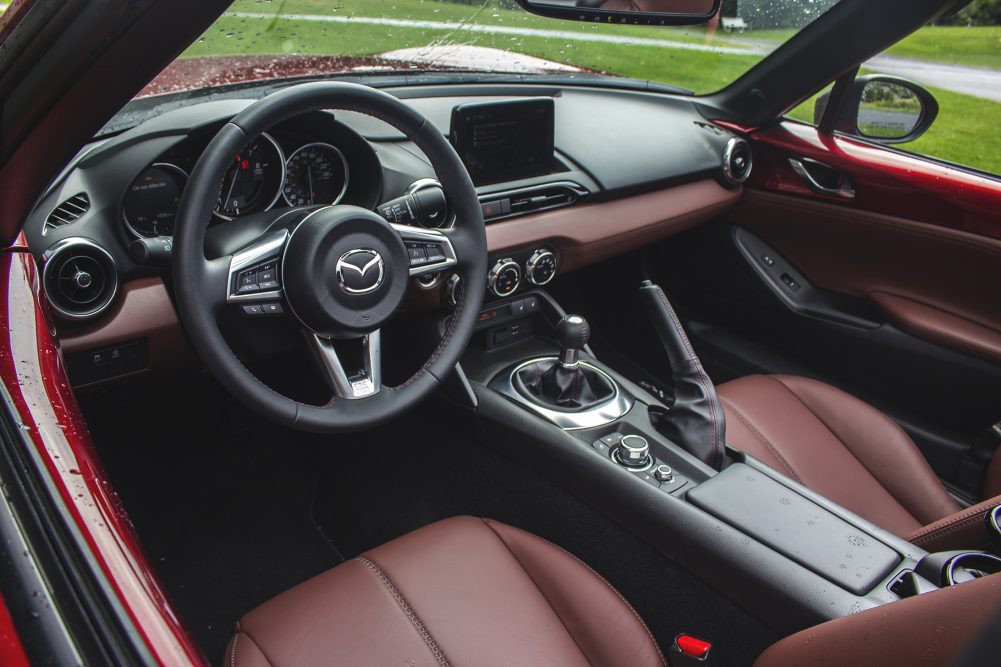 Other updates include new door hinges that allow the doors to open in two positions, instead of three, making ingress and egress easier when the car sits in a tight parking space between two crossovers. Finally, there’s a standard back-up camera. Not that the MX-5 needed it, but because these things are now mandatory on all cars for 2019. I like how Mazda has added it as an afterthought, protruding out of the rear bumper like some sort of worrying growth. 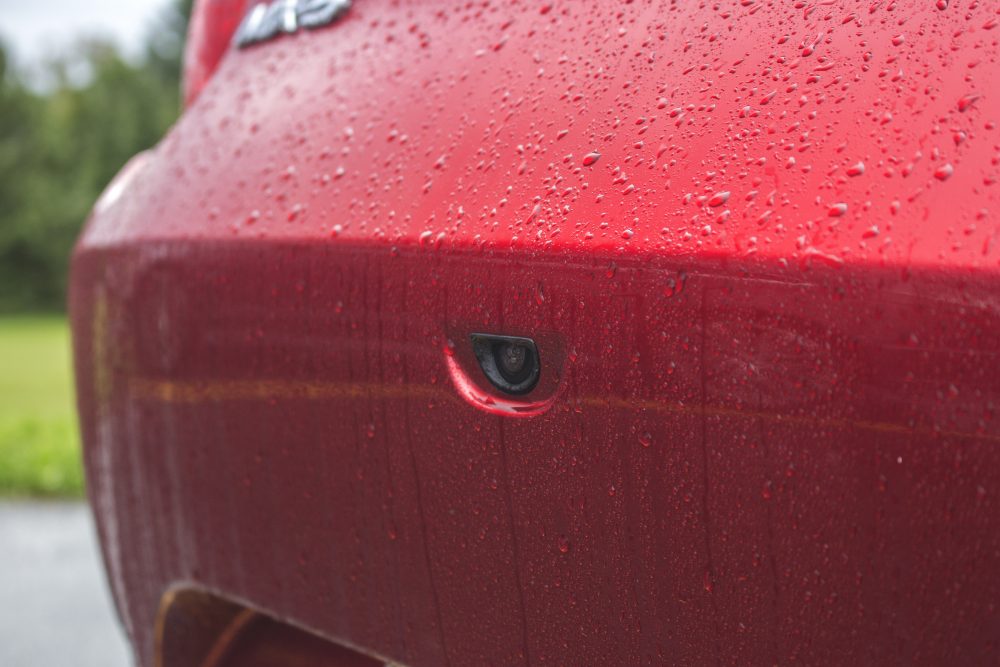 Overall though, I’m happy to announce that the 2019 MX-5 has lost none of its undeniable charm. There are very little cars on the market at the moment that have stayed so true to their original values as much as this one, and we are forever grateful it still exists. What you have here is an immensely fun to drive, capable, affordable, and simplified version of what a sports car should be. Its engine is straightforward, will probably never die, and records an impressive 7.0L/100 km fuel consumption average, even when it’s driven hard. 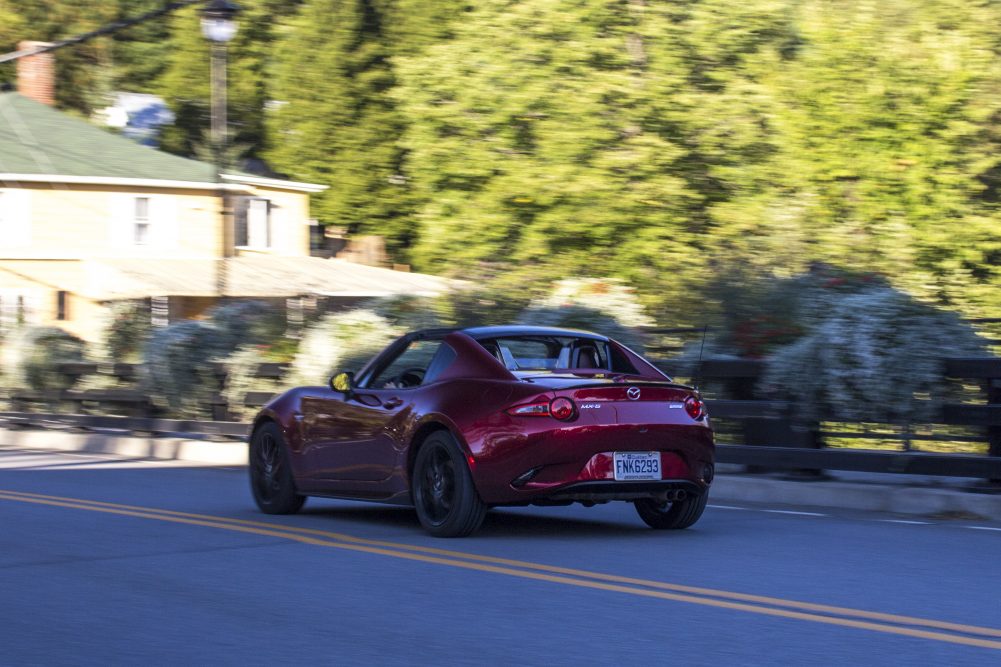 The Mazda MX-5 is a unique proposition, a machine that places driving pleasure above all other considerations. The fact that it’s all coming from a small carmaker, one that takes painstaking care into maintaining an ethos that has become far from a priority in today’s industry, is an accomplishment all on its own.